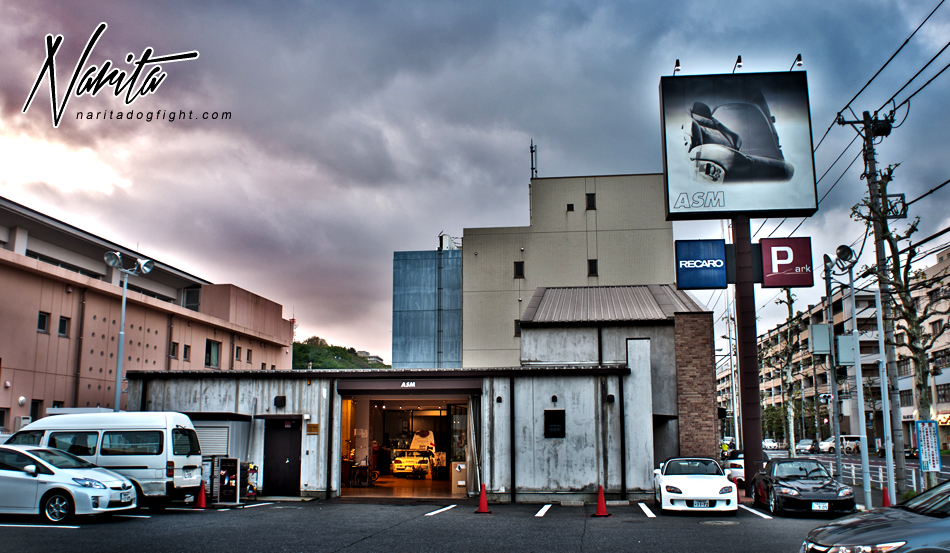 Last time I was in Japan, which seems like ages ago, I stopped by ASM in Yokohama once again to check out what they had hanging around the shop.  This time though, rather than just walk around the showroom, I actually got to have a decent conversation with one of the employees there.  He was a younger guy named Alvin, and thanks to him, I got to get up close to the ASM 1 time attack car.  I’m hoping there’s a trend here so that next time I go back I’ll get them to take it to the parking lot to photograph it better; I’ll work my way up to driving it.  I’m thinking the 5th or 6th visit they’ll let me take it down the street…. Outside the shop there were a pair of black and white S2000’s – perhaps customer cars? Or maybe employee cars.  One was a Type S, but both were equipped with a good deal of ASM gear. Apparently I only got pictures of the rear of the cars. Once inside, I was greeted by the showroom full of extremely expensive and extremely well built original ASM, Recaro, and ProDrive parts.  Like this full ASM built F-series along side the window to the garage. Inside that especially well maintained garage, albeit a rather tiny space, are two lifts, plenty of tools and a nice area to house the ASM Time Attack car. I’m pretty excited that I got to see this car so close, especially before they re-do most of it.  Not many people know, but ASM built two time-attack S2000’s.  One that was intended purely for time-attack (two), and this ‘one’ that was a little more street oriented – although that may all change soon. The rear wing may seem big here, but when compared with it’s counterpart it’s actually quite mild. The interior of this car gives you an idea of what lies beneath the hood.  All business here – looks real streetable.  Oh look, the key… Oh man, I want those doors…but do not want to get t-boned in them… Getting down to the heart of the matter, we have the completely rebuilt F22 that’s been pushed back further into the firewall to enhance the car’s balance. Cool Midland sticker.  Hope you enjoyed and thanks for visiting, and keep up to date with ASM by clicking their blog link on the sidebar!  Can’t wait to get back to Japan later this month ~