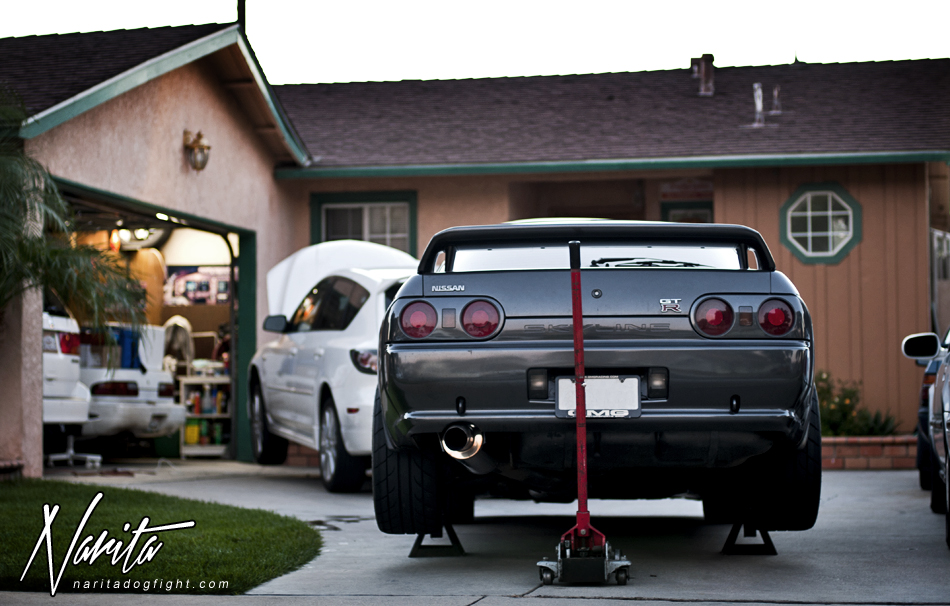 So, last Sunday turned out to be a  little less than typical; well, kind of.  Typical in setting and happening, it just had a little twist on the medium.  We swung by Jay’s house to hang out and watch Hung swap the exhaust of a friends Mazda back to stock.  Jay had mentioned that Chris was going to swing by in the R32 to change out exhausts an radiator hoses also.  Basically we were doing the same thing we do every weekend, but it’s not so often we get to do it on something like this.  Anyway, we didn’t waste much time in getting the car in the air – it was getting dark and we were all hungry.  These Garage Life posts are just a way of documenting my free time with friends and cars, so don’t expect anything clever – just some pics and crappy commentary. When I’m around this car I like to imagine I’m still in Japan.  I think Jay may have the best lawn in Southern California. The gunmetal Gram Light 57 Optimise is a perfect fit for the car. Probably the coolest piece on this car is the hand made Garage Bomber catch can; Aki’s work is insanely good. The exhaust being installed;  Veilside is so cool. We were all pretty hungry by now so the 6 or 7 of us who actually weren’t doing anything went to go get some kbbq.  When we got back things were pretty much getting wrapped up. I love the stock wing on R32’s – it’s almost as if they have a molded gurney flap.  Oh yeah, not to backtrack, but the other surprise we got that made the day great was that Charlie decided to pick up that silver car you can kind of see in the background here. He finally got his E46 M3 and had already installed his KW Coilovers and Advan Model 7’s.  Apparently he had bought the car a week before but kept it a secret until now, which definitely surprised us all.  Super cool though.  He has officially fulfilled his Chinese dream.  So, yeah…good weekend.  Oh yes, I am leaving for Japan in 4 days as well – which is super great.  Maybe I’ll get to feature this R32 when I get back.

Here is a link to a neat website with cute girls holding signs that portray the current time; this one’s in Osaka: