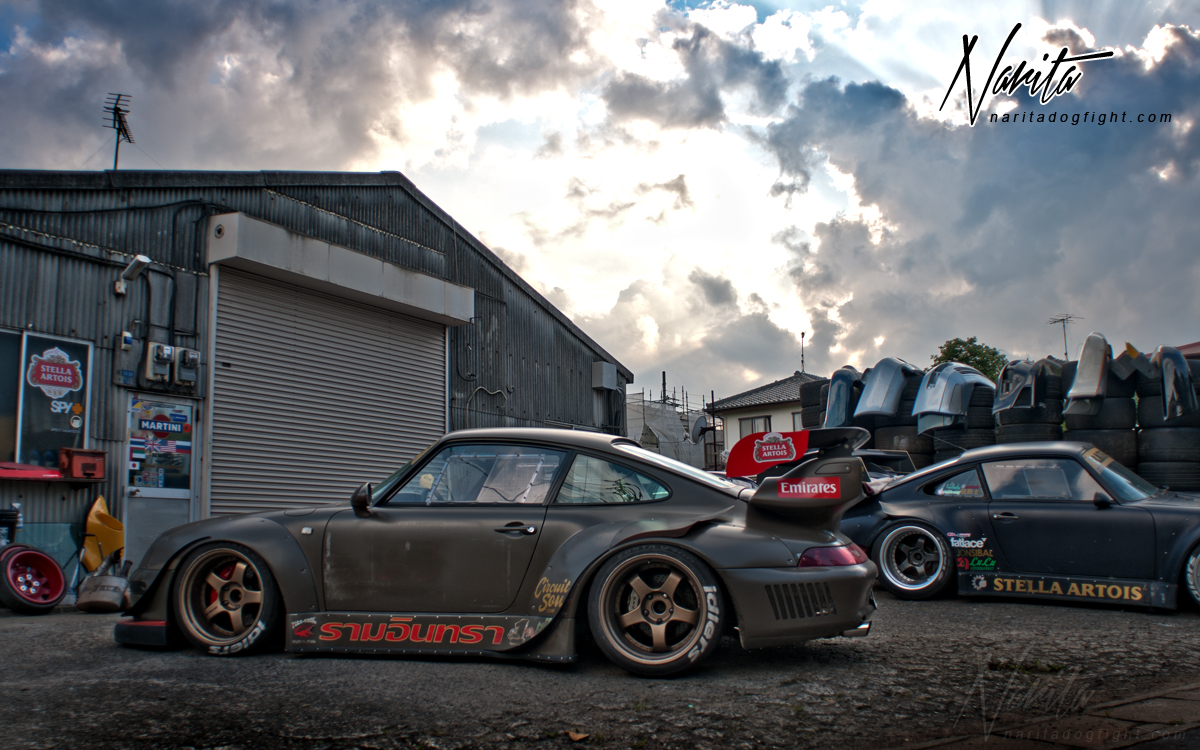 This series of posts may be lengthy to read, and pretty much all about my experience driving in Idlers.  It’s really not something you see too often on this site, as it is not a personal blog, but hopefully it’s something you can enjoy…

I was at work last month when I received a phone call over LINE from my good friend Alex.  Alex owns Circuit Soul in Vancouver; which serves as the Canadian arm of RWB.  The phone call was a surprise, but not really unexpected as we talk fairly regularly.  He asked if I was able to take some time off at the end of the month (July).  I figured he may have been planning the grand opening of CS, or was trying to plan a get together in Japan; but what came next pretty much left me speechless.  Just having ended a phone call with Nakai-san, he asked me if I was interested in driving the 12 hour Idlers endurance at Motegi as a representative of RWB Canada. As you can probably imagine, I confirmed my attendance without even knowing for sure if I could get time off work, or even get a flight.  Next time I had planned on being back in Japan wasn’t until November, so it was rather unexpected.  It had to happen though, and somehow, through the good graces of my very understanding boss, I was able to to get time off work, which was the biggest obstacle for me.  Arrangements in Japan are usually no issue as I have some pretty great friends over there; which I am forever grateful for providing me a second home.  We planned out the trip as best as we could, and before I knew it I was at LAX getting on a flight to my home away from home, Narita. I met up with my good friend Sekinei for the first few nights, and we had a few PA outings and did some shopping at UP Garage (actually I bought a set of R33’s withing 3 hours of landing), ate some good food, hung out with the kids; the typical stuff.  I can’t express how much I like just being in this country; I’ve been so many times, sometime a few years ago, it all started to just feel so…natural.  It’s hard to explain, but I’m very comfortable here.  Saturday came quick though, and soon enough I was on a train to meet up with Matt and Naoyuki and head to RWB in Chiba.  Matt runs the blog Constant Fun, and Naoyuki (a.k.a Noogz) is a CS resident in Vancouver.  Both good friends, and great company.  Our initial plan was to meet Alex (and Park) at Jetstroke to replace the clutch master on Alex’s R32 so we’d have a way to get to RWB and eventually to Tochigi.  Alex was running pretty late though and we couldn’t even reach anyone at the place the R32 was at.  The plan was crumbling pretty quickly.  Eventually we decided that Matt, Noogz and I would head to RWB and meet Alex and Park there later in the evening. When the three of us arrived at RWB fairly early; maybe around 5pm.  The plan was to meet around 6 or 7 so when we arrived no one was there.  Nakai was catching some sleep inside, so we just sat outside, talked, and enjoyed the evening until people started to arrive. It was nice because it gave me a chance to shoot some of the Porsches that were parked in front of the shop.  It was very cool getting to see the turbo build, Rotana, in person. The fact that it’s one of the first turbo builds at RWB makes it one step above the rest – and that wing…oof.  So good. It had been sprinkling on and off in typical Japanese summer fashion which made for a nice backdrop as the sun occasionally peeked through the clouds. Despite my somewhat regular visits to Japan, this is actually the first time I had visited RWB.  Which makes this trip for me that much more unique.  Not only was it the first time seeing these now famous cars in person, and not only was I able to meet Nakai for the first time, but within 14 hours I would be behind the wheel of one of his creations, right foot buried into the firewall, pushing 220 kilometers per hour down the back straight of Motegi.  It was all starting to hit me. We had all eaten the last of Noogz’ granola bars, so we decided to walk to the nearest conbini before things got to hectic. If you didn’t know, RWB is literally nestled in the middle of a neighborhood.  The tiny streets so common in rural Japan surround the shop, and make for a peaceful atmosphere.  That is, until half a dozen straight piped Porsches cruise down the street…

I liked this street, so I took a picture of it. When we finally made our way back, a few regulars began to arrive.  It wasn’t long after that RWB became a hive of activity; preparing the cars for their journey to Motegi, the 12 hour battle to come, and the drive back.  A tall task for the machines, but a task they were up for. More people continued to show up throughout the evening.  Taiwan, Thailand, Holland, Japan, America, Canada; it didn’t take long for RWB to become an international rendezvous point.  It was really amazing to actually experience the reach that this one man has created.  Very cool. Nakai putting some final touches on a few of the cars.  Canards, numbers, decals, tire stencils, etc.  Nakai, with the help of Gary and a few others, took care of all the mechanical prep the day before, so what was left was really just aesthetics and a few aero bits. Around 9 or 930 it started to rain pretty hard, so we all made our way inside the shop.  This 993 is the newest build at RWB; and a beautiful one at that.  This was actually one of the cars I got to drive a stint in and it was nothing short of amazing on track.  I’ll get to that later though. You can see the booth where Noji paints the cars here in the background. Around this time Alex and park showed up with a surprise guest…Hasegawa!  You can check out a cool post on Hasegawa’s RWB Porsche ‘Ayu’ on Matt’s blog. In the midst of all the activity, someone managed to knock over and set off one of the fire extinguishers that was going into a car haha.  There was pink powder every where. Pretty soon it was time to wrap things up and head out to Motegi.  However, not until the cars and drivers were blessed and everyone prayed for a safe, and successful journey. People were snapping away while this guy was doing his thing, I actually kind of felt bad for taking this picture.  This was a great thing though, and I was very appreciative of it.  I think I heard someone mention that the man completing the ceremony actually owns a RWB Porsche…I wonder if that was true haha. Alex and I would be driving the 964 we so appropriately named ‘Rough Soul’ to Tochigi, while Park drove Noogz and Matt in the Alto. Here she is, in all her glory; aesthetics were improved at Motegi.  She wasn’t without her fair share of trouble though.  Soon after we left we had to deal with a couple issues – we’ll see that in part 2. Eventually, some of us made it out of the shop, and met up at a nearby conbini.  I say some of us because a few others went to the wrong one – didn’t really matter though as we were soon stuck with a car that would not start.  This was just the beginning of our caravan from Chiba to Tochigi.  Stick around for part 2 ~ hope you enjoy.

Leave a Reply to 400 Tread Wear No Care Cancel reply