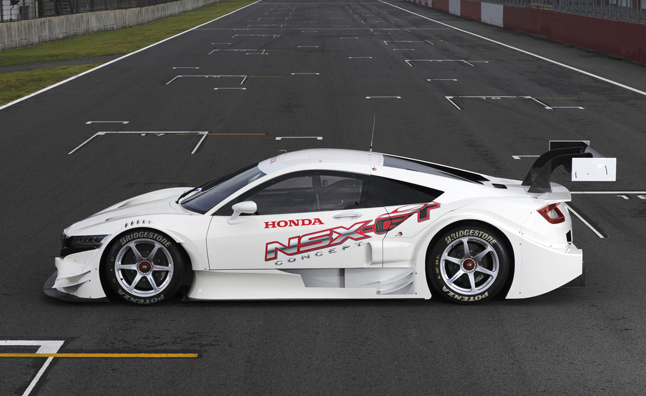 With the 2013 season of Super GT wrapping up this weekend with the Pokka/Sappora Special 1,000KM race at Suzuka, it’s about that time we look forward to next year.  I’ve seen a lot of the new GT-500 NSX and Lexus LF-CC unveiling around the internet lately, so thought it would be a good time to update with some Super GT news. Actually, we’ll be able to see the new concept NSX GT-500 car this weekend at Suzuka, as it will be running in the special event. We’ll have to wait until next year to see the LF-CC in action though.  But there is more to look forward to in the 2014 season than just the new cars; if you remember last month during a press conference with Super GT, DTM, and Grand Am organizations, Mr. Bandoh, of the GTA, mentioned that from year 2014, the GT-500 Class machines of the Super GT will be standardized with those of the DTM’s and operated under new technical regulations, and in terms of preparing for that, this year will definitely become crucial.  Furthermore, with confidence Mr. Bandoh also emphasized that, “The know-how that GTA has built up to now, and with our three makers and teams joining forces to cooperate, overall the season should proceed successfully.” What is in the plan at the moment is that the three – Lexus (Toyota), Nissan and Honda – will complete building of the cars within this July and should be ready for a showdown in the Rd. 5 Suzuka event, as giving a demonstration run over Suzuka’s track. Following that Mr. Bandoh stated to the international press that, these three makers will jointly carry out a Test, and have new GT500 machines lined up at the Start of the season-opener round of next year. [taken from Super GT official website]

These three organizations have planned to meet each year until 2017 until identical technical regulations of the three series can take effect.  Very exciting stuff for international motorsport! According to the announcement, the regular series will consist of the nine rounds on the same six Japanese circuits as this year and two foreign circuits. The opening round is scheduled for April 6th (race day) at Okayama International Circuit and the final round will be held on November 16th (race day) at Twin Ring Motegi. Round four and eight will be the overseas rounds in the Republic of Korea (Circuit TBA) and the Kingdom of Thailand (Buriram United International Circuit) respectively. The one non-series race is planned.

Please note that this 2013 schedule has been filed for approval by the FIA (Fédération Internationale de l’Automobile) and changes are possible subsequent to changes in other world championship races.