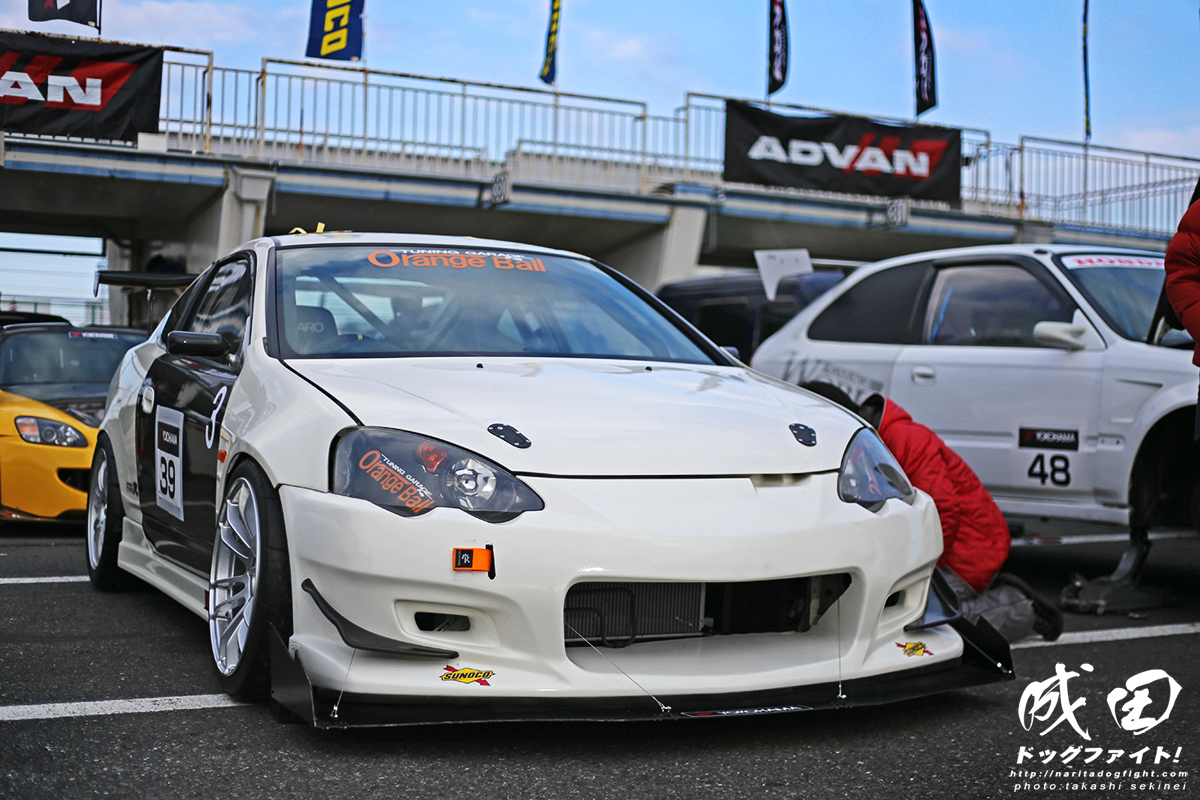 In the first round of coverage of the last Attack event of the year, we took a stroll around the paddock area of Tsukuba and got a general idea of the crowd in attendance.  These are all pretty familiar faces if you follow the site regularly as you’ll have seen them in the Battle Evome coverage over the past few years.

For the sake of not interrupting my Evome ‘profile’ series too much I’m not going to include too much information on each car/driver yet, especially because this is a completely different time attack series.  Nonetheless, let’s hit the track and see some action.  This white Lotus was one of the three or four that attended the event.  It’s cool that there is a niche in Japan that run these cars. Well…this is more like it.  If you’re not familiar to these few drivers’ styles, you’re more likely to see the car in drift through turns than not.  The driving style that Iwata-san (Garage Work) has adopted has gained popularity amongst the other FF competitors in the time attack scene in Japan.  Too speak honestly, it’s very yabai.  This is the last turn in TC2000, and you know how long that turn is…

These guys are crazy… The name of this car’s owner escapes me at the moment but I’ve always been a fan of it.  It’s always good to see EK’s on circuit, especially if they run the Garage Work flag. Another familiar face amongst the scene in Japan. Halfway through the session the Win’s Silvia was struggling for front end downforce, and the newly developed aero shows that in the heat of the moment, these guys will do anything to achieve it.  The guys actually made these add-ons to the splitter out of extra wood they had in their support van… One car that I’ve enjoyed watching progress through the years…as I mentioned in the last post, watch out for the next profile on this car. Hara-san’s FD of Car Shop Glow fame.  No need to introduce this car, we’ve already got it down.  And again, Hara-san, if you’re reading this….EMAIL ME! 【笑】 Note the DKC decal on the wing 【笑】. The owner of this R32 is actually one of Attack’s organizers.  He seemed to have some mild aero malfunction mid-session…drift style… Rear bumper or not, the attack goes on. Close up of the Kyushu-Danji R34.  This car and driver will actually be competing in WTAC this year so expect to be seeing more of this car in the coming months…and trust me when I tell you it’s fast…55.66 fast to be exact.

Thanks for looking, stay tuned for more.  Sorry if this seems rushed and lacking specifics, but I’ll be on a crunch for time until around the end of March.  I’m traveling for work for the next 3 weeks, and then headed back to Japan for a couple days mid March.  I’ll do my best to update as frequently as I can.

Thanks again for visiting!