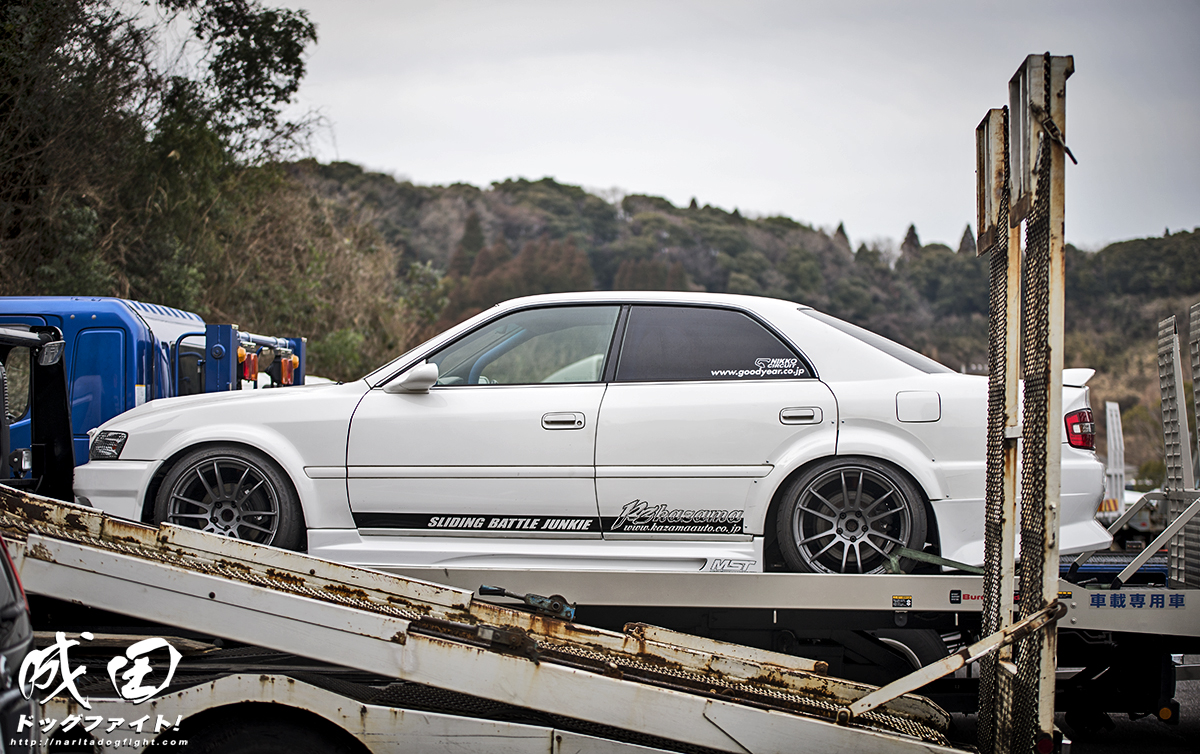 Team Yamada is a team…kind of.  Well, maybe the word ‘group’ would better fit the description.  Team Yamada is a group who organize じゃんけん (Janken) events in Japan.  Janken, if you’re unfamiliar with the term, is the Japanese equivalent of ‘Rock, Paper, Scissors’.  These events happen to be held at drift courses, and all the people who attend them just so happen to drift as well.  So, before the Janken starts they drift throughout the day.  At the end of the day, some people in the group will be forcefully challenged by the masked man to a game of Janken to win prizes or to be shunned by all.

Does that make sense? It shouldn’t.  I didn’t get it at first either; until I remembered I was in Japan. Anyway, we pulled into Mobara on the cloudy weekend morning to see some cars already having at it on course.  I walked over to the back though to grab a couple pictures of this car.  Somewhat similar in styling to the X100 I posted earlier. Although I didn’t see it out on course, it sure looked good on the flatbed.  Love the way the Gram Light 57Extremes looked from this angle. Back in the paddock the Masked Man made a brief appearance to announce some stuff; probably about the Janken game. A good sample of cars that were running that day. I climbed up on the hill that sits behind turns 2 and 3 at Mobara to watch and grab a couple shots. XD9’s have grown on me over the last year for use on drift cars.  They’re an incredibly heavy wheel, but they fit sedans so well. This guy was fucking serious.  I mean…fuck. He was pushing hard.  So hard in fact that… (new watermark? random.) …he went off several times.  Especially on turn one coming in off the straight.  A lot of guys go off here it seems if they carry too much speed.  It’s a pretty shallow corner. Every time he finish a pass on the last corner we’d get smothered in smoke.  Here’s a picture of Matt telling Park how to take a picture. A couple other people dirt dropped that same corner throughout the day. Some didn’t fair well after going off. There’s that watermark again…wtf.  This S15 was pretty cool. Our good friend Fuku-chan was there too!  Always good to see him, although, a bit strange to see him on a circuit and not on the street. There were a couple 86’s there as well – this one looked pretty damn cool.  Meister CR-01’s up front, and some mesh wheel in the back. I made a fake tilt-shift from a picture I took on the hill. Some people started packing up to go before the Janken started. Pro-Shop Wave car that I featured awhile back. When the Janken games started things got a little heaty with the masked man trying to grope on of the gals.  Not really though, it was all in good fun.  These guys are all friends. Even Mickey and Minnie were there to perform lewd sexual acts for everyone’s entertainment.  All this is going on during the Janken game and they have a table of prizes to win; snacks, car parts, stickers, etc.  It’s super fun… …and that’s basically why Team Yamada exists.  To have fun.  When I said I didn’t get it at first it was because I was looking for an end means to all of it; a point for it to be held.  Well, there is no point to it, it’s simply to have fun.  To gather friends, to drift, and to have fun.

One of the team members was gracious enough to give us some Team Yamada decals – I don’t think I’ll ever use them, but there nice to have in my collection.  I look forward to going to more of these.

I’ve posted a lot of drifting this week! I’ll be back Monday with the continuation of HKS Premium Day and the Option Super Lap.