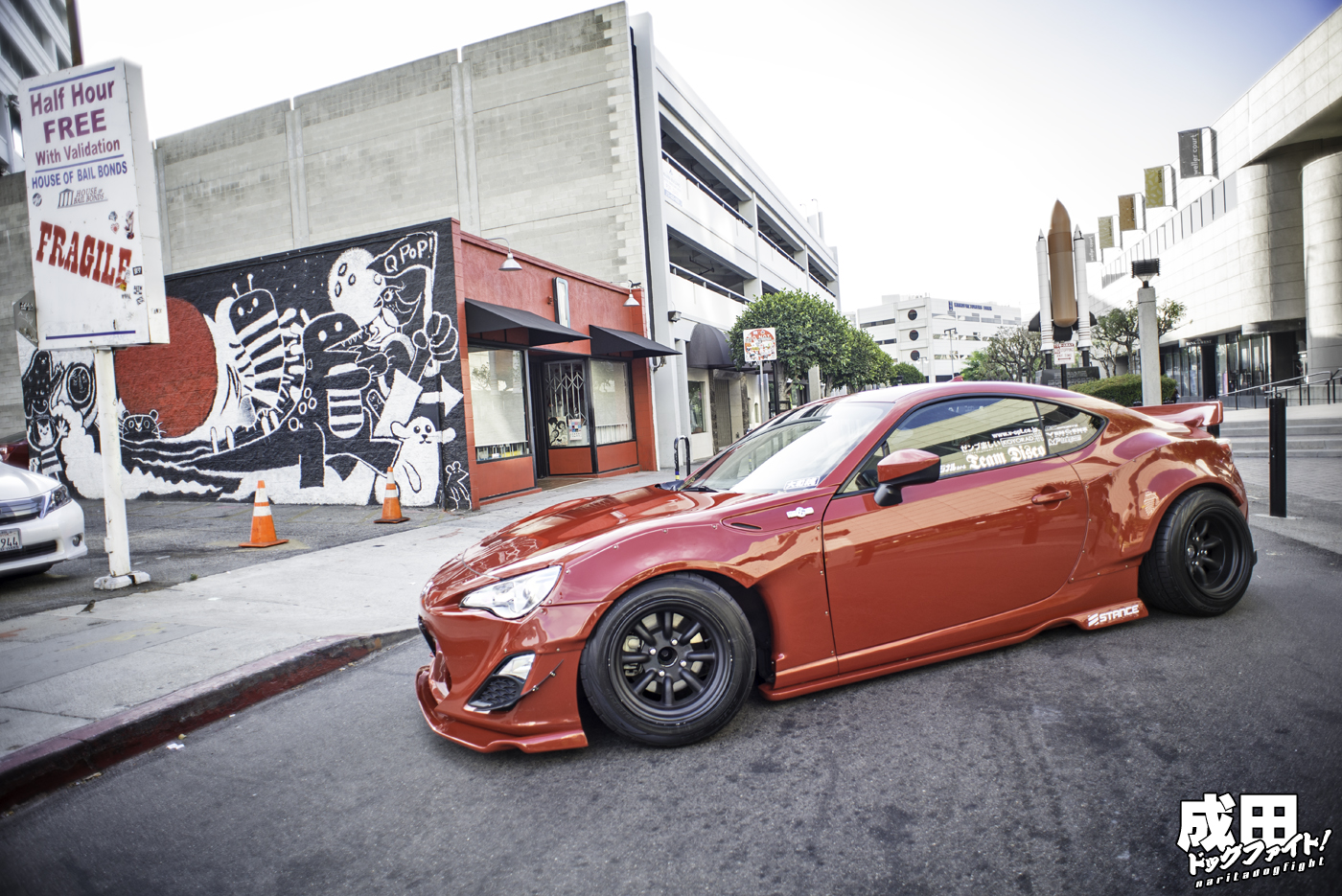 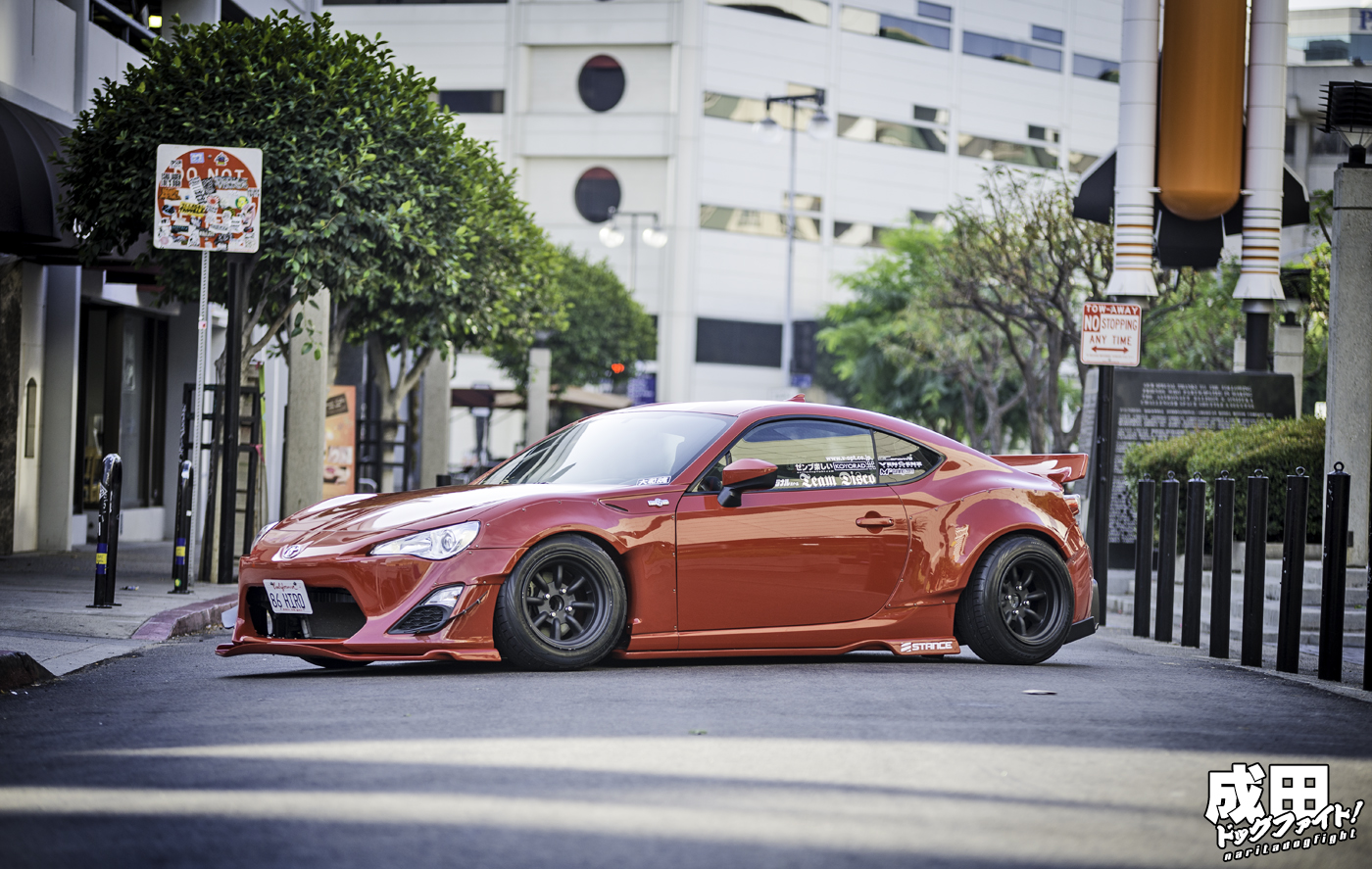 The last time I talked to Steve in person was at Autocon back in…April, I believe?  Anyway, for the 30 or so minutes we chatted, he had mentioned wanting to put his 15″ Watanabes that were on his Corolla, on his FRS; unfortunately the lug pattern was wrong.  Not wanting to run conversion spacers on the stock body, he had shared his idea of getting new hubs machined to fit the four lug pattern of the RS’s; a rather costly solution, but a solution nonetheless.  Fast forward to last week and you can clearly see the end result of Steve’s ideas, albeit a bit different solution than originally planned.
The Rocket Bunny kit, a decision that not too many people knew Steve had made, was a surprise even to me when I saw it.  When I asked him why he didn’t tell anyone of his plans he simply replied, “I don’t know, I didn’t really feel like I needed to tell anyone.”  A response you don’t hear to often in a time where the need to be acknowledged for your acts is deemed as being important.
With the Rocket Bunny flares providing much needed room at the corners, Steve was able to use a conversion spacer to get the RS’s to fit snuggly inside, giving his car an extremely unique look in a world of repetitive RB kitted builds.  Plus, the conversion spacers give him the option of swapping the RS’s back onto his Corolla in favor of a 5-lug wheel; best of both worlds. 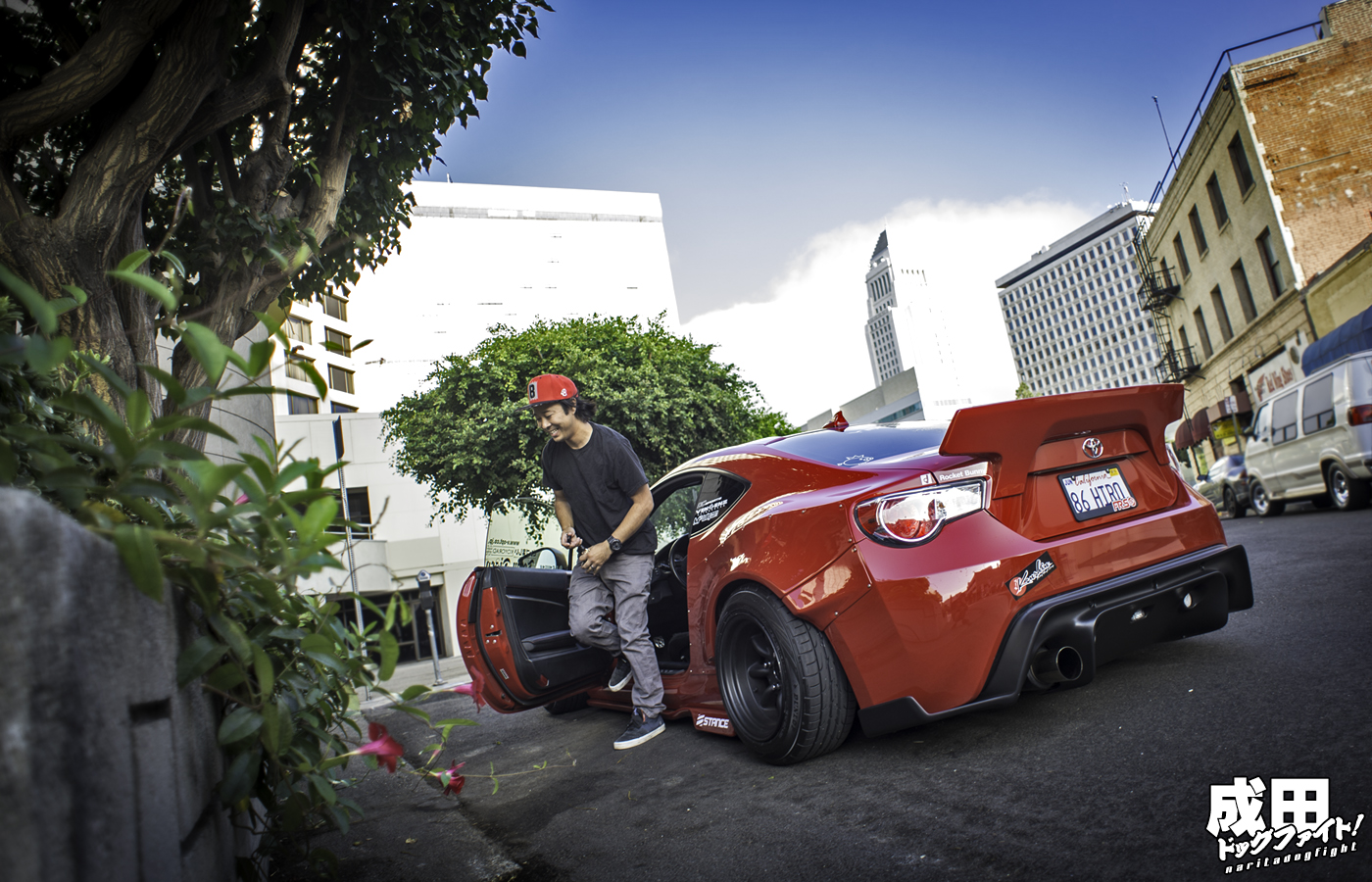 To say that Steve is a reserved man wouldn’t be an understatement.  There’s a quality of patience in him that leads to decisions being made from certainty, rather than from haste.  Combined with a background in graphic design, you can get an idea of why the cars he builds are on a different tangent than most.
Steve was born here in Los Angeles, growing up in South San Gabriel.  He’s happily married to his wife Jennifer and has two of the greatest kids ever; Hiro and Rika.  Actually, Steve is planning to give the FRS to his son when he grows up (barring that his father’s taste in cars is passed down along with his good looks); hence the license plate ’86 HIRO’. 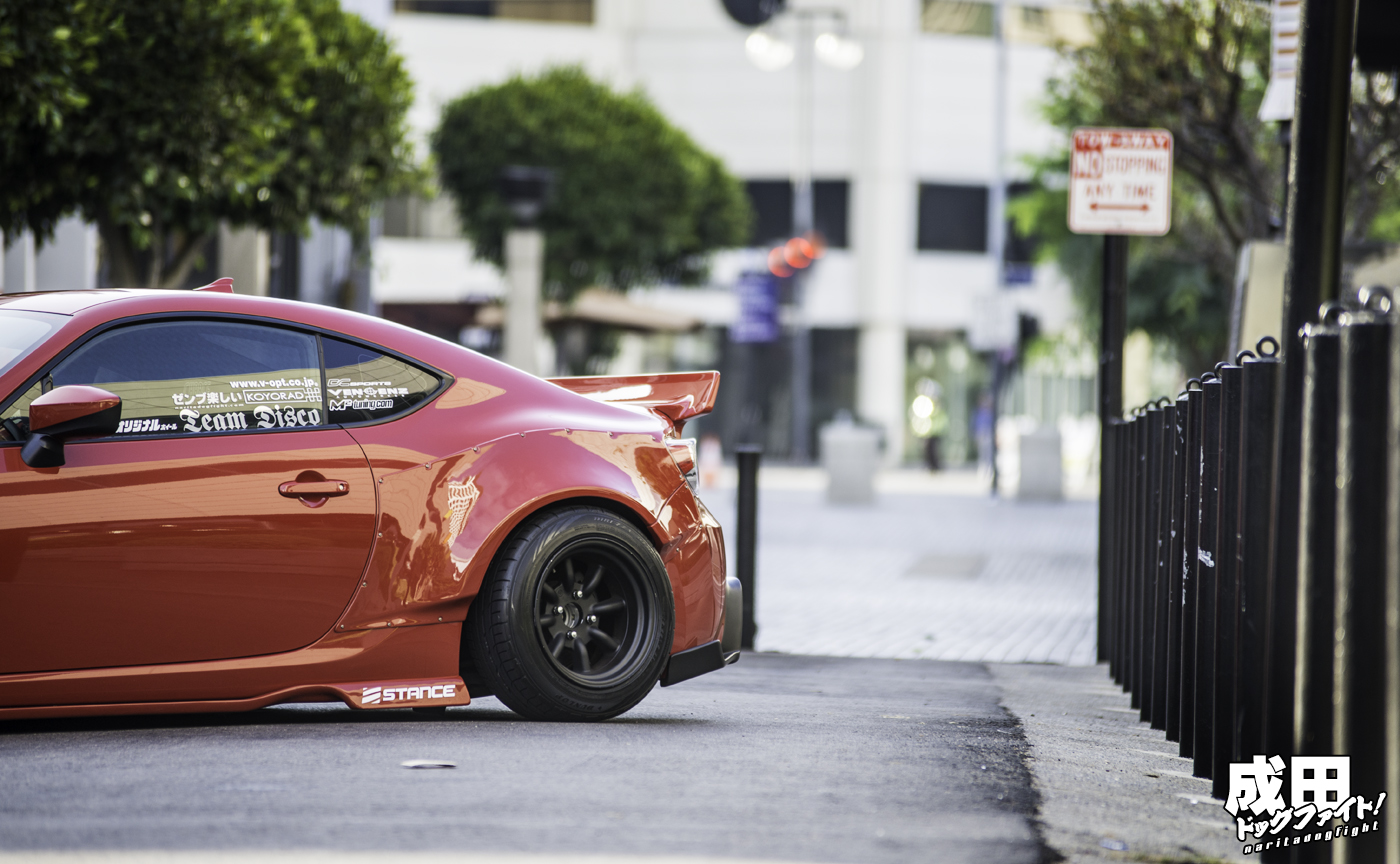 Growing up, as most kids do, Steve had a huge collection of Hot Wheels.  He’d spend afternoons surrounding himself in car culture with shows like Knight Rider and Dukes of Hazard.  The year Steve was born (sorry, going to date you a bit here man), his father had purchased a brand new 1974 Corolla Deluxe TE27, with the 4 speed manual gearbox – the same car that Steve would eventually learn to drive in.  His real love of cars, however, began in his senior year of high school when he purchased his first Corolla.

Back in the early 90’s, Steve and his friends would rent Option VHS tapes from a local video shop in Little Tokyo.  He eventually became hooked on the culture and participated at the very first drift day in Irwindale.  In a time where the US was more interested in drag racing, drifting had a slow start, but as you all know now, that has dramatically changed. 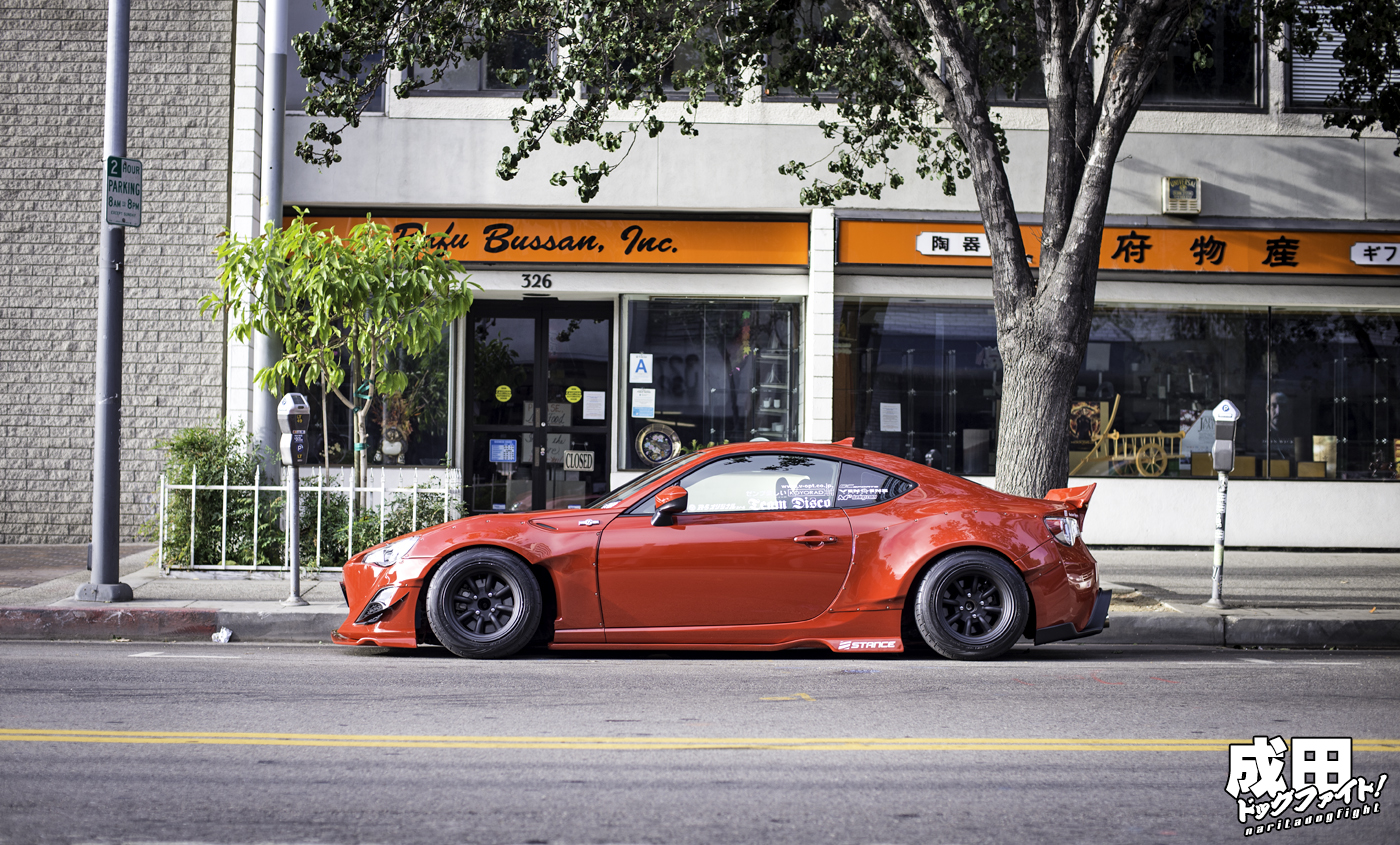 The car sits an aesthetically pleasing distance from the ground thanks to the Stance coilovers. 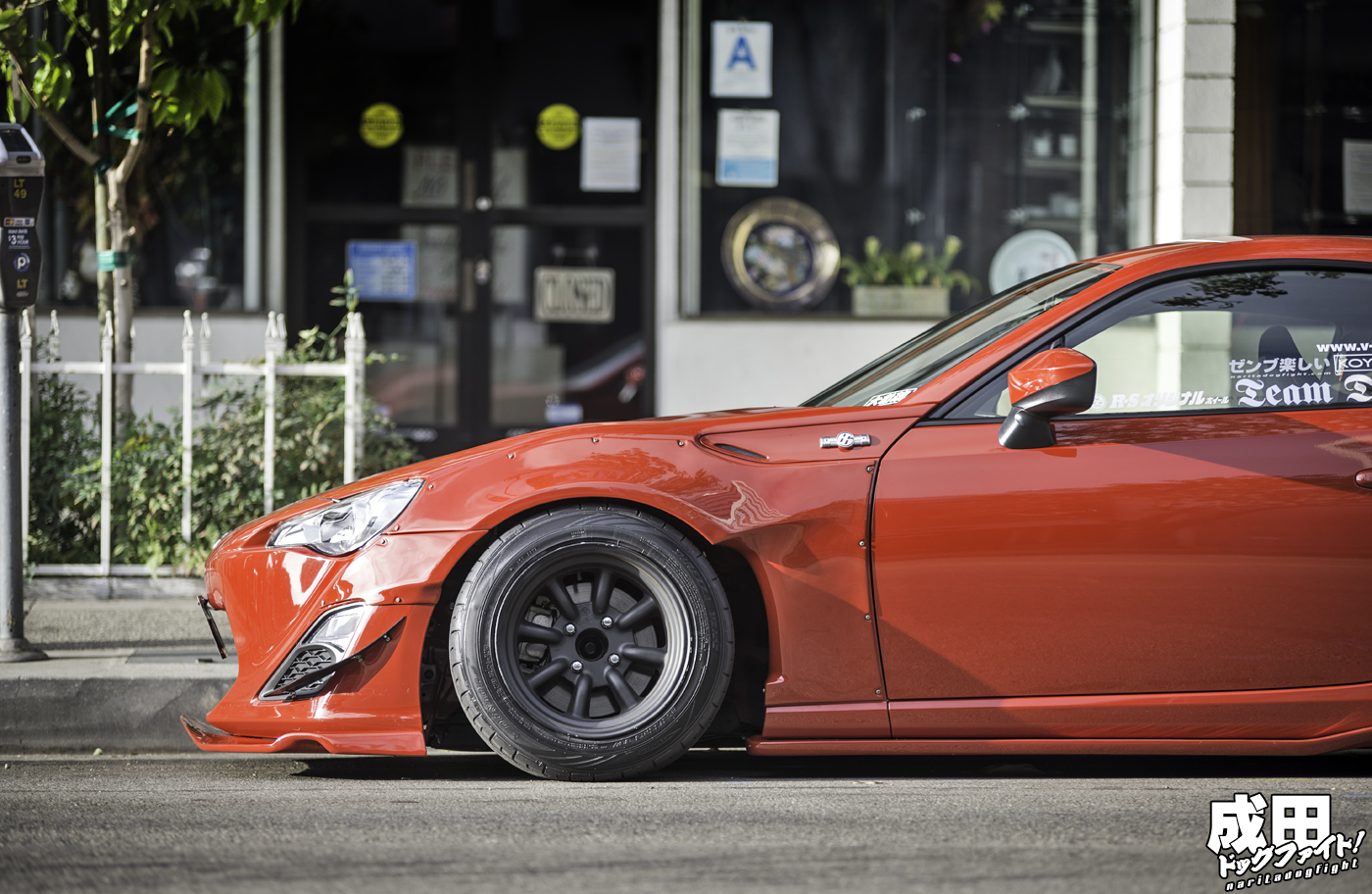 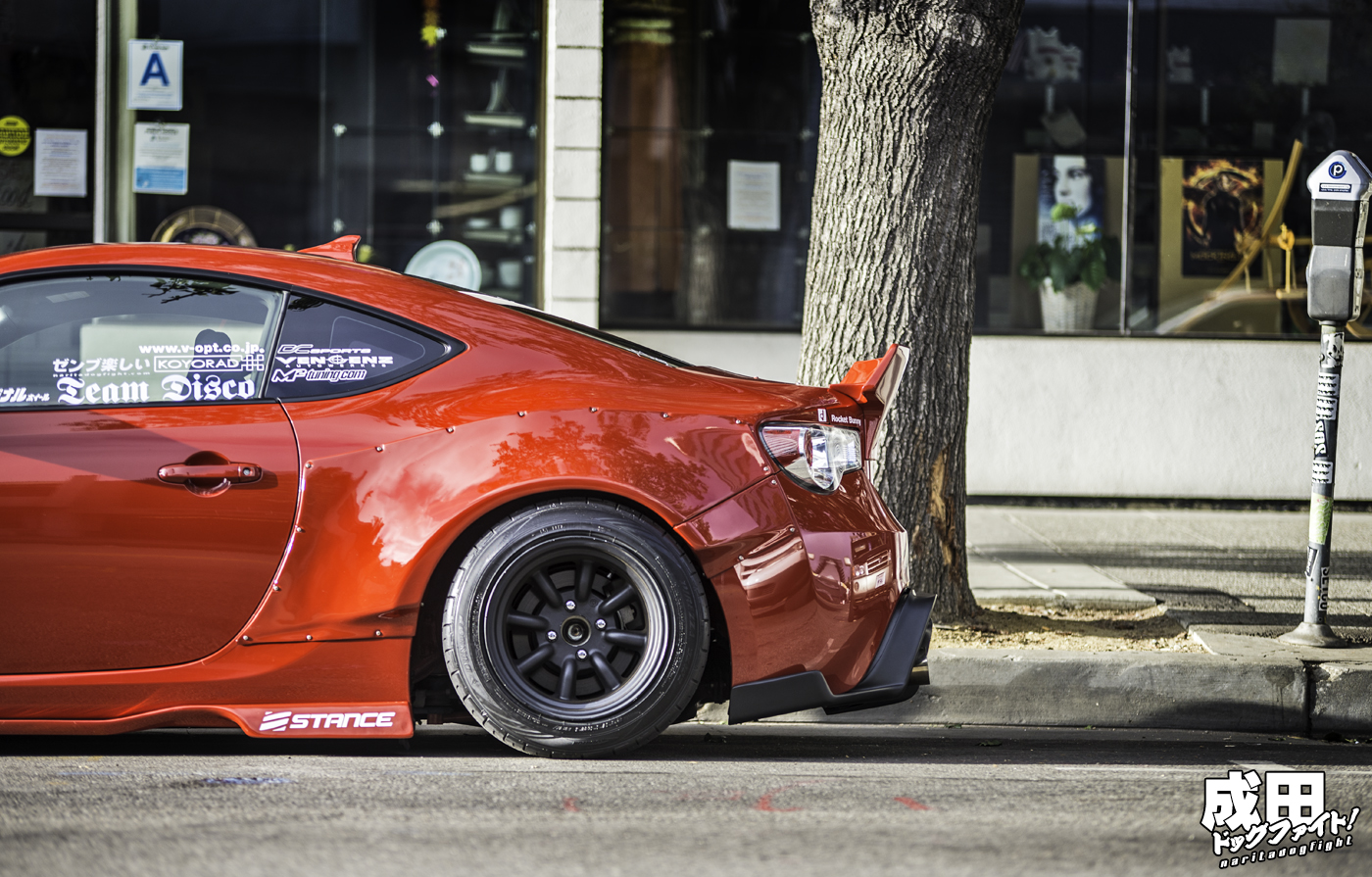 Steve’s approach to his FRS is a lot different than his Corolla build.  His Corolla, which was built around drifting, has a plethora of suspension parts, a 16 valve blue top head with HKS cams and a 20 valve silver top block with dual 44 Mikuni carbs and a 2 way LSD.  Good recipe for a track car.

When asked about his approach on the FRS and how it differs from the older chassis, he replied:

“I’m trying to keep it simple and reliable. It is very different from the AE86 but they share similar, important qualities. They’re both FR and are relatively light weight. Even though people say it’s not really a Toyota because Subaru manufactured them I still believe it’s truly a Toyota. The concept and design came from Toyota and would have not been possible without their vision.

As far as driving experience between the two cars, I have to admit, there’s nothing like driving an AE86. You hear and feel everything. It’s a lot more engaging. But having a working A/C is great on a summer day in California.” 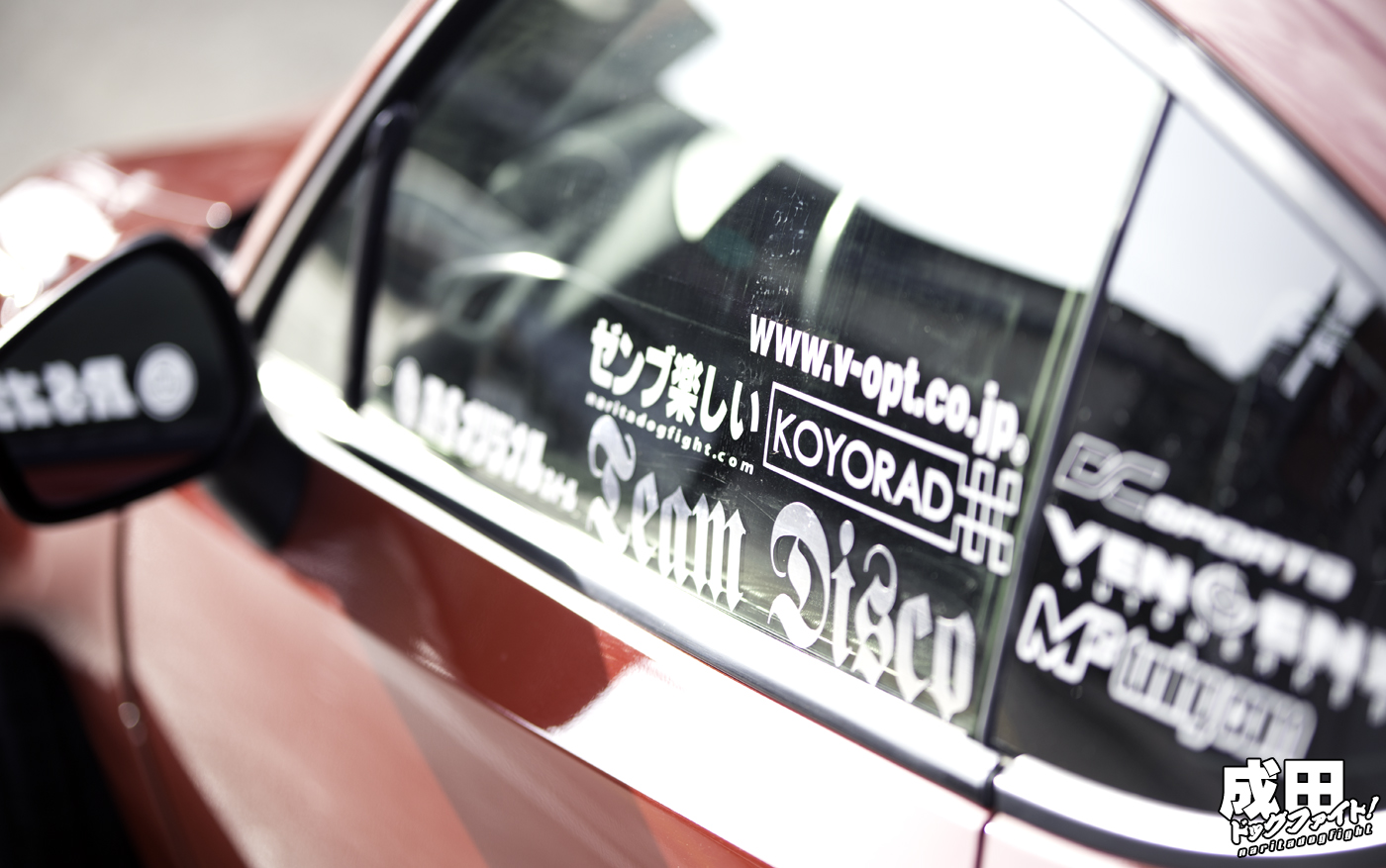 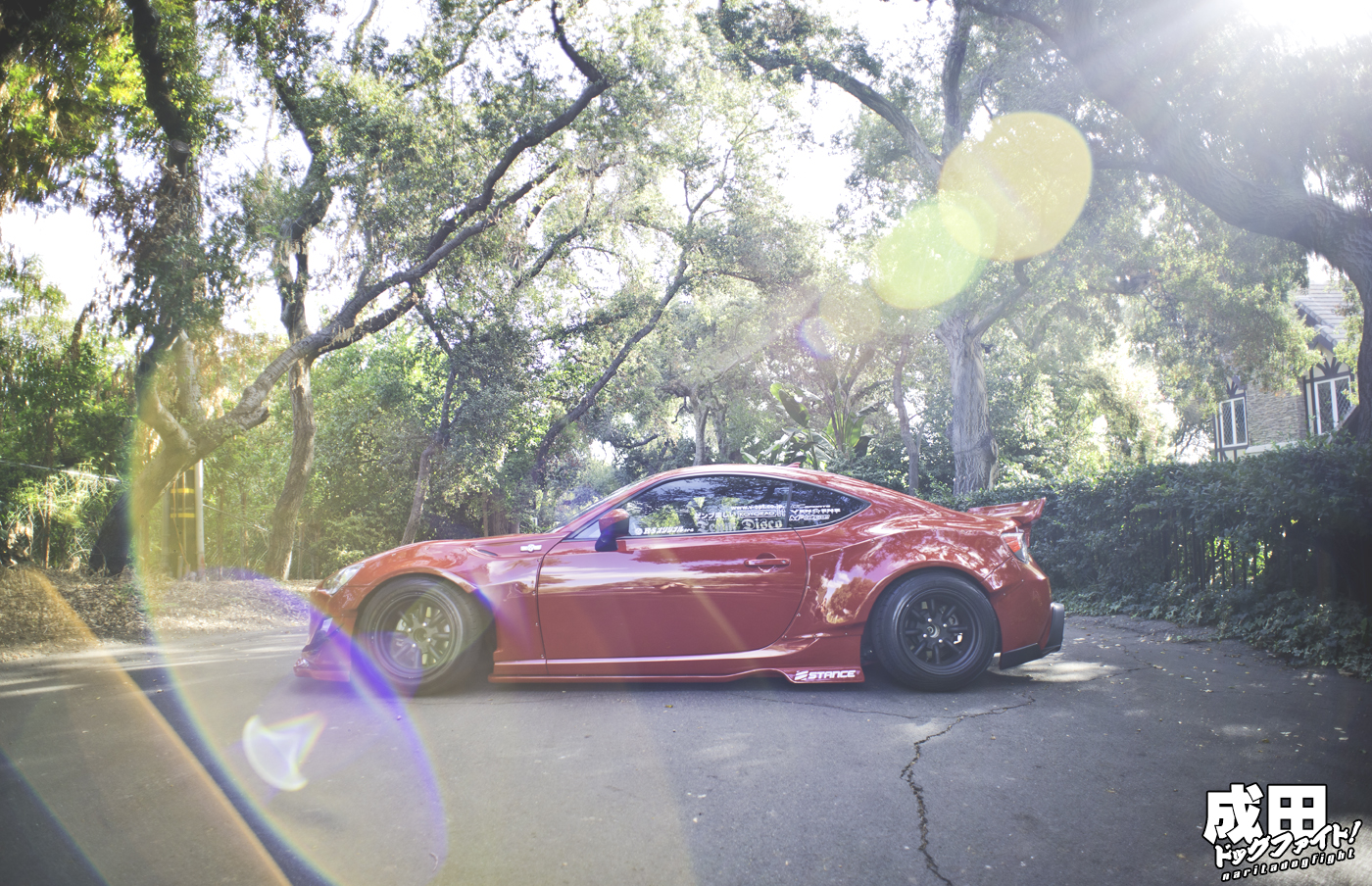 Future plans include some sort of cup kit to raise and lower the front of the car from inside the cabin.  Steve works at a graphic design firm in Santa Monica, and his commute sees a fair share of unfavorable terrain and steep driveways.  While a little apprehensive to spend money on something like that, it would relieve a great deal of potential damage to the front end, and wouldn’t really detract from the performance in any way.  He did mention for that type of money though he could get a really nice LSD.  Decisions…. 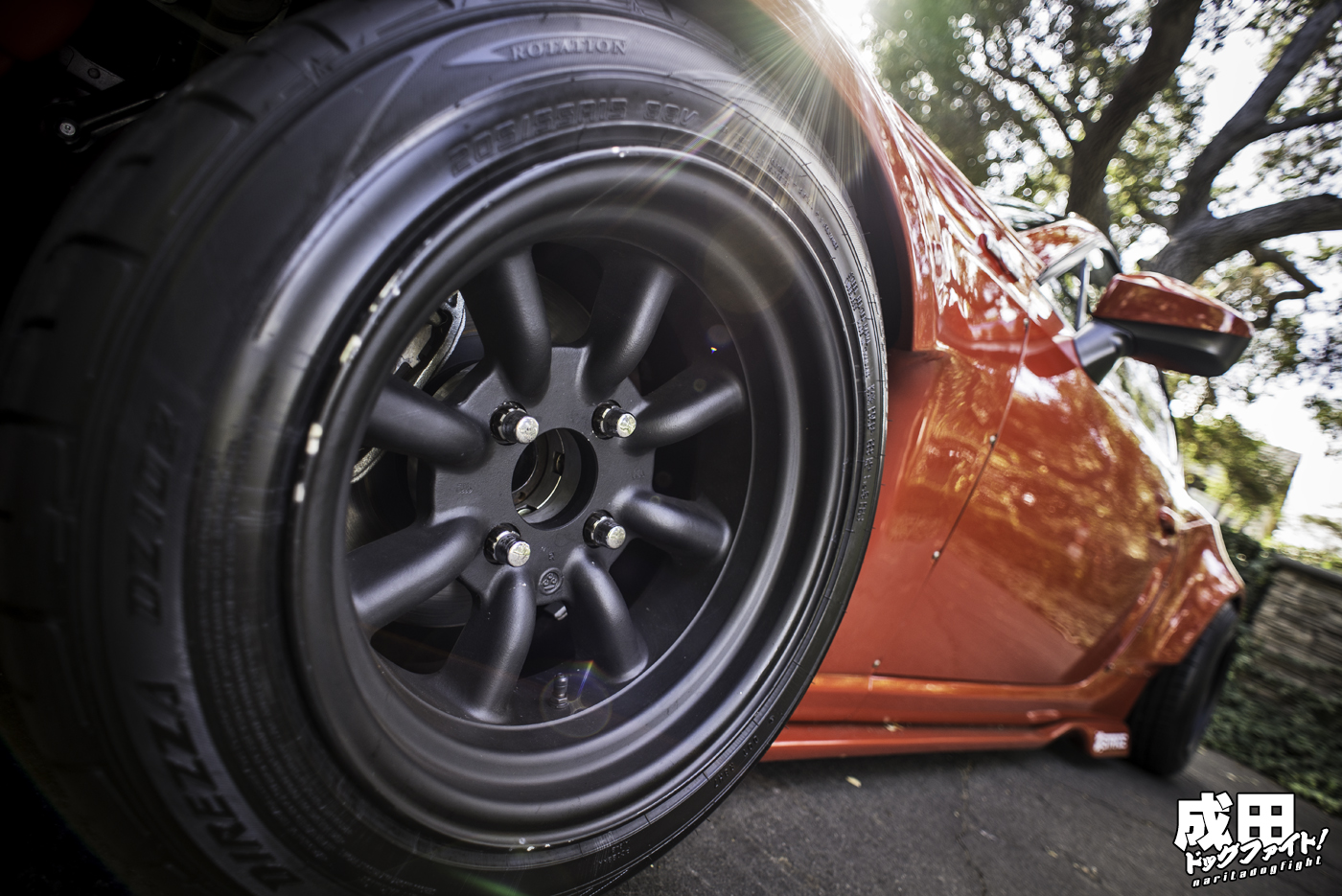 Closer look at the Wats in front of the Chateau in San Gabriel we were thinking about purchasing that afternoon.  Steepness of the driveway was OK, but no water feature in the front yard was a deal breaker for Steve. 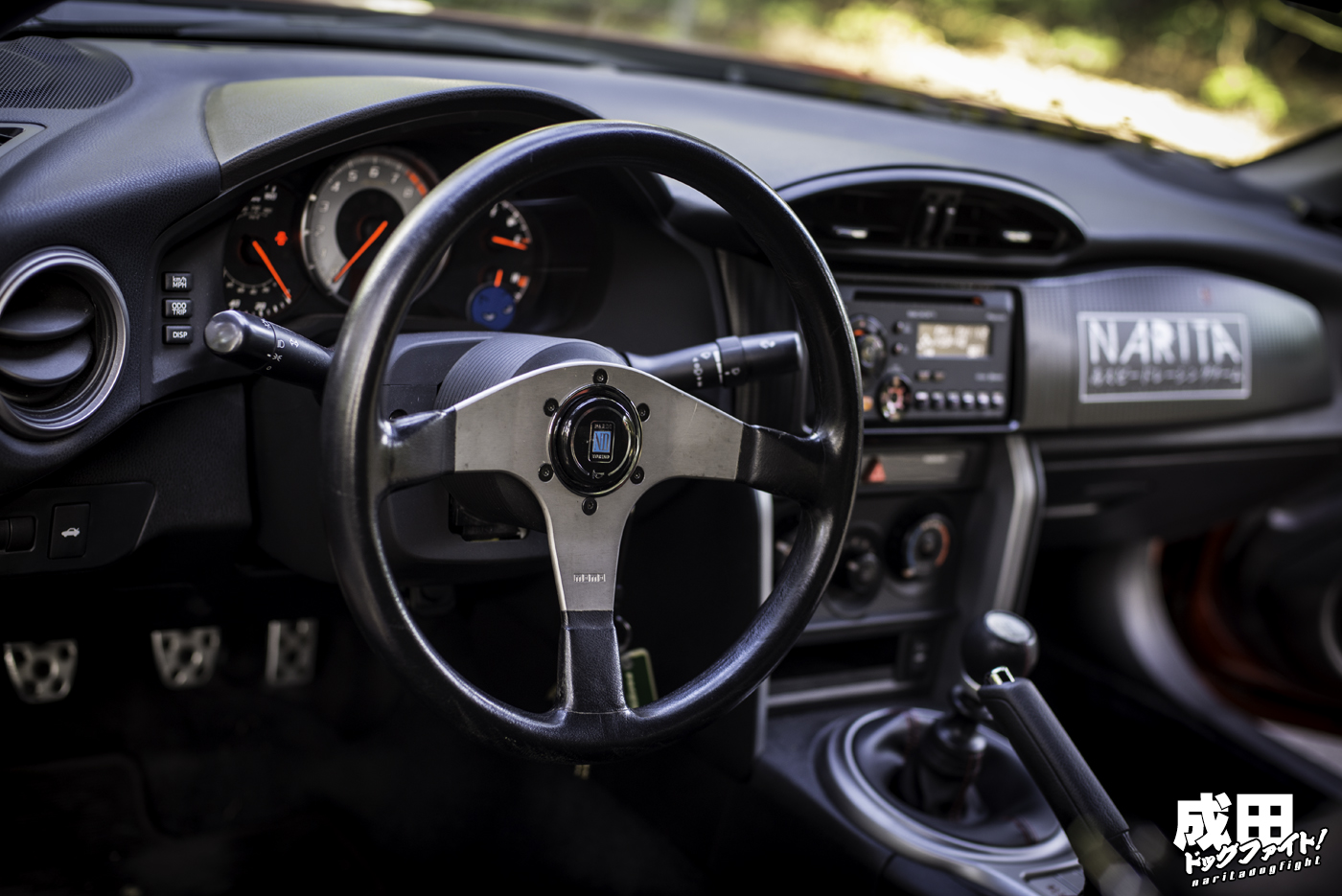 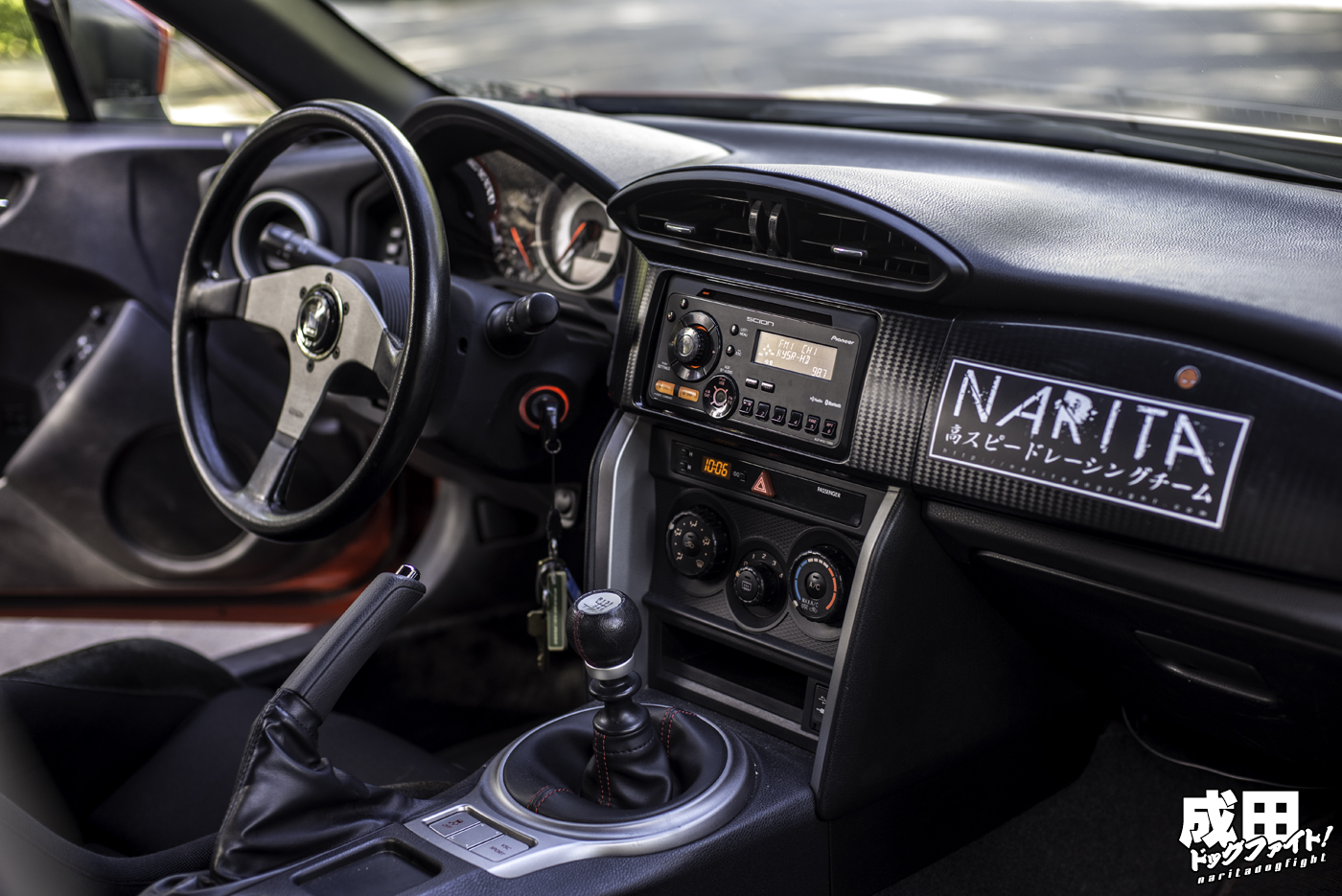 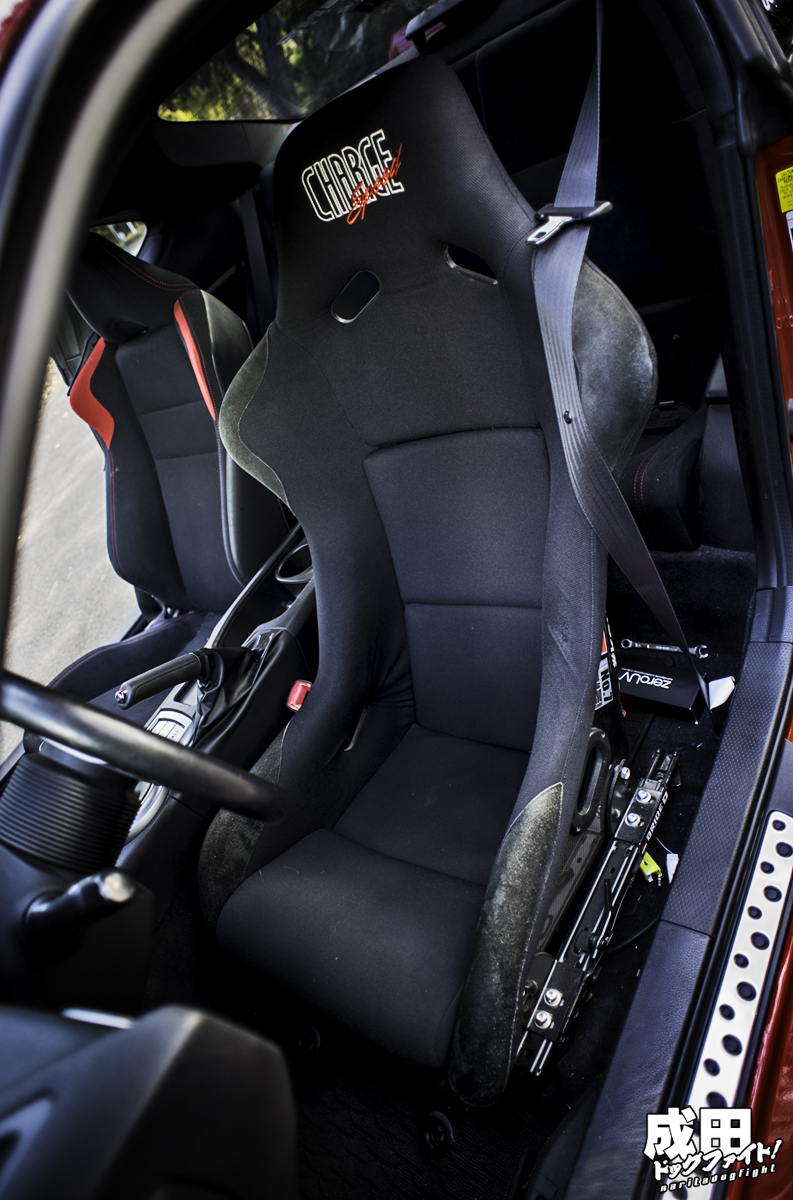 The cabin of the FRS is home to a small amount of interior upgrades, including a Charge Speed bucket seat, and Momo steering wheel. 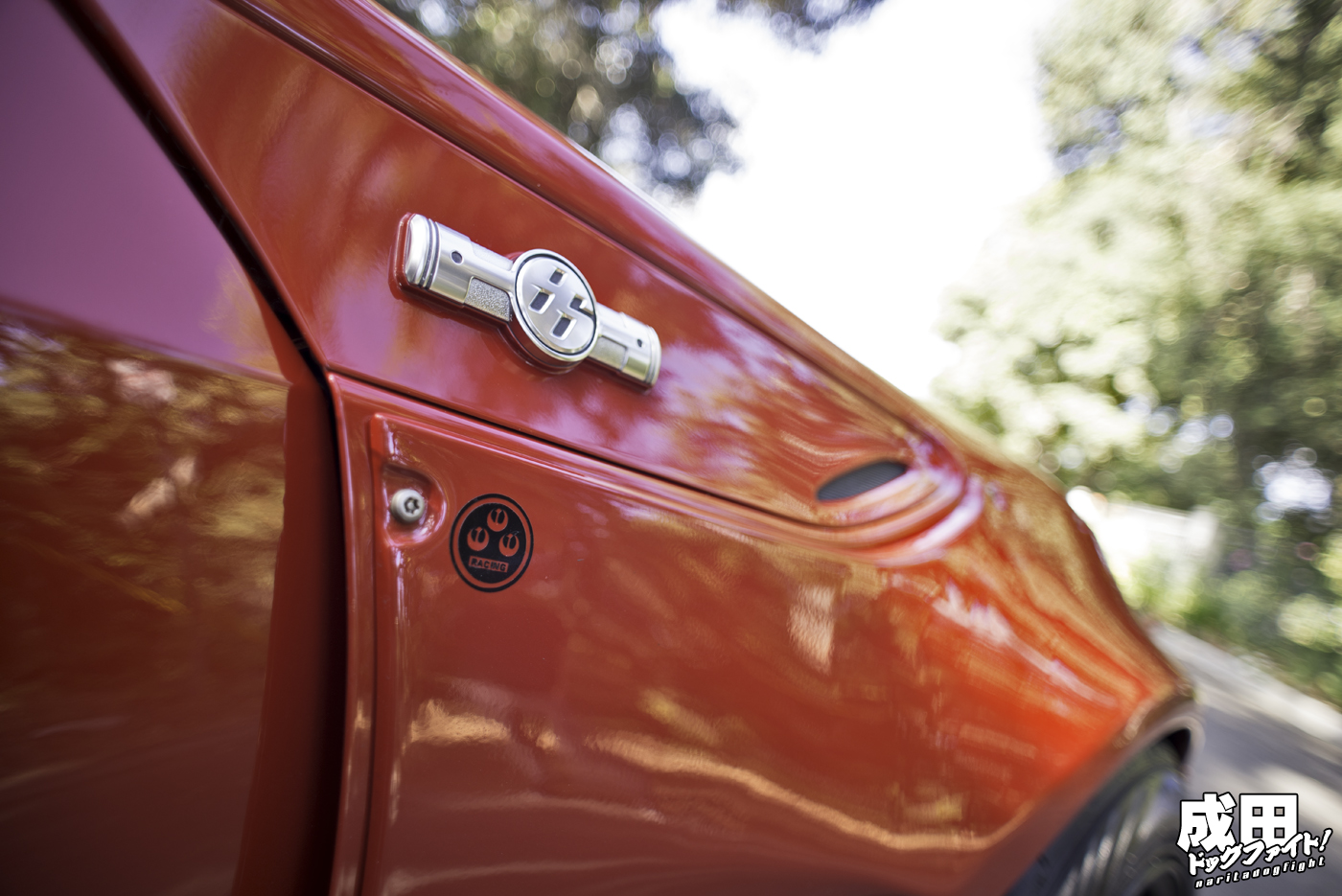 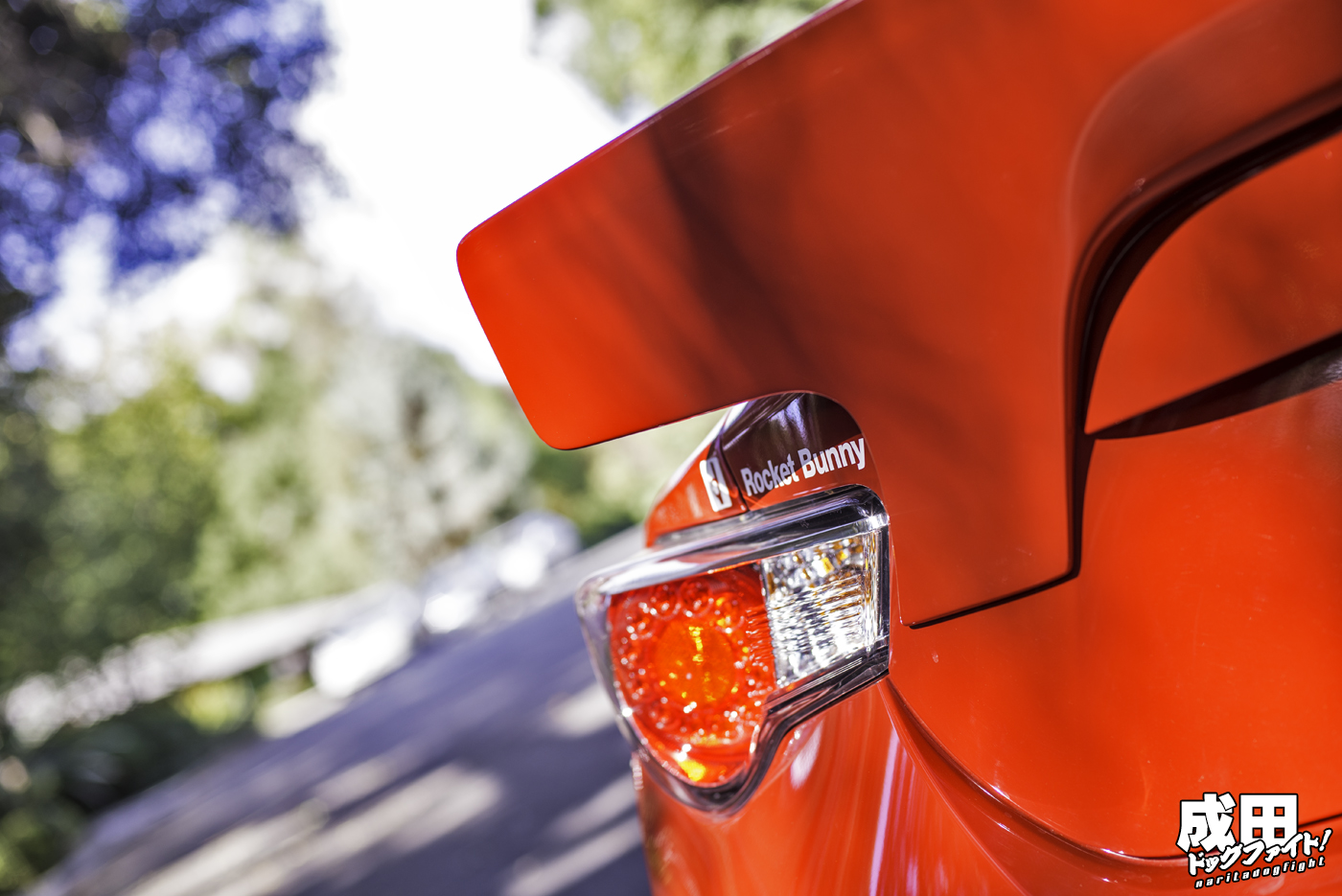 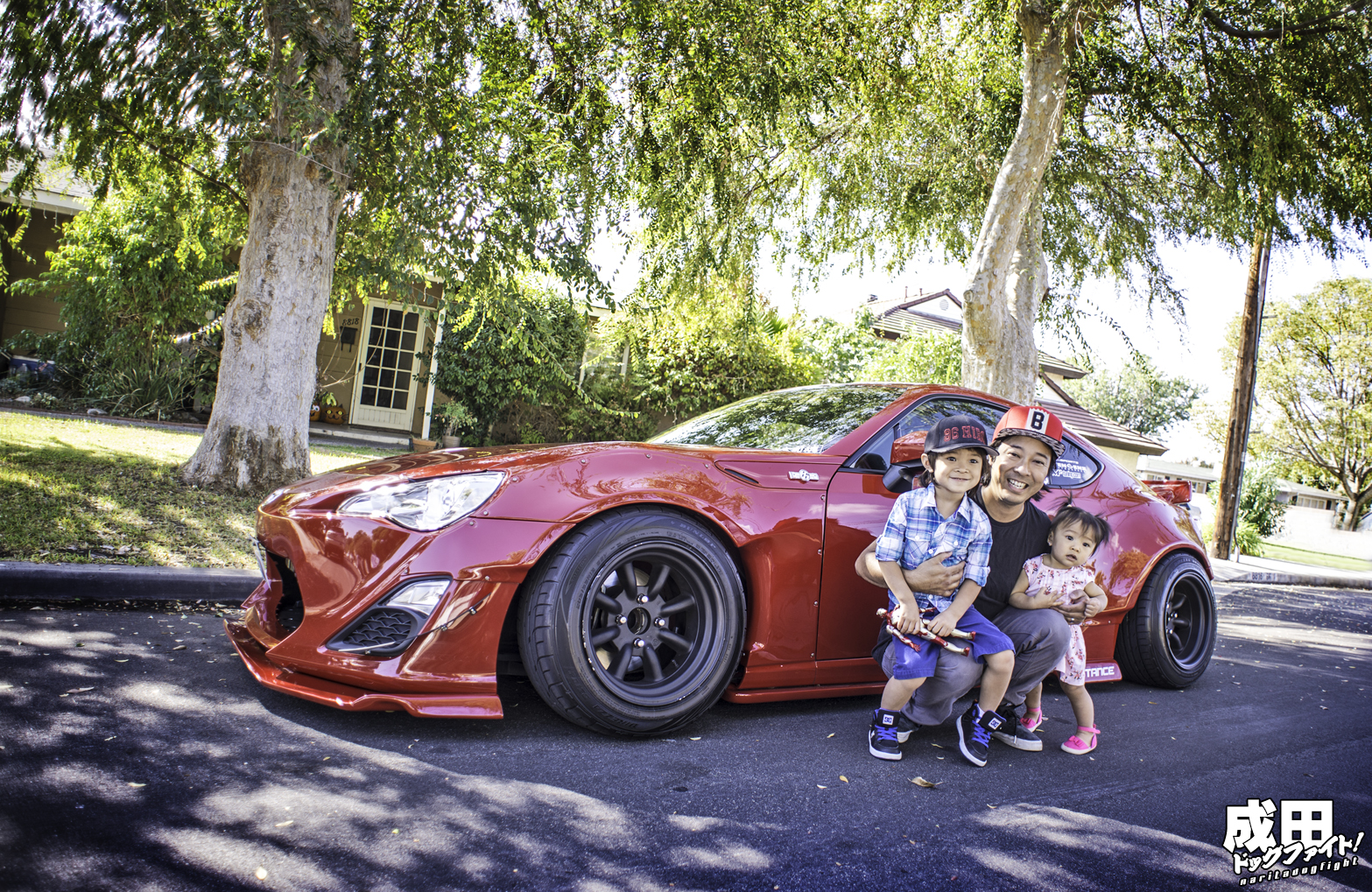 The car fits Steve to a T.  I couldn’t think of a better transition from his Corolla, and hopefully in 14 years, Hiro will feel the same. 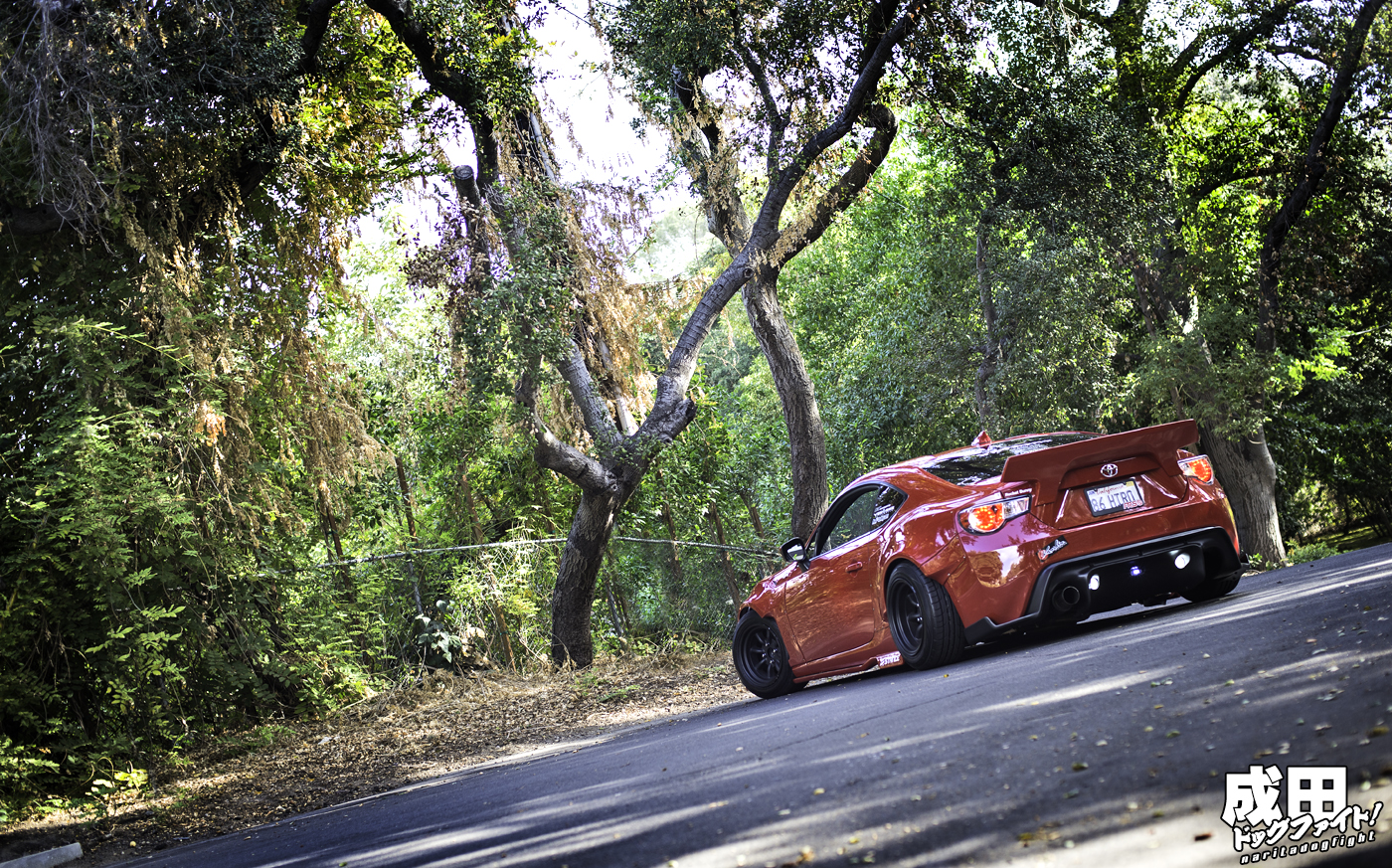 Thanks for your time Steve!