I know my recent posts haven’t been very lengthy by any means, and this one is going to be no different (that’s not to say I don’t want to type more, I’m just pressed for time).  If you’ve followed the blog for that past year at least, you’ll know this car.  Kazuya-san, a.k.a. Kotora, a.k.a Baby Tiger, a.k.a. Fastest NA Civic around TC2000 on radial tires, a.k.a….just kidding I have no more names. 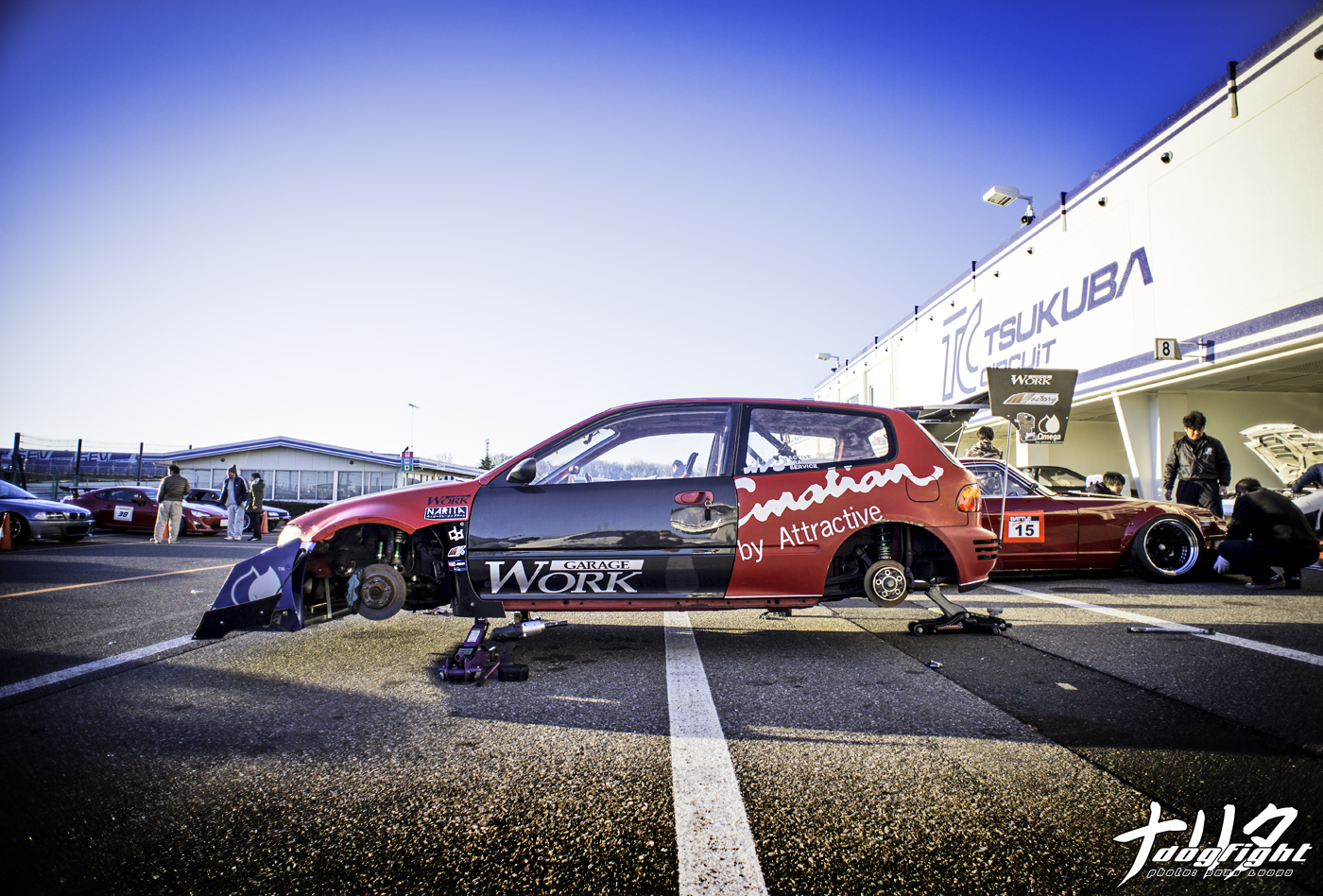 Kubo-san (I lied, there’s one more name) is Iwata’s right hand man at Garage Work.  If you’re not too familiar with either of them, you can check out this post from one of my recent visits to the shop (you’ll also get an explanation of why he has Iwata’s front end on his car now).  Actually, even if you do know about them that post is worth checking out haha, shameless plug, I know.

So, you’ve all seen the car before now, yes.  However, at this past Battle Evome, Kubo had a pretty special goal he was shooting to break; sub-one minute lap time around TC2000 on a ‘radial’ tire.  Radial tires, in Attack, are considered a class below ‘S Type’ – which basically means you’re not running an A050.  Kubo was on both ZII’s and Kumhos this day, which he is no stranger to, as he runs in the Direzza Challenge series.  Admittedly though, the Kumho rubber is a little faster.

The first session out it appeared as if the goal he had set for himself would be quite easy to achieve.  On his initial outing he had a hot lap of 1’00.25; so close!  Keep in mind though that this isn’t their first rodeo.  Having run TC2000 multiple times, and knowing his car as if it was an extension of himself, of course his first outing is going to be good.  Honestly, With the amount of seat time these guys have, gaining two tenths is much more difficult than it seems.  His final session garnered him an agonizingly close 1’00.018; while this stands as a course record, it still didn’t get him what he was looking for.  He ended up first in his run group and 15th overall for the day (out of about 50 competitors, beating out multiple FD’s, GTR’s, EVO’s, etc…).  Personally, I am extremely proud of Kubo.  Knowing him personally, and watching him both work on his car and how he performs behind the wheel, what he puts into the sport is arguably unmatched – no doubt he gets that from Iwata-san.

Keep that in mind as you view the following photos.  I’m pretty happy about how they came out, and hopefully they portray the spirit that Kubo resonates when he drives.

Early morning car prep.  Garage Work had 3 cars driving this day, so the whole family was out and about helping each other. 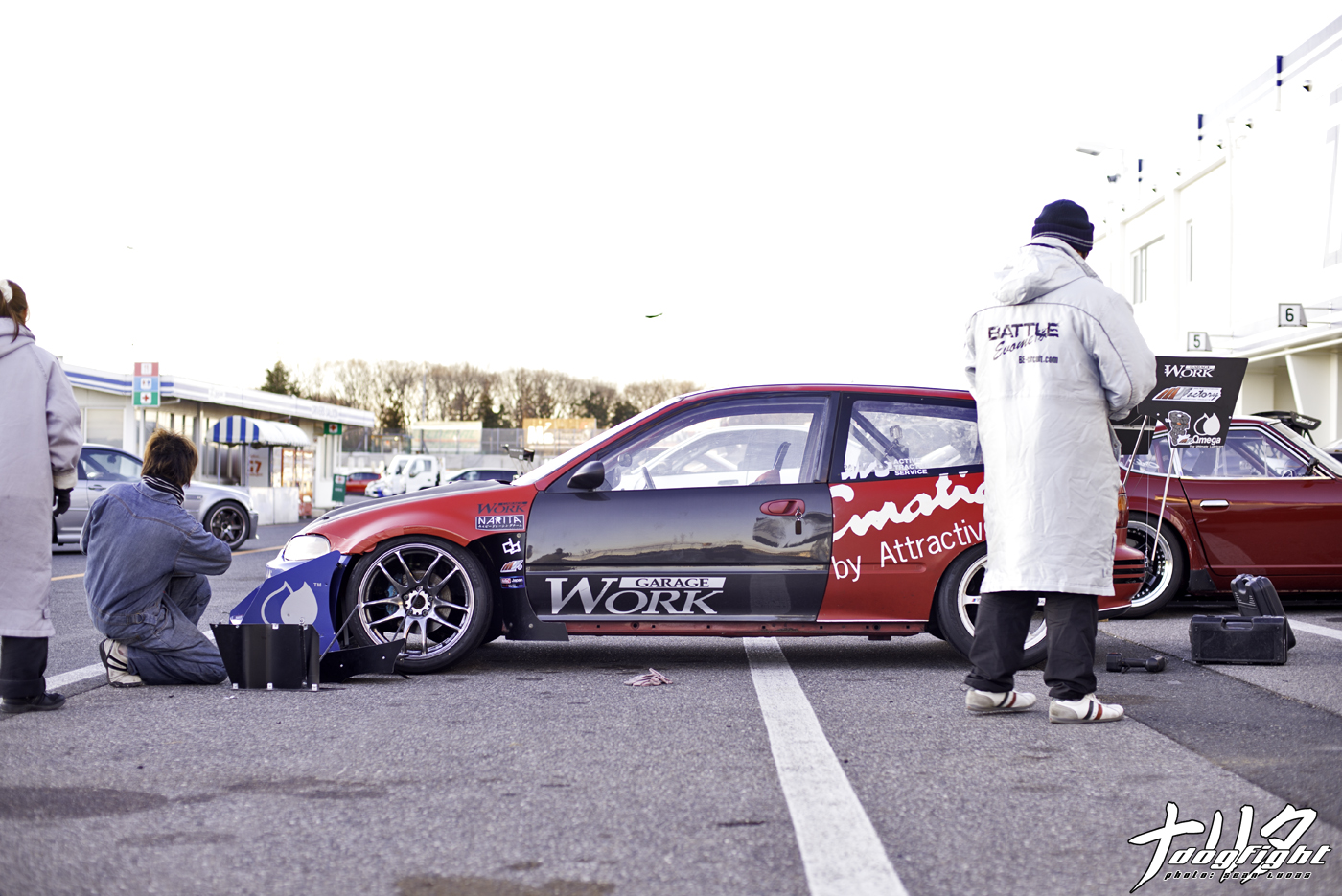 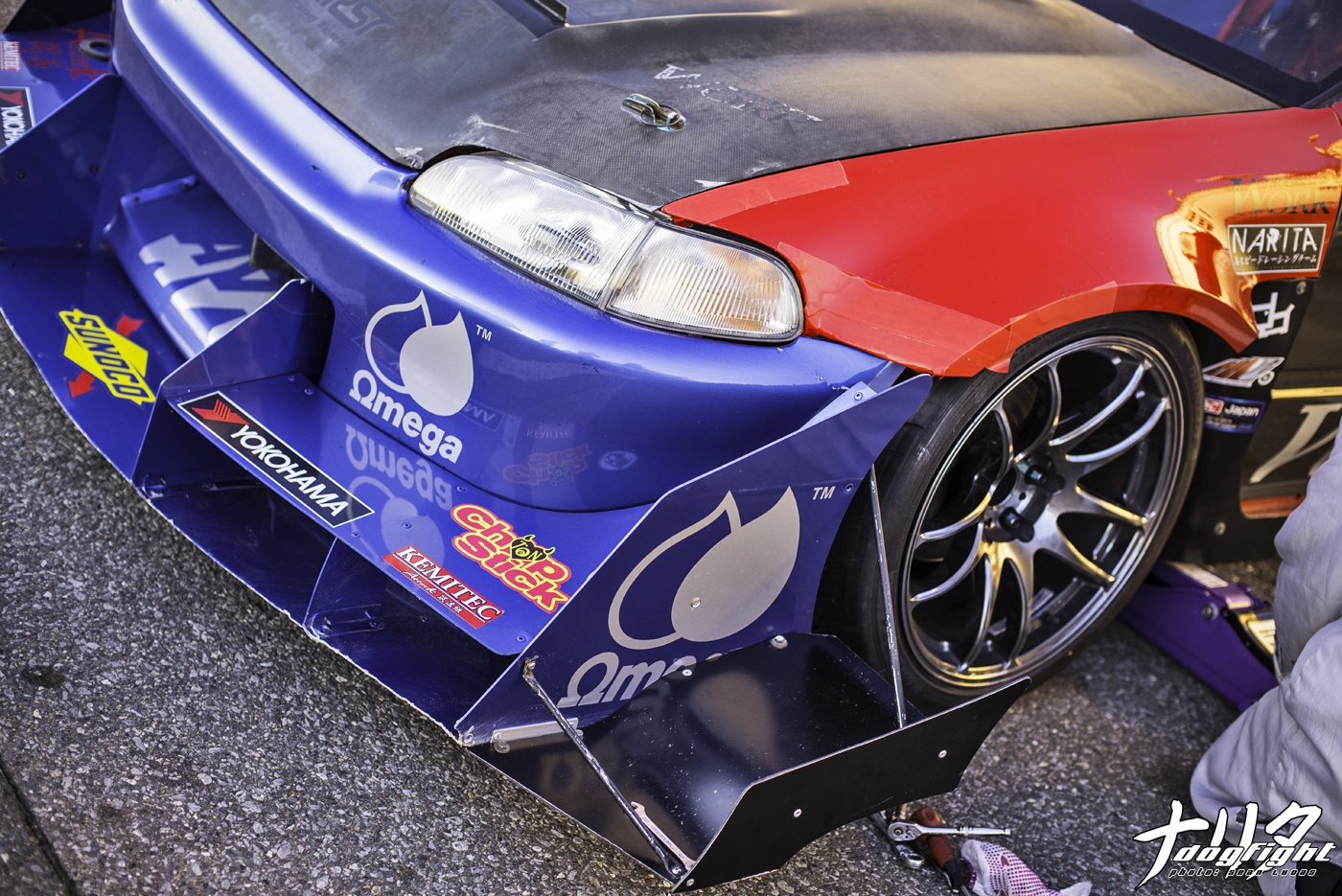 Since these cars aren’t classed by the aero they run, little additions like this splitter add on are great ways to achieve that extra tenth! 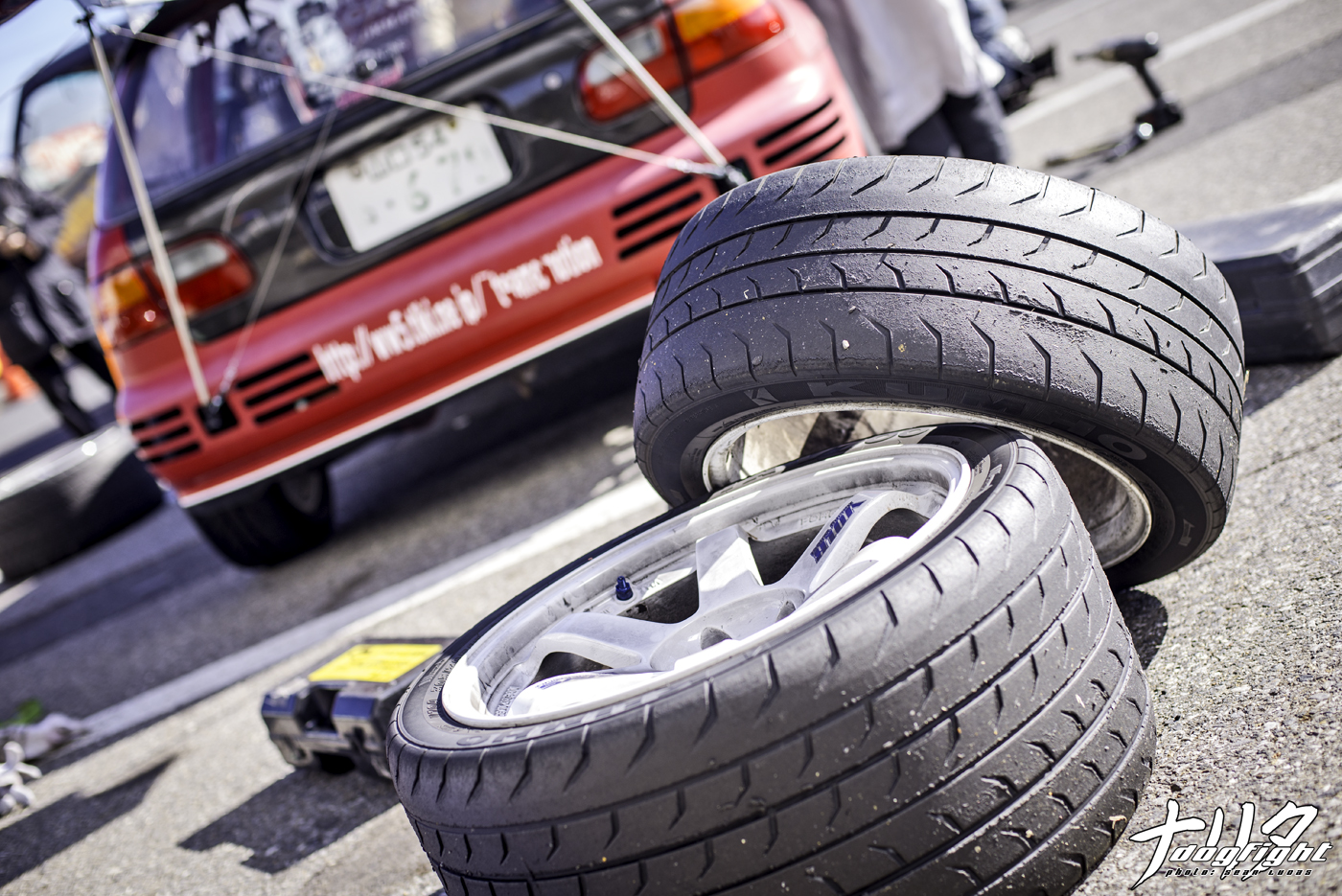 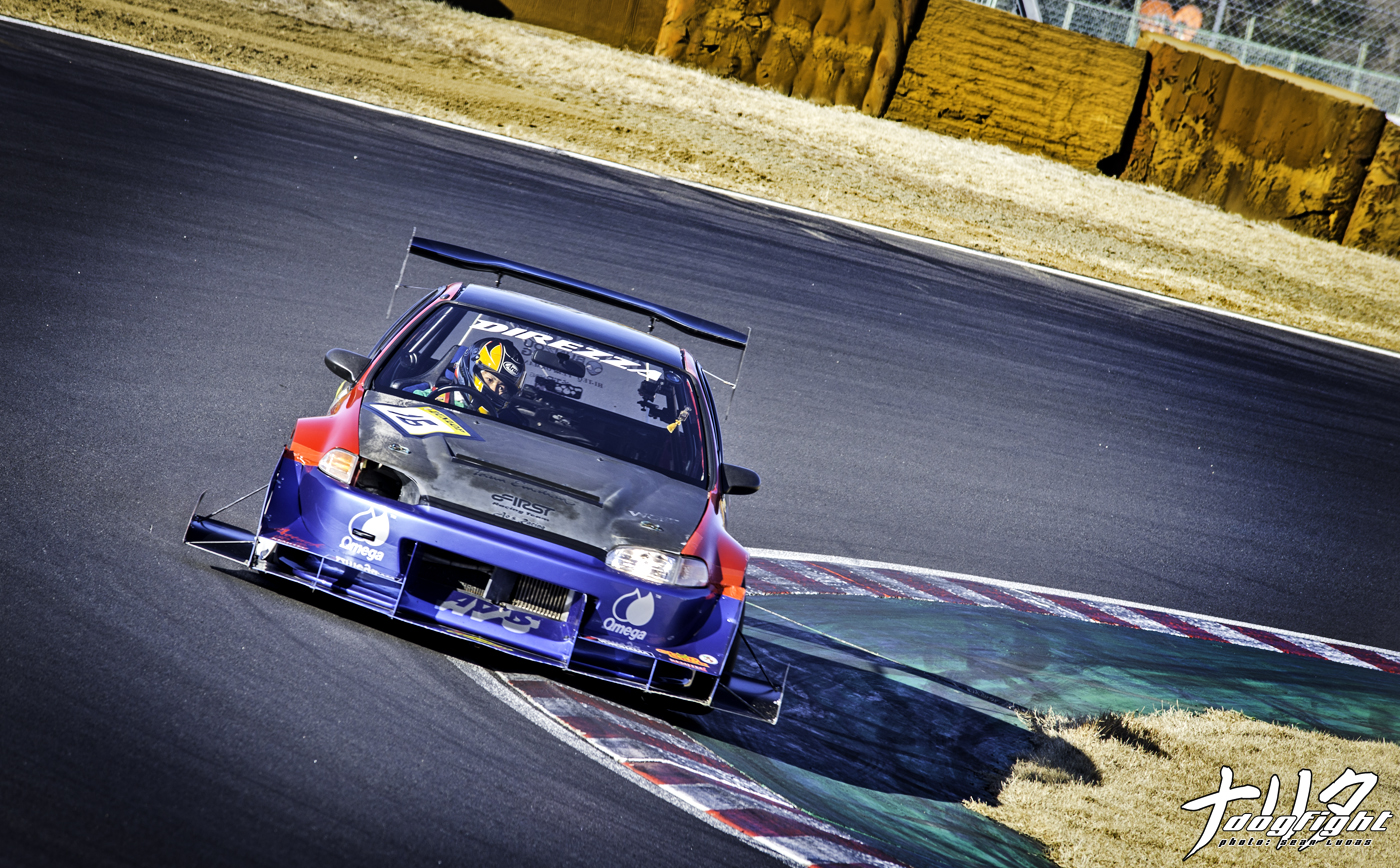 Out on circuit, this was Kubo’s first hot lap. 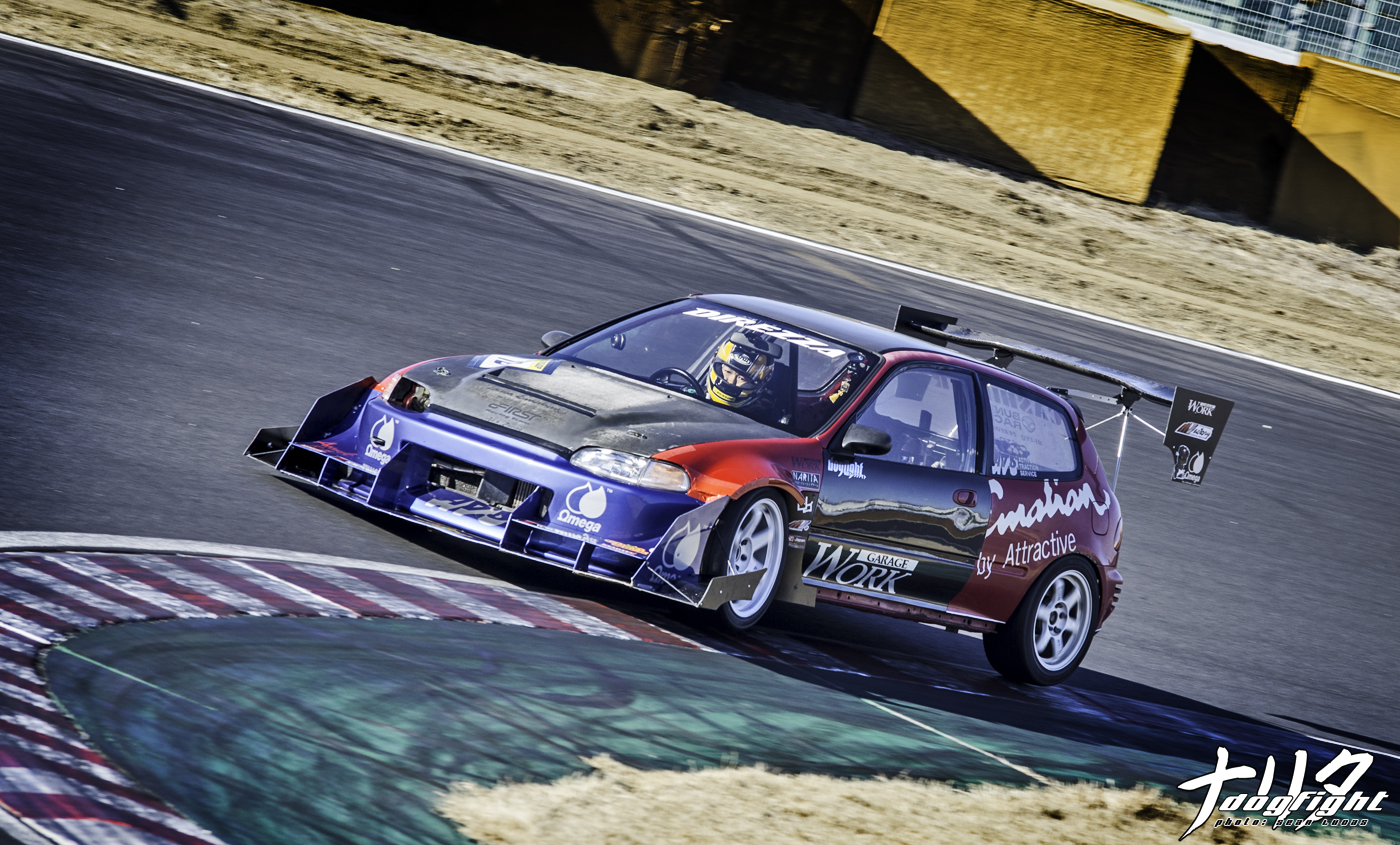 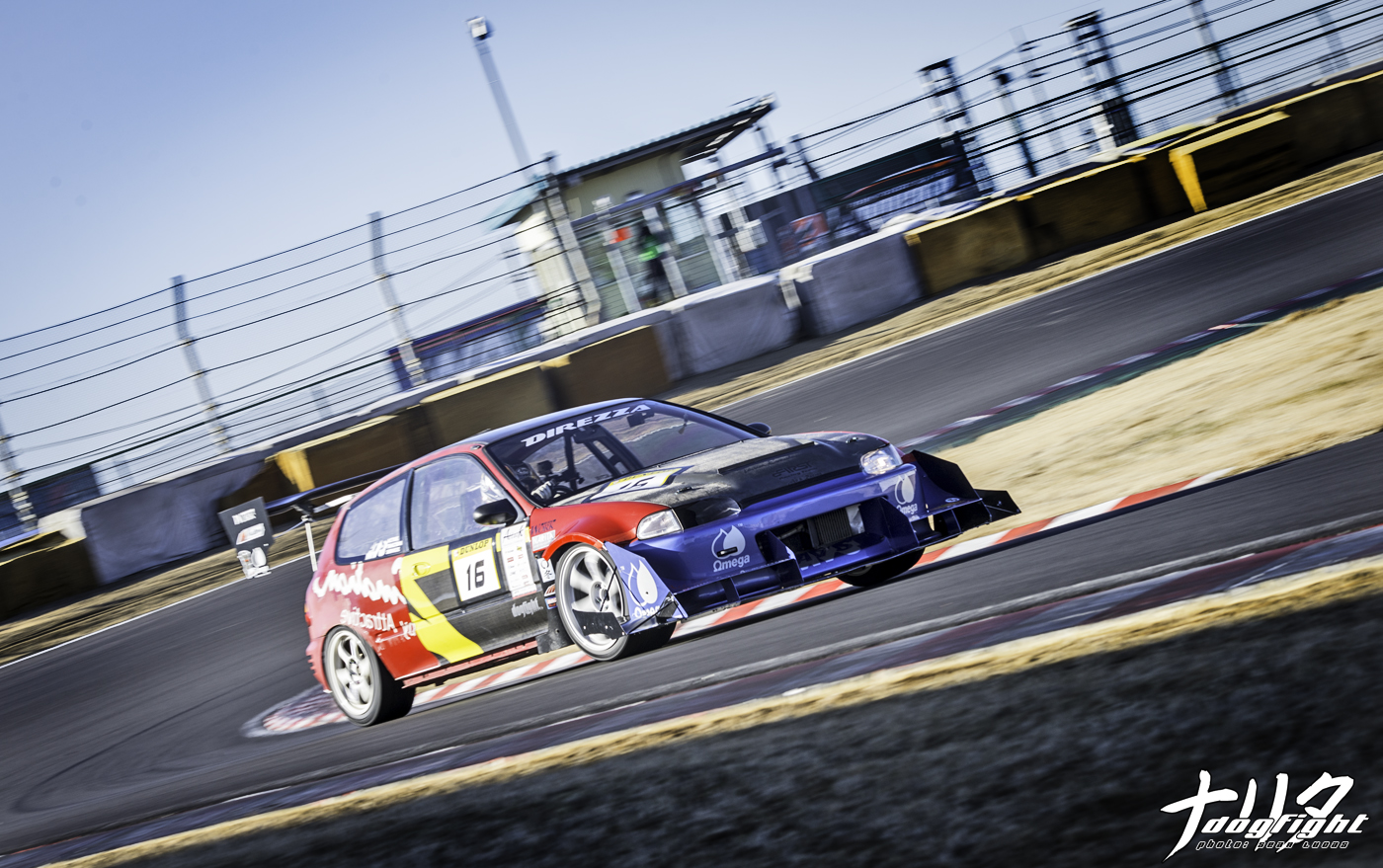 …and powering out towards the Dunlop corner. 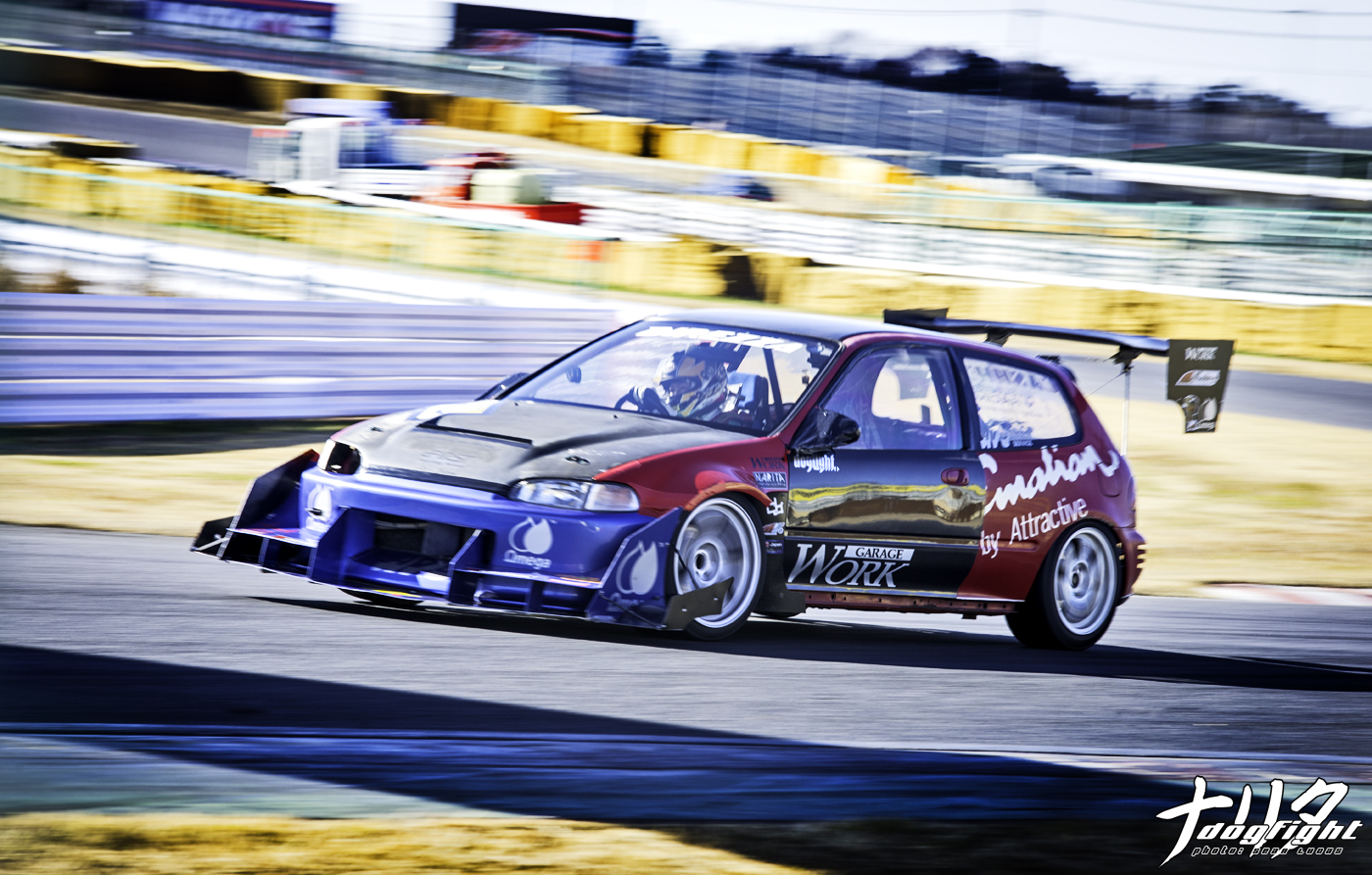 Flat out under the Dunlop arch. 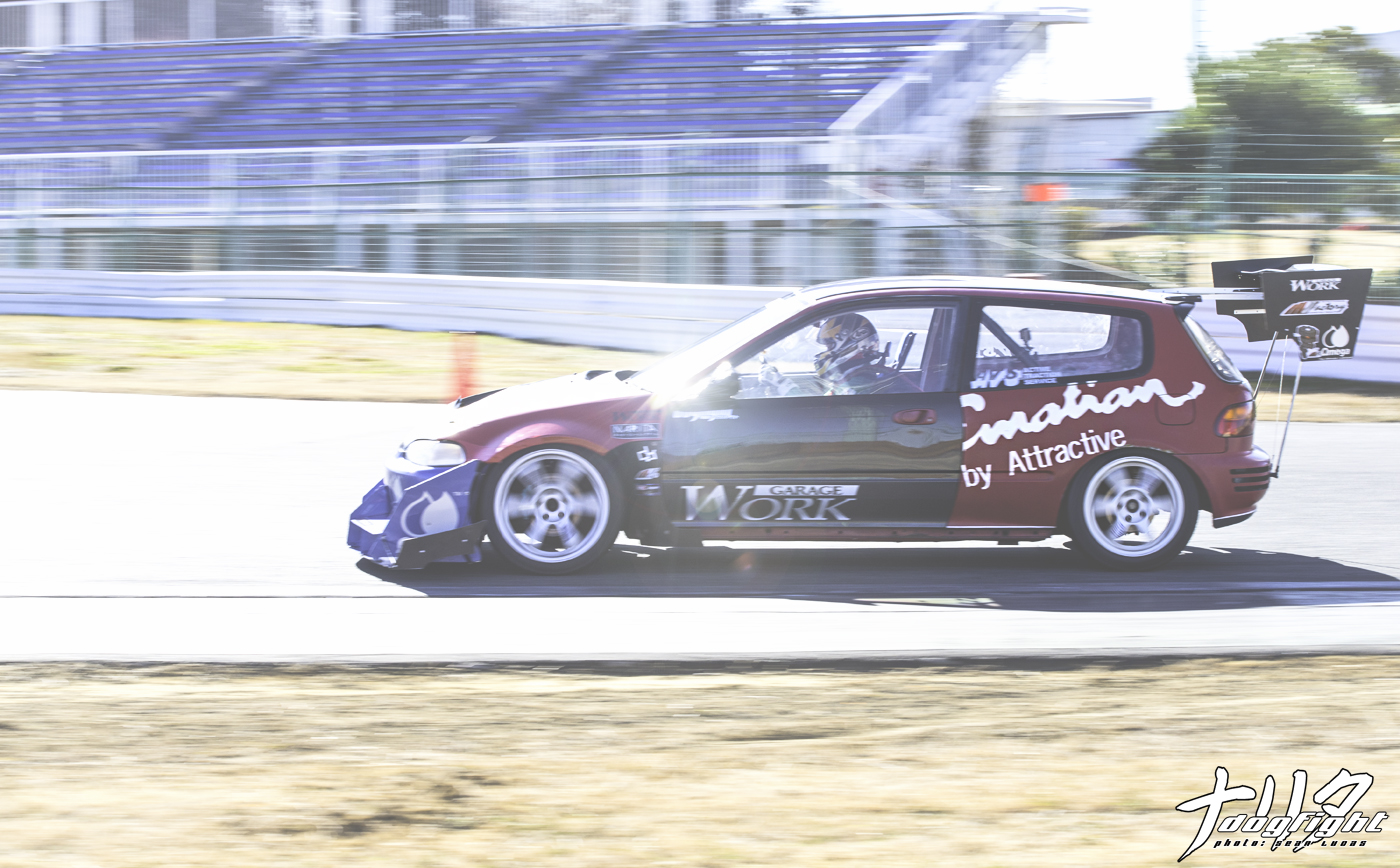 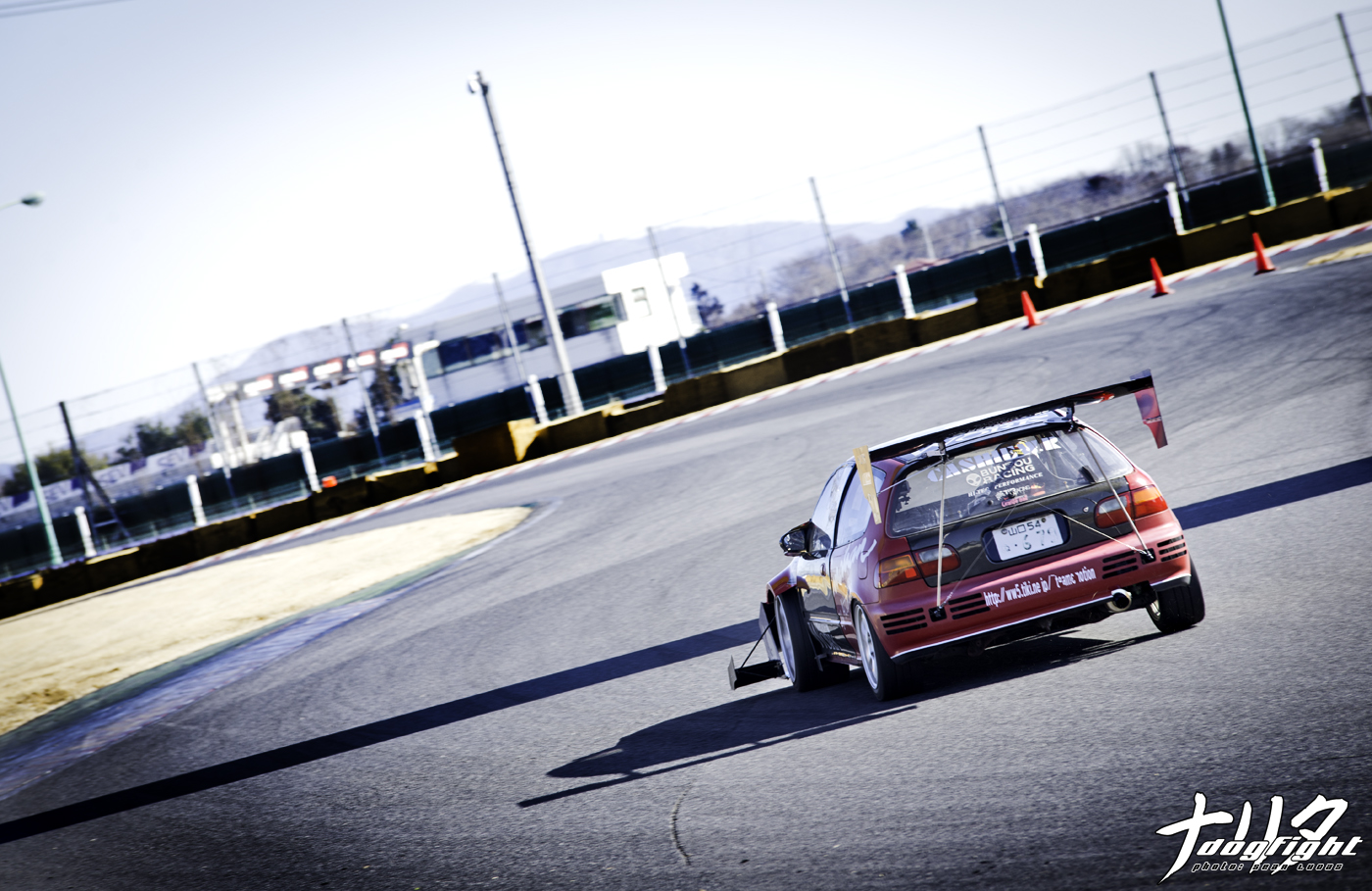 Headed through the large S, towards the final hairpin, and down the back straight to the finish line.

While he may not have accomplished what he set out, he sure let everyone know that he will next time. 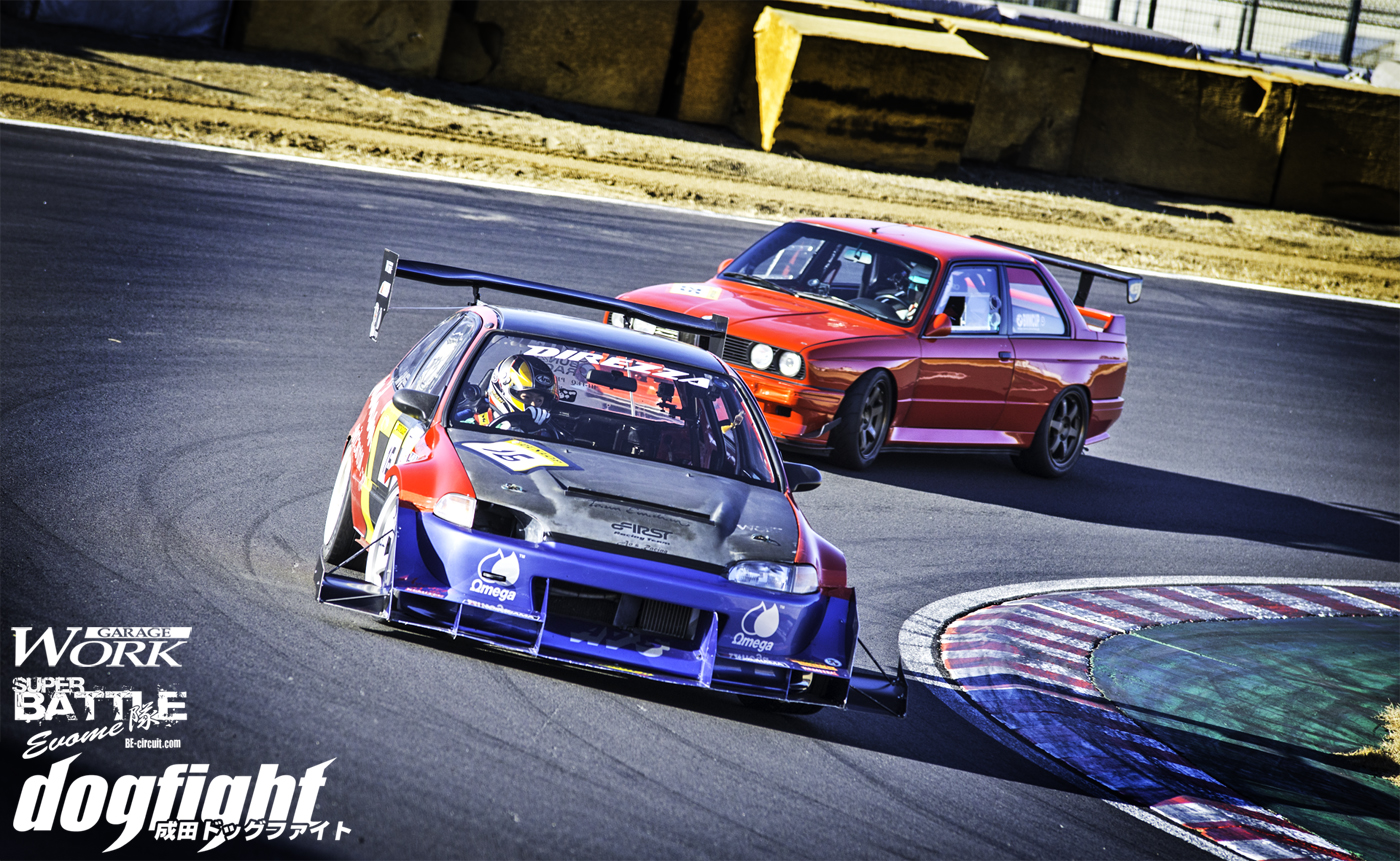 Looking forward to his next outing – no doubt that he will destroy his goal. 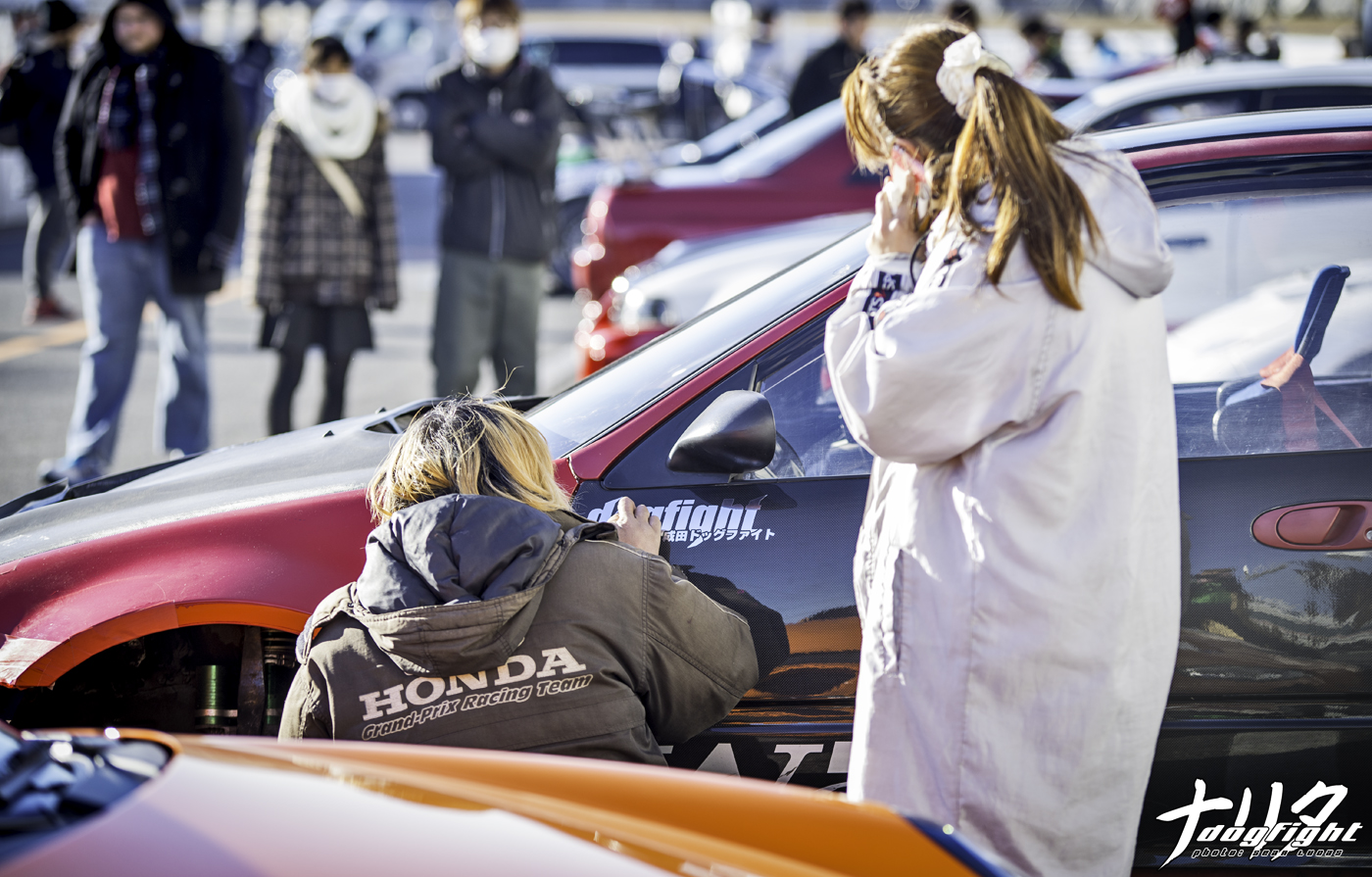