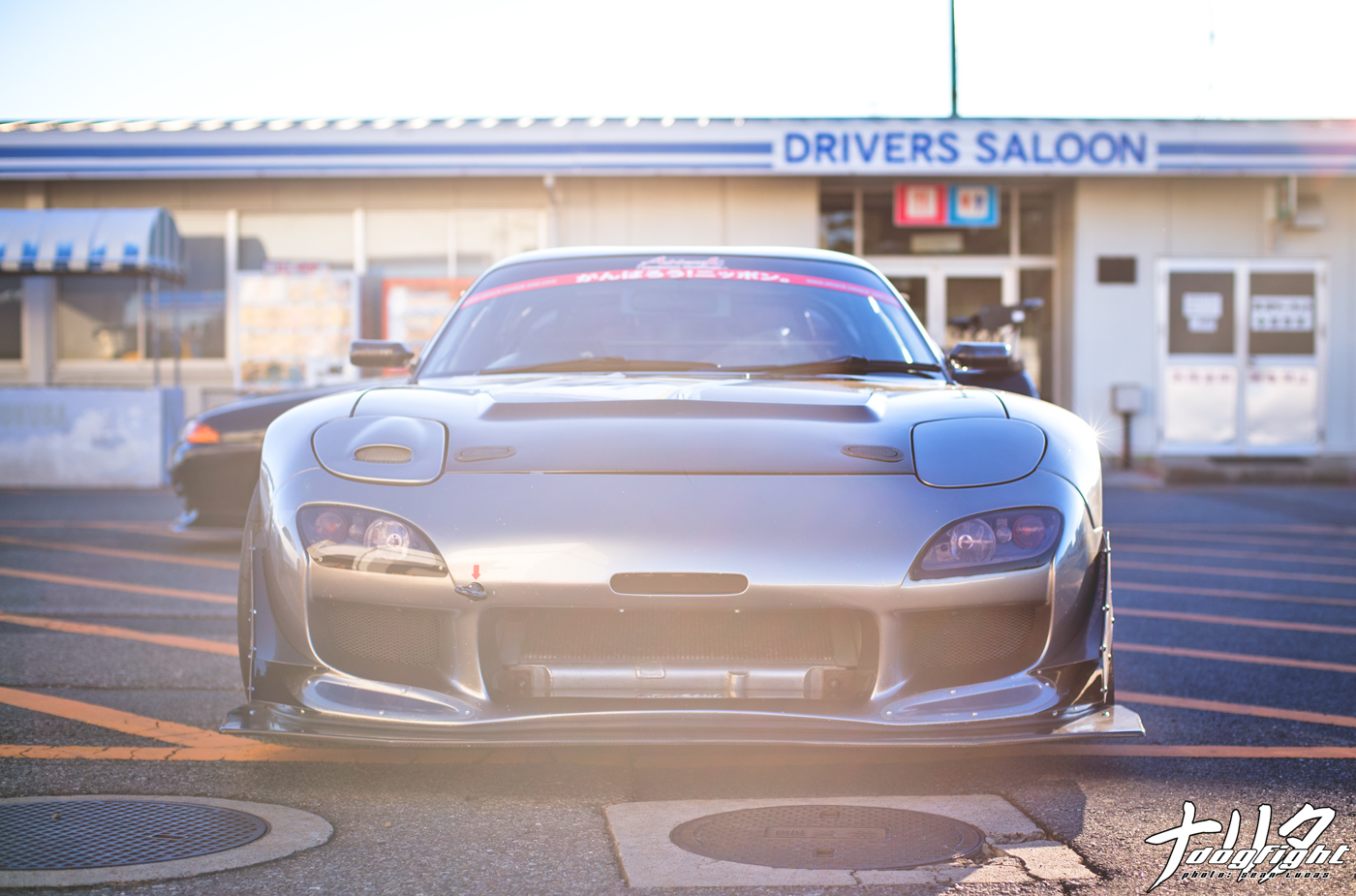 I’d say that, after three years of attending Evome, the one thing I really get excited for is seeing everyone again, as well as meeting new friends.  The privateer ‘Attack’ season in Japan is such a short lived experience each year that my time with the drivers is fairly brief.  This is somewhat of a Catch 22 because while it does make each encounter much more special, I end up having to divide my time between talking to people and photographing the hour long event; and with just 3-4 Evome events a year, my time becomes very limited (especially not living in Japan). 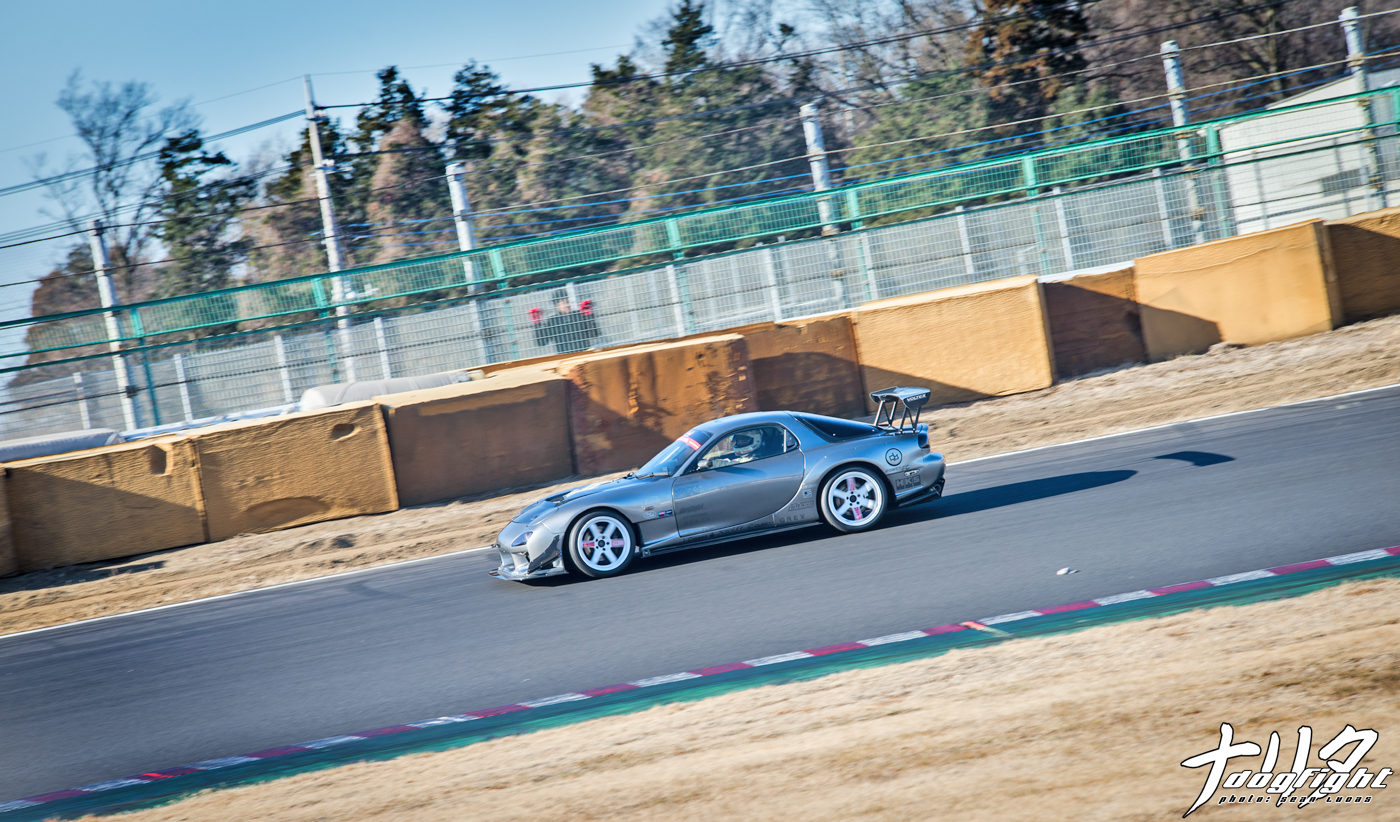 When I do get the chance to connect with someone though, it makes for a special memory for me.  I suppose, due to the nature of the internet, that there are many people in the world who know me without me knowing them.  It only makes sense with the website reaching a much broader audience than I can personally.  Such is the case with Wata-san. 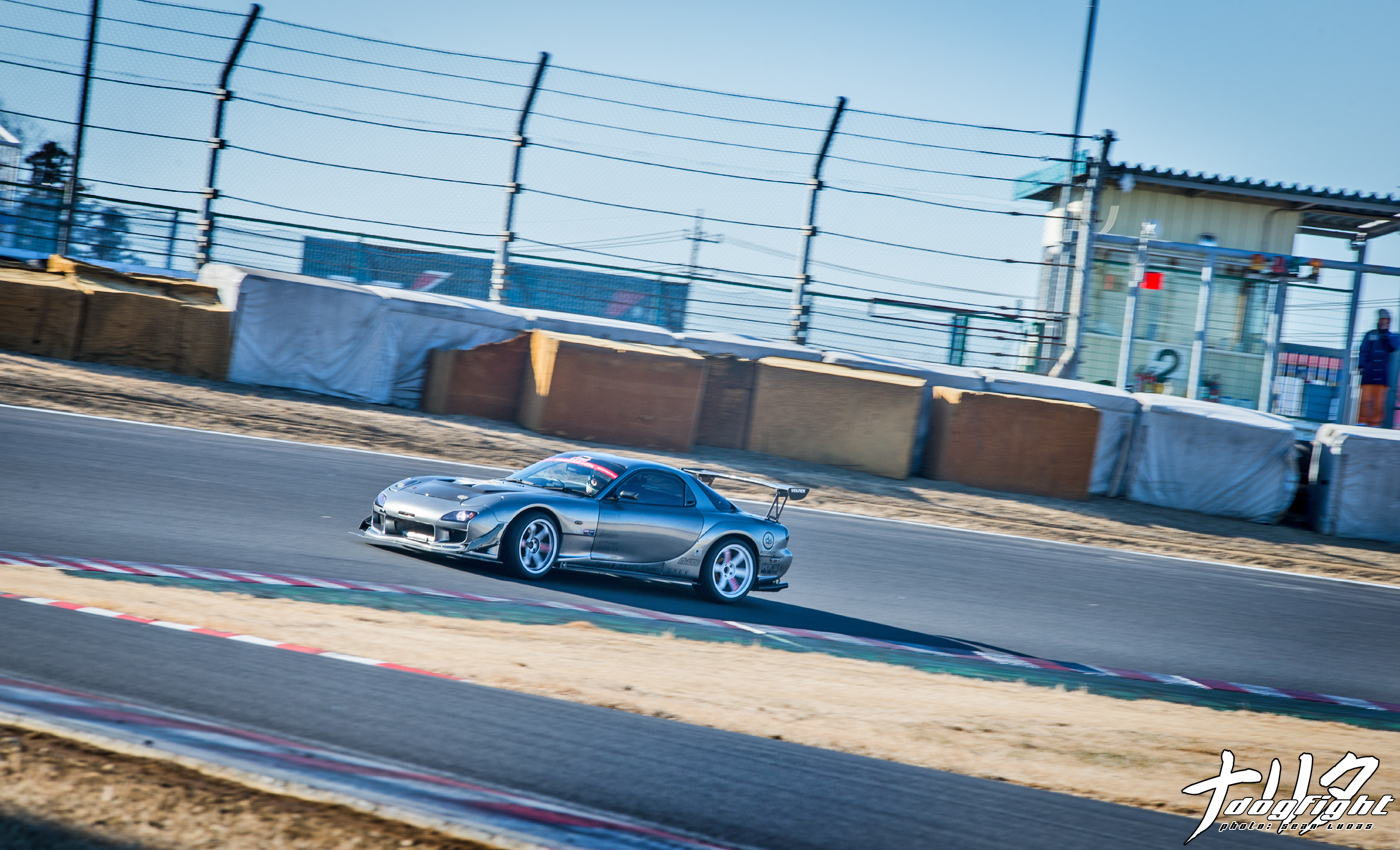 Before I had the opportunity to speak with him, I had noticed his car in the paddock of Tsukuba.  The color and styling of his car, when I first saw it, struck me almost as an older FEED demo car.  However, there were a few cues that told me otherwise. 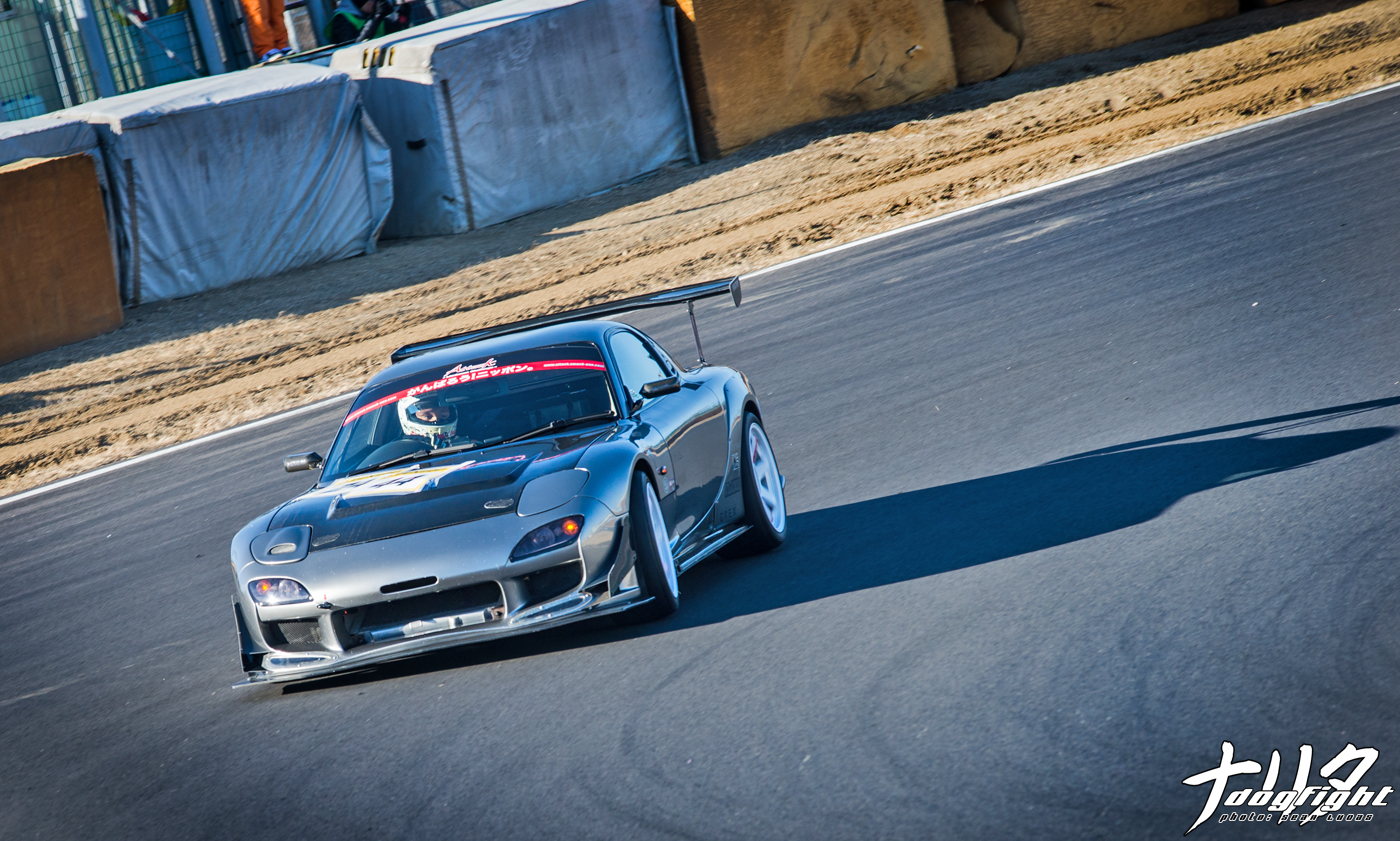 The Craft Square mirrors, the Aerocatch latches holding the RE Carbon Wing bonnet down, the Voltex Type 4 GT Wing; something told me it was different.  Well, after meeting Wata-san, I realized I was correct. 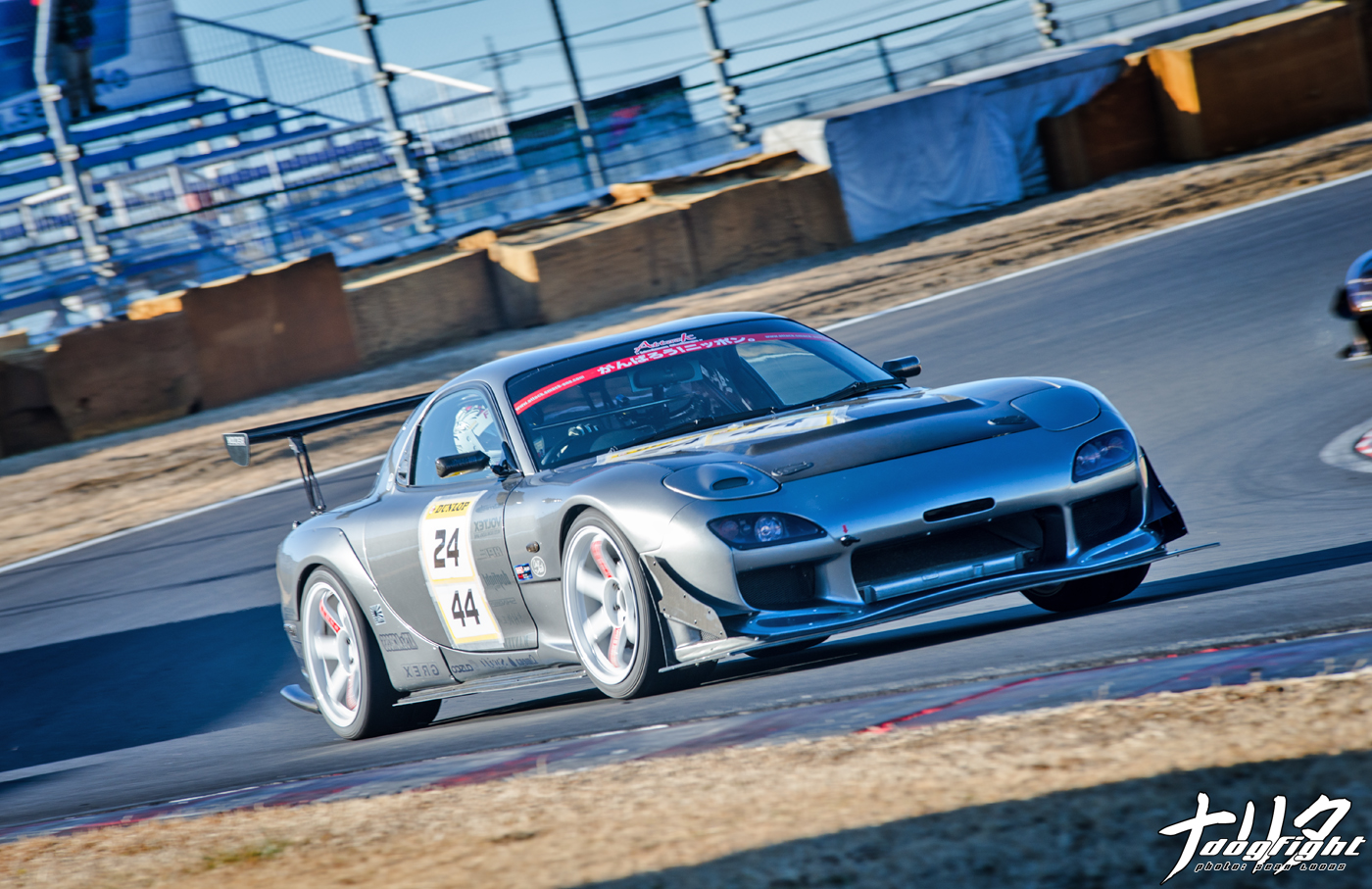 At our first exchange, I realized that Wata was someone who is genuinely interested in improving himself.  Someone who put’s a lot of pressure on himself to improve his driving, and because it’s a shared goal, I think I could understand him a little better. The funny thing is that he already knew who I was.  I suppose through Minkara or perhaps the site, he managed to know all about what I did.  I had become really intrigued at the Dogfight and Yuta decals on his car, and inquired about them.  He had custom made some to match his exterior due to the difficulty in translating an email to me in English (to which I was totally fine with). 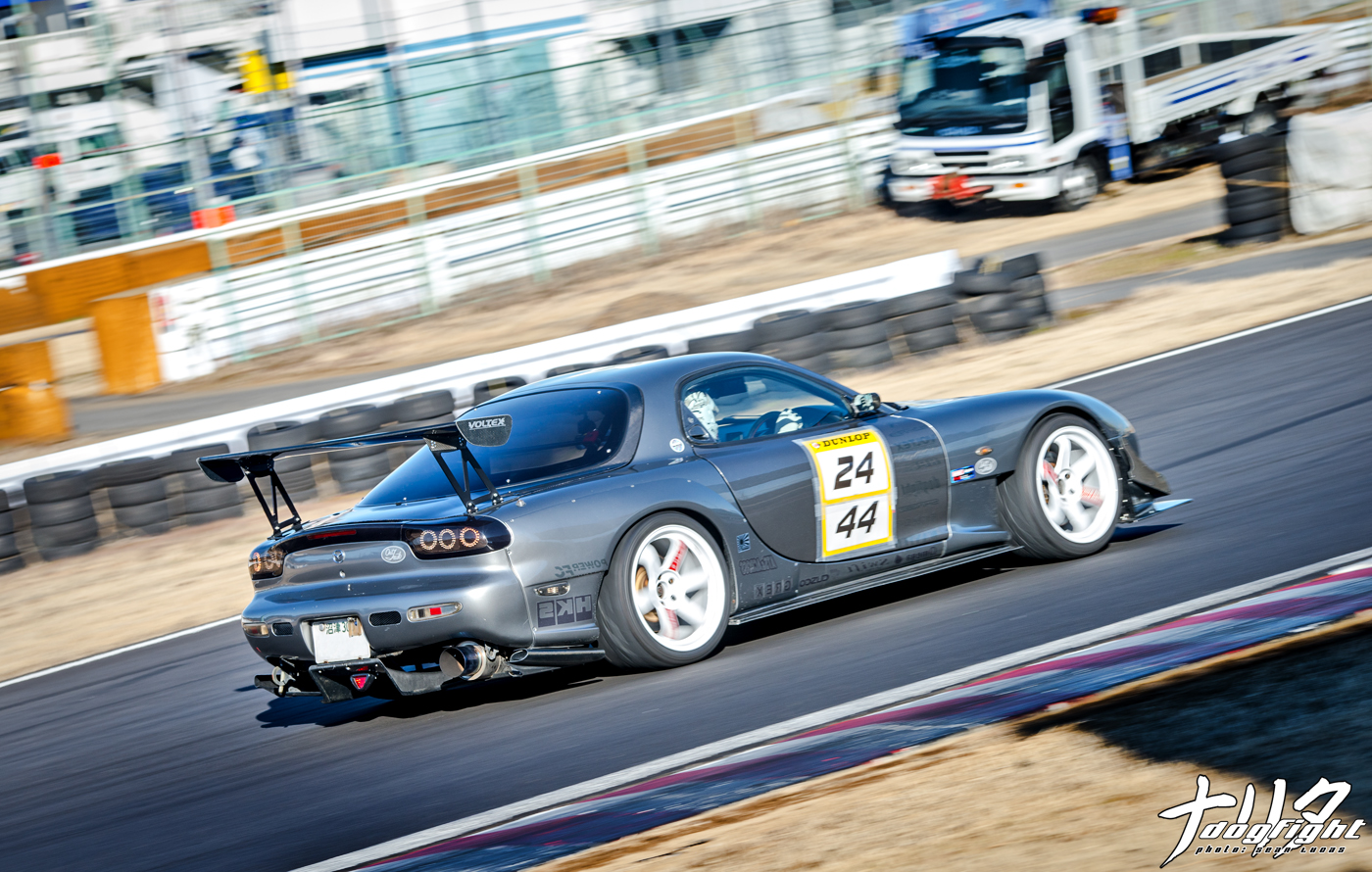 On track you can almost feel his drive to achieve personal goals.  Watching from behind the foam around TC2000, I could hear the HKS T04Z turbine spool up with each corner exit.  All 500hp being expelled from the ported rotary engine as the FD made for the next complex of turns. 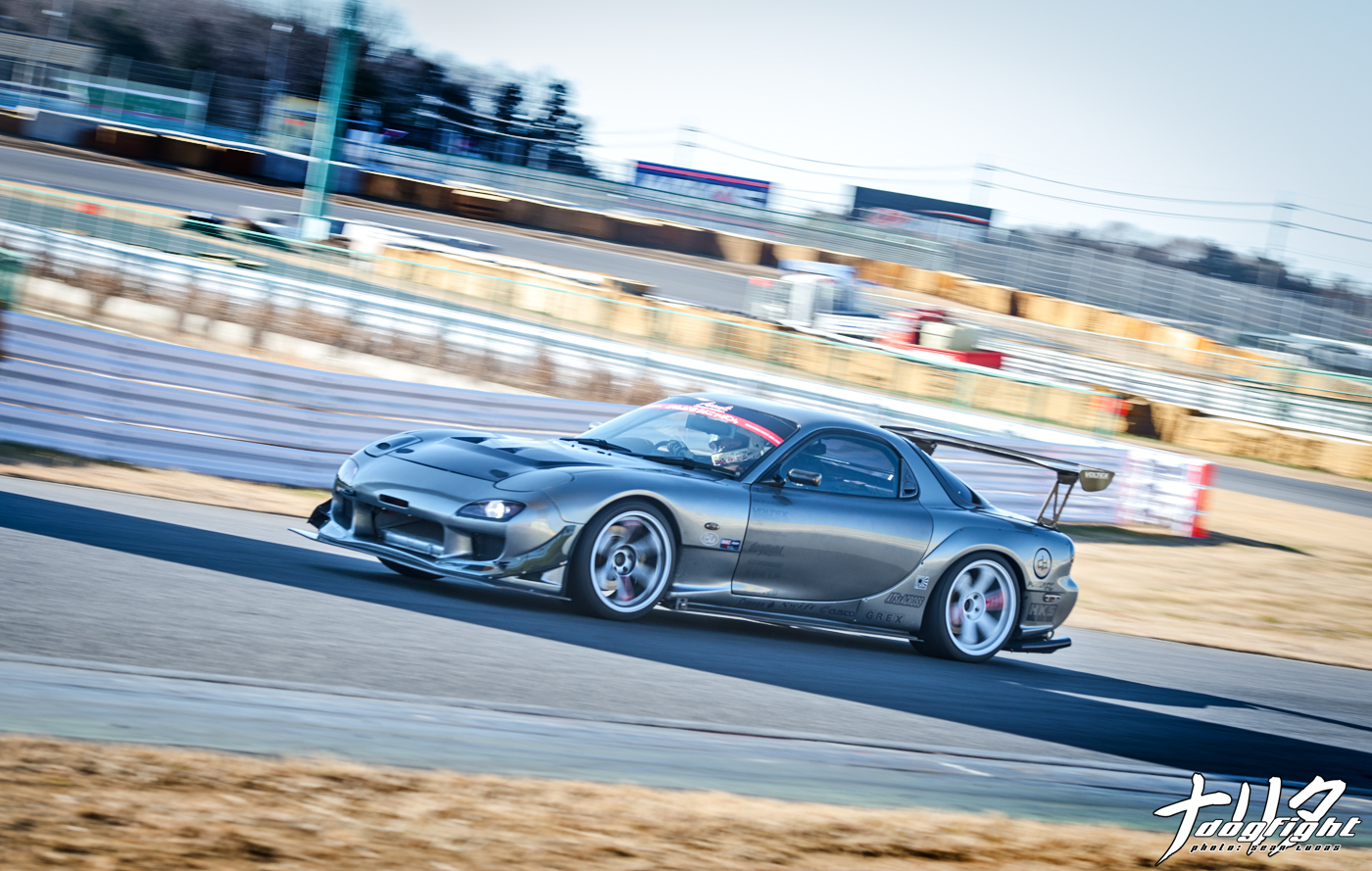 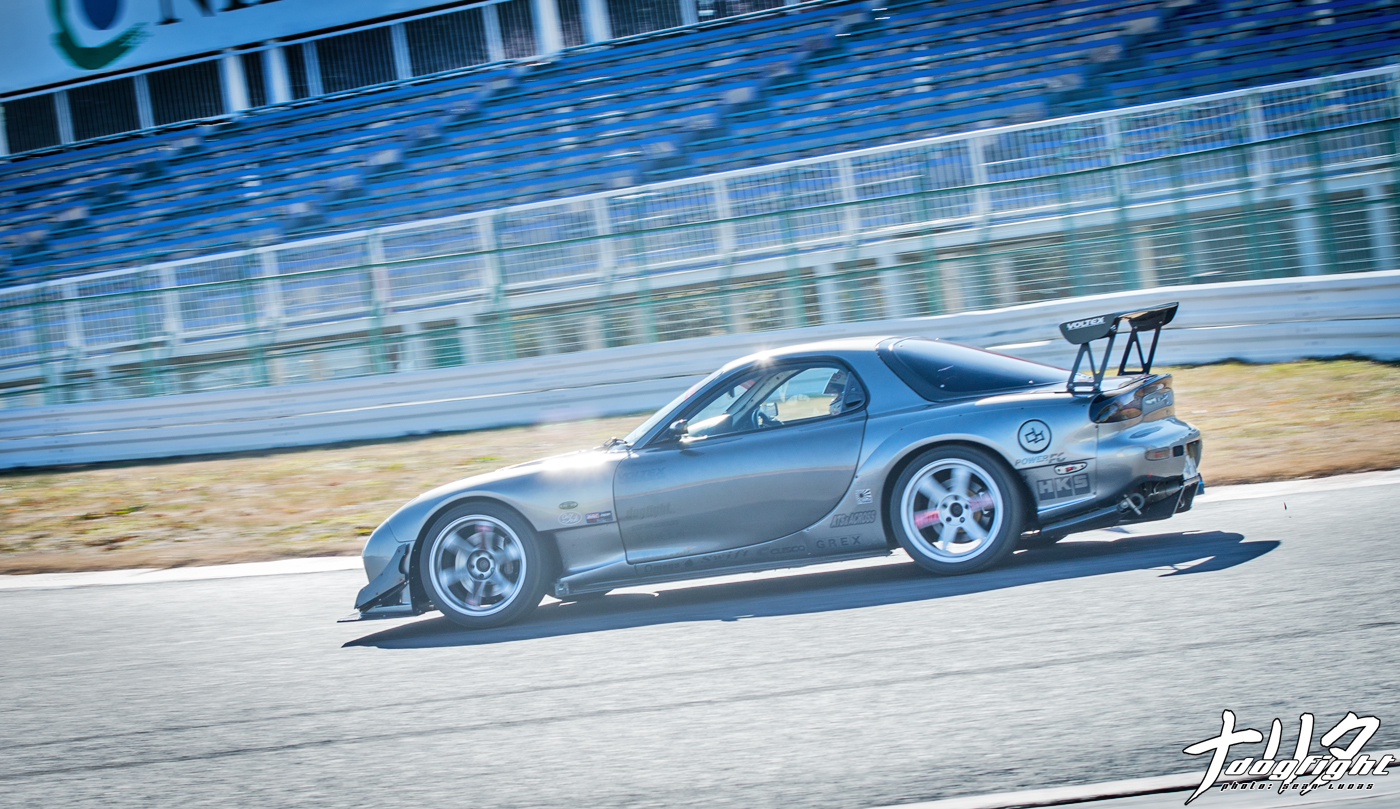 The morning sun of Tsukuba shimmering off the gunmetal paint of the FD as it rounds the course. 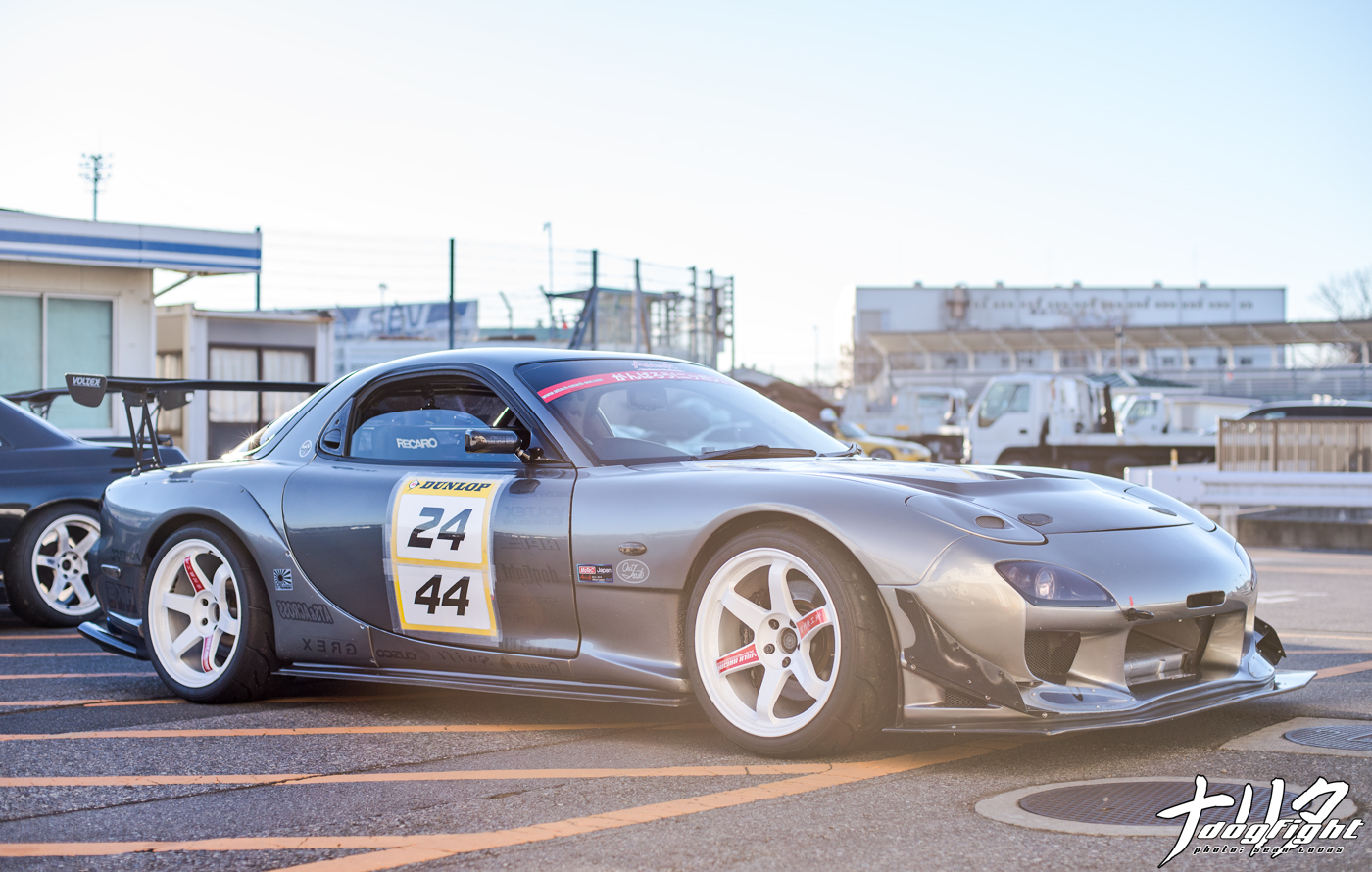 Back in the paddock I had a moment to appreciate the simplicity of the build.  The mildly tuned exterior mirrors that of the engine, as the upgraded turbine, V-mount, and titanium exhaust completes the extent of engine work.

While the FEED aero kit ties together the outside of the car in a very street fashion. 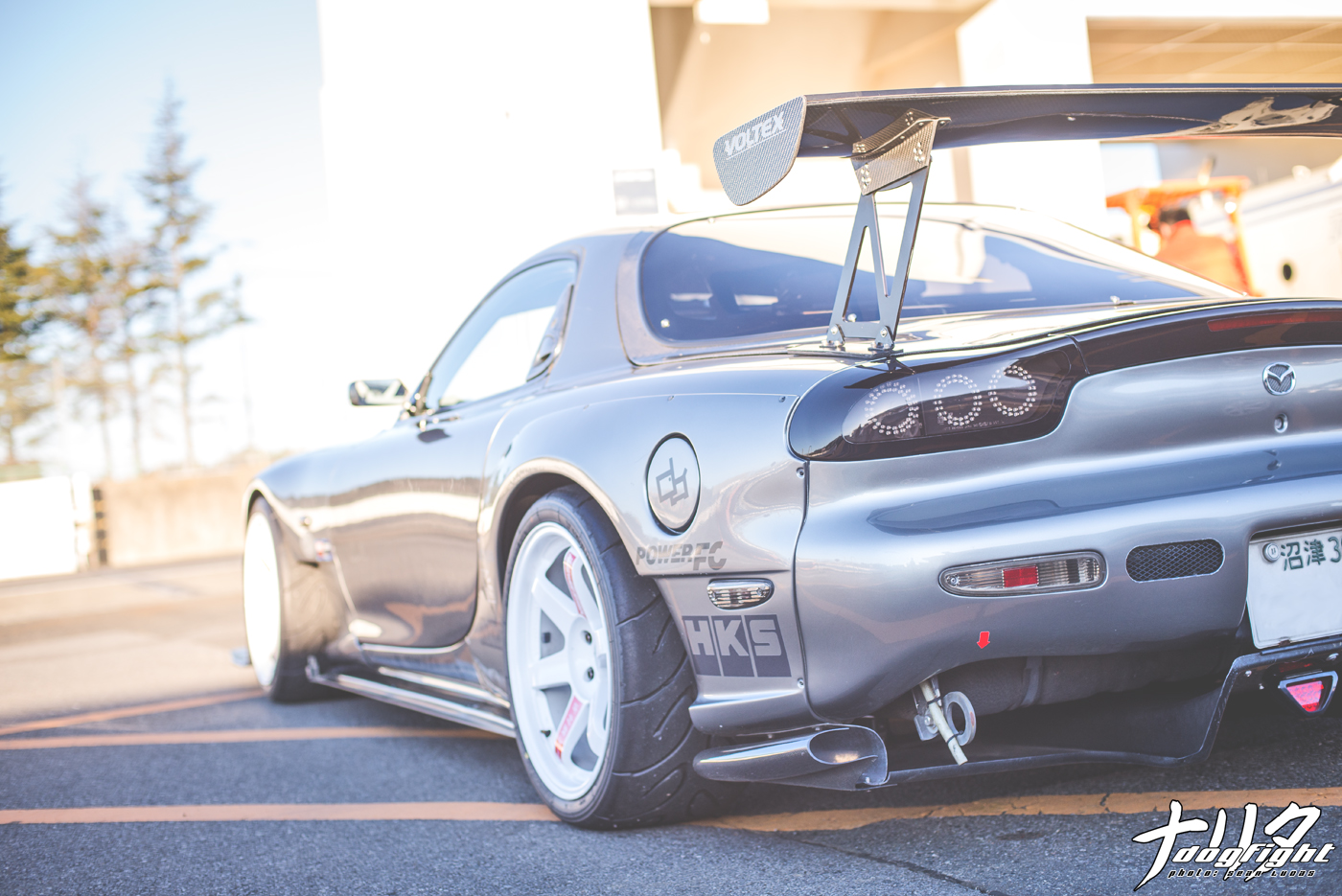 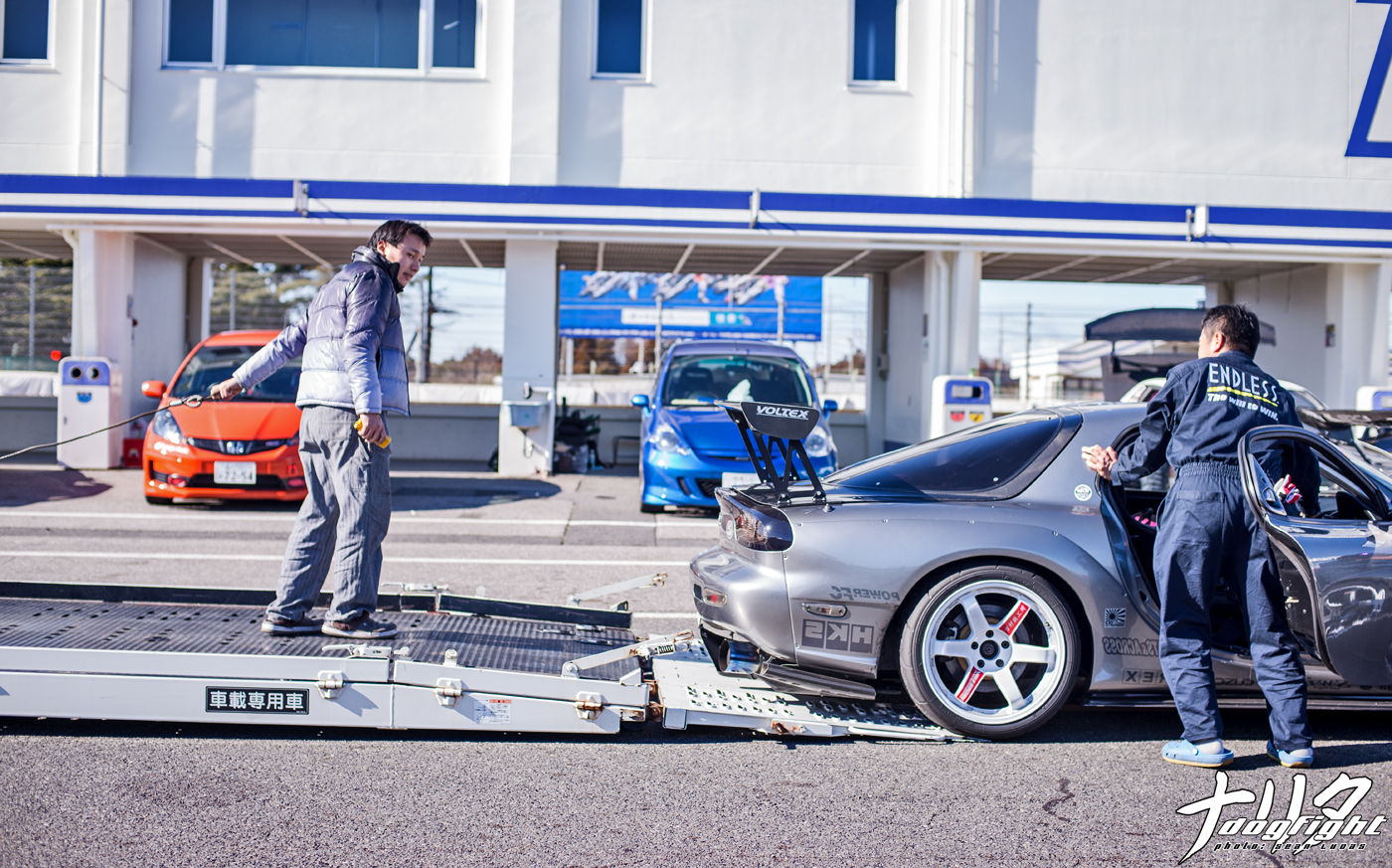 During his final session, Wata had a slight off that somewhat rattled his nerves.  Having acquired a new personal best, there was really no need to continue; and the event was coming to an end anyway.  With the help of his friends, they loaded the FD onto his flatbed. 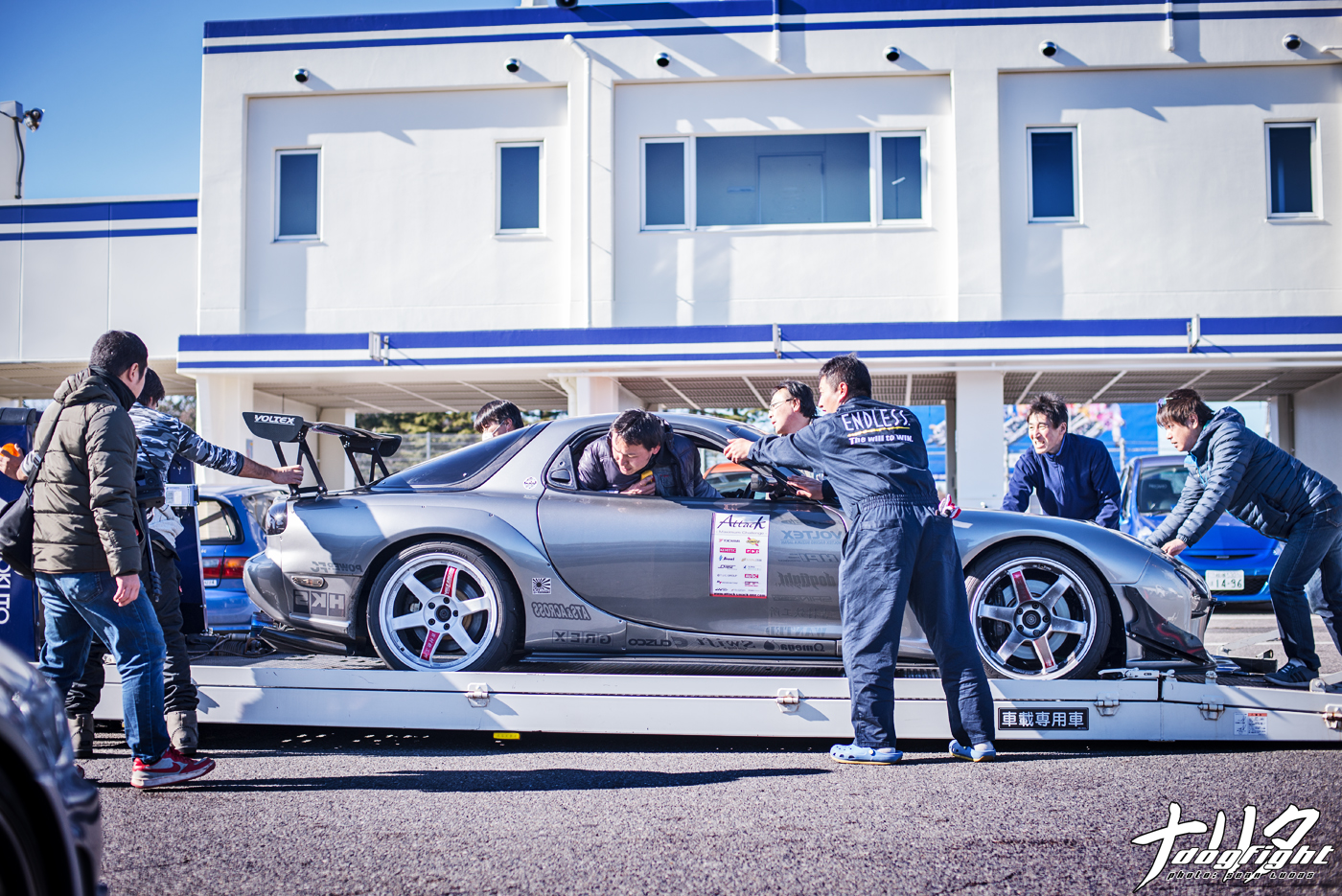 Which left me, once again, wondering why we can’t have these trucks in the US. 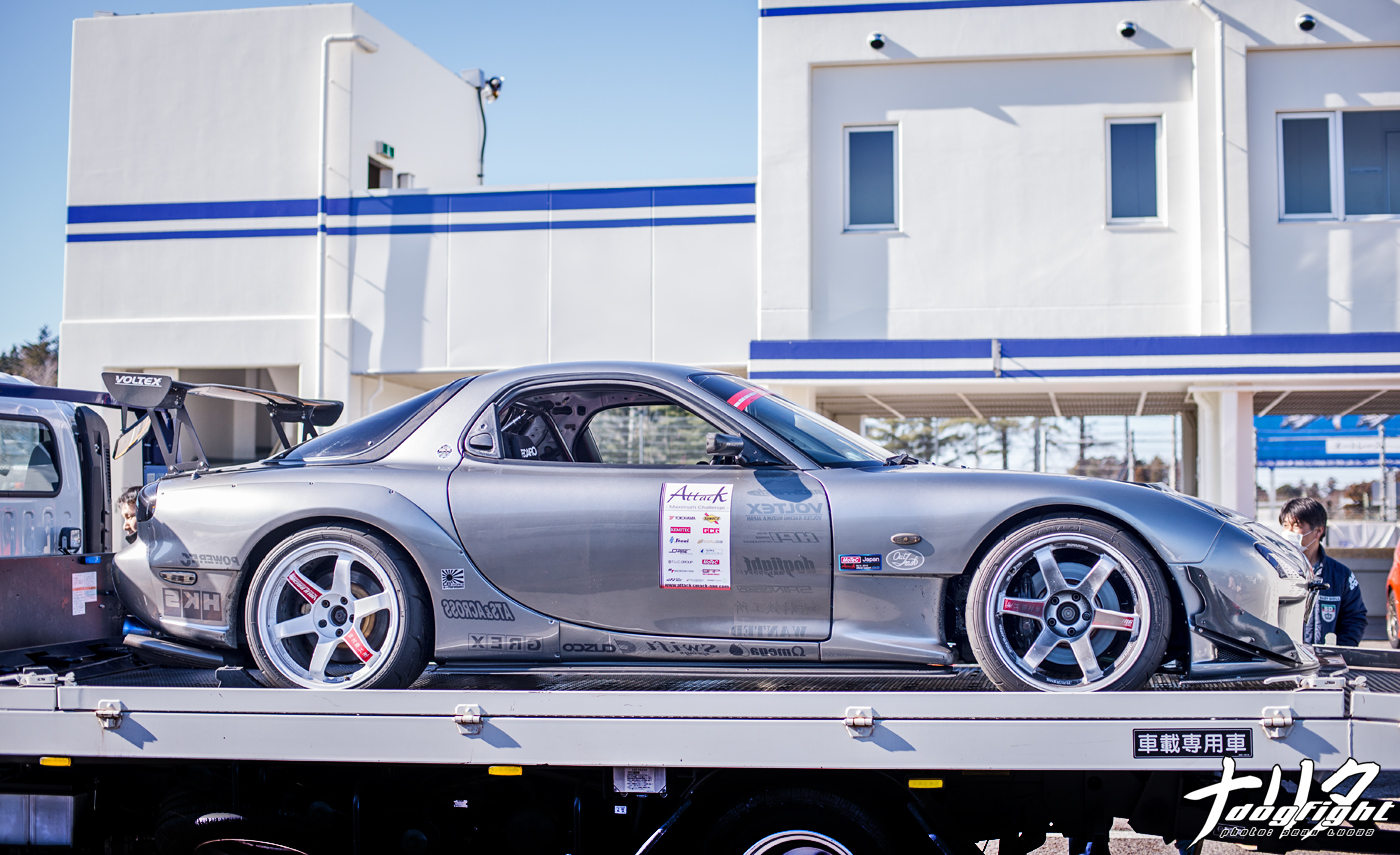 Loaded up and ready for the drive home to Shizuoka. 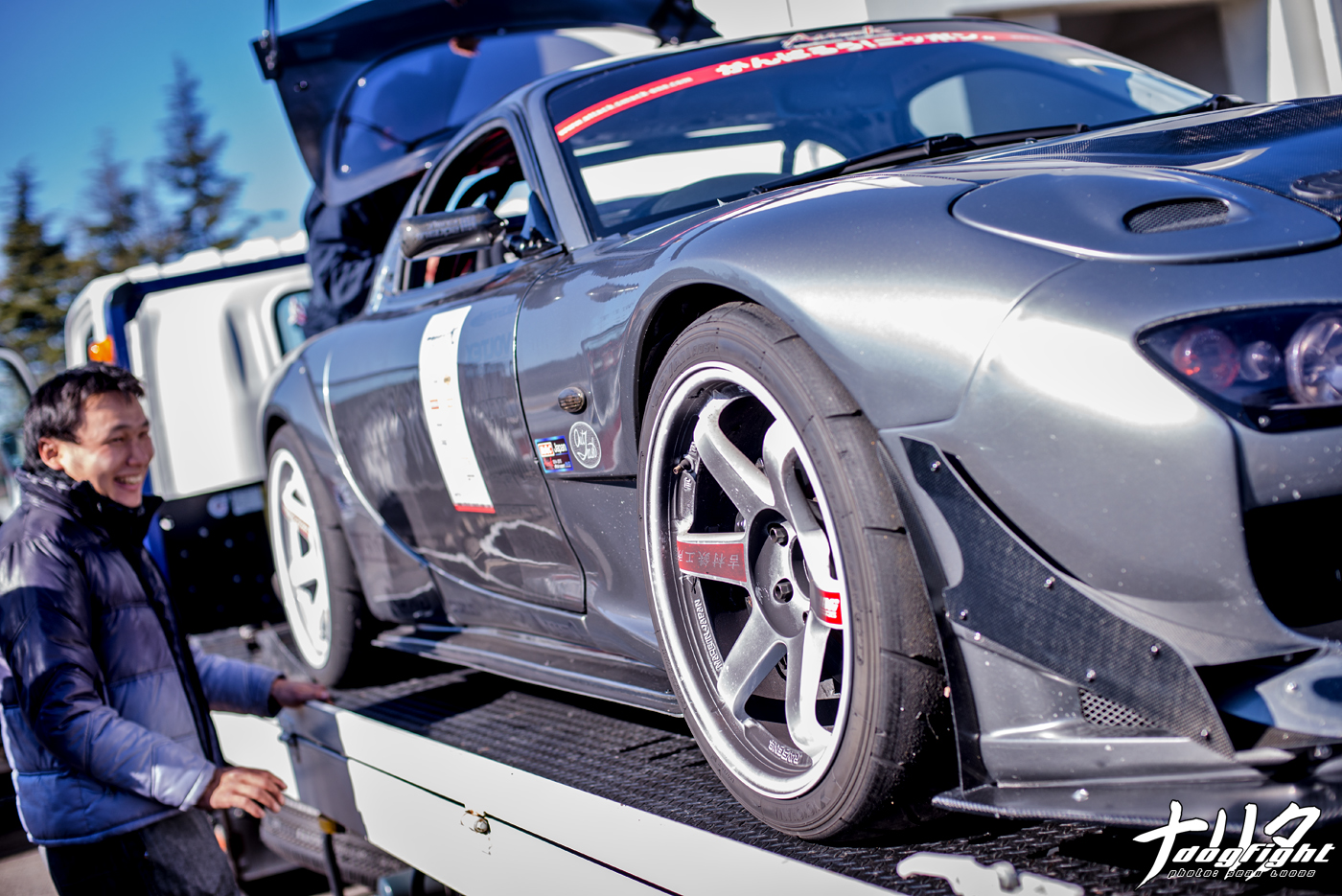 One of my favorite shots that I took this day, as it captures the personality of the car and the owner almost perfectly; and for the most part, nearly everyone who participates in Evome.  Despite the difficulties of the day, Wata is all smiles at his achievement and the fact that he can take his car home in one piece.

Looking forward to next year’s season to see what unfolds for this duo.