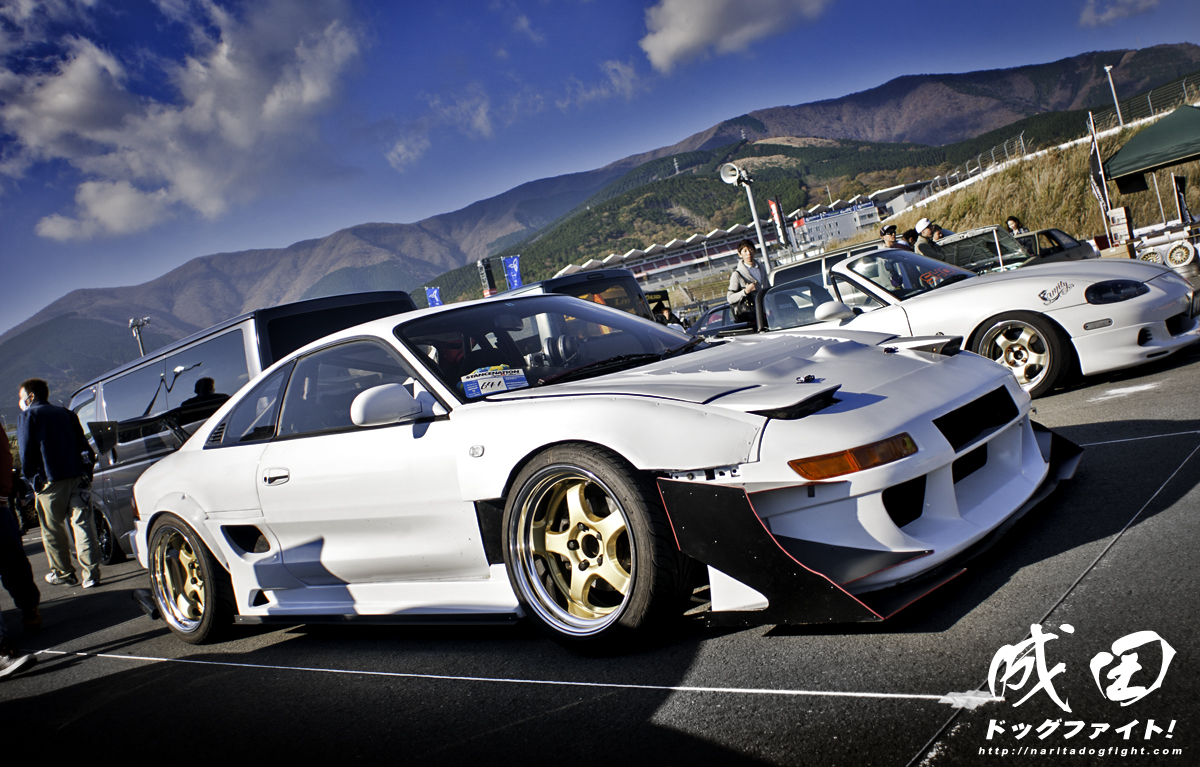 Well, I bet you didn’t expect to see coverage from the Stancenation G-Edition show on this site…and neither did I!  I know this coverage is more than late, but it’s been kind of a fun post for me to put together.  Attending this show was actually a nice surprise, and I got to see a lot of friends as a result; which, when it comes down to it, is the only thing that really matters to me.  We were a few miles away at the annual みんカラ Meeting earlier in the morning, and didn’t particularly plan on stopping by the Speedway, but I got a few messages from friends that were there, so we decided to stop by as we were very close.  It was great seeing a lot of the cars in person that we normally see on the internet on a regular basis.  Like Saito-san’s S14 above… …and others like Sasamoto-san’s Y33; which was on a set of Rezax that day.  Really like this car, especially the vinyl on the rear quarter panel. Sano-san was present and getting quite a bit of attention.  His FD seems to change every time I see it, and after talking with him for a few minutes, he definitely strikes me as the type of guy to always have new ideas.  His originality is insane!  He let us in on a few secrets in regards to a new engine soon…but I’m not allowed to disclose anything ^^ Of all the cars in attendance that I was able to see, Masakazu-san’s SW20 was probably my favorite out of all.  For obvious reasons; this car is aligned with my tastes perfectly.  Thanks to Elvis for getting me in contact with him as well. Yasutaka-san’s USDM styled S2000.  If you follow Joey’s blog, The Chronicles, I’m sure you’re aware of who Yasutaka is and his association with Tactical Art. I had an opportunity to see him at Joey’s 5th year anniversary meet, but it was still nice catching up at Fuji. It was also neat to see Keisuke-san’s Scion that was adorned with a catalog of HKS parts. This guy must have just come from Las Vegas… Of course 326 Power had a strong presence.  They had a pretty cool booth set up with a whole bunch of different sedans on hand. These two Toyota’s from ‘Kandy Shine’ had matching glitter pink paint.  Hard to tell in the pictures, but it was actually very cool.  It also reminds me of a live performance of this song. This R32 has been gaining quite a bit of exposure lately. A R32 I’m sure you’re already aware of; you can’t get much lower than Naoki-san. This RPS13 looked pretty track ready with the decent amount of aero it had on. Awhile back I made a small post on a couple of the Garage Mak cars that were in attendance.  You can check it out here. The LEVEL guys had a large showing with all their S2000’s.  I remember sending a LINE message to Vincent while I was here as he’s friends with a few members.  You can check Vincent’s S2000 out in the newest Import Tuner! Even outside the show there were some really cool cars to check out.  I really liked this hatch on TE37V’s.  Very simple, very clean. Even though it was missing some flares in the rear, I was completely in love with this car.  I wish I had some more time to wait around for the owner… This Gloria was sitting all by itself on a nice set of SSR SP1’s, so I had to take advantage.  Fuji’s lots make for some cool backdrops.

Well, hope you enjoyed what little coverage I had.  Maybe you saw something you haven’t yet, maybe you didn’t – but if you want to see more, there are plenty of sites with great coverage.