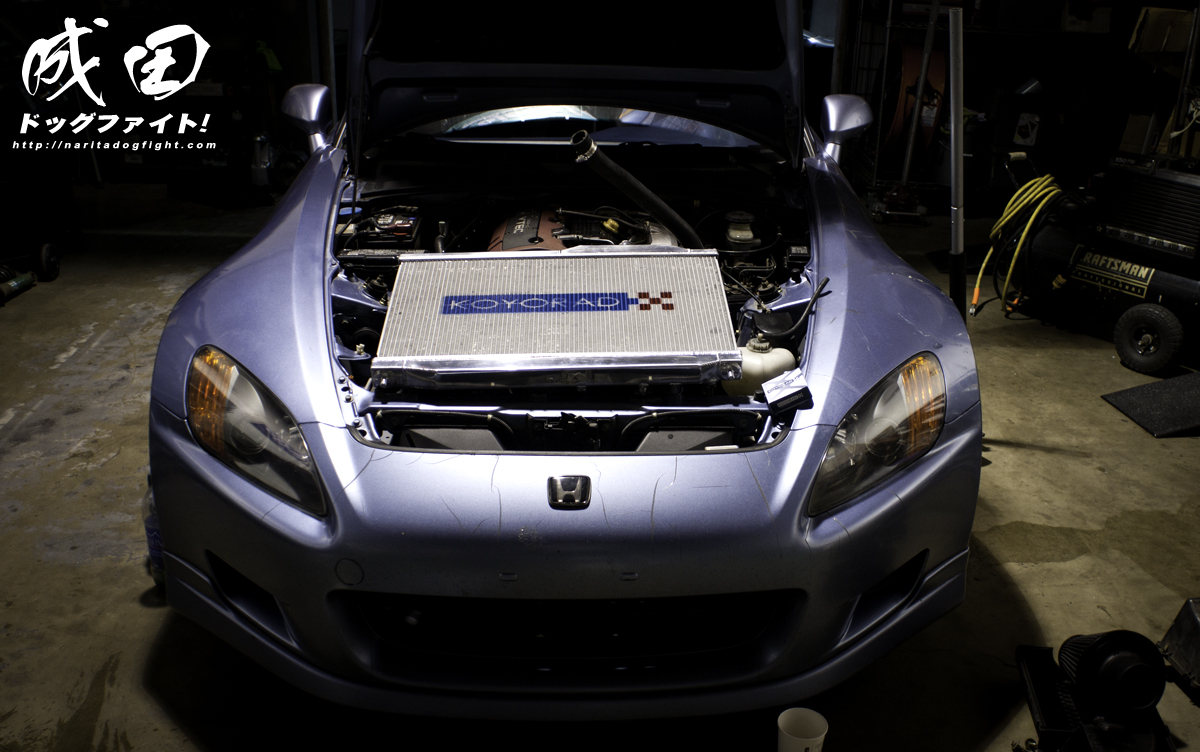 As you may, or may not (probably this one) know, I (Sean) have a S2000.  It’s a work in progress, and there is a whole list of things that need fixing, but all that aside I’ve been having a really fun time building it.  There’s a certain feel to this car that I can achieve that I’m not able to get with my civic.  Because the civic is used for time attack, I’m not able to have any neat interior bits or even a stereo for that matter.  The theme to this car, of course, is the emulation of a Japanese street car.  Eventually the plan is to drift this car (Kobayashi style), other than the street of course, but in the mean time I need to button up some loose ends.  One of those loose ends being in the cooling department. I suppose, with it being Thanksgiving, this would be an appropriate time to make a post like this.  Koyorad’s support has always been awesome, and Scott is always there if anything is needed; for the Civic build as well.  On top of all that, their product is top tier.  You’d be hard pressed to find quality like this elsewhere.

So, these photos were taken a few months ago before this product was actually released into the US market.  What you’re looking at is Koyorad’s new 36mm Hyper Core S2000 radiator (#VH081226).  Once only available in the Japanese market, they’ve make the decision to replace the older US version (#R2344) with this one here. The new Hyper Core replaces their older 53mm version; this is advantageous in a few ways.  One, for all you weight junkies out there (myself included), there is an obvious weight difference in the thinner core.  Secondly, the new core’s increased fin count combined with the reduced width, increases both circulation and heat dissipation.  The thin core helps combat heat soak which is typically found in thicker cored radiators.  Don’t worry, I didn’t damage the fins when I took this picture… This post wasn’t intended to be a DIY but rather more like a comparison to the OEM unit.  My radiator was actually replaced very recently before this, as the previous owner fucked up quite bad and overheated the engine; which is why I also have a misfire.  So if it looks like the OEM unit is brand new, it pretty much is.  Here’s a look at the OEM unit with fans attached. A side by side comparison with fans off. Comparison of the OEM Unit and new Koyorad length wise.  Here you can really see the obvious visual difference in core size. I wish I had a 53mm core one to compare as well, but just imagine it about 1/3rd large than the Koyorad. A close look at some of the ports.  You can really see the quality of brazing here, as well as the increased fin count. A shot of the Koyorad with OEM fan units attached.  Everything literally lined up to OEM spec.  It’s not too often you see an aftermarket product fit with OEM precision.  Although, it shouldn’t be too surprising as Koyorad makes many OEM radiators for manufacturers. I felt the need to have a ‘working’ shot, so I had Kam and Yuta pretend to be doing something…because, really, you don’t have to vacuum the radiator before you install it.  But you do have to vacuum up the radiator fluid Yuta spilled…and Kam was actually cleaning the fans.  So I guess, we didn’t really have to pretend after all… A shot of the unit in the bay with hoses connected. A couple shots of it completely installed, and intake assembly put back together.  Kam painted my radiator stays in Maziora paint because, well, it looks cool. The final, fully assembled shot.  This was pretty much the easiest install I’ve come across; it’s literally a direct OEM replacement, down to the sensor.

Many thanks again to Scott and Koyorad for the awesome support; it’s been a great experience working with them and I’m glad I could provide a test bed for their new product.  I’ll include some information below; feel free to email me, or visit Koyorad if you have any questions regarding the product.