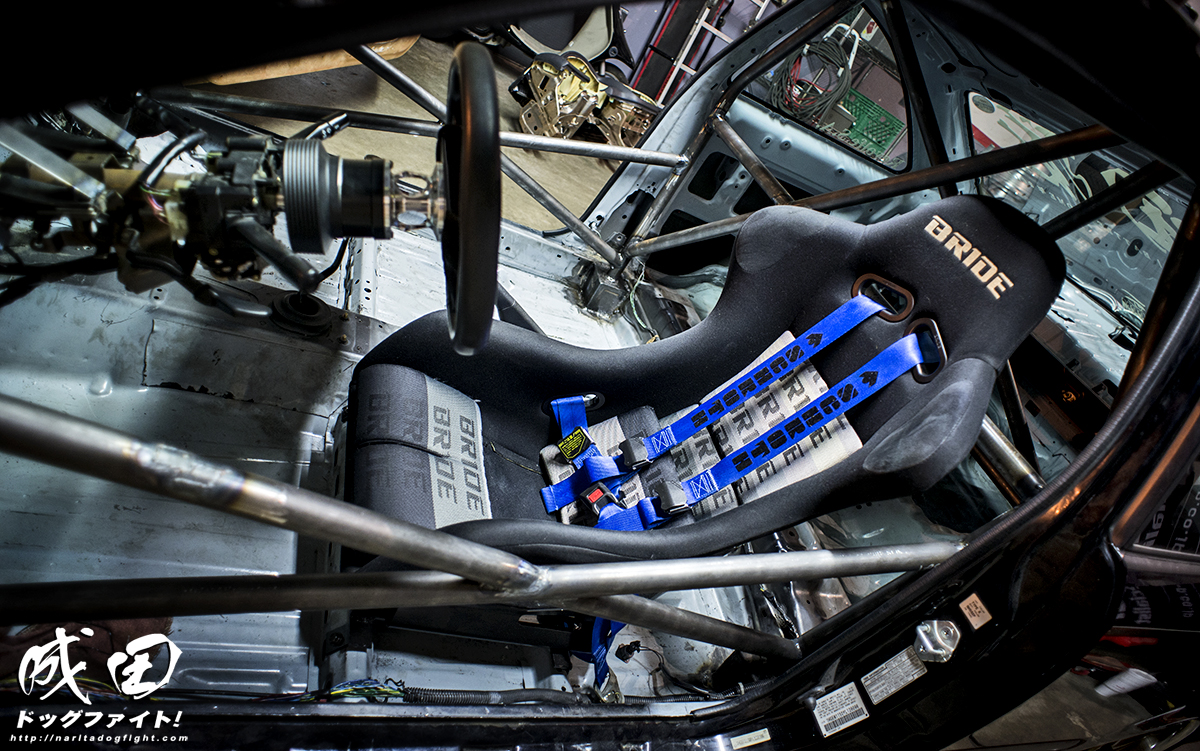 I’ve been overdue for an update on this build for awhile now; even though not much has happened since.  This past Saturday Jay and I drove over to Bardabe’s place to finally wrap up everything and drive the car back to NORUSH.  The biggest accomplishment to report is that the cage is complete – which is why I was able to bring it back to our shop.  Bardabe did an awesome job on the cage and was able to successfully, and safely, create the cage that I wanted.  We even ended up creating a custom steering column bracket to set the steering wheel in the perfect position for my driving.  If you’ve ever tracked a Civic, you’ll know that even when you space the column it still sits pretty high if you have a low seat rail. Bardabe surprised me with a TIG’d in Yuta dog on the driver’s side door bar…so even if I don’t have a Yuta sticker on my car, he’ll be there to watch over me.  Should look really cool when it’s painted. A shot of the cage from the rear. So, a lot of what happened from when we left Riverside around 4pm to when we got back to NORUSH is not documented.  Needless to say the drive back was super sketchy.  At one point, about halfway down the 91 the car decided it didn’t want to run anymore and the engine cut out when I was stuck in traffic going about 35mph.  I was in the far left lane, I had no mirrors on the car, and I couldn’t turn around because of the harness.  Not even sure how I got it over to the far right, but it involved rolling through 4 lanes of traffic going like 5 mph.
I have no idea why the car shut off.  At first I thought it was an issue with some of the wiring leading to the fuel pump, and Jay thought perhaps it was the main relay.  After about 10 minutes of sorting through the exposed wiring I tried turning the car over again and it amazingly fired up and stayed running.  Instead of taking surface streets we just plowed through the traffic and eventually made it back to the shop. This was pretty much my view for the drive home.  No dash, lots of zip-ties…you know, the usual.  Iwata style. It’s extremely difficult for me to have my car this dirty.  I’m borderline OCD when it comes to keeping things clean – seriously, you should see my house.  So the first thing I did when I got it back was at least to try and vacuum and wipe down the interior a bit; even though it’s getting sanded and painted soon…I still had to do something.

This Schroth 3-point I picked up at Up Garage when I was in Japan at the beginning of the month.  I was browsing stuff and realized that I didn’t have seatbelts anymore and that I should probably pick up a harness.  It was $30 or something hahaha I love Up Garage. We all went to eat some ramen and get some drinks in a celebration of hunger and having the car back.  When we got back I decided to save myself some time on Sunday, to start taking out my sorry excuse for a sunroof plug that I had in there all these years.  Just saying, my car has had a stripped interior since like 2004.  I made my own plug literally like a decade ago, but now that we have the DOGFIGHT parts I was pretty anxious to get it out of there.  The new piece is much nicer – you can check it out here. It’s been awhile since we’ve had a lot of people together in the shop; it was nice. Nidia took my camera and started taking pictures of people. Jay says, “Stay tuned for the next update, because this one was kind of lame.”