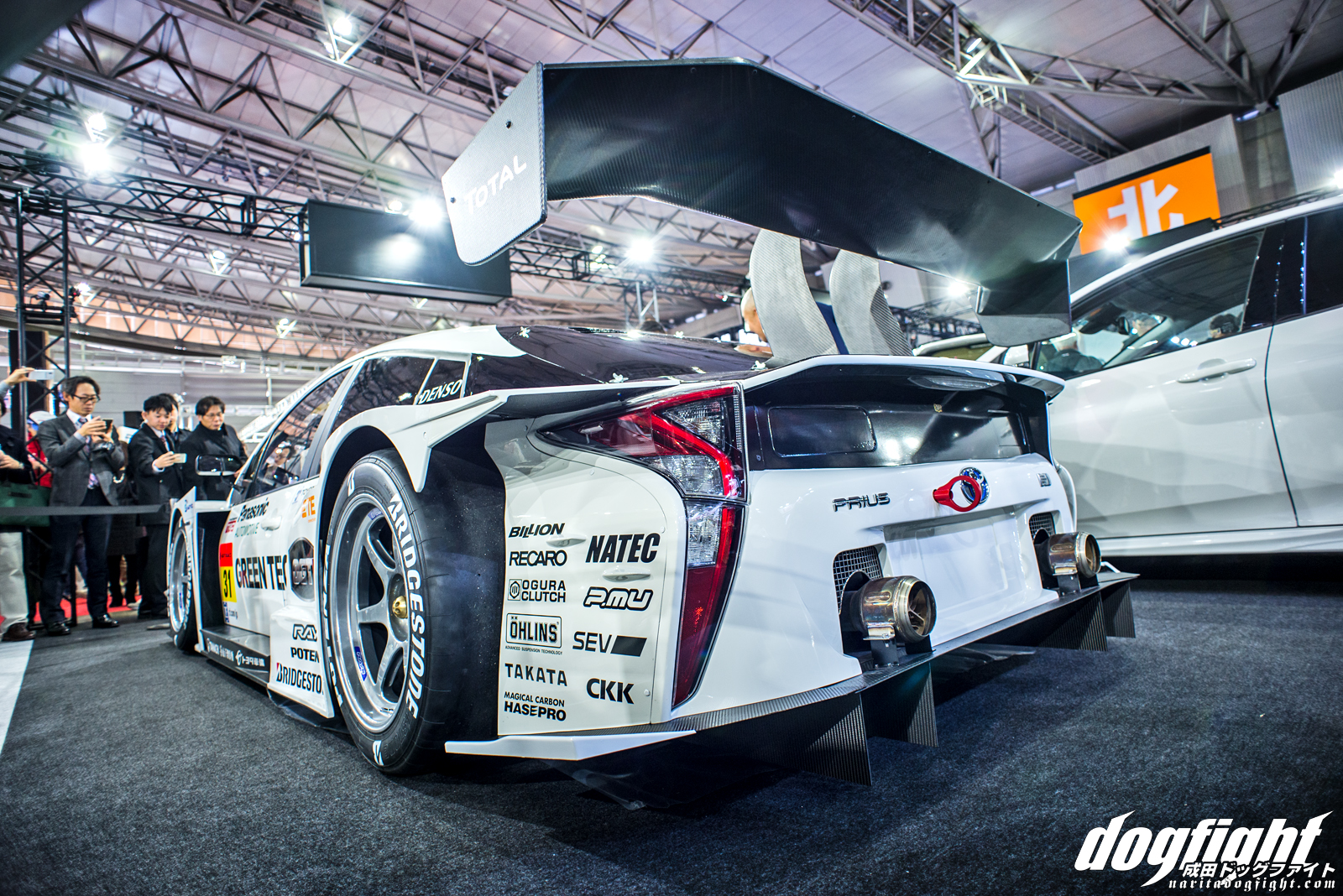 Among the various Super GT cars on display, APR was one to unveil their 2016 GT300 take on the new Prius.  We got a close look at the previous model a few years back at Fuji Speedway; however, since Toyota has released a newly remodeled production version of the hybrid chassis, it was time for it’s older counterpart to be retired.  Unlike the previous model, which utilized a mid-engine setup (as it was built to the somewhat controversial JAF GT300 rulebook), the 2016 will be using the now mandated front-engine setup, as this is the factory engine layout of the Prius.

The Prius, once again, will be using a hybrid system compromised of mainly production parts.  You’ll remember that it’s competitor, the Honda CR-Z uses a variant of the Zytek developed ERS-K (Energy Recovery System), which was also used as a test bed for Formula 1 power unit concepts.  The engine that Toyota’s hybrid system is mated with however, is far from production.  The puny OE motor is replaced with the much larger 3.4 liter RV8K 8 cylinder counterpart.  It’s always interesting introducing a new chassis to motor sport, but with Toyota’s history in Super GT I can expect nothing but great things from the new variation. 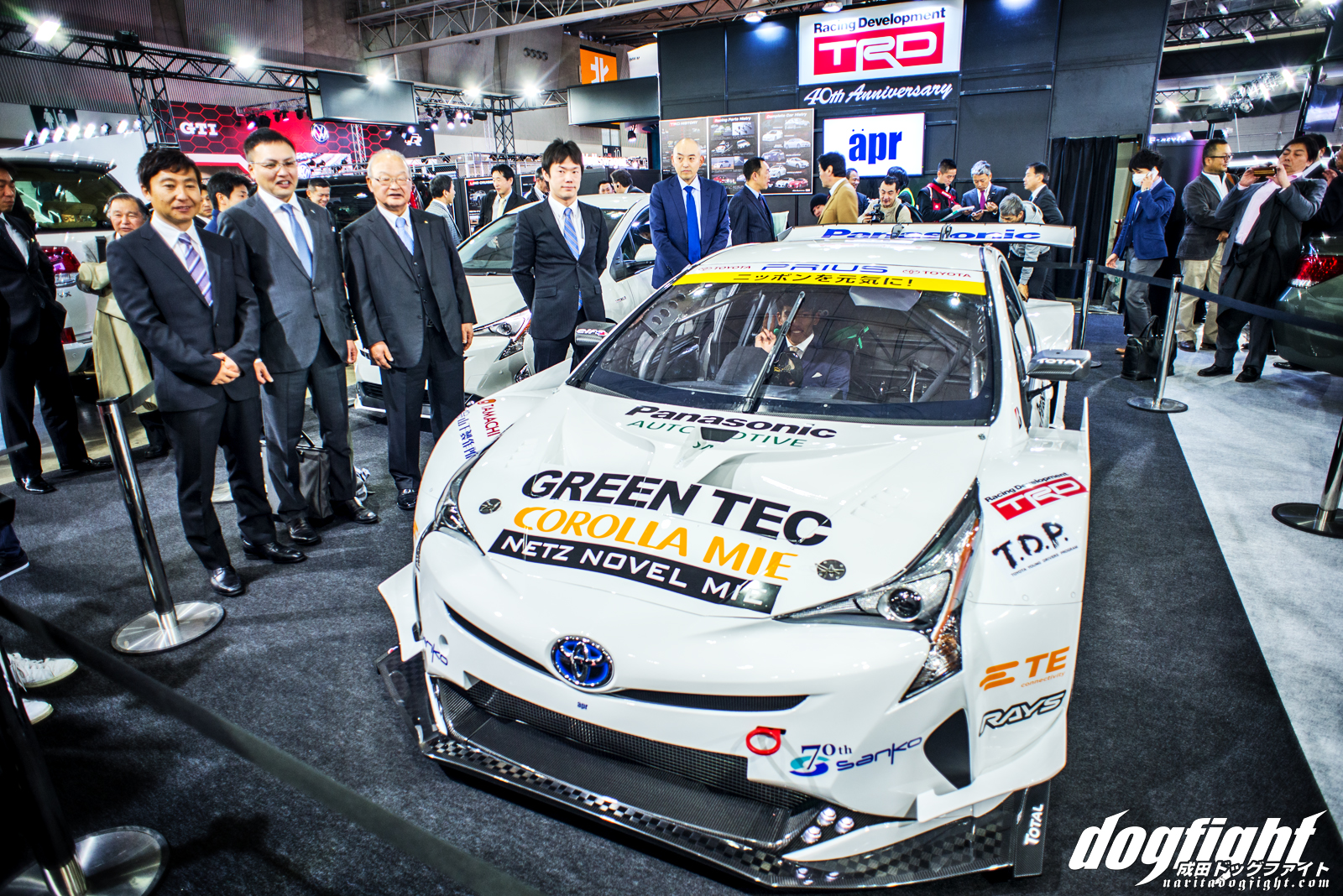 Many Toyota Racing and APR executives were on hand to deliver the car to the public.  The drivers campaigned for the 2016 season were also on hand taking turns behind the wheel. 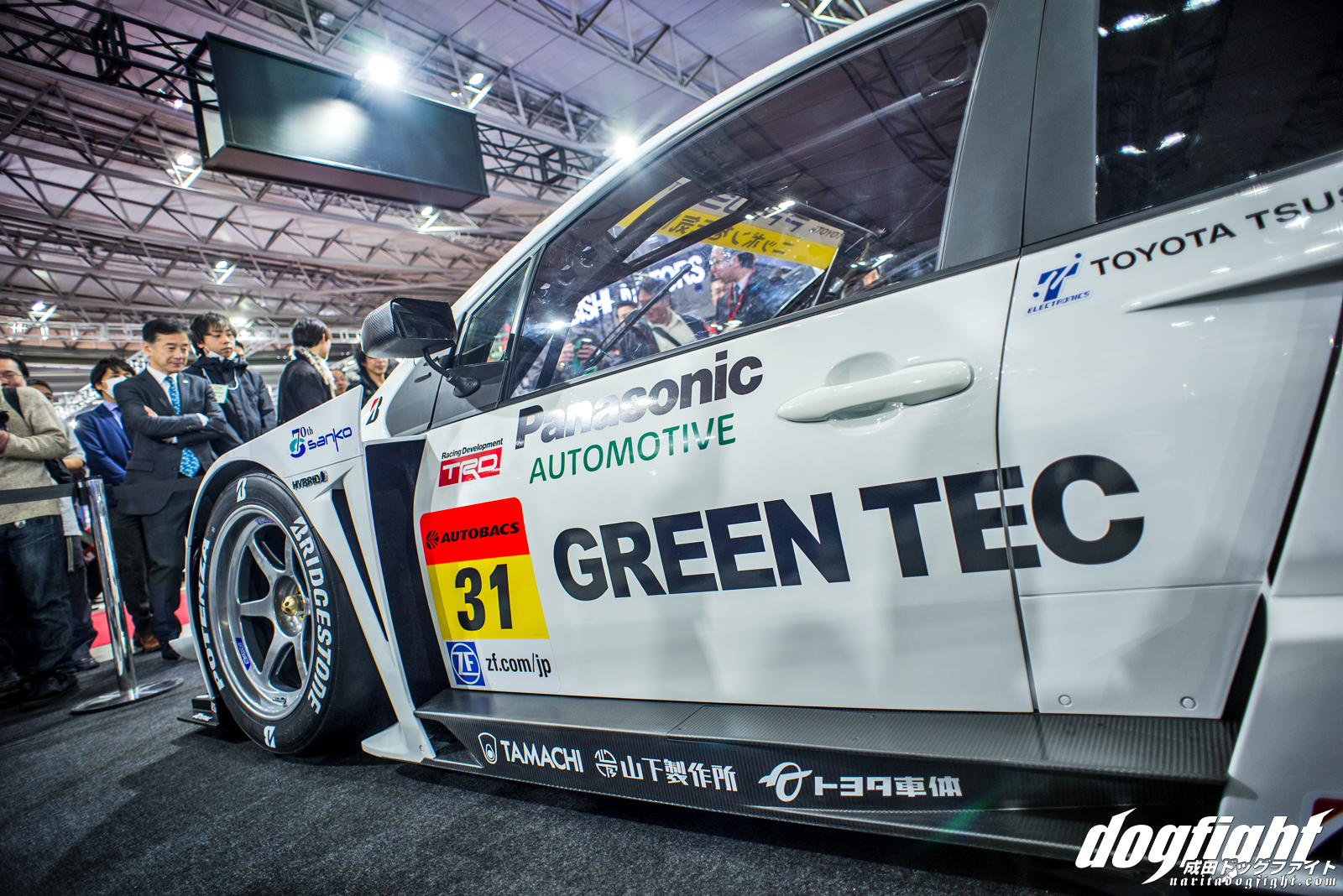 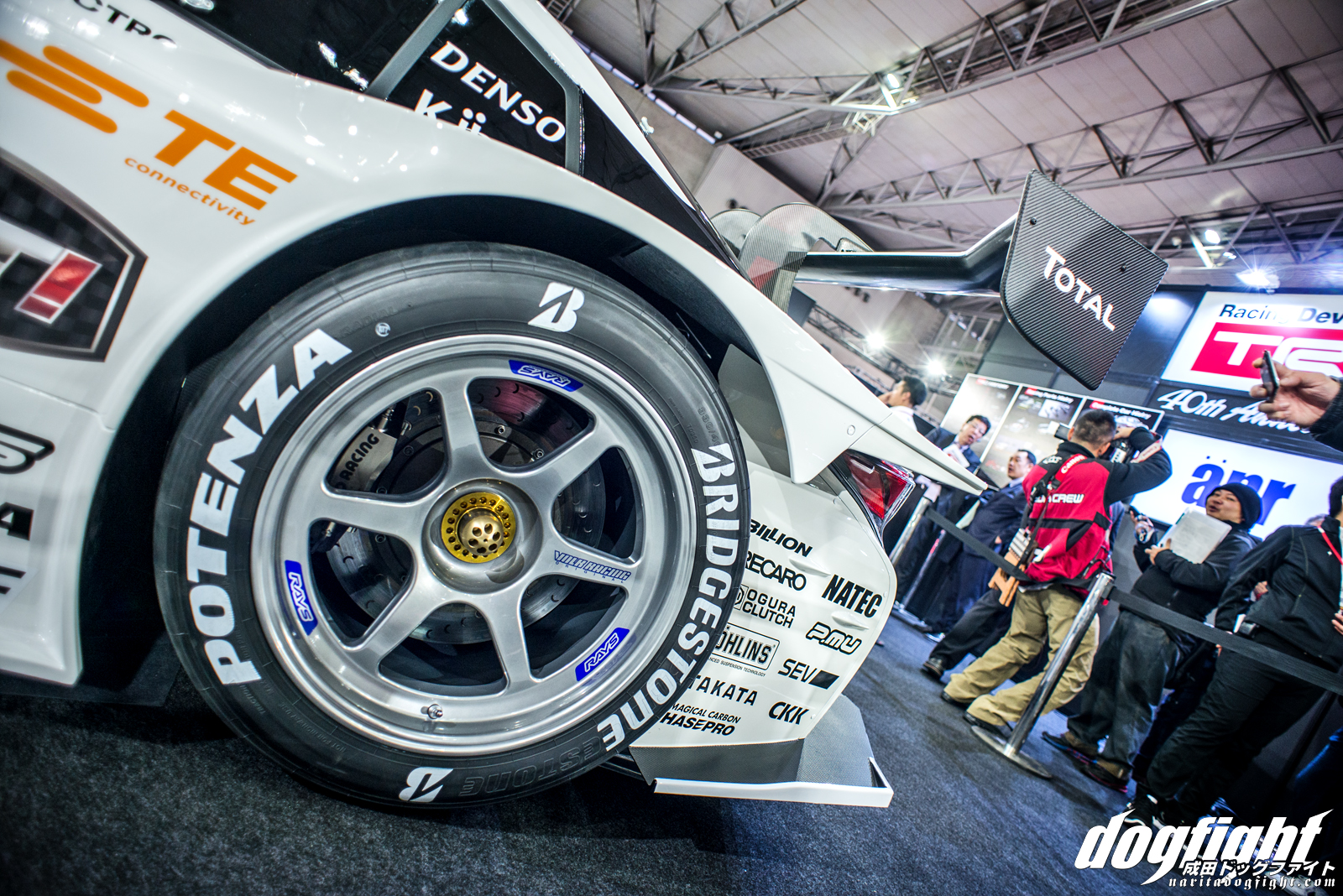 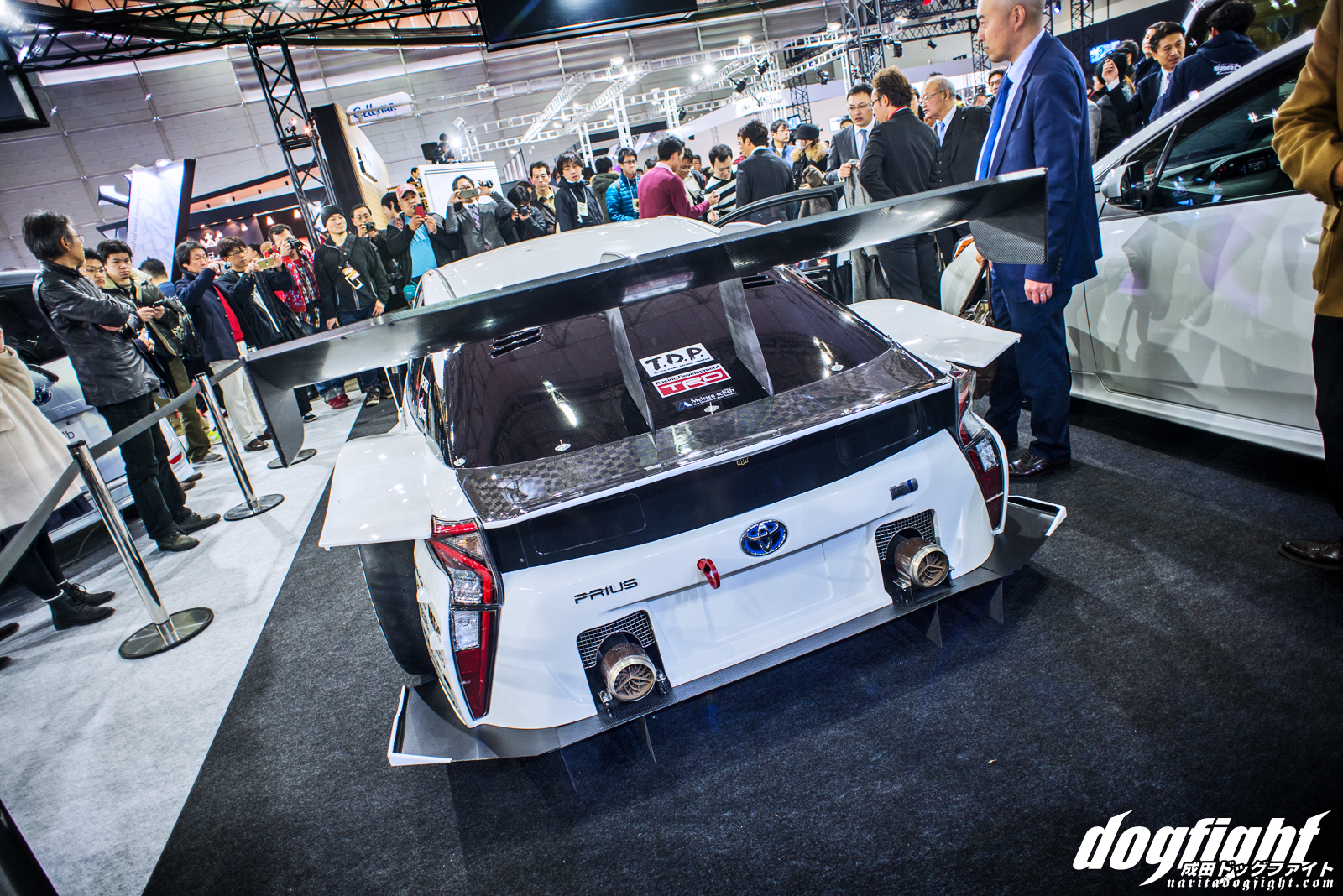 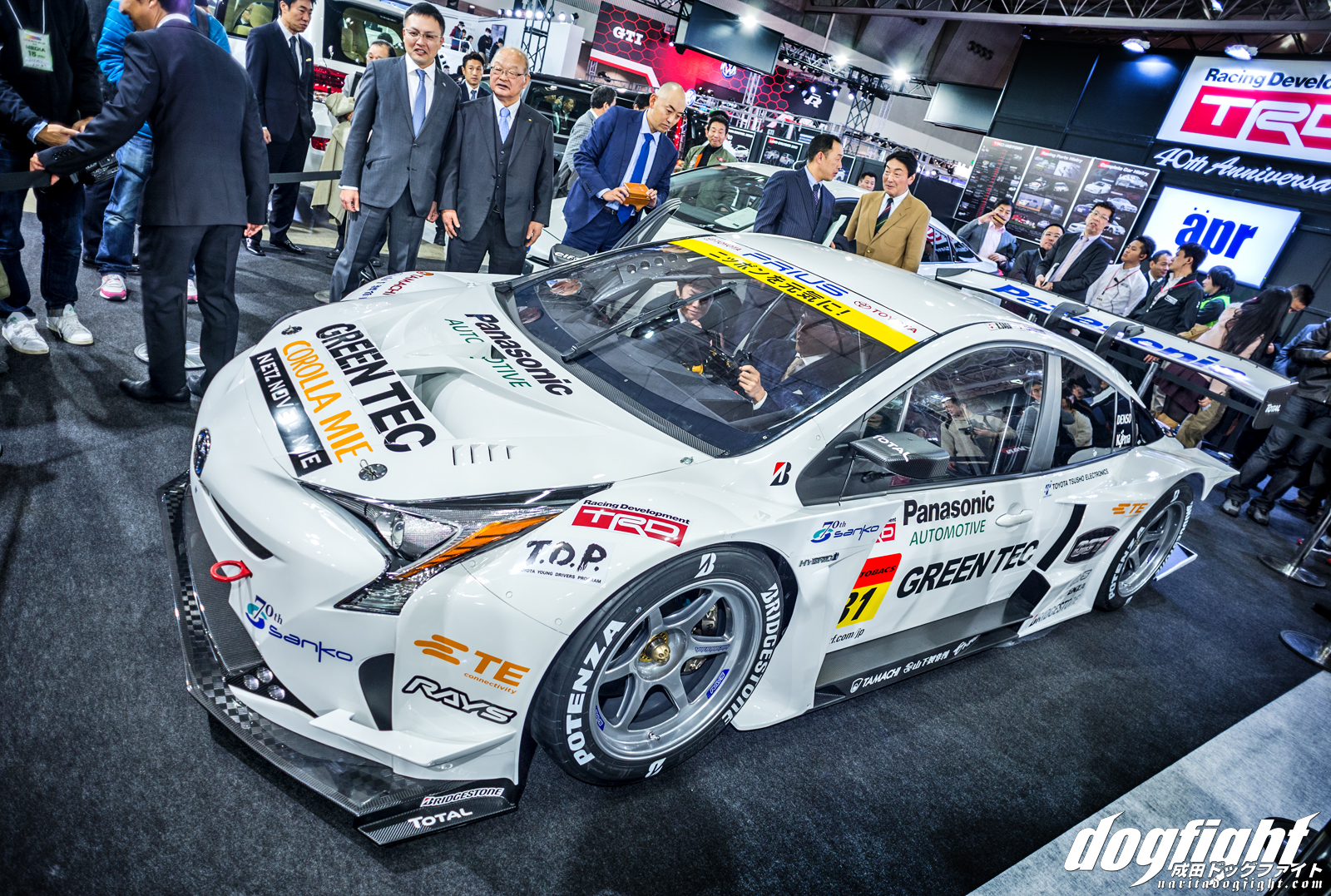 Below is the press release that Toyota issued at the end of last week regarding the unveiling:

JANUARY 20, 2016
The benefits of hybrid technology run deeper than low-emission, fuel-efficient road cars. Since the launch of the TS030 Hybrid endurance racer and GT300 specification Prius in 2012, plus the updated TS040 Hybrid in 2014, Toyota has proved the effectiveness of Hybrid Synergy Drive in top-level motorsport.

Built in cooperation with APR Racing to compete in Japan’s exciting Super GT series, the dramatic new model will make its race debut at the season opener on 9-10 April at Okayama International Circuit.

APR Racing team director Hiroto Kineso introduced the car with pride, aware that this new Japan-made product would be competing head-to-head with established supercars from predominantly European brands. He also took care to point out the direct link with TRD’s new anniversary edition Prius (below), built in commemoration of 40 years since the establishment of Toyota Racing Development.

Apparently, the aerodynamic enhancements fitted to the TRD road car were designed from the outset with Super GT regulations in mind and were honed using computational fluid dynamics technology. The lower front spoiler is therefore virtually identical to the race car’s, while other elements bear aesthetic similarities, albeit in exaggerated forms.

Equipped with a mid-mounted 3.4-litre ‘RV8K’ V8 race engine (above) and an output capped in line with GT300 regulations, the new Super GT Prius is arguably the fastest of its kind in the world. But by adopting the new Prius’s improved Hybrid Synergy Drive system – relocated to the passenger footwell for better weight distribution – this racing Prius clearly hasn’t forgotten its roots as Toyota’s environmental icon.

APR Racing will field two Prius models in the 2016 Super GT season. The #30 car will be piloted by Hiroaki Nagai and Kota Sasaki, while driving duties in the #31 car will be shared by Koki Saga and Yuichi Nakayama.

Commenting on his time racing the outgoing GT300 Prius, Koki Saga said: “The hybrid system reached a certain maturity with the previous model and now we have the new model, which has [become the] strongest machine APR have ever had. We won twice last year… so our goal this year is to win three times and get the championship.”