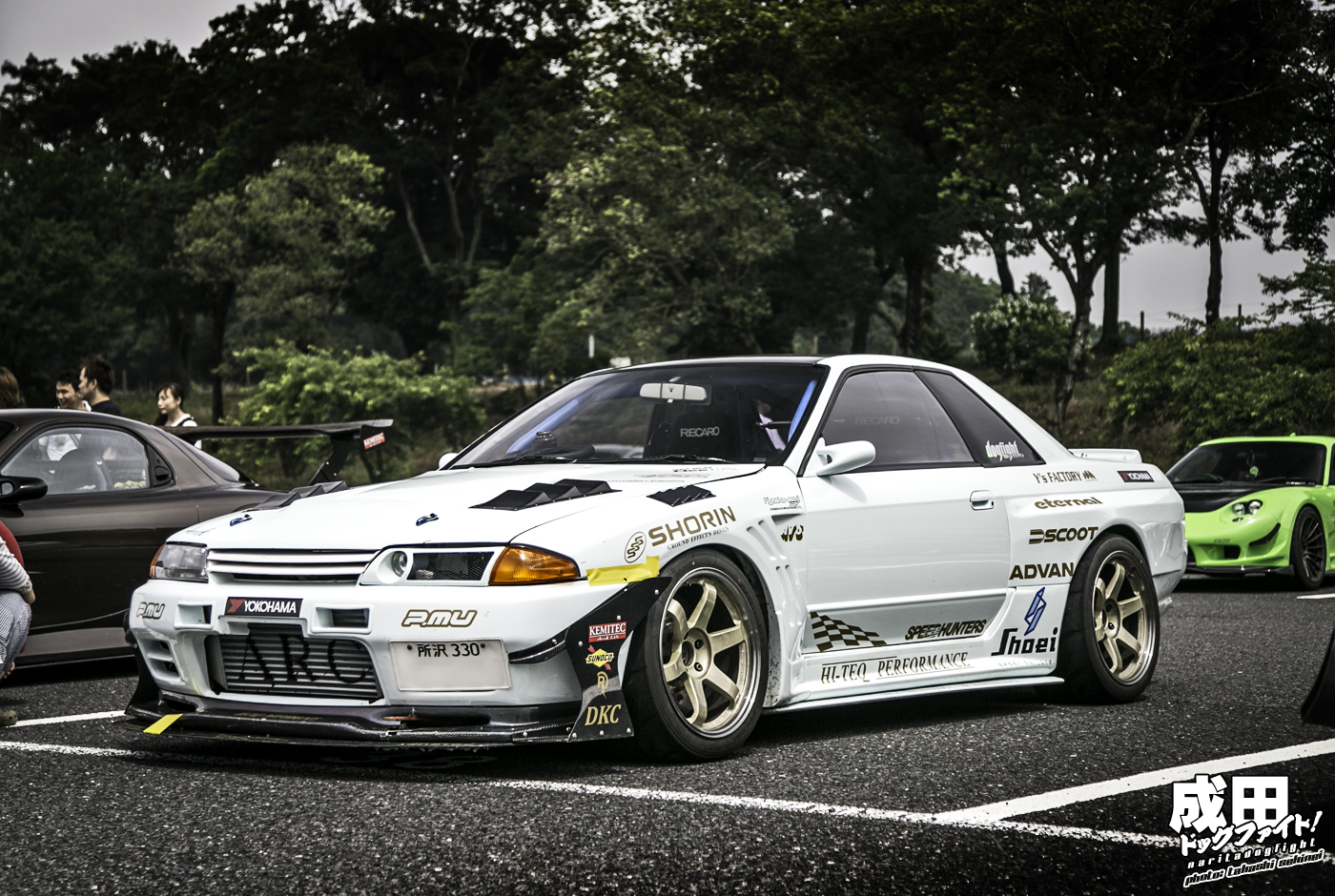 The calm backdrop of Doitsu Mura provided a stark contrast from that of their common locales.  Tsukuba, Central, Sodegaura, and other circuits regularly play host to their gathering, however not this time.  Instead of meeting as adversaries on track, today, we see the contenders from a more leisurely point of view.  After awaiting for most everyone’s arrival, it was time to start checking the cars out a bit closer. Another big name in this community is Mr. Daisuke Aoki-san, more often refereed to as the owner of the Doraemon FD.  He is very active in organizing the Attack events, and has played a key role in expanding this group to it’s size today.  Attack events have changed over the past year or two, now becoming more like full sponsored events with vendors, announcers and various media.  A very different feel to events like Battle Evome.

Parked next to the man of the hour here, let’s look a little closer at his FD. Built at his now prominent shop Ready Go Next, for the longest time now it has been one of the most unique builds in the group.  If you remember our 2013 Battle Evome coverage, you’ll know that even his helmet is Doraemon themed. The new Enkei RS05RR’s providing an equally aggressive look to the rest of the car and filling up the widebody quite easily. What Doraemon themed car would be complete without a matching sun visor?  Kaji also made sure there were plenty of the CSG featured Option2 magazines around for friends. Quite possibly the best wing stands ever.  Kumamon is #1. Nakajima-san rolling in to the meet after the driving from Saitama.  Strong competitor in Attack, but one I don’t personally see too often so it was nice to get a closer look at his car. Really cool car, and it’s not just driven on track either. Nakajima drives it for pleasure to meets or PA’s on weekends as well. Very clean S15 parked next to Sekinei.  I think this is Seiji-san’s, but I’m not sure. All in all it seemed like quite a bit of variety for such a small first meet. Shoichiro Masumoto-san of course was in attendance with his iconic R32 GTR. This car has come quite a long way appearance wise since last year, or even the beginning of this year actually.  I’ve always been a fan of the color, which under the days overcast skies looks more grey than light blue. Awesome FD parked next to Naomi – I really like those taillights. …and the dogfight decal haha Naomi Kotaka-san’s GT3RS.  Always been a fan of this color scheme over the others; it’s a little more matured. He’s got the same optional stands that are on Mr. Super Now’s orange GT3; an improvement I think over the lower mounted choice. Since this was a BBQ as well, Hara-san brought an array of puddings for dessert.  His splitter made a nice shelf to store them. I’ll wrap up the rest of the photos tomorrow after I get a chance to process them.  I’m sure you’ve noticed by now but these photos are a bit larger than what I usually offer.  They came out really good, and the cars are so cool that I thought it was appropriate to edit them in a larger size.

See you tomorrow with more!