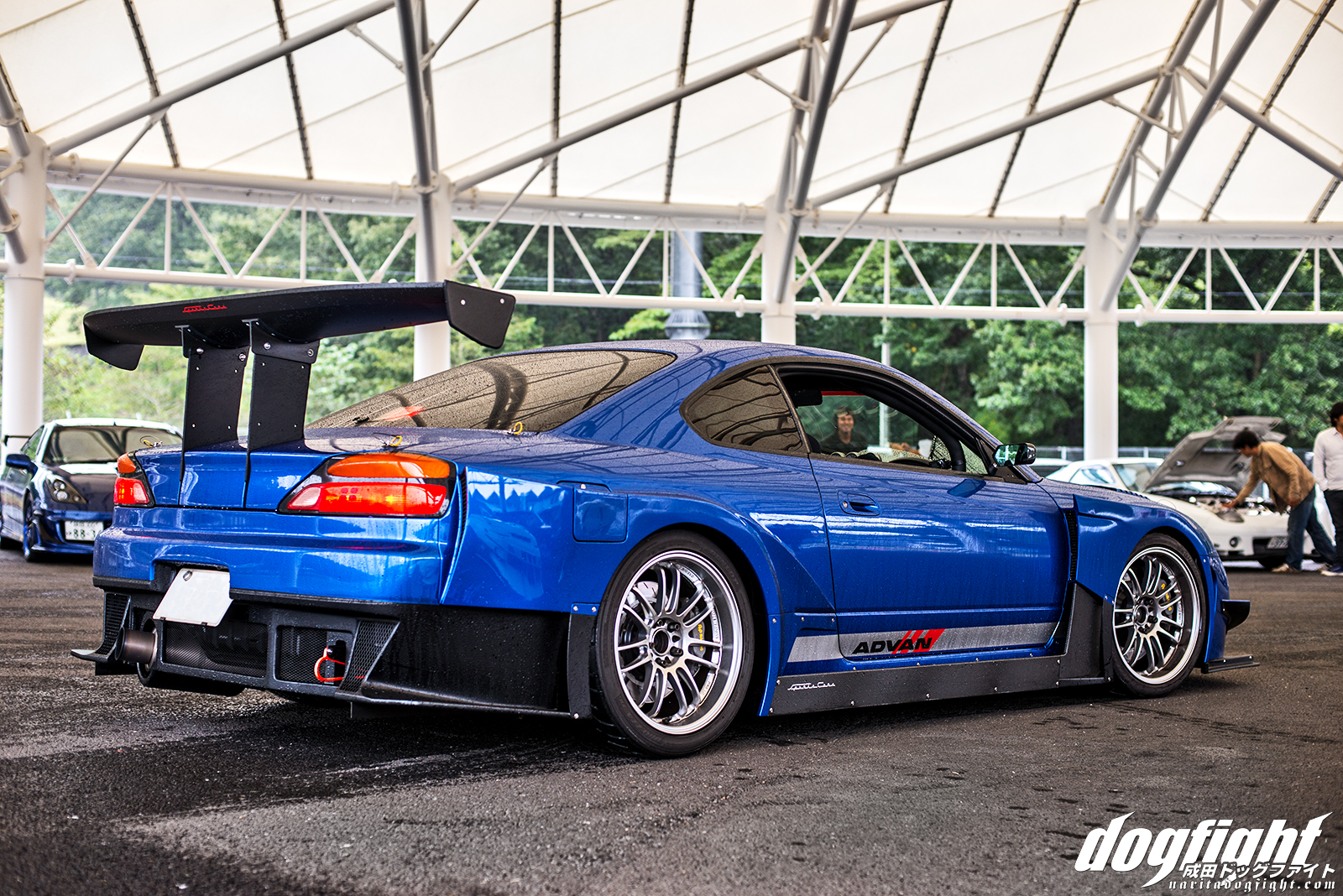 It’s interesting to see how an individuals ambitions, and desires transform over time.  As we experience more and more of life, and slowly grow to accept who we are, it’s not uncommon for our thought process to undergo a change that not necessarily limits our goals, but makes them more specific.  It’s something I’ve been experiencing myself for the past year or so, and there’s a subtle satisfaction from it.  I’ve seen a lot of those new attributes show themselves on this very site; for me it’s predominantly been an increase in the value of time.  I suppose it’s common knowledge that the more time you spend getting to know someone, the more notable that time is.  I’m pulled in a lot of directions when I’m in Japan, and believe it or not, it’s taken awhile for that simple concept to soak in.

It’s a bit like multi-tasking in that affect; we’re much more dynamic if we concentrate on less things at once.  I had all this in mind when I was talking to my friend Masao-san about having a meeting with a group of friends in Japan; F.R.S.

I recently shared an image on our Instagram page (@naritadogfight) with a caption explaining a little bit about how I felt about the whole concept of holding an event.  I get asked this question a lot, ‘When’s the next Winter Cafe going to be?’  Well, the answer is probably never…at least not for awhile anyway.  After the last one, the more I thought about it, the idea of holding a meet of that size again became less and less appealing to me.  It’s not the work, don’t get me wrong, I enjoy that very much.  But because of that previously mentioned specificity in my thinking, I started to realize that the significance of the time spent for each person is increased tremendously when the amount of people attending decreases. It’s almost like there is this degree of diminishing benefit from having an exponentially greater amount of people. I don’t want to be misunderstood here; NDF Winter Cafe was amazing for me, and I enjoyed every minute and everyone that came.  The diversity of people and cars was amazing.  The concept of an open, non-judgemental meeting still holds a great place in me, and I’m glad we could make it happen on such a large scale.  The only fault of such events lies in the frailty of time.

Kakuzo Okakura, the Yokohama born Japanese scholar who wrote ‘The Book of Tea’, (decent read) said something that embodies my thought in a little more abstract way:

“Those who cannot feel the littleness of great things in themselves are apt to overlook the greatness of little things in others.”

The way I see it, the longer you spend with someone, it’s much more likely that you’ll see the greatness in them.  A confidence in this new found awareness got me excited about trying to translate it to an automotive medium.  After talking with Masao, the idea of a pop-up meet came into play where we’d invite acquaintances that we’d like to know more about.  A way to showcase unique builds, and personalities on a much lesser scale.  So a date was set, and invitations were sent out. 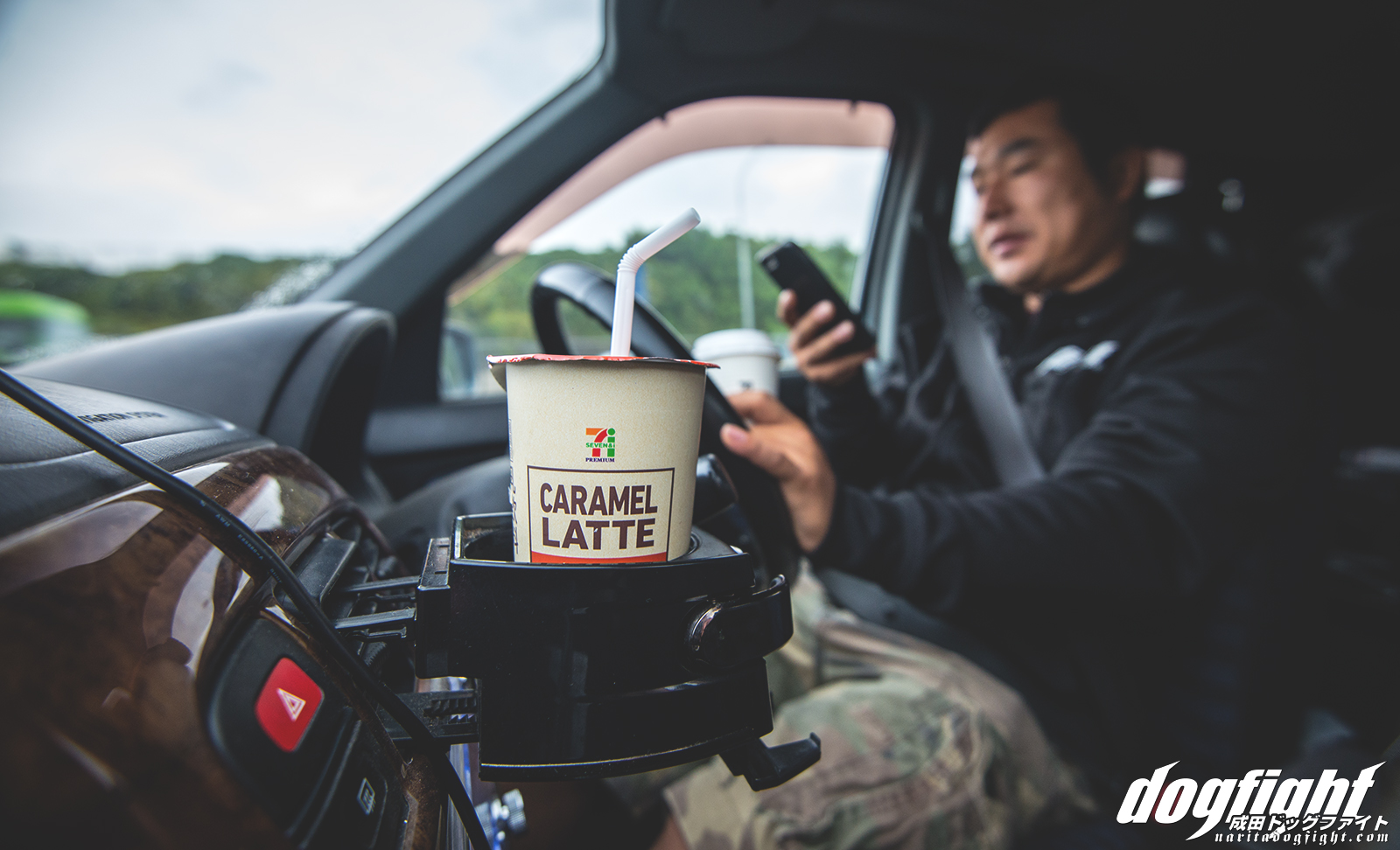 On the morning of October 8th we, grabbed some coffee at a 711, and headed out to Fuji Speedway; the site of the first of, what I hope, many of these to come. 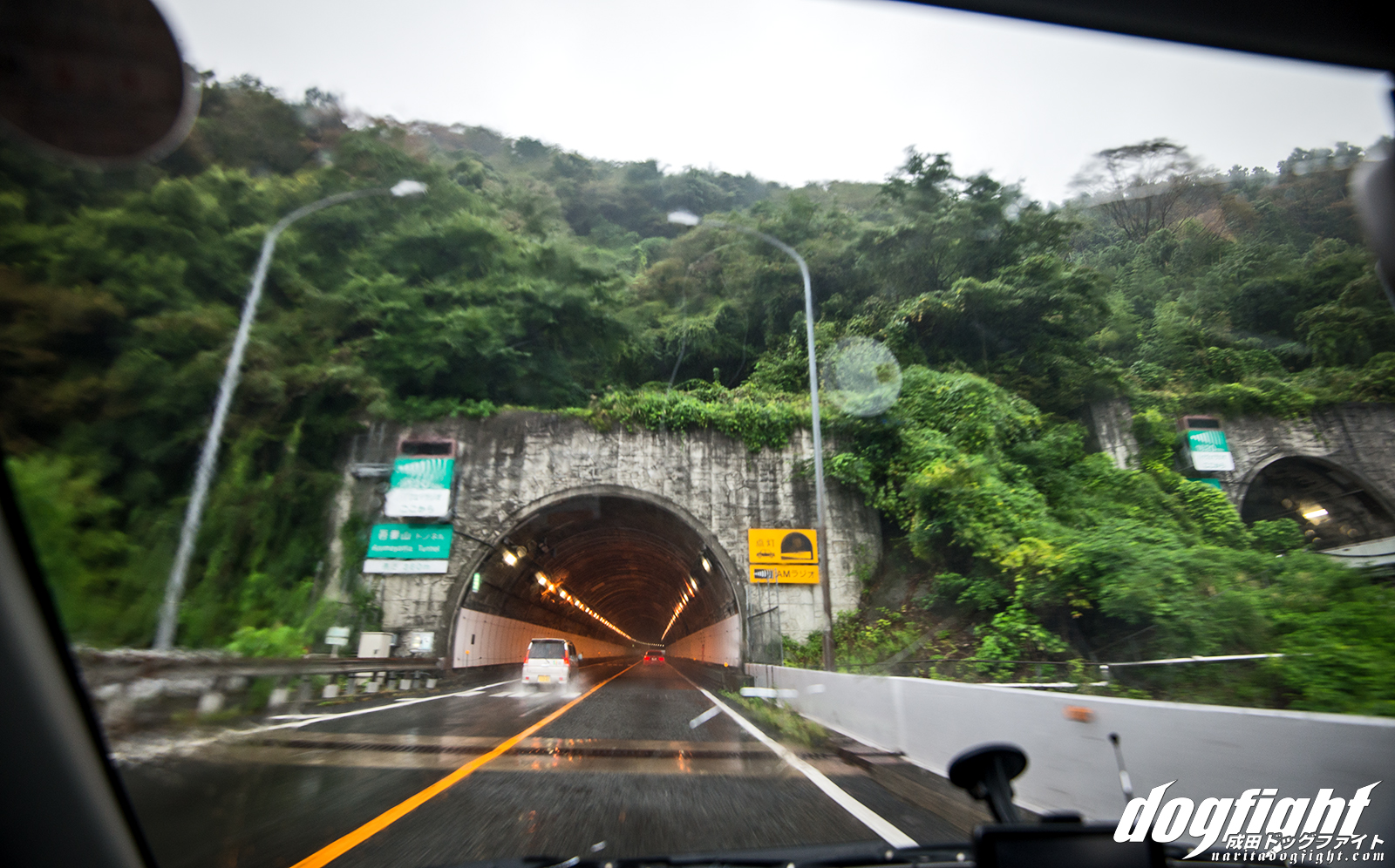 I love the drive from Kanagawa to Shizuoka.  How the metropolis quickly changes to rolling mountains of green, fresh from recent rains is pretty surreal.  Not to mention you’re traveling in the opposite direction of Tokyo.  It’s always a drag to drive through Tokyo to get to Tsukuba or other tracks that direction; the traffic is always a nightmare.  Anyway, it was raining pretty hard on our drive up, and we were a little worried about how that would affect the day. 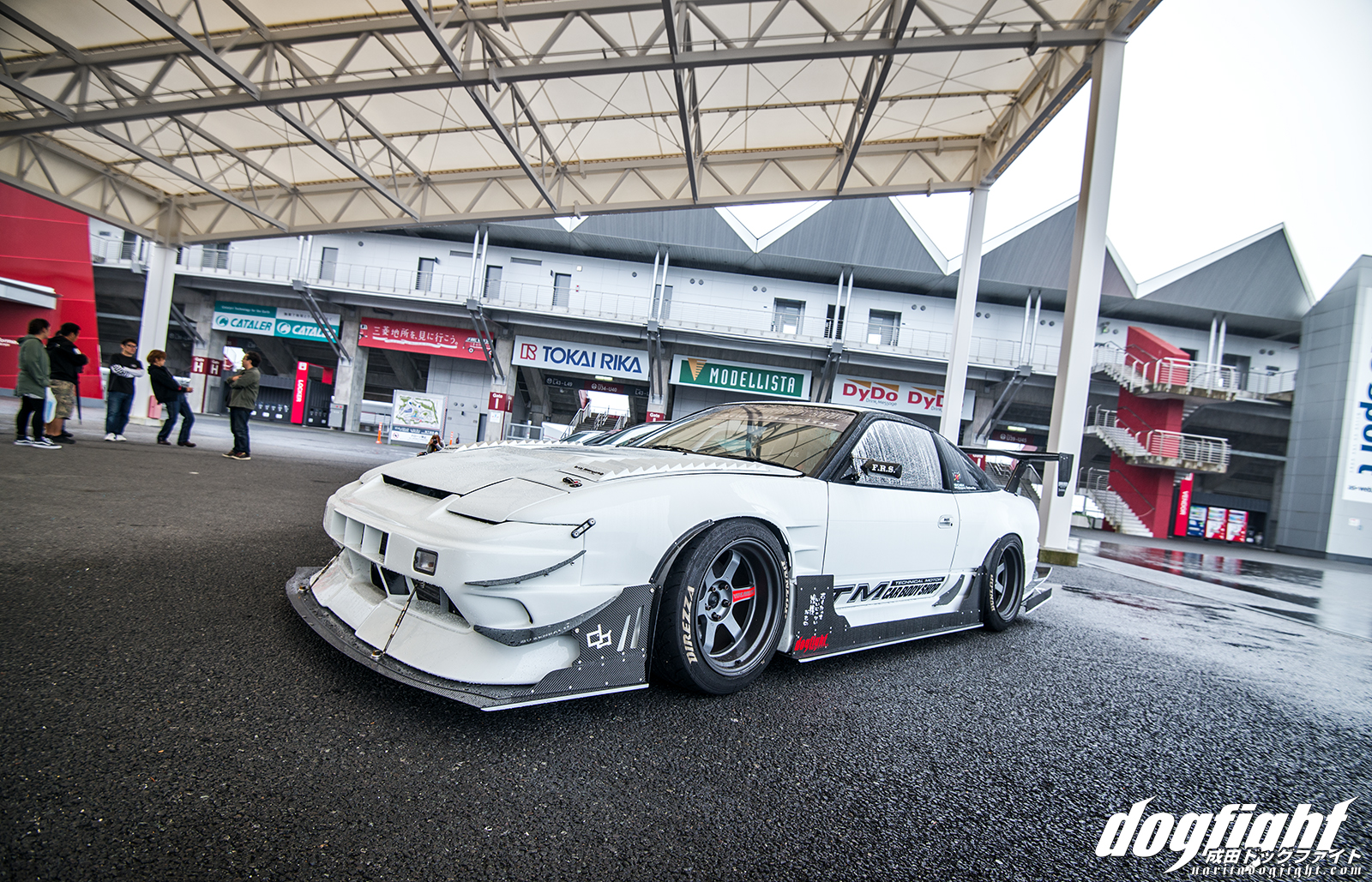 As we pulled in, rather early, the FRS guys were already there.  They had left much earlier as Seki and Ame were coming from Nagano, and Masao and Hitokazu were coming from Chiba; both had much longer drives than us.  I was glad to see everyone had made it safe, as driving in a torrential downpour when your car is a few inches from the ground is always nerve racking. 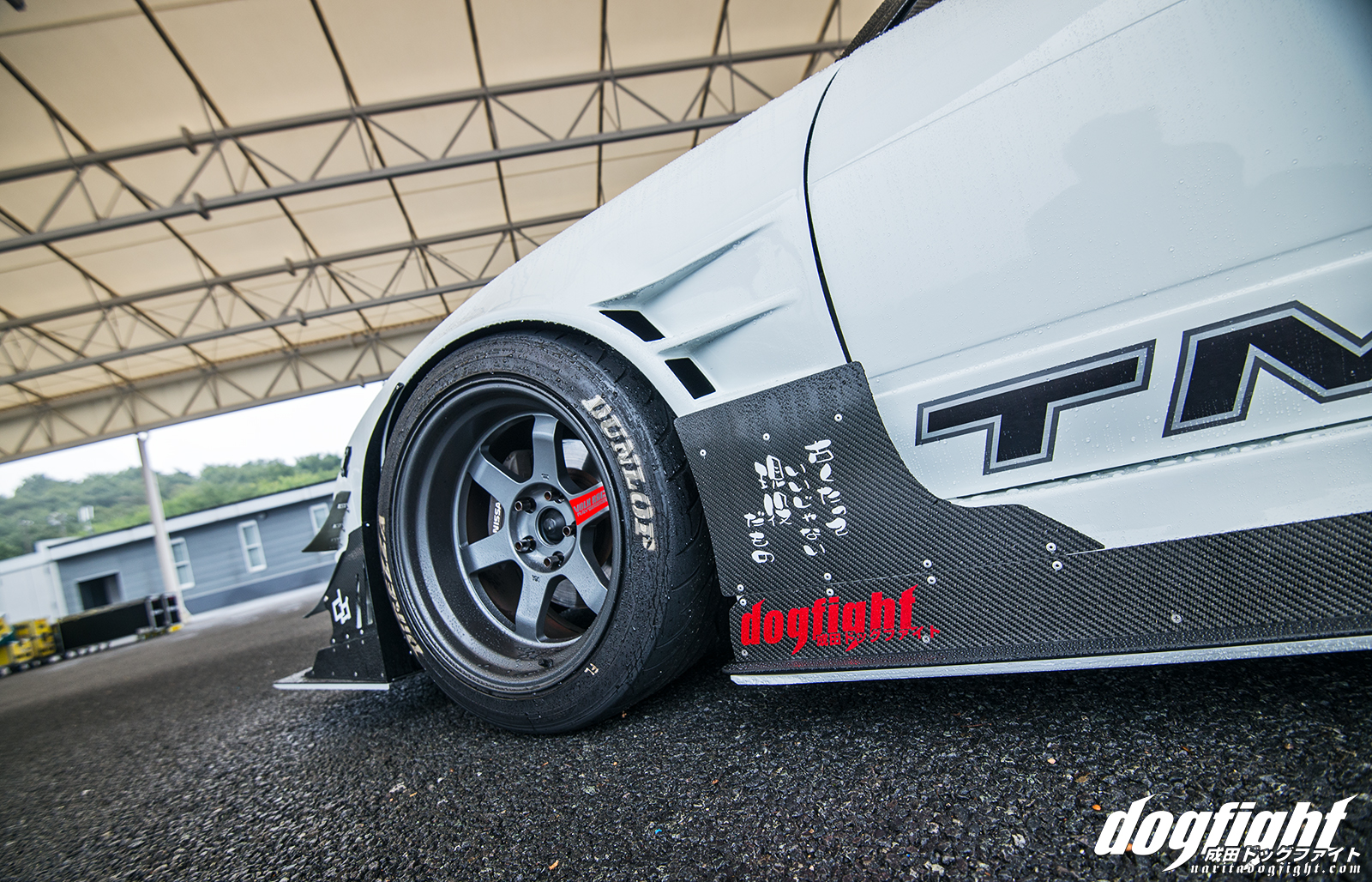 We said our hellos and chatted for a bit while we waited for a few more people to come and set up.  You’ve seen Masao’s car on here before, but the TE37-V wheels are a new addition. 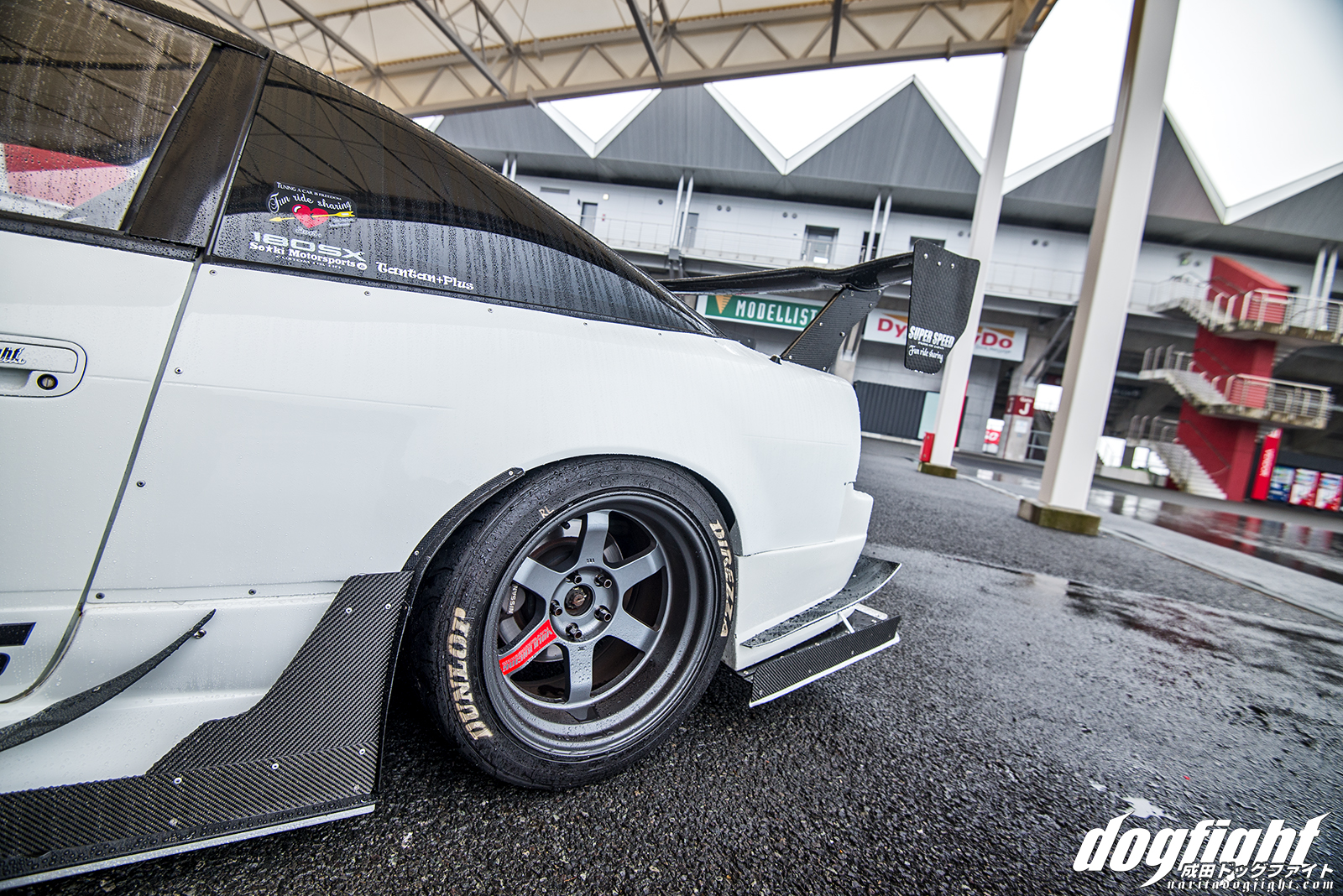 It’s hard to tell, but the lip is a slightly different shade of grey than the Volk gunmetal of the spokes. 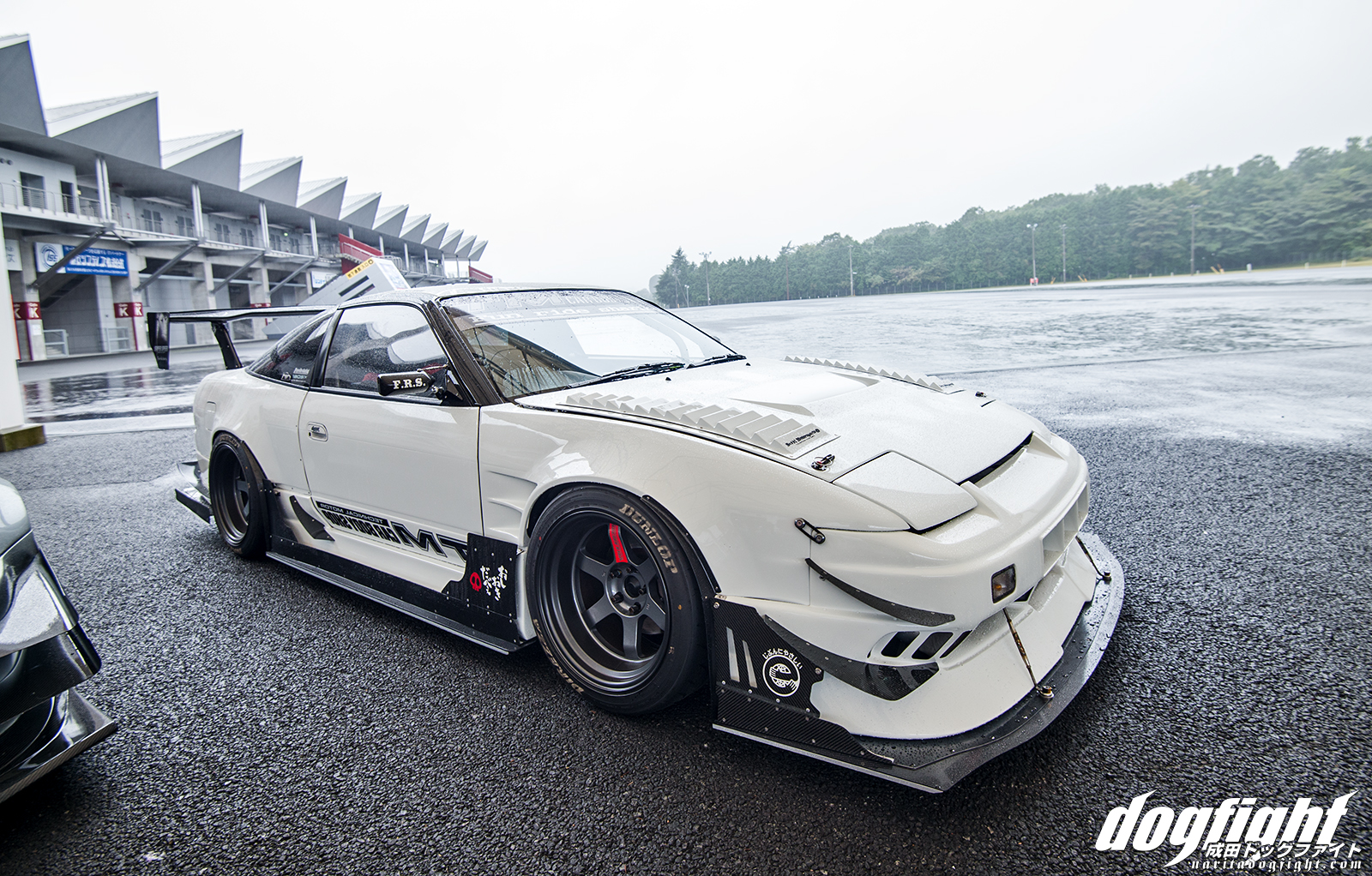 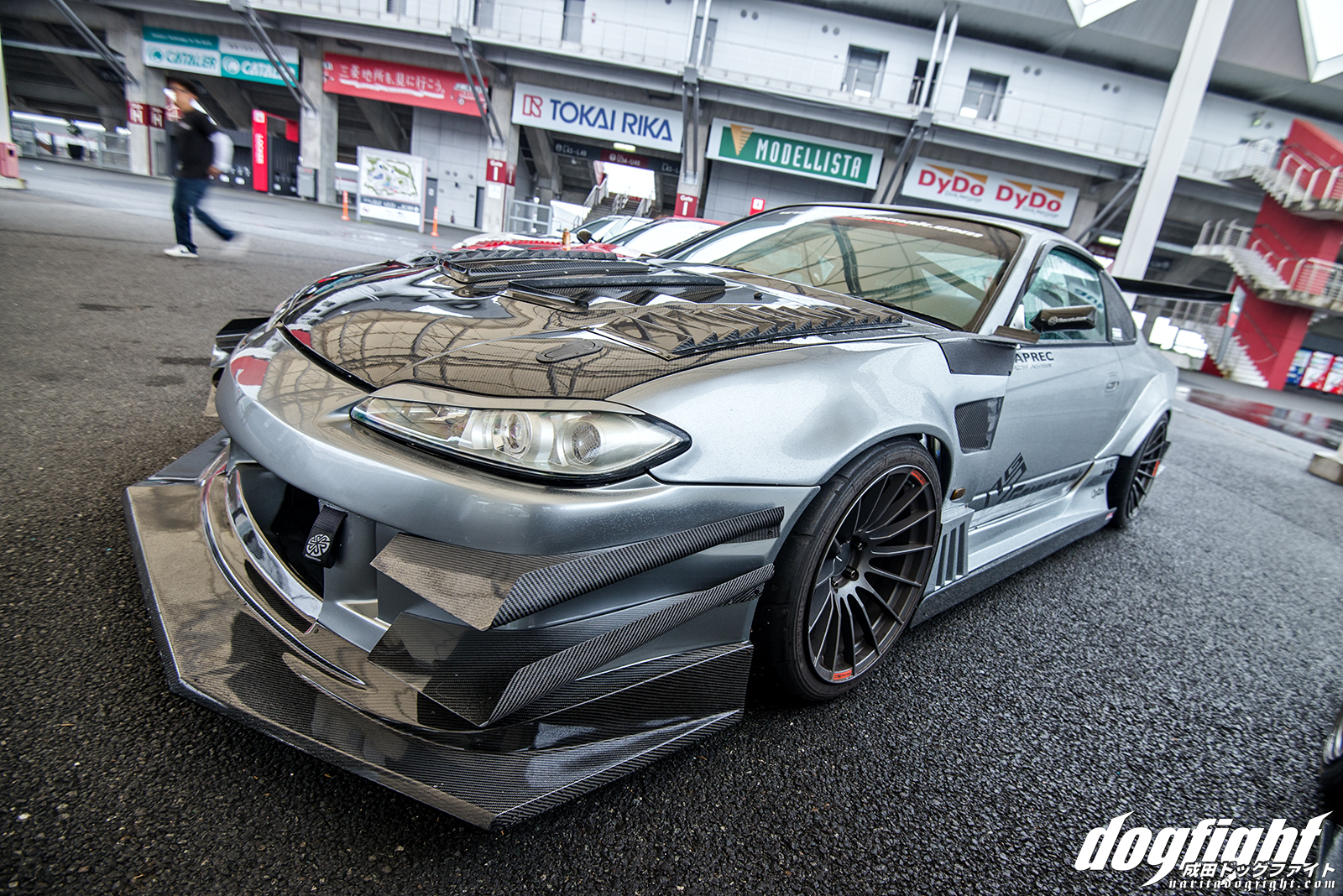 Amemiya-san had his flagship S15 sporting the newest line of Garage Mak aero.  The Type 6 aero features the unique carbon fender spoiler add-on.  He’s made a few changes here and there as well, like a revised canard setup. 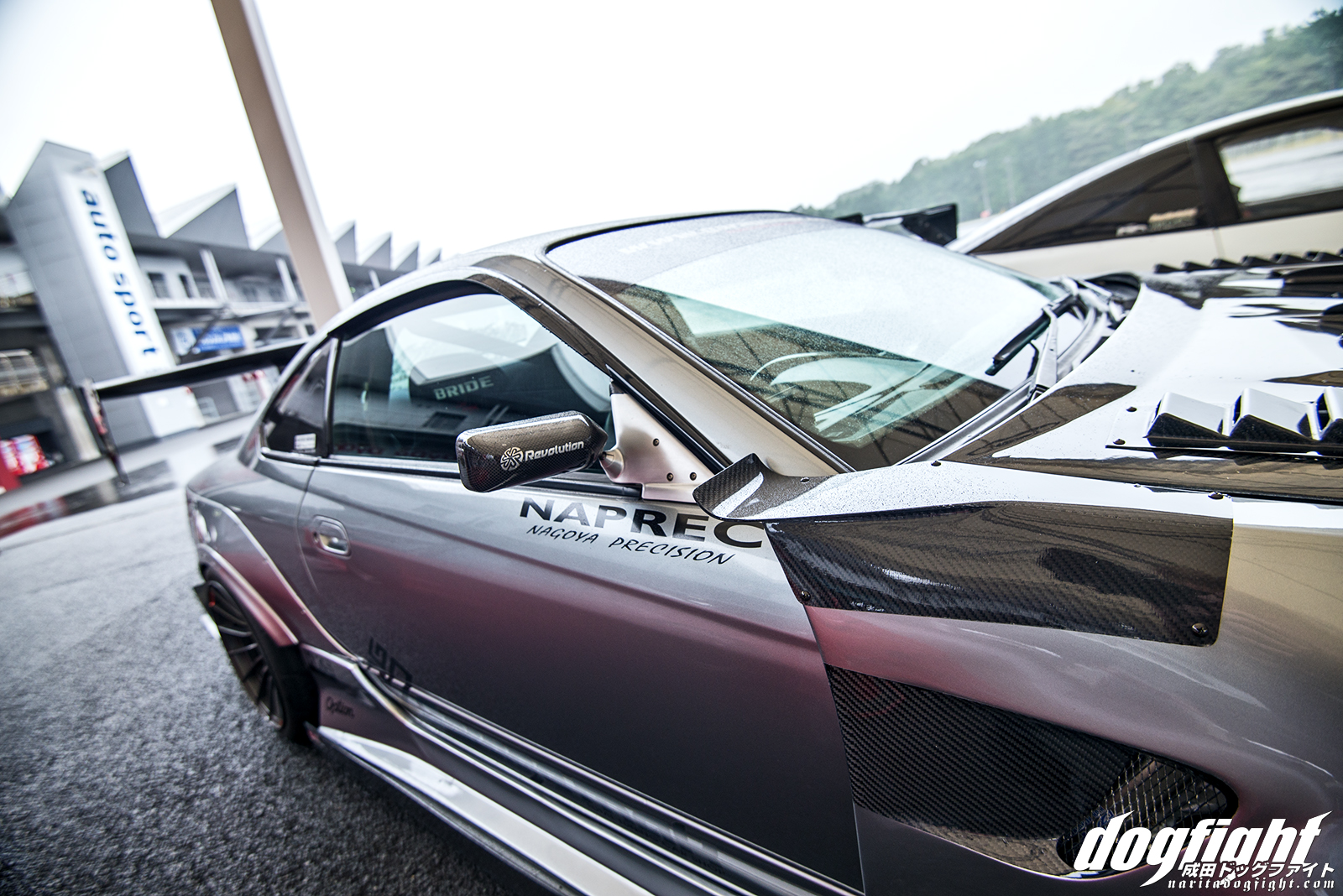 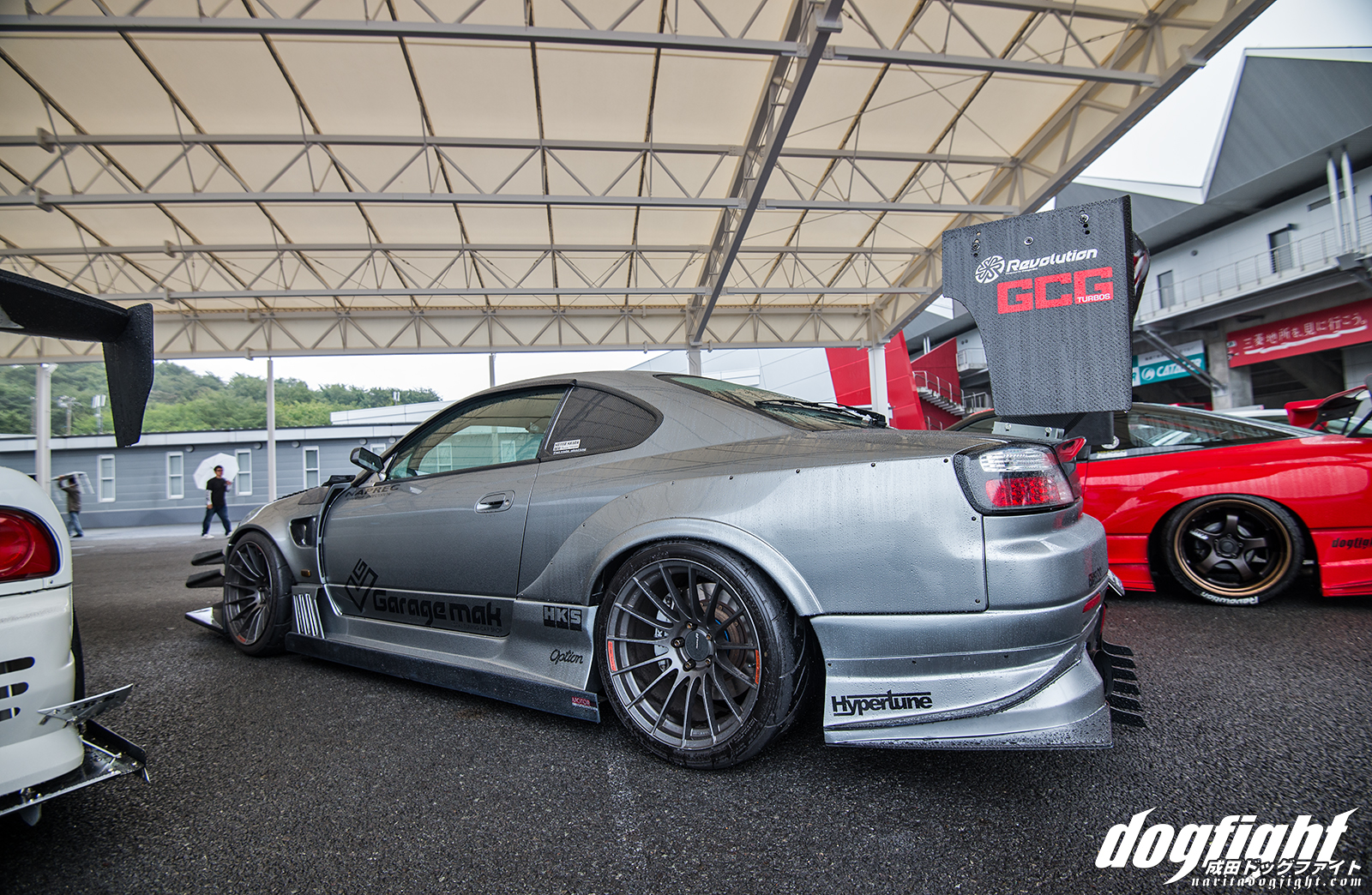 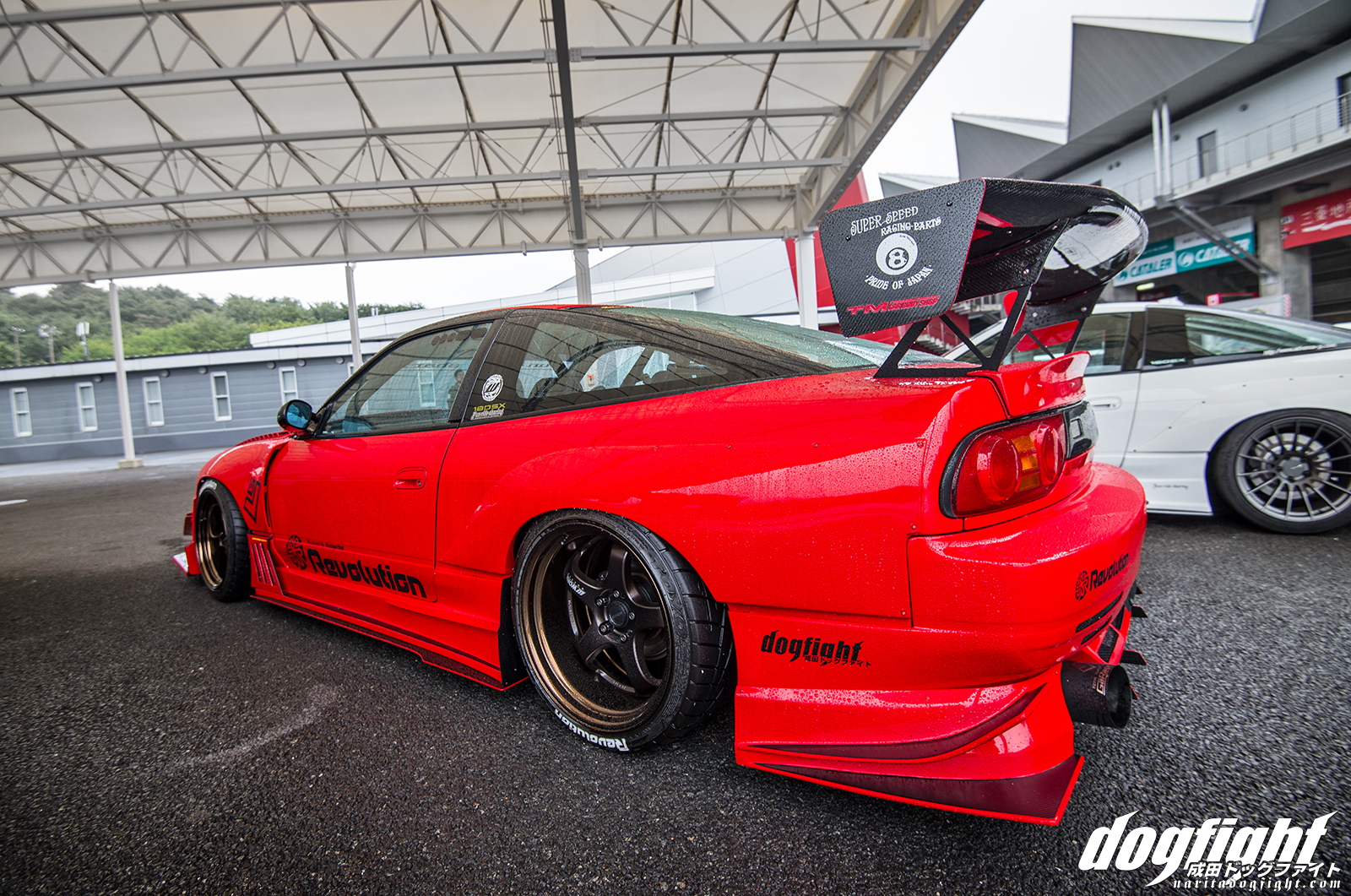 Mr. Seki brought out his Work modeled 180 from Nagano as well.  Not too much has changed since the last time I talked to him, save for a few modifications to the front end. 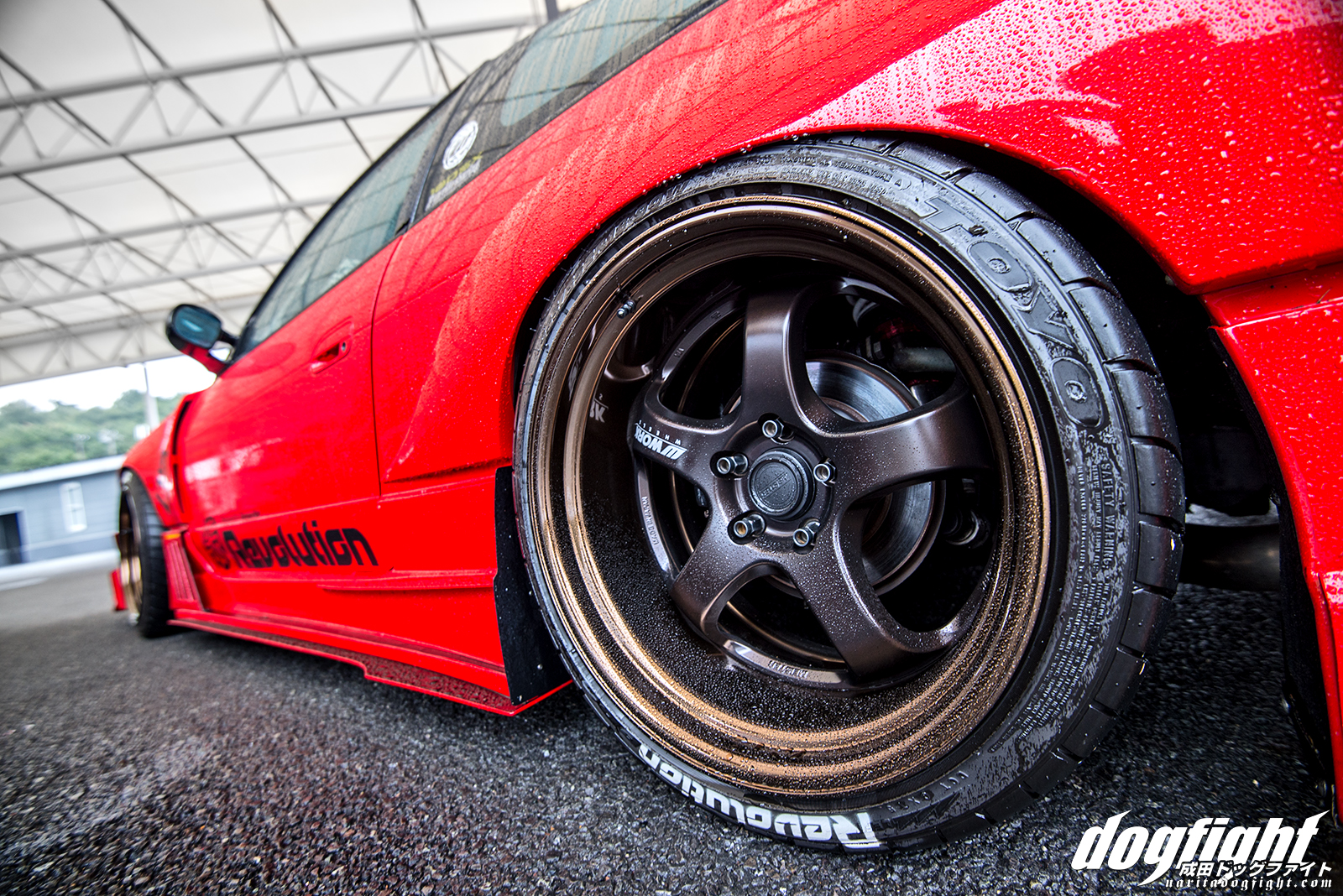 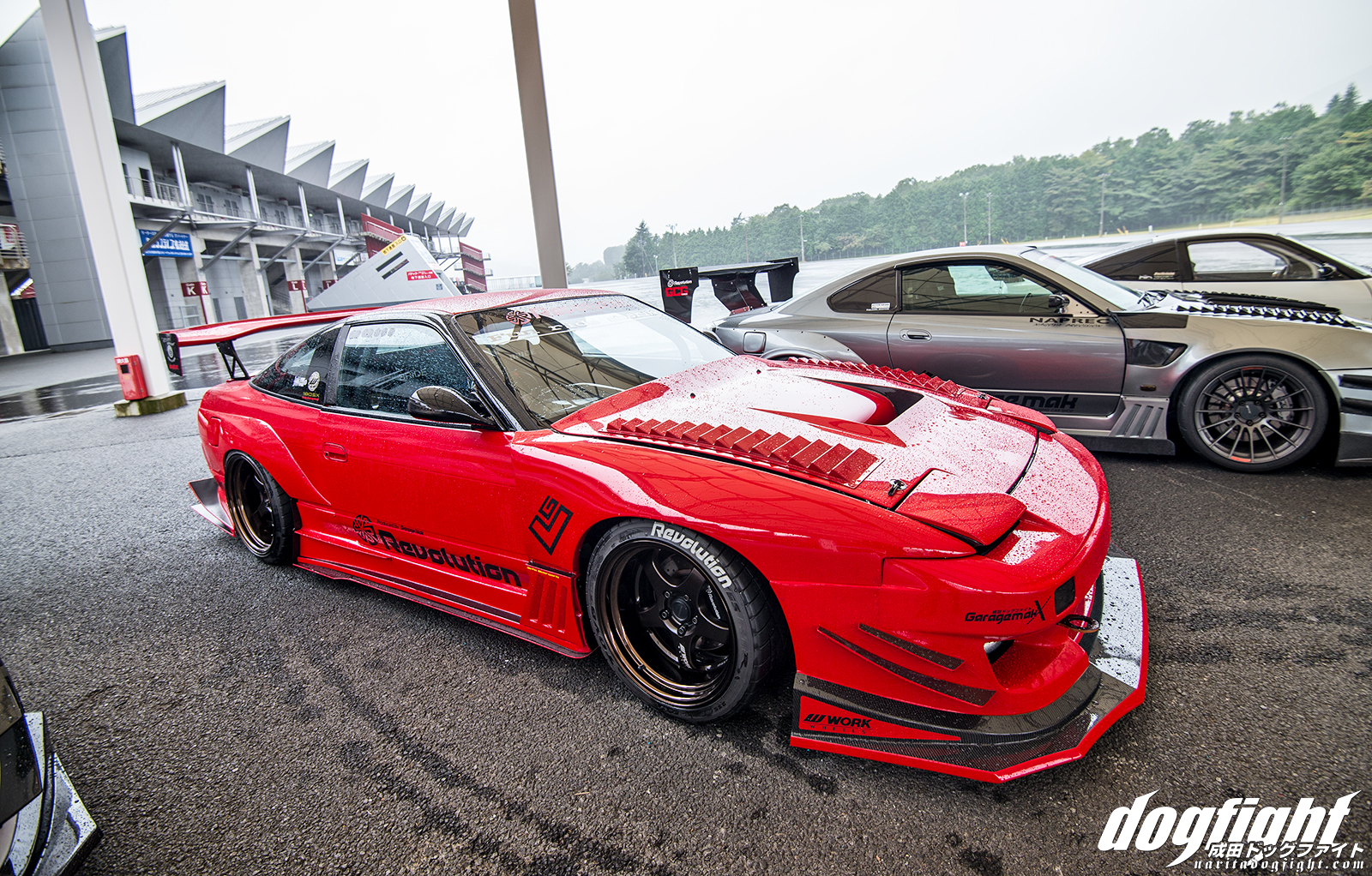 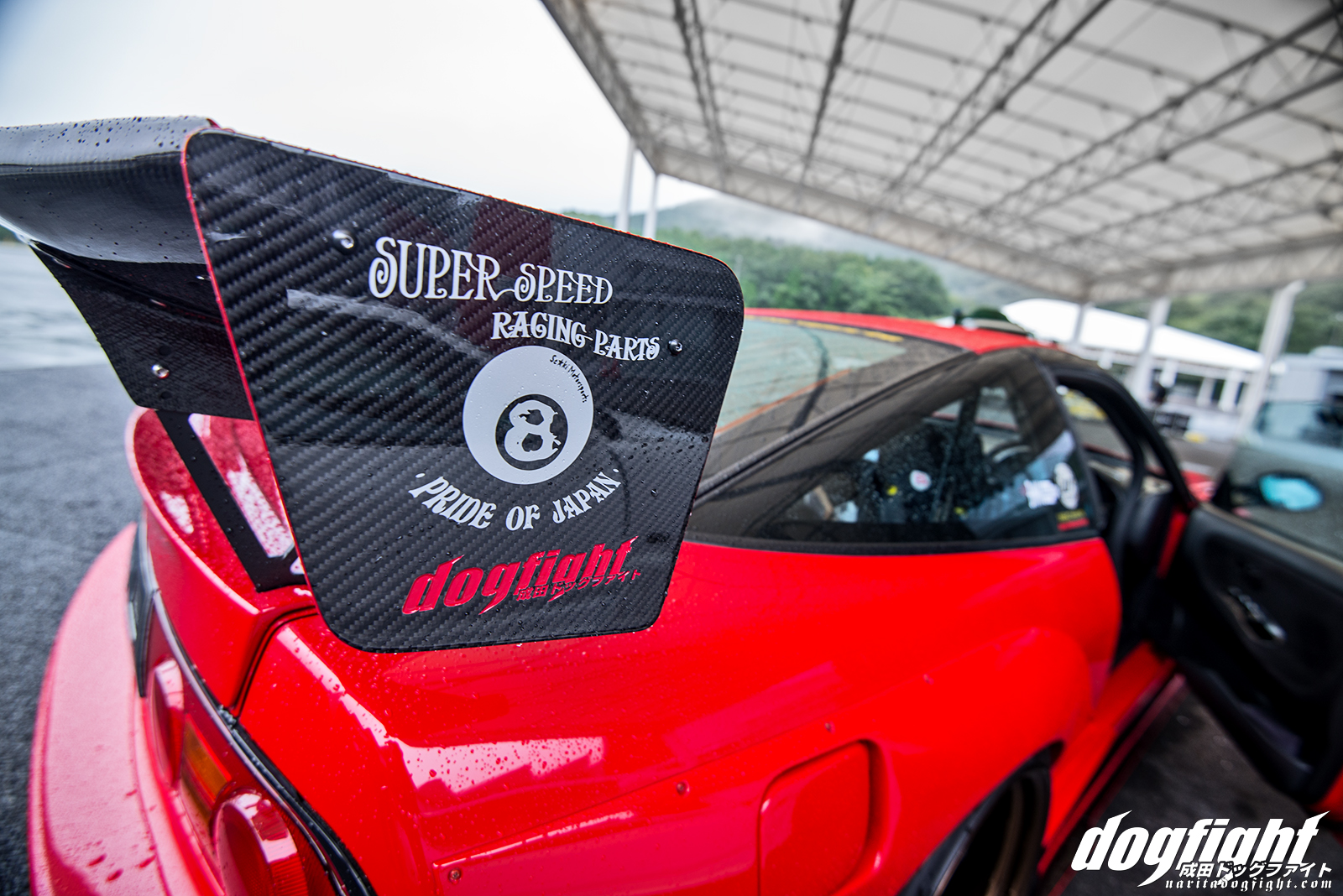 The new end TM end plates came out cool!  They’re made from an embossed carbon. 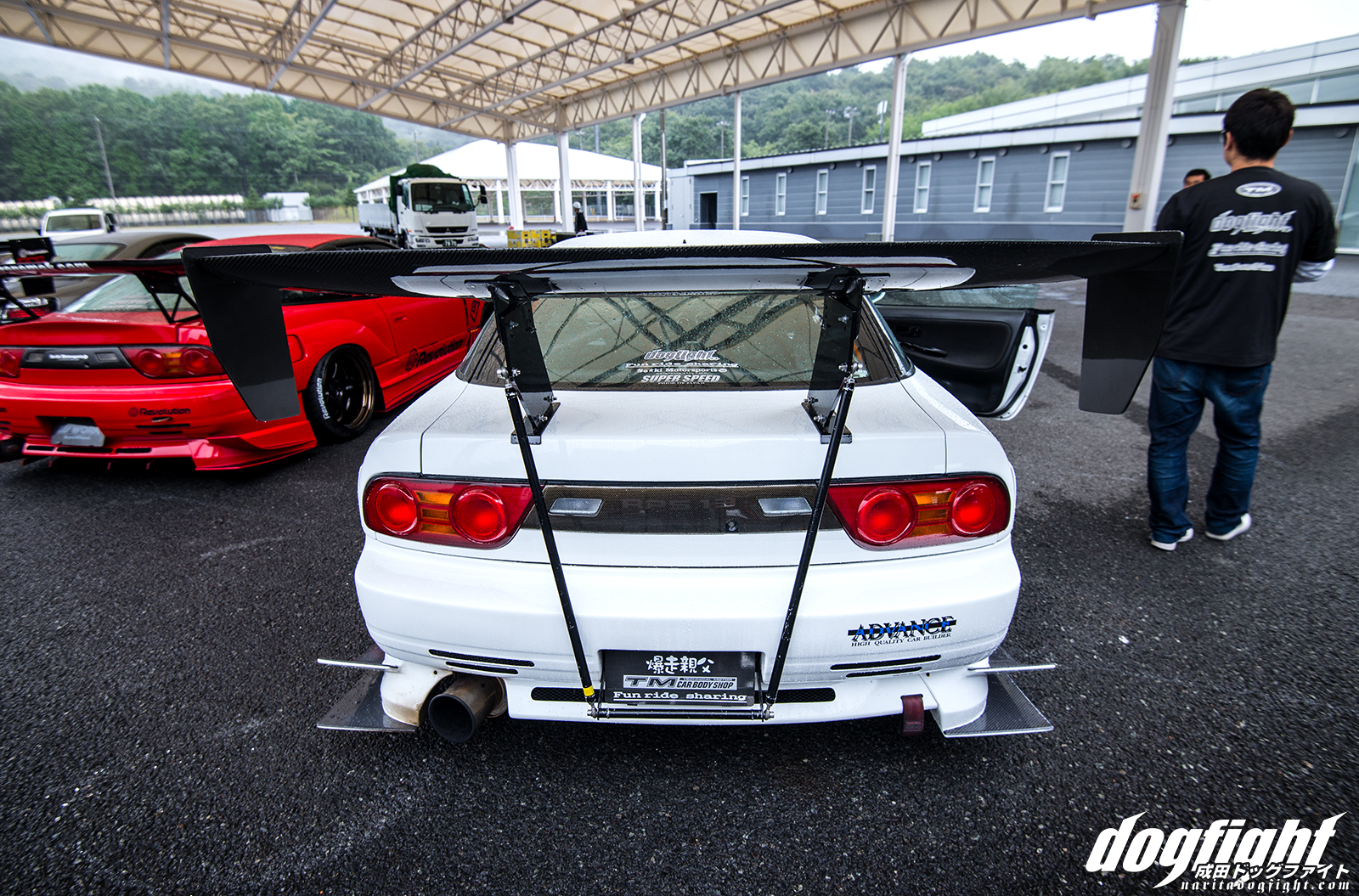 This was the first time meeting Kazu and seeing his 180 in person.  Another really cool build I’d been wanting to take a closer look at.  After we caught up a bit, we headed over to the other side of the lot to set up. 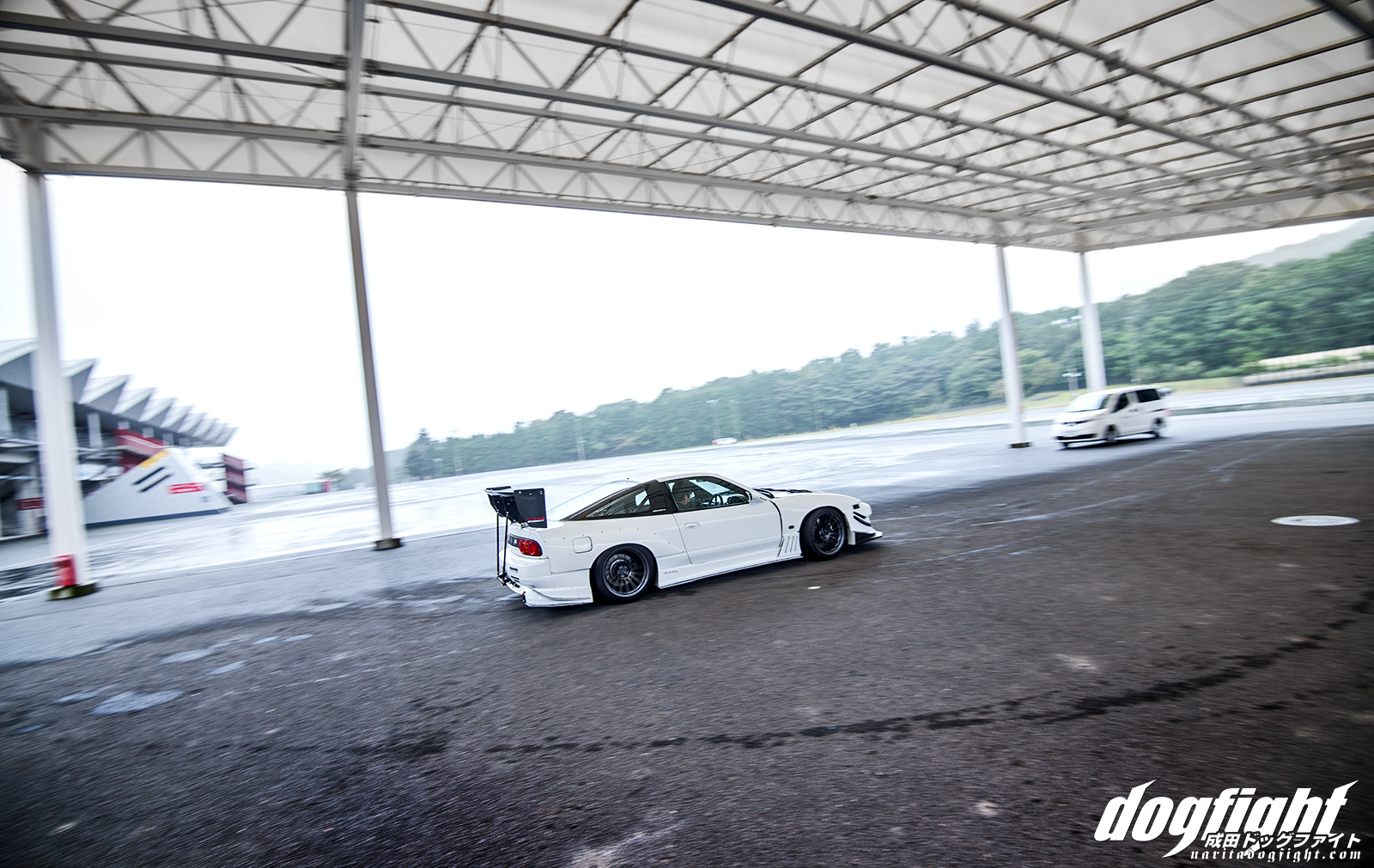 I like the end plates on this 180 a lot; they have a really cool, slight curve at the back end. 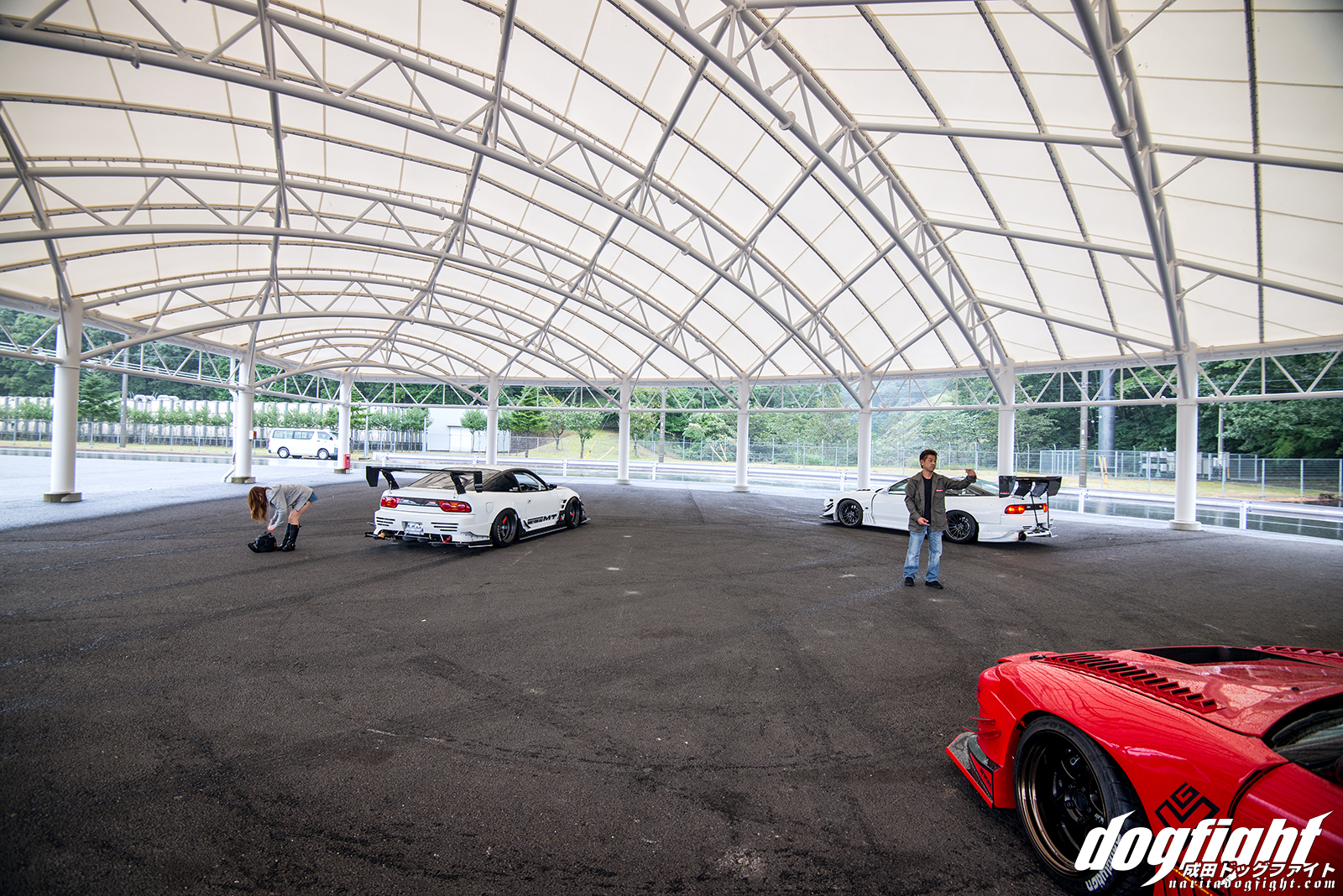 It was getting close to 10am around this time and the first few cars started to trickle in.  We had seen a few at a PA along the expressway when we stopped to get gas earlier on our drive up; I was glad the rain didn’t discourage anyone. 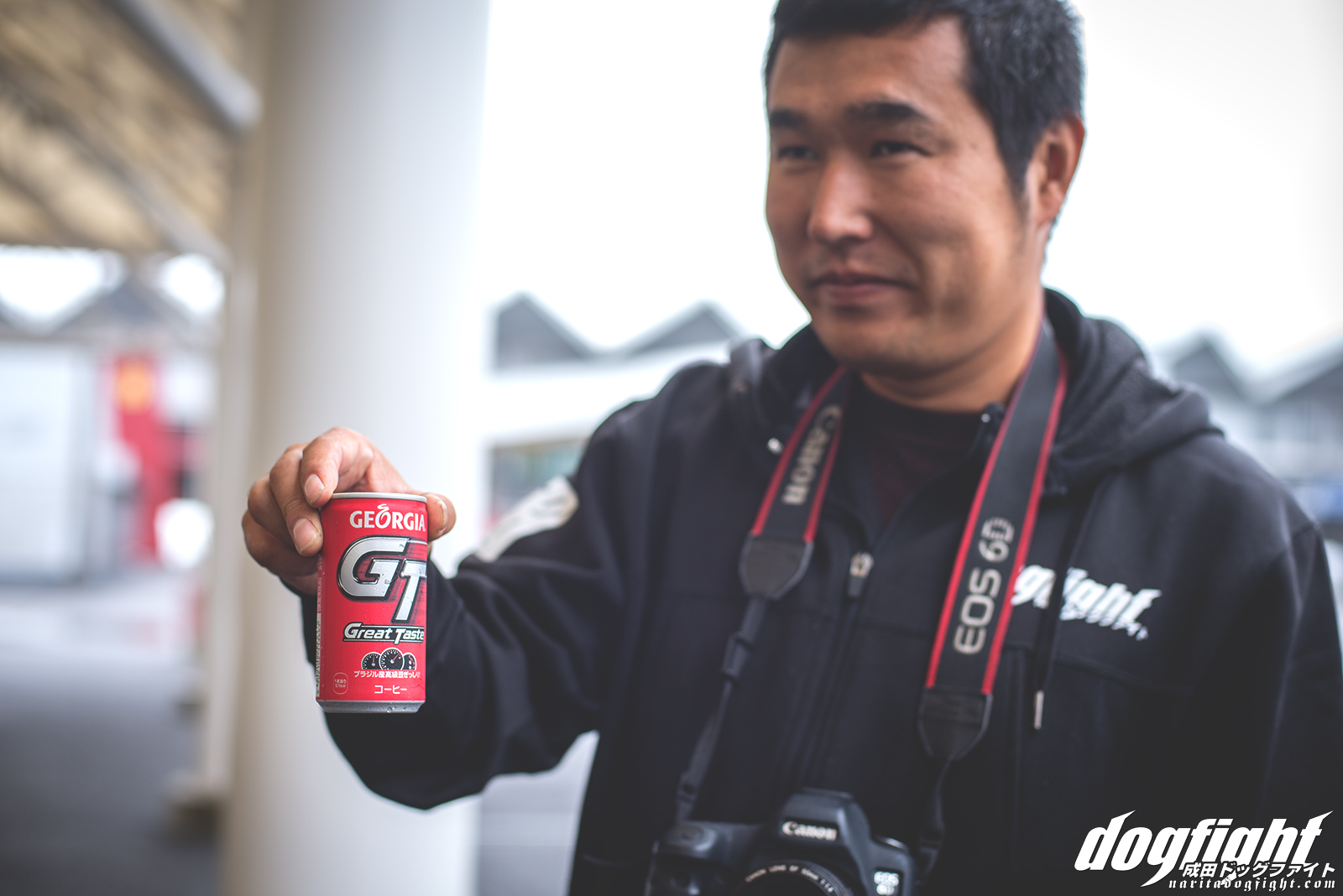 Georgia makes a Fuji-inspired canned coffee called GT – but meaning ‘Great Taste’ as opposed to what we think of when we hear GT.  It’s hard for me to tell the difference between canned coffees, so I usually just have a Real Gold, unless coffee that is not canned is available. 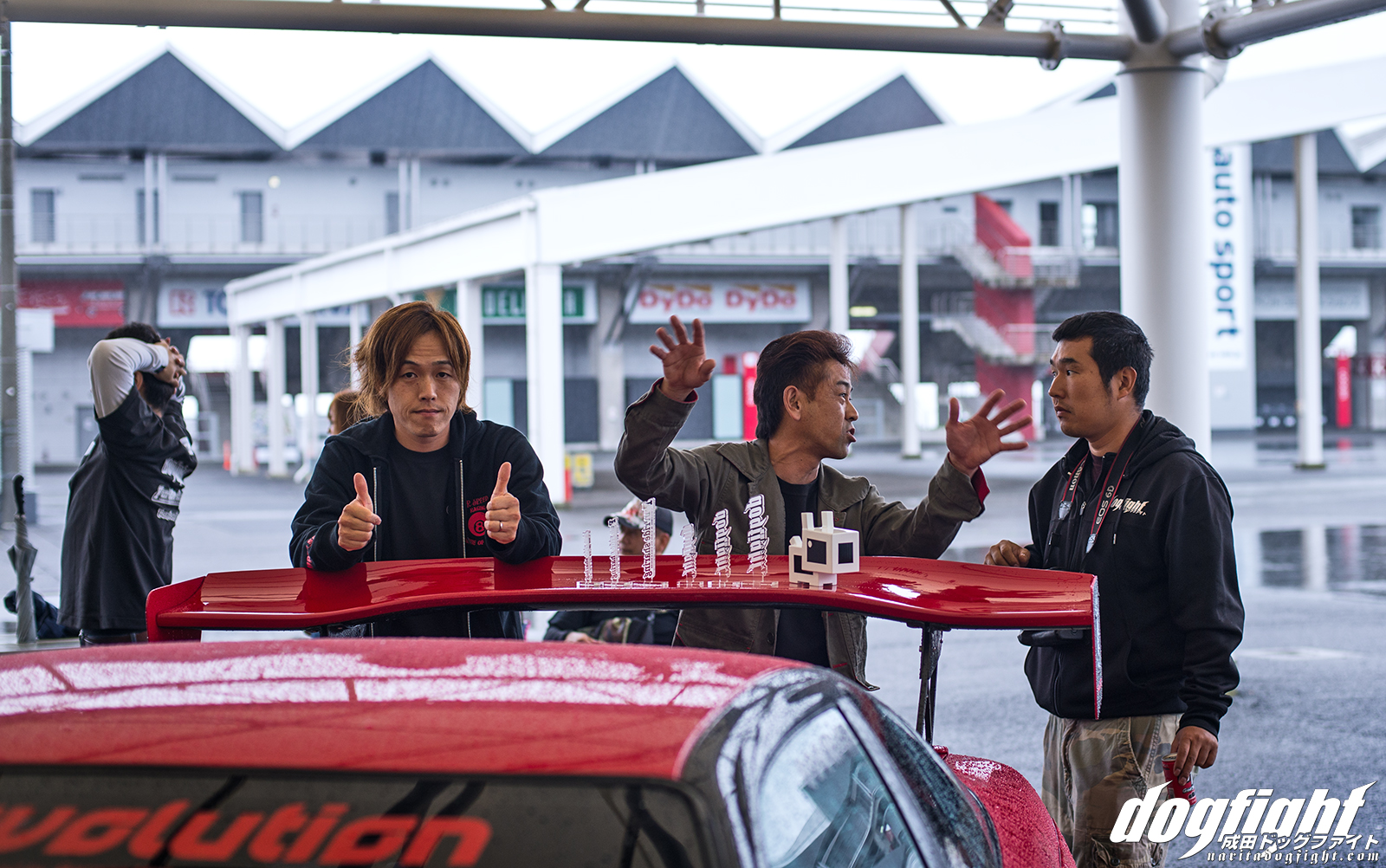 Despite the gathering being geared down by a huge margin, we thought it would be cool to make some awards to give out.  A 1st through 3rd trophy was made for both the FRS group and NDF.  We’d each judge the cars on our own scale, based off pre-decided factors, and have a little ceremony at the end.  It turned out being rather fun! 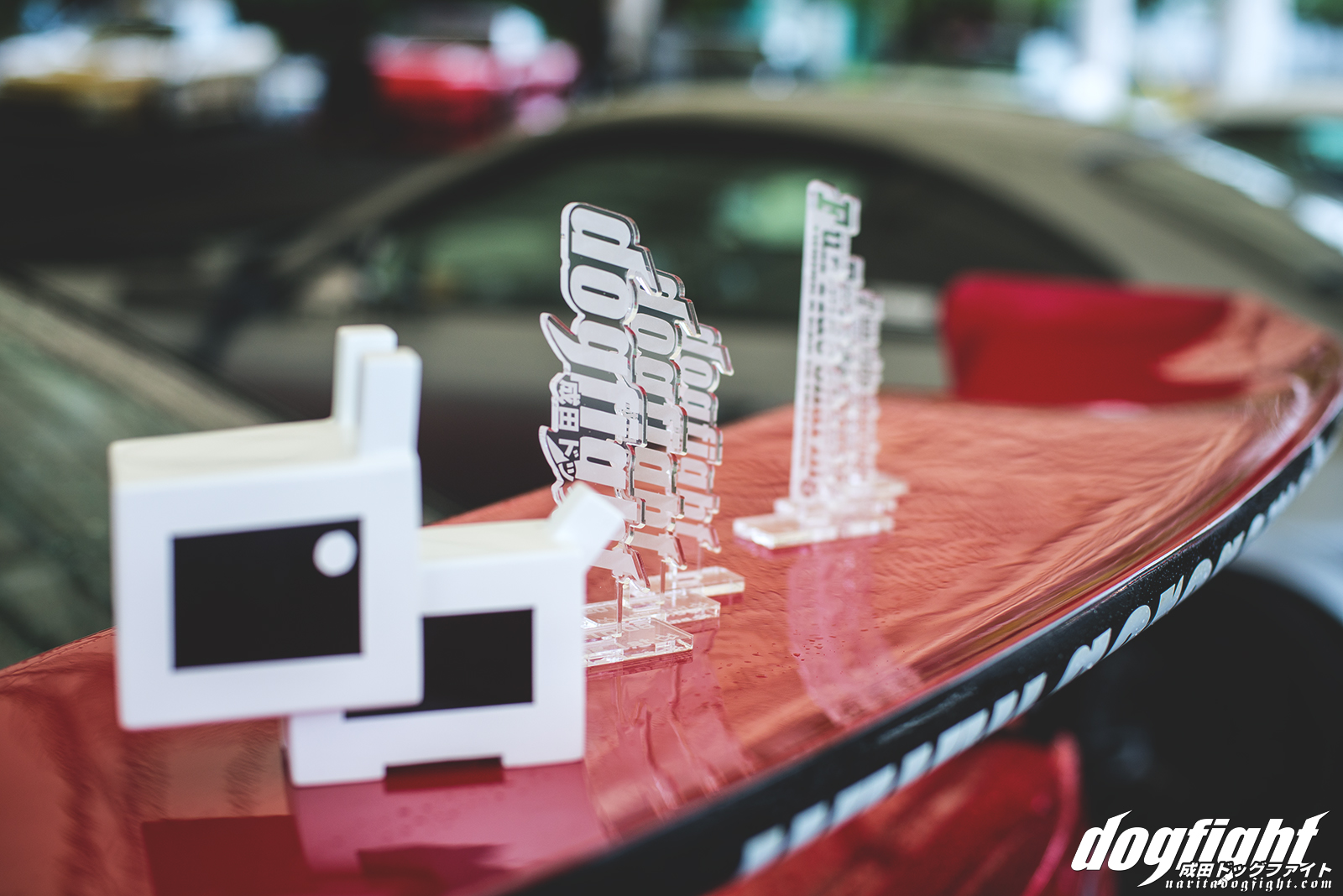 Masao made the trophies at TM. 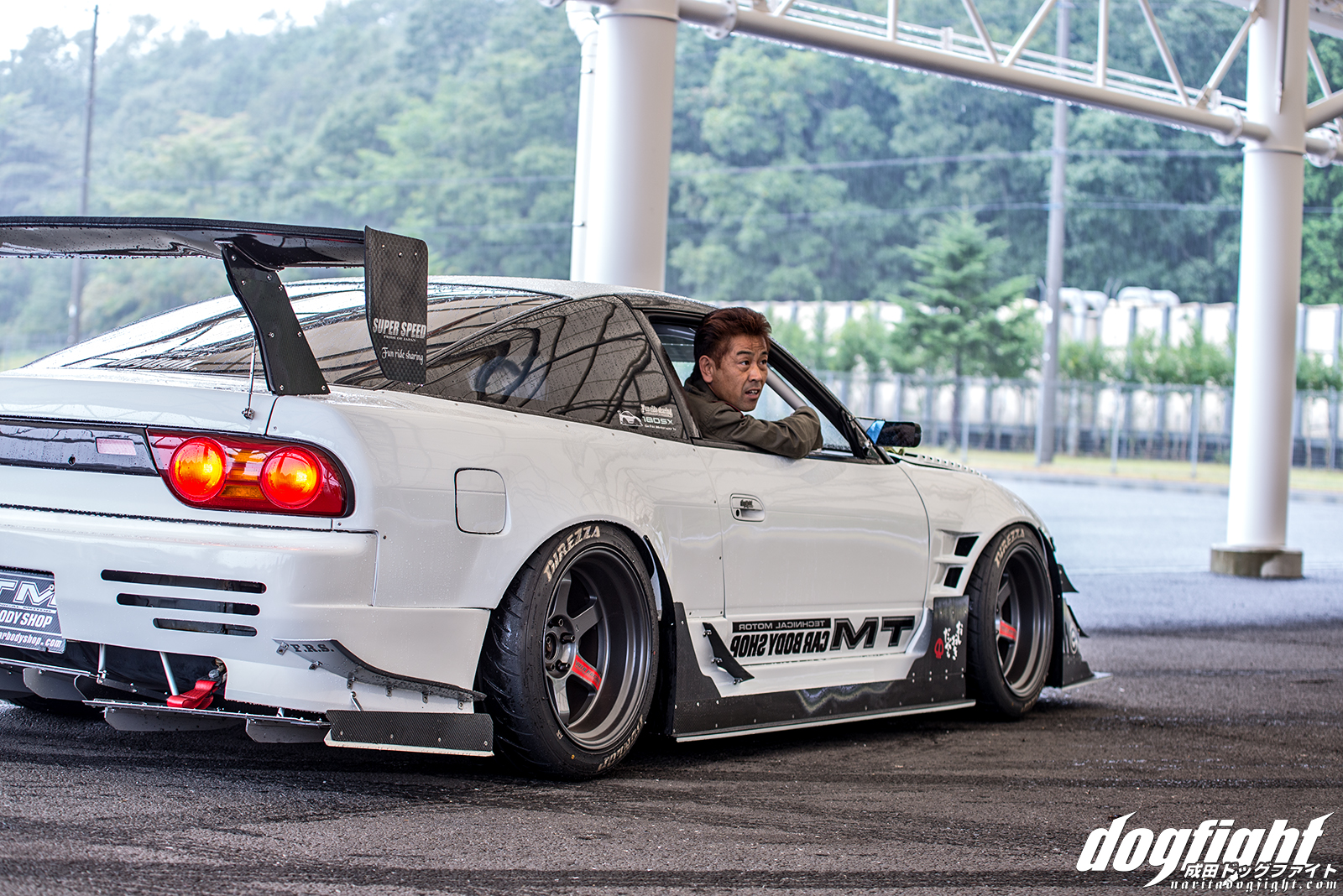 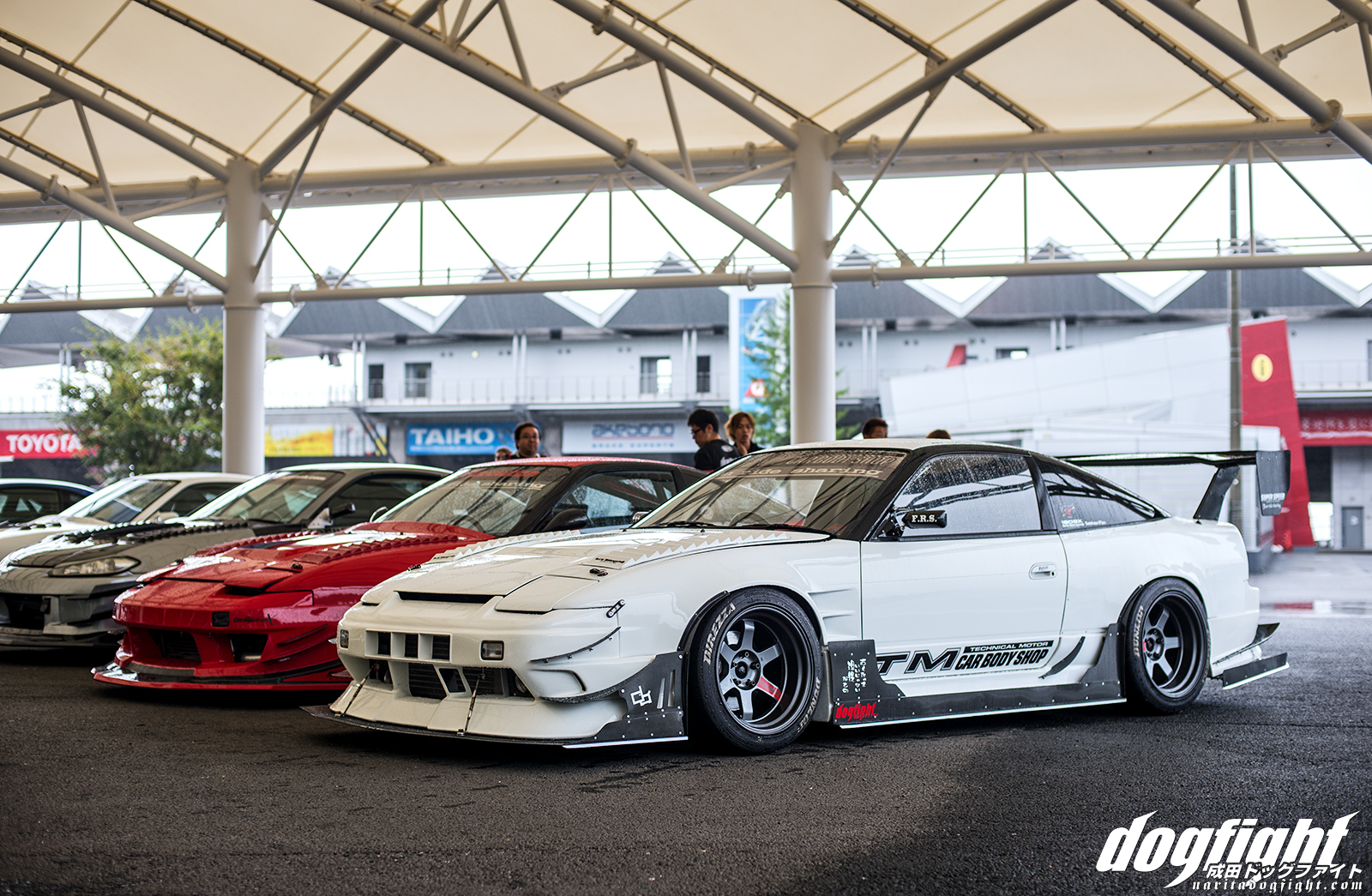 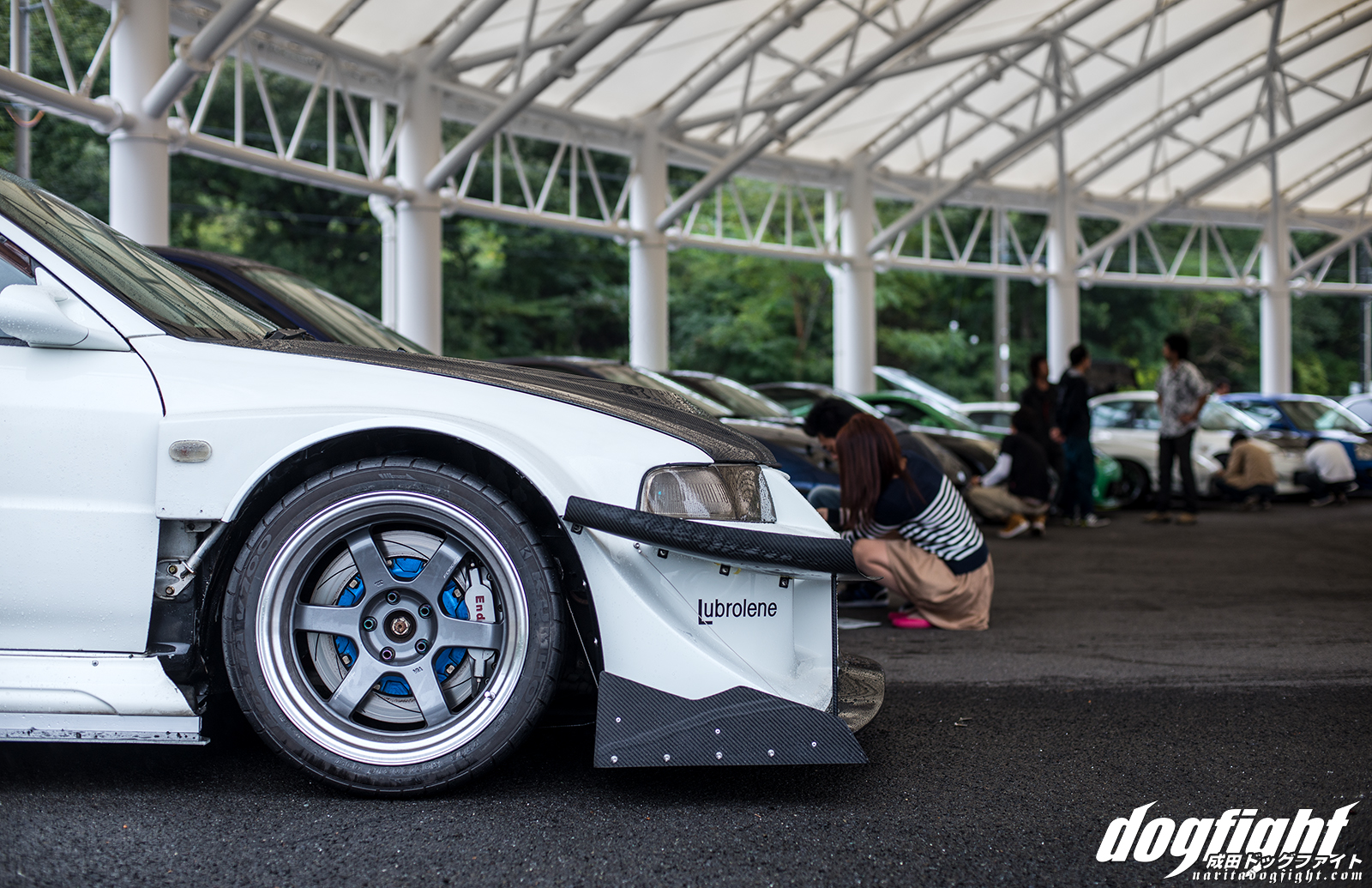 It wasn’t long after that the first few cars came around the corner to the back side of Fuji.  After that it was pretty much a slow trickle for the next hour or so.  I was excited that Morita-san made it out in his Evo 6, as well as a handful of other Evo’s. 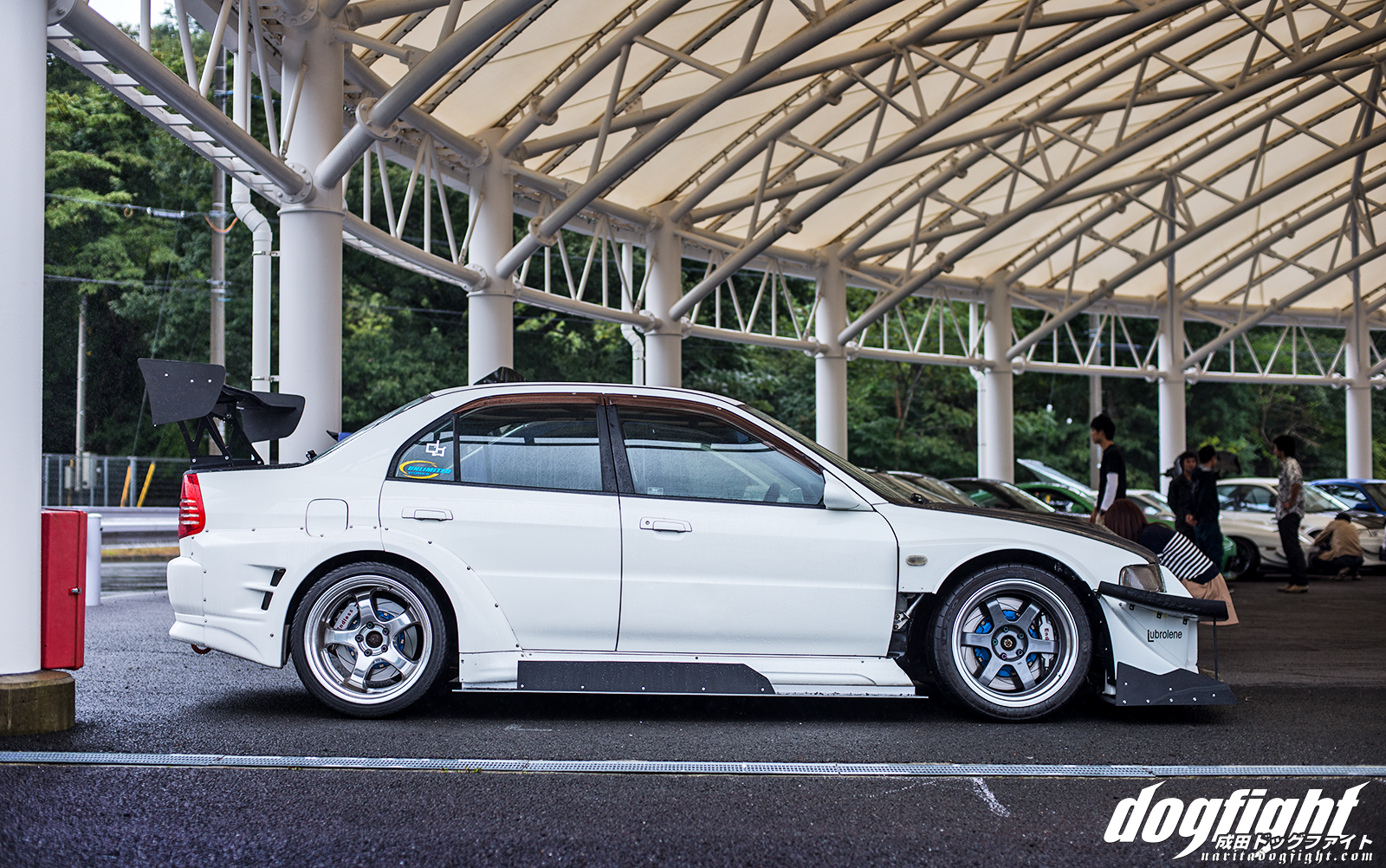 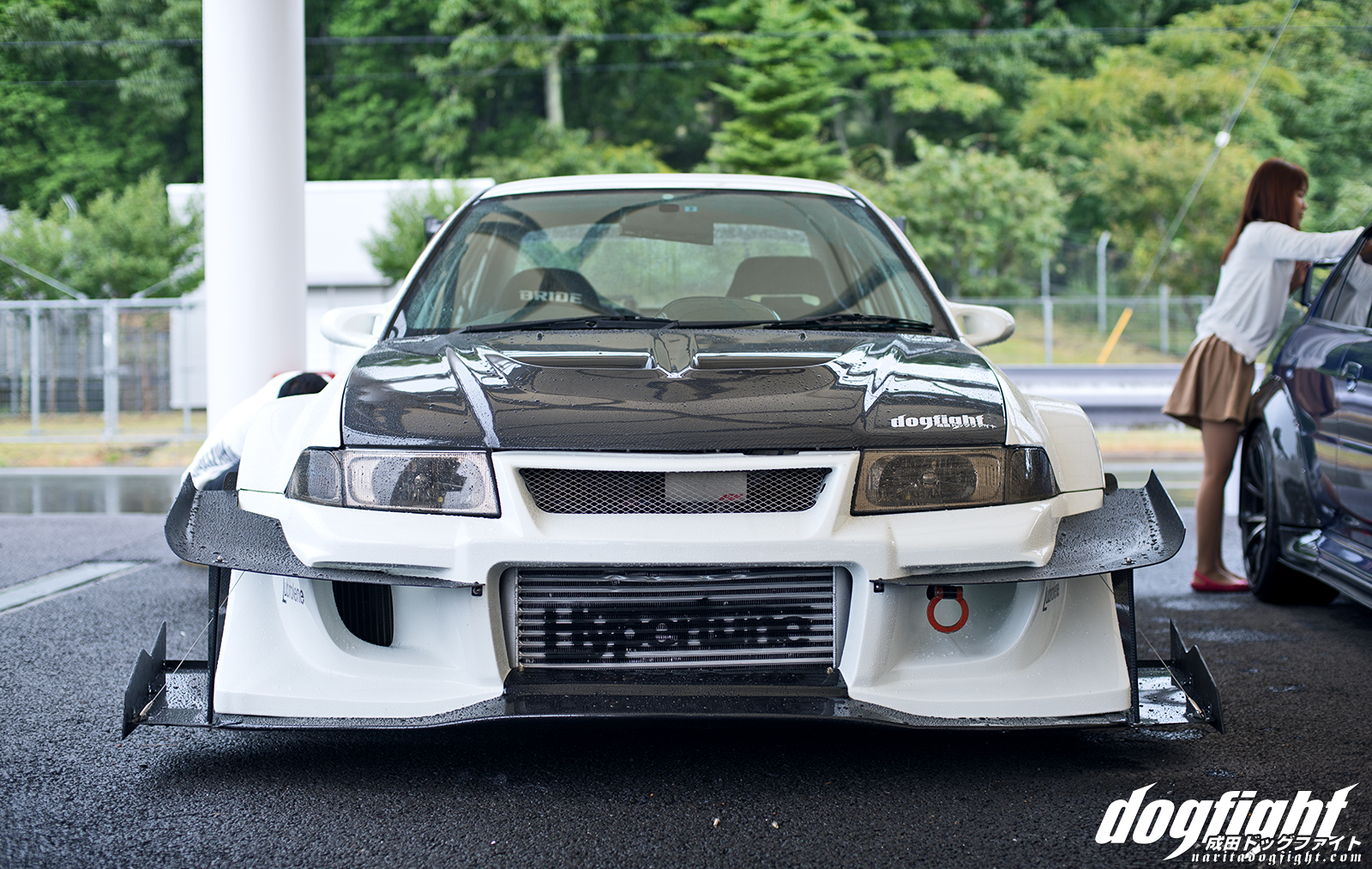 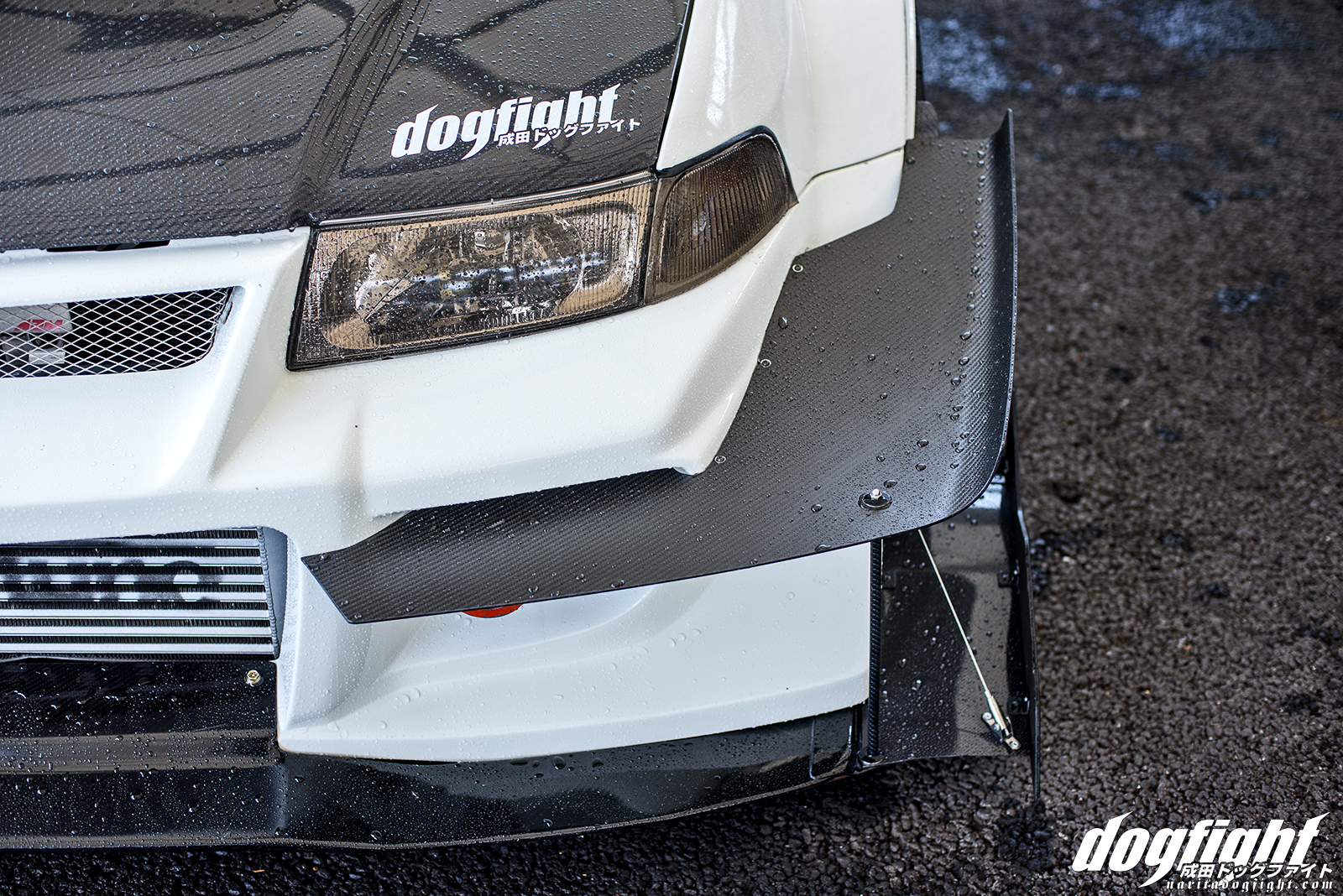 After the meet I shot a few of the cars separately to do a couple spotlight articles for the site.  Morita’s Evo was one of them. 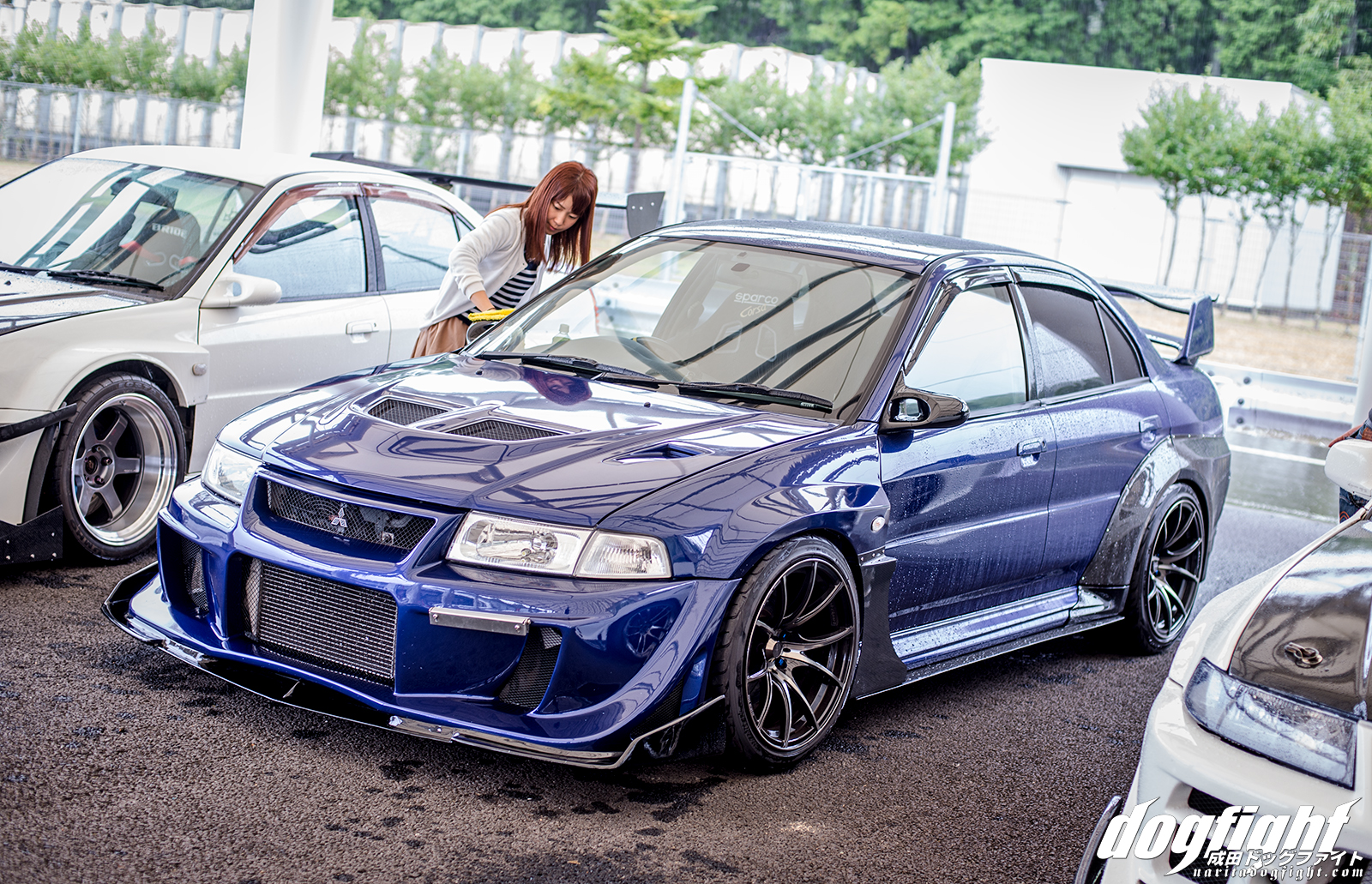 Was stoked to see Chika made it out!  Her Evo is pretty unique, and looked right at home next to Morita’s.

Jun-san made it out with his one-off S15.  I’ll have more of this in a feature article in the coming week. 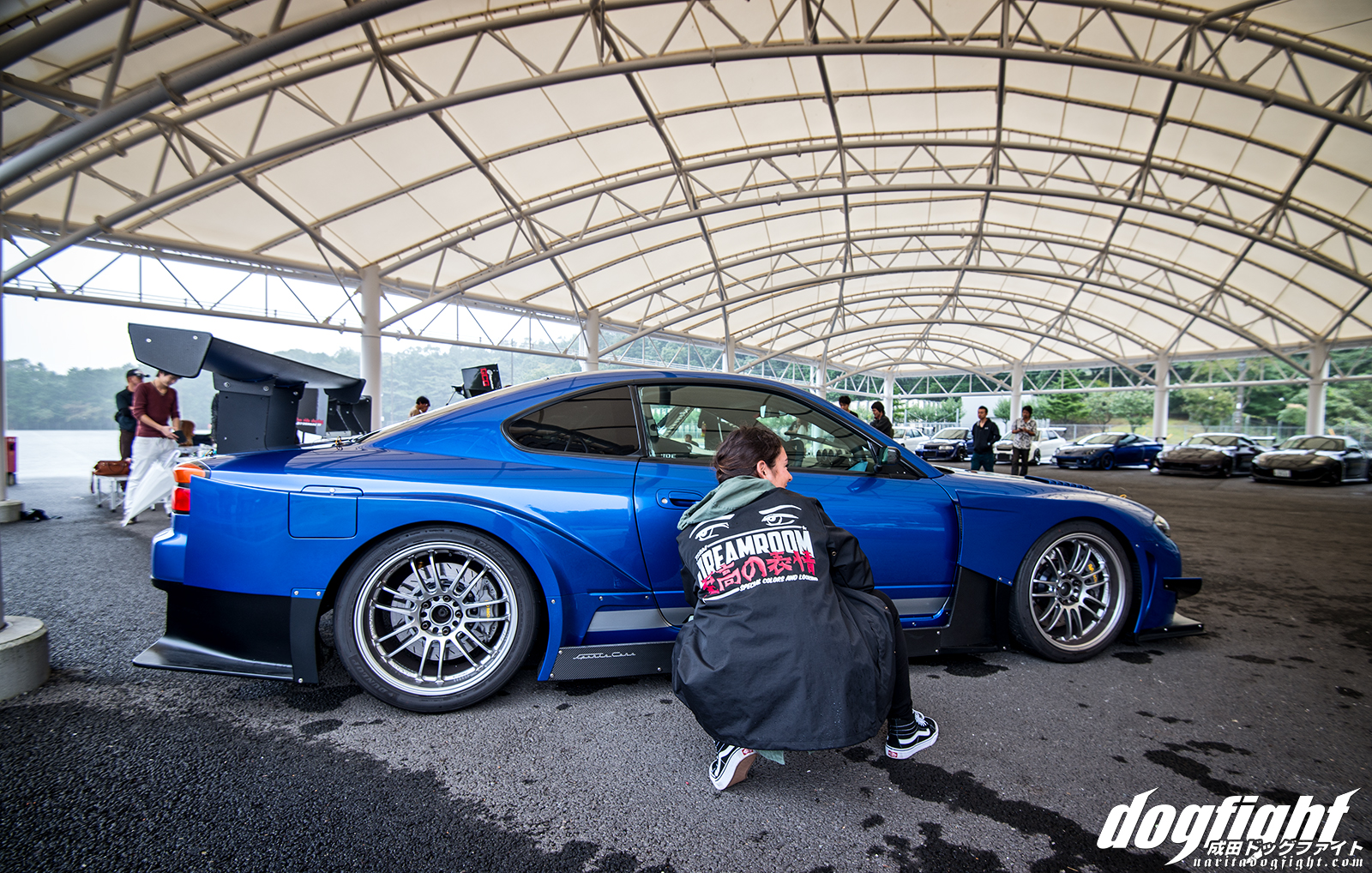 I have a lot more from the meet to come, but I gotta run to work now.  I’m also headed East tomorrow for Final Bout SSE, in New Hampshire, so not sure how quickly I’ll be able to get the next set of photos out.  I wanted to have something up for me to finish though.  Thanks for viewing ~