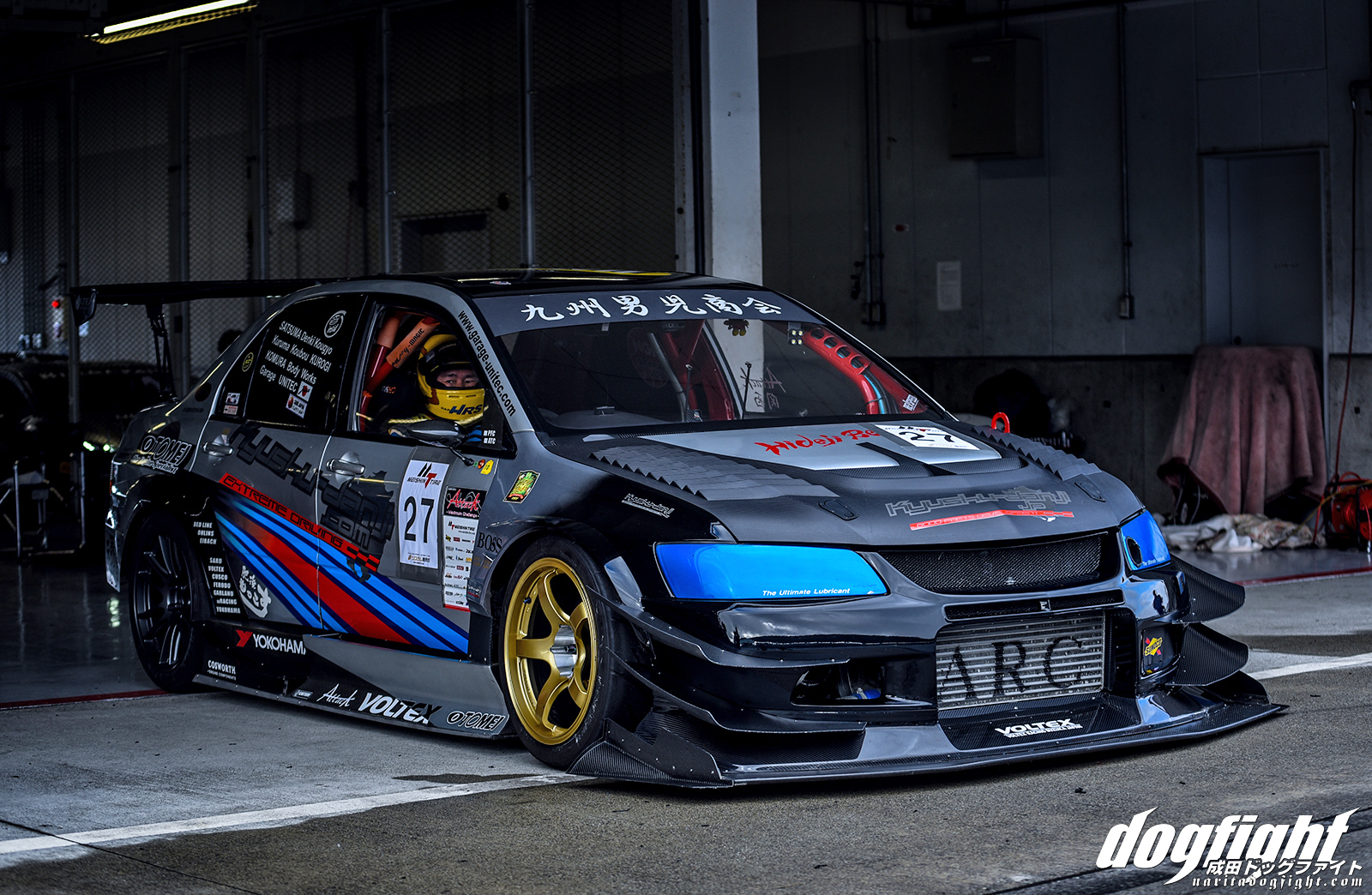 The concept of forming an amateur race team is something that appeals to quite a few of us.  Aside from the obvious attraction of building race cars with your friends, there’s the added benefits of friendly competition, commradery and support among teammates; turns out there’s more positives to emulating Initial D than just looking cool.  As a result we see attempts of this springing up all over the world – some good, some not so good.  While we may have a ways to go on this side of the Pacific in making names for ourselves, no one in Japan does it better than the boys from Kyushu – ‘Kyushu Danji’; quite possibly the most notable and dedicated, time attack team in Japan.

The 20 member organization is based on Japan’s third largest island, and coincidentally the most mountainous (pretty advantageous for a race team).  What started out as small group of friends that enjoyed building and driving their cars individually on track, quickly turned into one of the most seriously driven race teams in Japan.  Back in 1998, Tsutomu Hannita (owner of the white, widebody NSX), along with Shimada and a few other local boys met for an open track day – kicking off a relationship that would soon be comprised of years of automotive growth together.  With Autopolis as their home track, there was never a shortage of arranged track days to hone their skills and perfect their cars.  As time went on, the group grew, and they became much more serious about the sport they once used as a weekend hobby.  Shimada took it upon himself to establish a webpage for the team, and even began seeking out sponsorships and Kyushu Danji spec’d parts from various vendors (they now work very closely with AP Racing and Voltex).  It didn’t take long for Shimada to become the focal point of KD, and one of their most prominent members.  Since then, one of the team members, Sumihiko Miyata (the owner of one of the white R34s) just last year competed in World Time Attack Challenge in Australia, and took home 3rd place in his class.  In a solid showing of synergy, several of the Kyushu Danji members made the long trek to Australia to support Sumihiko; Shimada included.  It’s a testament to the solidarity of the group, and how far they go to support one another. 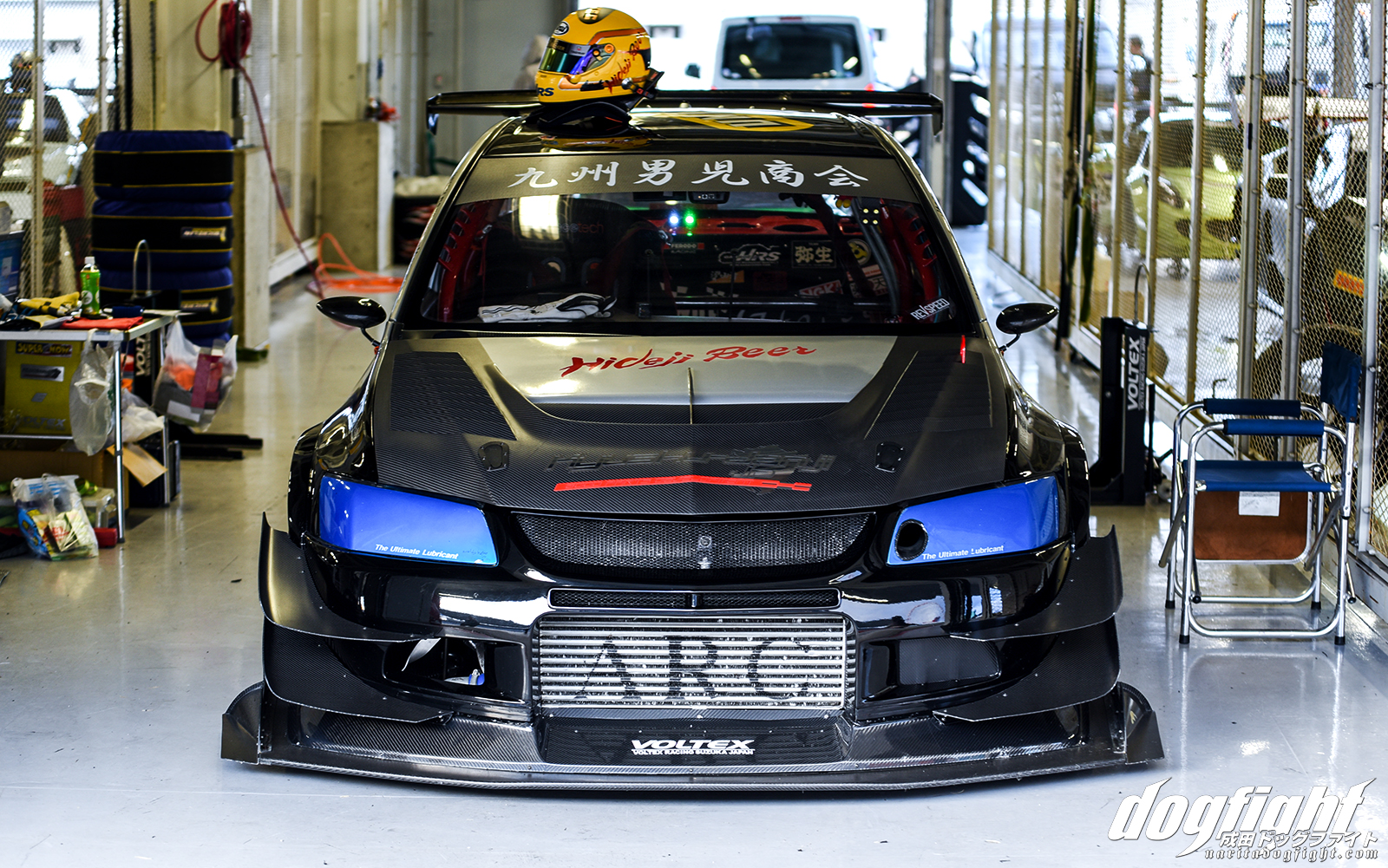 Hiroyoshi Shimada, an electrical engineer by trade, has always been a fan of the Evolution.  Having owned a handful of different ones throughout the past several years, he’s grown quite the firm knowledge base of the car’s specifications.  His EVO VII in it’s current state is the result of Shimada converting that knowledge into a tangible state.  Years of research, development collaborations with racing companies, and countless test days have brought him this.  The finished product represents both him and the spirit of Kyushu Danji.  Most of the time when I ask car owners what their goal is for a particular build, they respond with pretty vague answers; they enjoy the style of motor sport, they’ve always loved that particular type of car, etc., etc.  When I asked Shimada what goal he made for himself when he set out to build the EVO he responded very simply:

You can’t get much more definitive than that.  I mean, realistically speaking with the sport of time attack, building a car around a precise time and specified track is probably the most decisive way to go about doing it.  With a current best at Autopolis of 1’54.5 he, admittedly, has a ways to go to reach his goal.  The 3 kilometer track is home for Shimada and his team, and they’ve developed a history with the track.  To be able to achieve his goal would not just advance Shimada, but the team as a whole. 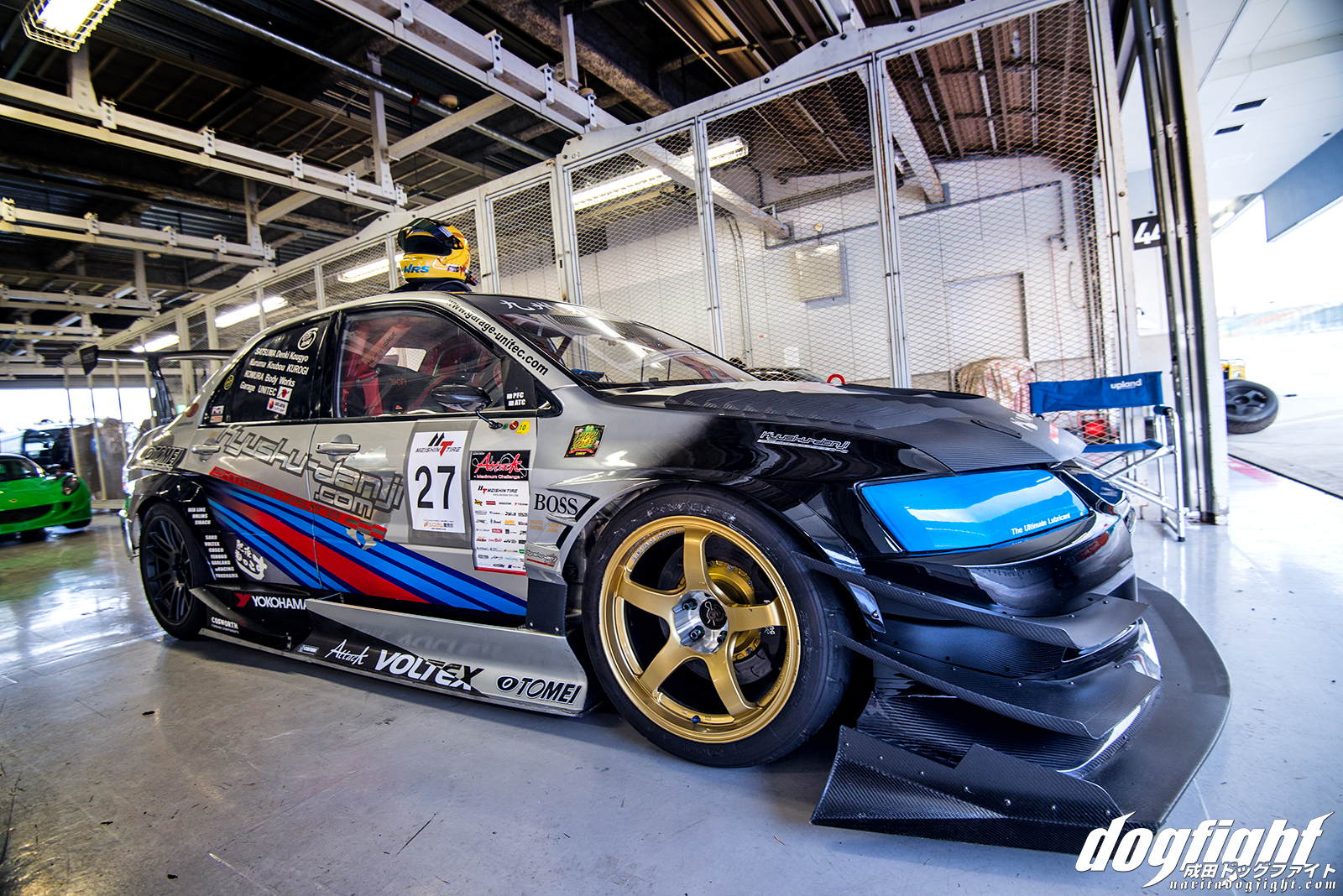 The exterior of the car is clad in Votlex’s newest offering for the EVO VII.  It’s basically a toned downed version of what Voltex had created for Tilton two years ago, or what they unveiled on the G-Force EVO just this year.  Personally, I prefer the look that Shimada has created as I feel like it has a very justifiable time attack look to it without going overboard.  The goal isn’t to shatter course records, the goal is to achieve his personal expectation of himself.  Unfortunately, gone are the days where a near stock body like the Cyber Evo (circa 2004) would be acceptable in the paddock, now that downforce has been somewhat re-discovered to be more than vital in lowering times. Then again, I suppose you can’t really consider the Cyber Evo having a stock body, but it certainly had less aero than most cars in the lineup today.  Regardless, aesthetics have never been lost on Japanese builds and there are a few good takeaways from that.  Actually,  Shimada in his own words said that the overall appearance he was going for is,

I think he’s done just that. 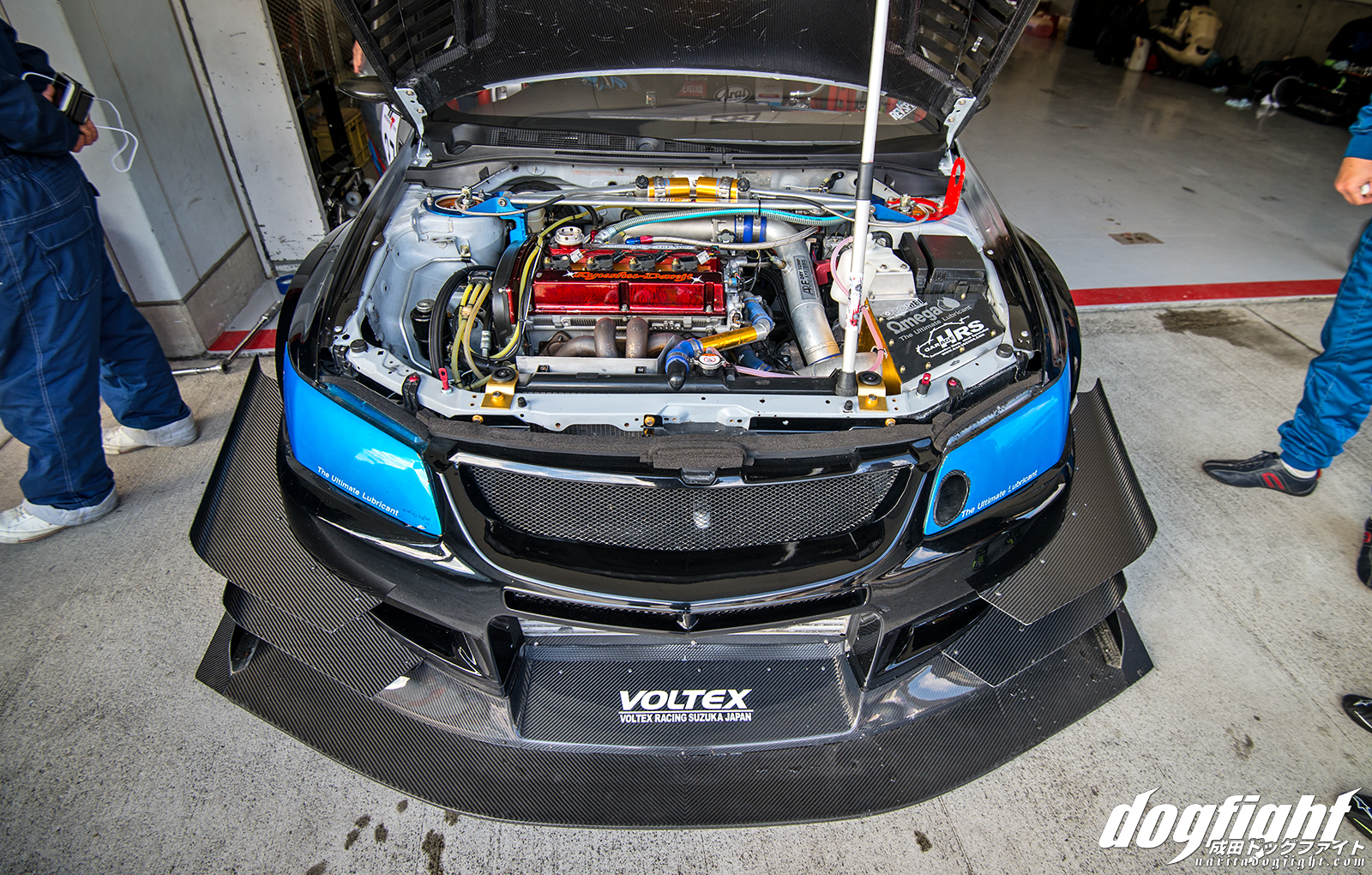 Again, with that in mind, you won’t be finding some incredibly overbuilt 1000hp 4G63 under the hood.  What you will find is a motor that puts out just the right amount of power and balance to not leave any horsepower unused.  The original motor was revamped using a BC 2.2 liter stroker kit and put back together using a completely new head built by Cosworth with the added power of a pair of Kelford cams. 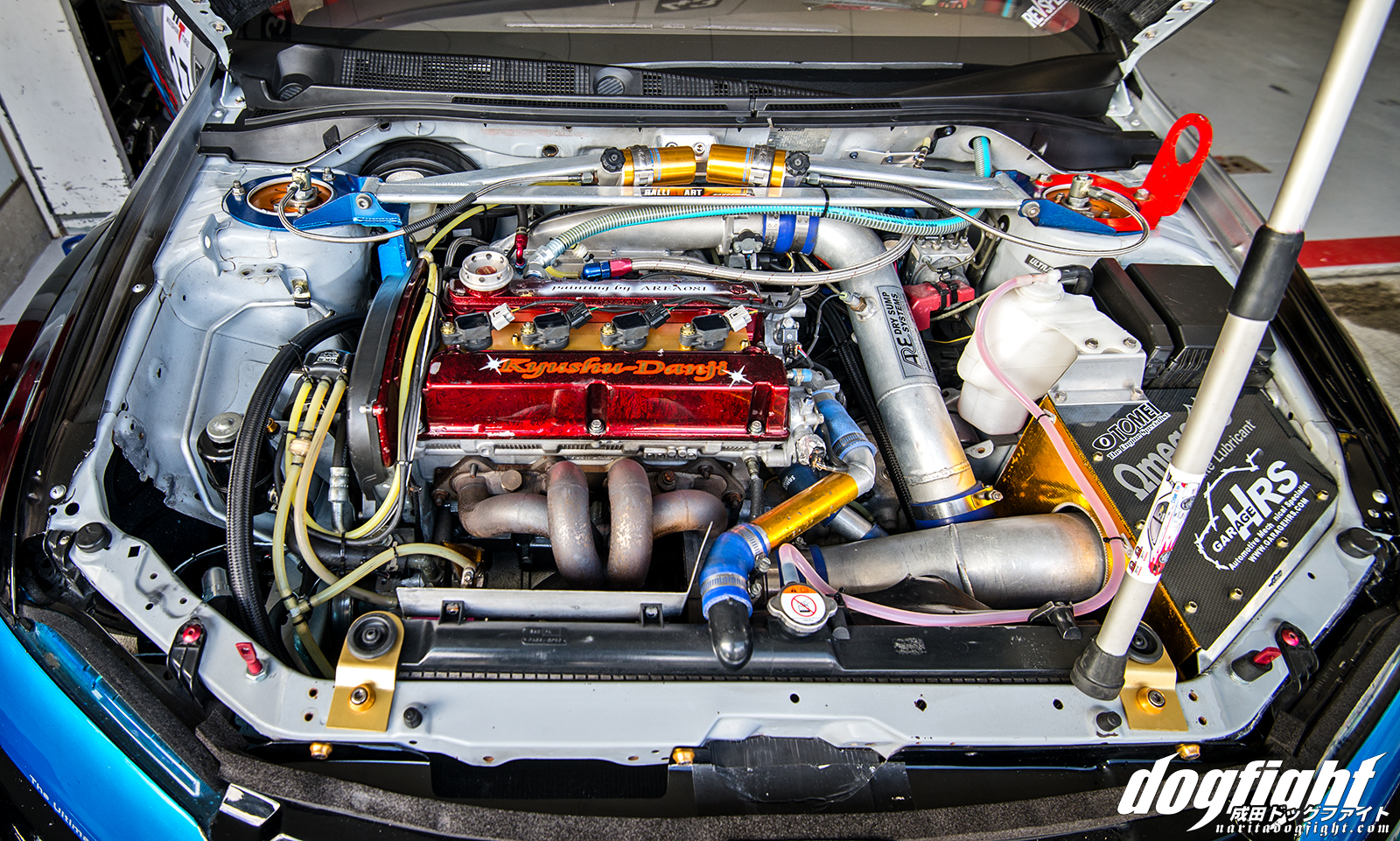 Combined with the new EFR 8374 turbine, and tuned using a very capable AEM EMS ECU, the motor puts out a very usable, and quite safe, 600ps to the wheels. 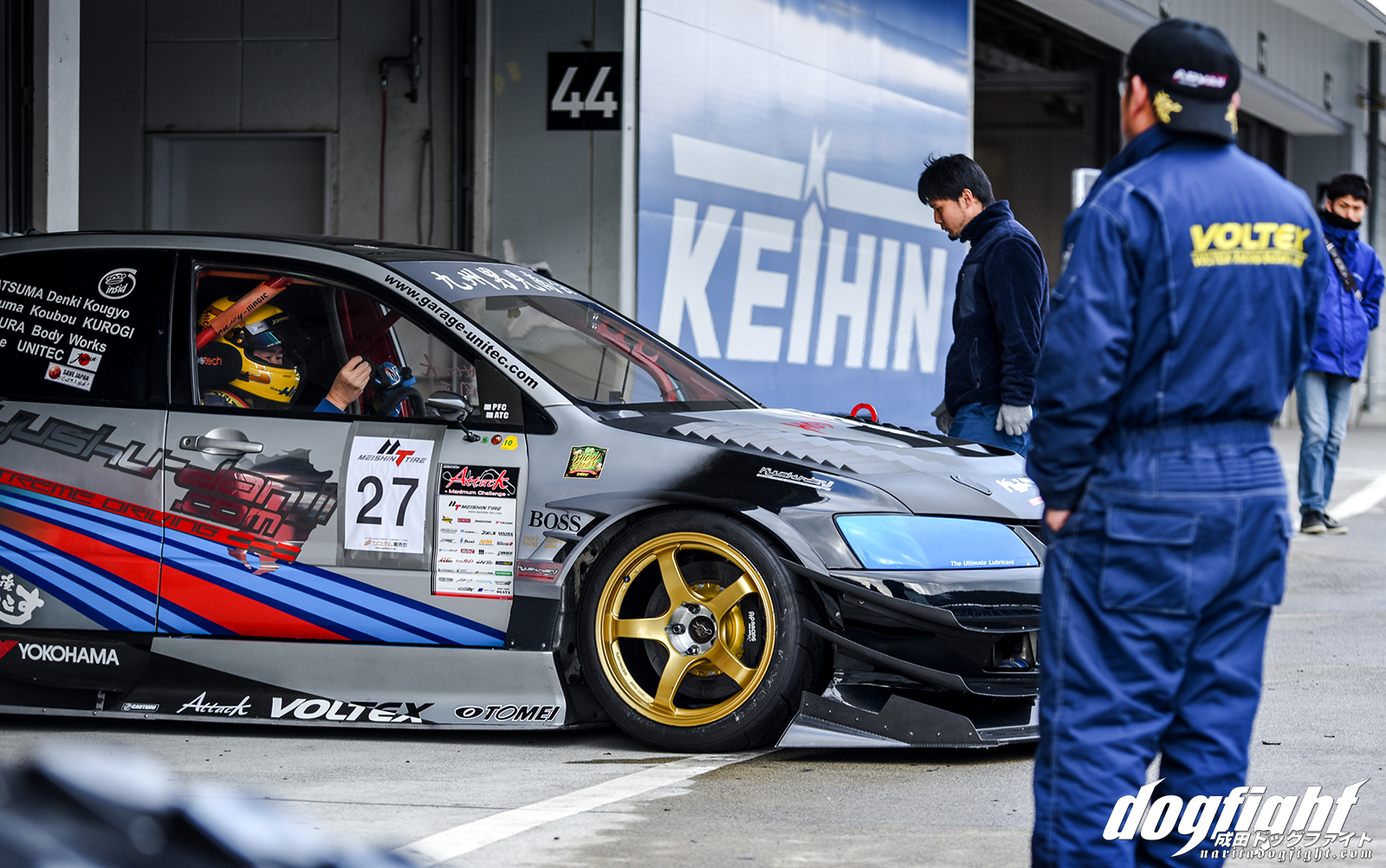 The potential of that power would be lost if the car wasn’t setup properly to use it.  That’s where a set of custom spec’d Ohlins dampers comes into play.  Tomiyoshi Racing, Shimada’s support shop, has worked closely with Ohlins to develop specific parameters for use on the EVO VII.

It really does have a unique look; almost like a combination of playful and menacing. 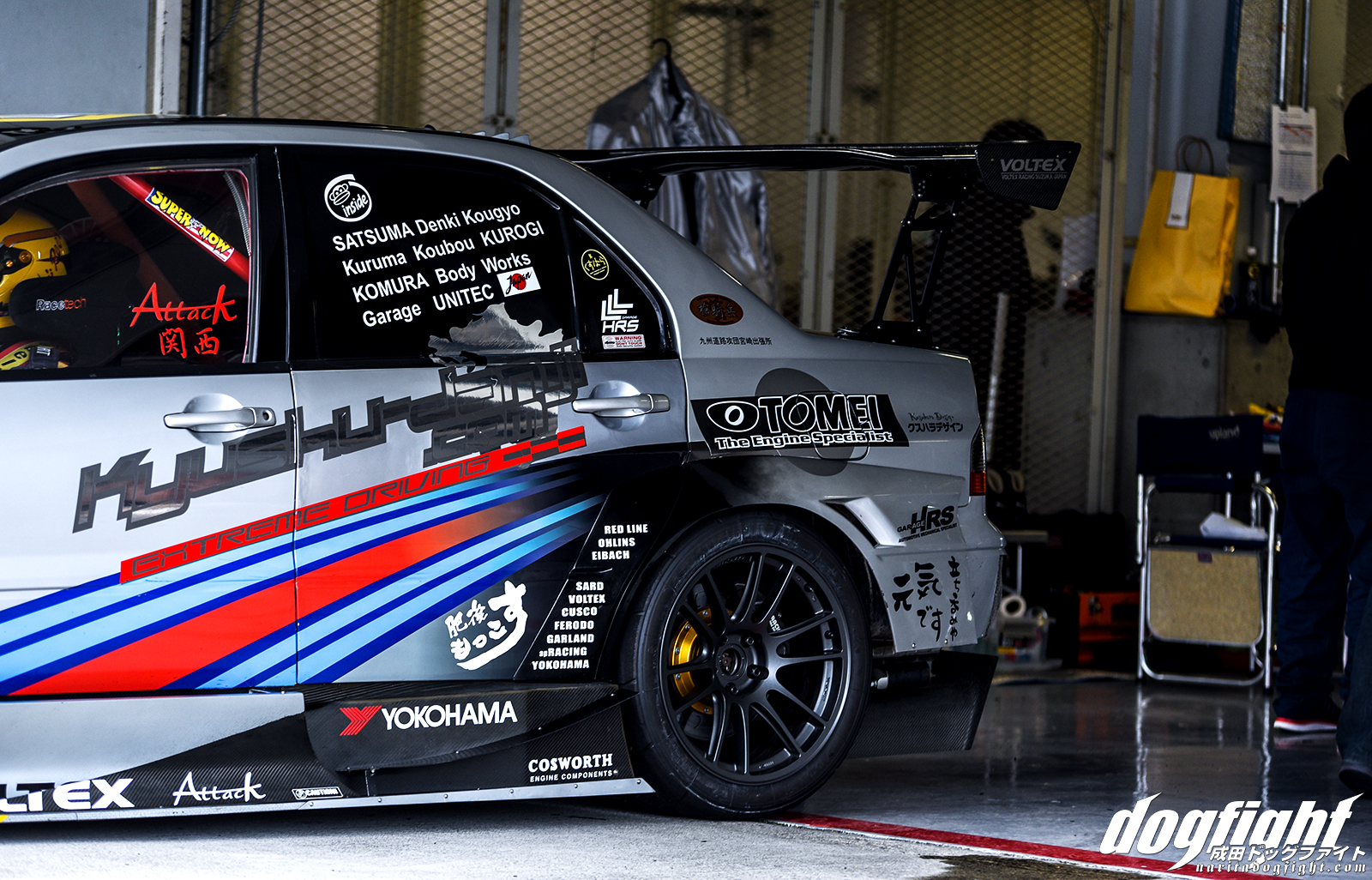 295/35/18 Advan A050 tires are wrapped around a variety of wheels used on circuit.  From Advans, AMEs, Rays, and Enkeis, you won’t find a shortage of diversity at each end; but you can guarantee that they’ll always look good. 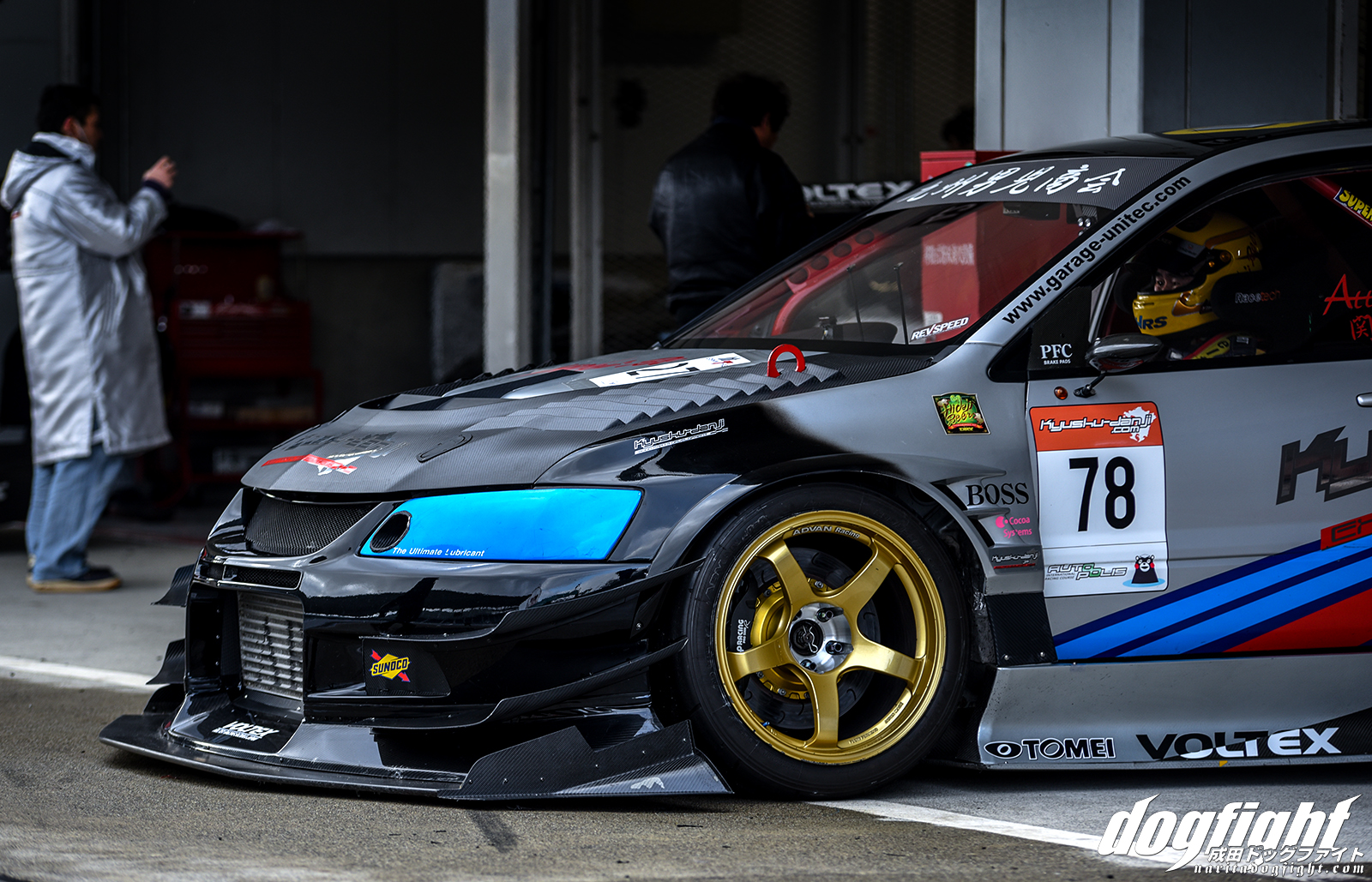 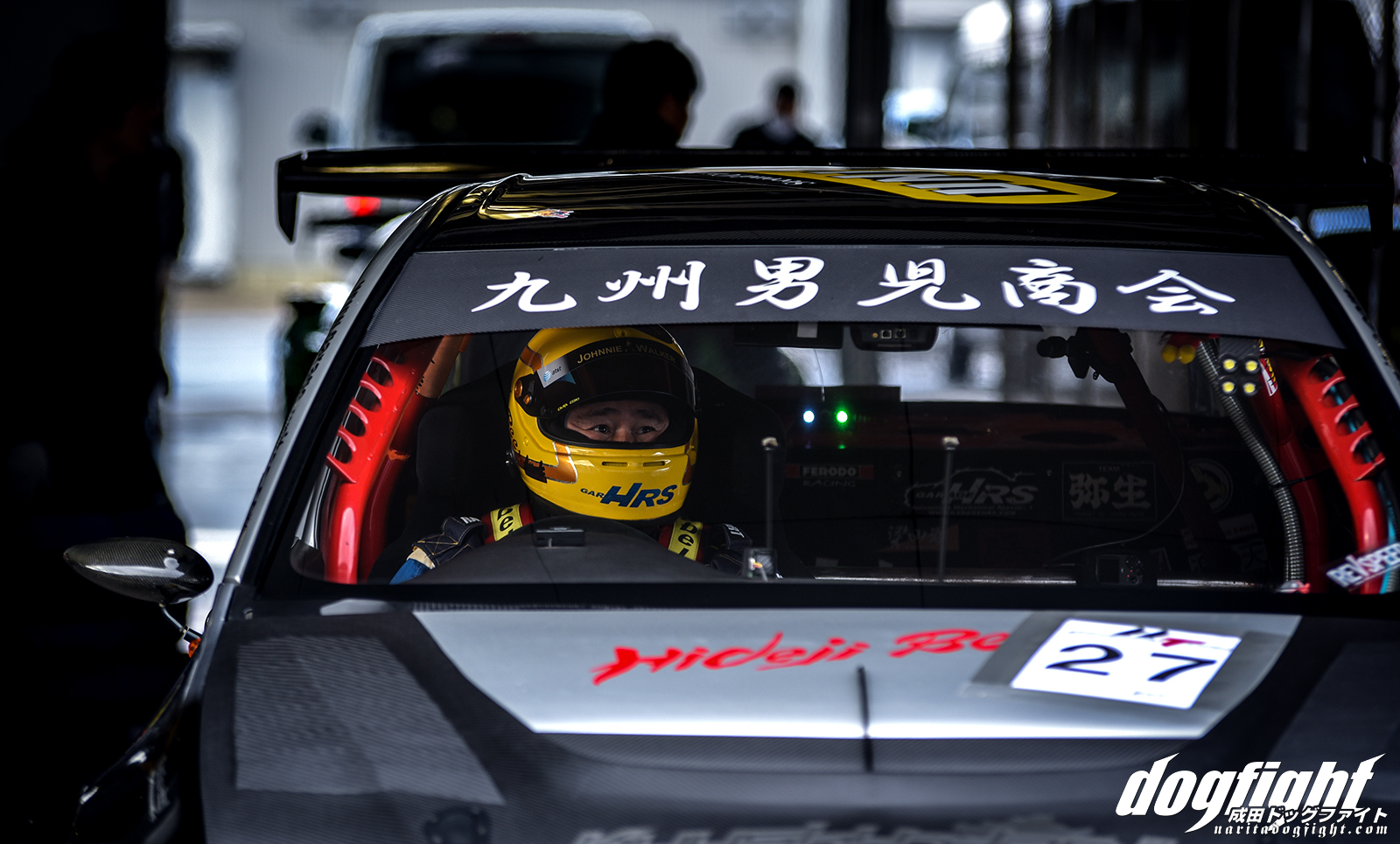 Shimada anxiously waiting to head out on track.  I spotted the two lights behind him in this shot and had wondered what they were.  Turns out that they are used for the confirmation of the fuel pump drive system; both a visual safety feature, as well as a very GT’esque look to the cabin.

A lot of work has gone in to reduce the curb weight of the hefty AWD machine.  Carbon units replace the OE hood, trunk and even roof of the EVO.  The interior has been reduced to only the necessities resulting in a new weight of about 1240kg; roughly 2733 pounds. 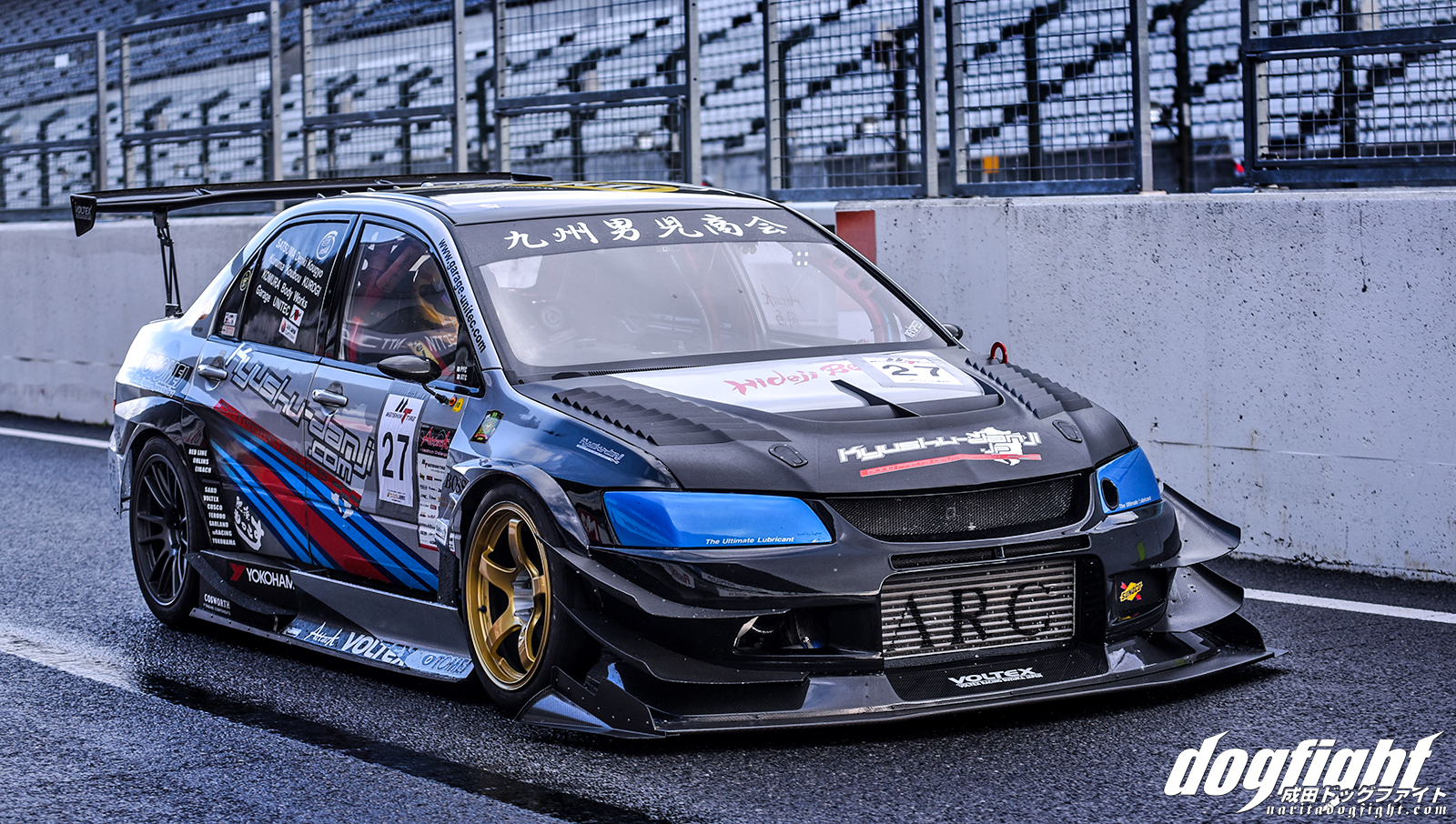 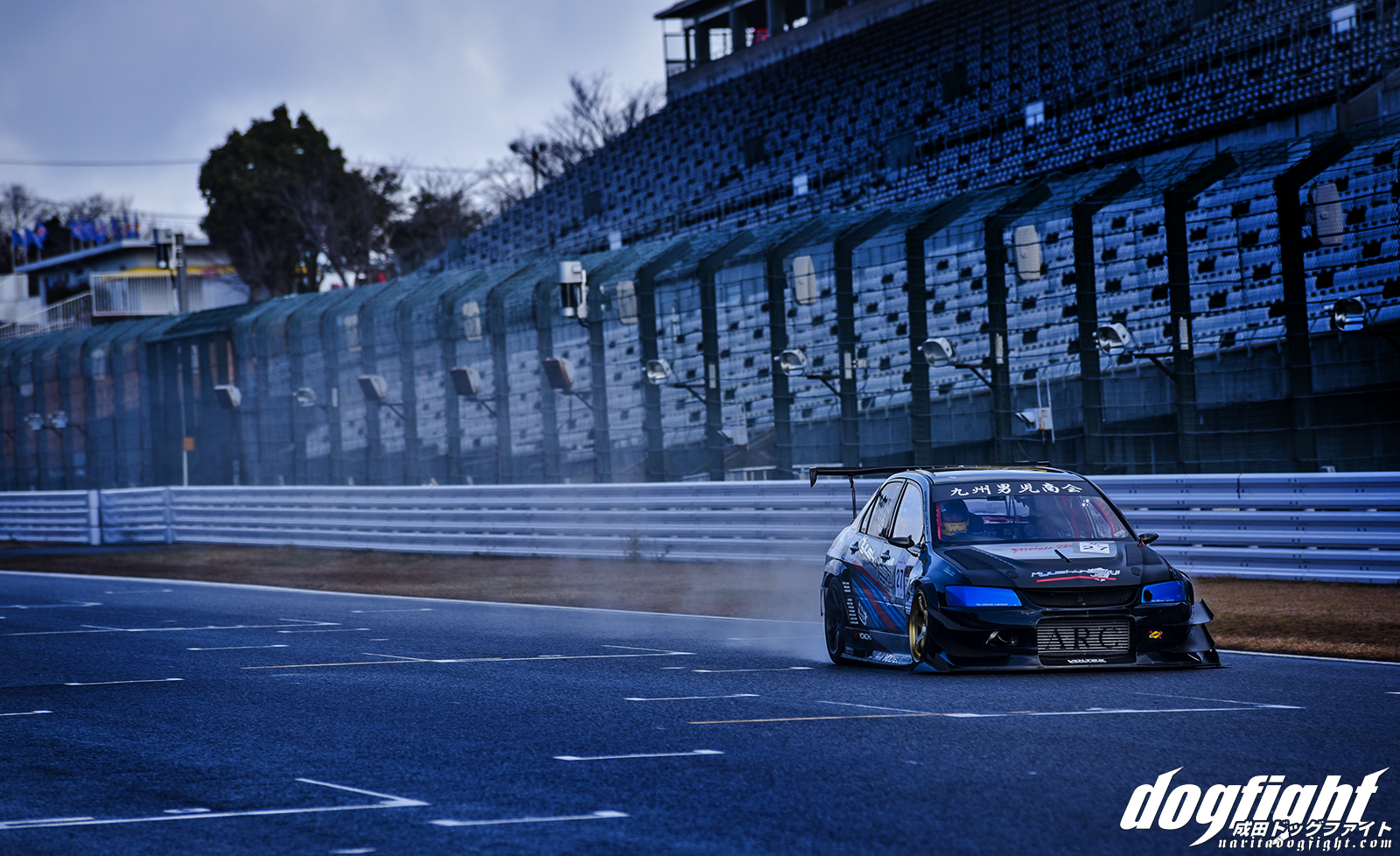 The front straight of Suzuka Circuit is both an exciting and frightening place both on and off track.  Watching the cars pass by towards the end headed into turn 1, I couldn’t believe that these were just privateers driving.  The speeds they reach are incredible, and the way they push themselves is very inspiring.  It’s almost as if they’re on the cusp of professionalism, and honestly if you didn’t know any better, you wouldn’t be able to tell otherwise.

Shimada did a great job controlling the car in the wet.

For the first time at Suzuka the duo performed well.  Unfortunately, no one was really able to put down a best time due to the track conditions.  Actually while we were leaving it had started snowing again. 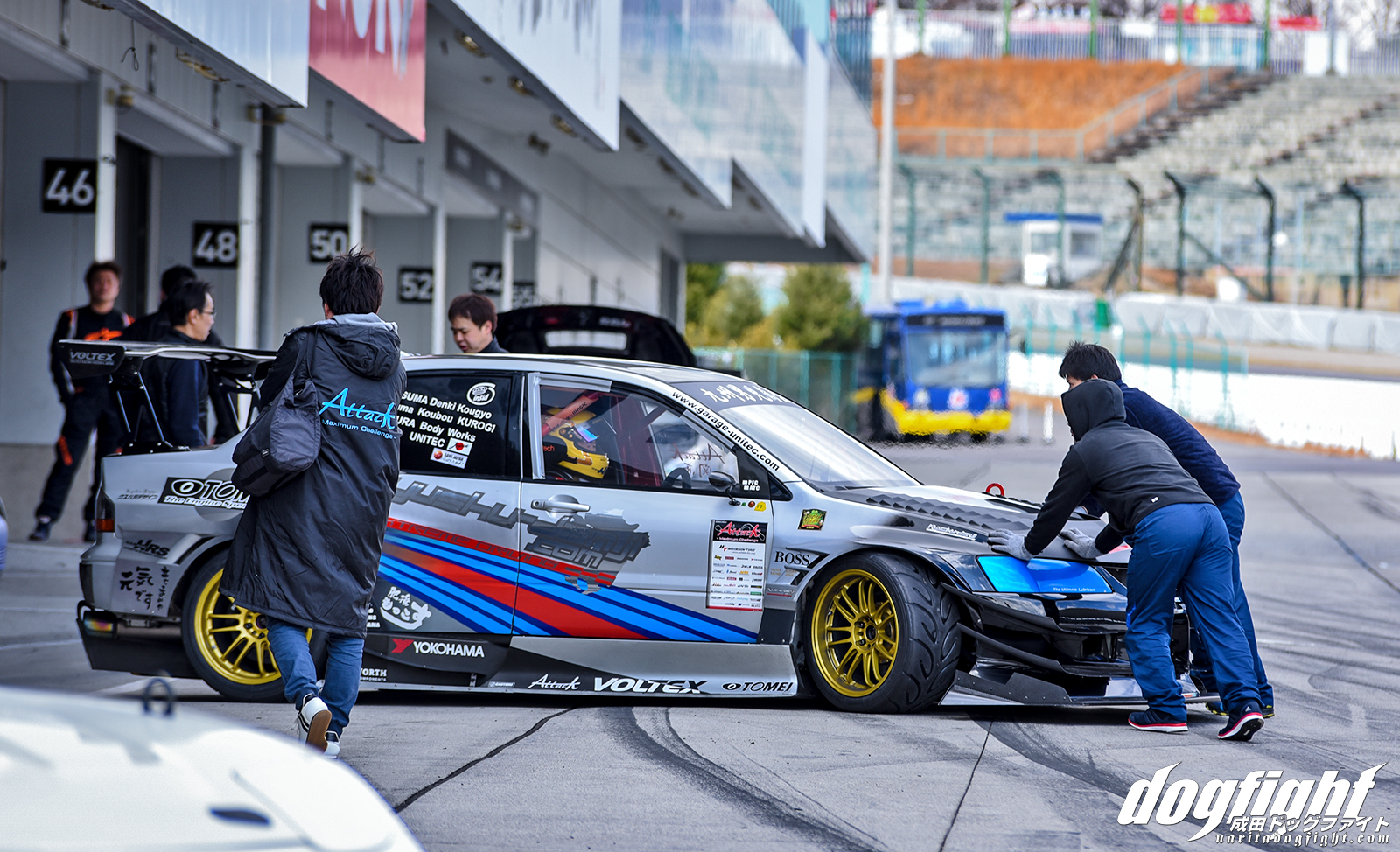 There’s not many places you’d catch Shimada other than Tomiyoshi, his garage, or the race track – maybe you’d catch him sneaking bites of Unagi at his favorite restaurant.  But, it’s this rare type of dedication that leads to great builds like this, and great teams like Kyushu Danji.  I hope to visit Autopolis soon, and witness the team driving together on track.  There’s a lot to learn from each member and it’d be an honor to share each one’s story with you.