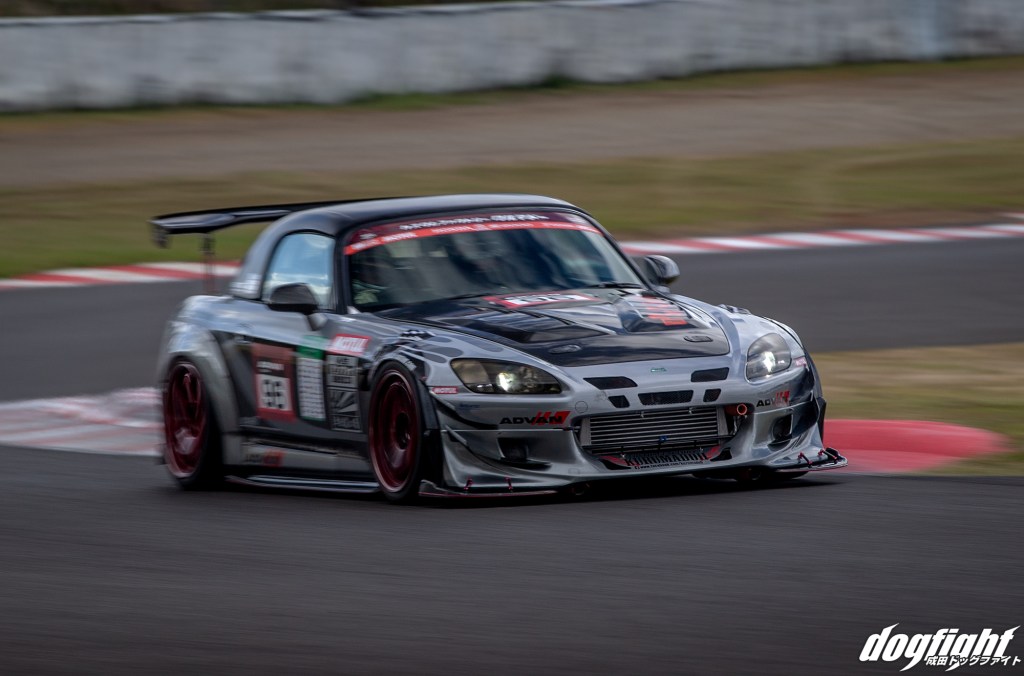 When the Good Luck Festival driver lineup was announced towards the middle of last October, I was quite surprised to see the Kurumadoh S2000 on the list.  Not that this car is a stranger to the circuit, but that Sportsland Sugo is very far from the shops home base in Oshu City.

Based out of the Iwate prefecture off the northeastern coast of Honshu, Custom Factory Kurumadoh has been managed since 2006 by the 45 year old tuner, Mr. Kouki Yamada.  Having an interest in driving on track from a young age, Yamada gained his knowledge in automotive tuning and repair from fixing and upgrading his own vehicles.  Yamada’s unmistakable taste is part of the reason the S2000 looks the way it does. The concept for the build was simple – to develop a street style car that performs well at the circuit, with no issues and without sacrificing comfort.

The very distinct styling of the shop’s AP1 demo car comes with it either praise or rather distinct criticism; never any really middle ground.  Whichever side of the fence you find yourself on, there should be no arguing the capability of the car.  Winning many trophies at events like SS Trophy Tuner Battle, the Sugo 3 hour endurance, and Sendai Highland Time Trials, the car and driver have proved their capabilities plenty over the years. 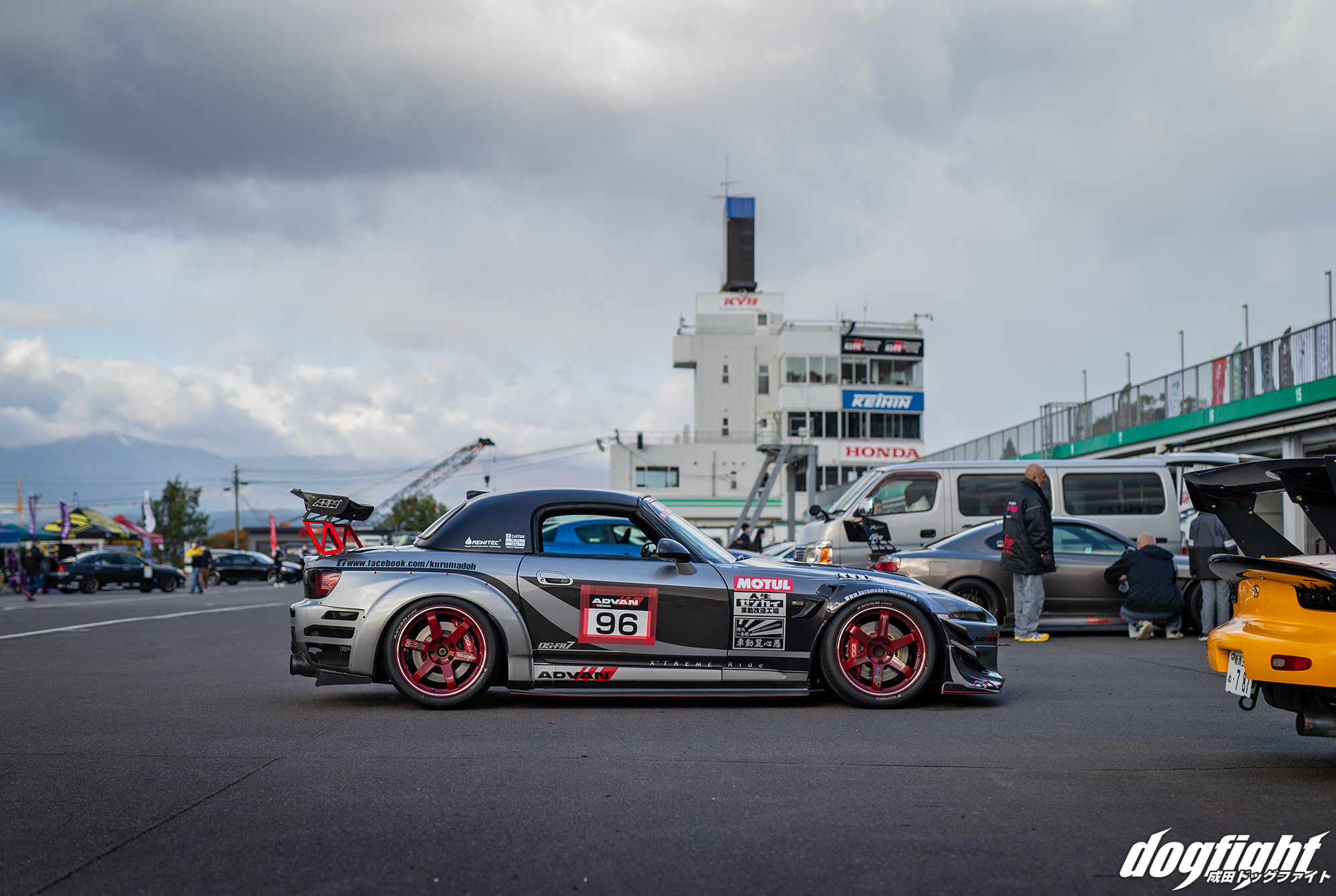 During the Attack Tohoku event this year at Sugo, Yamada drove the S2000 to a best time of 1’30.969, better his previous best of 1’31.308 by almost half a second.  However, conditions did not permit the team to reach the mid 30’s, which was their goal going into the event.  Given the amount of travel that it takes to attend an event in this area, I’m glad Yamada was able to at least better his previous time. 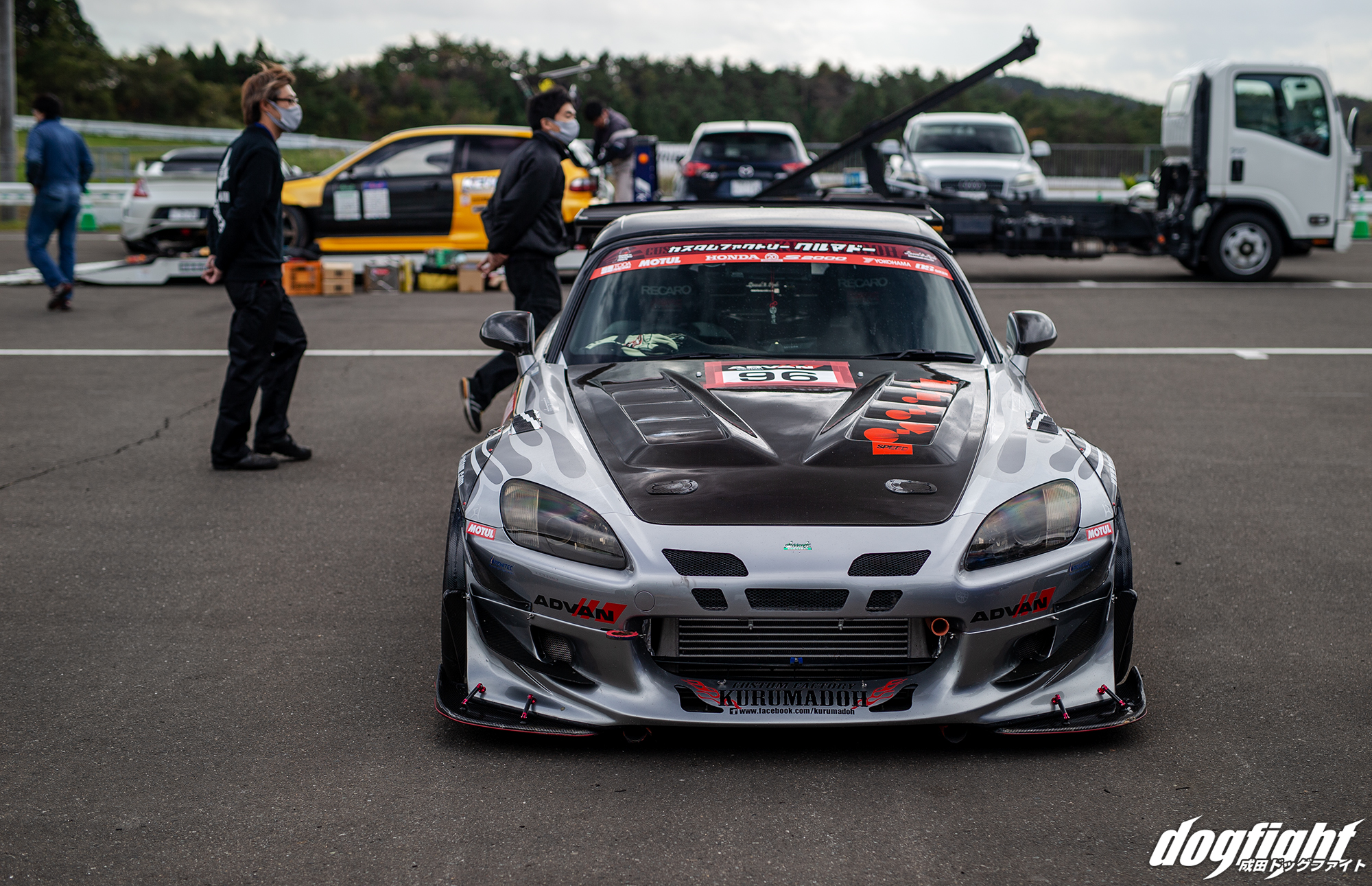 The second thing you’d notice on this car, after you took a few minutes to digest the unique mixture of aero parts on the exterior, would be the large FMIC making it’s home behind the front bumper.  The stroked, 2.2l F20C sports a healthy amount of boost with the help of a HKS GTS7040 Supercharger.  Other power adders include a pair of TODA A2 camshafts and full TODA exhaust.  A custom spec’d OS Giken LSD helps put all 400 horsepower down to the pavement. 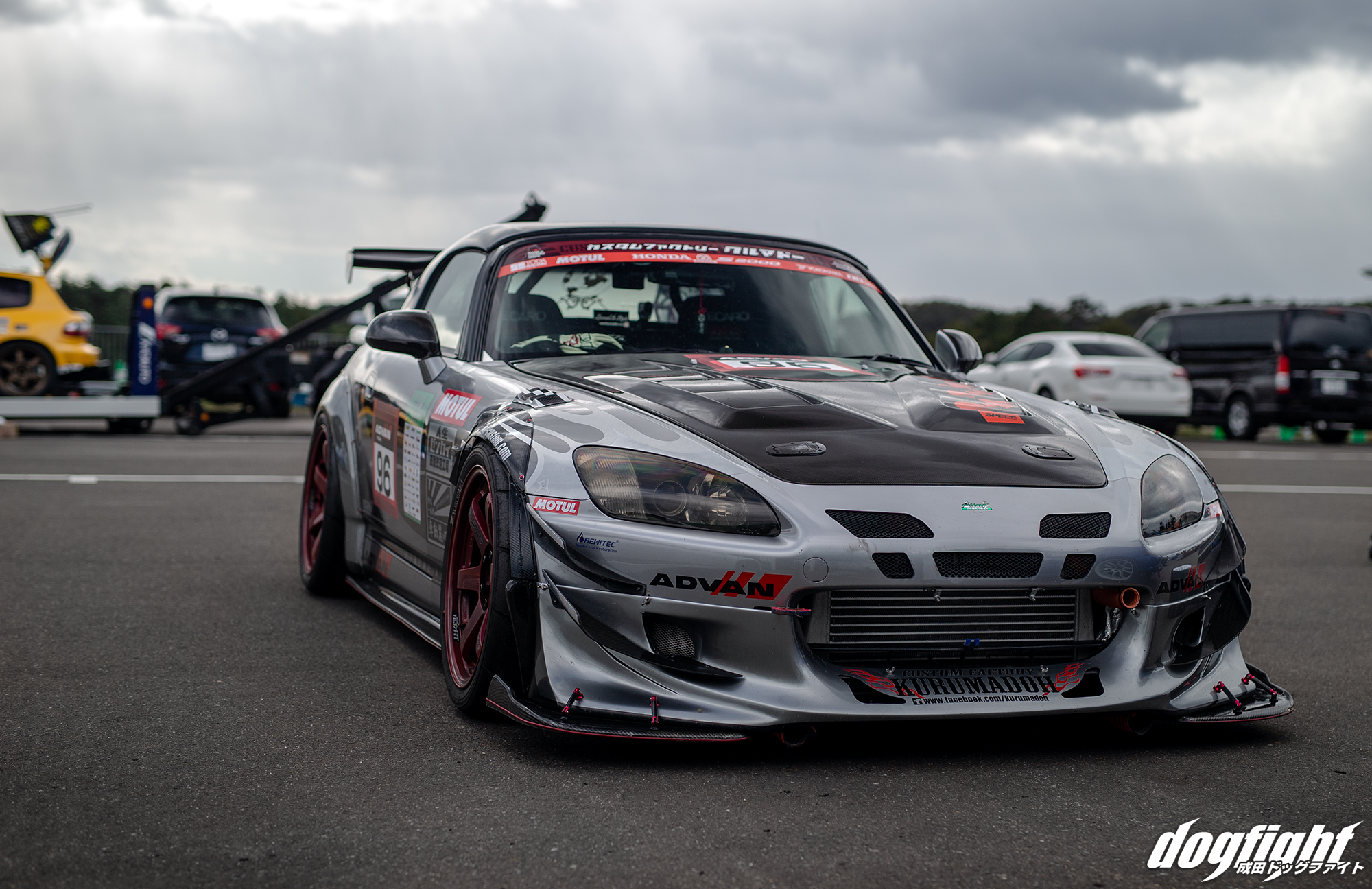 Tein Super Racing damper fitted at all four corners assist the car in getting to and from the track when not trailered, and also to the convenience store for lunch when needed.  Why not, since this car remains street registered.  It also has full interior including a working air conditioning for those hot, humid Japan Summers. 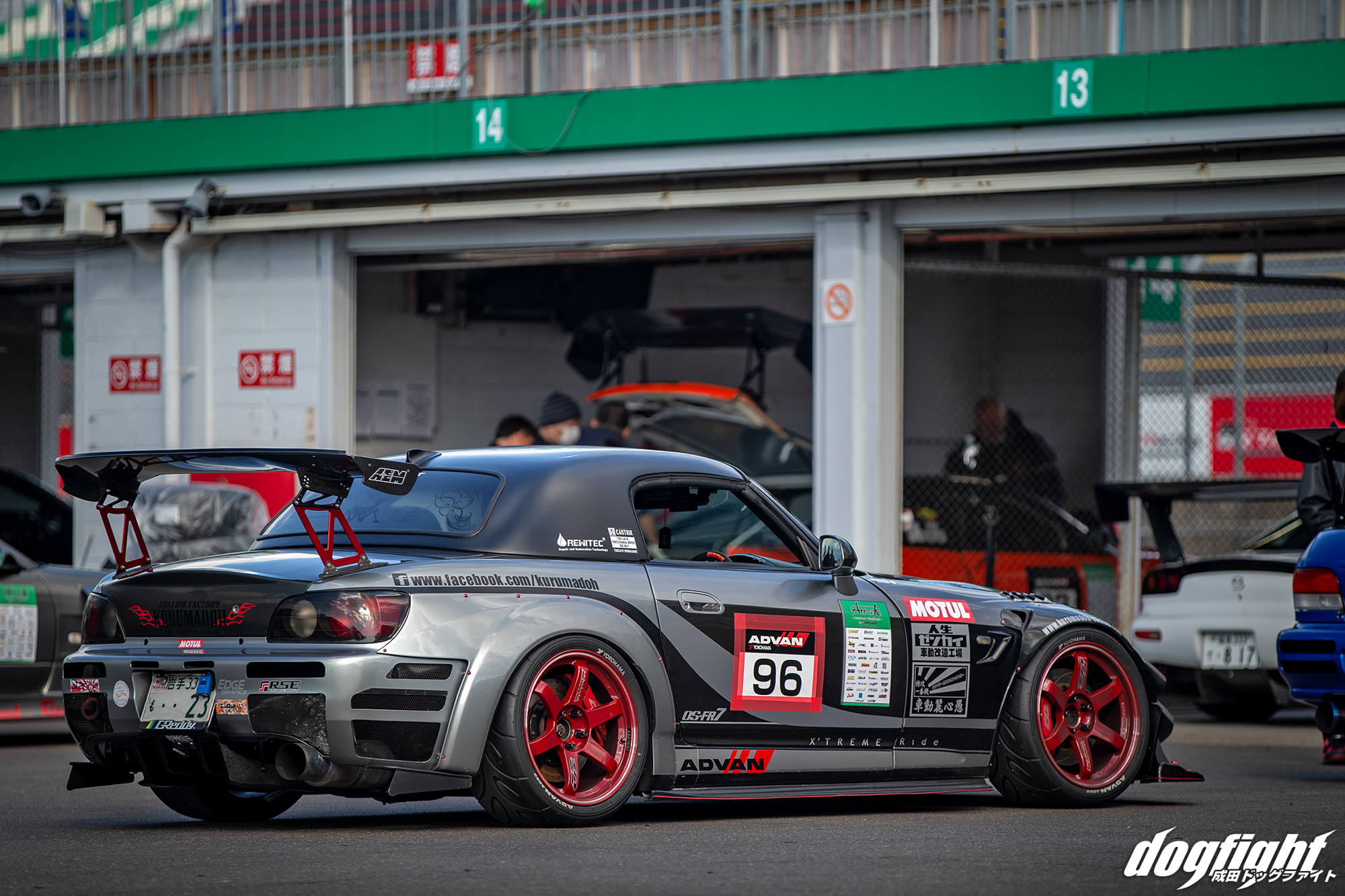 Even a knowledgeable automotive enthusiast would have a hard time identifying the parts on this car.  A Route KS front half-bumper is mated with a Kurumadoh original carbon front lip and canards.  Kurumadoh wide fenders in carbon allow the 18×10 +39 TE37s to fit the grippy 295 series Advan A050 up front.  The Kurumadoh carbon side strakes lead to the Spoon rear over fenders.  The carbon trunk houses a J’s Racing GT Wing to assist with both styling and downforce. 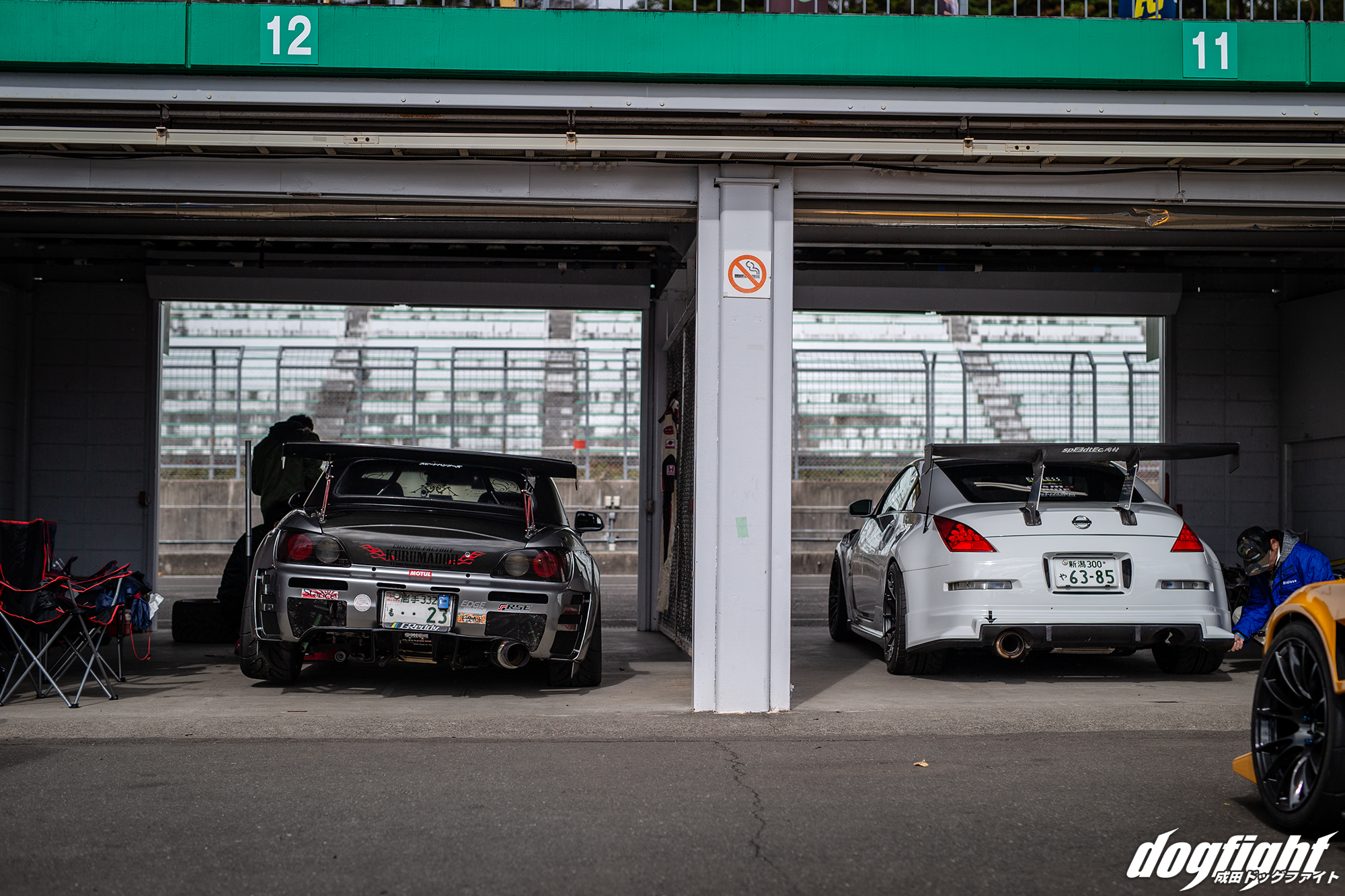 The car’s aggressiveness is amplified by some custom bumper cuts on the rear of the car, along with the originality of graphics and touches like the anodized red wing stays. 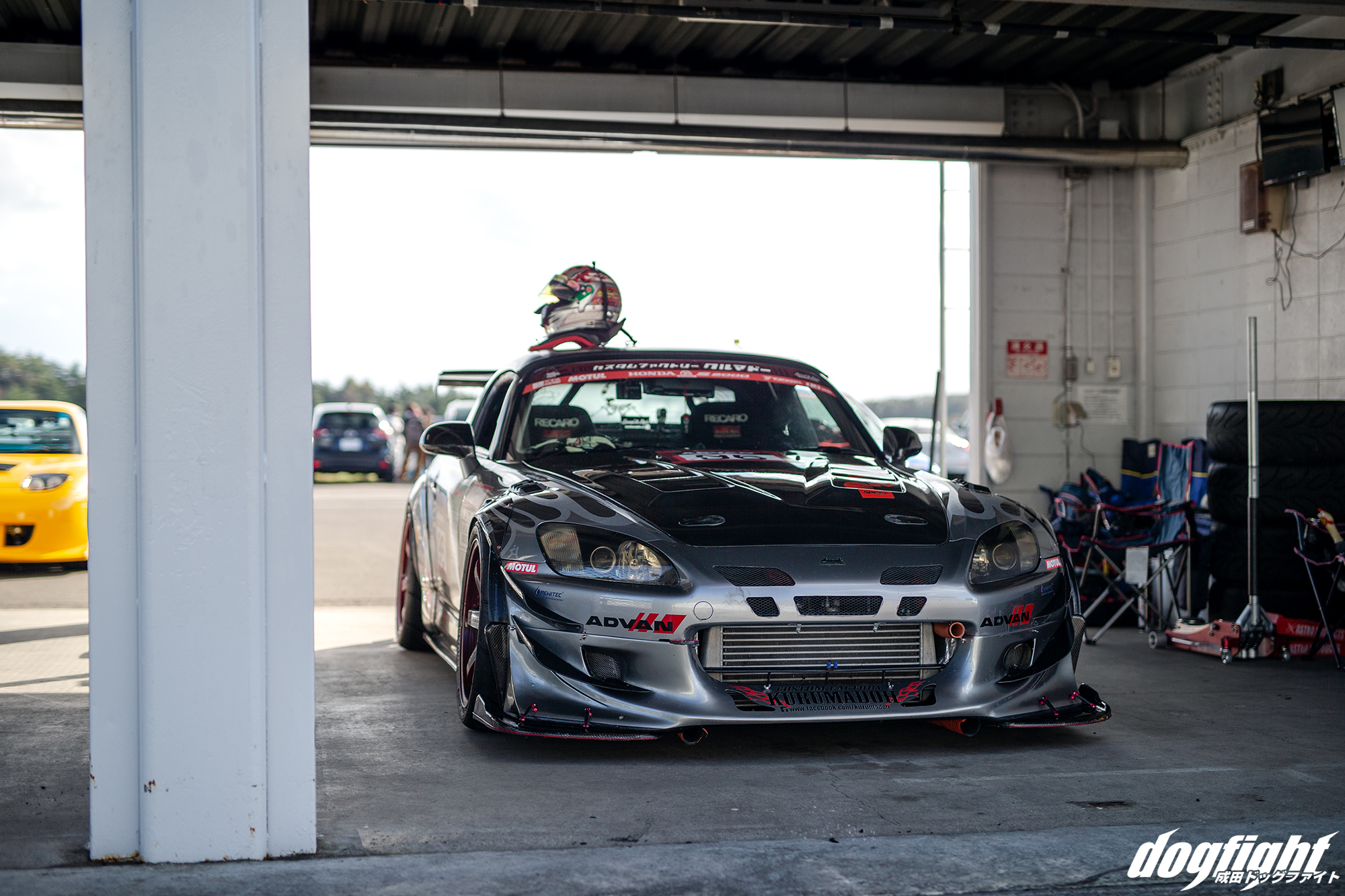 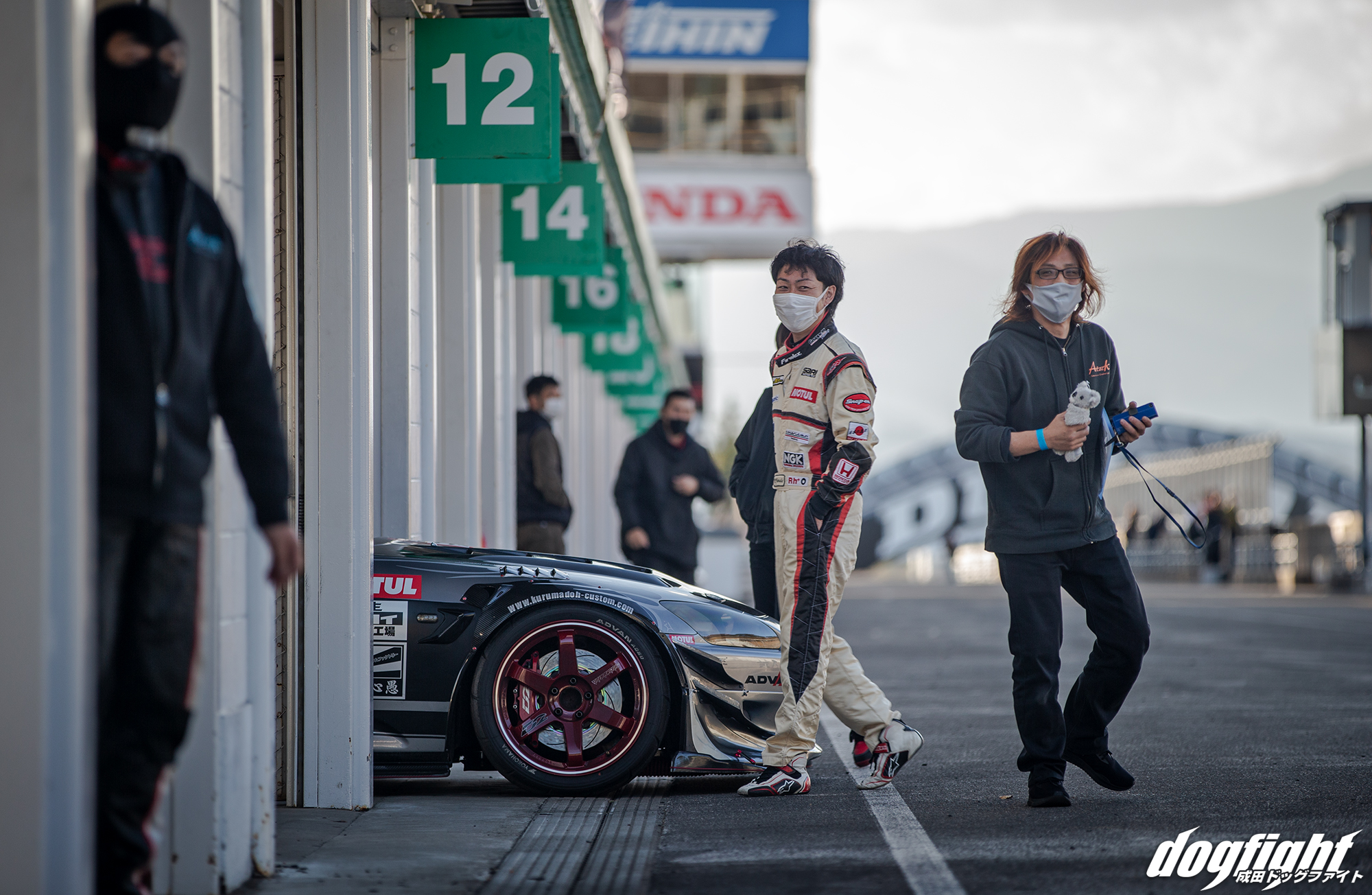 Yamada himself getting ready to hit the track. 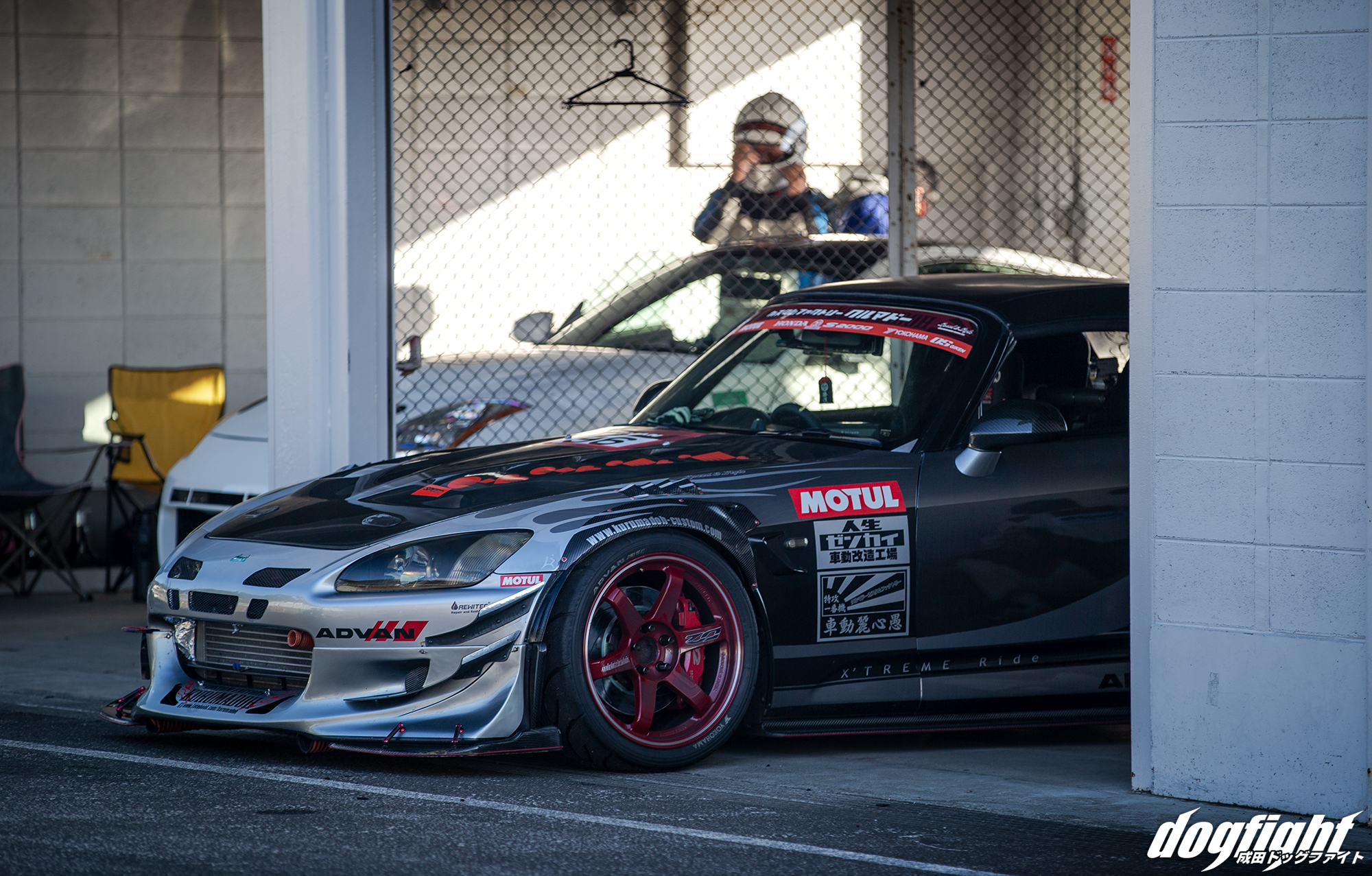 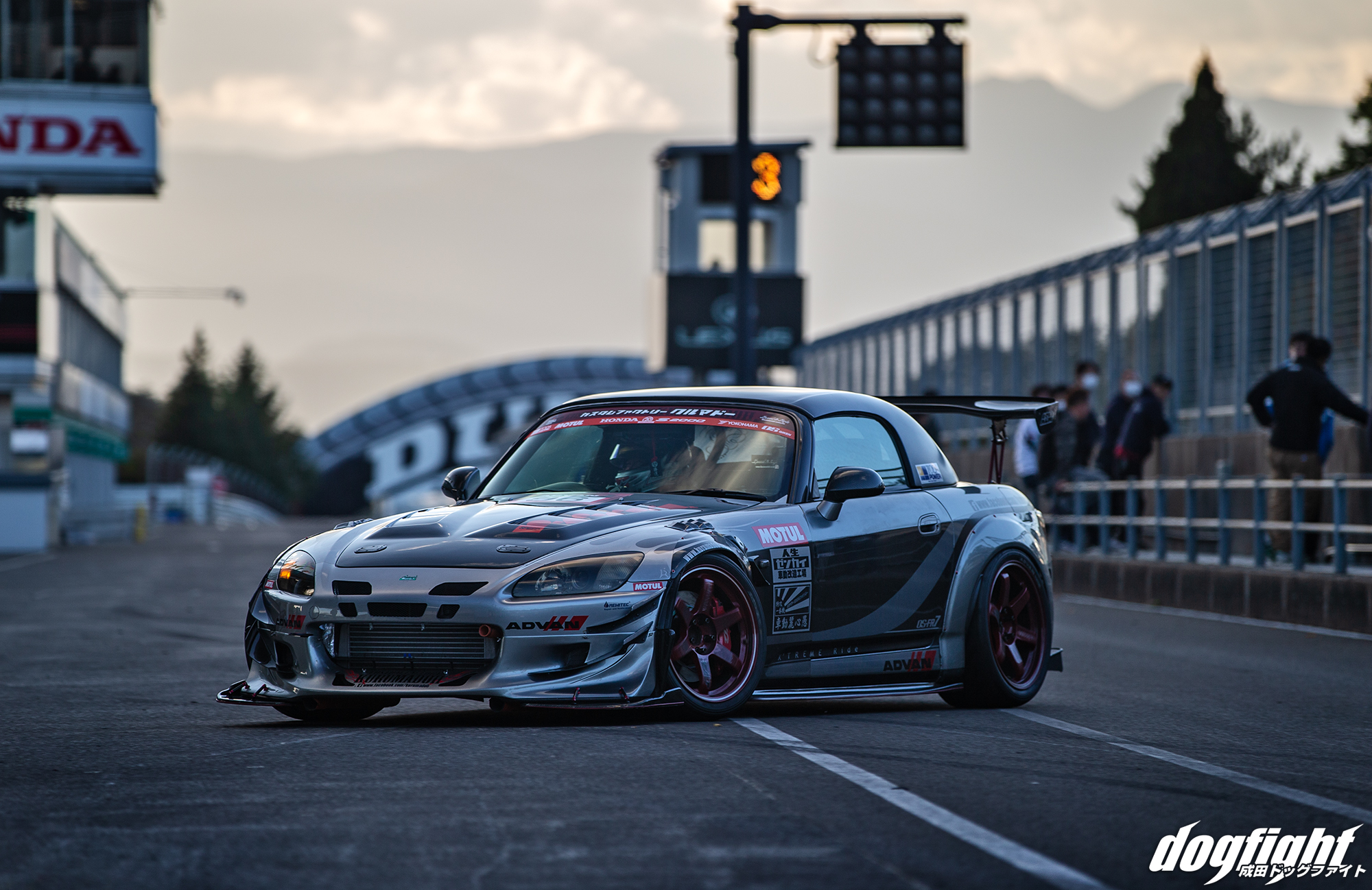 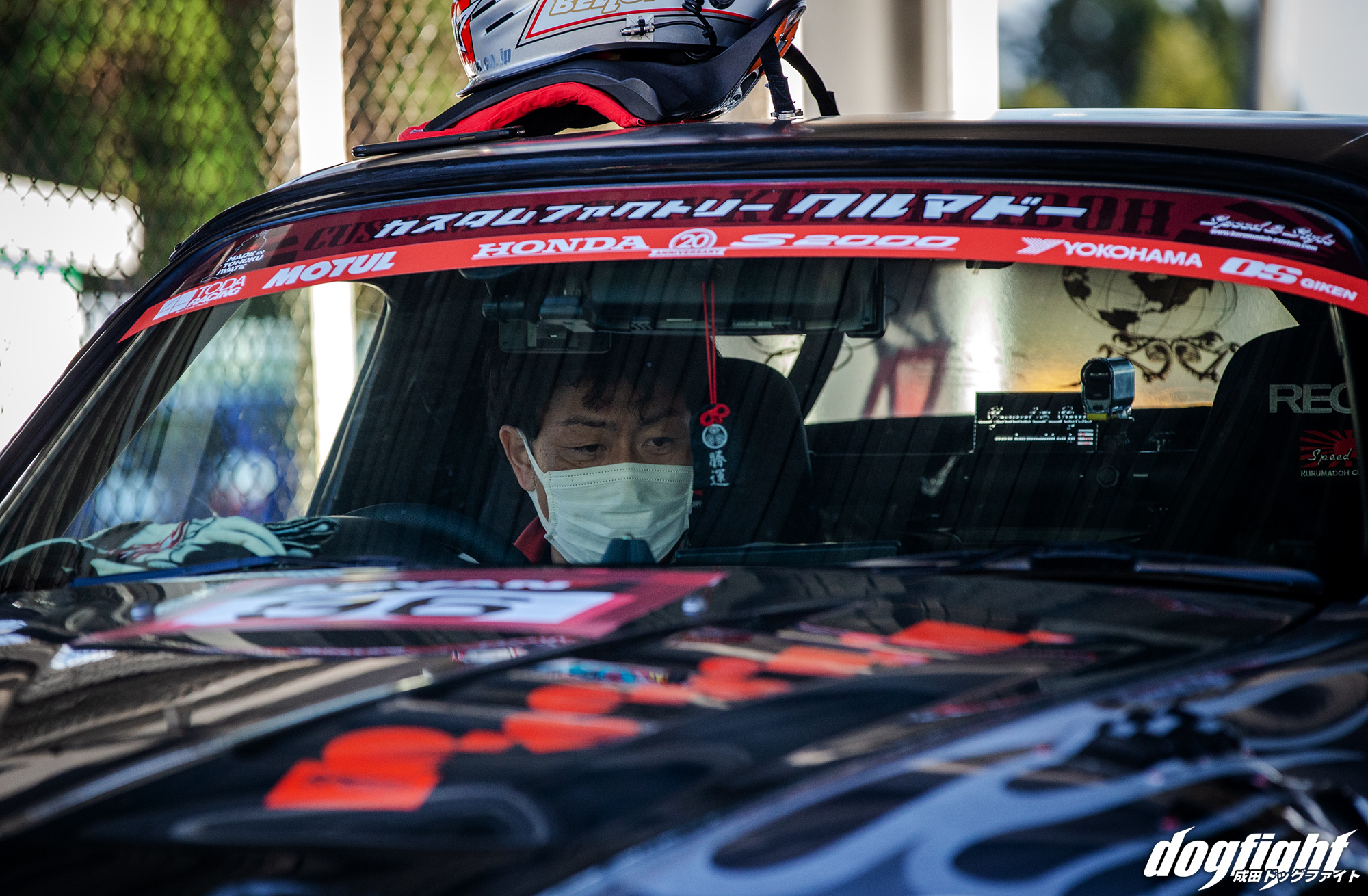 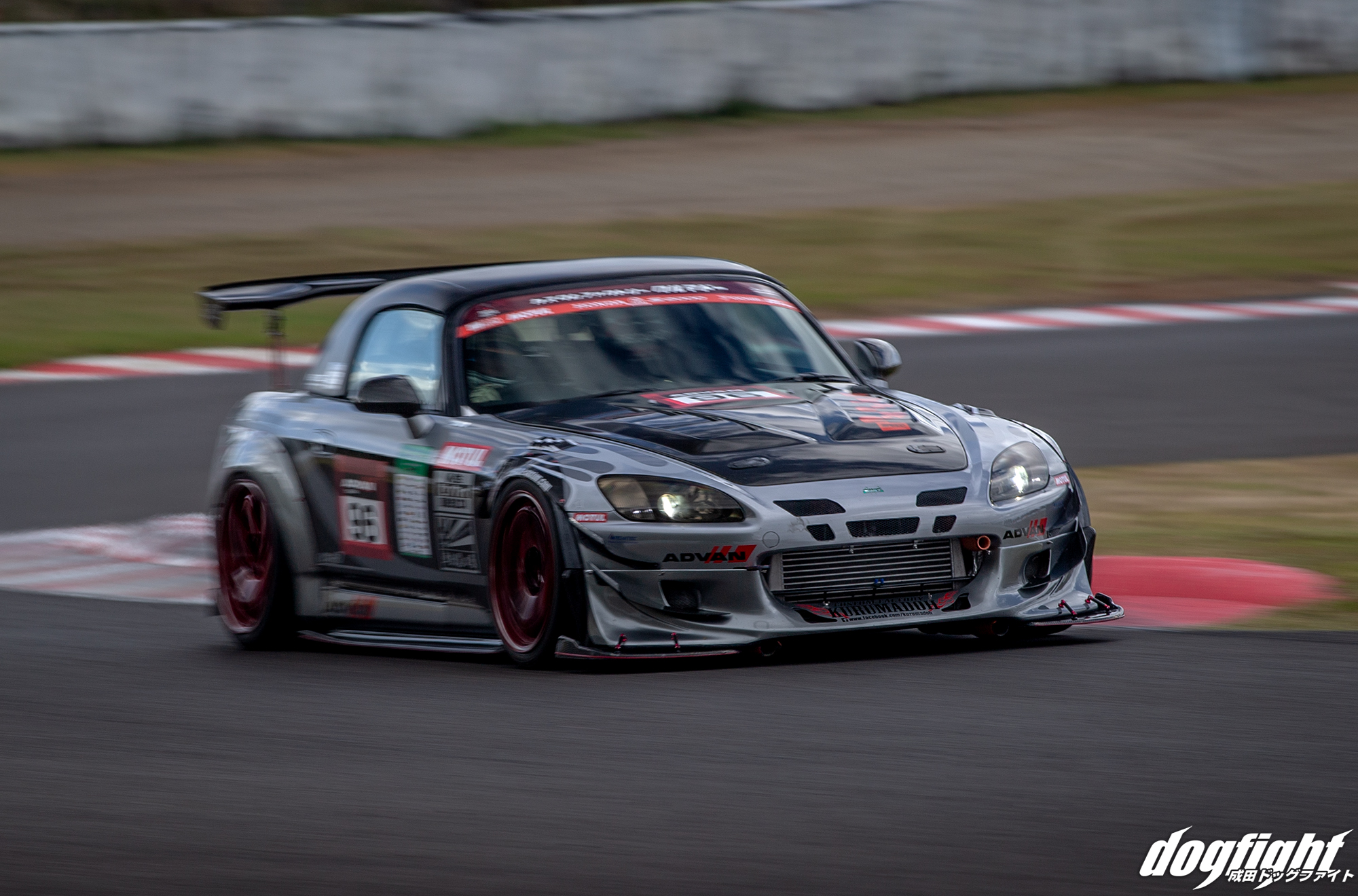 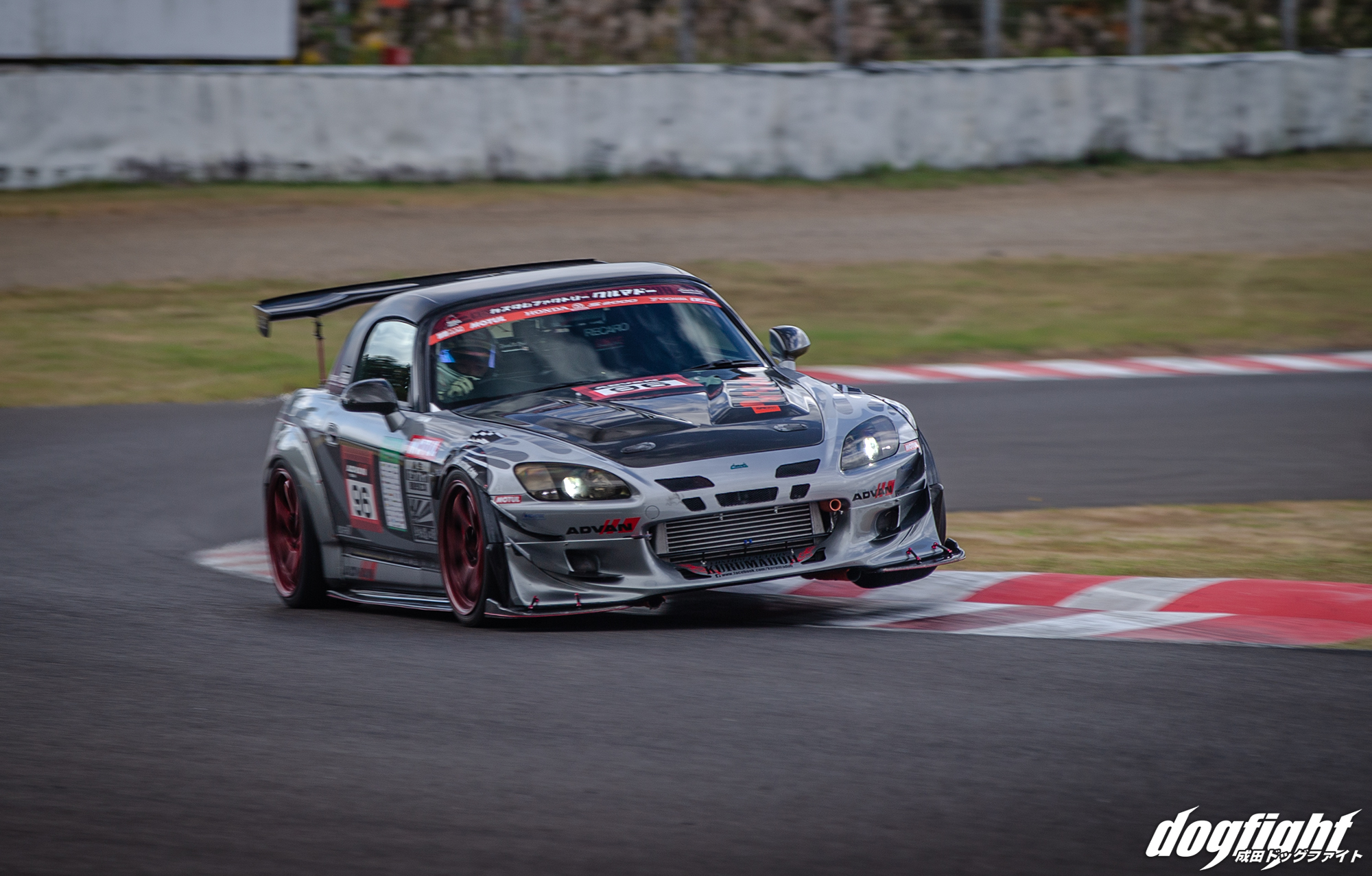 As aggressive as this car would look driving around town, it looks right at home on track.  Really cool to see way out in Miyagi at Sugo, but one that I hope to see again soon.