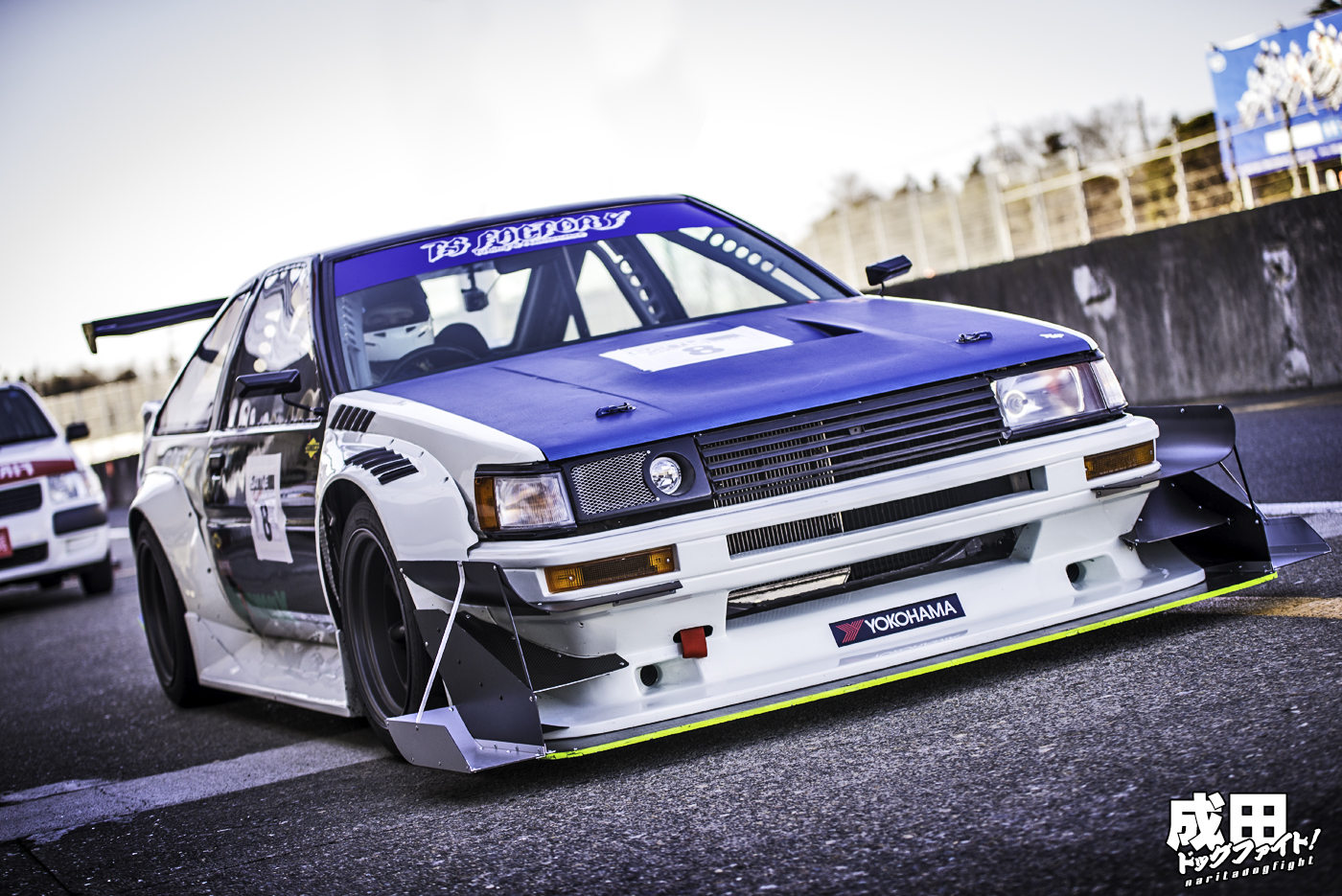 上杉 治憲 (Uesugi Harunori), a Japanese Daimyo of the Azizuki clan, king of samurai, was quoted as once saying, “なせばなる”; in English, “If you take action, it will become.”  It’s an excerpt taken from a poem written by Harunori himself in the Edo period:

‘If you try, you may succeed.
If you do not try, you will not succeed. This is true of all things.
Not succeeding is the result of not trying.’

Not many people achieve great things; but you’ll never know if you’re among them if you don’t try.  They say you never finish 100% of the things you don’t start – and rightly so. For some, it’s often not a lack of will, but a lack of focus.  Nothing to concentrate their resolve to, or to jump headfirst into.  This is quite the opposite for Tomoki-san though… For 25 years Suwa Tomoki has been completely taken by the Corolla 86.  At the impressionable age of 20, Tomoki-san remembers seeing the drifting taking place at Shinkiba and being totally captured by the performance of the 86.  Of all the cars he saw; the Supra, Skyline, FC, the S13…the 86 stood out to him as being the fastest in drift.  So, in an almost predictable Japanese fashion, he purchased his first Corolla very soon after and dove head first into the immense world of the 86. For the past 20 years, Tomoki has been driving, building, working on, and racing his 86’s.  After owning more than 15 of them, he has come to collectively pool all of his knowledge into the car you see here.  Long before Battle Evome, long before Attack, there existed a series of timed, one make races known as Cashew.  Beginning nearly 14 years ago, Tomoki competed in this series of racing in his various 86’s;  along side him, Takumi Iwata of Garage Work fame – for the 7 years in this series, he has tried to one-up his now good friend Iwata.  You couldn’t script a better dogfight; NA EG6 vs. NA 86…Both master’s of their machines, it’s as if the battle was decided long before they met.

As Cashew faded, Tomoki competed in Hot Version N2 races, and Procrews events honing his skills, all with one goal in mind; to break the one-minute barrier at Tsukuba’s TC2000 and to catch up to his now rival Iwata-san.  A goal that he’s since achieved, and then some.

With a personal best of 58.254 seconds at TC2000, he not only destroyed his goal of breaking the one minute mark, but he is a blink of an eye away from matching Iwata-san’s speed (Iwata ran a 58.13 at the Attack event earlier this year). It’s been a long journey to get there though.  The result of that journey, is what you see before you. …A collaboration of Tomoki’s knowledge, and the skill of a good friend Hisada Shunichi; owner of T’s Factory.  One of the fastest AE86’s in existence.

Utilizing a circuit setup of 225/45-16 all around, this is an extremely well-balanced example of the type of potential that can be had of the AE86 without having to go overboard.  The results, in my opinion, speak for themselves. Taking a similar lightweight focused approach, Suwa is able to reduce the weight of the car to a mere 740 kilograms.  Again, extremely comparable to Iwata-san’s EG.  Not to overpower the chassis, the fully built, high revving 4AG has been bumped up to a respectable 209 horsepower.  About 30 shy of what Iwata’s EG is making. The car’s exterior has been riddled with aerodynamic pieces to help aid in maintaining grip around track, and creates a rather aggressive look as a by-product; quite the contrast to Suwa’s cheerful appearance.  They even park together ^^ On circuit though, the cheerfulness drops, and it’s 100% attack. Hard on the brakes and soft back onto the throttle headed into turn 4; the first of the hairpins. The glorious sound of the straight piped exhaust resonates around TC2000 as the engine tirelessly revs past the 9k mark, propelling Suwa around the course. Full concentration.  Unlike other motor sport, you cannot recover from a mistake in Attack.  One mis-shift, one missed apex, and your lap is destroyed. Get it right however, and the feeling is unmatchable. For now, the rivalry between the two friends will continue.  As Suwa inches ever closer to matching Iwata’s time, they both continue to develop their unique weapons; Suwa to close the gap, and Iwata to further himself as the NA champion of Tsukuba.  Great friendships sometimes make for the best competitions,  but either way you define the two, they are champions in their own right.  We owe much to people such as Tomoki for pushing the bounds of tuning in such a niche environment, and we can learn a lot from it.

I can’t wait to see what’s in store for the next season of Time Attack in Japan, and you can bet we’ll be on hand to follow it all. Like Harunori said, ‘You can’t succeed unless you try’, and there is no doubt that Suwa is giving it all he’s got.