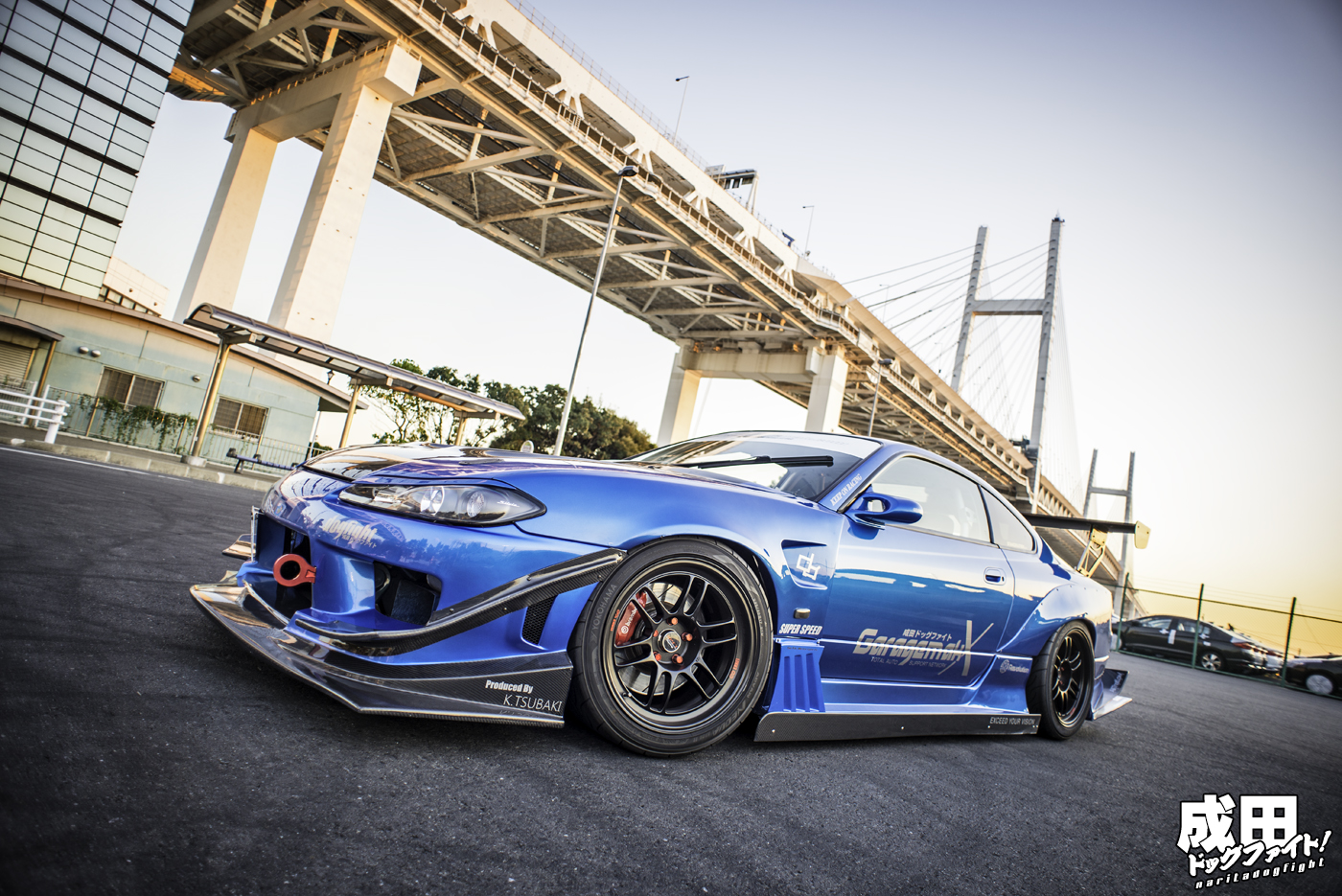 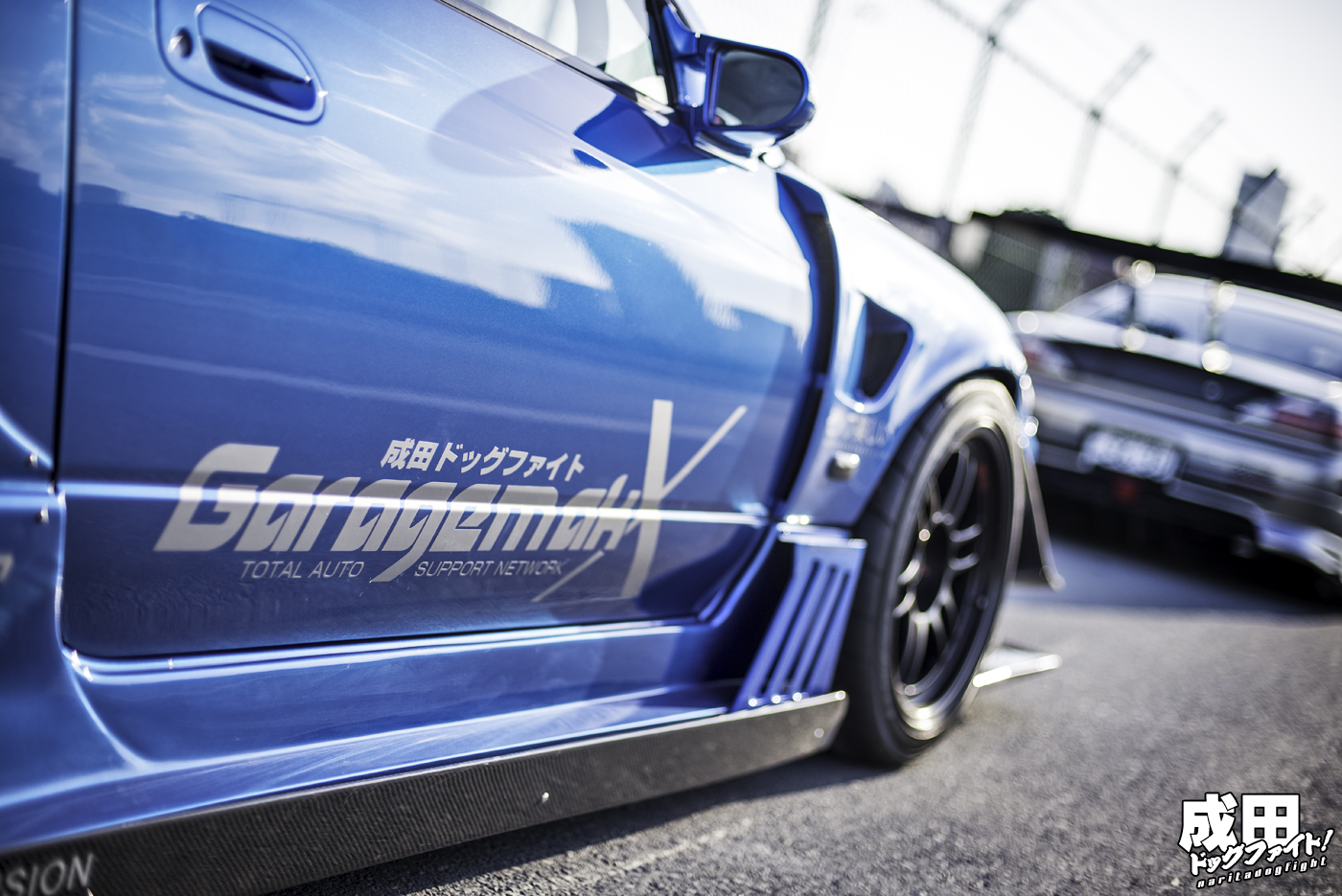 As you may or may not know, I work in the airline industry; and in my position I travel quite frequently.  Over the years I’ve come to not only enjoy flight in itself, but to appreciate it for what it does for us.  At any given point there are between 5 and 20 thousand airplanes in the skies (if you’re interested in how that’s possible, check out the NATS videos on You Tube) above, taking millions of people to destinations that, without flight, just would not be possible (or would take an incredible amount of time).  Just thinking of how each passenger has a unique story as to where their going, or what they’re traveling for, who they are going to go see, etc. makes me happy that commercial flight exists.  Sure, it can be a hassle sometimes with the security these days but just think of the alternative.  Flight, and airlines, provide a link to us that makes the world a much smaller place.  It let’s us achieve our visions, and provides us with a vast palette of destinations to explore; it is essentially a link to the world.

It is with this appreciation that I came up with the idea for the site’s ‘LINK’ Series.  Using cooperative, creative design, we highlight tuning shops throughout Japan, bringing them at times to the front of our media audience.  Using NDF as a communicative tool for others to see what they’ve created, that perhaps otherwise wouldn’t know of or have had the opportunity to do so.  I thought it would be a good idea, and I have a whole list of shops I’d like to partner with, but after talking to Tsubaki after HKS Day in January, I knew that Garage Mak would be the first.  What I didn’t know though, is how successful it was going to be, and that in the end I would end up with several people I can now happily call my friends. 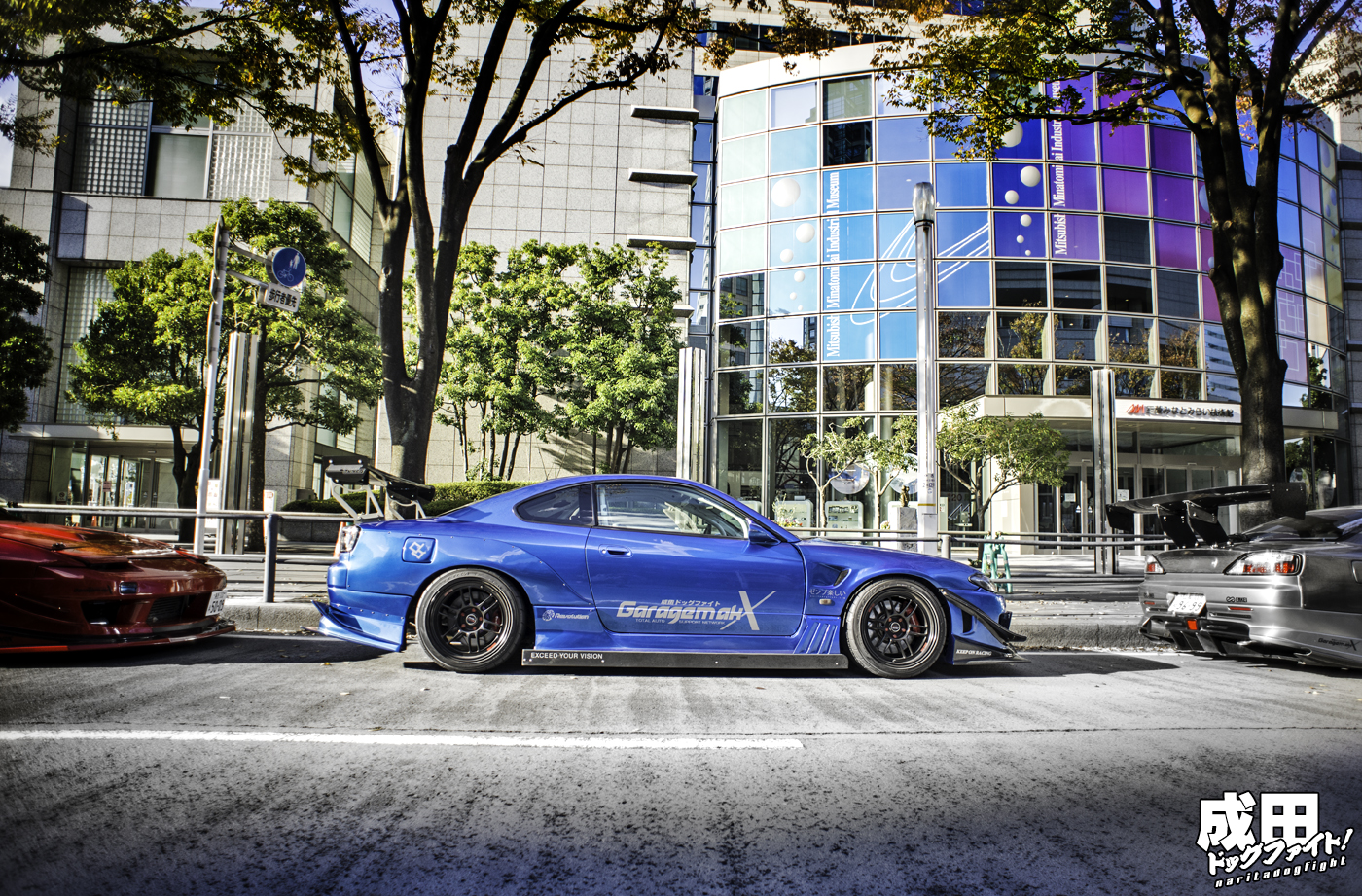 Garage Mak is, among other things, an automotive shop in Nagano that produces beautiful body kits and other aerodynamic bits (mainly for Nissans).  They also offer engine work and general tuning for a variety of cars; it’s basically a one-stop deal. Owned by the Miyagawa brothers (who are heavy into Jui Jitsu – *unrelated note), and promoted by the owners of the three shop cars that are very well known by now due to the completeness of their builds.  They are without a doubt, however, most notably known for their pair of S15 demo cars; the Blue Shark and the Grey Shark.  Earlier in the year I had the privilege  of photographing Baki’s car for Import Tuner (if you haven’t seen it, you can read it here).

During that shoot, we got to talk about some things.  I learned quite a bit about Garage Mak, but more importantly I got to know Baki.  We kept in contact after the article of course, and when I introduced the idea of a collaboration with Garage Mak through the LINK series he was very excited and helped out quite a bit.  We both enjoy simplistic styling, so the combination of logo-ways for the series was quite painless.   The launch of the collaboration was well accepted, except for one thing; I wasn’t able to make the trip to Nagano due to weather issues.  Fortunately, Baki had some good news for me. 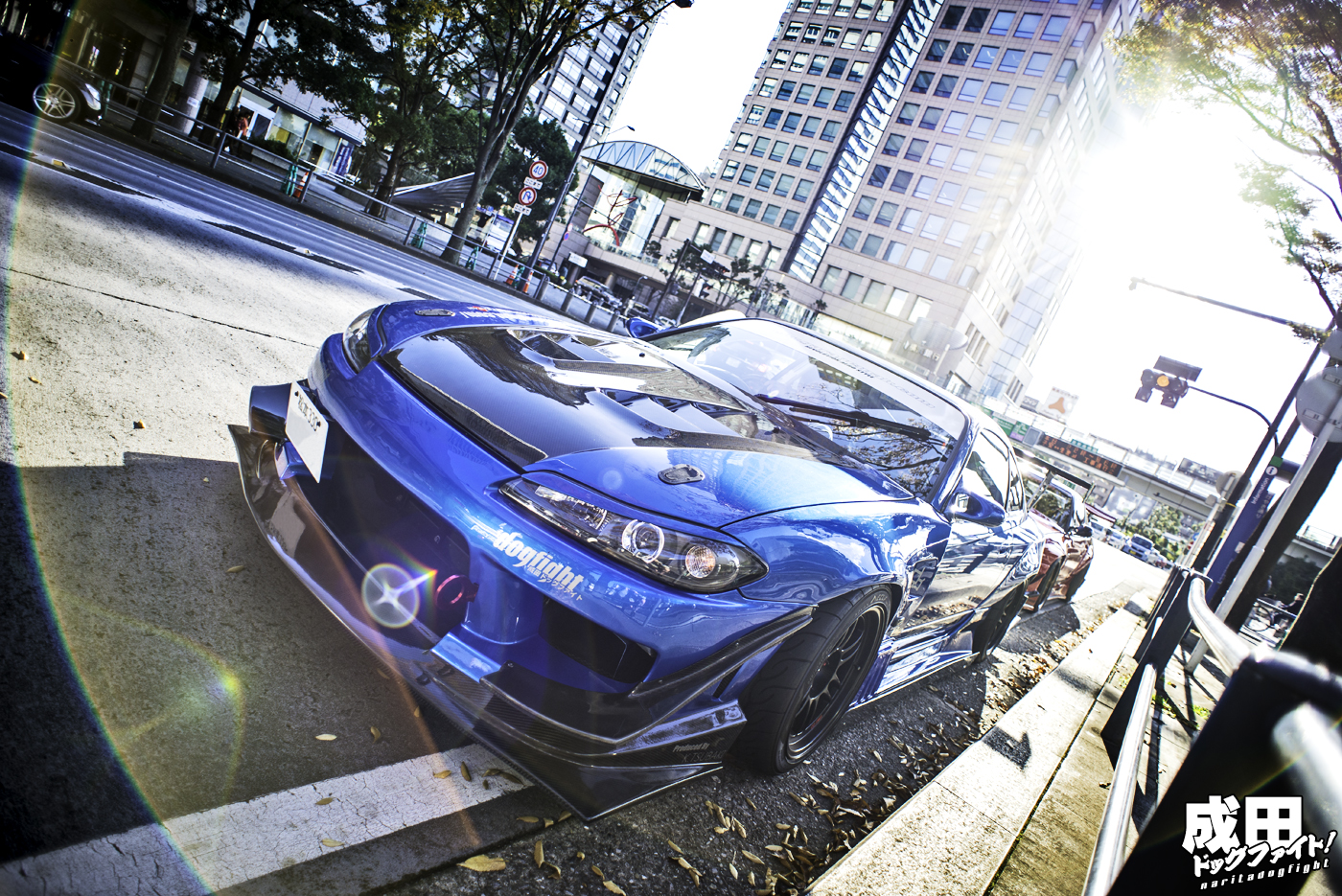 He would, along with Ame and Seki, be making the drive to Umihotaru to attend the 2nd NDF Winter Cafe.  I was both surprised and grateful, as Nagano is quite a ways away from the Tokyo area.  To top it off, he said he wanted to work with me to make his car into the NDF demo car for the event.  We both decided that using the LINK design would be really cool, and what you see in this post is the result. 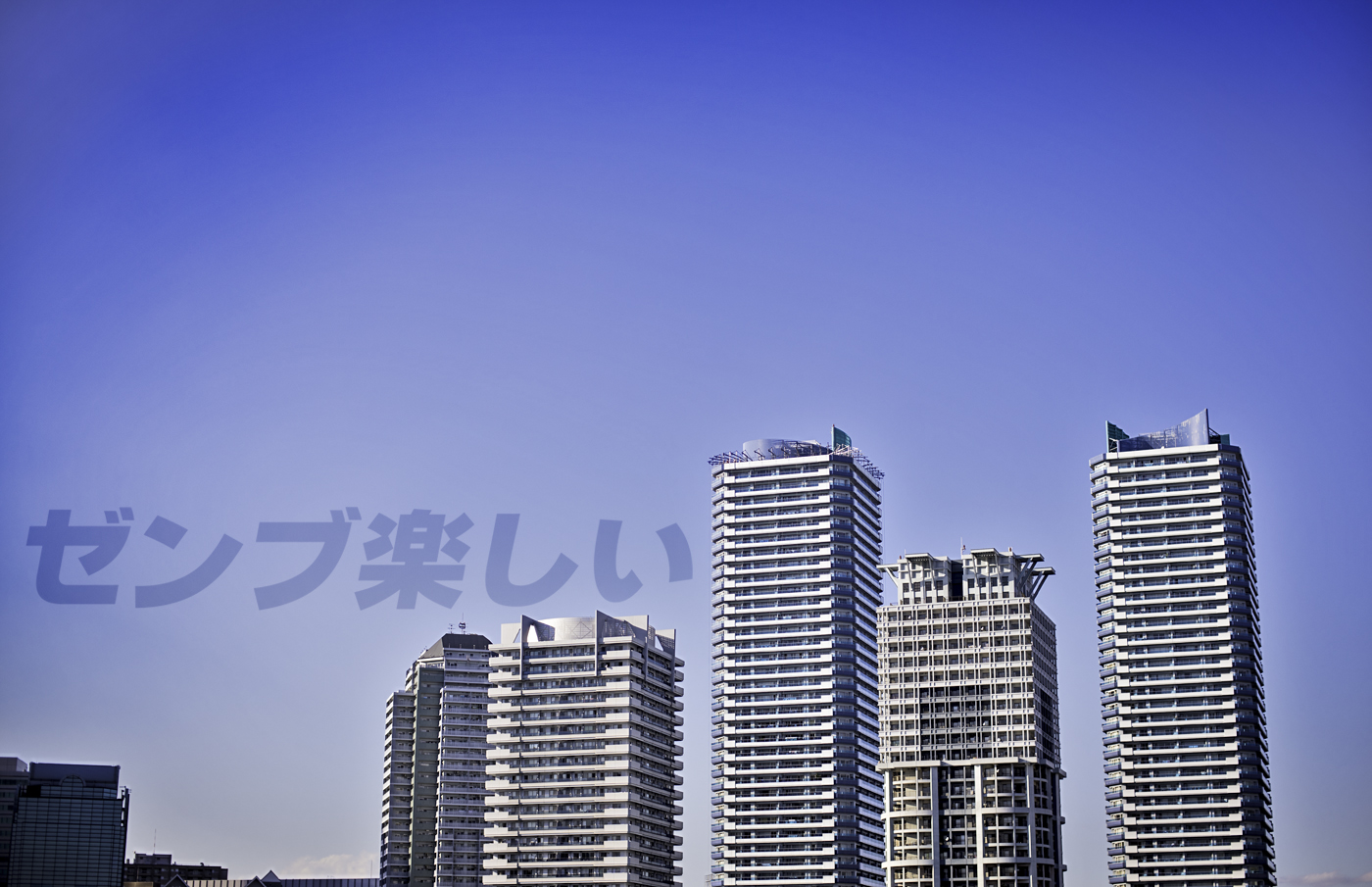 The day was very kind to us and the skies were blue the entire afternoon. 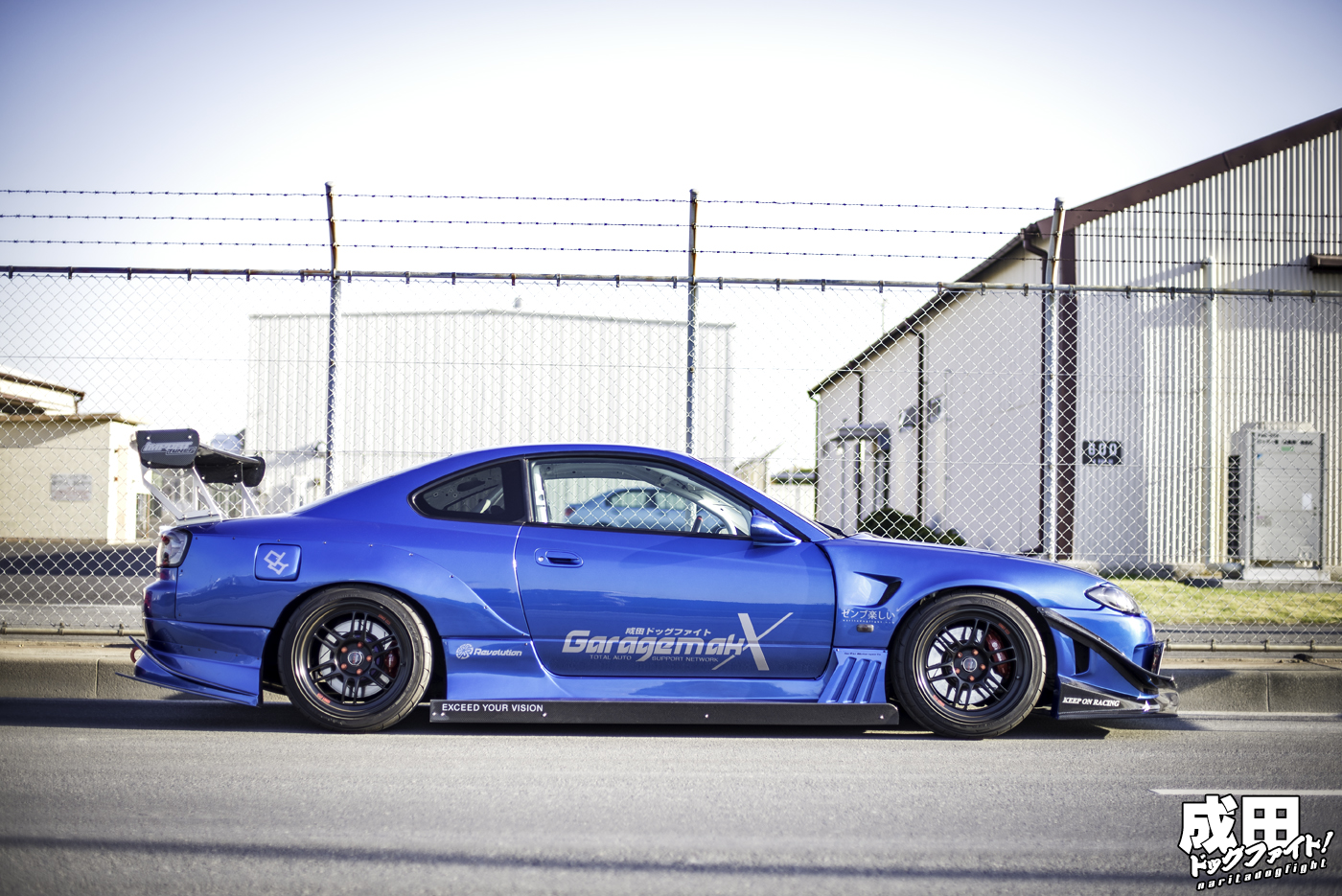 So, the day of the Cafe, we went around to our favorite photo locations (some are Sekinei’s secret spots), and were able to get some exclusive shots of the Garage Mak trio.  I decided against making one post with all three cars, as I want to highlight the uniqueness of each.  For example, Baki’s car is stripped interior, more of a race inspired build, where as Ame’s S15 is more or less street style, and Seki’s S13 is…well, I can’t even pin that car; he drifts it quite often though.

So, to kick off this series of posts, I wanted to start with Baki’s S15. 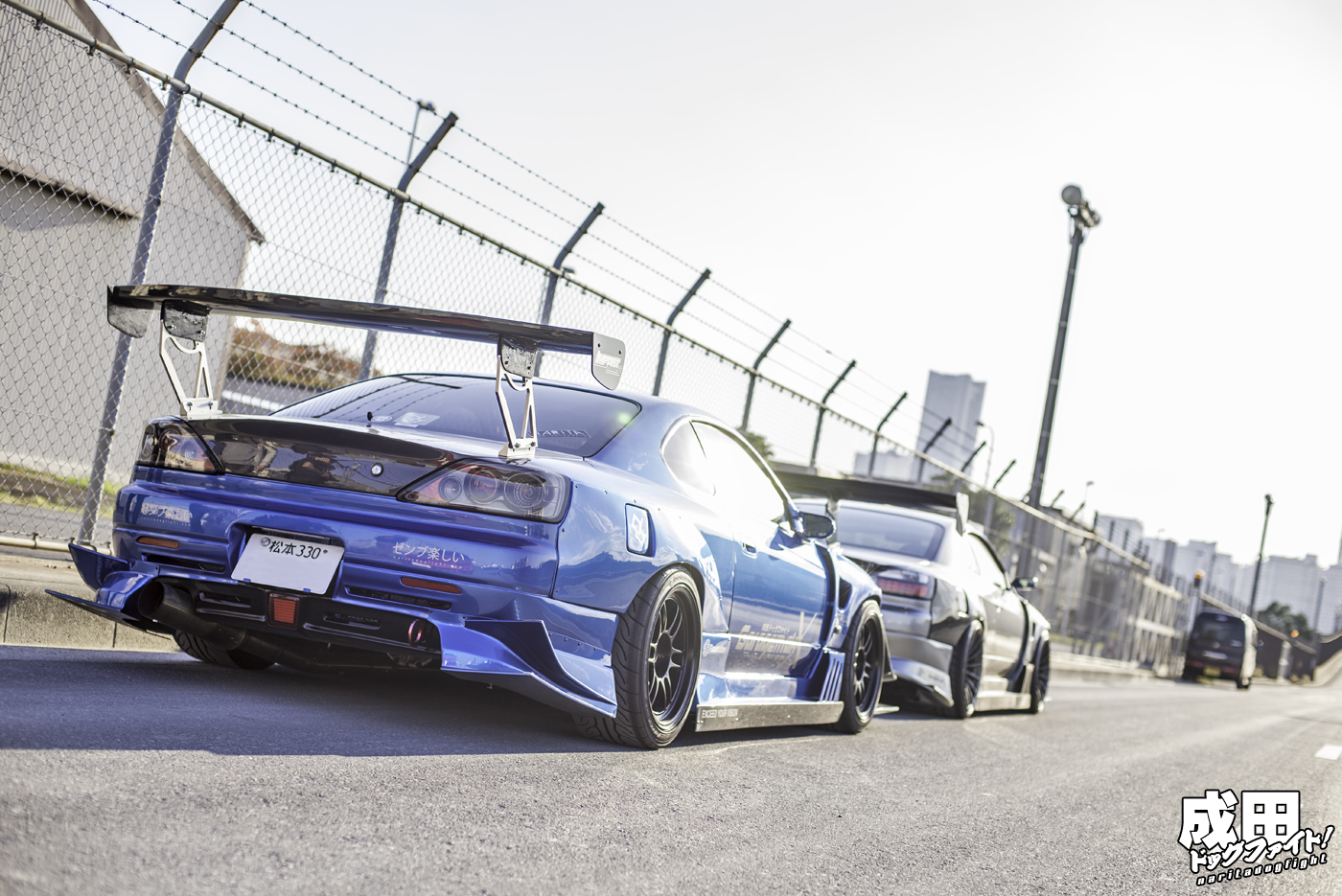 The Garage Mak rear canards on the S15 even out the aggressiveness of the front end.  This piece isn’t offered anymore, but is quite similar to the S13 rear canard. 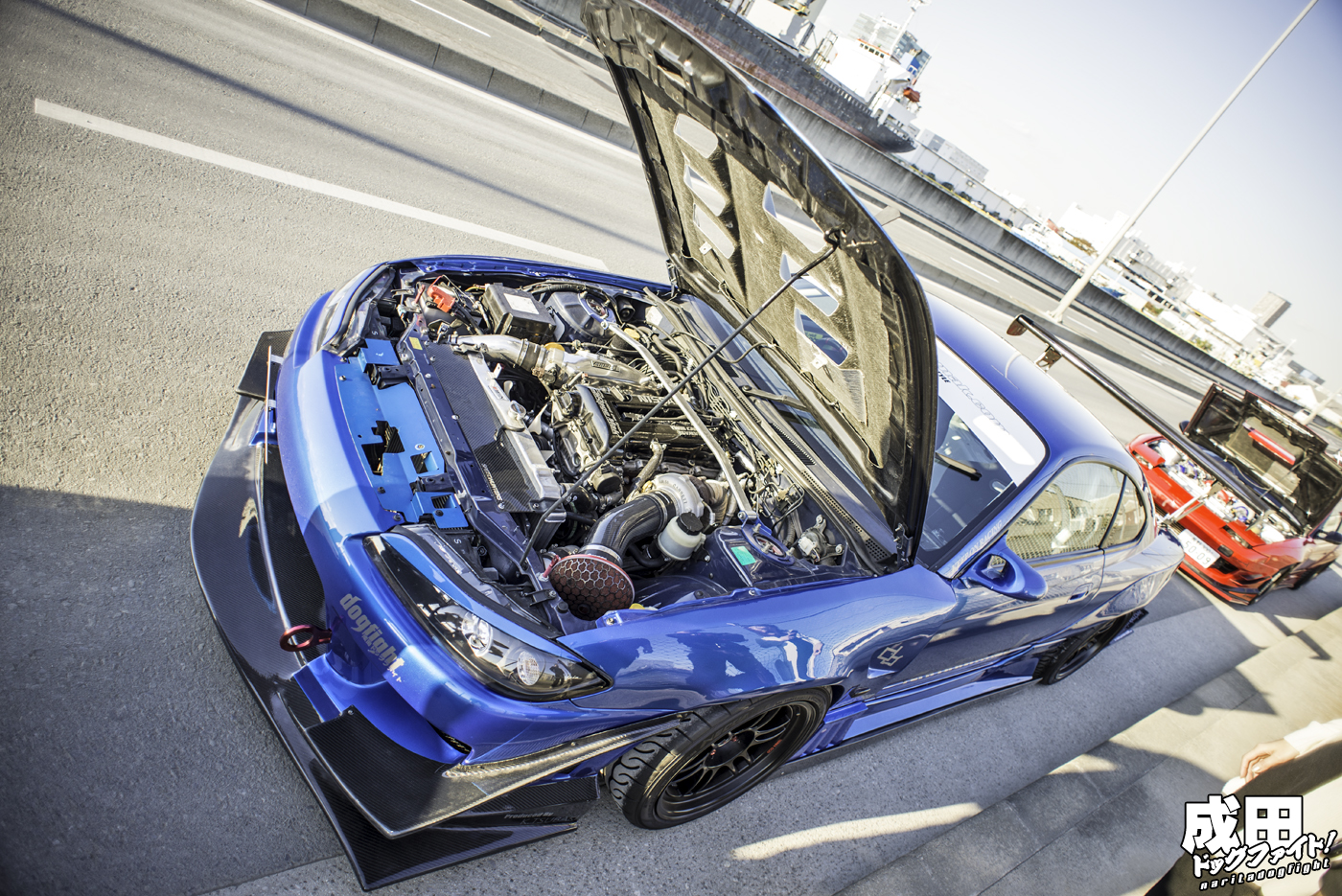 Just shy of 500 horespower, the GT2835R equipped SR20 leaves nothing more to be wanted in the power department.  In actuality, this is quite tame in the world of Garage Mak; where SR’s are typically tuned in upwards of 6-700 horsepower. 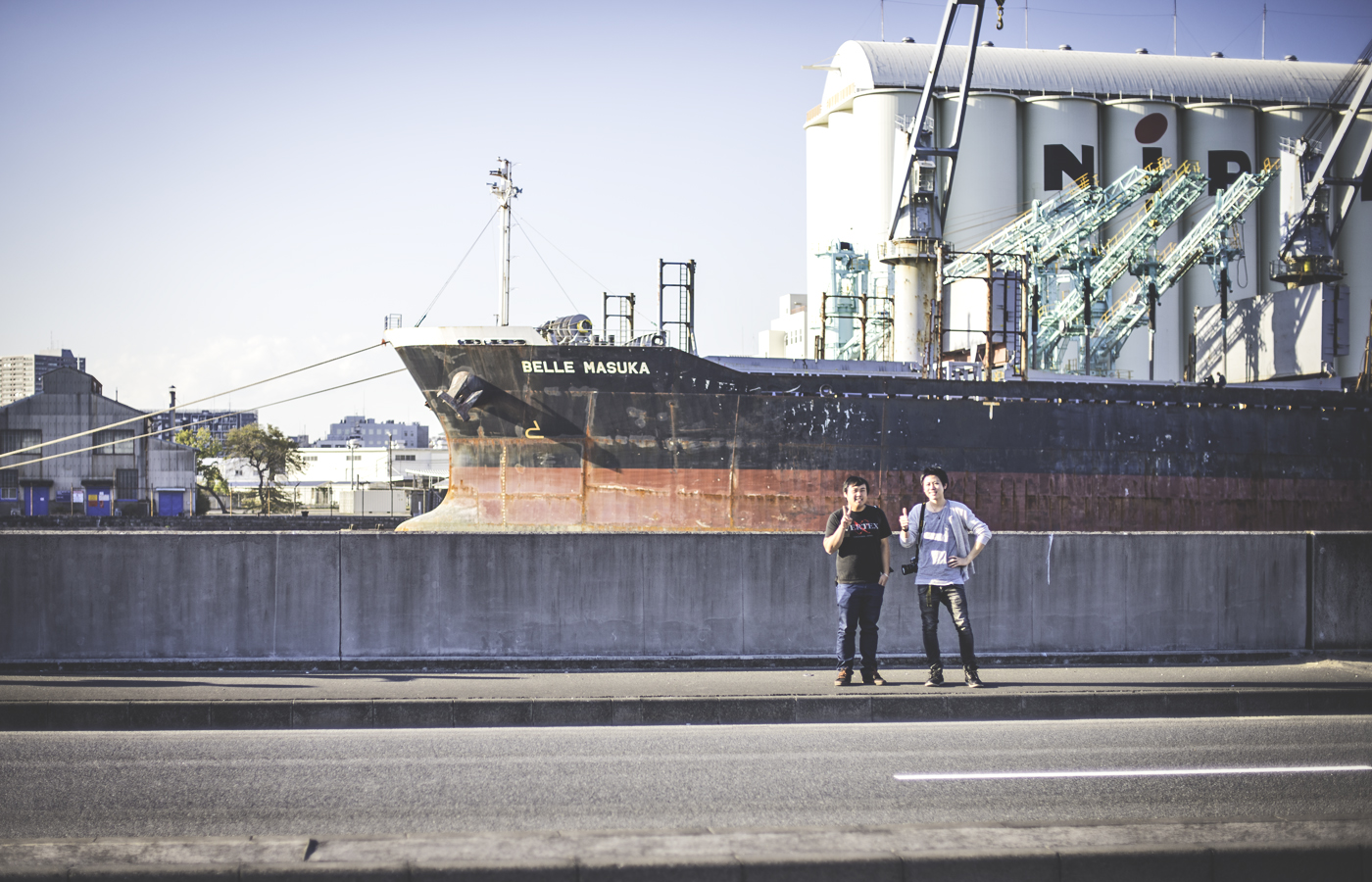 Jay and Baki hanging out in front of the Belle Masuka…which, obviously, is a large vessel. 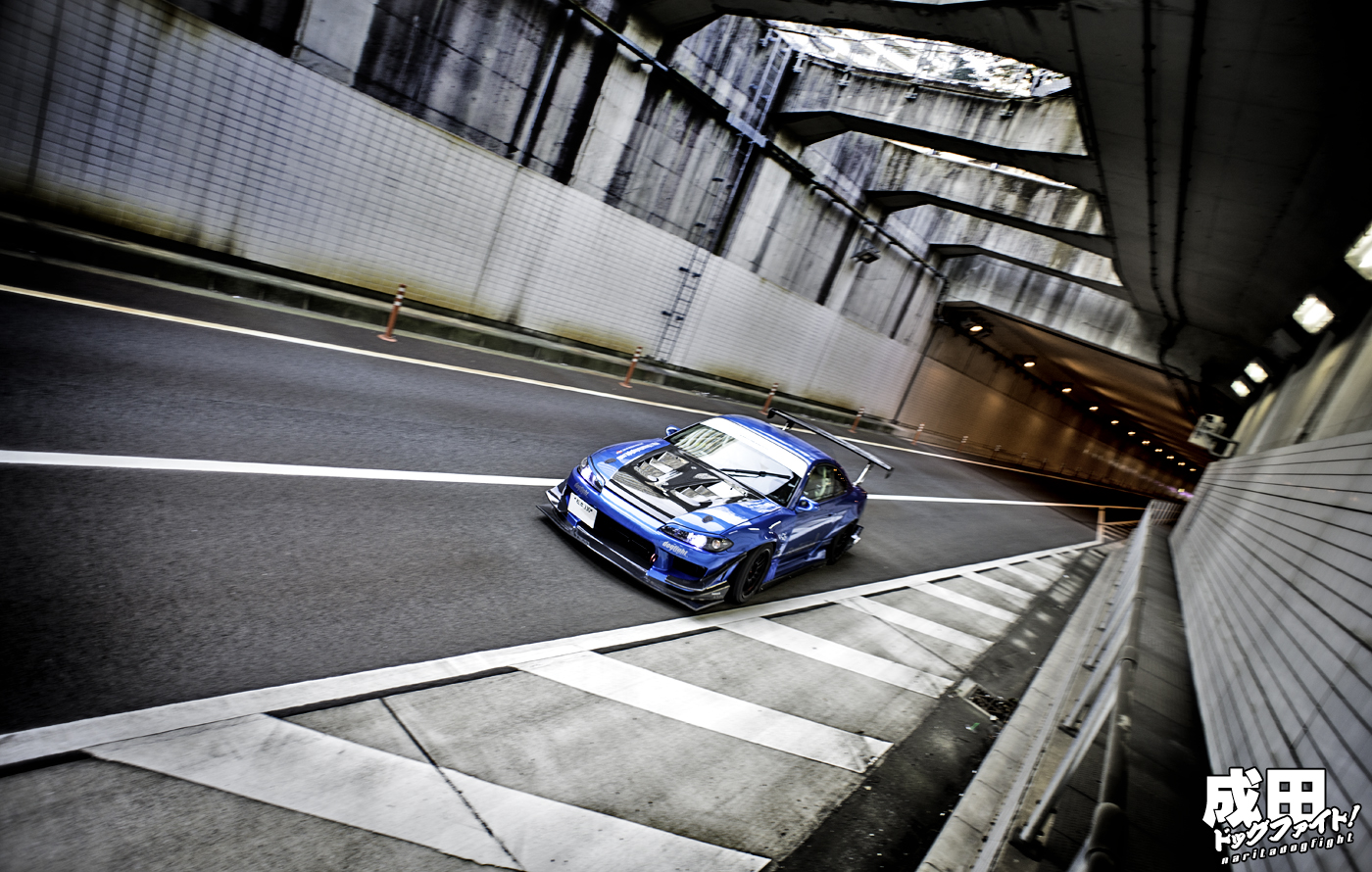 Moving onto spot number 2, which we also used for part of the IT shoot, is a favorite of mine…but maybe not really allowed haha. 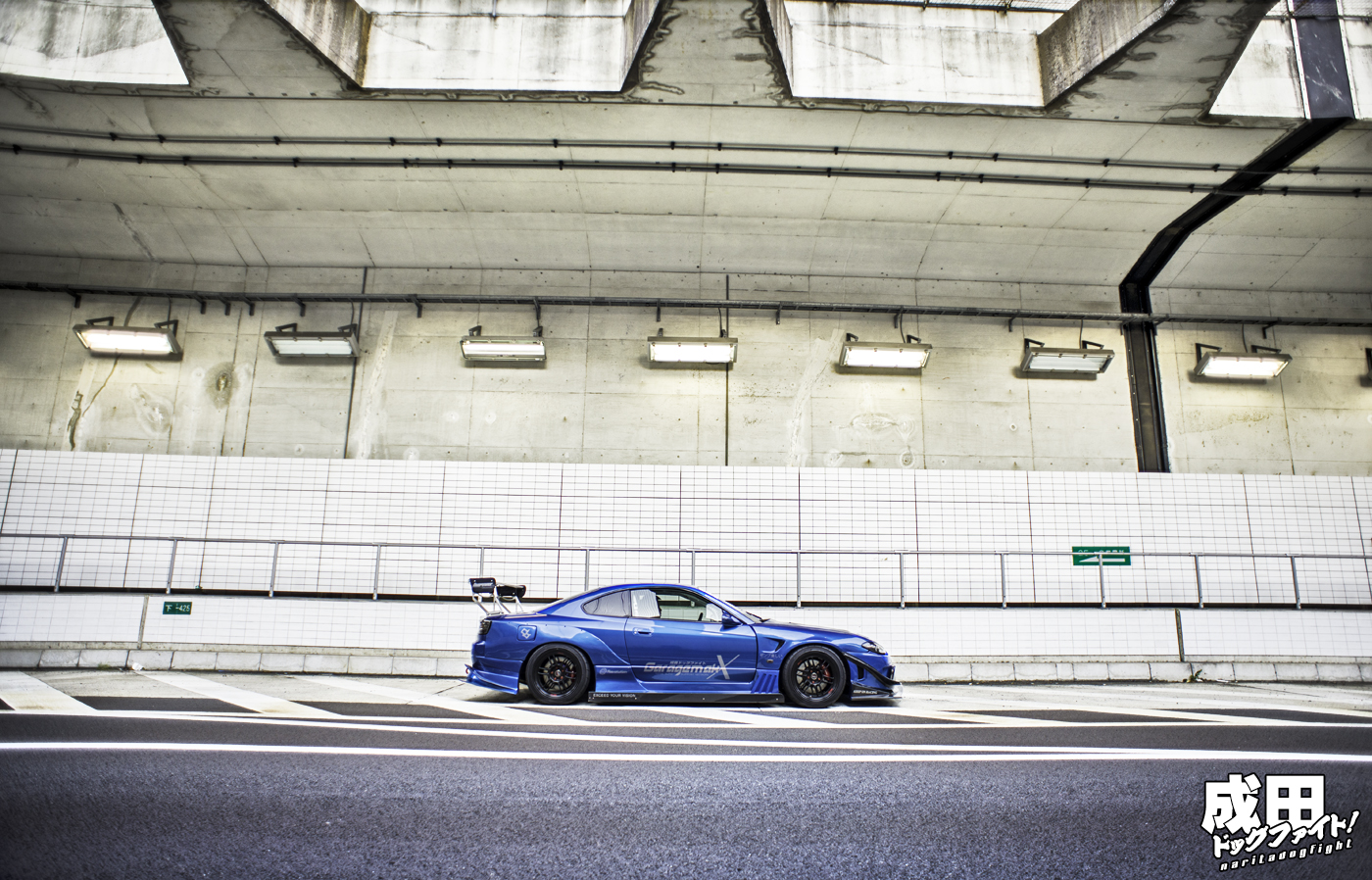 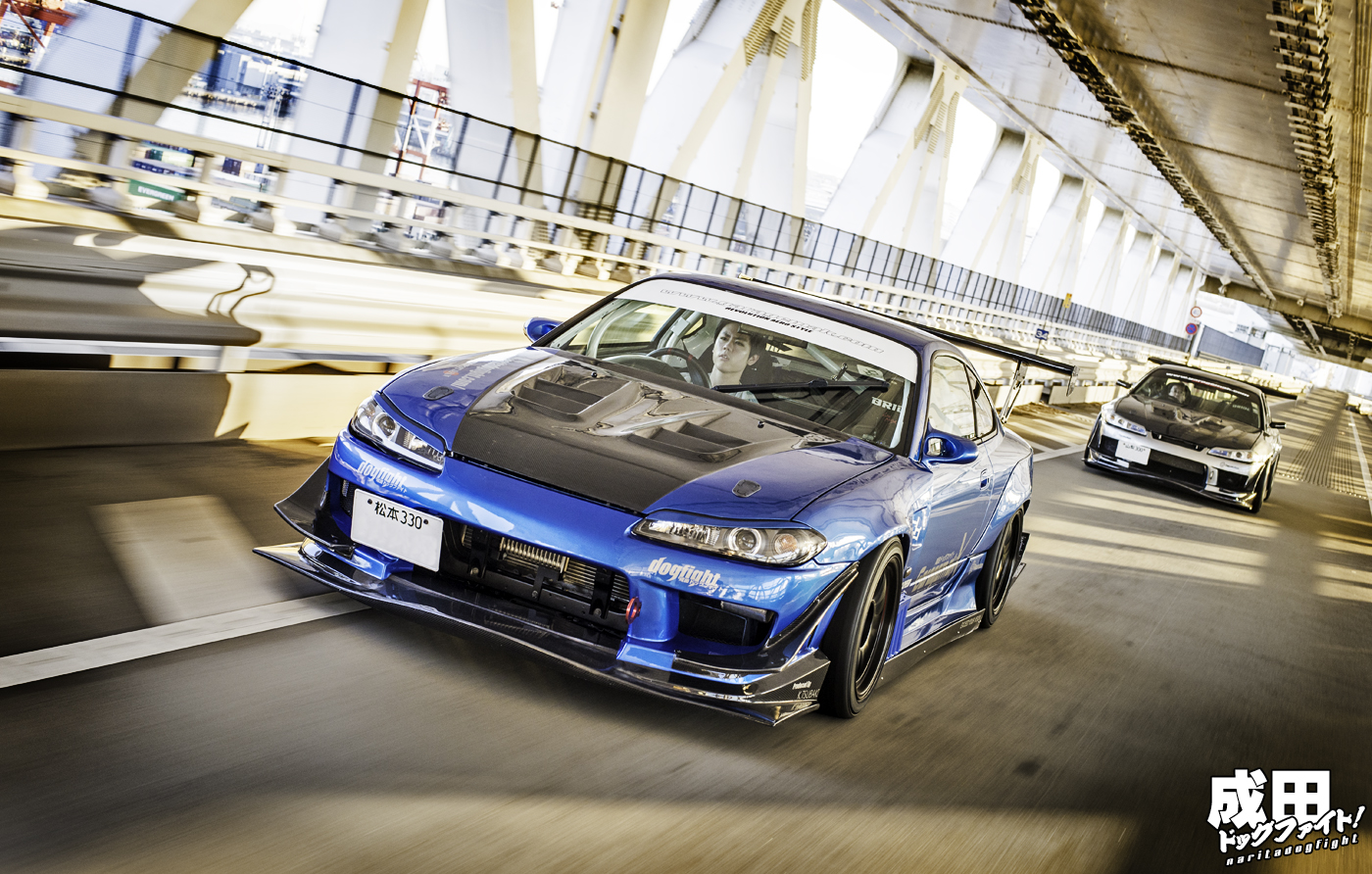 Head out the window underneath the Yokohama Bay Bridge for some rollers. 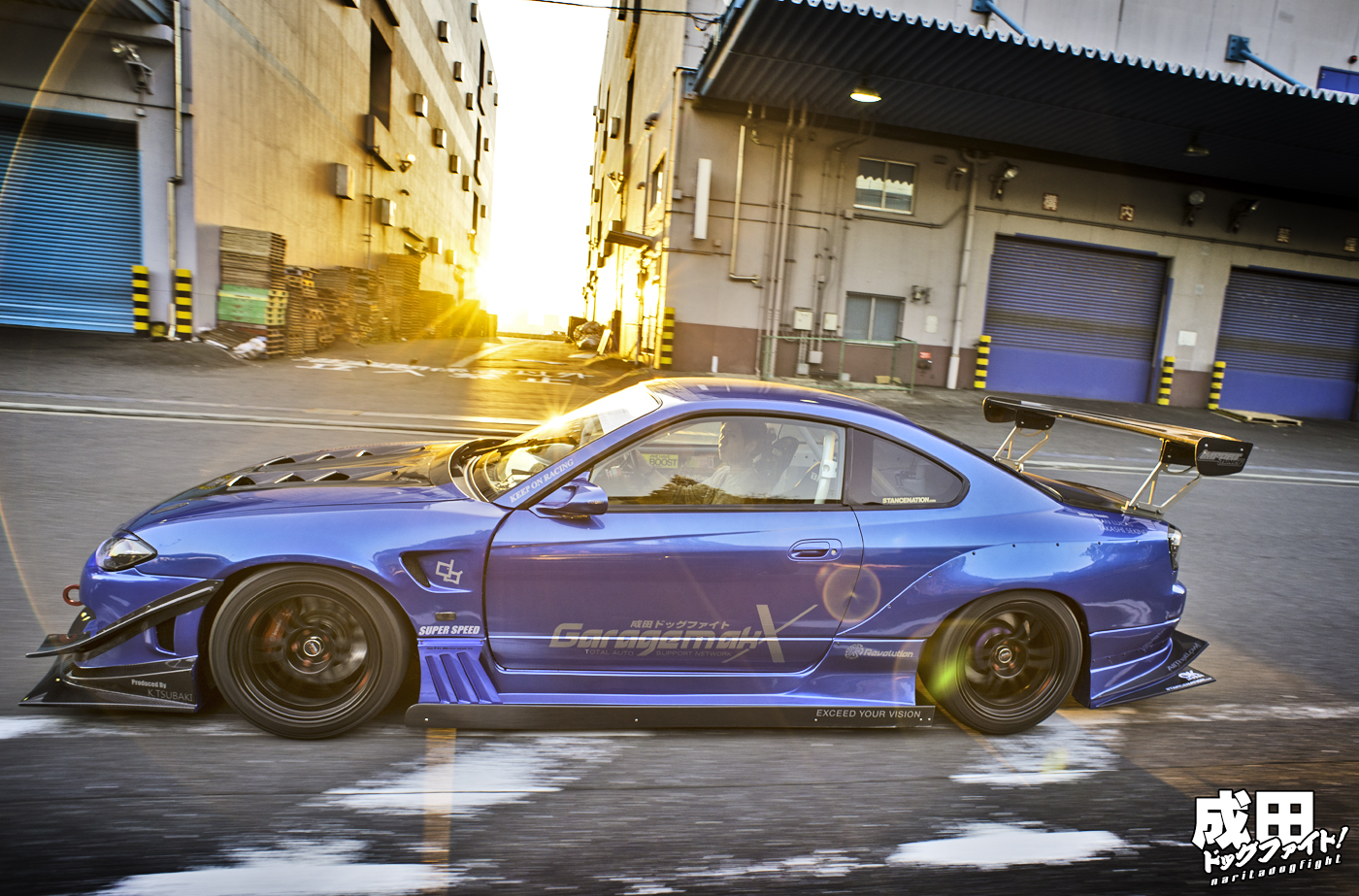 Golden hour was upon us, so we headed out to the one spot I was really looking forward to shooting in. 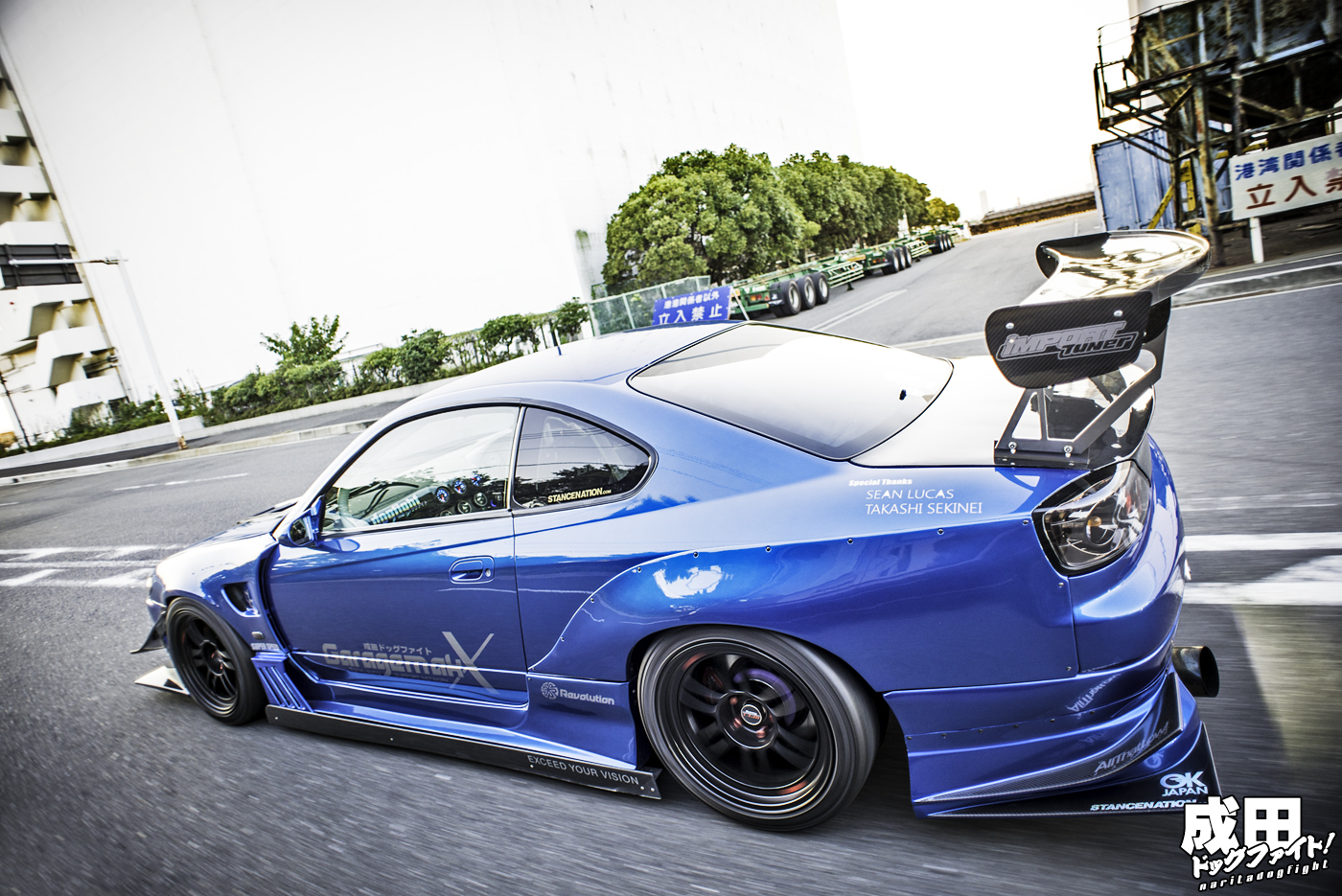 The overall S15 packages offered by Garage Mak are among the best.  So aesthetically pleasing they’re more like an art piece than a car part. 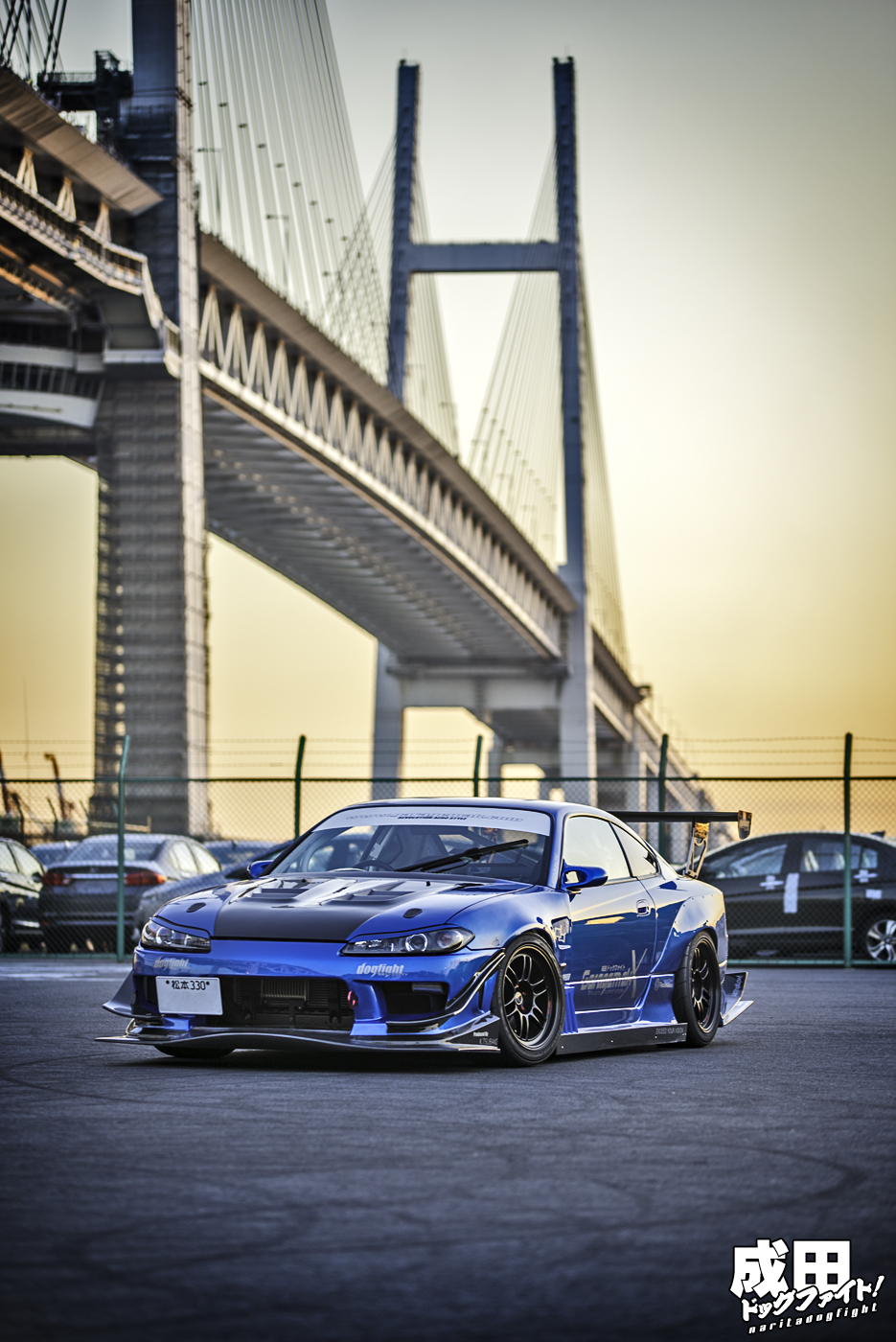 Unfortunately, the lots was full of overflow from a recent shipment of cars.  Usually this spot makes for a really nice backdrop at sunset.  I didn’t want to go through the hassle of photoshopping the cars out because, honestly, Baki’s S15 takes all the attention anyway. 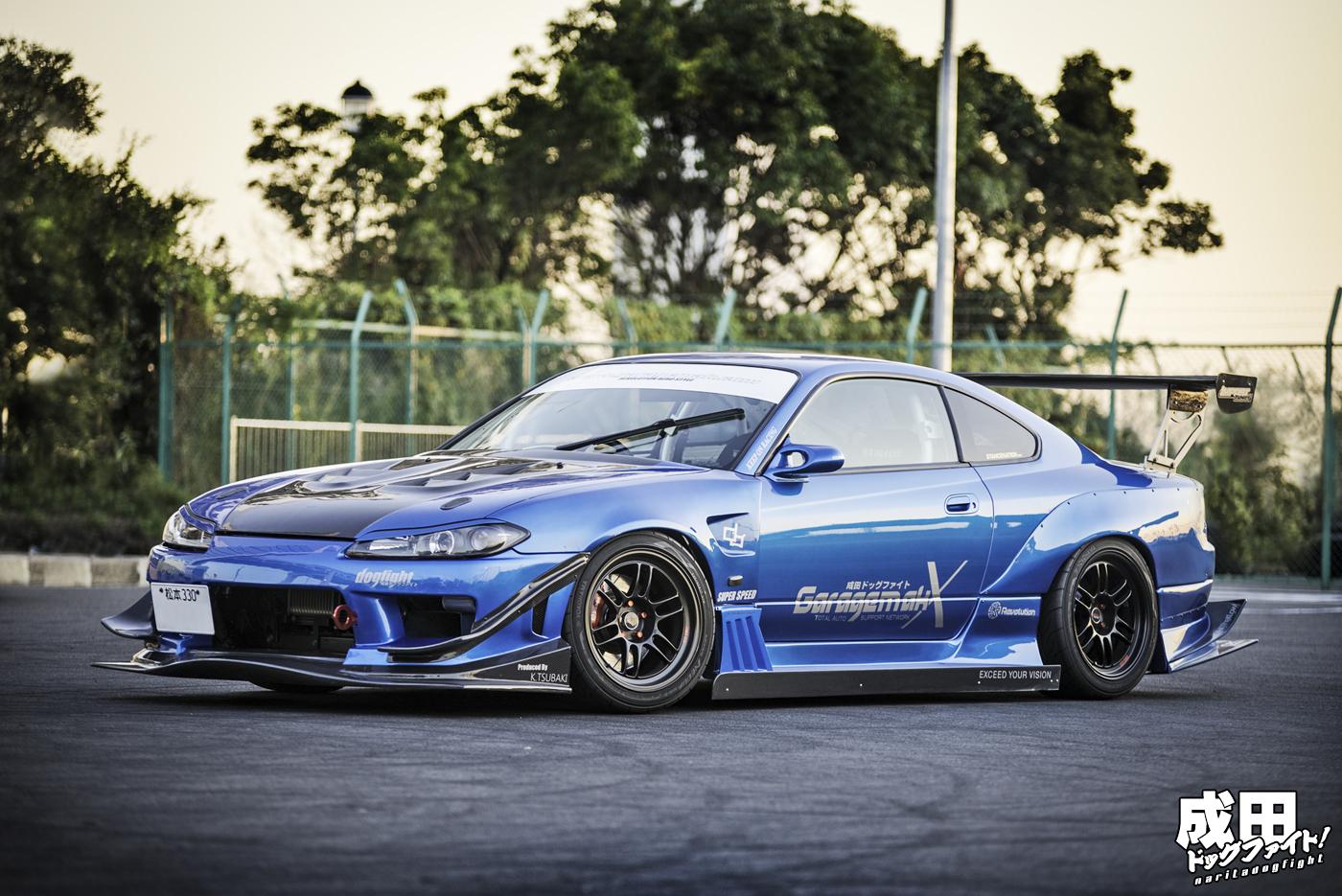 The Type 5 front end is Mak’s newest evolution of the S15 bumper and they really nailed it.  The whole car flows very well from front to back, with the LINK designs adding a touch of personalization. 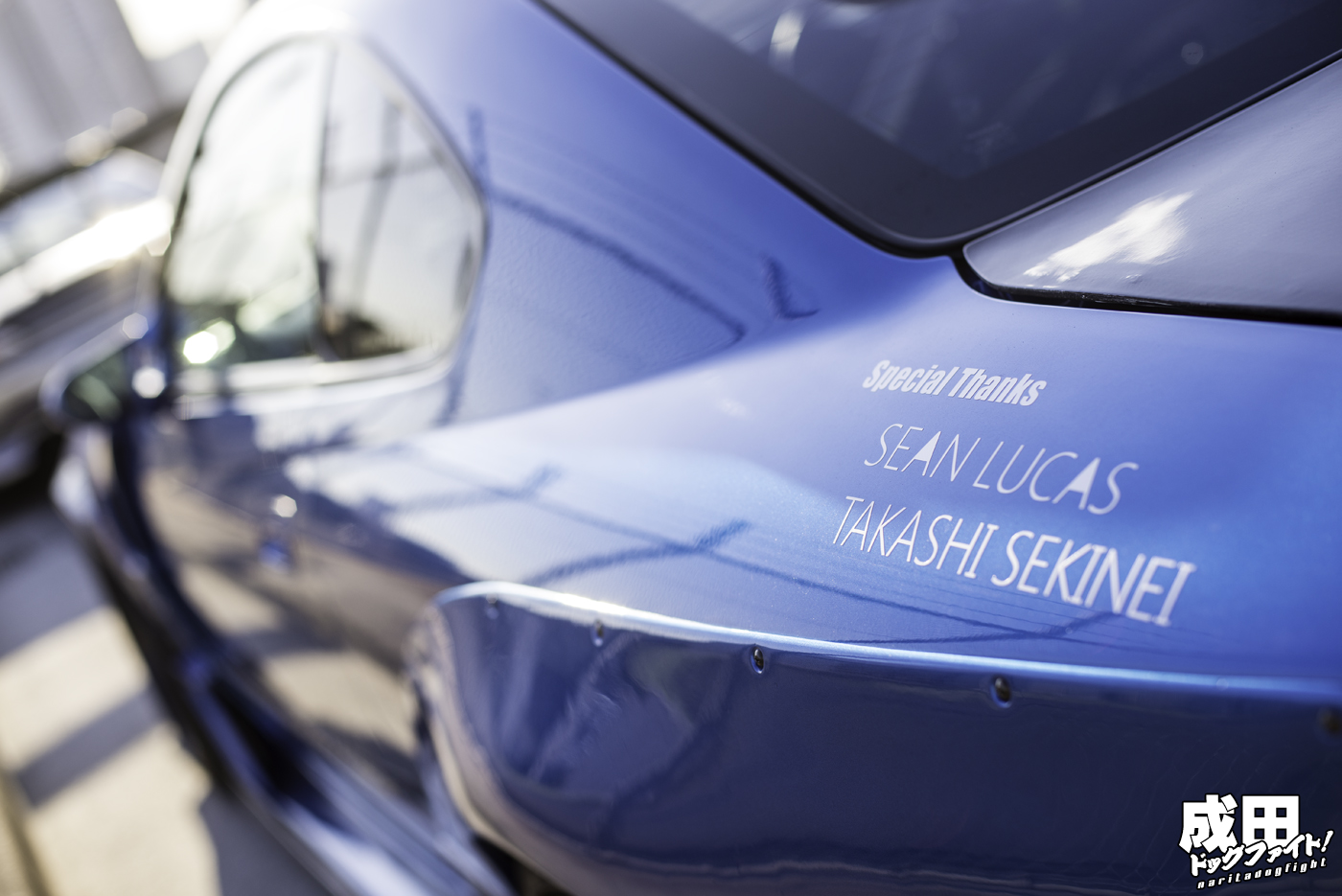 It’s true that collaboration beings with a mutual understanding of the direction of new ideas.  In doing so, much like the airplanes flying above, we can continue to connect more and more people over a common passion.  Baki’s been very supportive of all that we do together, I’m very thankful to start our new venture off with such success and I am looking forward to furthering our relationship throughout 2015.  I’ll get to catch up with Baki and the Mak guys at HKS Day next month and am already getting excited.

Stick around throughout the week to catch a highlight of the other two Mak cars!