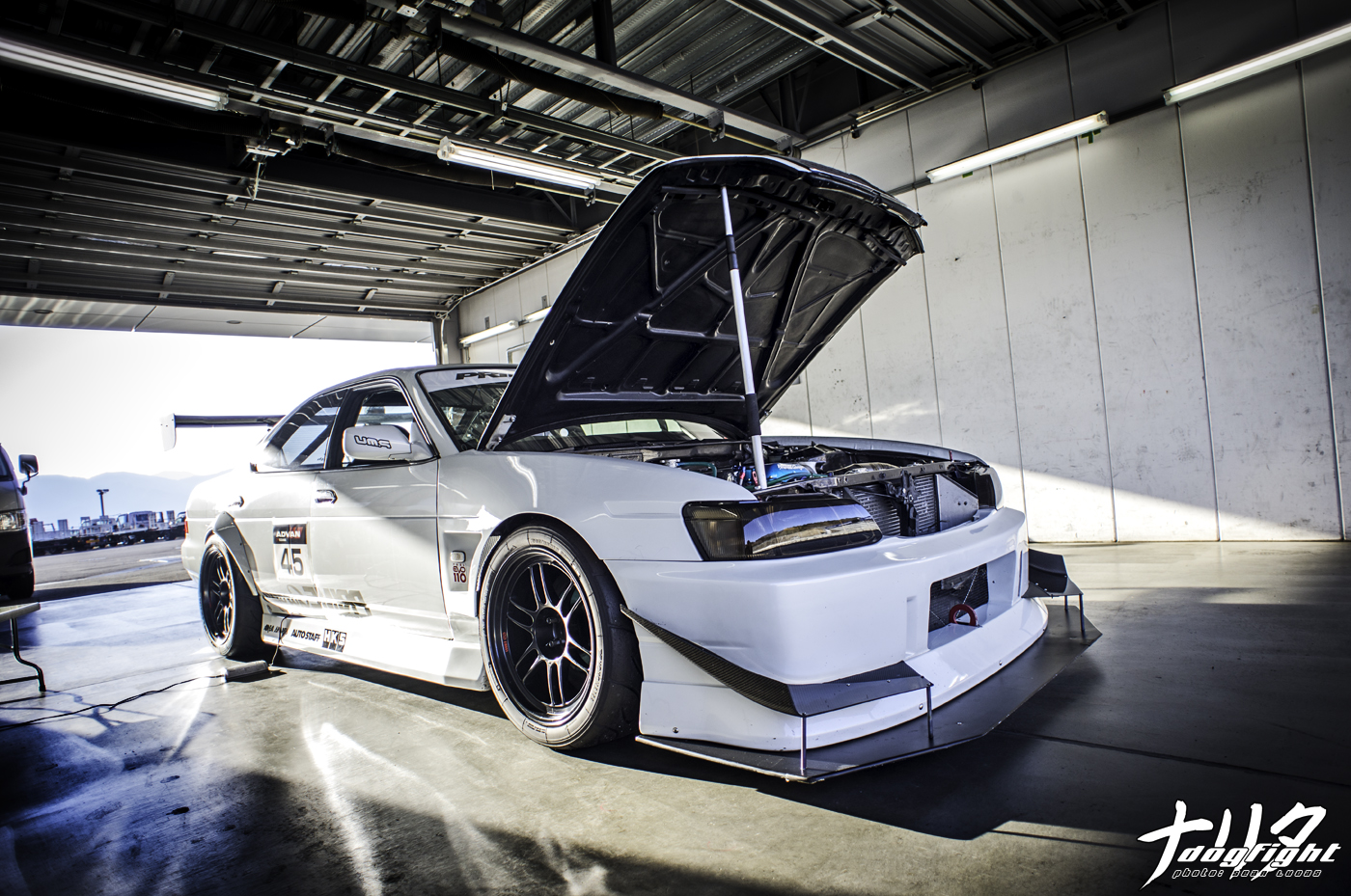 As I weaved my way in and out of the garages along the Fuji Speedway paddock, my eyes were drawn to many an interesting machine.  Mostly revisions of cars that had run in the previous year’s Option Super Lap; the Esprit NSX, Pan Speed’s FD, the pair of Arvou S2000’s, the endless bounty of R35’s that seem to radiate an enormously unnecessary amount of power.  So, basically it was your typical HKS Day lineup.

There was, however, one car that I truly never expected to see in one of Fuji’s garages; a C35 Laurel.  Yup, that’s right.  Nissan’s late 90’s, early 2000’s, answer to the family sedan race.  A car that was created to compete with other grocery getters like the Toyota Cresta, and Honda Inspire.  I gotta say though, while I didn’t expect to see it, there it was; and I’ll tell you now, it was glorious. 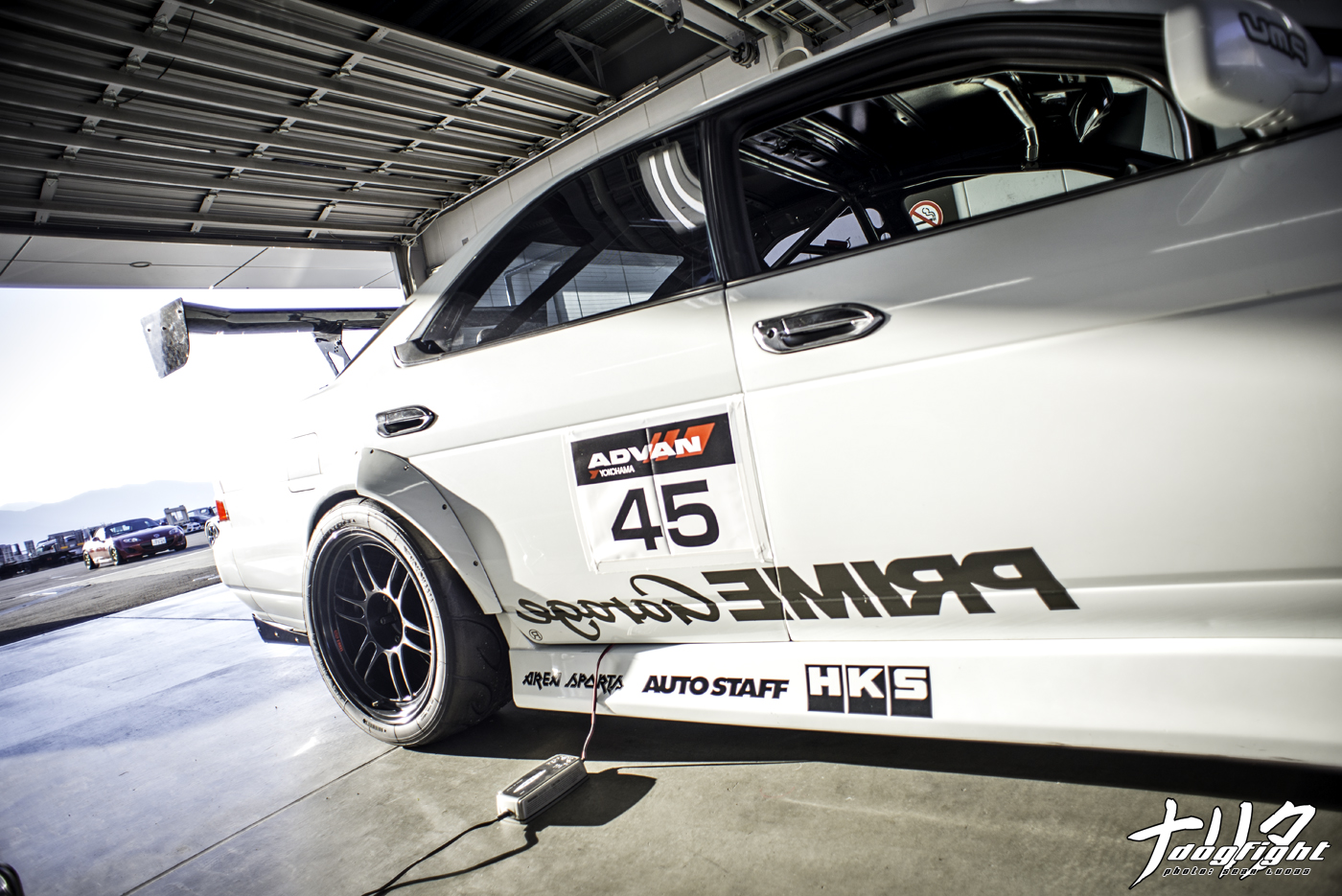 A small, very cool, outfit based out of Fukuoka (which is in Kyushu…which is extremely far from Fuji – some dedication there), Prime Garage bent all the perceptions when they built their time attack HC35 demo car.  If you were like me, the first thing that came to mind would have been the weight of the car.  I mean, Laurels tip the scales at over 3,000 pounds!  That’s not the kind of weight you want to be carrying around the circuit.  So I was thinking for sure that they would have gutted the hell out of the toddler hauler; that wasn’t the case though.  Instead of putting the car on a major diet (small trimmings aside), Prime Garage has actually retained the majority of the interior – wood trim and all.  I was surprised, but this car does run in the ‘Heavy 2WD’ category of time attack. 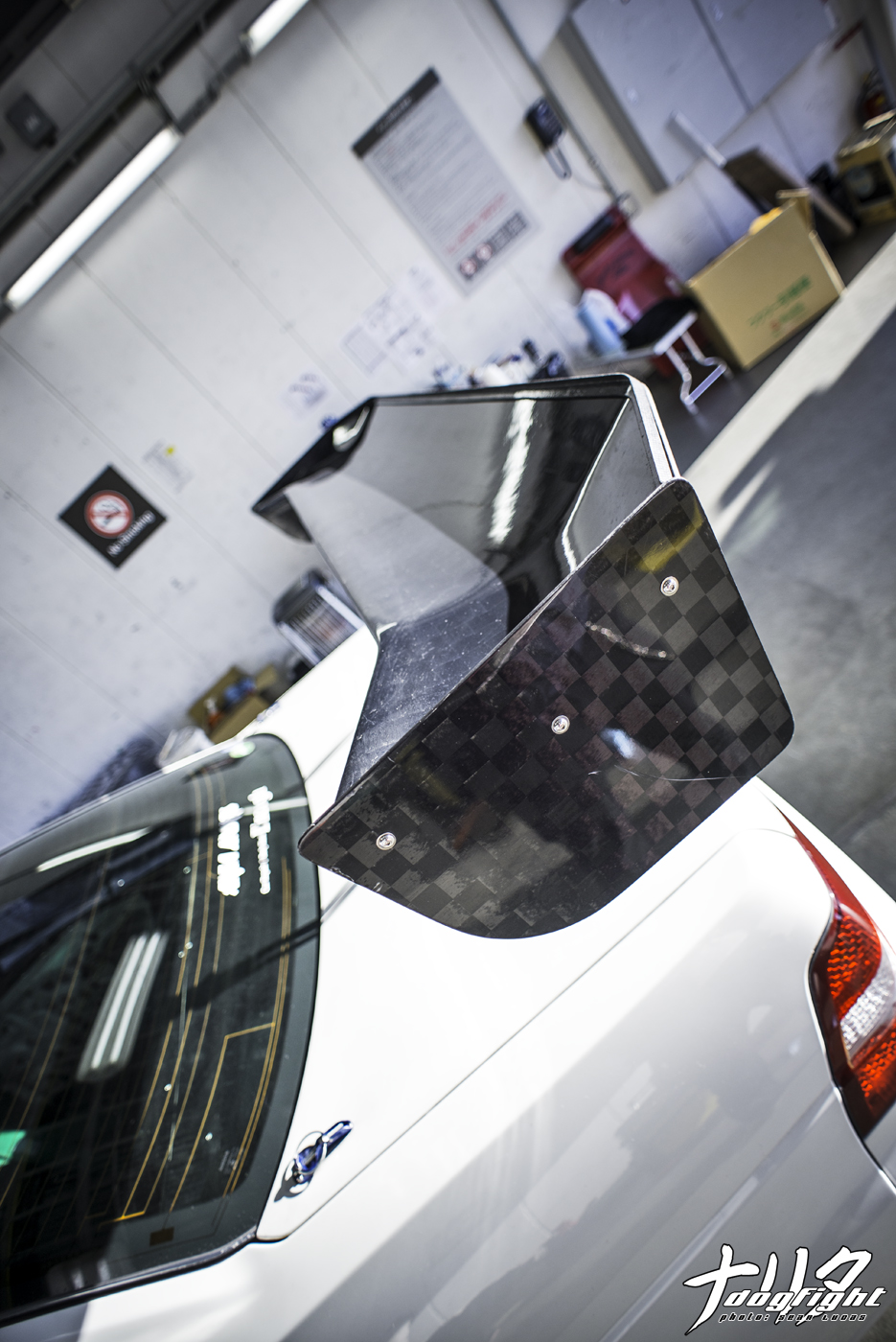 Exterior wise the car has gone through some basic cosmetic and aerodynamic changes.  A custom made front bumper (equipped with splitter and canards), and widened front fenders help house the 295 series A050’s, and rear flares help out the same towards the back.  A GT Wing is utilized to help keep the fat rear end planted and stabilized through turns. 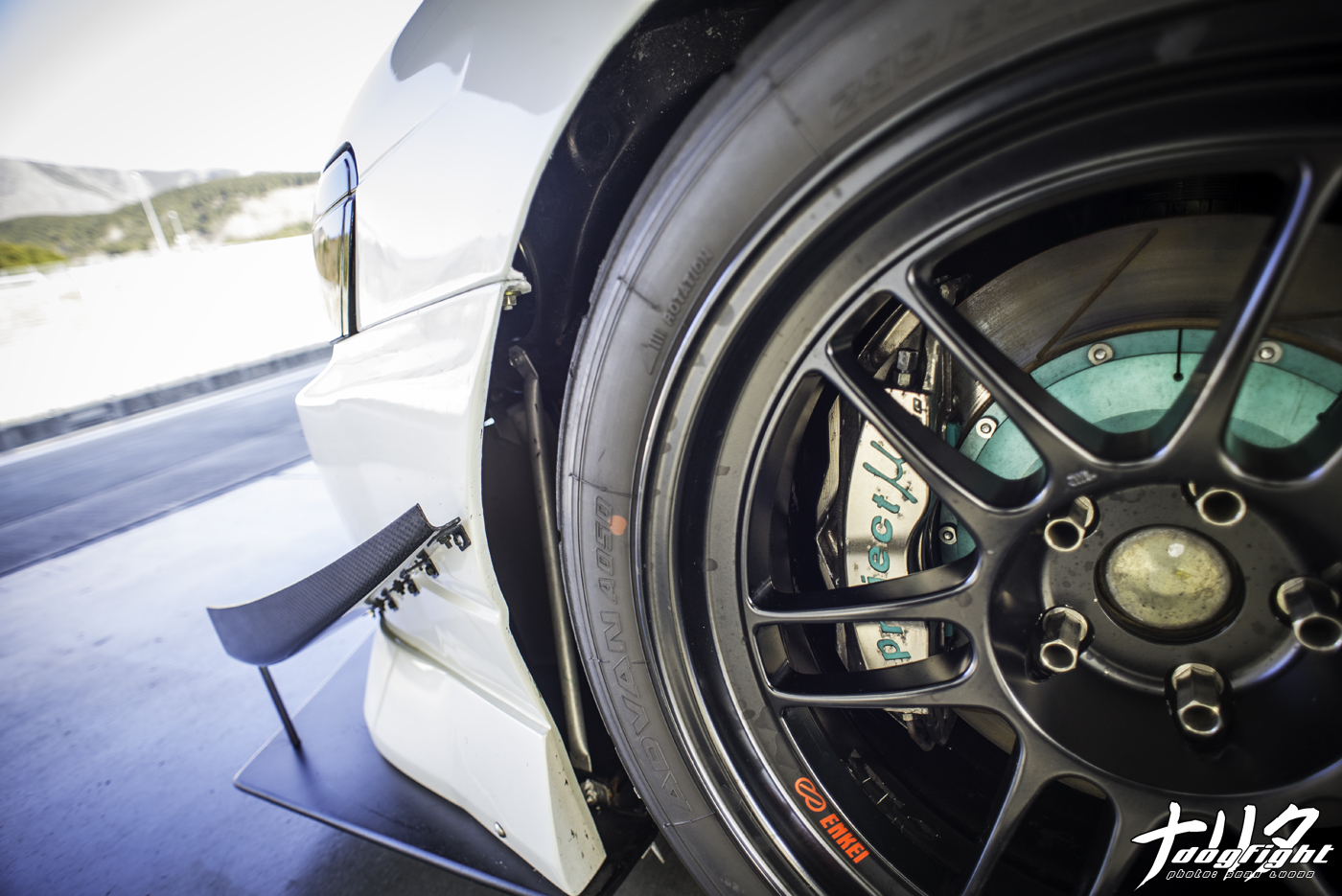 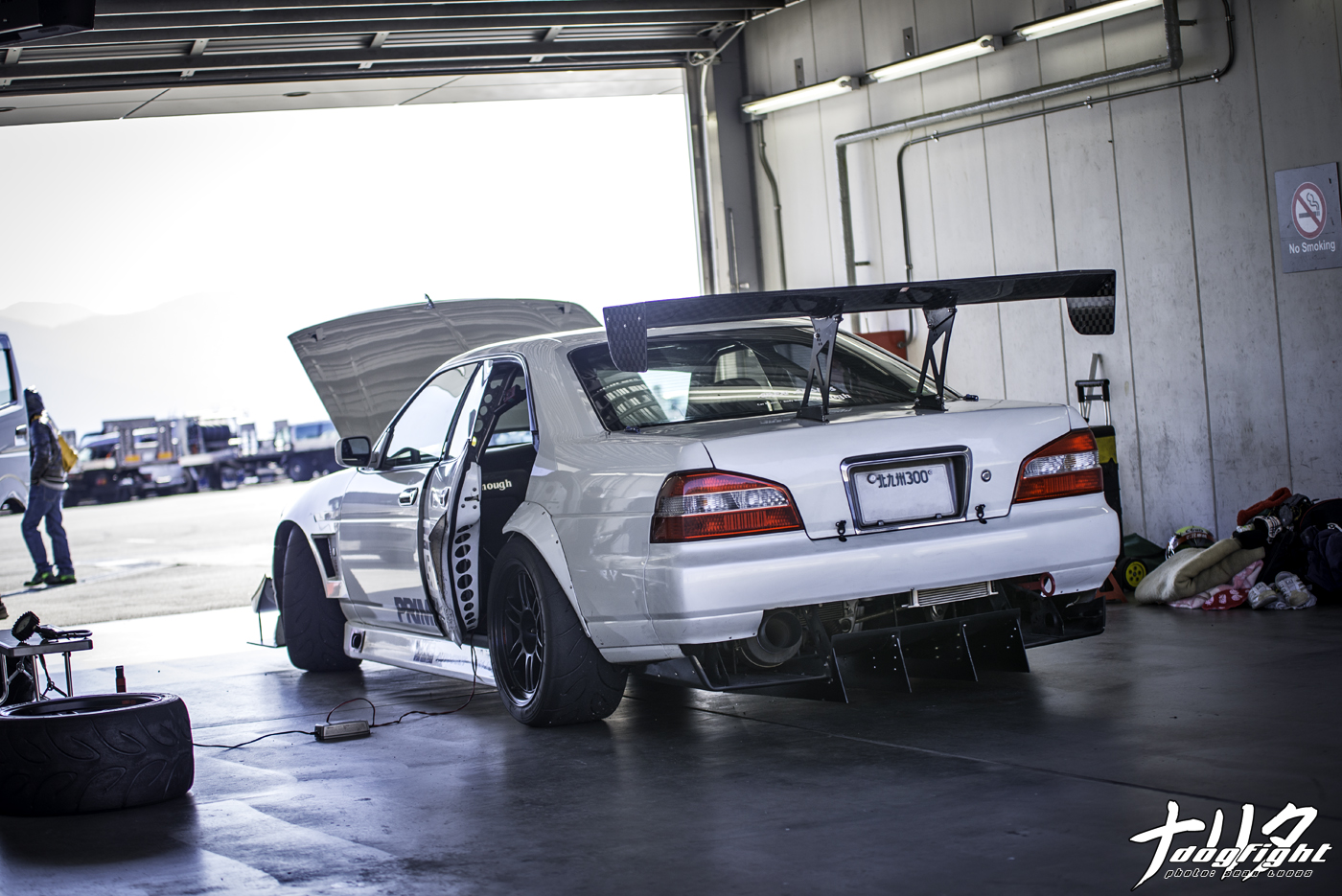 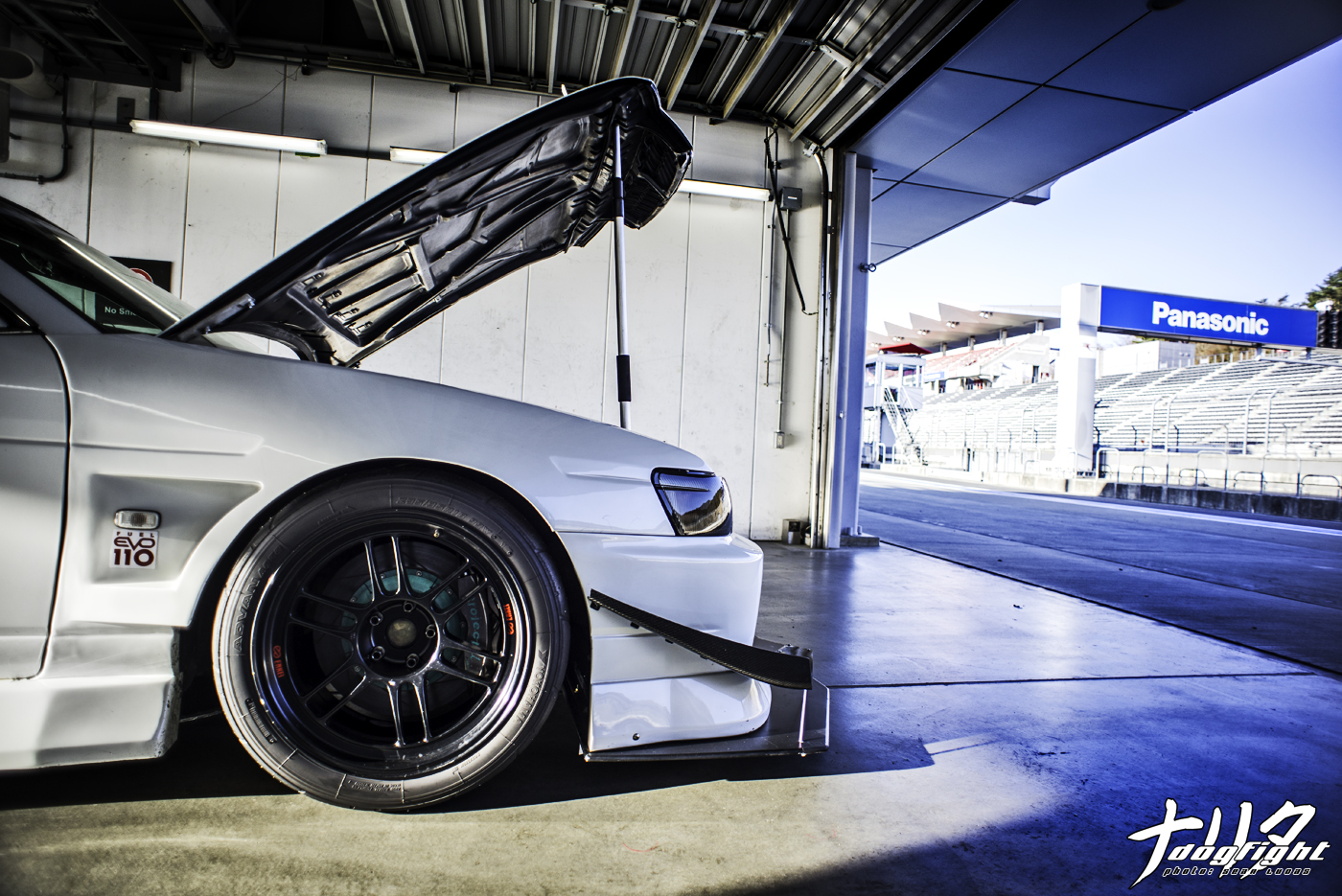 While, aesthetically speaking, the exterior of the car is quite nice.  It’s great to see such an obscure car decked out in time attack fashion.  The real center piece, though, is at the heart of the car… 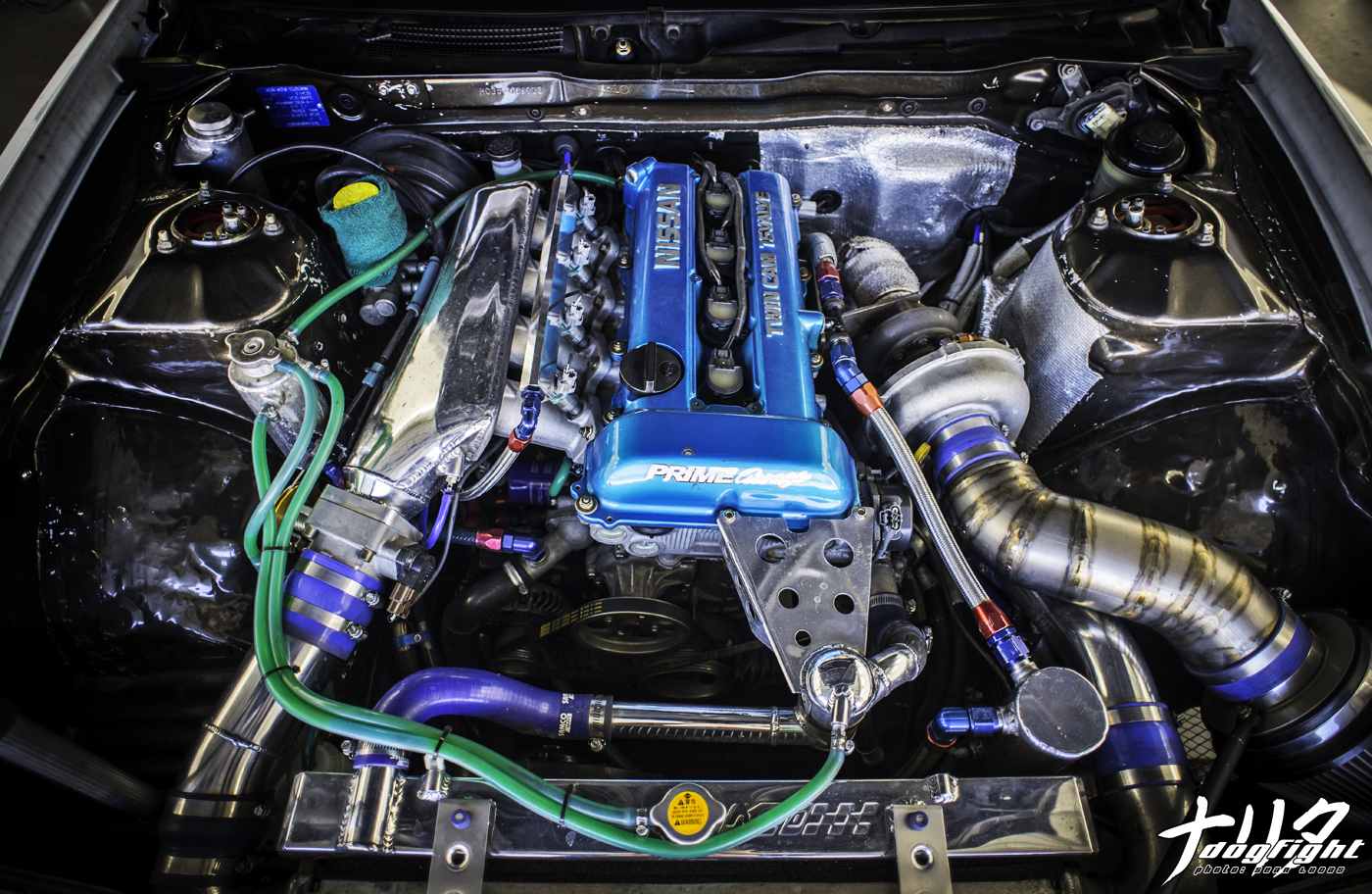 …where we’ll see the OEM provided RB20 has been replaced by a rather healthy looking SR20DET.  The top mounted turbo is fed by a very cleanly made custom piping and intake manifold, while a Koyorad radiator cools the whole setup down.  Prime Garage is a member of the coveted RH9, so you know the car has power. 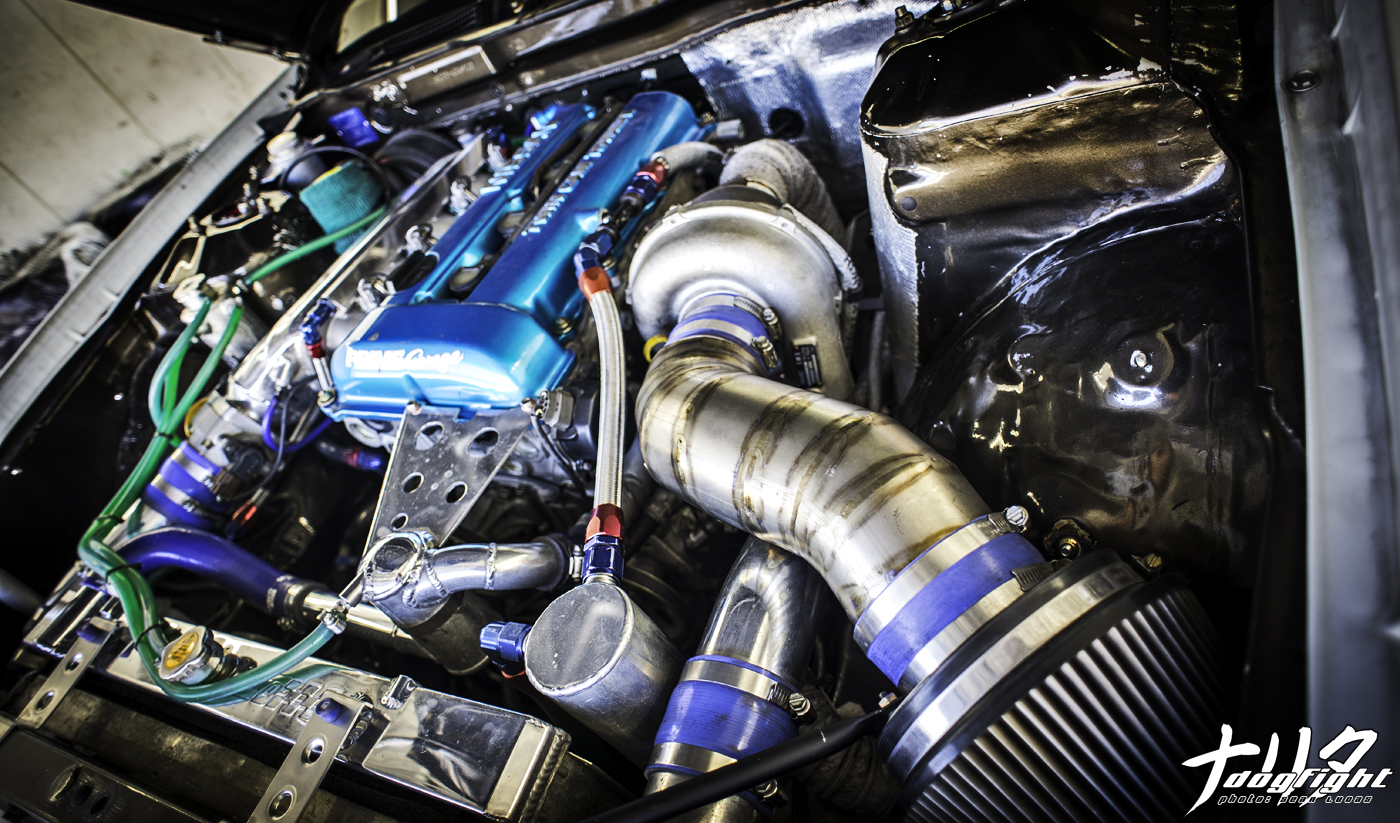 Looks like the shock towers have some work done to them as well…not to mention the beaten wheel wells. 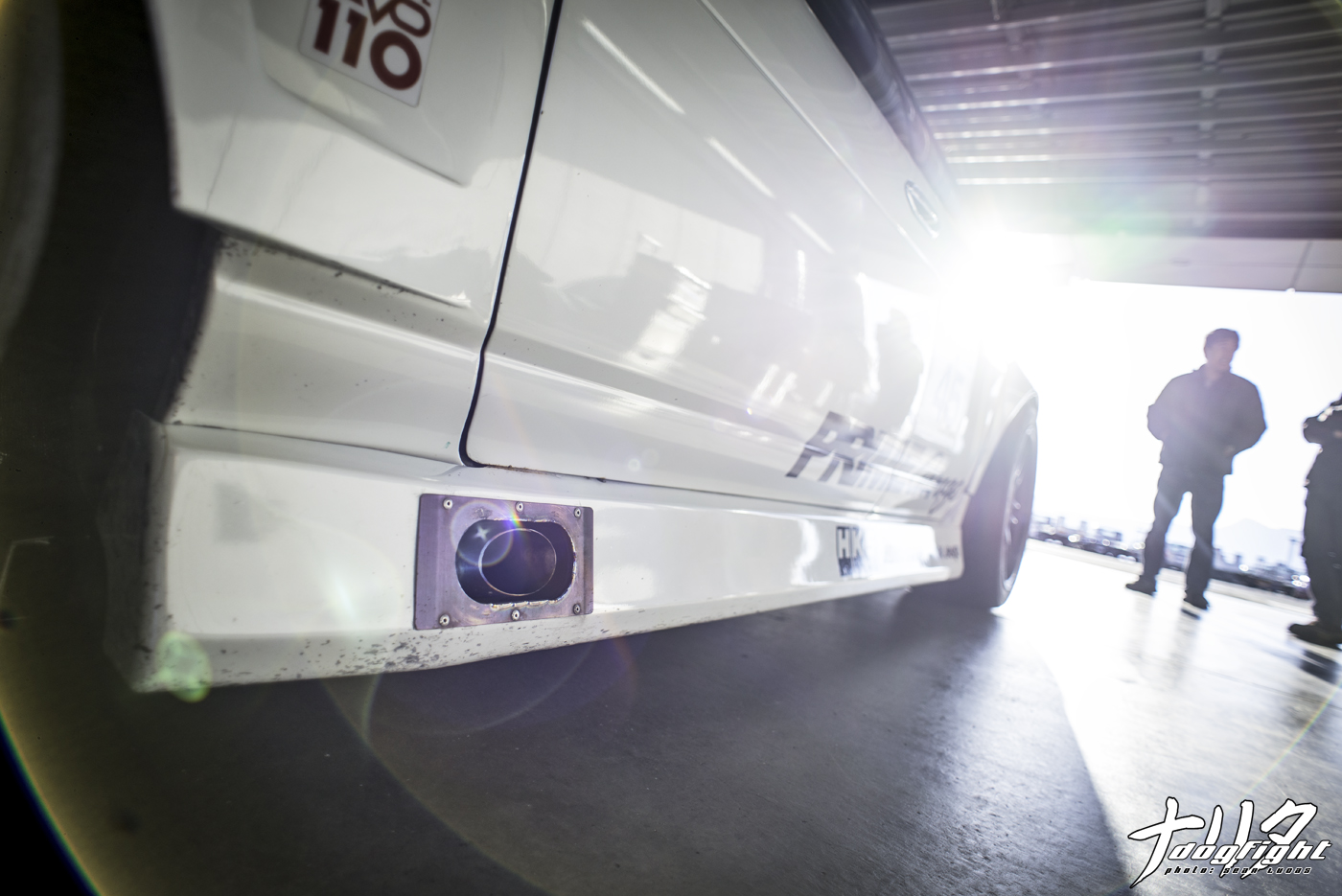 The external wastegate exists out the passenger side, right behind the front wheel.  This makes for a very loud, and very crispy sounding engine tone… 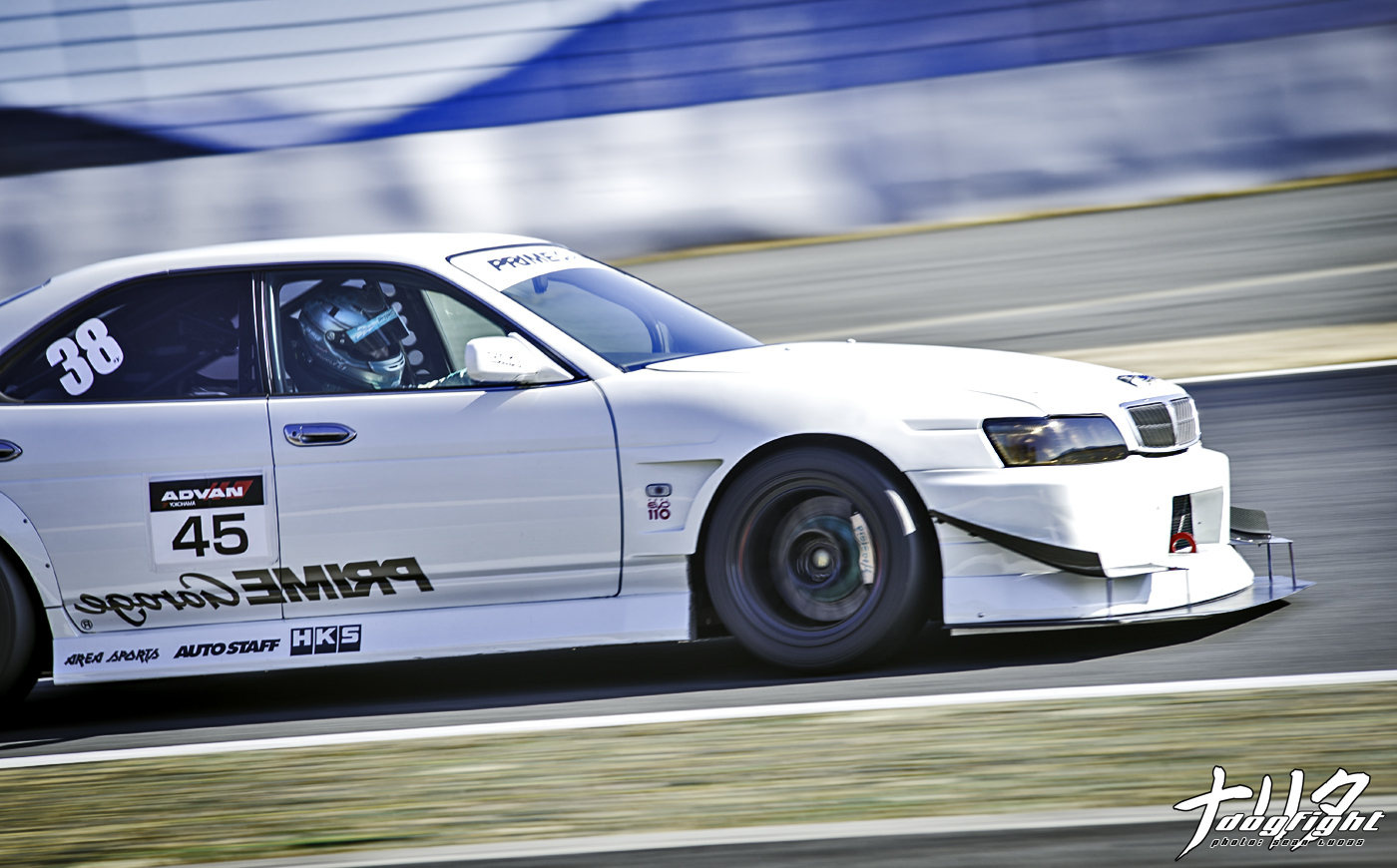 …which was clearly heard as the C35 ripped through Fuji Speedway. 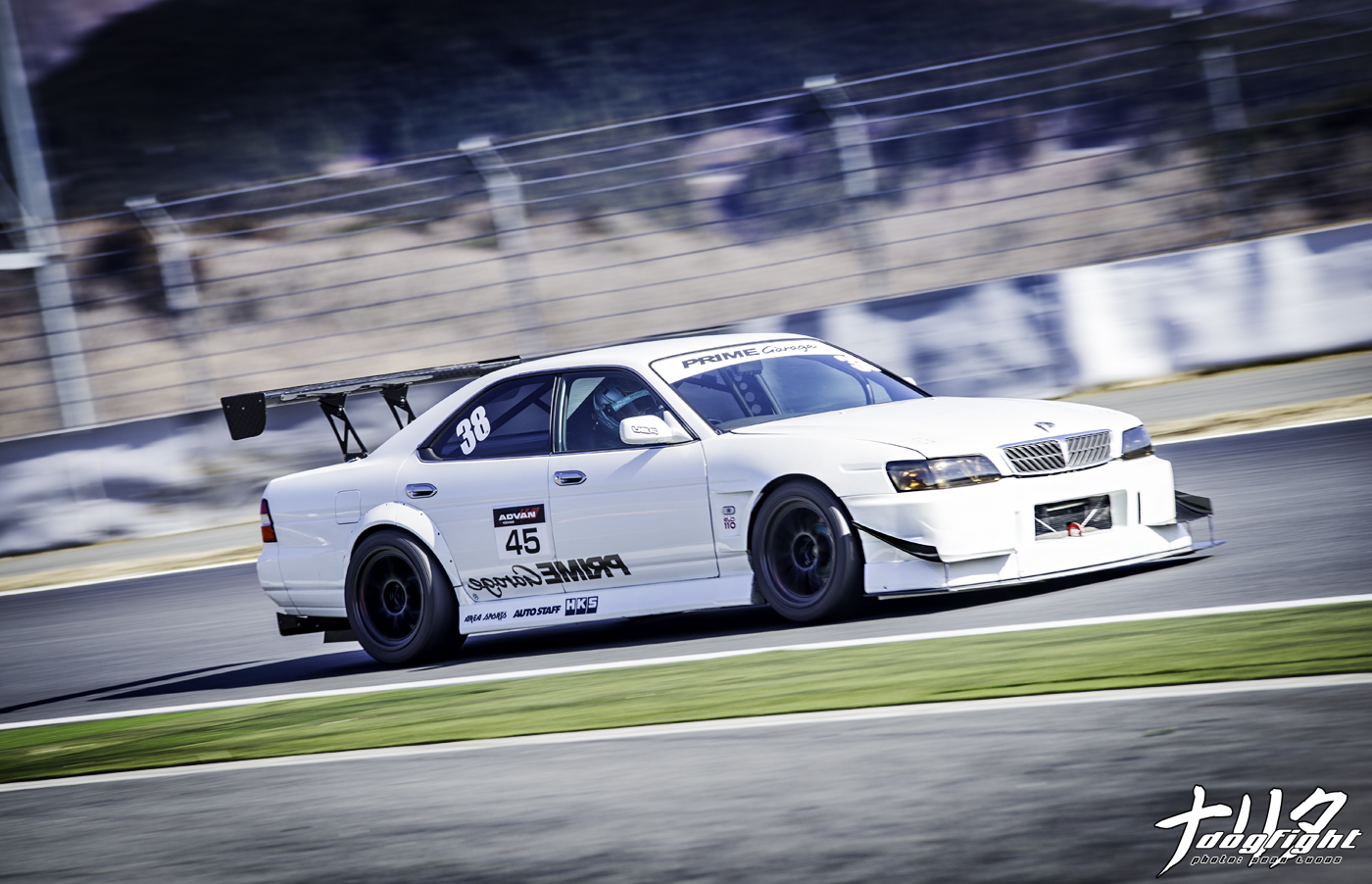 And rip it did.  With Yamano Naoya behind the wheel, the Laurel was able to pull a 1’48.423 around the 16 turn circuit; that’s .4 seconds faster than the Garage Mak Z33 (also in the same class), and 2nd overall in the Heavy 2WD class. 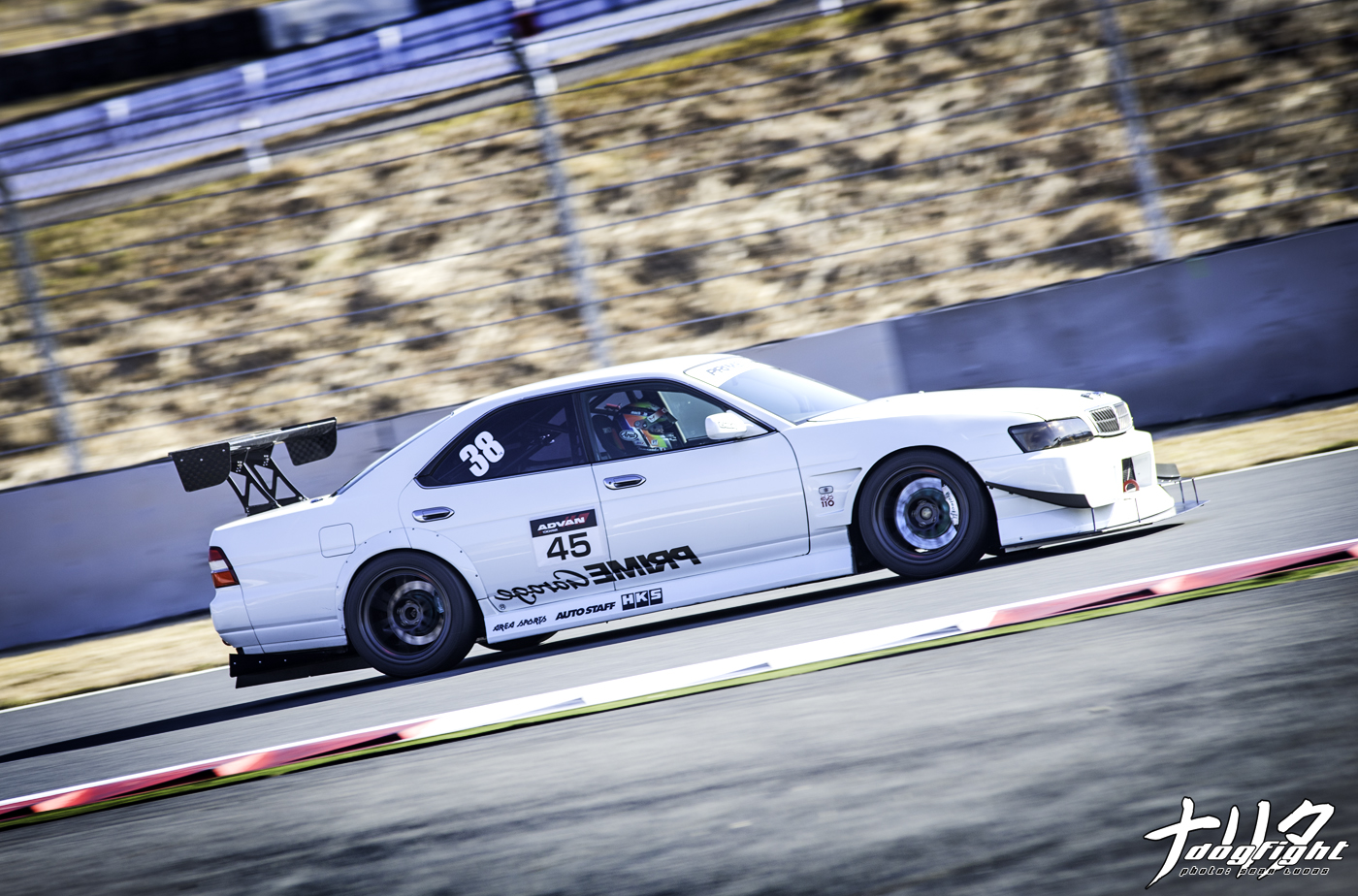 Definitely no slouch on the track…not to mention it looks amazing. 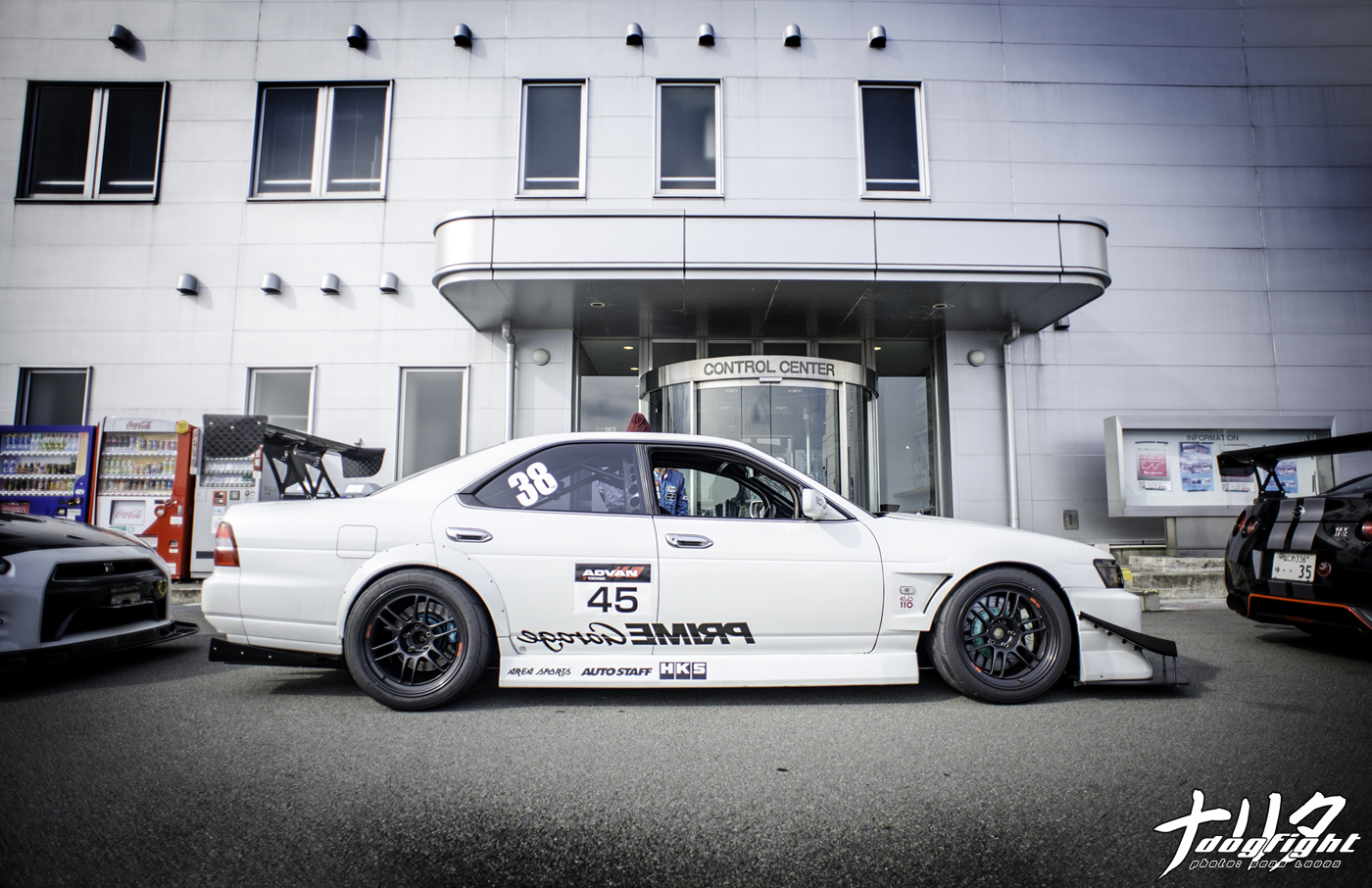 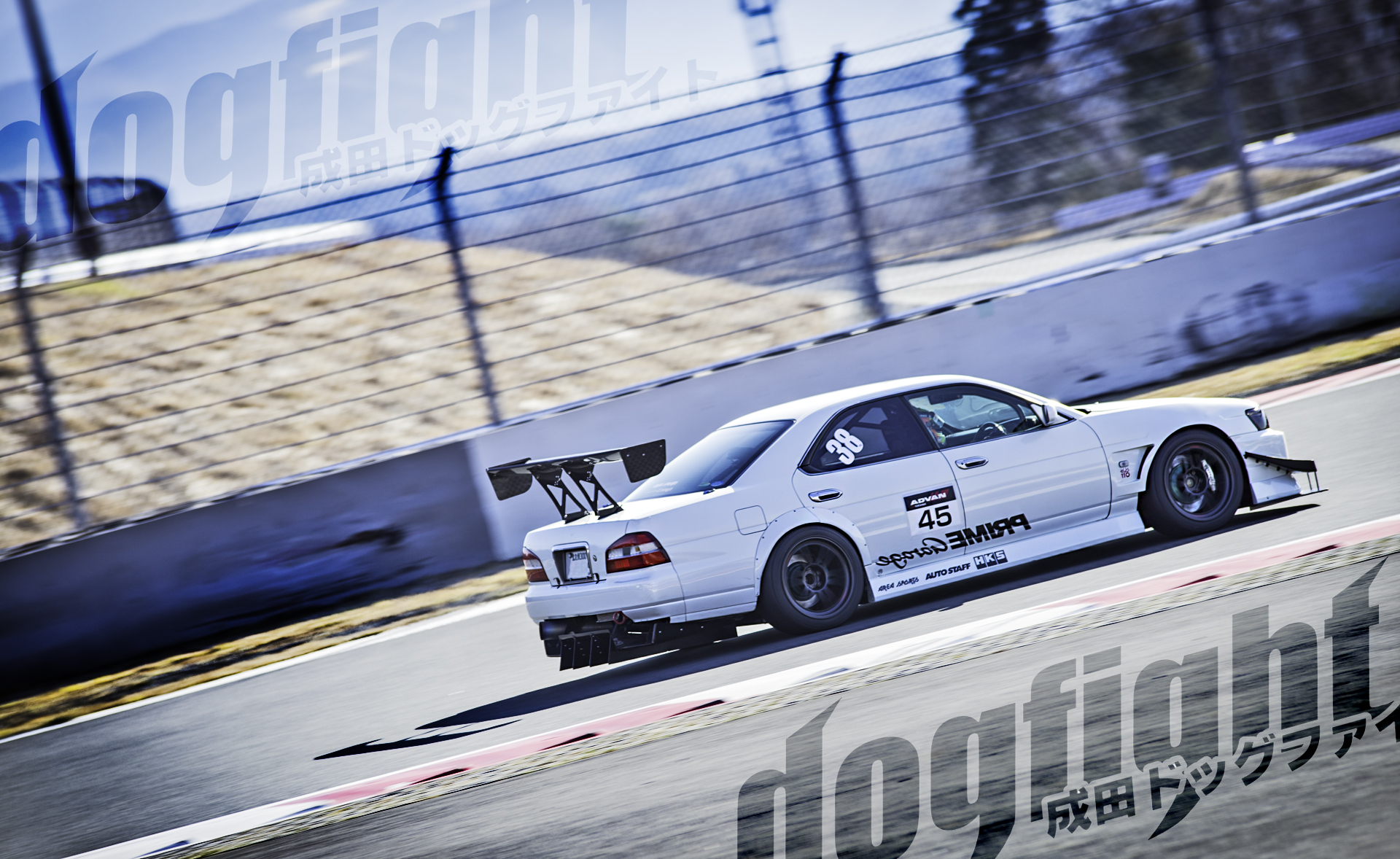 This last shot is a hi-res that can be used as a wallpaper.

Look forward to digging into Prime Garage a little further and find out what else they have in store for the C35, as well as other shop projects.