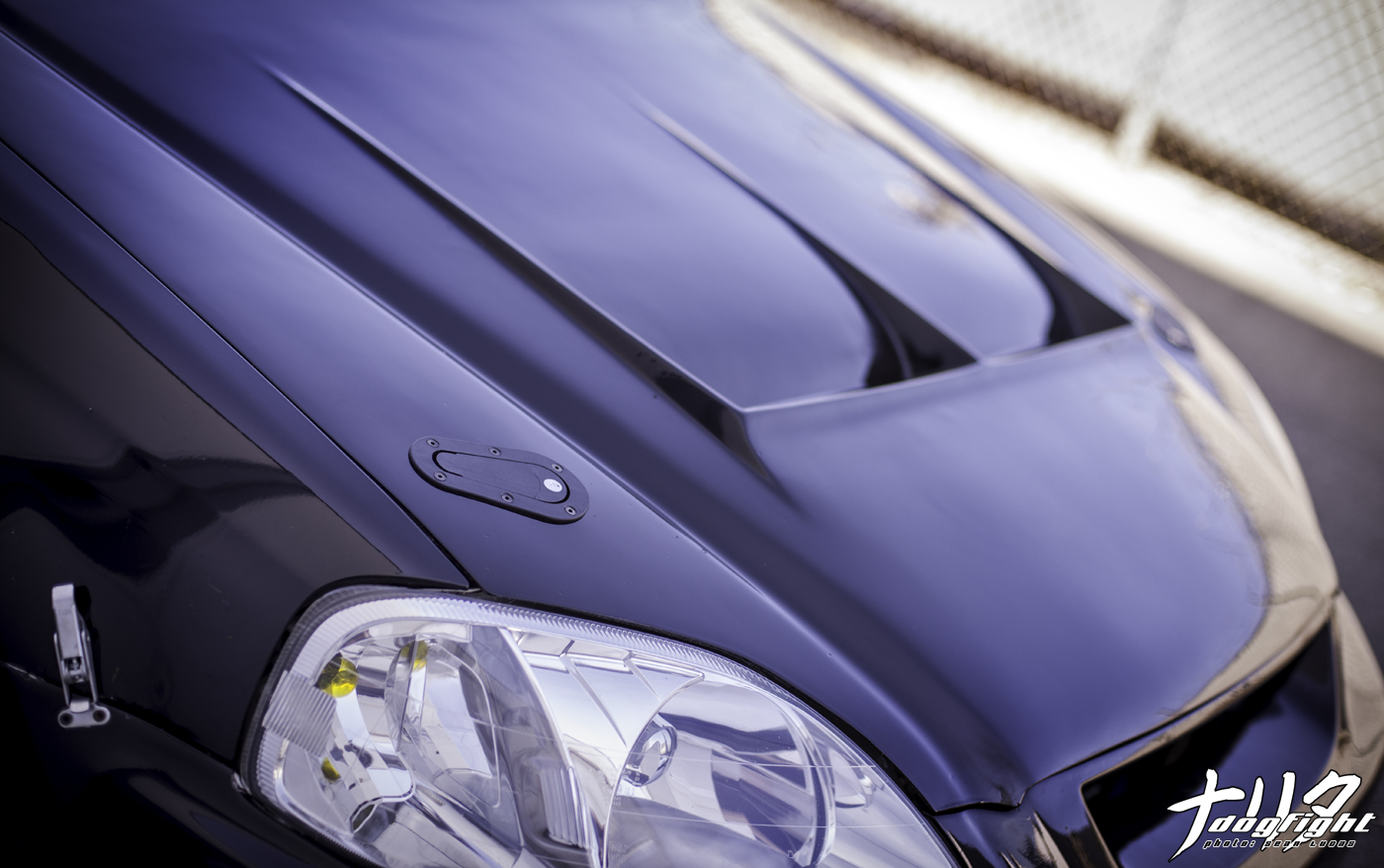 *Brushes dust off of WordPress topic*

Whew, been awhile since we’ve visited this one hasn’t it?  I didn’t realize it until I went back and verified, but the last post on my personal build was all the way back in July!  What the hell have I been doing the past 8 months?  I can answer that for you – not working on the car.  You can view the last update here to get an idea of where we’re picking up from.  In all honesty I probably wouldn’t have posted anything more on the car except for a few comments I get on IG (@naritadogfight) requesting an update.  I’ve pretty much just relied on the few pictures I post as a record of my progress, but since I had my camera at the shop yesterday I decided to snap a few pictures.  You’ll be quick to notice not much has changed. 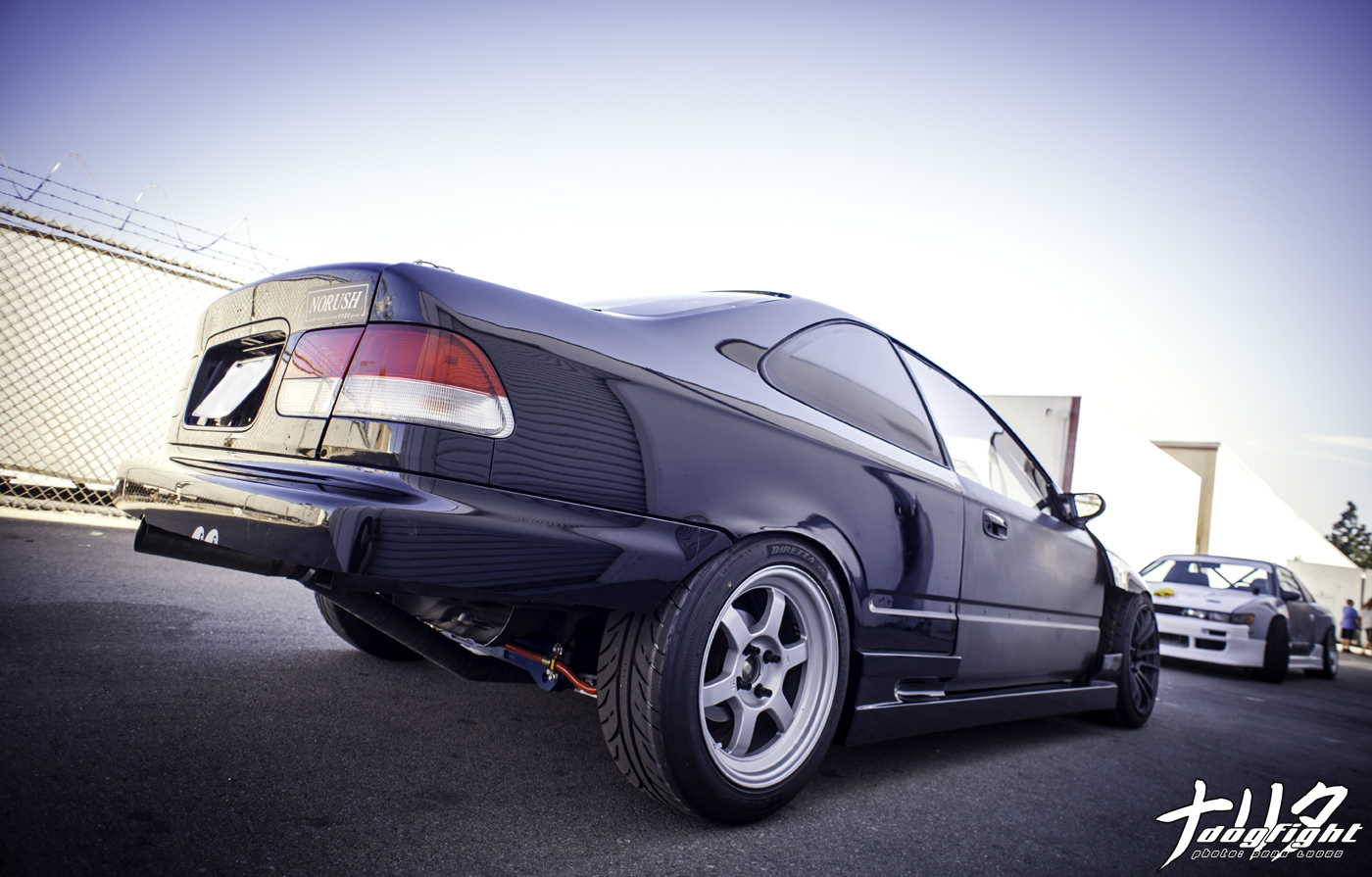 It’s true that my job and the website keep me going pretty much occupied 95% of the time, but I somewhat exaggerate the lack of progress on the car.  I’d say that, given my work schedule, the amount of traveling I do during the week, the little bit of time I can fit in at the shop, and my feeble attempts at trying to piece together a social life, that the progress on the car is going pretty much as planned haha.  Looking back on the pictures and comparing it to the previous post, there have been some small accomplishments.  I actually had to go back and reference, but I don’t think I’ve posted an update with these TE-37V’s on.  They’re 16×8 +20 (?), and a bit too wide for the rear.  I pulled the shit out of the rear quarter panel, and with the new alignment they seem to be OK now. 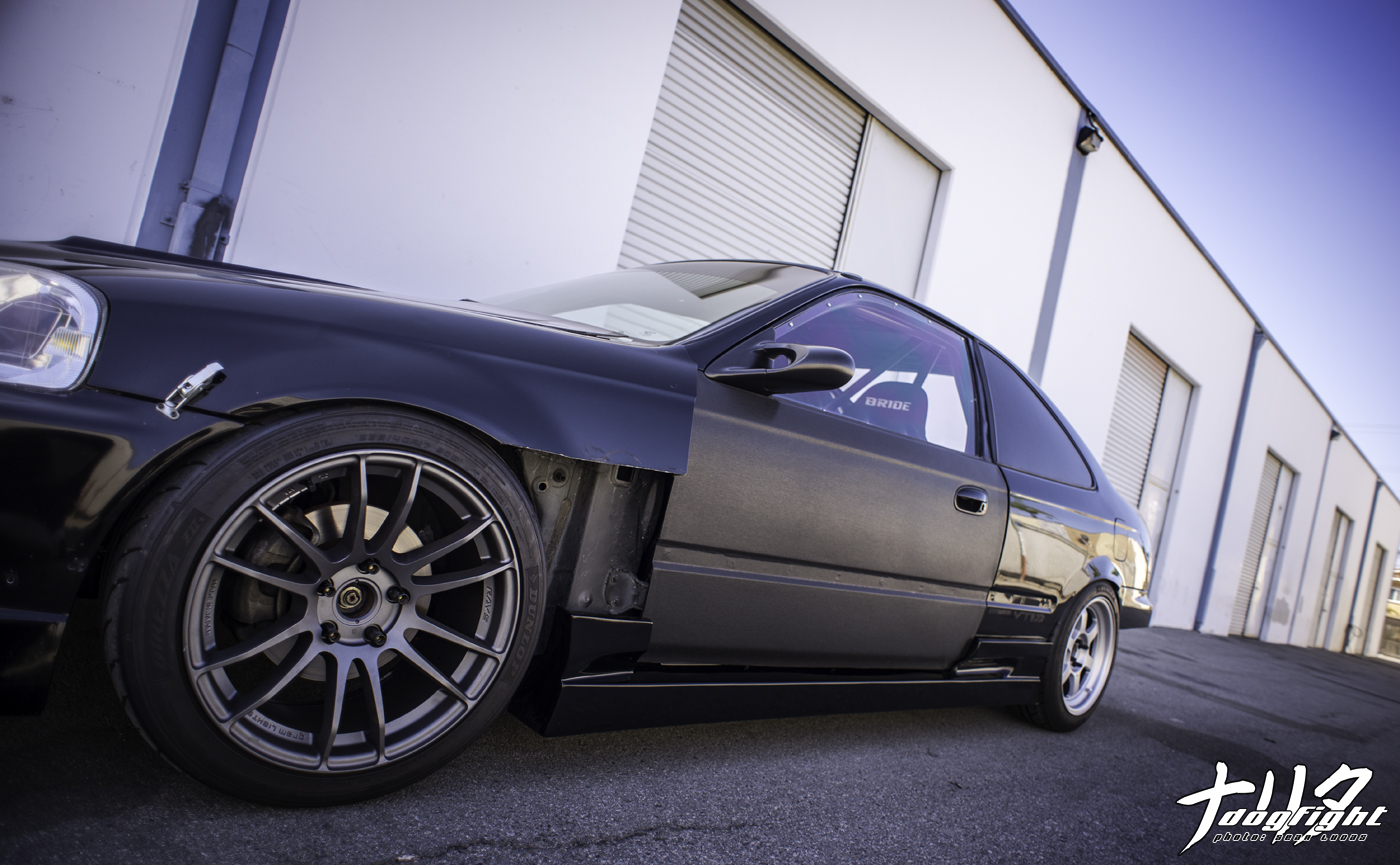 I replaced the C-West skirts with Bomex ones.  Due to their shape and relative boxy flatness, they will make a better platform for mounting aero to.  I’ve hard mounted them to the chassis underneath as well as with rivnuts into the door jam. 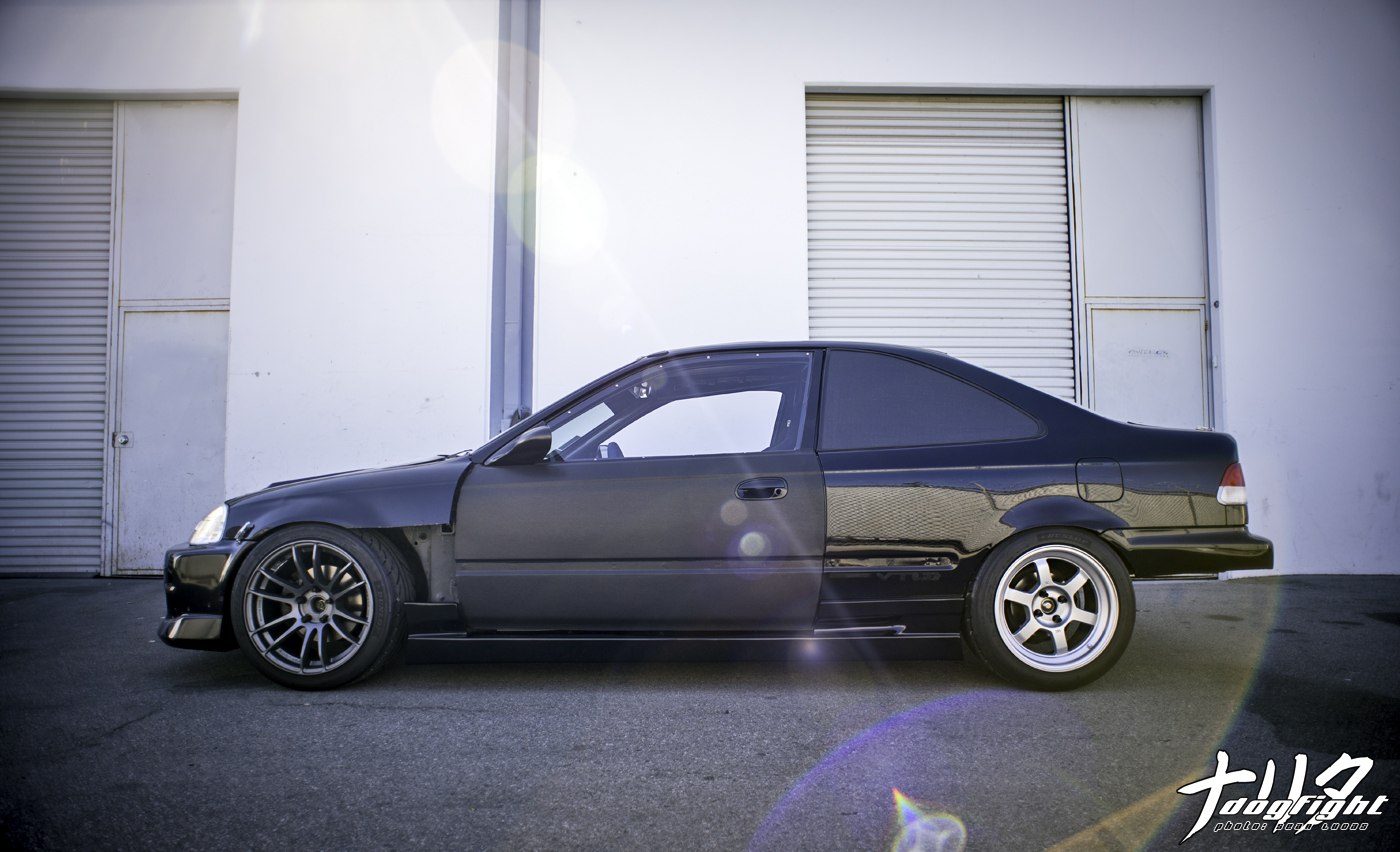 I took the car to West End last week where Chris put a little suspension voodoo on it. The car weighed in at 2139 with myself in the drivers seat, which means the new curb weight of the car is 1974 pounds.  My original goal was 2000 pounds with me in the seat, so it looks like I have a few more pounds to shed, but I have high hopes.  We put a little rake on the car, and zero’d out front and rear toe.  Because of the car’s lighter weight, camber is set at a modest -3.25 front and -2.25 rear.  Really looking forward to next Saturday to see how the car reacts.

The car looks a bit bland at the moment, but there are a few projects in the pipeline that are taking longer than expected.  Our composites guy is swamped with outside work and I think everyone else is pretty strapped for time too.  I was hoping to have my splitter finished for this shakedown but doesn’t look like that’s going to pan out.  I also screwed up the carbon I had to make the fender vents and panel so I’m just going to have a huge hole in the side hahaha…oh well. 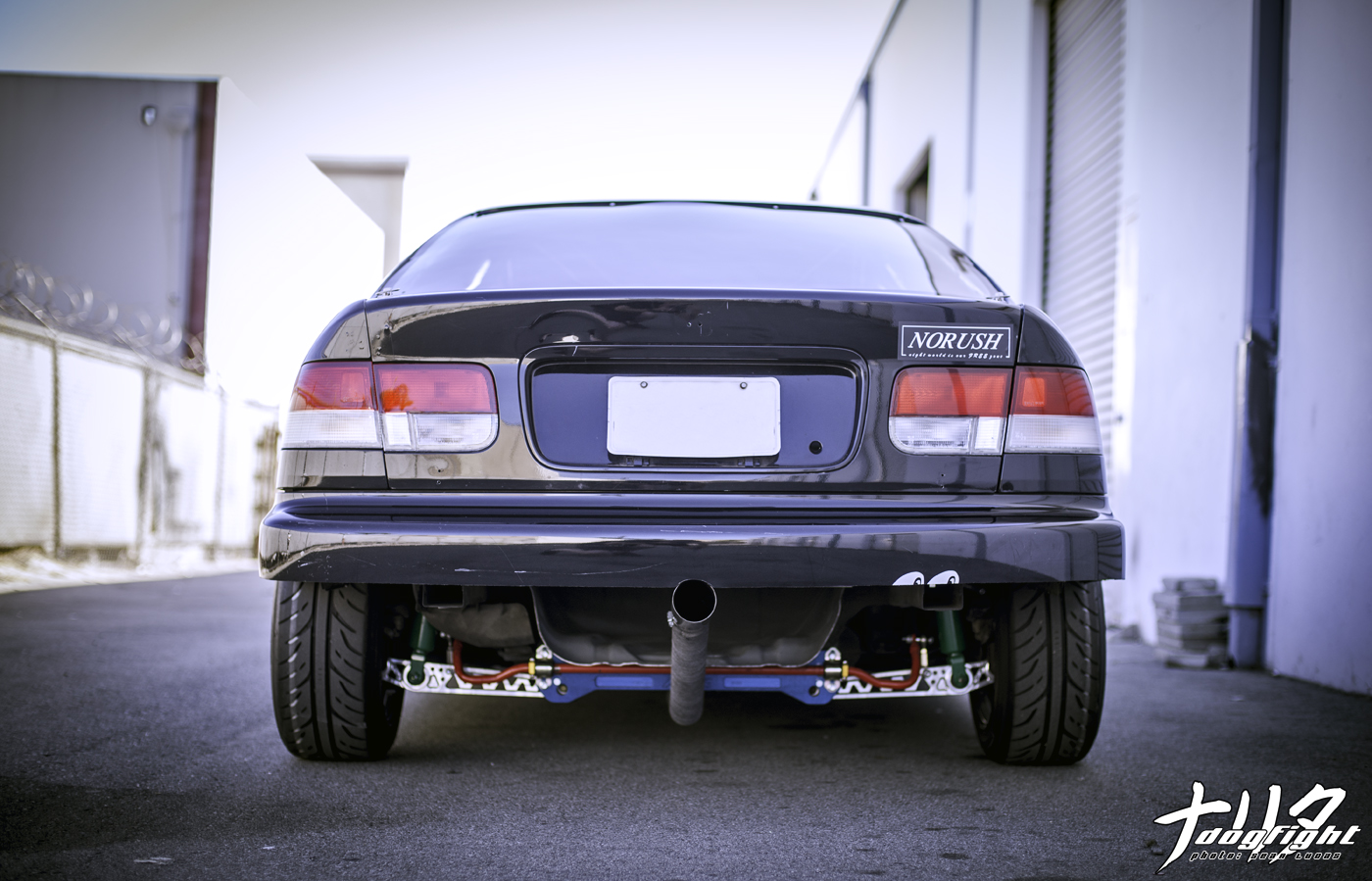 I suppose one of the major updates would be the completion of the center exit exhaust that Bardabe fabricated, with an honorable runner up of cutting the spare tire well out for the hell of it.  The car is freaking loud…loud and raspy, but I like it.  The tone will change a bit I would imagine after the engine work is done this Summer.  You have to keep in mind the engine has been untouched this whole time – it’s still the low comp setup I had when it was turbocharged.  I don’t really like talking about stuff I’m “going to do”, but the new setup will be a B18 block with CTR pistons, a mild cam and ITB’s.  I’m going for reliability, not power.  I’d be stoked with 180-190 whp. 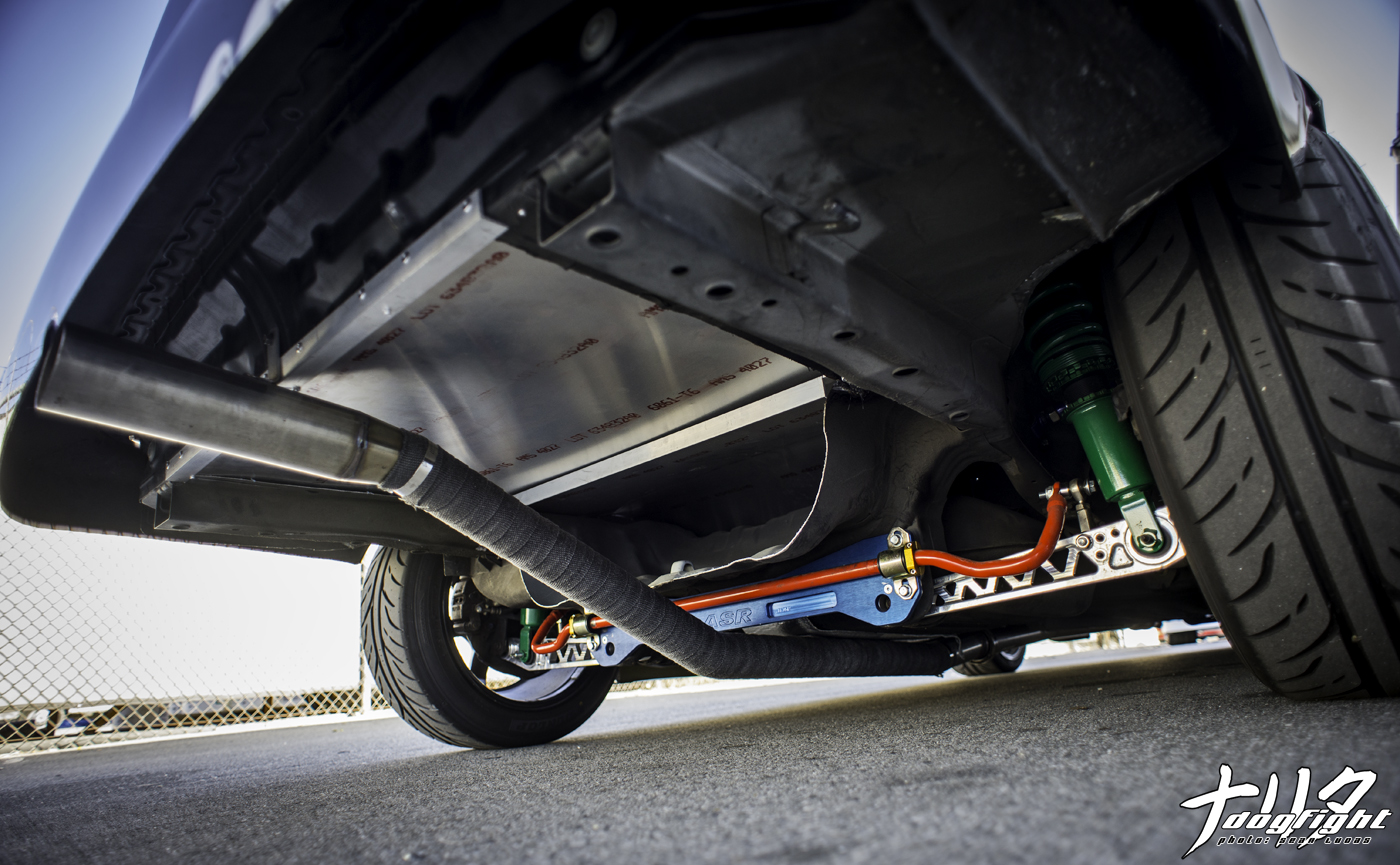 Here’s what the underside of the car looks like.  You can see the panels that Bardabe fabricated up to cover the massive hole in the trunk.  This picture reminds me I need to finished wrapping the rest of the exhaust :X 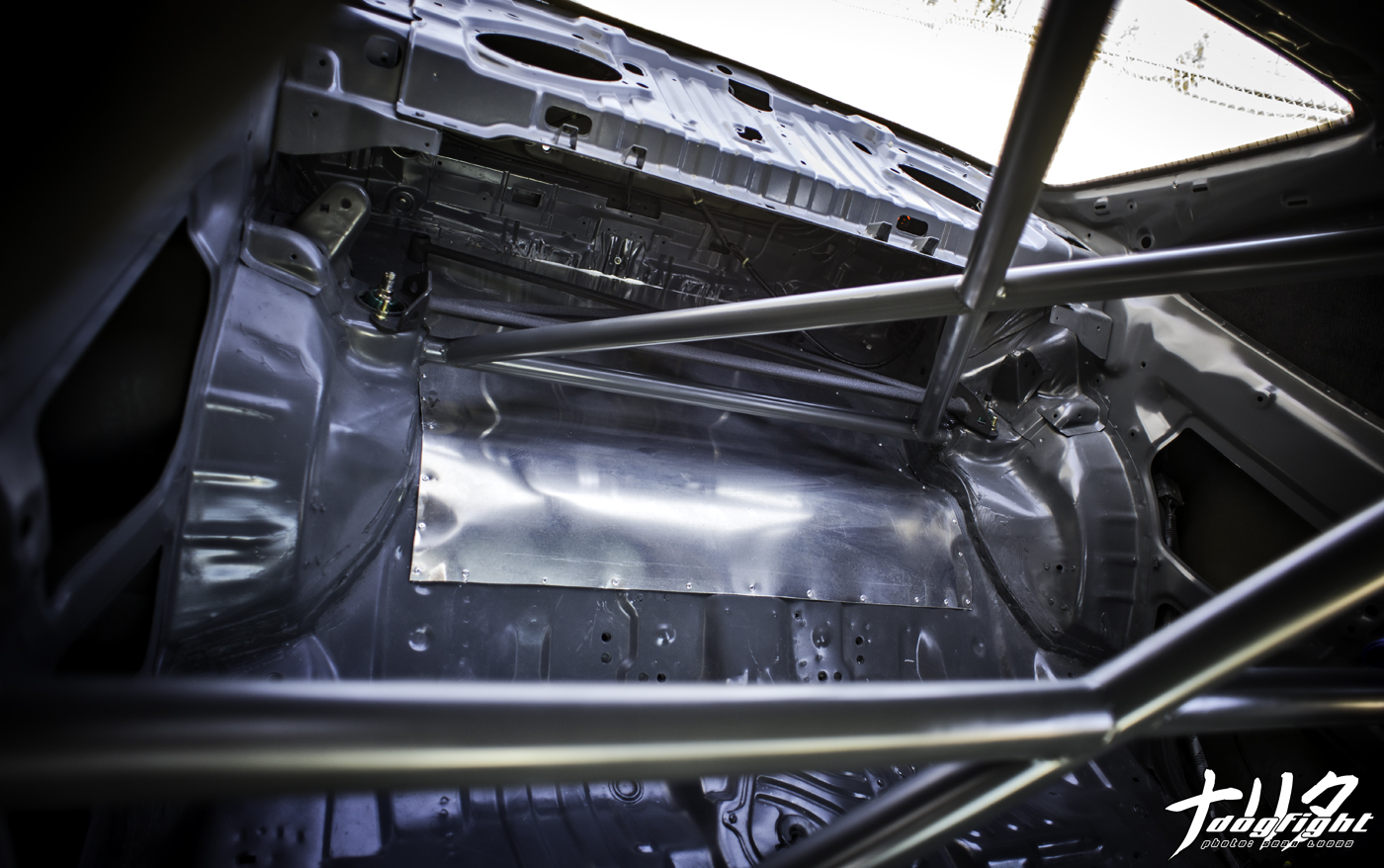 A shot of what the inside looks like.  Simple is best.  I need a huge chrome sticker for that piece… 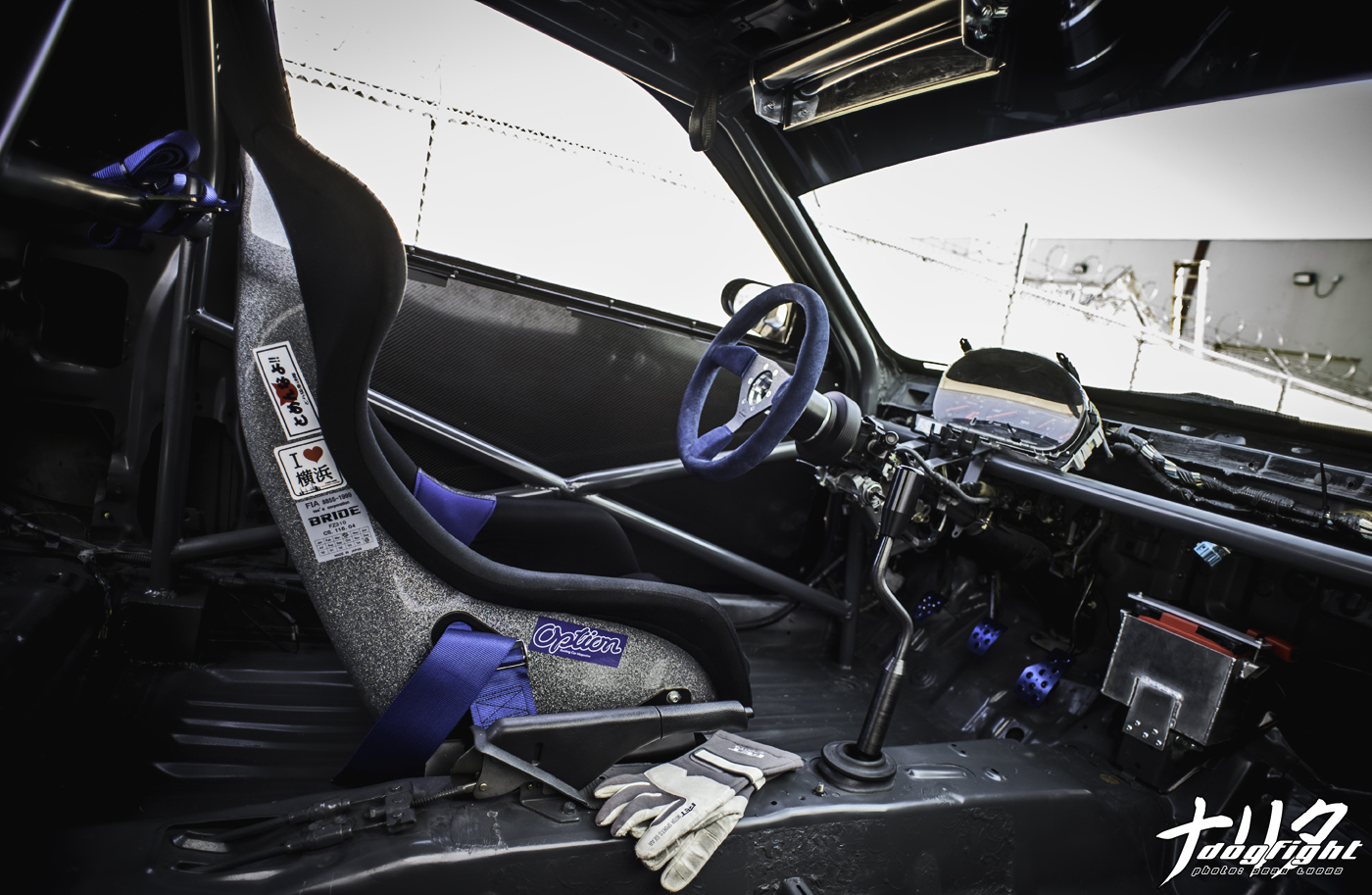 Some minor changes have been made to the interior I suppose as well.  The battery box is mounted where the SRS stuff used to be, but I’m thinking of extending the wires and mounting it behind the passenger area – not necessarily for balance, but so it’s a bit more out of the way – the battery only weighs like a pound (Mirai).  The dashboard is something I’m still considering ideas with, but more than likely it will be a simple carbon setup.  I’m pending conversations with an overseas company in regards to a cluster setup as well.  So, quite a few things on hold at the moment. 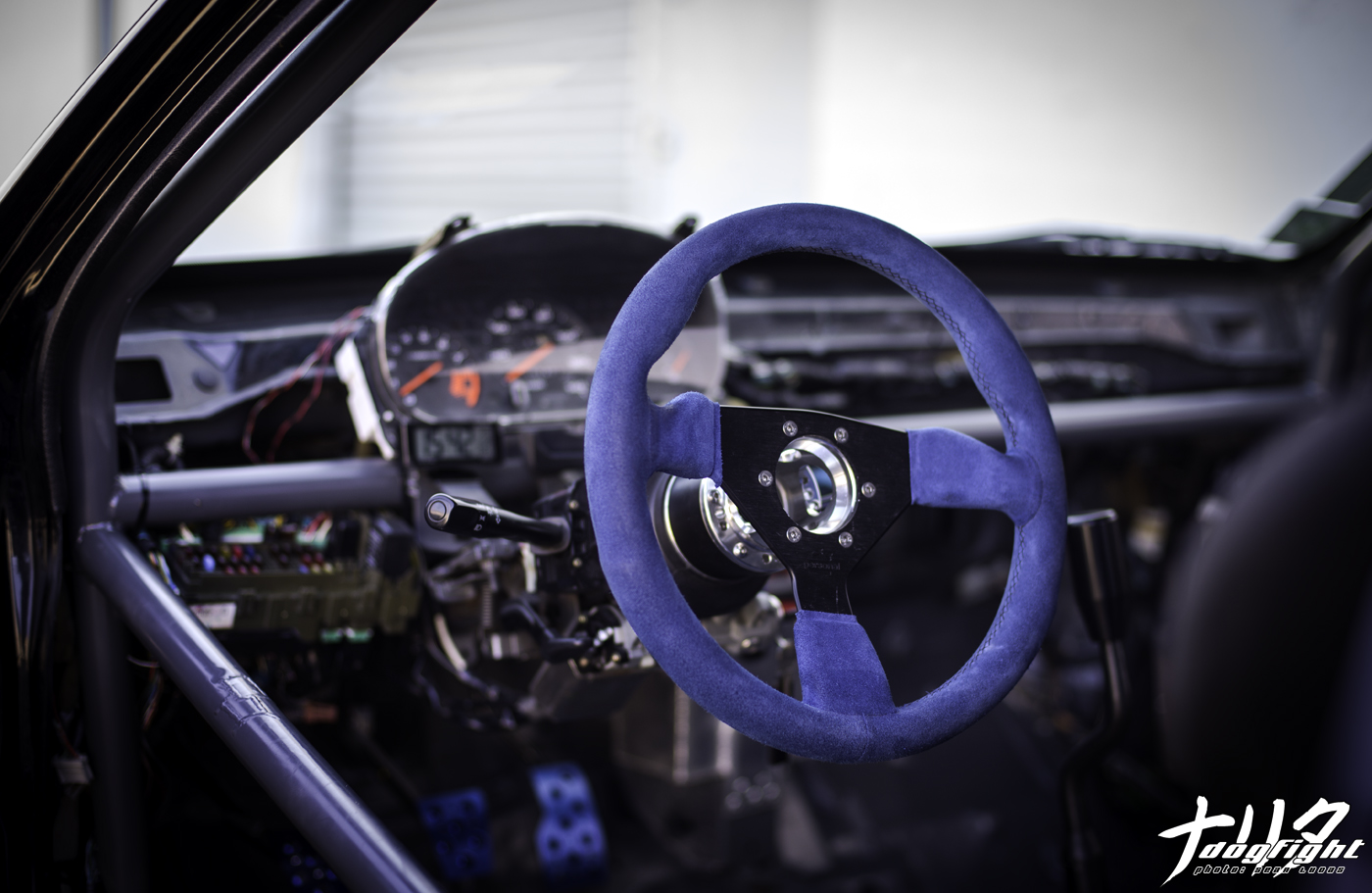 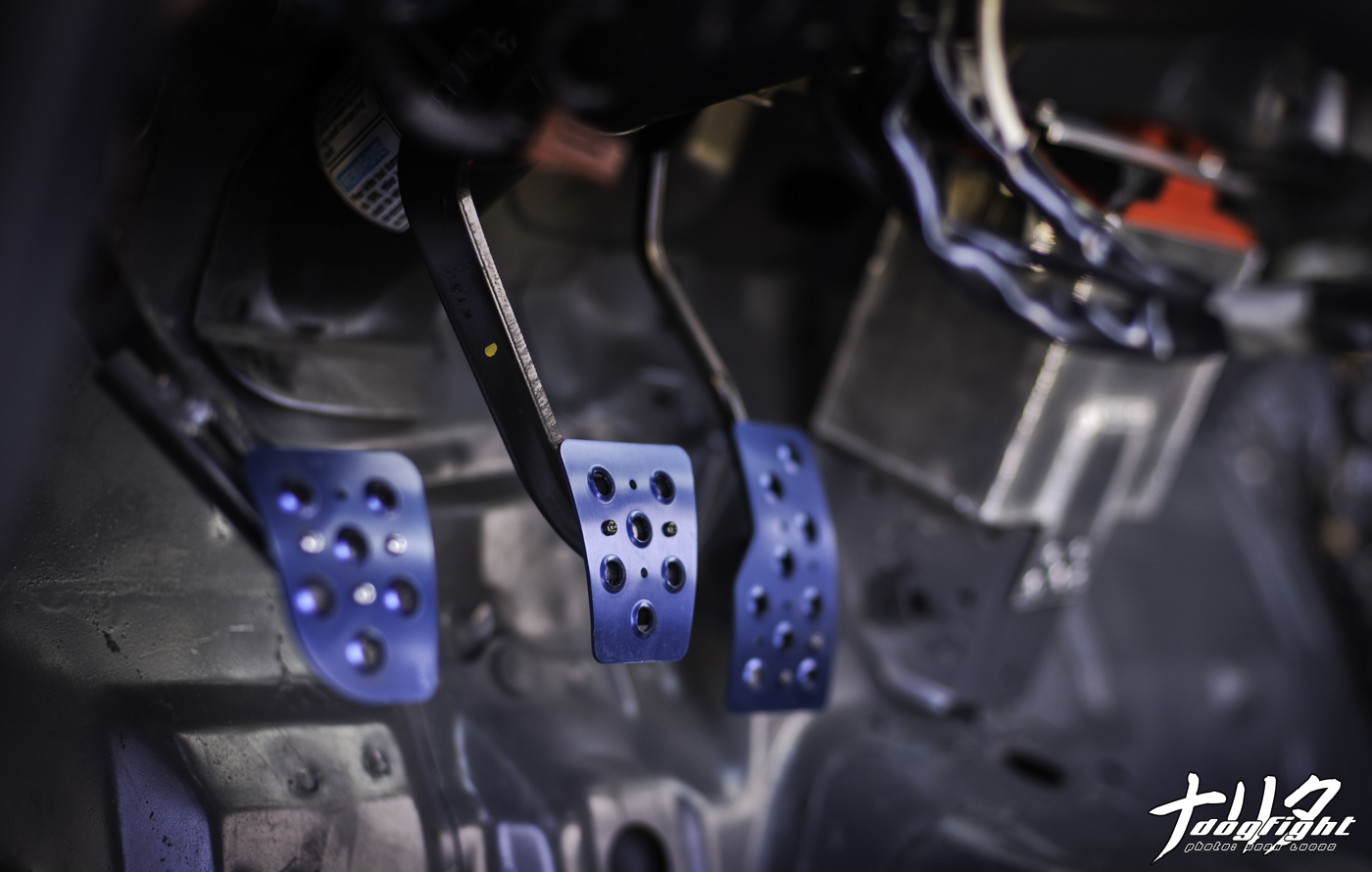 A set of DASH (Okuyama) blue anodized pedals replaced my old silver ones.  I picked these up at HKS Premium Day back in January.  They’re super light! 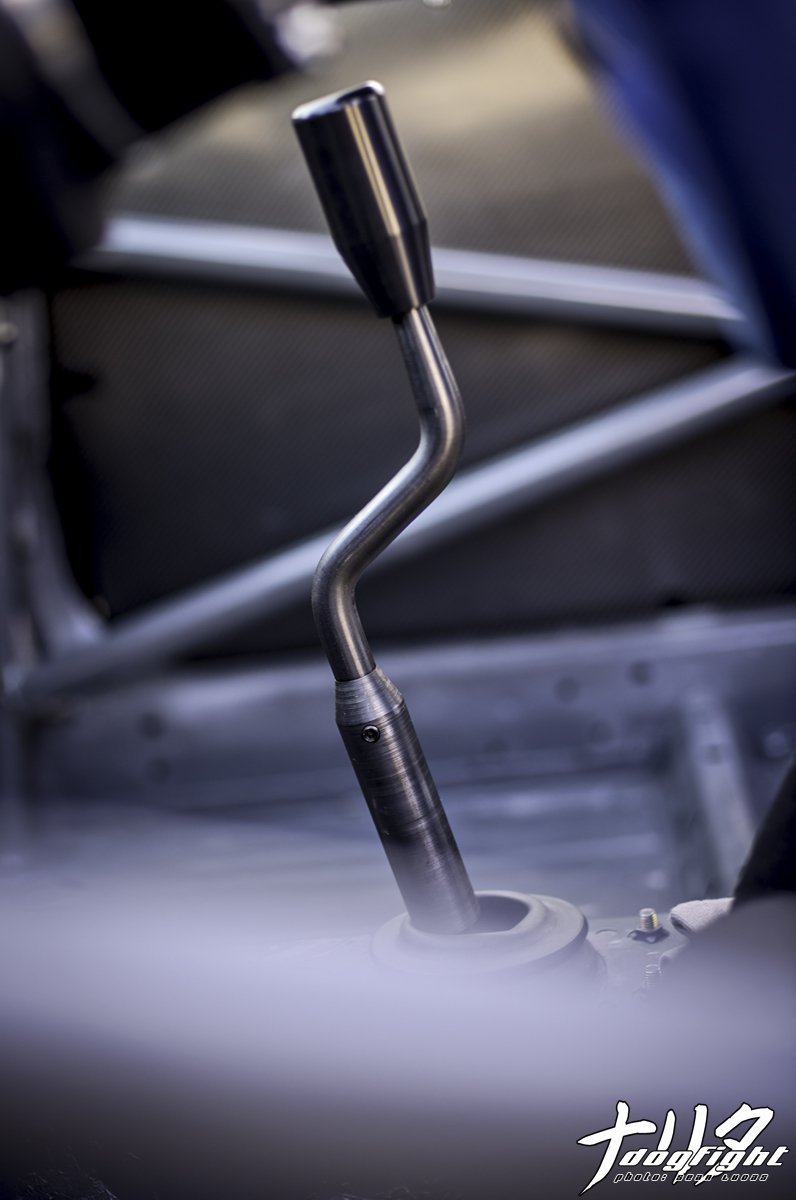 Still one of my favorite parts combos on the car – the Fastline shifter, and my Tomei knob. 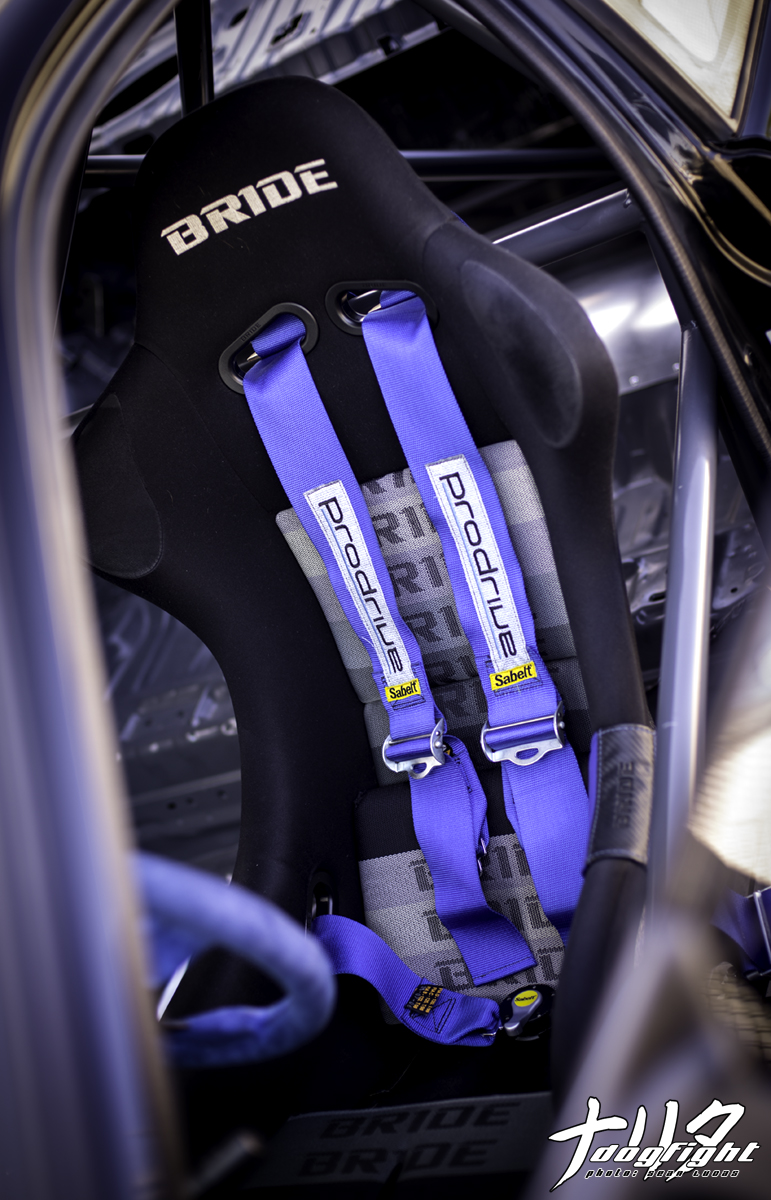 Got the Sabelt harness in as well. 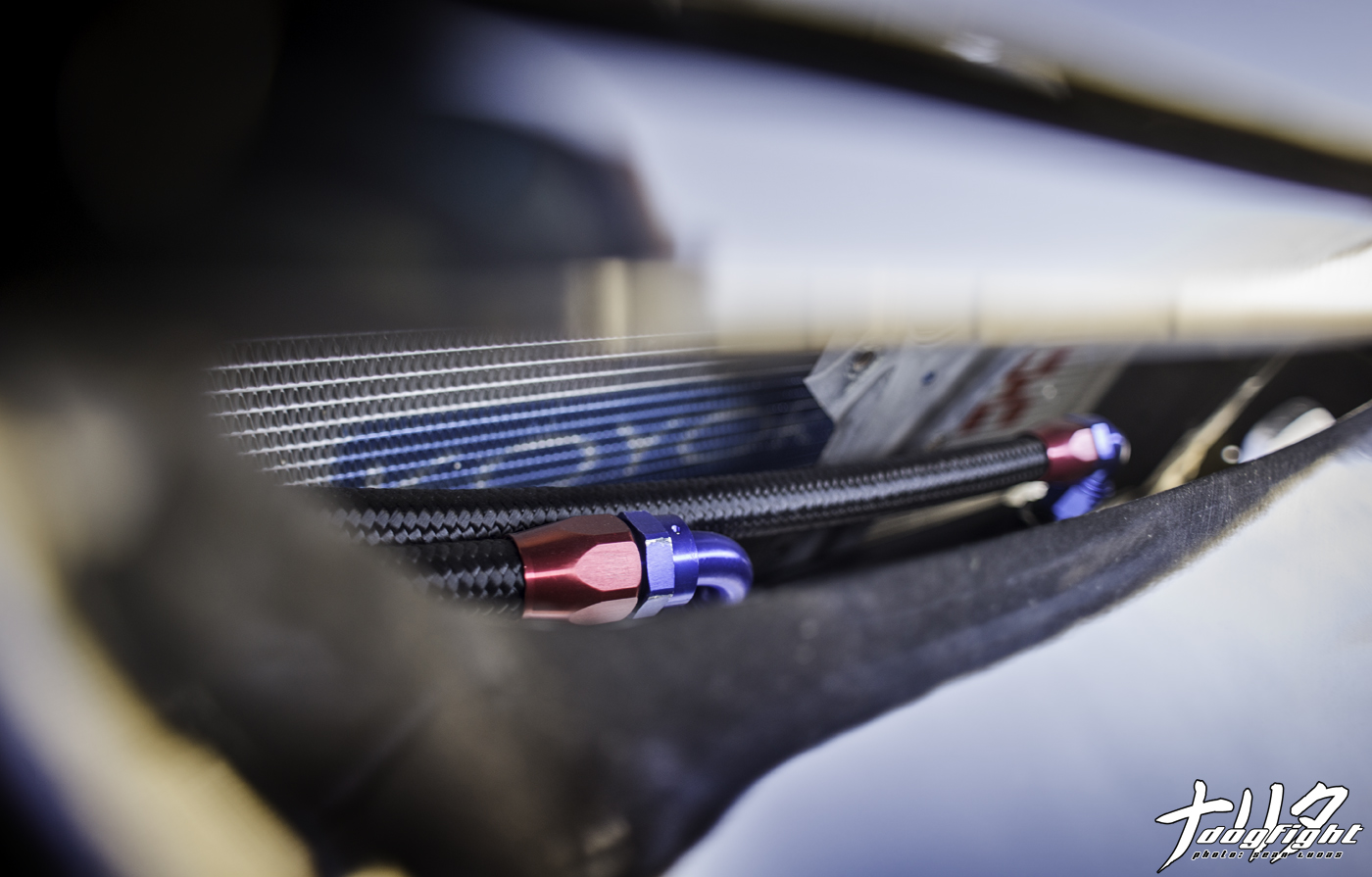 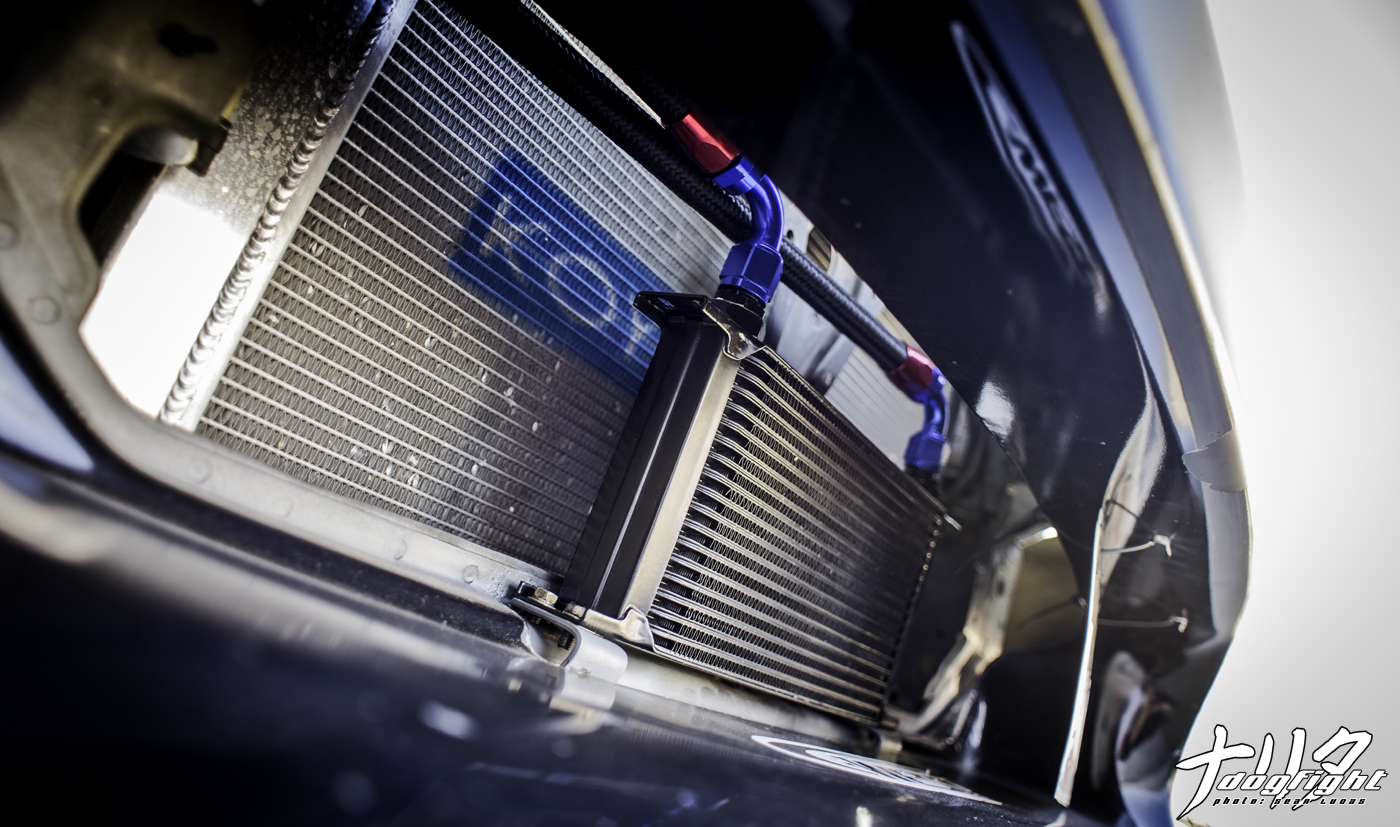 Another notable addition is the Koyorad 18 row oil cooler that I finally had time to plumb last month.  It was my first time making AN lines, and it went very well – in thanks to B-Love and Jay who showed me the ropes.  Everyone knows Koyorad radiators for their quality and performance, and I’m stoked to be able to apply that same quality to cooling the oil as well.  I haven’t talked to Scott in awhile, so I’m not sure if these are for sale yet.  The cores are nicer than a lot of comparable units I was looking into.

Battlecraft hood and aerocatch combo.  Driving back from West End on the 91, stuck in traffic, I’m glad I had this vented hood lol you could see the heat pouring out of the bay.  I should probably install a fan. 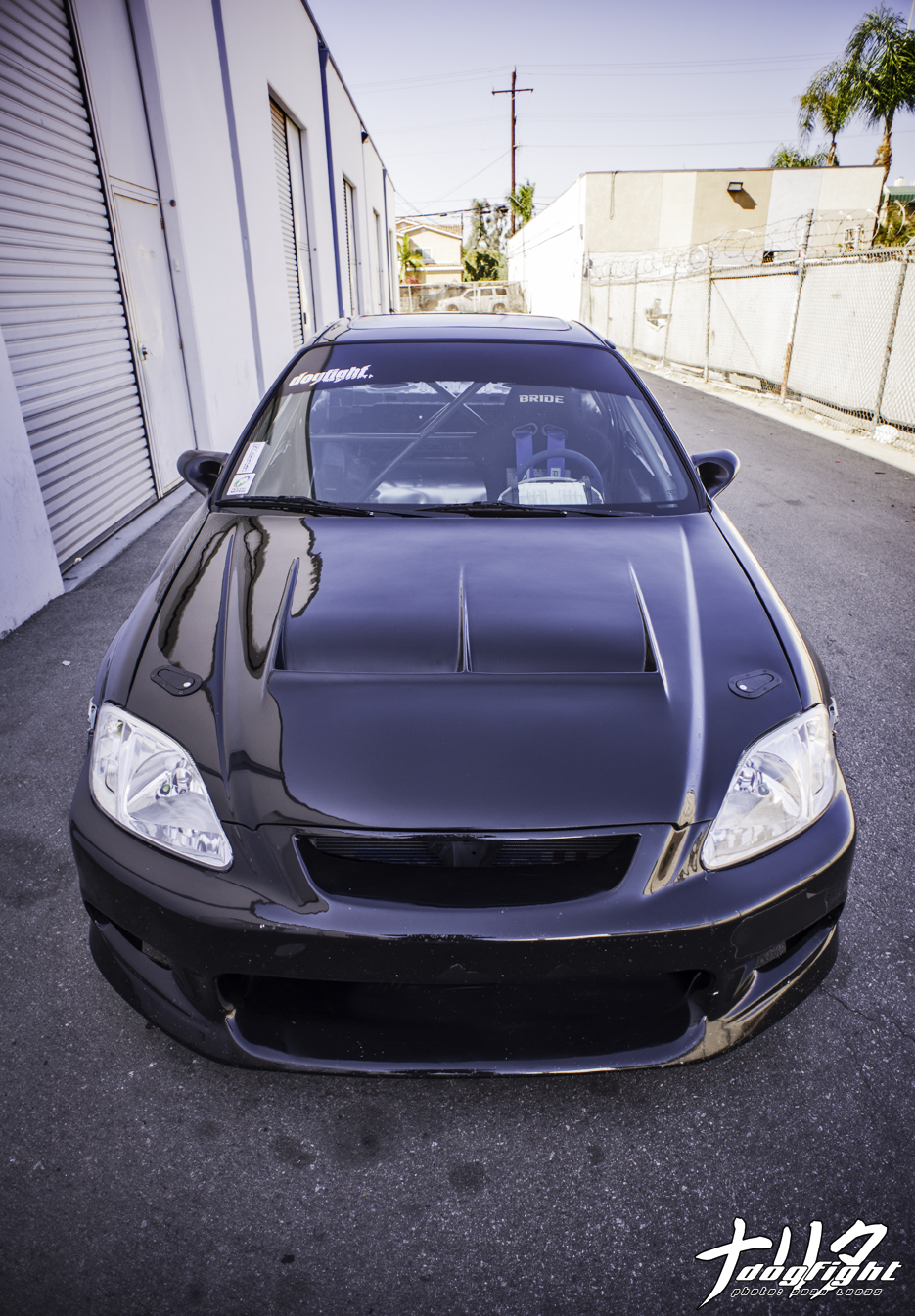 Not too much to mention on the front end yet.  Like I said, we’re in the middle of developing a few new parts. 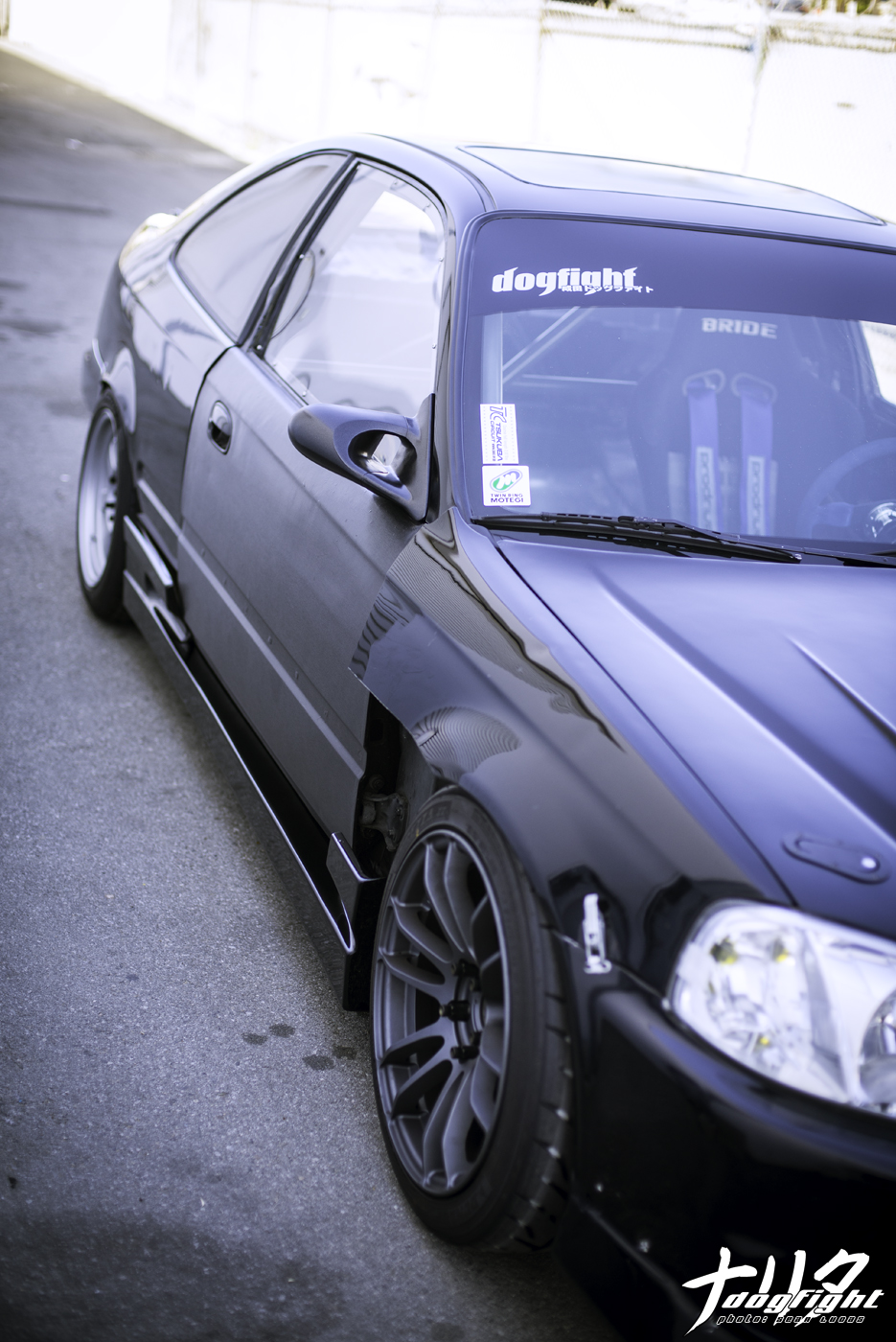 I really don’t know what to expect this weekend.  I’ve been out of the seat for a year now and am just looking forward to driving again.  I’ll gauge a proper goal after the first session, until then we’ll just see how it goes!