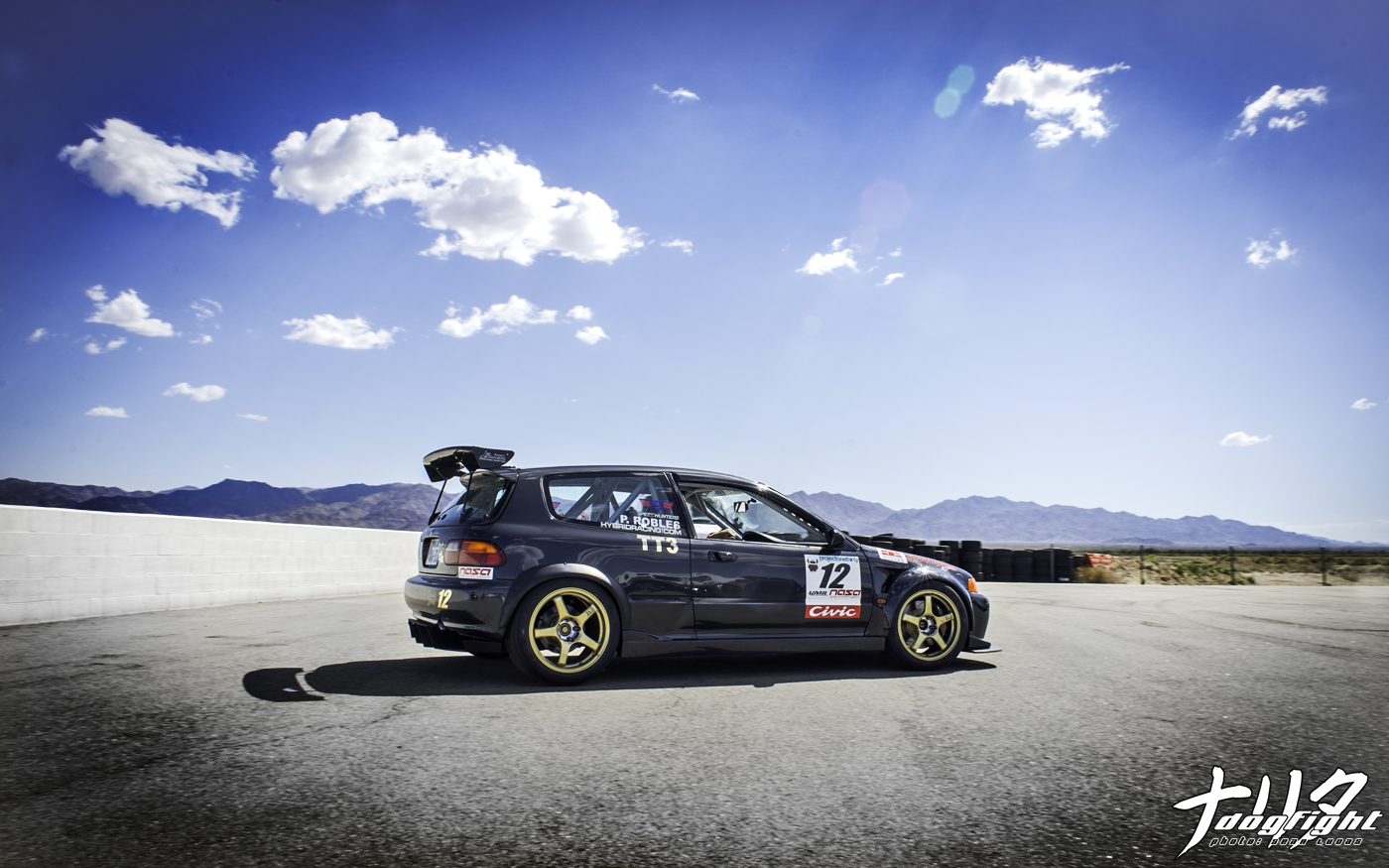 There’s something to say about the people around us who promote self-efficacy.

The capacity to unknowingly emanate a trait such as this is rare, and when you come across it you can’t help but be positively influenced.  Even a simple exchange of dialogue can have a major effect on the goals and beliefs you’re currently pursuing.  This is exactly the type of feeling I had when I had the opportunity to meet Philip Robles this past weekend.

Role models give us the inspiration and encouragement, often times unbeknownst to them, we sometimes need to better face our challenges.  Finding things improbable or ‘writing’ things off is a common problem we all encounter when feeling discouraged, or if we feel we’re facing our challenges alone.  This is why having role models, especially for the youth, is such an important aspect of growing up.  That being said, there is no age group that constraints this effect.  Philip is a clear example of this, as the people he effects are of all age groups.  Of course I’m speaking from personal experience, but many of my peers feel the same.  There’s a clear connection between what we’re doing in motor sport, and what Philip has done and is still doing at his age that gives us all something to aspire to. 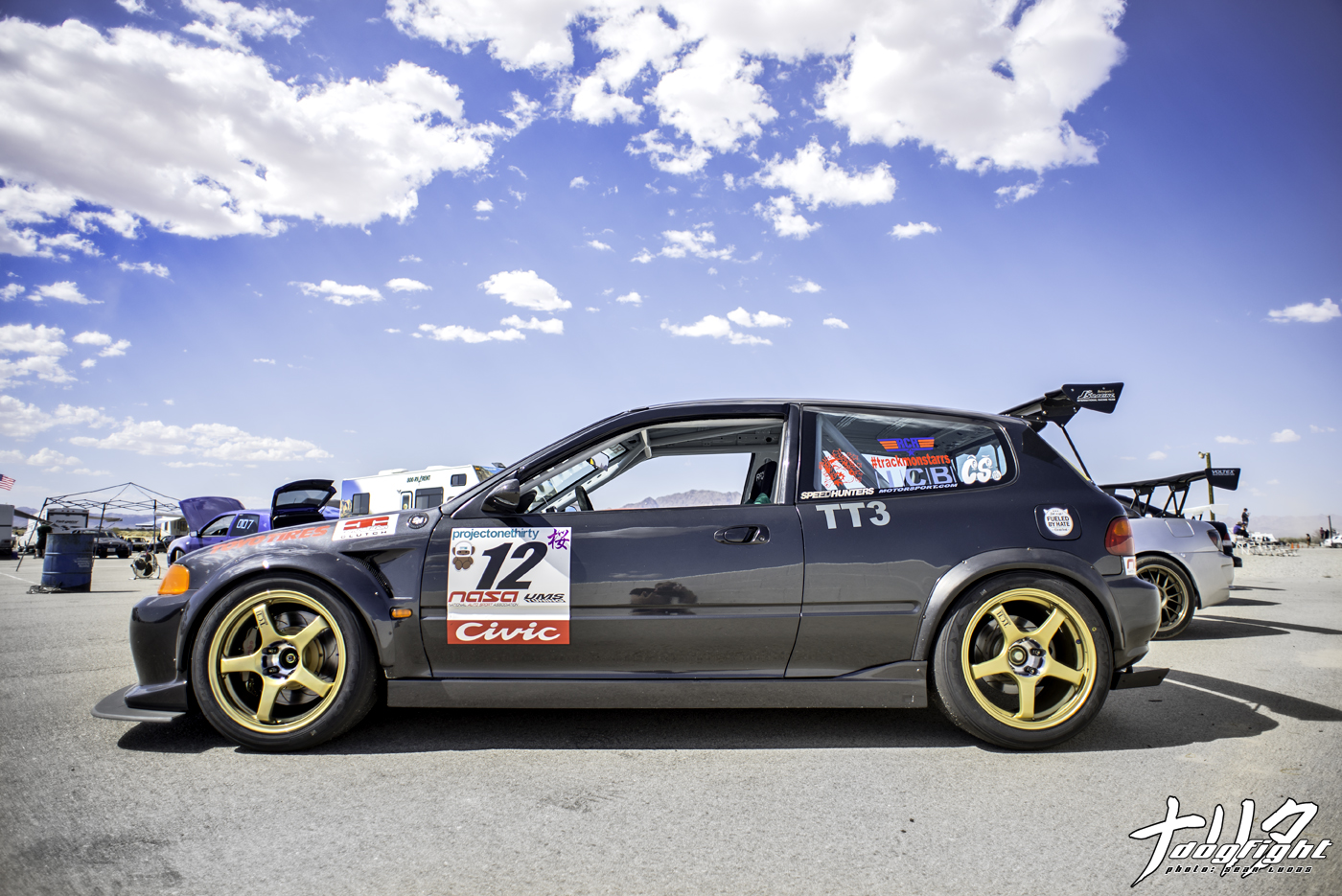 A role model for many, Philip has managed to embody, in entirety, the true enthusiast spirit.  When he’s not working on Boeing AH-64 Apache’s out in Mesa (which in itself is pretty bad ass), he’s competing regularly in NASA AZ, and events in Southern California.  The continuous work he’s put in on his EG has brought him to the point you see here; one of the most complete FF time attack builds in the country. 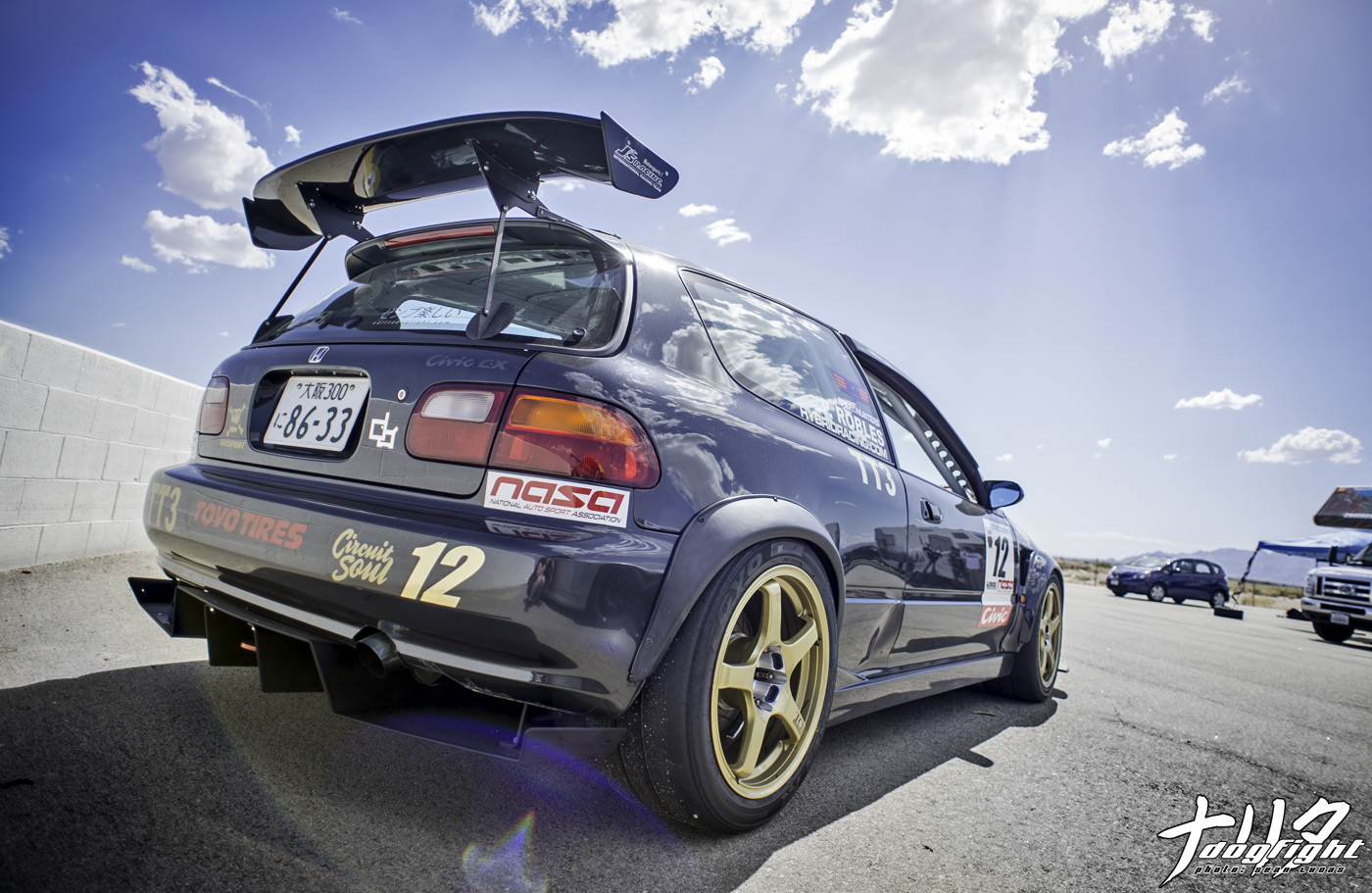 Combining aspects from both the US and Japan time attack scene, he’s managed to transform the petite hatchback that was once intended for commuting, into an extension of the circuit.  The exterior boasts modified J’s and Chargespeed flares in order to fit the large 255 series tires that now sit at all four corners. 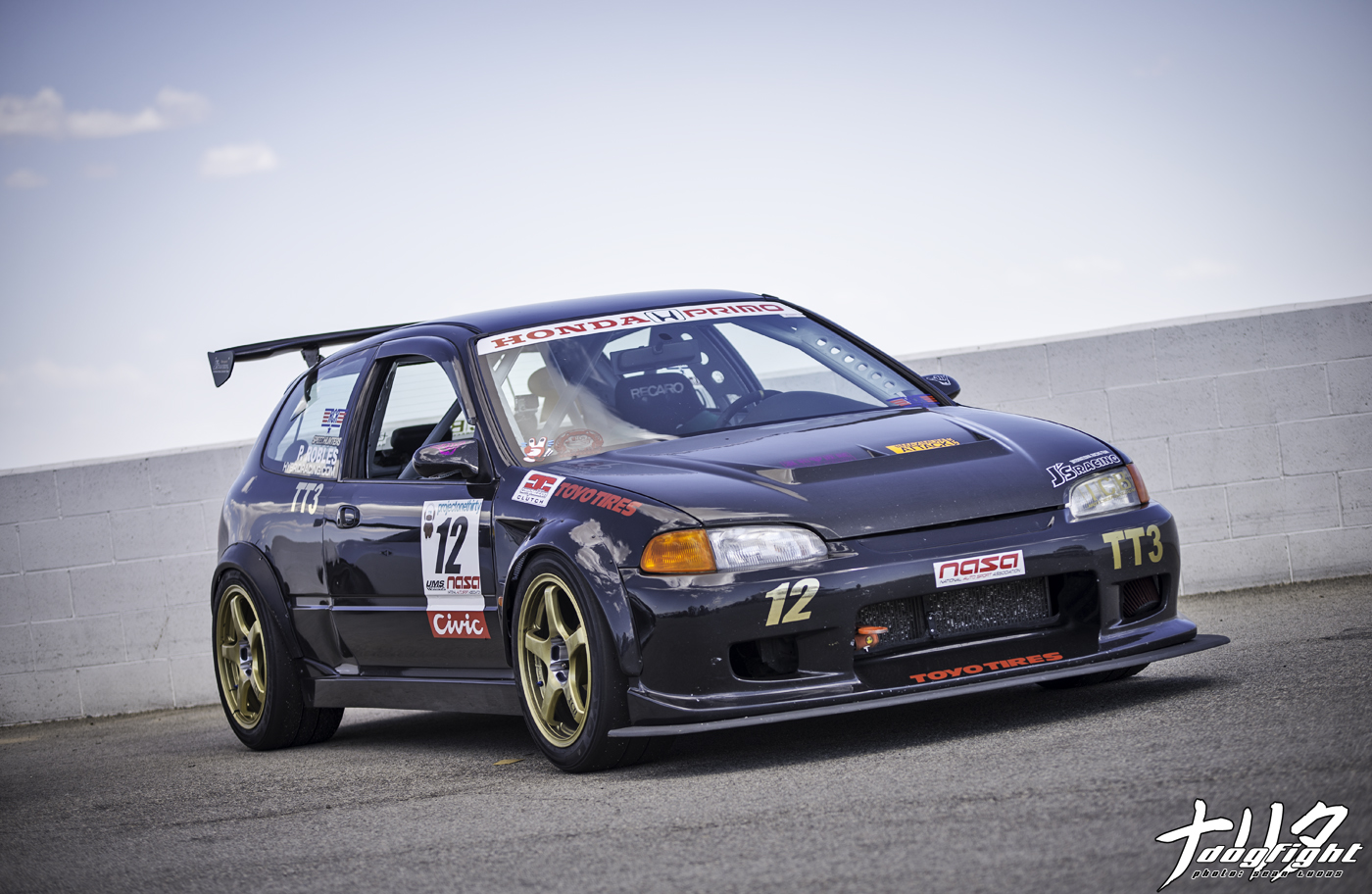 The result, combined with the other aero bits, is a rather menacing, but extremely functional look without going overboard. 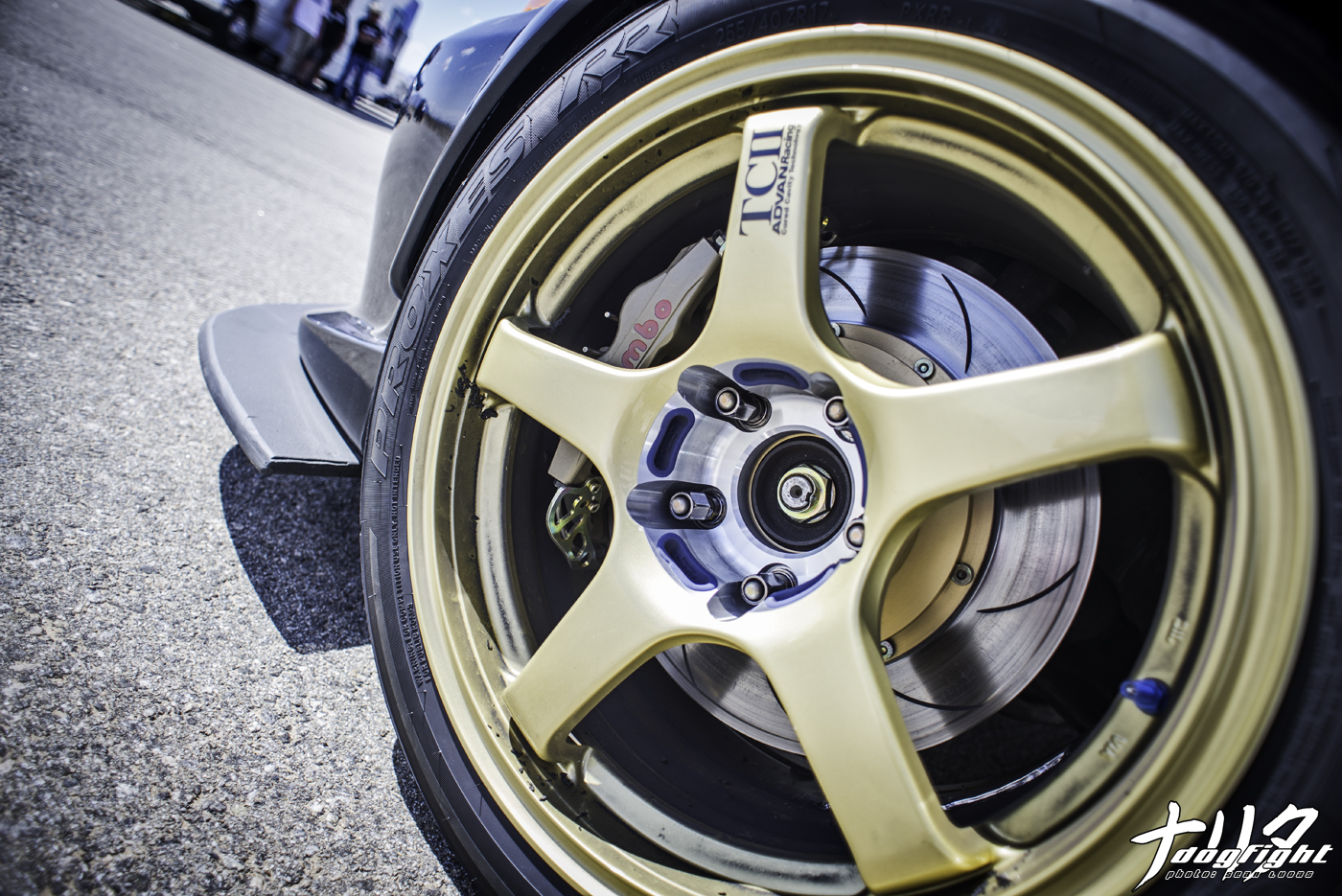 His newly acquired Advan TCII’s fit the car just as good, if not better than the red TE’s that were previously fitted.  The ‘Cored Cavity Technology’ of the TCII’s has been an aspect of the wheel I’ve always found interesting.  Utilizing hollow spokes, the wheel cuts even more unnecessary weight while still maintaining structural integrity.  The Brembo BBK ensures Philip hits his braking points at each corner. 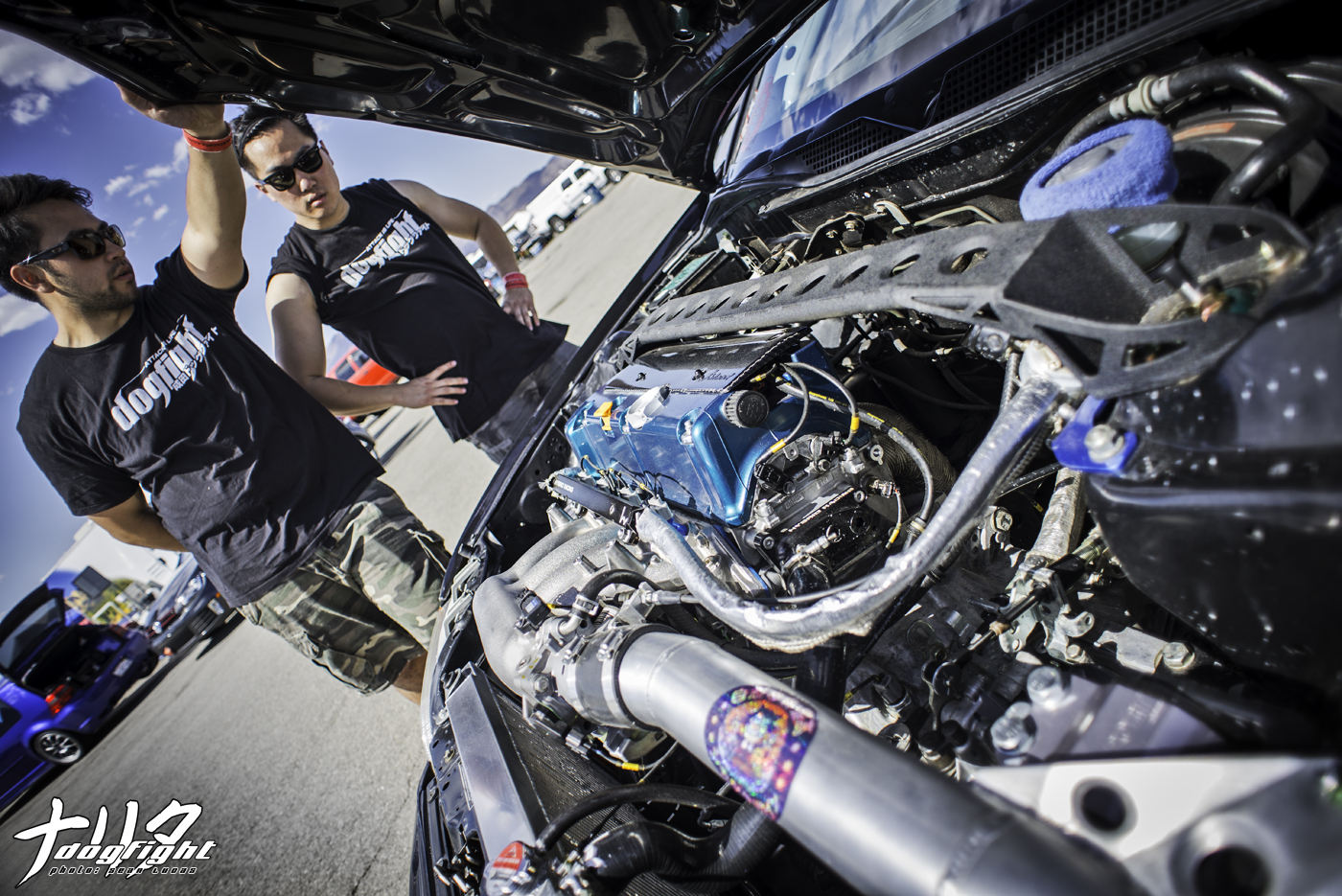 It’s a good thing he has them too, as his car is propelled around the track by a K24.  While the internals remain stock, the ancillary modifications put to work make the car an extremely fordable opponent on track; especially when paired with Philip’s talent behind the wheel. 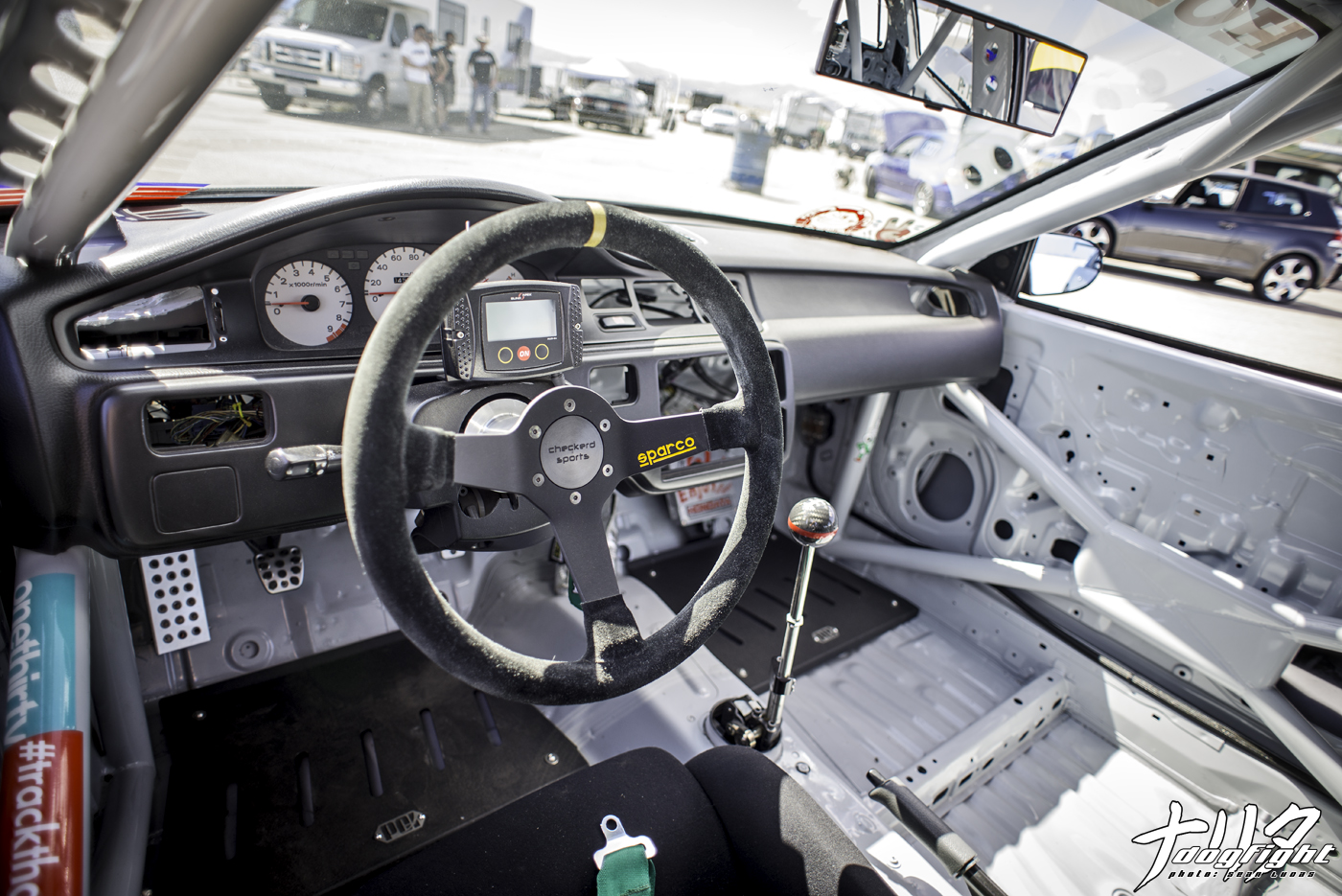 Only the bare essentials remain inside the EG.  After being gutted, a custom roll cage, complete with gusseted door bars, and roof bars, was welded in and the whole inside was resprayed.  The gutted dash houses the OEM cluster, and a suede Sparco wheel addresses the handling. 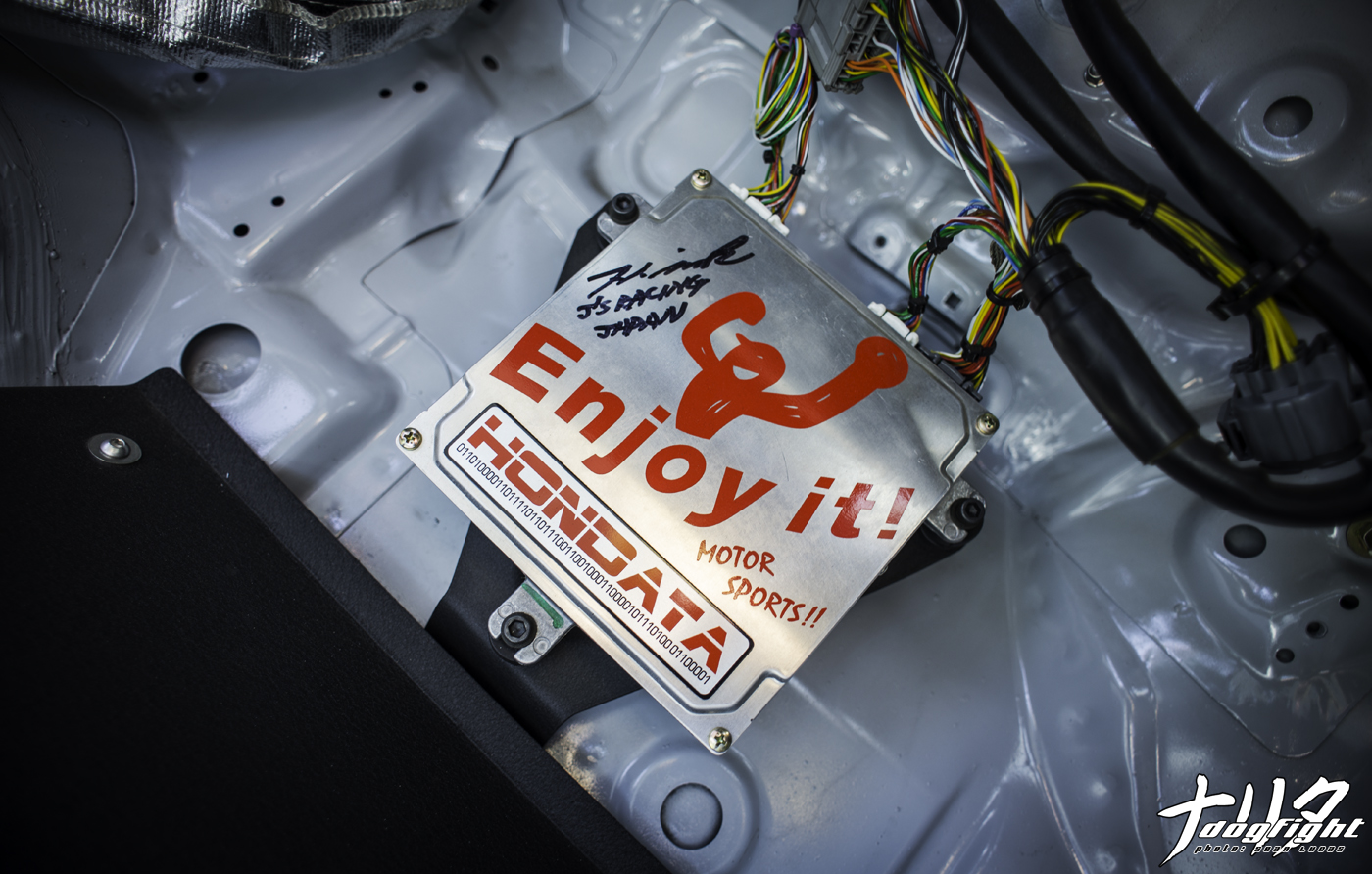 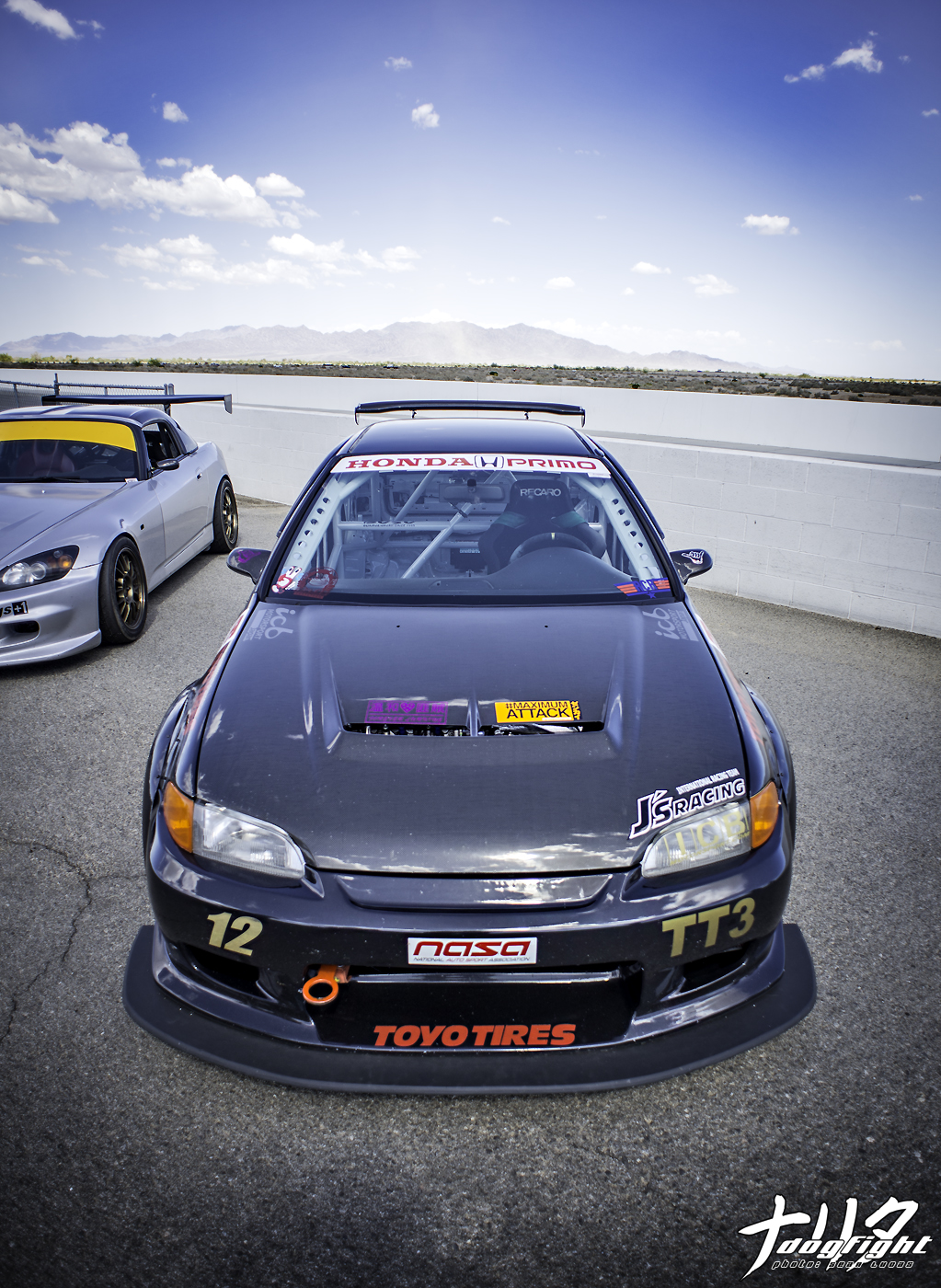 There’s no doubting that this car is quite amazing.  Not only is it quick, but it looks great as well; something that’s often overlooked on this side of the Pacific.  That alone might be enough for some to commend Philip, but it takes a man to build the machine, and this car is nothing more than an extension of who Philip is.  That to me, is some who just simply ‘gets it’.

Beyond thrilled I got to meet Philip this past weekend, and I look forward to many more events with him.  Hopefully both here in California, and out in Arizona some day. 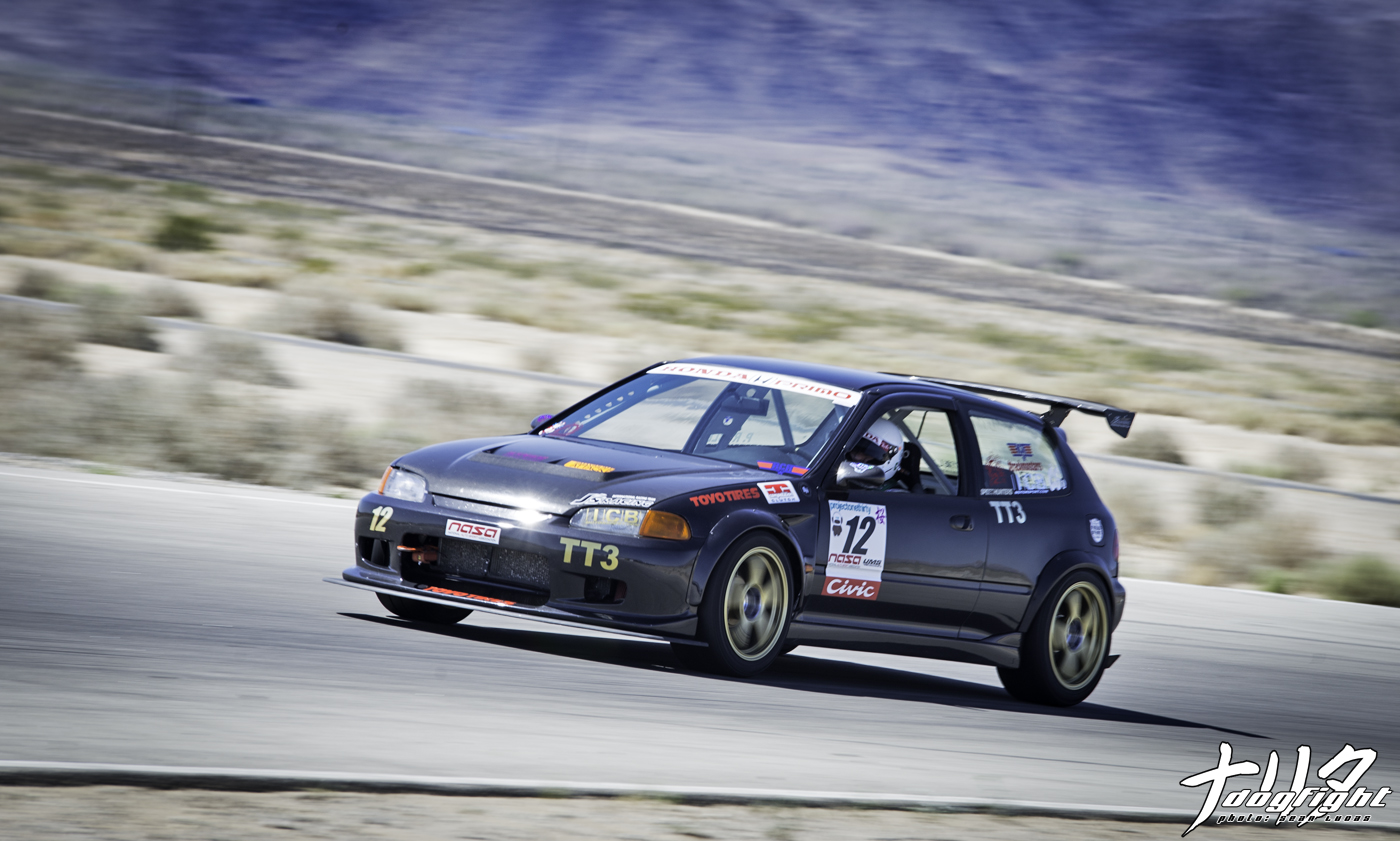 Which shouldn’t be too difficult – with his retirement coming up, I can only imagine he’ll be coming out to more events than he already does.