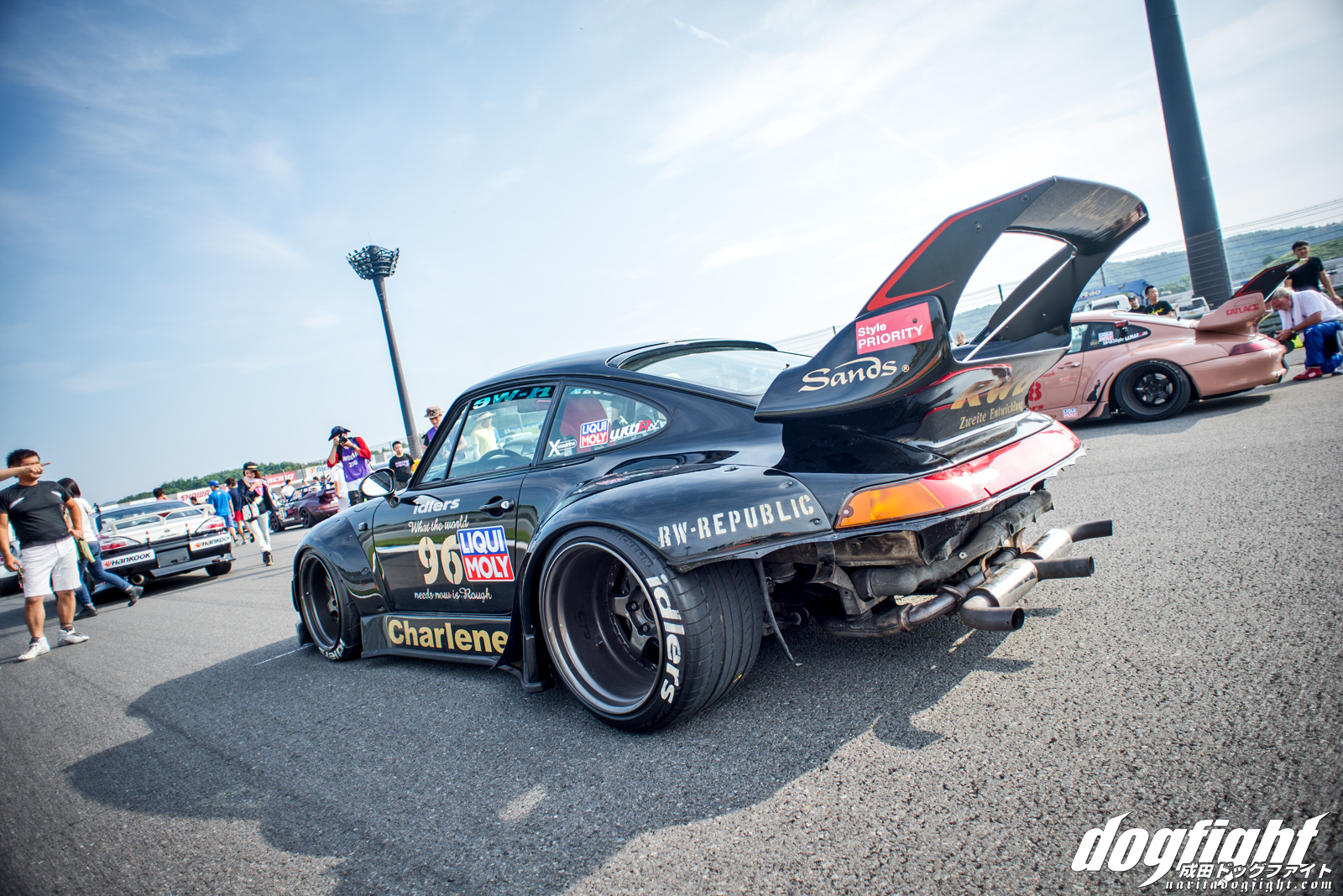 Two weeks ago I made the not-so bad flight (I was lucky enough to snag a first class seat, so I slept the entire way) across the Pacific to Japan.  I would once again be driving with the RWB team in the Idlers 12 hour Enduro at Twin Ring Motegi.  This would be my second, non-consecutive, time both driving and photographing the event.  It had been 5 months since I was last in Japan covering Evome, and in all honesty I wouldn’t have been back until Winter if it wasn’t for this event.  The relationship that RWB has with Idlers and the people involved in both organizations are the key reason behind this event being so fun, not to mention well organized.  Aside from driving Porsche’s around Motegi (not sure I need any other reason), seeing the international involvement is reason enough to go.  Reuniting with people from all across the globe, and putting faces to names, is what makes this event so special to me.

Due to some unforeseen hold ups we had arrived to Kashiwa rather late in the evening.  Sekinei was nice enough to lend me one of his Z32’s to drive out there with, as he had some work to take care of back in Yokohama and wouldn’t be able to make it.  So literally, as soon as I parked at the neighboring convenience store, we were packed into one of the Porsches ready to take off to the track.  Just as we did the previous year, we all joined at the Mini Stop and planned out the caravan to Motegi.  We grabbed our gear and I hopped into the passenger seat of the purple 964 with Gary, who was back in Japan from Ireland for his fourth Idlers event.  Unfortunately you won’t be seeing any photos from my perspective at this point.  I didn’t have my tripod, it was incredibly dark, and to be honest I was still trying to catch up from the day mentally that I wasn’t really in the mood for documentation of any sort.  I was just glad to be headed to Motegi.  Actually, here, if you want to see some lead up to this point, check out Gary’s blog.  He sheds some light on the goings-on before the caravan, including when one of our exhaust pipes broke off when we hit the biggest dip in Japan, and almost went through the windshield of Charlene, the Porsche behind us.  You can see in the picture below, Nakai just ended up ripping the other pipe off. 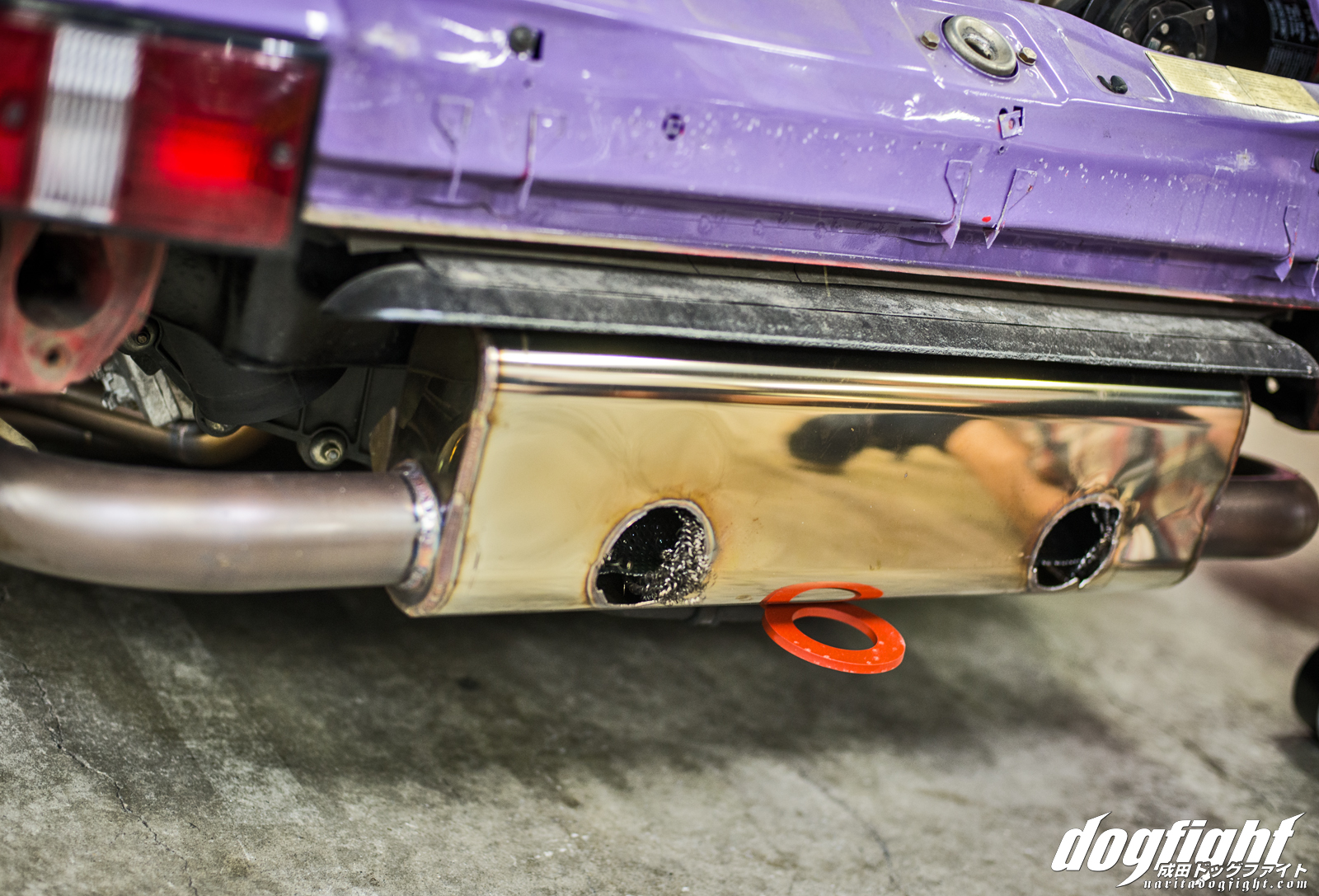 The drive to Motegi was pretty routine, and by routine I mean it consisted of the mandatory stop at Moriya parking area, and about half a dozen RWB Porsches jockeying for position on the expressway.  Since we were a little bit liberal with the speed limit, we ended up arriving at Motegi quite early.  It was about 2am when we reached the gates, and typically they open around 230.  We spent the extra 30 minutes stretching our legs, and chatting about the drive up.  When the gates opened, we made our way into the circuit paddock.  This is the first year I think they let us actually drive the cars into the garage area.  Last time I was there we had to kill the engine and push them…not sure what changed. 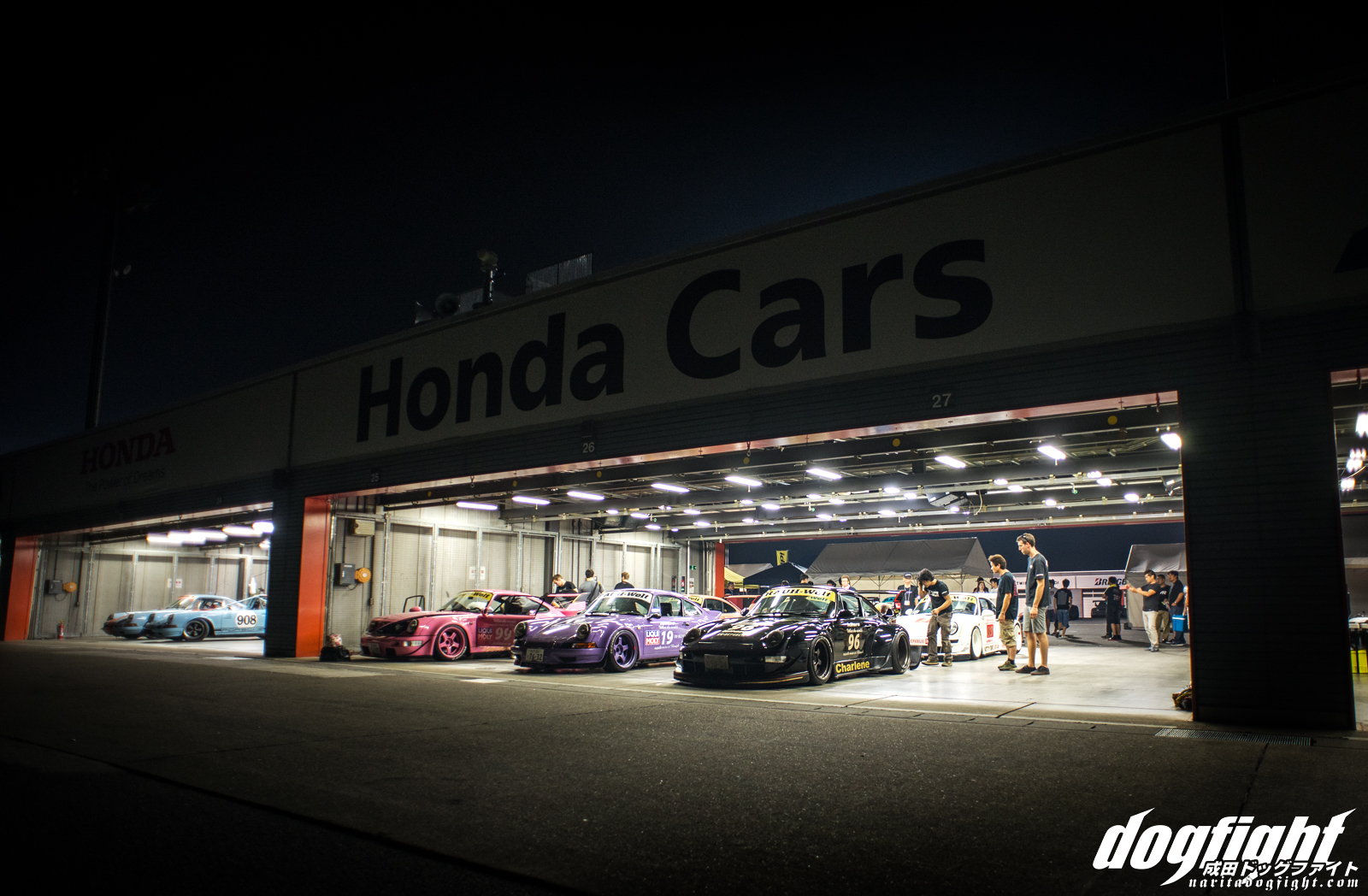 After we had arrived at Motegi and the cars were prepped for the race, I felt a little tension release from my mind.  Not sure what the deal was, but I had a lot on my mind leading up to that point.  It was a relief as I was able to focus on the coming race and was able to enjoy the entire day from that point.  It’s not often I’m ‘present’ all the time, and I have a horrible habit of thinking of the future way too often; so much so that it affects how I act in the moment.  Thankfully that wasn’t the case from that point on, and I was really able to live in the current for the entire day.  The existential thoughts that usually keep me floating above myself were non-existent, and I really think it had to do with present company…and the fact that I was on the race track; one of the few places I can find solace. 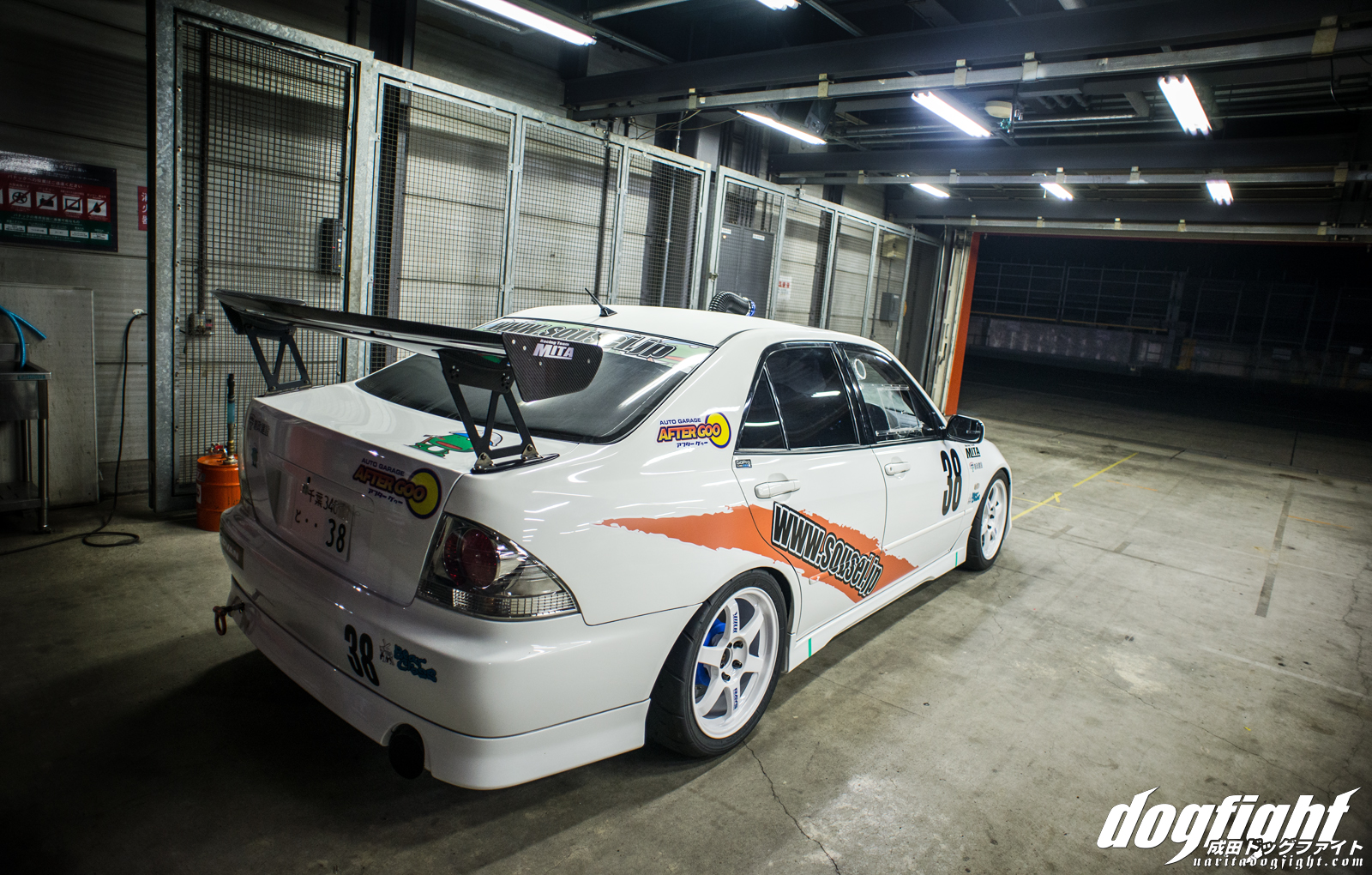 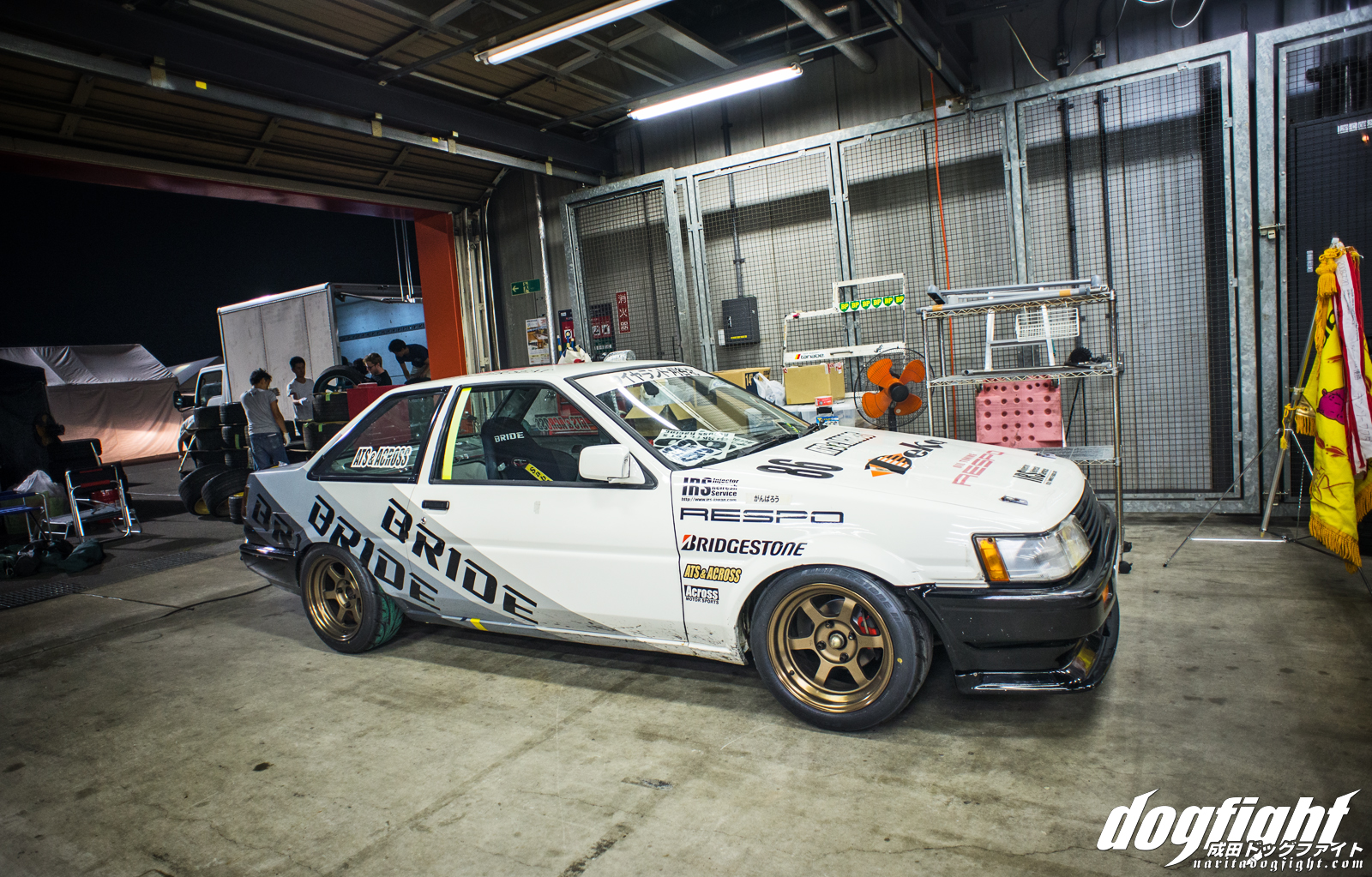 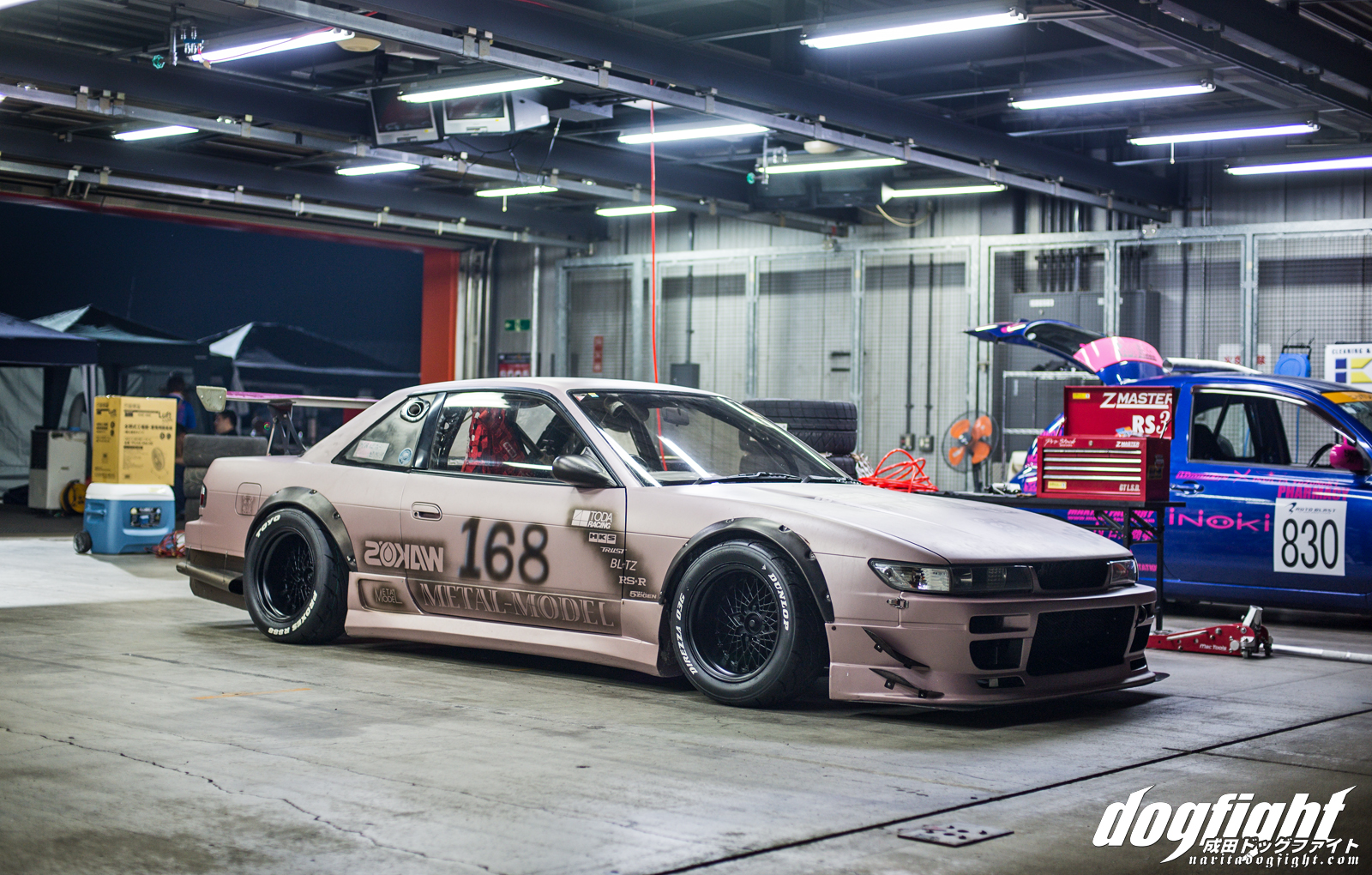 Since we got there early there was quite a bit of time to kill before the mandatory drivers meeting, so we wandered around a bit and checked out the cars.  Like I’ve said before, Idlers has an enormous amount of variety and strolling through the paddocks you’re treated to an array of different cars.  You can see more of that Silvia here. 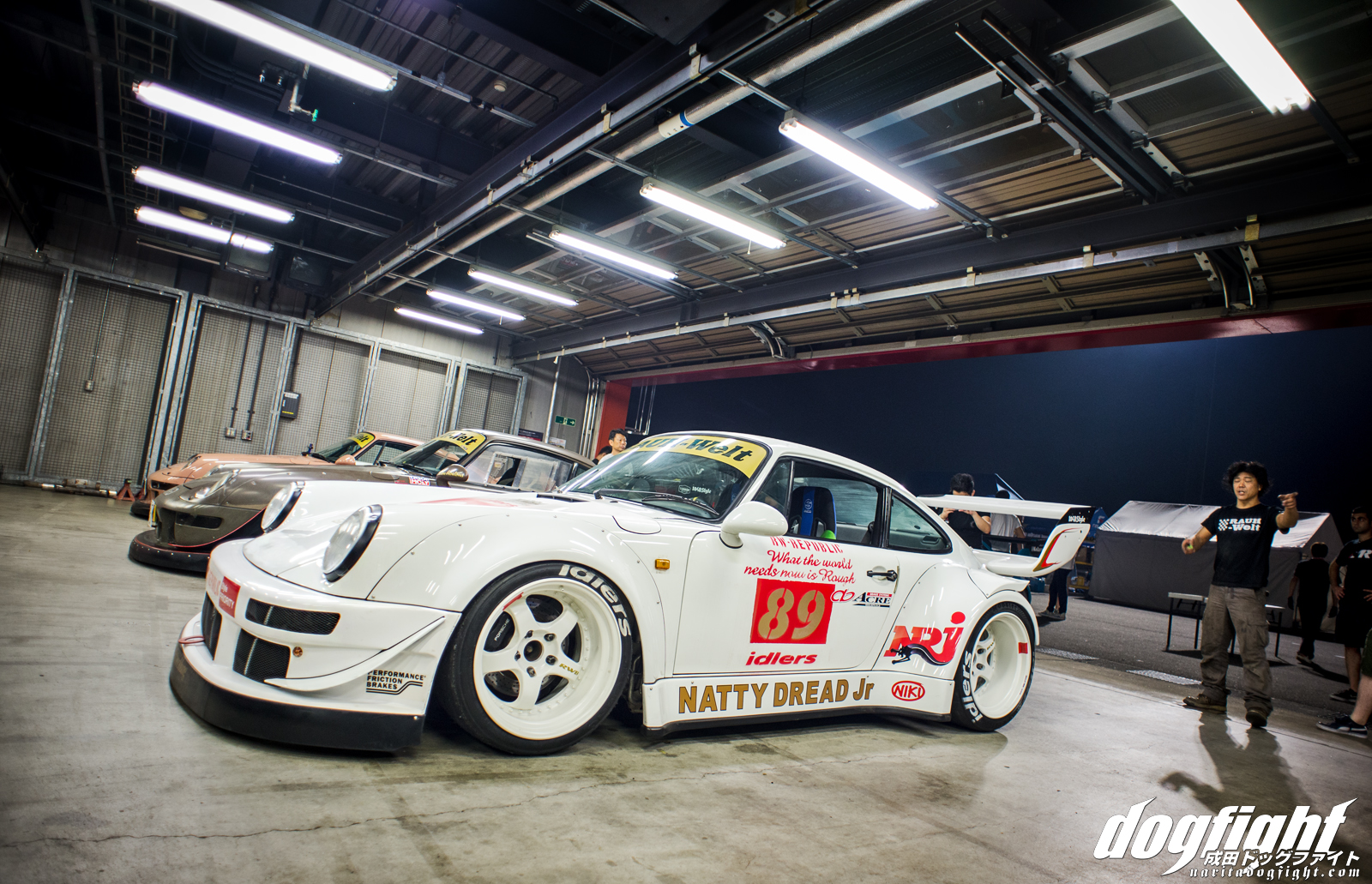 The team garage was abuzz with activity in prepping the cars, as well as taking care of all the ancillary duties that come along with a 12 hour race. 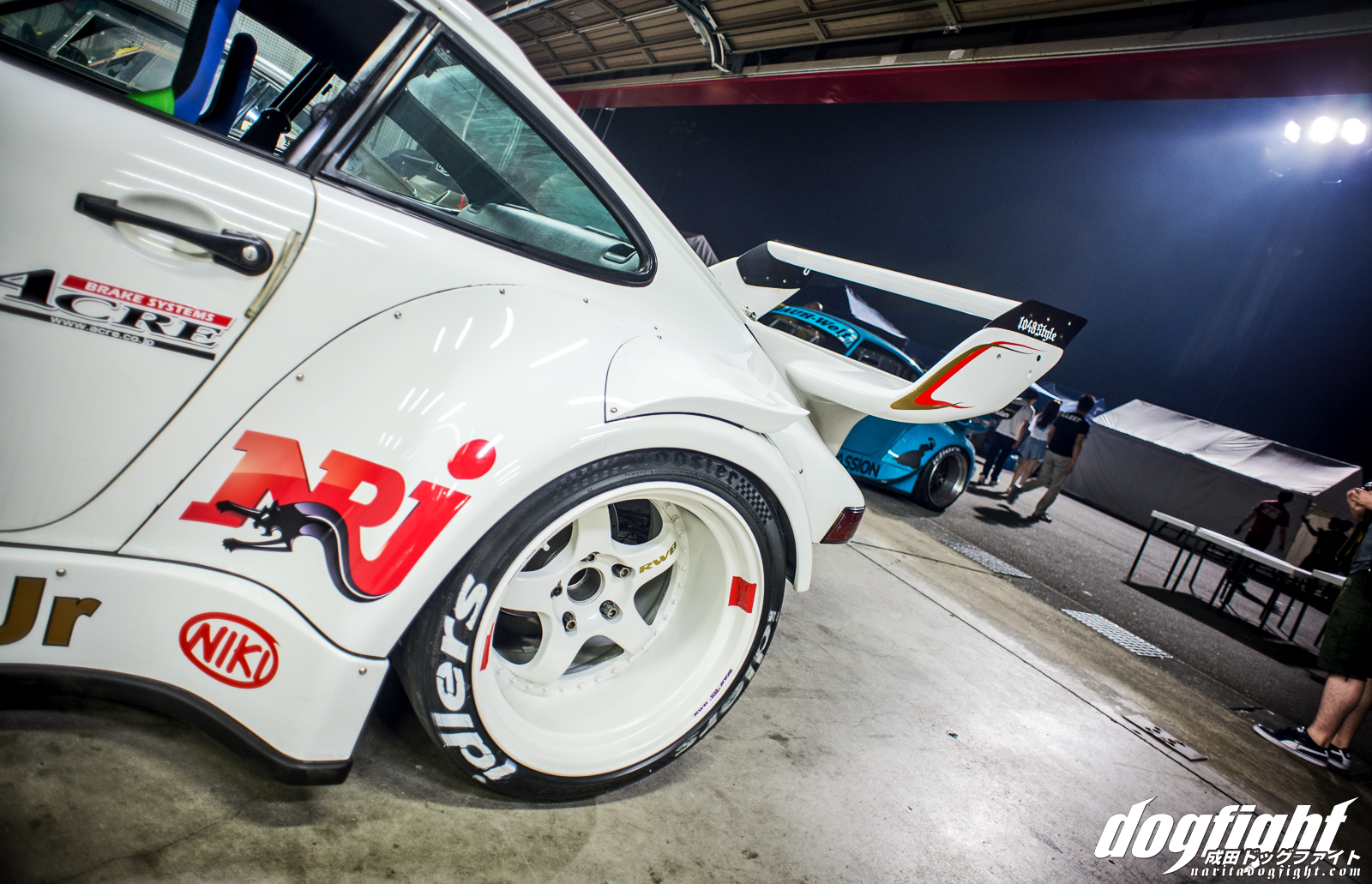 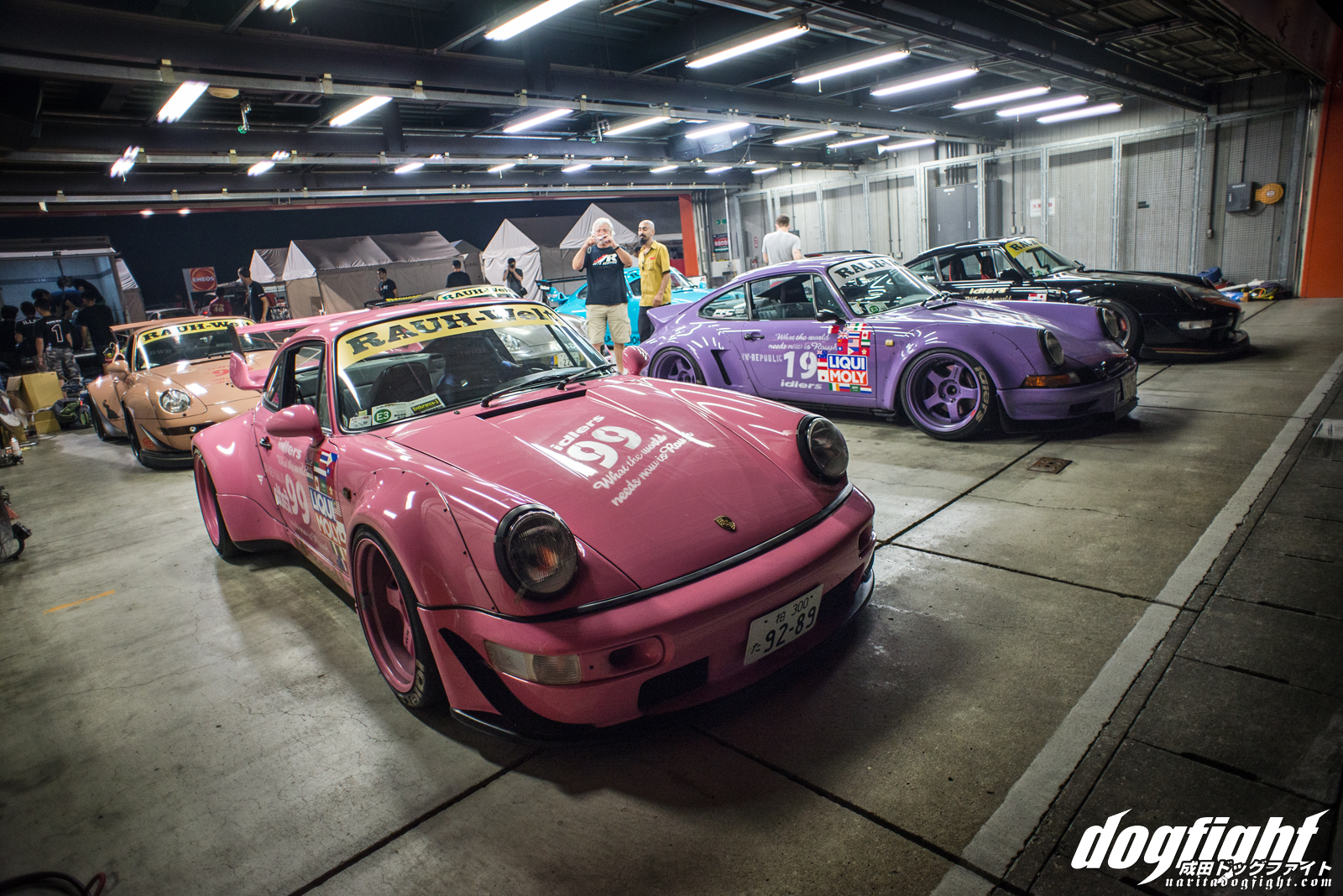 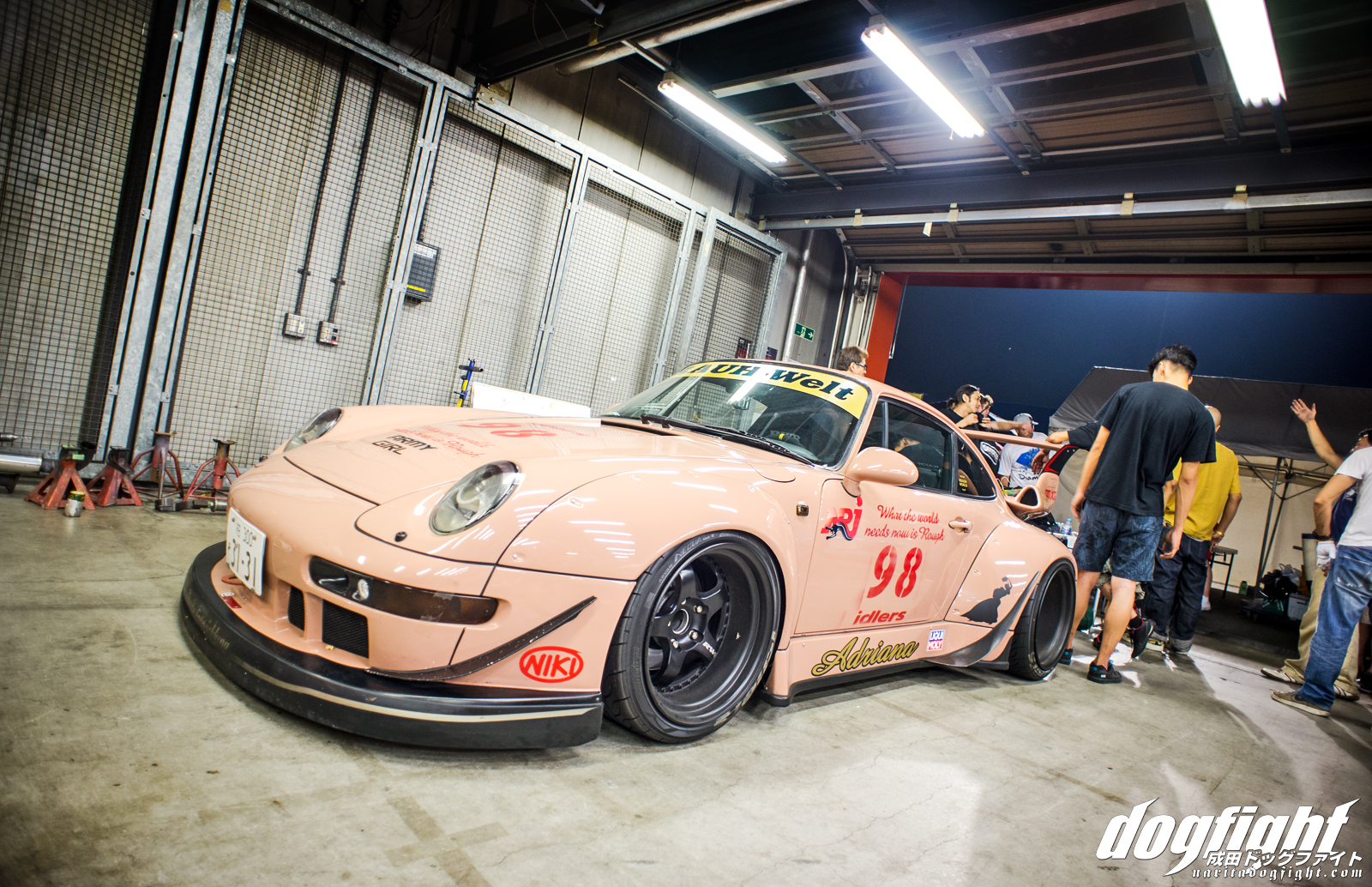 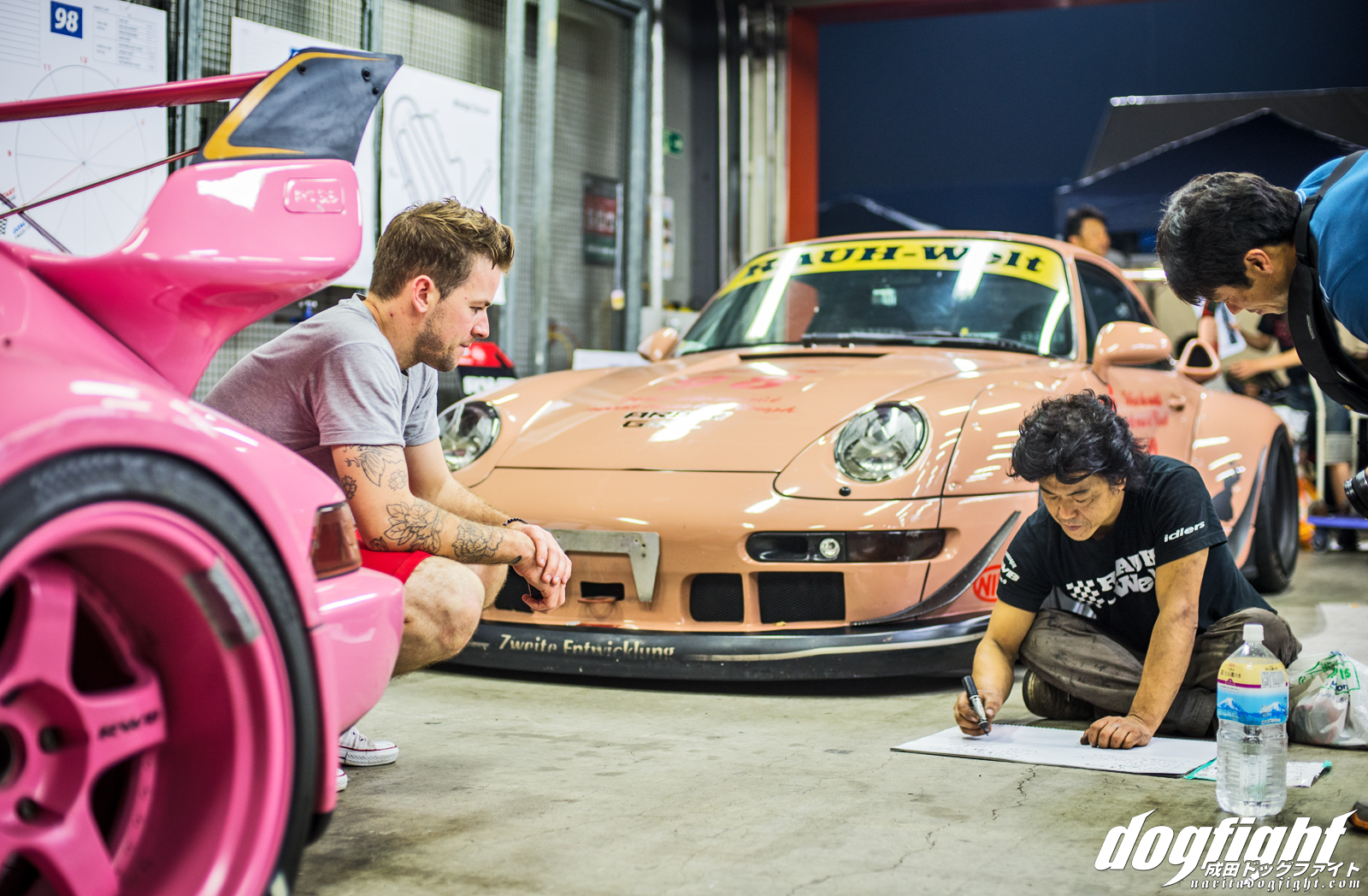 Nakai was writing down the general rules of the race in English and Japanese for everyone to reference. 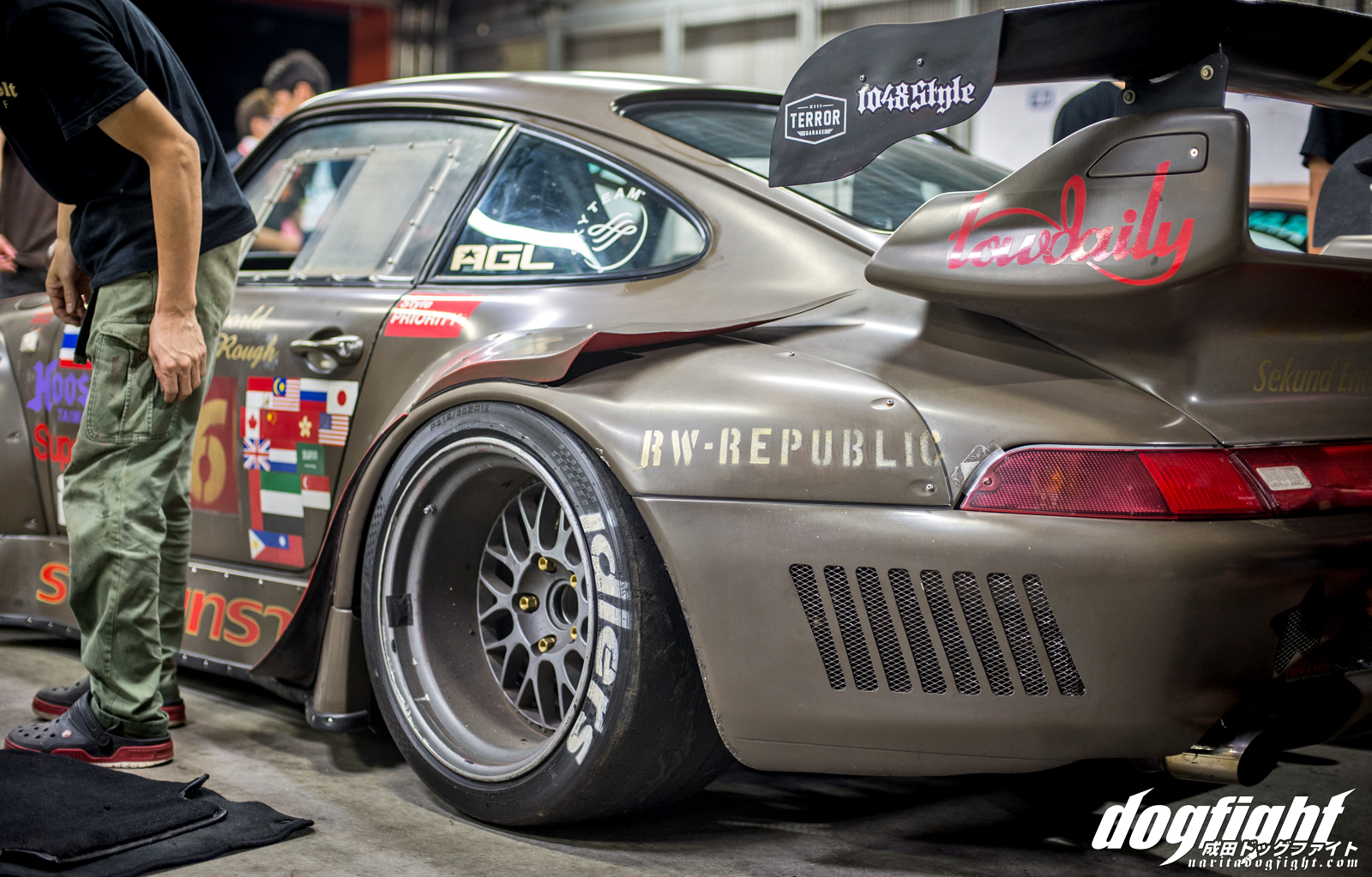 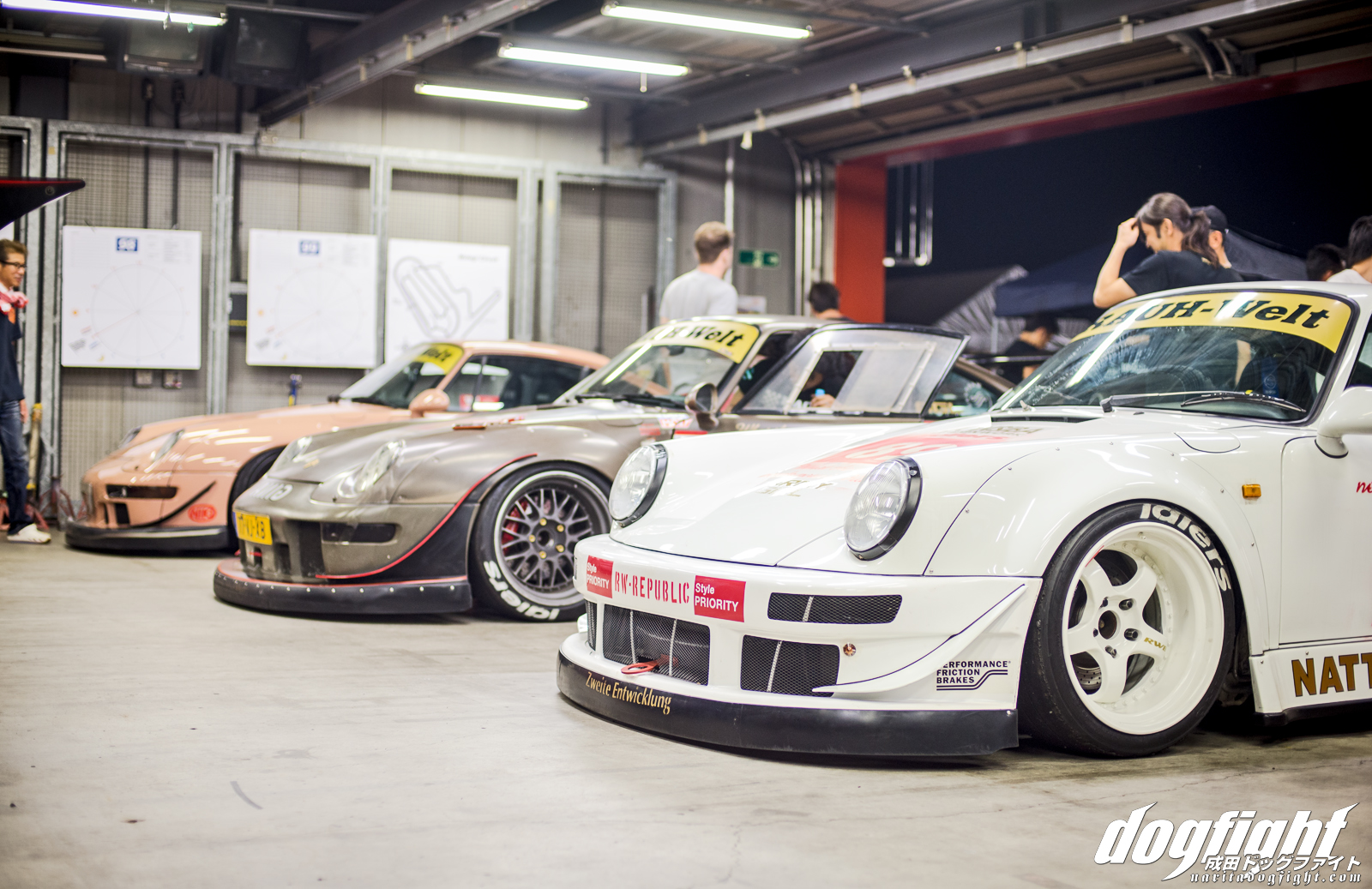 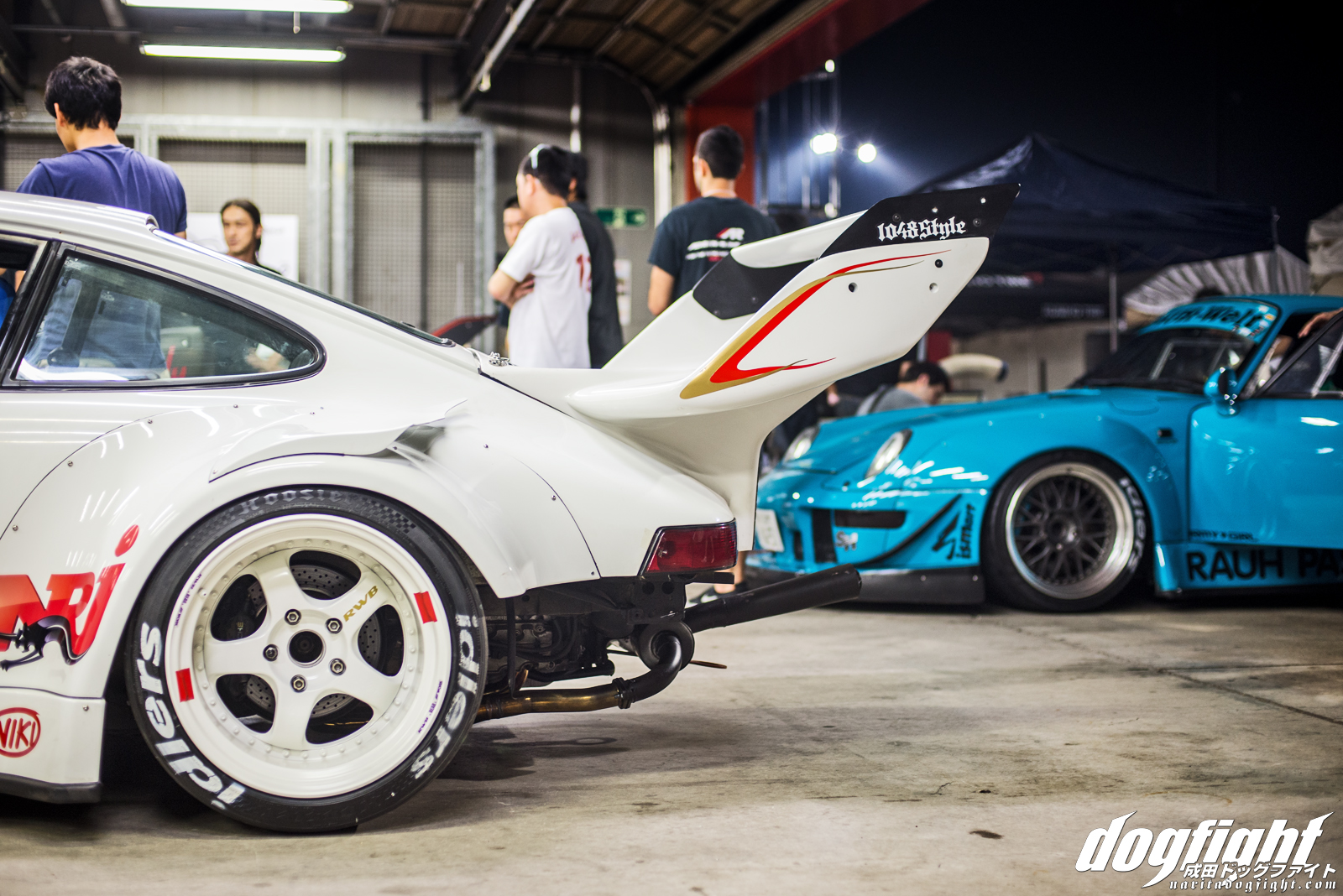 We were able to take a good ten minutes or so to watch the sun rise over the track; it was a moment of calm and contentment I’m not able to get too often; a slowly ascending peacefulness that rose along with the sun. 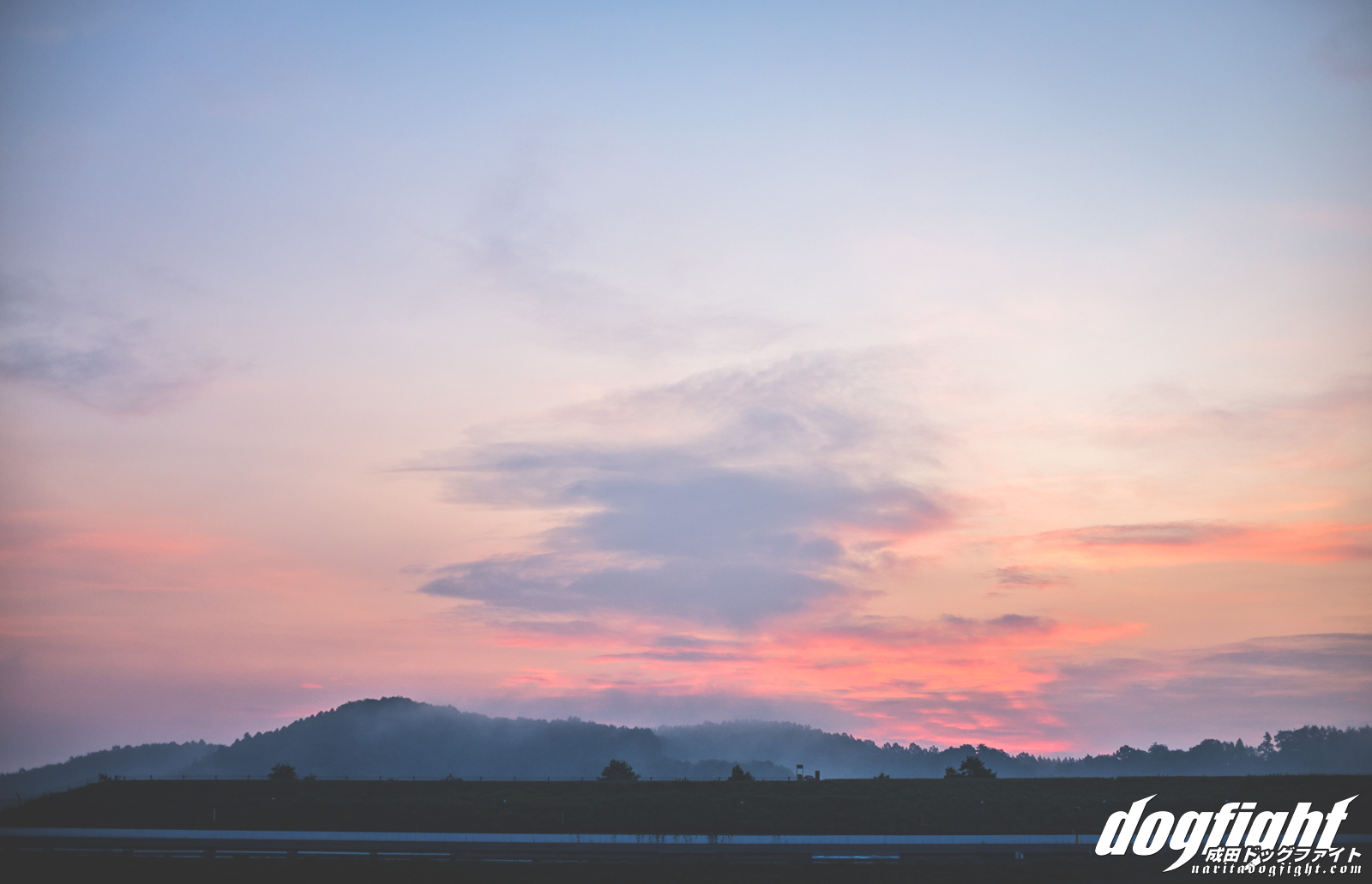 Before I knew it 7am rolled around and it was time for the drivers meeting, which is hosted by the lively Seike, the president of Idlers Club, and is conducted purely in Japanese.  For the foreigners this provides literally no help in giving an insight into track etiquette, so I usually hope that most people driving have some experience on track.  To offset the language barrier, the RWB team holds it’s own meeting shortly after and reviews track rules and conduct, as well as the driver change and fueling process.  Shortly after that we began the process of moving the cars onto the grid. 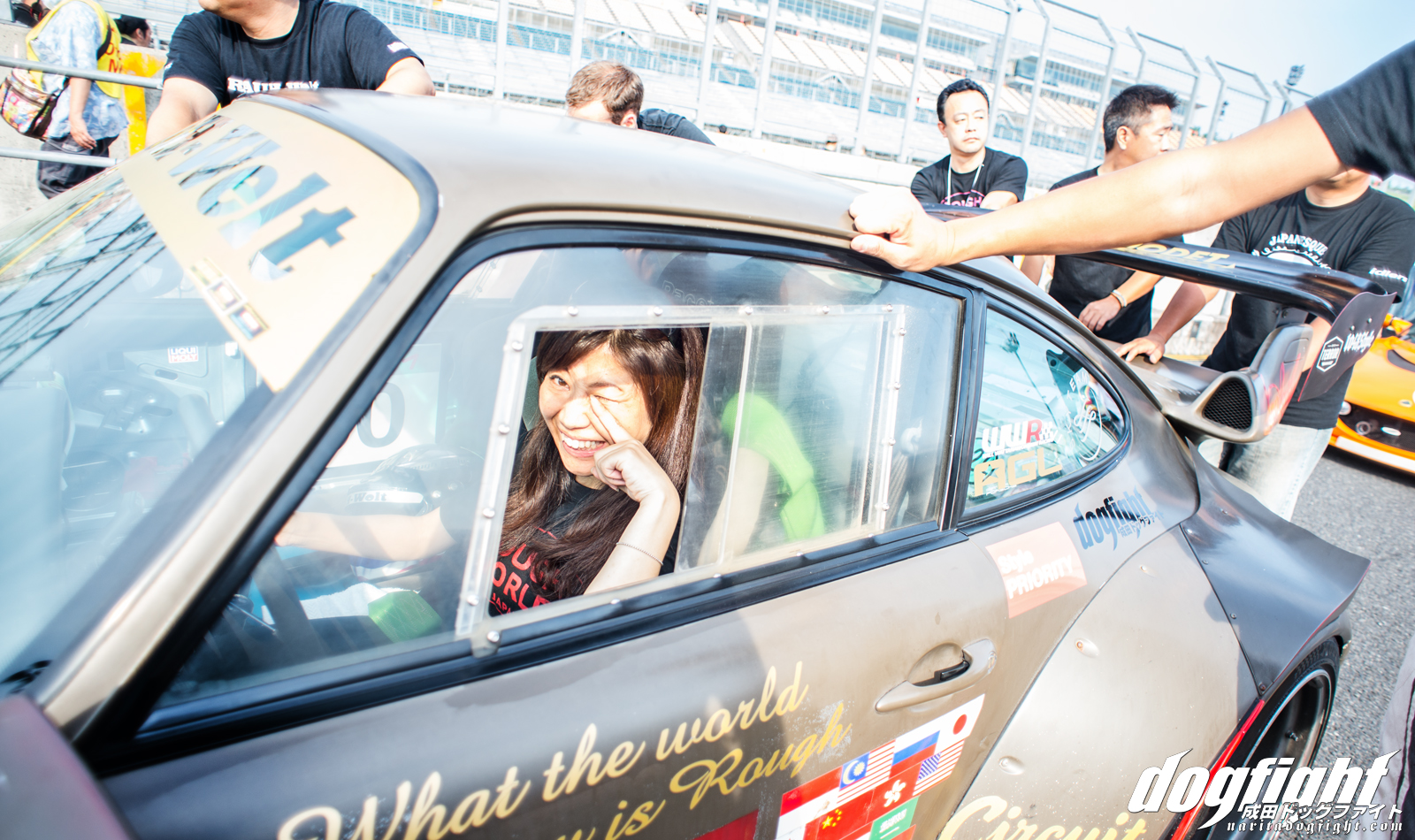 I was more than stoked to be driving with Yoko; over the years she’s become a good friend.  She is one kick ass gal, and no doubt knows her way around behind the wheel.  Another guy I was pretty happy to meet was Alex.  He came from the UK and is a test driver for Honda.  Our team was pretty stacked, and I had high hopes of finishing first among the team cars. 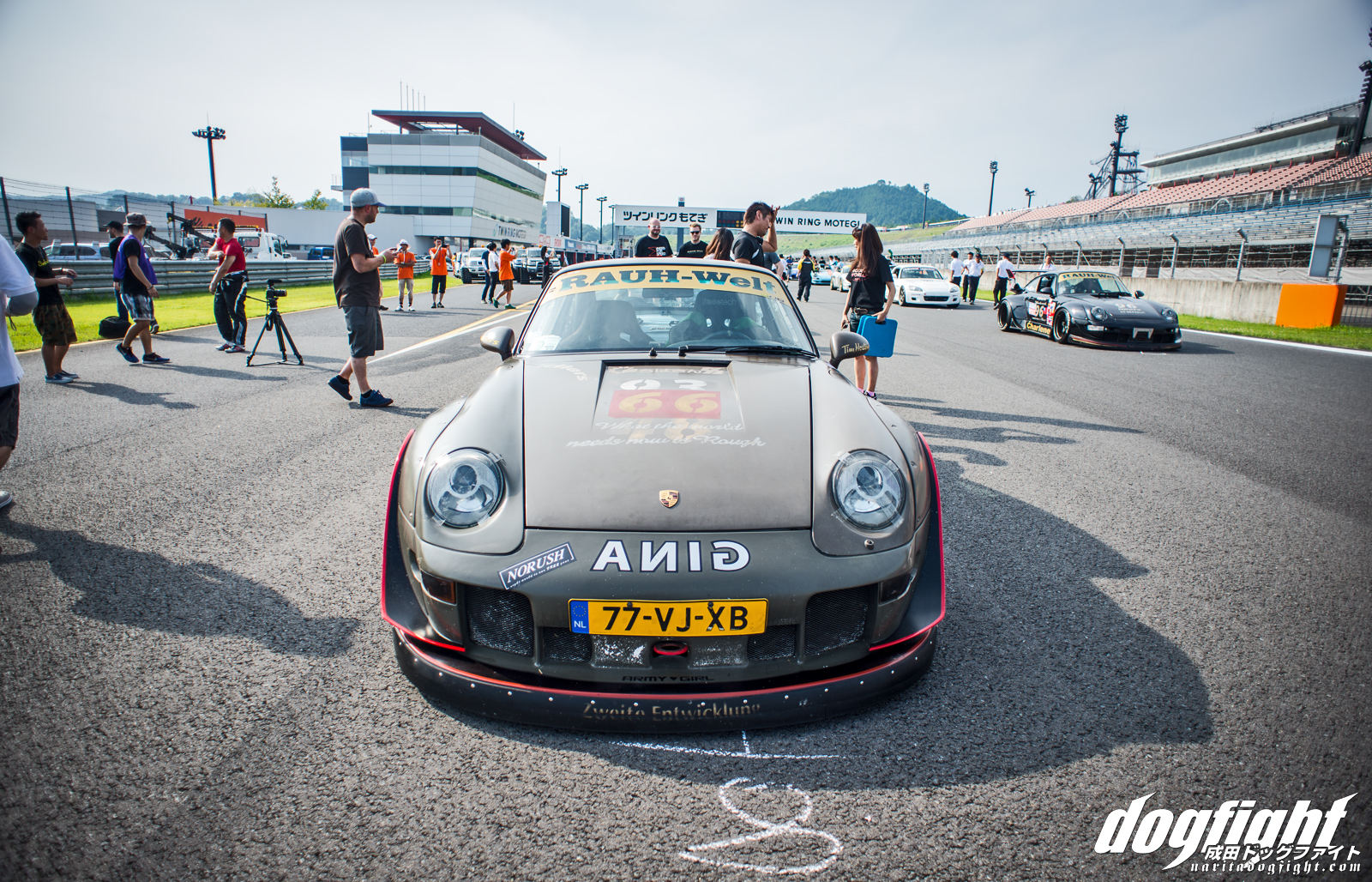 Charlene sure had her fair share of hits throughout the day.  Unfortunately it was the only car that wasn’t able to finish. 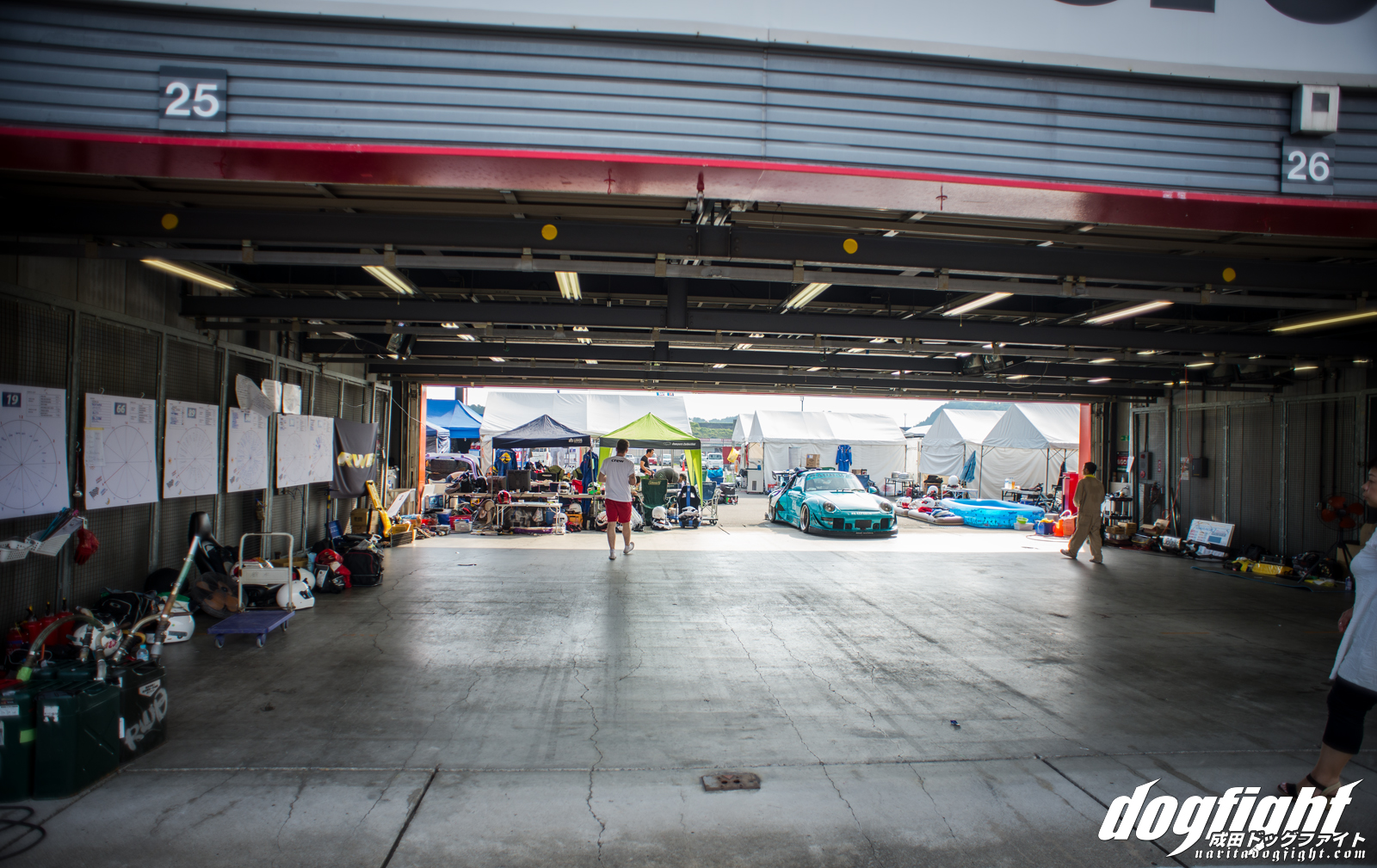 With all the cars on grid, the garage was left looking pretty deserted.  Typically those who weren’t driving used this time to catch some sleep, but I’m usually too excited to sleep during race day.  I also had some ‘journalism’ to take care of. 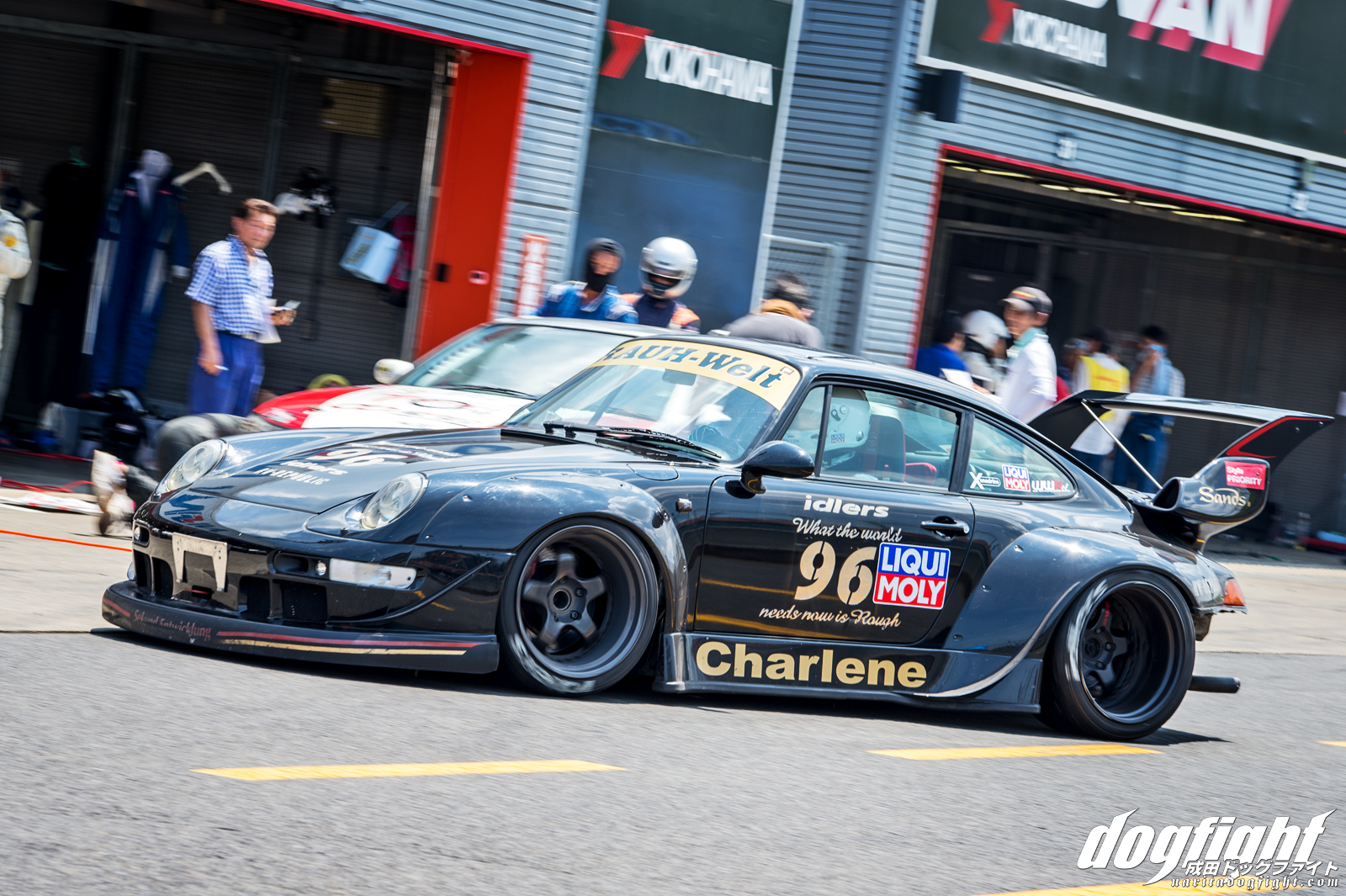 So while the first few stints drove on and the flow of the race became settled, I was out taking photographs. 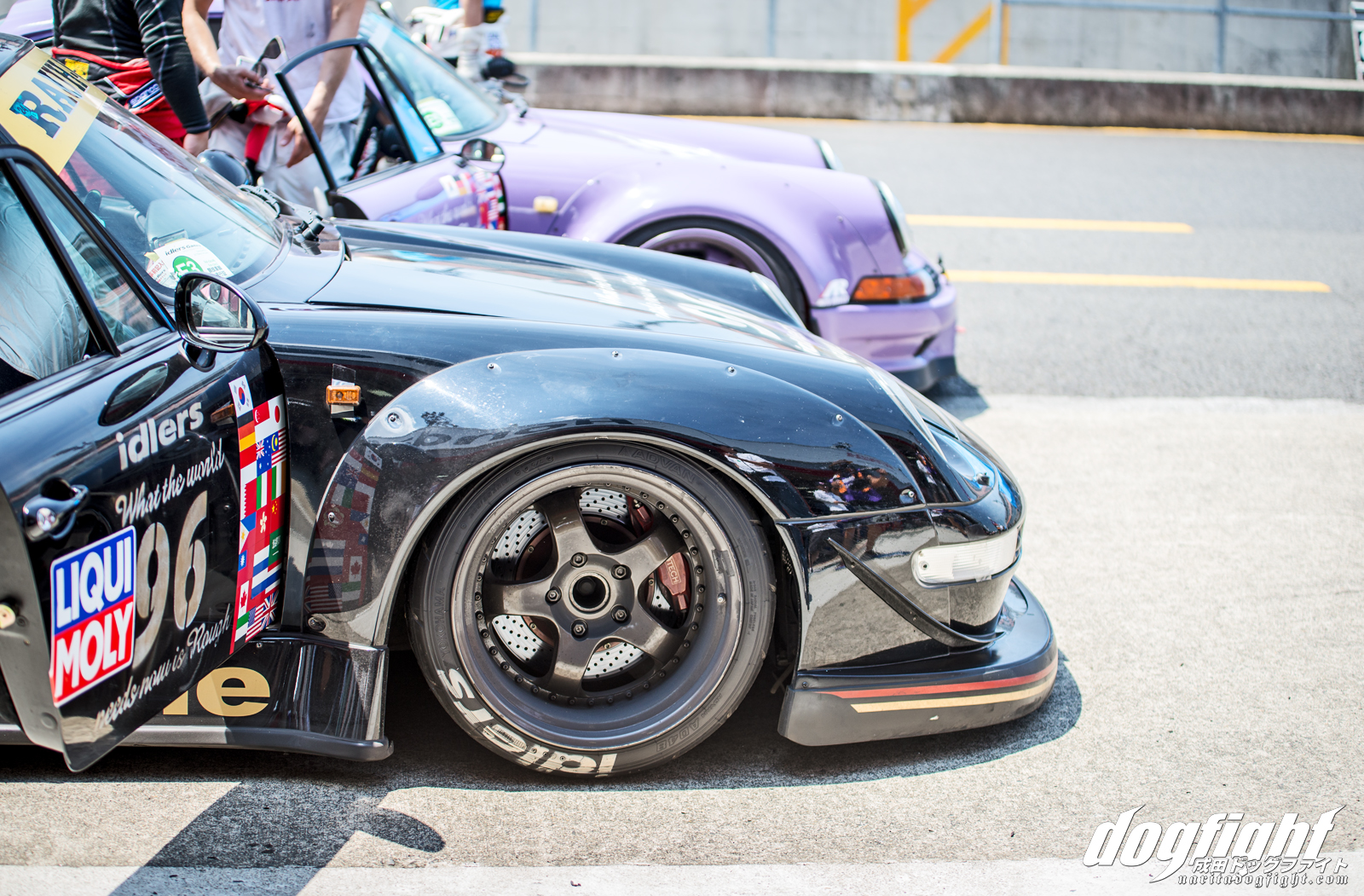 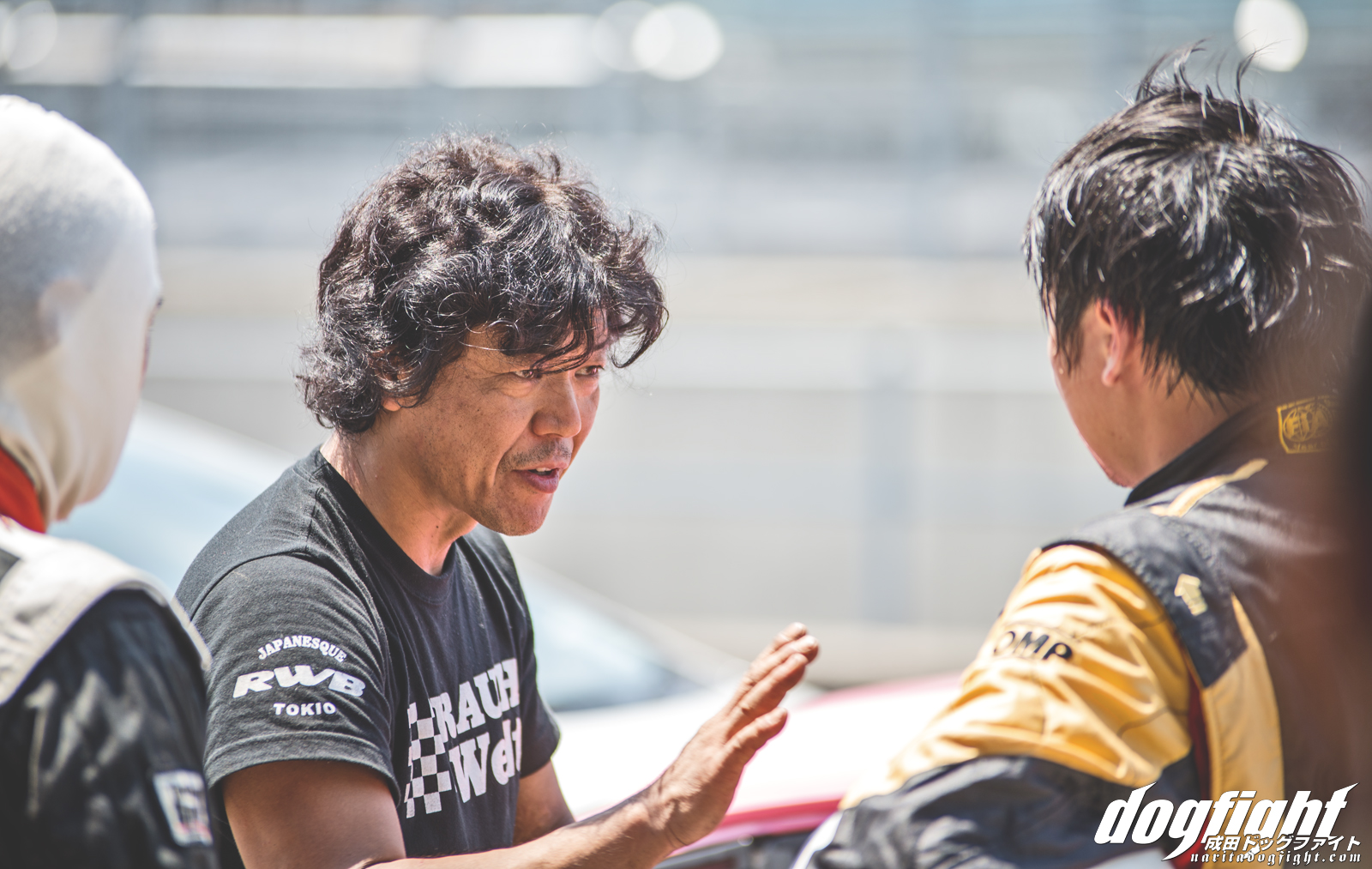 Nakai giving some of the team members pointers on how the Porsche’s react in certain situations. 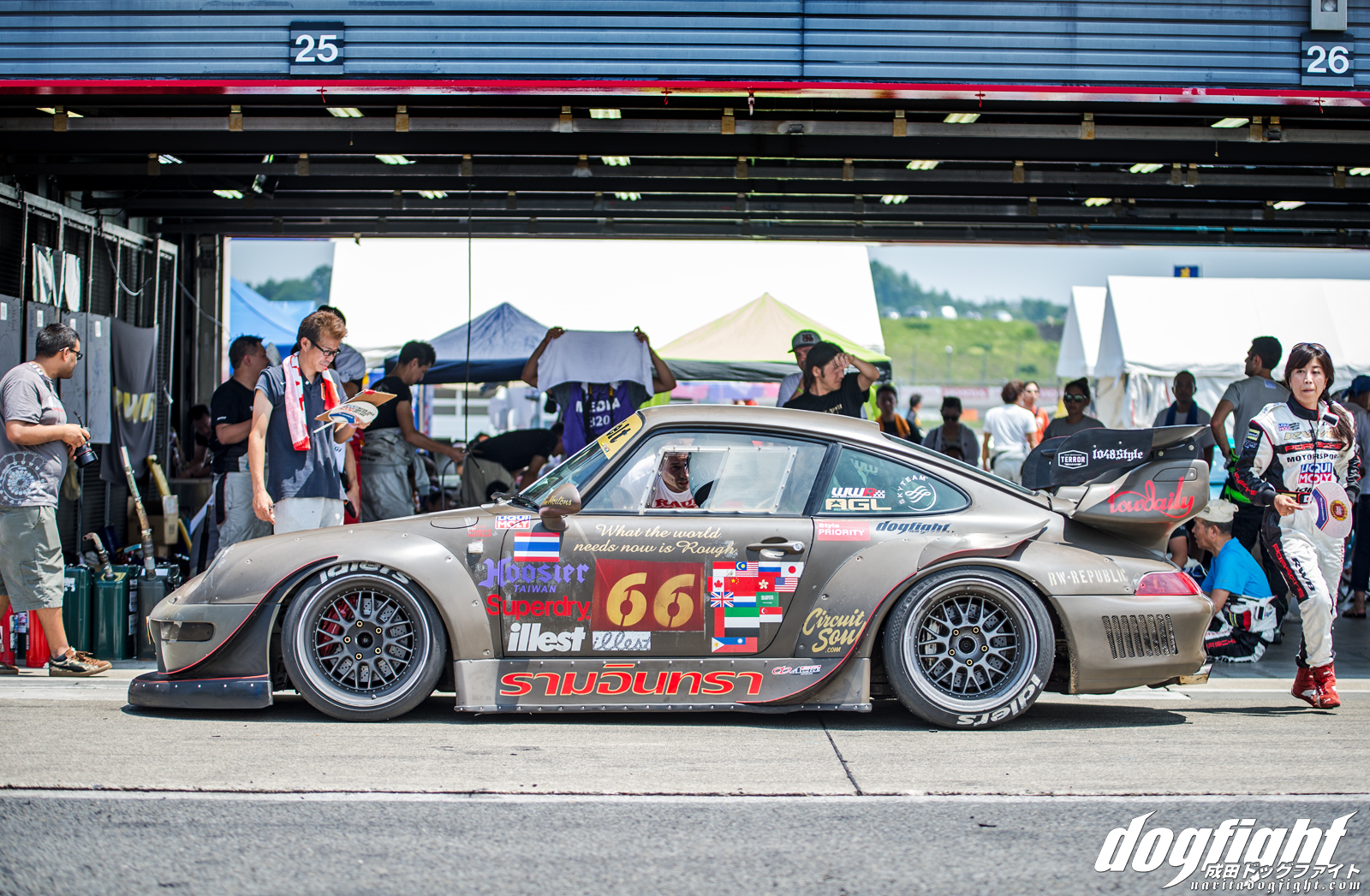 Time goes by quicker than you would imagine though, and before I knew it I was to drive the third stint.

Check back soon for part 2 of the on track coverage of the Idlers 12h Enduro.