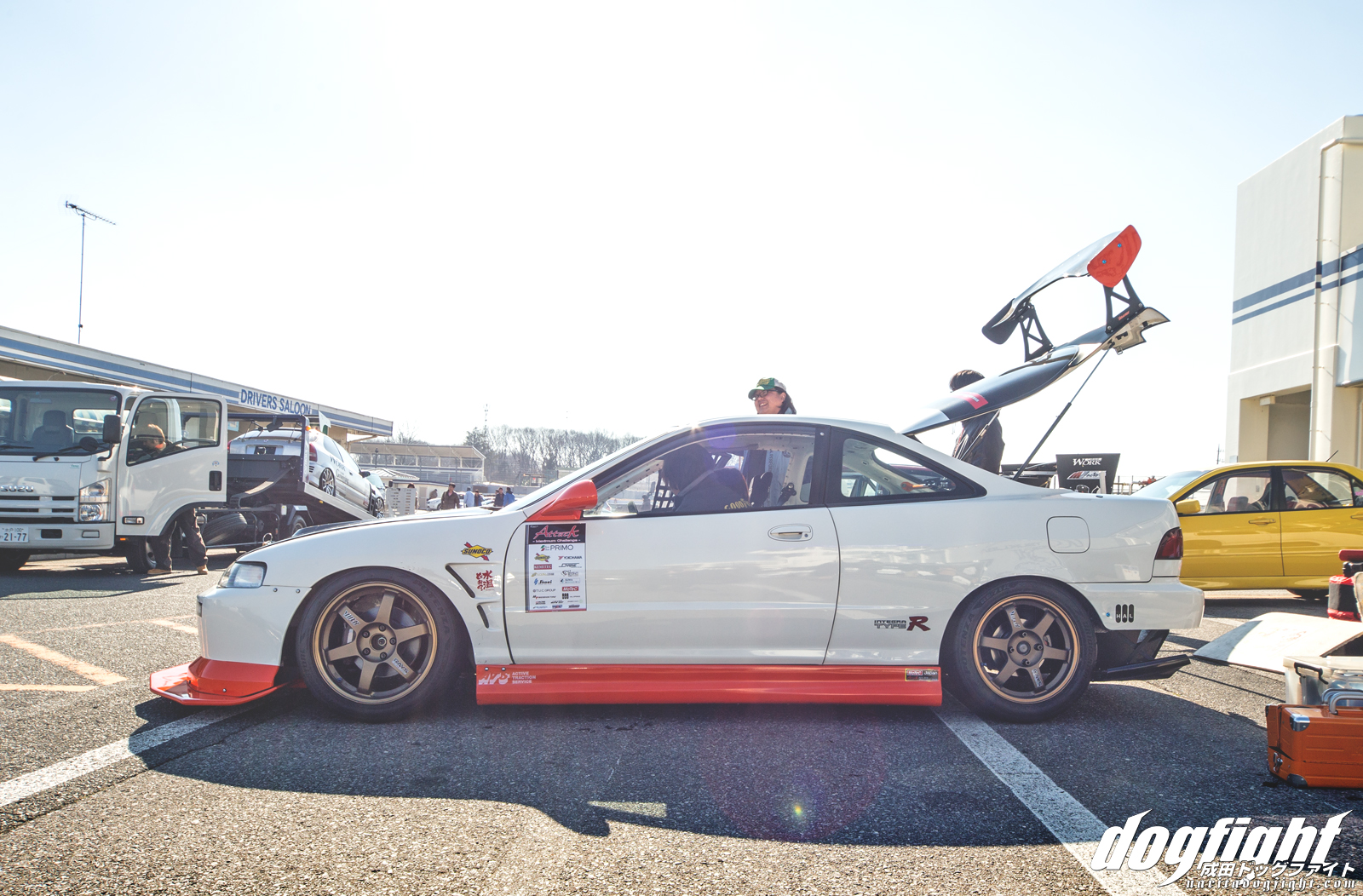 Self-proclaimed amateur time attacker ‘Orange-san’ has made quite the impact in the small world of Tsukuba time attack.  Not only because of the bright orange accent color of his DC2, or his youthful, comedic track side manner; who jokes that his main support comes from Yahoo Auction and Super Viva Home Kasukabe (think Japanese Home Depot).  While those qualities alone would make people gravitate towards the Integra in the paddock, it’s what people see up close that garners the most attention to the DC2.

While admittedly, at first glance, the car doesn’t seem too extreme, but under further examination it seems that Mr. Orange certainly has taken a unique approach with building the car.  While the Type-R B18 still remains, it isn’t quite the same as it was intended to be from the factory.  No longer sporting an electronic fuel injection system, the fuel is now delivered via a set of Keihin FCR carburetors.  A setup, although made somewhat well-known by the SS Works CRX, is still very rare to see; especially because a lot of people see it as a step backwards in technology.  Say what you will about the decisions he’s made though, because the car runs a 1’00.428 around TC2000; which makes it the fastest DC2 in both Attack and Evome.  Granted, that time was set on Advan A050 tires, while, let’s say for instance, Sato-san hasn’t yet jumped from a radial tire.  Regardless, it’s quick. 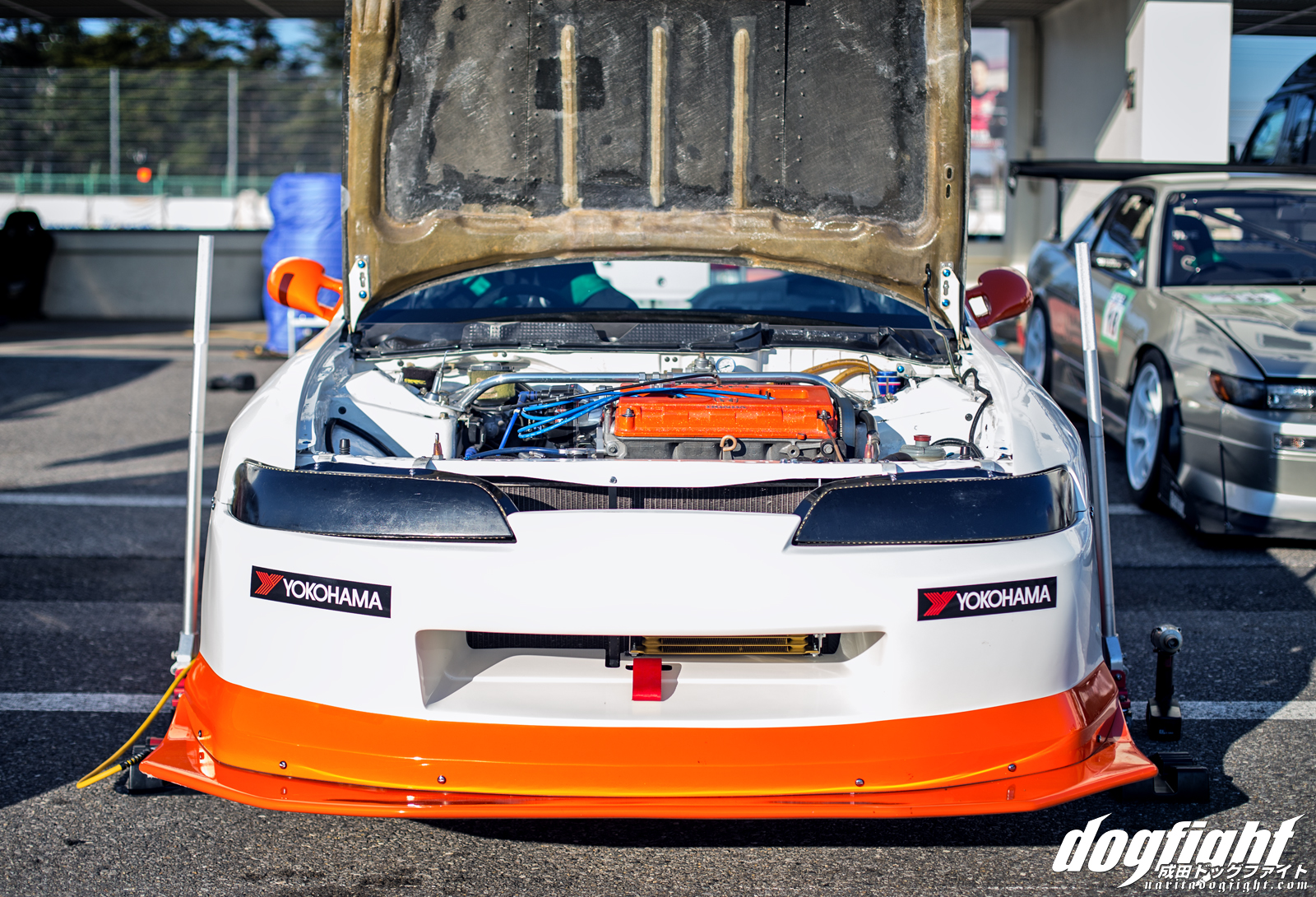 The carb’d B18 manages to put out a respectable 235ps – which is a solid number for the N/A Honda.  Add to the mix that this car tips the scale at a measly 865kg (1900 pounds – hey, just like my Civic!), and you’ve got a very potent combination. 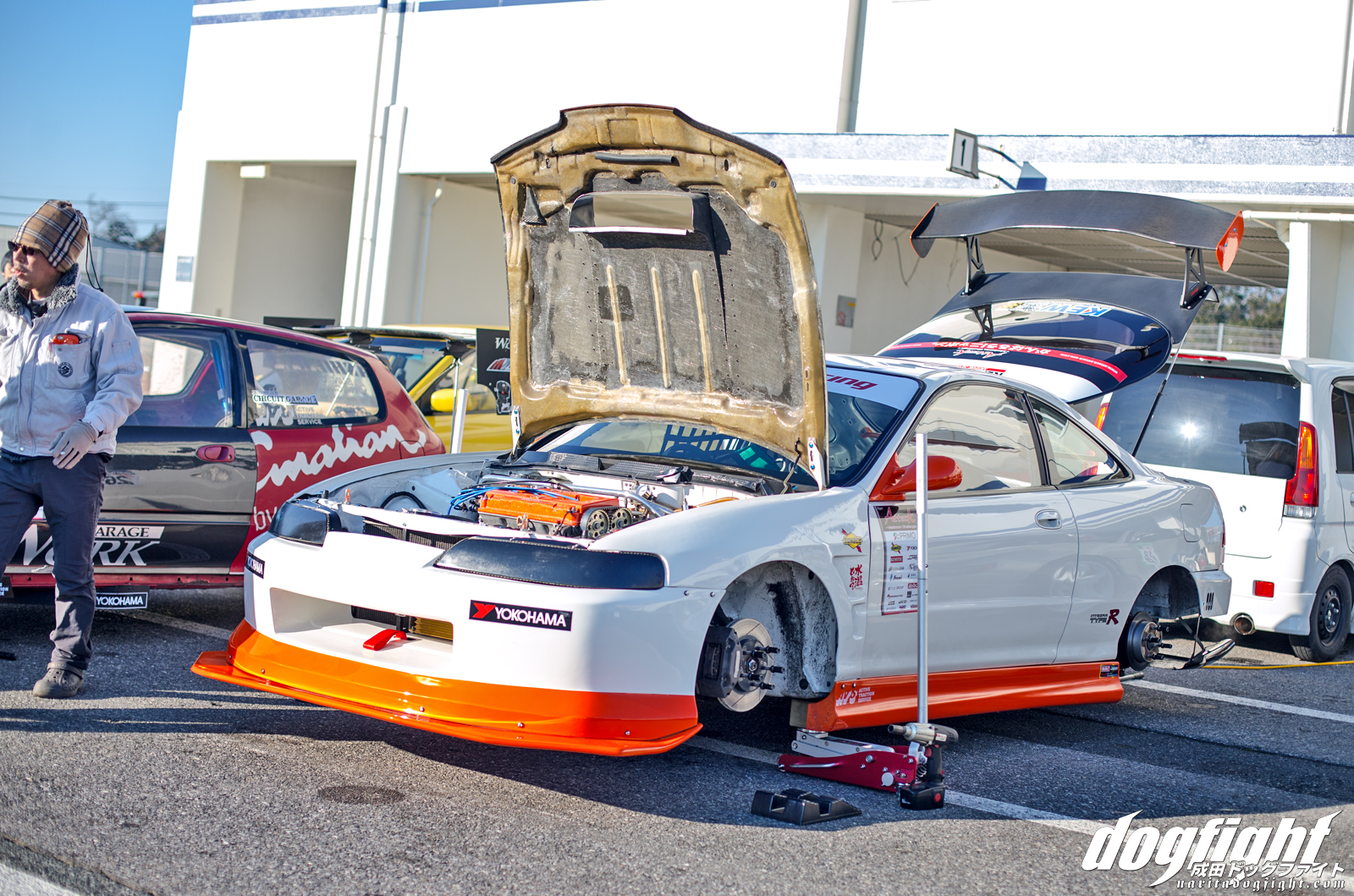 To help ensure the car runs safely, a M.D.I. Dual spark ignition system is in place to ensure the most efficient combustion can be achieved.  There’s something to be said about the work that goes in to tuning a car like this. 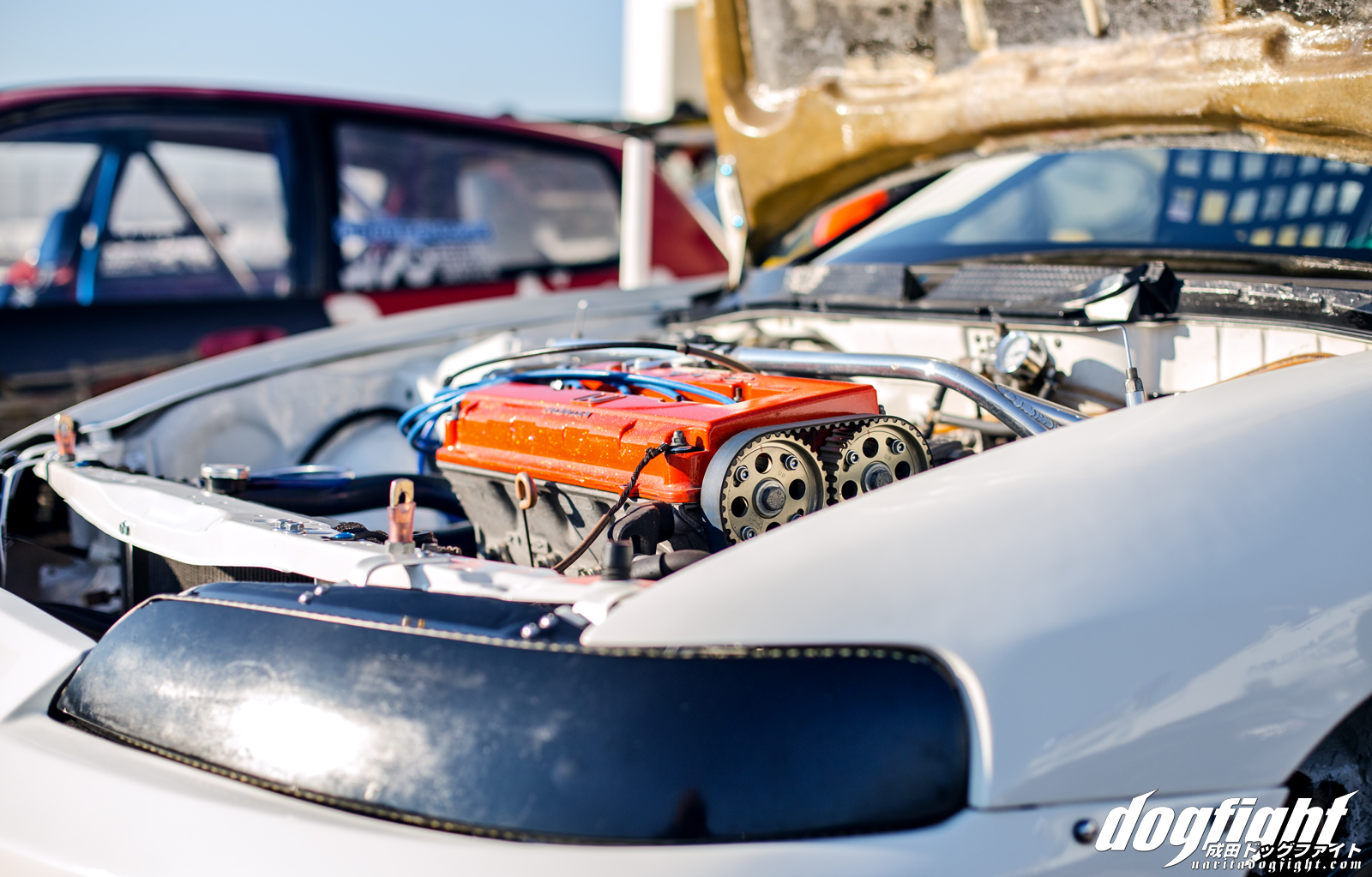 A sparkle orange valve cover resides over the B-series and matches the cars exterior. 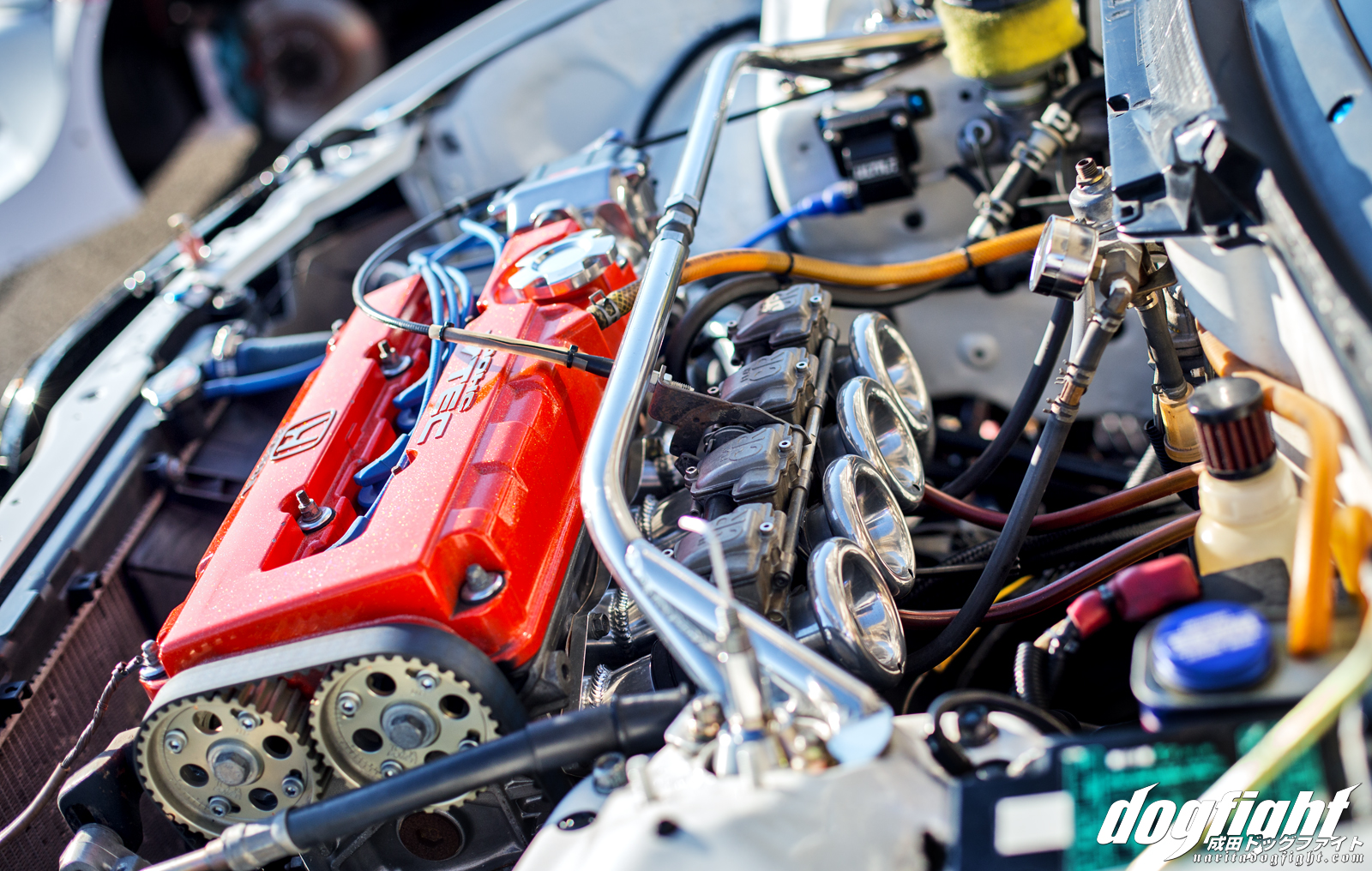 Toda cam gears and internals get the most from the naturally aspirated motor. 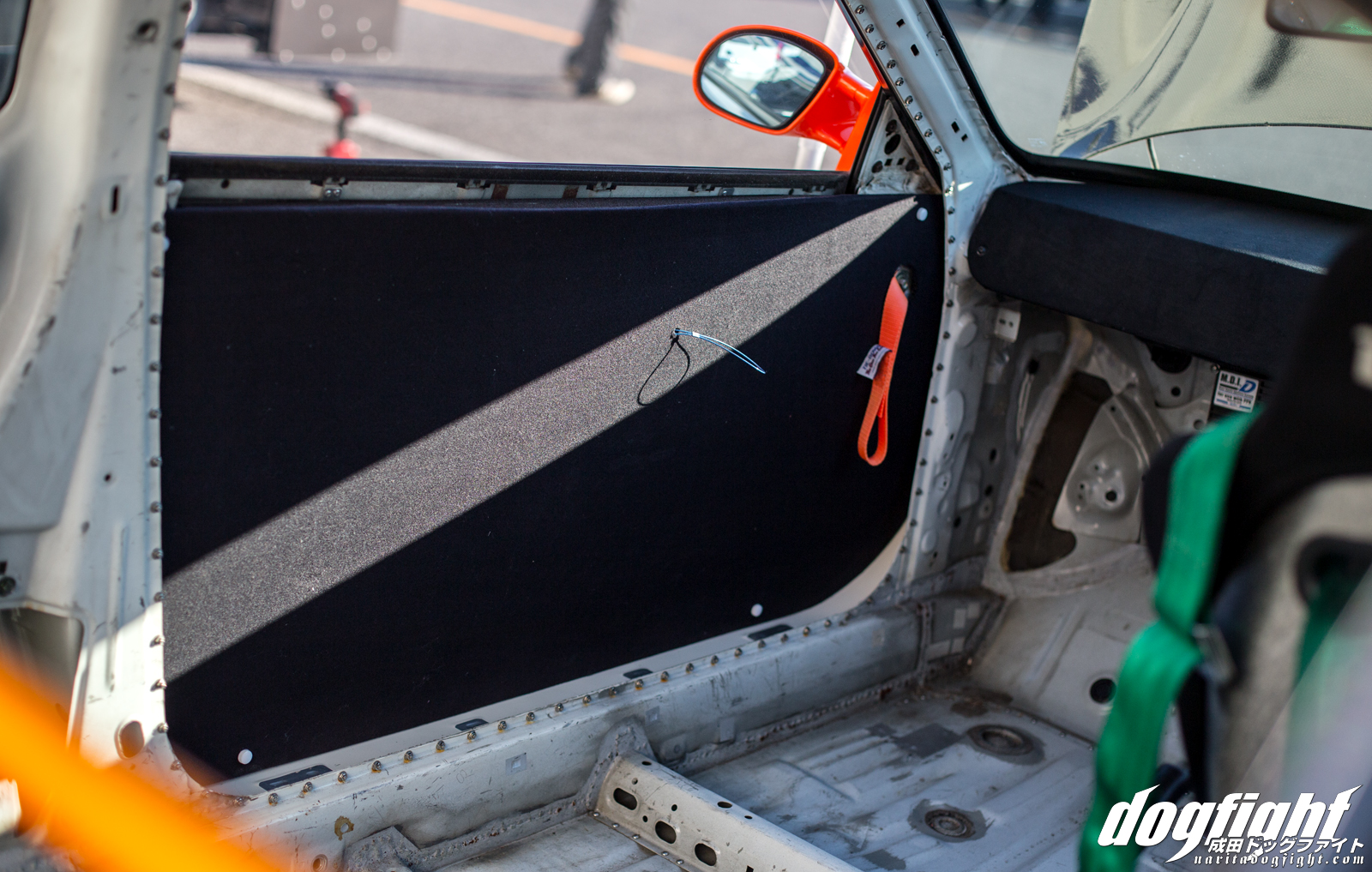 The interior doesn’t leave much to the imagination, just as you would…well, imagine.  Amenities removed, and in their place simple, lightweight replacements – like the door cards and dash. 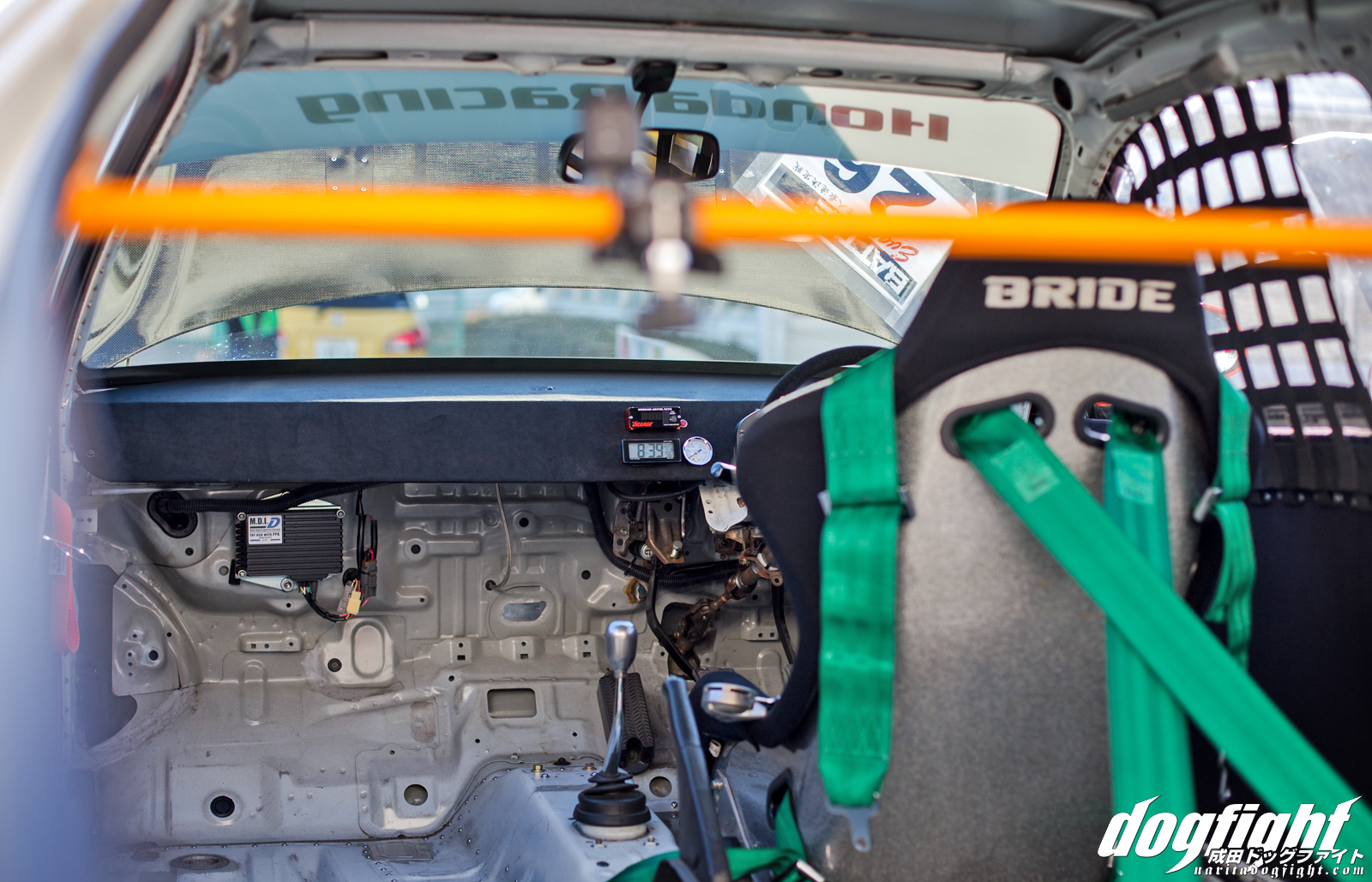 Which are now single pieces of material that house only the necessities. 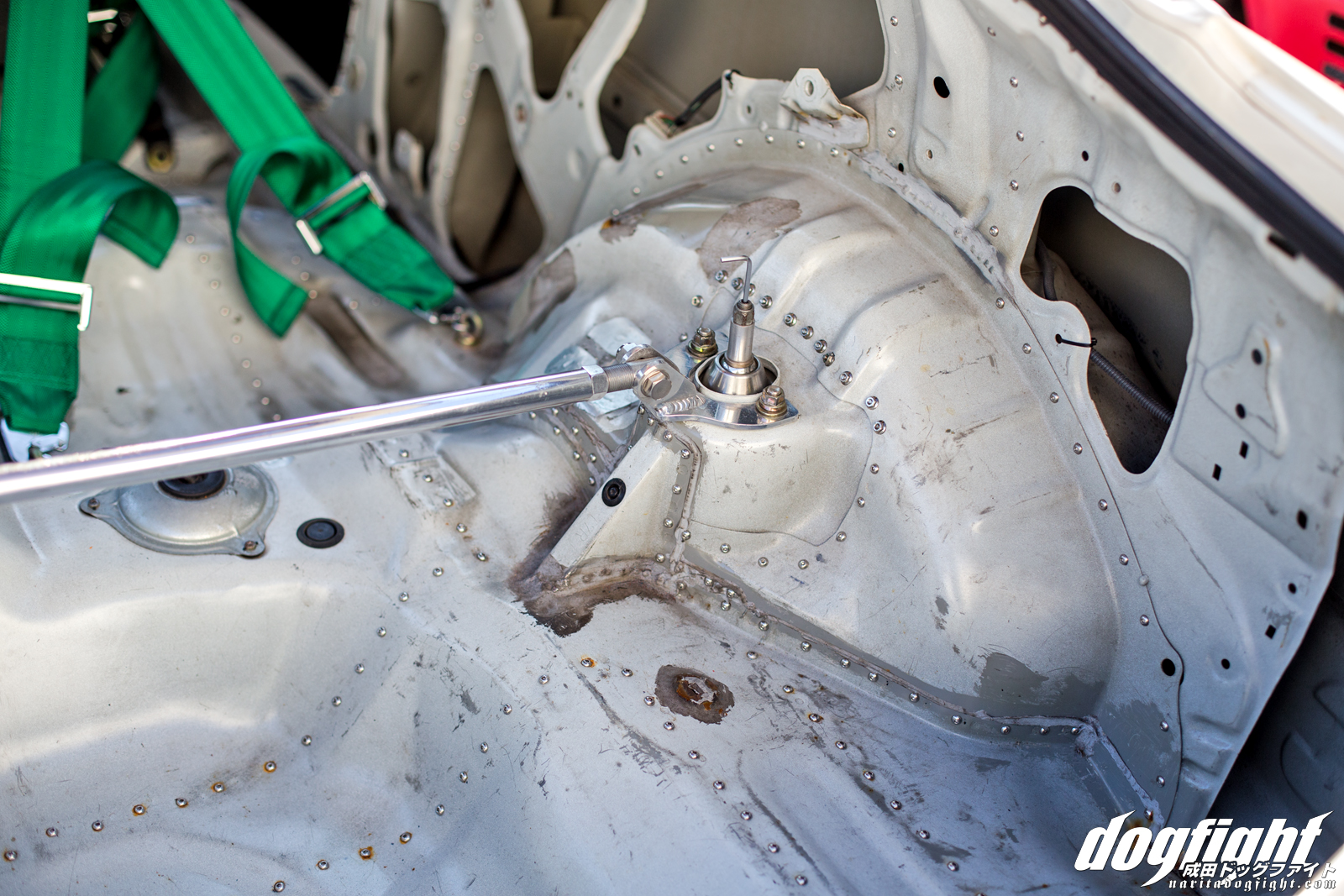 One thing that caught my eye was the use of nuts and bolts along the car’s seams.  We’re used to seeing riveted seams instead of welds, as it saves a significant amount of weight while still creating a rigid chassis; but I’ve never seen nuts and bolts.  Mr. Orange uses them around the shock towers and around the door seams – maybe their just a little more secure. 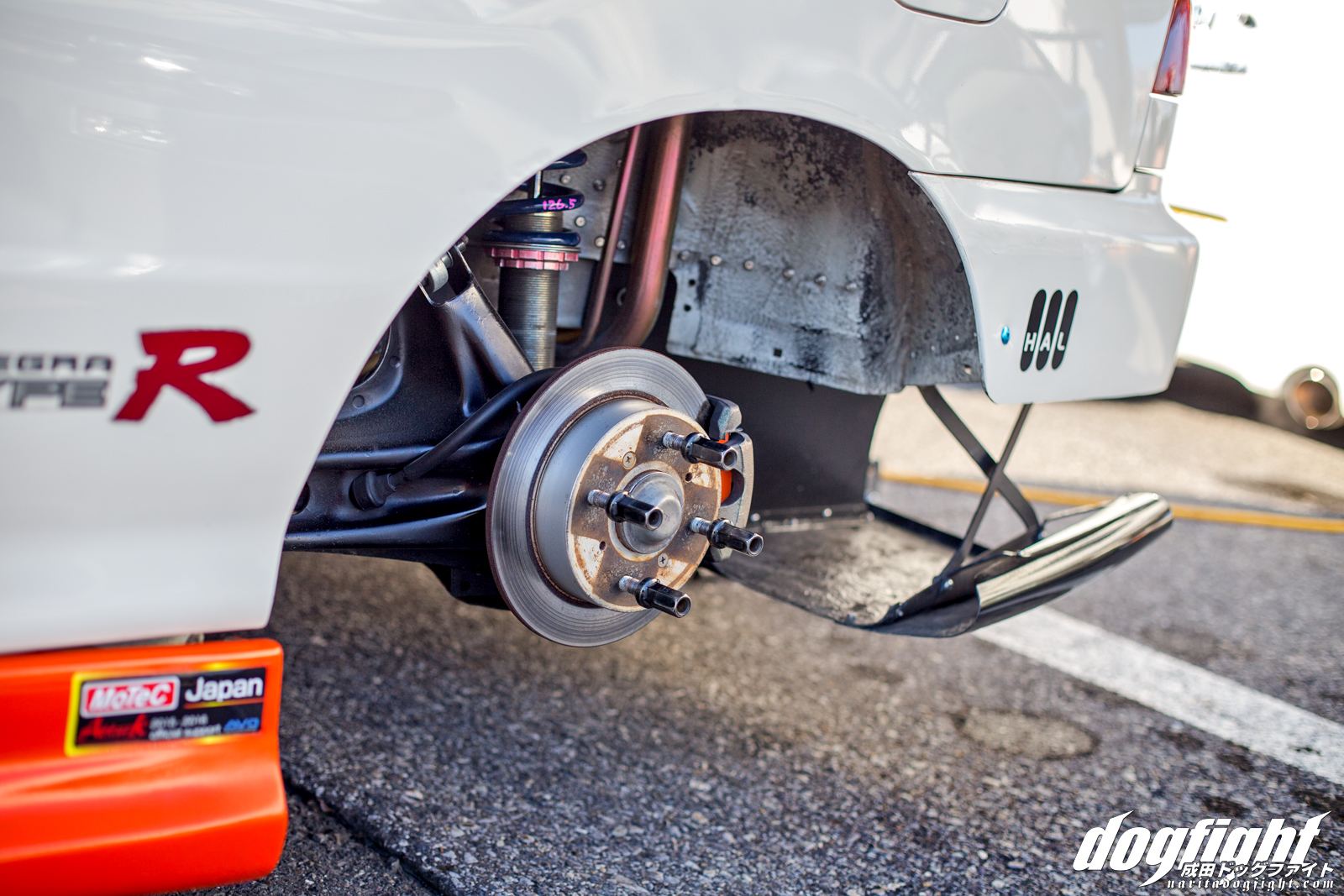 When you don’t have much car to stop, big brakes aren’t all that necessary.  Up front, Sumitomo 4 pot calipers provide most of the stopping power, while OE calipers in the brake help provide balance.  The car rides on modified Apex’i N1 dampers with custom rate HyperCo springs.  The Saitama resident isn’t too far from Tsukuba, and has tailored his suspension setup for the track; despite often driving at tighter courses like Nikko Circuit. 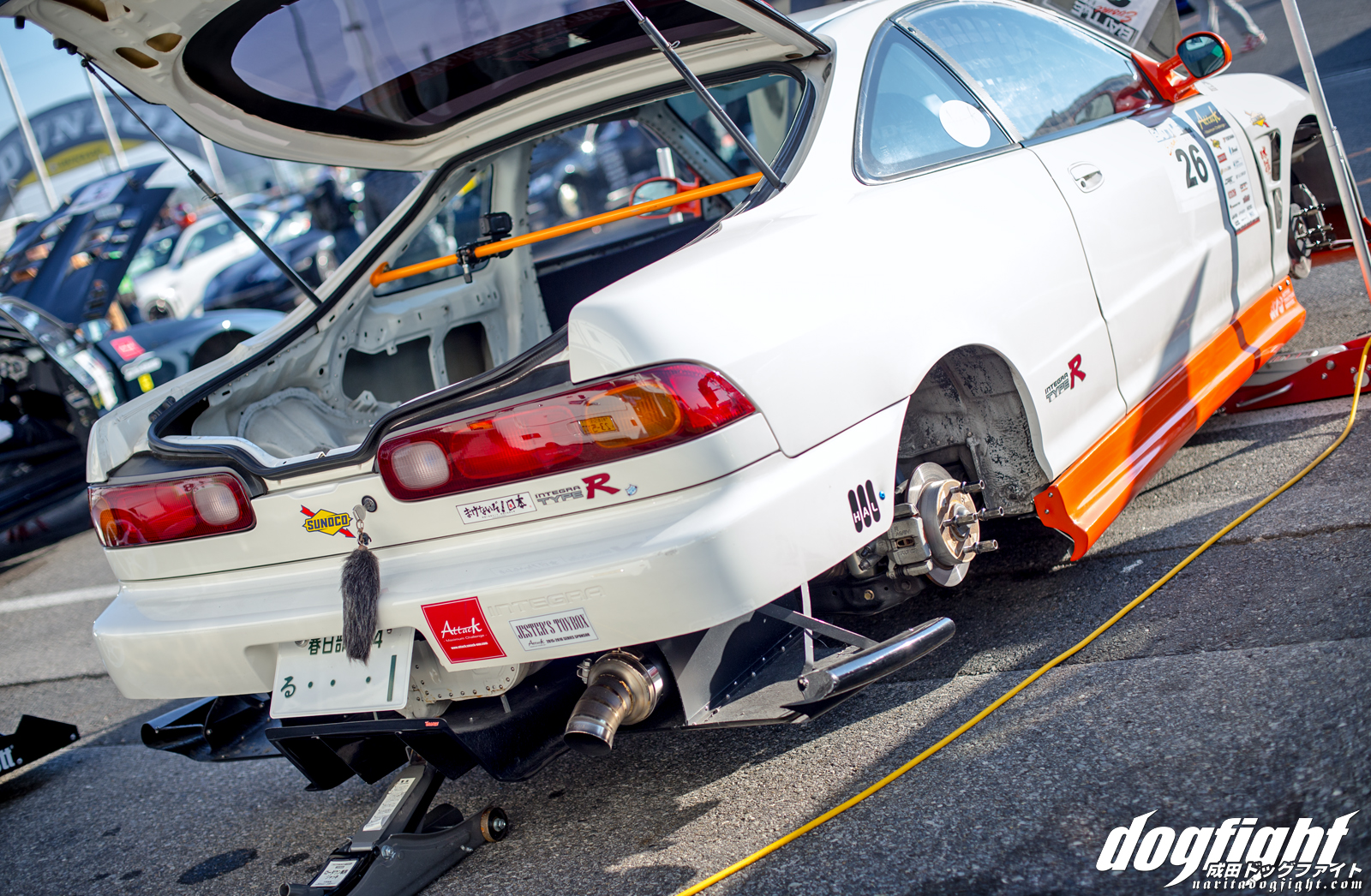 The Type-R is very light on aero by some standards.  A front splitter, rear diffuser, and GT wing make up the brunt of the aerodynamic downforce. 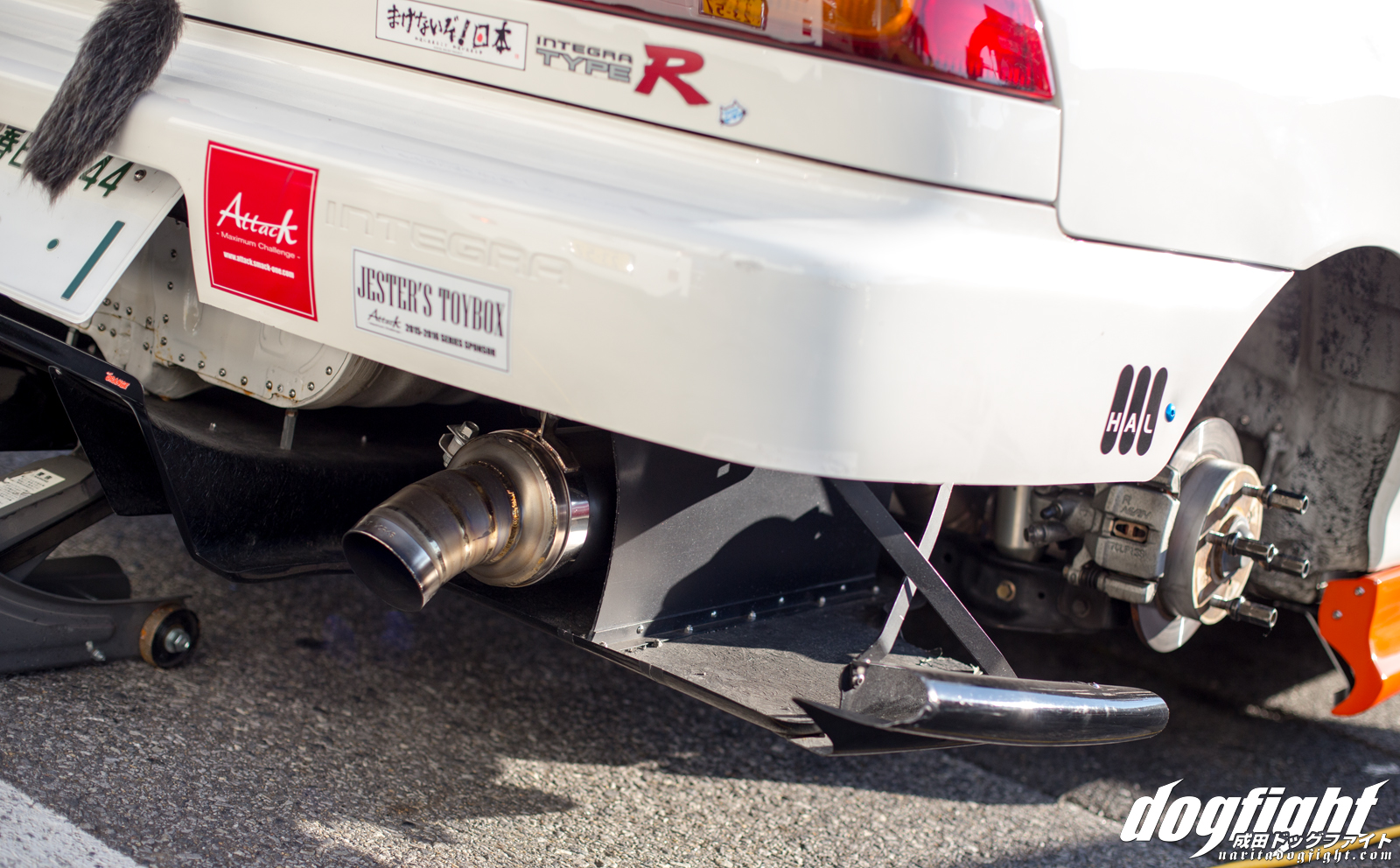 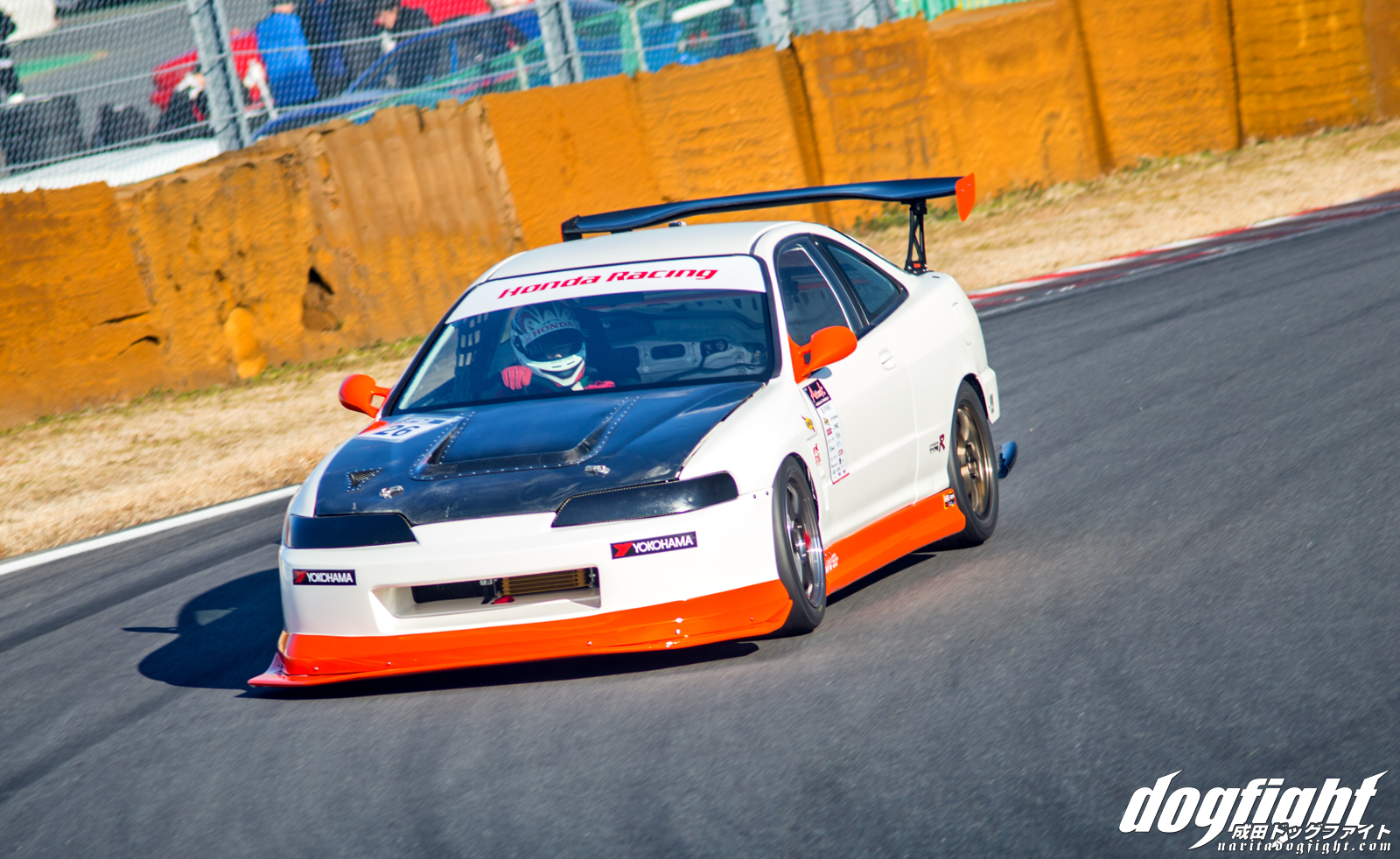 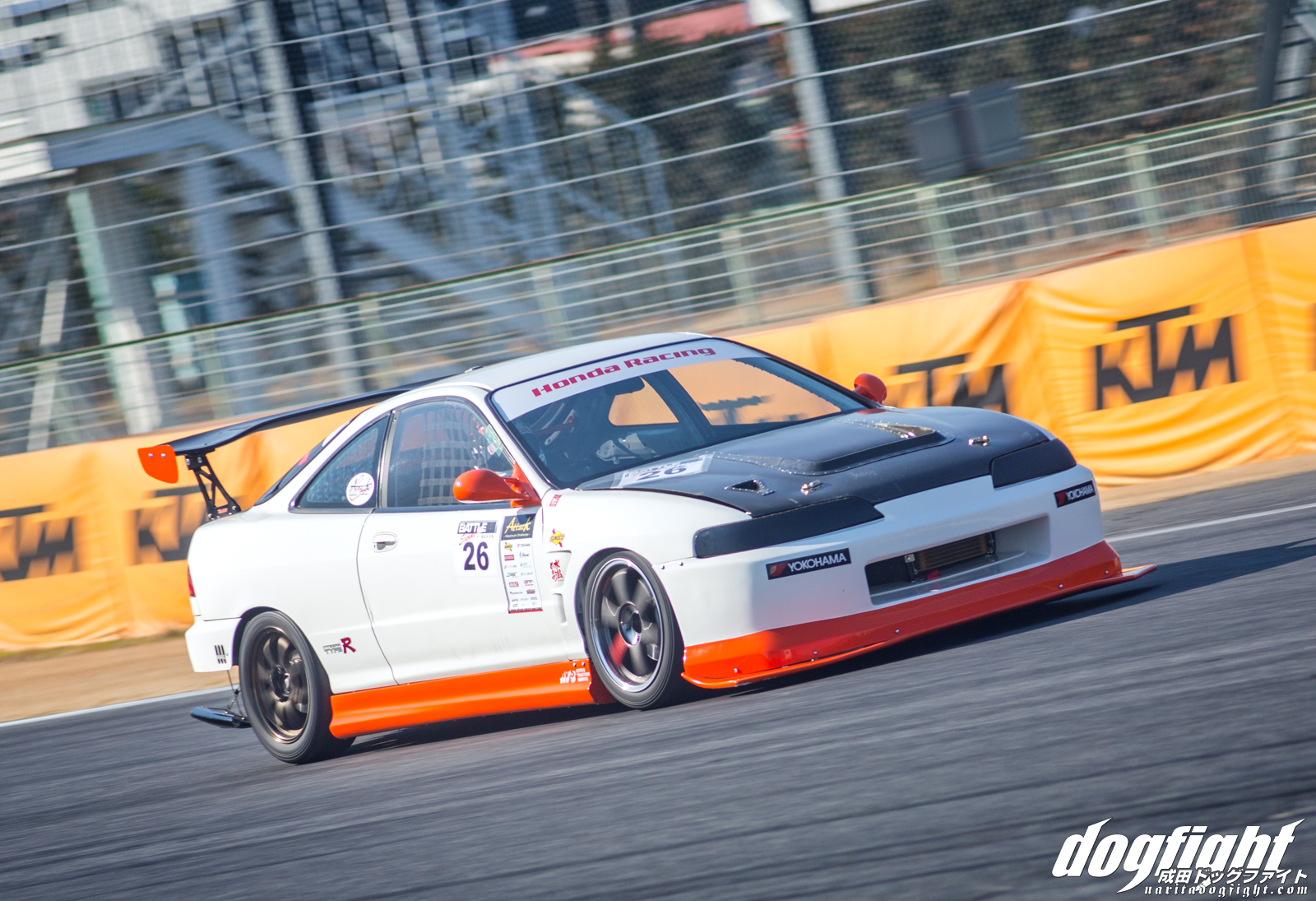 Shooting down the front straight on a cool down lap.  The car has tiny LED’s above the headlights that the driver turns on when he’s on a hot lap.  You know, on account that there aren’t actually headlights on the car when he’s on circuit. 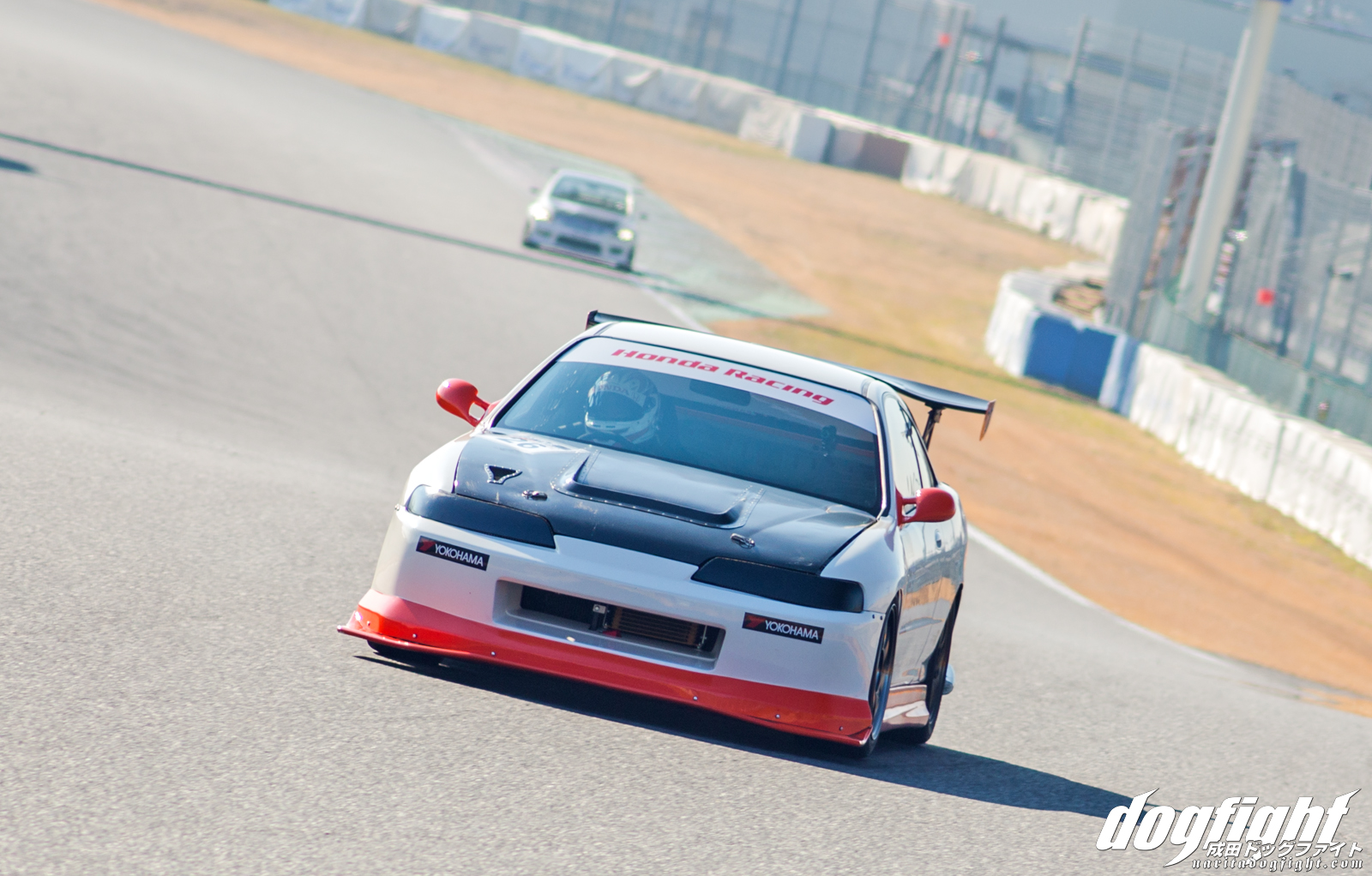 Headed into turn 1 – this is one of my favorite places to shoot at TC2000.  It’s nice to get on the outside of the track. 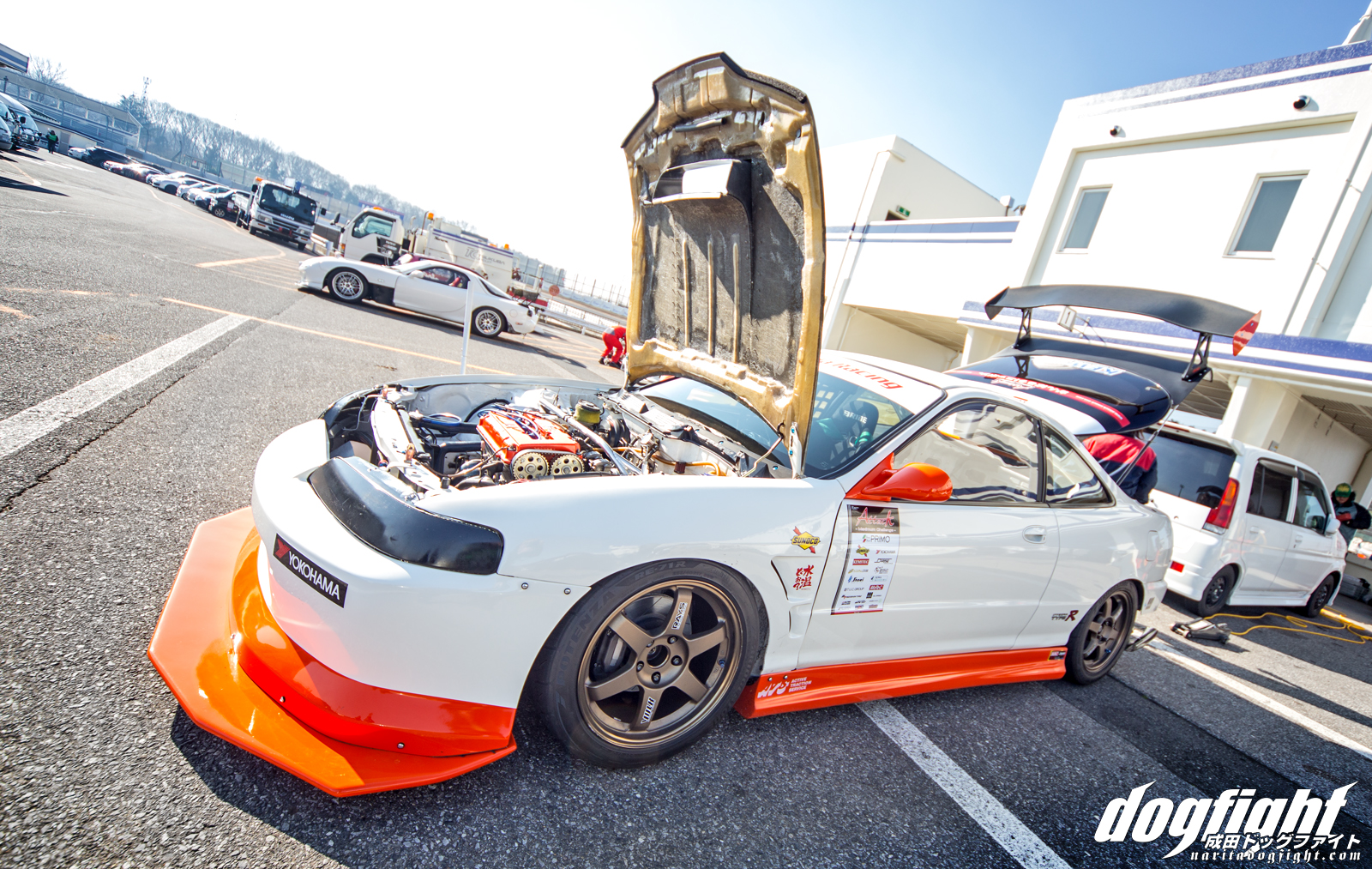 Literally just in writing this I’ve come to like this car even more than I used to.  The complexity of the odd choice of engine tuning is masked by the simple exterior of the car.  Orange you glad I shared it……….