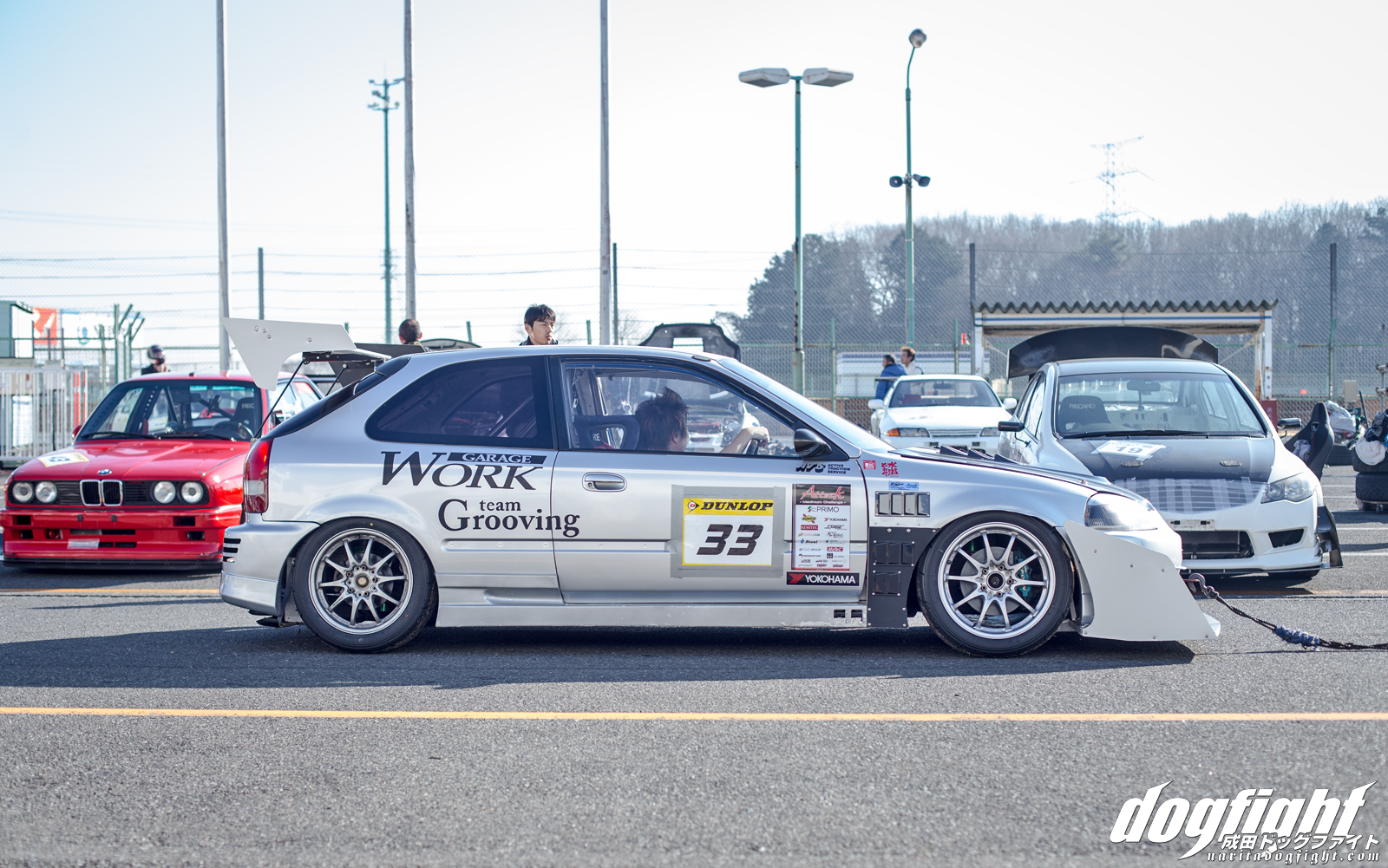 More often than not, the common thought process when it comes to getting a faster time around the track, is to add more power.  Not when it comes to Garage Work, however.  In our conversation, Makoto mentioned that Iwata-san was working on creating packages for his customers that focused on making them better drivers.  More often than not, this mentality would detract from power adders as there is much to be gained in other facets of a build; and with a near stock engine, there is no better example of this than Makoto’s EK4. 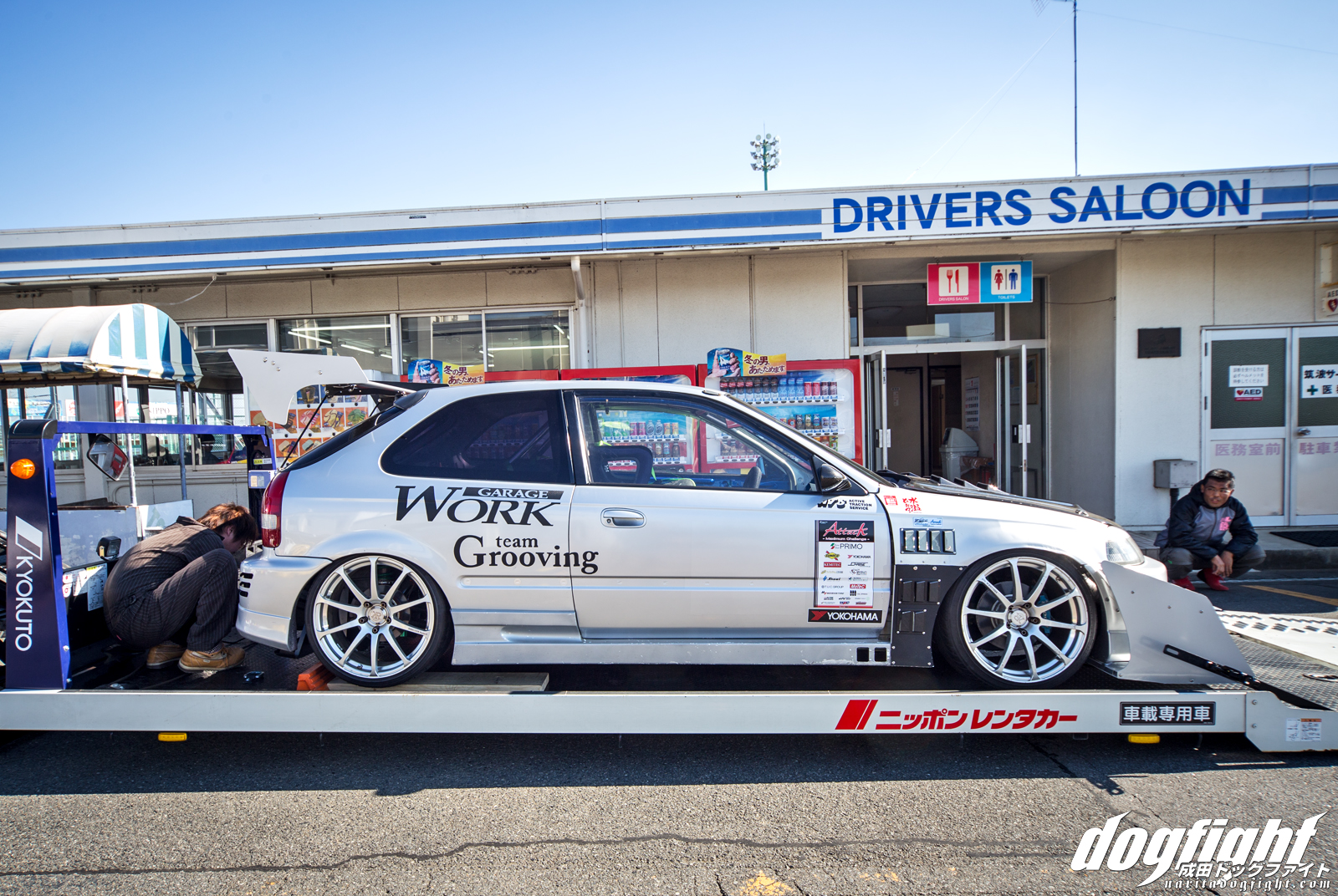 The main driver behind the Ichihara native is the desire to break the one-minute barrier at TC2000 with an engine that has been basically untouched; a goal that has never been reached before – let alone attempted.  Quite possibly one of the most frustrating goals to set for oneself, but no doubt, when it’s achieved the satisfaction will be immense.

This means that Makoto is fighting for a 59 second lap only by tuning suspension, gear ratios, and reducing weight.

Take into account that this is the original engine in the car (it hasn’t even been overhauled yet), and you’ve got not only an incredibly difficult task, but one that ultimately has a time limit as the original B18C wears with each track day. 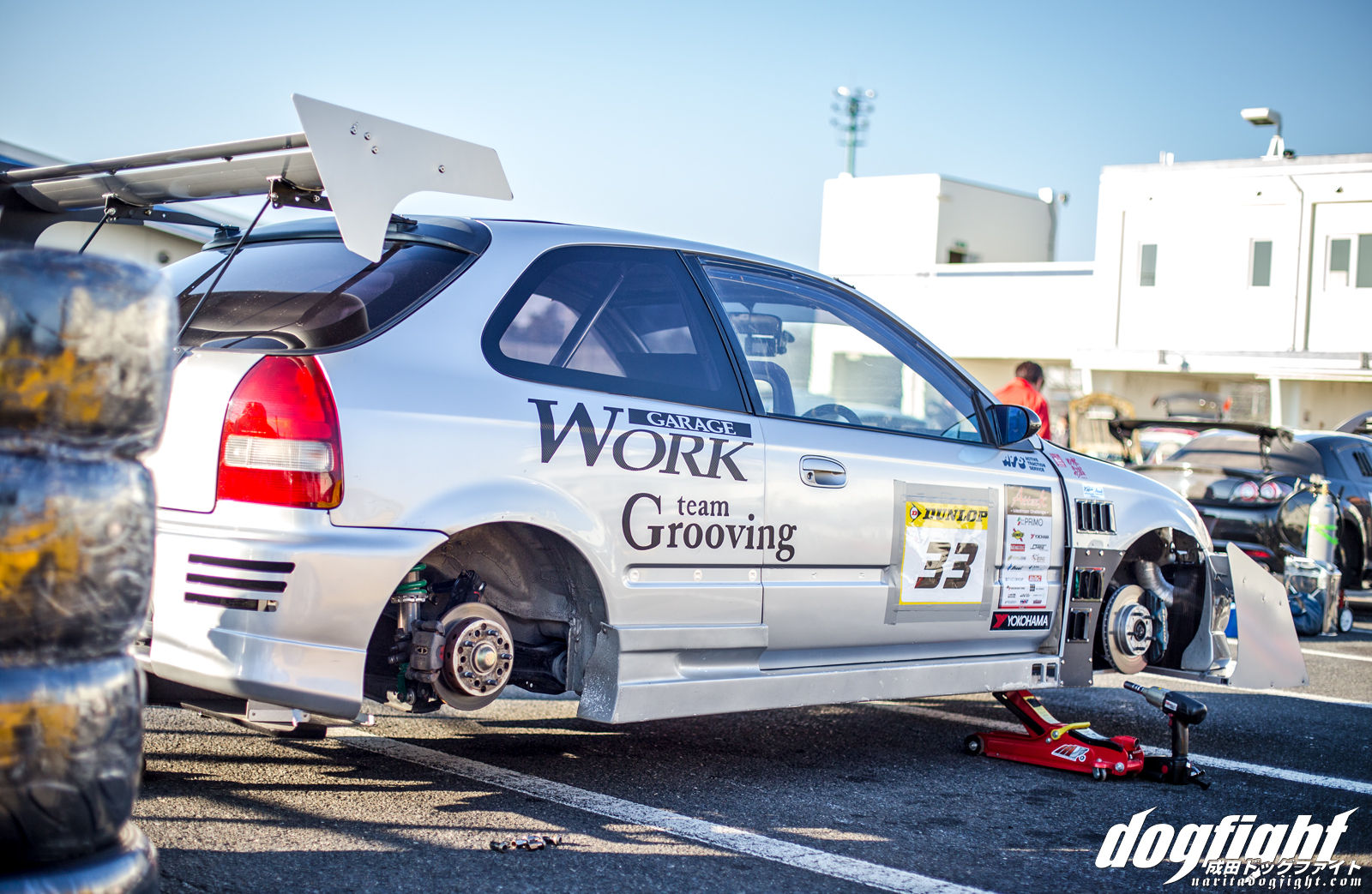 He isn’t totally unarmed in his fight, however.  Garage Work, working closely with Tein, has the ability to swap spring rates and test different damper valving nearly every track event if necessary.  Used to extremely high spring rates and literally no stabilizer bars, the Garage Work camp knows what they’re doing when it comes to suspension tuning.  The EK4 currently has a set of Tein HT dampers valved to a custom setting. 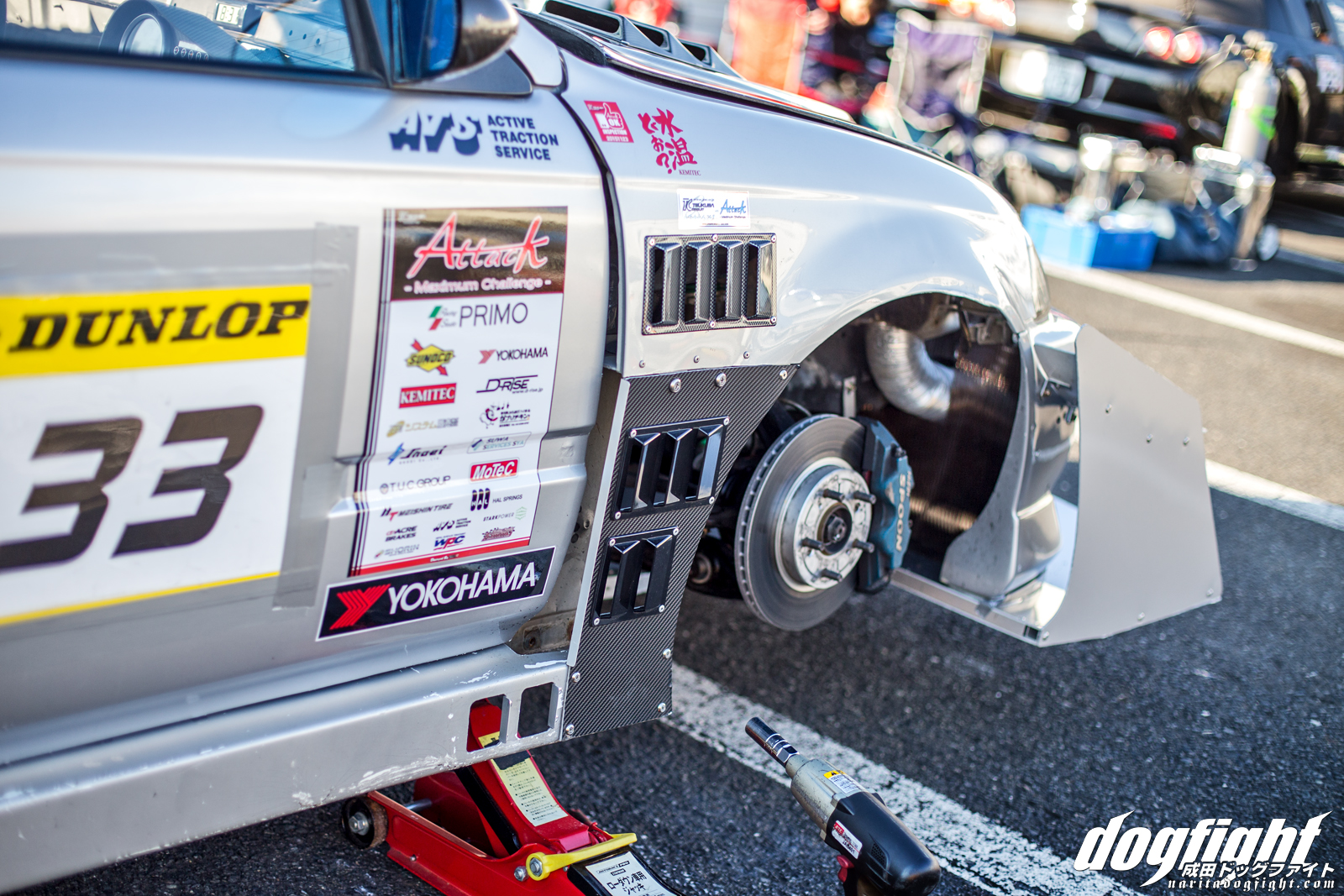 Makoto’s Civic looks pretty extreme from the outside.  The custom front splitter and canard setup are his creation; along with the fender treatments as well. 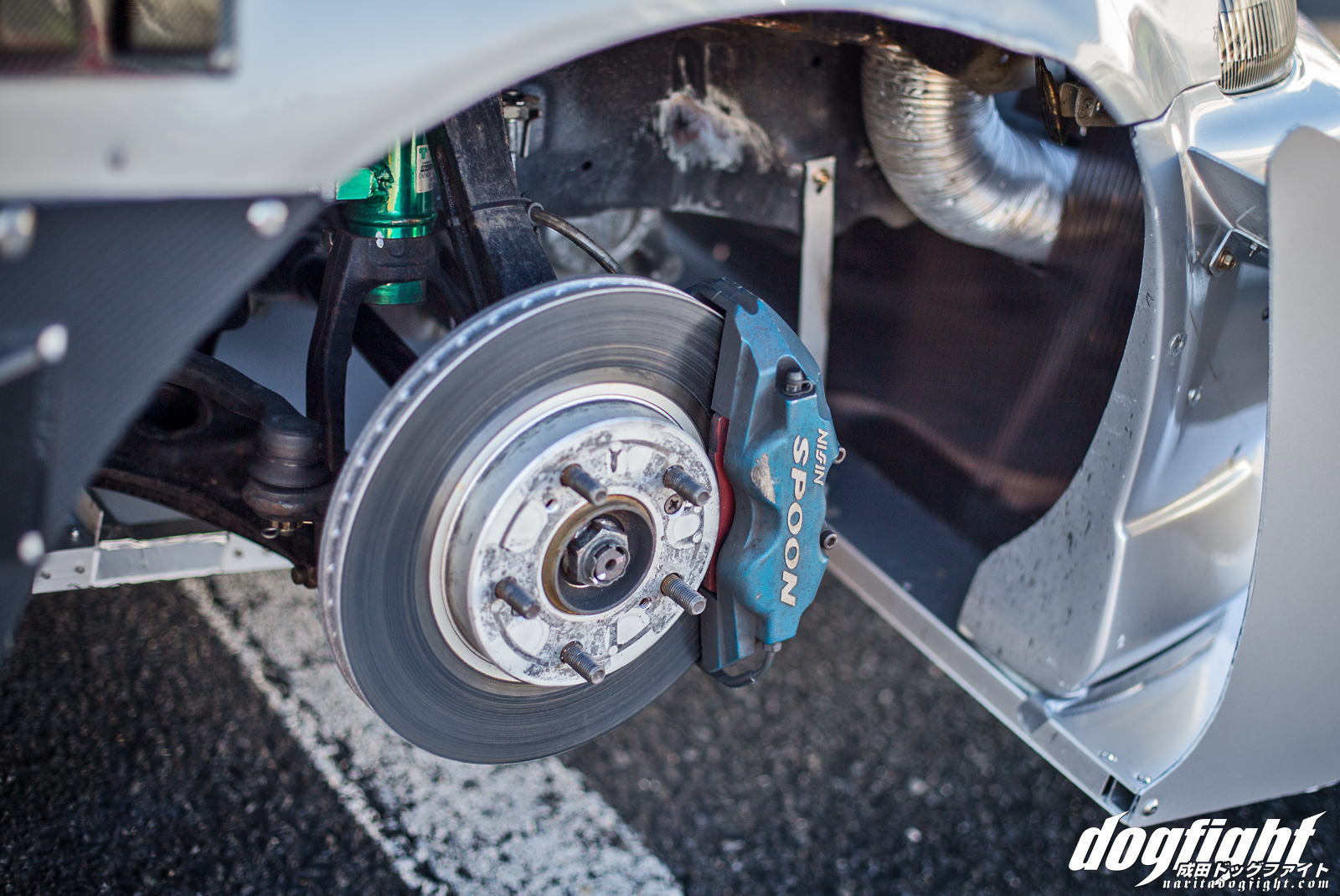 OE brakes suffice in the rear, but the front brakes get the Spoon treatment with the 4-pot, twin-block calipers – which are notably lighter than the OE calipers. 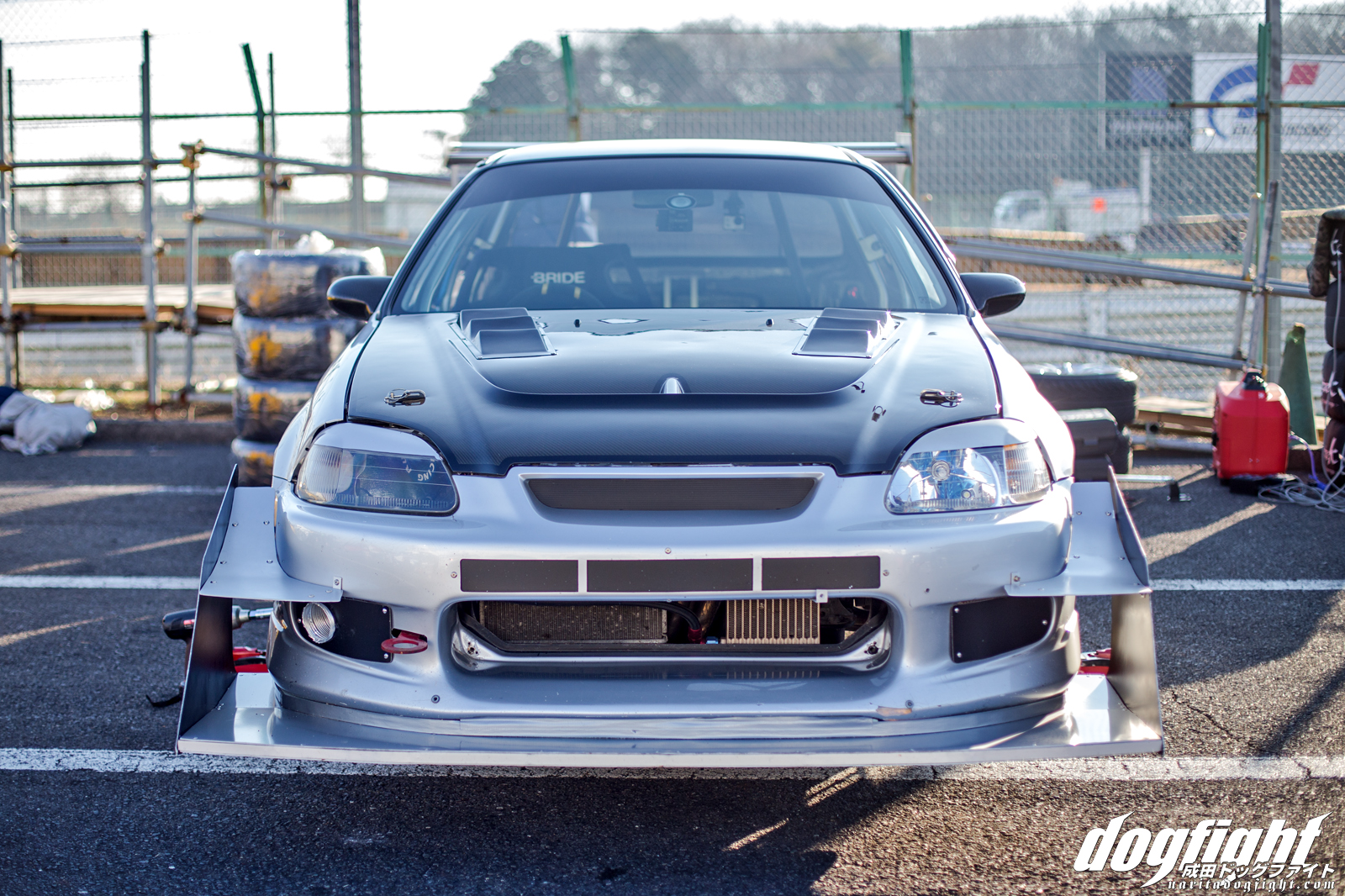 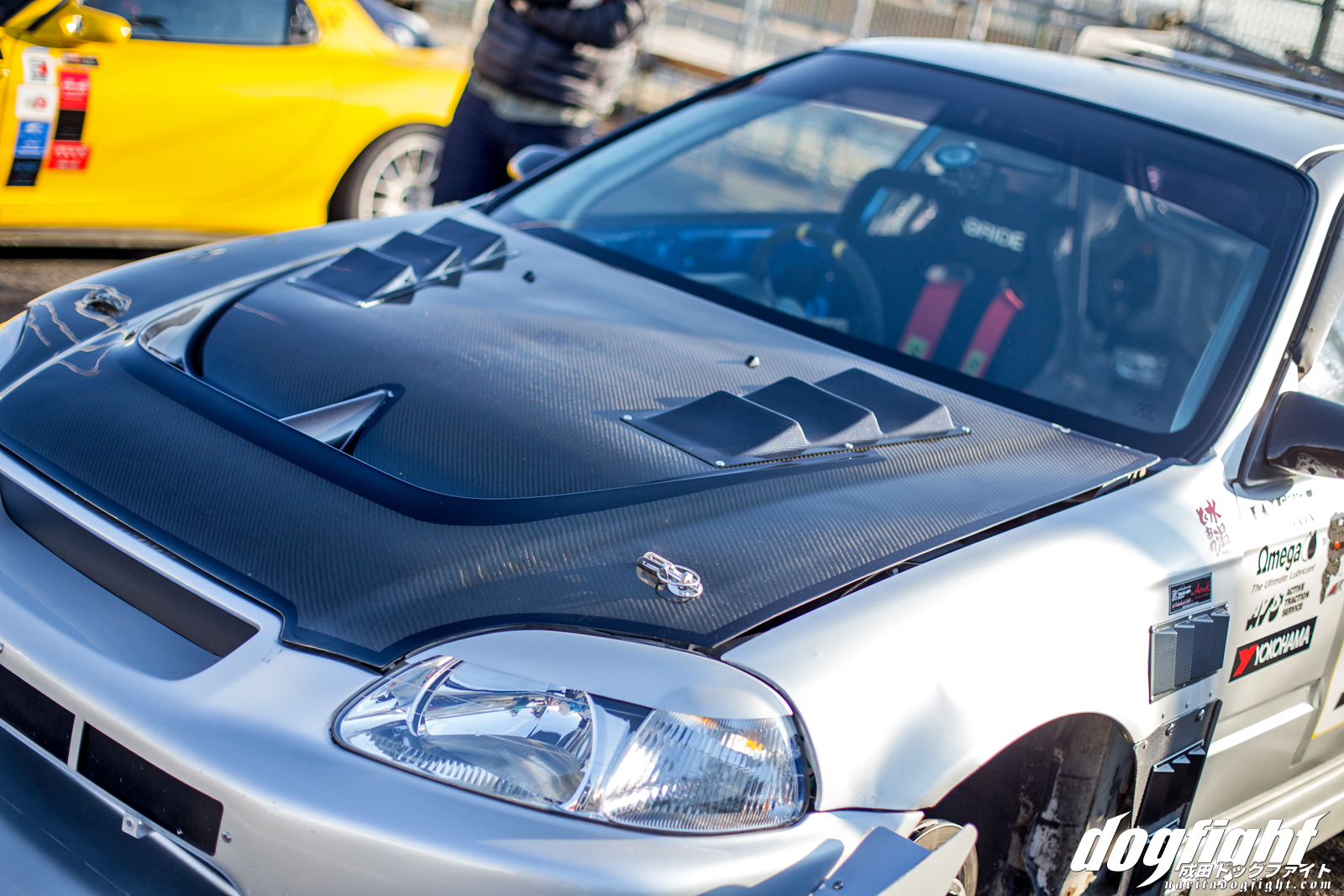 Judging by this view, you would never guess that underneath the vented, carbon bonnet lies a very, unusually normal motor.

Save weight wherever you can!  The carbon wingserts allow adjustability to the oversized GT wing on top of the hatch.

A 6-point roll cage gives Makoto the added safety that you don’t typically find in builds like this.  The cage does add weight, but you can’t put a price on safety.  Despite this, the car weighs in at a tremendously lightweight 804kg (about 1770 pounds). 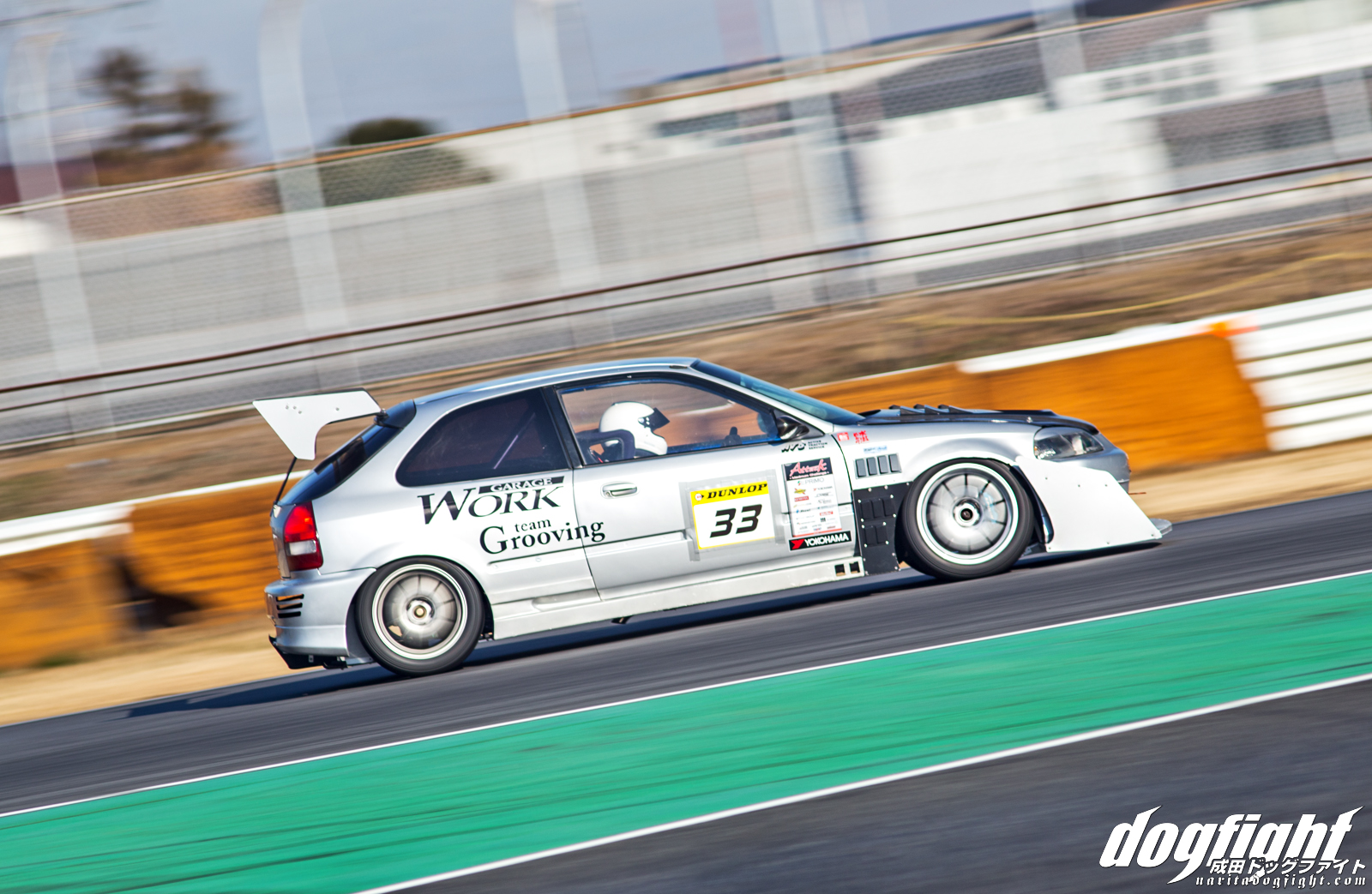 Offset sized Volk CE28’s house the Dunlop Direzza ZII Star Specs that he chooses to take on Tsukuba with during the Direzza challenges, and the Advan A050’s for when he’s going for a PB. 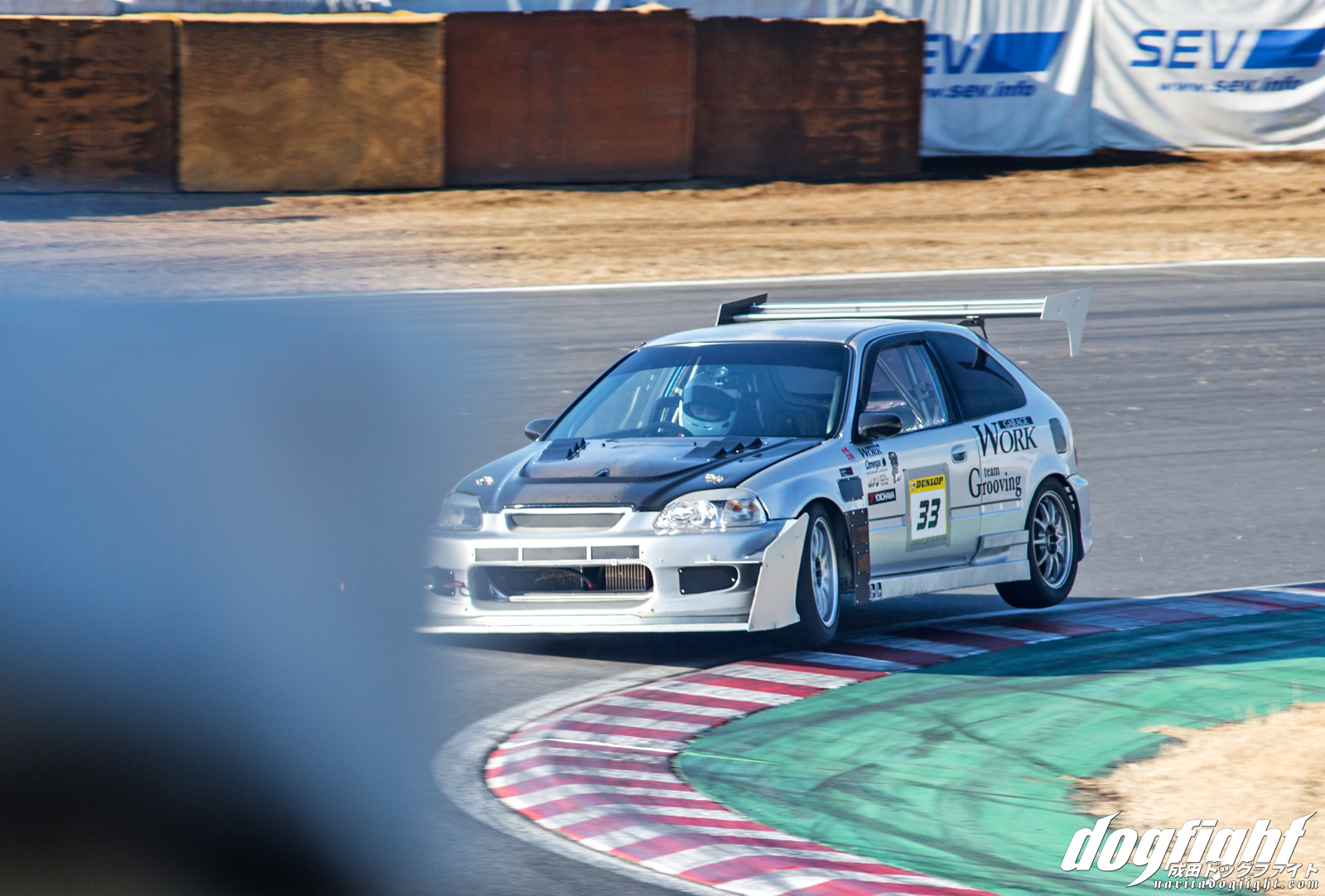 Check out those stiff spring rates – almost on two wheels around the first hairpin. 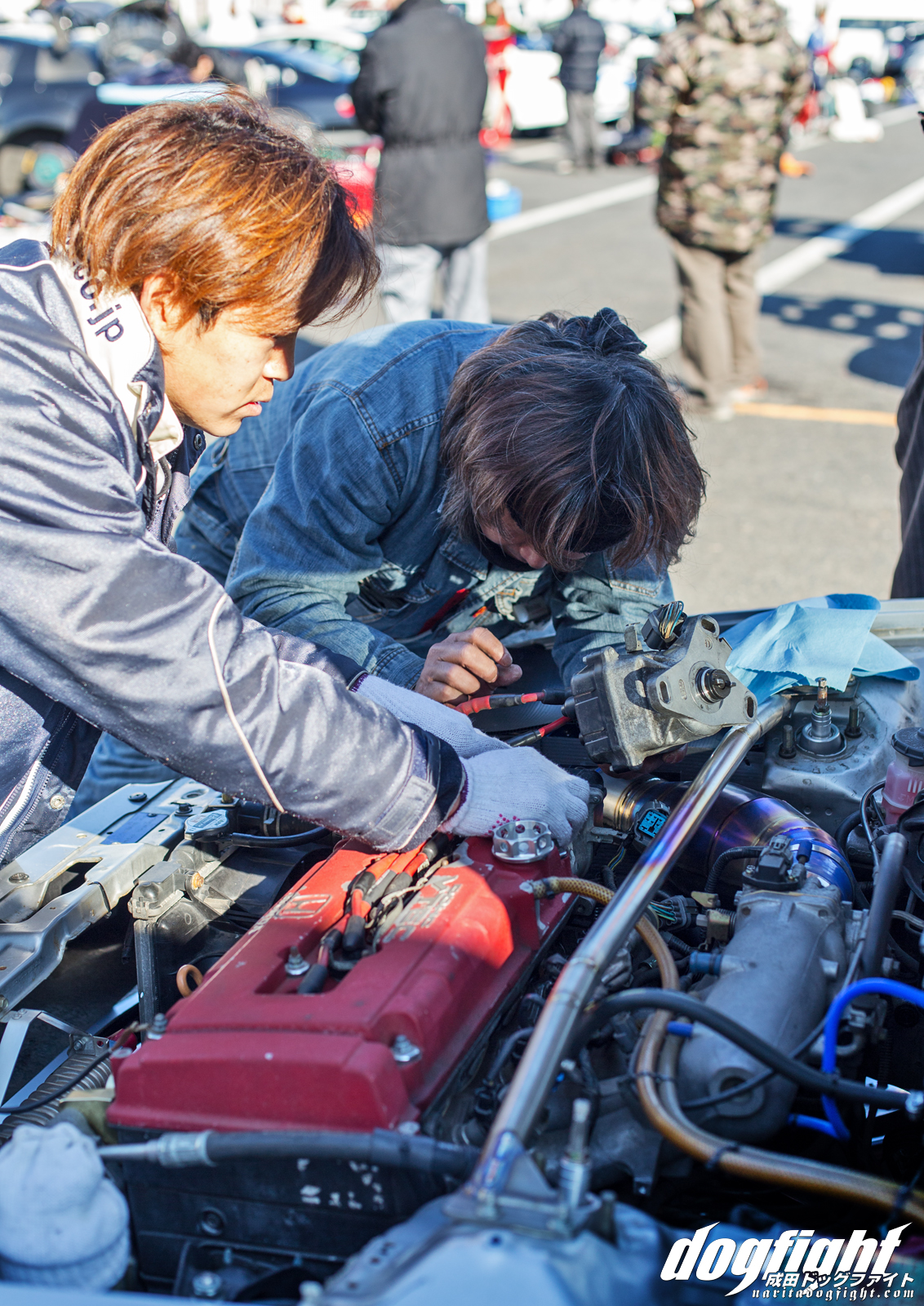 Quick pit stop at the Evome event in January, as Iwata and Kubo diagnose an ignition issue with the motor.  The issue ended up being a bad MAP sensor that ended Makoto’s day early.  He still managed to grab a 1’01.515 – 1.5 seconds off his goal. 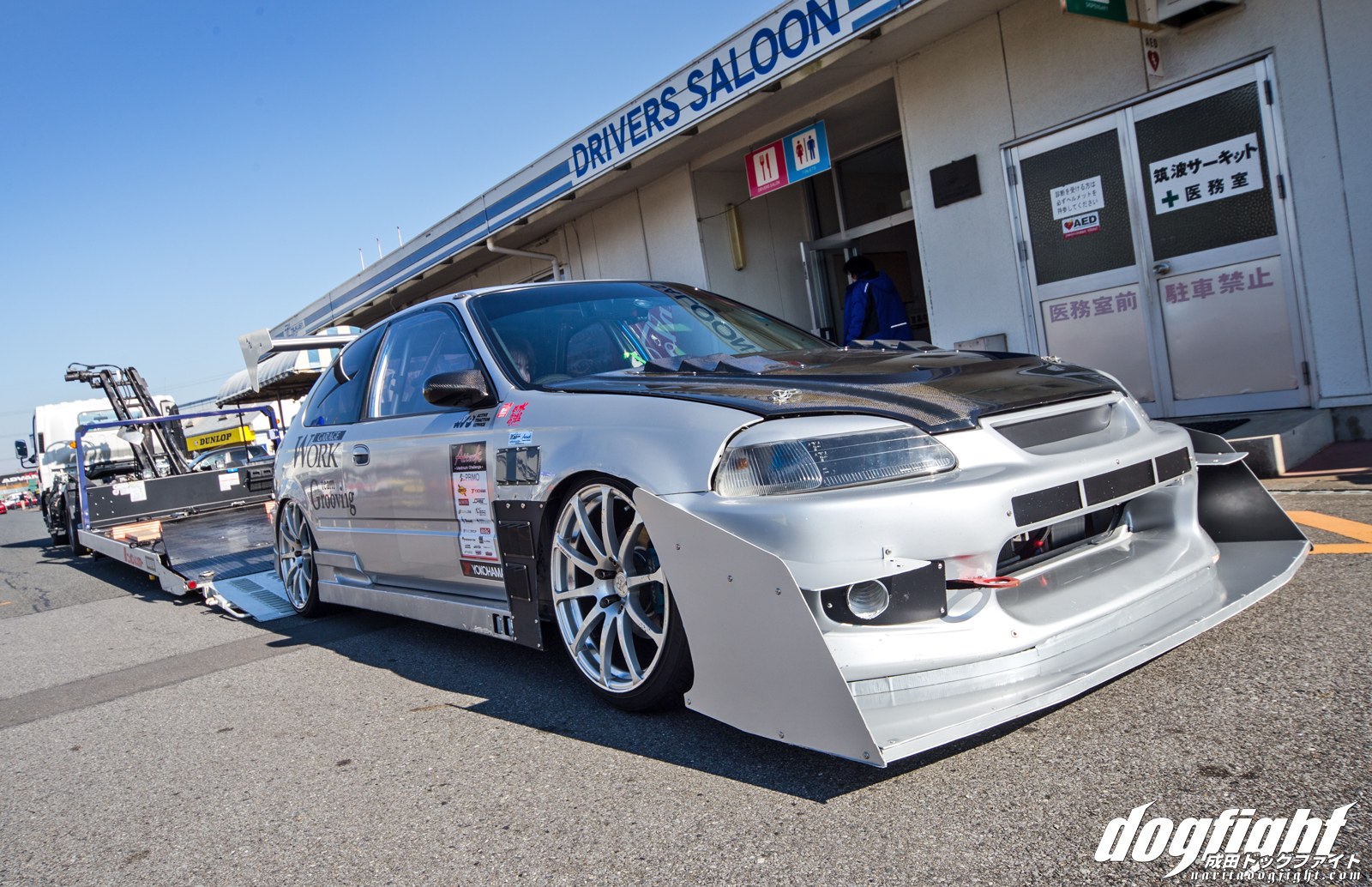 He mentioned that he may have been able to squeeze a couple more tenths out of the car that day if he didn’t have the electrical issues.

No doubt that he’ll continue to find ways to cut time around Tsukuba, and I’d say by next season he’ll have a fighting chance at achieving his goal.  Good luck まこっち ~!