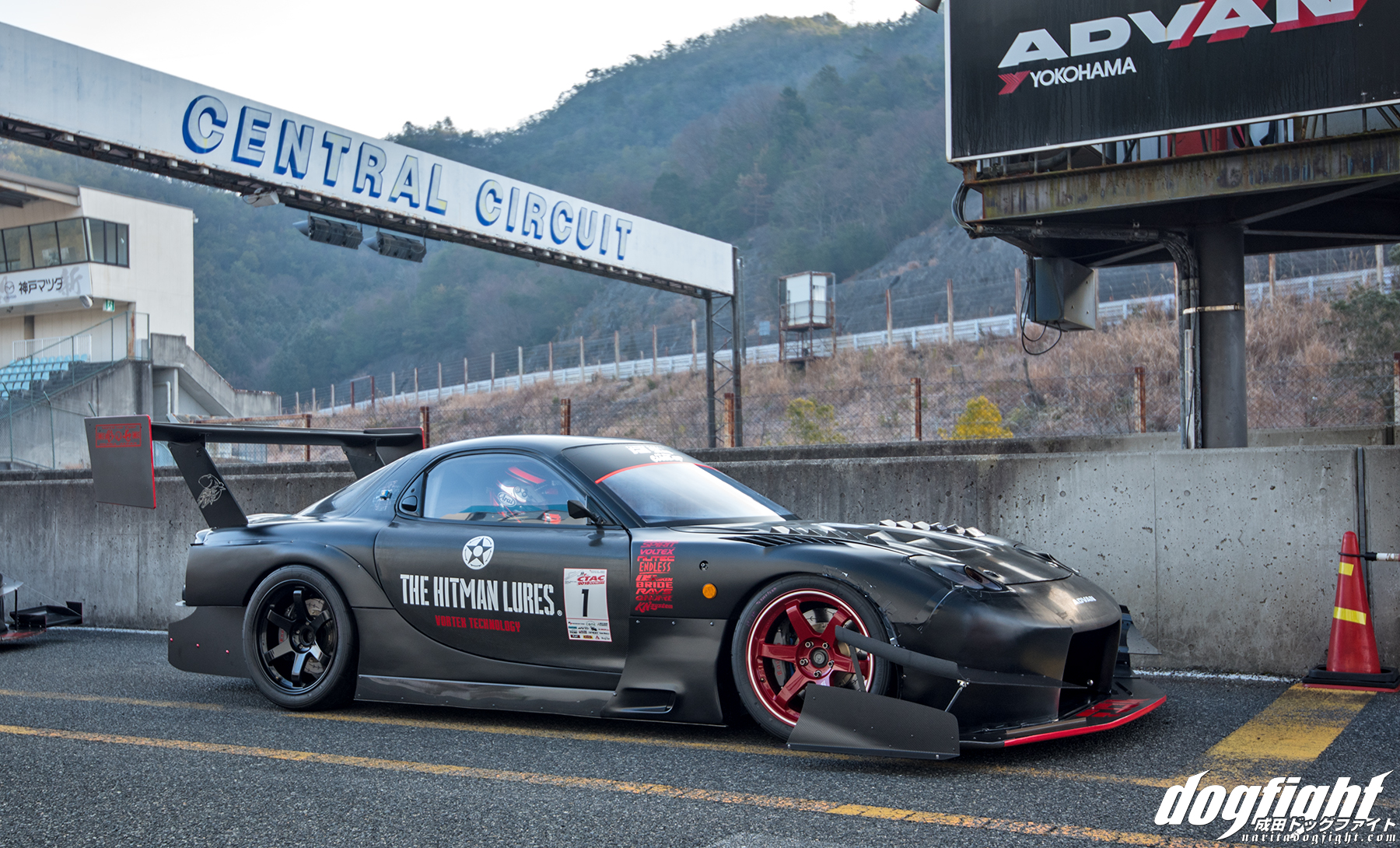 Continuing coverage from Central Circuit, we’ll take a look at the podium finishers of the day, and a few of the close runner-ups.  While most everyone in the Vertex classes were quick, I was surprised at where some of the cars landed on the time sheets.  I think my perception of who was fast at Central was a bit skewed from the events held in prior years.  If I’m not mistaken, Iwata took fastest lap a few years ago before he crashed the EG at TC2000.  Seems like the Kansai guys have been doing their homework recently though.

I apologize for this taking so long to get published, and I know you’ve heard this excuse before, but I’ve been overwhelmingly busy since getting back to the states.  Seems like I’m always two steps behind in everything that is going on, and eventually something has to suffer for it; but I digress.  Let’s get into the second round of coverage for the event; albeit rather late.  Sekinei wrote a small summation of our experience for our Japanese subscribers.  It outlines the event as one where the Kansai boys were dominant, and how easily it showed on the time sheets.

I figured that I would just pour through the results starting with the two Vertex classes; Turbo and Naturally Aspirated.  Obviously the cars with more power reflected faster times, but it was cool to see the N/A frontrunners falling in the upper-middle times from the Vertex TB class.  It’s a tangible example of the power vs. weight debate. 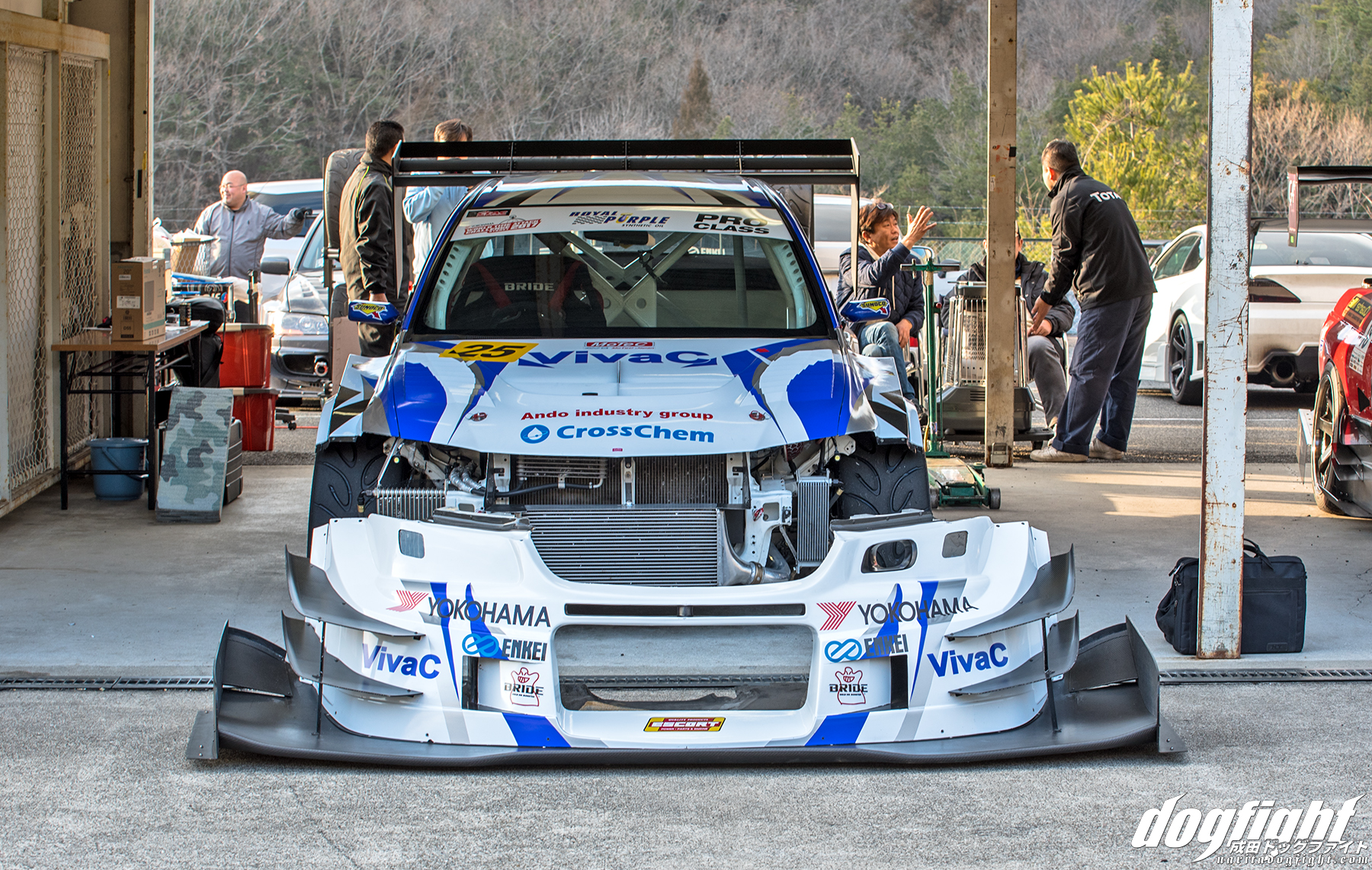 With no doubt in anyone’s minds, the winner of the Vertex TB class was going to be Fire Ando and his VivaC EVO9; and he fulfilled that by a long shot.  Fresh back from WTAC, he proved the cars success in development with a new Central Circuit course record.  Crossing the finish with a best time of 1:14.322, he was nearly 3 seconds faster than the second place finisher.  Nobody even stood a chance…

The team’s preparation also took first place, at least my perception of it, no other team had the resources on hand that Ando did.  I guess that’s what it takes to compete on a global scale; why treat any other event differently? 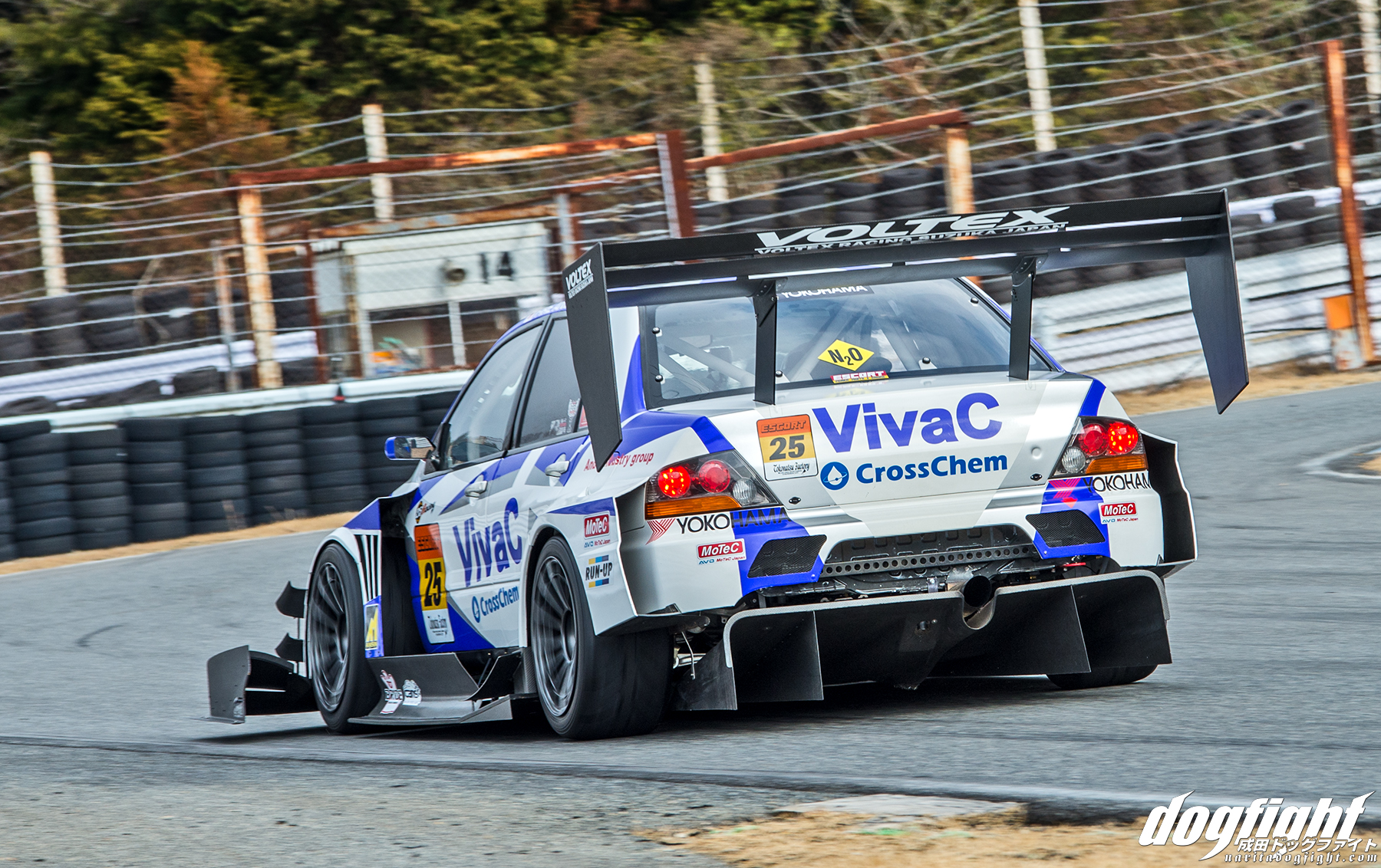 The car looked to be in great form all day. 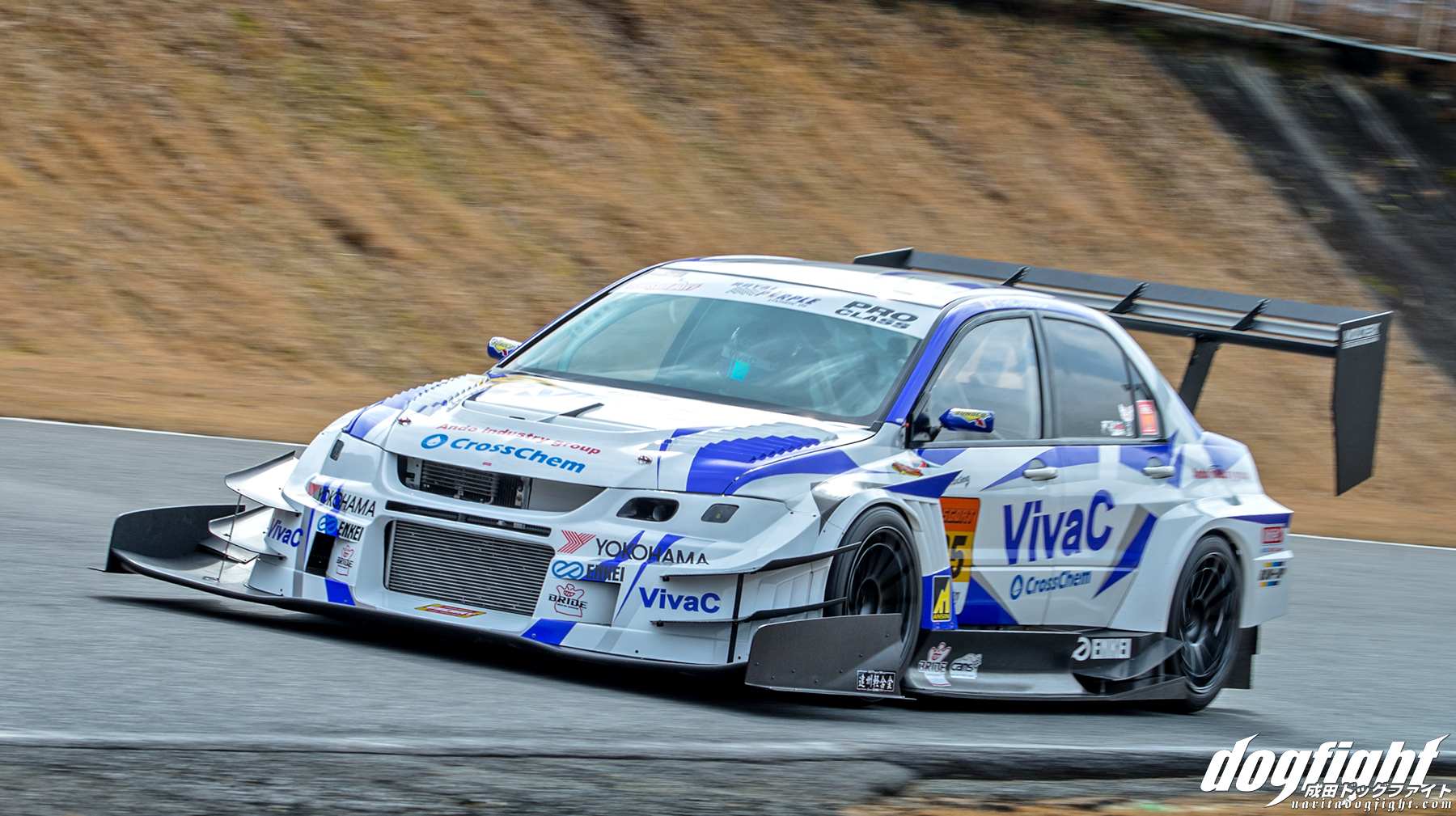 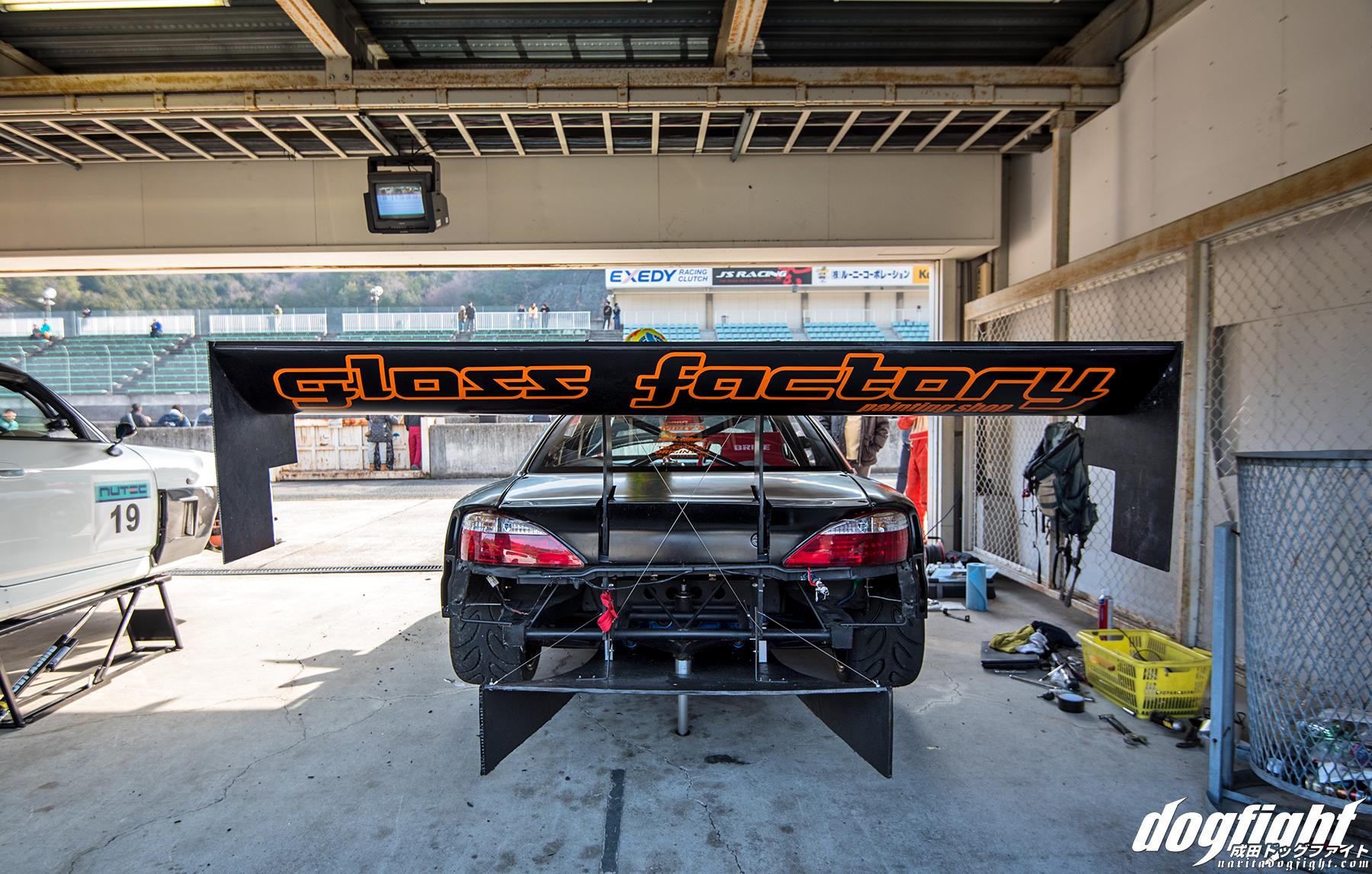 One car that took me by surprise was the Gloss Factory S15.  I think because I wasn’t quite sure just how competitive it was.  This was my first time seeing it in person, and it is every bit wild in person as it is in pictures, I can tell you that.  The car is a re-purposed drift car turned time attack; which isn’t something that happens all that often.  I’d say the team were successful in the transition however, as the Silvia clocked a 1:17.155 around the circuit putting them in a healthy second place in the class. 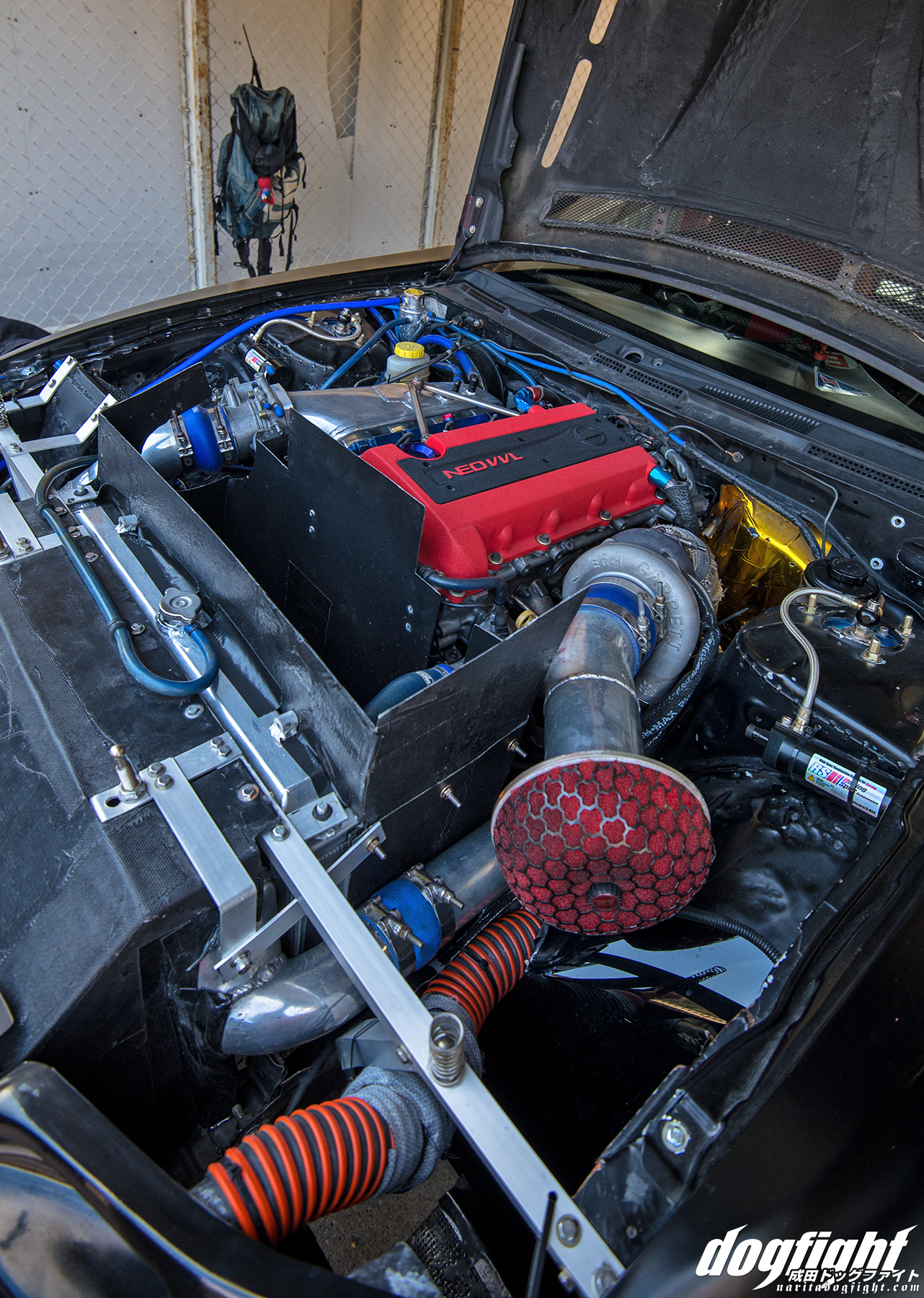 The SR is producing much more power now, and has a ducted intercooler and radiator setup. 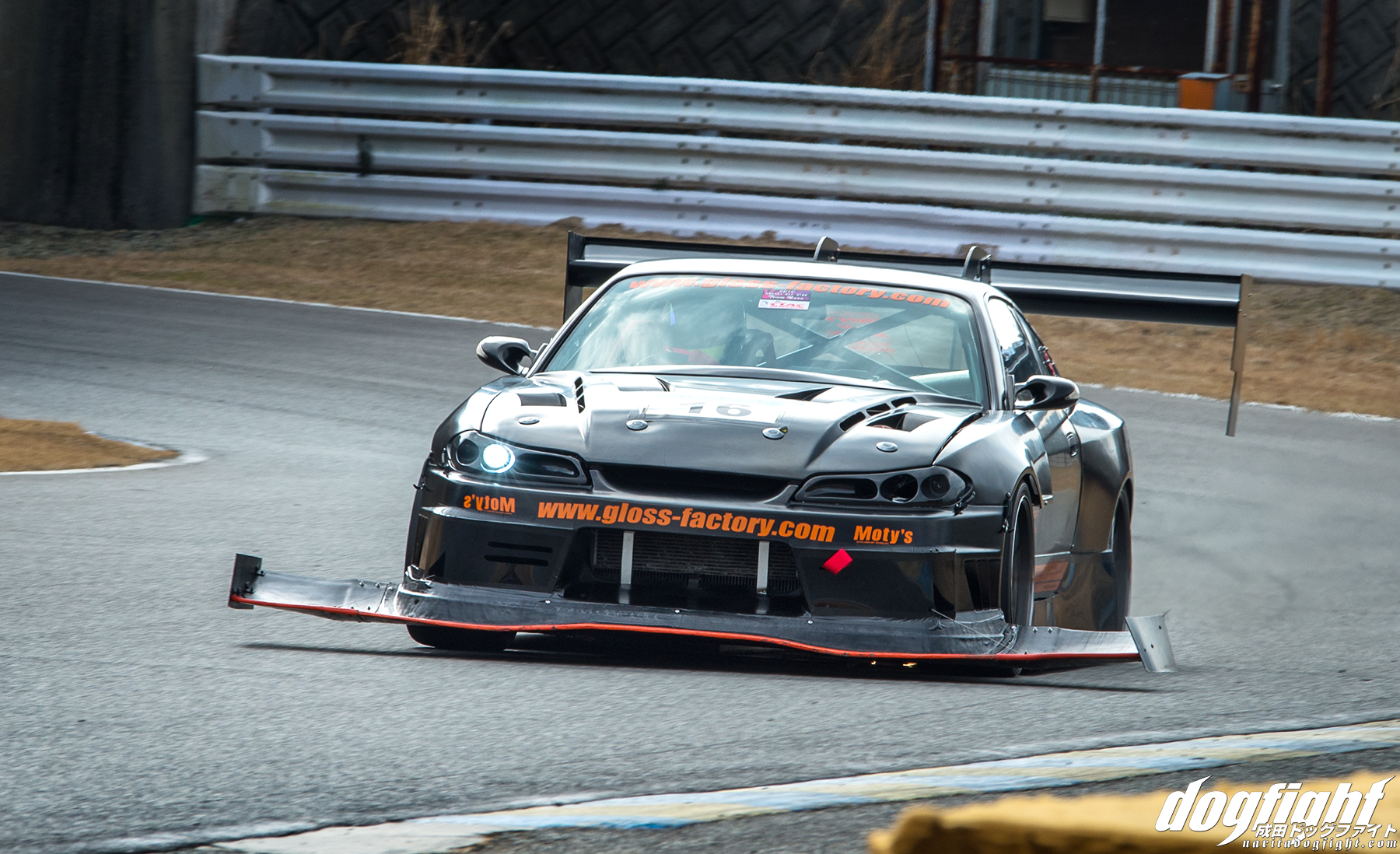 The massive front splitter is proportional to the even larger rear wing atop the trunk. 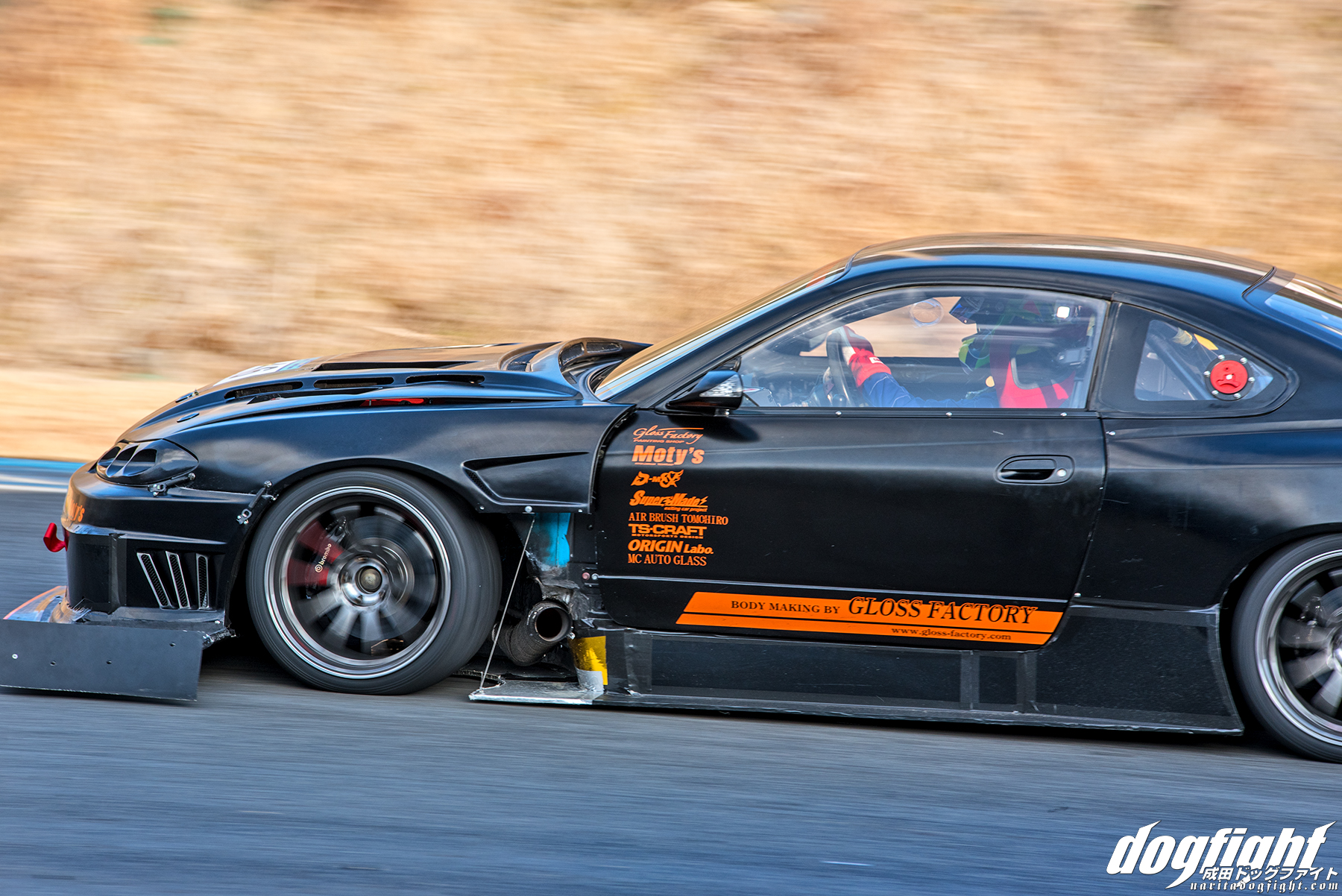 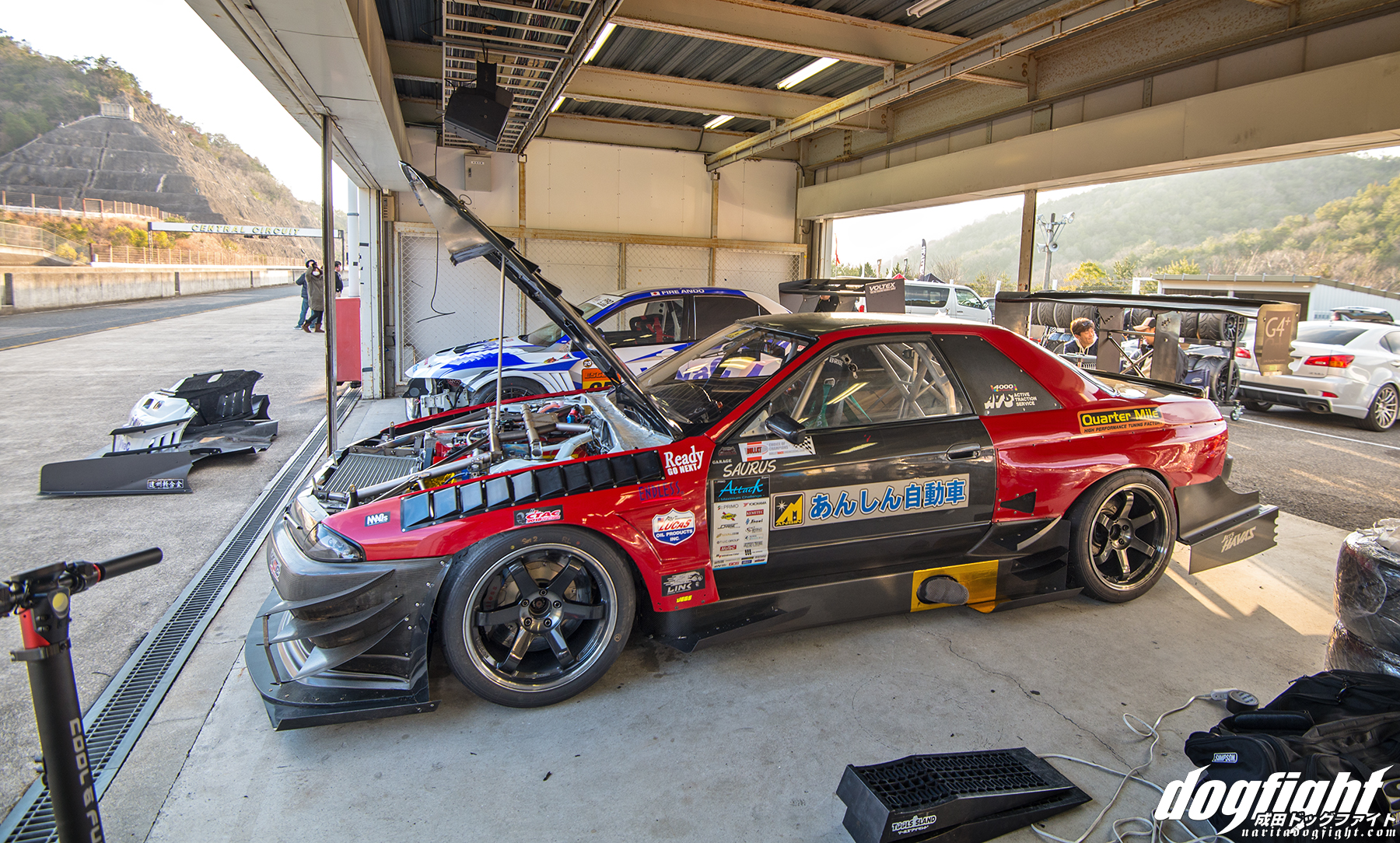 The Anshin squeaked by and took the third place on the podium.  They set the time in the first session, and consequently their last as the car was beset with mechanical issues almost before the sun was even up.  They put in one hot lap and grabbed a 1:17.919 – only 5 one hundredths of a second ahead of the Full Stage FD.  I can imagine if they had more of the day they could have gotten the car a bit deeper into the 17’s. 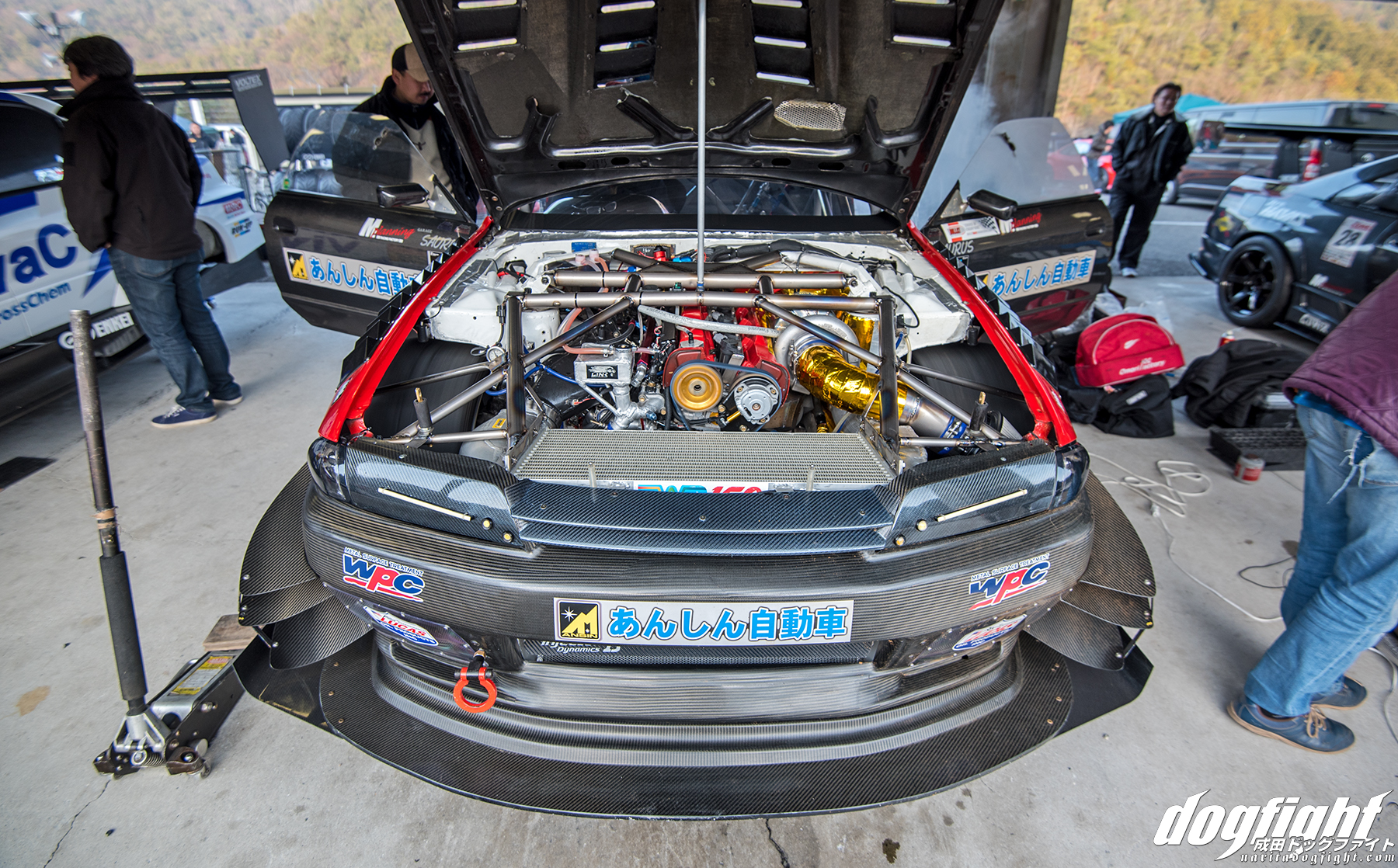 The cars exterior is rather interesting, but I’ve always been a fan of this cars engine bay (sans the radiator overflow – not sure what happened with that).  The titanium bracing is super cool. 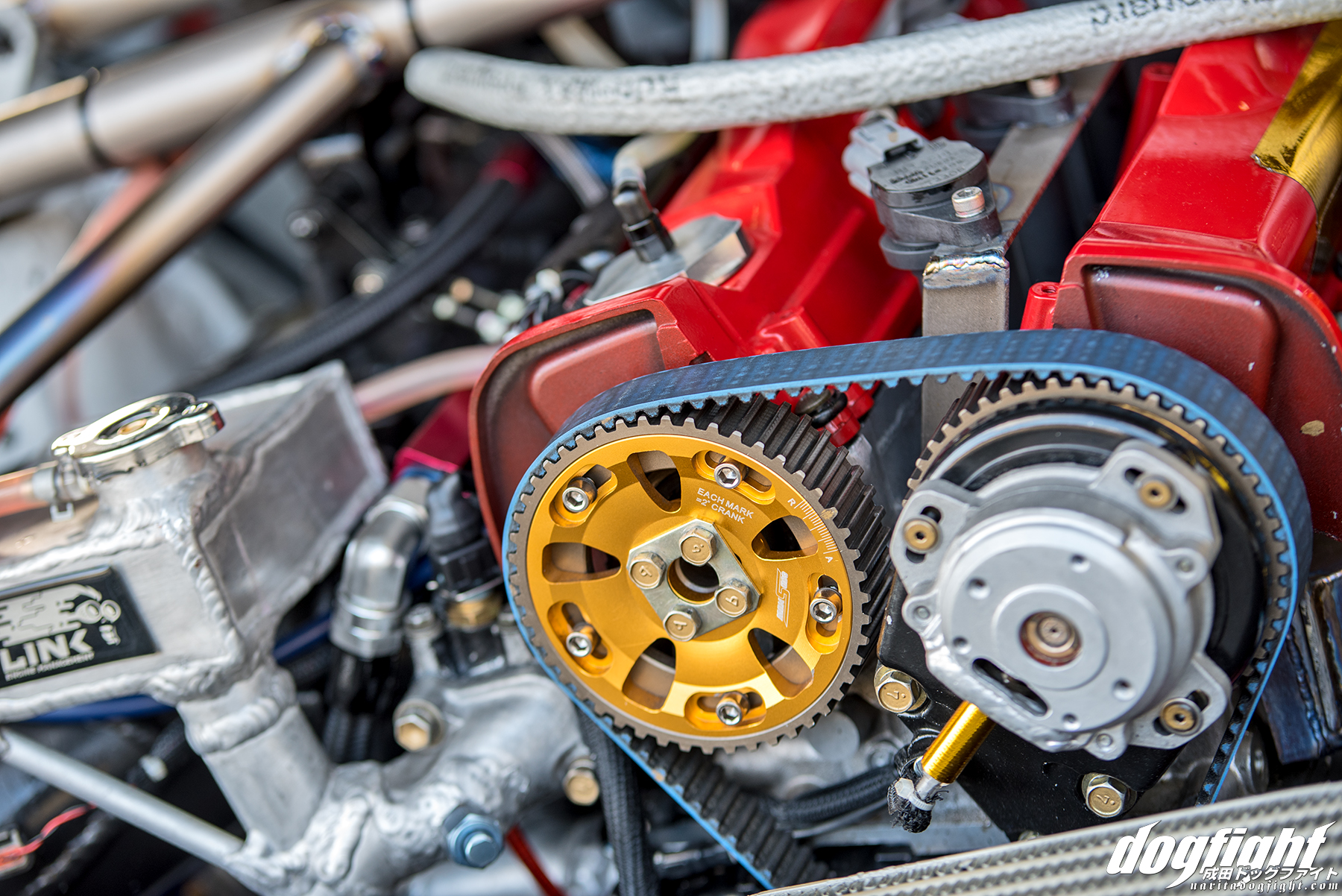 Not to mention the Billet aluminum block RB26 makes almost 930 horsepower.  The car may look different, but it’s 55:876 time at TC2000 is nothing to laugh about. 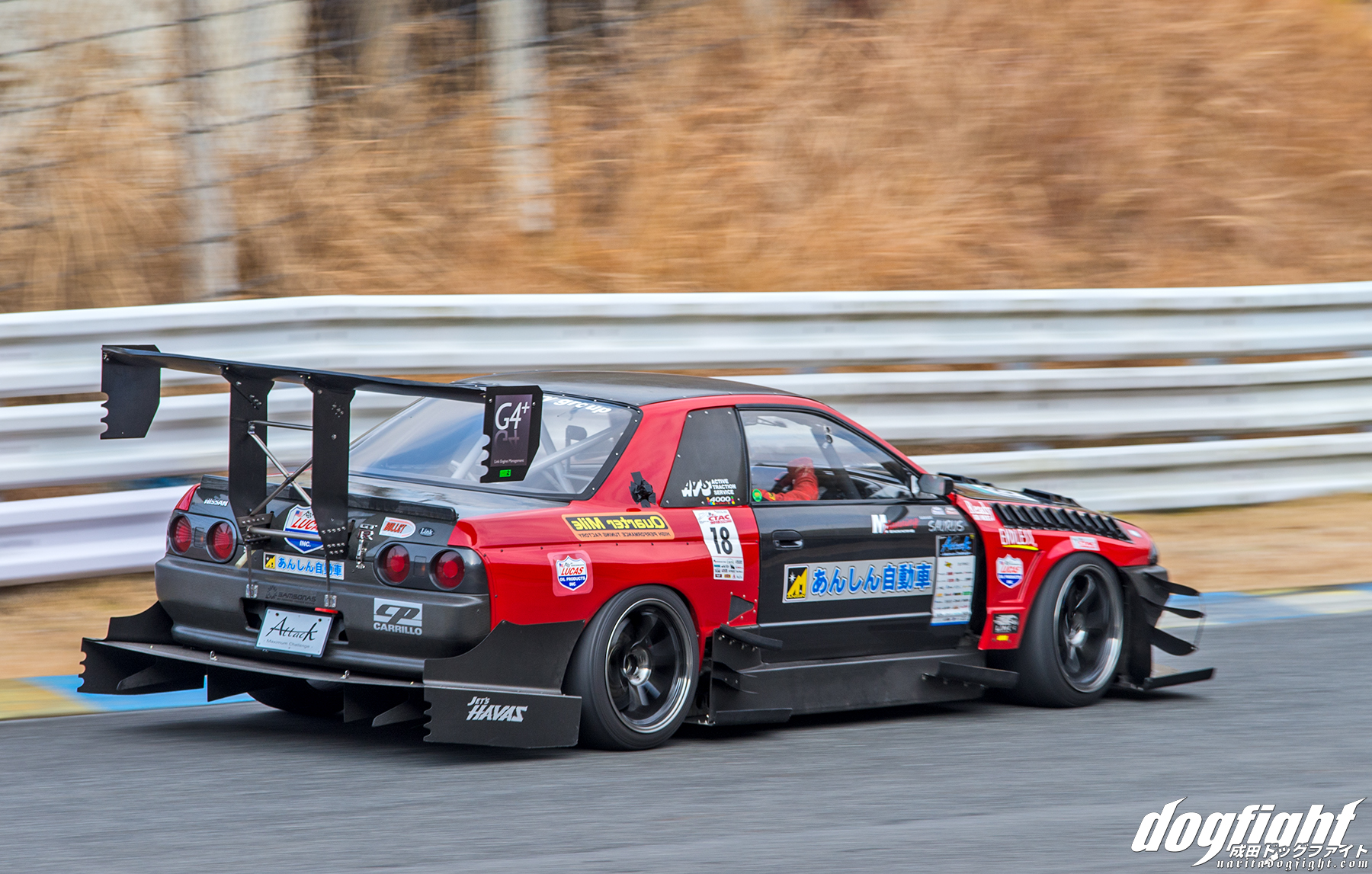 Only time I saw it on track!  Next lap around it was being towed off by the CTOC SUV. 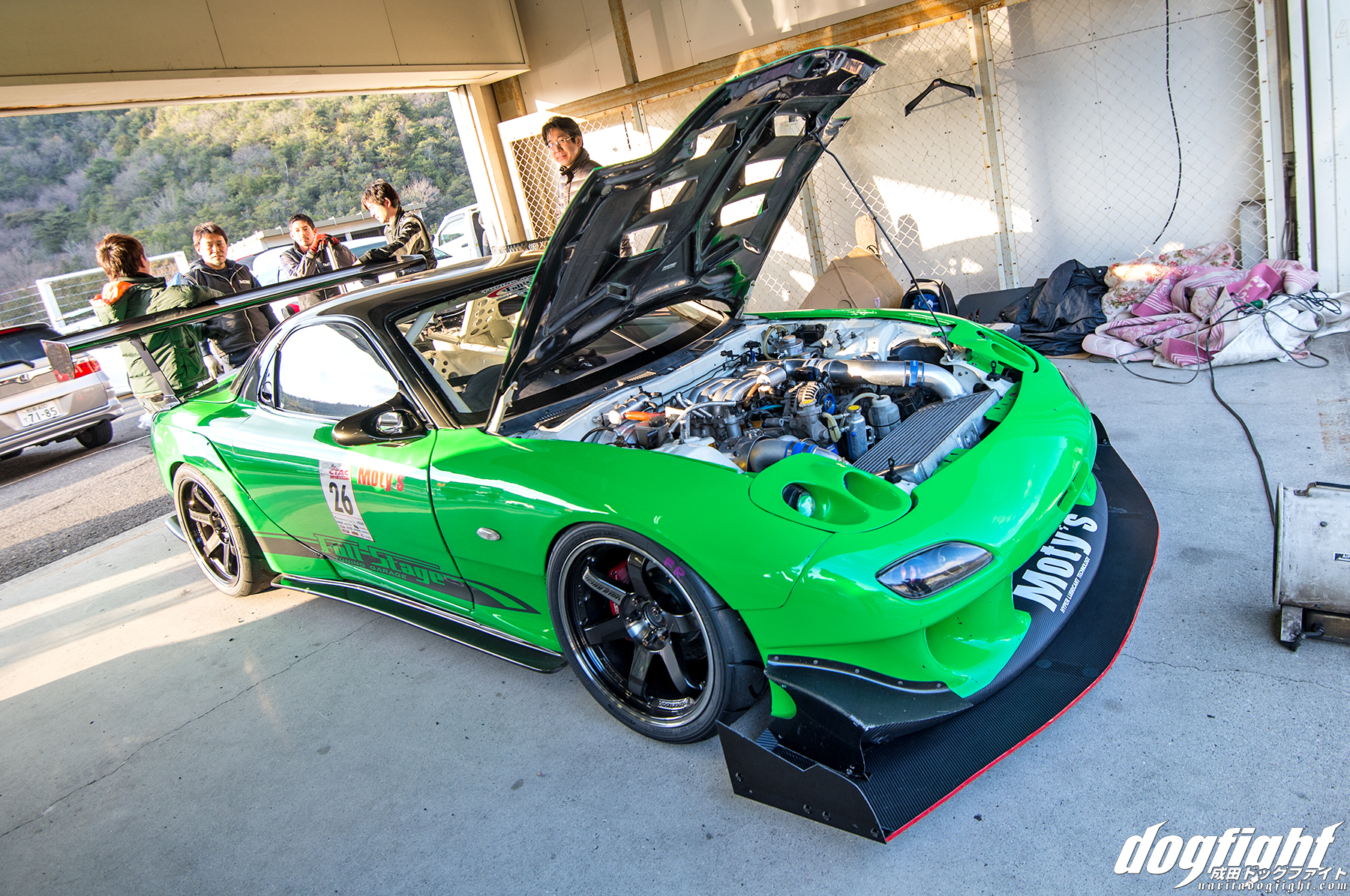 The aforementioned Full Stage FD.  The bright green RX-7 drove for a 1:17.963 ultimately taking fourth in the class.  A good effort that almost resulted in a podium finish. 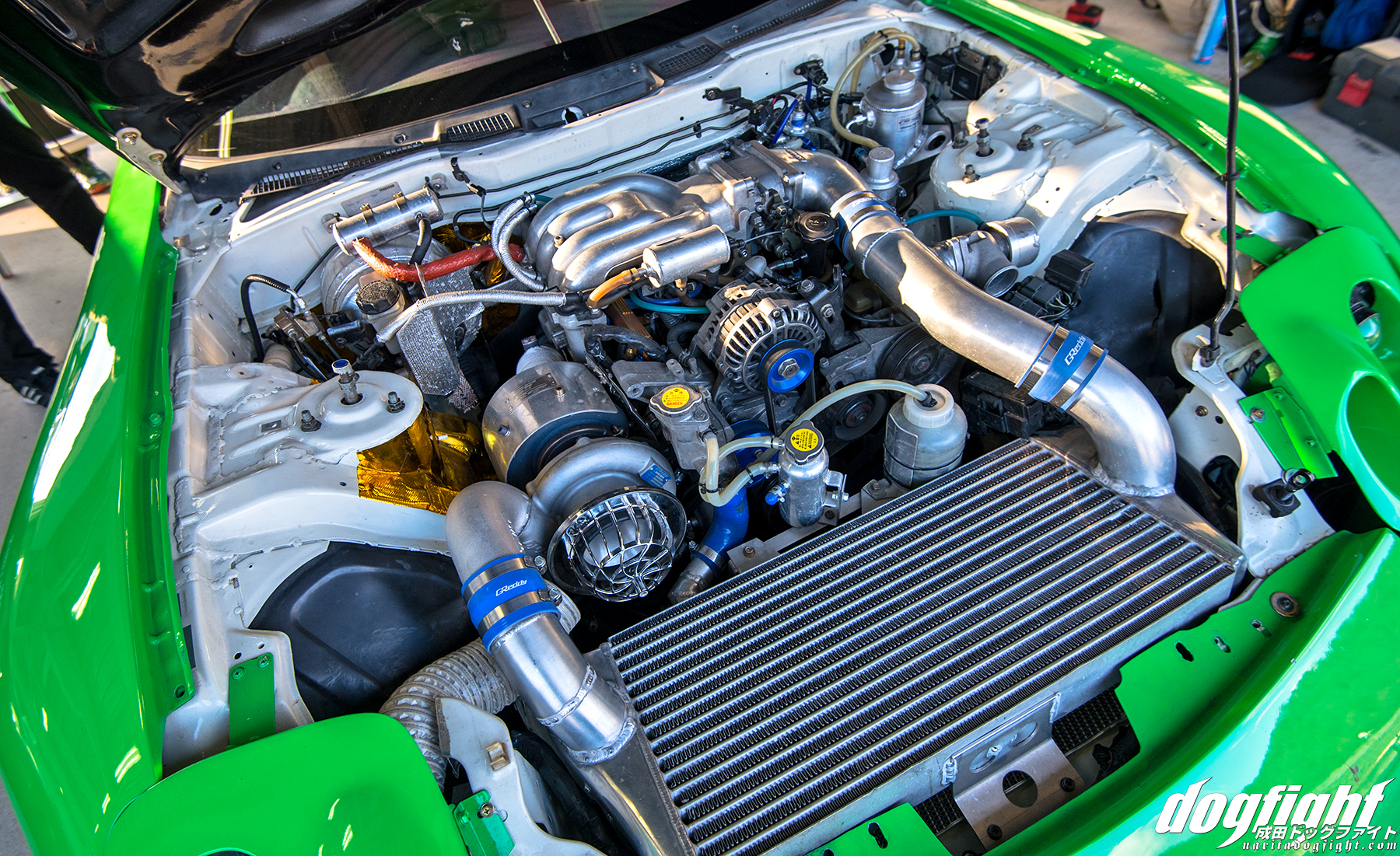 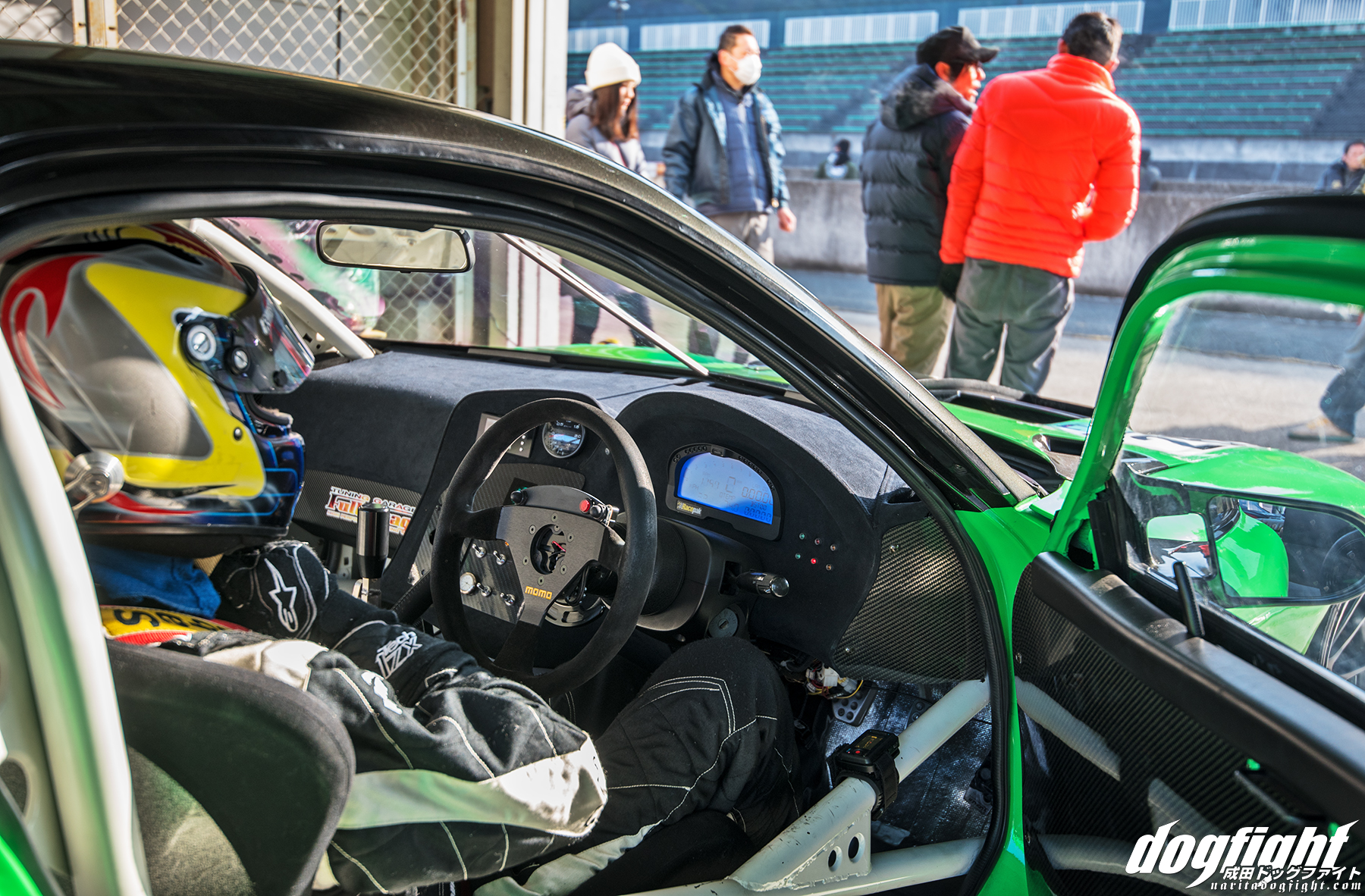 Full Stage is the shop responsible for ‘Sharks’ N/A 20B build and their work is always top notch.  This car is no exception and everything from the interior to the bay is very clean. 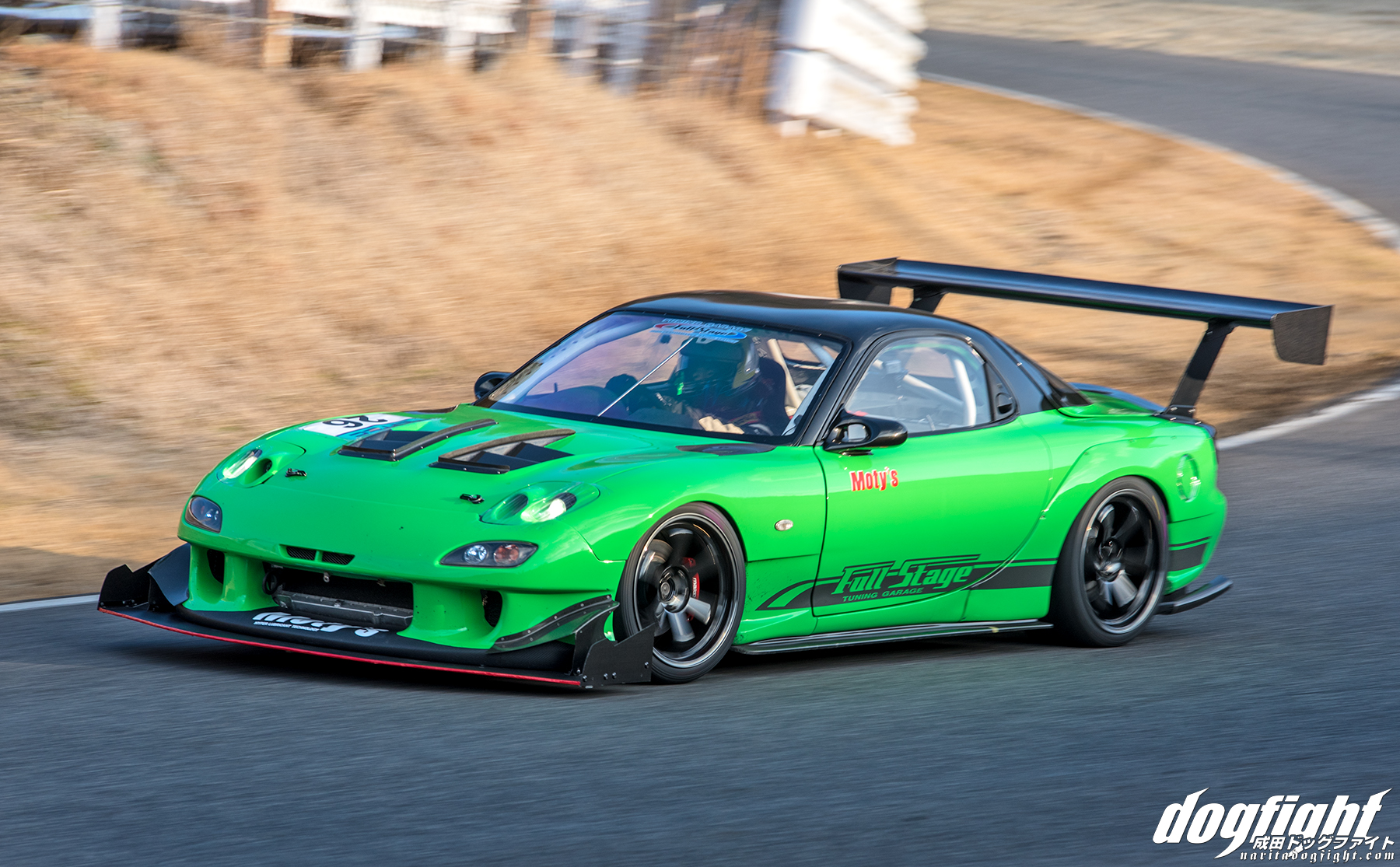 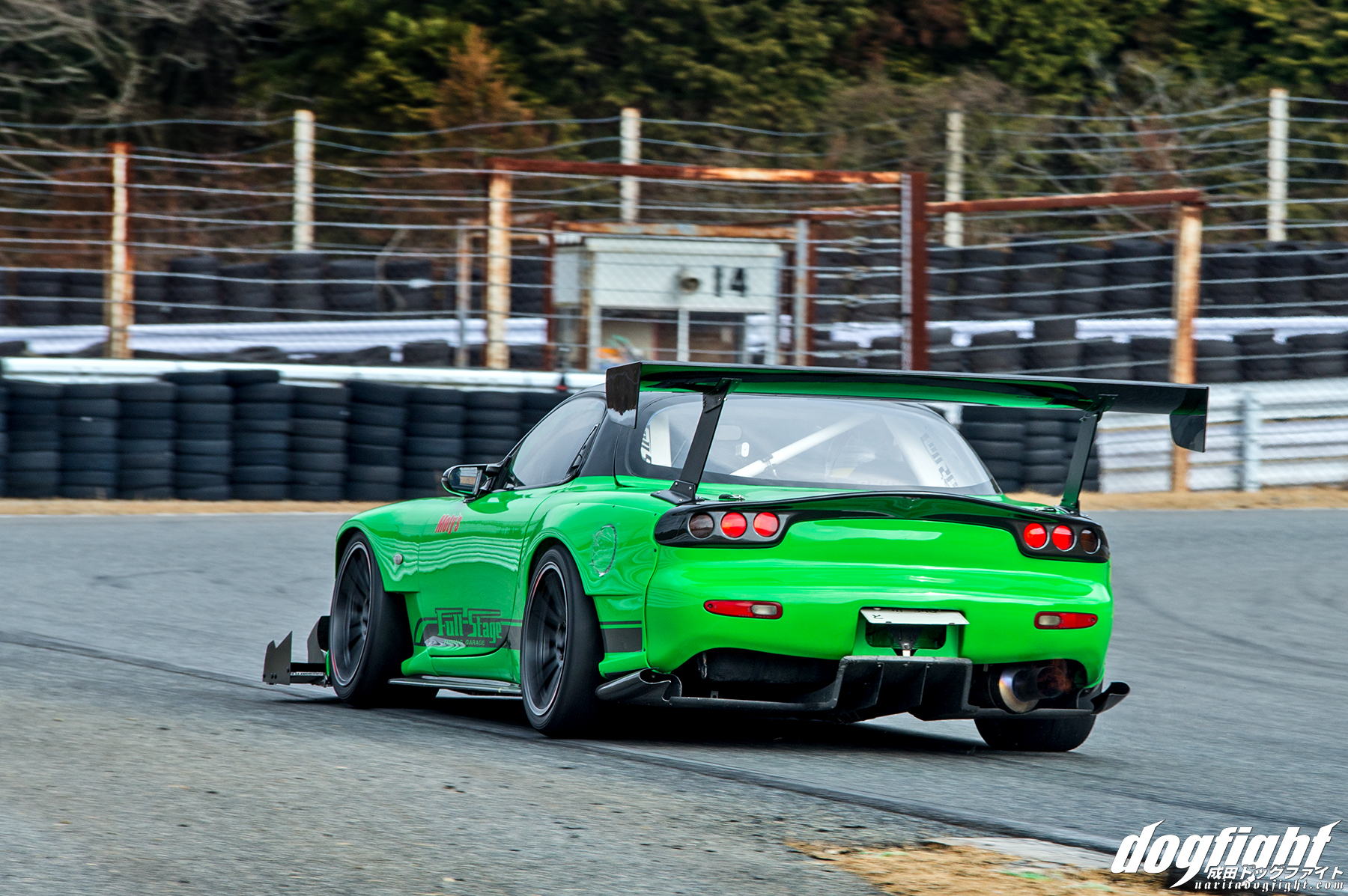 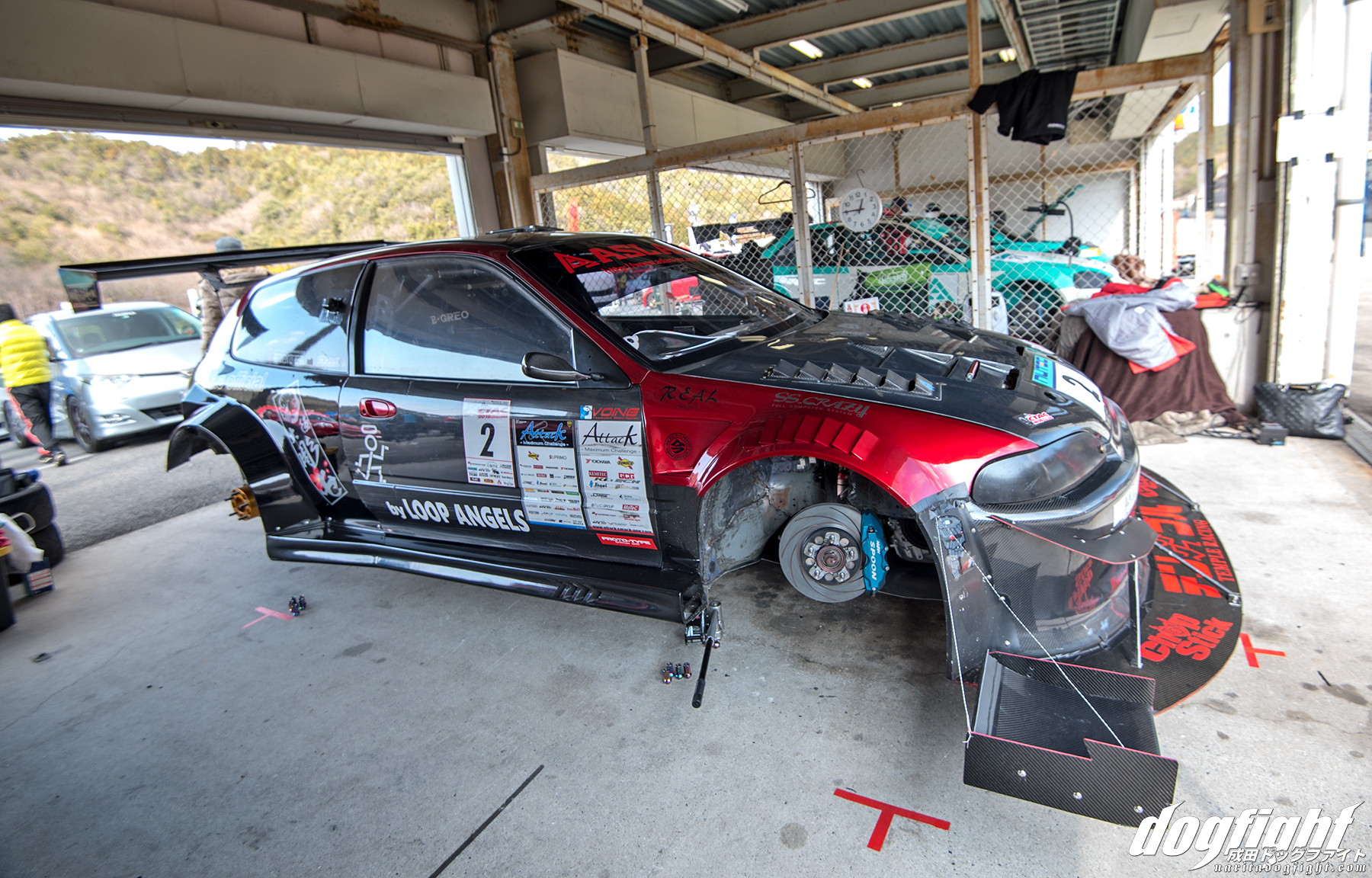 The Vertex NA class was just as competitive, with the difference between first and second a mere .277 of a second.  Ton and his K20 powered Aslan EG6 topped the timesheets at the end of the day with 1:18.746.  Ton and his team have developed this car quite a bit in the last year and I’m really looking forward to seeing what they can do at TC2000 in a couple weeks.  The battle I’ll be watching his with this car and Yusuke in the Garage Work EK4 to see if he can retain his title at Tsukuba as the fastest FWD N/A. 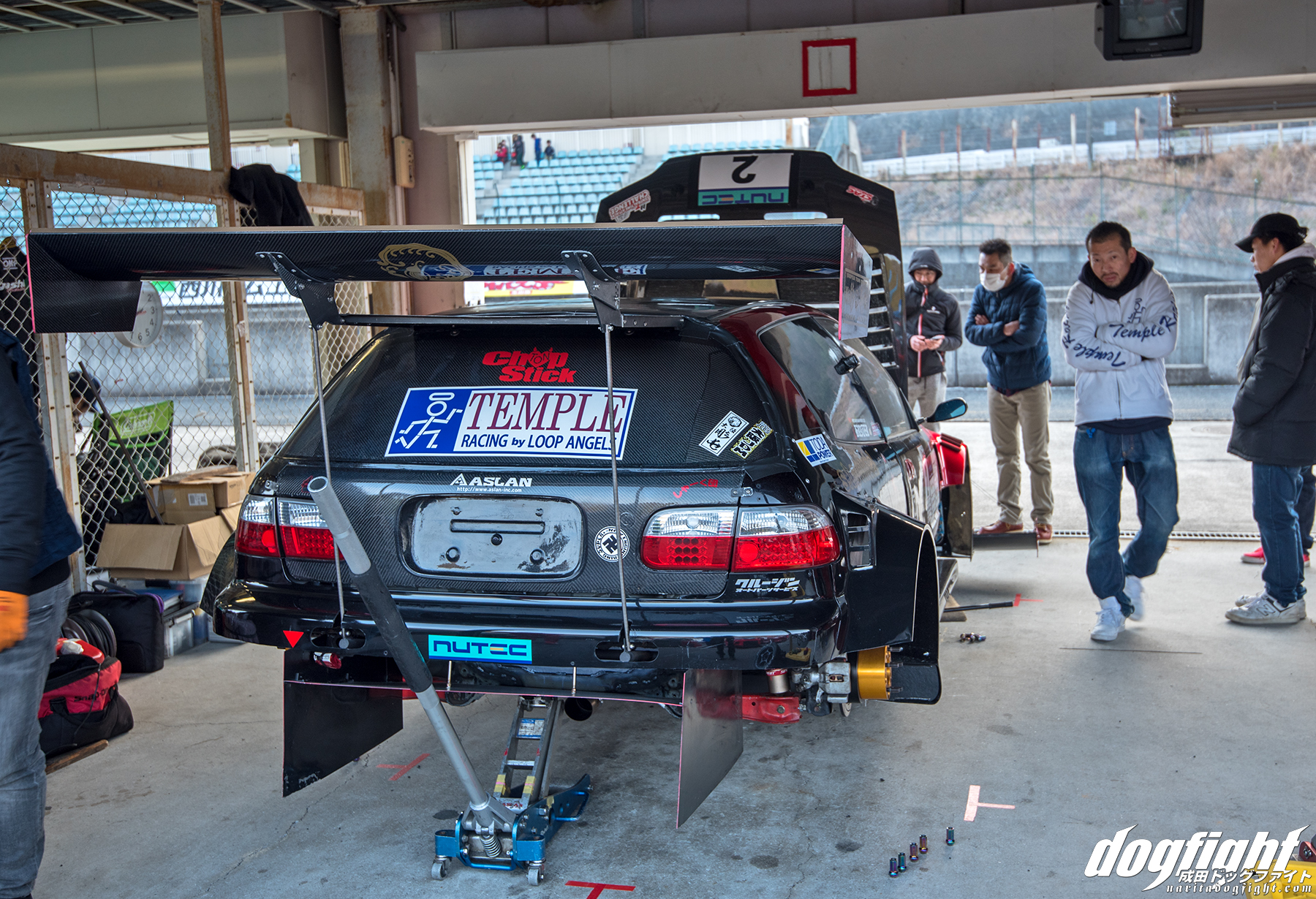 Everything went well for the team here in Kansai with all the Aslan cars doing quite well for themselves. 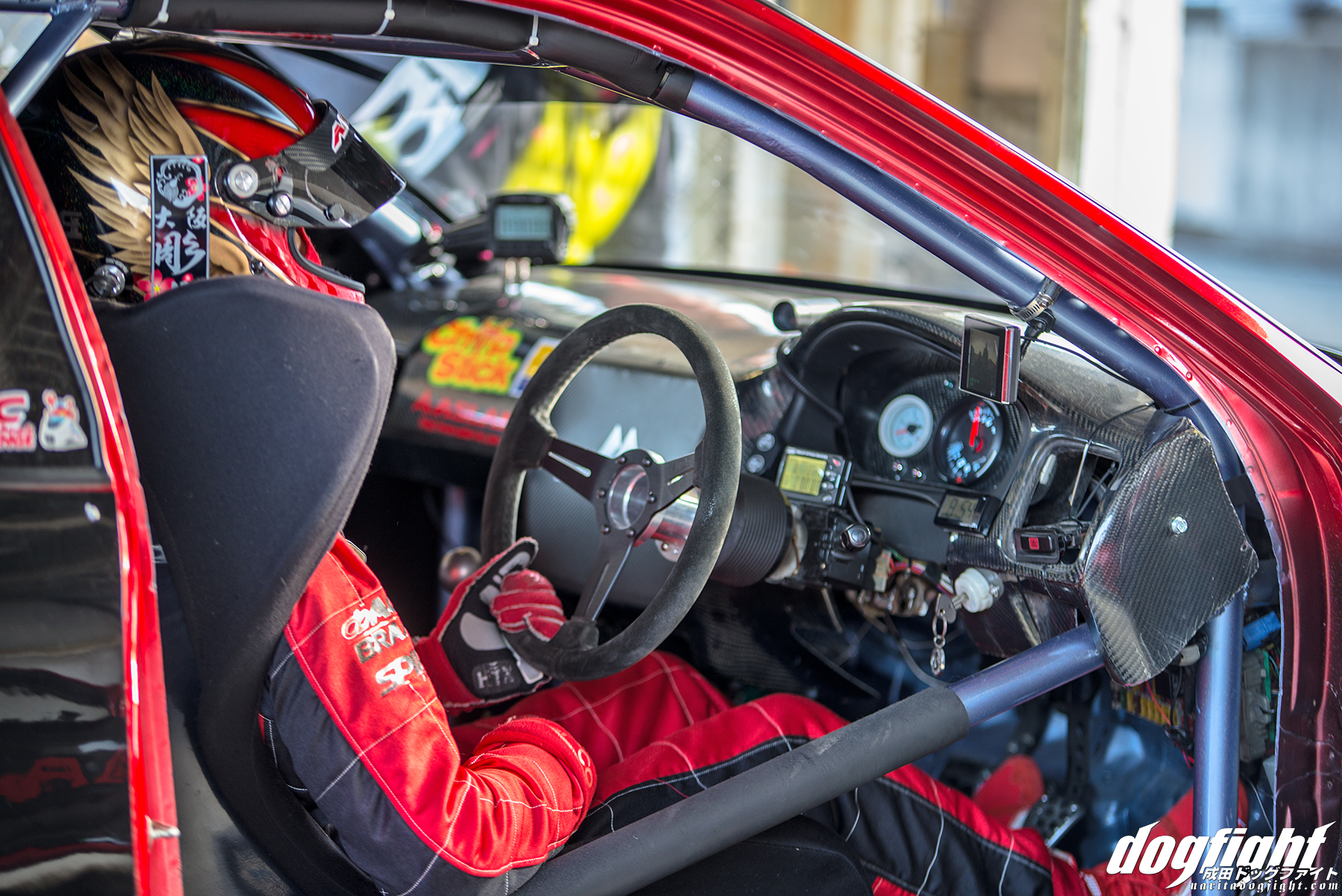 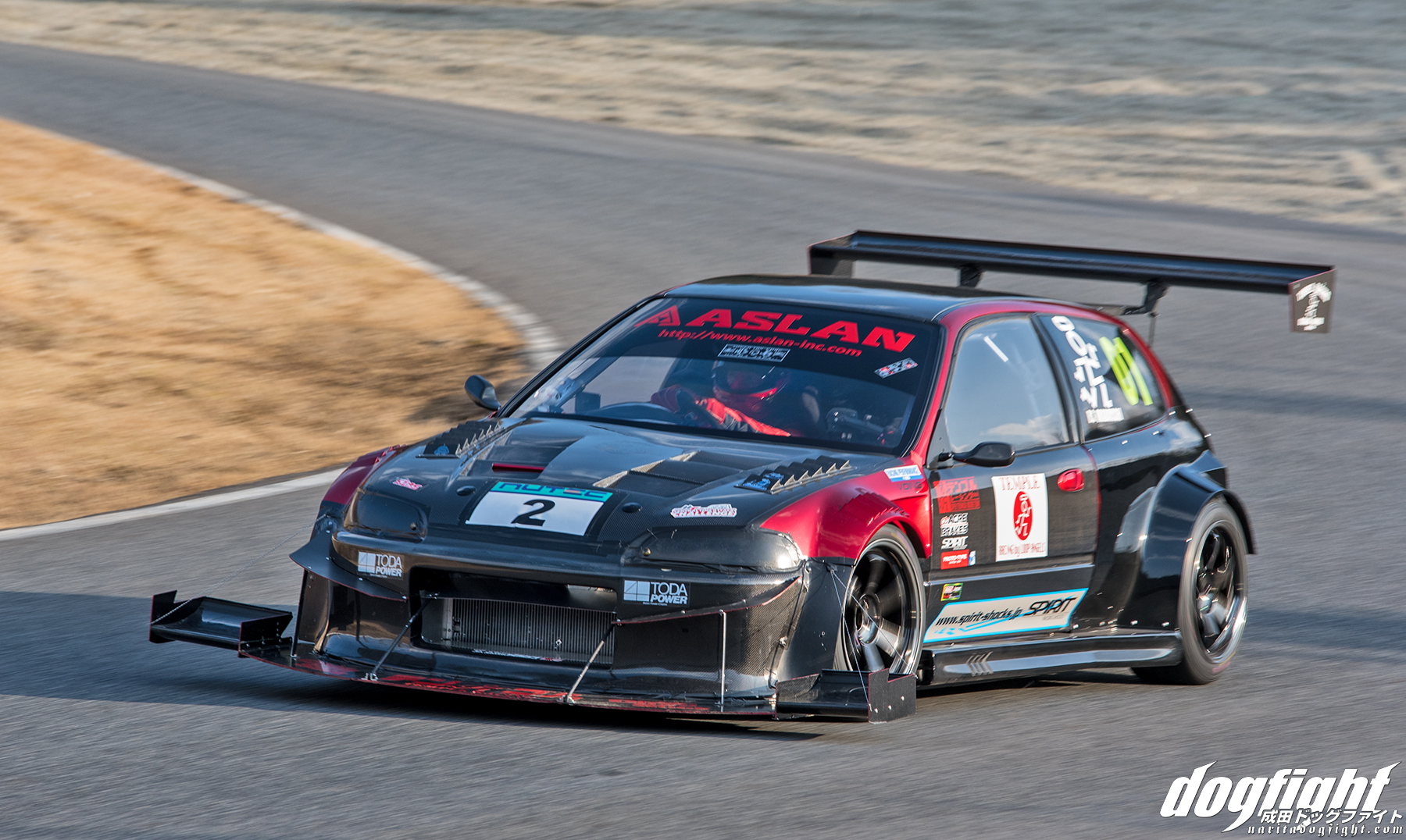 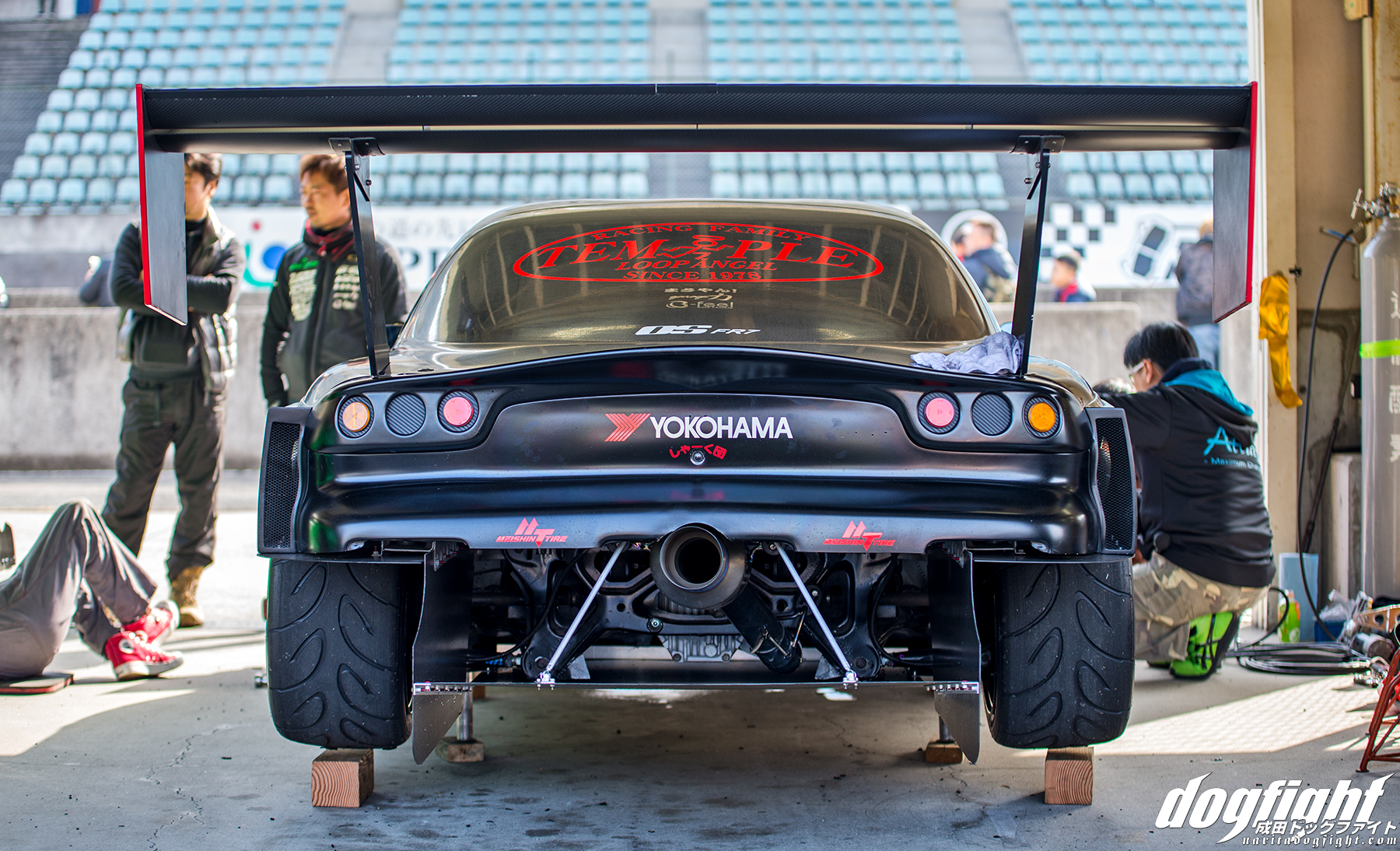 The ‘Shark’ didn’t take too many passes around the track, but didn’t really need to in order to secure their second place in the N/A class.  A best lap of 1:19.023 put them just a few tenths behind Ton.  They had just previously set a new record at TC2000, and I’m wondering if they had time to change the setup to better suit Central.  It may have something to do with their second place finish, because on paper, this car should be faster by a long shot. 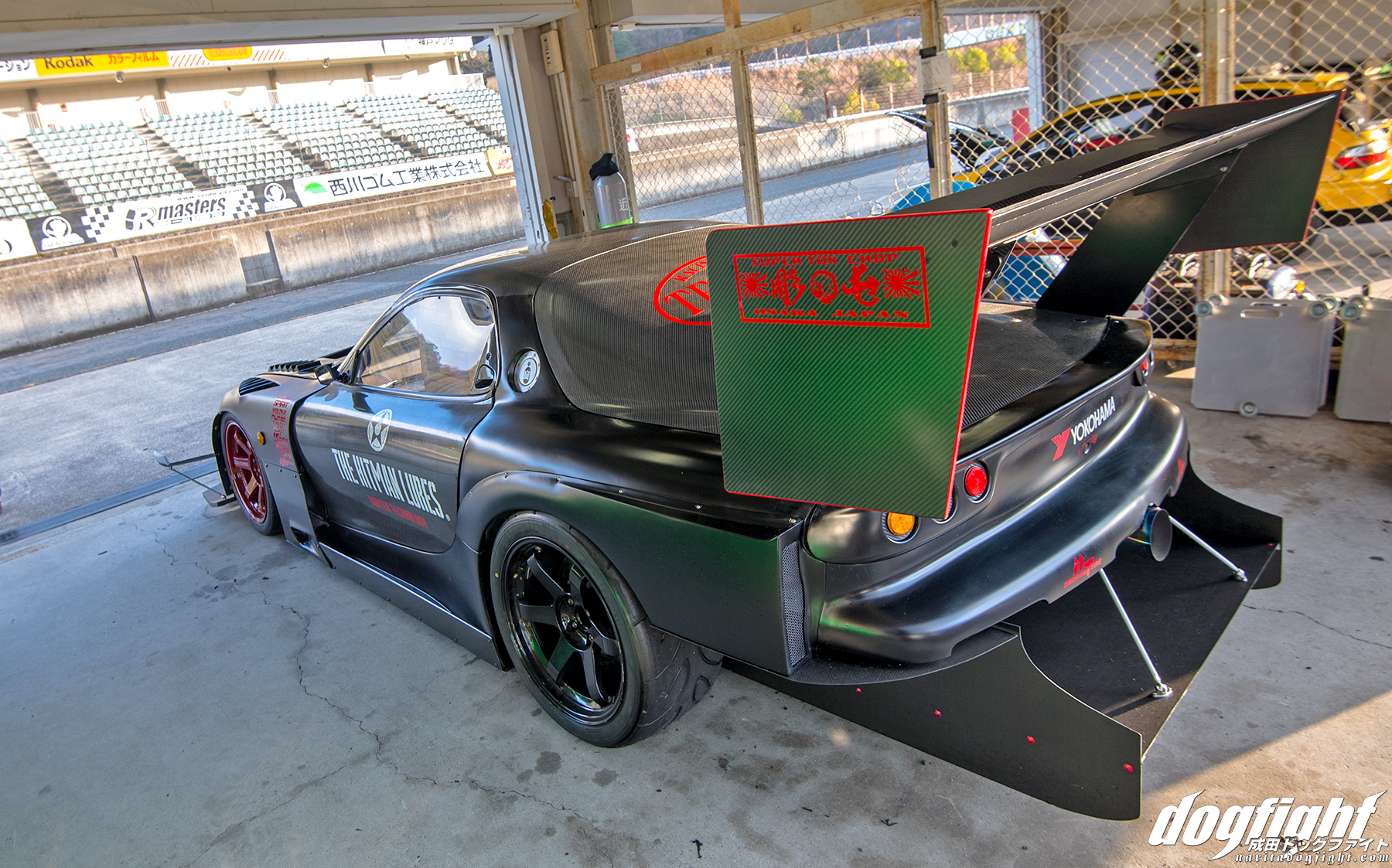 Nevertheless, it looked great out on track – and sounded even better. 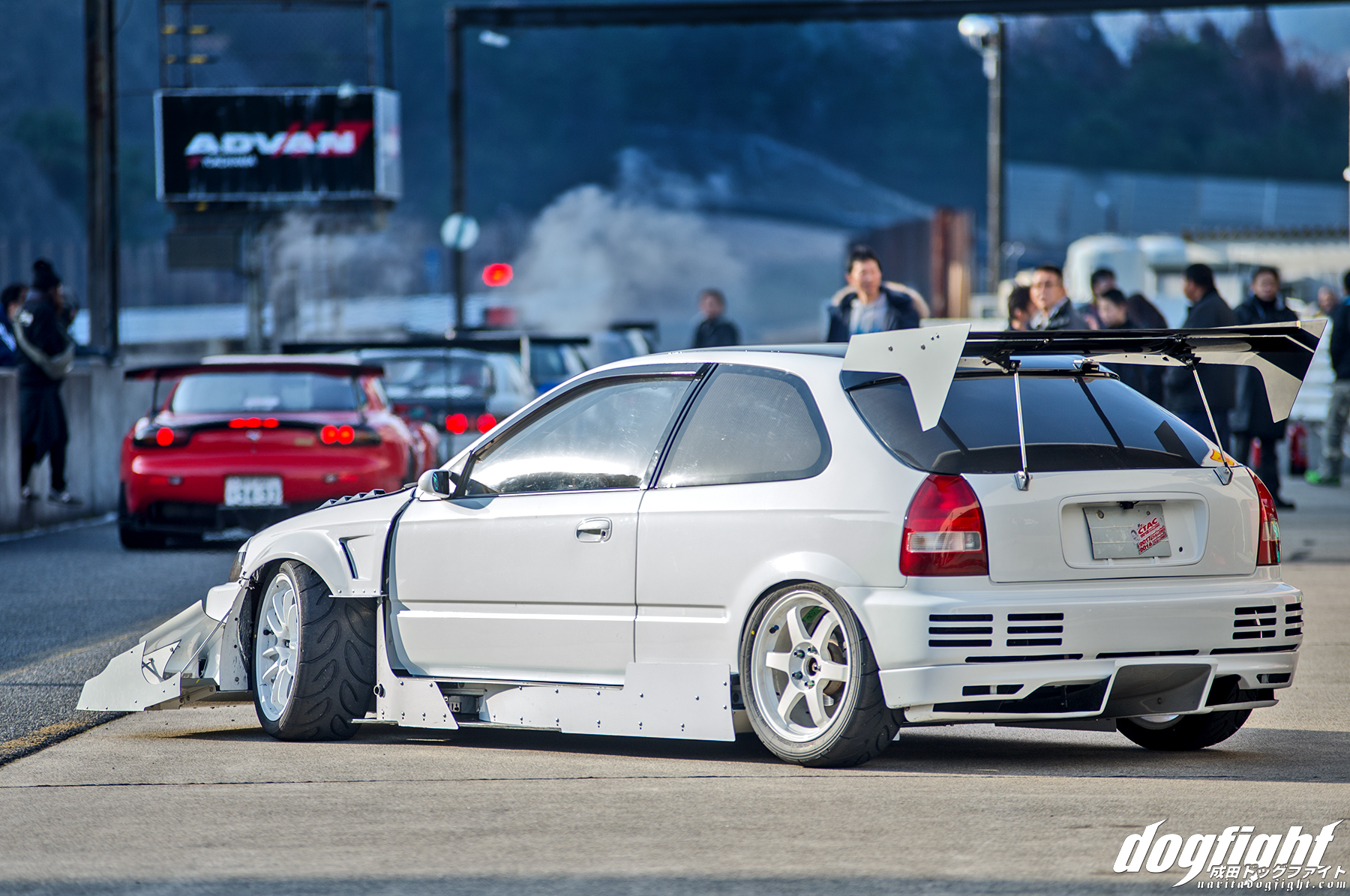 In third place came Yusuke in his Garage Work backed EK4.  This car has changed a lot in the past year!  I was pleasantly surprised to see an updated aero package for 2018.  The car runs a 56.748 at TC2000, and the team is shooting for a break into the 55’s and I think they way they’re going to achieve that (without adding power) is to further improve the cars aerodynamic grip.  An entirely new front splitter, side strakes and under panel assisted the car in getting a 1:19.744 around Central. 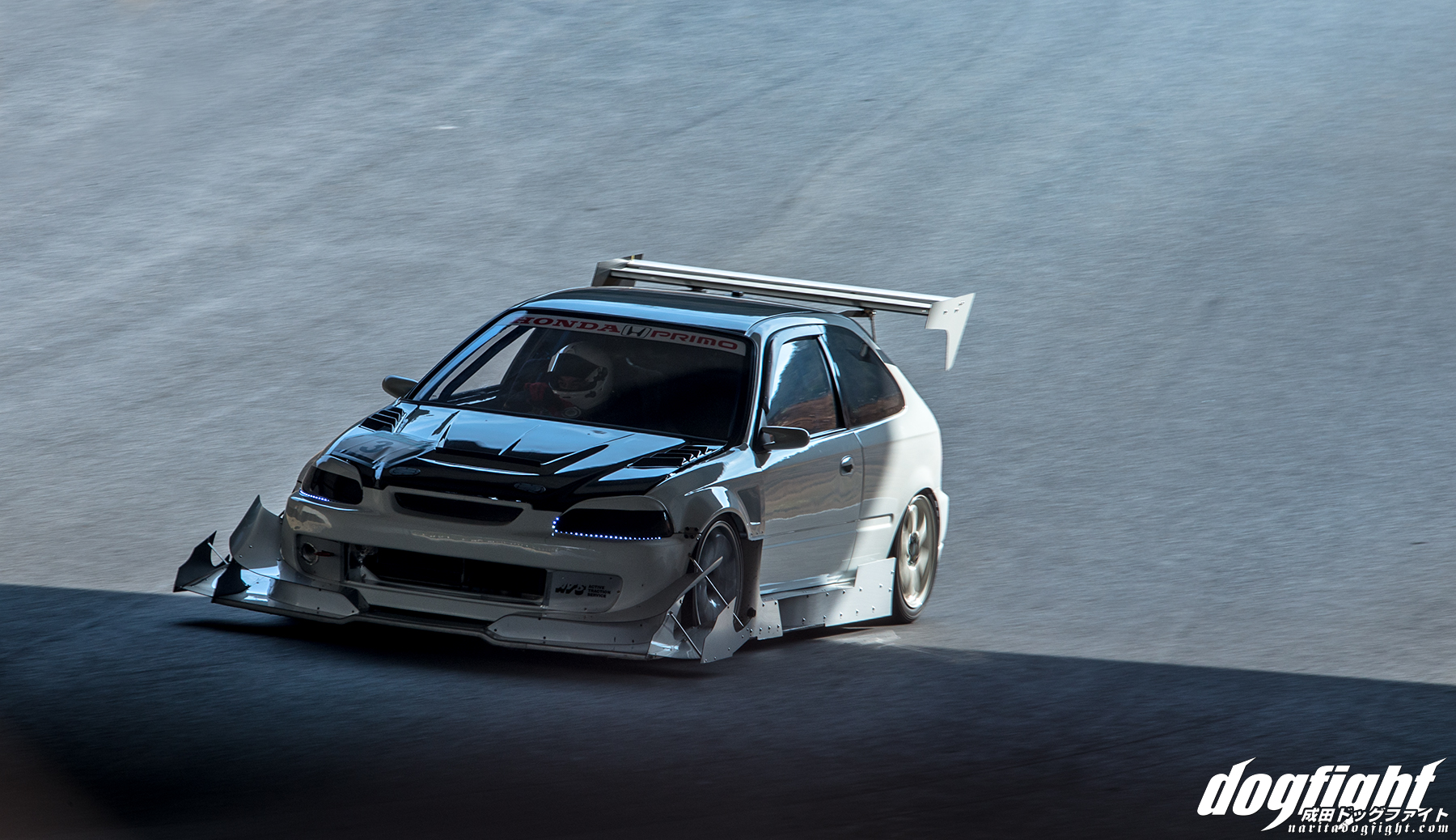 I’ve always been impressed with their driving style. 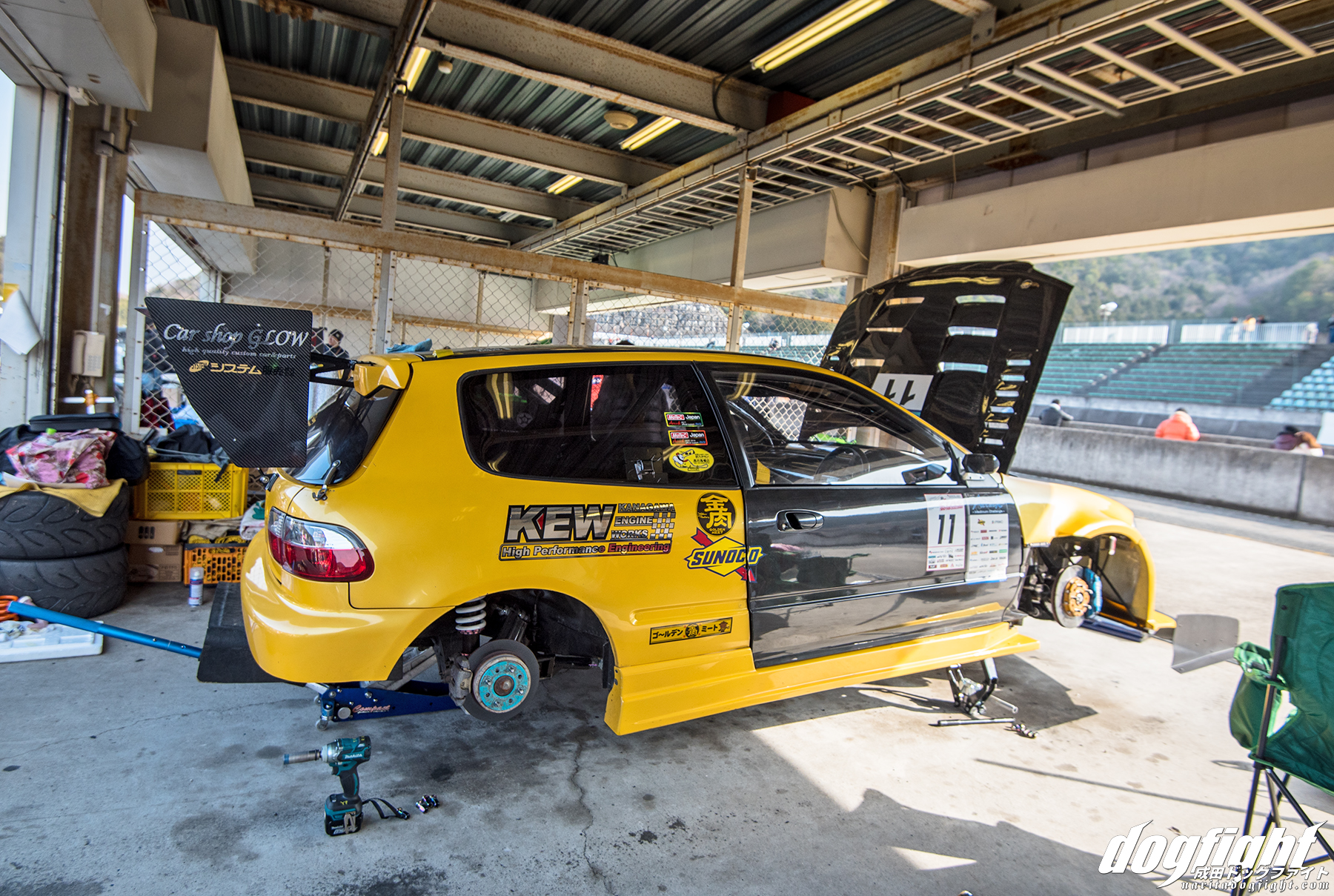 The difference between third and fourth in the NA class was drastically different than that of the Turbo class.  Ryo and his Yellow Factory EG6 suffered from clutch problems at the start of the day.  They were able to swap the broken part out and get out on track in the afternoon with enough time to garner a 1:21.759 – good enough for fourth, but still 3 seconds off podium pace.  Not a bad effort though! 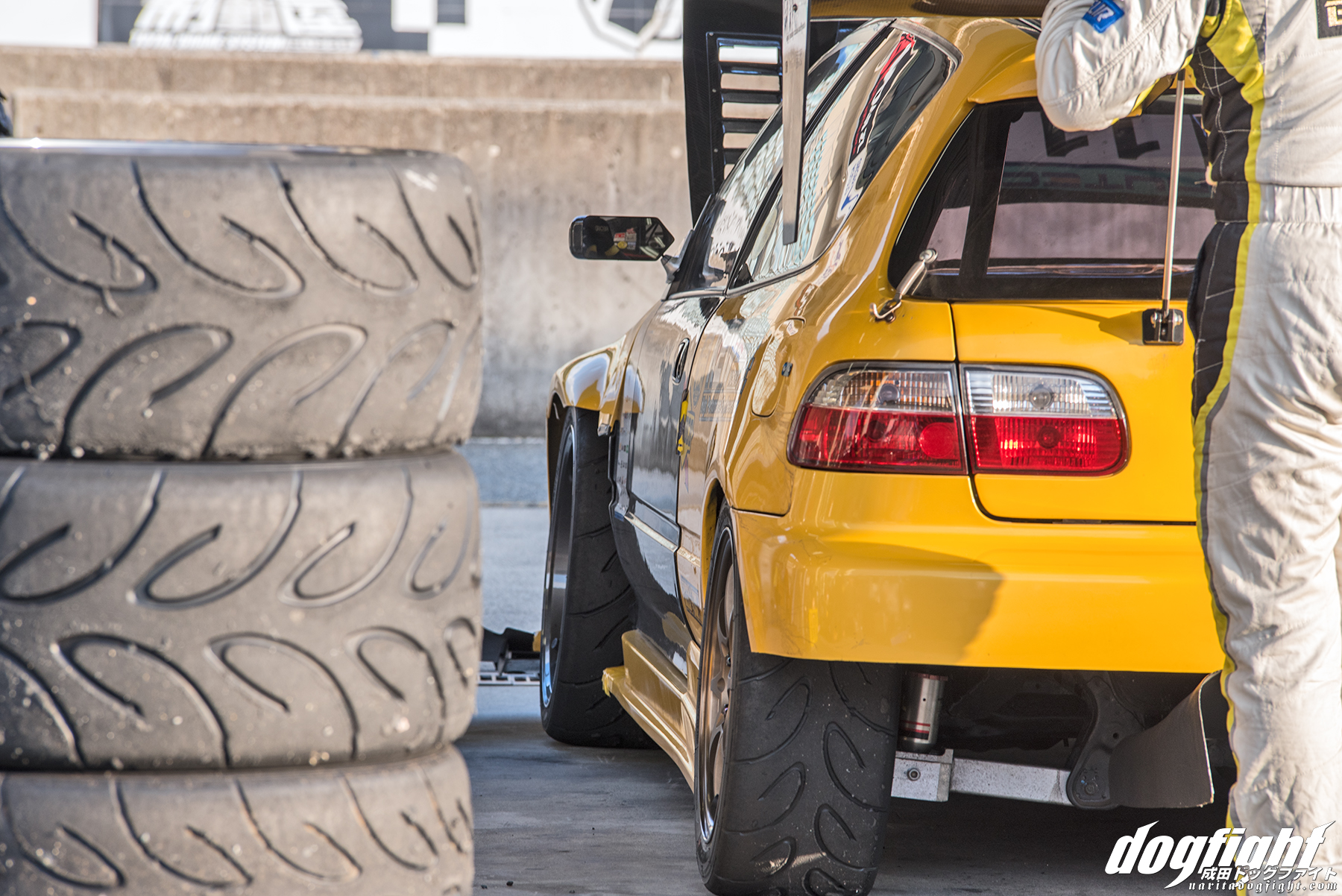 This car looks better and better every year as well.  Does my heart good to see their is still progressive development of older Honda chassis’s. 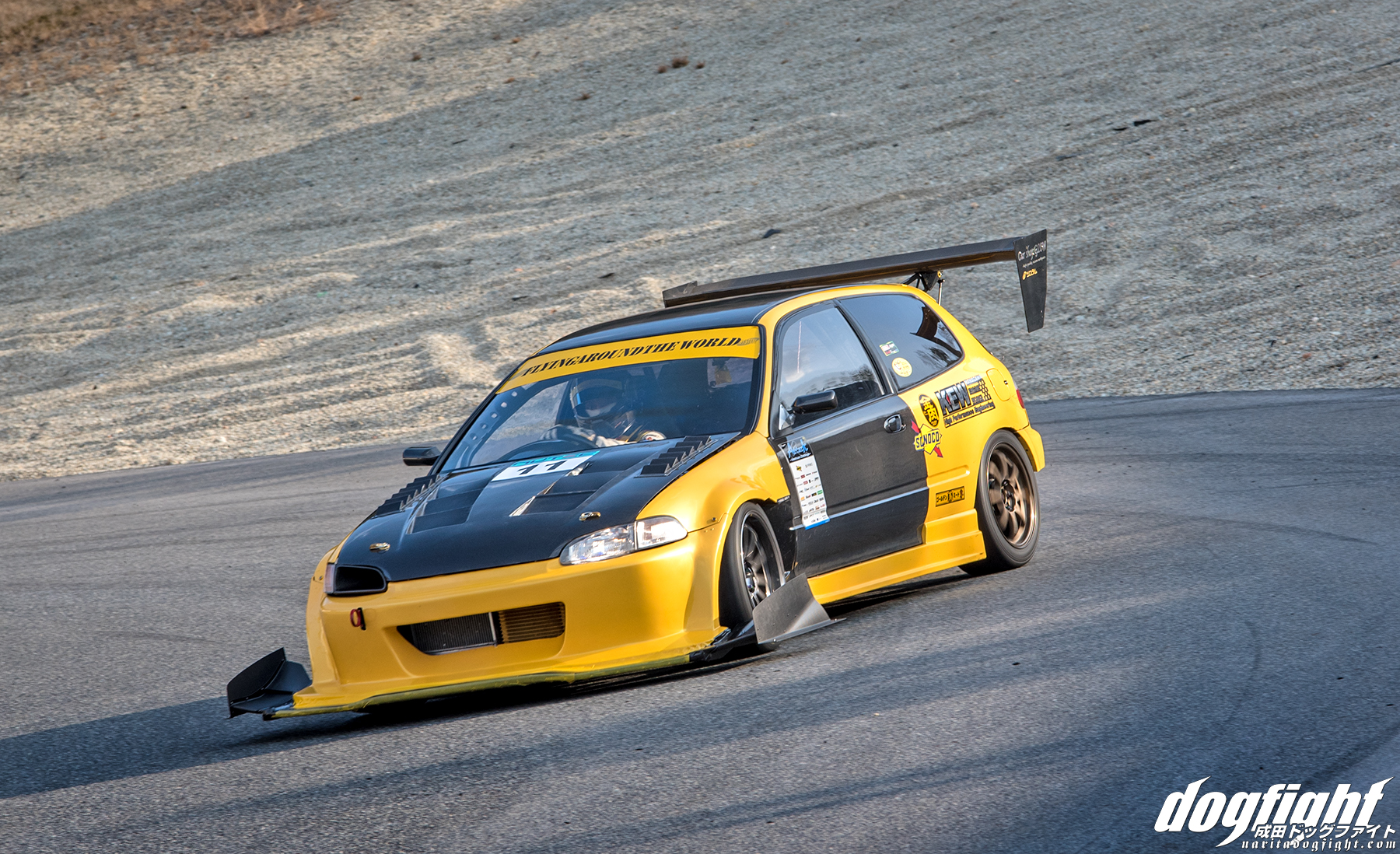 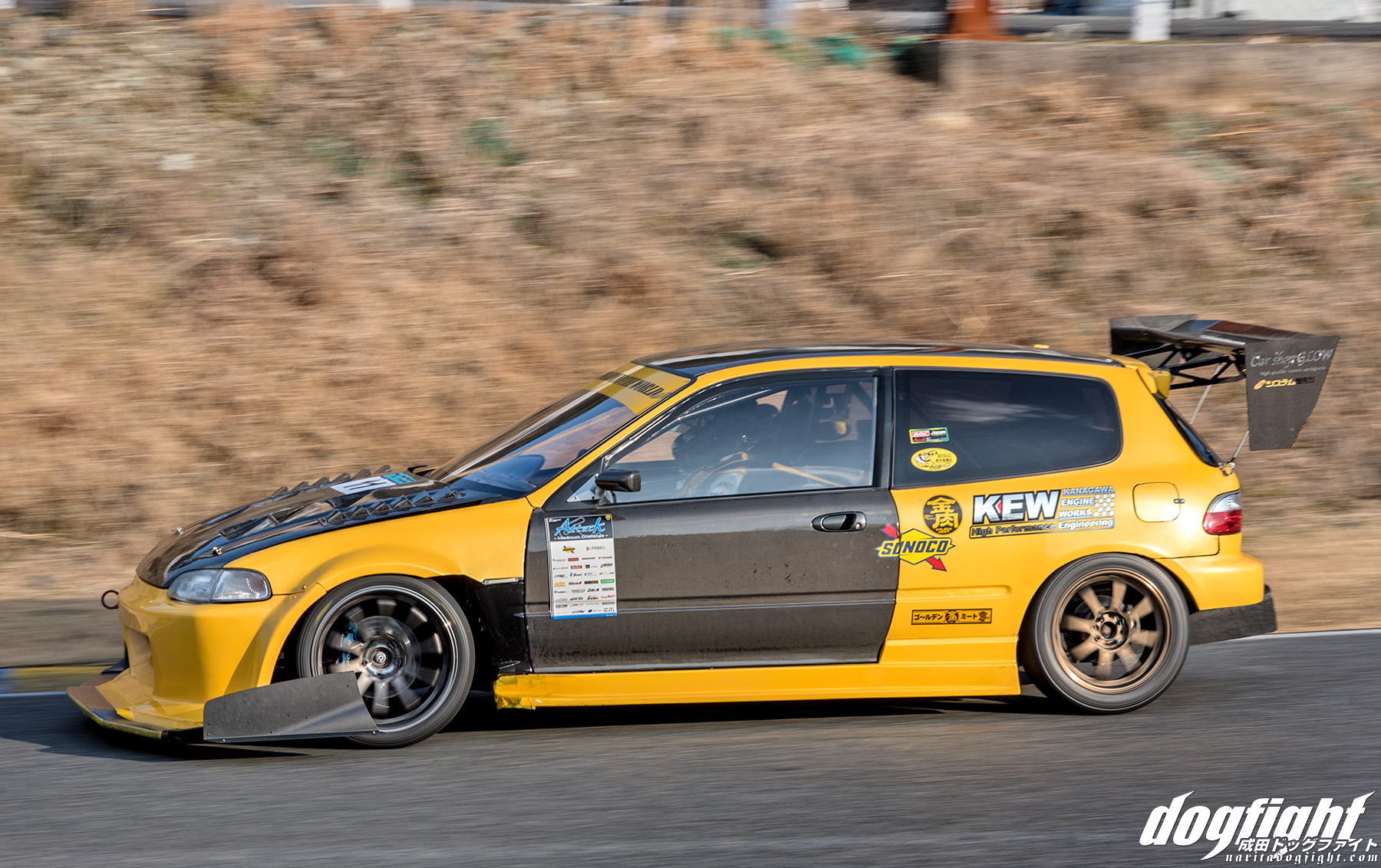 Those were the frontrunners of the event by far.  I’ll do my best to get some coverage of the other run groups up soon, as well as the off-pace cars in Vertex class.  This was actually a pretty large event, and I want to cover it in detail if I can.  Thanks for being patient!