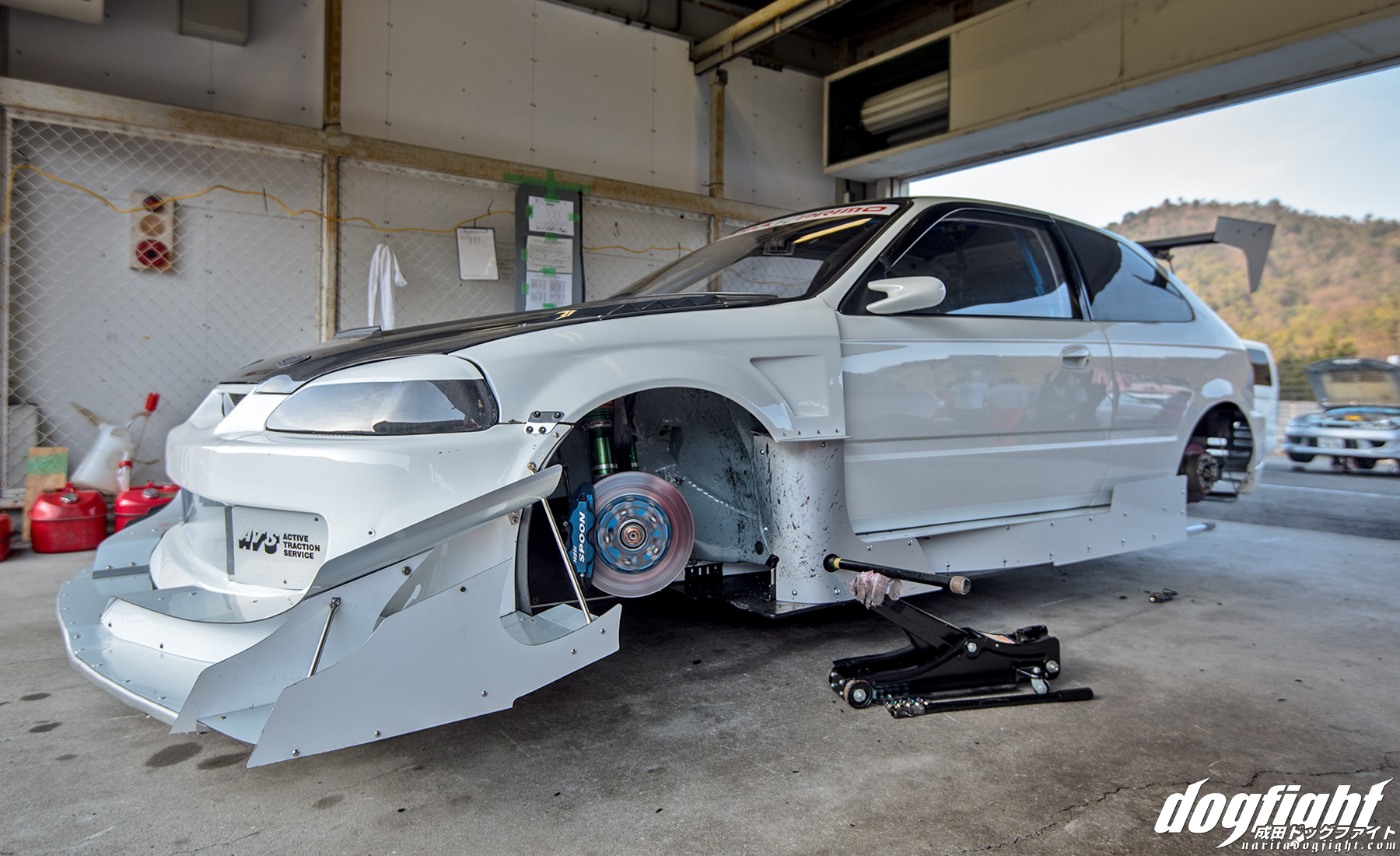 The Garage Work camp has been hard at work on several of their shop cars for the 2018 season.  Iwata has chosen to put his personal build aside in order to concentrate on the advancement of a few select customers; which is a somewhat noble, but necessary thing to do when you own your own tuning shop.  The dedication is paying off though, as all 3 of the cars they have competing have broken personal records.  One of them stands out among the rest, however, and it all started last year when he broke a very important record at Tsukuba.

Tokue has always been adamant that his car is not a Type-R.  In fact, he goes as far as putting his name down as ‘Rじゃないよ’ on event time sheets (translation “Not a Type-R!”).  He told me once that when he first bought his car, the Type-R was not yet available to him.  Despite him wanting one so bad, he had to settle for the EK4 and since getting into the sport, he’s vowed to make it faster than the EK9 he had once coveted so badly.  It’s his way of saying, he did it.  However, he didn’t just make his civic faster than a Type-R, he has made a dent so large in the sport of time attack that people will no longer look at Honda Civics as the dark-horse of Time Attack.

No longer are naturally aspirated, front wheel drive cars the underdogs of this sport – they have become the Frontrunners.

With the upcoming Attack Championship next week at Tsukuba, the big narrative for me to follow will be if Tokue will be able to retain his title as fastest N/A FF around TC2000. Last year, he ran an unprecedented 56.748 and next week he’ll be driving to shatter into the 55’s, making him and his EK4 among the fastest N/A cars around the course; not just FF, but in the entirety of the paddock.  It sort of puts things into perspective when you think about cars like the ASM S2000 having a goal of breaking into the 56’s (awhile back it ran a best of 57.398 naturally aspirated).  Tokue is already the second fastest in the N/A class, falling second only to Hiroyuki’s Full Stage built, 20B powered FD3S.  The one car that I’m even the slightest worried about would be Ton’s Aslan EG6.  Seeing how the duo performed a few weeks ago at Central had me thinking that it could be a possible point of contention for Yusuke.  With that being said, though, Ton is shooting for a 56 flat at TC2000, but has yet to drive out of the 57’s (57.1).  The K-powered EG has stepped up for this year, and the one disadvantage is that Tsukuba isn’t a local track for the Aslan pair.  It will be interesting to say the lest.

Before CTAC, when I first caught pictures online of the Garage Work boys loading up their cars onto flatbeds, I couldn’t help but get excited when I saw the changes to Tokue’s car, and even more excited when I was able to get a closer look at it during the actual event.  Let’s take a look at some of the updates. 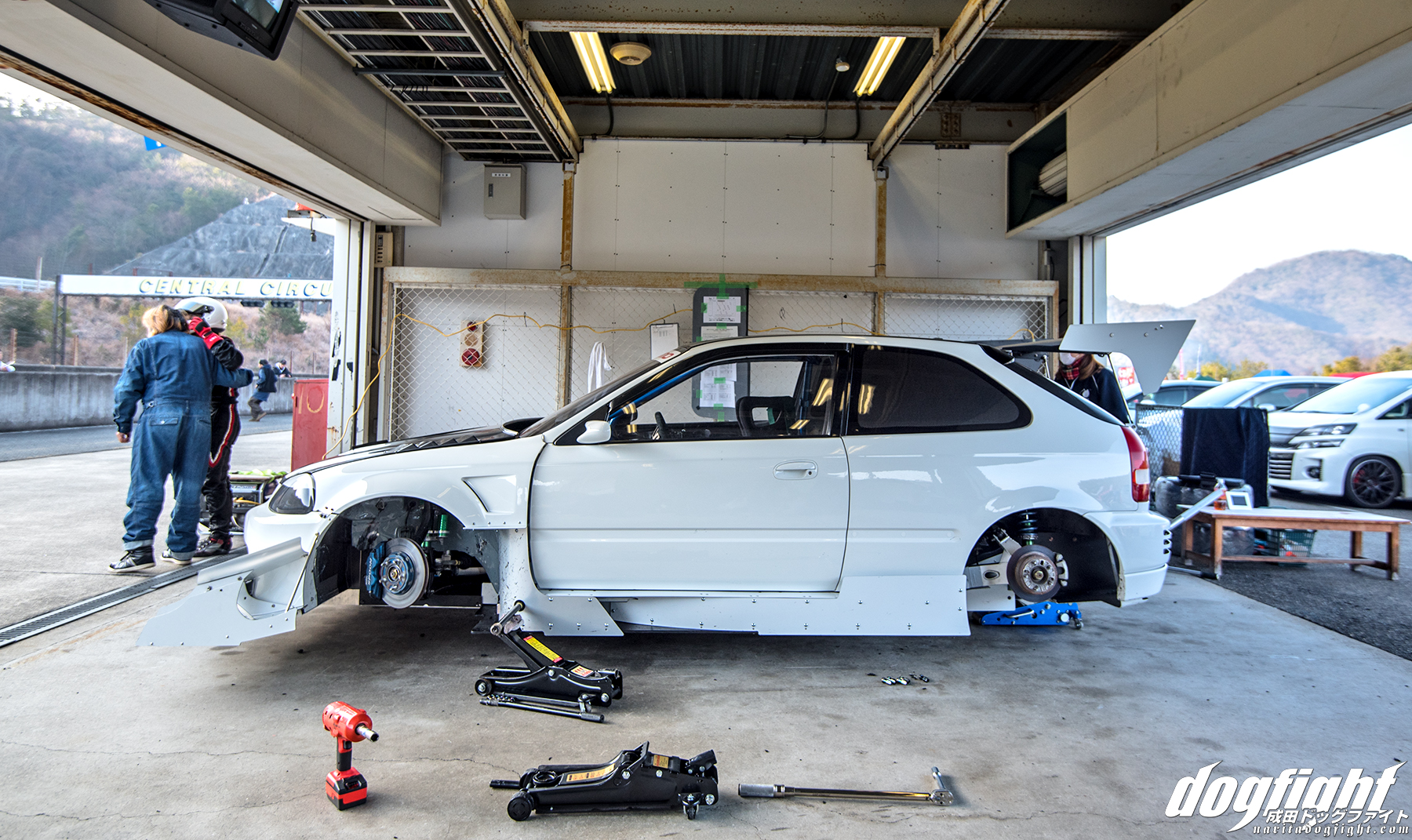 The bulk of the changes are in the aerodynamics of the hatchback; although the engine wasn’t immune to updating, the exterior was awarded the bulk of the revisions.  I remember a few years ago, when Iwata first started building this car, they had initially made the front splitter much too large to be optimal.  Fast forward to today, and it’s as if they have refit that same splitter but with a much better design to it. 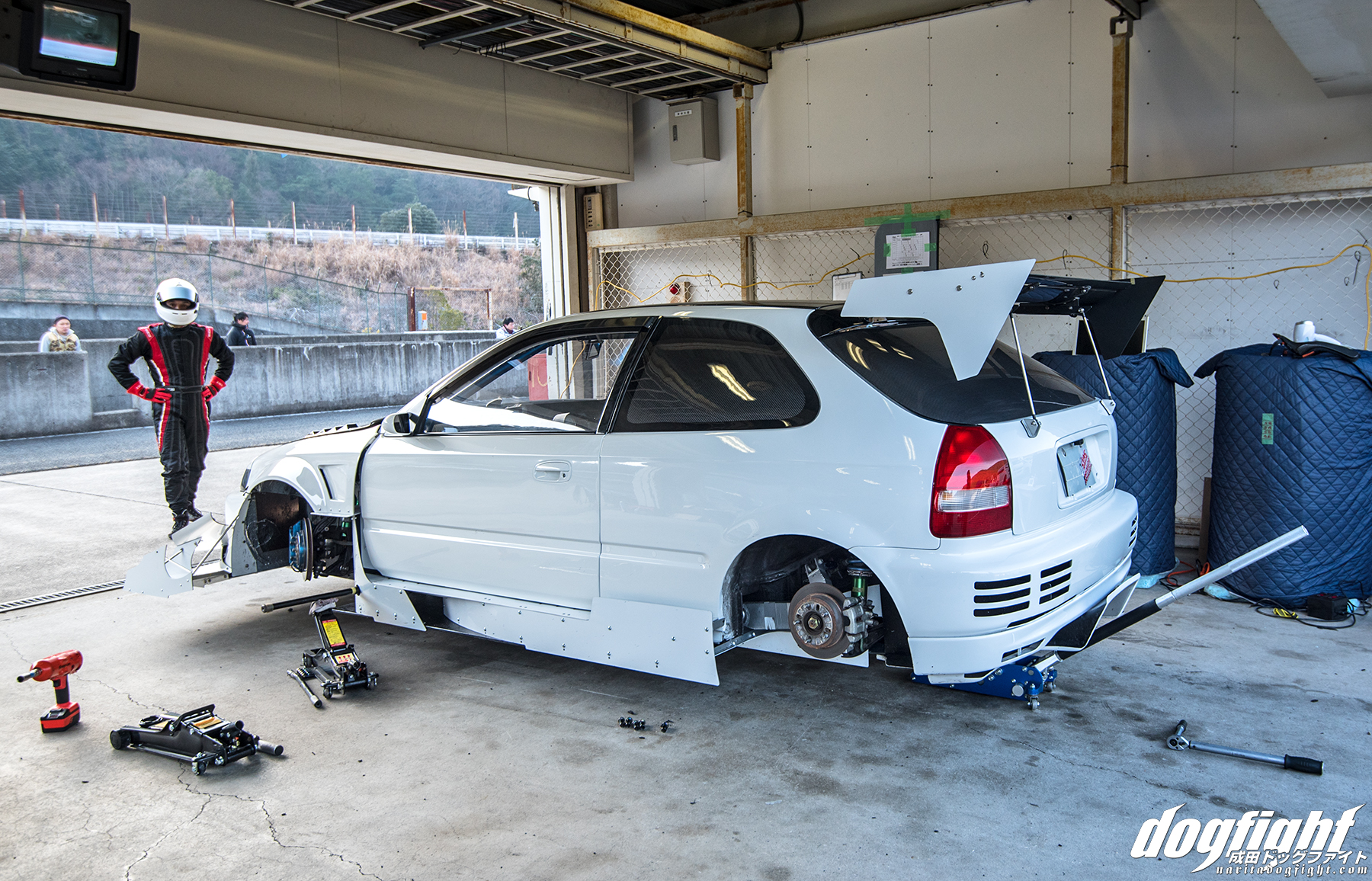 The side skirts were made to be much more aero-efficient, and tied into the full undertray of the car.  The increase in height lends itself to more channeling for air to be directed to the appropriate areas. 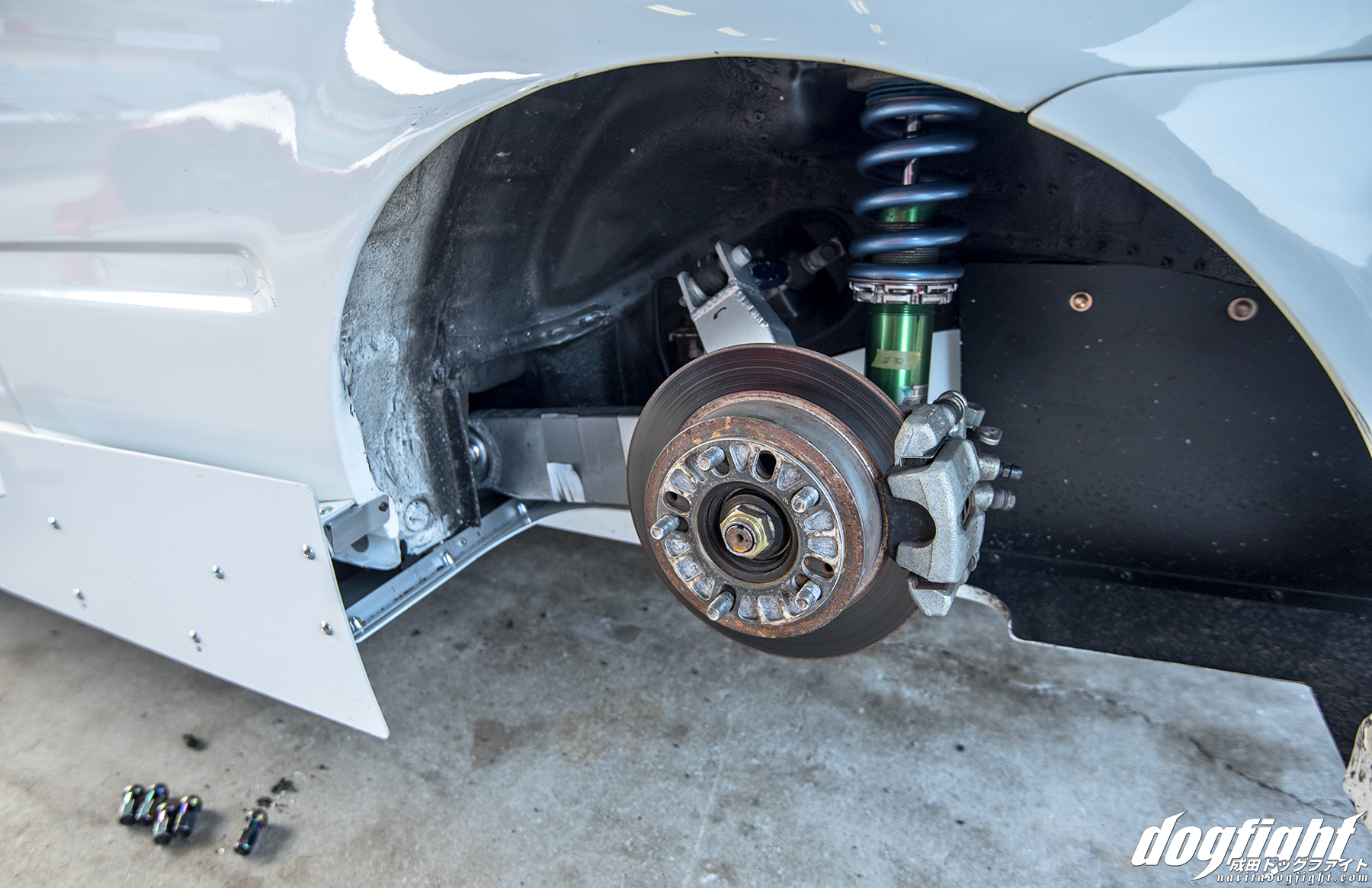 Rear suspension remains the same.  No stabilizer bars for these guys, as they take care of all their suspension tuning via varying spring rates and shock dampening.  I’ve mentioned it before, but they work very closely with Tein and have developed their own Work SPL, external reservoir coilover based off of the RS, that is proprietary to the shop. 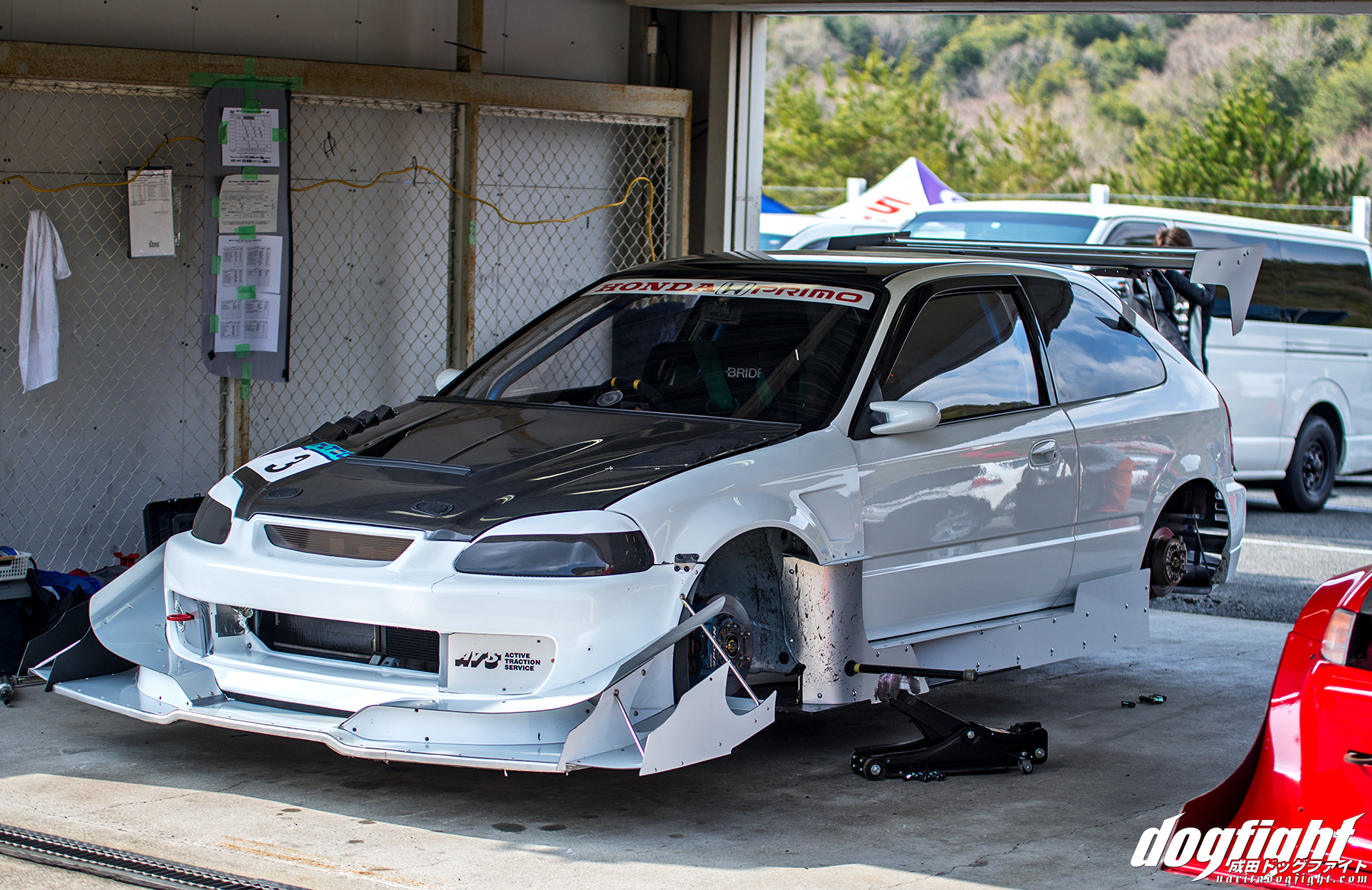 This gives you an idea of how 3-dimensional their aero has become over the years.  Gone are the days of 90-degree cut alumilite. 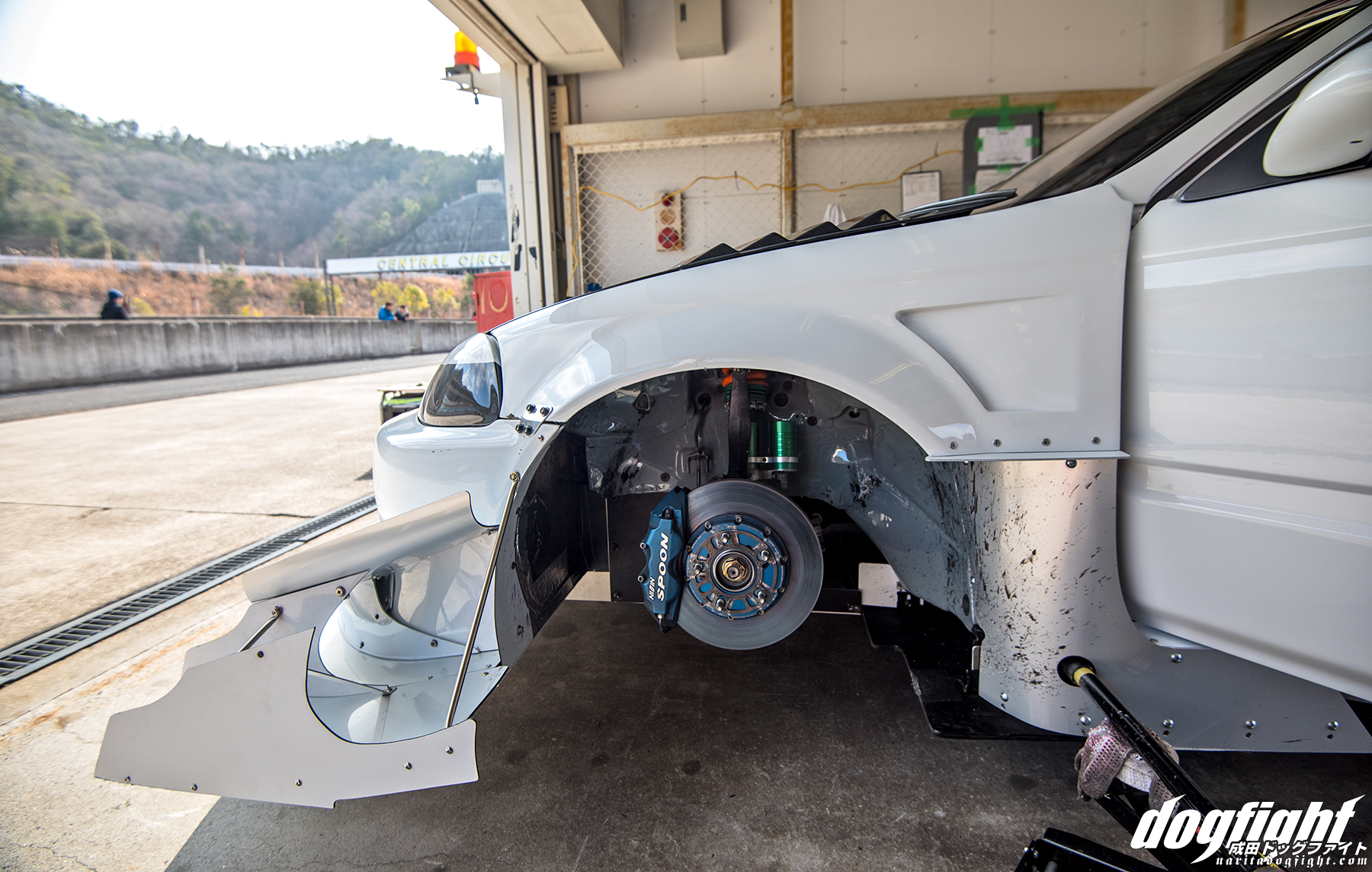 Tubbed front fenders accommodate the 265/35/18 tires that occupy the space. 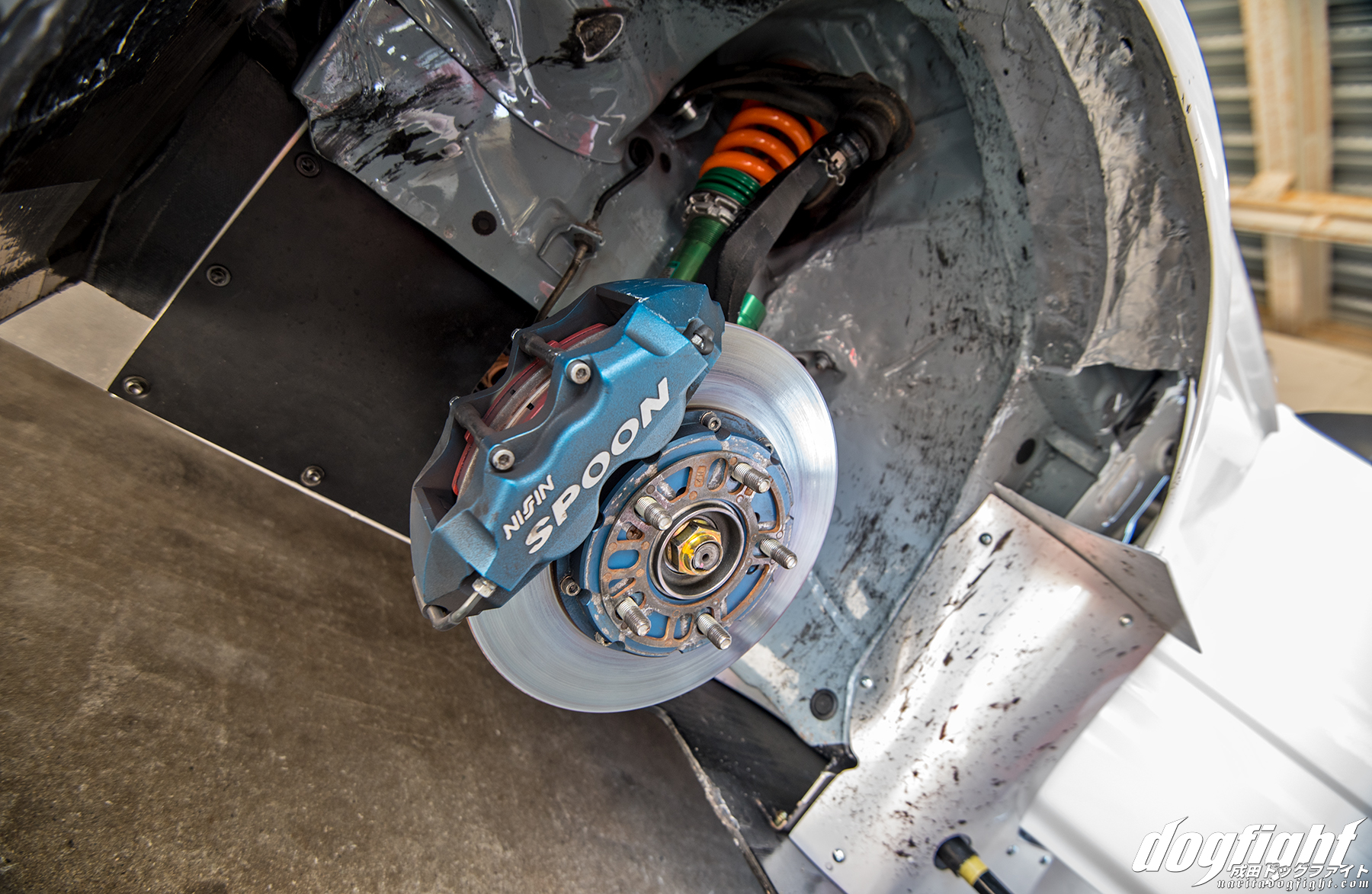 No extreme brake setup; simple is best.  A Spoon monoblock caliper is utilized to assist in braking, as well as reduce weight. 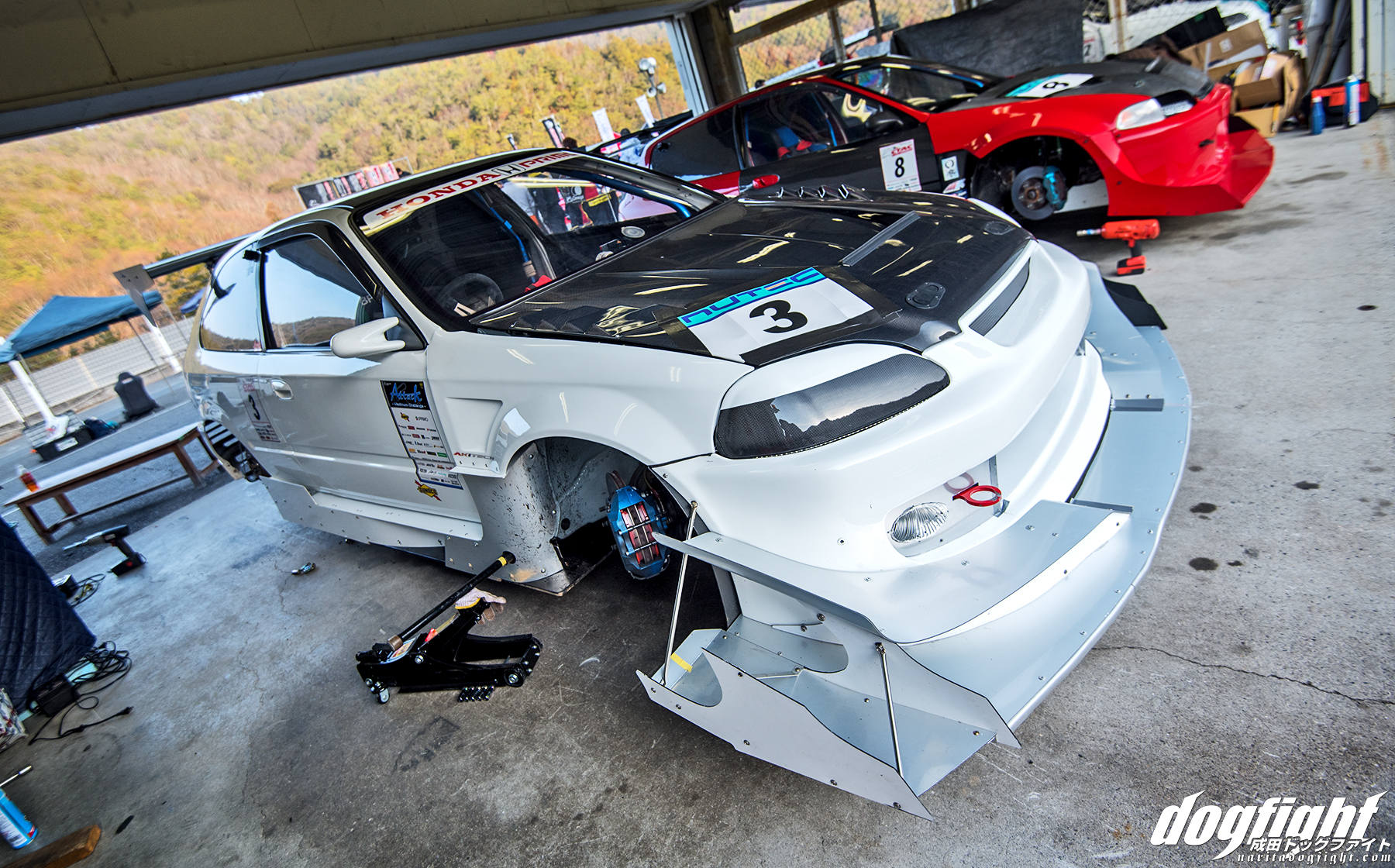 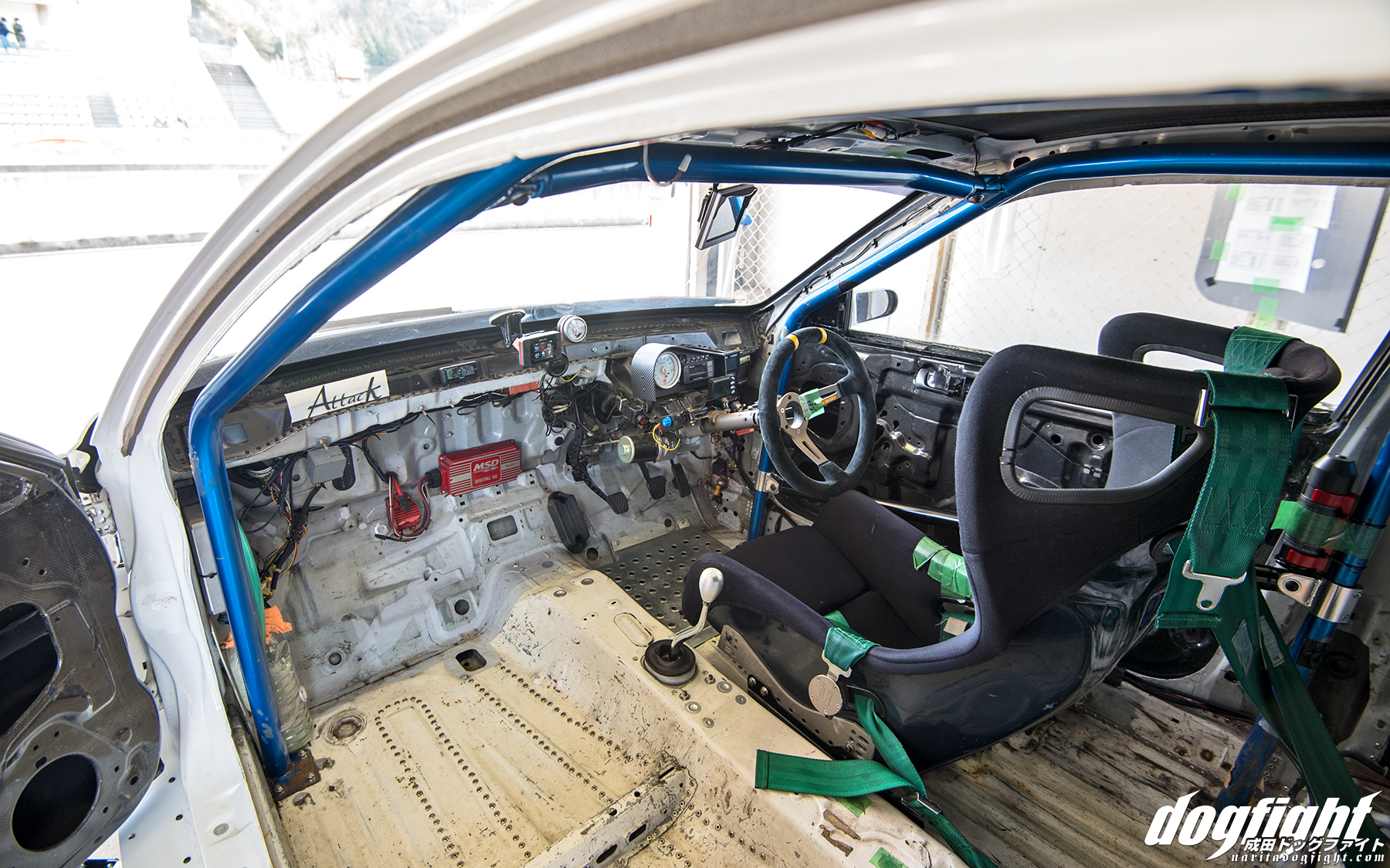 The interior leaves nothing to the imagination – only the necessities remain.  The entire chassis has been riveted to increase stiffness and reduce weight where applicable. 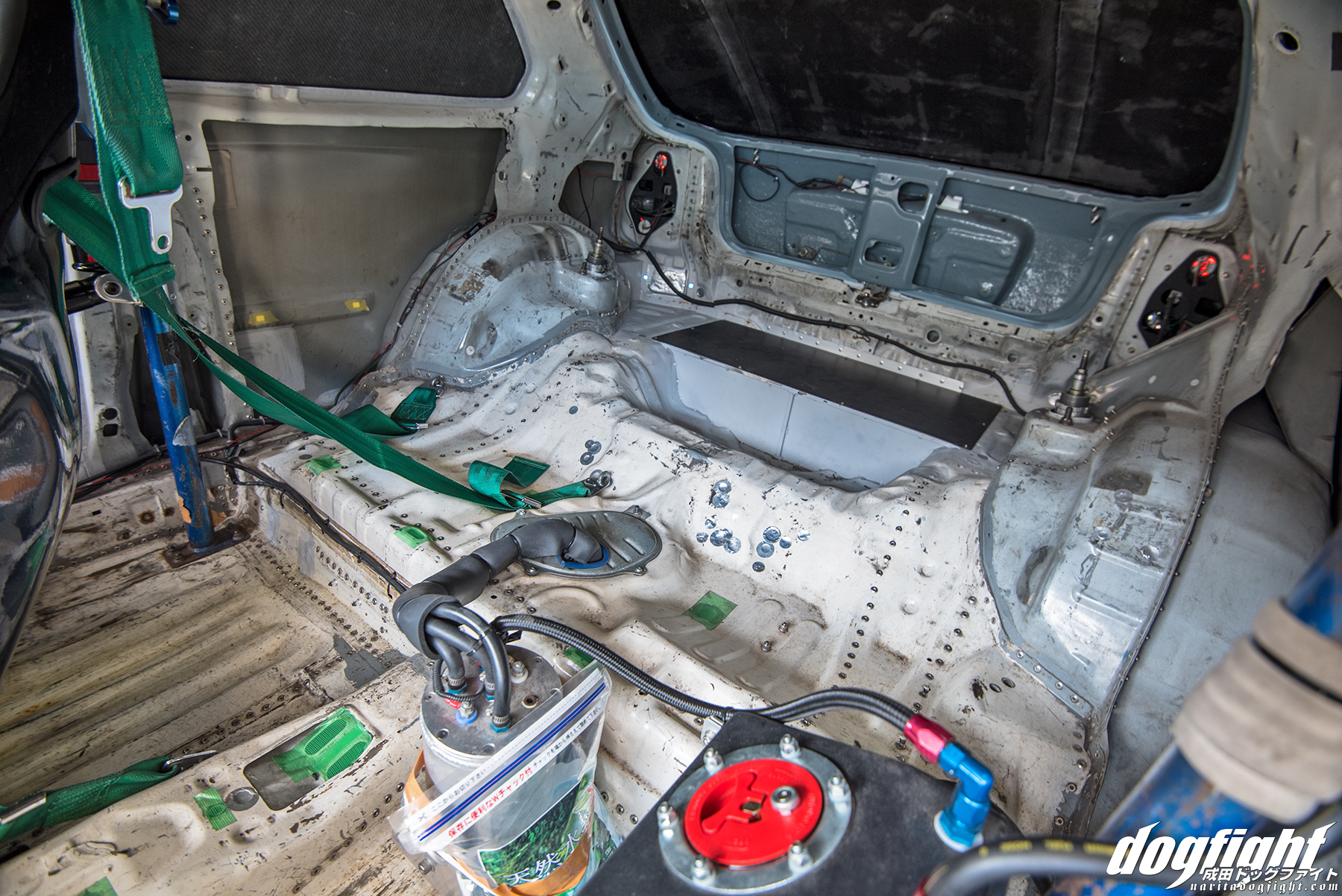 The entire car is focused around weight reduction.  It is the mindset of Garage Work that less is more in this regard. 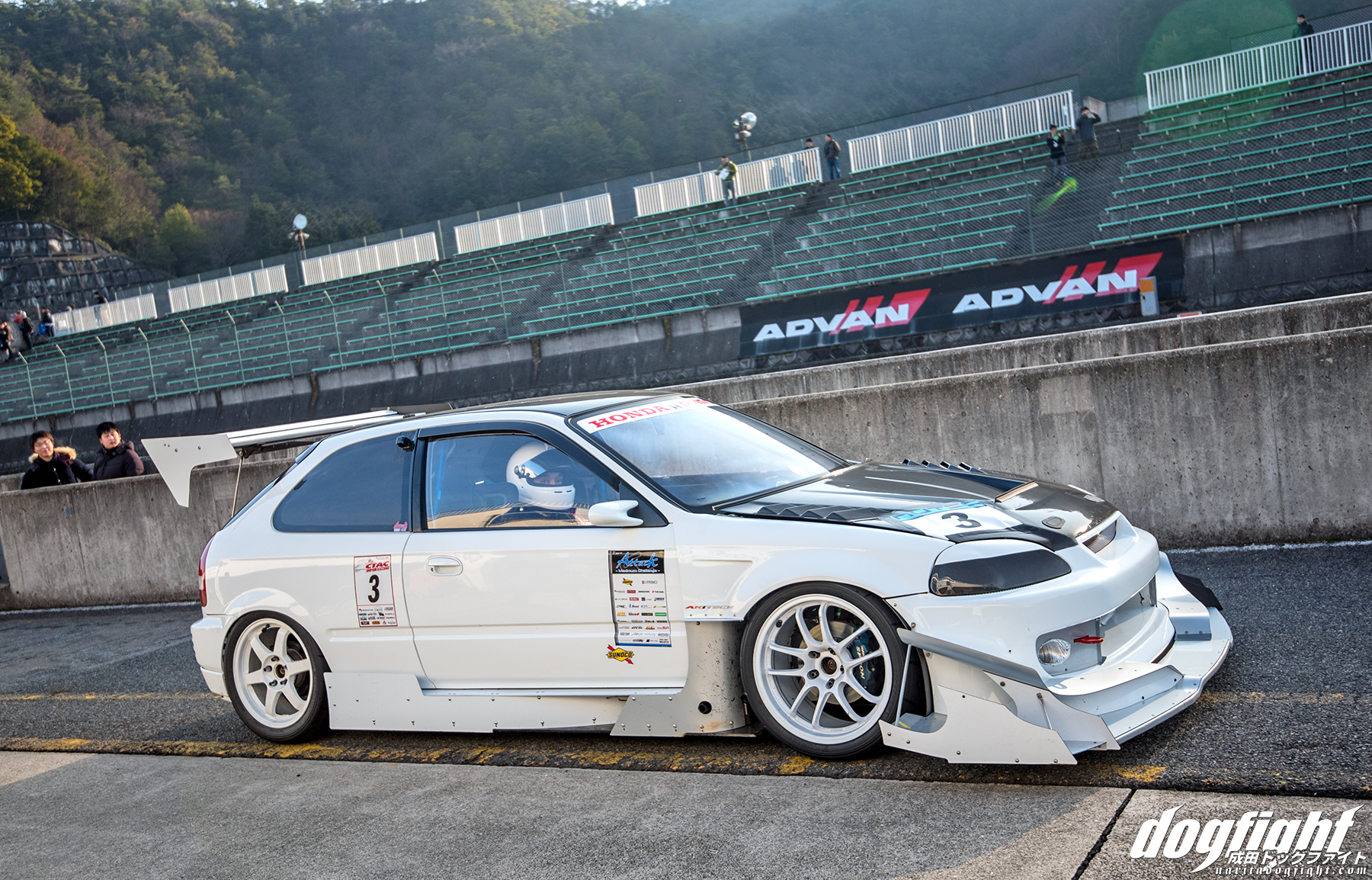 Heading out for the first morning session. 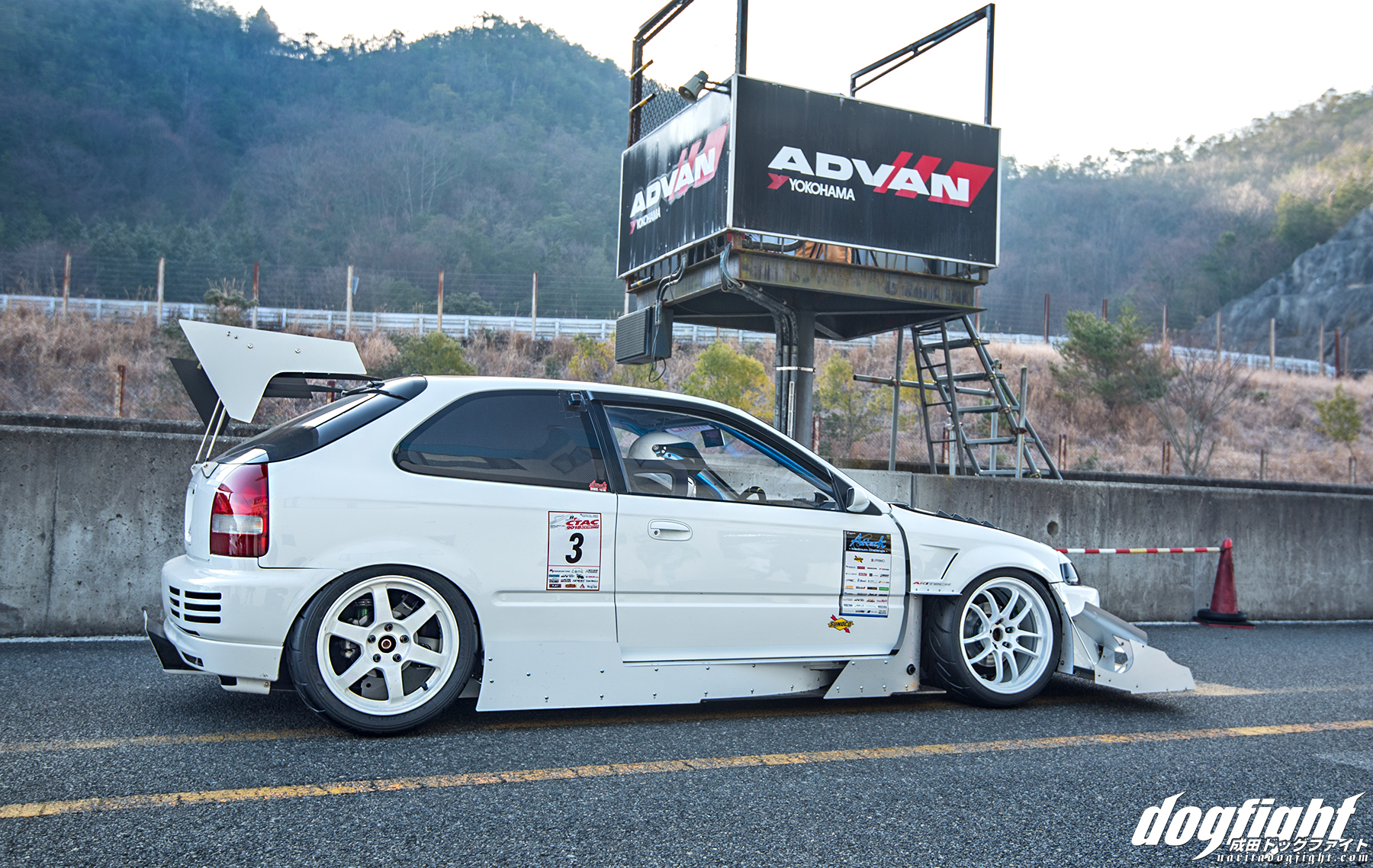 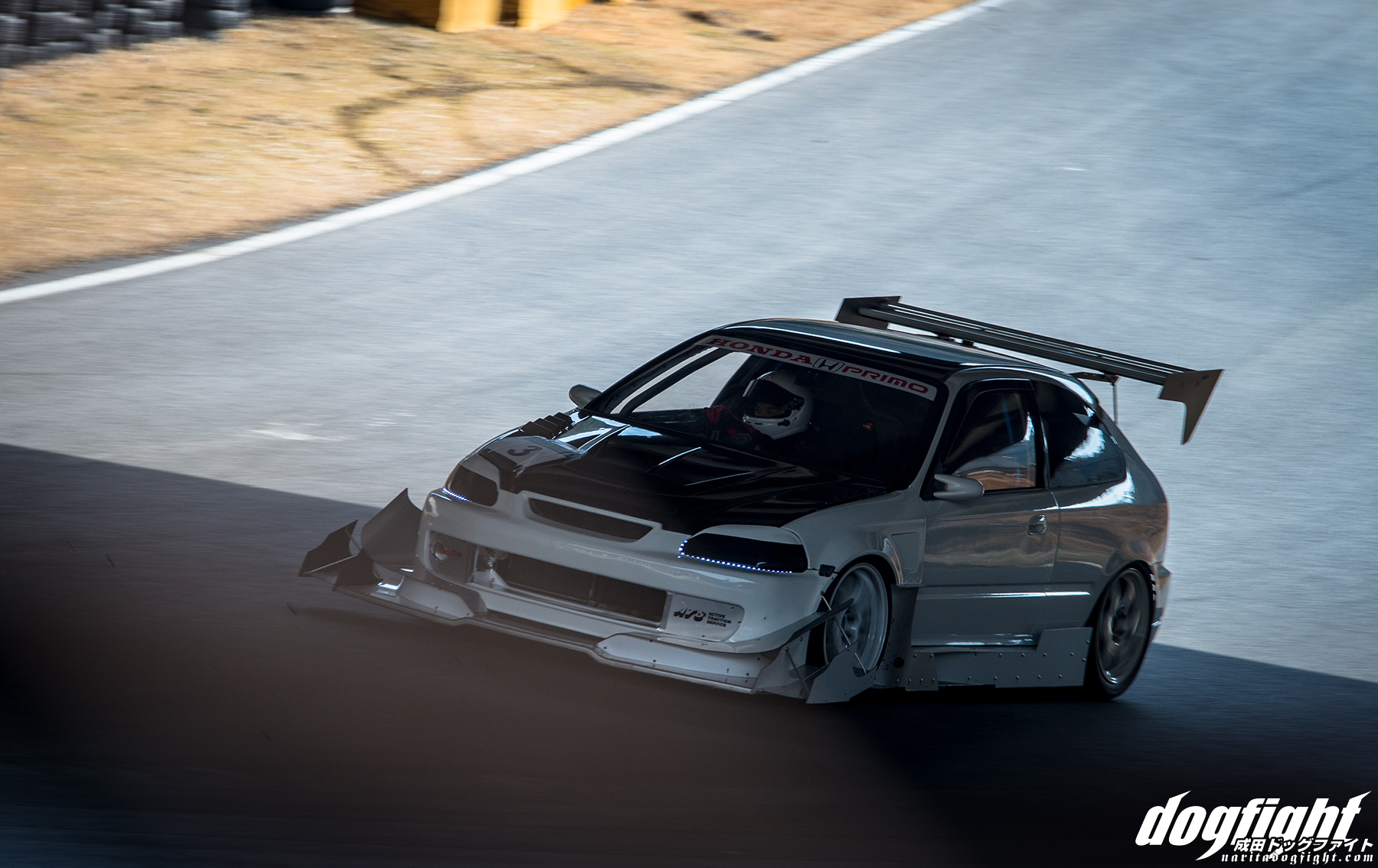 Tokue was able to grab a 1:19.744 around Central Circuit – which was just about a full second off pace from Ton.  Taken at face value that’s not the best result, but compare it to the 2017 event and the picture is painted a bit differently. 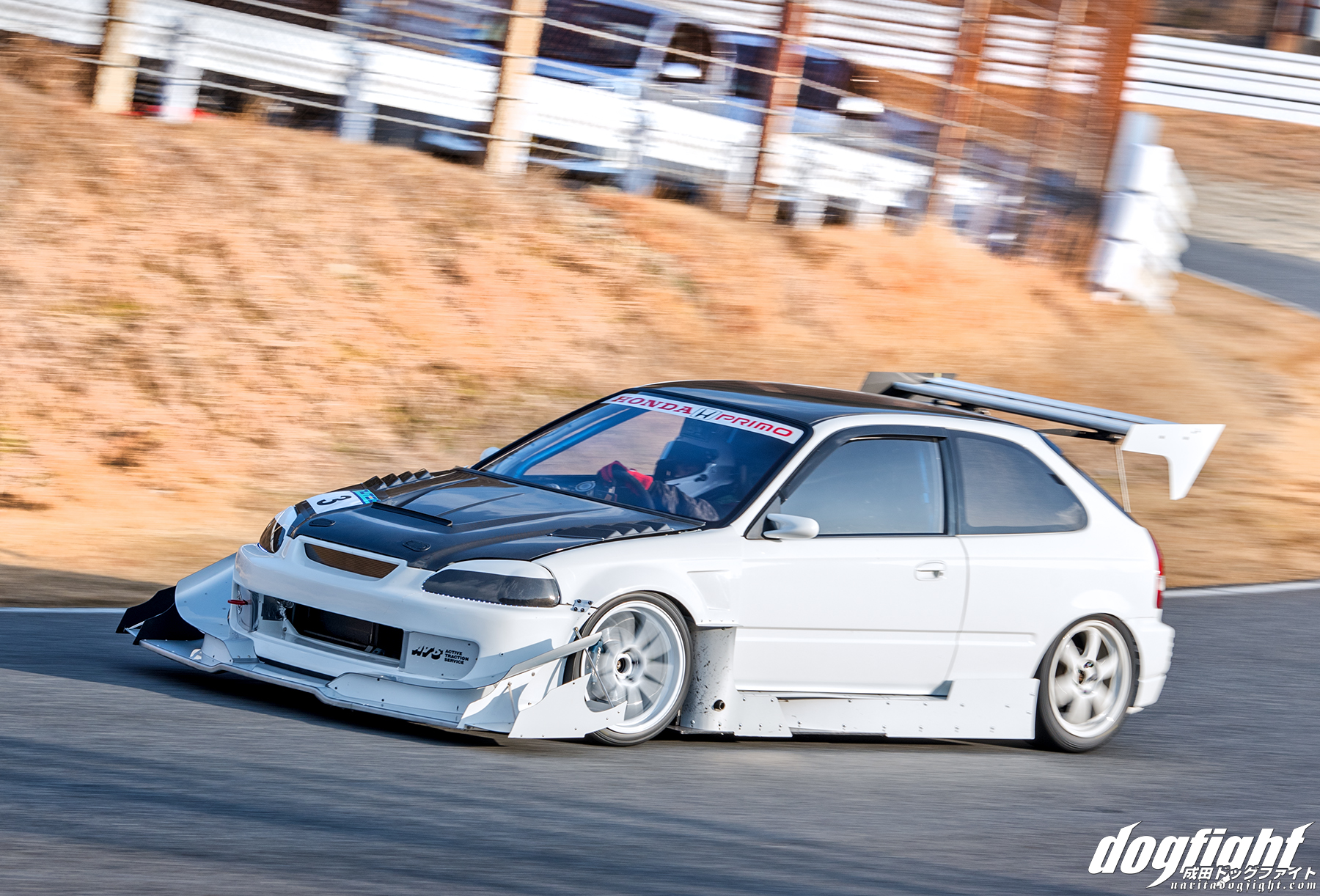 That gives me hope for the team to hit their goal at Tsukuba on the 24th, and for him to retain his title. 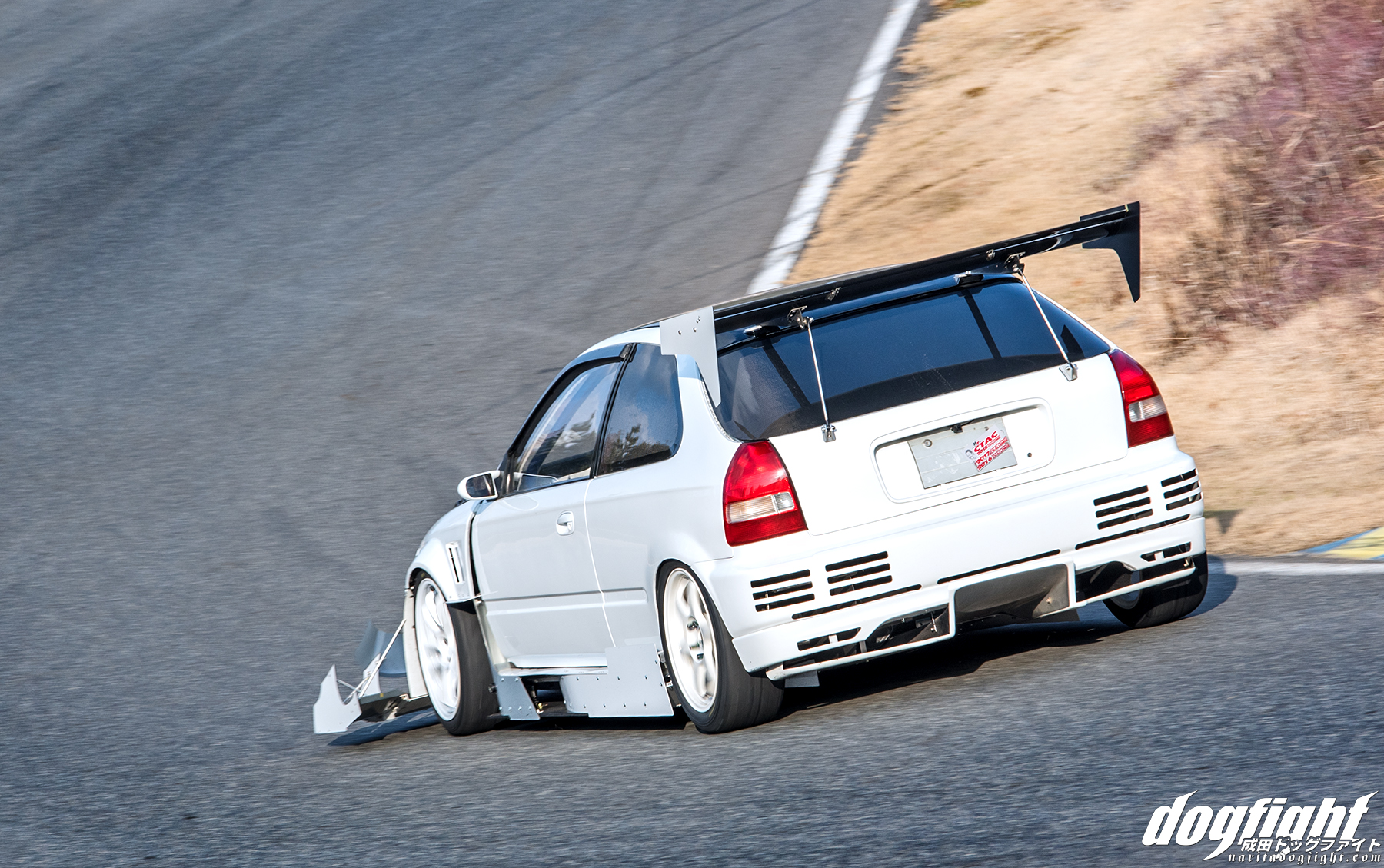 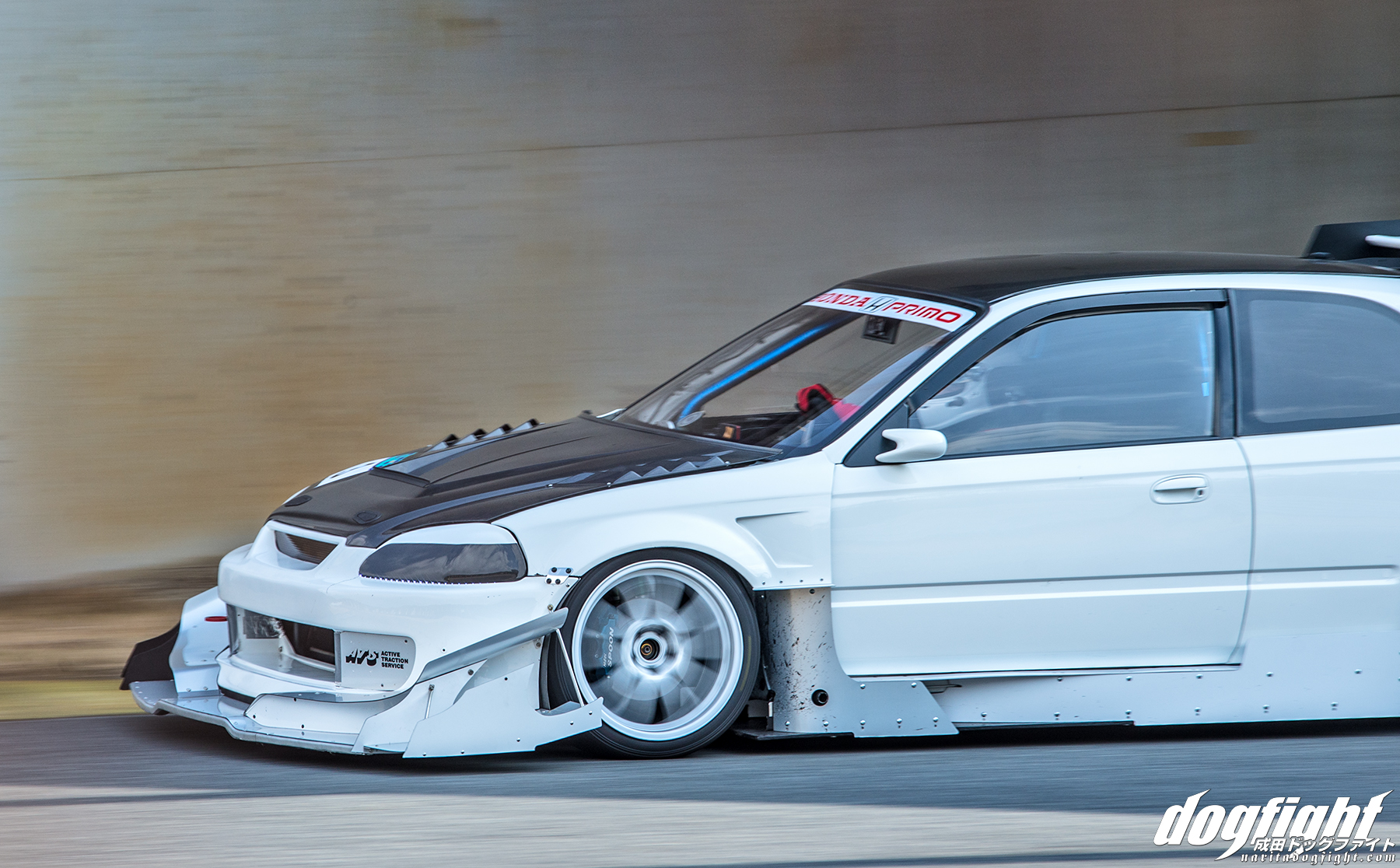 I mean, even if he doesn’t meet his goal, he still has one of the best looking cars in the paddock… 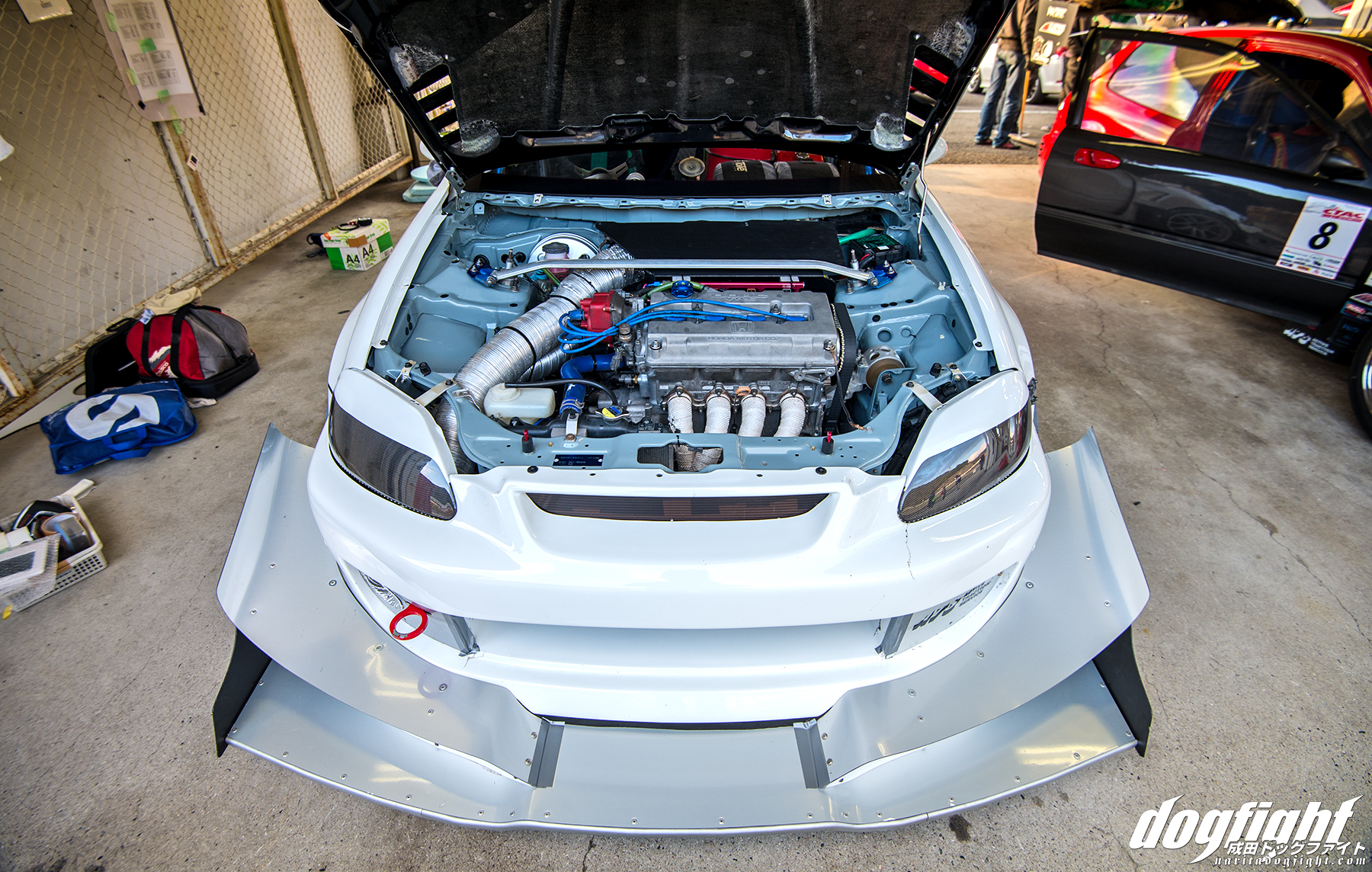 The B20 that powers the EK is a workhorse.  Producing just about 275 horsepower, the engine was just given a full overhaul in order to ensure reliability for the 2018 season.  TODA internals, and TODA ITB’s make sure there is power throughout the entire range. 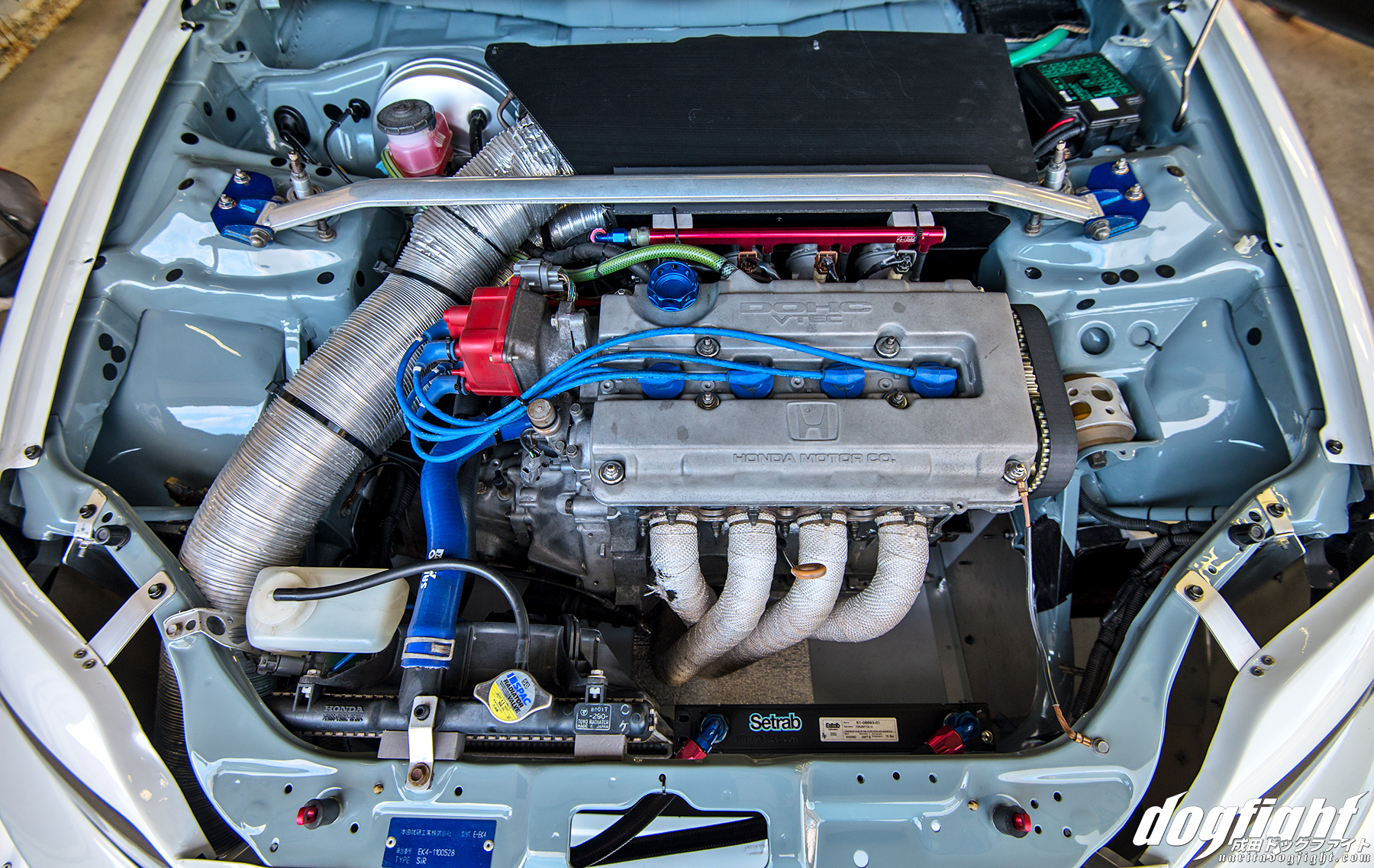 Iwata and the guys at Garage Work have yet to give in to the ease of power provided by the K-series.  Iwata told himself years ago that he would not even consider the newer engine until he could break into the 55’s with the B-series.  My man! 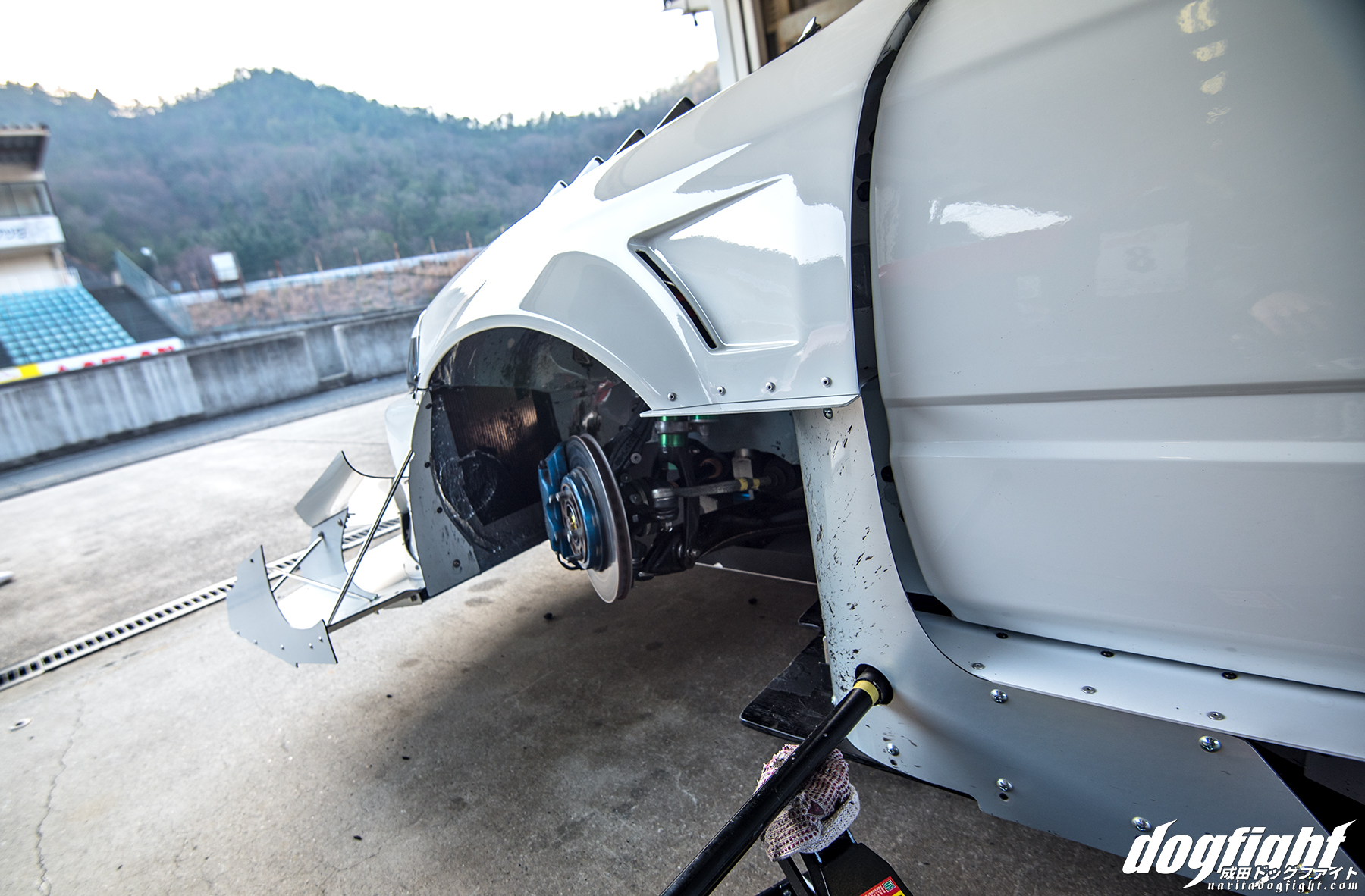 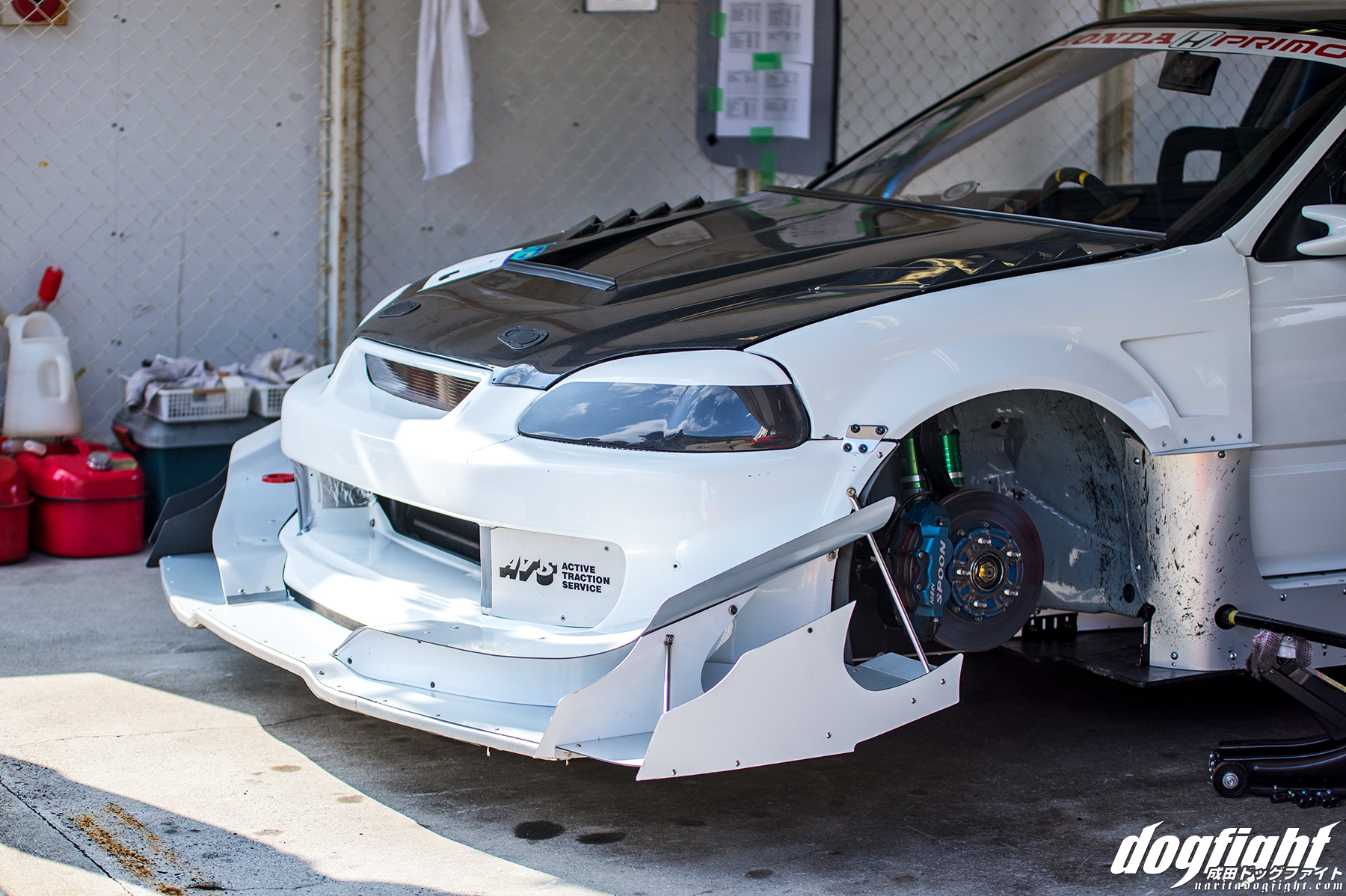 I will always admire the spirit of minimalism that these cars possess.  It’s something I strive to achieve in my personal life as well – as silly as that may sound.  It takes great skill to pilot something like this so quickly.  To be so successful with so little, it really is something to be proud of – as I’m sure Yusuke is. 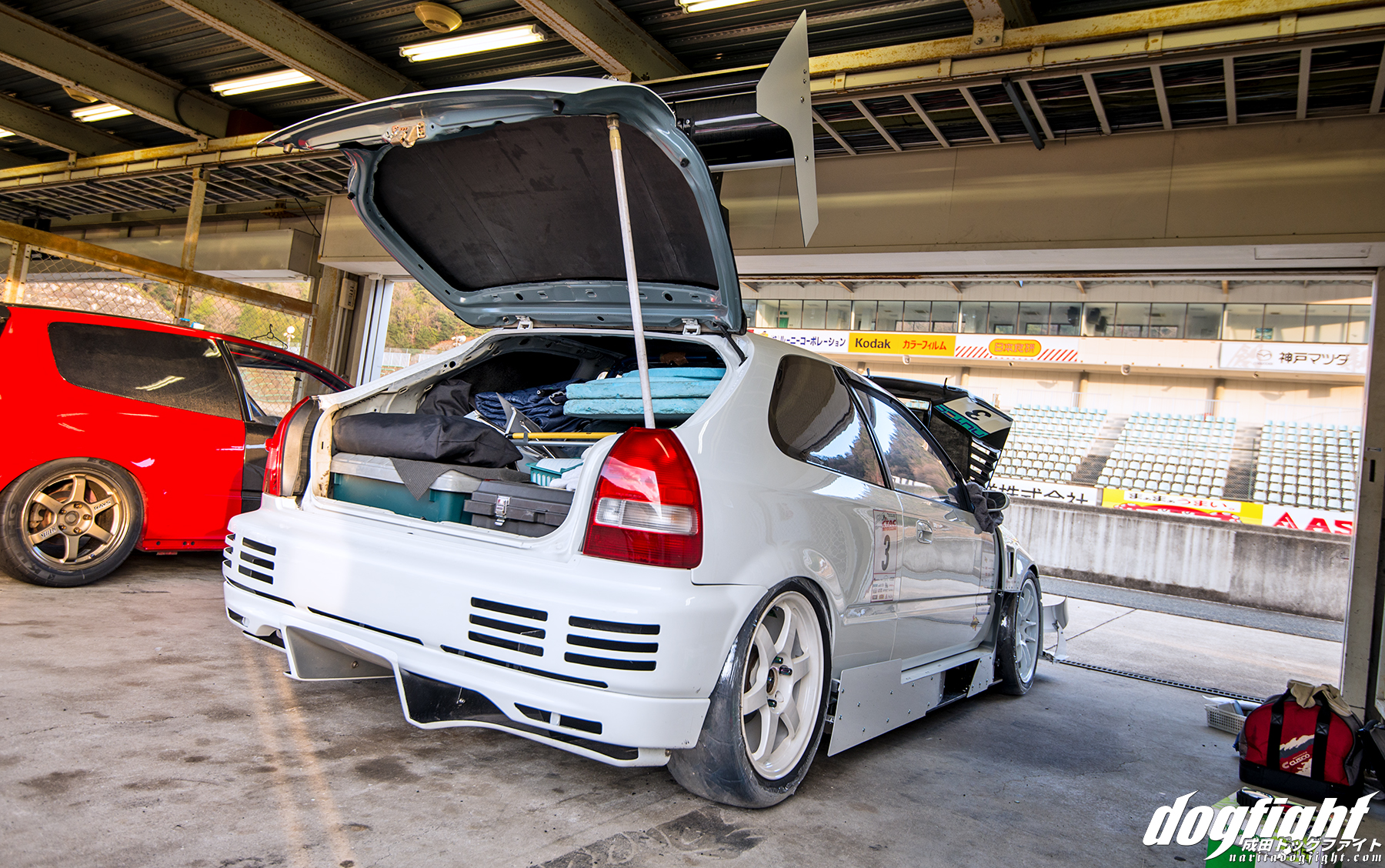 Hope you enjoy this spotlight, as you’ll be seeing more of this car on our Instagram feed next week – live from Tsukuba!