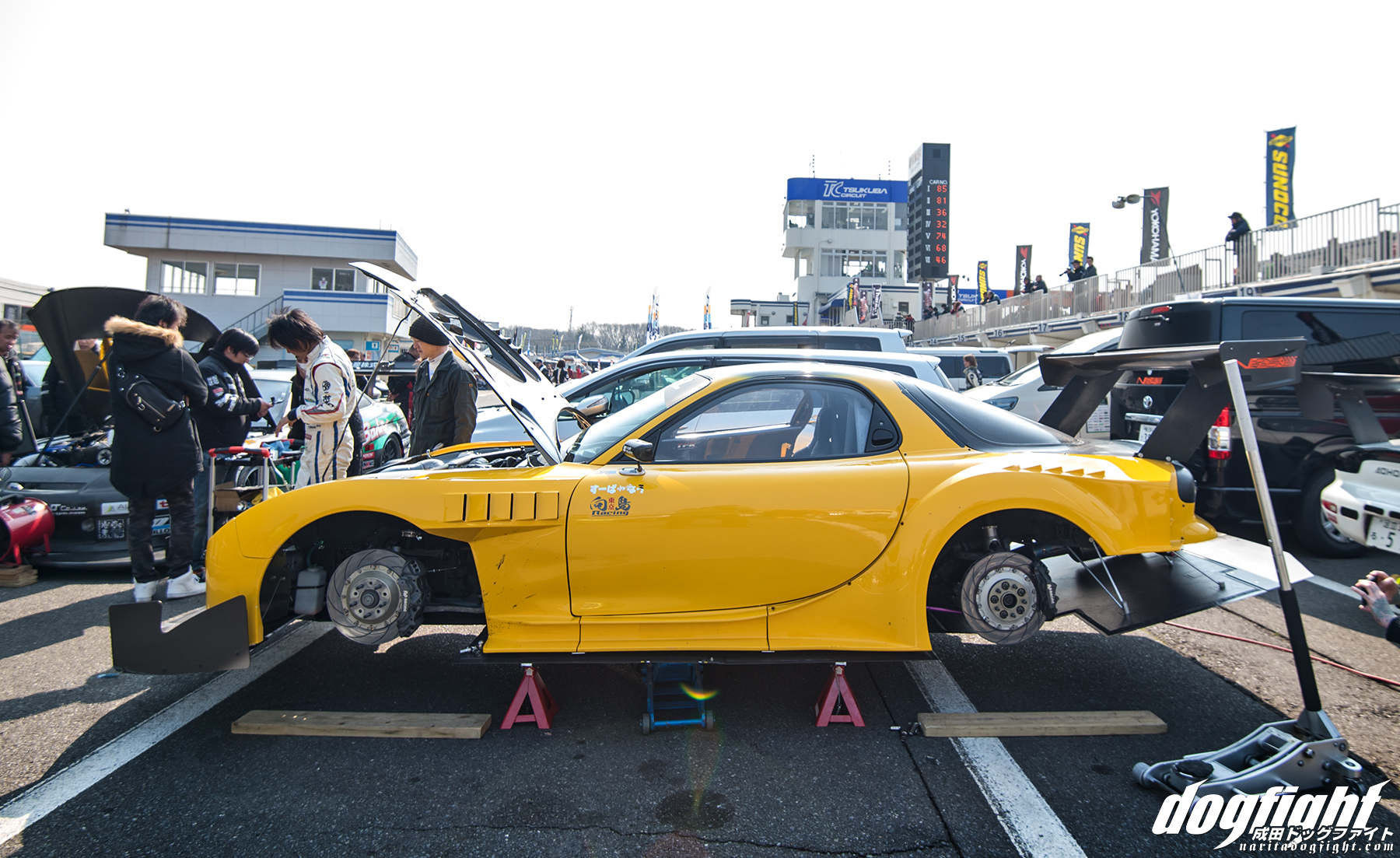 It’s been some time since the paddocks of Japan’s most credible race tracks have been graced with the presence of Ejima Kiyotaka and his TFR built FD3S.  This year, changed all that, as the Attack Tsukuba Championship played host to his return, and the unveiling of his newly rebuilt FD.  I wouldn’t say that Kiyotaka ever cut corners with this car, and it’s performance to date backs that up.  Low 56 second lap times are no joke at Tsukuba; but he wanted more from the car.  To achieve the performance he demanded, he would need to take a step back from competing.

With the competition of this sport in Japan growing at such a rapid pace, developing the car from it’s 2014 state wouldn’t cut it to keep up with the frontrunners.  An almost ground-up build was needed to stay in stride with the ever-changing sport.  The car, still clad in a yellow paint, has been stripped of it’s almost grassroots look of years ago.  Now, aided by the help of PanSpeed, the car has been modernized in its entirety. 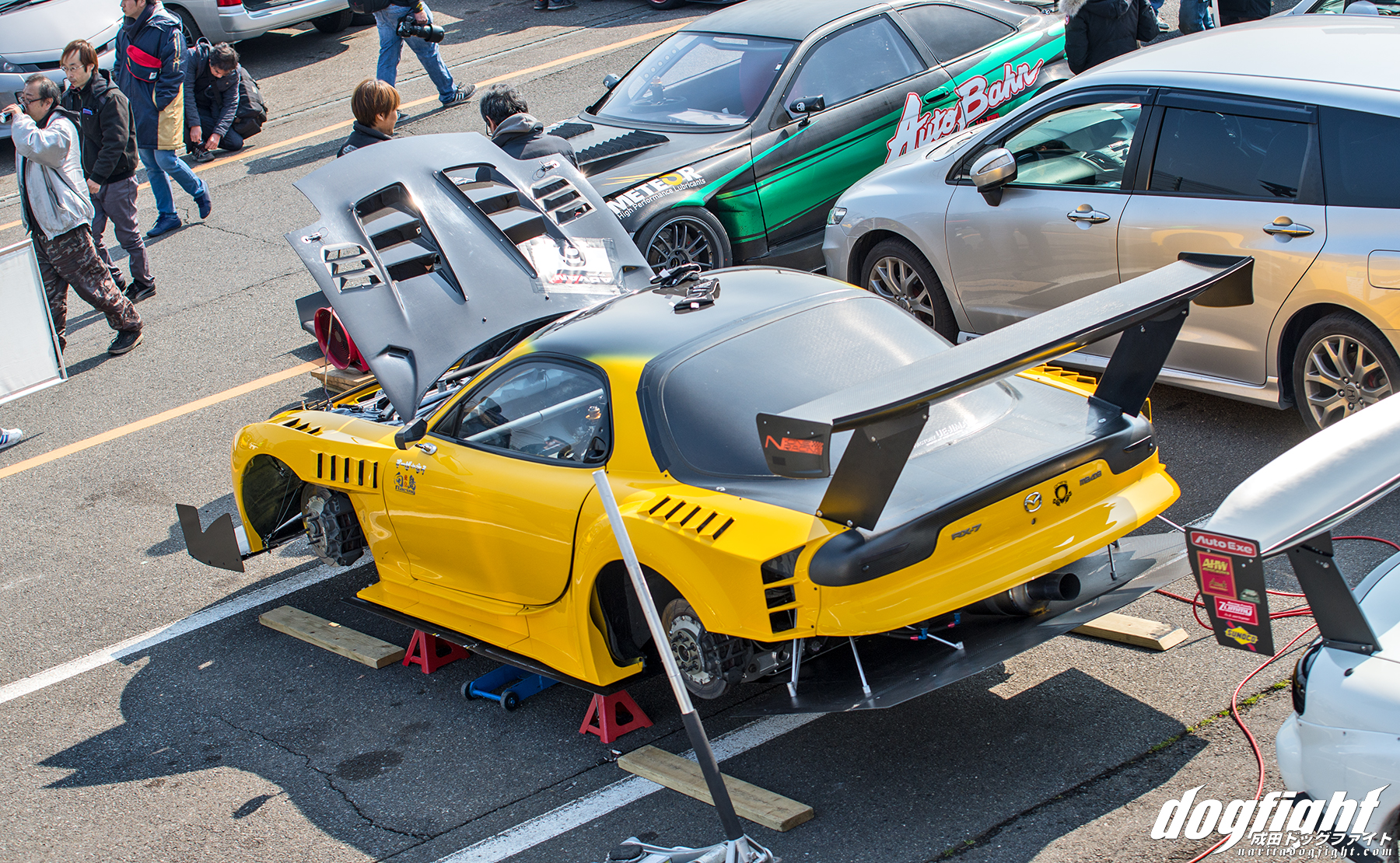 The new PanSpeed widebody kit is complemented by the addition of an all new aero package as well.  An array of custom carbon-laid front splitter, full undertray, and rear diffuser are very competently incorporated into the body.  The difference in execution in comparison to the last time I saw this car is off the charts.  The team must really mean business this time around.

The profile view gives you an idea of how simply constructed the new package is.  The car has always been rather minimal in design, and it would appear they still adhere to this mindset; it’s just a little more refined now. 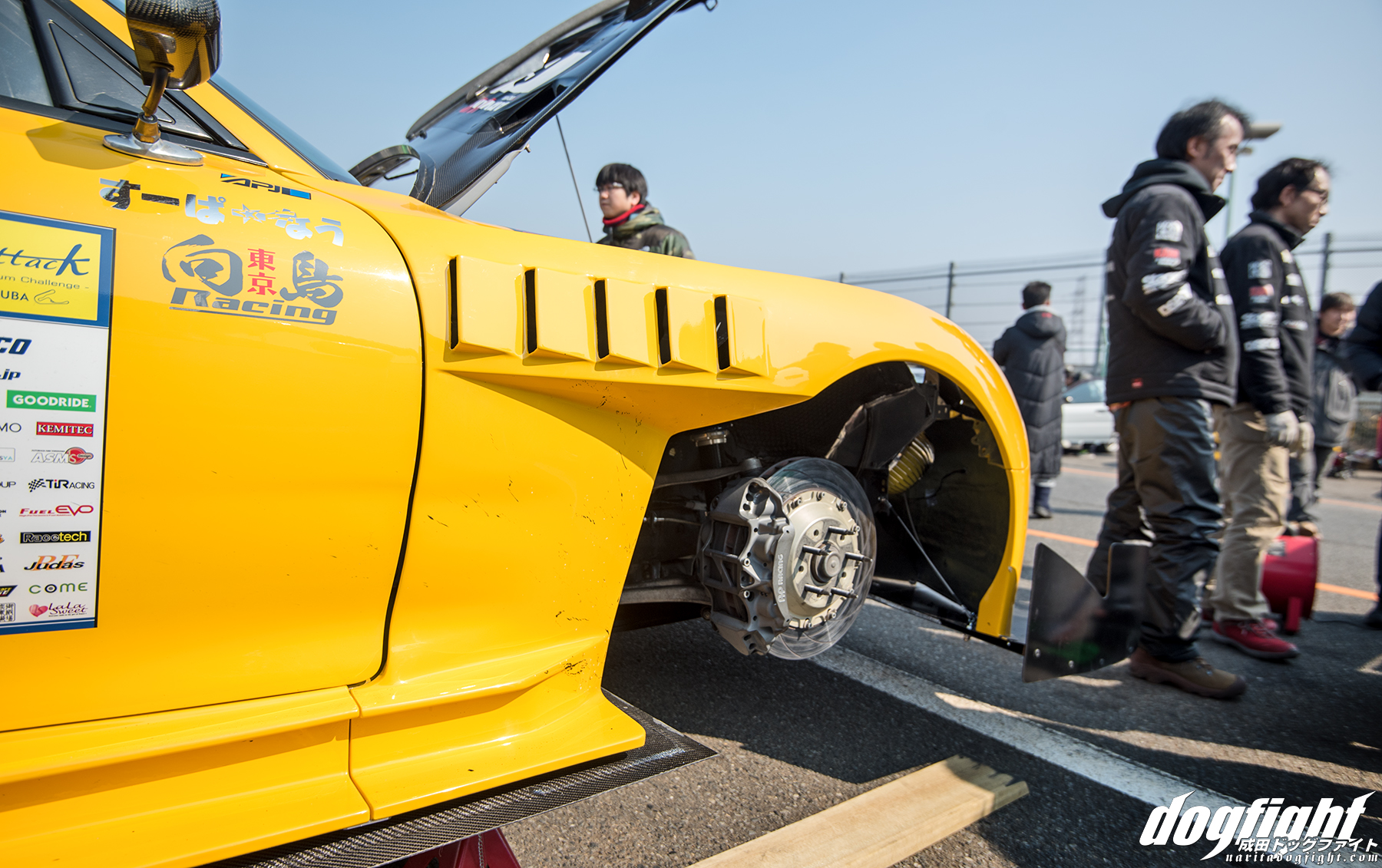 The new fenders allow for the 18 inch Volk wheels to fit much more comfortably than before, and direct air flow in a more efficient manner. 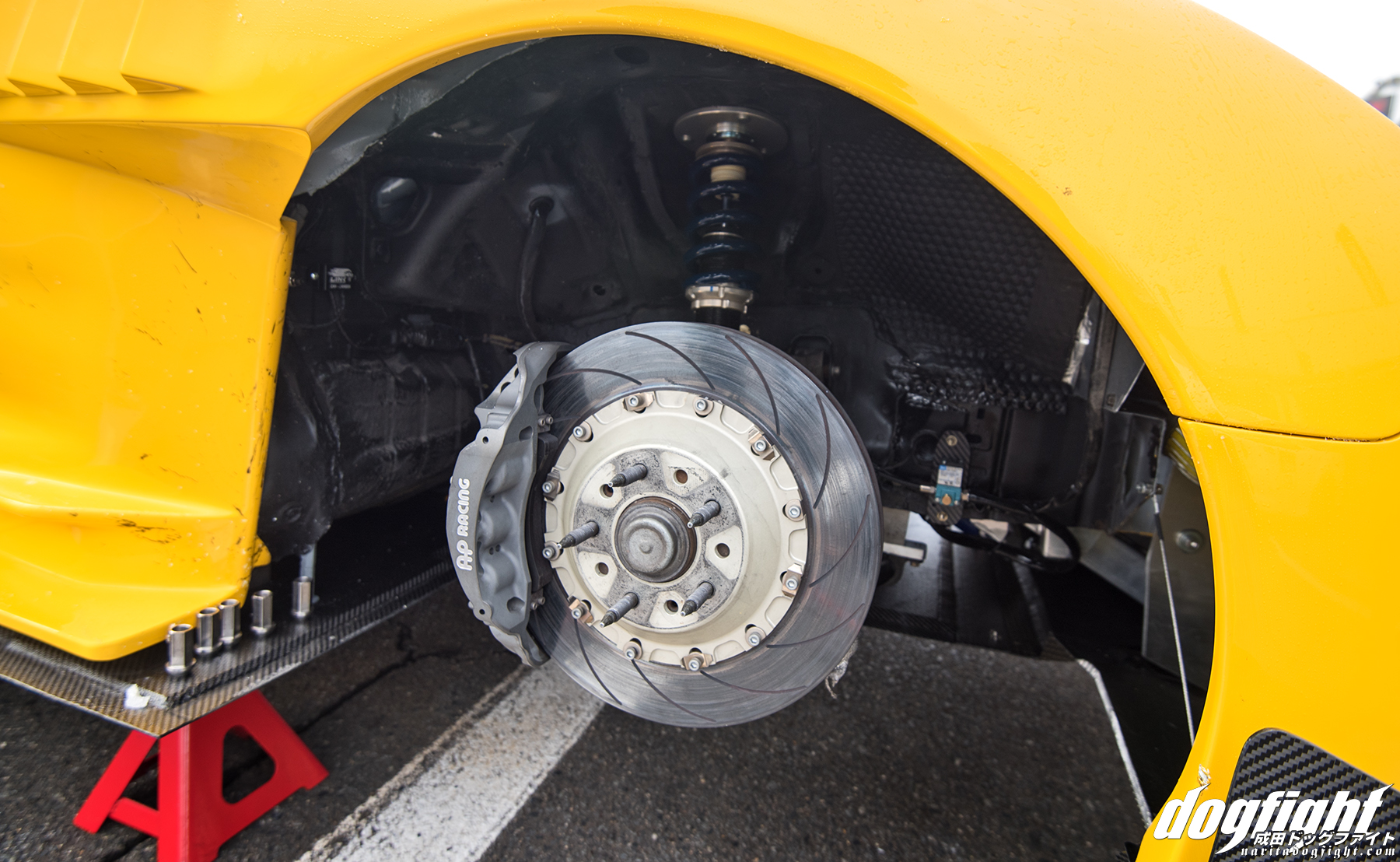 While much of the car has changed, there are a few bits that remain in use.  The lightweight, AP Racing brakes are still in place with the 6 piston Forged Rad-cal calipers up front, and their complimentary 4 piston calipers in the rear.  These are in AP Racing’s GT Range line and I can’t imagine them needing to improve on this aspect of the car.  Multiple sensors housed inside the wheel well help with data logging on track.  Everything on this car is being recorded and used to further improve lap times. 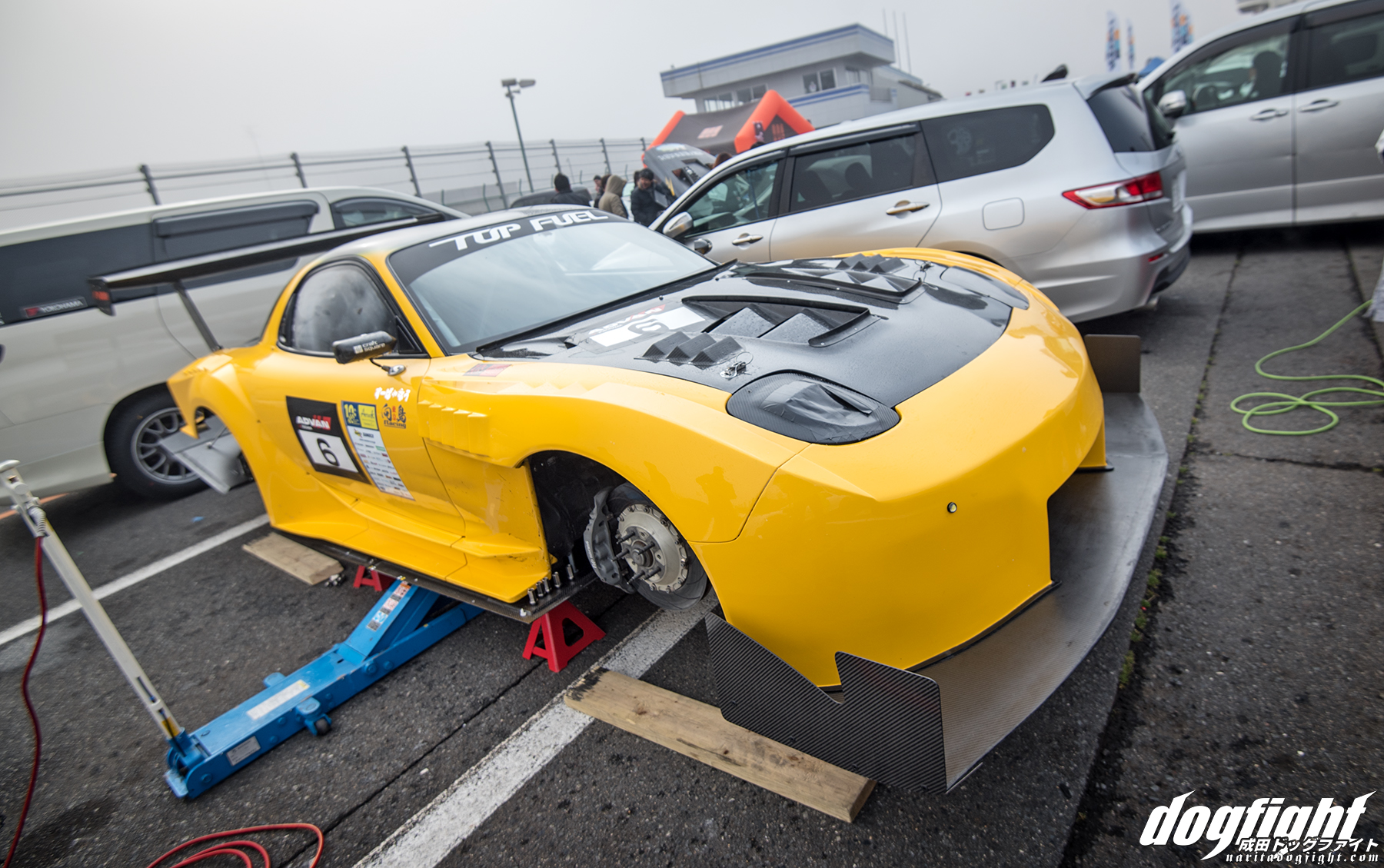 The package really comes together up front with a new custom front bumper that is tied into the front splitter and it’s massive fences on either side.  The hood as been treated to more ventilation to help remove excess heat from the bay. 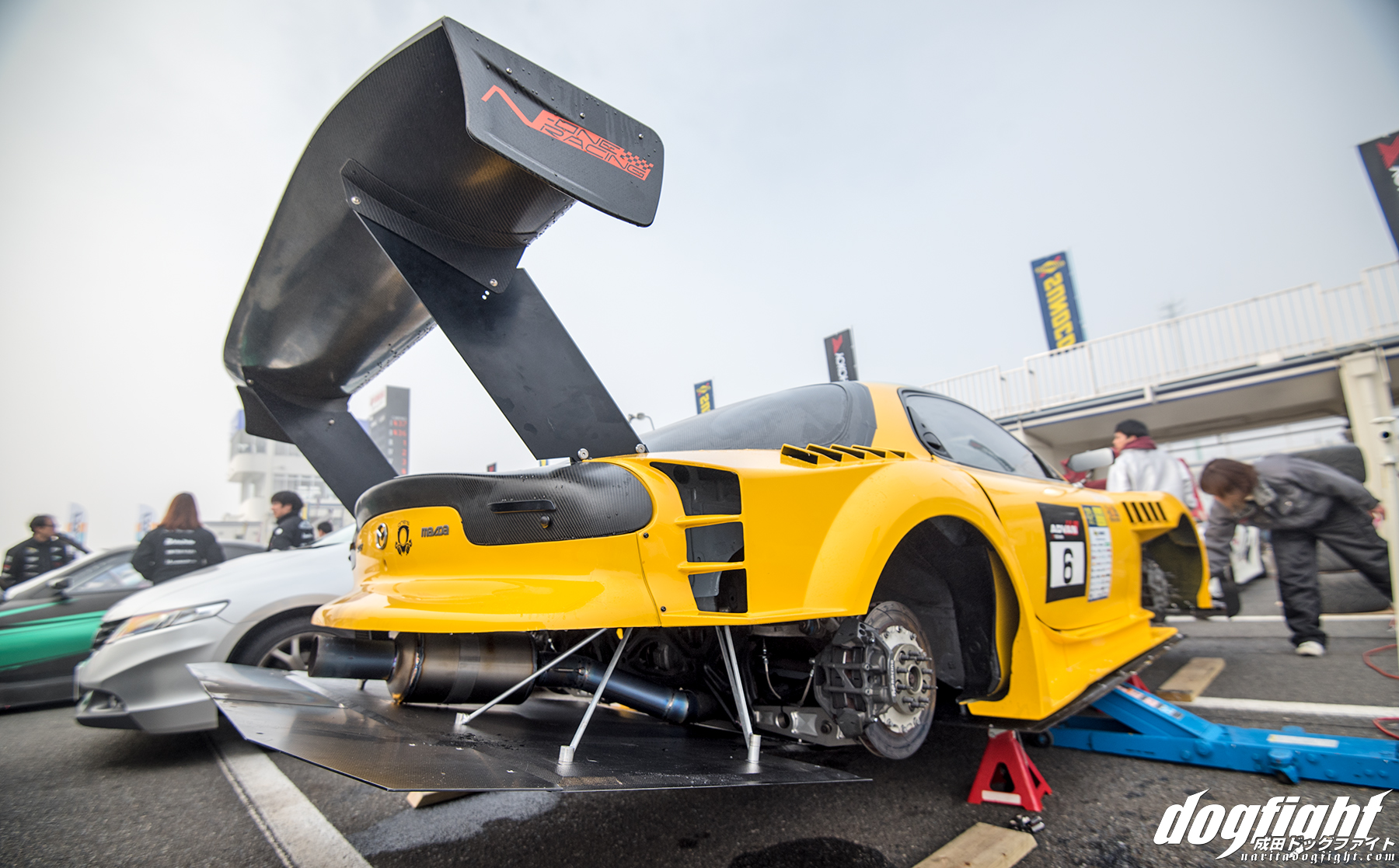 The way the rear diffuser is mounted is very well executed, with the support beams stemming from the chassis.  A full titanium exhaust rests just above, and helps reduce the overall weight of the car.  Surprisingly enough, the same wing and stands were utilized with the new setup – which goes to show that more isn’t always necessary if the car is balanced. 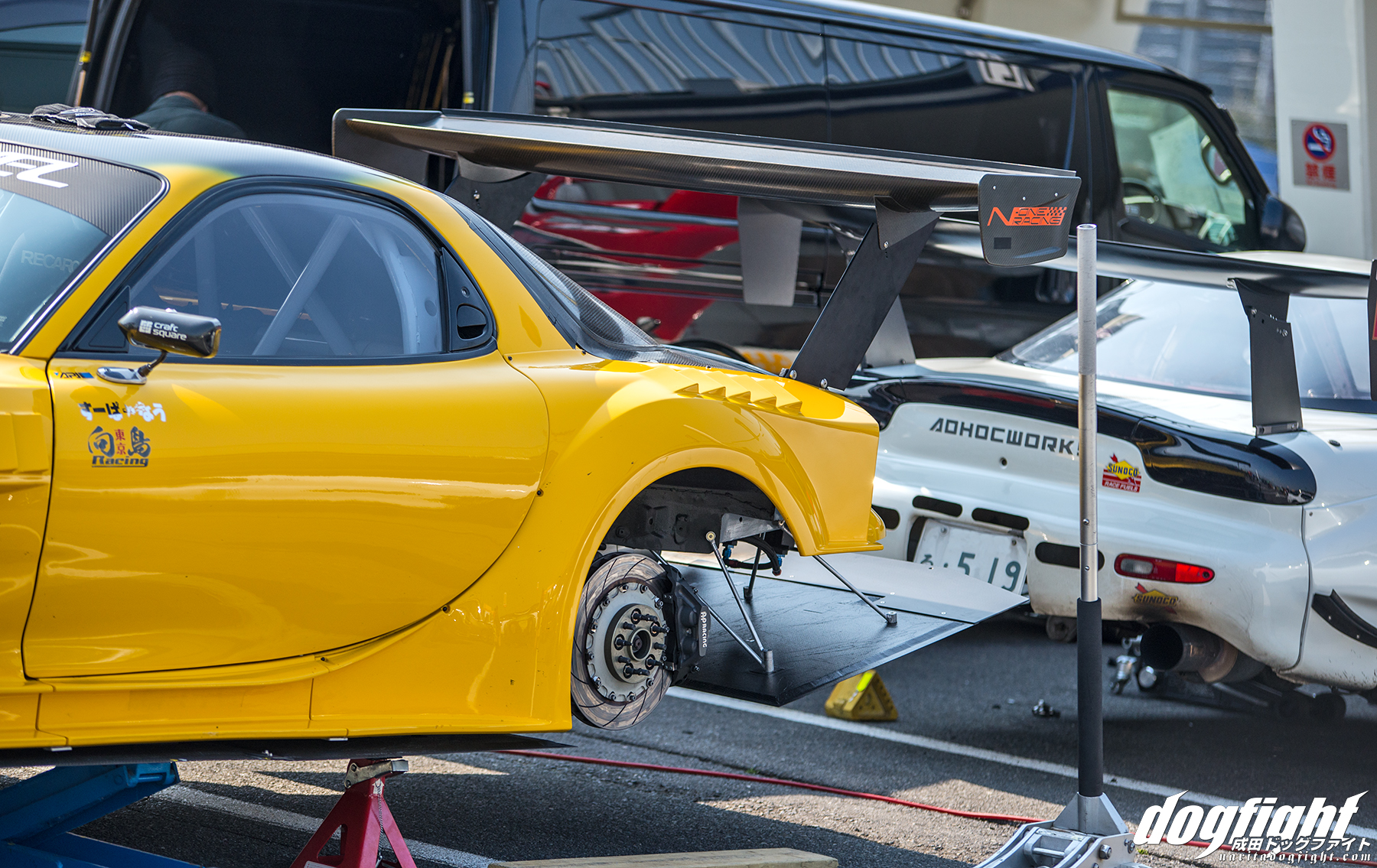 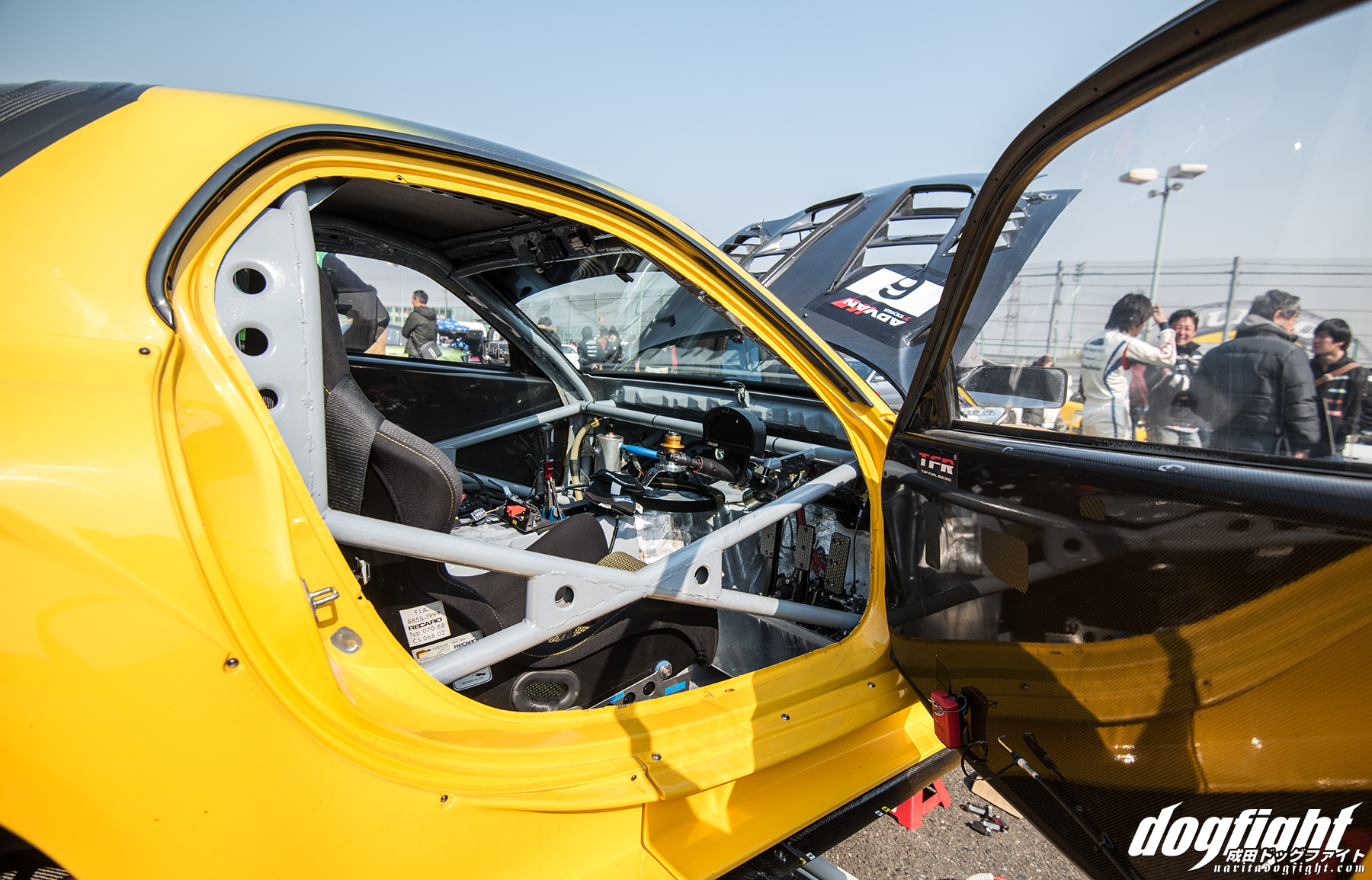 Carbon doors and an integrated carbon roof help to lighten the car up, and make the car that much more impressive.  The interior doesn’t leave much to the imagination, as the majority has been removed to now house only the essentials. 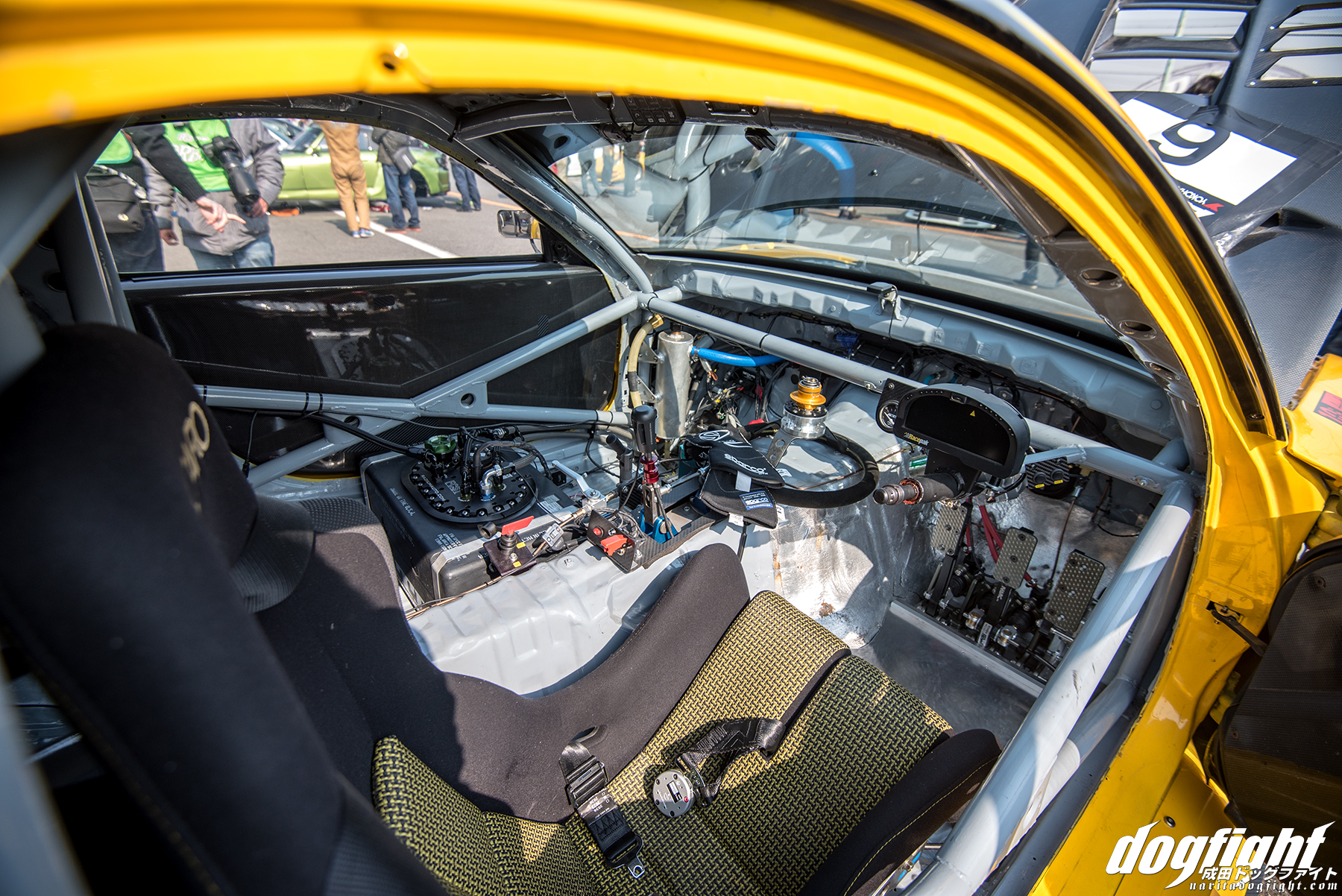 A Racepak display gives Kiyotaka all the info he needs on track, and stores a plethora of information to be used later.  A carbon Recaro bucket seat and floor mounted pedals are perfectly positioned for him to drive  – the sequential transmission shifter just within reach. 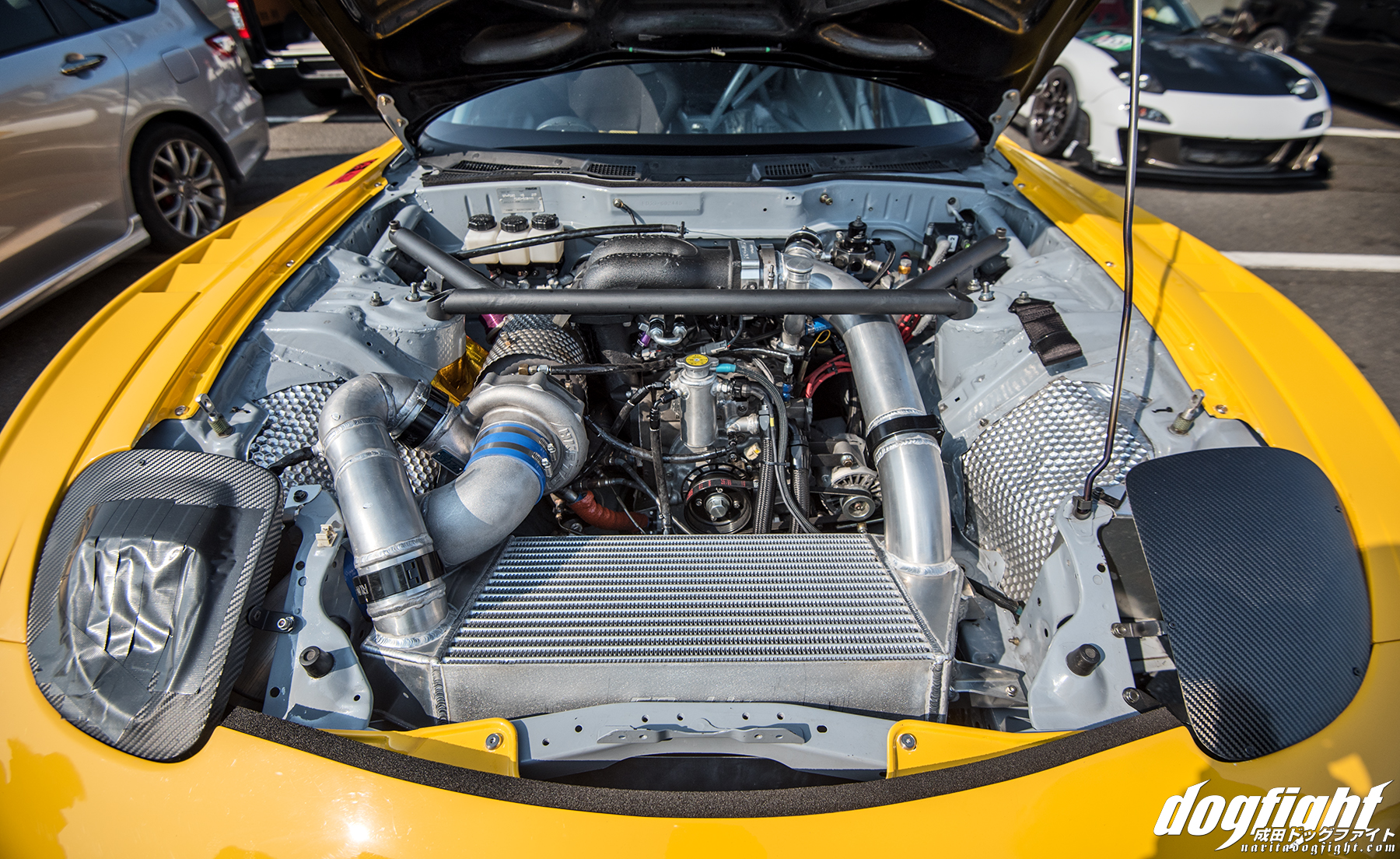 Naturally the motor was pulled and completely rebuilt.  Back in 2015 you can see that the front end had a lot more bracing than it does now.  I’m wondering if they realized it wasn’t needed, or if they compensated for it elsewhere in the chassis.  A T51R now produced the bulk of the power from the rotary engine. 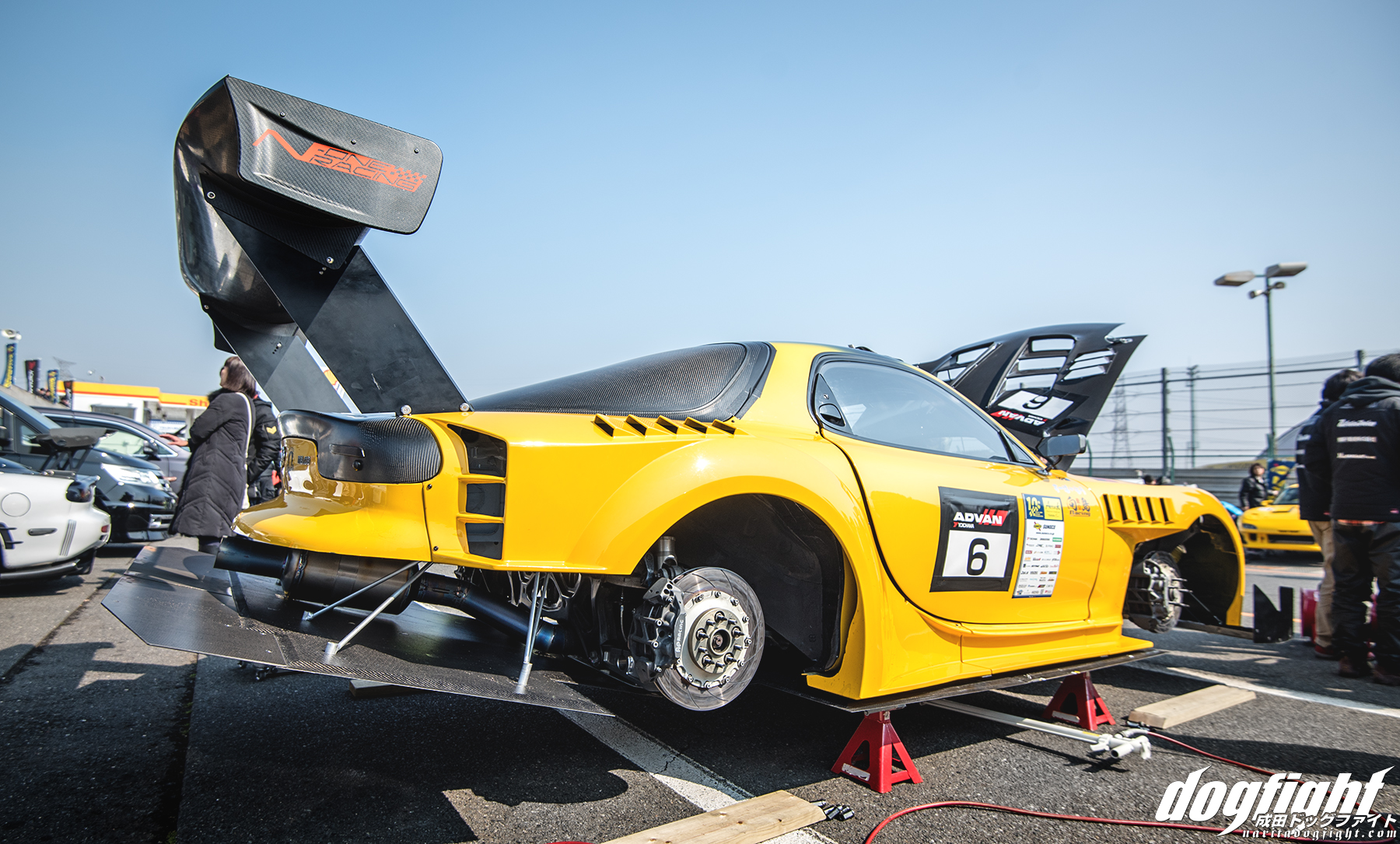 Truly a shakedown event for the team, no transponders were used, and as a result the car didn’t record any official times. 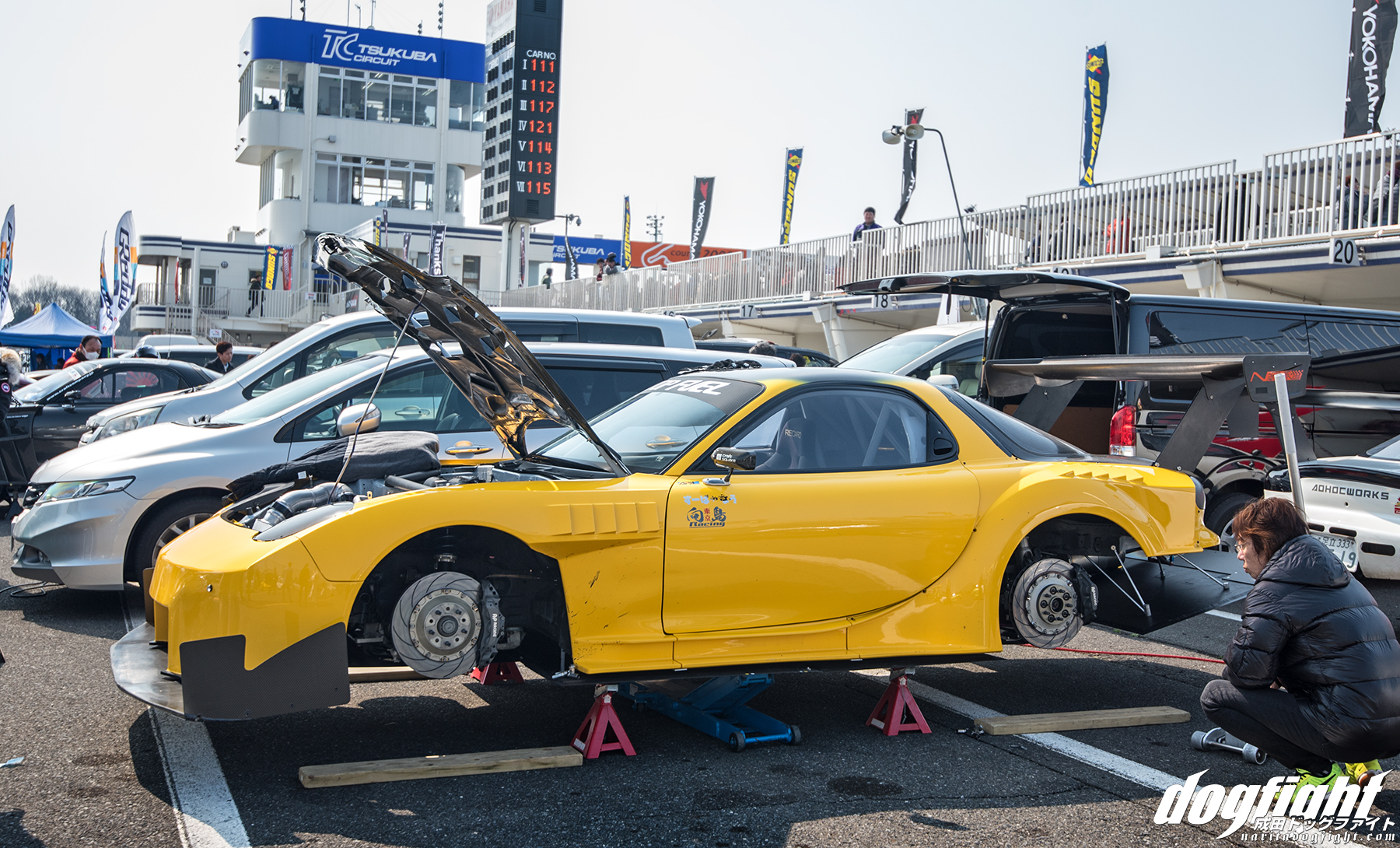 I can only imagine the excitement Kiyotaka is feeling to finally drive his creation once again.  If this car performs as they expect, we can add another contender in line for the coveted sub-50 lap time at TC2000.