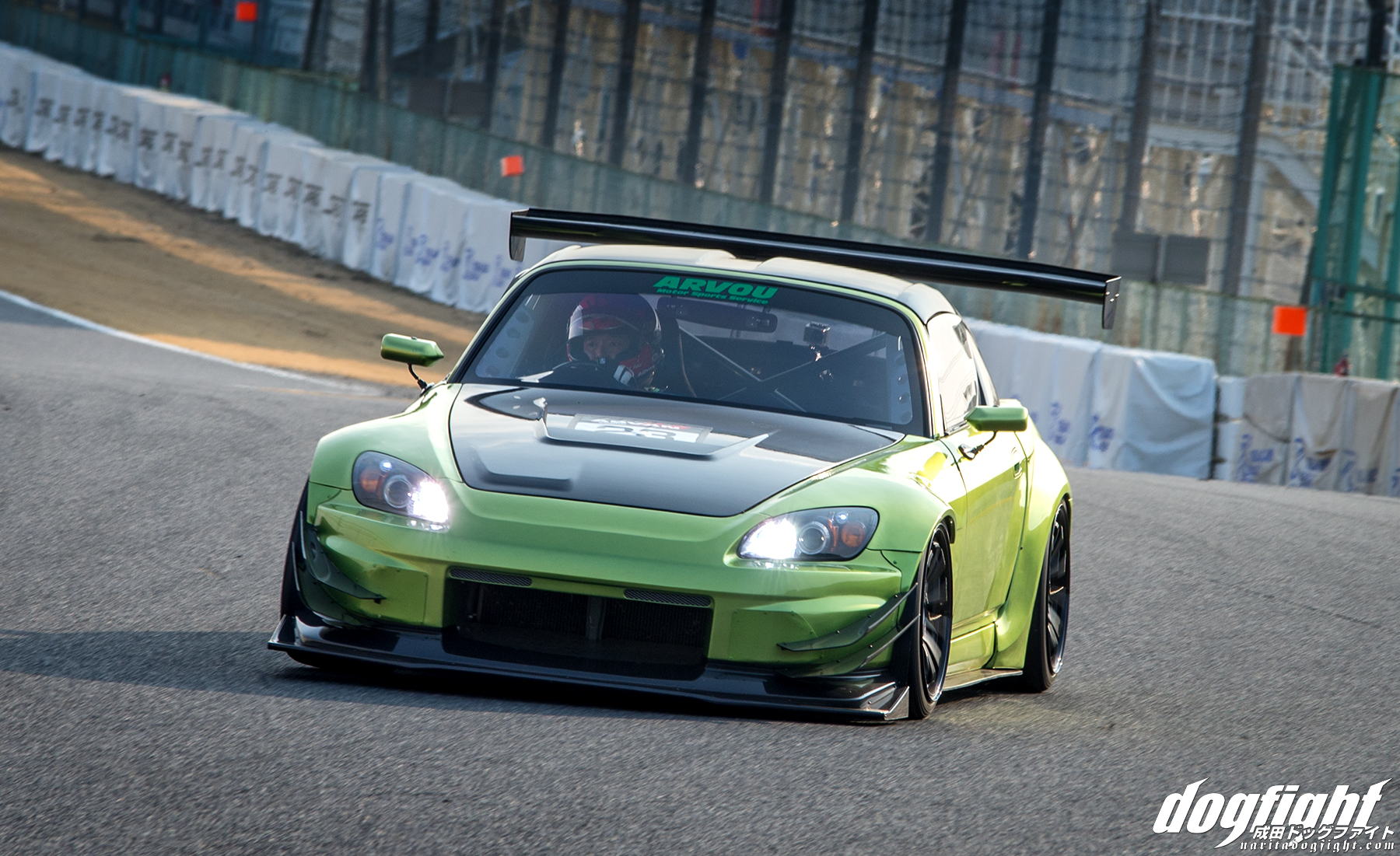 There seems to be at least one privateer in every class of time attack that is always looming just behind the top teams record times.  They typically don’t have the resources afforded to them from owning a shop, and usually rely on the knowledge of a particular ‘support’ shop to assist them in getting their cars to where they want them.  Despite their disadvantage, they close the gap to the frontrunners of the sport, time and time again.  Yoshitaka Ishii and his bright green S2000 are a prime example of this.

Dubbed the “黄緑S2000” (Kimidori; a mashup of the Japanese words yellow and green – 黄 and 緑, respectively) by Ishii-san himself, the yellowish green S2000 has the engineering support of Arvou; the Tochigi based motor sport shop.  One of the platforms that Arvou specializes in is the Honda built roadster, and so it was an easy choice for him when it came time to start building his car.  Looking rather mild in comparison to others in the paddock, the two Arvou S2000’s, the white one belonging to Kobayashi-san, stood out in their own way.  Well, Ishii’s stood out because it’s brilliantly green…

On the Attack homepage, he jokingly lists his target time as ‘Orange’, no doubt referring to Fura’s Imola Orange S2000, which set a 57.376 during the Attack Championship in December of last year and has since retired from the spot (come to think of it, I don’t think I had ever written about that car…maybe I will revisit it).  While he regrettably lost out to ASM’s time by a good half second, he was still incredibly proud to get so close to the prior record with a 57.585, and one step closer to his target time.  An incredible, tear-inducing drive considering what he was up against. 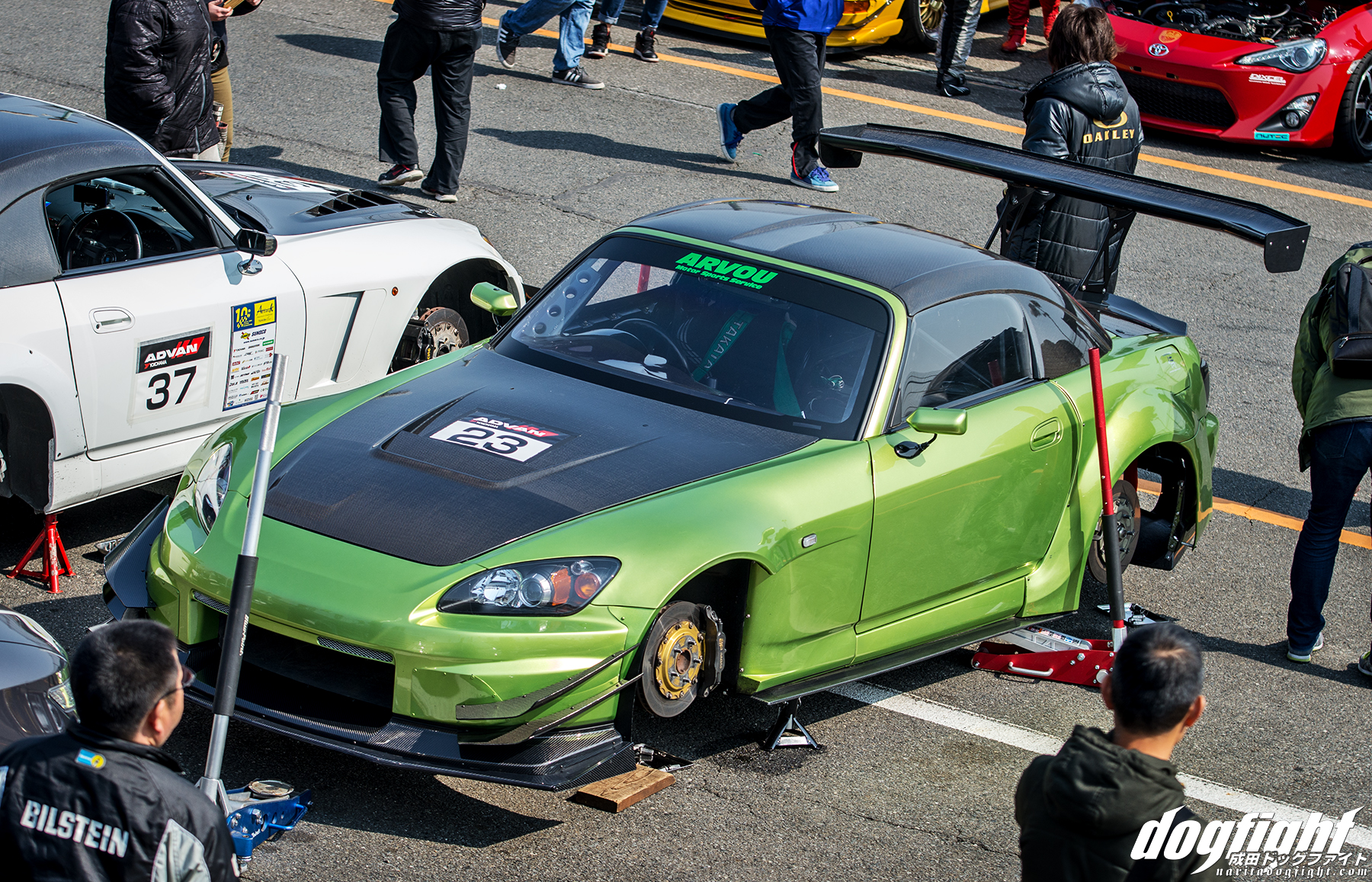 I usually try to leave my personal opinions out of the articles I write (do I?), but this car really held my attention in a way others don’t.  I couldn’t help but keep returning to this car to look it over at the event.  There was just something about it that struck an extremely well executed balance; half unstoppable track build and half everyday utility.  It had mannerisms that current day attack cars just don’t have anymore.  Now, whether or not it actually possessed ‘everyday utility’ is beyond me; I can imagine it’s still wouldn’t be pleasant to drive to work.  It sure looked the part though. 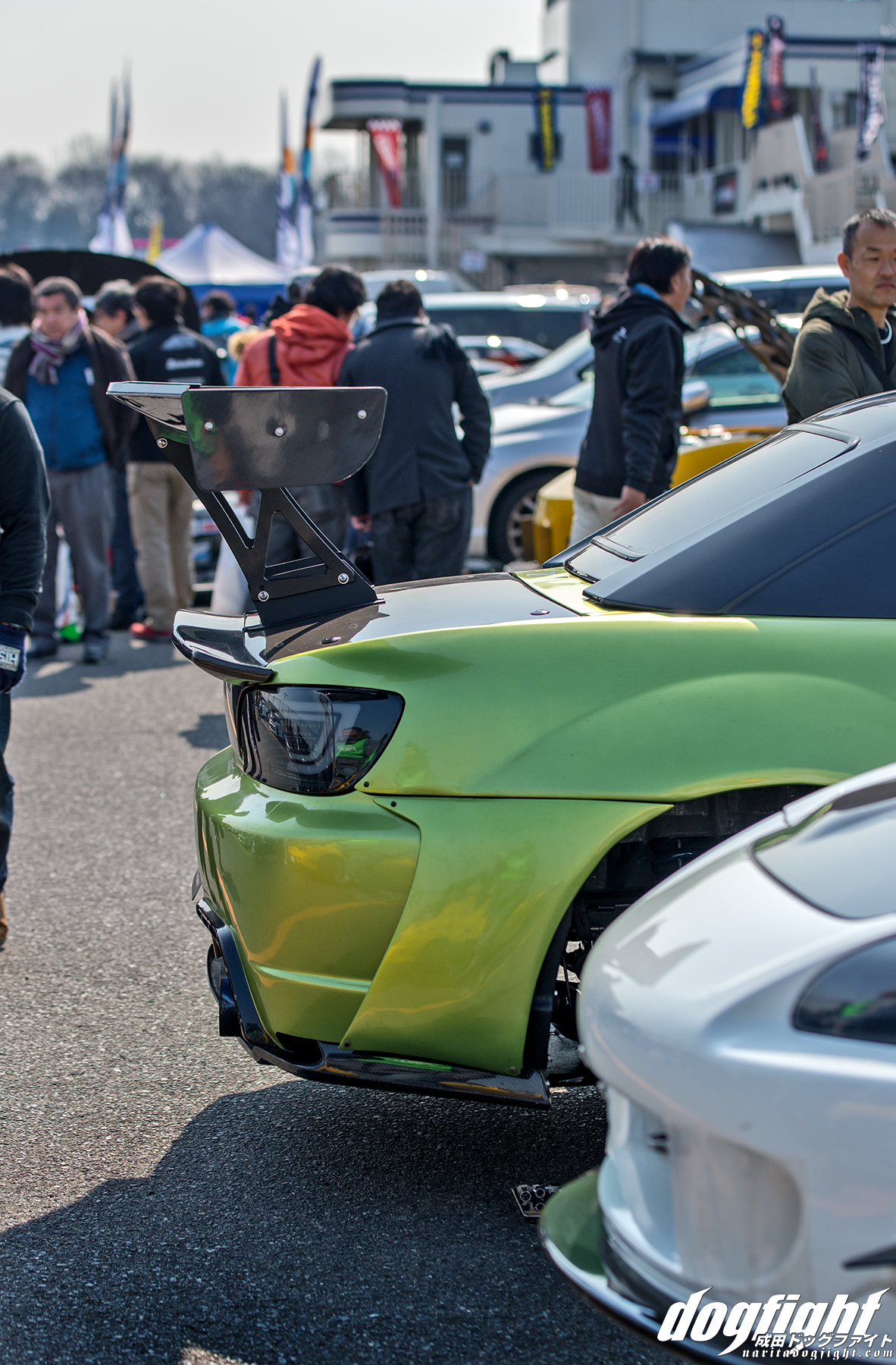 It had almost no continuity in the exterior parts selection.  A combination of a Voltex front bumper, J’s Racing fenders, an Ings+1 rear bumper, K1 Lab trunk spoiler, and rear overs I’ve seen on no other car (thanks to a fan we know now that the rear fenders are from CG Amis – thanks!)  A mixture of parts that, quite obviously, work together in making a very unique appearance. 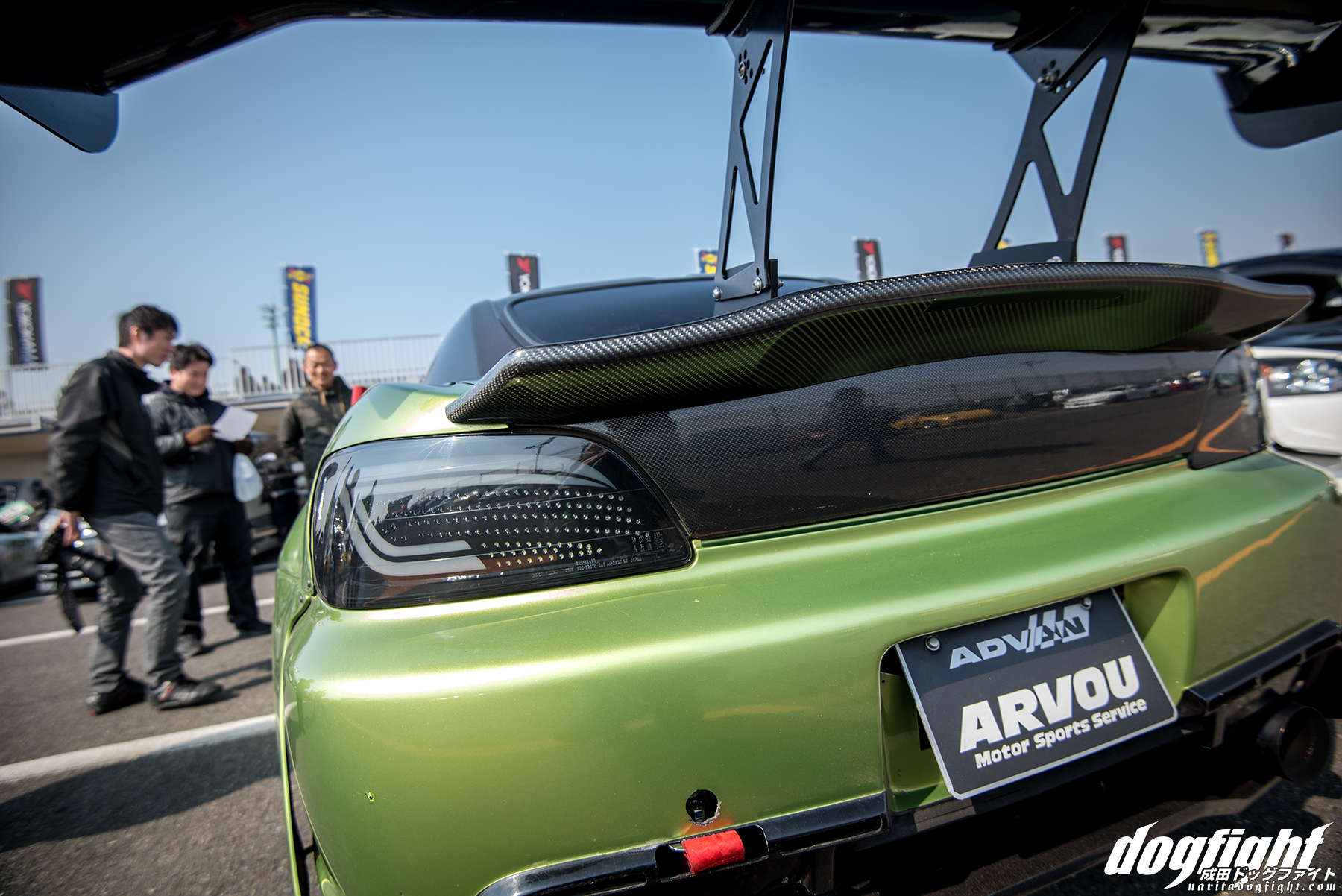 Car Shop Glow taillights give it that extra little flare in the rear, and help to modernize the look. 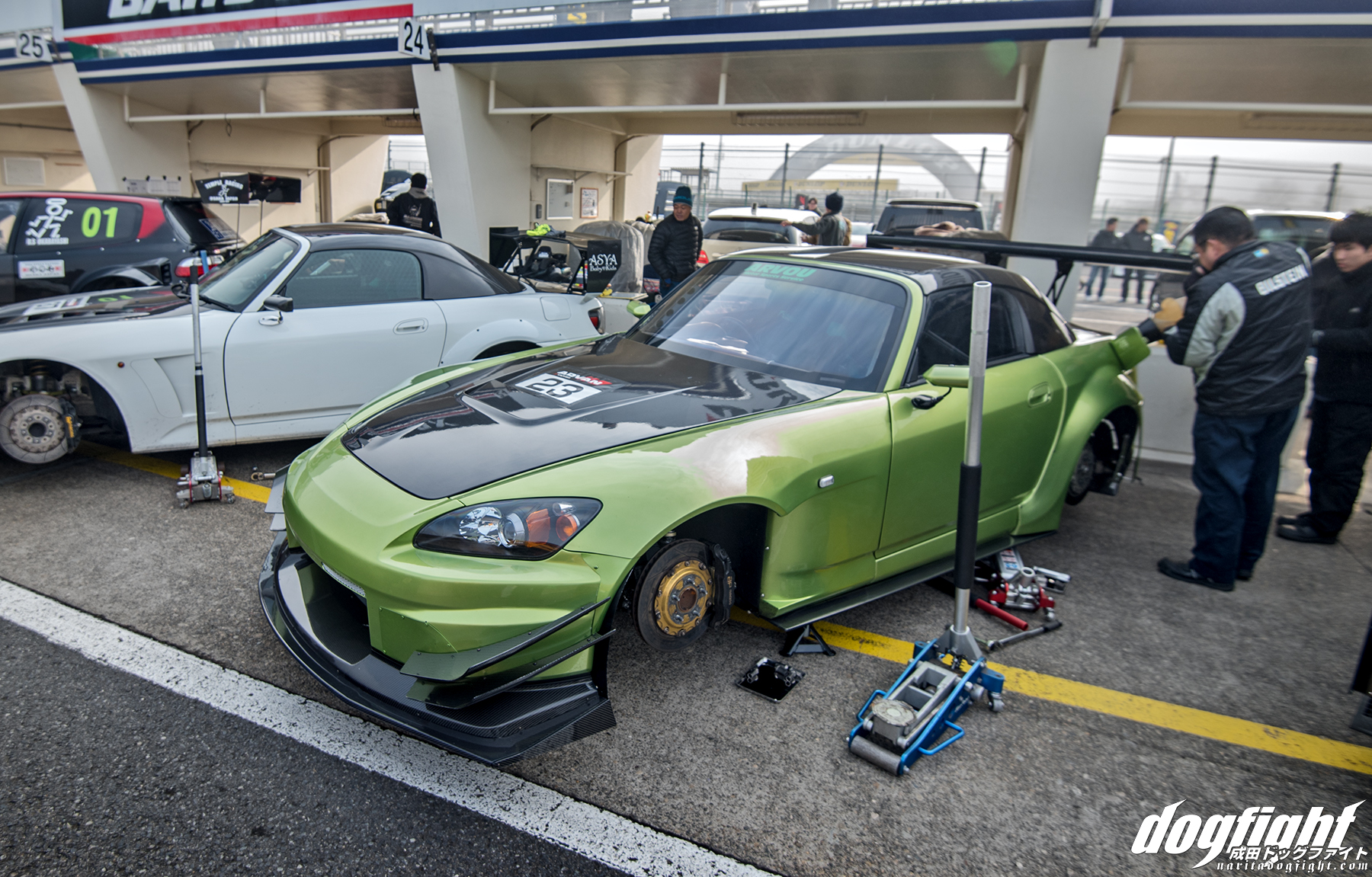 AP Racing was enlisted to provide big brake kits for each corner.  Giving the car just the right amount of stopping power to balance out the weight, the power, and the grip of the meaty 295/30 series A050’s.

The interior has been stripped, leaving nothing but the drivers seat, a custom dash and steering wheel.  A custom roll-cage has been welded in and gusseted to the A-pillars to increase the chassis’ rigidity on track. 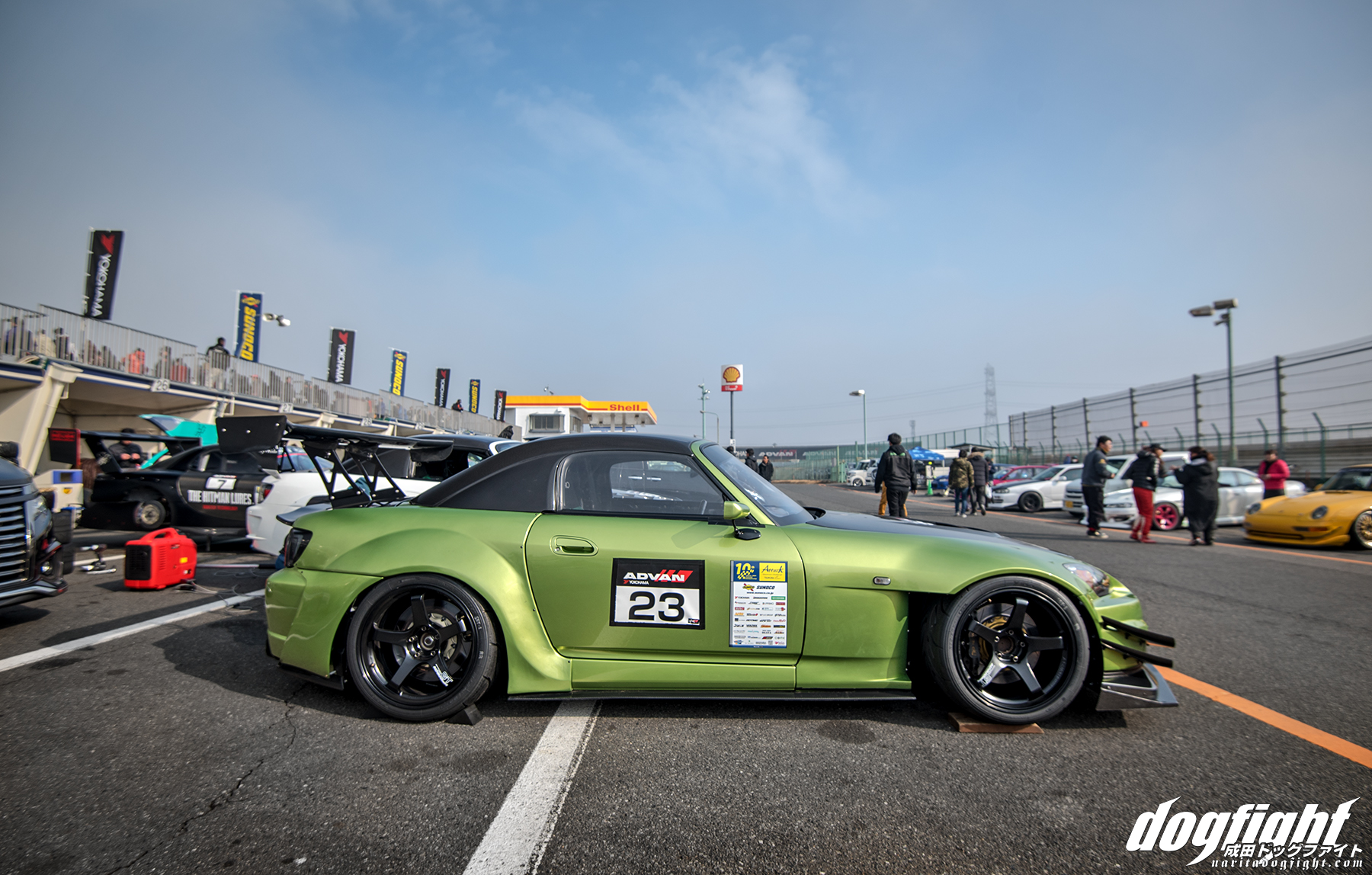 The 18″ Advan GT’s in gloss black are a great contrast to the vivid paint color.

The car sits on Arvou spec’d Circuit Ennepetal/Bilstein dampers with HyperCo springs.  The suspension has been tested by Arvou in their previously built S2000 demo cars, and perfected by years of track time. 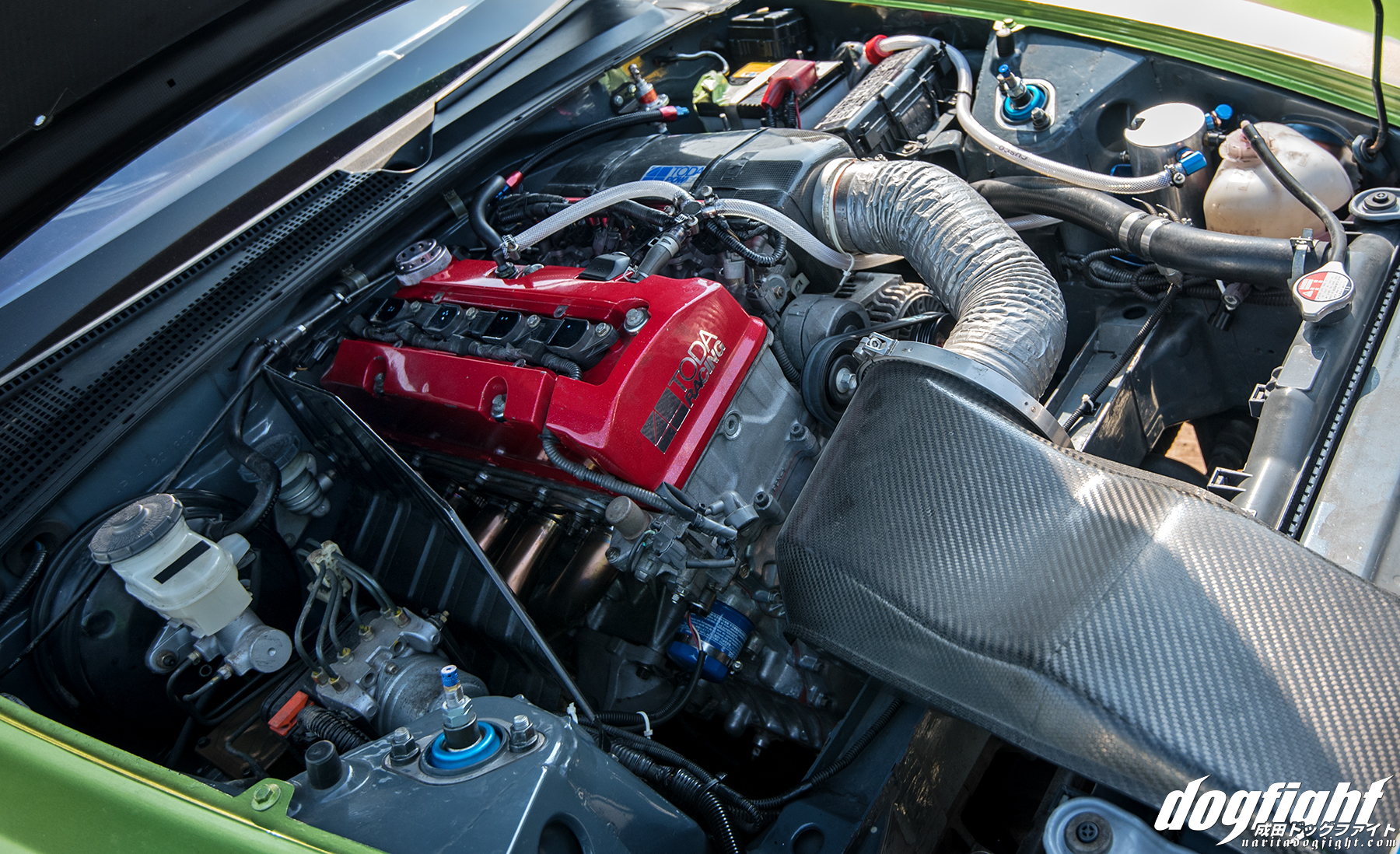 The F-series has been pulled and given the full treatment that includes a TODA 2.4 liter stroker kit.  High compression, 12:1 forged pistons, and I-beam forged connecting rods give the bottom end the strength to hold together all 330ps that the motor puts out.  A built head and TODA ITB’s complete with their carbon power surge tank, help to increase mid-range torque numbers.  Without the aid of any forced induction, Ishii knew he would need to extract everything he could from the motor.  No corners were cut in this department.

Naturally, a sequential 6-speed has been paired to the package; almost a mandatory upgrade if you’re going after the times Ishi is. 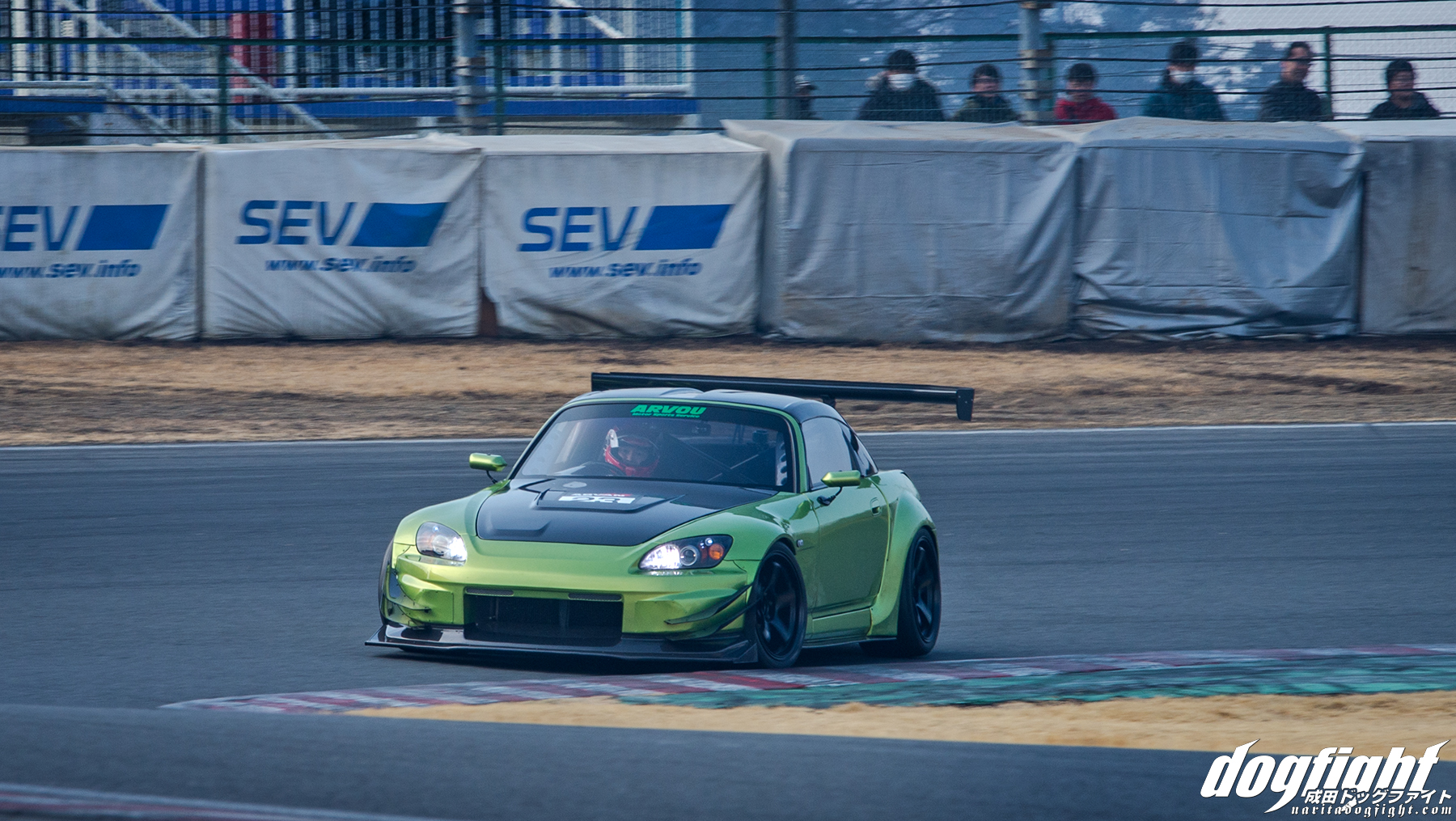 It was apparent on track as well, with the rear end pushing out of the first hairpin anytime he tried to lay on the power. 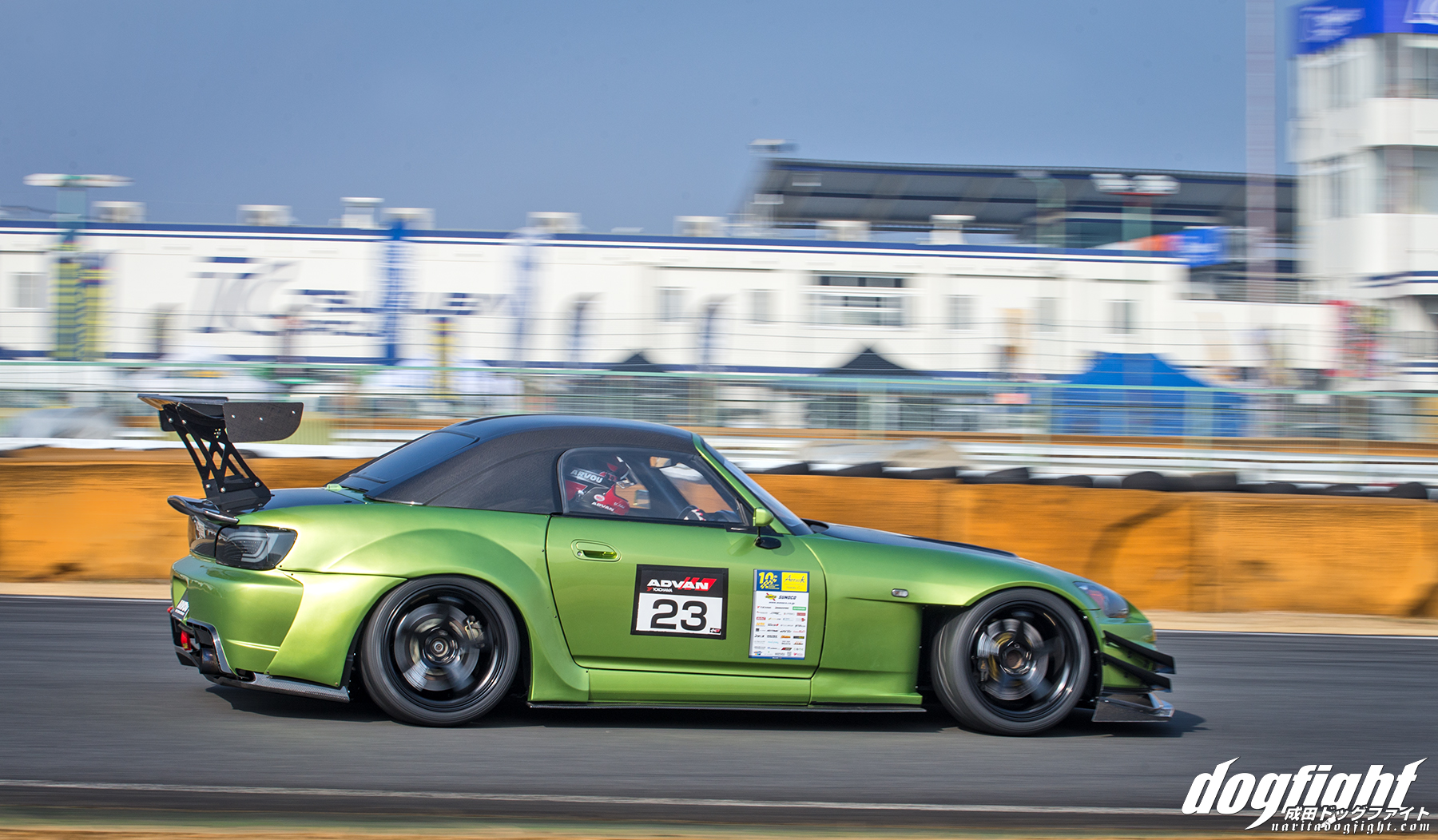 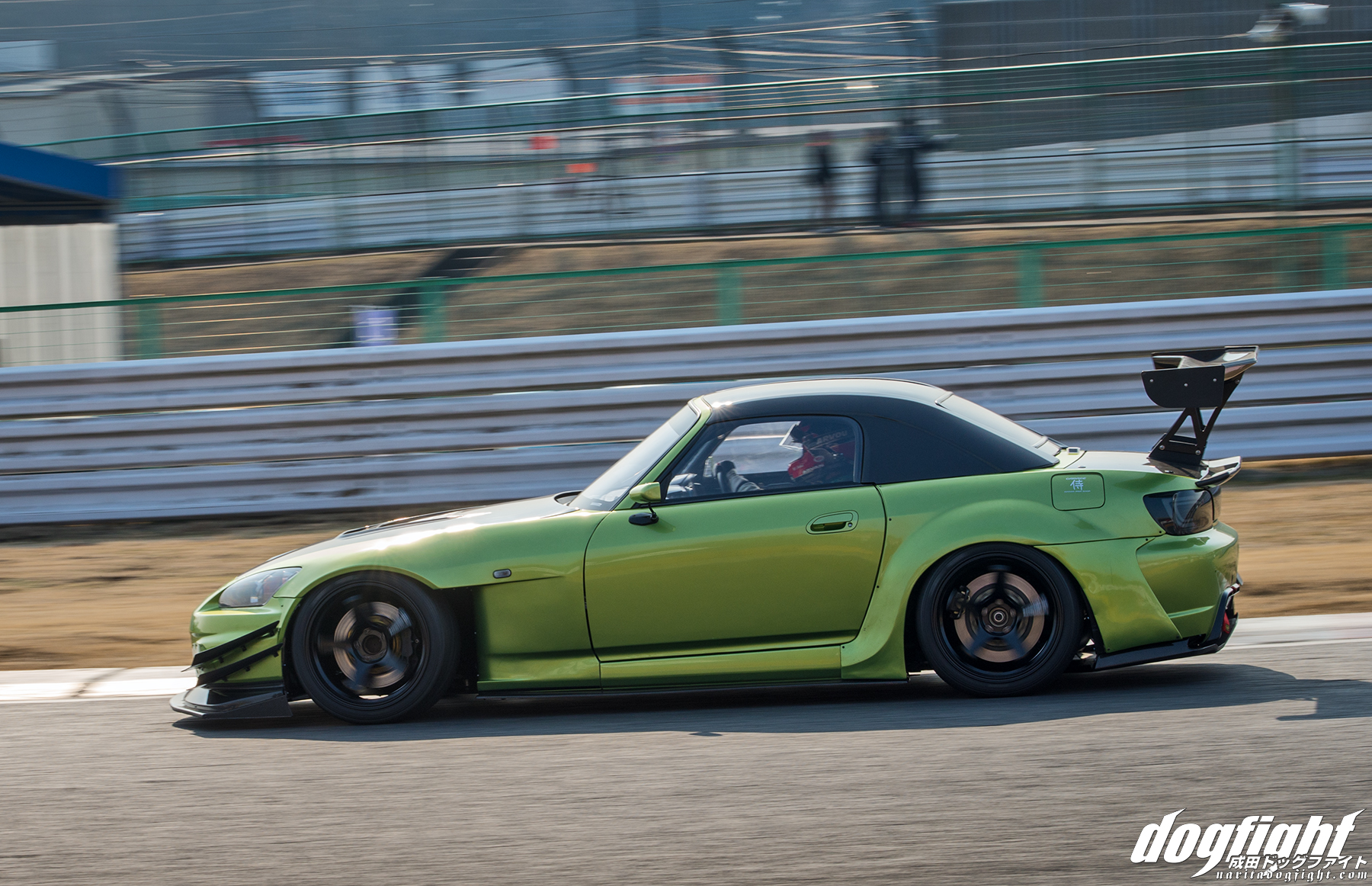 It’s a package that wouldn’t necessarily look out of place if you saw it driving down the street in Japan.  Sure, it would turn heads, but it doesn’t have that outlandish look that most sub 58-second cars have.  It’s almost like the Honda equivalent of the Garage Ito R34 – minus a few hundred horsepower. 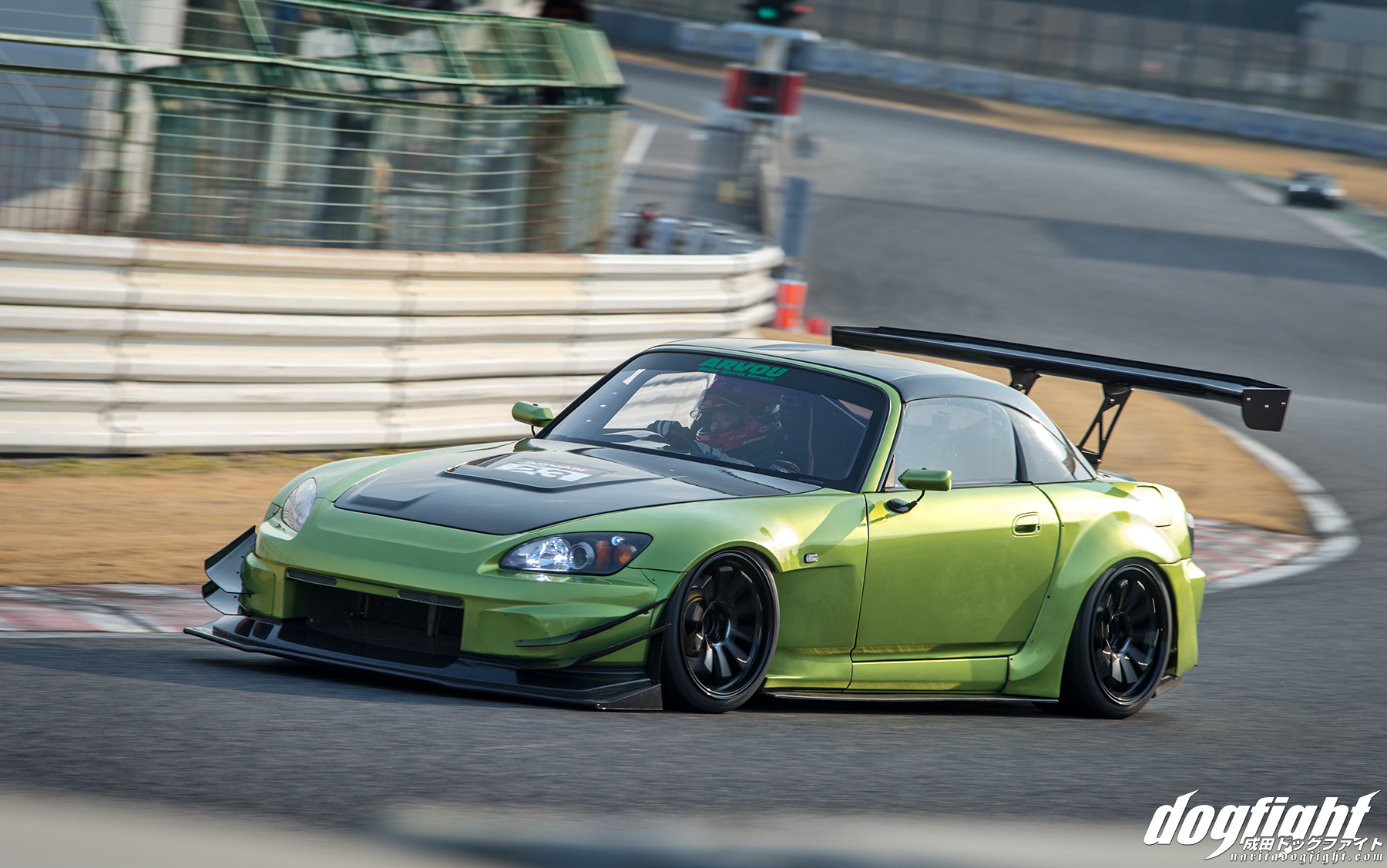 At any rate, the car is an amazing example of how serious the private sector of this sport is getting.  More importantly, it serves as a reminder that you can have a fast, very good-looking car, and you don’t have to sacrifice one for the other.  I wish the team all the best in their quest to catch the ghost that Fura left behind last year.

Check out his hot lap below: