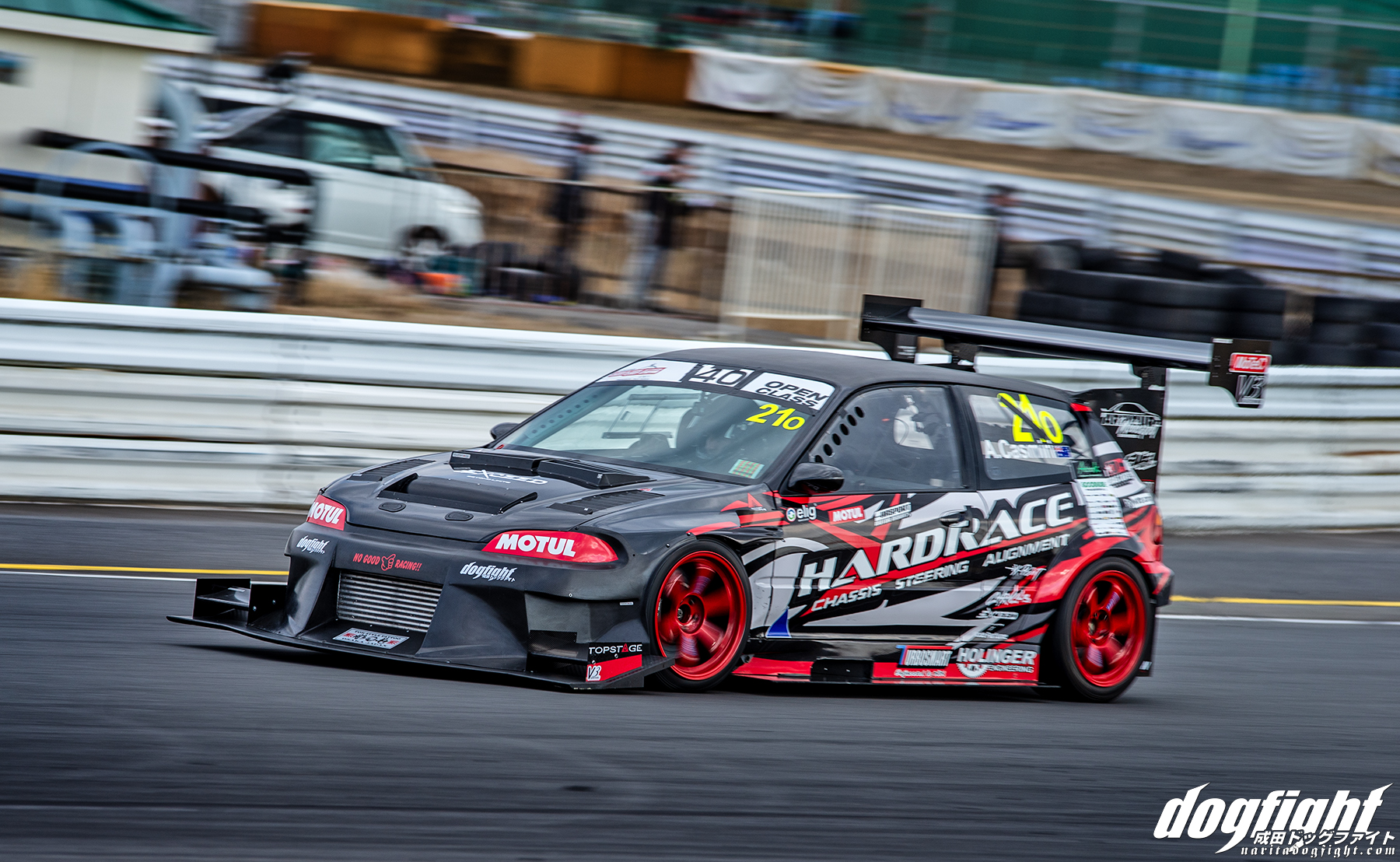 As per the norm, Tsukuba Circuit was rented out by various hosts the day before the main event of Attack Tsukuba, allowing for the Attack competitors a chance to test and tune car settings.  In this case, Sato-san from Unlimited Works hosted the first half of the day, and Takeo Fukazumi from Zummy Racing Family took on the afternoon.

This is not only a courtesy, but for those traveling from far away, it’s a necessity to get acclimated to the circuit.  The teams that were competing from abroad, Will Au Young with Team Vibrant, Adam Casmiri with the JDM Yard camp, and Kenneth Lau from HK all took advantage of the test day and were on-site bright and early Friday morning.  Which is more than I can say for myself…

Before the festivites kicked off the next day though, we had stopped by Masa’s shop X-Point Import to check in with the Australians to see how they were getting along in Japan.  Masa is good friends with Yasu from Exceed, and helped arrange for the receipt and housing of the JDM Yard EG6 for its tenure in Japan.

The car’s suspension and motor setup was almost identical to that of it’s last event at WTAC back in October.  However, after the off that Adam experienced in the last session they opted to make some changes to the overall aerodynamics of the car before shipping it off to Japan.  Having a damaged front bumper sort of unwillingly segwayed them into revamping the entire car’s exterior. 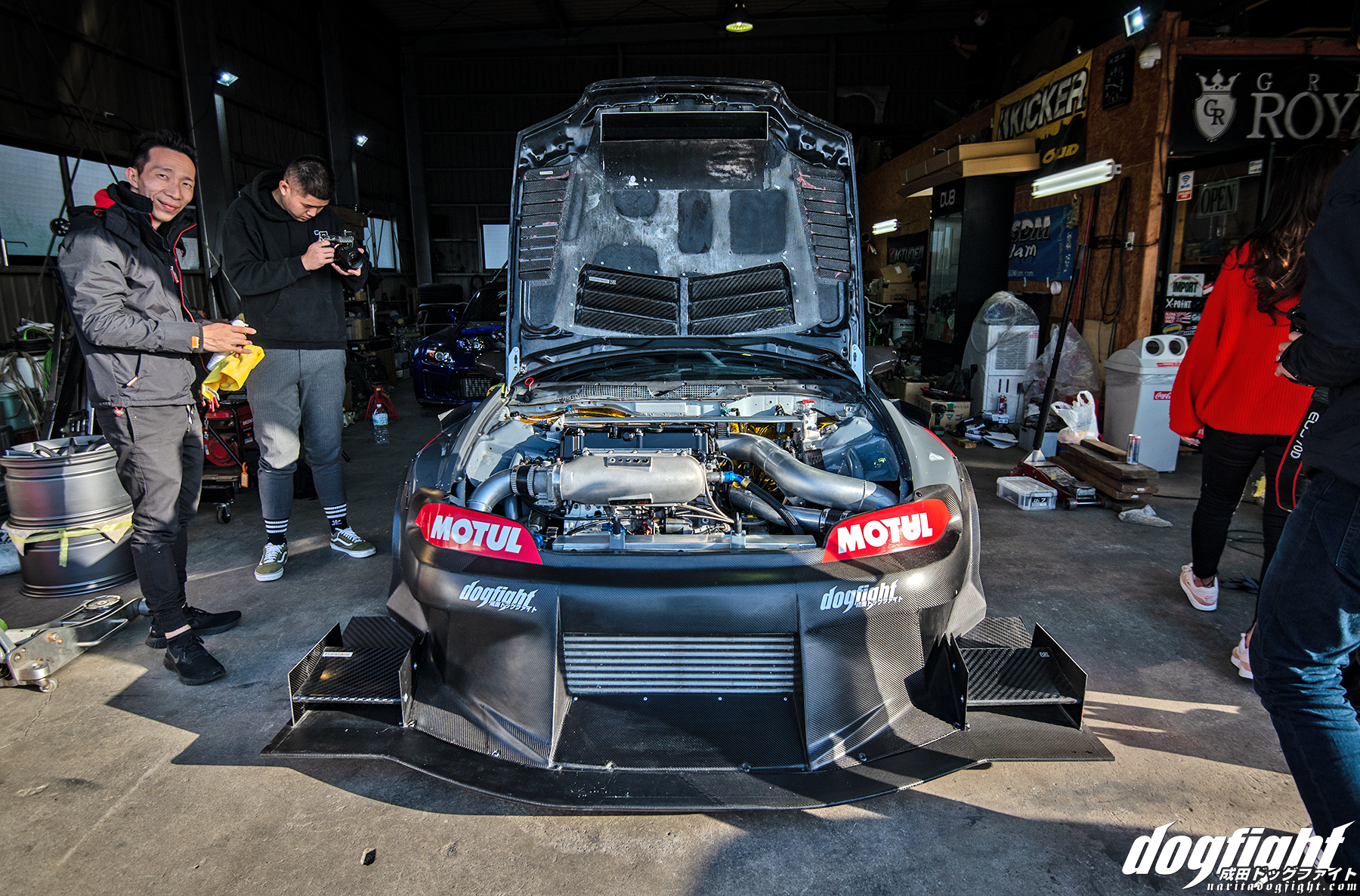 Although the most noticeable change is to the bumper, and the addition of a much larger splitter and extended end plates, it wasn’t just the front end that received a new treatment of carbon. 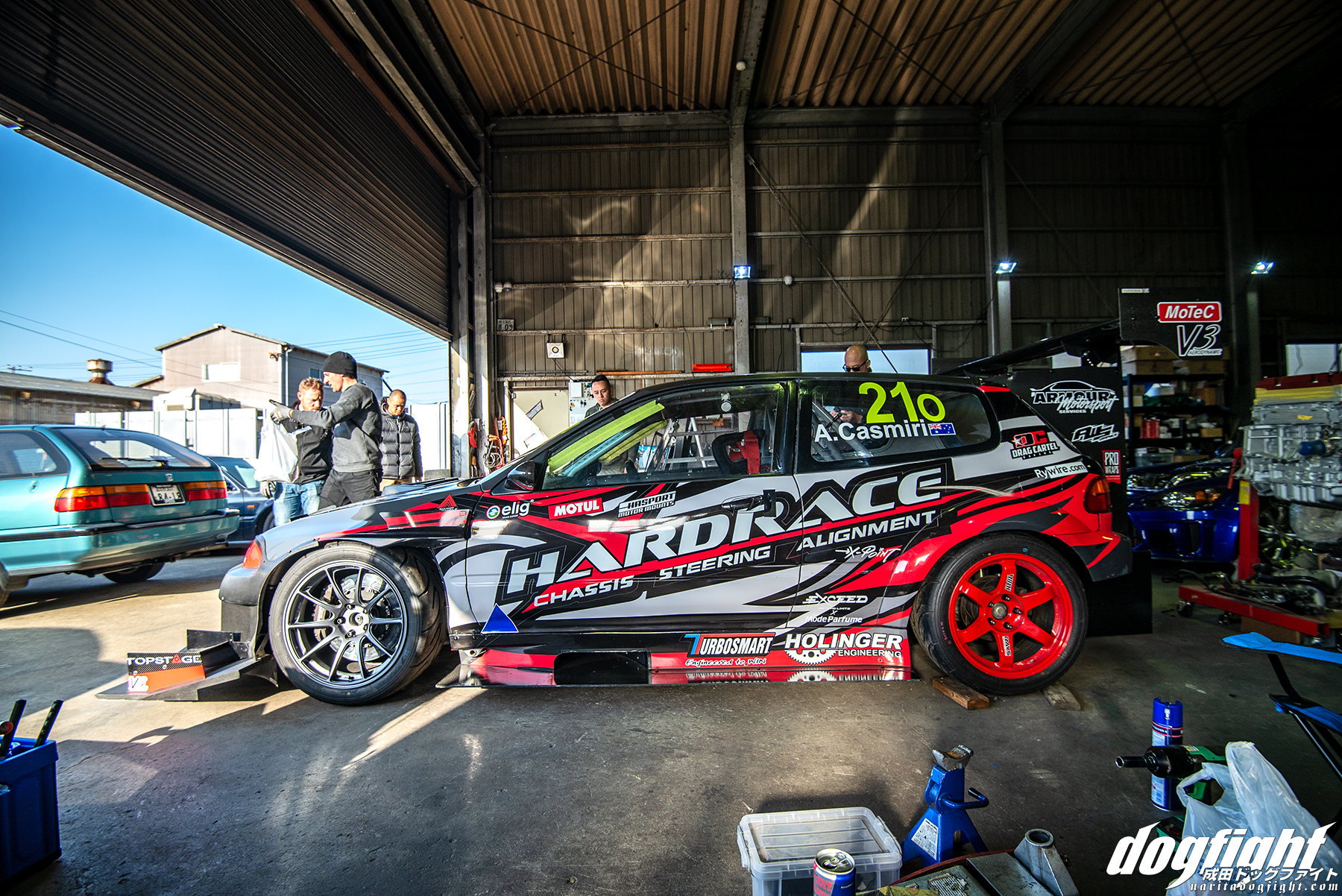 The car’s undertray had been completely redesigned by the Melbourne based Top Stage Composites.  The carbon undertray which now featured integrated ducting was the natural step in the teams hunt for further downforce. 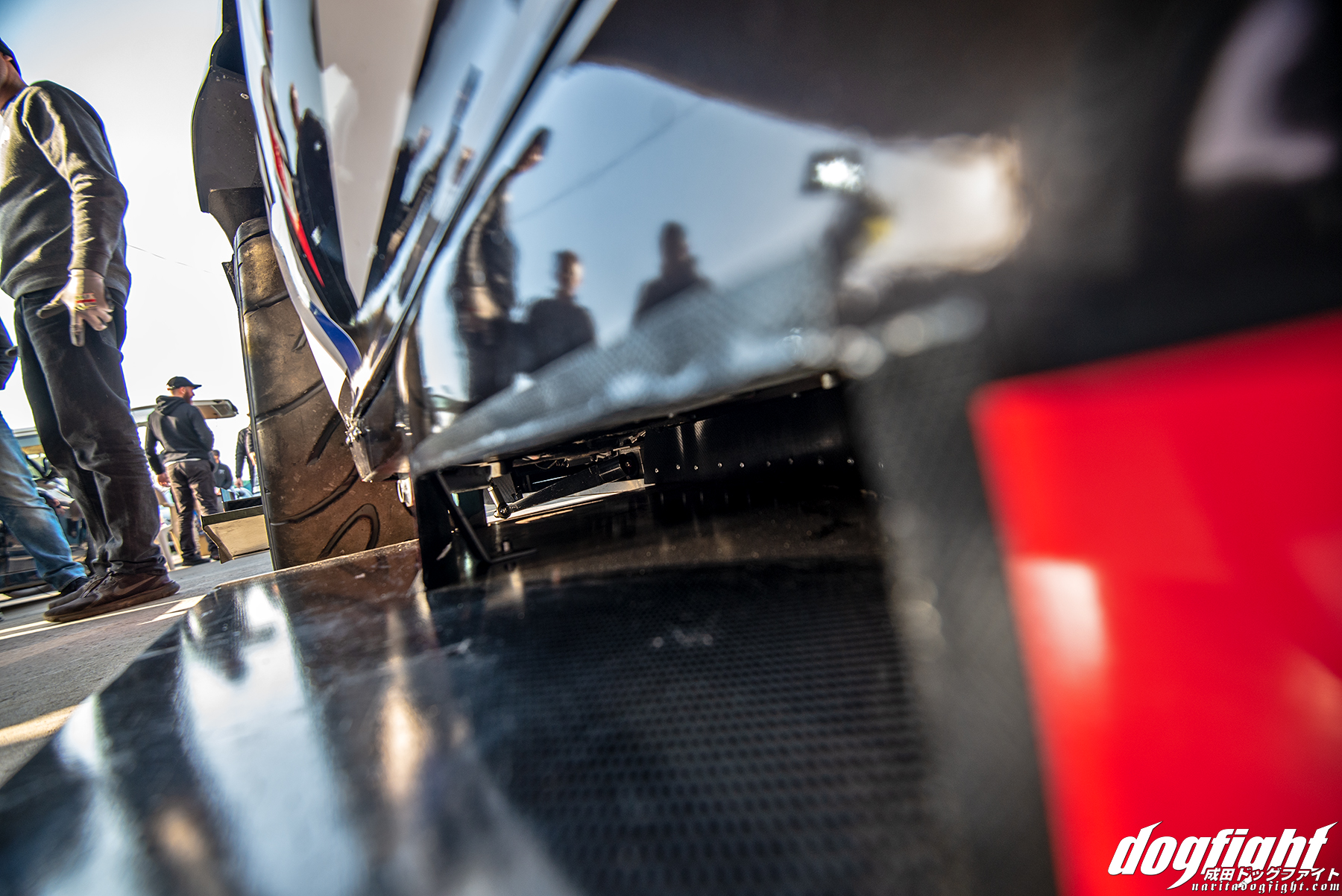 A look through the cutout in the side skirt. 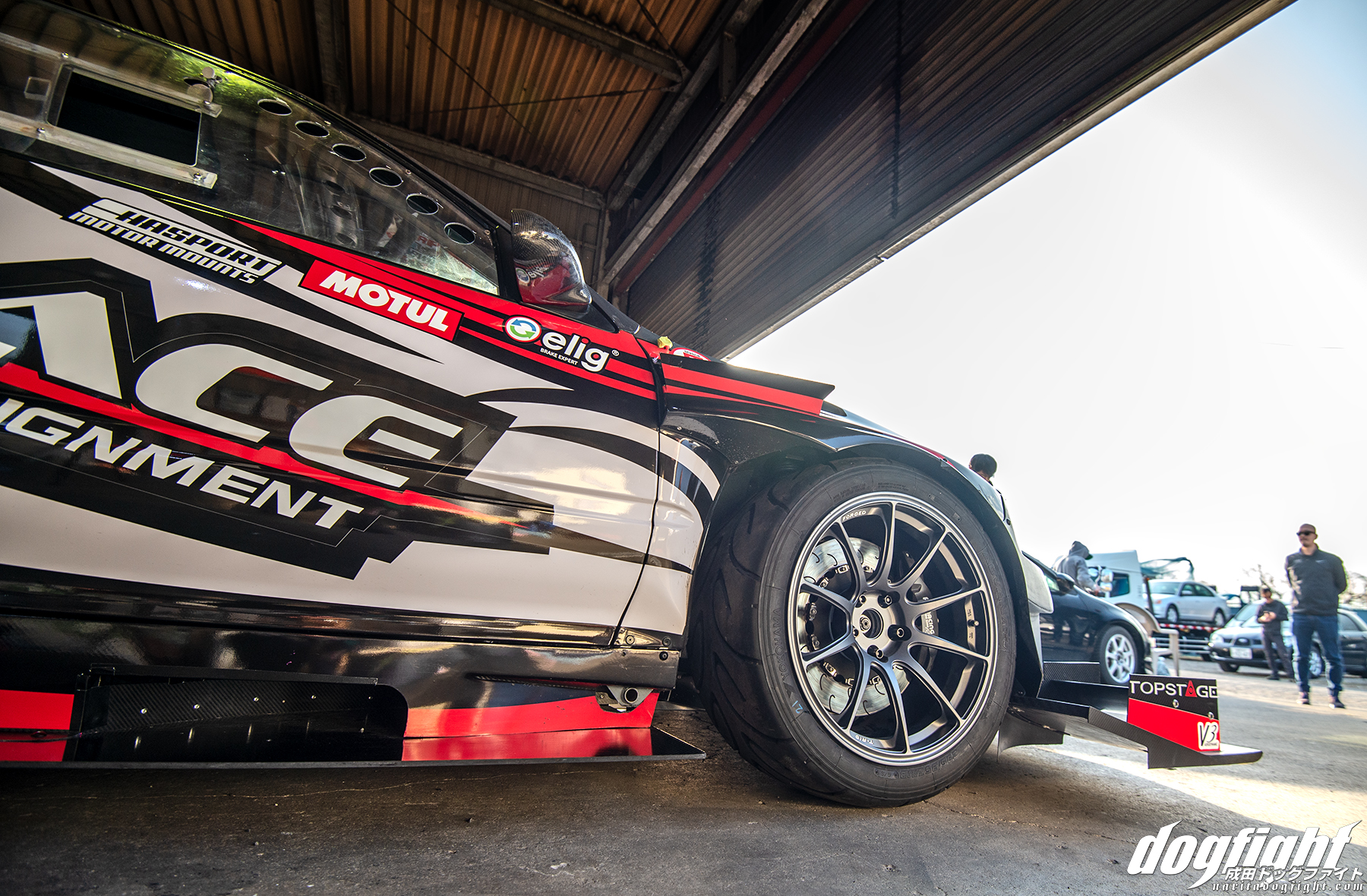 Titan 7 T-R10 wheels were fitted to the front with the help of some spacers.  These were a borrowed wheel setup that the team used during the event as they didn’t have much room to bring their usual spare lineup.  The 295/35/18 Advan A050 was the natural choice of tire for the team; they’re accustomed to using it back at home, and it is the accepted tire for the Attack series. 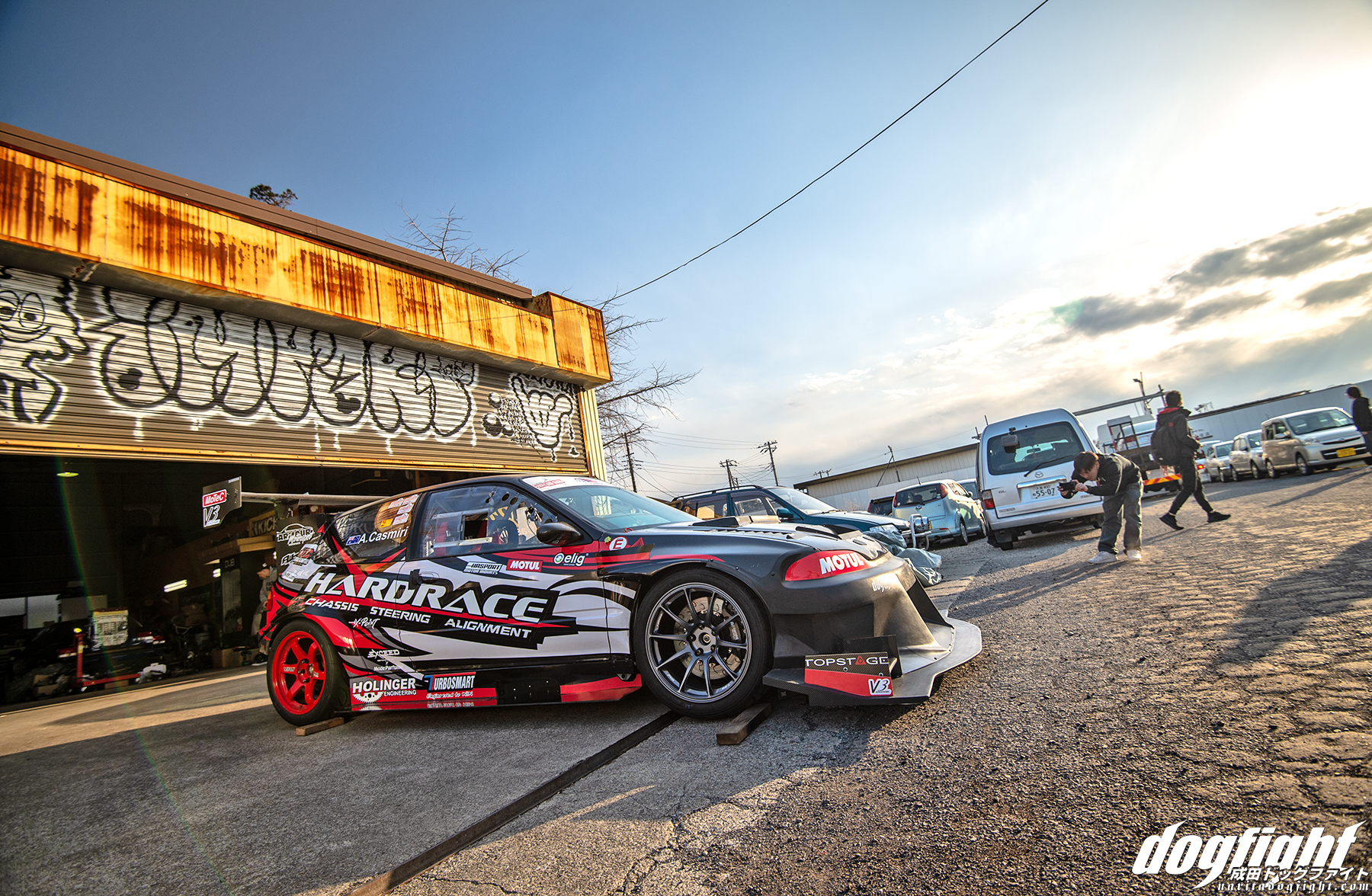 The new front end and undertray tie into the newly crafted, and noteably larger, rear diffuser. 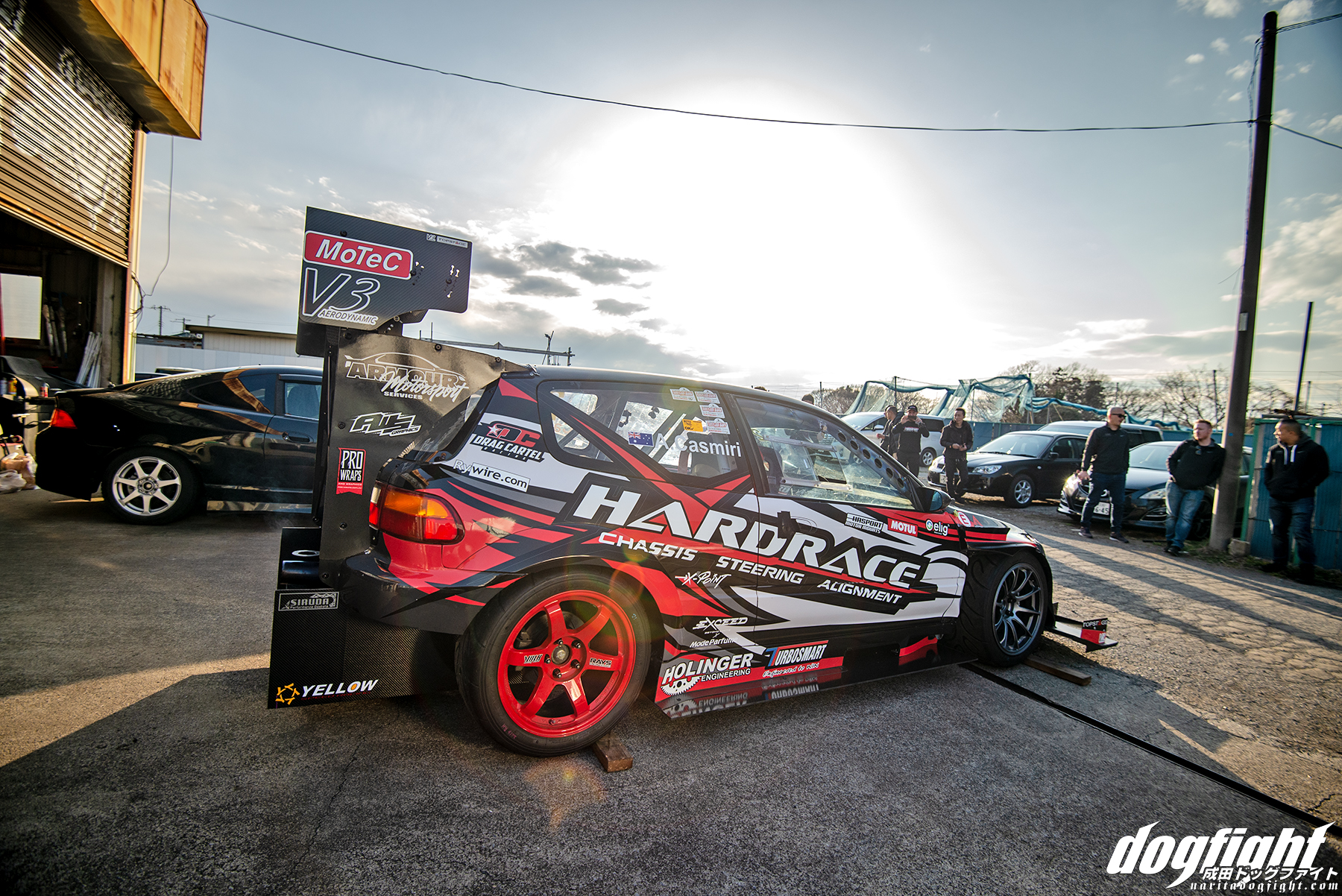 The entire package is one worthy of another win at WTAC, and as we’d later find out, records at Tsukuba; if only they had time to test it before bringing the car to Japan.  The car was driven only once at their test track of Wakefield after installing the new package.  The car hit an astonishing 251kph, proving it was stable at speed, but unfortunately the little testing they did provided no evidence of how the car would handle at Tsukuba.  As you’ll see, the team had a hell of a weekend ahead of them… 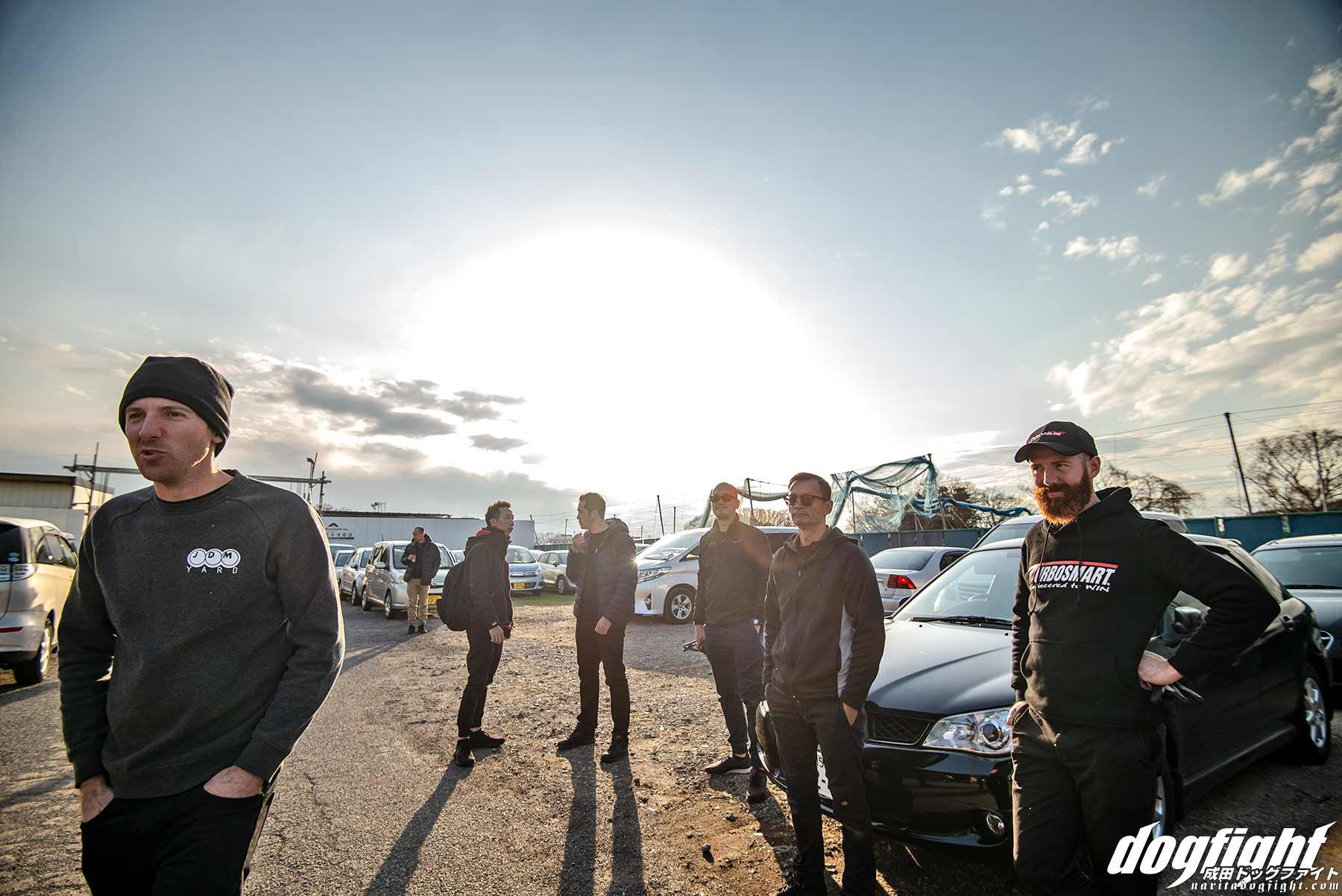 I went to take a photo of all the Yard guys lined up in front of the car waiting to be loaded, with the sun setting in the background, but literally as I was composing the shot Adam decided to walk away.  This is a photo of Adam actually saying, “…messed up your album cover shot, mate.” or something along those lines.  So I’m posting it anyway. 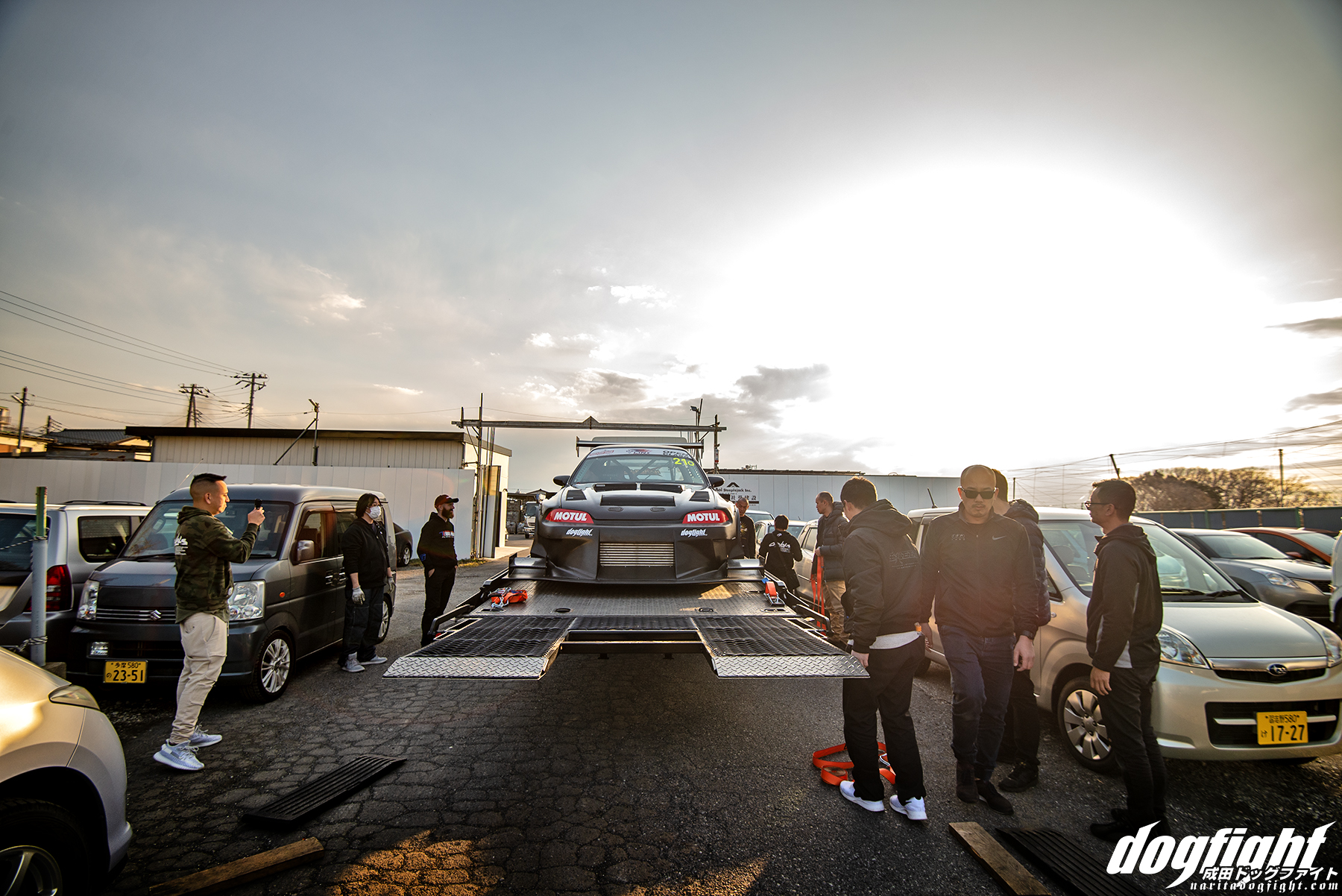 There was a lot of international support on hand, and it made me happy to see how much Attack has been growing over the decade. 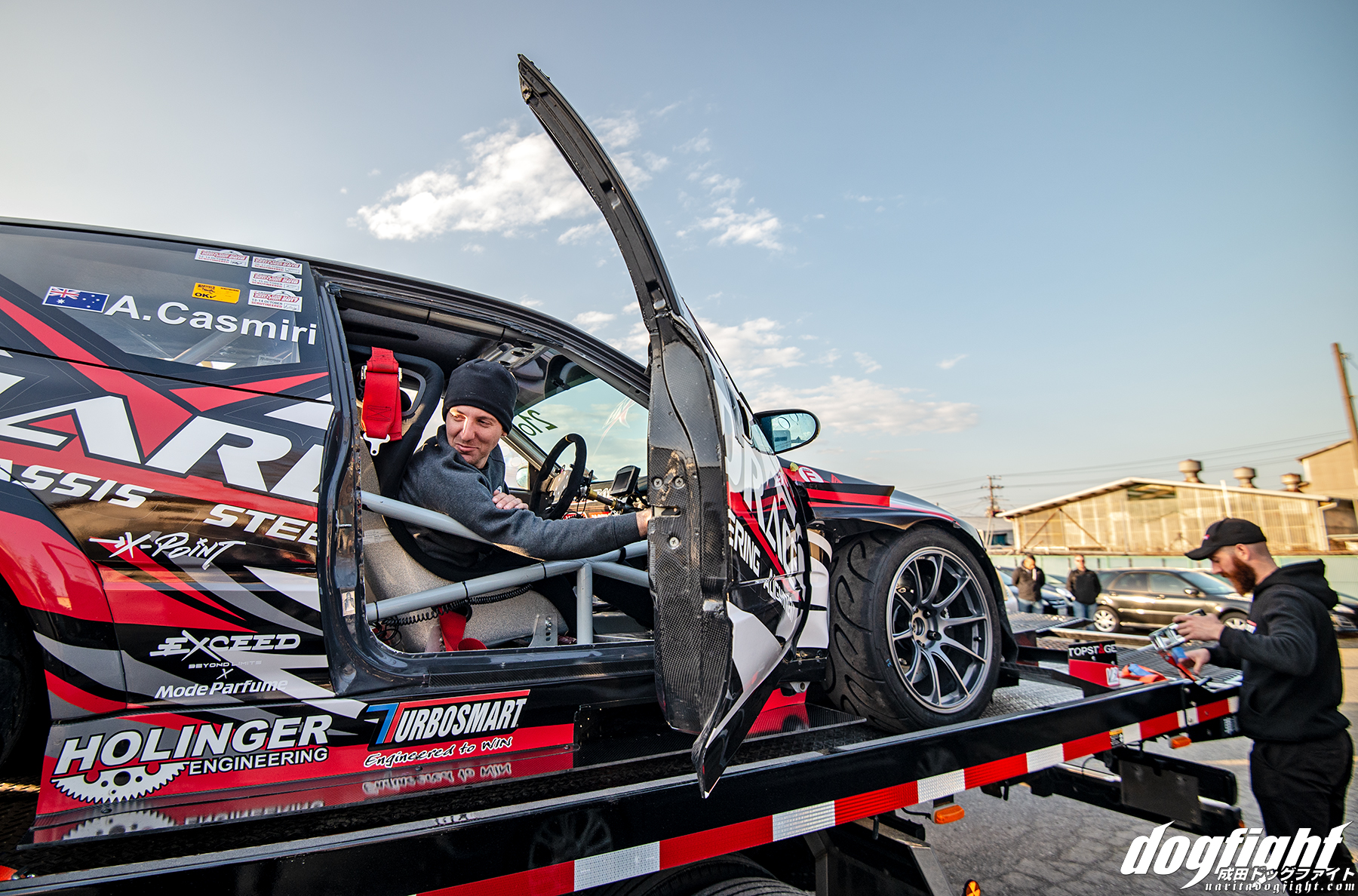 All smiles for race day. 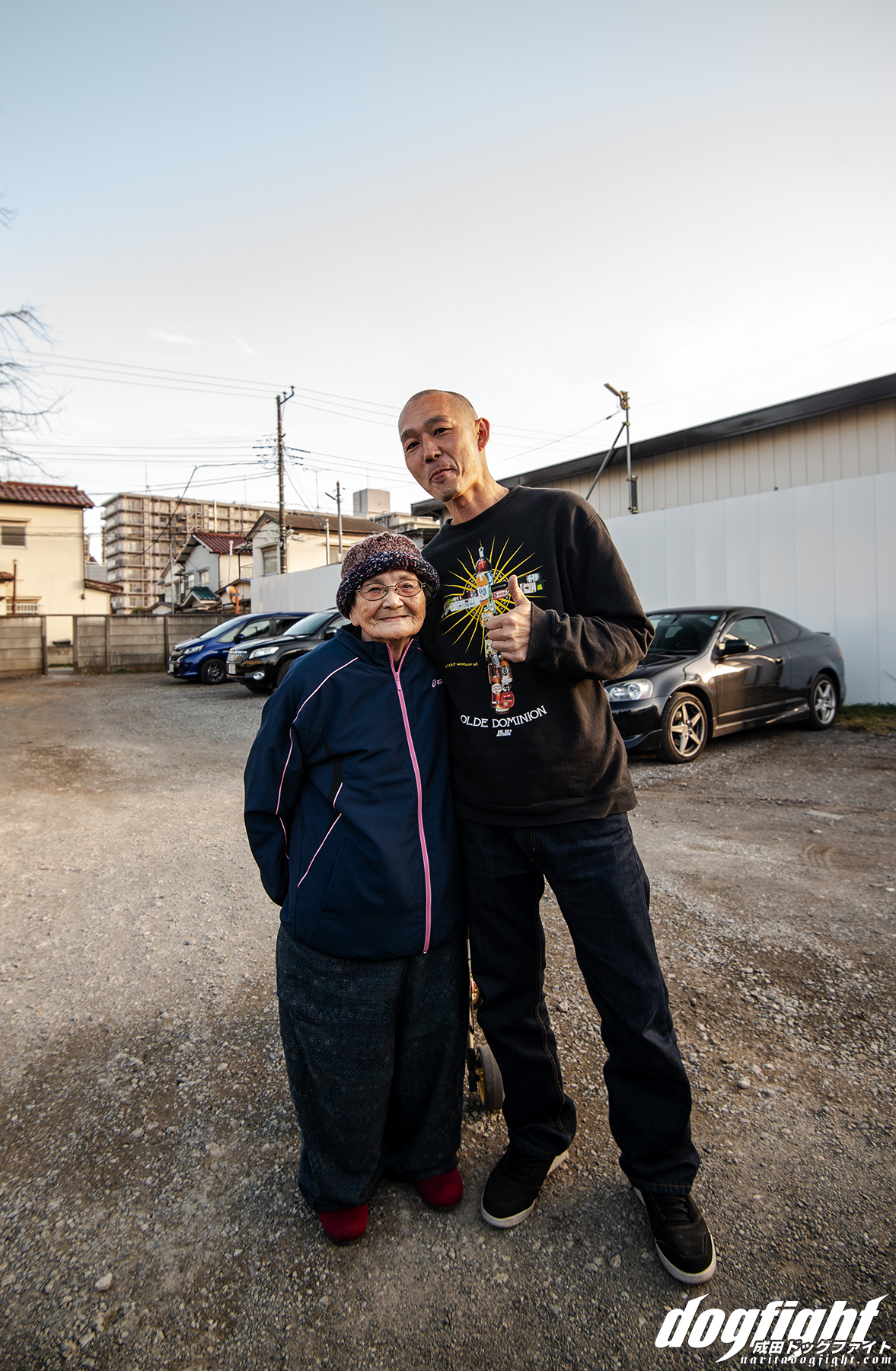 This is Masa’s neighbor, although I can’t recall her name, she was the sweetest old lady.  We chatted for a bit, I told her that Aaron’s favorite food was McDonalds, and she wished us all the best.  She was probably wondering why in the hell there were all these Westerners in her backyard.

The car and flatbed were parked for the night and we all headed off to our respective homes to try and get some sleep before the event in the morning.

In natural fashion, I arrived to the track late, having forgotten my camera case, backpack and wallet on the street in front of the house in Yokohama after driving for 25 minutes.  Turning around to go get them (they were still there untouched, of course, it’s Japan) meant I would lose at least an hour, and with it being a weekday, put me right in the middle of rush hour traffic.  I scooped up David from BattleDriven who was staying in Tokyo, grabbed some coffee, and set out for Ibaraki. 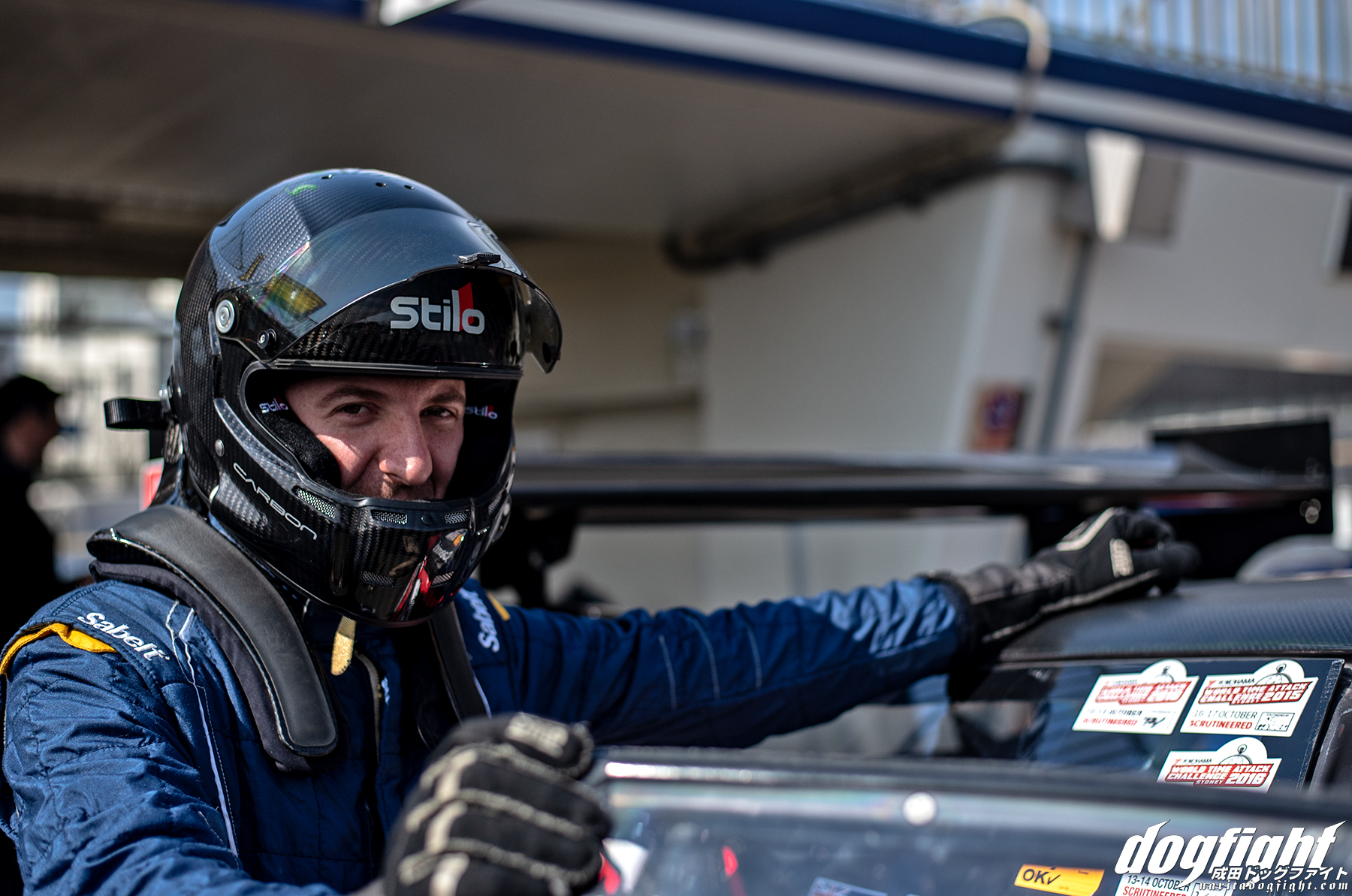 The excitement of what was happening came quickly, and although it was just a test day, times naturally counted in the official sense, so everyone was wearing their game face from the moment they arrived.  Adam suited up for his first drive on Japanese soil. 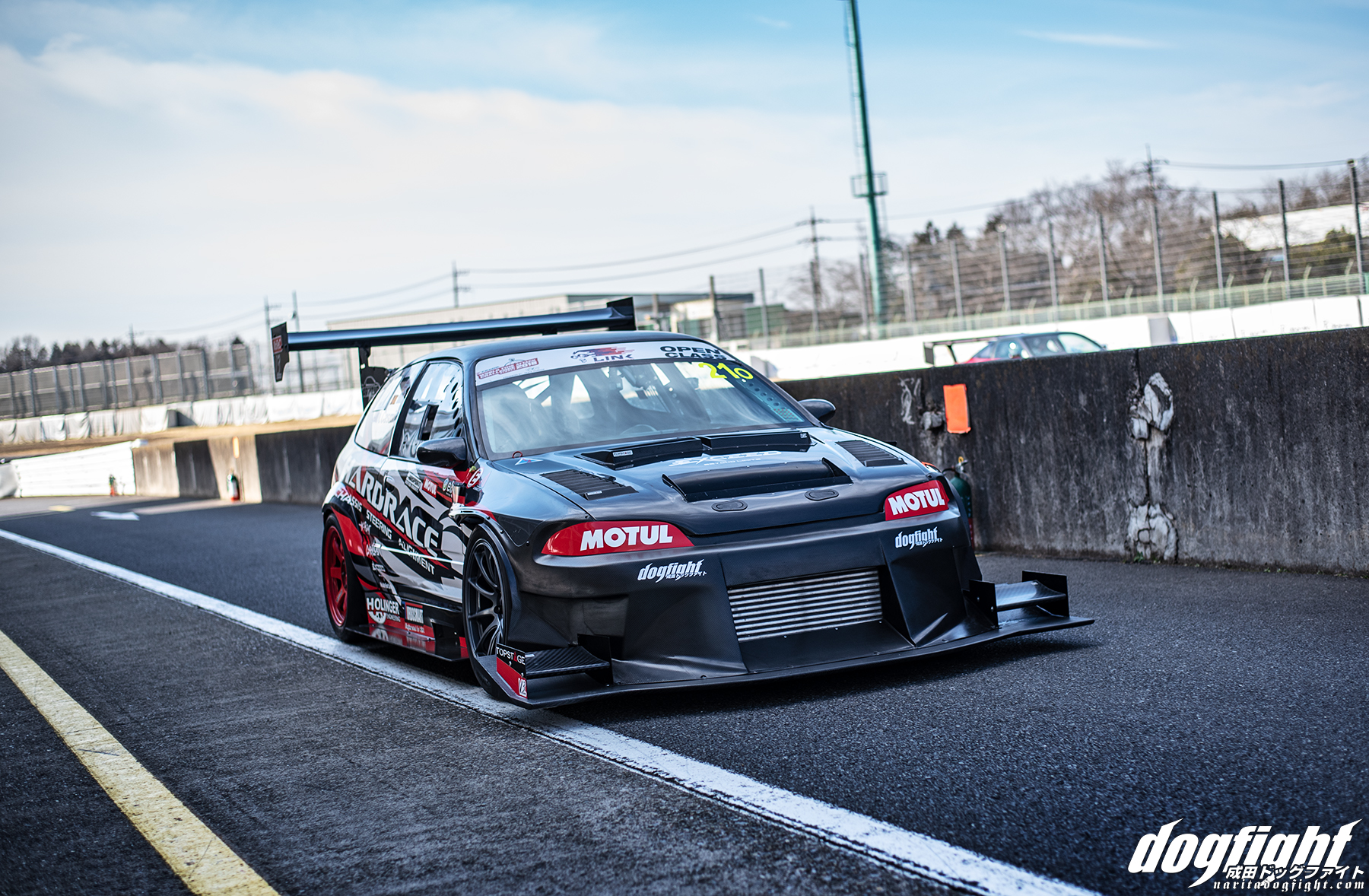 It was very surreal for me to see this car at Tsukuba.  Not only because it wasn’t a Japanese build, but having spent the entirety of my time in Australia with the guys from JDM Yard I’d really bought into their mission.  These guys are in it for the right reasons, and it shows through both their attitudes and their work.

They say that a man defines himself on what he’s willing to fight for; there is no doubt that this camp fights to win.  There is no giving up or settling. 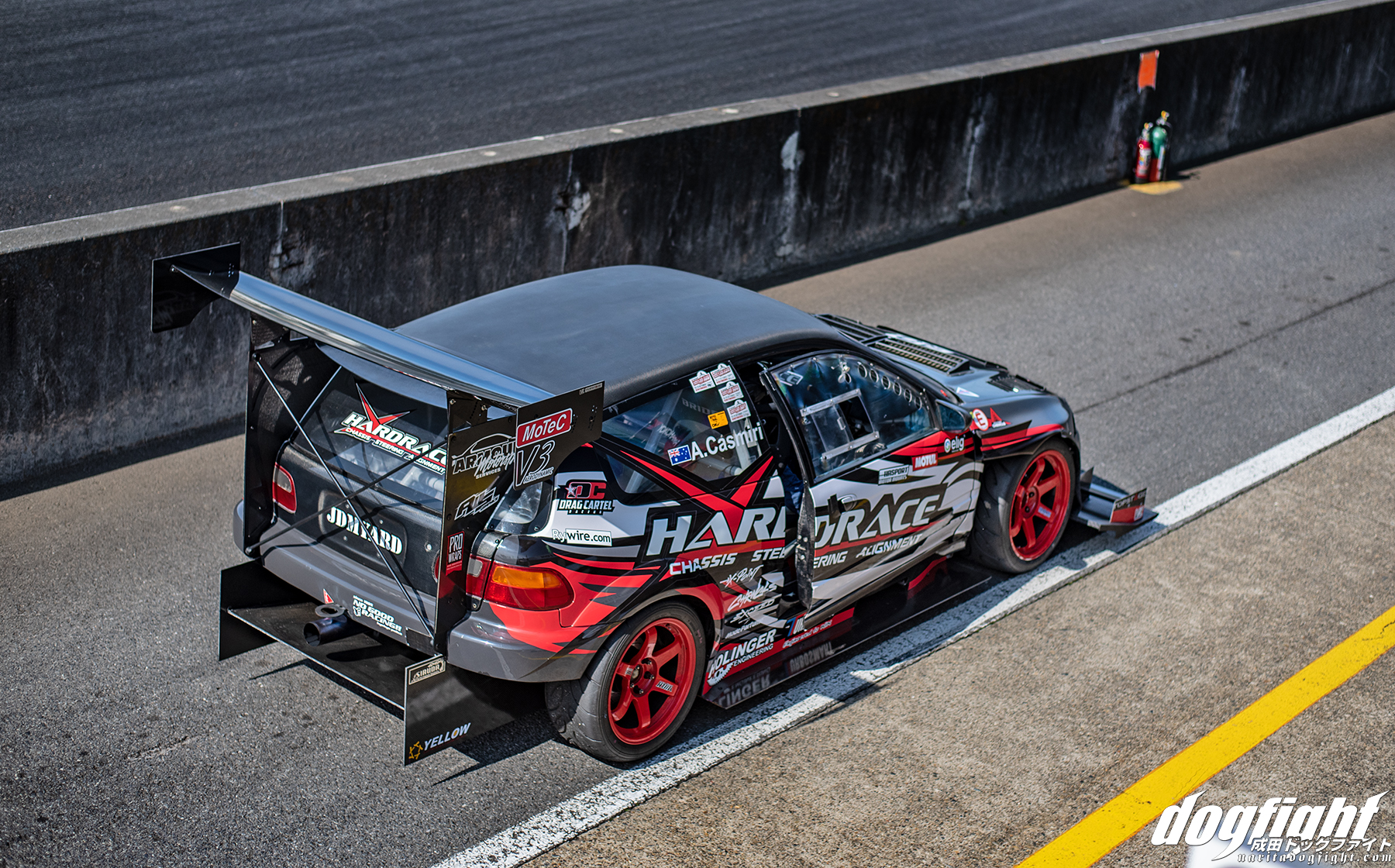 Anticipation building in the hot pit. 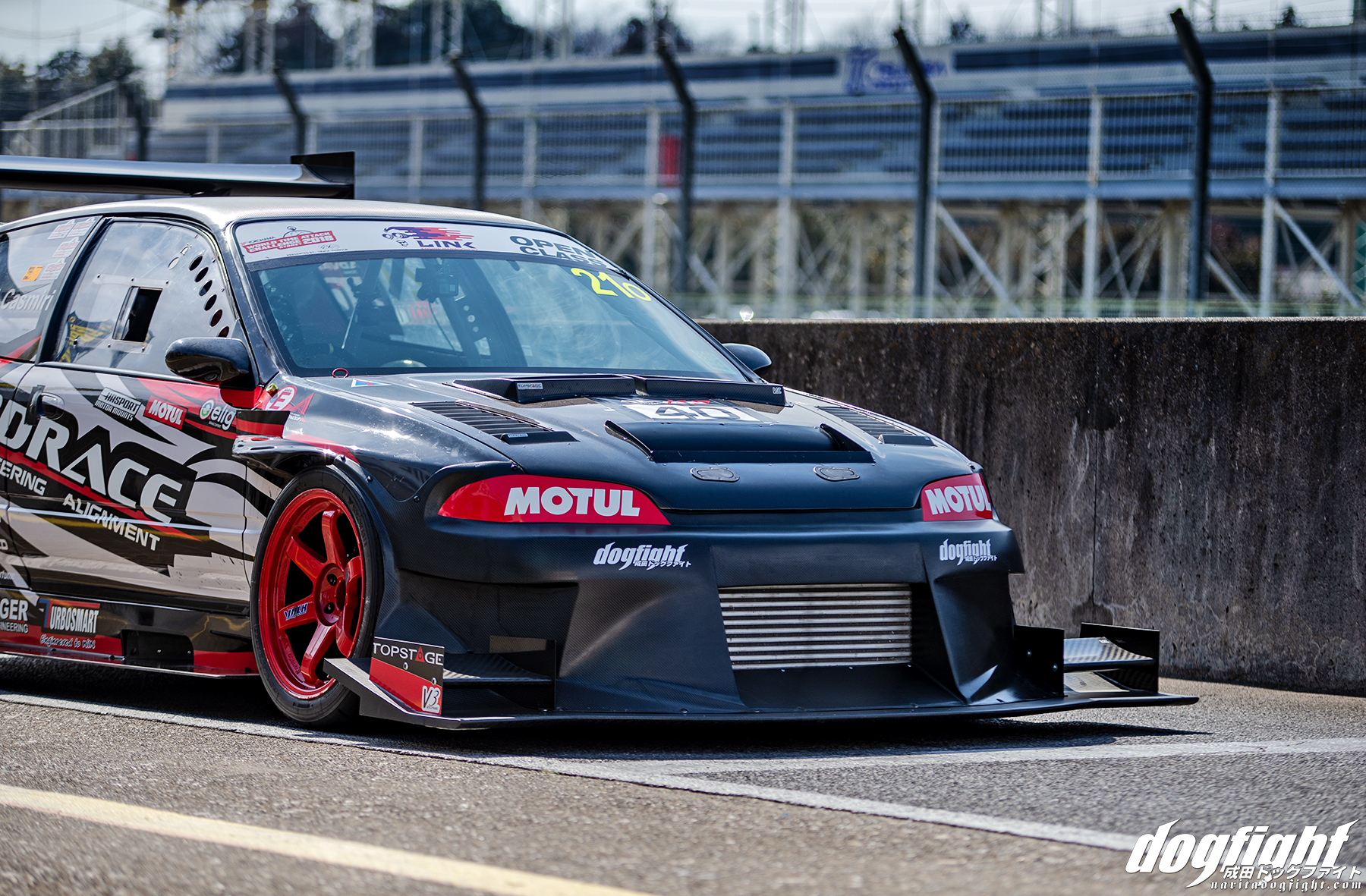 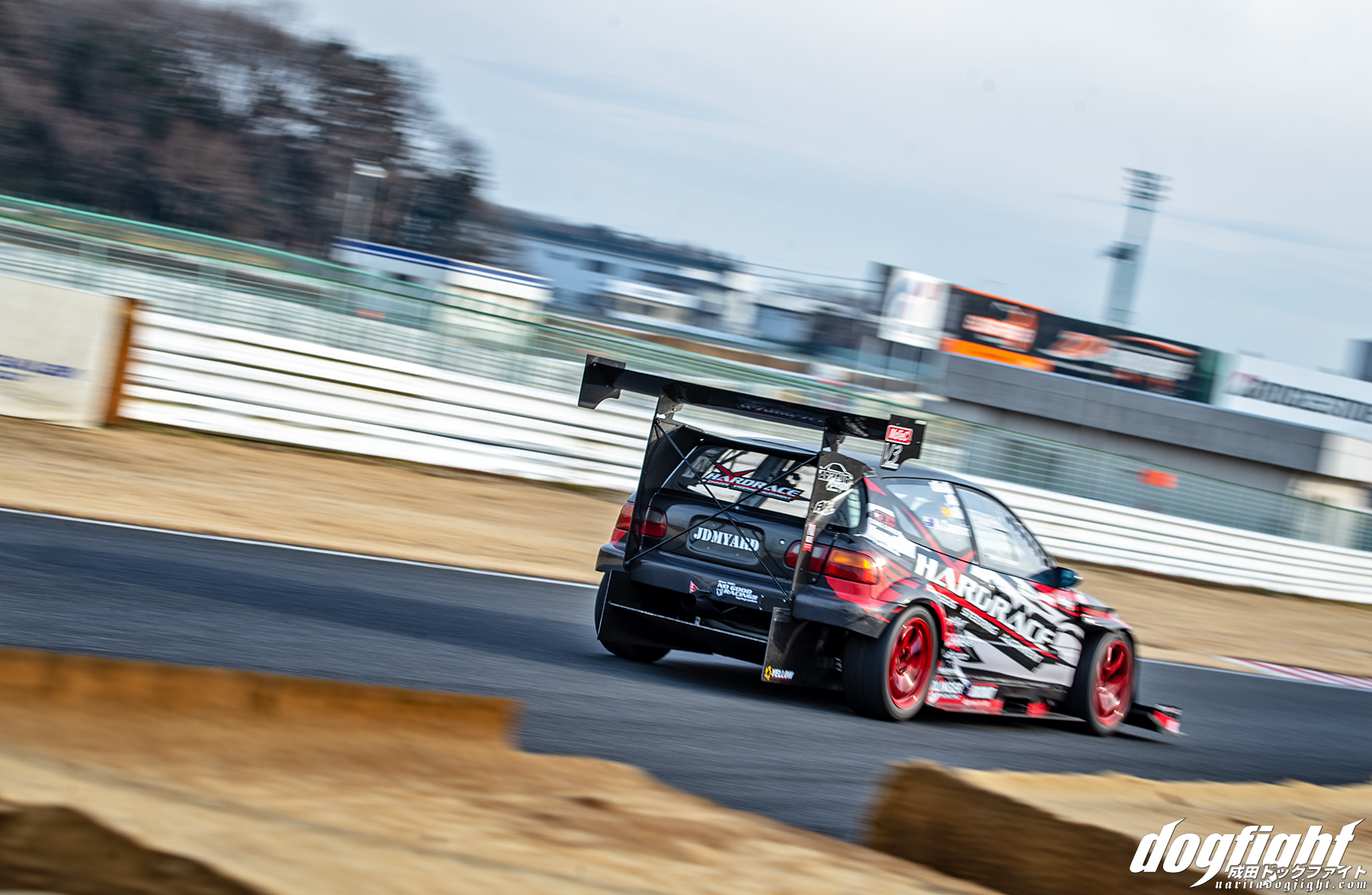 It didn’t take long for Adam to discover the car was extremely difficult to drive.  The aero balance was very front biased, and the springs were much too soft for the smooth asphalt of Tsukuba.  With Sydney tracks being much more rough and bumby, the team typically runs a softer spring to help cope with the surface descrepencies.  However the spring rates had an adverse effect in Japan with the rear of the car lifting almost completely off the ground under heavy braking, making the car near undriveable.

The team did their best to try and compensate on the fly by dialing in more rear wing, and installing stiffer springs (however they ran out of extra sets before they found the ideal rate).  Zi, one of the owners and mechanics of JDM Yard, infered that they would probably have to bump up to at least a 32k front spring. 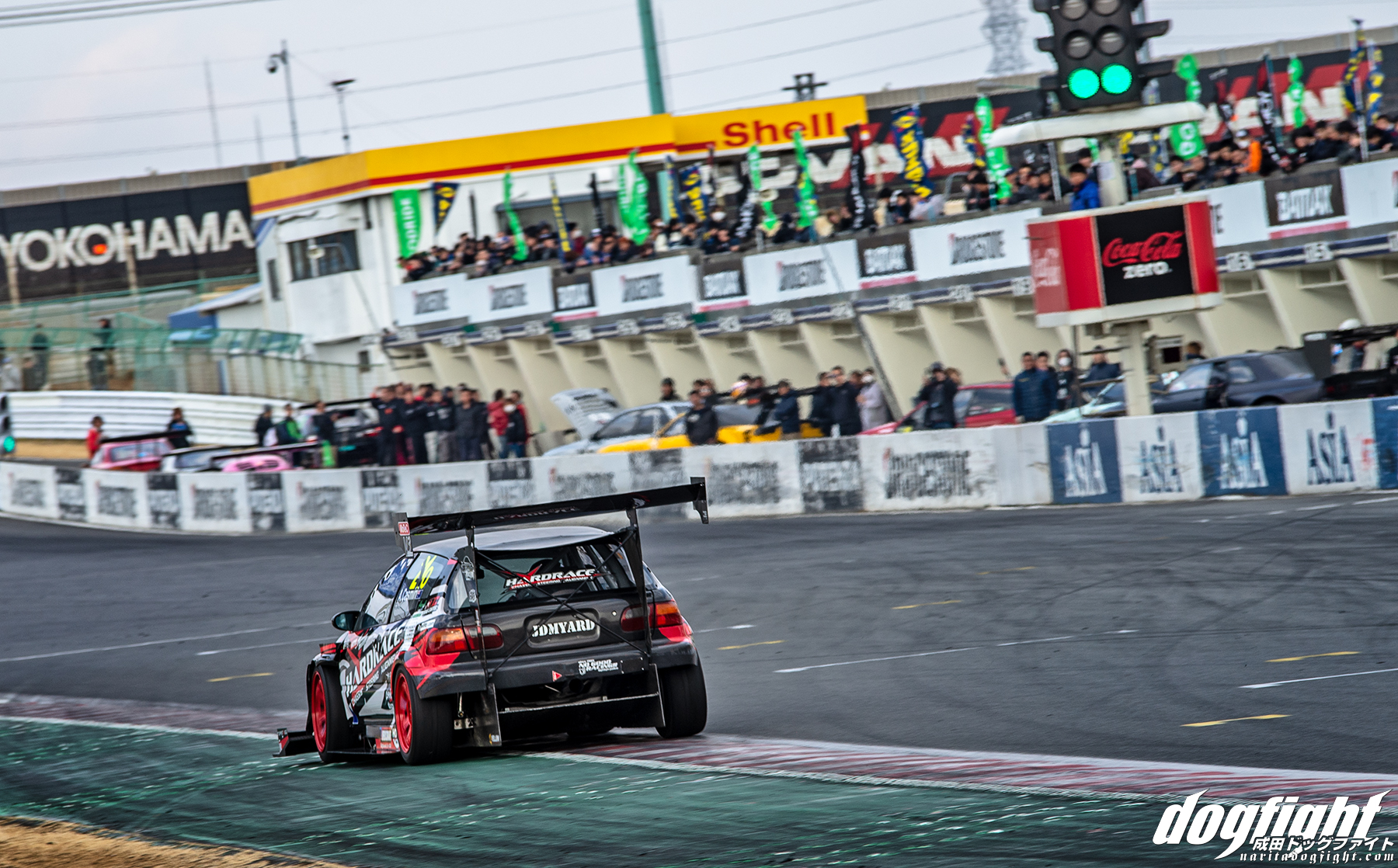 Having watched their fastest lap of the day, and reviewing the data that Zi had showed me, it’s easy to see where they were losing time.  I had even mentioned to him at the end of the first day that, from where I was shooting on turn 1, I could visually tell that Adam’s cornering speed was significantly slower than the rest of the pack.  You can see the rear end wanting to swing out under any braking at all.  It was a bit scary to watch. 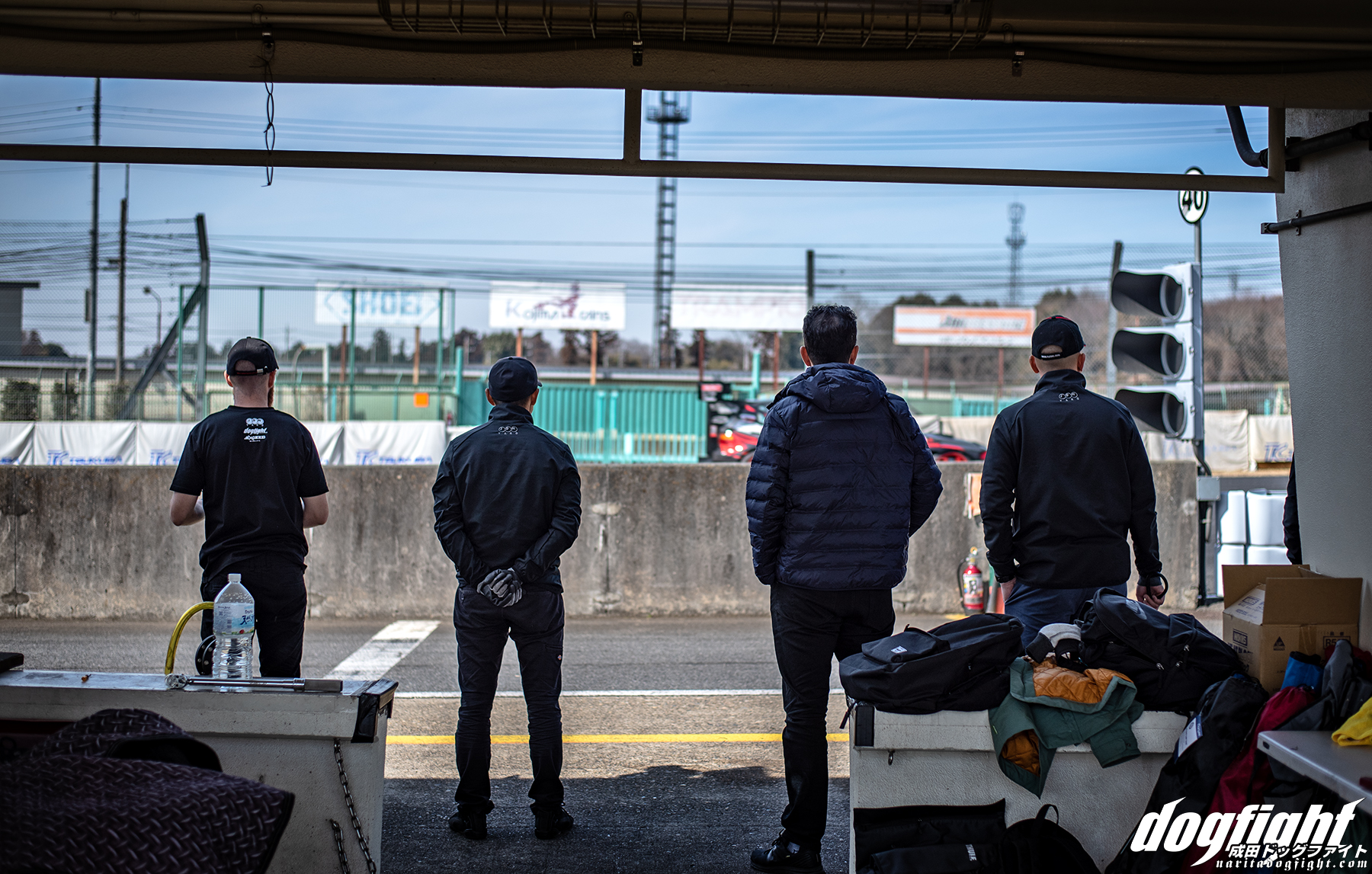 The team watching on as Adam crosses the line.  Not fully knowing what they’d be going through the next two days. 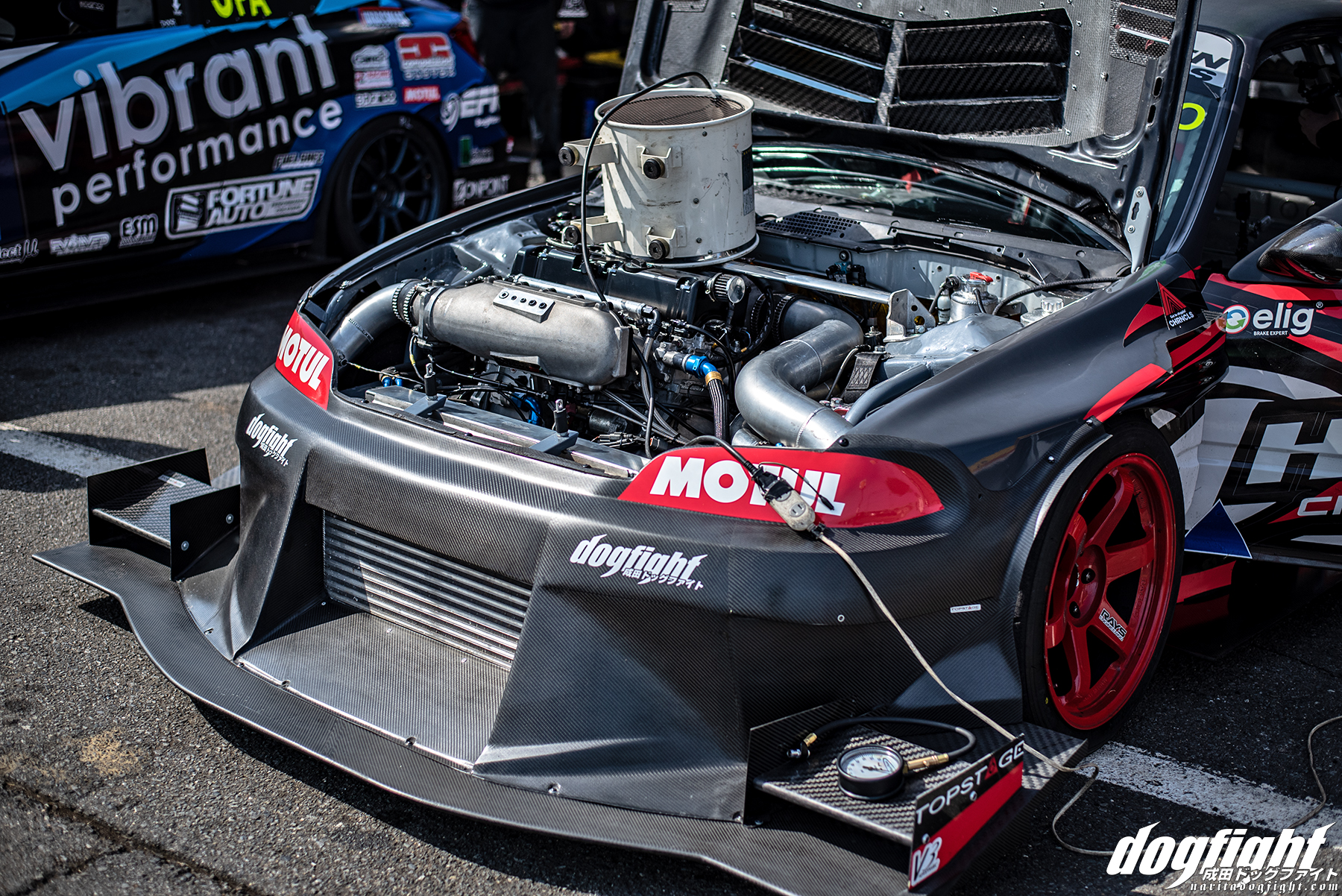 It wasn’t long into their first stint that the headgasket of the nearly 1,000hp K24 gave out.  The crew, with the help of Armour Motorsports, have tuned this powerhouse to be as reliable as possible, but as we all know things happen in racing.  They had still been running it on low boost, and had yet to unleash the car at 2.2 bar; to which they were now even more hesitant to do.  Coupled with the shifty rear end, there was really no need to dial in more power.  In fact, if Zi could, he noted that dropping the power output may have helped a bit. 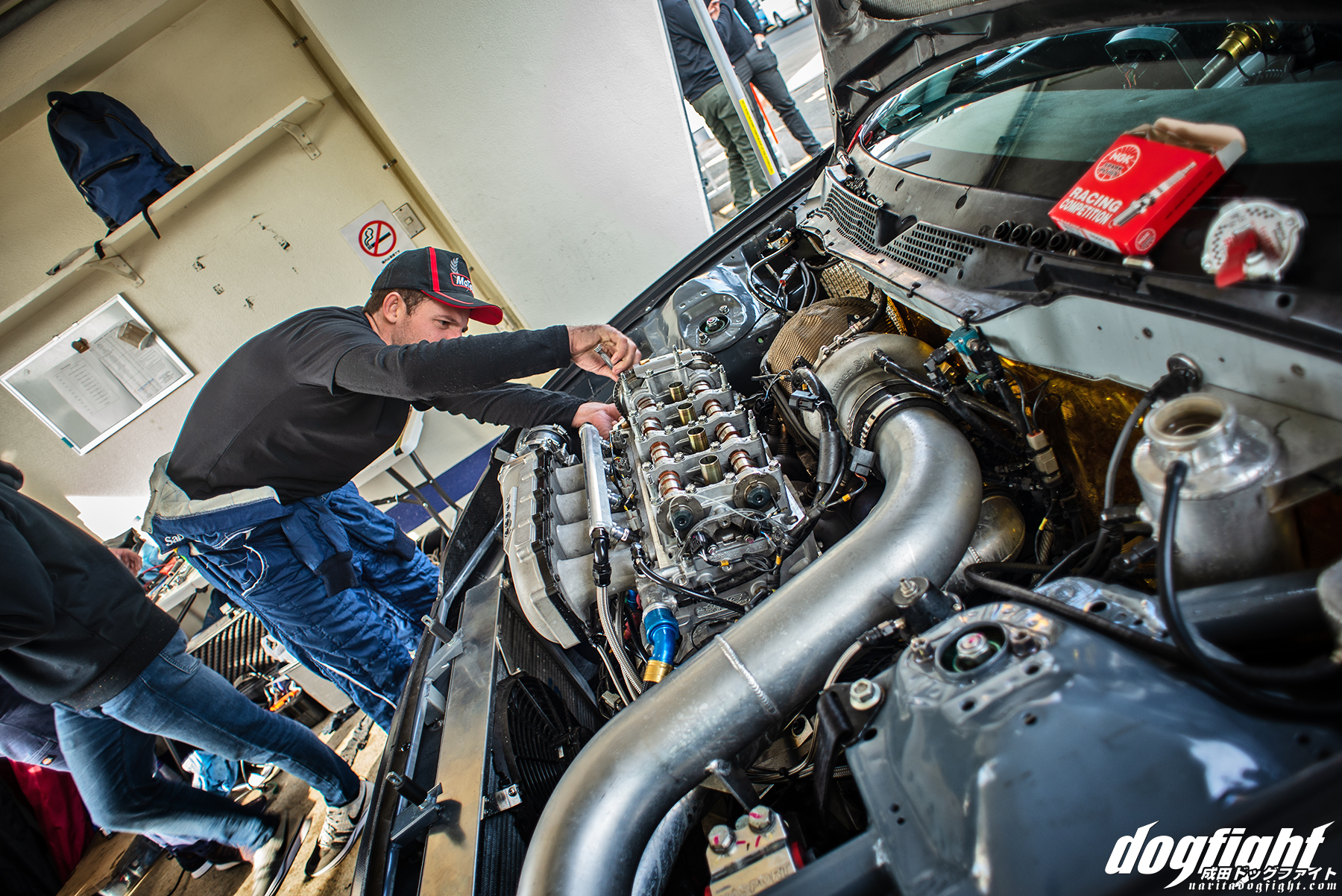 Adam, Aaron, Zi, and Kit would eventually end up having to change the headgasket a second time during the competition on Saturday; something Zi jokingly says they do quite often (more in a preventative fashion than necessity). 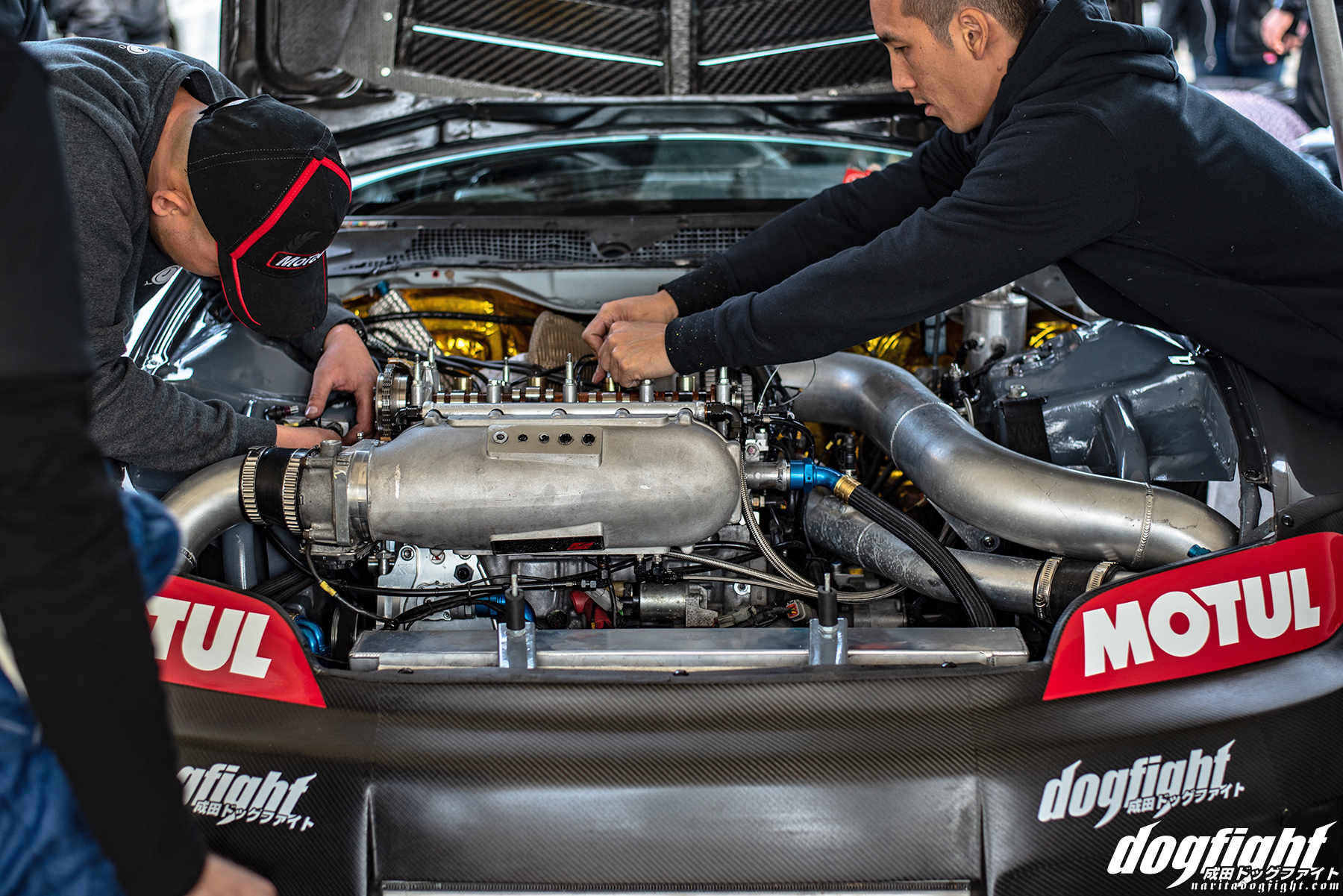 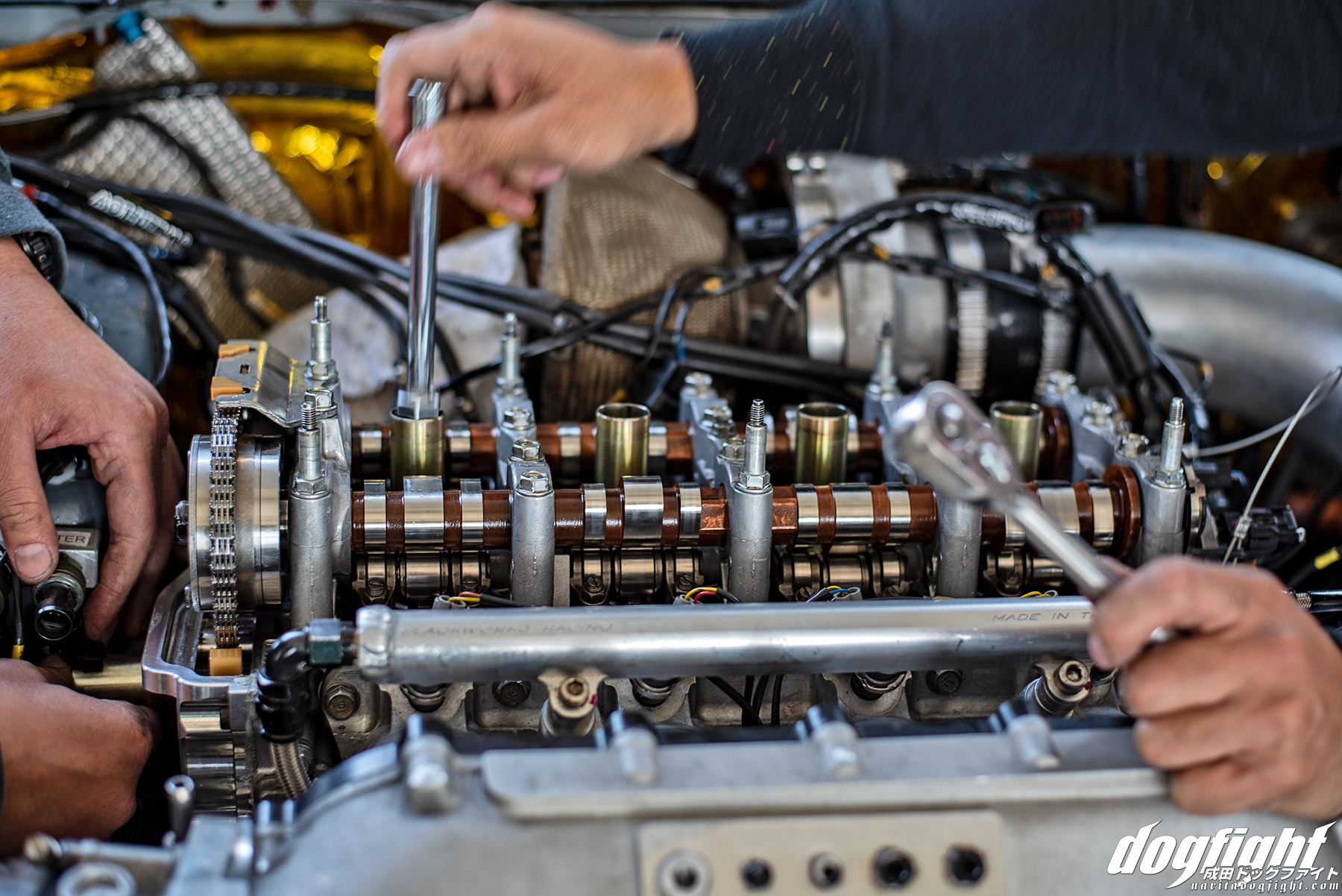 It was impressive watching how quickly they completed the rather ardious task; they definitely know the motor like the back of their hands. 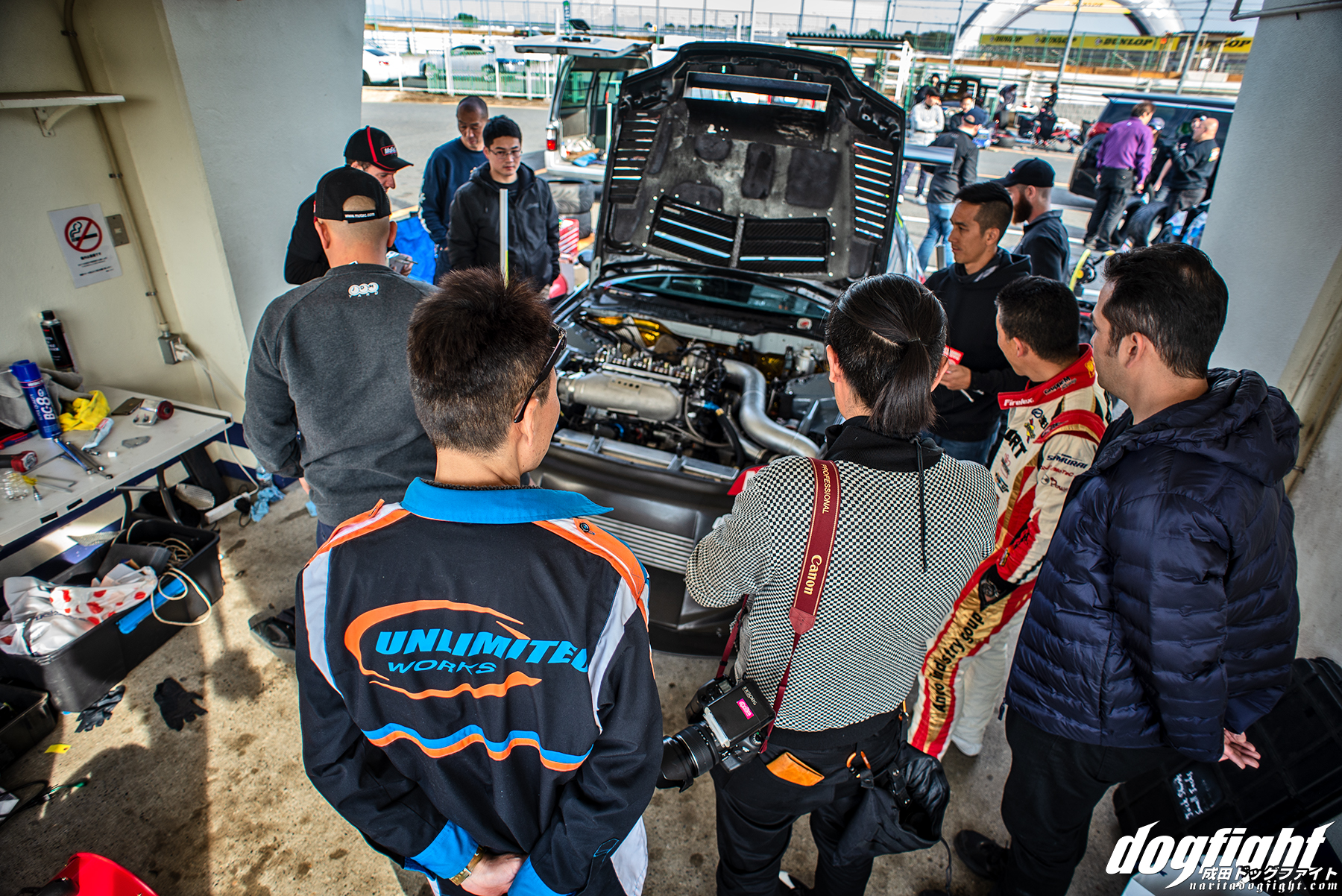 The foreign cars drew quite a crowd on Saturday, with the Japanese competitors coming to get a close look at their setups.  Here, Sato from Unlimited Works, and ‘Fire’ Ando from Team Escort watch as the team swaps headgaskets.

It was a rough weekend for the team, no doubt, but one that encompassed the very spirit of racing.  The highs and lows, the comradery and celebration of acheiving something very few can say they’ve done. 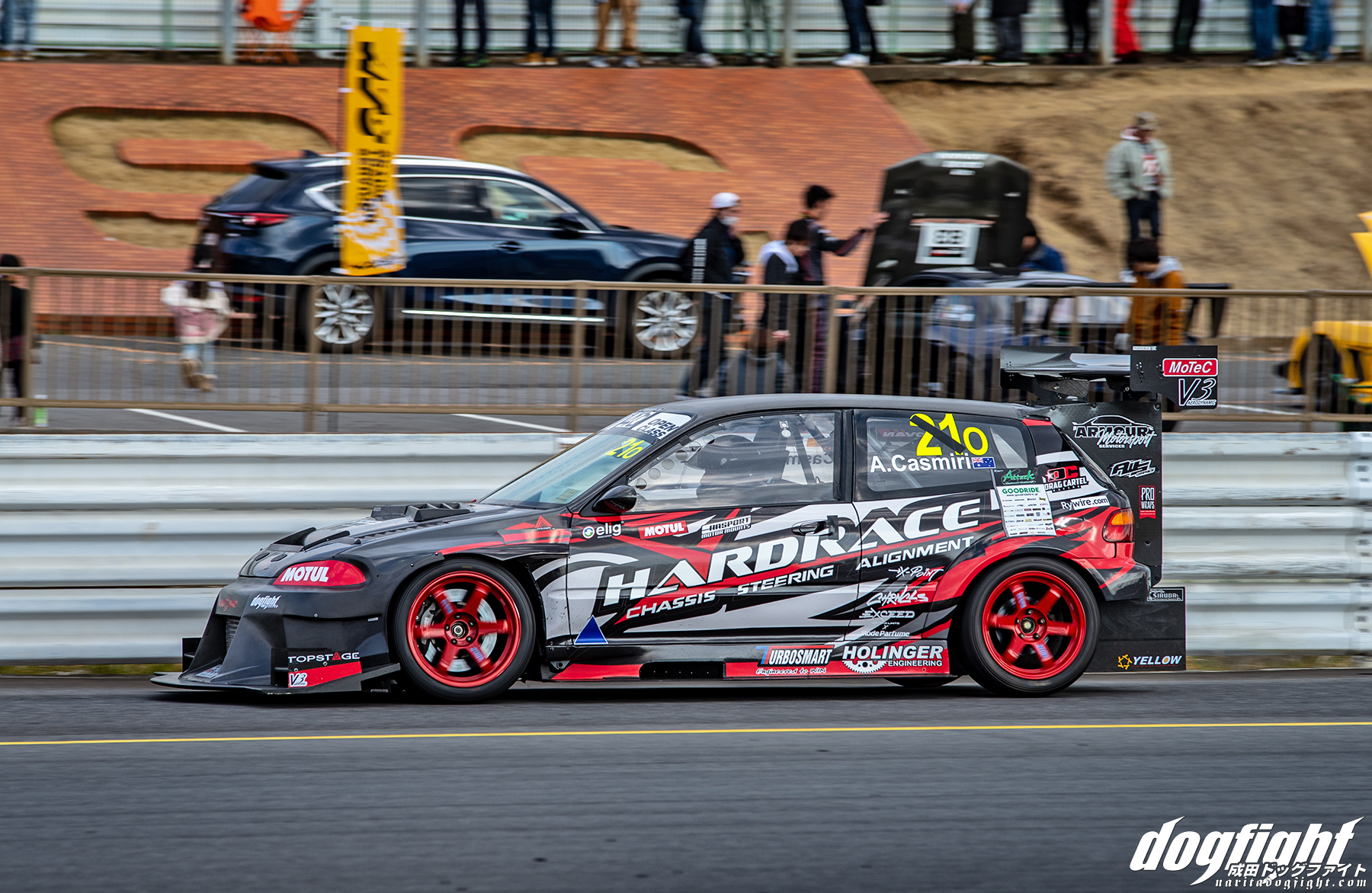 Thanks to Adam’s very clever driving, and the teams insistence on keeping the car on track, they were able to walk away with a best time of 54.901 on Attack day; enough to beat the HKS FF record, but not quite enough to be competitive with the time that Will had posted in the Vibrant Civic. 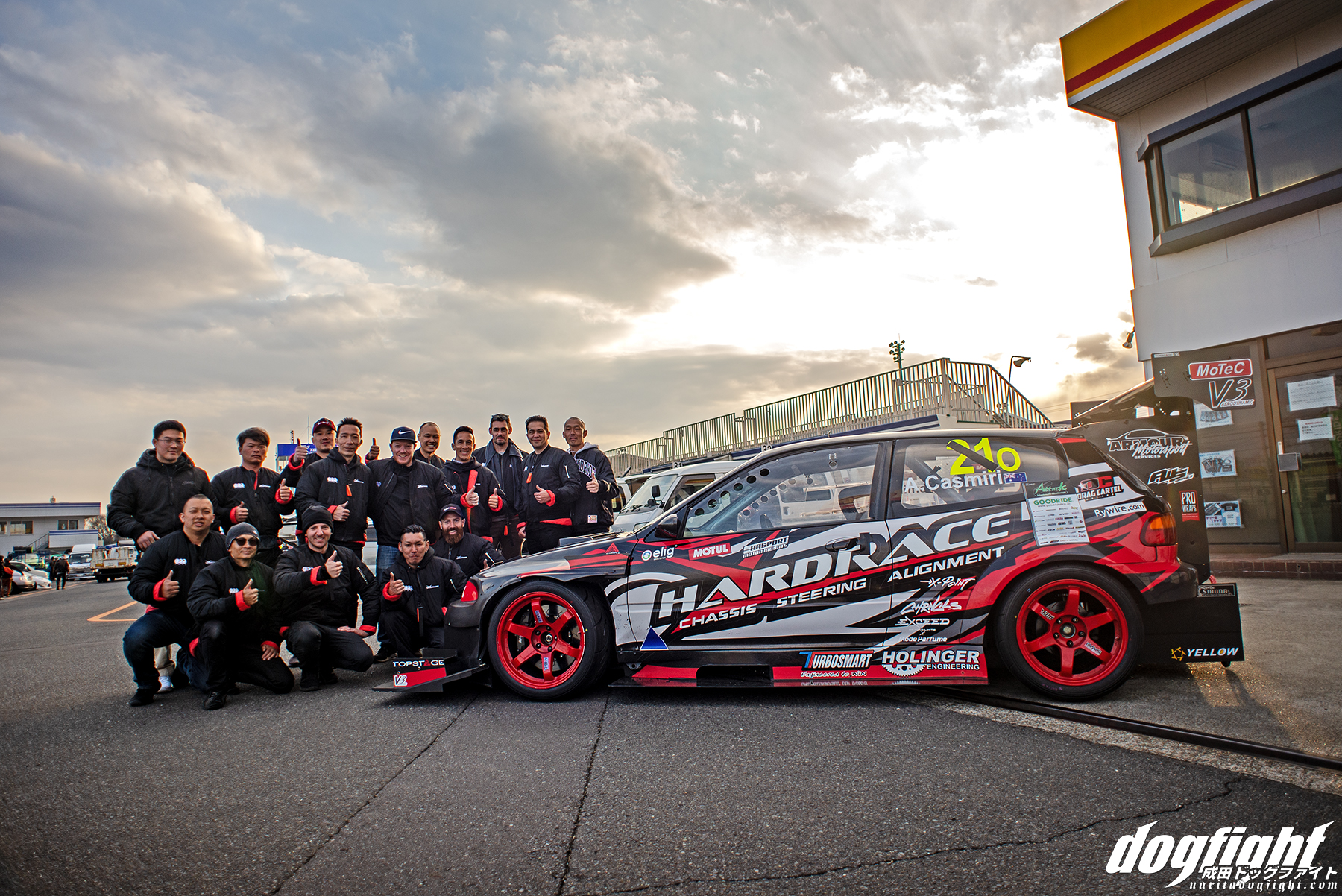 Just a few days after the event, the car was taken back to the Yokohama port and loaded on to a boat headed for Taiwan.  Hardrace has the car for a stint at some promotional events in Asia during the next coming weeks.  However, in our conversations, Zi has expressed his desire to bring the car back to Japan for another go at Tsukuba.  Not satisfied with how the car performed, and having their hands tied in terms of modifying it on race day left him wondering what could have been.  If the car does make it’s way back to Japan before heading home, I’ll do my best to be there, as I know once this team focuses on a goal, they’ll do everything they can in fighting to acheive it.