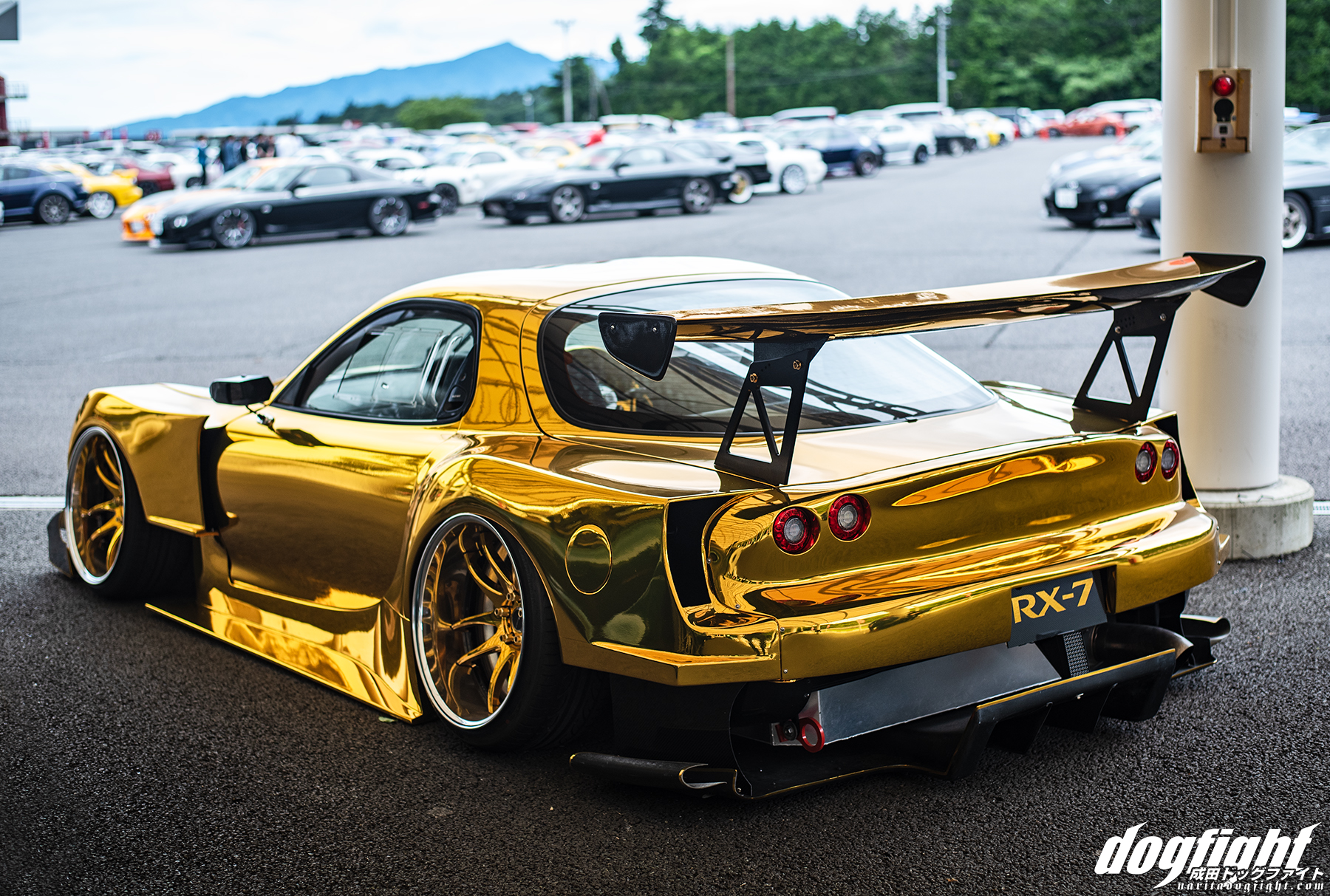 This 1995 Mazda RX-7, owned by someone choosing only to be referred to as ‘The Temple of Buddha’ (or something like that I don’t actually know), is so far off the grid that I normally operate on that when I saw it at Fuji the other week, I had to take a closer look.

The base car isn’t your run of the mill RX-7, but a special Bathurst edition of the Type R; named in commemoration of the Bathurst 12-hour car race in Australia, where the RX-7 was victorious for three consecutive years (92-94).  From what I can gather online, there aren’t many differences between this car and a normal FD Type R, save for a few exterior garnishes.  It doesn’t really matter though, as the owner of this car has modified his RX7 to an entirely different spectrum.

I first saw photos of this FD during the Haruna ‘Grand Prix’ Seven’s Day earlier in May of this year in Gunma.  Why there was a Seven’s Day in May is beyond me.  I think this was the first time he had unveiled the gold wrap, as the car had only been posted in it’s build progress on his Minkara page.  It was a long process (about 4 years) to get the car where it is today.  An amalgamation of extreme street and Super GT concepts make up the inspiration for the exterior. 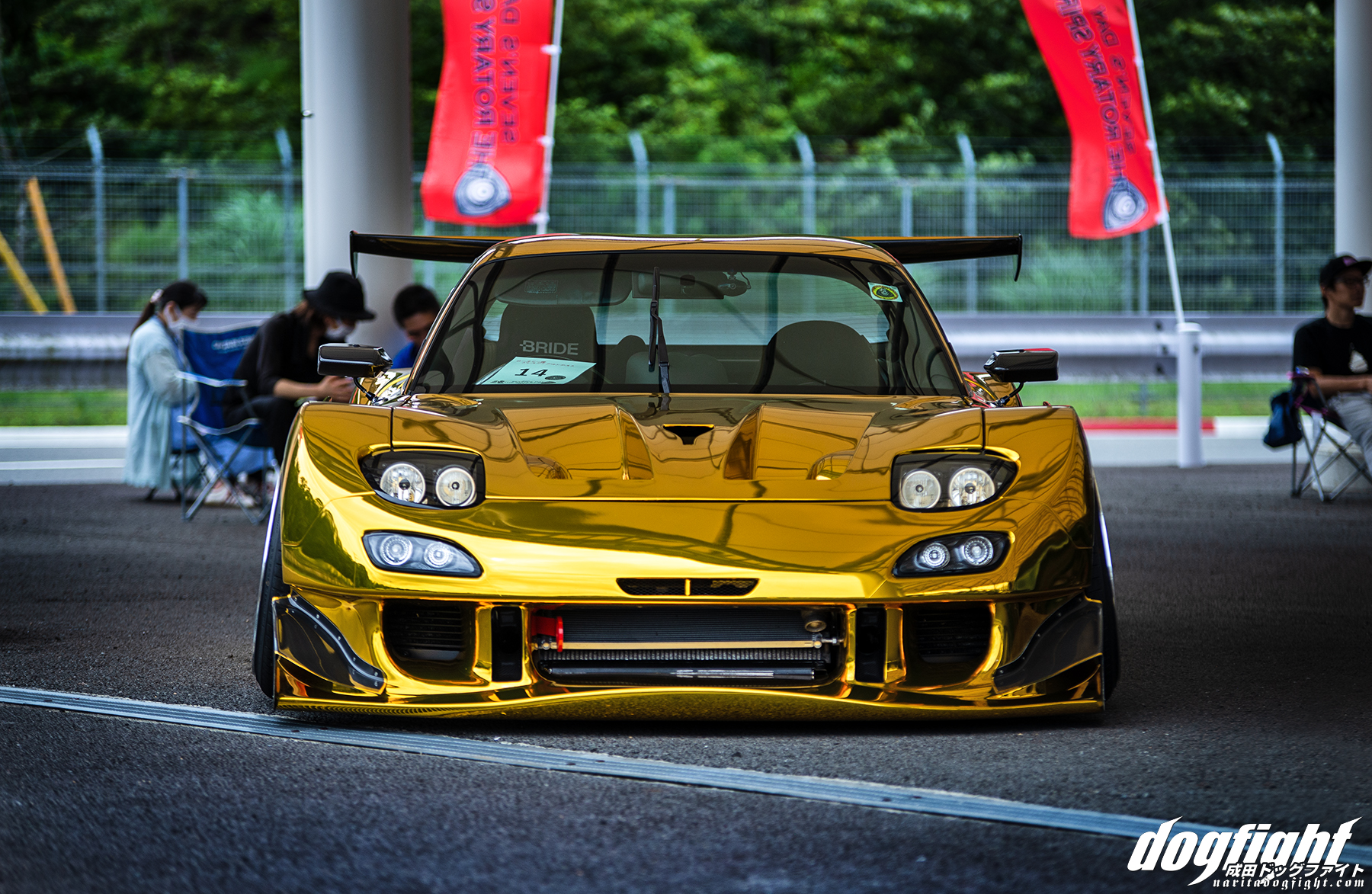 The car in its current state was enough to win the first show it debuted at, and seeing it in person finally, I understand why.  Per the owner, the build cost him over 10 million yen, not including the price of the car (roughly $100,000). 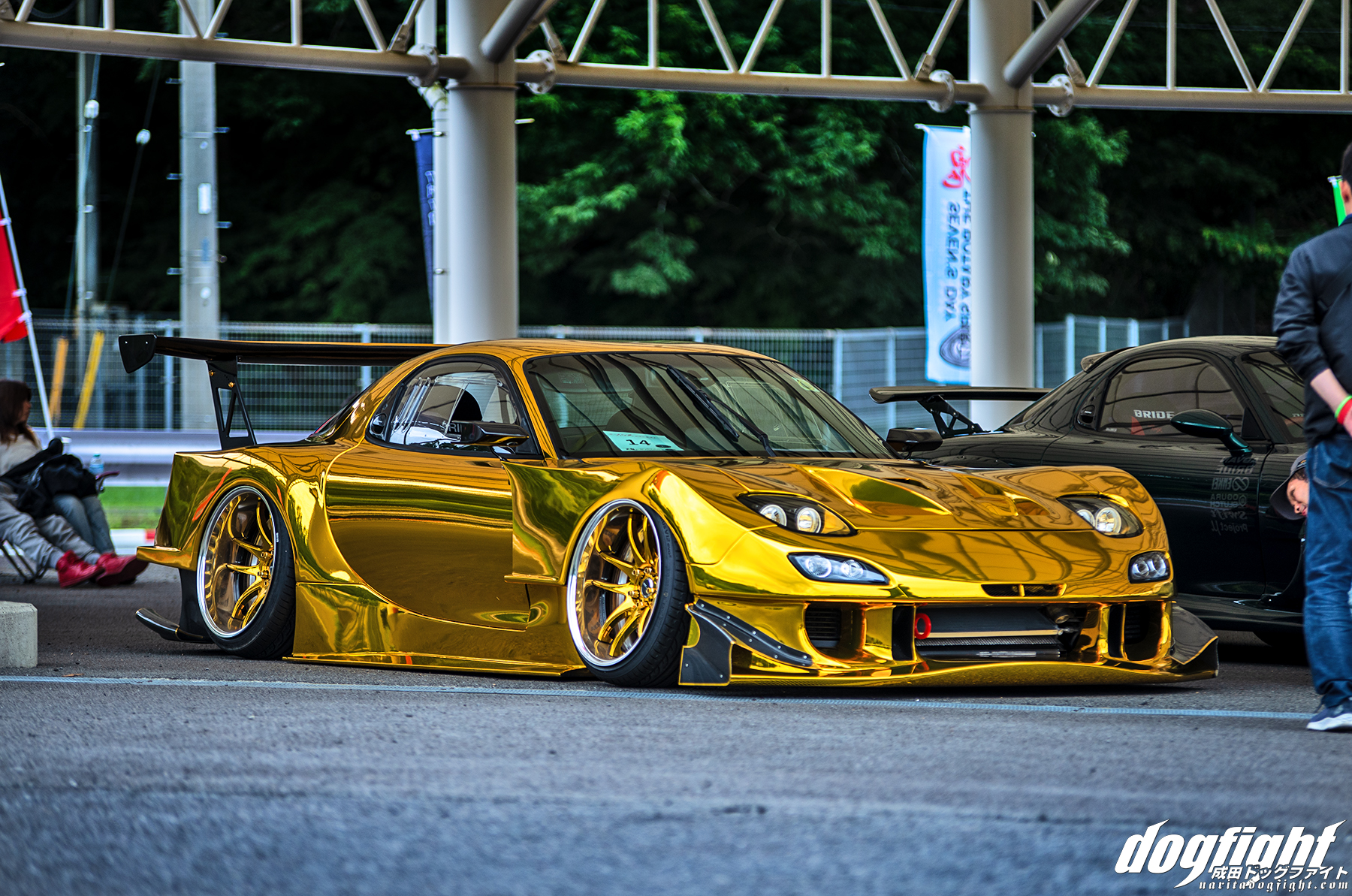 A one-off replica of the RE Amemiya GT kit provides the base for every other modification done to the car; as if that kit wasn’t itself enough to draw crowds, several modifications have been tailored made based off the customers vision. 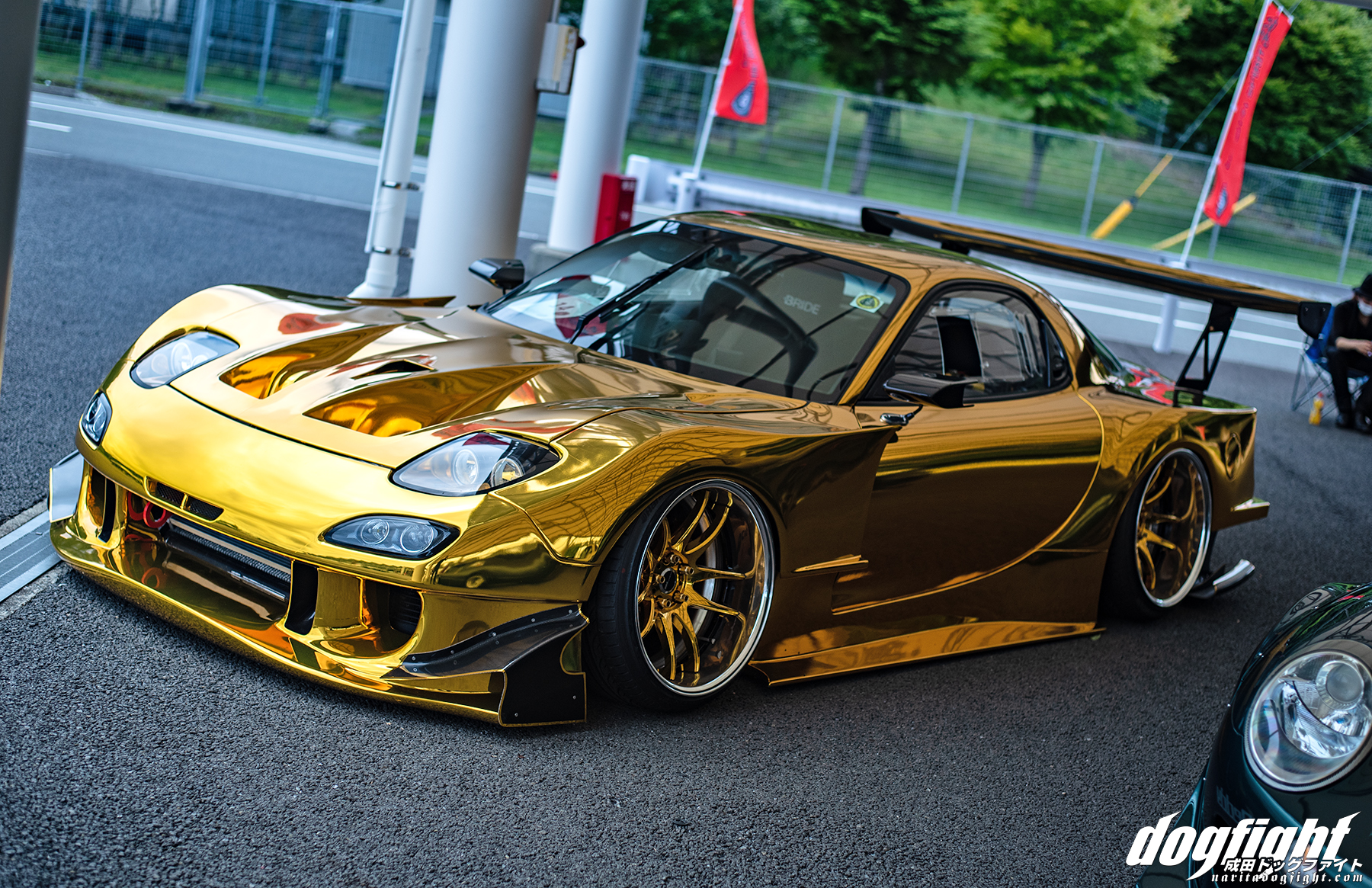 You’ll notice some similarities between this car and Ando’s FD – Ando’s is an actual RE GT Championship kit, so you’ll see that the lines of some of the wide body follow similar shapes but you can also tell where the owner of this car exemplified some of the lines. 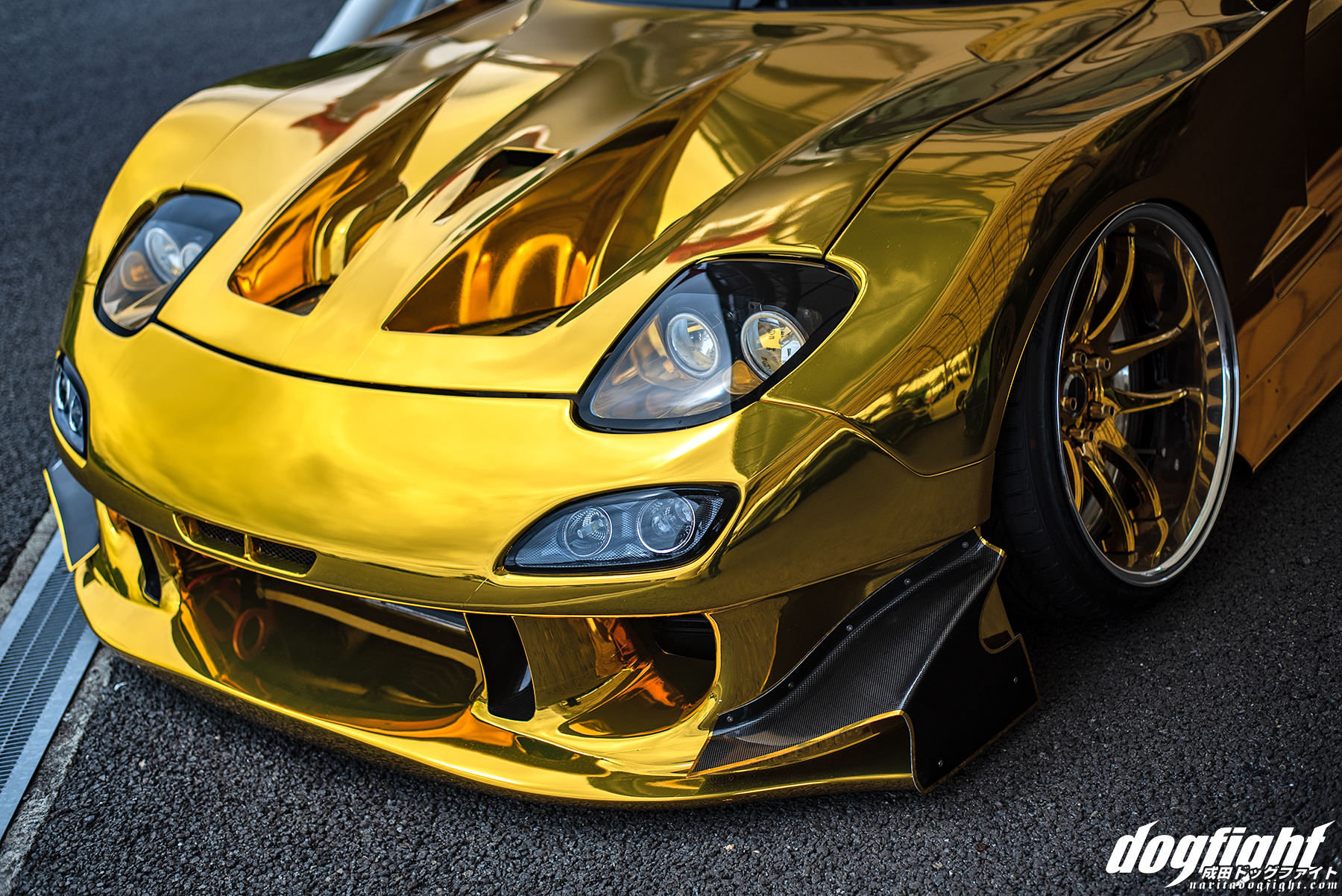 One of my favorite parts about this car are how deep the hood drop vents are; is there even an engine in there? 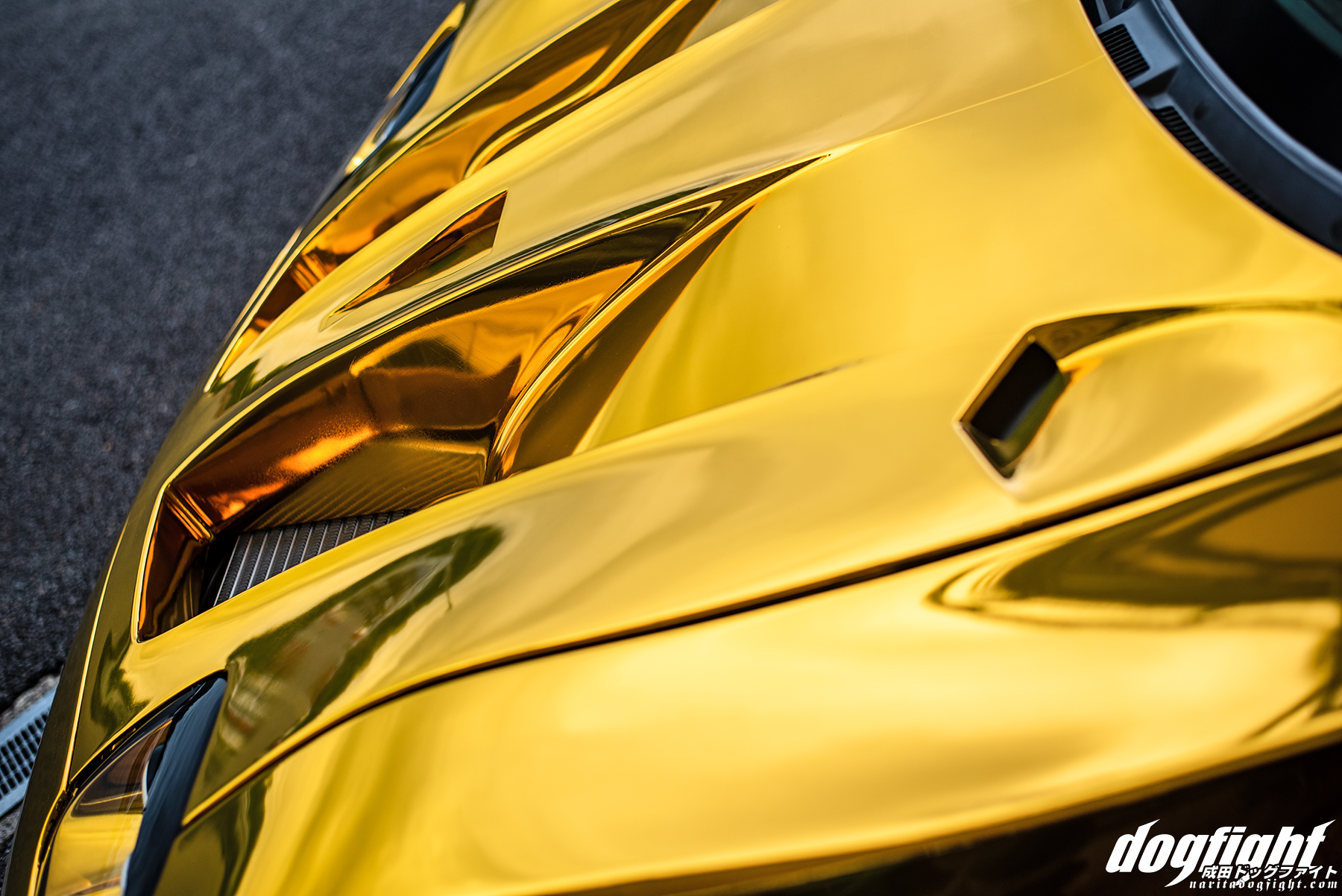 The answer is yes, but for now it is simply a stock 13B with a V-mount to better suit the hood.  The owner, now satisfied with every other part of the car, plans to address the engine and bay next. 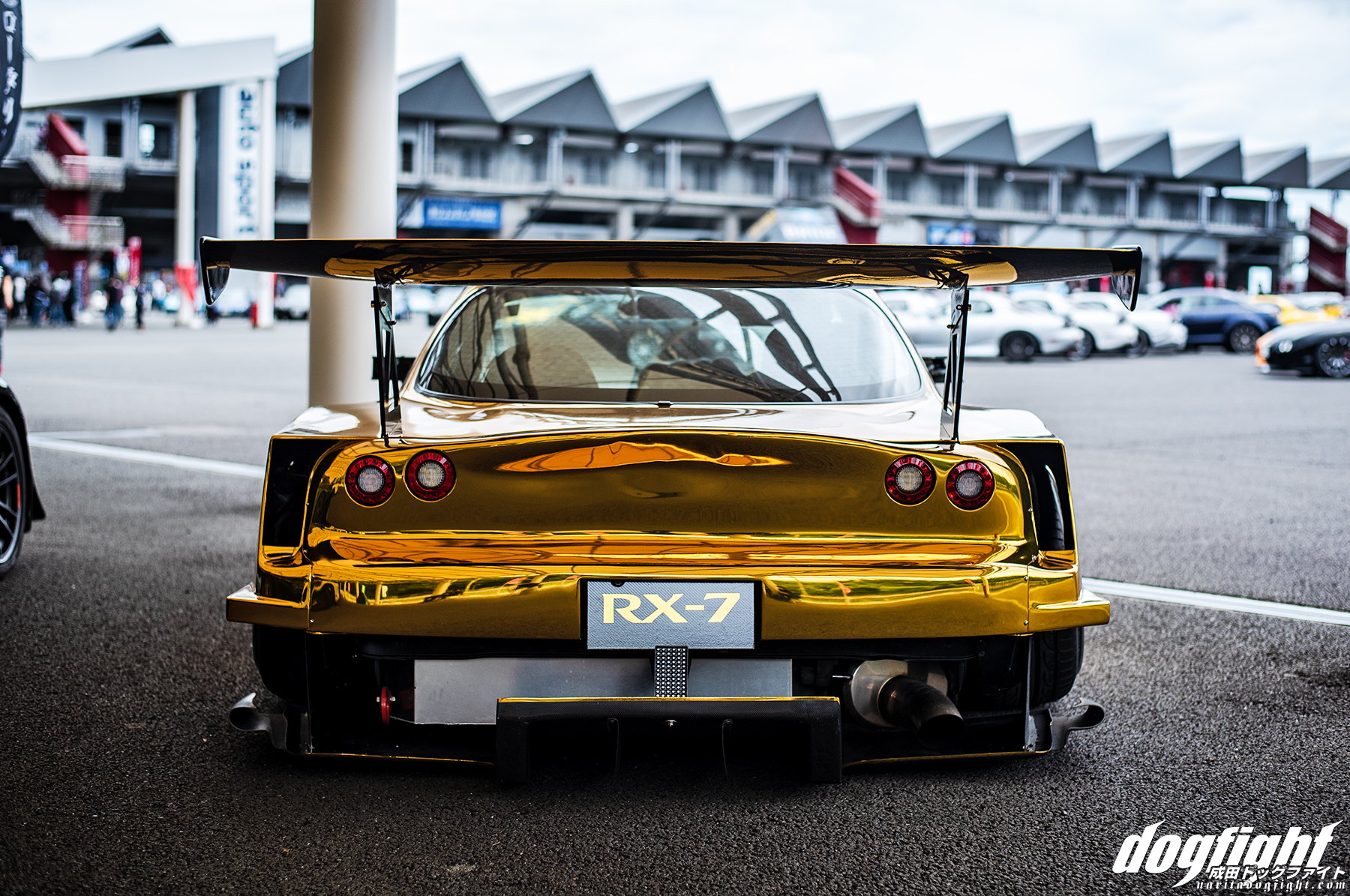 From the rear you can get a good view at just how much wider the car sits now with the modified fenders.  Parts of the Hurricane 7 build were also used to further increase the dynamic look of the car.

The GT-Wing is a variation of the RE wing that isn’t available to regular consumers.  The wing element has been wrapped in the same gold color and attached to the wing stands with anodized gold hardware. 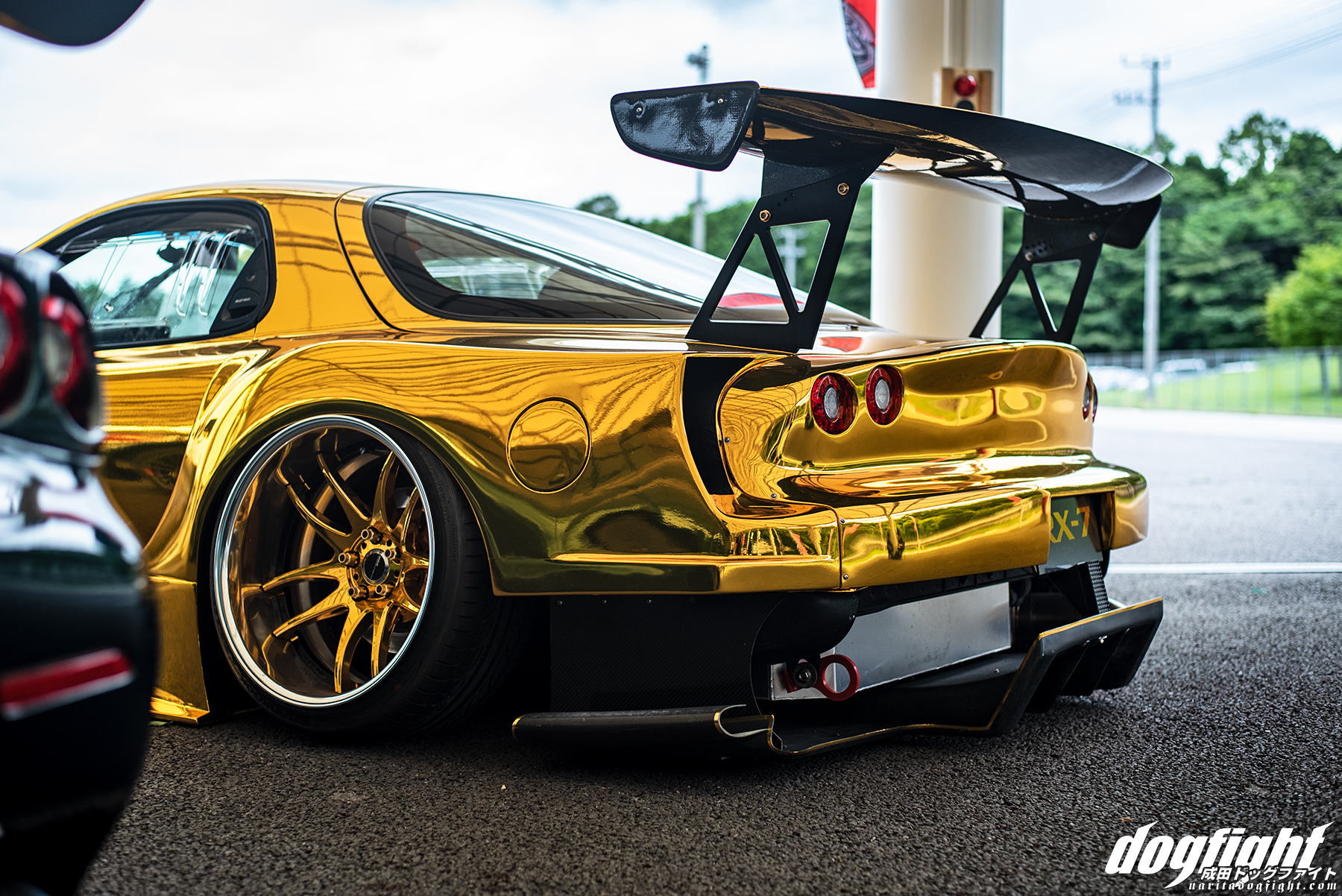 Despite the many GT elements of this car, it is undoubtedly a show car, and to crush any doubt that it is, the owner literally puts it on the ground with the help of an AirREX air suspension kit; the tank tucked away nicely in the trunk. 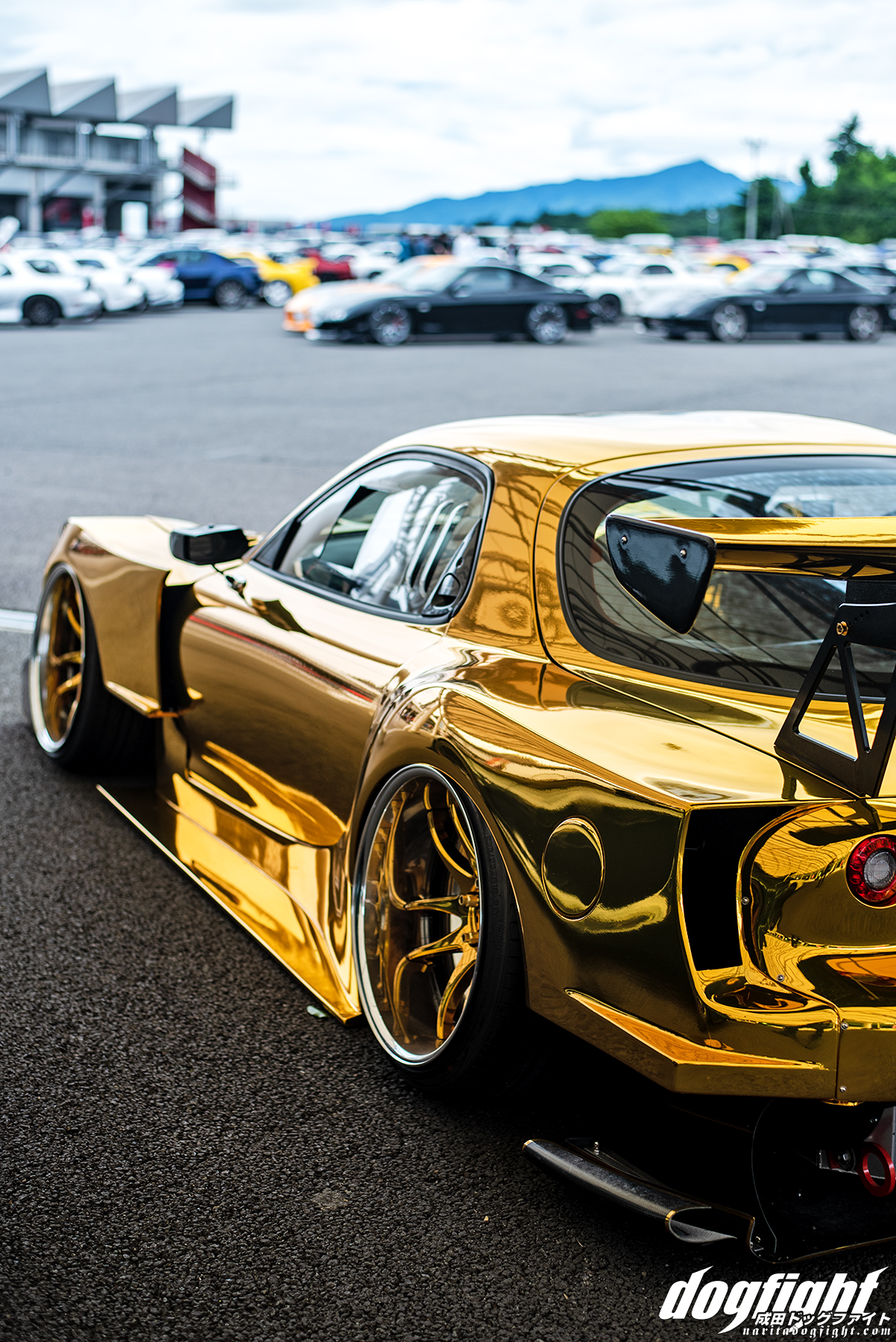 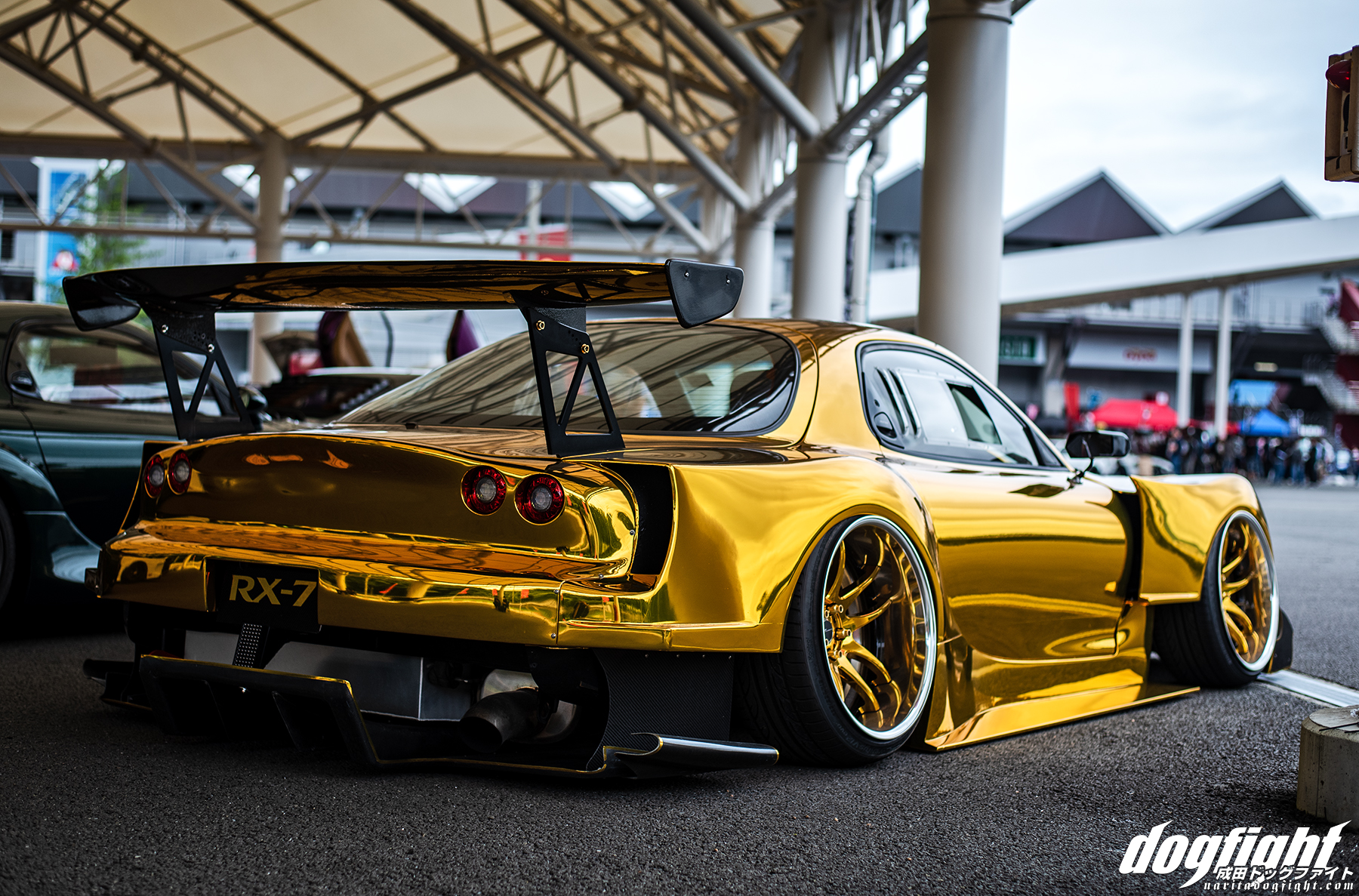 One of the most unique features are actually the windows that the owner sourced from actual dead-stock of old GT300 cars.  He happened across the original manufacturer and they happen to have inventory leftover that was just sitting around.  Up close you can see the cutouts and slider are immaculately done. 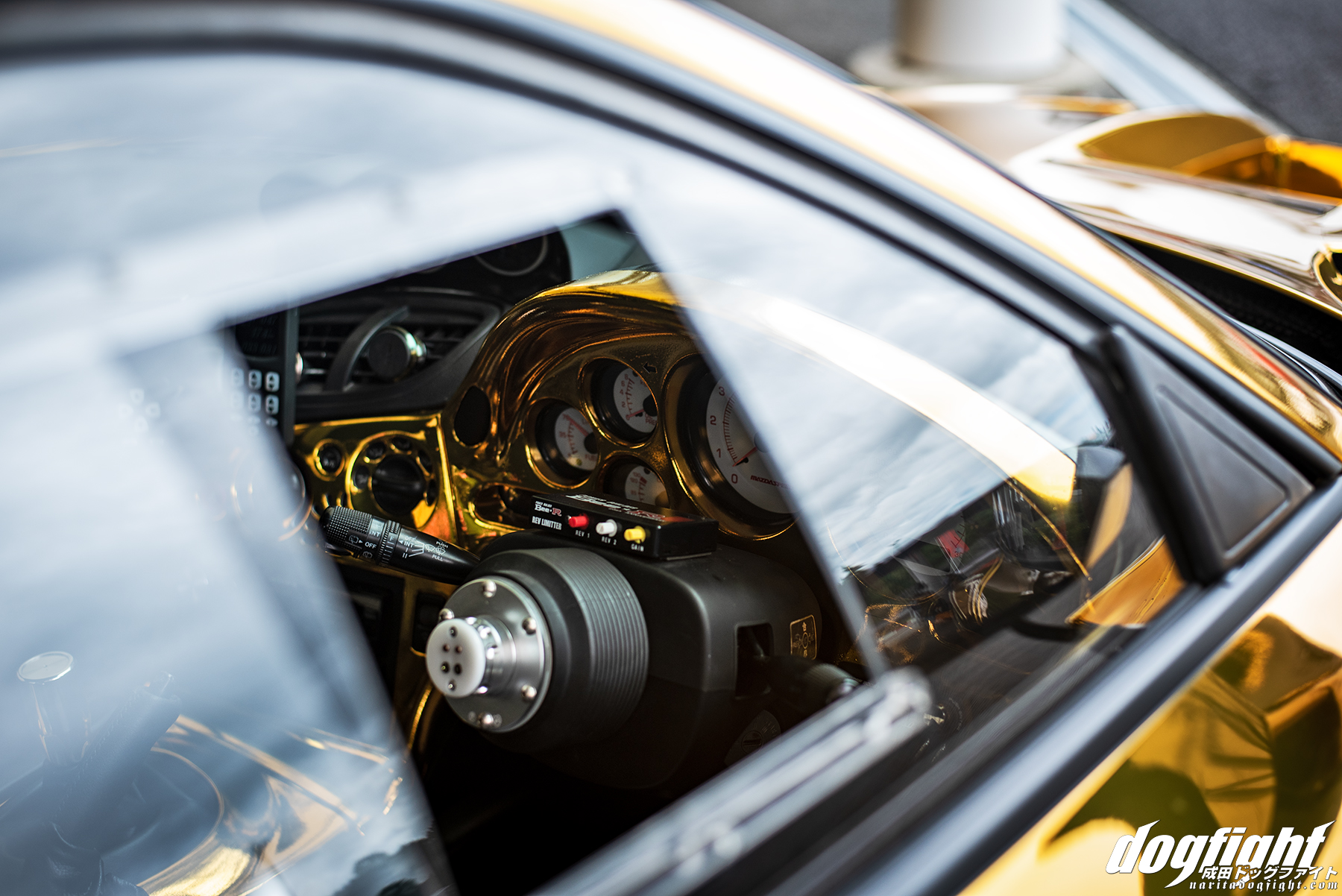 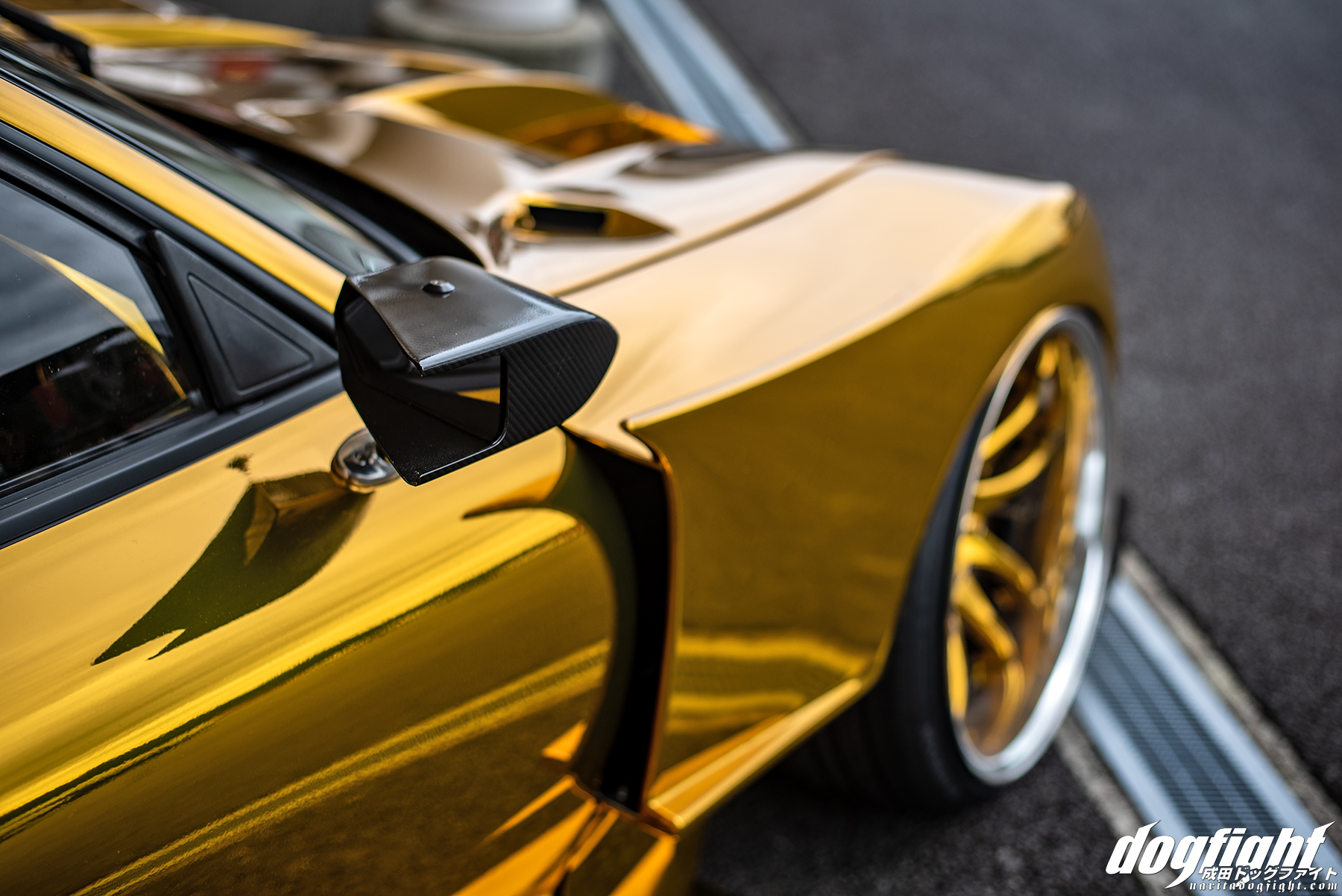 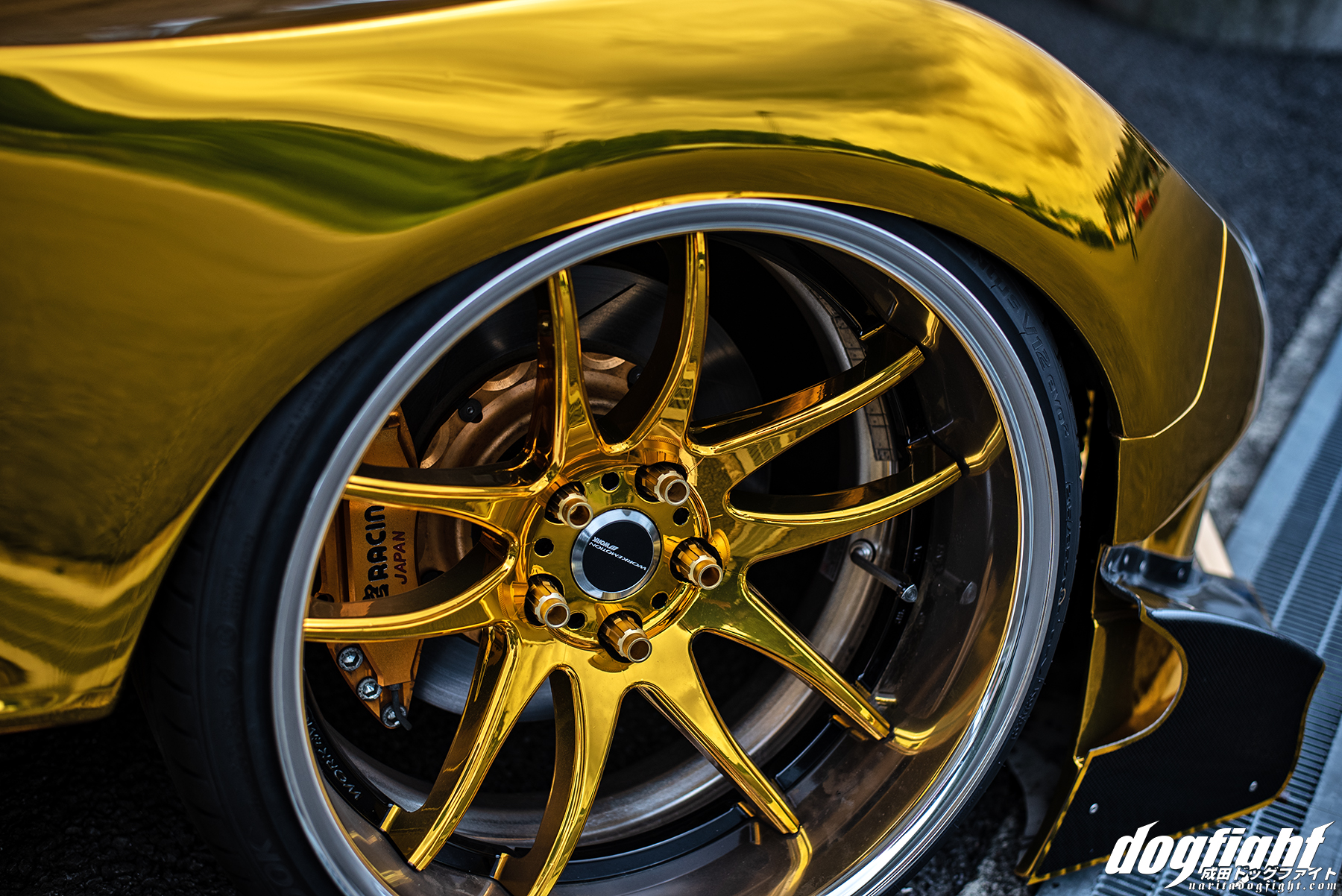 Two-piece, 19″ Work Emotions paint matched to the cars exterior are stuffed under the new real estate at all four corners. 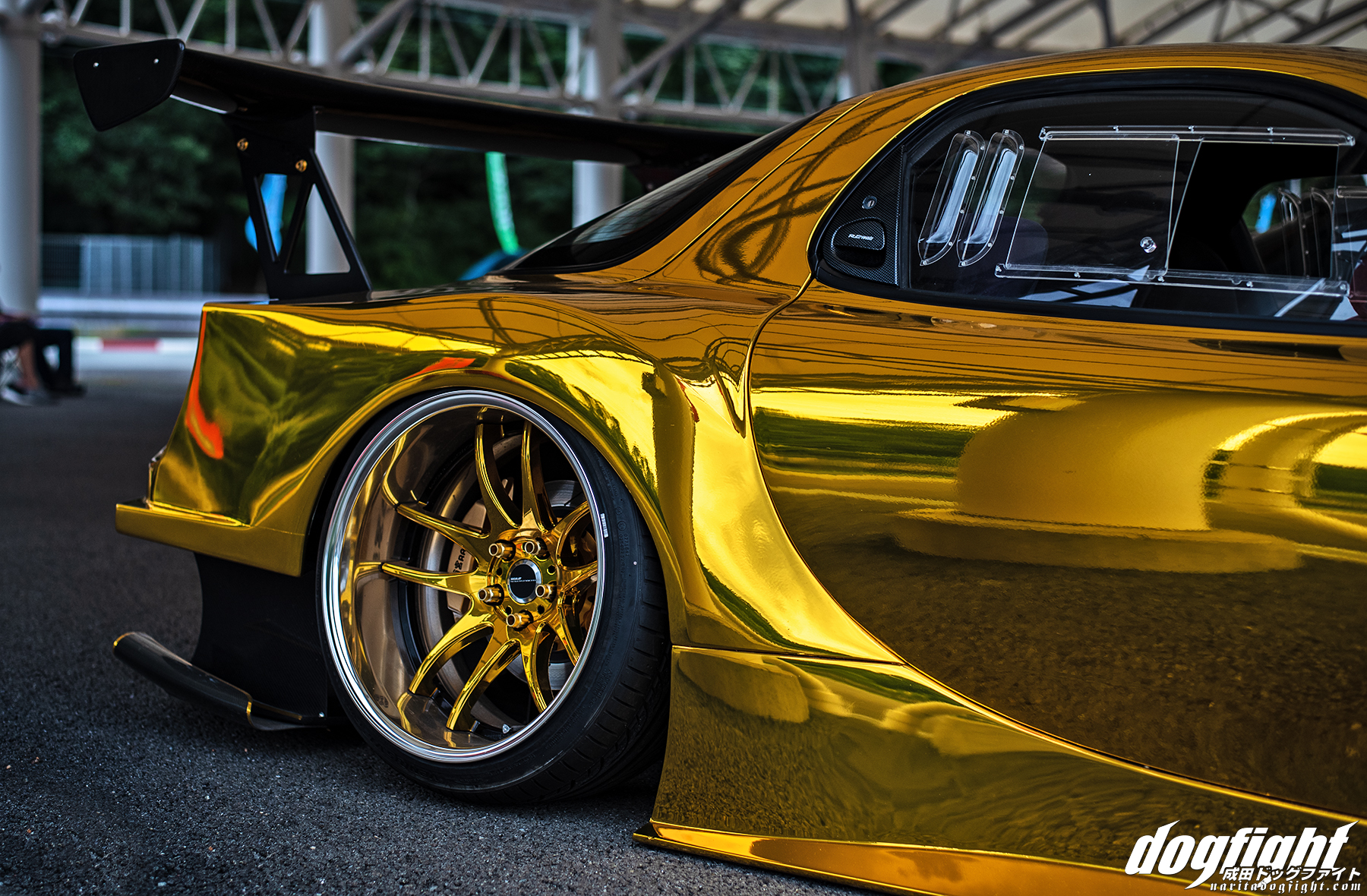 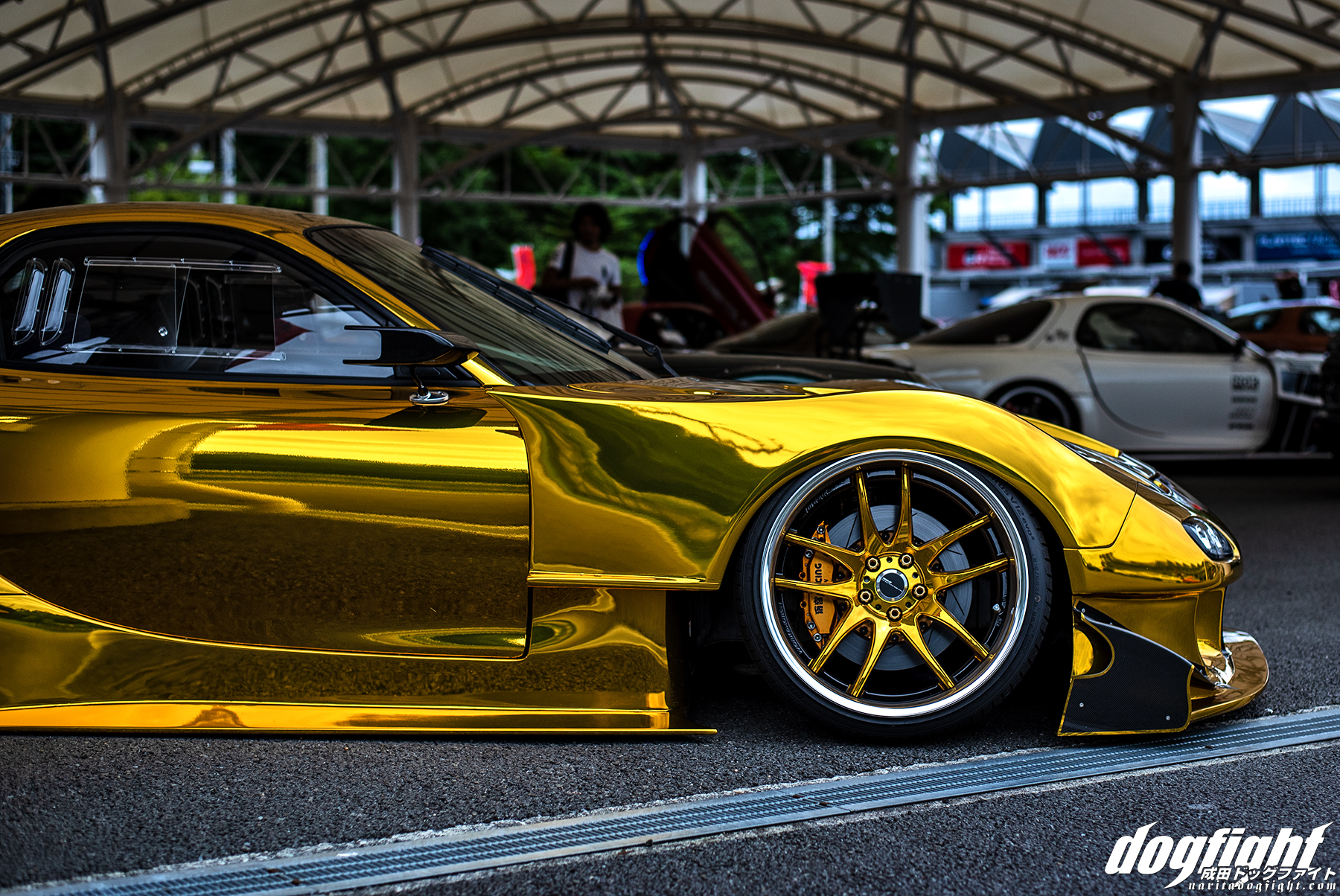 Whatever you style of choice may be, you have got to admit that this car is something that goes beyond your typical show build and is a good representation of the unique ways that Japan is pushing to create new variations of this nearly 3 decade old car.

I’m still working on processing coverage of this event as a whole, but in the meantime you can check out a walk-through on our YouTube channel.