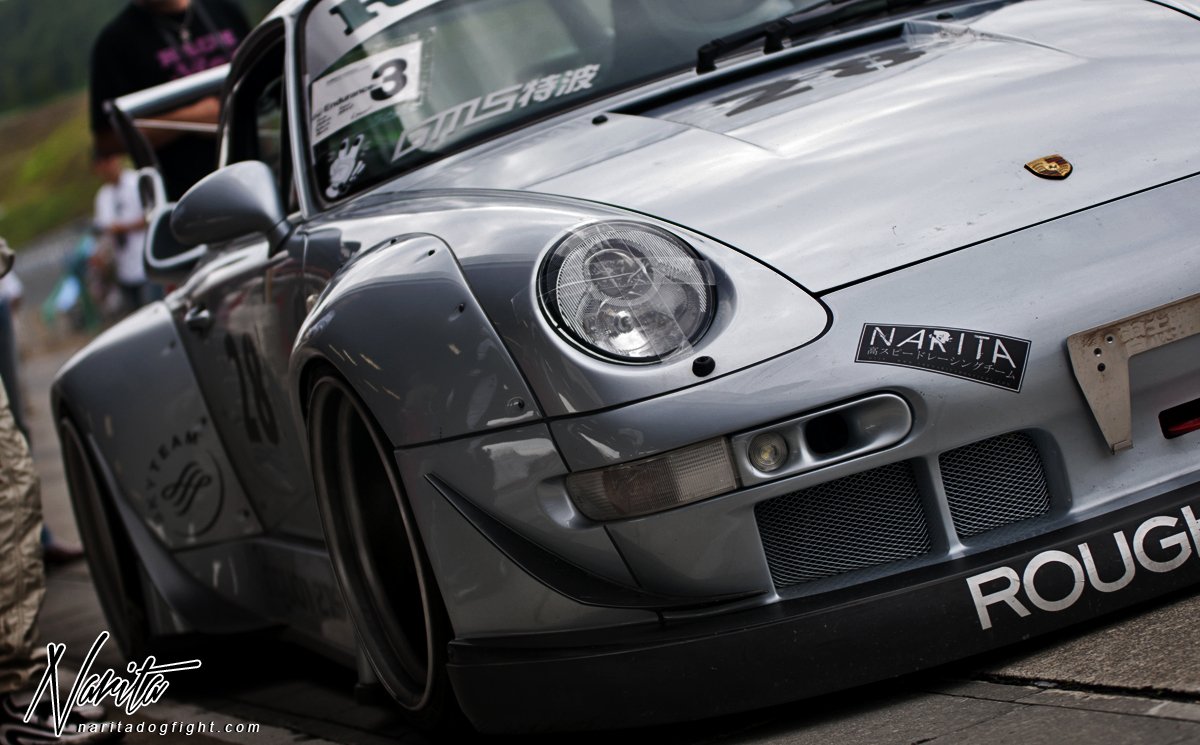 As the sun rose over the grandstands of Twin Ring Motegi, I knew that the time to start the endurance was getting close.  Not yet tired, despite being up a solid 24 hours at this point, I did feel a rush of excitement as soon as we finished the driver’s meeting with Seike and Nakai.  After the driver’s meeting, we all tied up loose ends, went over strategy with our teams, and I went to smoke a cigarette.  My first planned stint wasn’t until around 0930, so I headed up to try and snap some pictures of the beginning of the race.  I knew that I wouldn’t have much time during the actual race to take pictures, so I took advantage of the time I had in the beginning.  Not before Alex and I made some modifications to the time table though haha.  Shinji, a.k.a The Doctor, was originally planning on only racing for half the race, and Alex and I were hoping the others would get tired as well so we could finish the last half on our own hahaha.  Far fetched but worth a shot.  I was actually glad Shinji decided to go the full length; he’s an awesome dude. Final shot of our car before I headed out to take pictures, and to fetch Park from his sleep the Alto as well.  Alex needed his camera equipment, which was in the car with Park inside snoozing.  The Idlers logo on the canard was a result of a sticker being pealed off and taking some of the paint with it.  It made a cool effect so we did it to both sides. I was stupid for not taking my camera out when we pushed the cars onto the straight.  I just ended up taking a bunch of cell phone pics like an Instagram hero.  There was a lot of good opportunities too, so that kind of pissed me off; oh well.  I wasn’t too worried about it because in about an hour and a half I’d be driving a RWB 964, and well, how mad can you really be about things after that?  Here’s a shot of Alex getting some film of Rough Soul and Hooters. As I was walking around the track I ran into a couple of these Lotus race cars.  I thought they were pretty cool; especially because all had TE-37’s. A lot of the places I usually shoot at around Motegi were blocked off, so I settled for a couple high spots I was able to make my way too.  Unfortunately the angles I could get weren’t the best.  Plus, if you didn’t know already, Motegi is a big track.  I had no transportation other than my two feet and I didn’t want to tire myself out before my first go. A lot of these will be repetitive, but I wanted to get a shot of all the Porsches on our RWB Team.  At least I got to practice my zoom panning. Lovers Rouge 993 was such a great car.  Definitely my favorite on the track that day; and the funnest to drive. Our car, Rough Soul, looking pretty dark as it shoots by some traffic. We drove in planned stints of 30 minutes; although some came in early due to mechanical issues (me for one…actually twice).  Nakai stayed up through the whole race; tending to all issues the cars or drivers ran in to.  It was pretty amazing – Nakai is a machine. Nakai making sure that the driver changes went without any issues. There were some other pretty awesome cars on grid as well; like this Ruf & Scuderia Honda S2000 that was pitting right behind us.  I didn’t get an opportunity to really go around and explore the other garages during the race because I was helping out with each driver change and fueling. Another shot of the S2000 leaving pits – you can tell by the condition of the car that this is pretty far into the race at this point. These are pretty out of order, the 993 is looking pretty darn clean.  I’d say that this is during the first or second driver change on this car.  With each car that came in, I kept getting more and more excited to go for a drive.

I mean, Motegi is a track I’ve been to several times.  I’ve seen Super GT battles, Taikyu races, time attack machines all rip around the circuit and I always wondered how I would fair around the course.  My chance to find out was finally approaching.

*Insert Go Pro footage of me driving the 993*

Which of course I don’t have yet…Alex has all the footage but is busy getting Circuit Soul ready for the grand opening on August 31st.  I’ll upload it to our fan page when I get it though.  I don’t have any footage of my drives in the 964, but I can tell you they were pretty exciting.  I spun once as a result of the engine cutting out at 4k due to what we eventually found out to be a bad MAF sensor.  Other than that it was just pure, fun driving. Lovers Rough leaving the pits as the sun begins to set on the circuit.  Unfortunately it was timed so I didn’t really get to drive at night, I would have loved that. Our car coming in for one of it’s final driver changes.  You can see how dim the lights were in our car; they didn’t get much brighter than that. At this point, everyone was showing visible signs of fatigue.  I was drawing close to my 36th hour of being awake, as was Nakai.  I took some time to rest in between drives, but I never fully fell asleep. Yoko catching up on messages and eating her bento. The final fuel up. Signs of damage from a day of dog fights. And just as soon as it started, the race was over.  12 grueling hours of torture for these cars, and pure bliss for the drivers.  I was tired, but so happy to have experienced it.  This is Seike’s car; the organizer of the event, and saying that it was fast would be an understatement. After the last lap all the cars pulled back into the garage to be ‘legalized’ again, and to put back the passenger seats in place of the fire extinguishers that were once there.  Again, I don’t have many photos of the aftermath, as I was busy helping to get out of there as we had a long drive back to Chiba. Quick stop at 711 and we’d be on our way.  I’ll leave out the part where Alex and I got lost in Chiba because we had to pull off about halfway down the Expressway because our brakes had no pressure from the fluid being boiled over during the race…

I have one more special post regarding this race – Nakai’s drive.  Stay tuned and thanks for visiting.