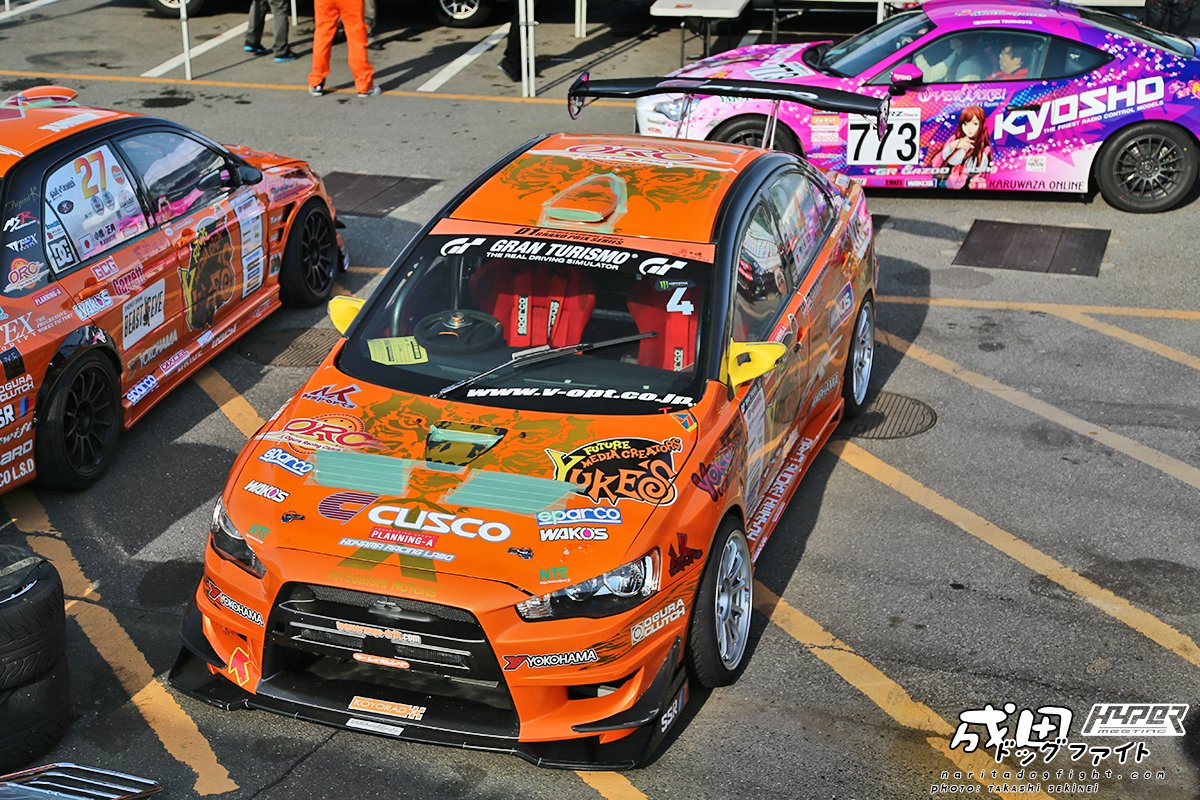 This past weekend Mr. Satsuei was at Tsukuba Circuit to get coverage of Hyper Meeting 2014; an event that offers an extremely wide variety of popular cars, shops and a few events in both time attack and drift.  It’s crazy to see how saturated this event was with EVO’s, Subarus, and 86’s.  If you think about it though, these are some of the most popular cars on the market today, and by it’s self described name, Hyper Meeting is actually a ‘celebration of custom car’; and what better cars to customize?  The posts covering Hyper Meeting will have no particular order, just as I see fit really.  Imagine a basic exhibition of drifting, time attack events, and various vendors with display cars hosted at TC2000 – sounds amazing right?  Well, let’s check it out! Team Orange was on hand with their pair of Evolutions; a 9 and 10 respectively.  They were part of a drifting exhibition part way through the event. The iconic Yukes livery has gotten much brighter over the years with the addition of gold chrome. Carbon doors with the windows wrapped in chrome; I can’t imagine anything better. One of the cars that D1GP brought out for a demo run. Orido’s been pretty good at running this thing into walls this year – fortunately he kept it on track this time. Good look at the interior of the D1 machine. My personal favorite 86 that was on hand belonged to Blitz.  While they had a couple on hand, this one is beyond cool. One of the best looking 86 kits on the market at the moment. Another 86 that was on hand was the Rasty built circuit runner.  This car, while in appearance is magnificent, has been plagued with mechanical problems.  Even at this even it suffered some sort of transmission or engine issues. I love the new look though.  Half the livery was missing due to the new doors, now issues in carbon fiber.  I’ve been posting up a lot of shots of the new rear diffuser as well that looks like it takes it’s styling ques from a Super GT car. You’ve probably seen this car in my Battle Evome coverage.  It’s an Unlimited Works built EVO, but what I didn’t know is that they were using a Full Race manifold.  Not sure if it’s some sort of sponsorship deal, but I thought that was pretty cool.  Especially from a shop like Unlimited Works where if anything you’d think they’d make their own manifold.  This is a customer car though so who knows. A closer look at the bay. The S-Craft STi that was at Auto Salon was on hand as well –  not sure if it ran TC2000 though. Here’s a random EVO with an Evangelion cut out in front of it.  I wouldn’t have posted this except that it reminds me that Kodi needs something like this for when he goes to the track. Varis won the award for most bad ass display of all time with what seemed like an unlimited supply of all-wheel drive builds. See a common theme at this event? Not to be left out, the Trust built, Rocket Bunny adorned 86 was on hand and even got some laps in on TC2000.  After staring at the Blitz kit for so long, the RB kit looks pretty mild. Speaking of mild, and by mild I mean not mild at all, here is an EVO that you should all be familiar with – Hiroyoshi Shimada’s, of Kyushu Danji fame, circuit fighting EVO 9.  I’ll have a closer look at this coming up. Stay tuned for the second part of Hyper Meeting and some on track action.