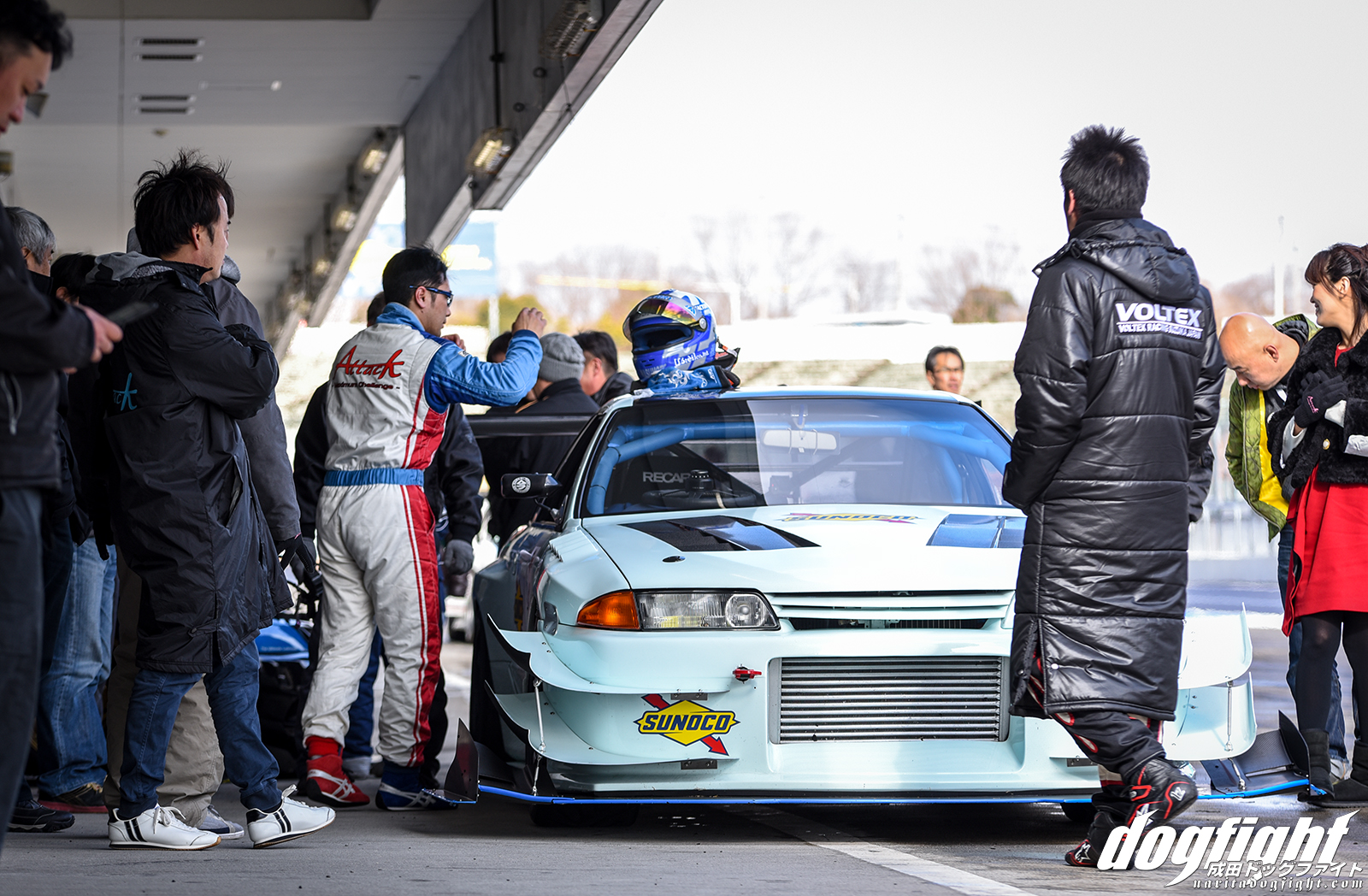 If you had the opportunity to meet Masumoto just once, then it would go without saying that he is the definition of someone who lives for circuit racing.  The energy that he resonates around the track is that of true happiness and excitement to be doing what he does.  Over the past few years he has helped the Attack series grow into something much more than just a private, invite only track event.  The fact that Attack is now a recognized championship series throughout Japan is thanks in part to Masumoto-san’s hard work and dedication.  His personal GTR build has paralleled his work with Attack, and provides him the outlet he needs to channel his energy.

The Skyline you see here didn’t happen overnight, however.  With the worldwide popularity of the sport on the rise, the competition between friendly rivalries has been ever-increasing.  So many of the frontrunners in Japan have taken their builds from double-duty street cars, to full-blow race cars, that it almost feels like a trend.  Masumoto is no exception, and within the past year his R32 has transformed into a dedicated track car.  I remember 3 years ago when he came out to the Attack Meeting, his car looked so mild comparatively.  3 years is a long time in the automotive world though, and all things must progress to achieve faster times.  So is the case with Masumoto, and on his downtime was able to evolve his car to it’s current state. 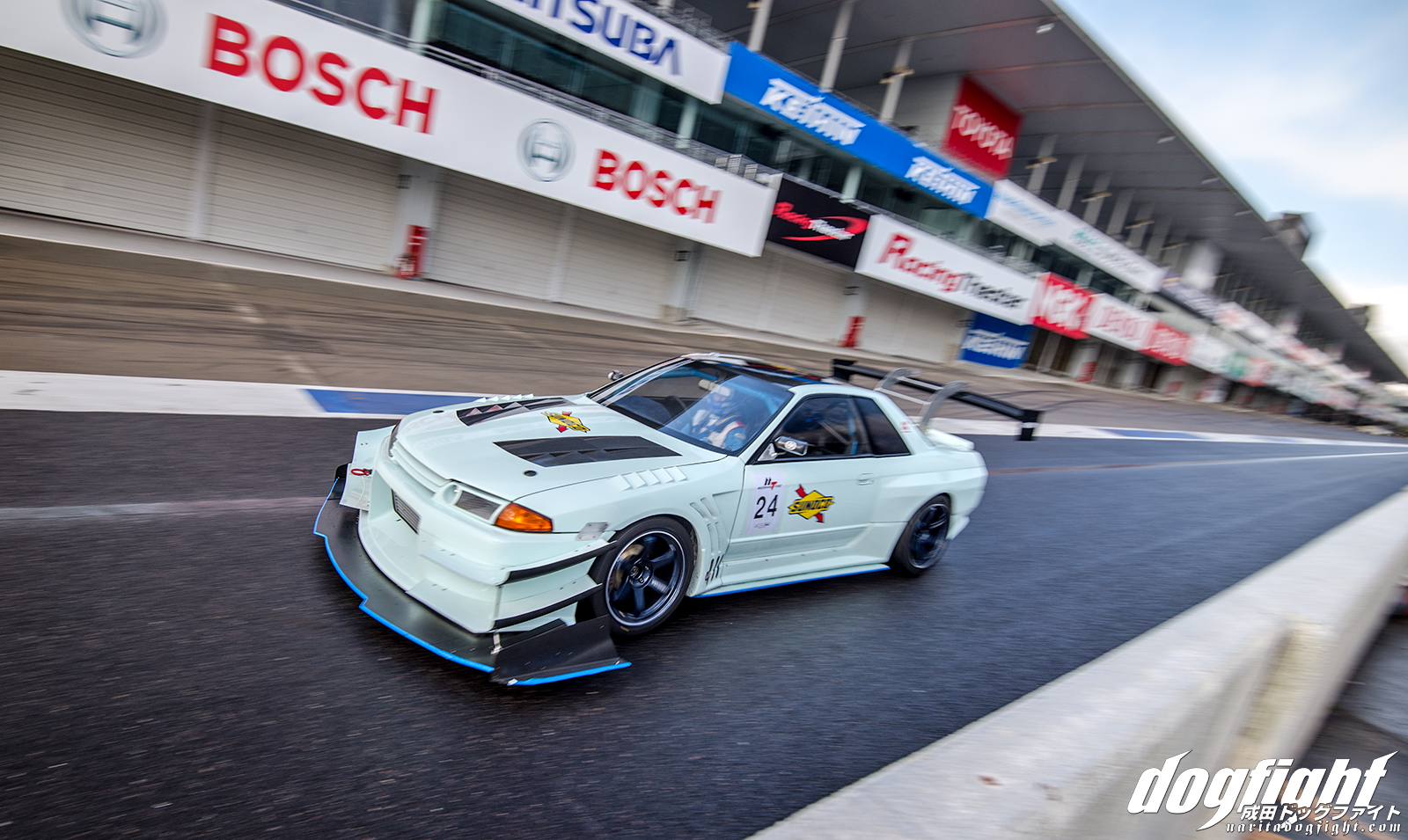 The most noticeable of upgrades, as usual, is the wildly aggressive aero package that adorns the exterior of the car.  The carbon front splitter and canard setup are mated to the new style front bumper built specifically for Attack.  The dry carbon hood features custom vents to allow heat to escape from underneath.  Rounding out the front end is also a passenger side headlight that doubles as an air inlet, also houses a custom LED fabricated at Car Shop Glow.  In back the TM Workshop rear fenders lead back to the Super Now produced swan neck GT wing to aid in keeping the car pinned to the asphalt. 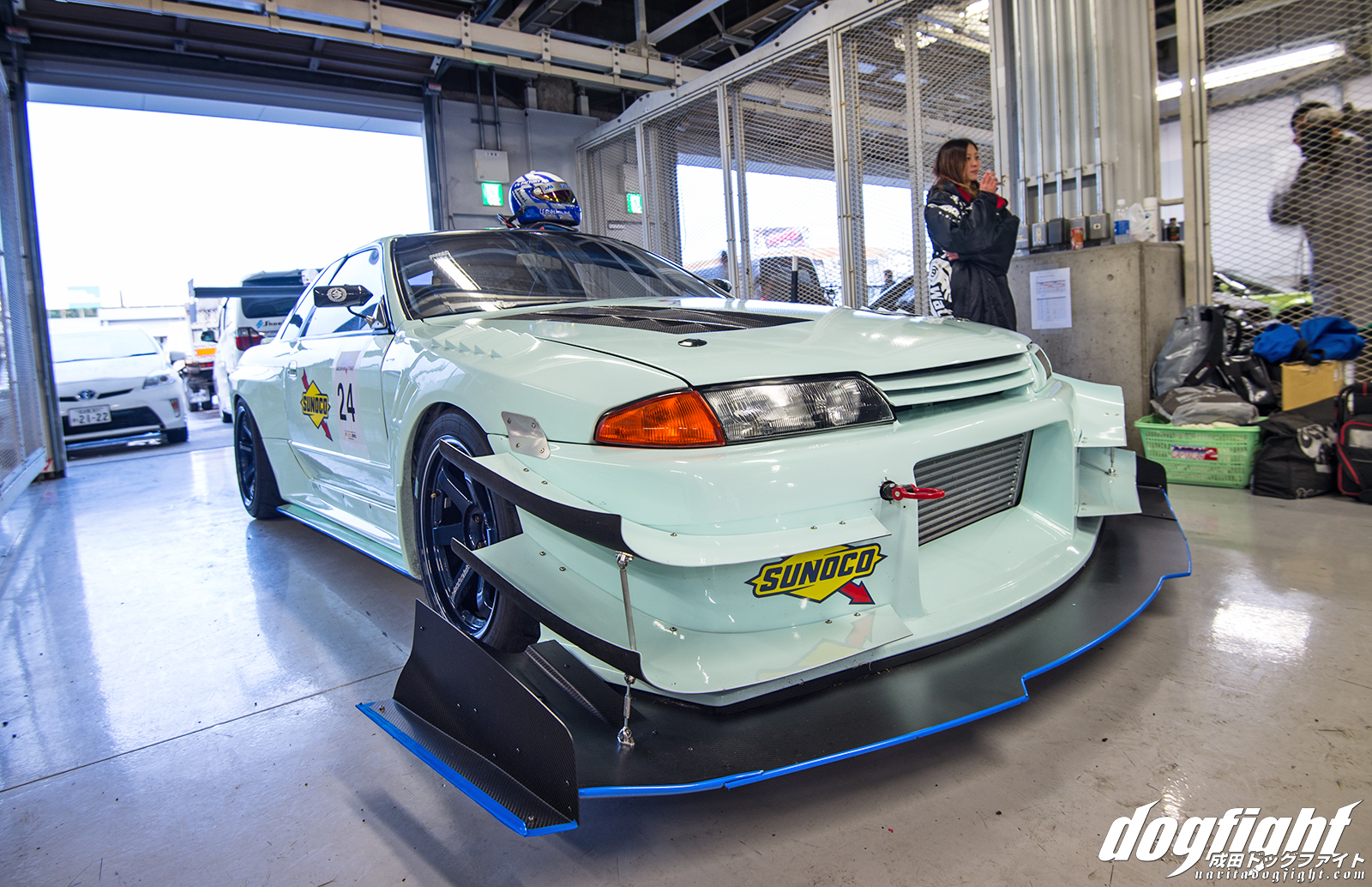 The cars somewhat aquatic light blue color has always given me a false sense of seriousness about it.  Although it is a pretty and unique color, one would think that for a car that’s become this aggressive the color is no longer fitting.  The color does maintain a very good fit for the owner’s presence however, providing a playful tone for what most regard as a stringent event. 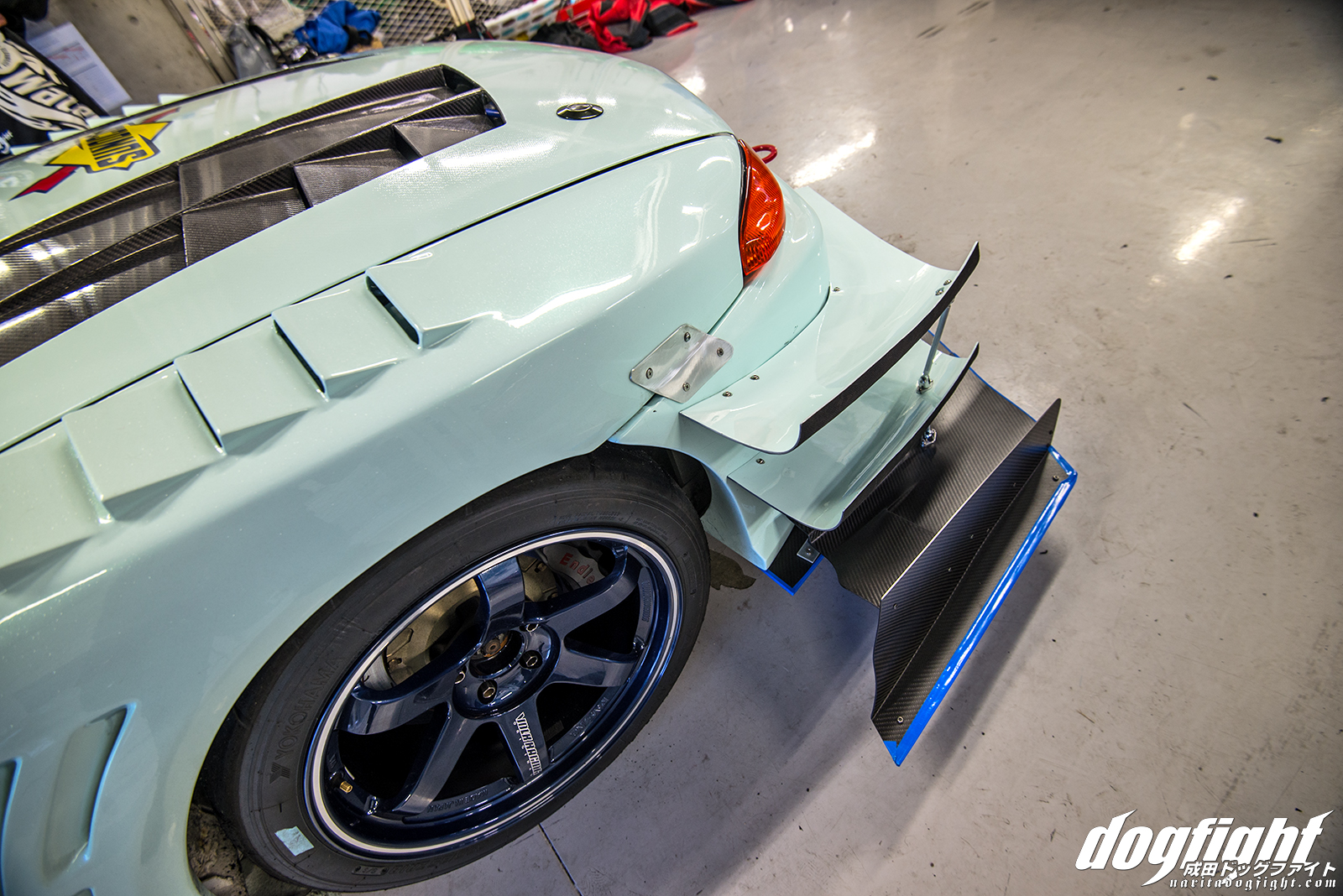 This view of the front fenders, hood and front aero give you an idea how much wider the car has become. 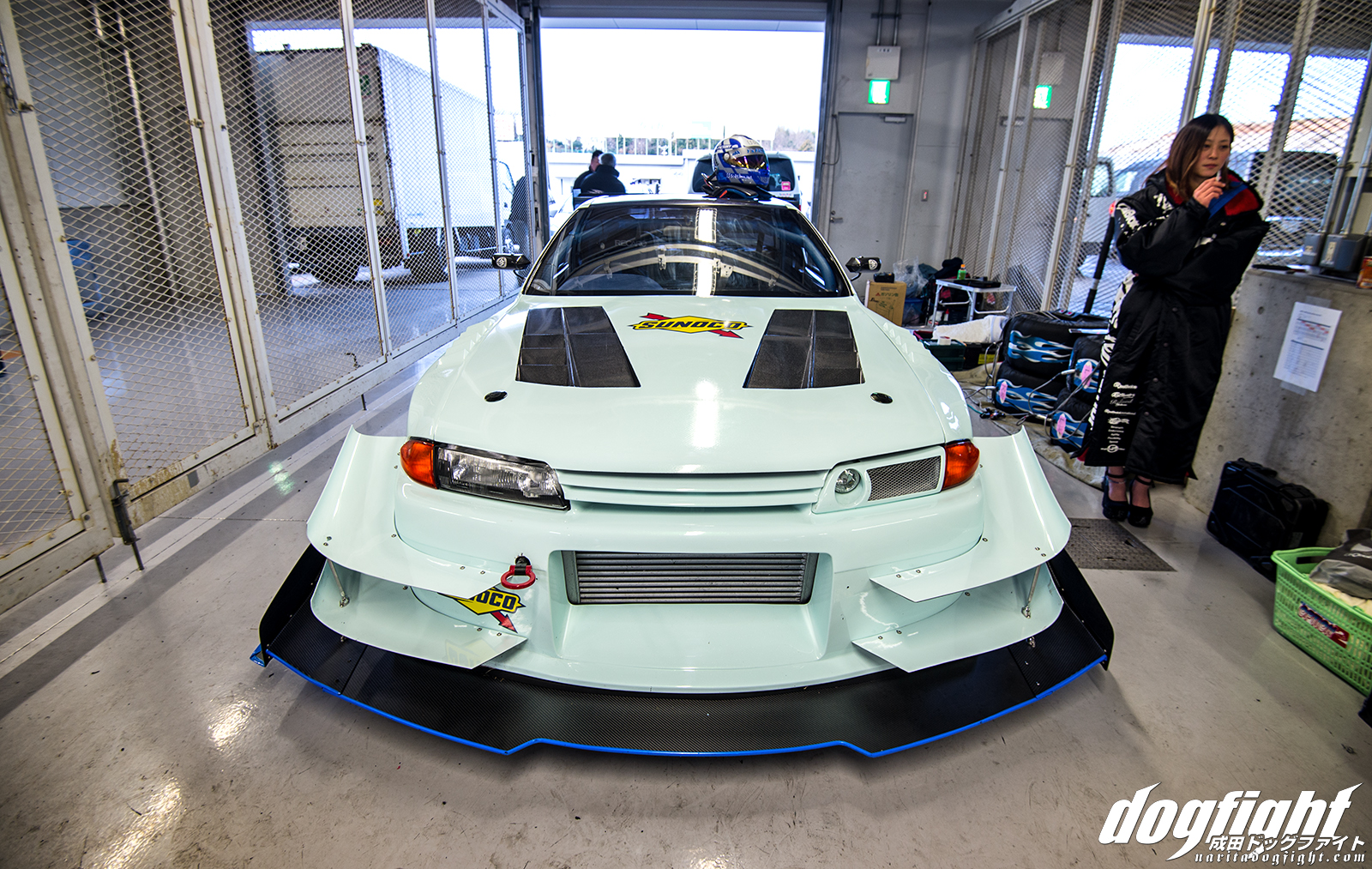 I’m not sure which is wider between this R32 and the Seyamax R32…would be a cool side by side comparison as their front end setups are almost identical. 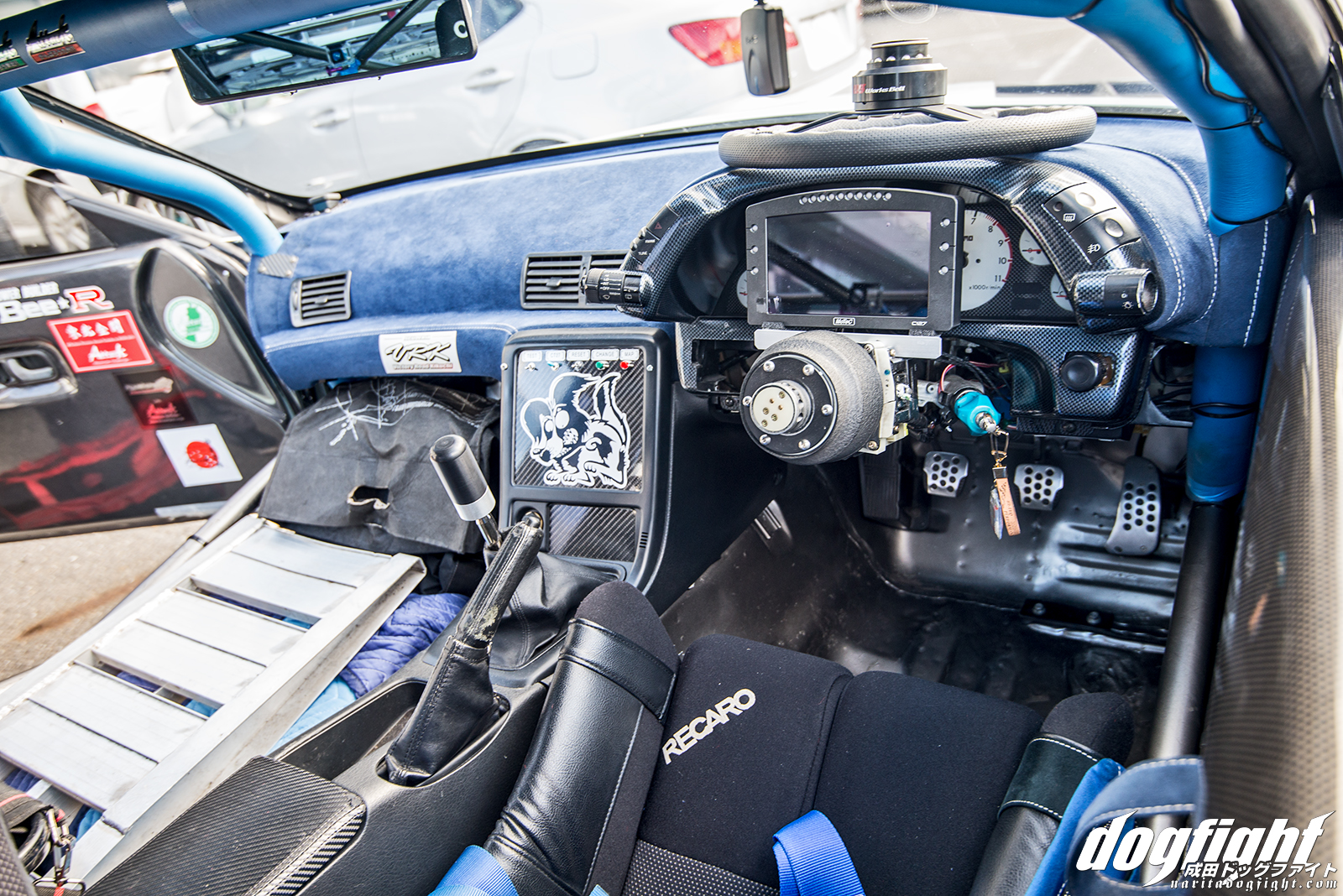 The inside of the car is a mixture of what you’d come to expect in a build of this caliber.  Aside from the OE dash, which has been wrapped in suede, none but the essentials remain.  No more climate control or radio; in it’s place carbon block offs which house switches and indicators.  A Motec C 127 data logger takes the place of the stock cluster above the steering wheel, and provides the driver with real-time information on circuit.  A single Recaro SPG holds the driver in place and steering input come courtesy of a Nardi 350mm.  Safety comes in the form of a Body Shop Ogata/Garage M spec’d roll cage, built and welded by Okuyama.  The entire chassis has been stitch welded by Scuderia VRK.  The car’s not only safe now, but very stiff; which is a must for a chassis of this age. 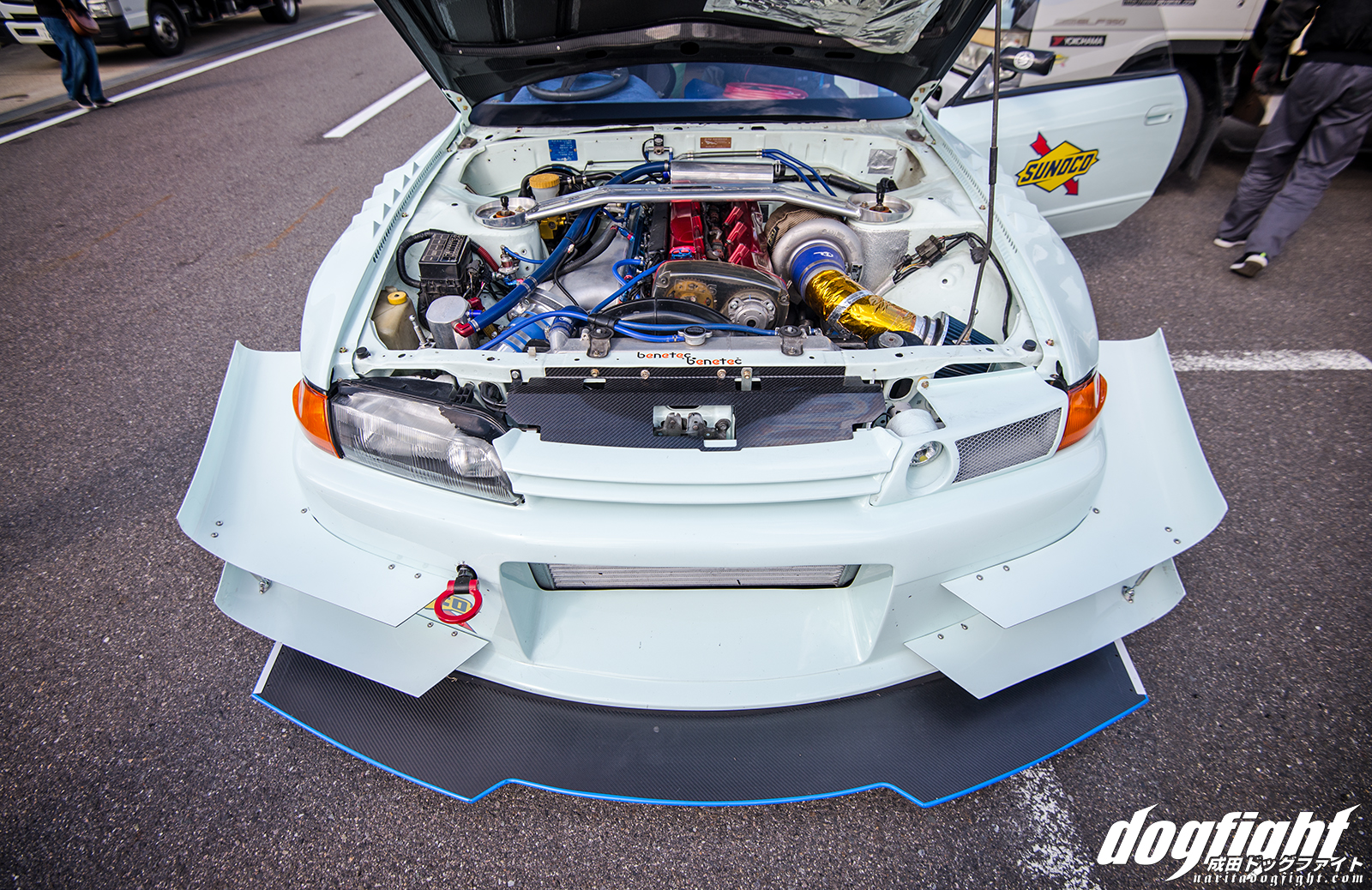 A car like this just wouldn’t live up to it’s appearance if it didn’t have the power to back it up, and that’s not an issue with the motor Masumoto put together for it.  The totally rebuilt RB26 boasts an incredible 900ps of usable power; that’s a lot by any standard. 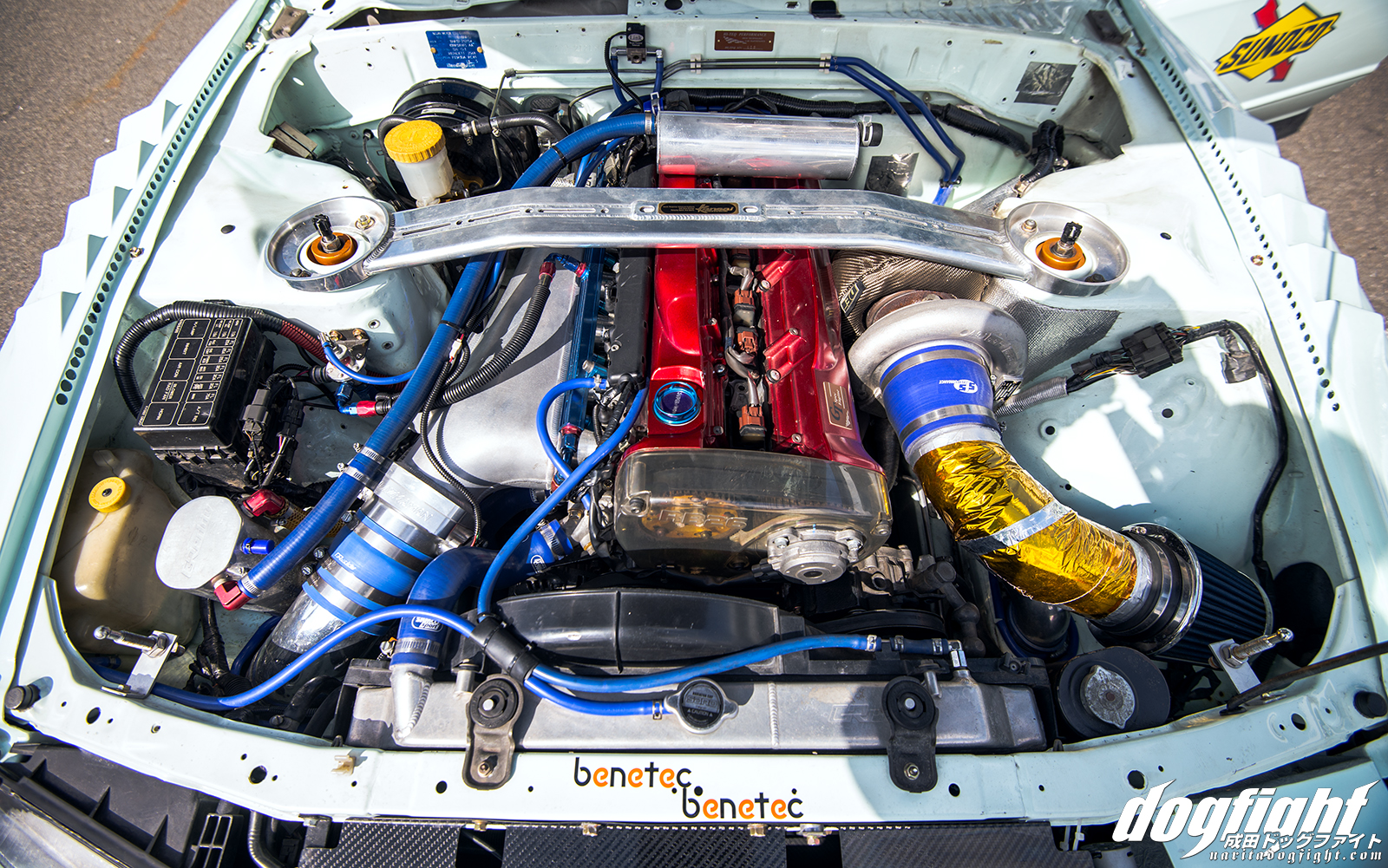 The RB was torn apart and built new from the ground up.  A Nismo N1 block is utilized to withstand the huge increase in power and has been outfitted with a Brian Crower 2.9 liter stroker kit; the N1 block negating all skepticism with block weakness behind running such a large increase in displacement. The head was fully built by VRK using HKS internals and racing camshafts.  Bosch 1000cc injectors provide a safe amount of fuel to keep up with the boost from the custom housed TF-08 Impeller turbine.  The LINK G4+ Fury tuned 900 horsepower package jammed into a 1350 kilogram car is no joke!  Sunoco and Kemitec fluids make sure everything is lubricated and running smoothly. 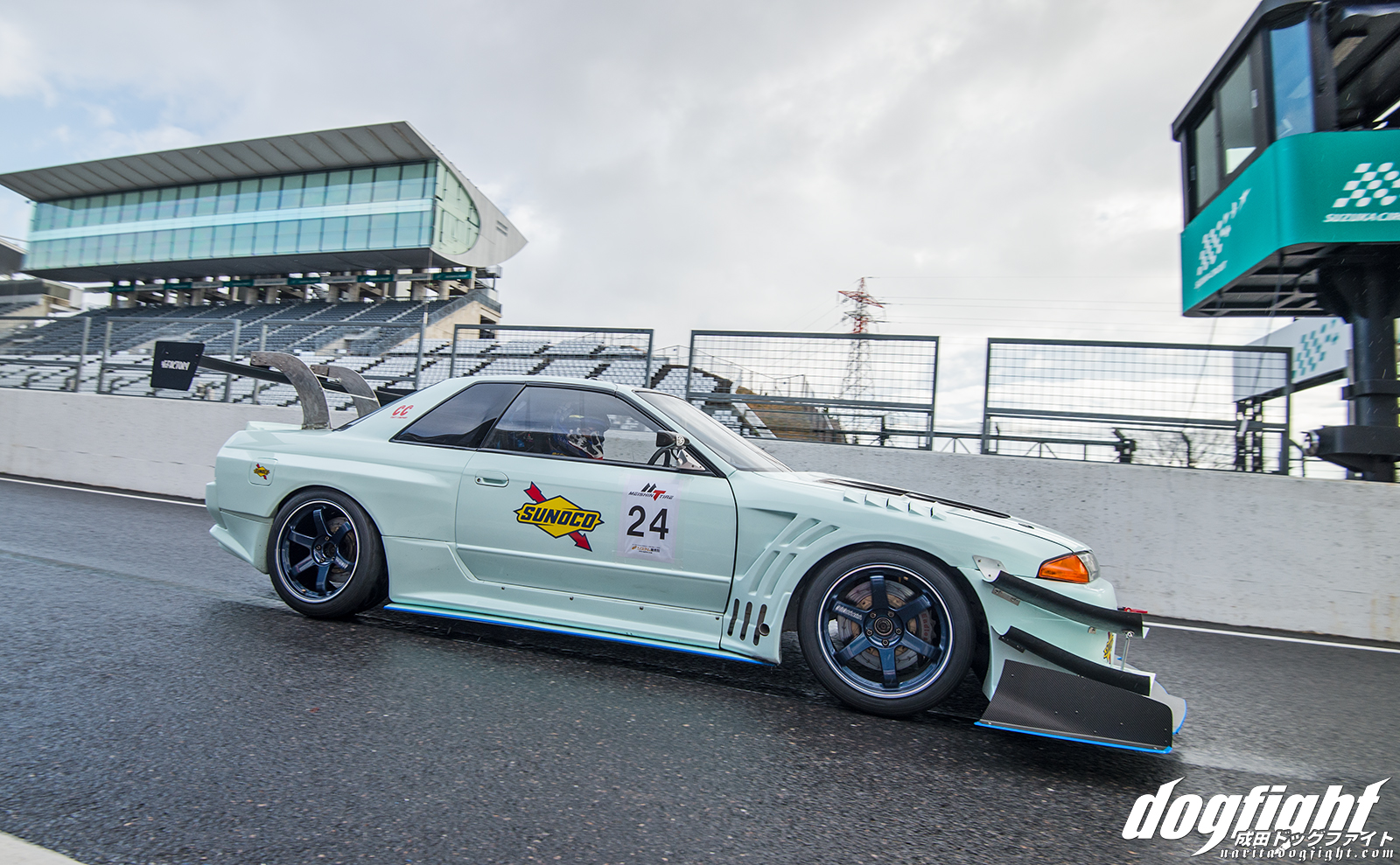 The car is equipped with a Hollinger 6 speed transmission, an AG-Y reinforcing kit. The OS Giken Triple Clutch & Flywheel take care of the forces from gear changes, and the ATS Carbon Differential and HKS drive shaft transfer all that power to the wheels.  Masumoto didn’t skimp on this build, and all the hidden components show that.  Very rarely does this care have issues on track, and it goes to show that quality matters not only at this level, but every level. 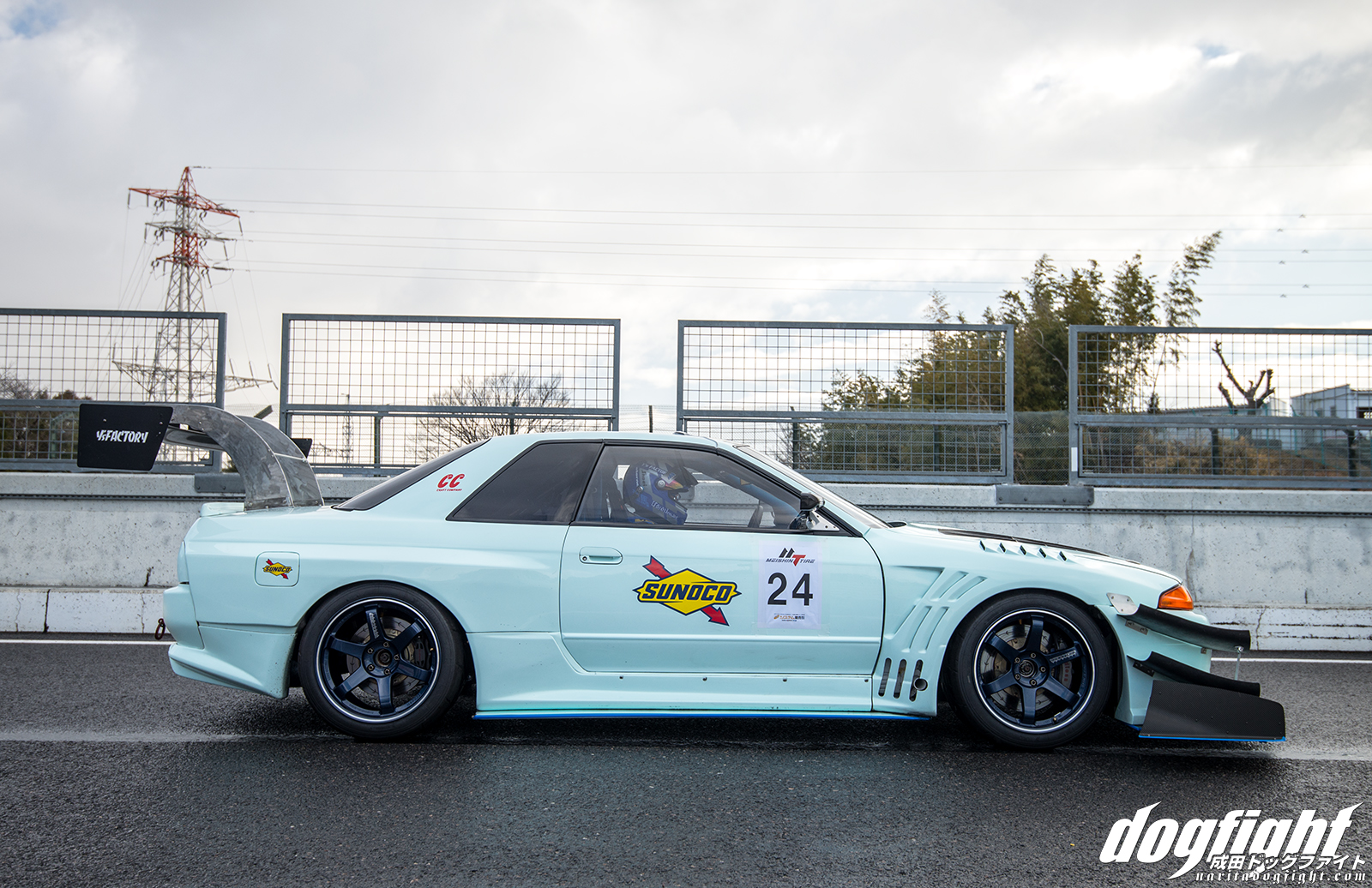 Sitting at just the right height to provide both looks and performance, the ADMIX spec Endless dampers mated with HAL springs were tuned to the optimum settings.  28k front and 24k rear springs may seem high, but fit the bill perfectly for the Japanese tracks and Masumoto’s driving style.  ADMIX roll center adjusters and various other suspension components assist the car in pitching and maintaining contact patch around the circuit. 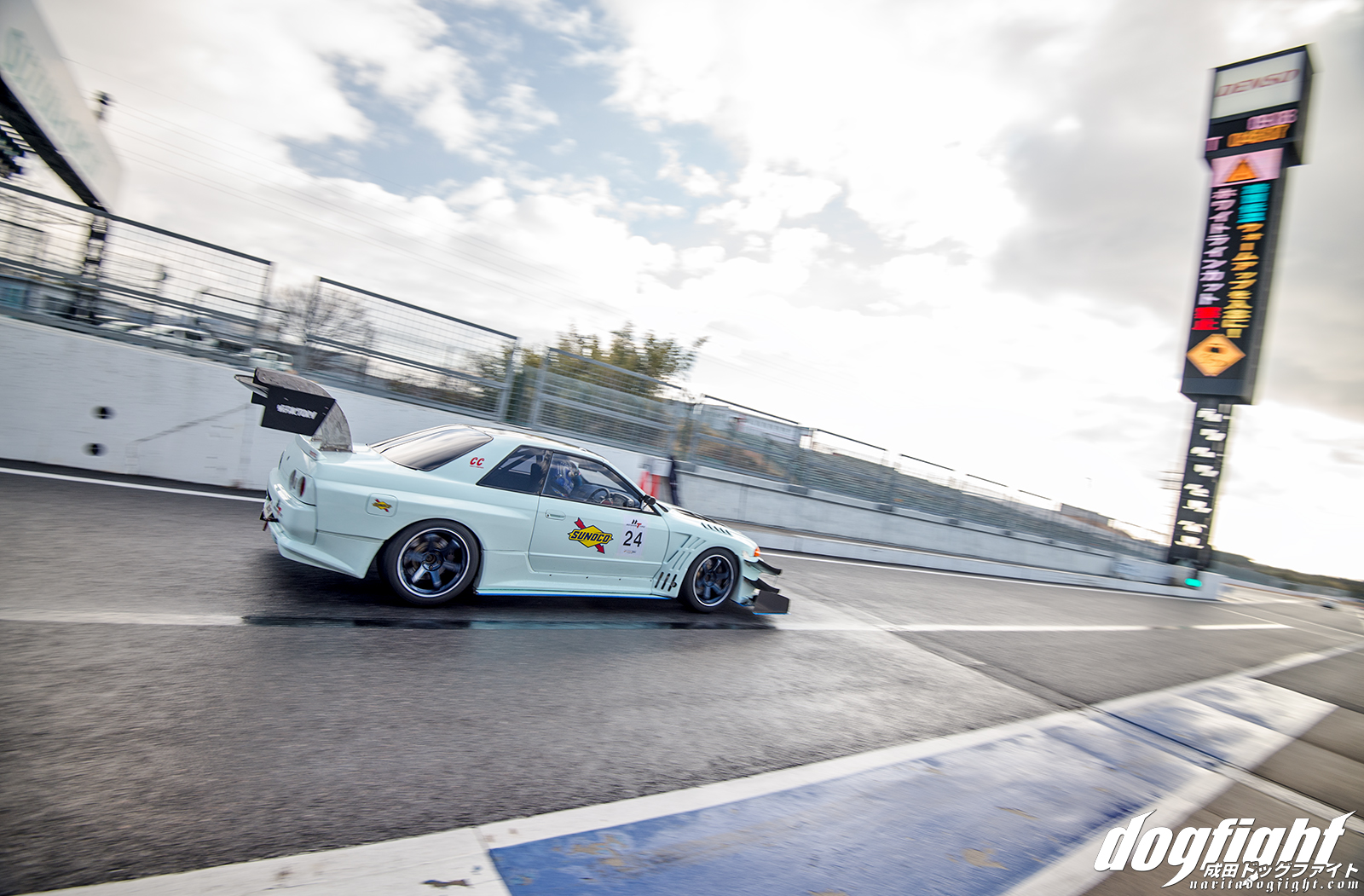 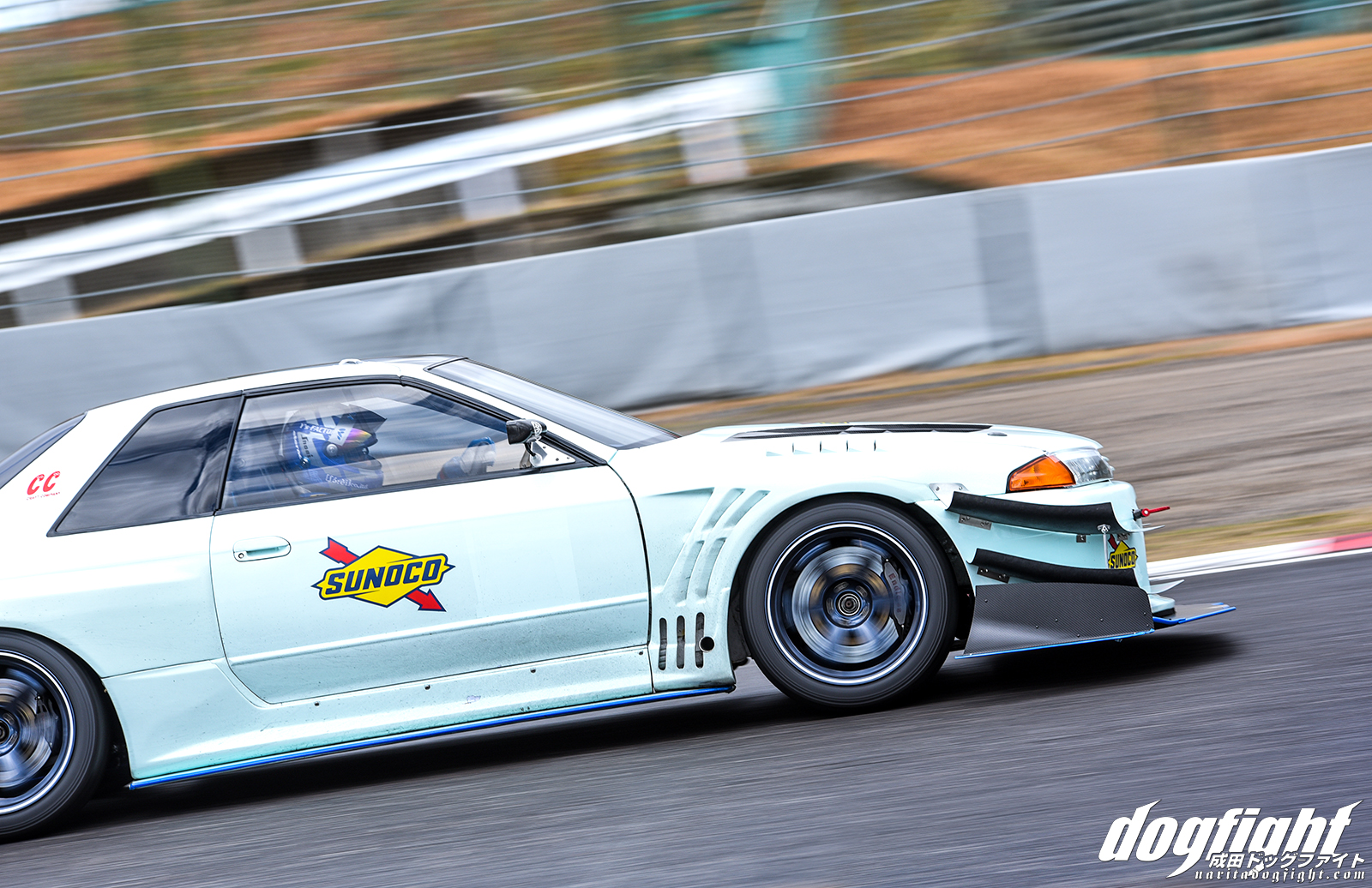 The Shorin front fenders and side skirts look a bit tame from a profile perspective.  Although the widened front fenders allow him to fit the 18x11J TE37RT’s without any rubbing issues, and give the 295/35 Advan A050’s room enough to do their jobs.

After talking to Masumoto about the build, I couldn’t help but feel a sense of accomplishment and pride in his words.  It’s easy to look at the builds in this sport and not think just how much time and money goes into making them perform as well as they do (maybe because my build is taking so long…).  It takes a true dedication to overcome the financial burdens and overwhelming time it takes to get to this point.  It reminded me to always try and look a little bit deeper than surface level…

…and if there’s any questioning of the car’s ability on track, I will note that Masumoto is able to take the 130R corner at Suzuka flat out; albeit not without some nail biting.  I wish continued success to Masumoto in both building his GTR and promoting the Attack series.