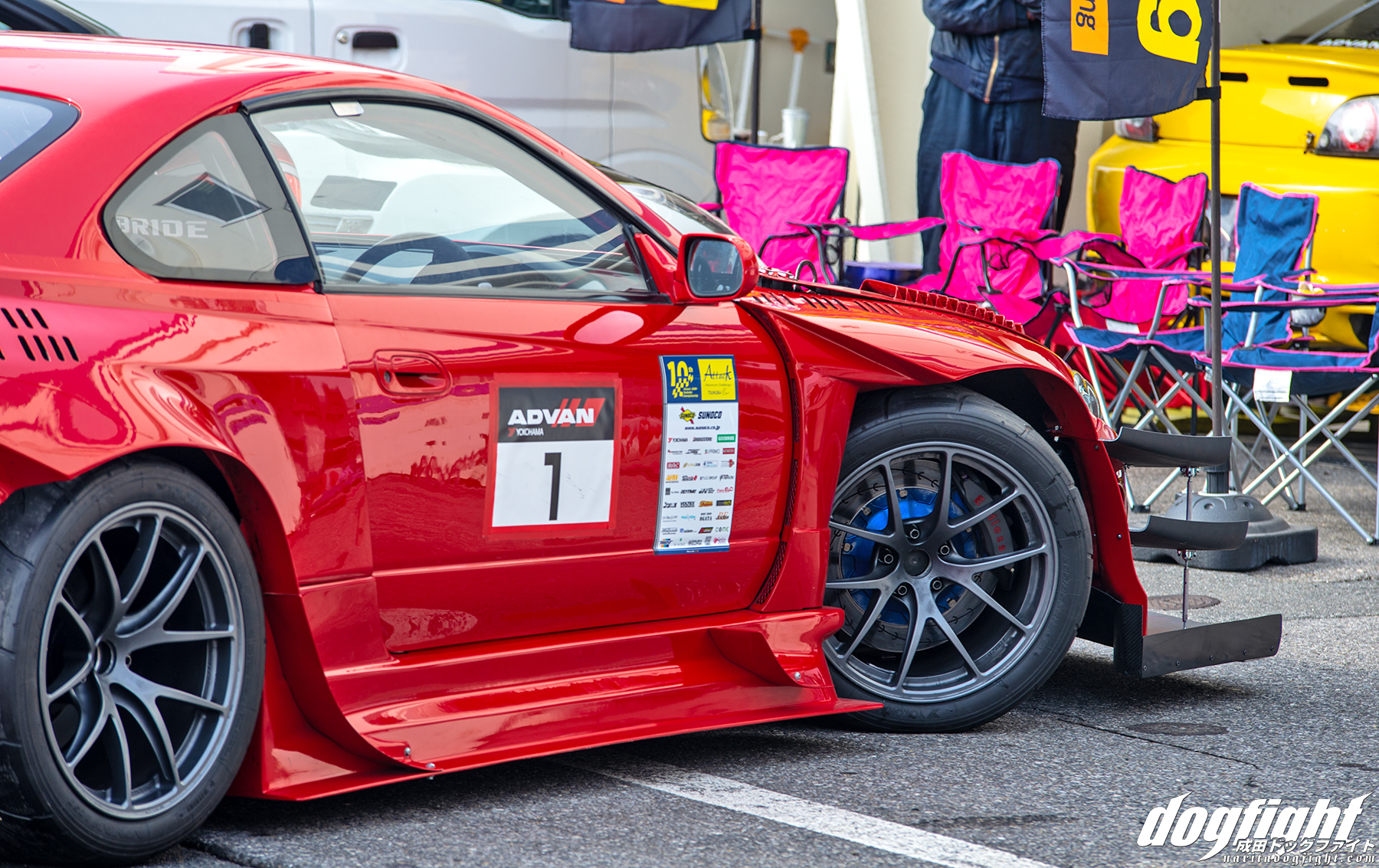 Easily the most recognizable Silvia in the paddock, the Friends Racing S15 has had quite the journey from it’s roots as a competitive D1 car.  The unique build is unlike any other in the field; in both looks and performance.  With a best time of 53’821 around the proving grounds of TC2000, Toru Inose is without a doubt among the frontrunners of time attack in Japan.  A couple years ago we caught Toru and the team at Tsukuba setting that personal best – but with a new goal in mind, the team has since gone back to the drawing board.

As is the current trend in the sport, the team first turned their attention to aerodynamics.  Over the past two years they’ve incorporated an entirely new front end and splitter, front canard setup, and new Voltex, triple-element rear GT wing.  Aside from the performance benefit of the upgraded parts, I have to say, the car looks a bit more balanced.  The contrast of the exposed carbon against the red paint breaks up the car a bit better than it’s previous version. 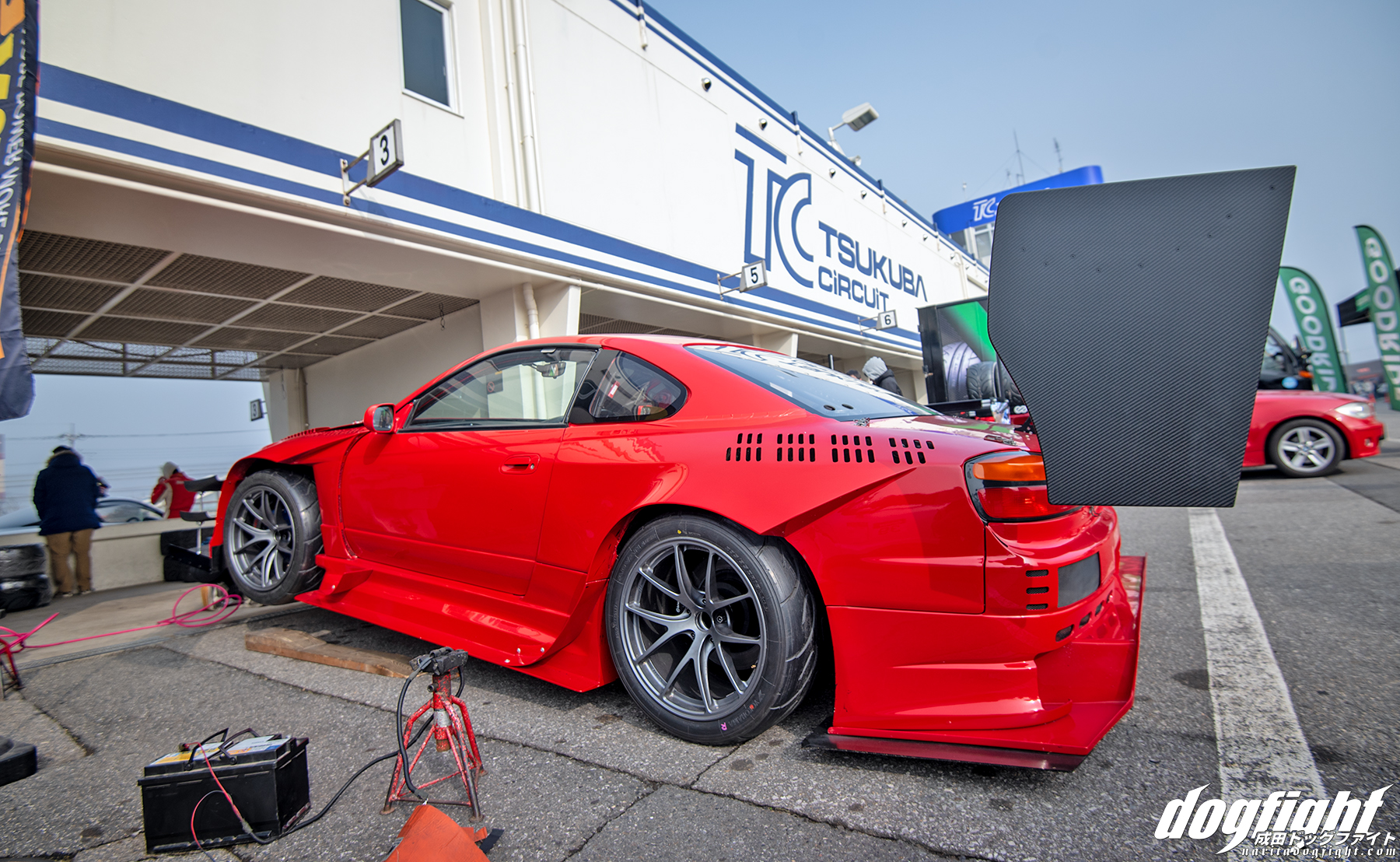 That wasn’t the only change for 2018 though.  As far as power delivery goes, the T88 that had resided alongside the SR20 has been ditched in favor of a new HKS GTIII-4R; the predecessor to the wildly popular T04Z.  With the new tune, the car will deliver about the same amount of power as before, but in a much more linear fashion.  Motec engine management ensures that the whole package works in a reliable way. 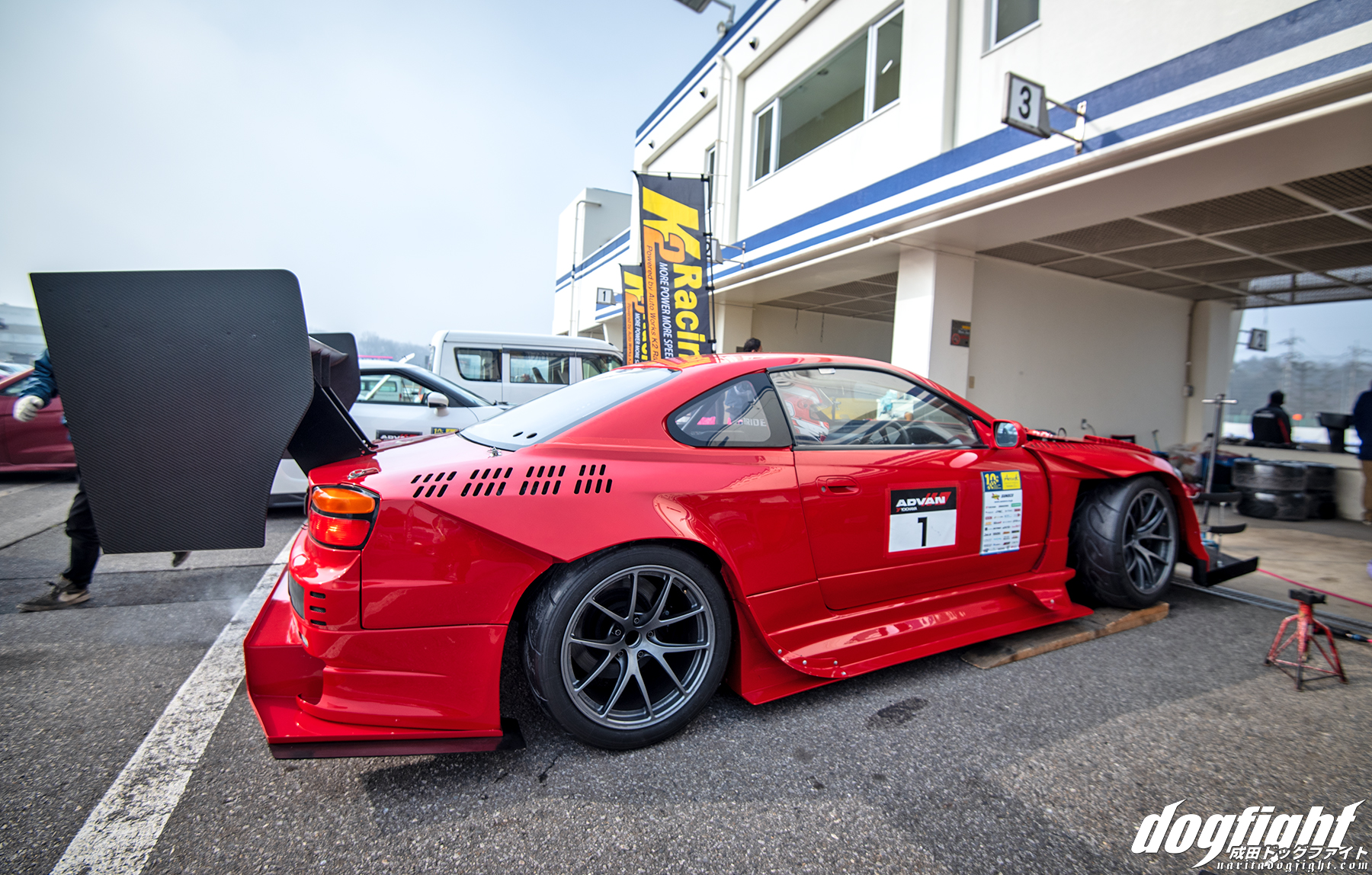 18×11 BBS wheels, wrapped in 295/35 Advan A050, adorn the corners of the Nissan and provide the grip that propels the car around every turn.

Hidden behind the lightweight wheels are Endless Monobloack 6-pot brake calipers and slotted rotors; an unparalleled amount of stopping power for the coupe. 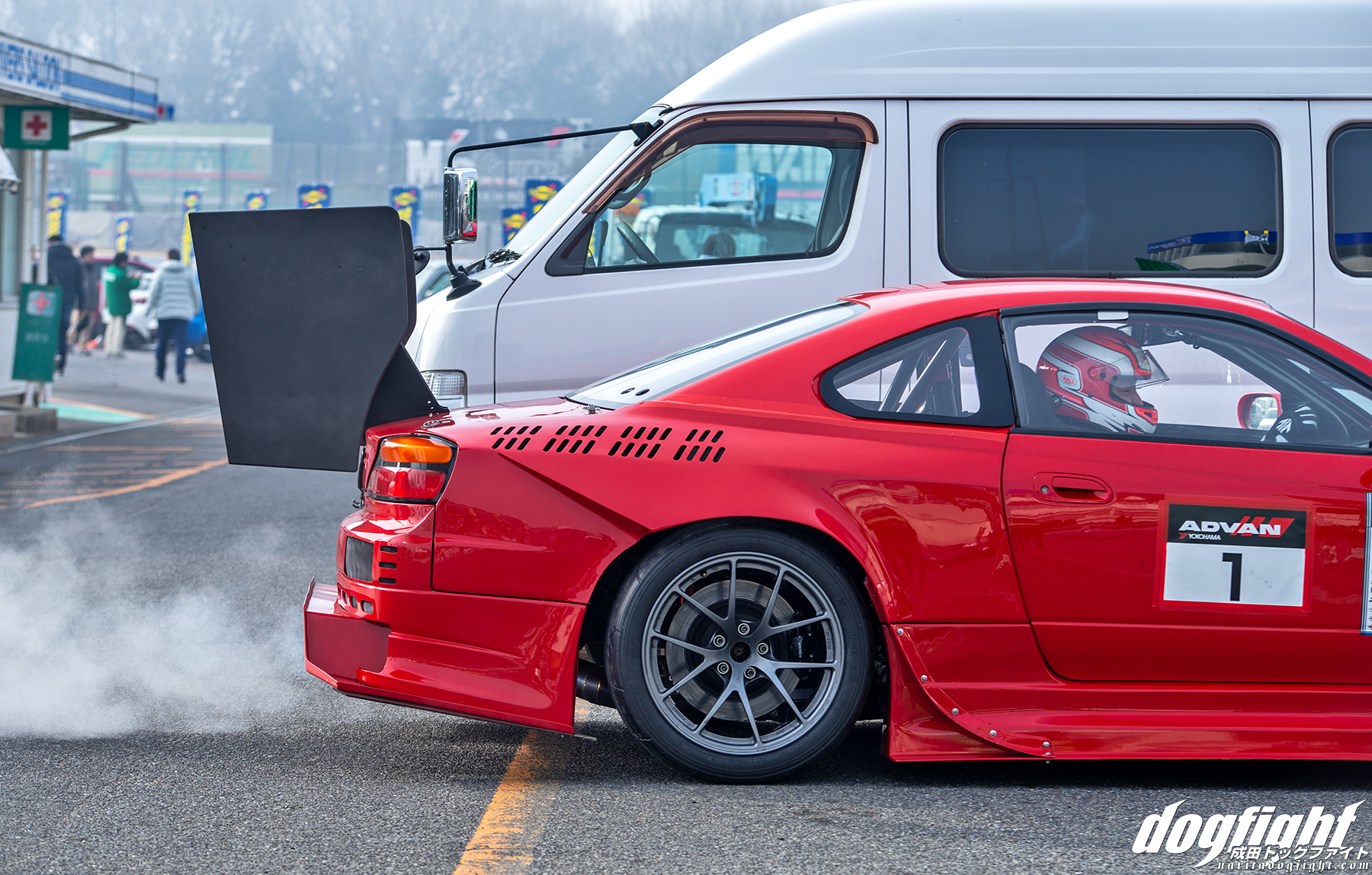 Heading out for the first session of the day at the February Attack Championship, Toru-san had high hopes for the new setup. 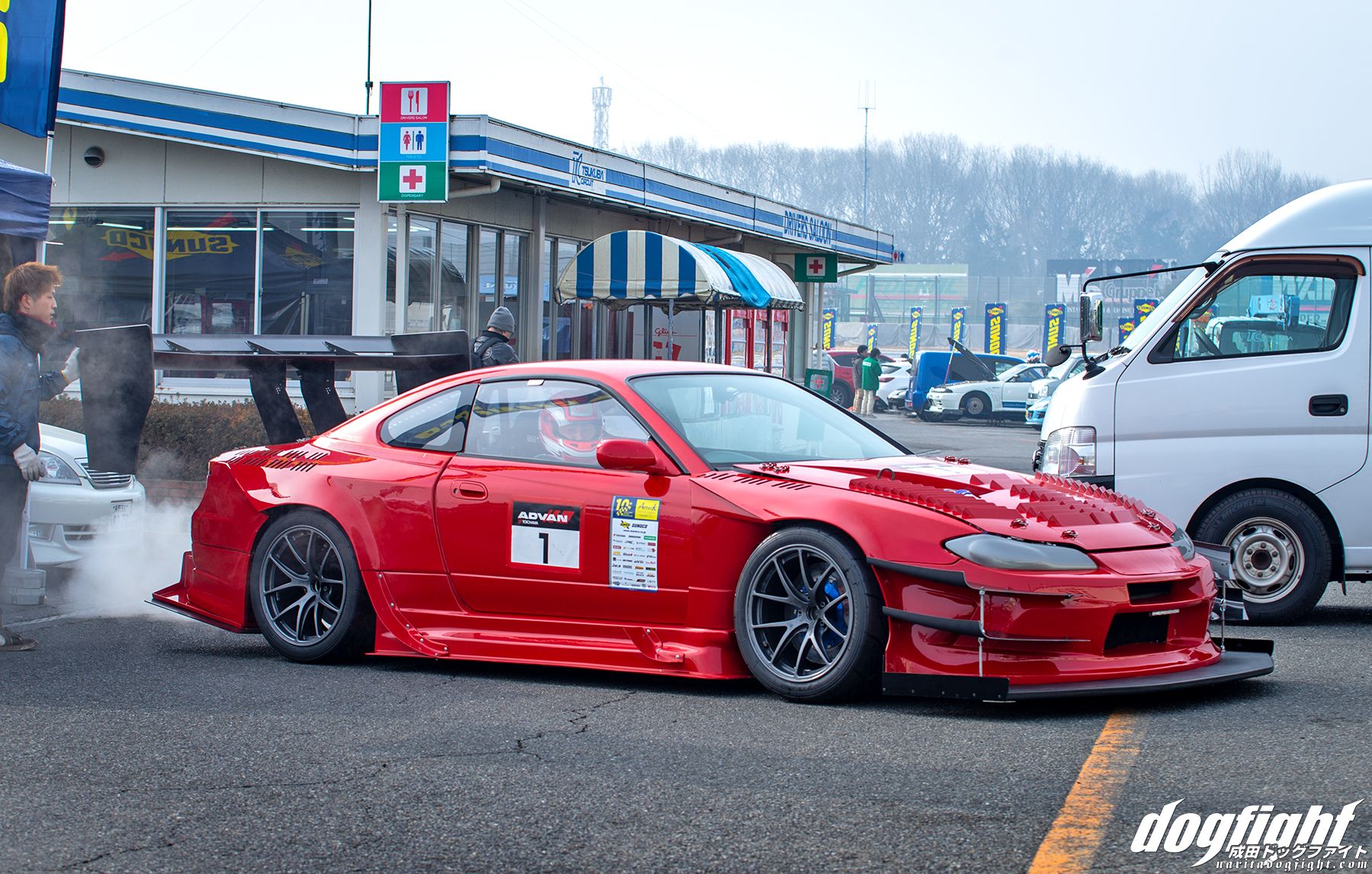 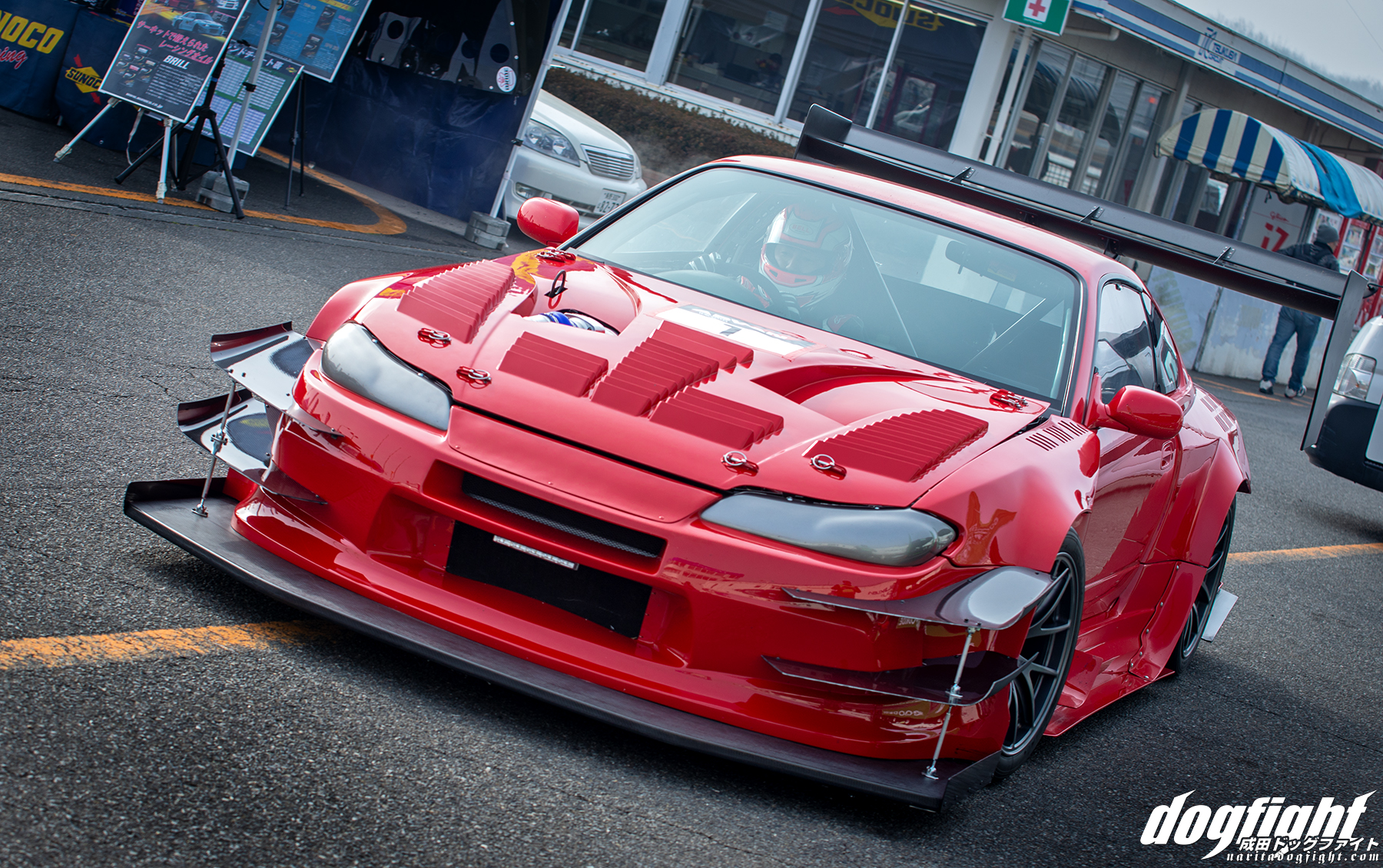 The front end looking much more refined than last we saw it. 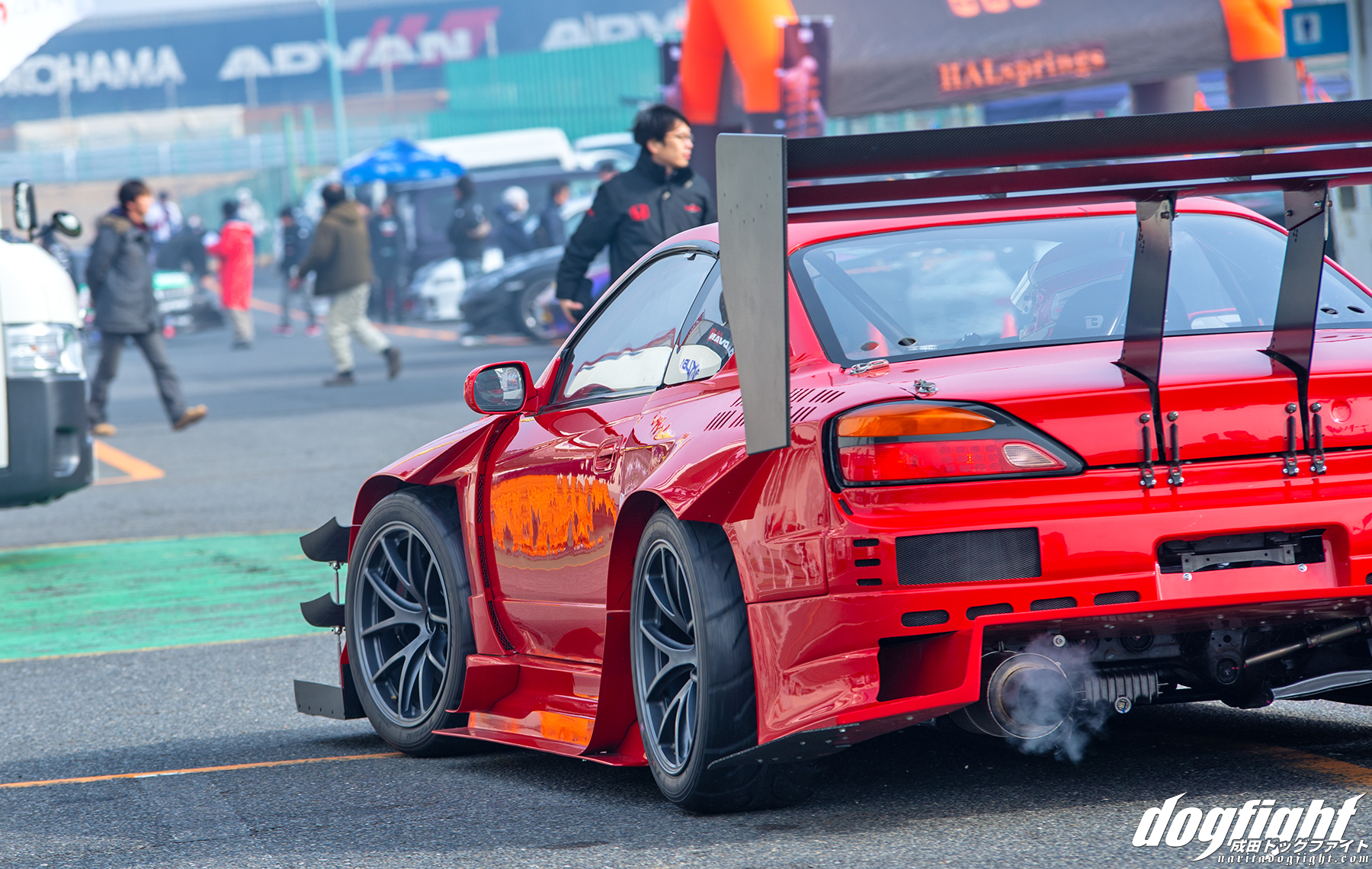 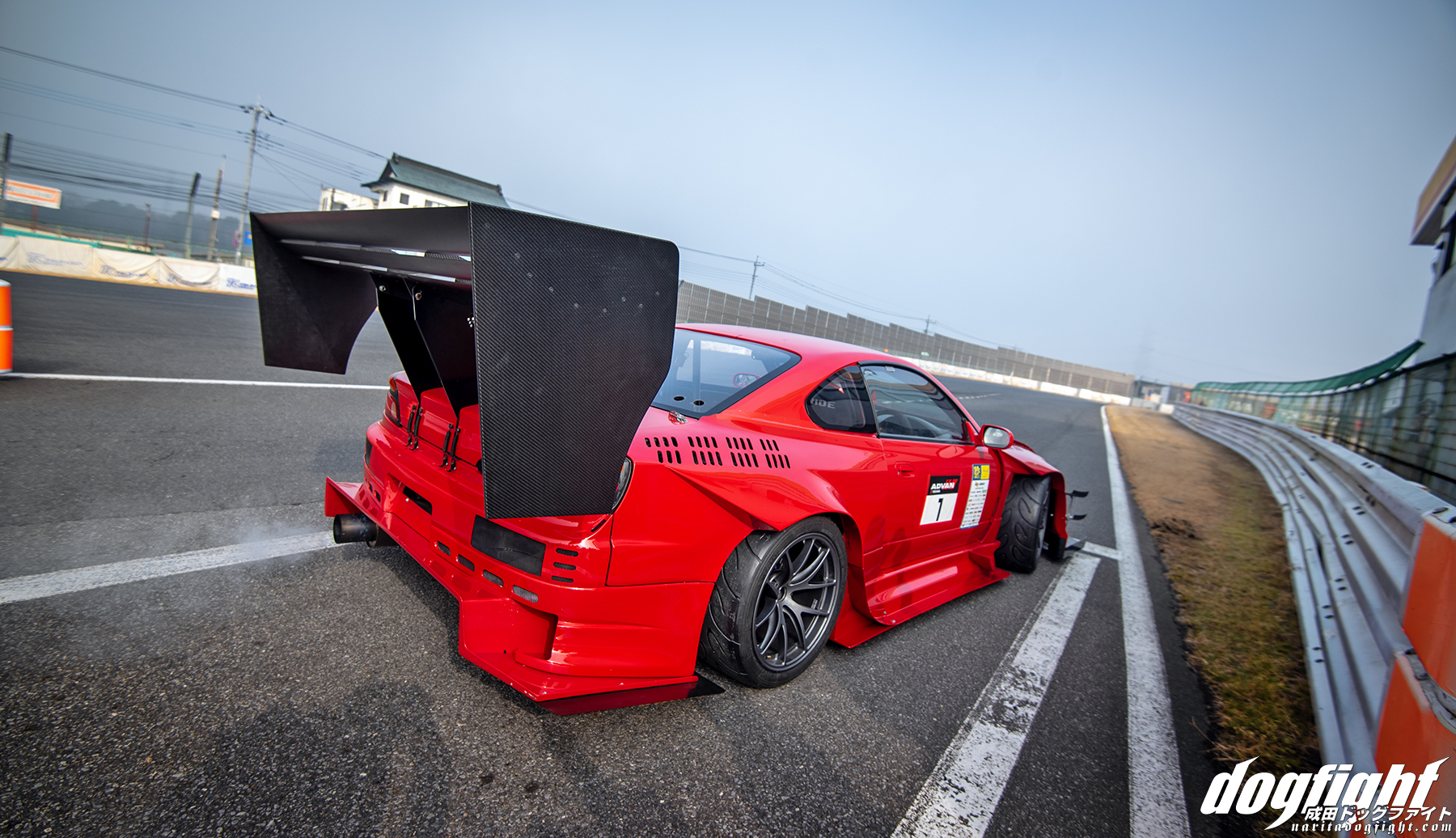 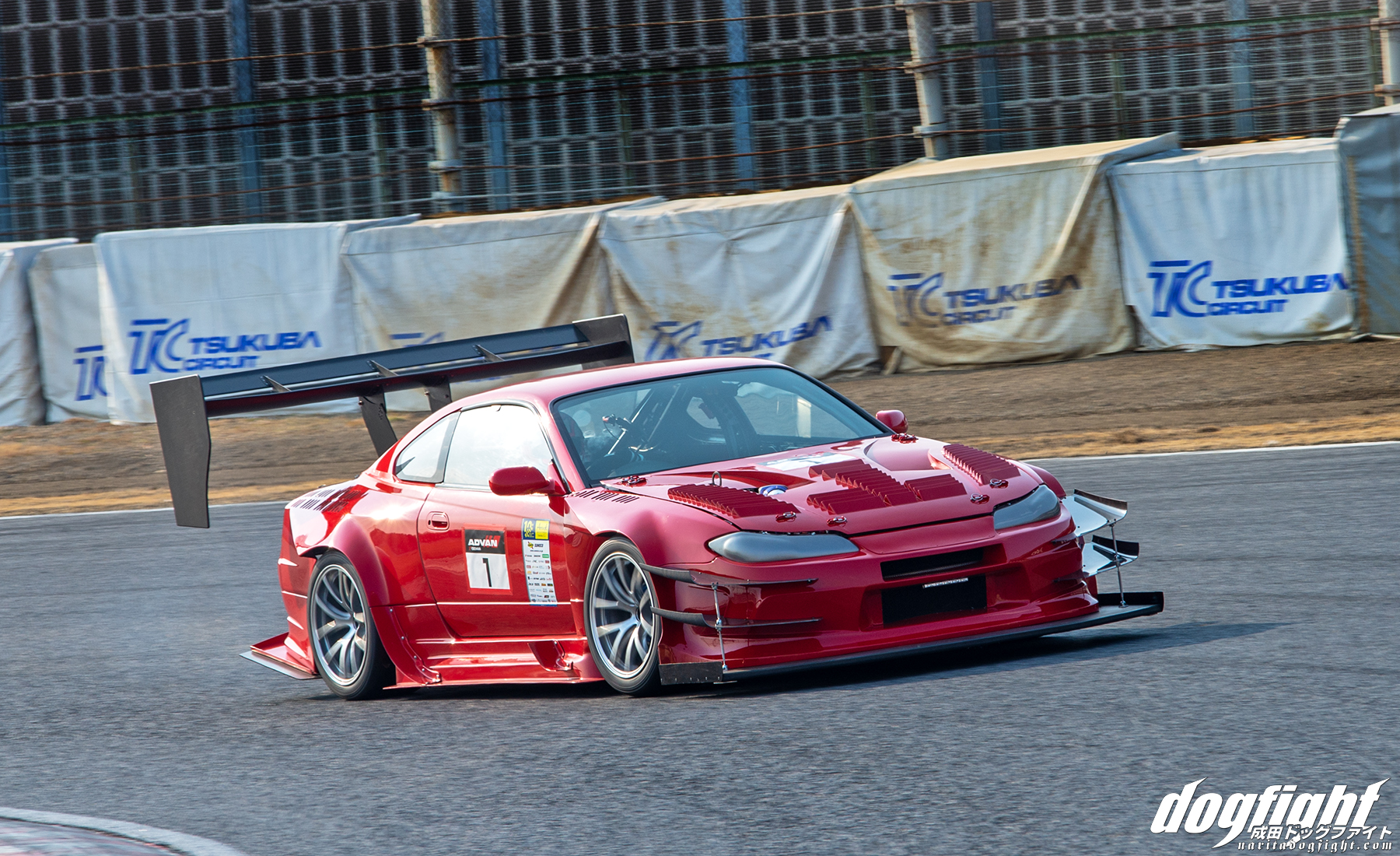 Unfortunately, they were a little off pace from their previous performance – if you can call a 55 second lap off-pace.  While they may have been testing, it’s possible that the conditions weren’t as prime as when they set their personal best.  There were a few other teams that are usually up front that also had an off day. 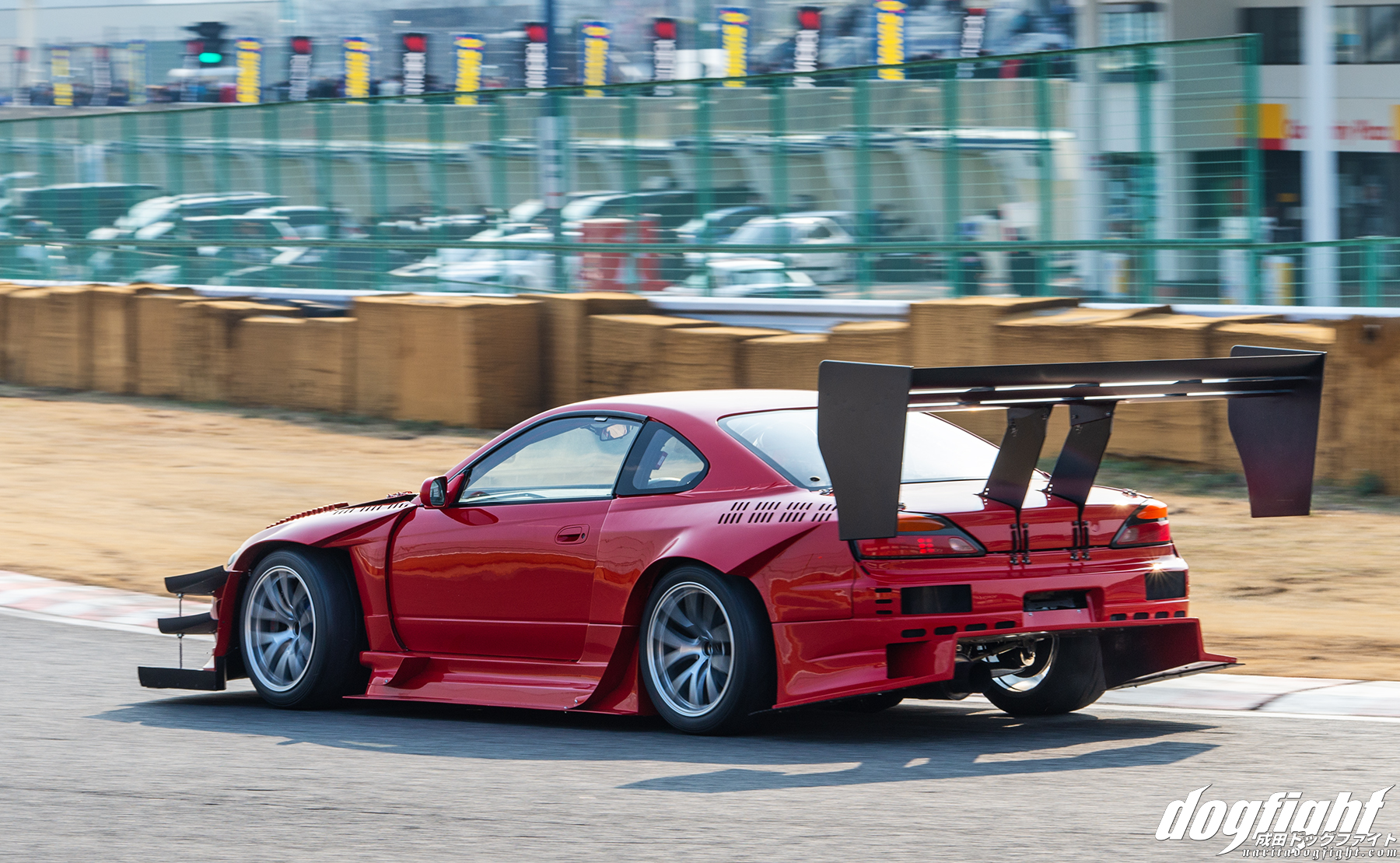 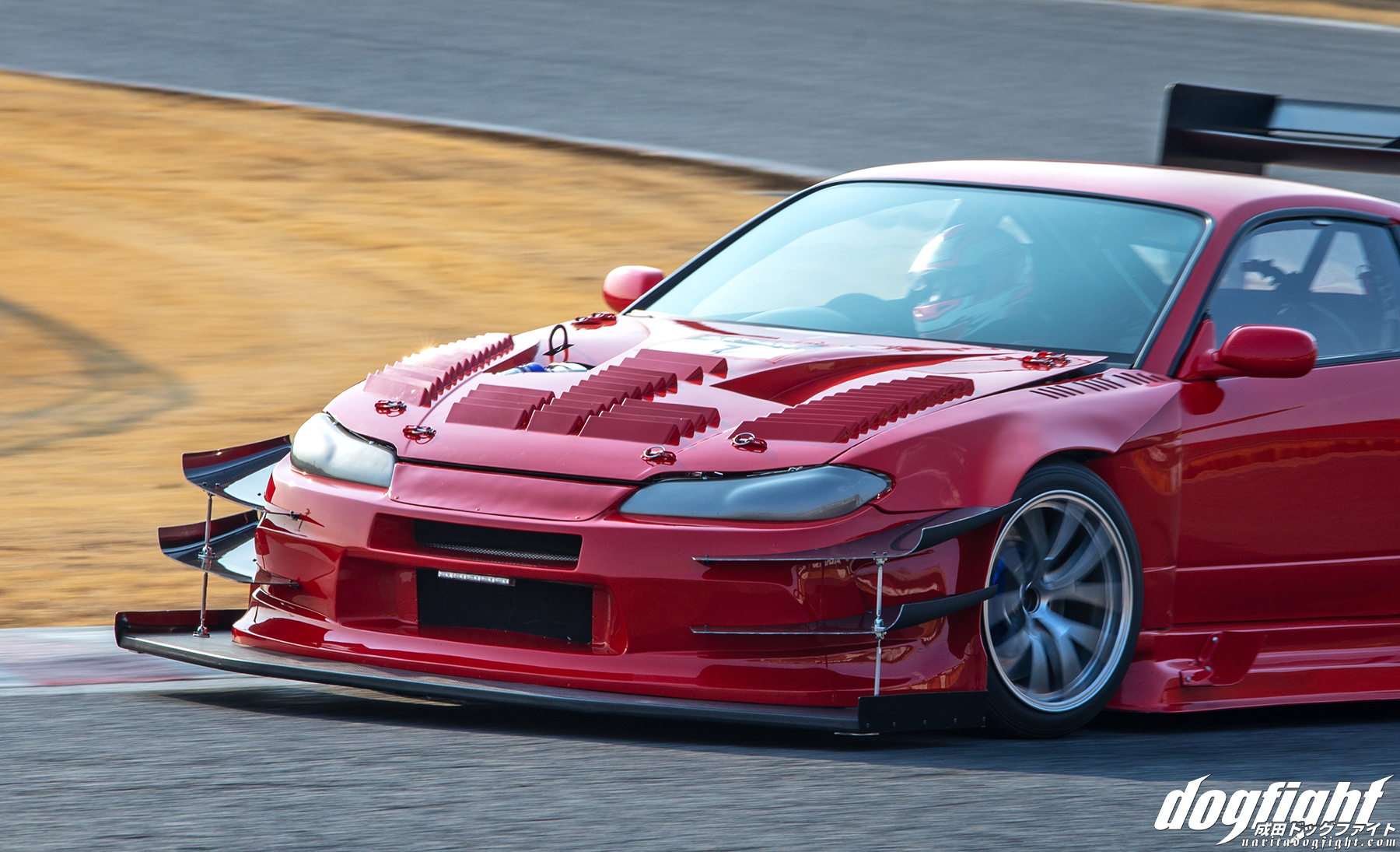 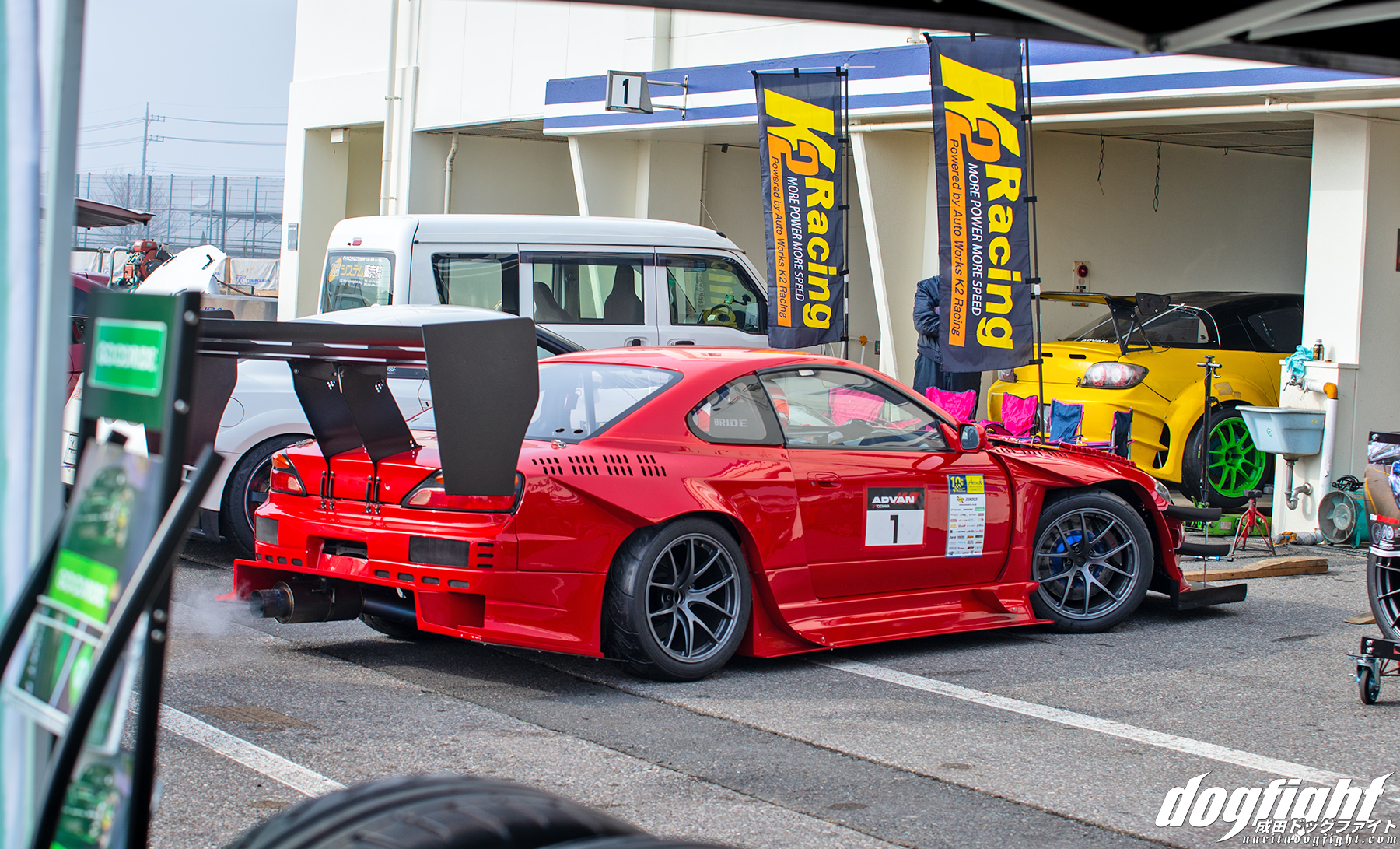 2019 is a new year, however, and I’m sure with a few more mid-year tests the car will be back in fighting contention.  Each second at Tsukuba is progressively harder to shave off, and while their goal of a 52 second lap isn’t too far off of what they’ve already accomplished, gaining that additional second is going to take some hard work.  If they can achieve it though, they’ll be setting the bar for everyone else to come behind them.  With Suzuki Under still standing in the 50 second range, a 2-3 second spread is quite remarkable considering that the Scorch S15 wears the crown of time attack (excluding the HKS TRB-03 of course).  Having the second fastest S15 in the game is nothing to shrug off – but what if there became two comparably fast S15’s in Japan?  You never know.  If anyone could do it, it’s Toru Inose and the team at Friends Power.