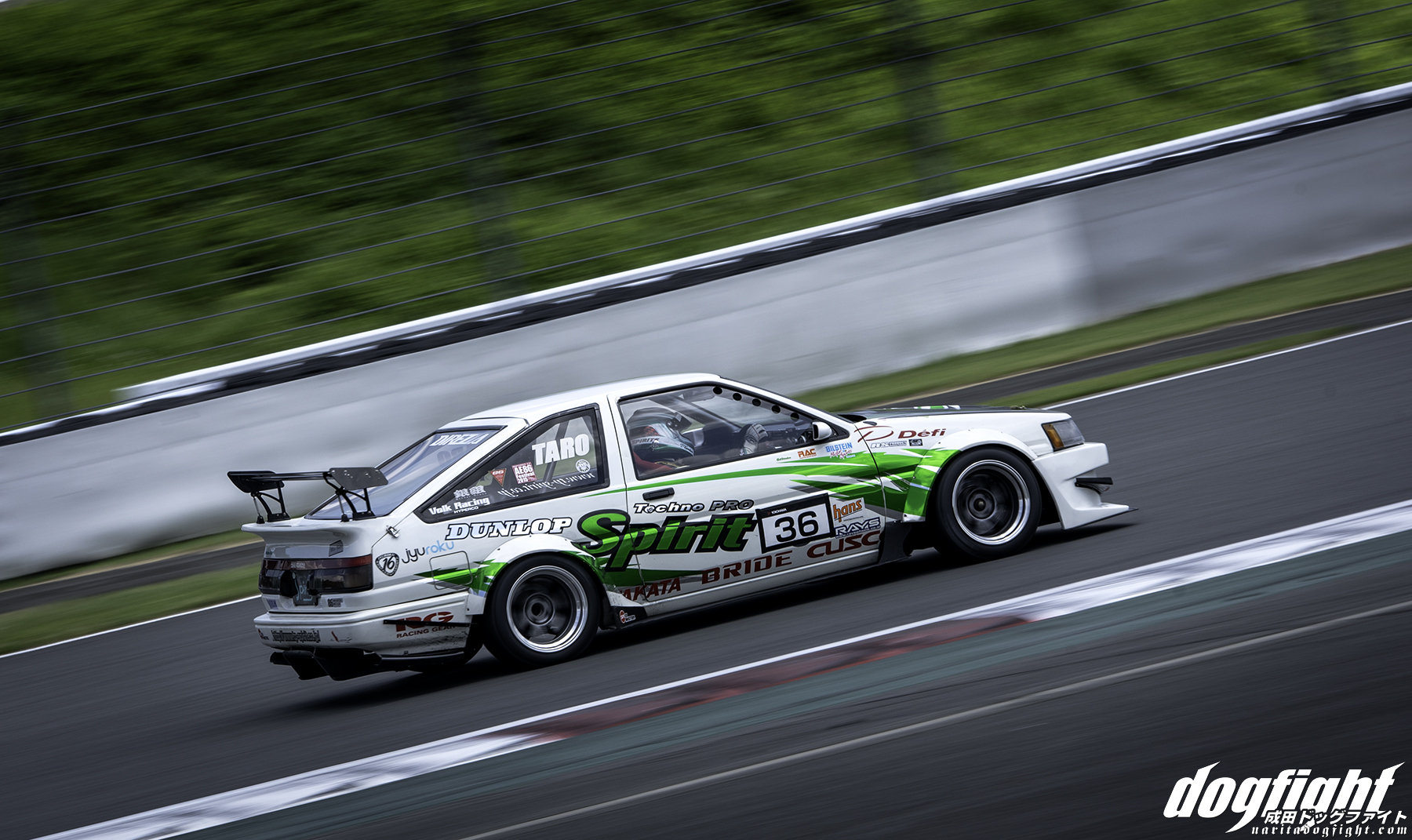 Since I’ve been back from Japan, I’ve become so absorbed in a new project that I haven’t really set time aside to sort through the images I took while I was there.  I was browsing Facebook this evening when I decided to reach out to Asano-san from Techno Pro Spirit to see how the testing went at Fuji Speedway.  He and Kumakura were out there testing a few changes to get ready for the upcoming N2 race Hot Version is hosting next month.

When I ran into Asano at Fuji, I admittedly didn’t recognize him at first.  Somehow, he knew who I was and we struck up a conversation about the day.  I embarassingly didn’t realize we had been friends on Facebook for years until he whipped out his phone and showed me.  I use Facebook to contact and keep in touch with a lot of people in Japan and this was actually my first time meeting him in person; so that was kind of cool.  Asano is the head tech at the Saitama based shop Techno Pro Spirit, and is for all intents and purposes a master of the AE86.

Kumakura wasn’t lapping around Fuji in the hot sun to try and set a fast lap, he and Asano were trying to gather as much data as they could on some new settings that were made to the 86.  The motor was retuned recently but had not yet been tested in N2 like conditions, so they took advantage of the Endless Meet to do just that.  It had been 5 years since I last saw this car and I was amazed at how little it has changed.  I guess that’s the benefit of racing in a spec series like N2. 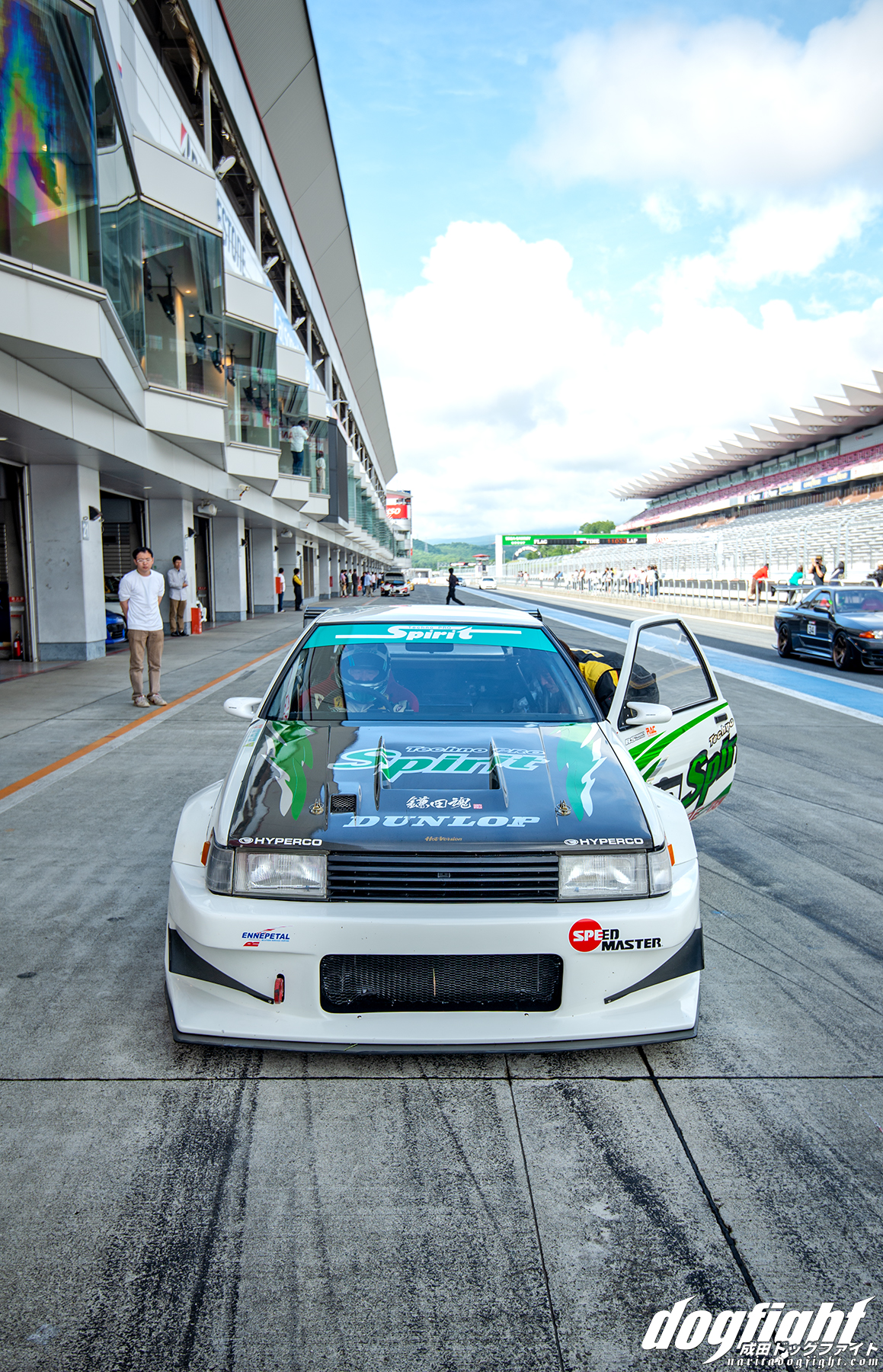 Asano assisting before going out on the first session. 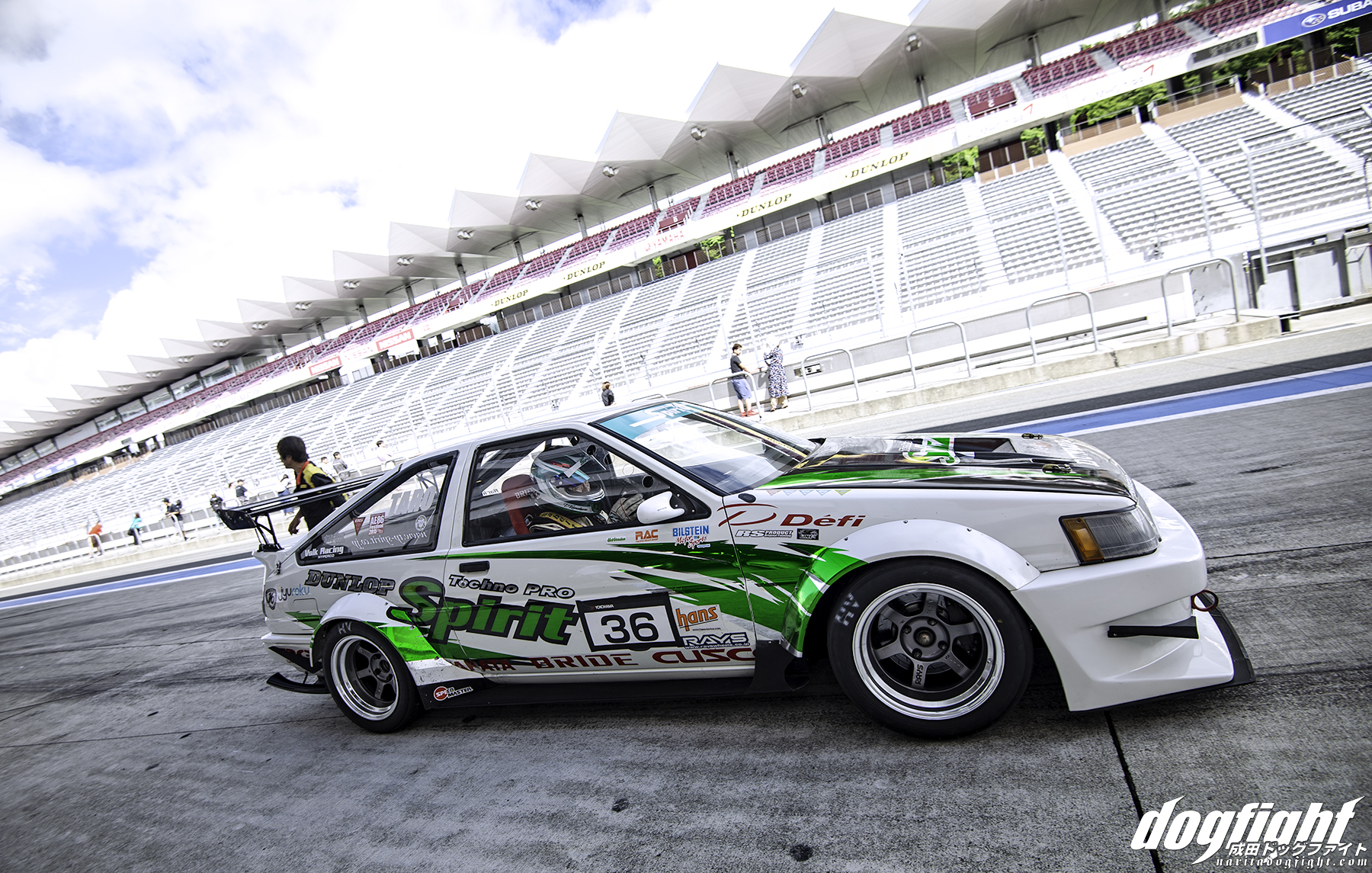 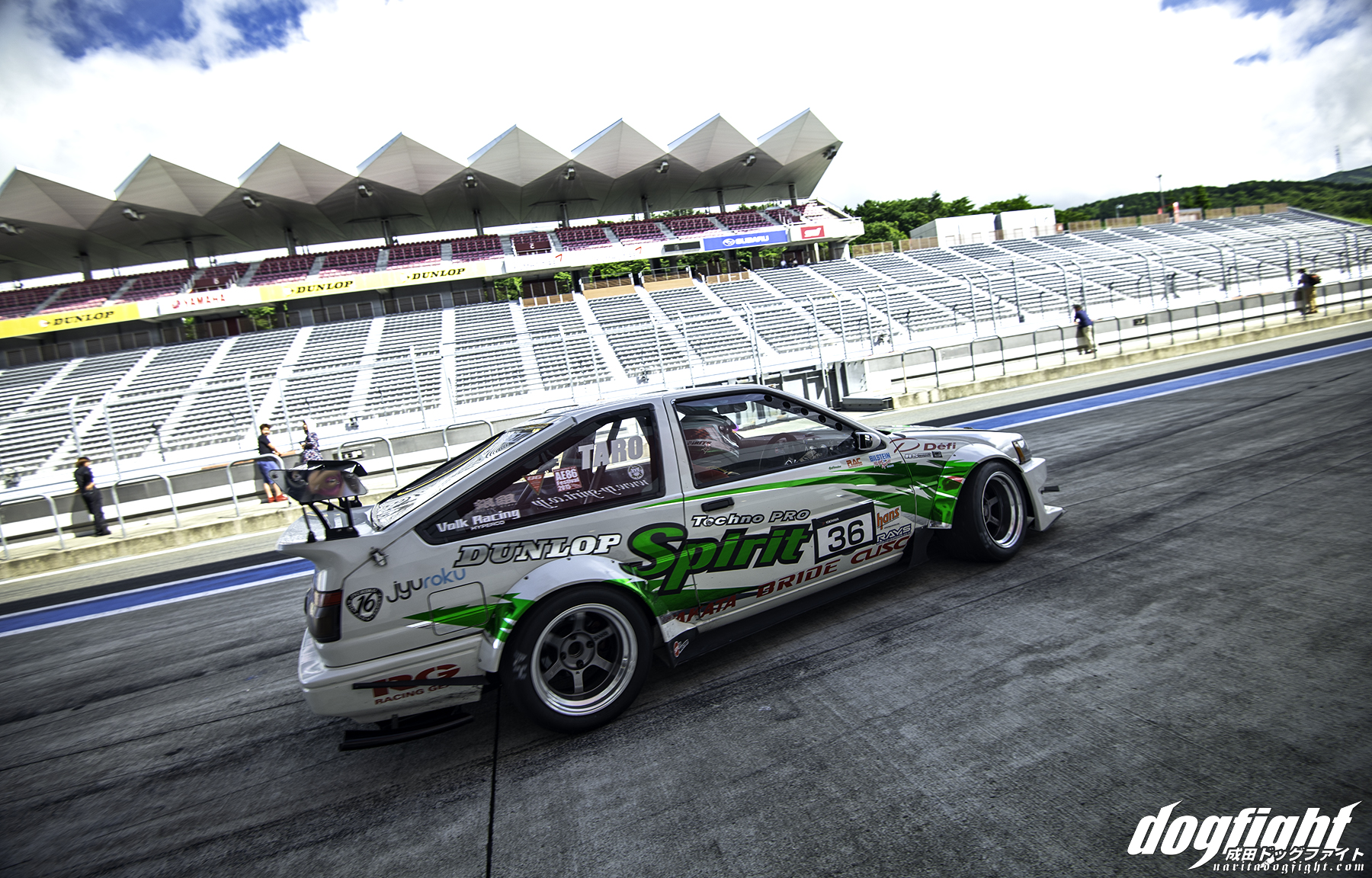 The car was looking, and sounding, very healthy out on track.  The reliabiltiy the team at TPS has gotten out of this car is nothing short of amazing.  Being able to beat on it lap after lap in this sort of heat is a testiment to how well they’ve worked out any kinks in the setup.  The benefit of not having to change the foundation year after year is that you have the opportunity to work out a permanent solution to any existing issues. 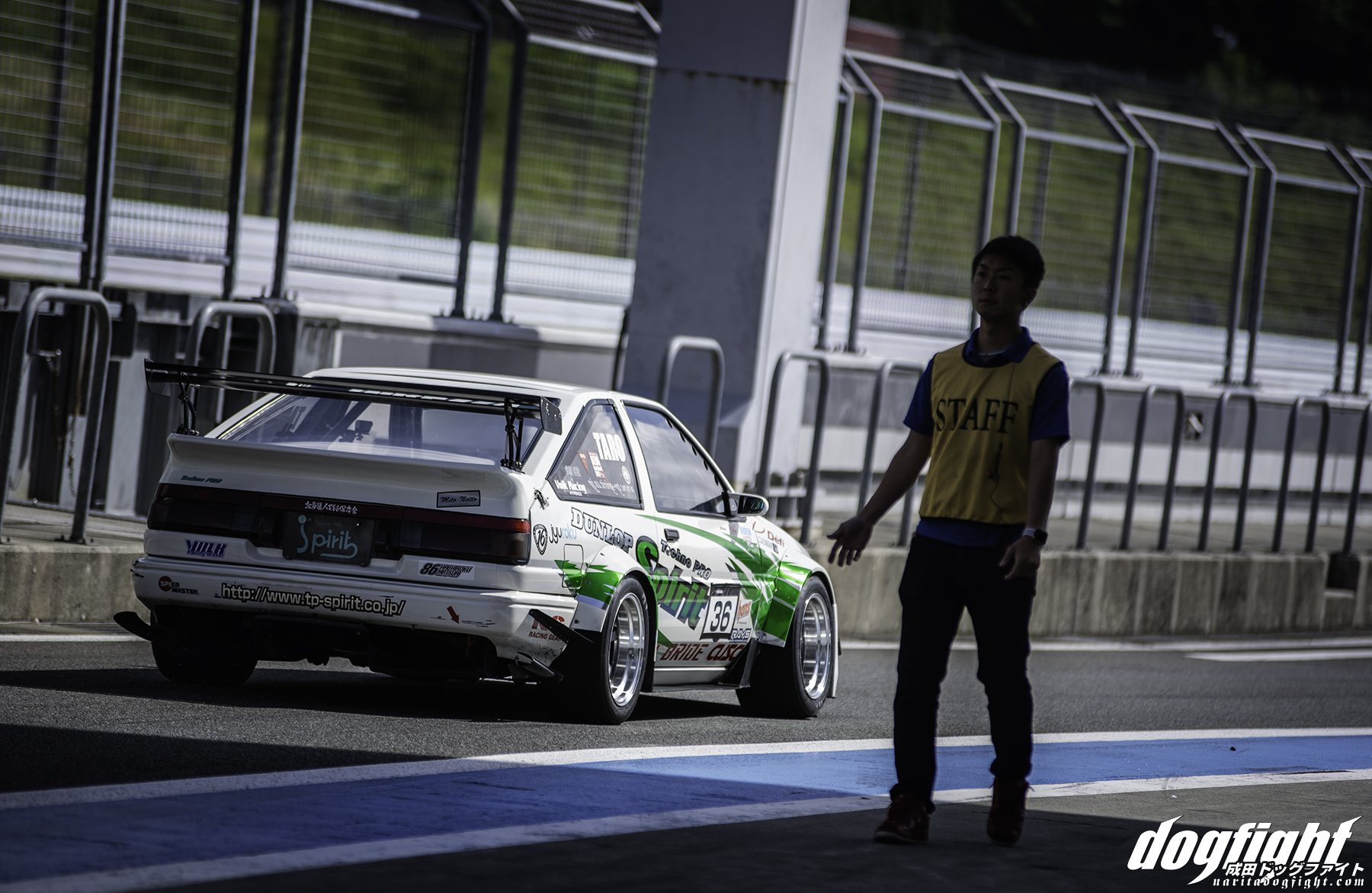 Heading out for the first laps – Kumakura was able to snag a sub-2 minute lap early on in the day before the temps started heating up.  A 1’59.6 was their fastest time for the weekend.  Rad considering what power levels they’re working with. 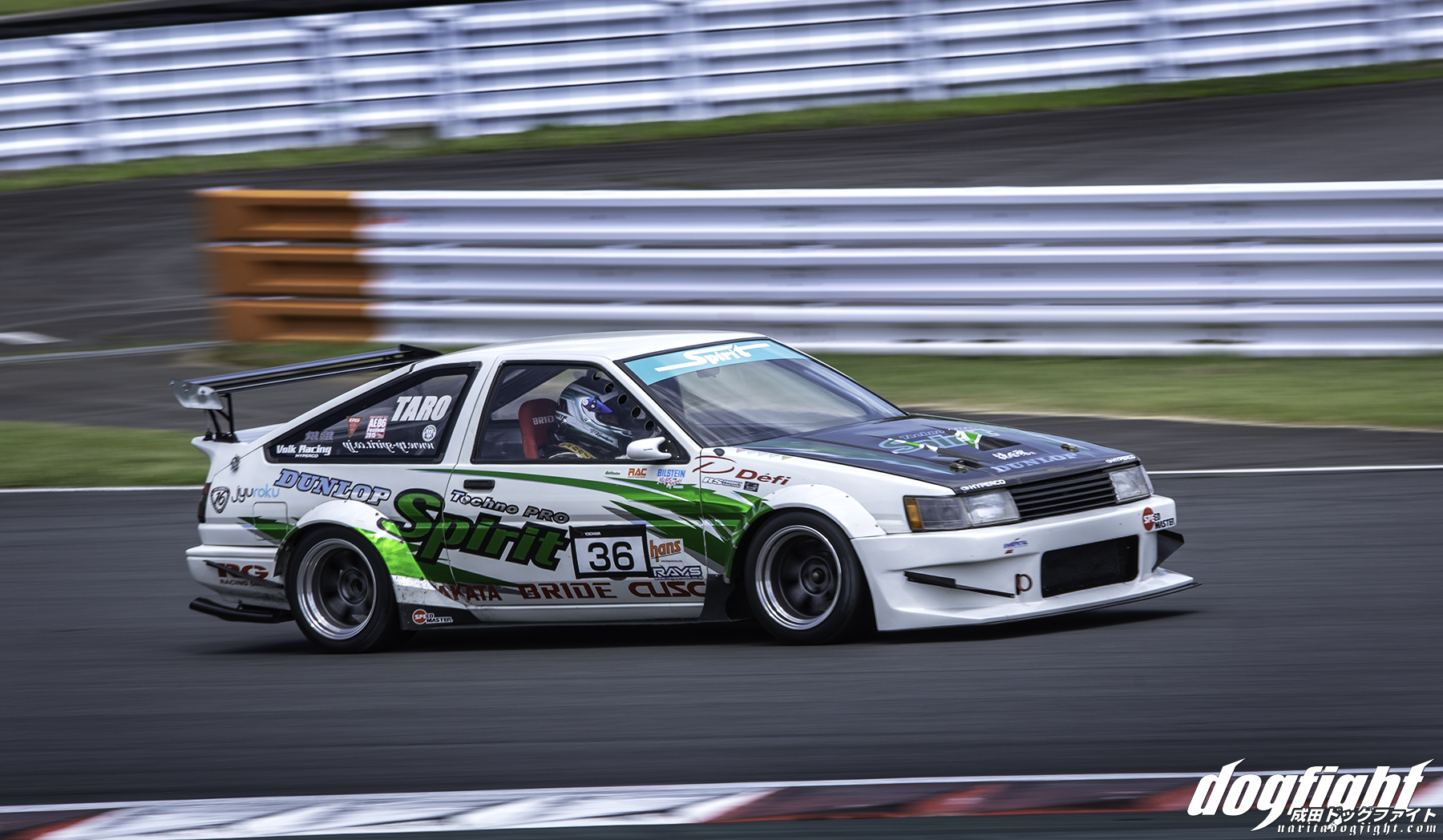 I posted a video from Fuji’s front straight to our Facebook page that Asano had shared. It’s a good clip to hear the exhaust note of the car.  Mostly due in part to this… 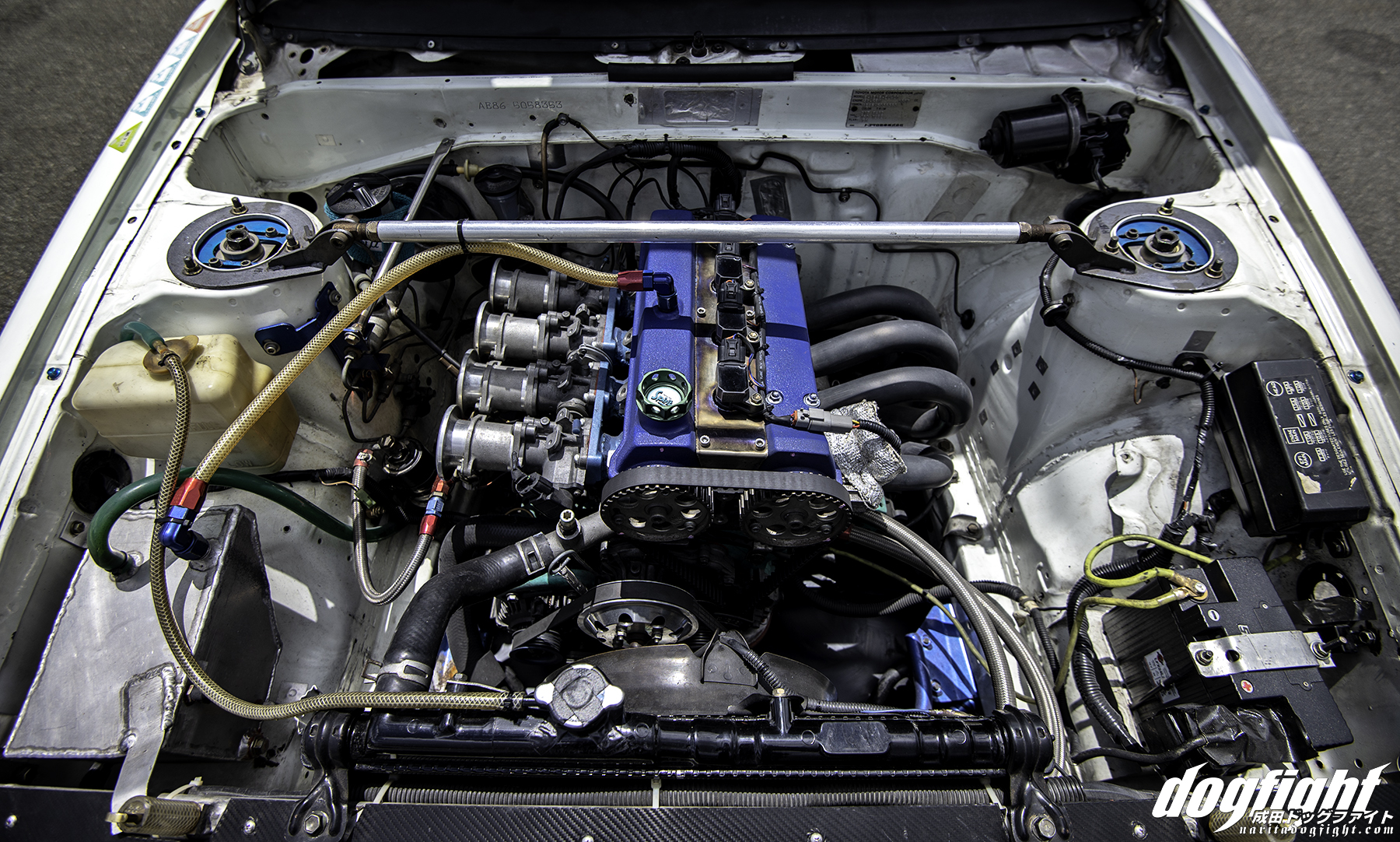 The car’s fully built, N2 spec 4A-GE motor.  My friend Kemritte and I were talking about this motor and he was quick to point out a couple really cool things that I completely looked over.  Mostly because I have no idea what I’m looking at (because it’s not a Honda).  Asano mentioned that the coil pack conversion is from a MR-S, and they use a AE92S / C pickup coil.   Inside the 1.8 liter beast is are a set of Tomei camshafts, TRD reinforced valve springs, a balanced BC crankshaft, BC pistons with Arrow connecting rods, and an TPS reinforced oil pump gear. 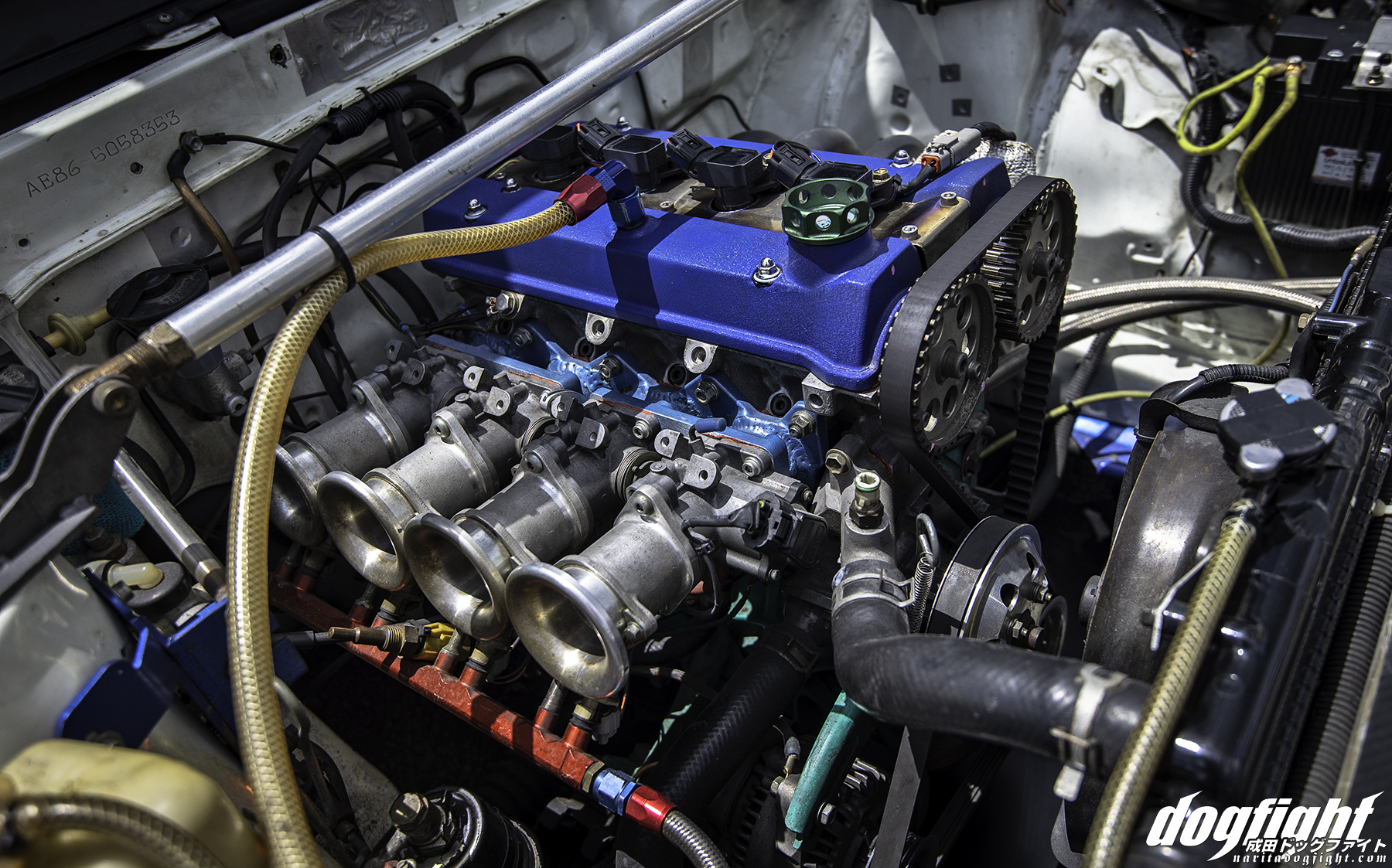 The ITB’s that are on the motor are actually a completely custom setup for a 20v, while the motor is of the 16V variety.  The light blue plate you can see between the head and throttles serves an adapter plate.  The fuel rail has been moved and mounted below the manifold, and you can see that the injectors feed in from the bottom area.  This is a TODA peice that’s been retrofitted to the manifold.  The throttles are actually remodeled AE101 peices. 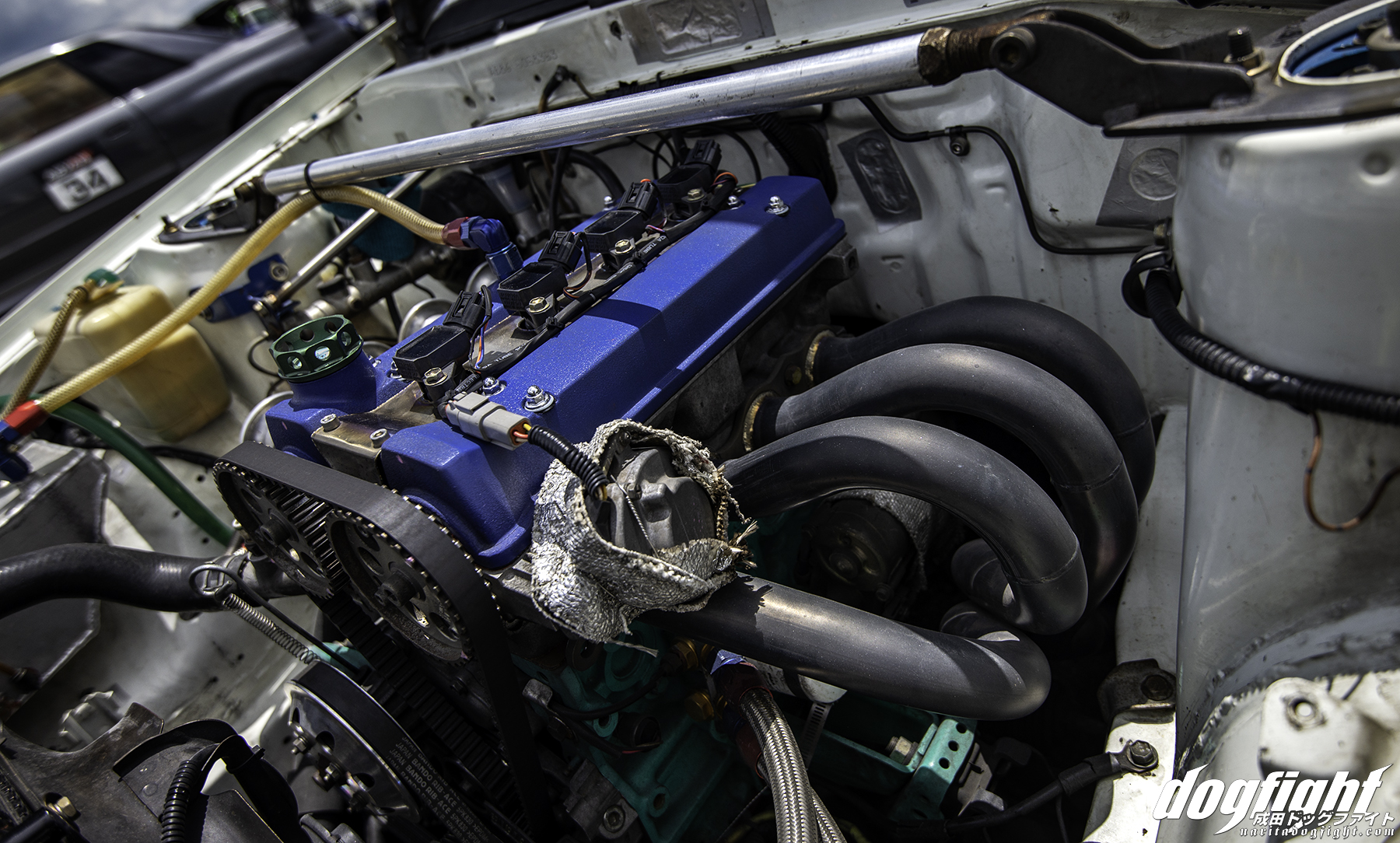 Cool looking exhaust manifold feat. dangerously close distributor that’s wrapped in a heat shielding towel as it literally sits atop the header; what an odd design.  Although it must not be that much of an issue if this thing runs flawlessly.  The exhaust manifold is a one-off peice made from Titanium that the boys at TPS made in-house.  The settings they were testing during the event were all made through a LINK ECU. 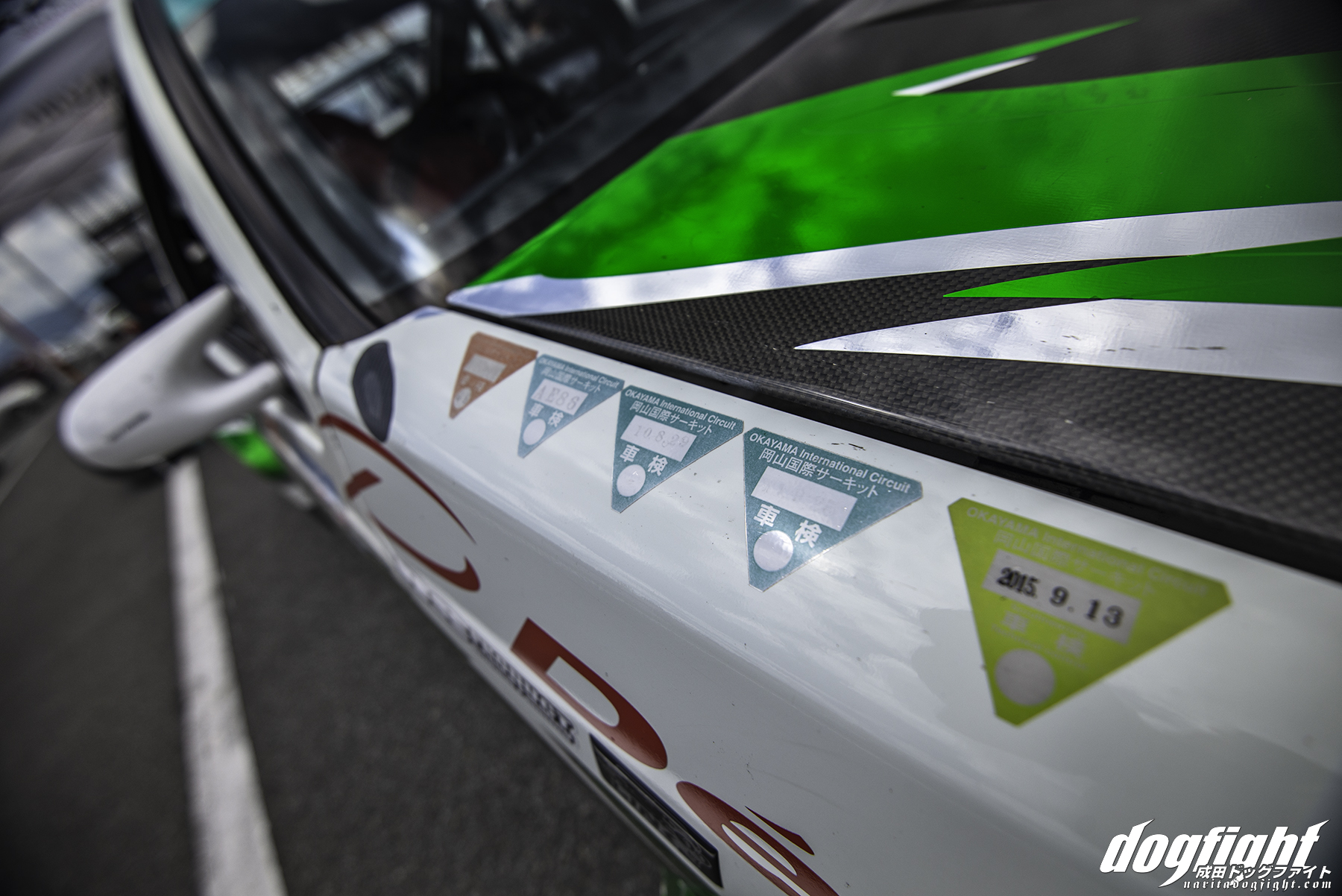 The car is riddled with event decals from prior events. 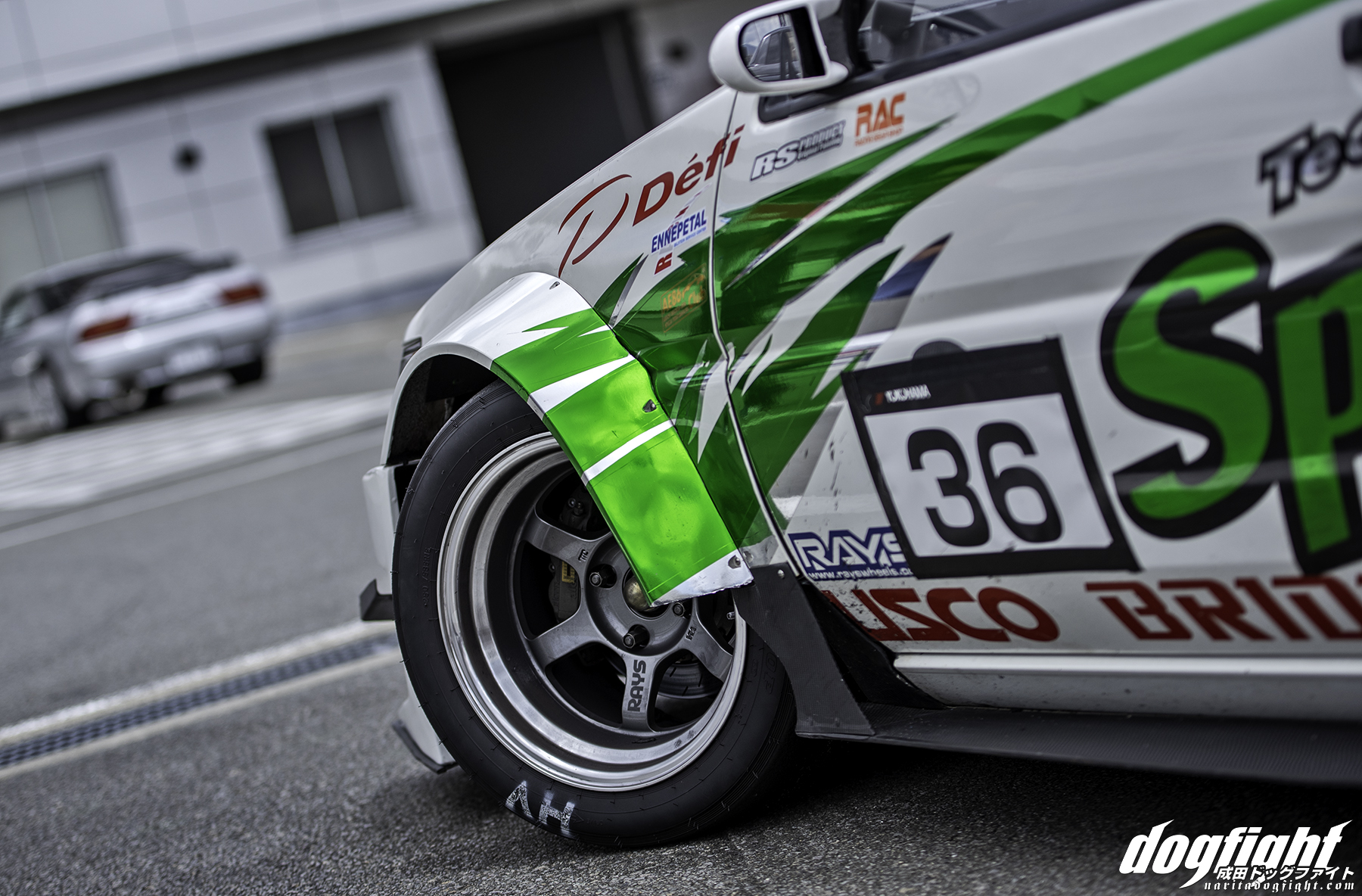 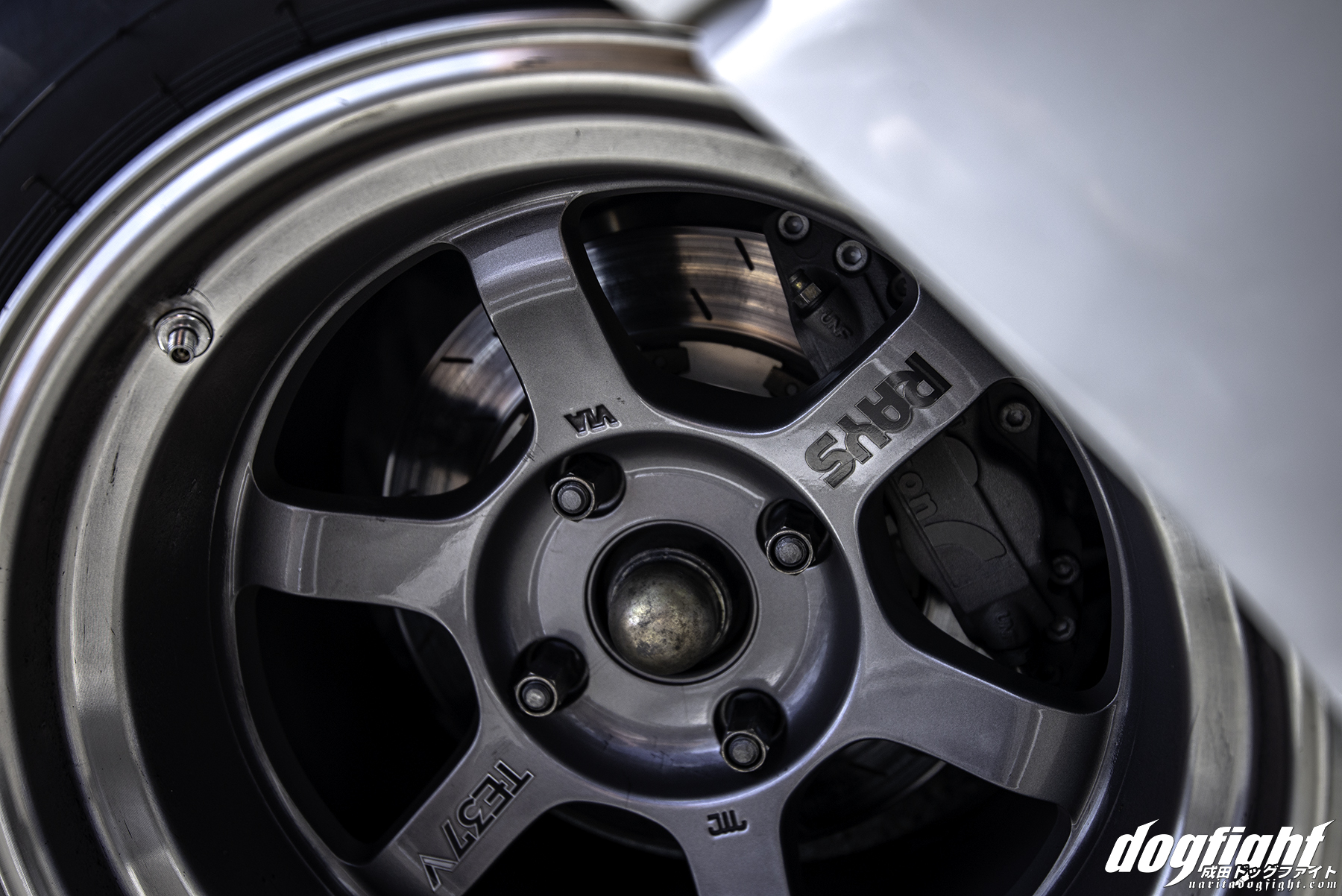 The icon TE37V’s sit at each corner – almost a staple for a car of this variety.  Alcon brake calipers are a bit hidden behind the spokes. 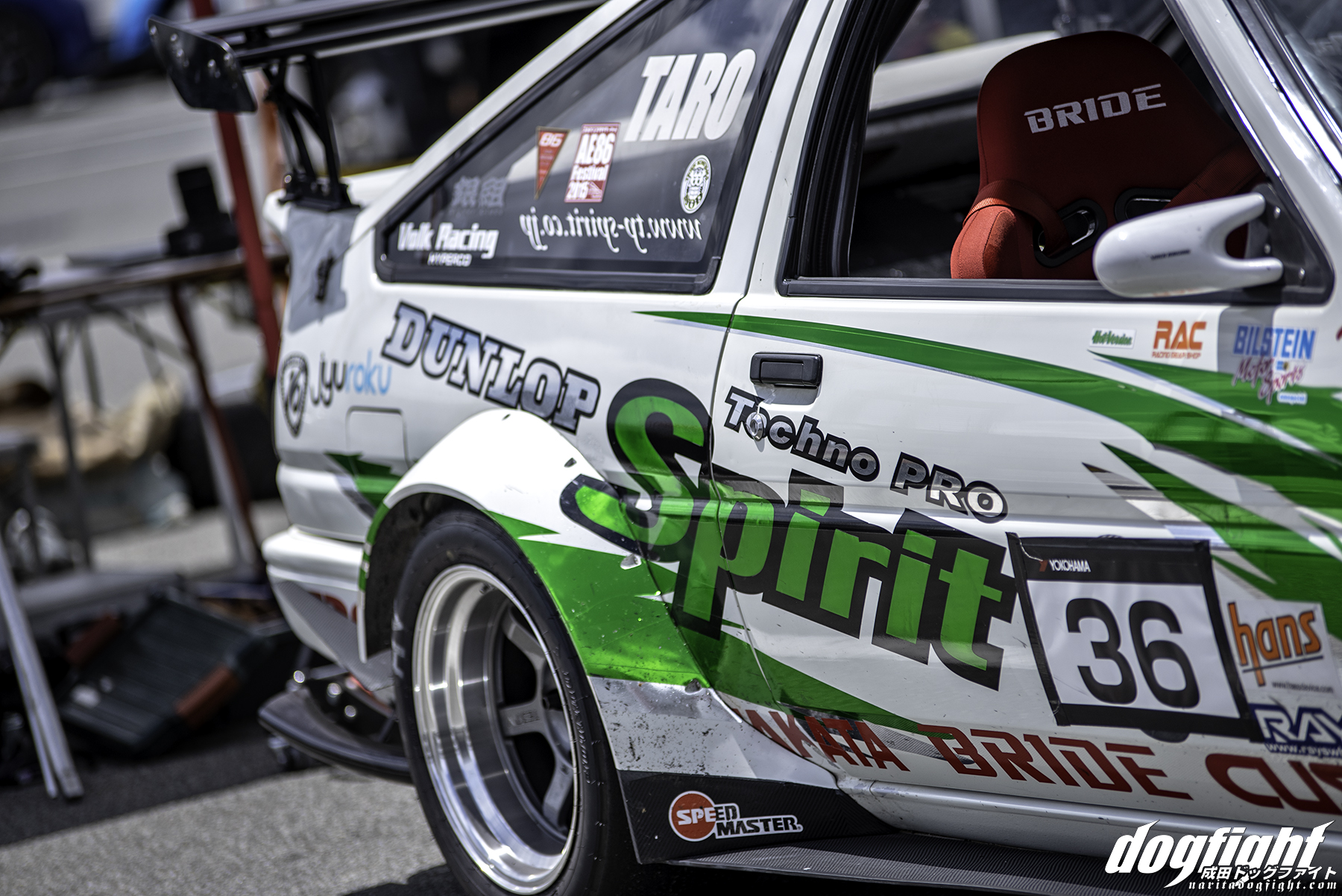 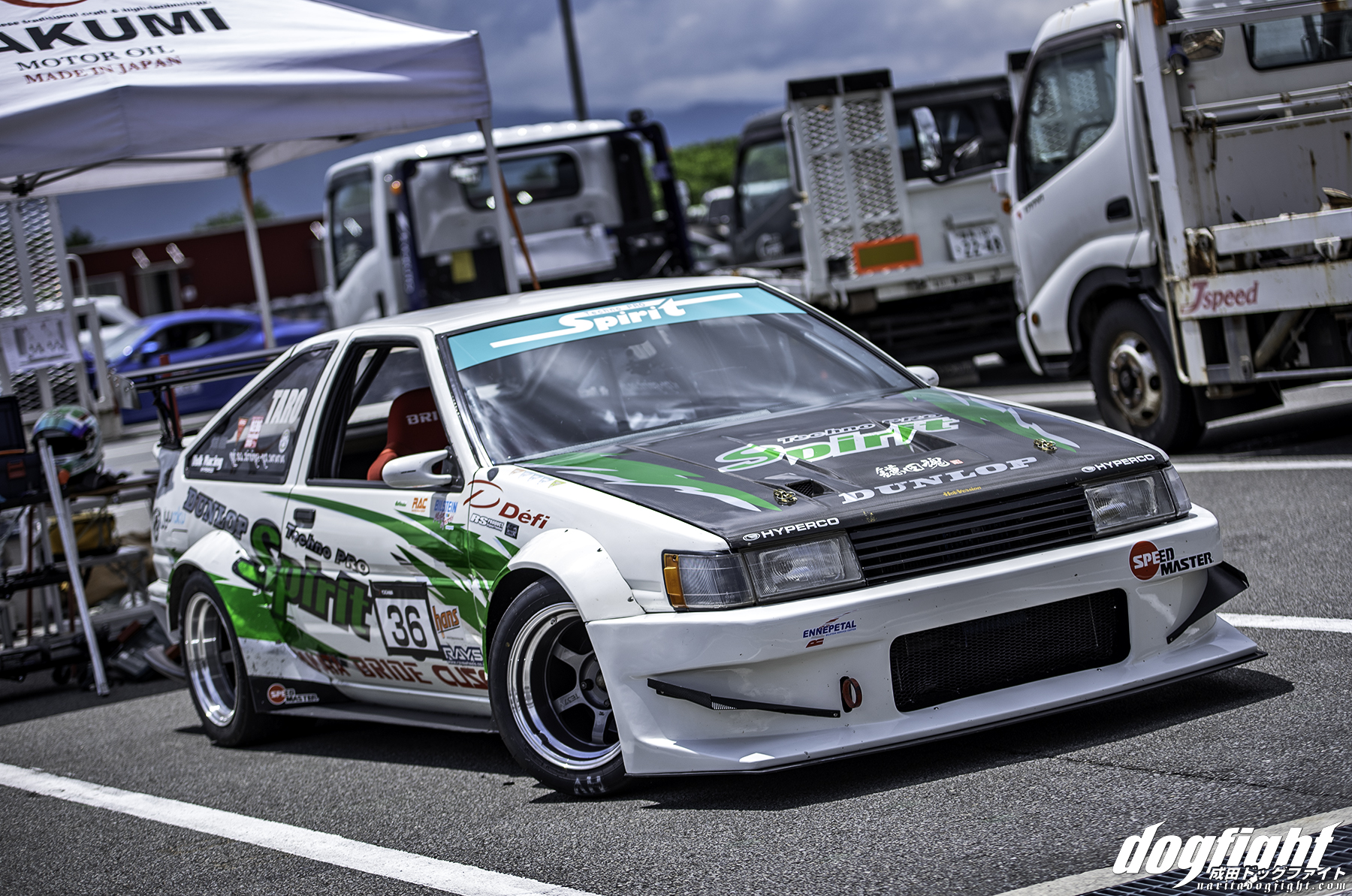 Even the livery of the car has remain relatively unchanged since I last saw it.  A new bumper and canard setup modernizes the car a bit though. 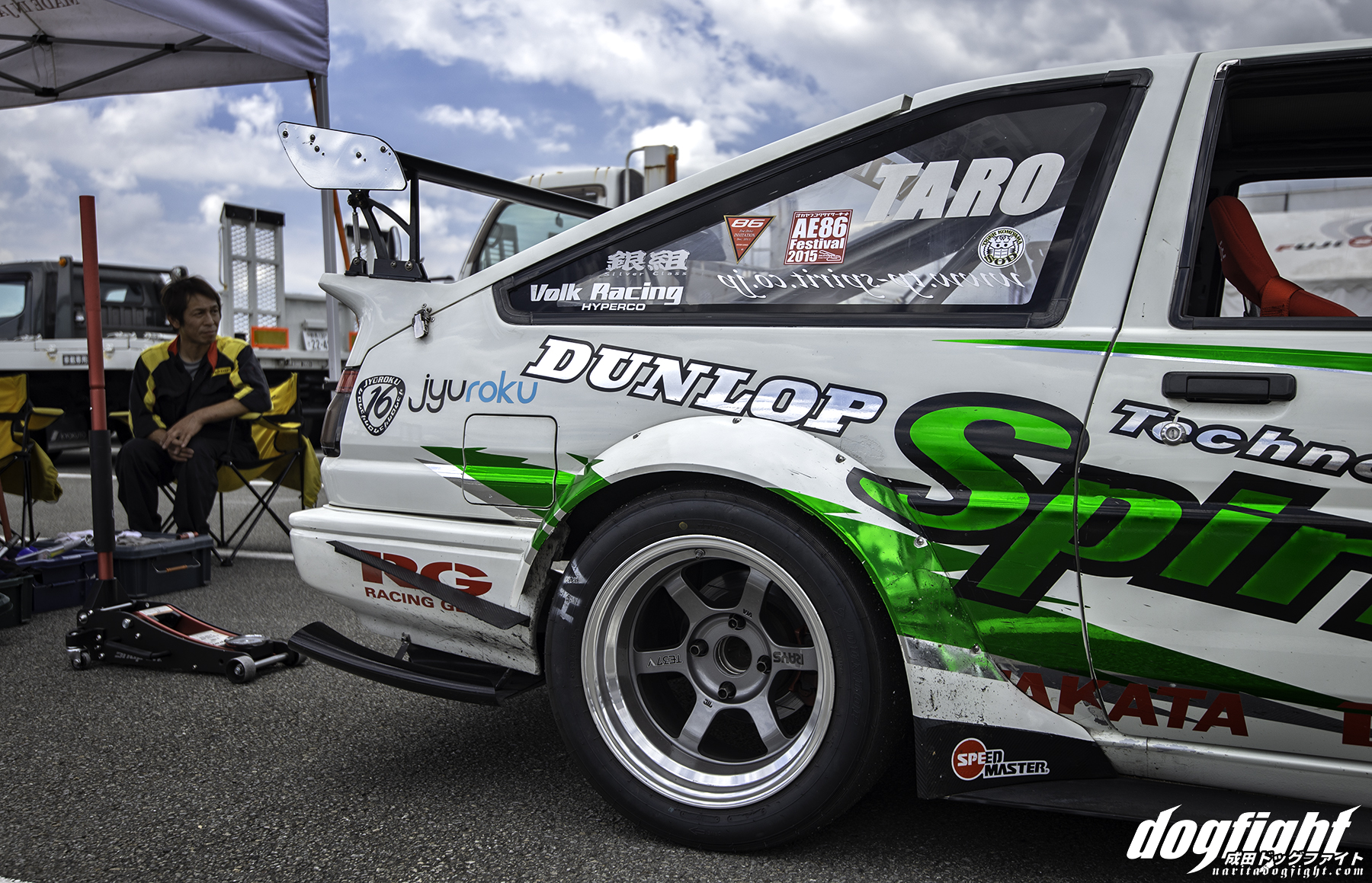 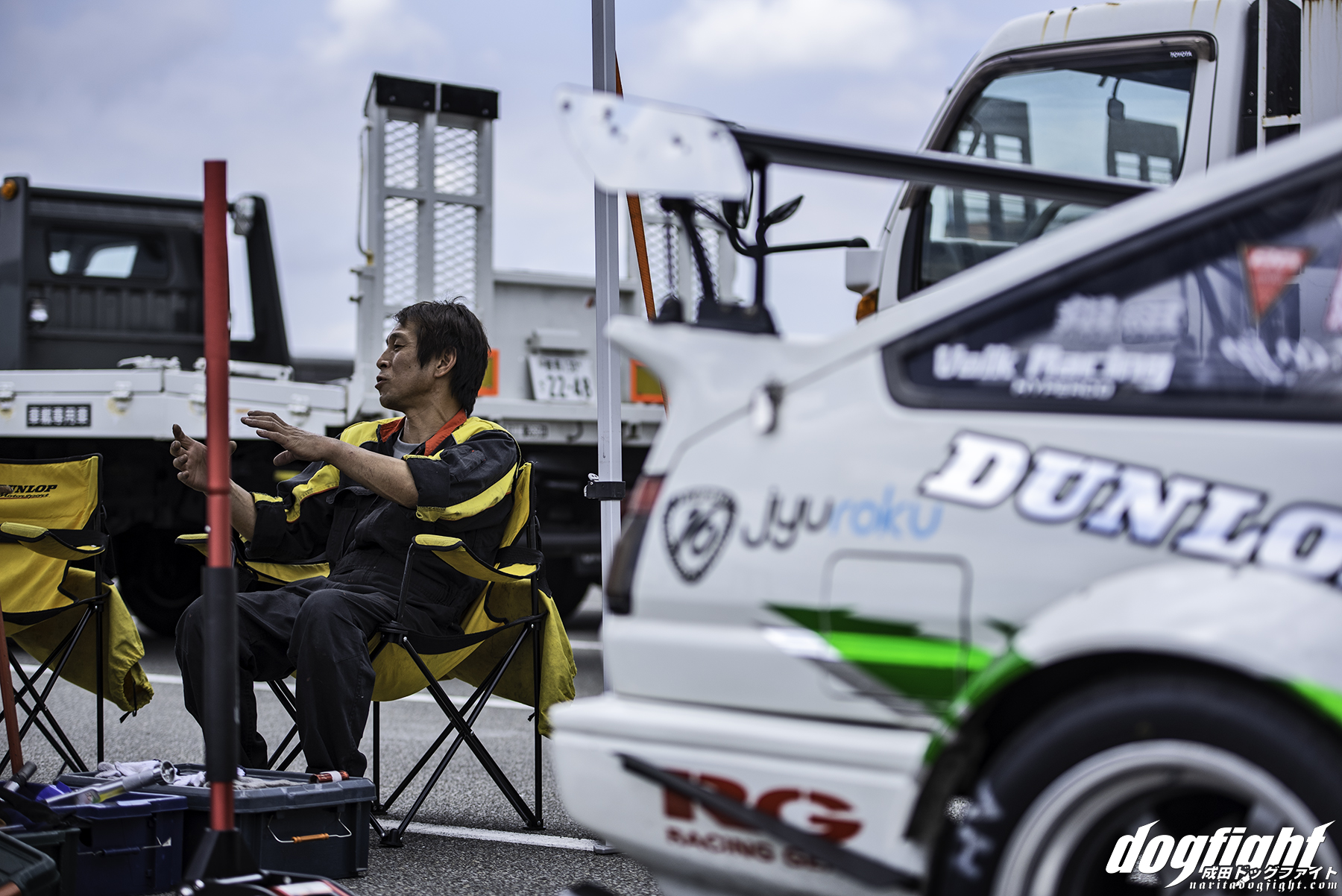 Asano sitting back, shooting the breeze with Kumakura about car stuff. 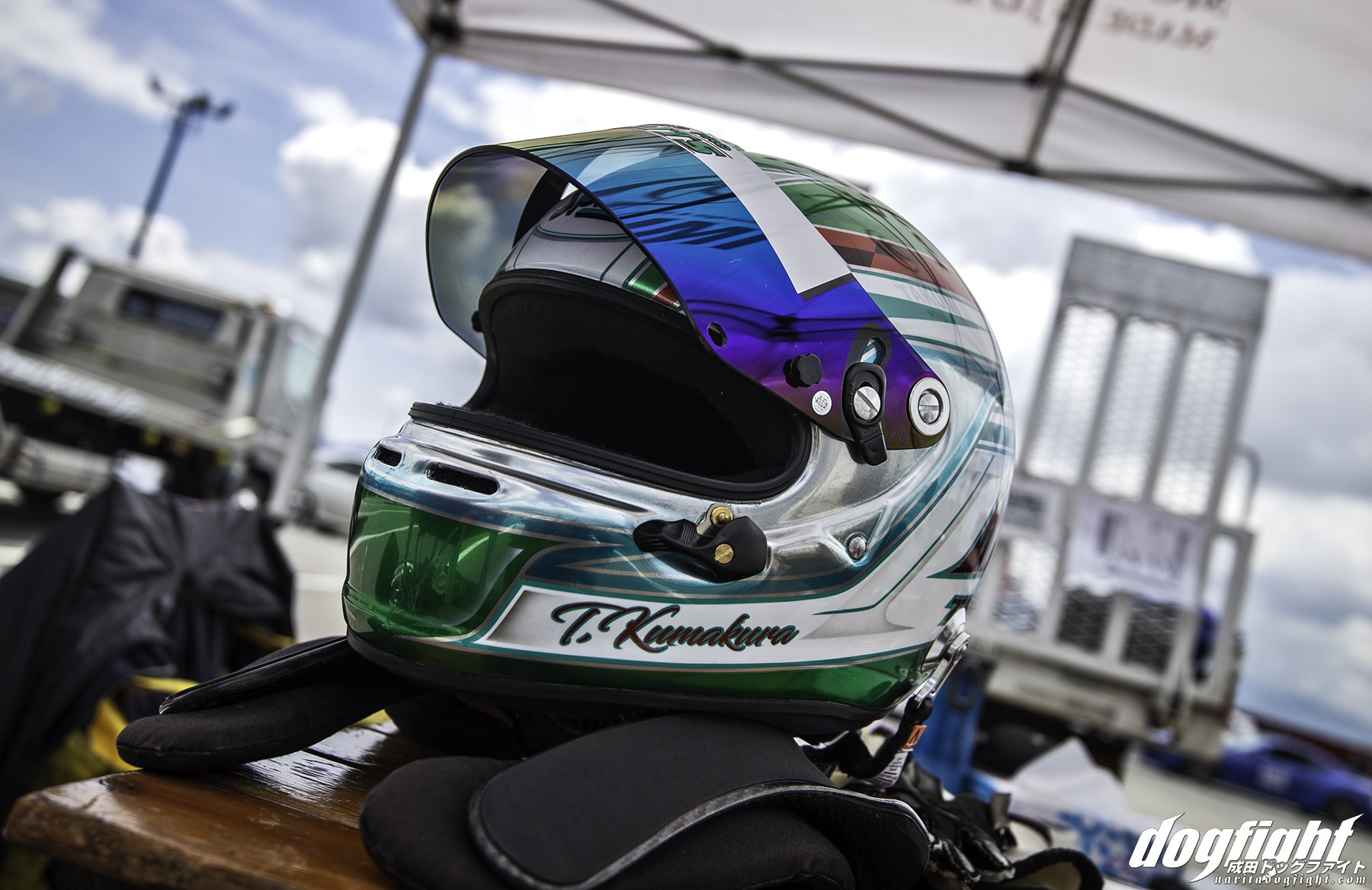 Great livery on the helmet. 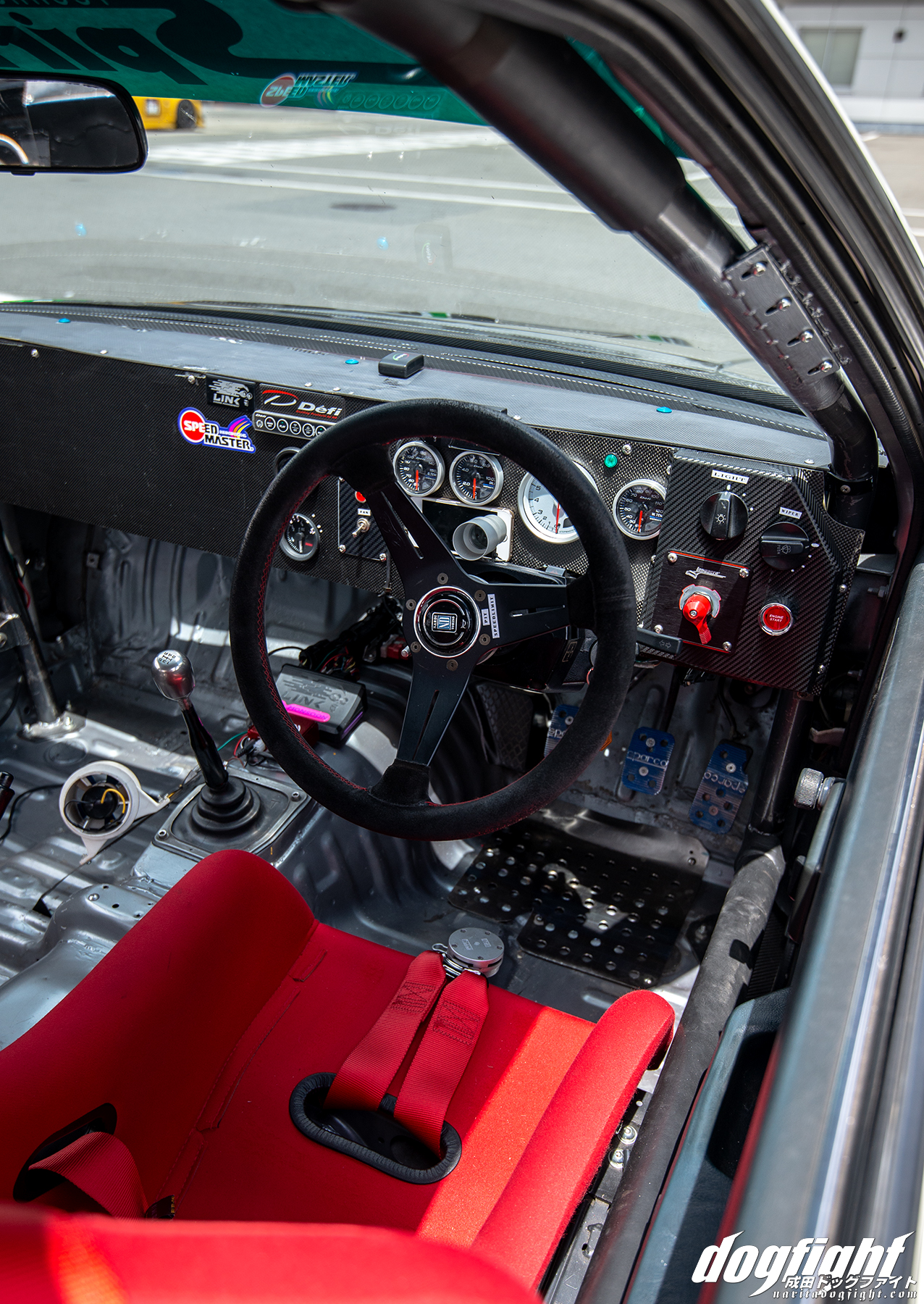 Inside the car is what you’d imagine; not much.  A full carbon dash houses the array of Defi gauges that give the driver all the info they need.  I like that the OE light toggles are repurposed on the new dash.  A Bride seat and Nardi wheel wrap up the rest of the important stuff. 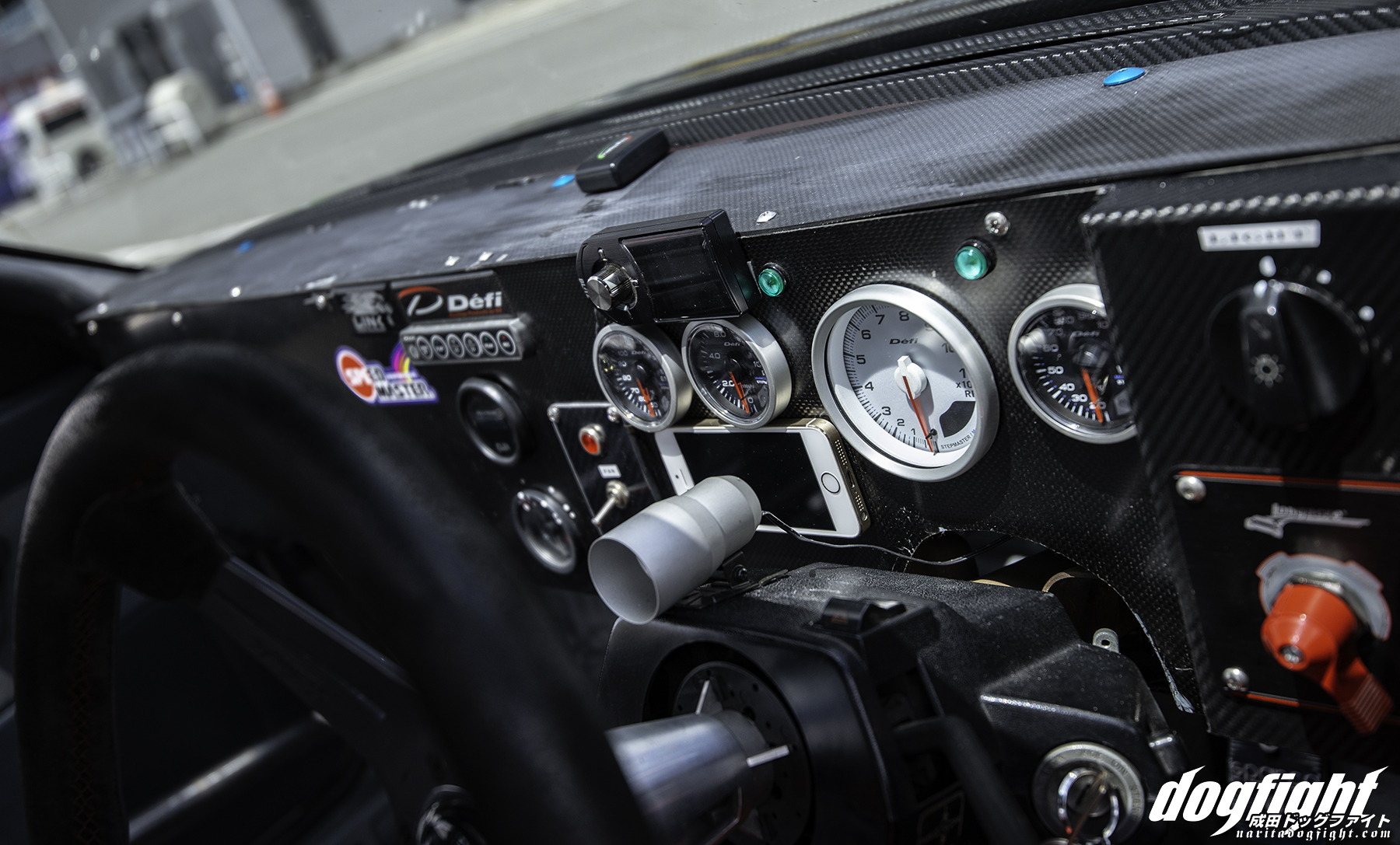 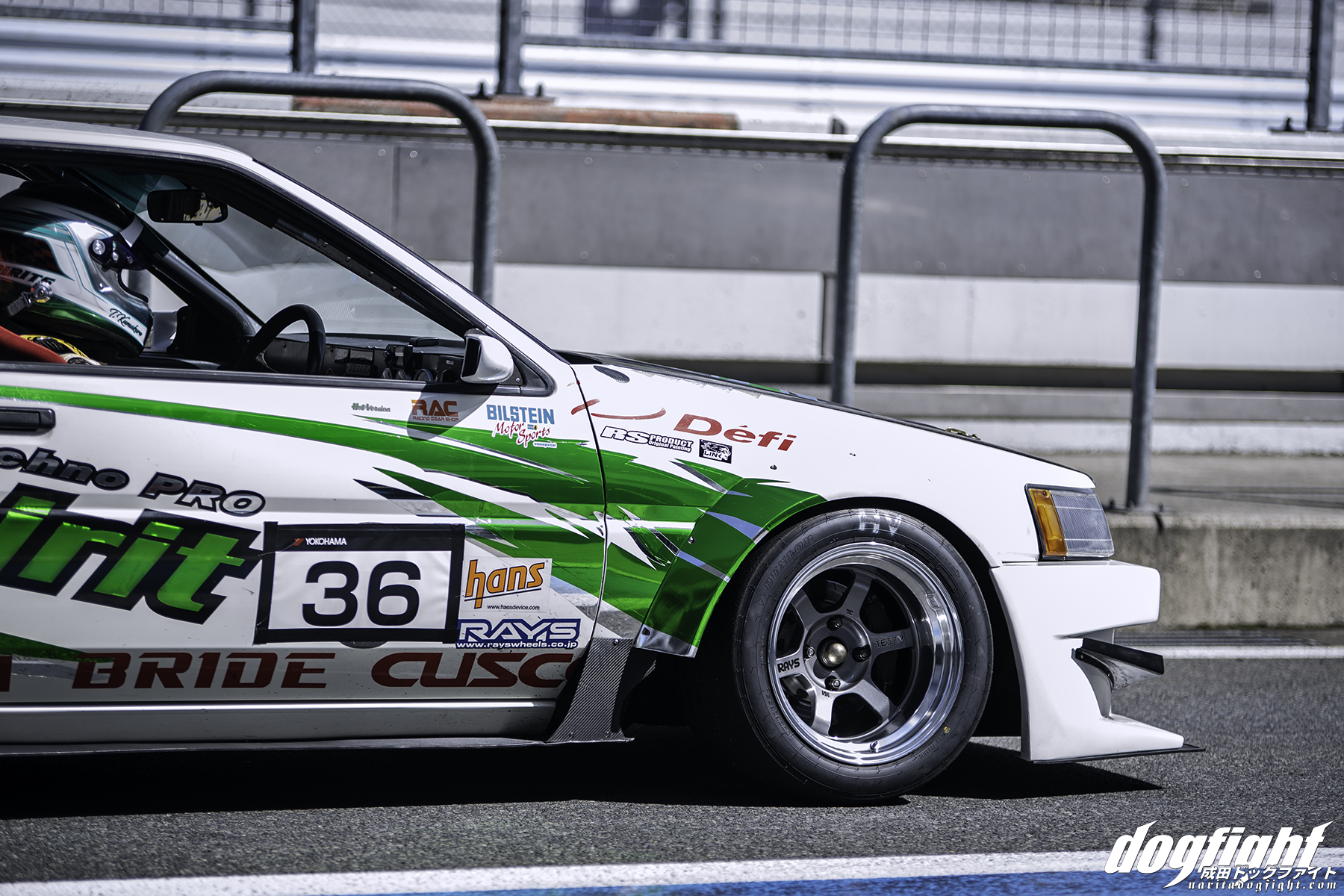 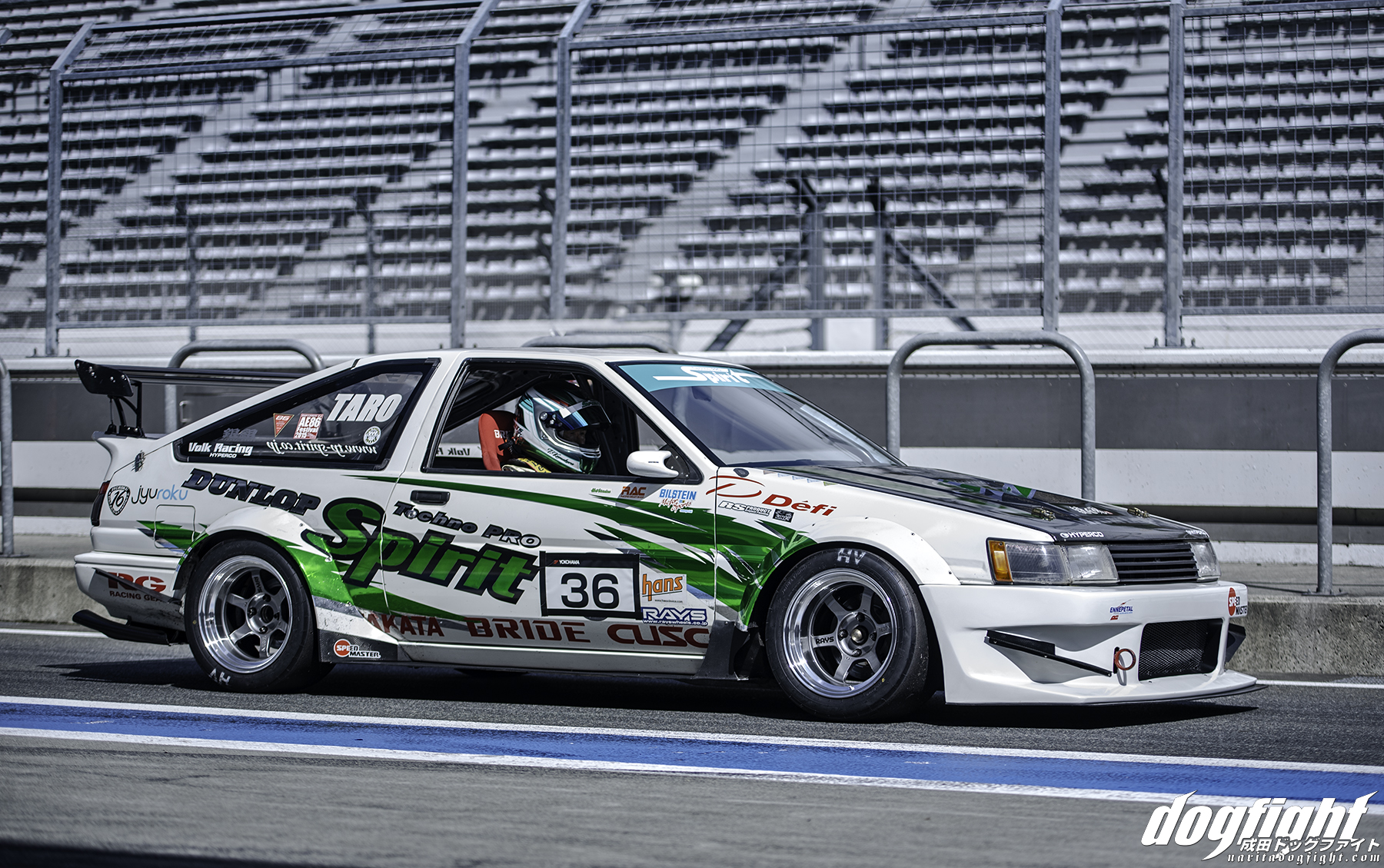 In staging for the afternoon session… 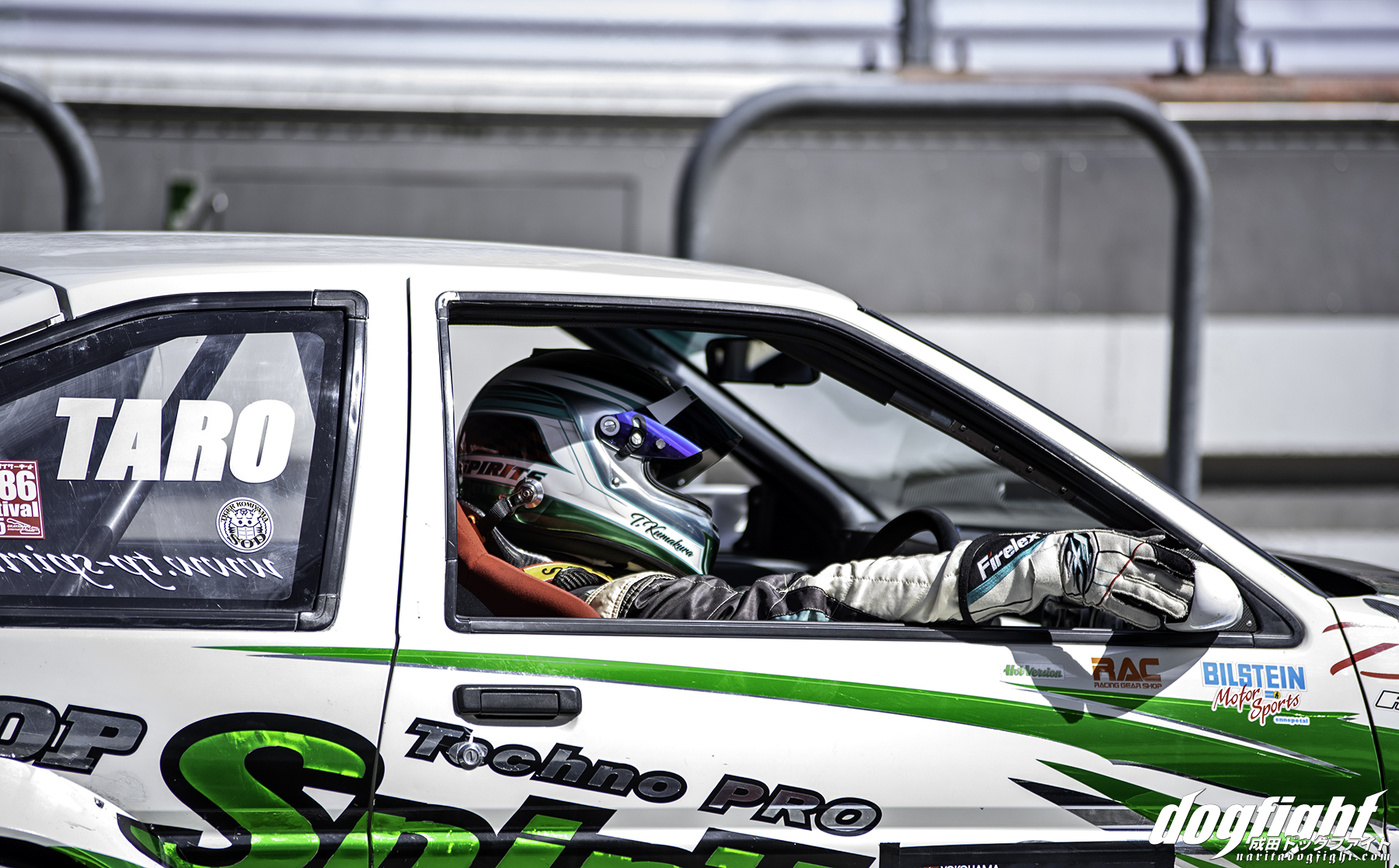 …looking as relaxed as ever.  I guess if there is no pressure to set a fast lap, or overtake your opponents, you have a chance to relax and just enjoy the drive.  I think that is preceisley what Kumakura was doing this weekend.

Check out a video from Yokohama Australia of the car in action around TC2000: