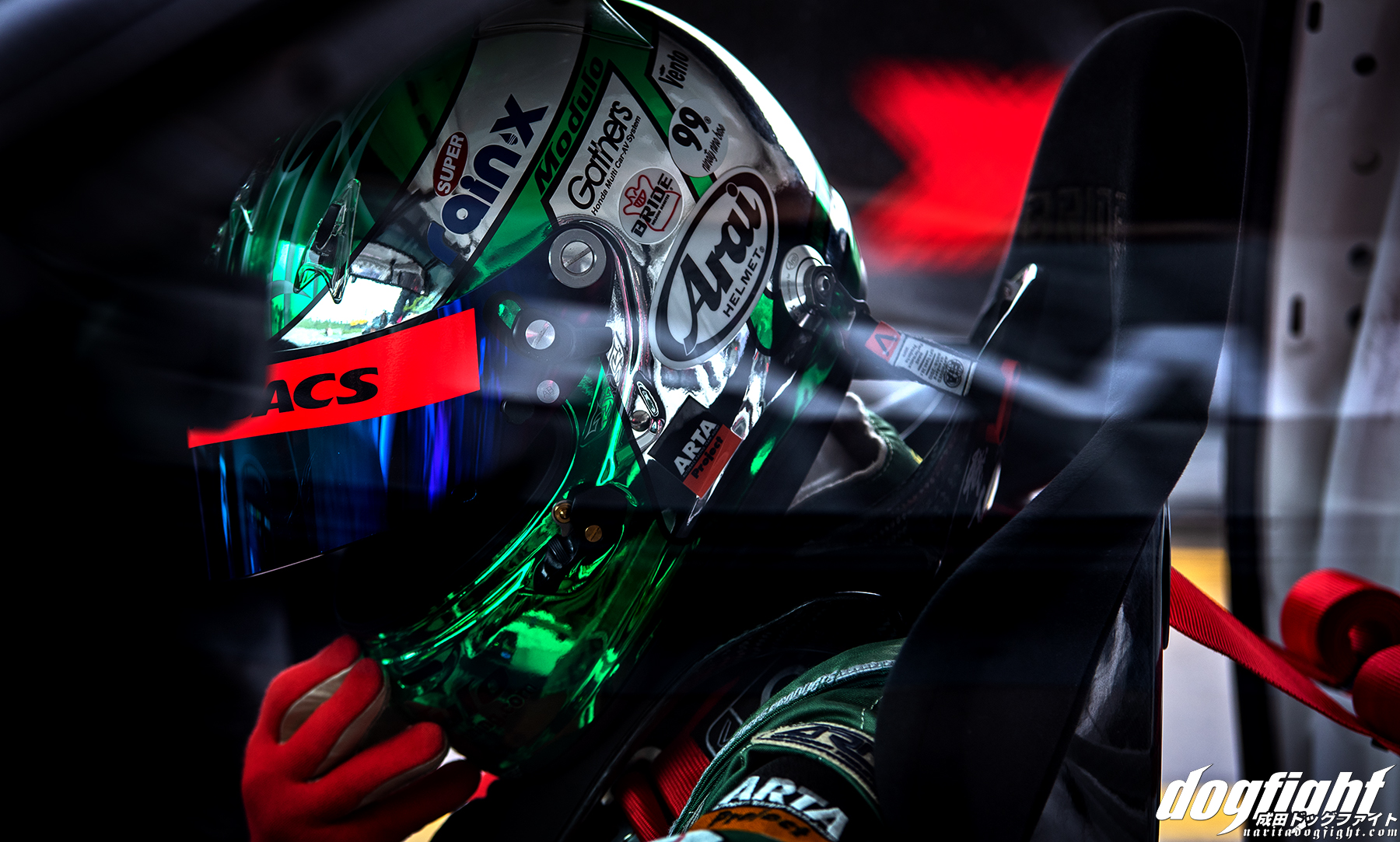 One of the more anticipated cars of this year’s WTAC among fans and builders alike, had to be Beau Yates’ revamped AE86.  With Mark Bissett leading the team, the car was built at Hypertune in Sydney, and has been entirely stripped of it’s former drift specification and rebuilt as a time attack car fit for a king; and by king, I mean none other than Keiichi Tsuchiya.  Keiichi was slated to drive the car in Open Class this year at Sydney Motorsports Park.

If you recall, when this car campaigned in Drift Australia, it was already built to a very high standard.  In order to give Tsuchiya a car that they know would bring pride to both Australia and Japan, many parts that were replaced had to be custom made from all over the world, or CNC’d in Hypertune’s local facility.  Of course, Beau himself had a very personal stake in the project:

“As I had no intention of ever drifting this car in competition again, the option to turn it into a way-cool track car was always in the back of my mind.  When the guys spoke to me about Keiichi returning in 2018 and needing a car to compete in, well I guess it really got me thinking, and really, it just snowballed! If we were going to do it then it had to be done properly as I can’t have him in a second rate car. He has had a long association with Toyota, so it all fits really well for my sponsor Toyota Genuine Parts and the guys at Hypertune have been amazing as usual…” (WTAC)

The final product was one that Tsuchiya was able to snag a fast lap of 1’35.7  in, and had spoke very highly of the car after his first drive.  They had estimated the car good for mid-30’s, so I guess you could say they met their initial goal. 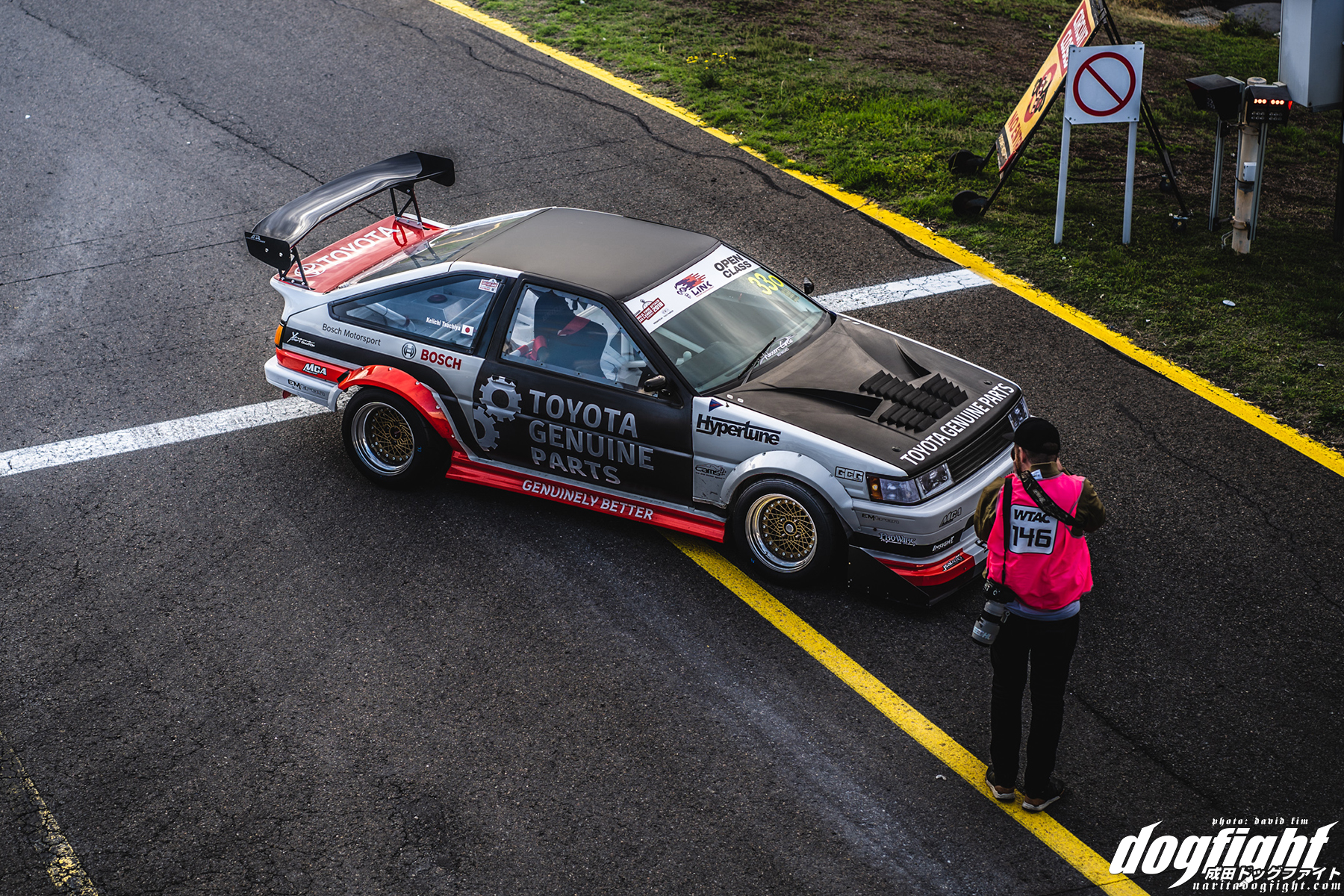 The car retains the classic lines of the car along with the popular Levin front end.  Although in Open Class, the car has the opportunity to be decked out in much more aerodynamic assistance than it has, the team at Hypertune was careful not to stray too far from the car that Tsuchiya loves so much.  A custom front splitter and end plate combination, along with the GT Wing on the hatch make up the bulk of the additional aerodynamics. 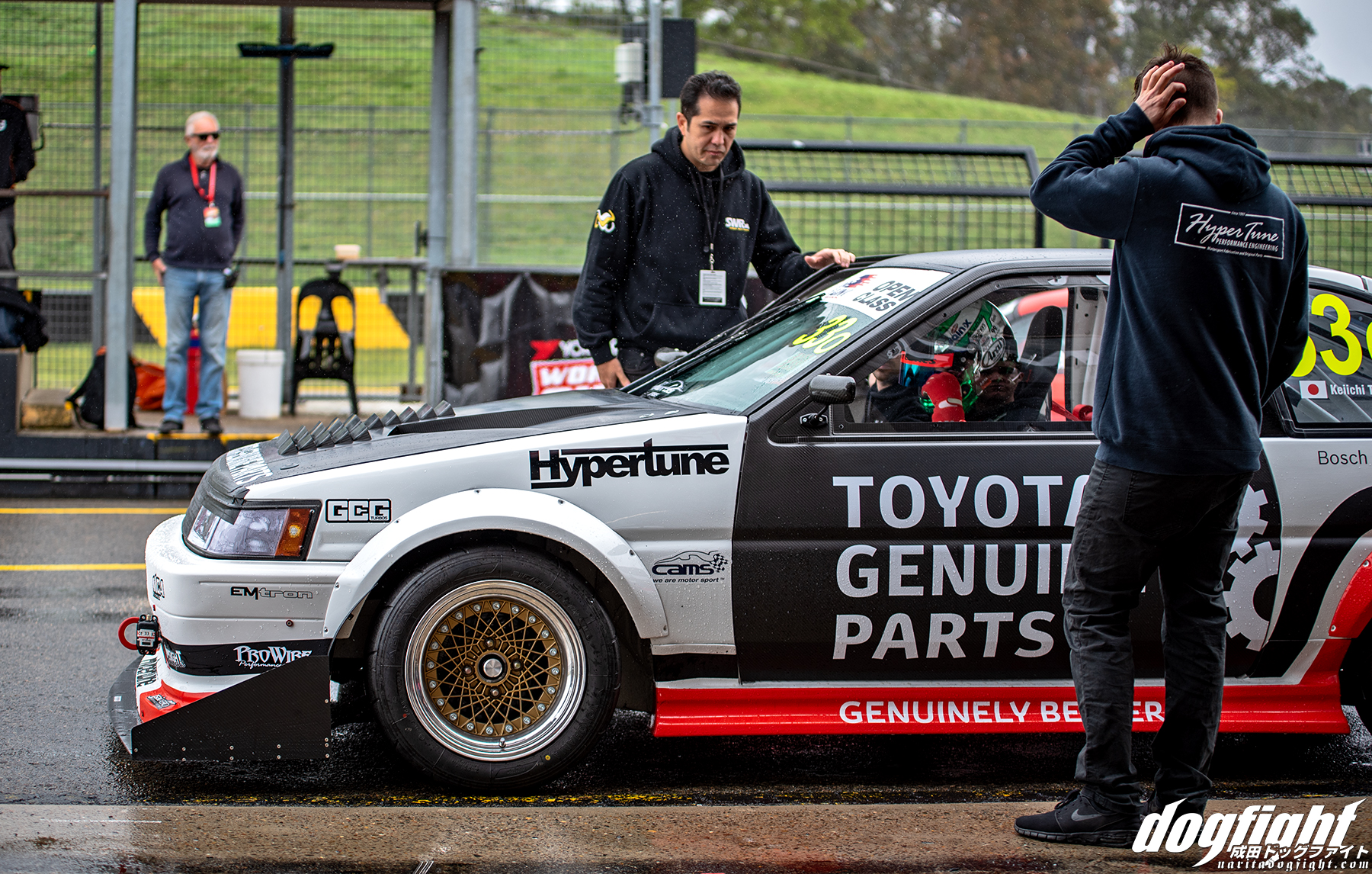 Heading out in Thursday’s practice, the track was very damp.  Having rained all night and through the morning the skies provided no break for the drivers leading up to the event. 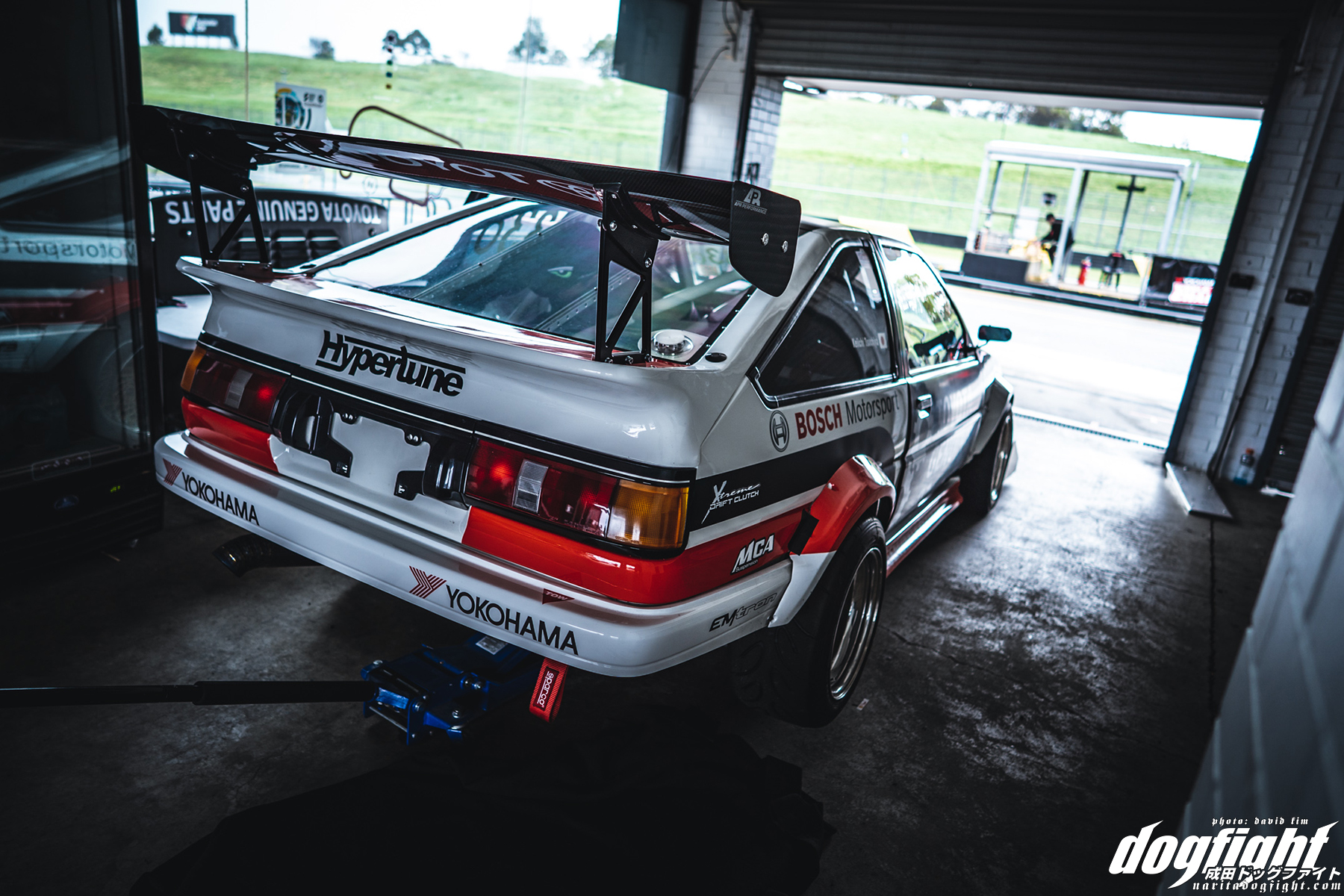 People were in and out of the pit all day on Friday and Saturday; so much so that it was difficult to get a clean shot.  On Thursday we were able to get a few close up photos of the car, as it was relatively lonesome without the HKS TRB-03 as it’s neighbor yet. 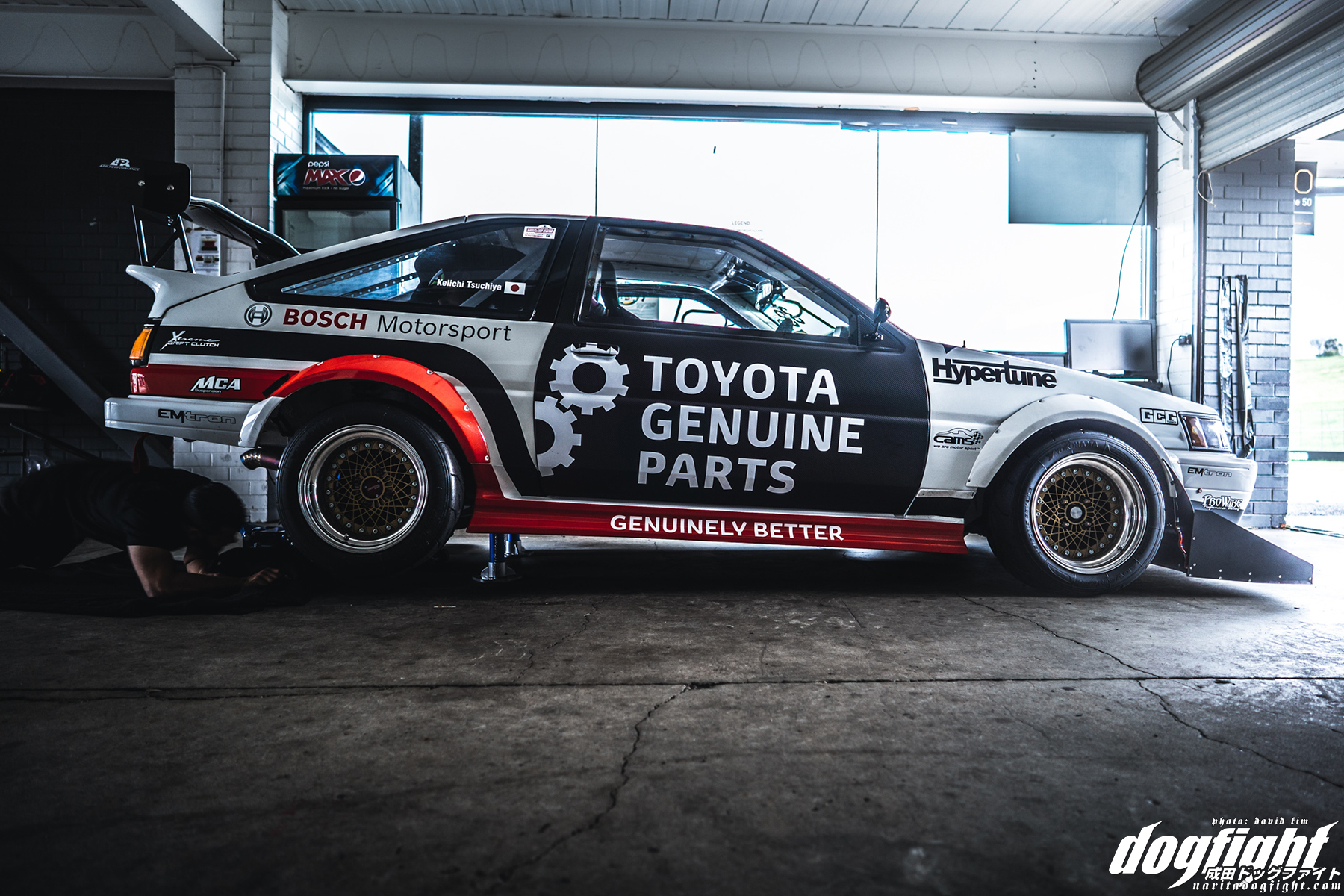 The car ran almost flawlessly all day, with the exception of an injector plug popping off intermittently during practice.  For a car that was rebuilt basically from the ground up, to have almost no issues is pretty incredible. 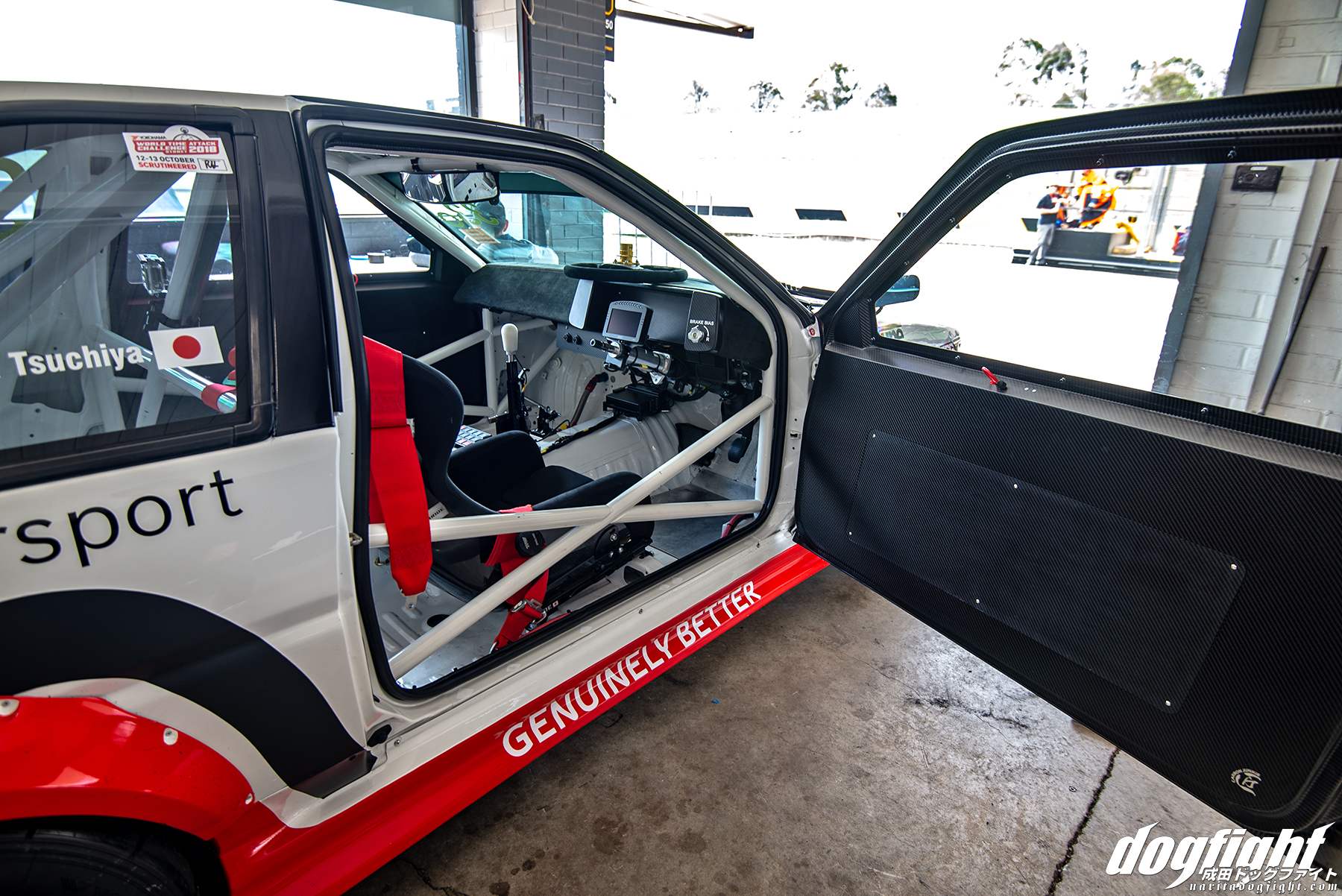 The interior of this car is clean enough for any enthusiast, driver or car builder to get struck with a bout of jealousy.  The layout of the dash, electronics, and brake setup is second to none.  Carbon doors and cards from Work Shop Takumi (aka Carbon Junkie) not only round out the cleanliness of the interior, but work to bring the cars weight down.  Takumi was also enlisted to provide his iconic 86 hood. 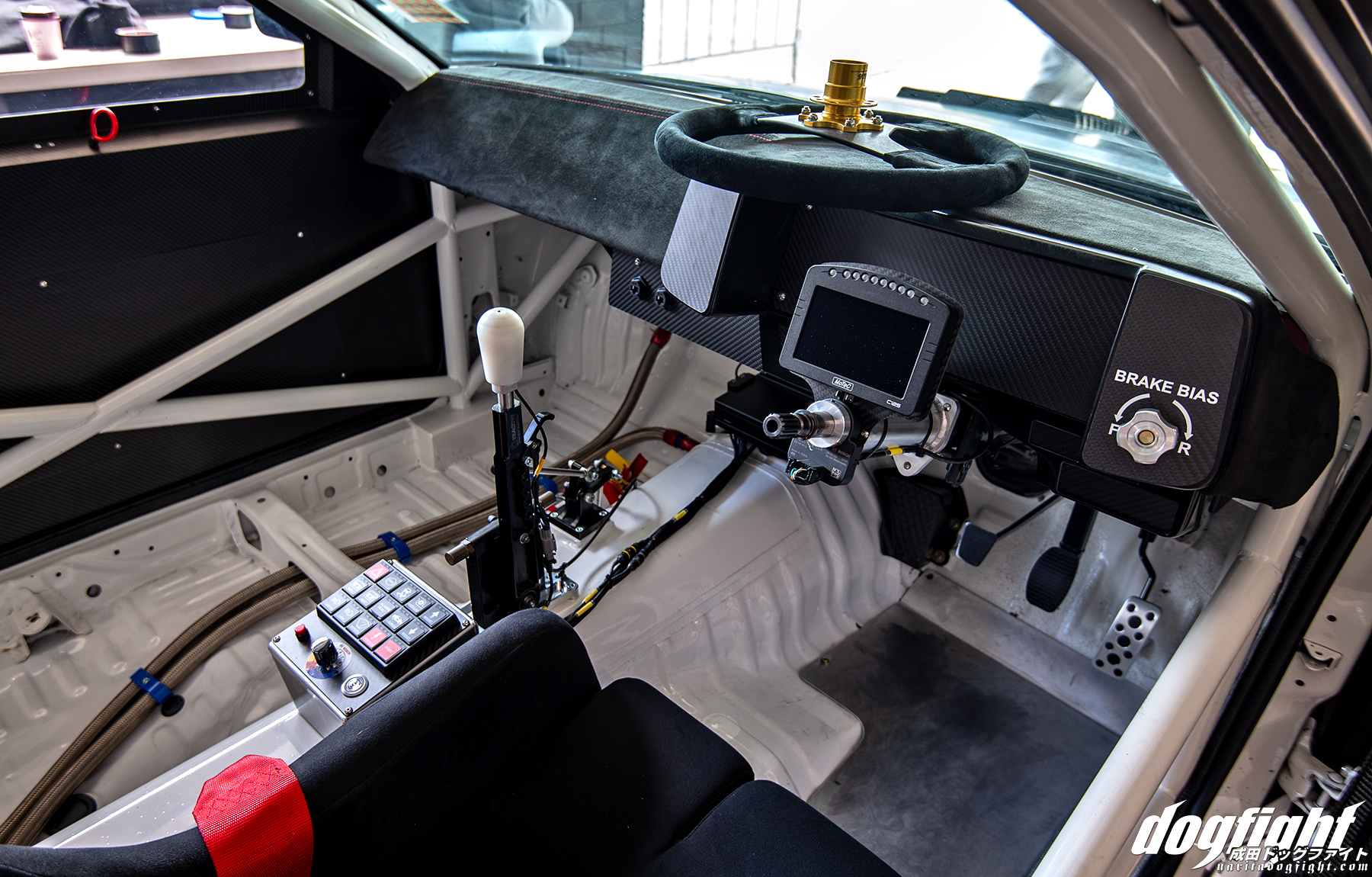 The car is equipped with Bosch’s Motorsport ABS system, something that I think we’ll be seeing more of in time attack across the globe.  You can read about it here. 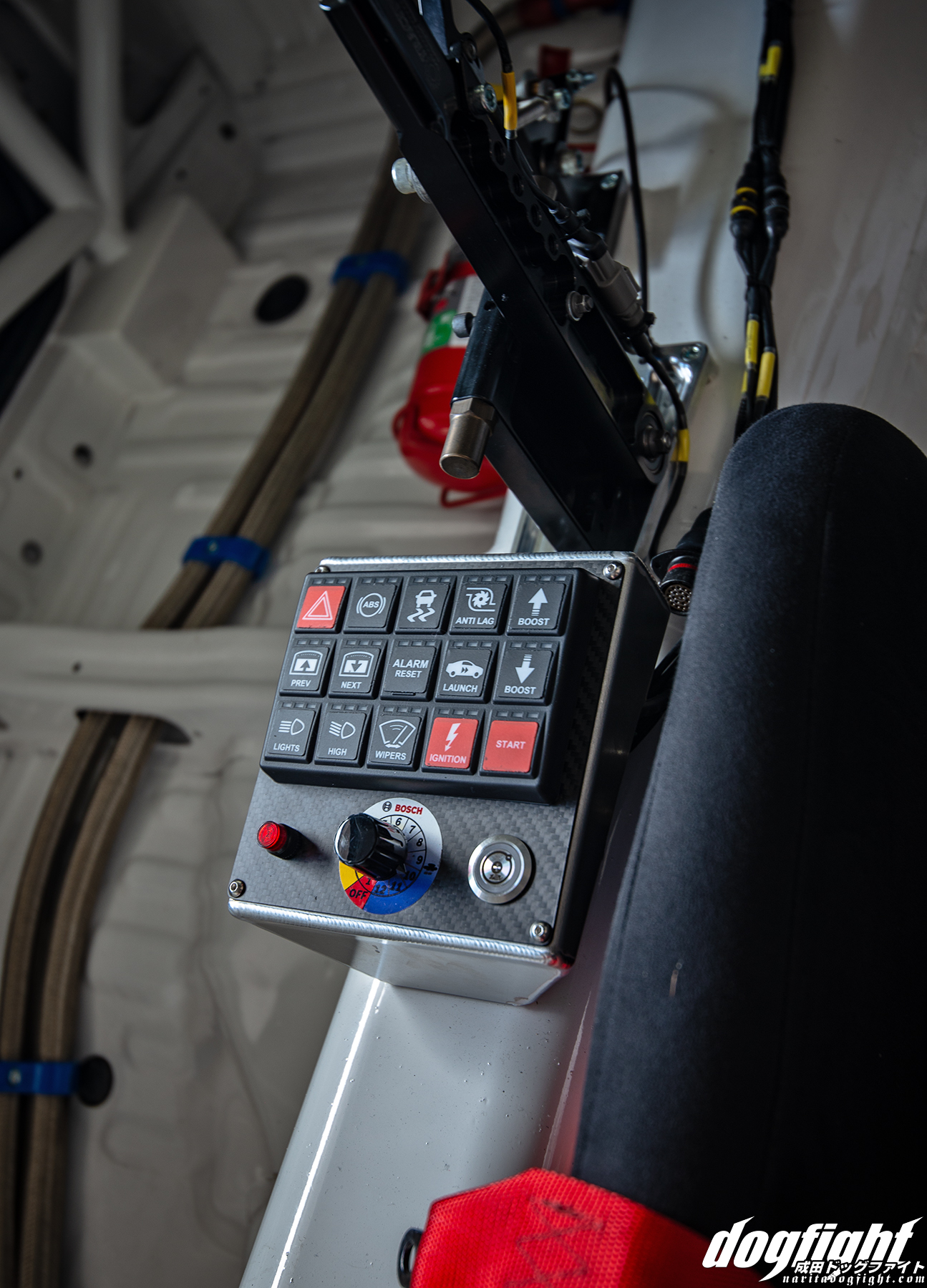 They’ve integrated the ABS level selector into the control panel that is all tied into the new Emtron KV8 ECU. 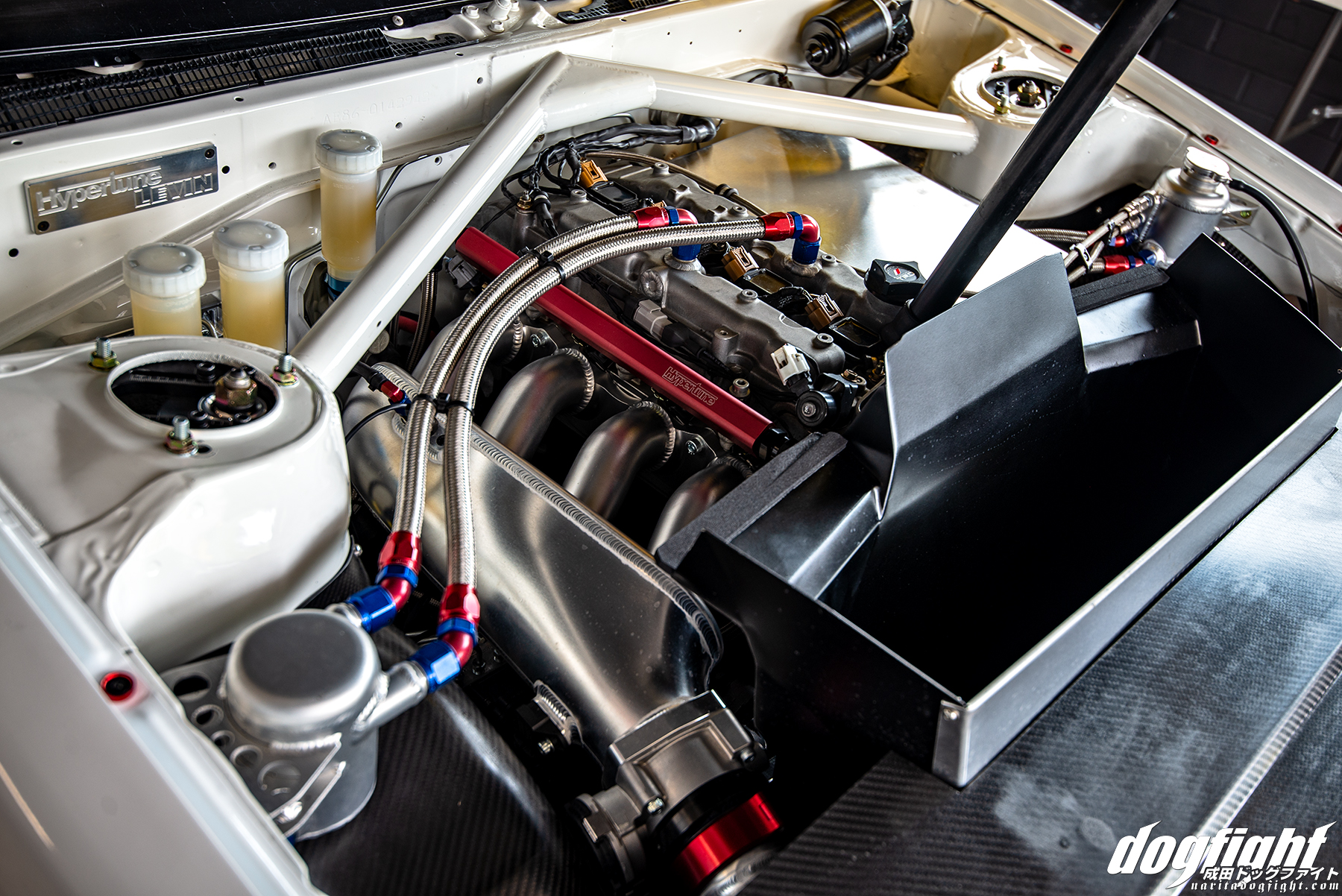 A spotless motor install included the removal of the old H-pattern transmission, and put in it’s place is a sequential Sadve 6-speed unit.

The old coilovers were tossed in favor of a brand new set of MCA Gold units specially valved and setup for the AE86 weight.  An entirely new equal length 4-link rear end fabricated with an adjustable watts linkage for adjustable roll centre and a custom differential manufactured by Race Products in Queensland. 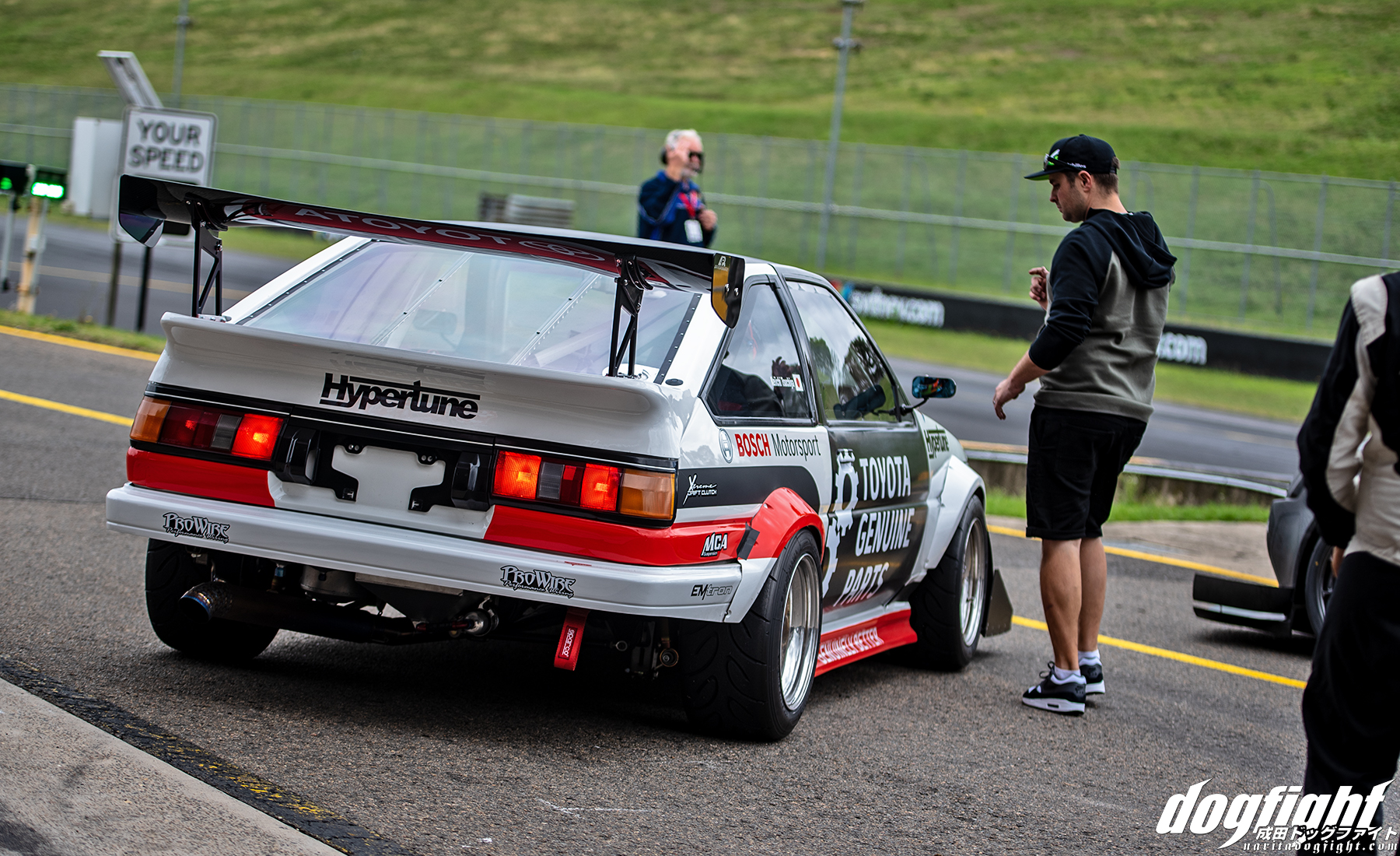 Despite having a good base to start from, it really was like a brand new build. 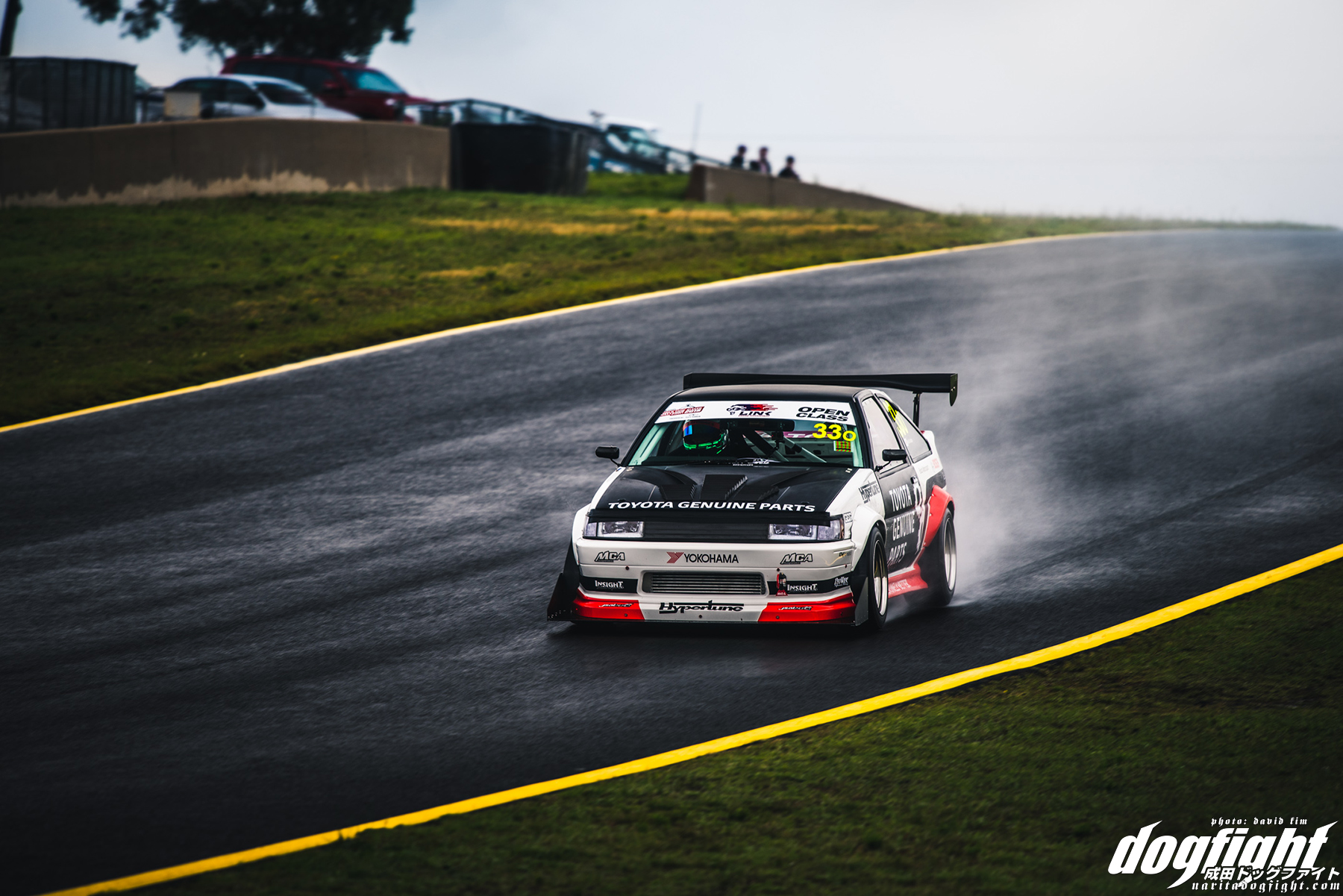 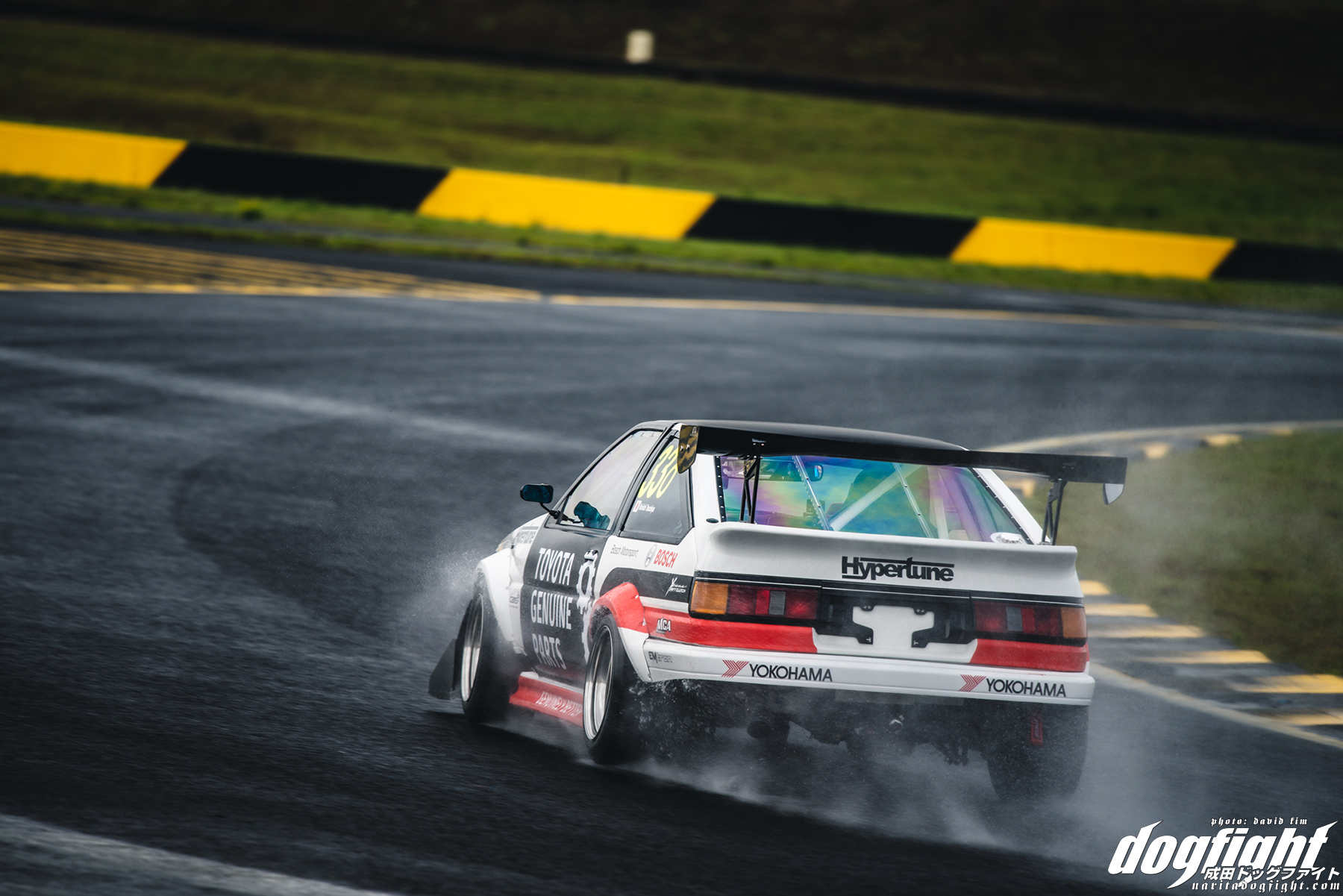 …kicking up a trail of water behind the rear end. 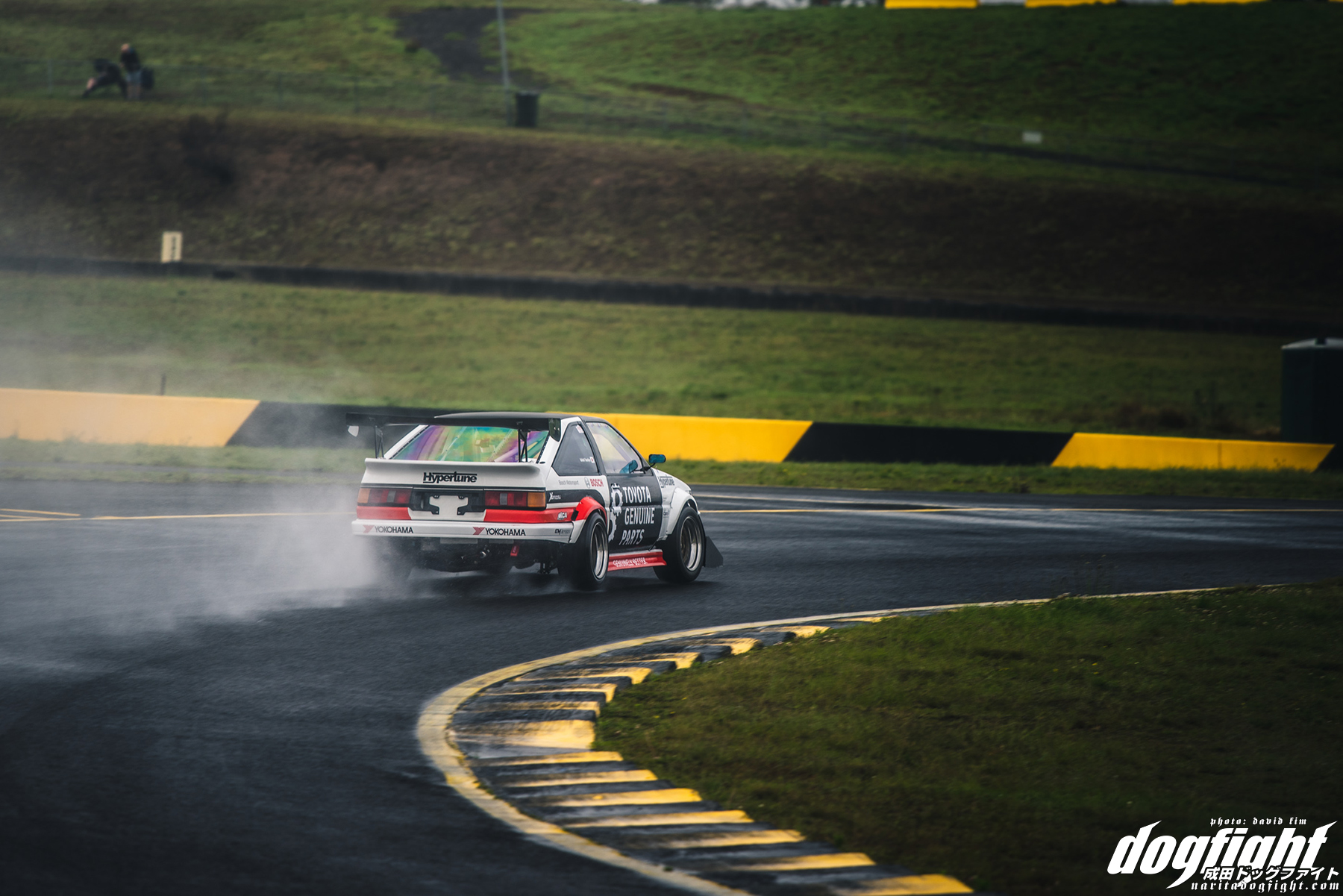 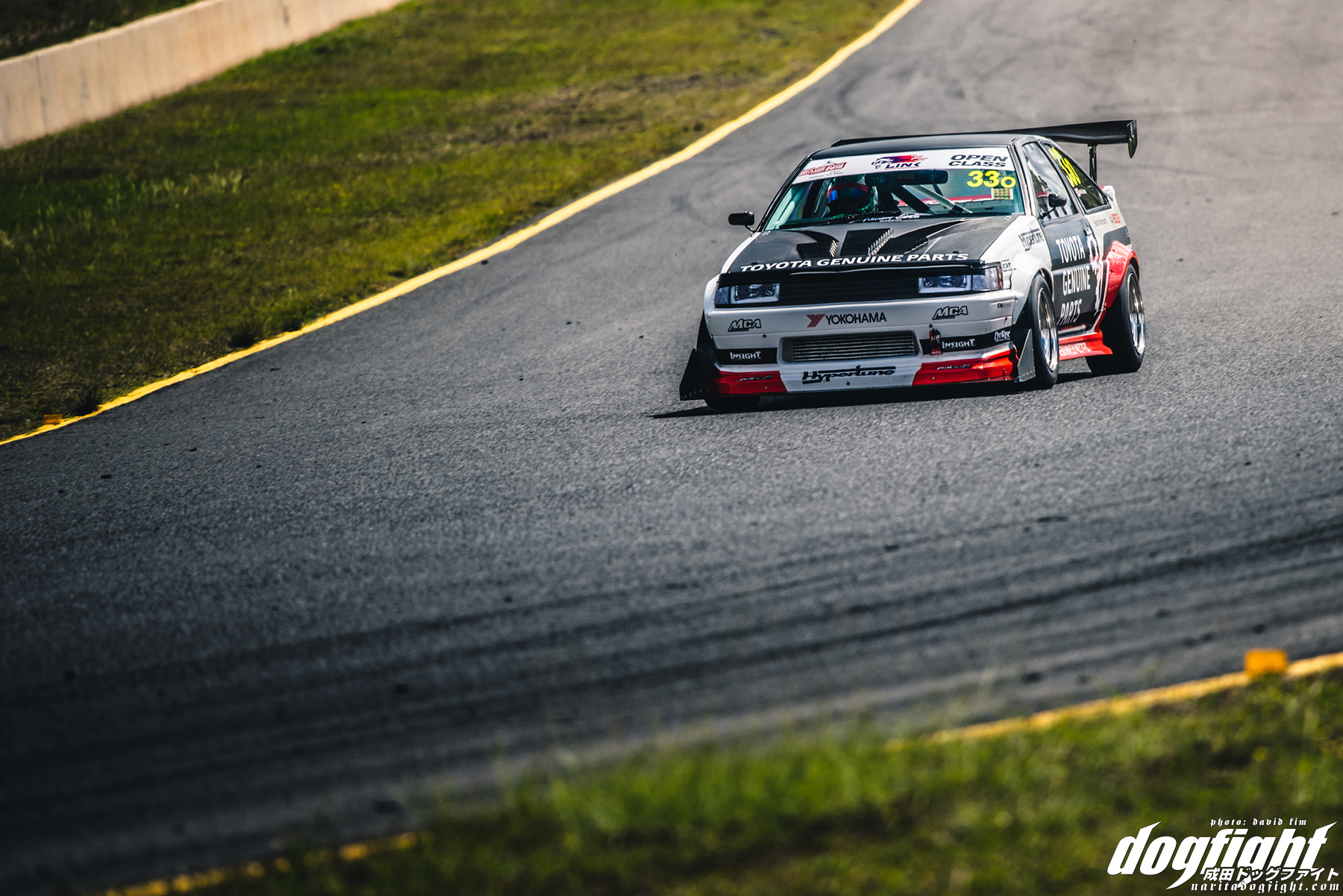 As the track experienced fleeting moments of dryness though, the car really came alive as it was finally able to be pushed to its limit.  It was great to see the man himself truly enjoying himself on circuit, in a car that is in no doubt worthy of his drive.  Enjoy the gallery below. 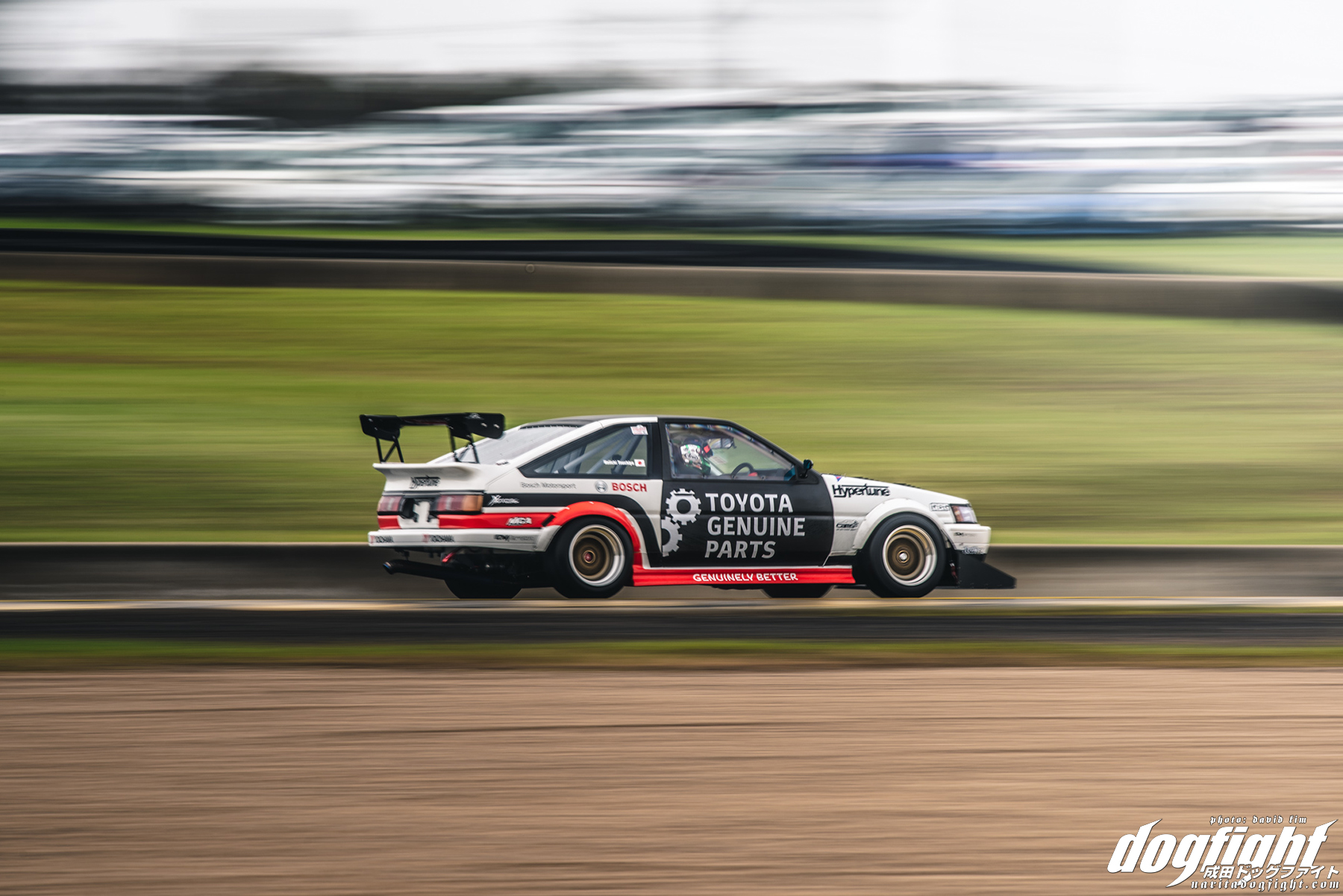 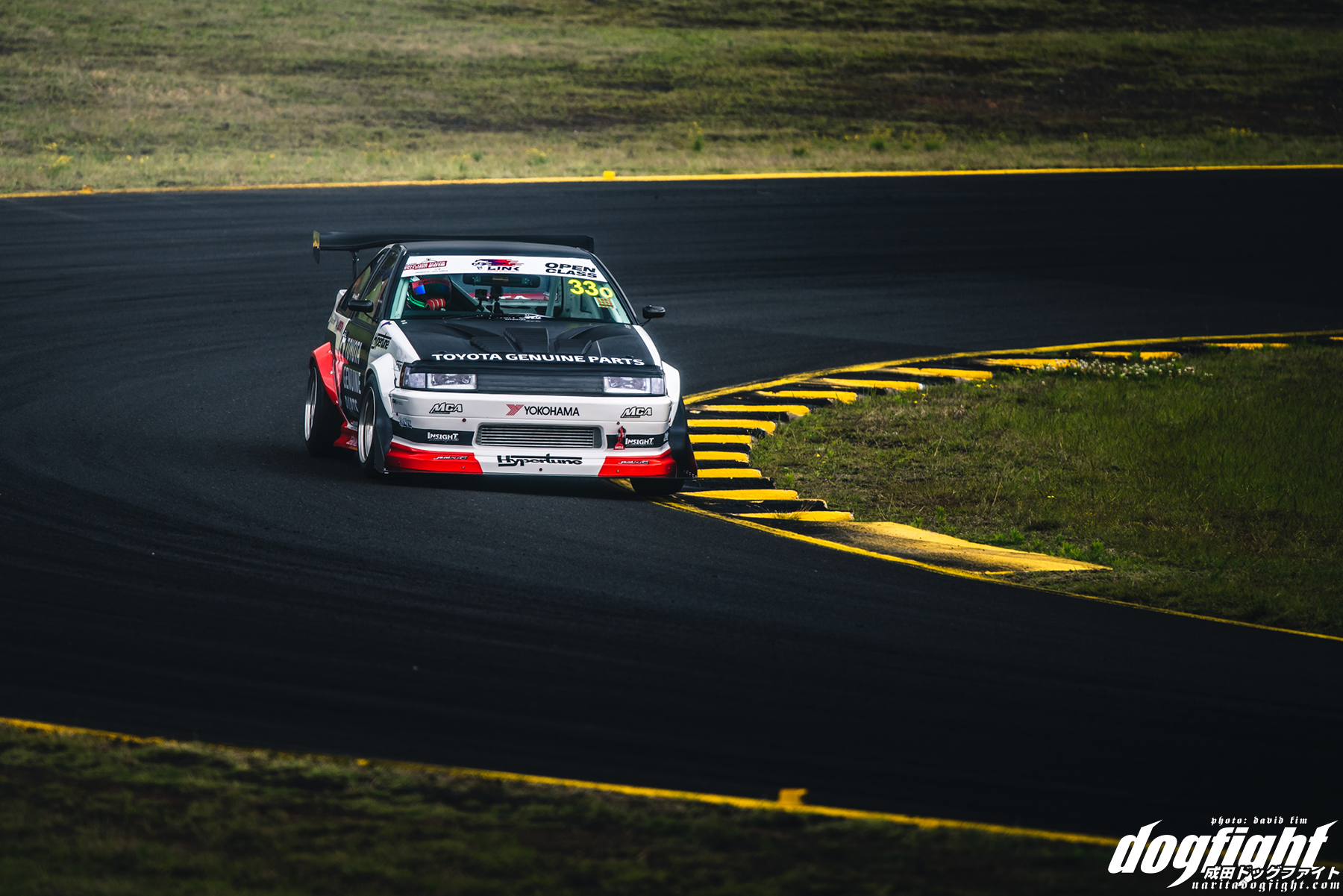 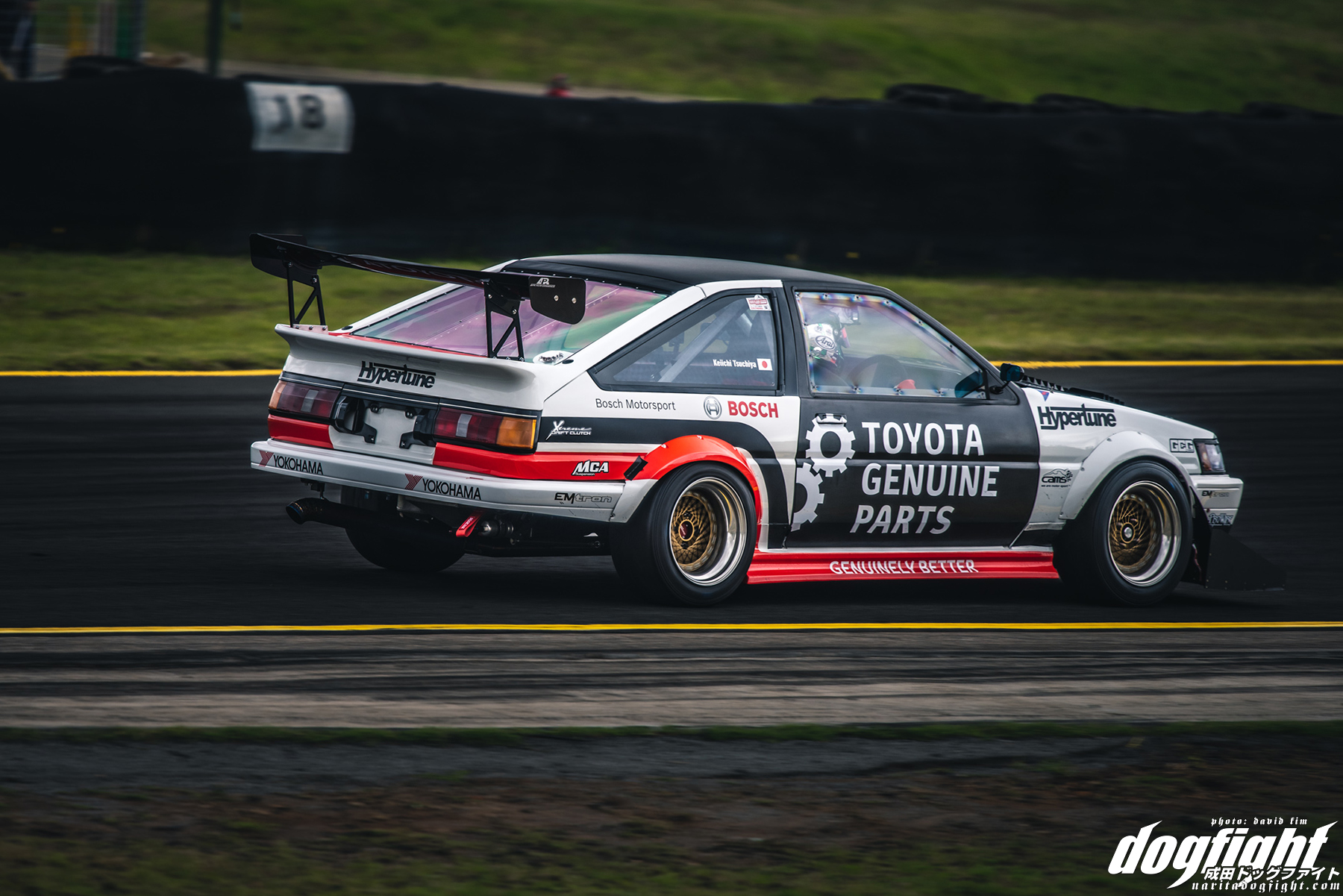 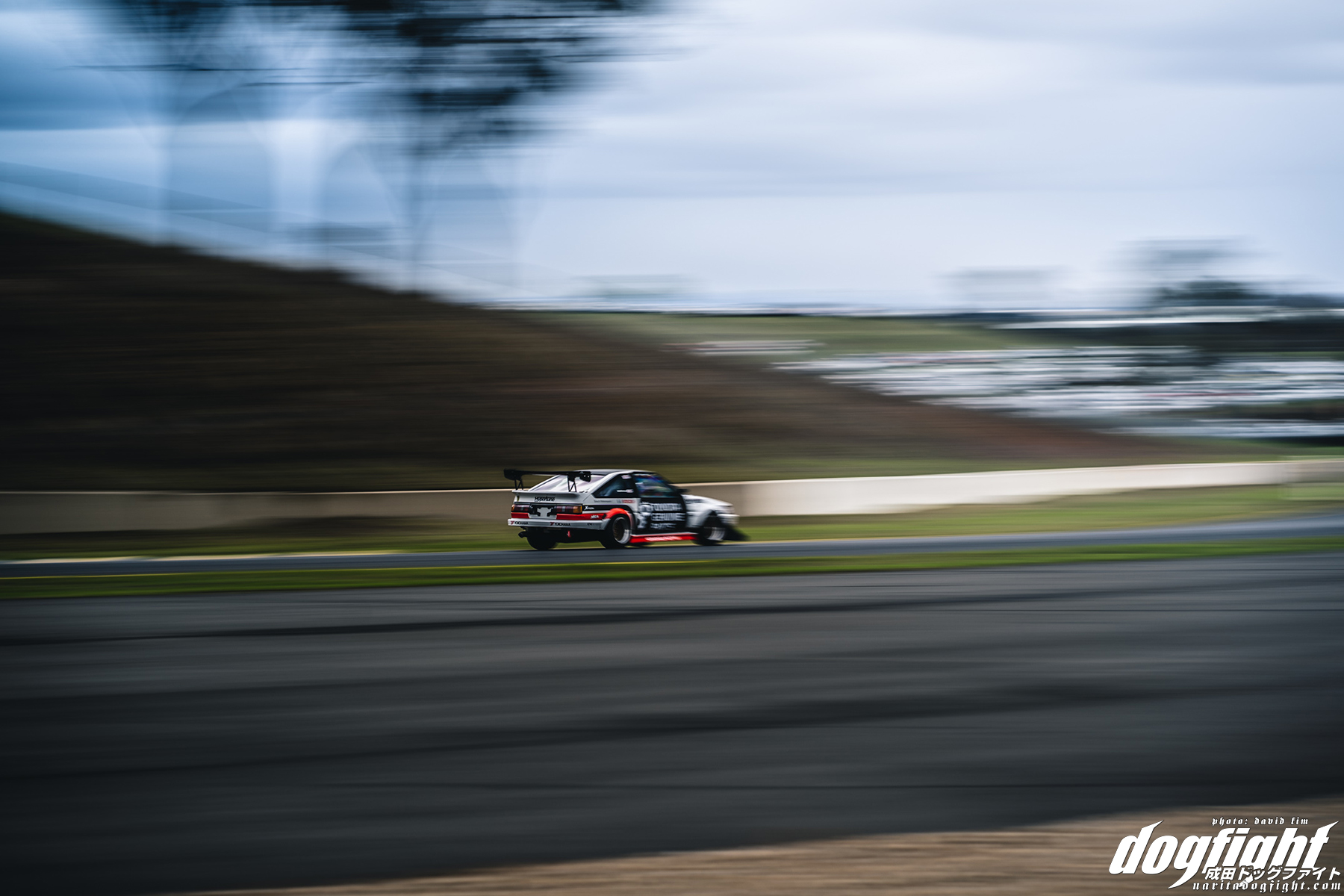 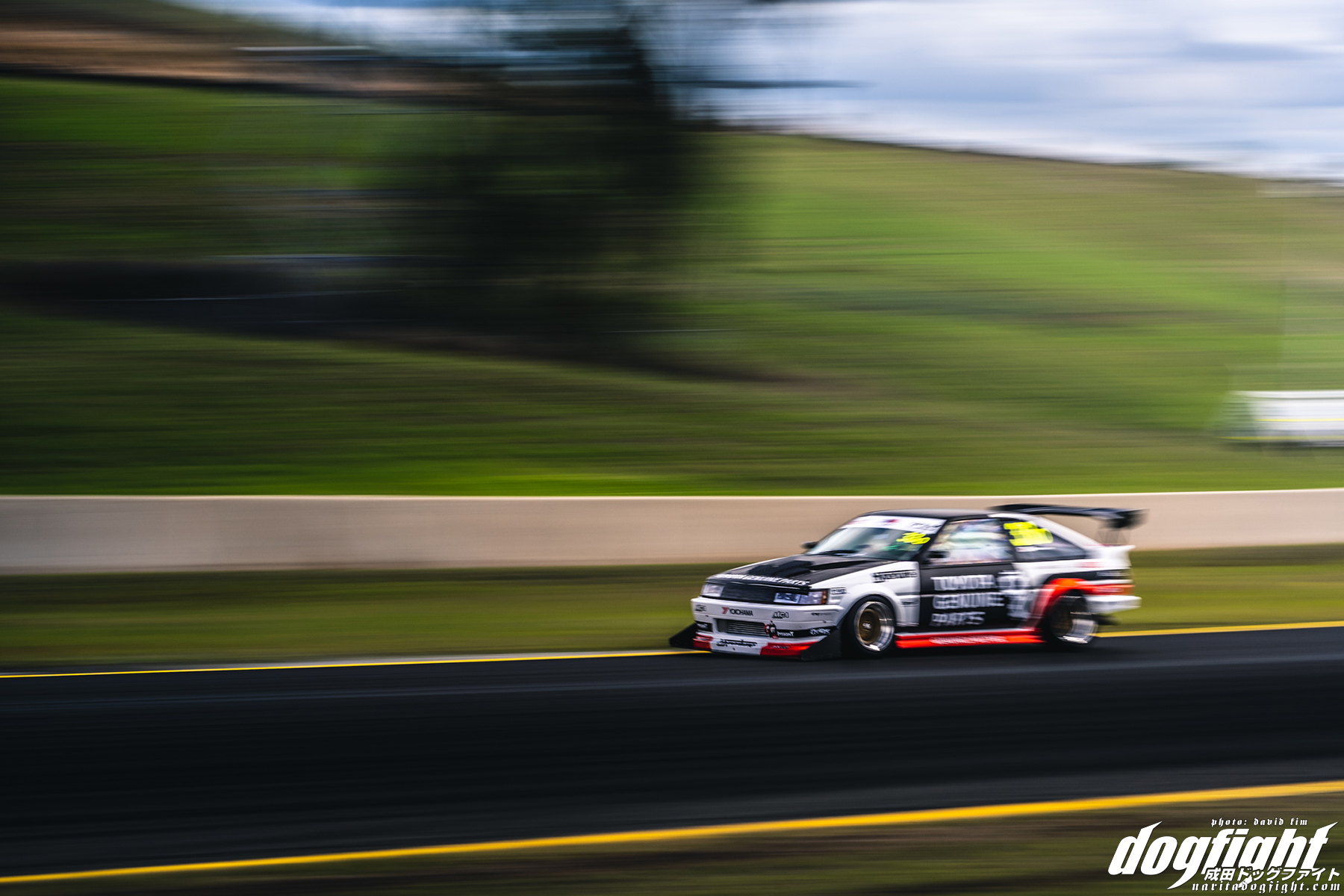 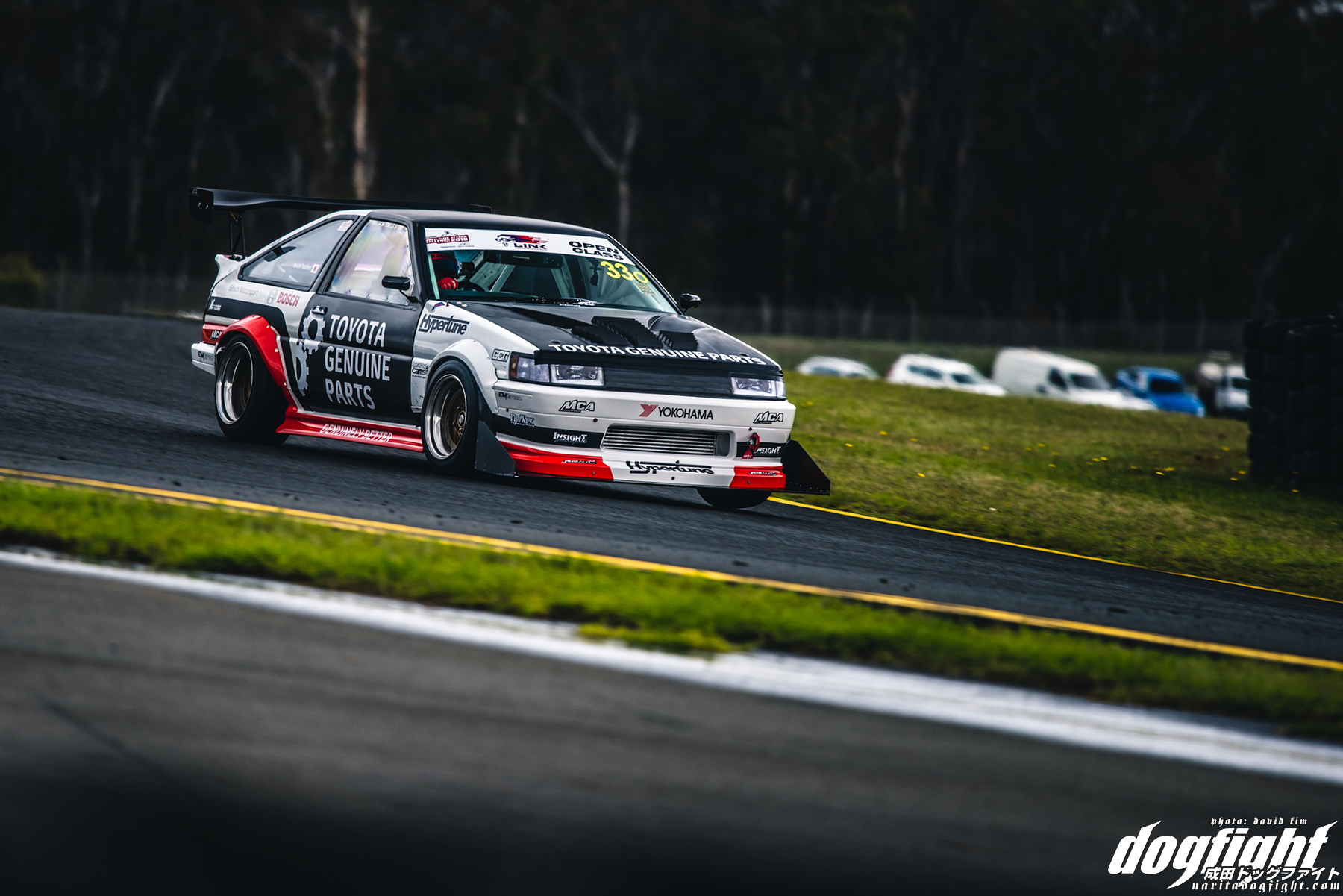 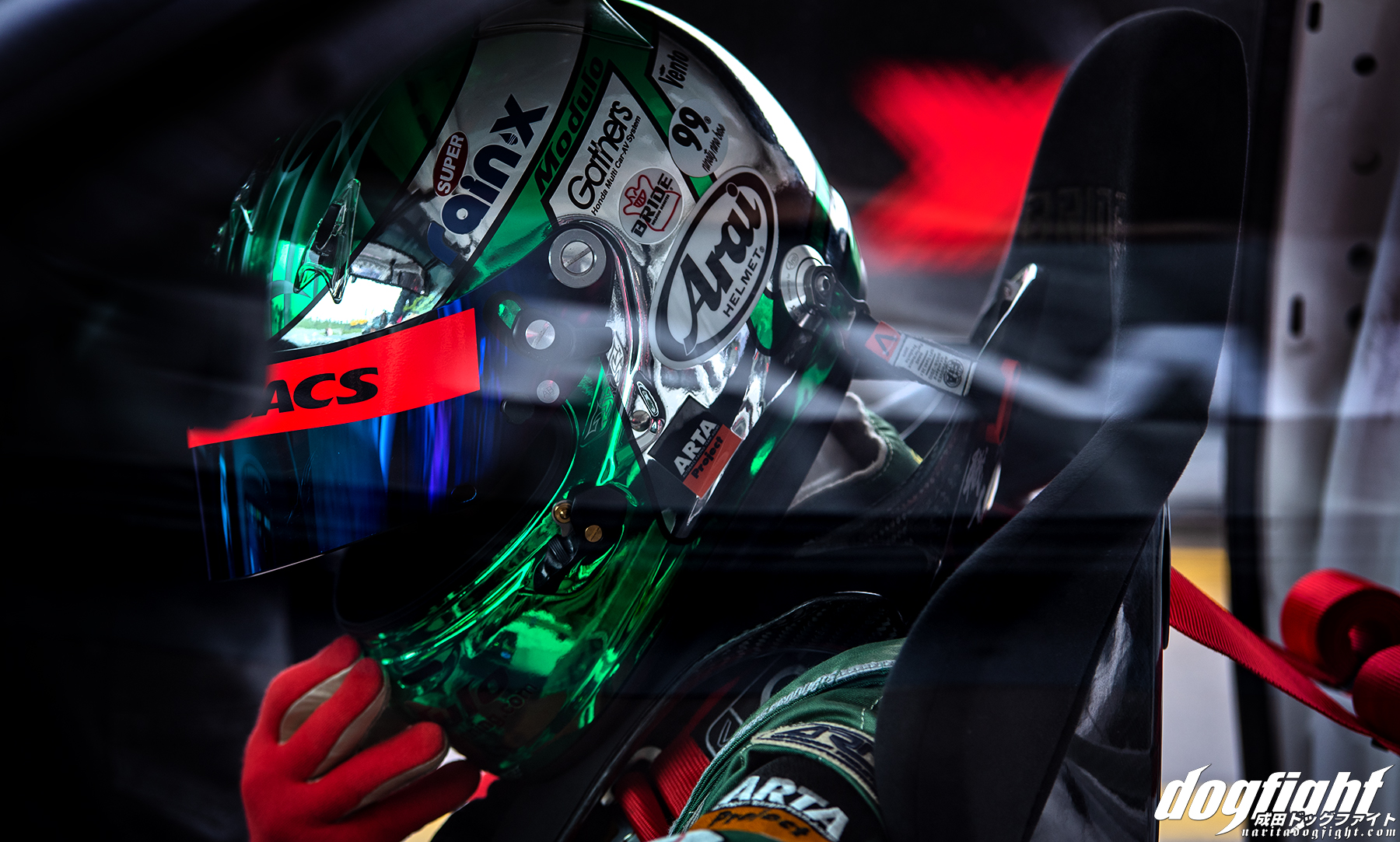