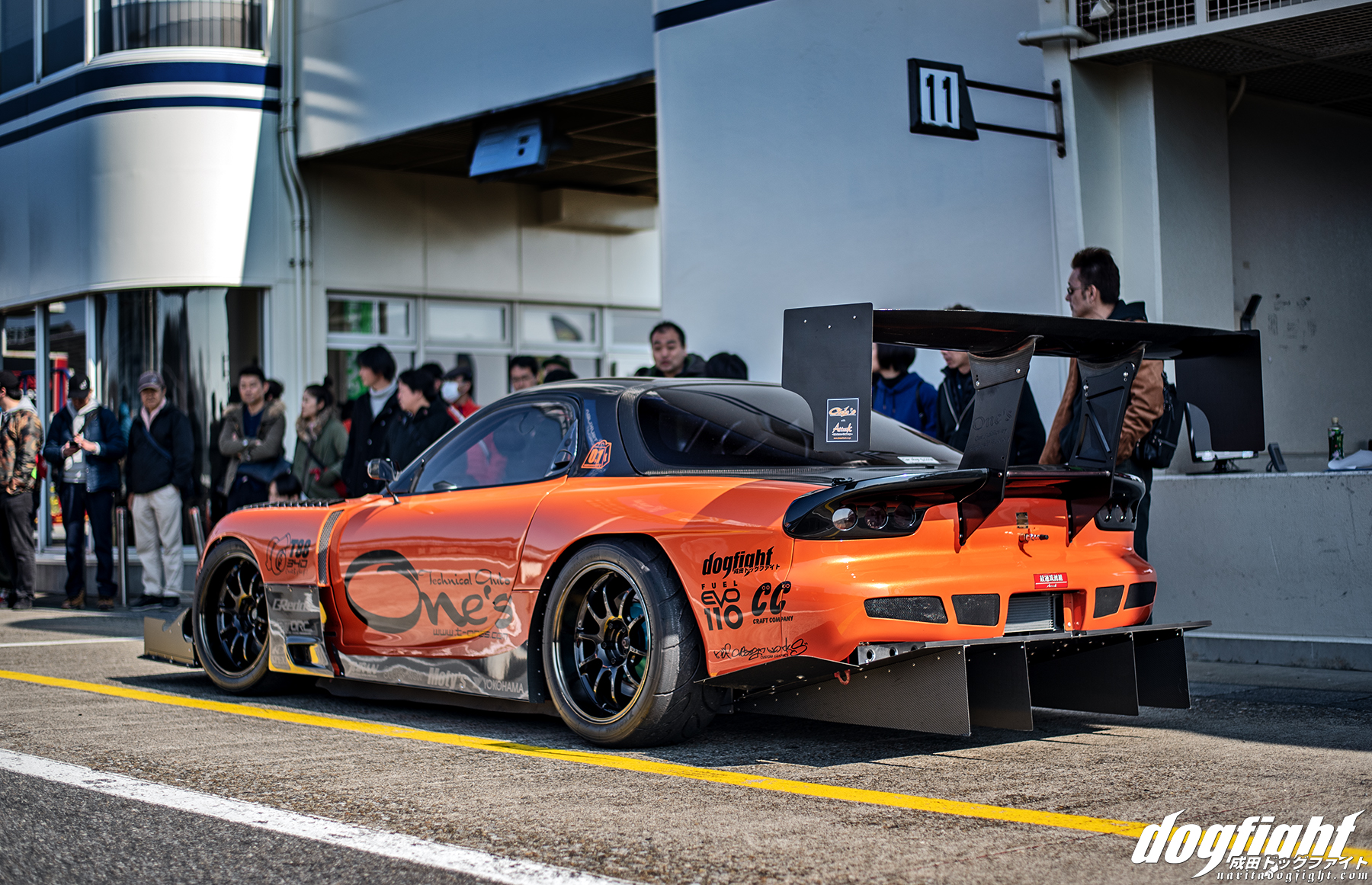 Having always been a very task-oriented person, I often times find myself gravitating more towards the desire of completing a project or event as opposed to the act of simply participating in it.  It wasn’t until the past few years in my life that I was taught to be mindful of the present, or, ‘enjoy the ride’ so they say.  While the wording of that saying may come off as childish and a bit pedestrian, there is merit to being able to live in the moment.  I’ve learned that checking in with yourself existentially every once in awhile can be beneficial.

I don’t think I’m alone in having this mindset, I think perhaps the majority of people are like this.  The constant pressures of life, the expectations we set for ourselves, how we define success; are just a few things that distract us from actually living; that is, being in the moment.  No doubt those are things that we are gifted as we grow older.  As our youth stealthily begins to abandon us, the realities of life set in fairly quickly.  While being an adult can be pretty convenient, it does come with its own set of sacrifices.  No longer can we waste away our Summers in a frenzy of youthful exuberance, or mind-numbingly sit in front of a television all weekend watching Netflix (don’t you have work to do?).  I actually did this a few Sundays ago with a few friends, it was pretty great, but it was also followed by a wave of guilt for not being productive.  Maybe I’m exaggerating a bit, but there is no denying that as we grow older, the amount of tasks that we take on increase exponentially, and along with that busier schedule, we often become less aware of why we do things.

This cycle of day in, day out, task completion can and does get broken though; sometimes willingly, and sometimes by an outside experience.  Unfortunately, a lot of times the opportunity for us to reevaluate the way we view our every day choices comes with a loss of some kind.  It’s the major events as such that make us re-examine our choices in life – both in retrospect and to our futures.  It’s in these brief moments of reprise that we are able to redefine how we perceive each day.  Over the past couple years, as avid readers may recall, I’ve learned that it doesn’t have to be one or the other. That is, aiming to strike a balance between only seeing the end result vs. being carefree and present is very possible.  Recently, I’ve discovered the link between the two, and it’s surprisingly simple: a continuous awareness of motive.

The reasoning behind why we do things is the the deciding factor in most of our actions, but ironically enough, it’s the first thing we forget once we’re absorbed in the work it takes to complete them.  If somewhere down the line, I had lost awareness of why I involve myself with Japanese time attack in the capacity that this website requires of me, this past weekend sure hit it home for me.  Bearing witness to a community uniting together not just in remembrance, but in tribute and intention, was enough justification to last a lifetime.  There is genuine meaning in most everything we do (or at least there should be), and to see the cumulative celebration of that meaning, by a community that helped build it, solidified my decisions in what I’m doing. 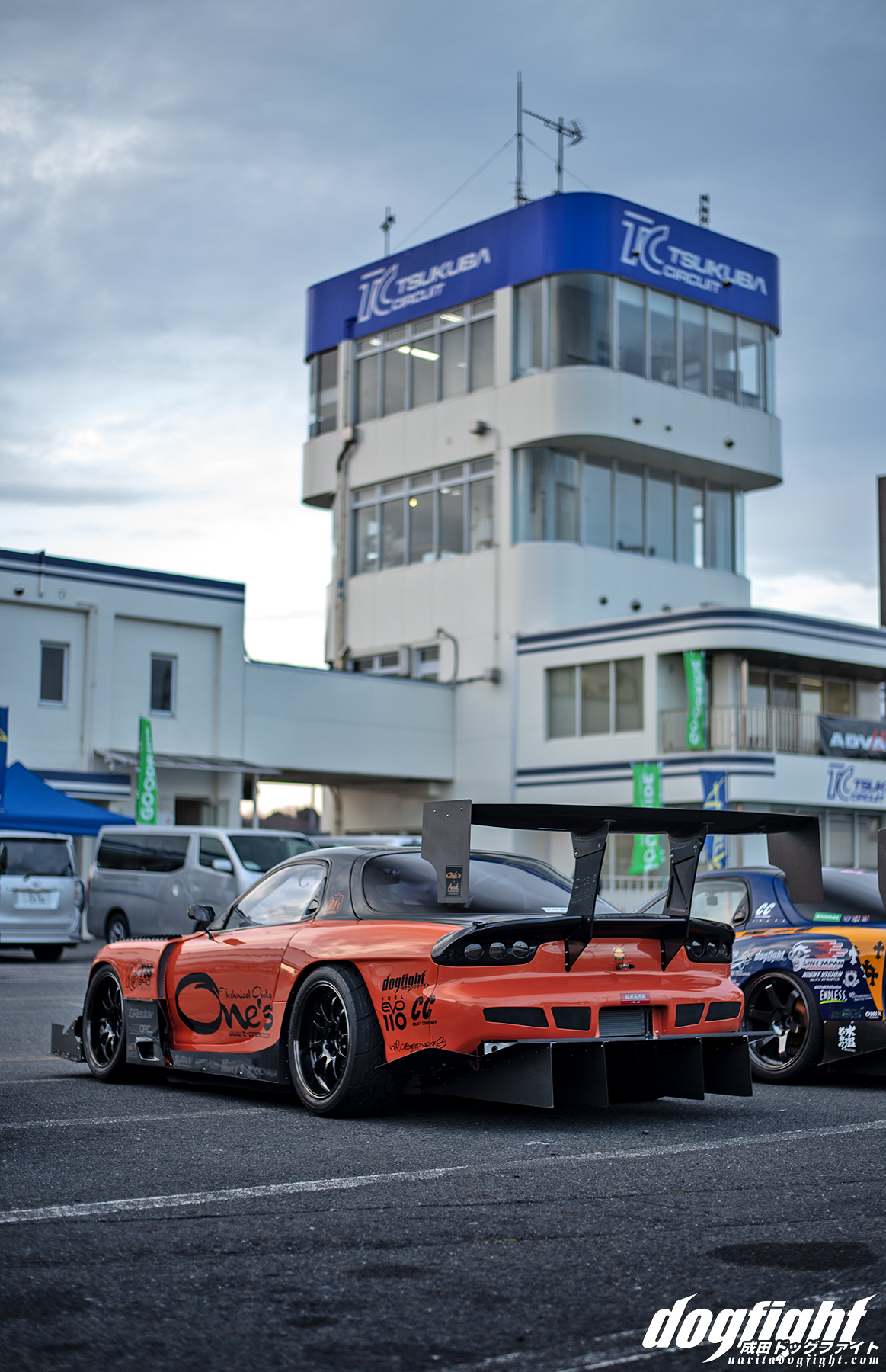 Kazuyuki Takahashi was a very influential player in Japanese motor sports.  A dedicated pioneer in rotary tuning, you’d be hard pressed to find a true Mazda fan who doesn’t know the name, or the shop Technical Auto One’s.  He’s worked on several of Japan’s fastest time attack cars, and beyond that he’s had his hand in tuning the infamous Mazda 787B.  T-One’s is a shop that is synonymous with quality, and Kazuyuki was the driving force behind that.  Above all, however, he was simply a great guy.  I had the great fortune of befriending him, visiting the shop, seeing him often at events, and working with him on a few of my own journalistic projects.  My personal experiences with him as a friendly acquaintance, however, are insignificant to the community that he affected in Japan and around the world.  His recent passing was one of those aforementioned moments of loss that can change the way people look at their daily life; the way the community reacted is proof of that.  It was this reaction that sort of jolted me out of my routine, and reminded me of my own why:

I’m lucky to be a part of this community; both in Japan and the US. 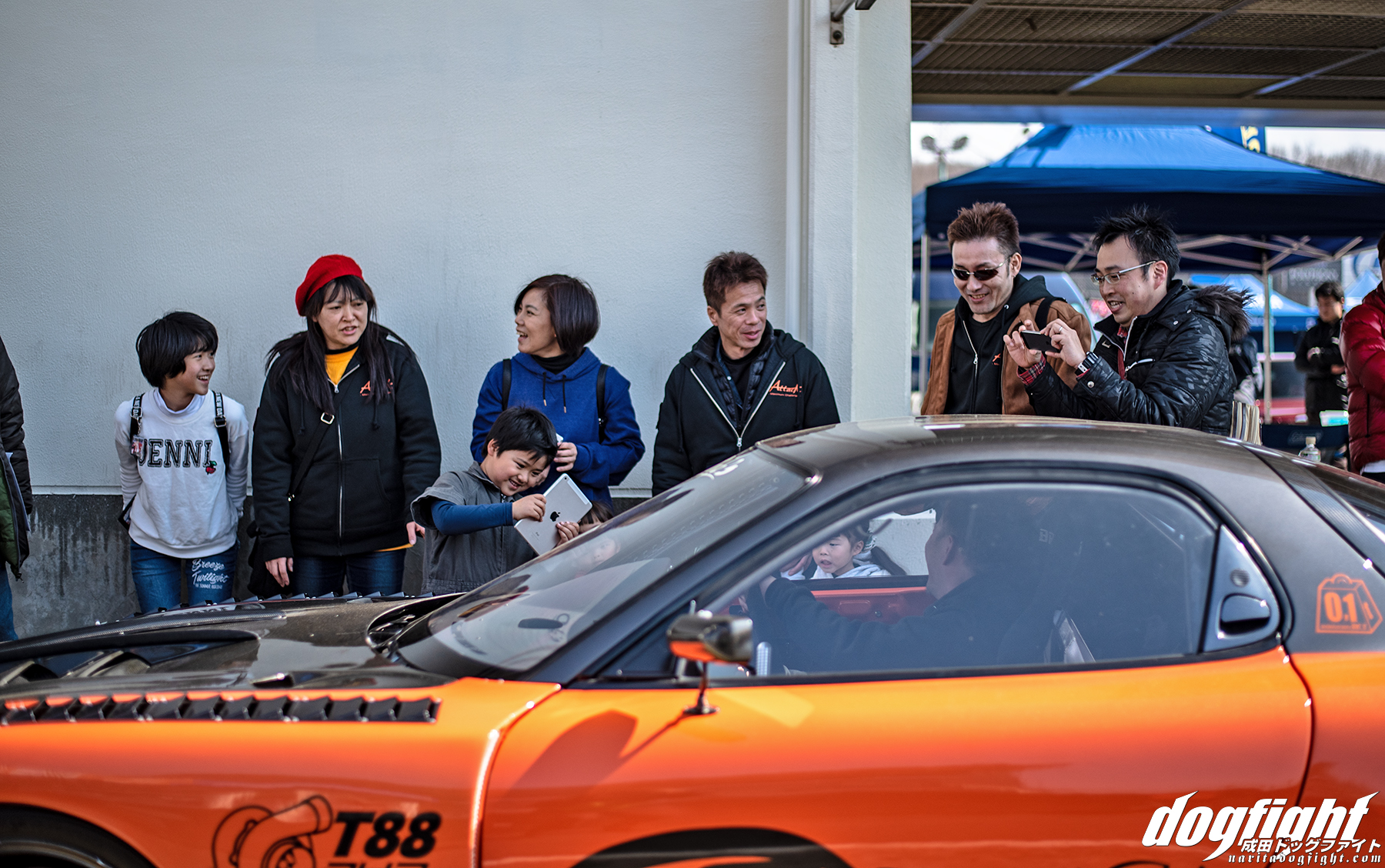 Takahashi is left behind by his wife, Masuyo, and his two children.  His family, some close friends, and the organizers of Attack, namely Aoki and Yukimitsu, used this year’s Attack Tsukuba event as a venue to illustrate the impact he had on time attack in Japan, and to celebrate his accomplishments.  Having made the decision to preserve his personal FD build was one I think everyone was thankful for.  To hear that they would keep the car in it’s own garage behind the family home, with intentions of the son driving it when he comes of age was an idea straight out of a Japanese drama.  The story of a continued legacy; doesn’t get much more heartfelt than that.  It also shows that cars serve a higher purpose than just being driven.  Not a means to an end, but a continuing extension of a person.

Yukimitsu cleaned up the car and hauled it out to Tsukuba on a flat-bed early Saturday morning to display in front of our booth.  In the intermission of the event, he drove TC2000 one last time in a parade lap – with Yukimitsu being close friends with Kazuyuki, I can image it was an emotional drive for him. 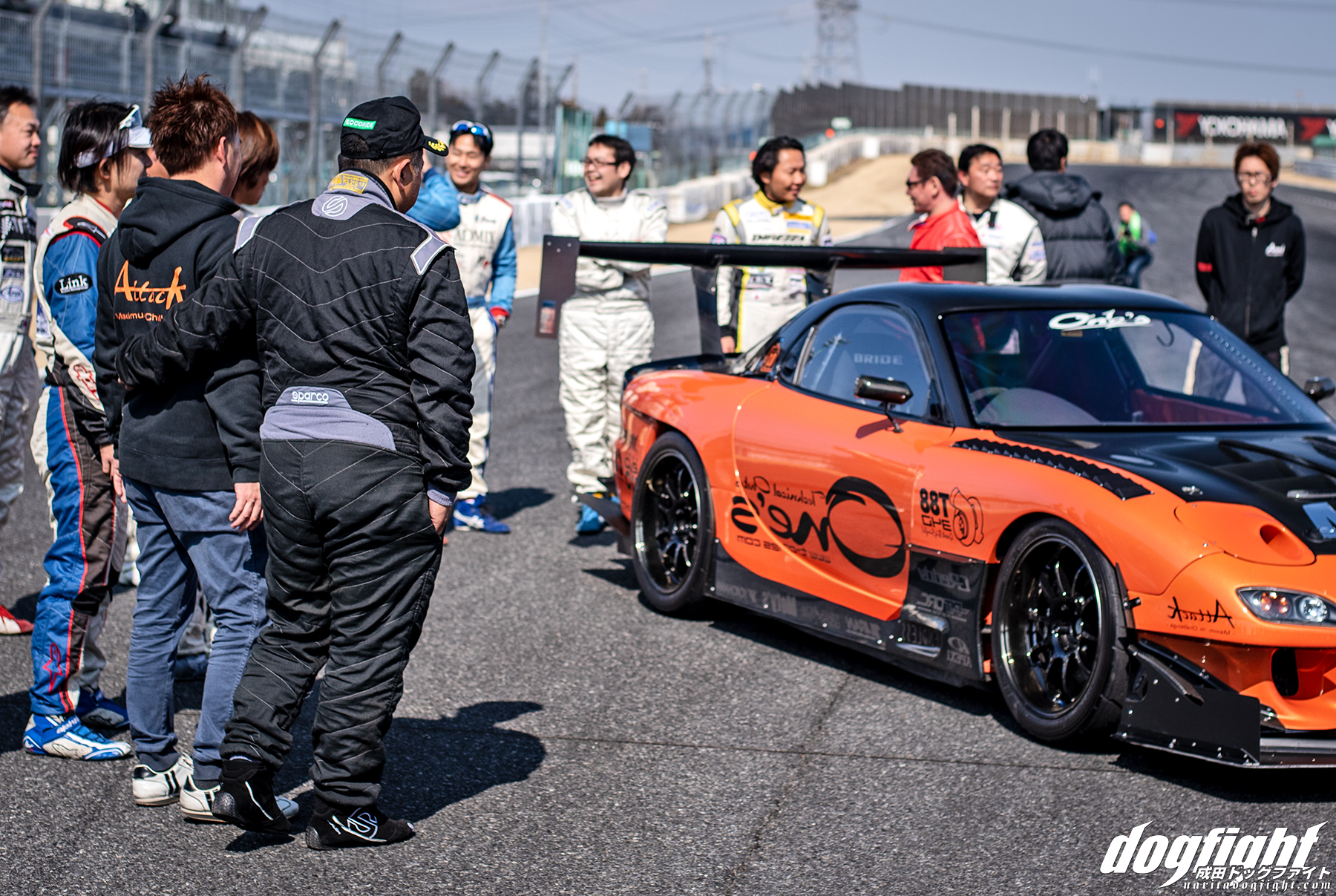 The FD exudes so much personality that is distinctively owned by Takahashi, that it was almost as if he was there himself.  Having a car that is unmistakably synonymous with your character is proof, to me at least, that cars are much more than machines.  As I wrote on our Instagram page the evening after the event:

“..cars are a tangible extension of our lives. They become our friendships and communities. They are our goals and aspirations. They are our purpose and livelihoods. They make the world a smaller place. Today reminded us of that.”

I’m sure we’ve all experienced a moment like this that solidify our confidence in our involvement in racing and cars in general. 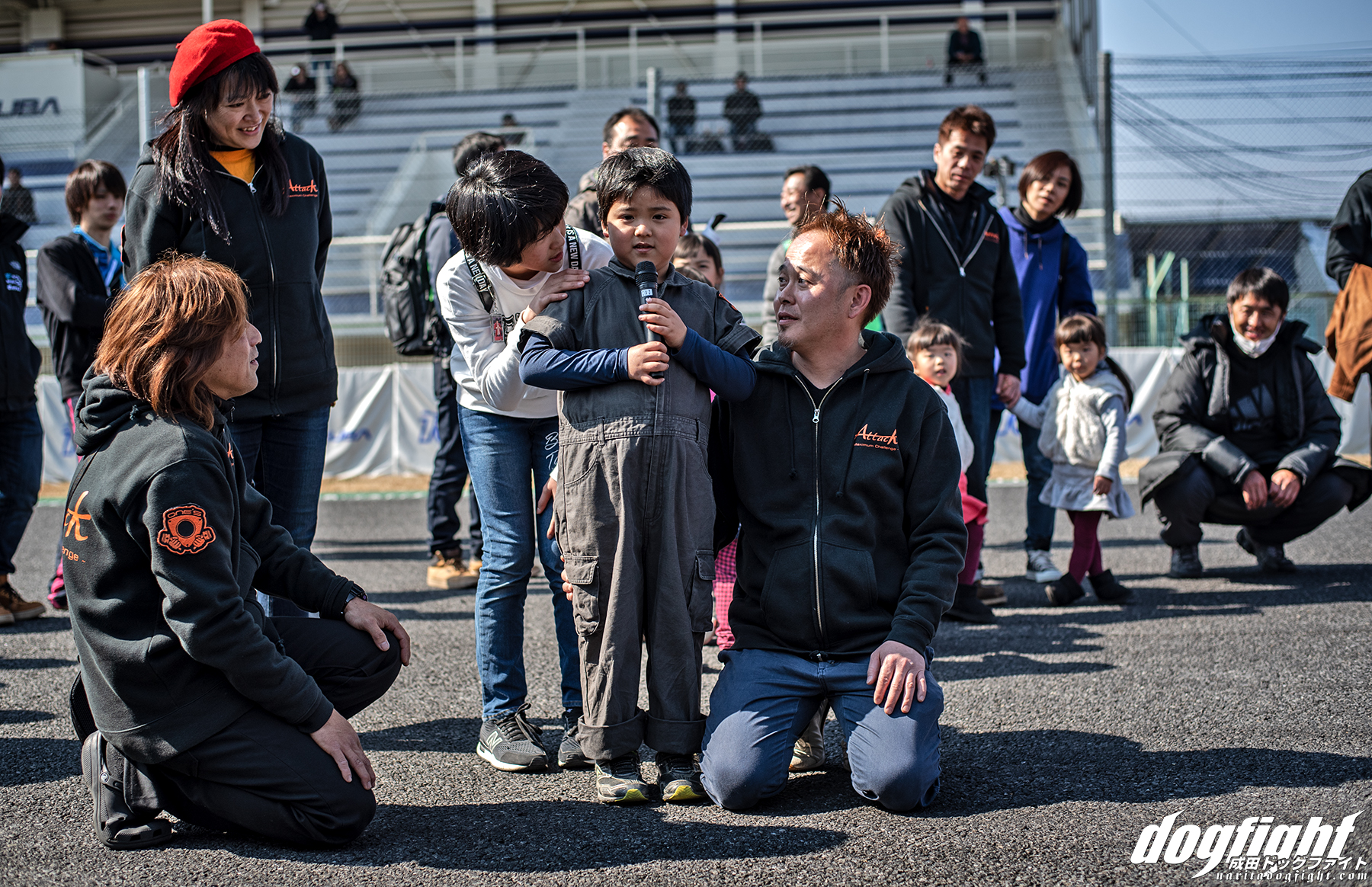 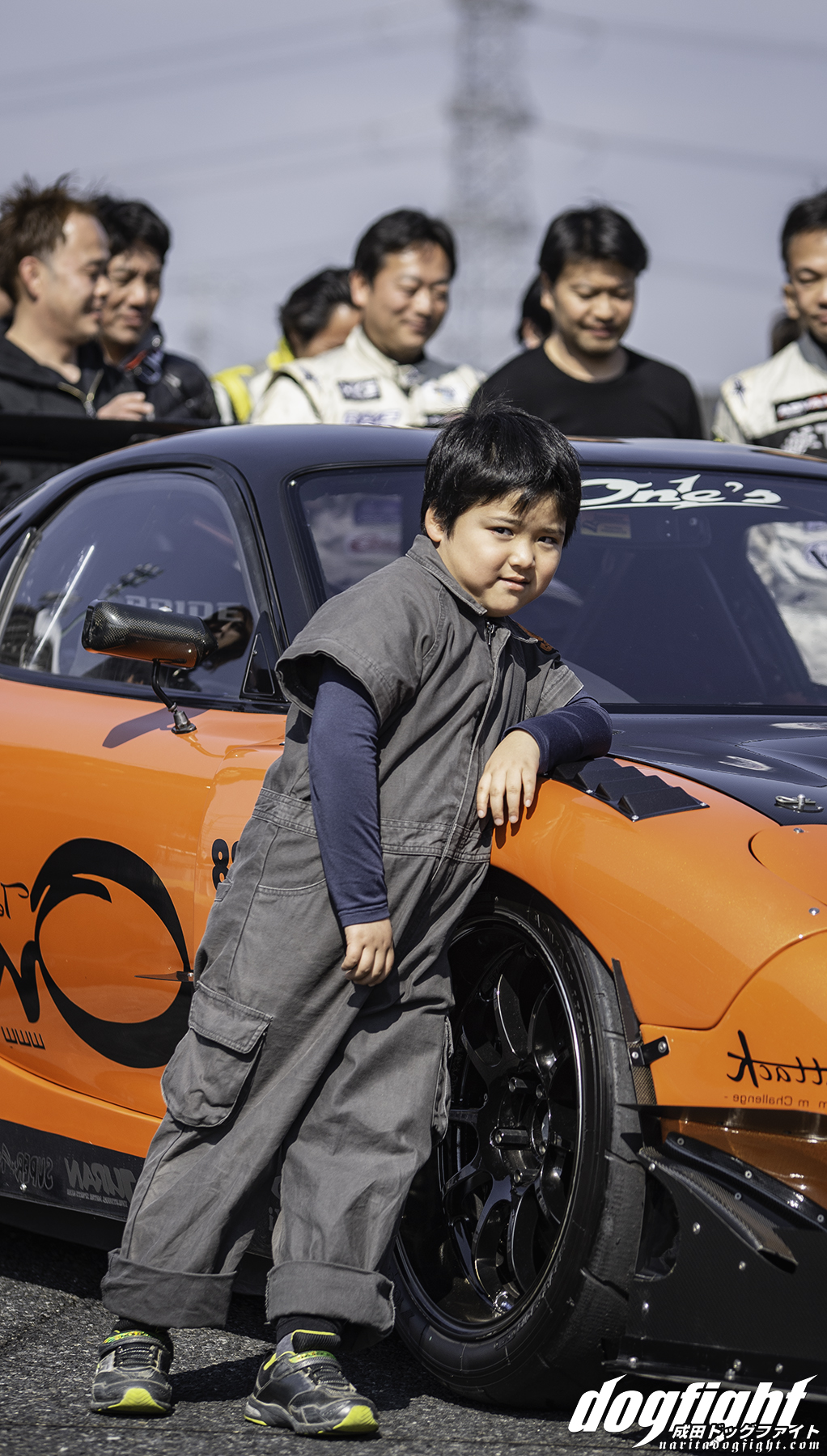 A regular chip off the old block. 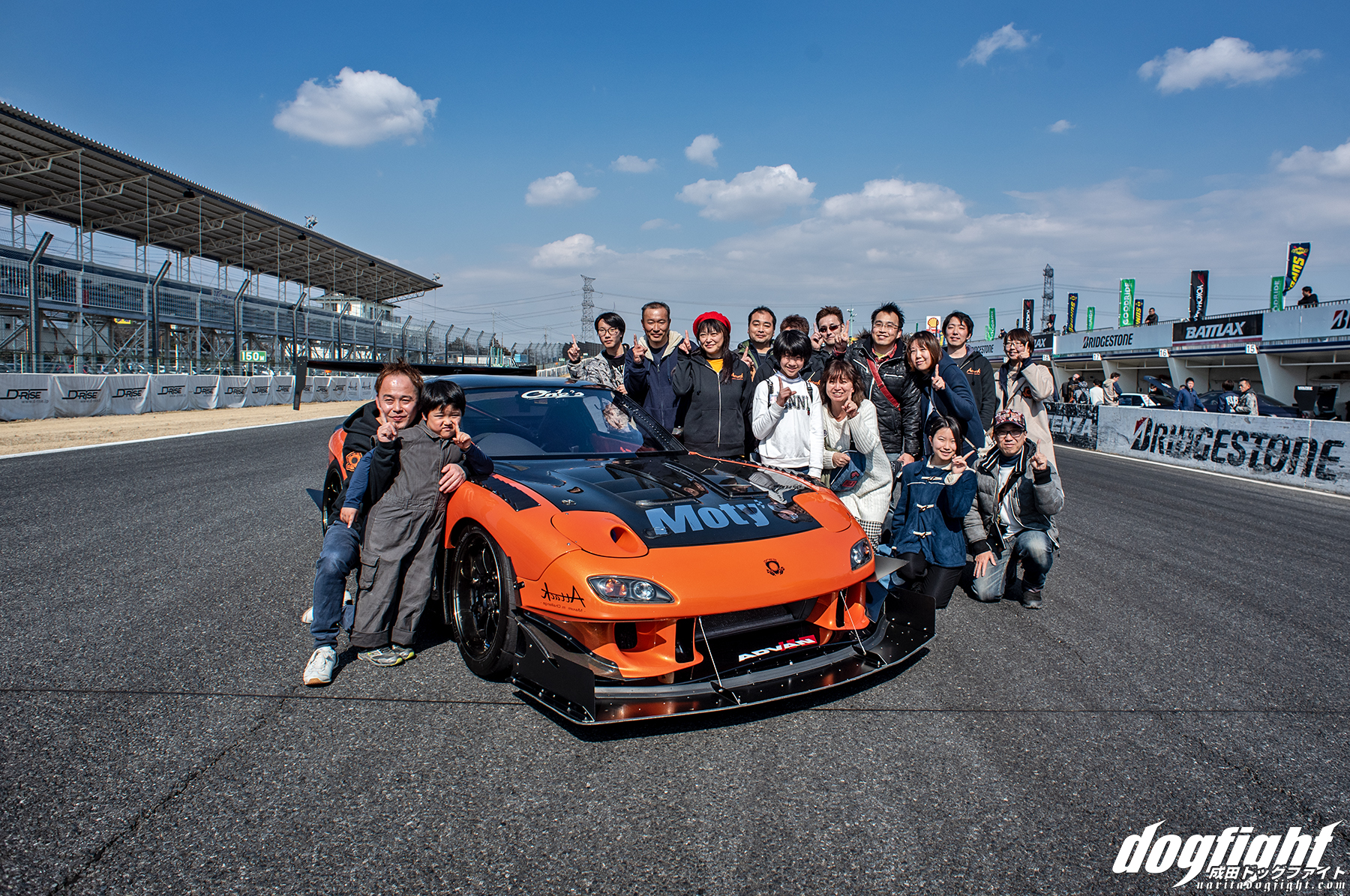 A group photo with family, T-One’s staff, and close friends. 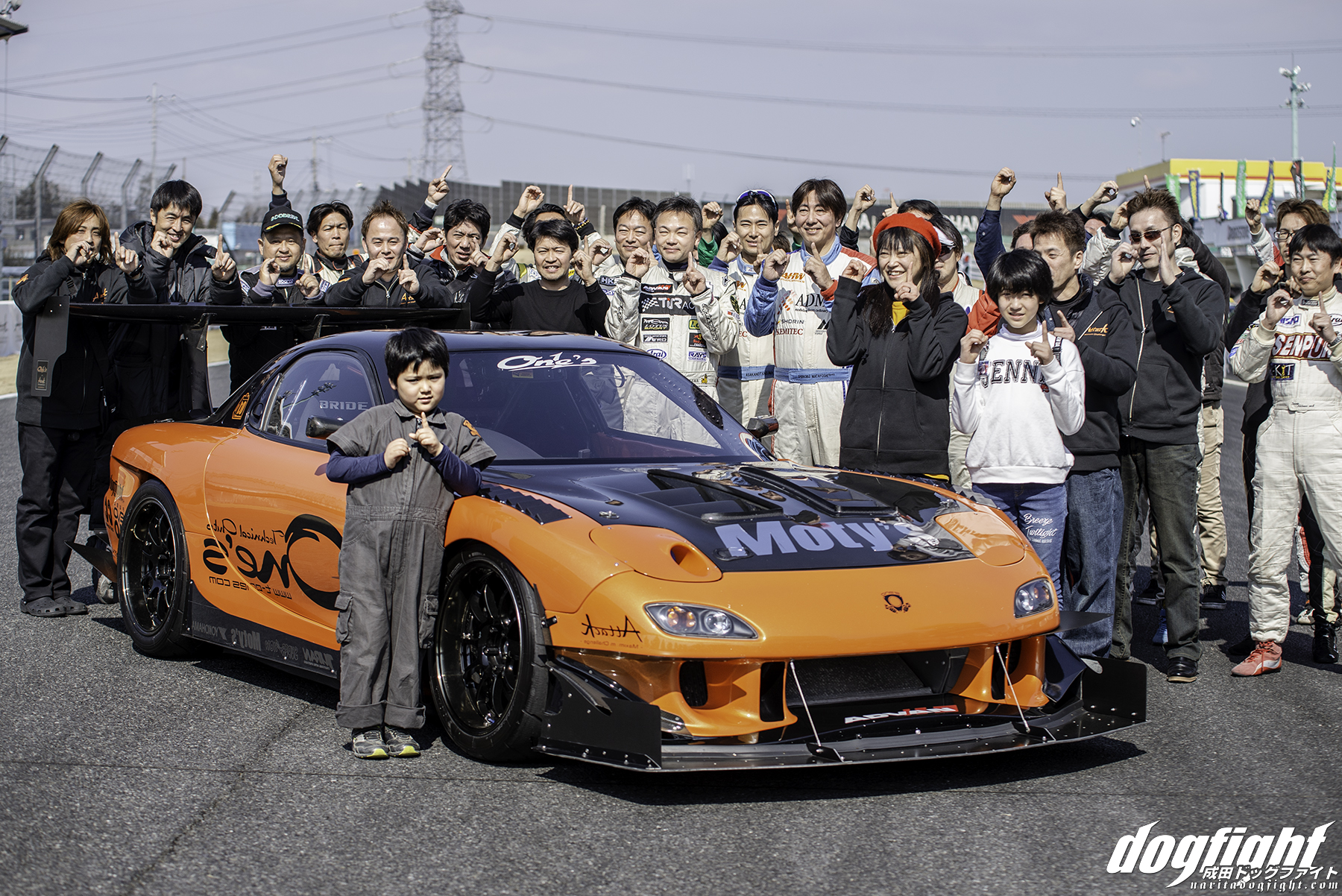 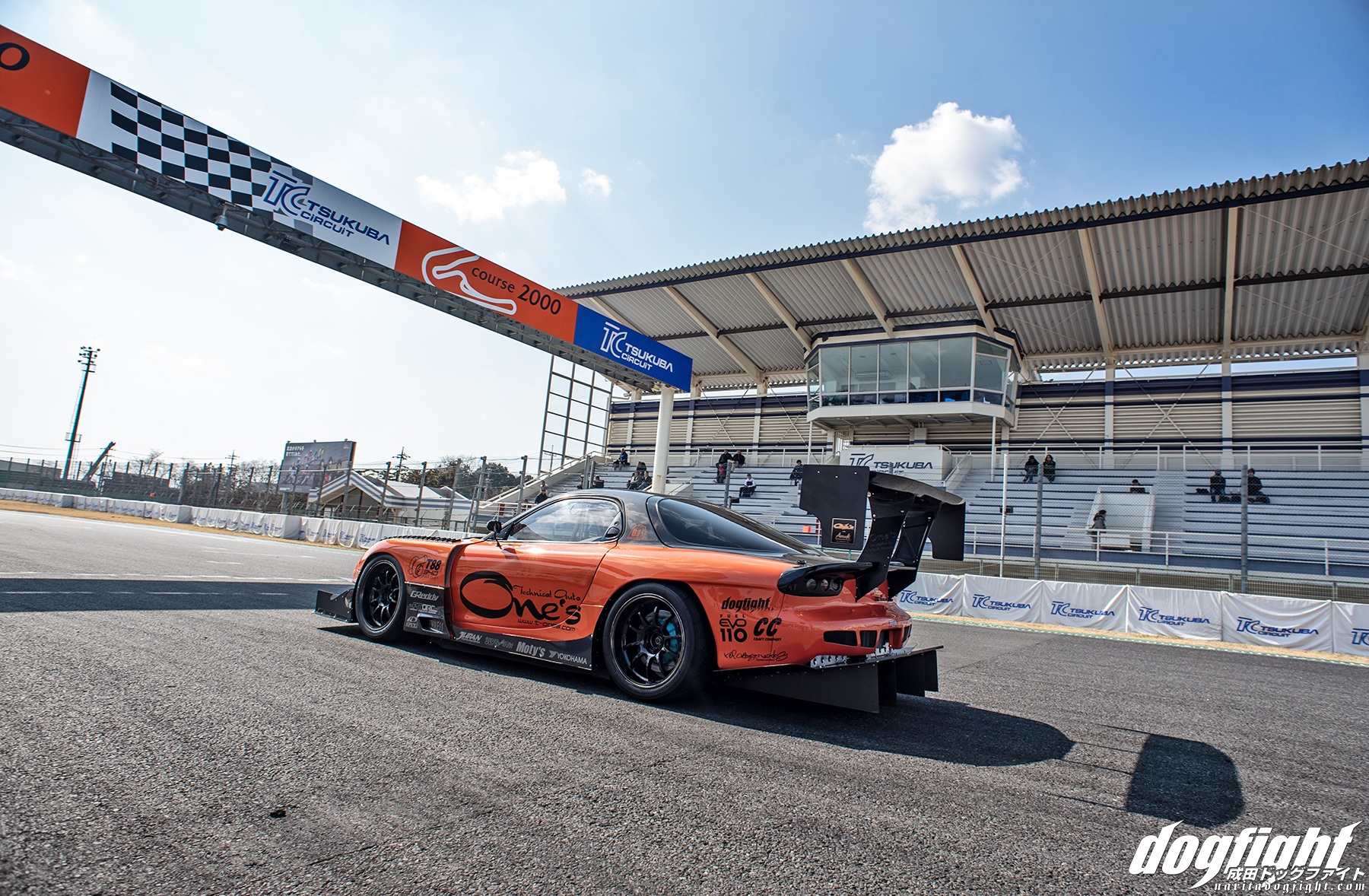 The last time we’ll see this car on track for quite awhile. 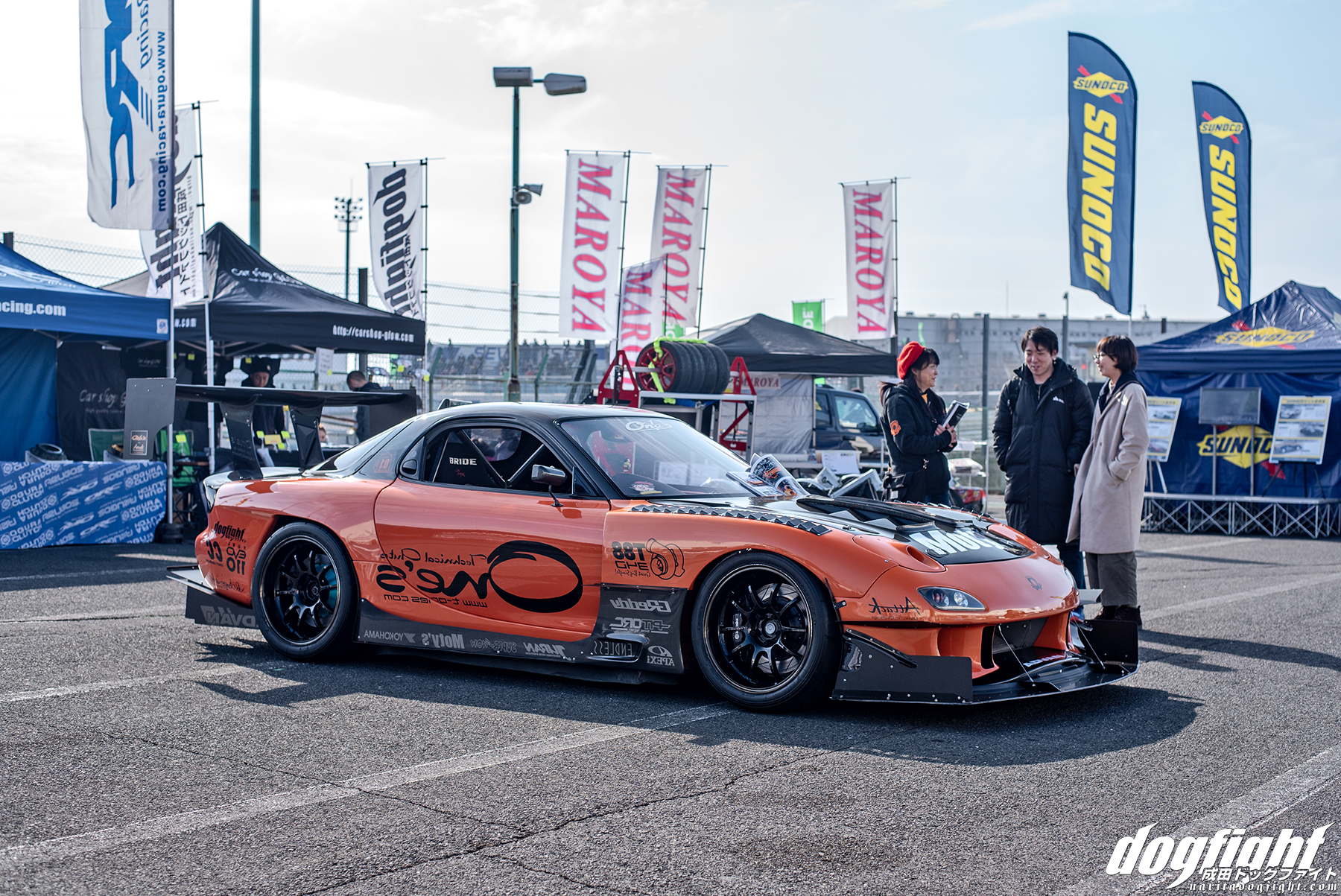 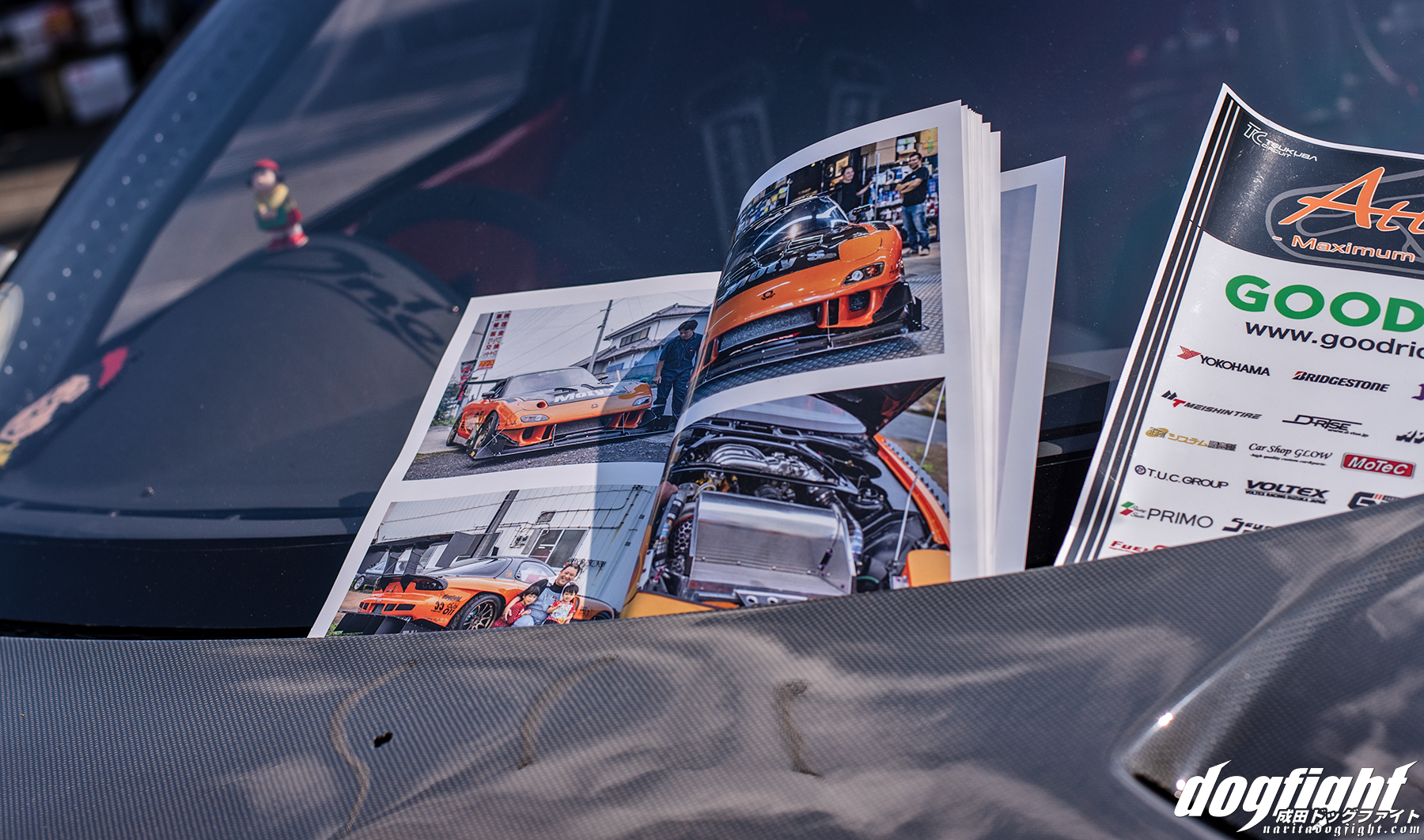 Masuyo placed a copy of 80R featuring Takahashi on the car for people to view.  Interviewing him for the book was the last time we spoke.

I didn’t know Takahashi well enough to know whether or not he ever had moments of doubt about his path in life.  It’s not like we ever had any deep, philosophical talks about life, nor would my Japanese allow for such a conversation.  If I did have to venture a guess based off of our talks, I’d say he was quite sure of himself.  Judging on the impact he’s had on people, and how much he was celebrated this weekend, it’s easy to see that he sure knew why he was doing it.