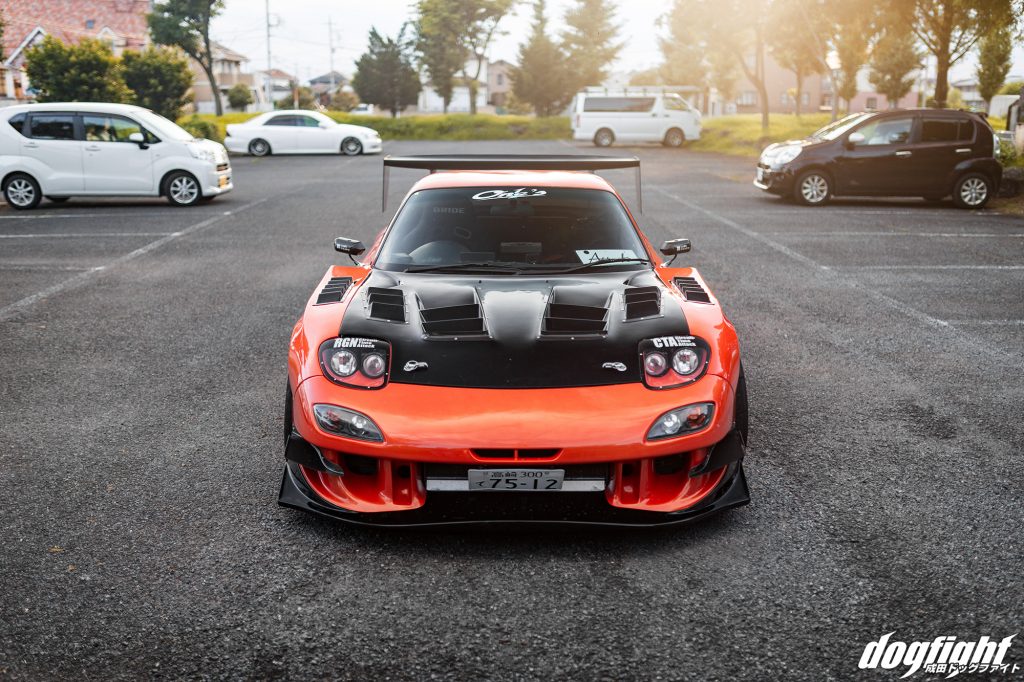 Since we last spoke in person back in February, Sato has been keeping me filled in on the progress of his FD build over the past few months.  Determined to have the car ready for Attack next season, the progression has been rapid to say the least.

When the owner of Technical Auto On’es, Kazuyuki Takahashi, passed in November of 2018, he left behind him a wake of inspiration.  Motivating those involved in time attack to continue forward in pursuit of accomplishing their goals, and influencing a younger generation to pick up where his crown had come to rest.  Among those greatly influenced by his work, was a young man from Takasaki City, Gunma.

Growing up with One’s as the local tuning shop, it’s almost as if Sato’s interest in the rotary powered FD3S  had been predetermined.  At the very least, having some of Japan’s coolest and most powerful RX7 builds come and go regularly from his local tuning shop would harbor a bias in even the most resilient minds.  But the fact that Sato already had an affinity for the popular chassis pretty much sealed his future.  Working as a Mazda mechanic at a local garage, Sato became friends with the staff at Technical Auto One’s, no doubt drawing on their knowledge to grow his personal skill.  It didn’t take long for him to save up enough money to purchase a FD of his own and begin to put his personal touch to the car he had grown to love. 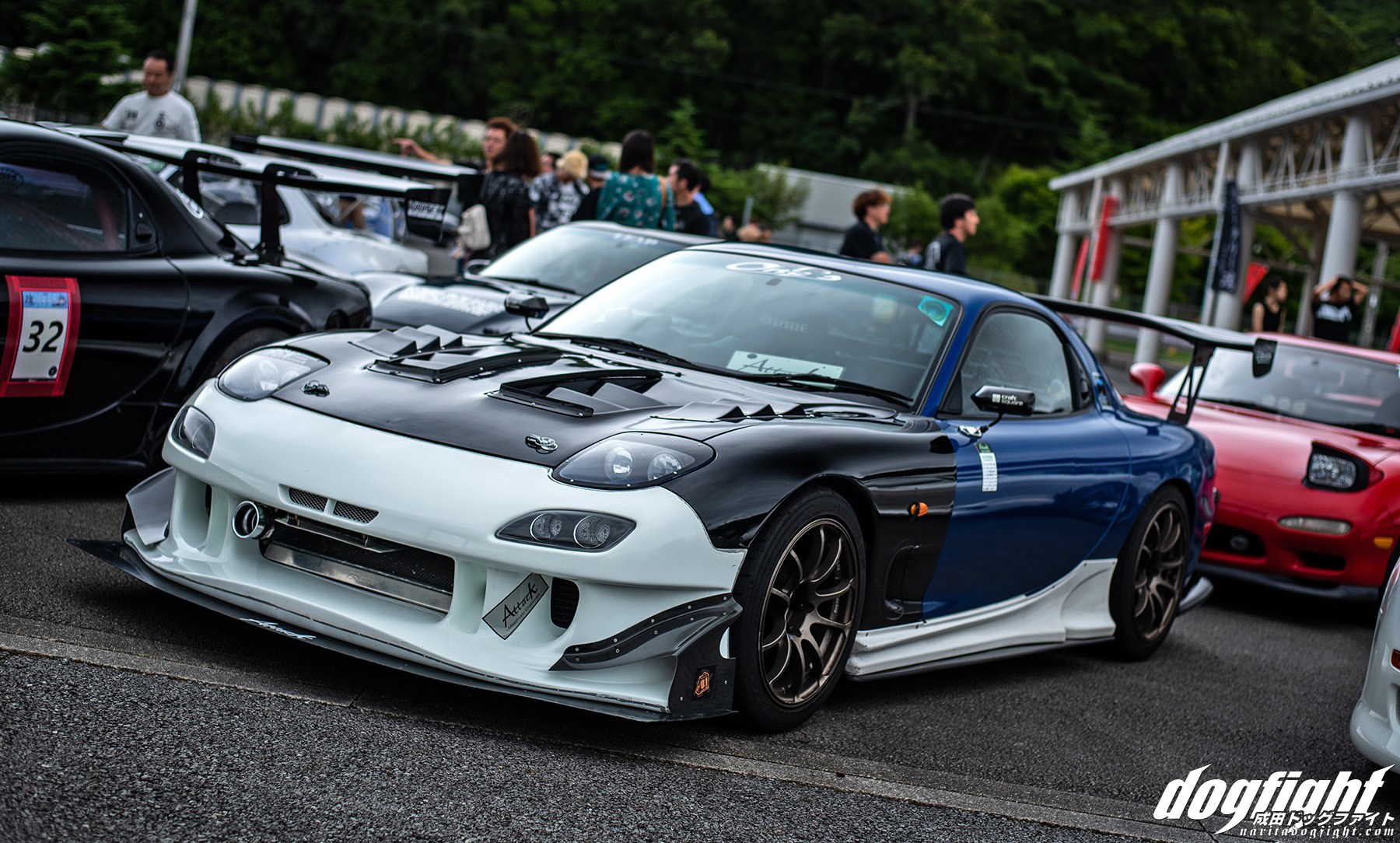 A year ago in July of 2019, at the Seven’s Day event at Fuji Speedway, the car was very much in an ‘in progress’ state.  Various RE bits adorned the exterior, some painted, some awaiting body work and paint. 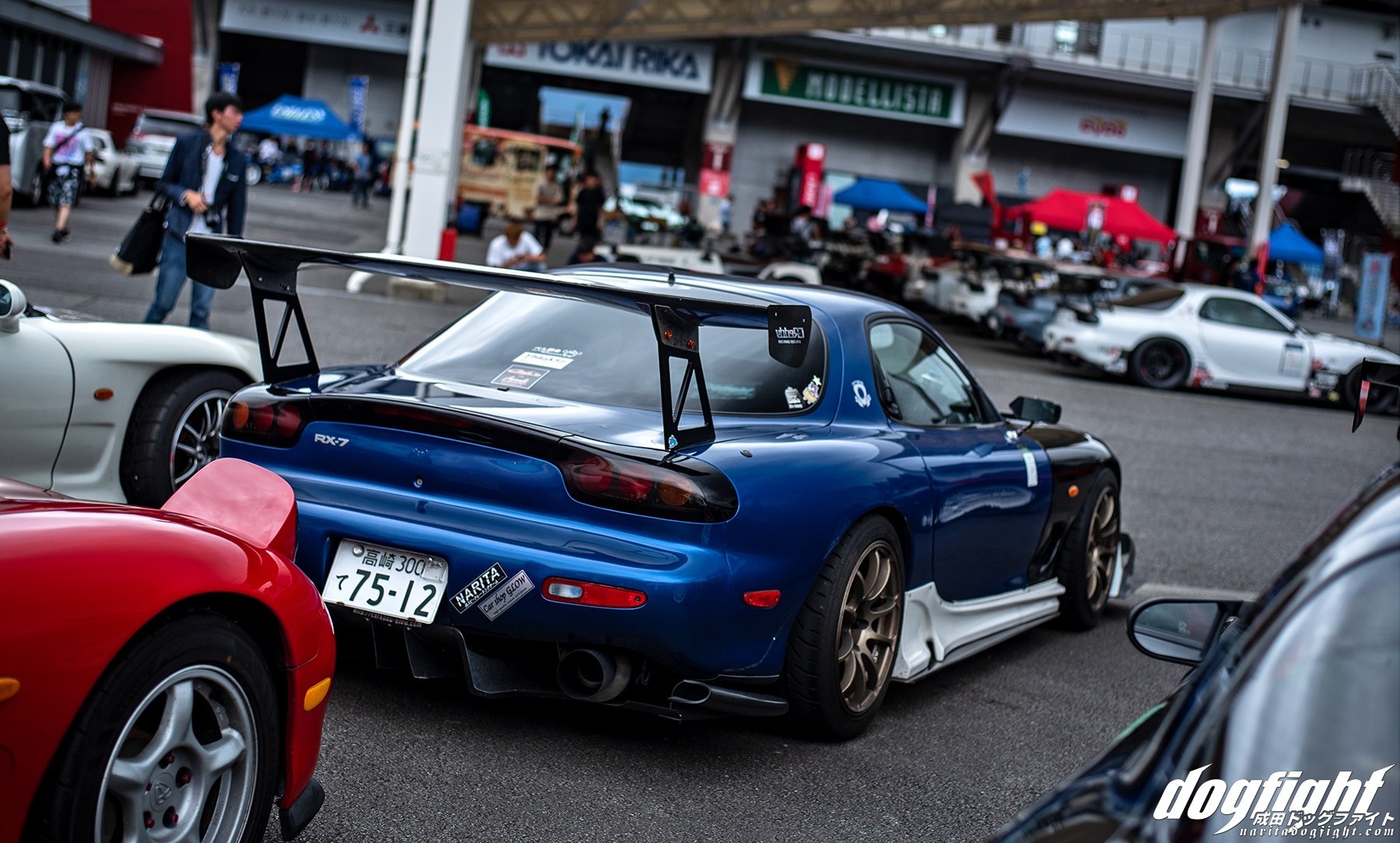 Back then I had mentioned for everyone to keep an eye on this build, as the owner had very ambitious plans for the car.  It didn’t take long for my prediction to surface as just one year later the car’s exterior is all but finished with a custom selection of parts. 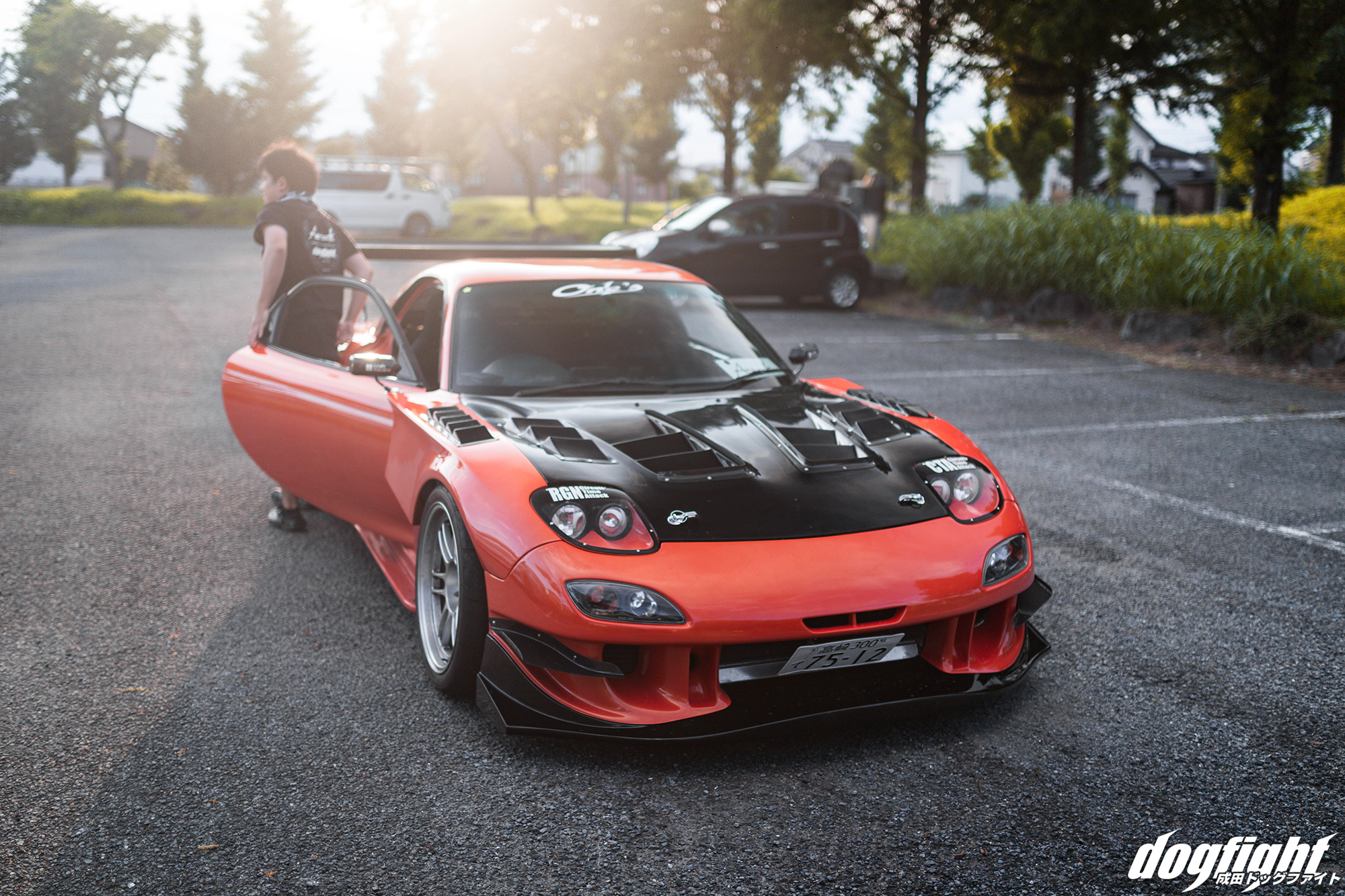 At first glance, the car is very much a tip of the hat to Takahashi’s bright orange FD; and it’s not wrong to assume this.  The color selection is purposeful in that regard, although choosing his own variation of orange from a Porsche 911 GT3RS with a hint of golden pearl.   However, the emulation of One’s demo car wasn’t Sato’s main goal; in fact, quite the opposite.  Being inspired by someone does not mean to mirror their choices, but rather use them as a way to propel you forward in your own way.  And that’s just what he did. 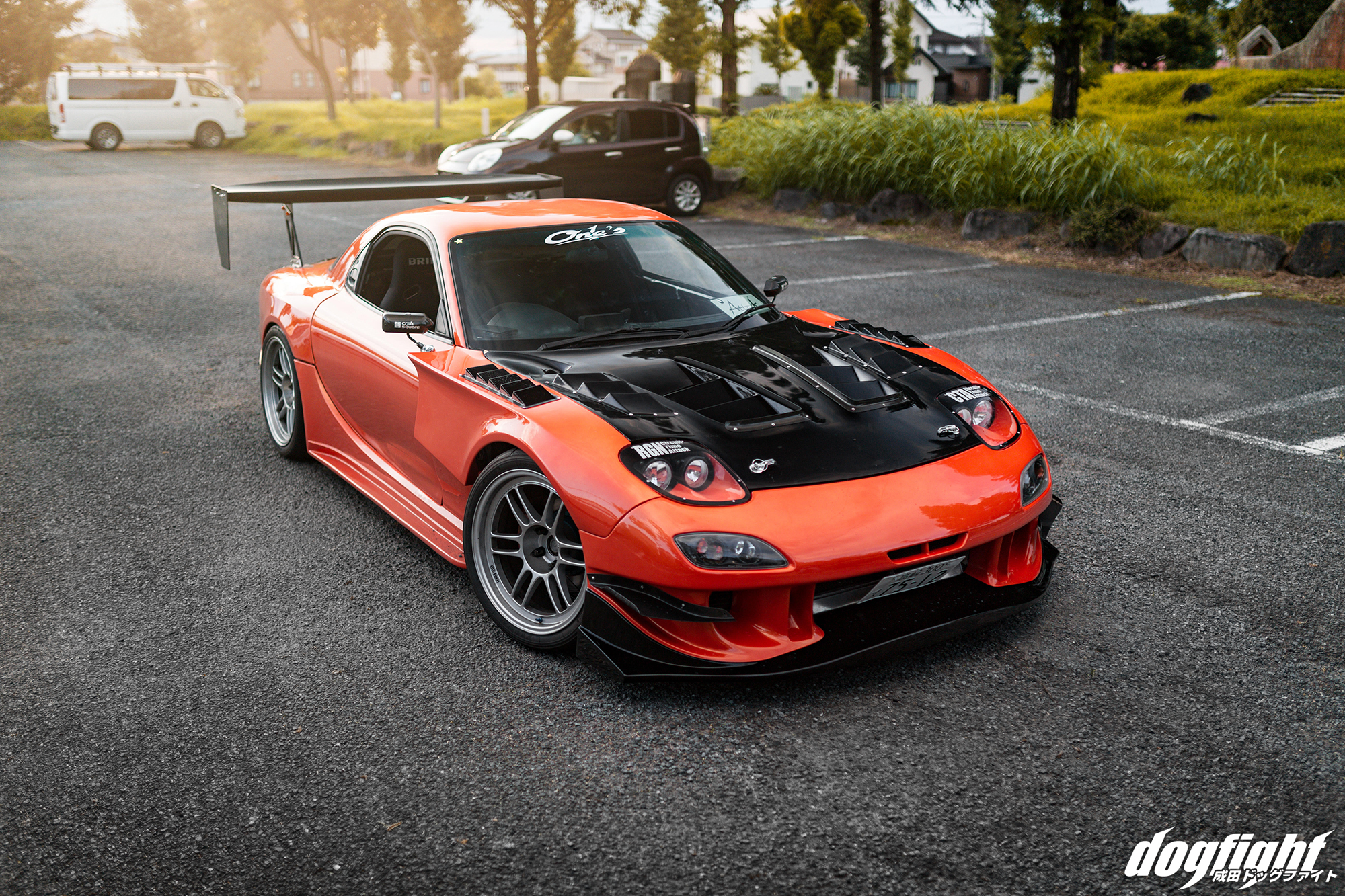 The RE Amemiya N1 front bumper and N1 canards that make up the front end, is connected at either end to custom fitted TCP Magic G-Face wide fenders.  Speaking out of bias, the combination of TCP fenders and RE bumper is actually better aesthetically than the TCP kit as a whole.
While the car was at the body shop, Sato also had RGN vents fitted to the tops of the fenders to help alleviate trapped air. RGN vents also adorn either side of the RE vented hood.
Craft Square mirrors make their home just behind the fenders and give Sato plenty of visibility and good looks. 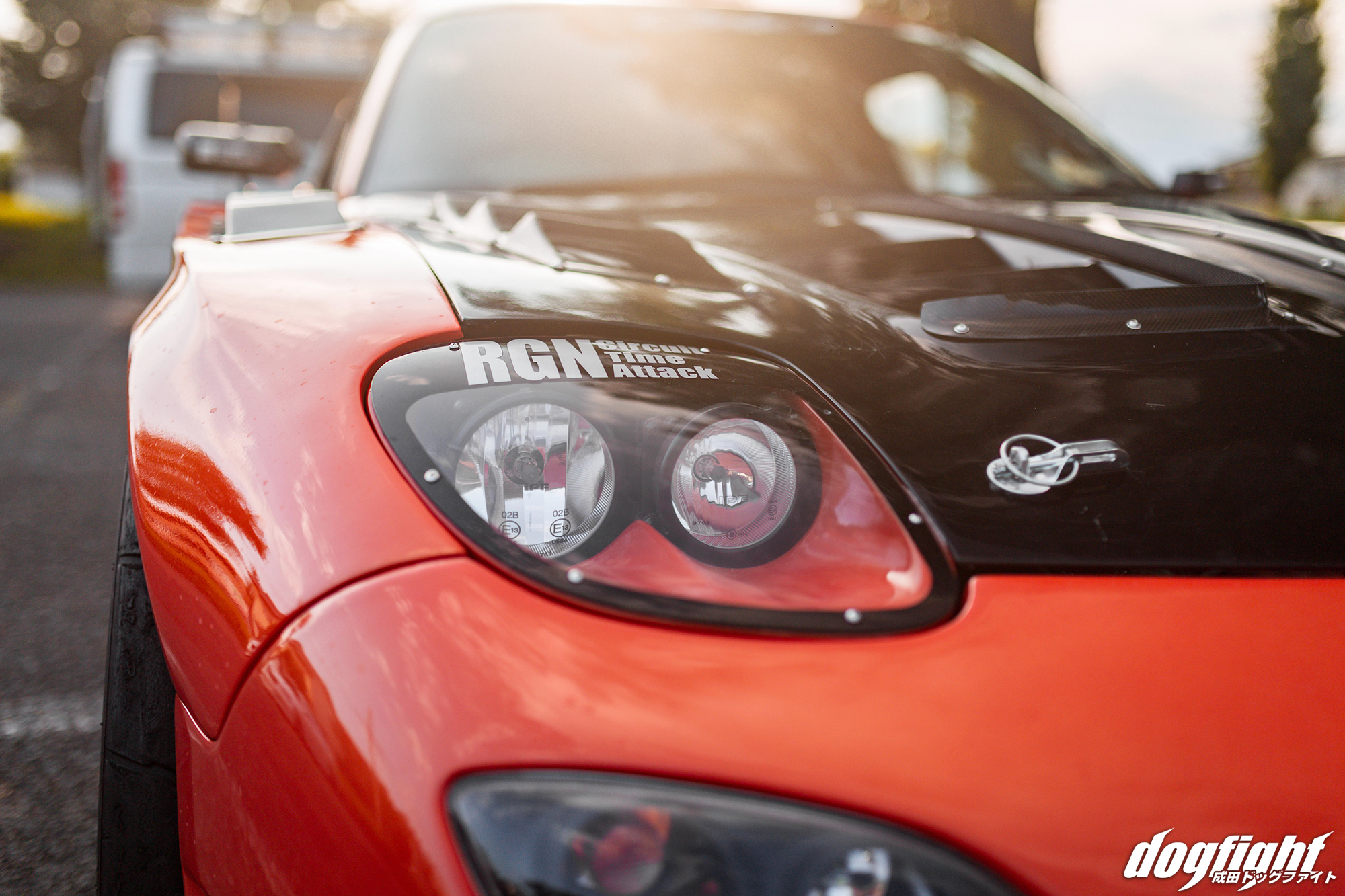 RE Amemiya Sleek Headlights take the place of the OE pop-up pieces reducing weight and modernizing the look of the front end. 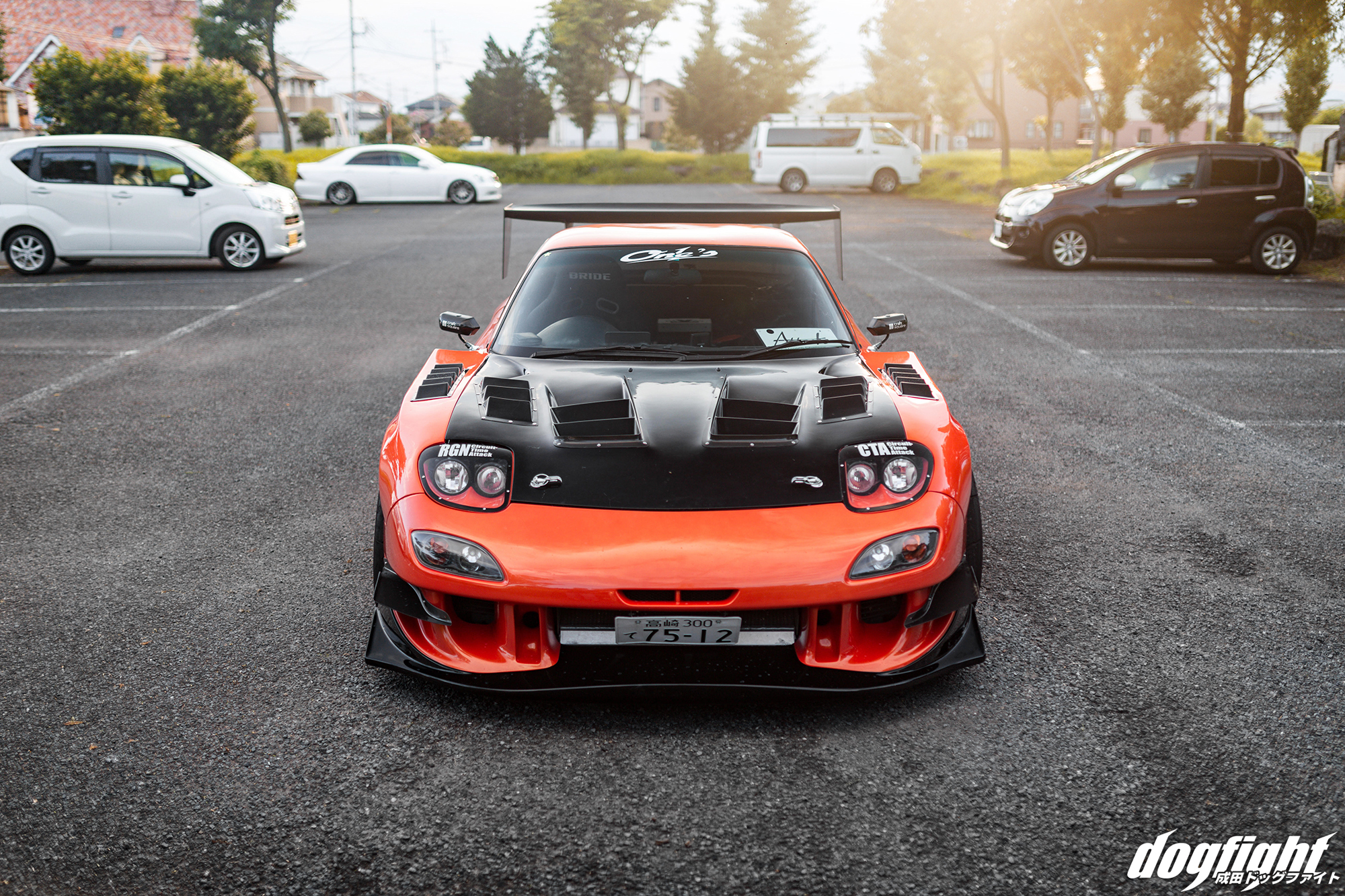 An aggressive look for a street build, but one that is fitting to the owner. 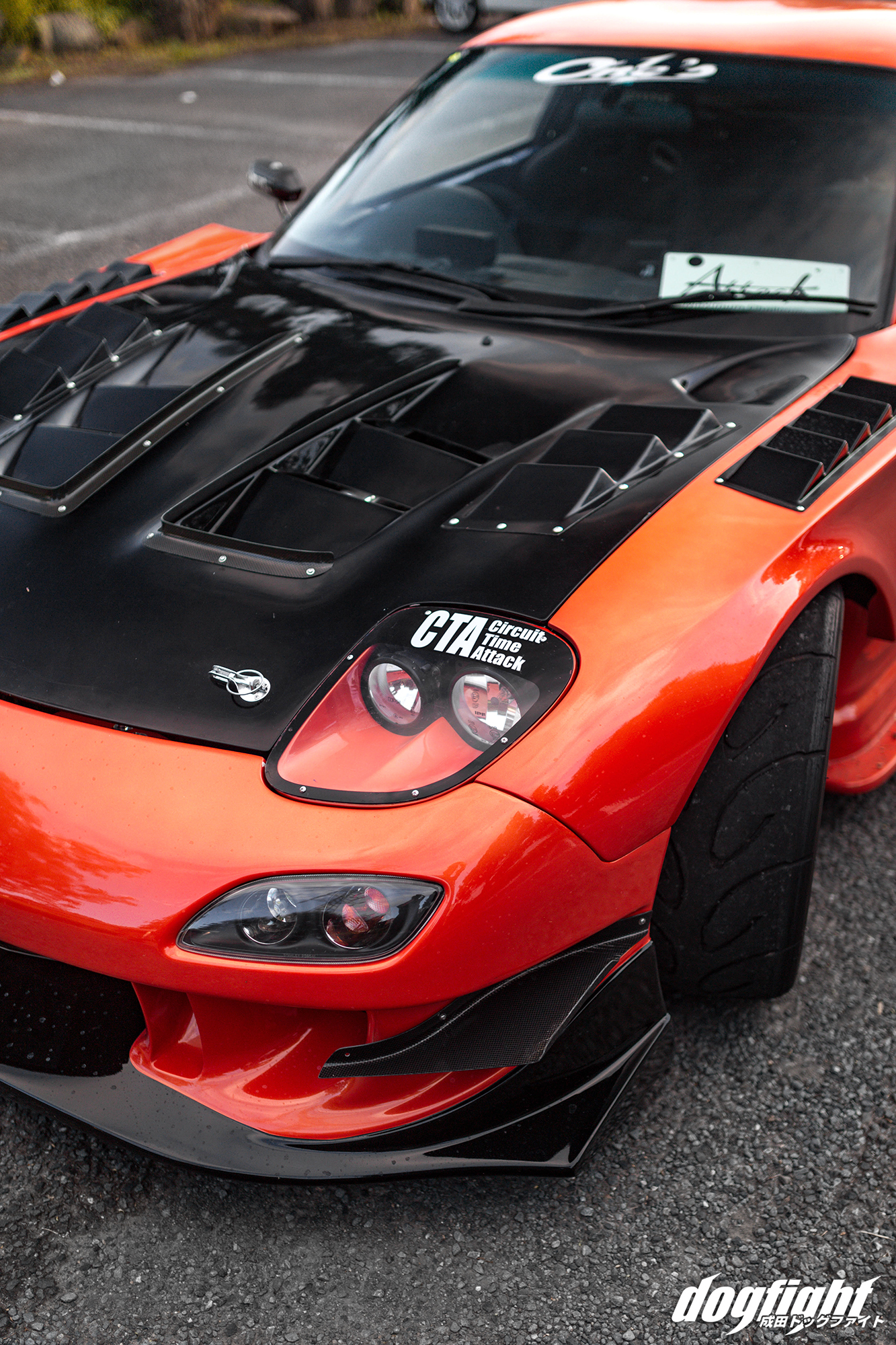 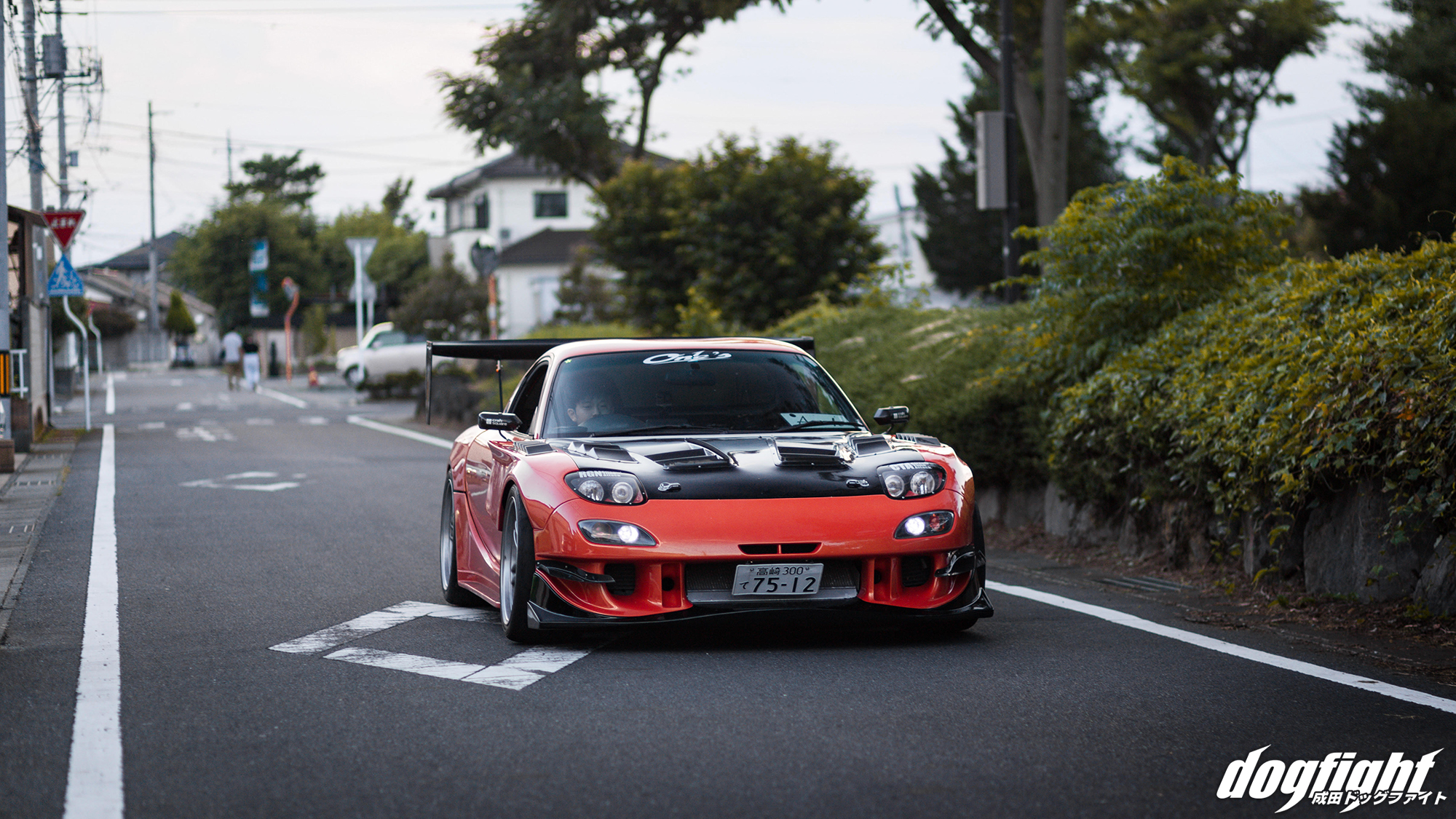 The suburbs of Takasaki City provide a perfect backdrop for the bright orange car. 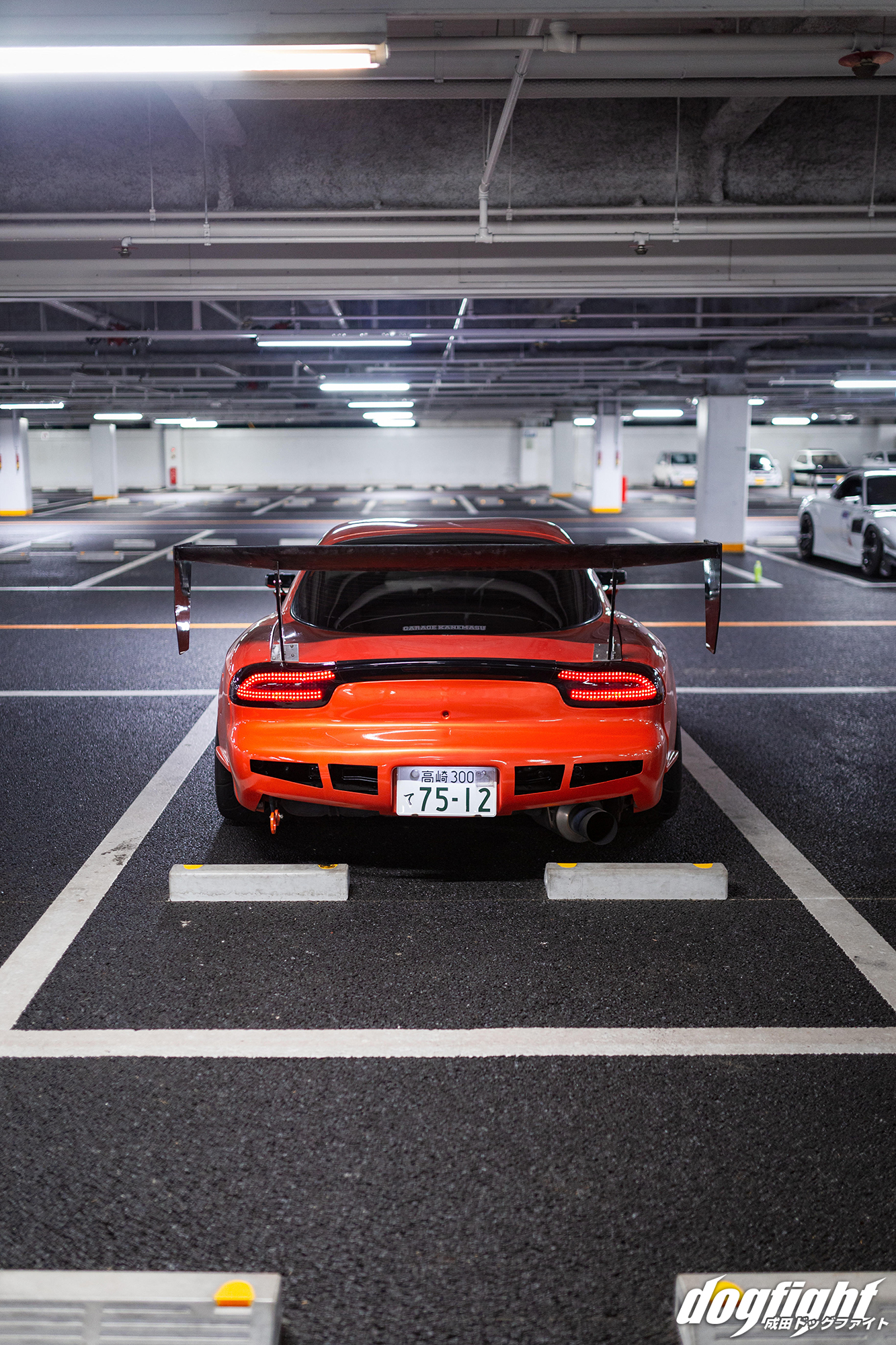 Car Shop Glow LED taillights are almost a necessity at this point for all FD’s involved in Attack.  Associations aside, they are still among the best looking option in the market.

The rear bumper has the iconic cuts that are now a signature part of any One’s build. 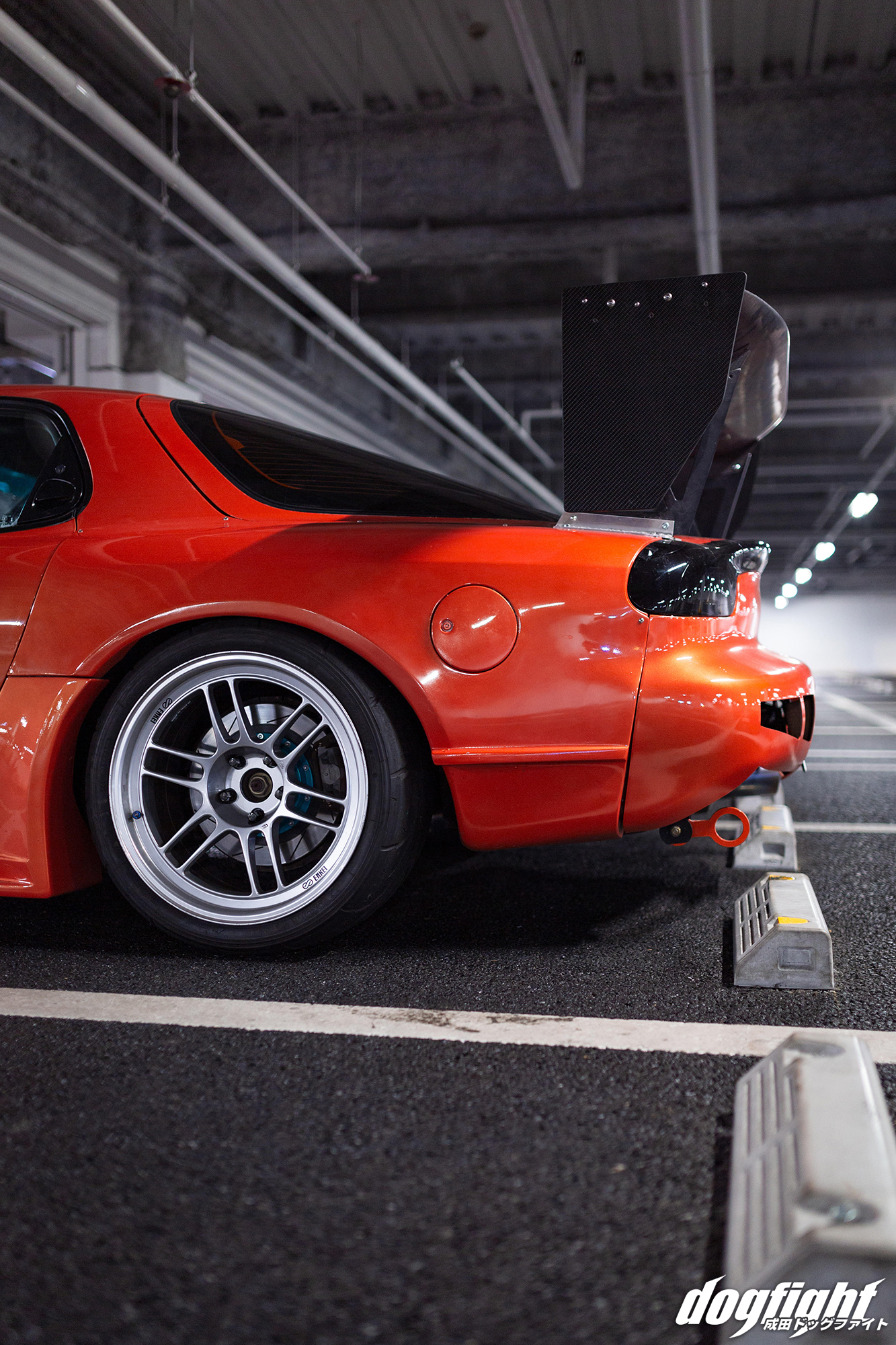 An Esprit 052 1800 mm GT wing sits atop the trunk on custom wing stands made by his good friend, and fellow FD owner, Oouchi-san.  Car Shop Glow wing stay panels transform the CNC cut stays into having a more solid stand look without the added weight of material. 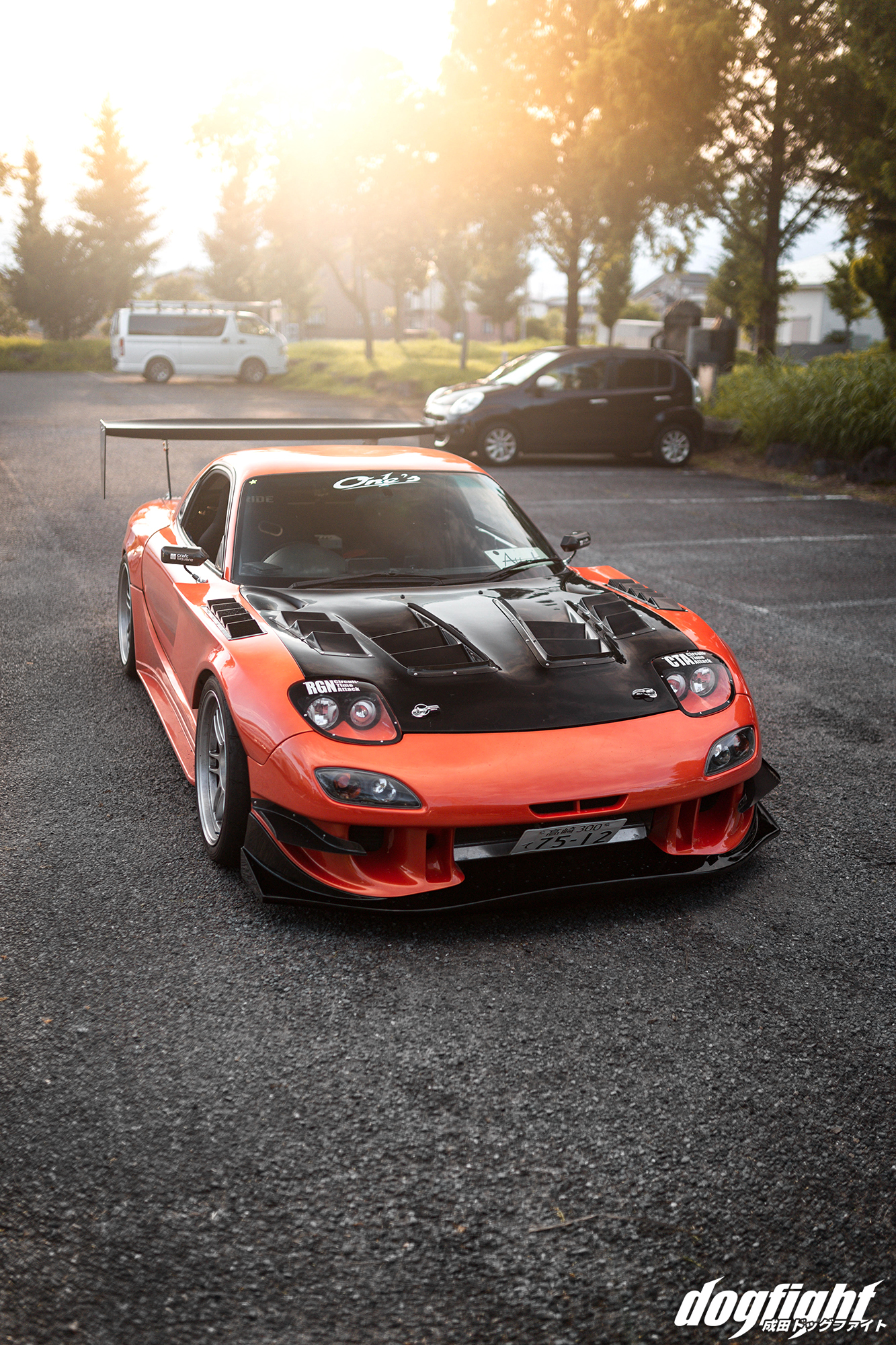 I’m looking forward to seeing the continued development of such a young build, and to see Sato take this car around TC2000 is going to be epic.  No doubts that Takahashi would be proud as well, seeing someone share such a similar passion, following so closely in his own footsteps.