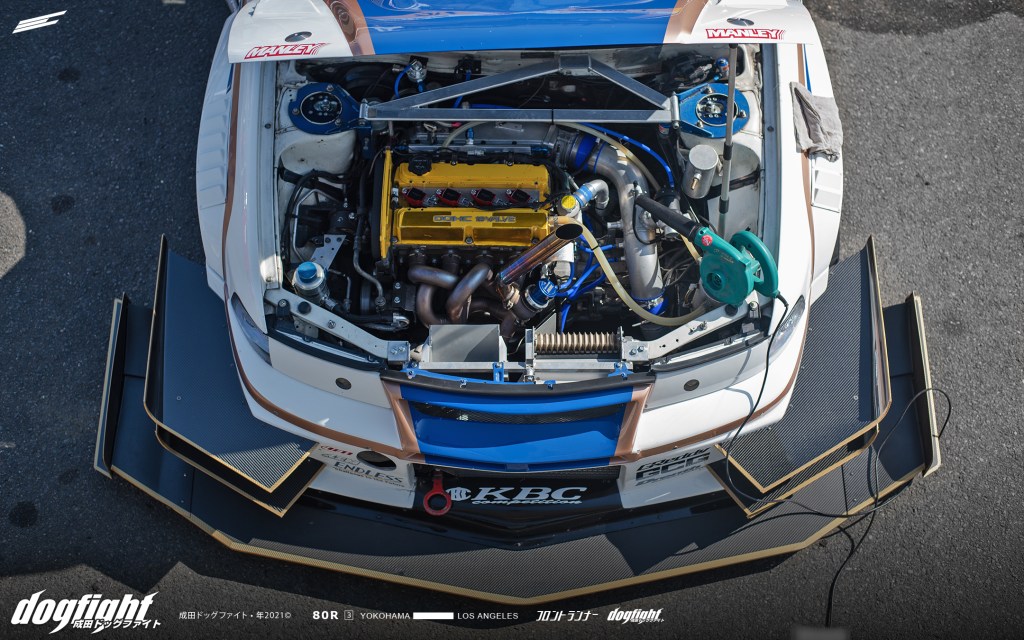 The ‘Kagayaki’ (かがやき) is a high speed train service that operates between Tokyo and Kanazawa on the Hokuriku Shinkansen line.  It is jointly owned by JR East and JR West, and is the fastest train on this particular line reaching speeds of up to 260kph.  It also served as the inspiration for the livery and overall appearance of Oya-Ji’s widebody Evolution 5.

The tasteful blue and gold accents that run along the side of the Mitsubishi, and cascade down from the tops of the hood, roof, and trunk of the car perfectly emulate that of the trains.  Japan Rail chose these colors for the Kagayaki shinkansen, (Kagayaki meaning ‘radiance’ or ‘shine’ in Japanese), because they best represent the colors of the pure luminosity of speed; and what better to represent pure speed than a race car that laps Tsukuba’s TC2000 in 57.143 seconds?  We find it quite appropriate.  And while the bright white may be the first thing to catch your eye, the simple, yet tasteful colors do little to hide the aggressive array of exterior aero parts.  A stark contrast from the smooth lines of the shinkansen they’re derived from.

Oya-ji, the 53 year old company president, who like many people began his love affair with cars since childhood, began building this car back in 2015.  Over those 6 years, with the guidance of tuning shop and close friend ‘KBC’, the car has slowly evolved into a one of a kind, all out time attack car.  From the start, Oya defined what he wanted out of the build, laying out power levels, and time goals at various tracks (his favorite being Sportsland Sugo), with the exterior and aerodynamic upgrades evolving as the car progresses.

It’s an important factor that often gets overlooked when building cars at the grassroots level.  Without an idea of what the end looks like, it’s easy to lose track of the path.  From the start, this Evo was slated to run well under the 1 minute mark at Tsukuba’s TC2000 circuit. 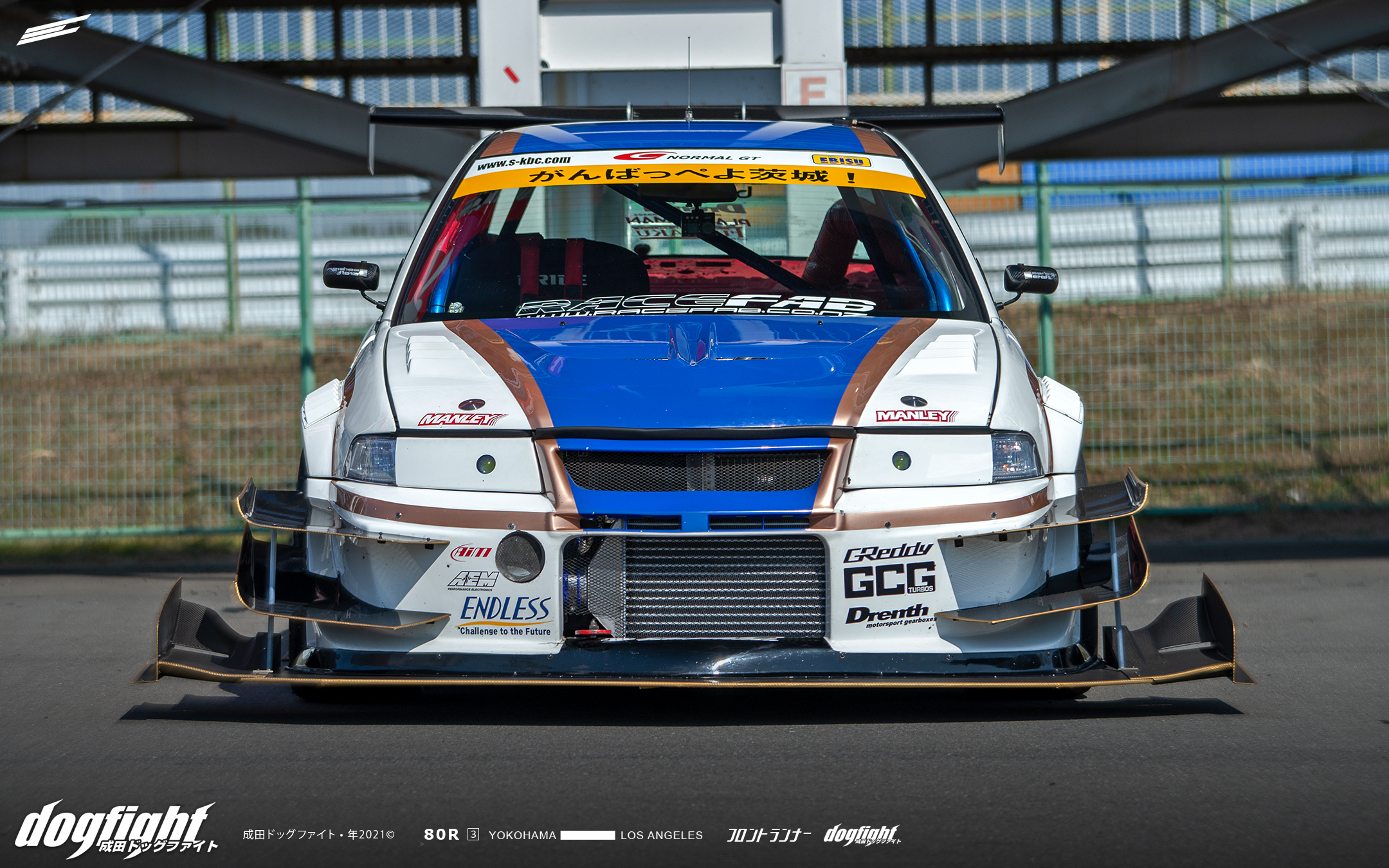 A handful of companies were employed to transform the appearance of the Evo.  The front end consists of an aero package by Benetec dry carbon front lip with integrated splitter and end plates, as well as a catalog of Voltex canards that are trimmed around the wide Varis fenders. 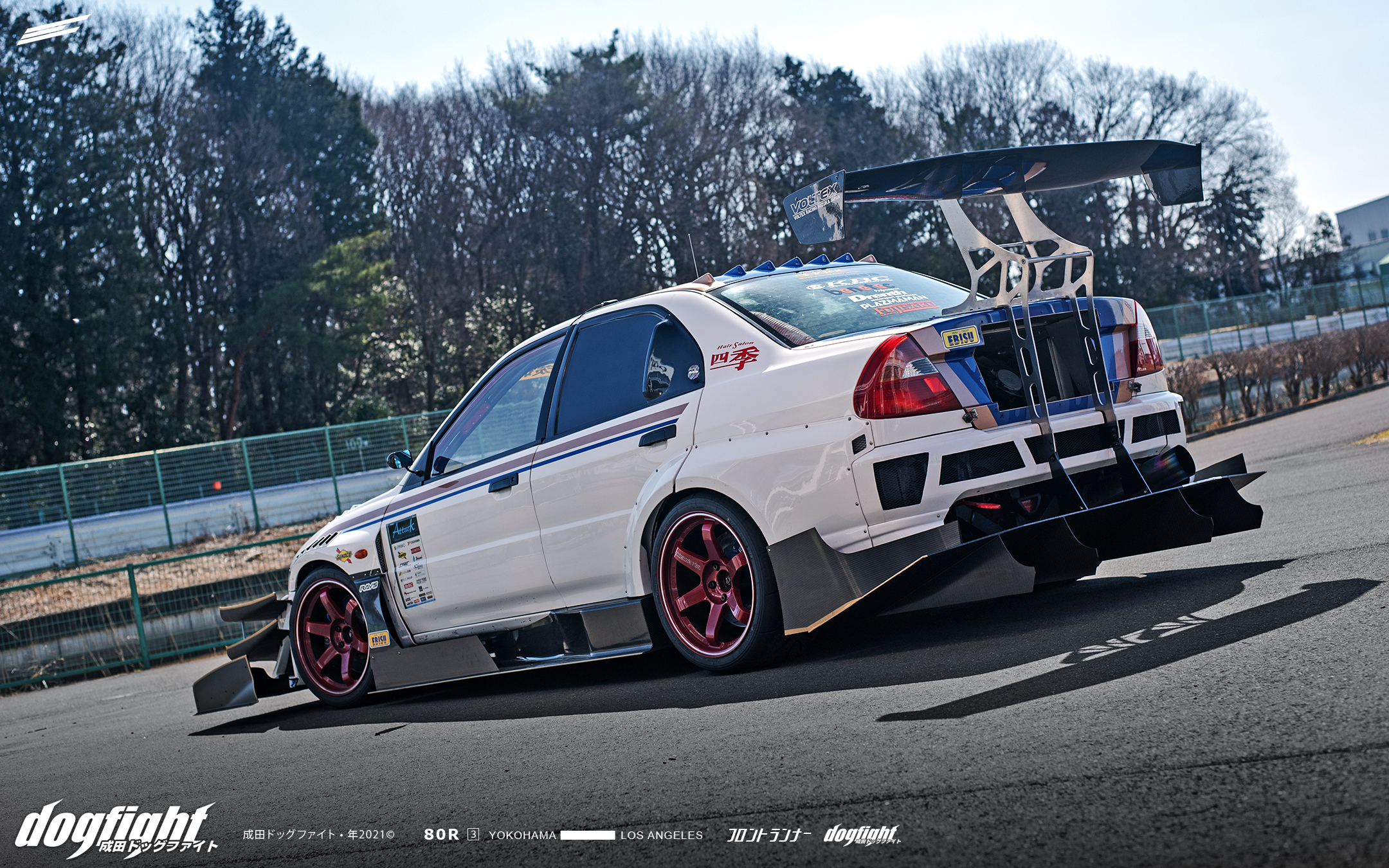 As air flows over the front aero, it motions through the vented Varis fenders and along the custom, ducted Benetec dry carbon side skirts and continues on to the rear of the car which has been given an equally effective upgrade.

An aggressively large dry carbon rear diffuser, also made by Benetec, combined with a chassis mounted Voltex Type 7 GT wing give the rear the added downforce it needs to keep the Evo planted through the turns. 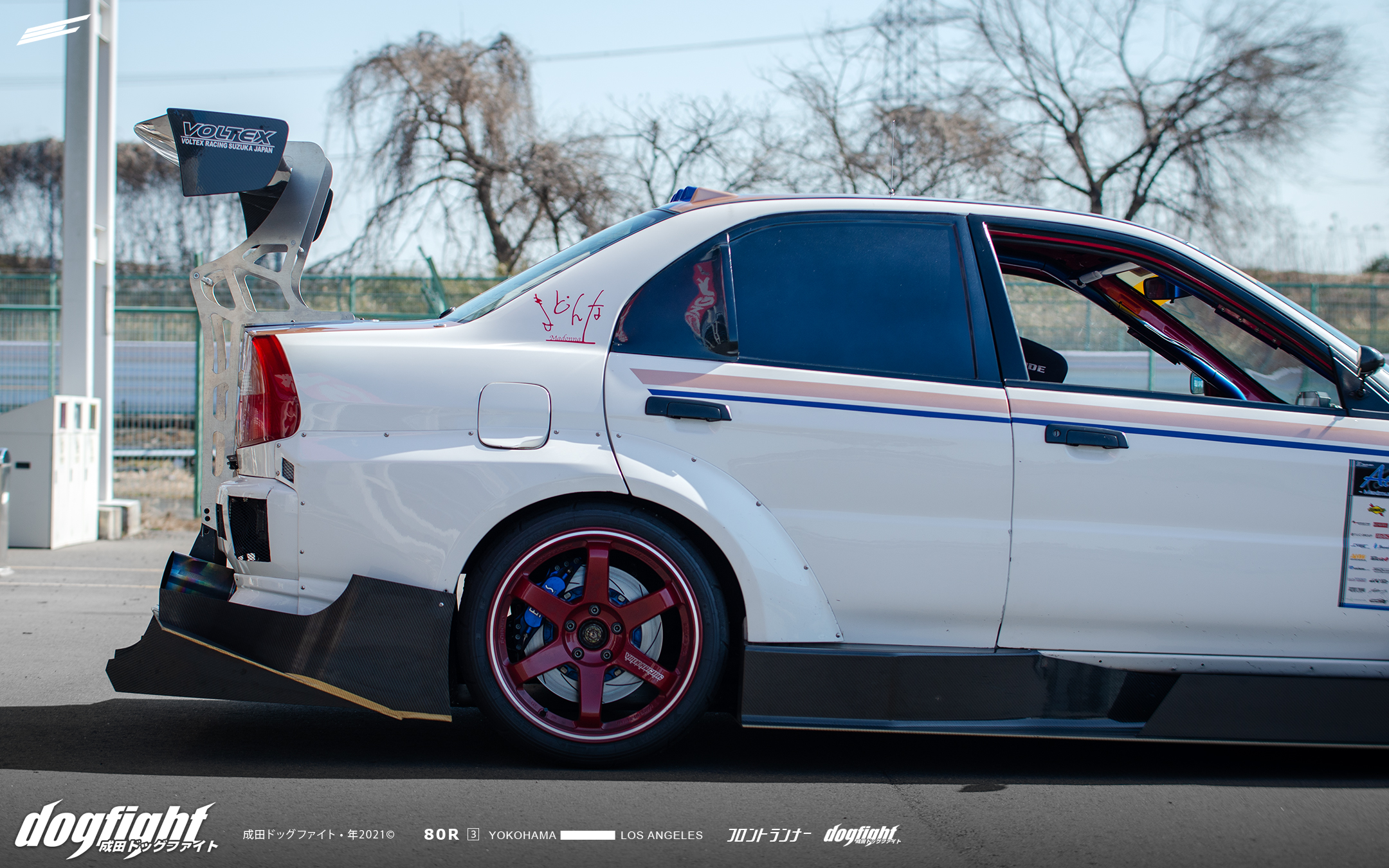 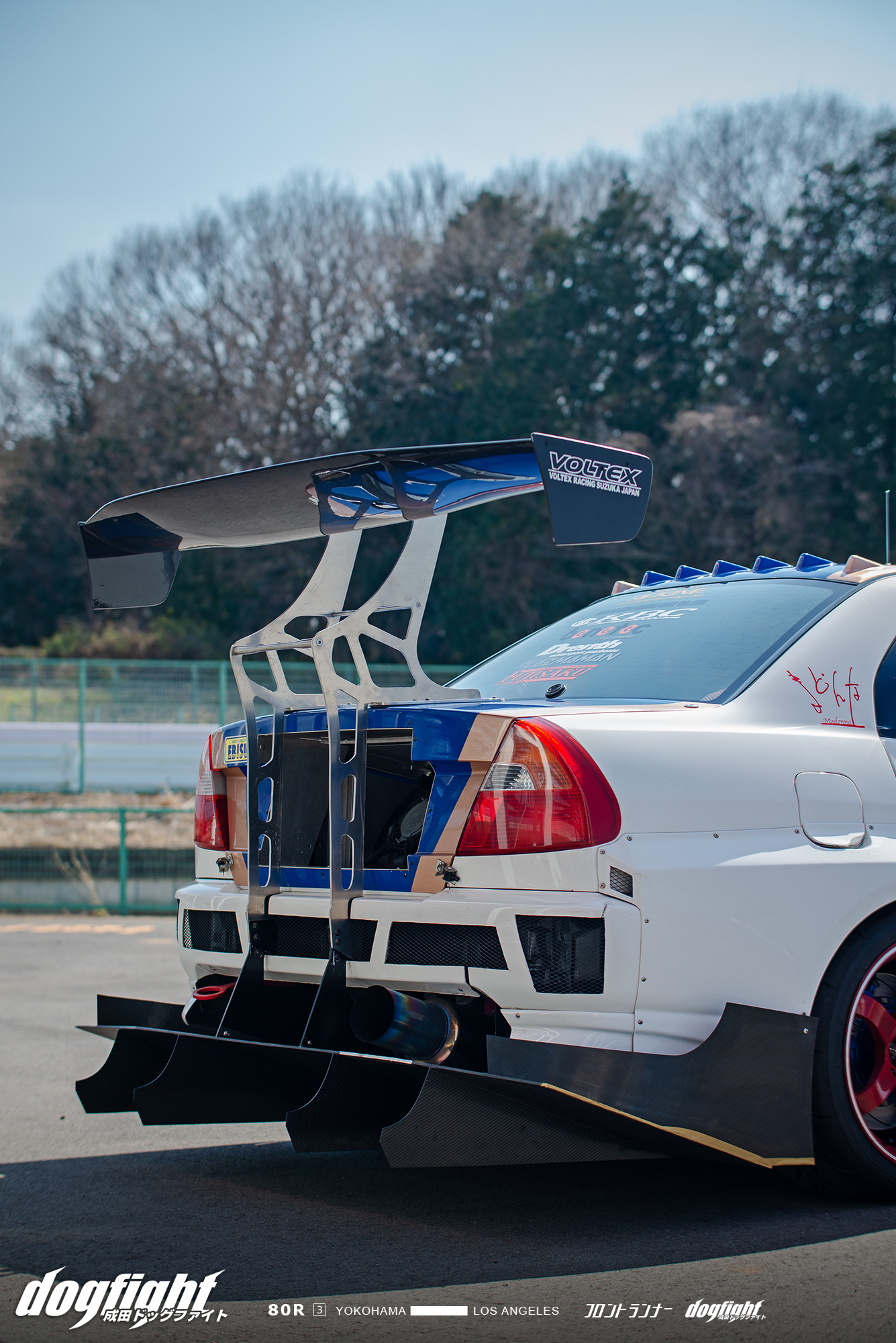 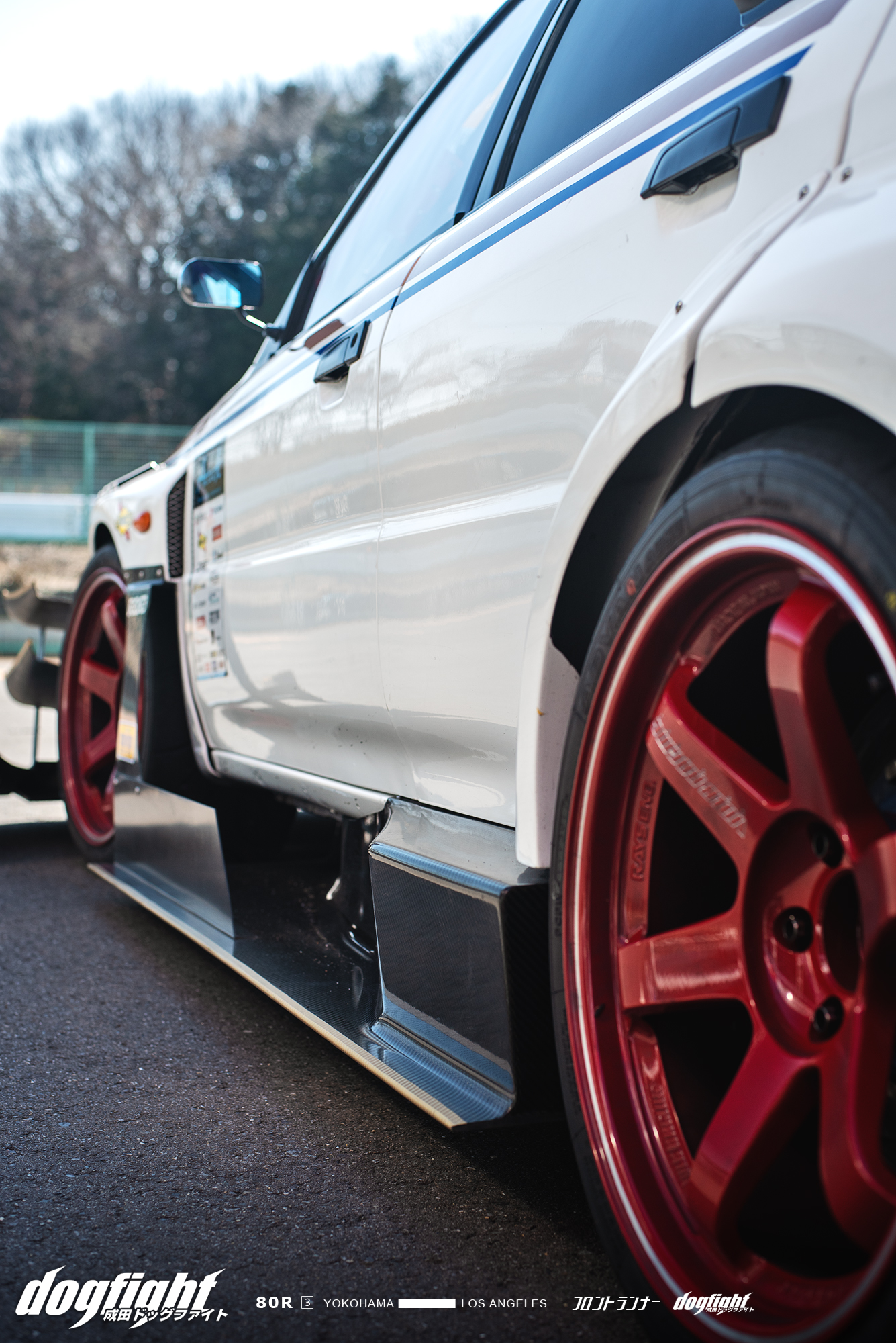 The subtle hint of gold from the Kagayaki theme runs along the edges of all the carbon pieces. 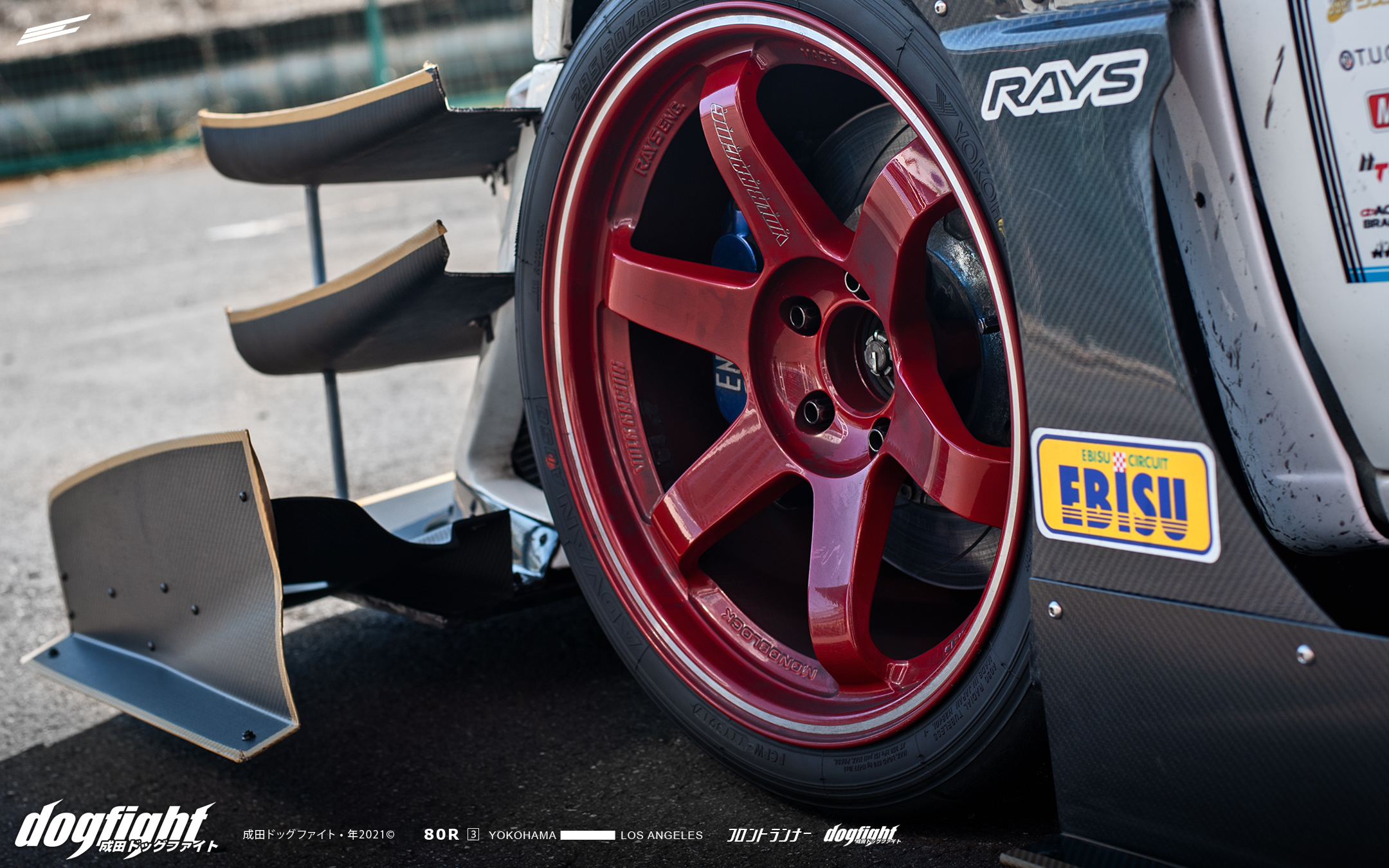 Benetec splitter ends and the stacked Voltex canards are a hard to beat combination for both looks and front end downforce. 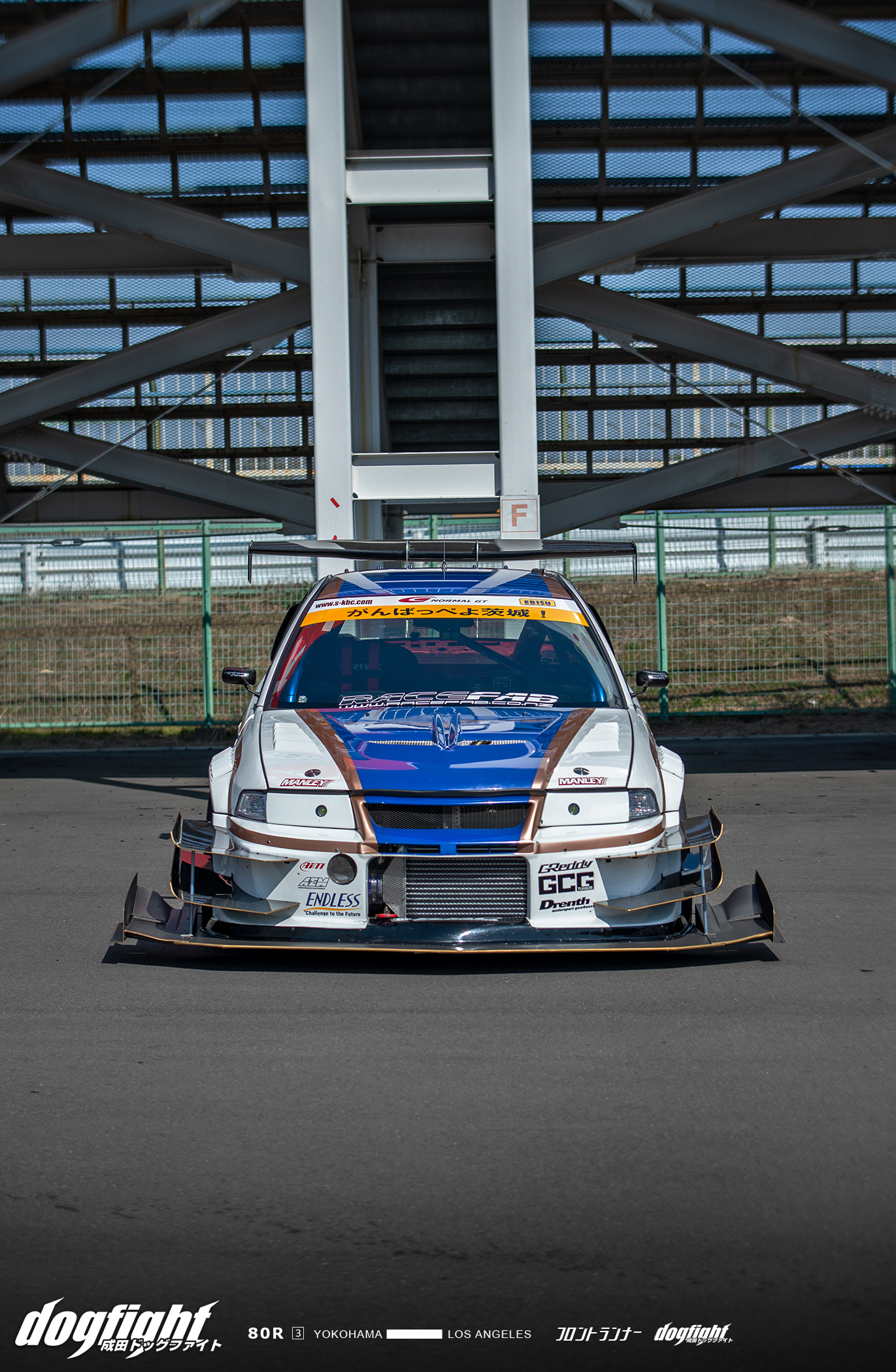 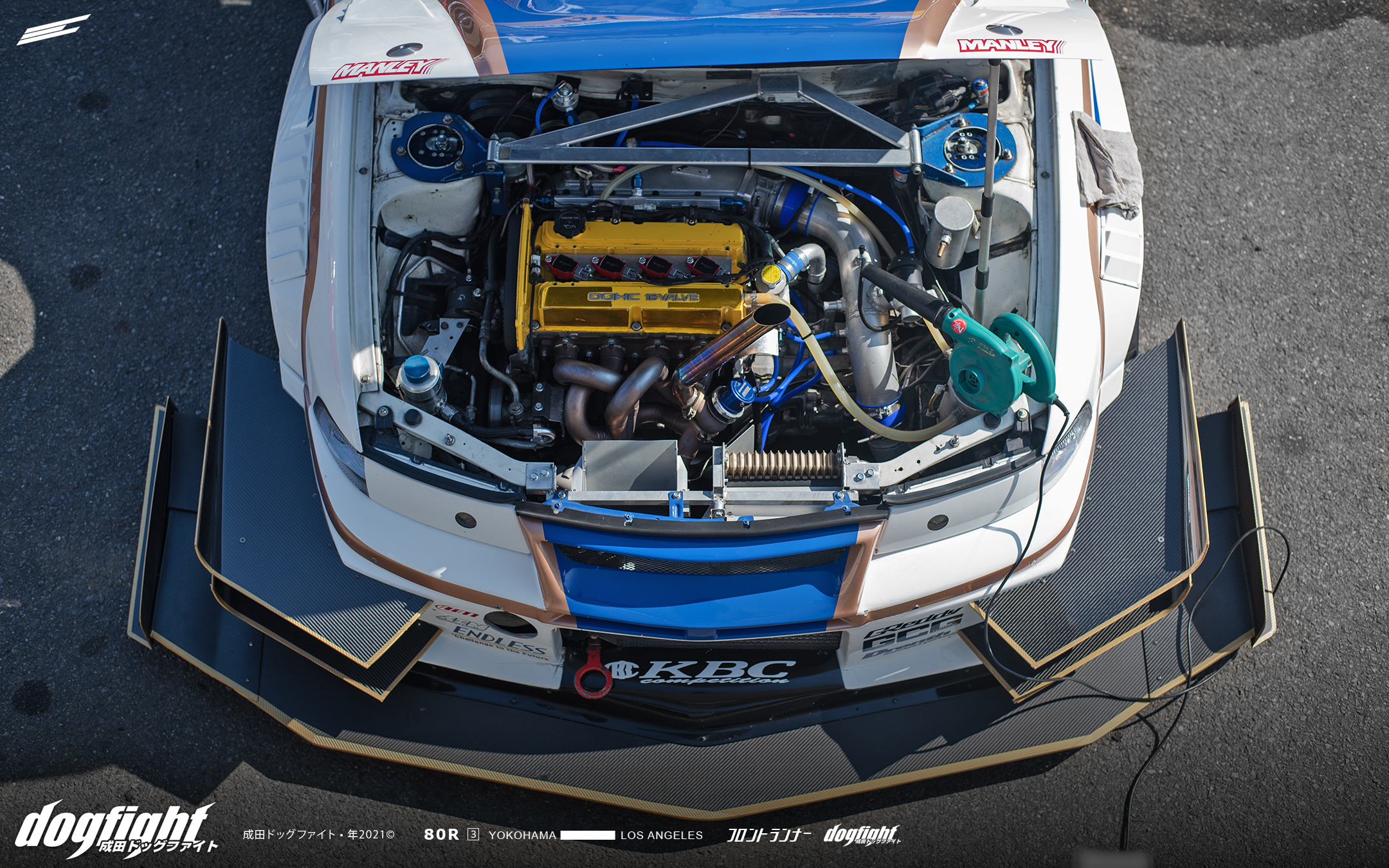 Equipped to match it’s combative exterior, the cars powerplant backs up the look with power to spare; no doubt, this is a dog that has both a bark and a bite.  The KBC built 4G63 has been completely disassembled and pieced back together again with top quality parts to ensure it can handle all the boost the GCG GTX4088R can throw at it.  KBC, after performing the head work, used a catalog of Tomei parts to replace the OE counterparts.  Tomei Procam 280 camshafts, Tomei cam gears, Tomei retainers, and HKS valve springs are all put together with the Tomei Solid Pivot set.

Diamond Engineering has transformed the block into a bomb shelter with a full array of Manley parts; pistons, rings, connecting rods, and a one off crankshaft were all supplied by the US based, high power experts at Manley Performance. The head and block were then mated together with a custom KBC headgasket. 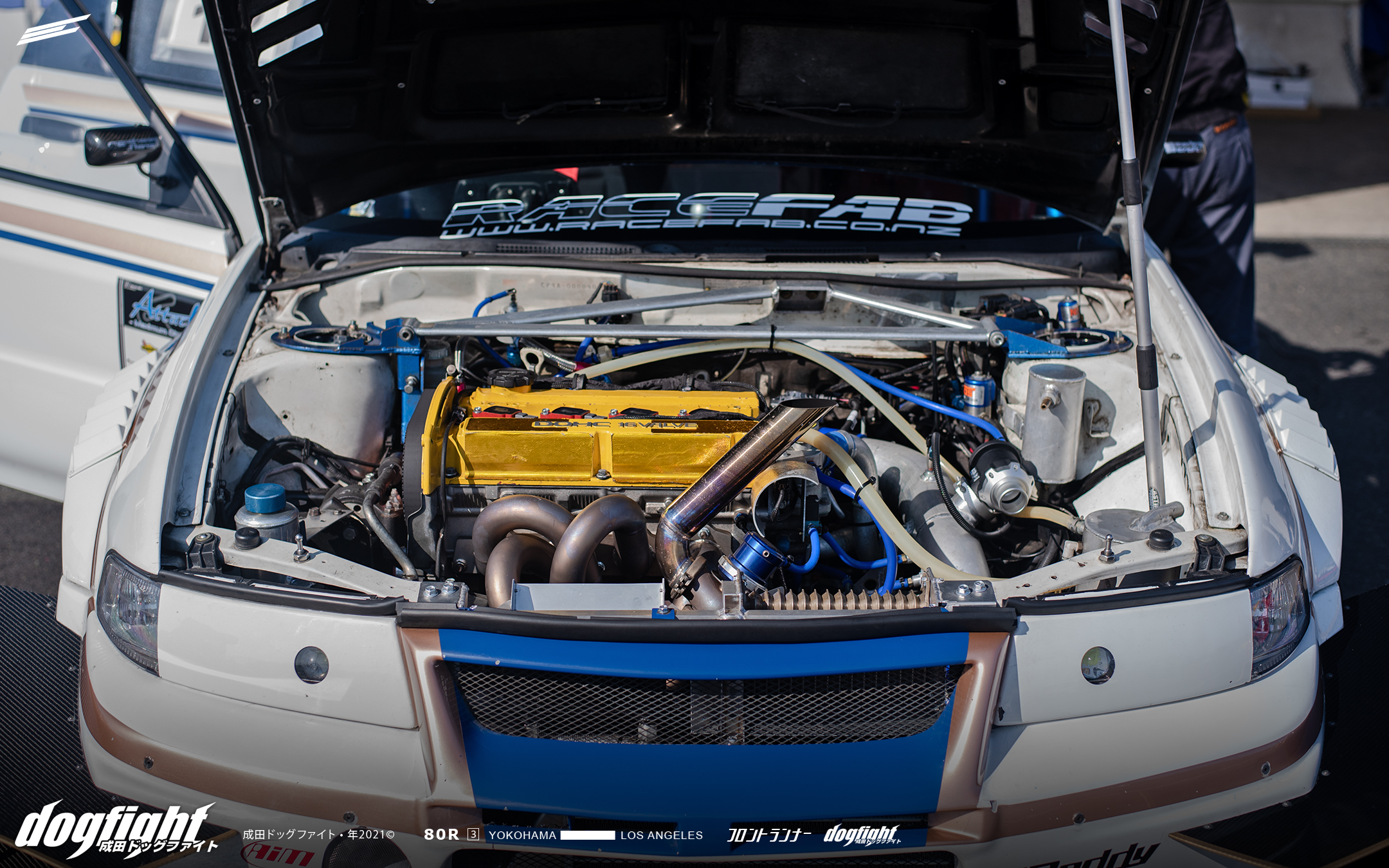 The GCG turbine is matched with a GCG T4 mount manifold, HKS SQV blow off valve, and Turbosmart wastegate.  KBC made a one off intercooler to help keep temps in check.  Dual AEM and Bosch fuel pumps supply fuel through the Plazmaman fuel rails and through the ASNU 2000cc and Injector Dynamics 1050cc injectors.  The twin injector specification has become common on many high power 4G builds, and while this setup is specific to Plazmaman’s intake manifold that allows the use of 8 injectors through 2 CNC’d rails, there are a few other ways of utilizing a secondary rail as well.

KBC used a LINK G4 Fury ECU to tune the engine on E85; which may seem common stateside, but is somewhat rare for a Japan car.  Combined with a healthy shot of nitrous, the engine peaks at close to 800 horsepower at 7,500 RPM and 564 foot pounds of torque. 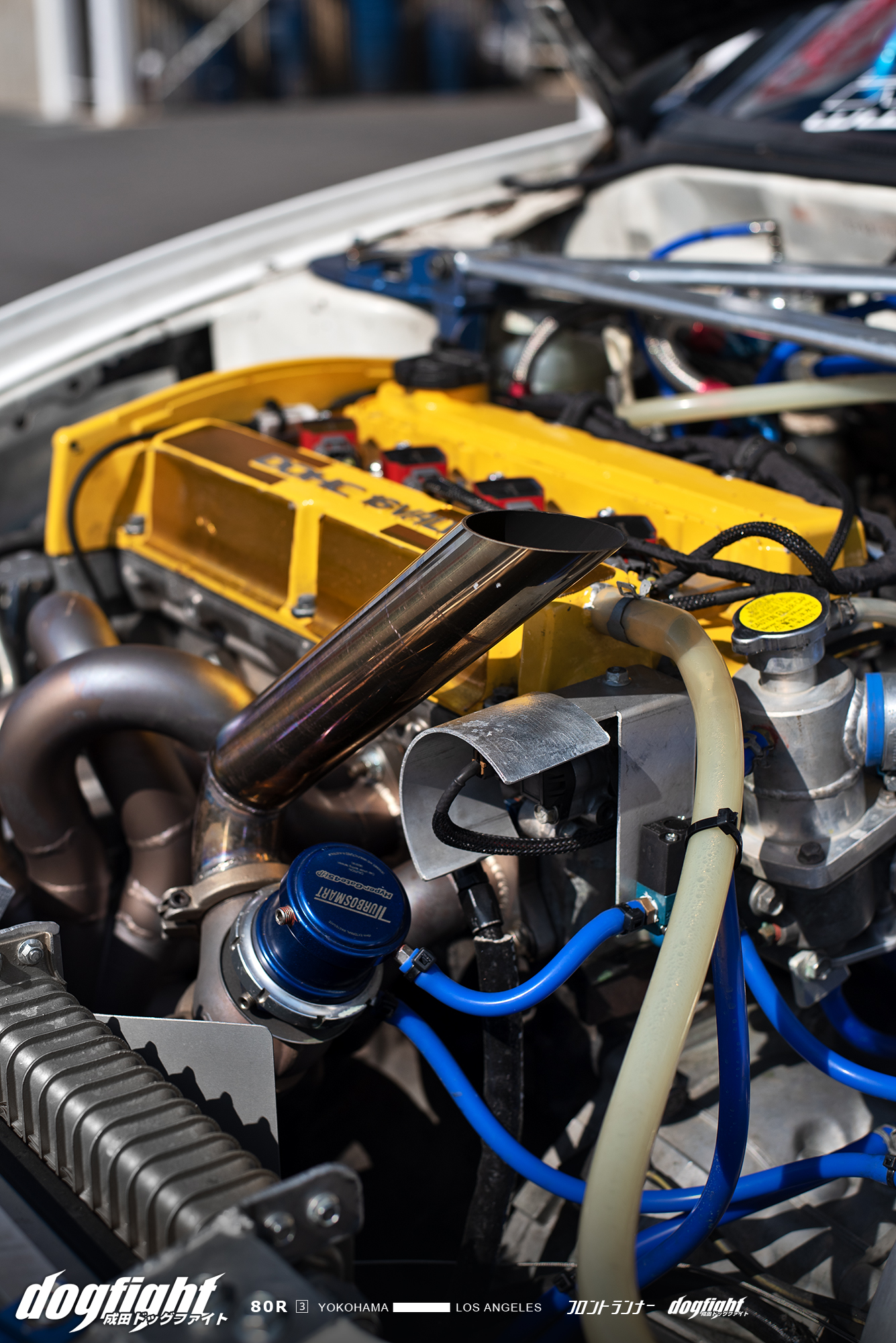 Despite the thought that has gone into the engine build, Oya hasn’t had the best of luck lately, experiencing back to back failures over the past few seasons.  That has yet to defeat his resolve though, and this newest reiteration of the 4G is the strongest yet. 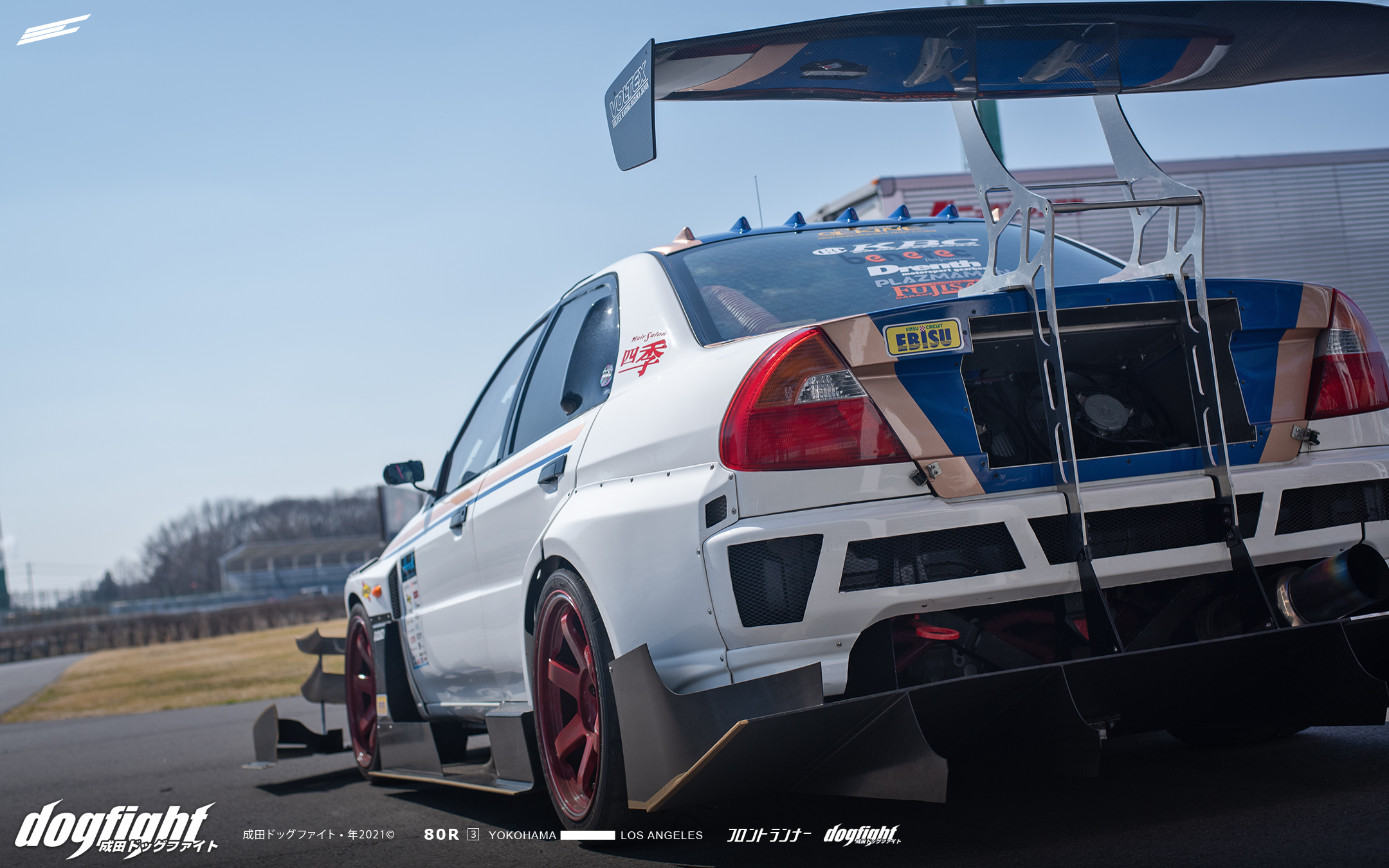 Translating all this power to the wheels is a Drenth 6 speed sequential gearbox, that as of last month, has been converted to a paddle shift setup.

A Cusco Type RS 1.5 way differential and an ORC clutch and flywheel assist in drivetrain duties. 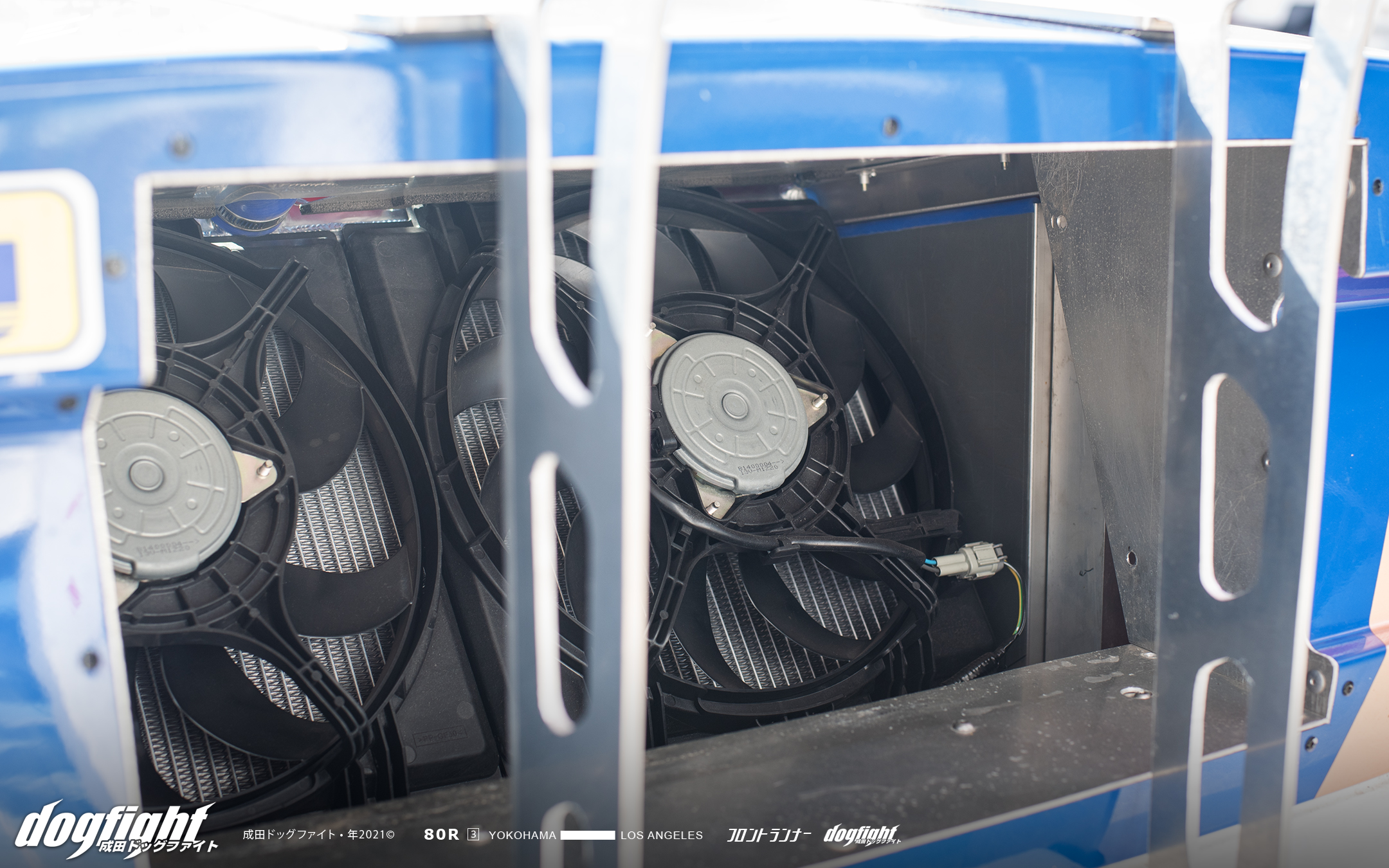 A rear radiator setup alleviates some of the crowding in the engine bay, as well as helps to keep heat soak out of the picture with the high temperatures the turbine sees.  A ducted, dual fan setup has worked well in this regard to keep engine temps in check. 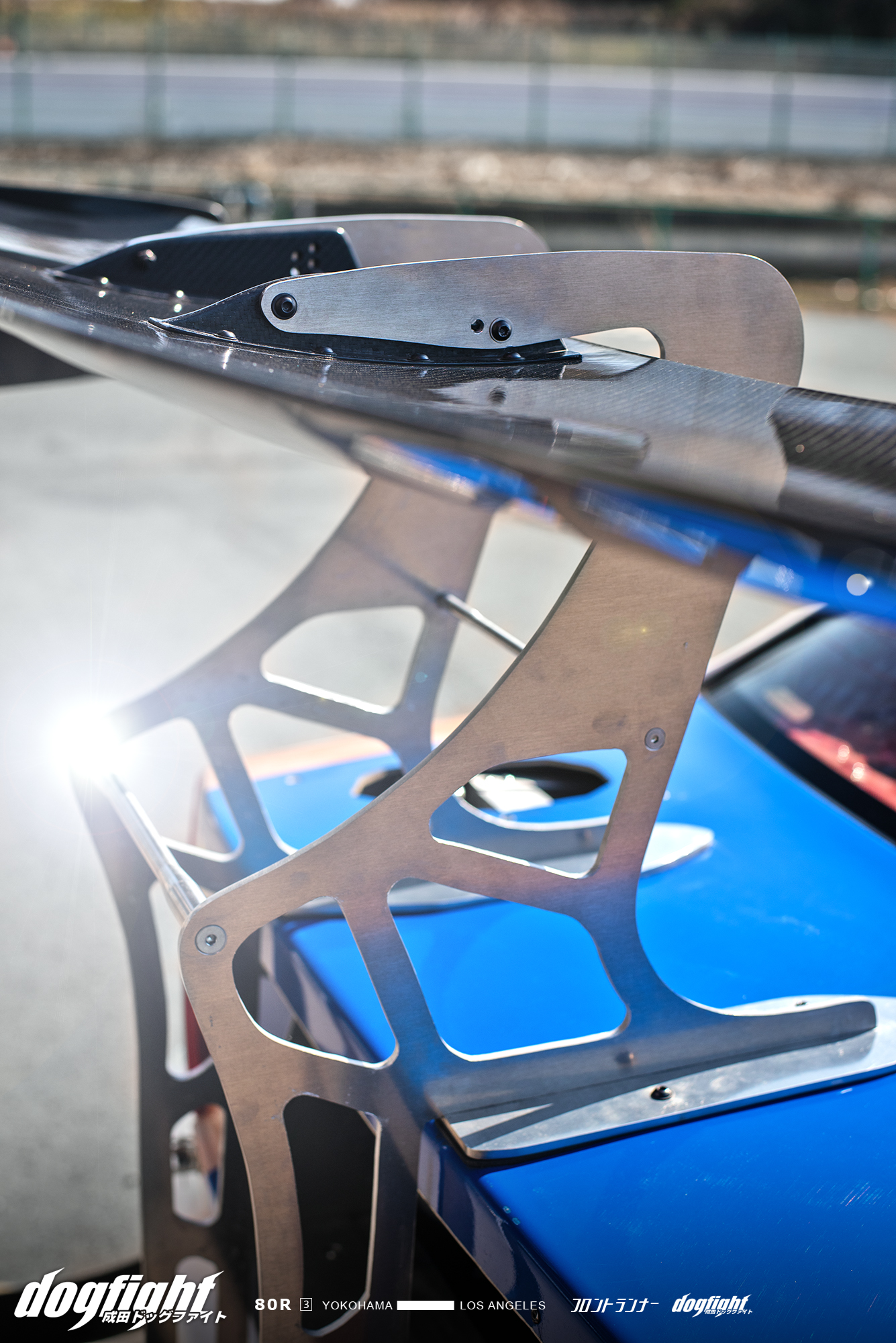 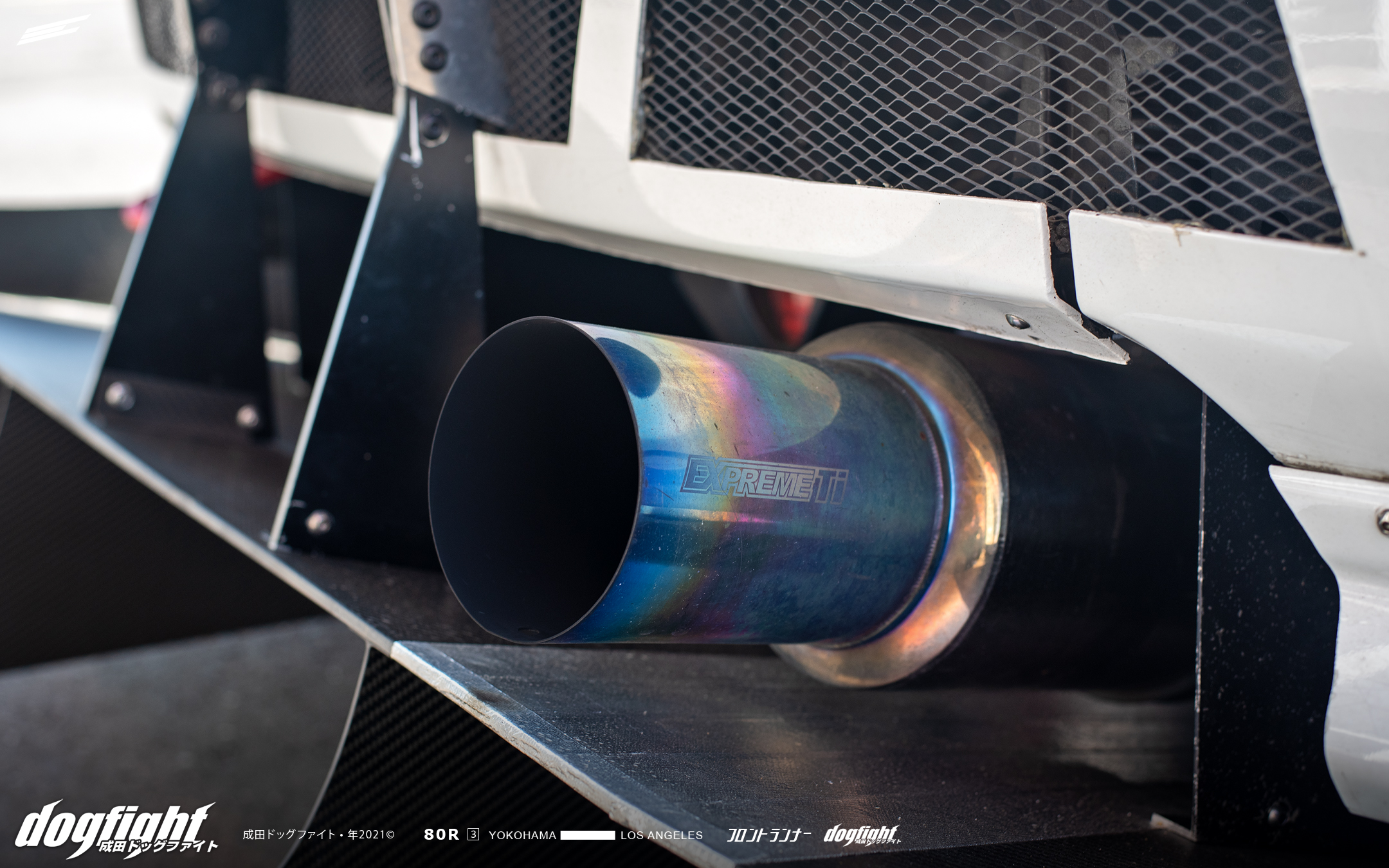 A Tomei Expreme Titanium exhaust vents the hot exhaust gases out the top of the diffuser. 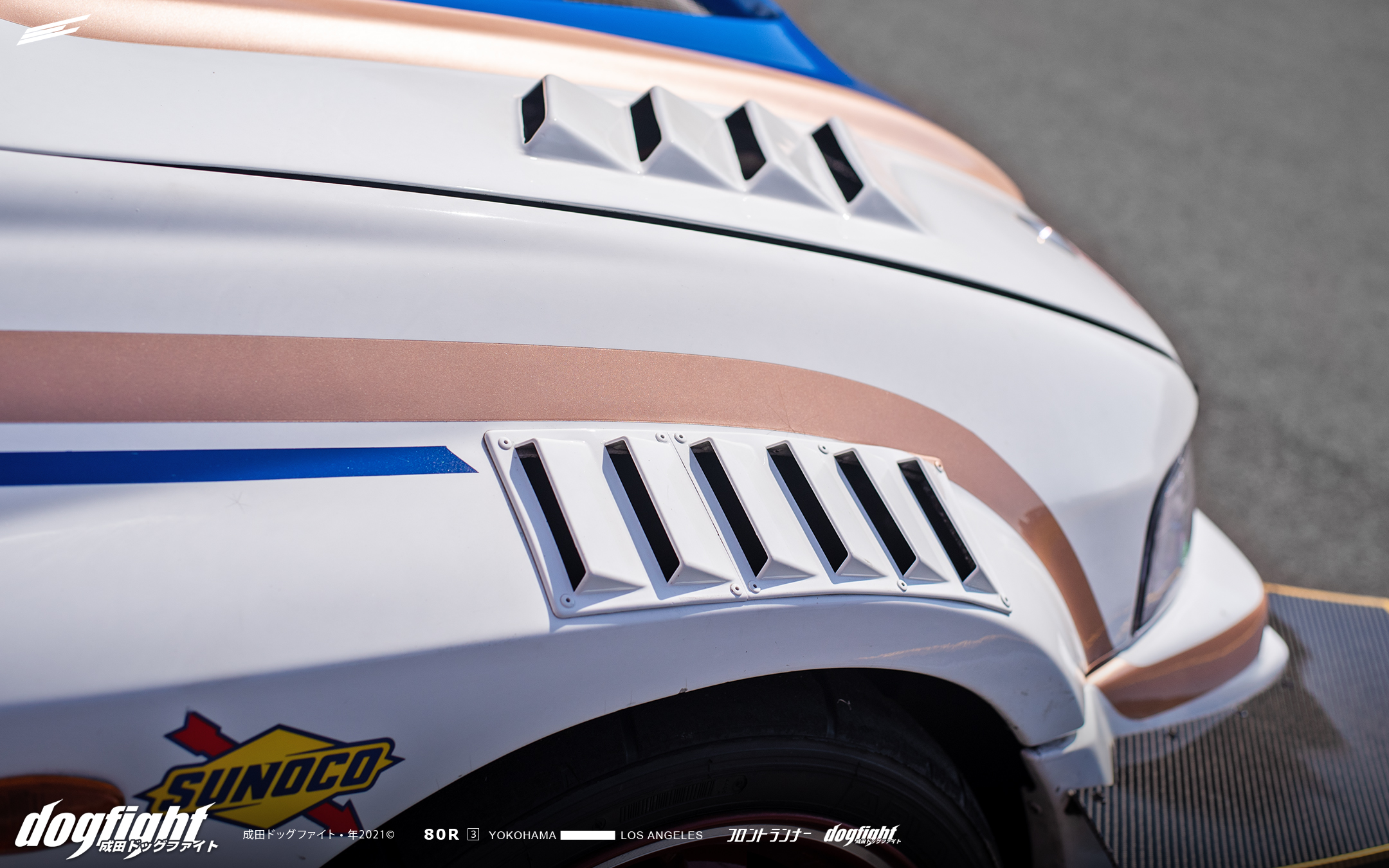 Another shot of the vented Benetec hood and Varis fenders. 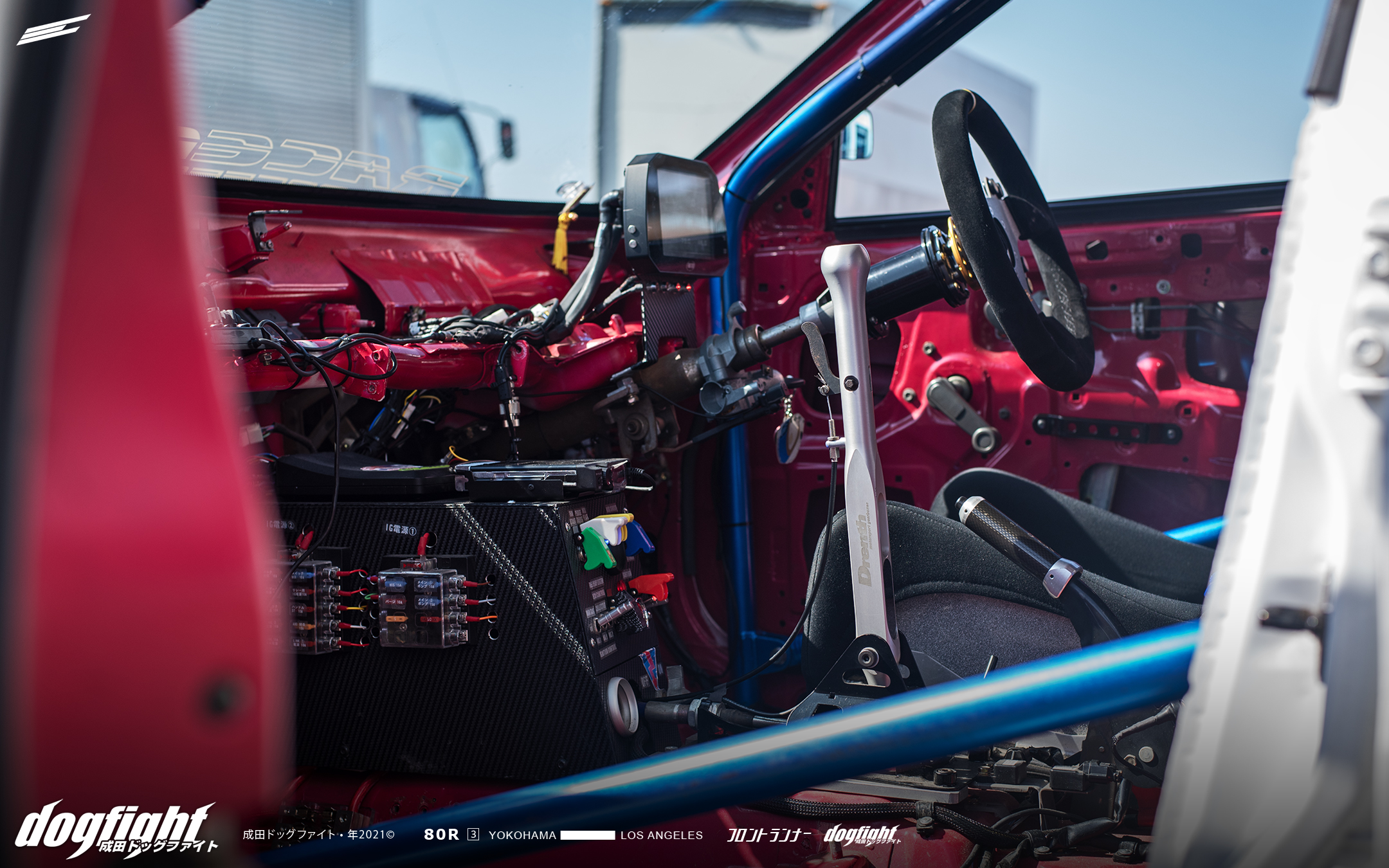 The bright pink interior is a direct contrast of the seriousness of the driving position of this car.  A Bride Maxis fixed back seat, sits directly in front of the OMP suede steering wheel, and AIM MXG dash display. 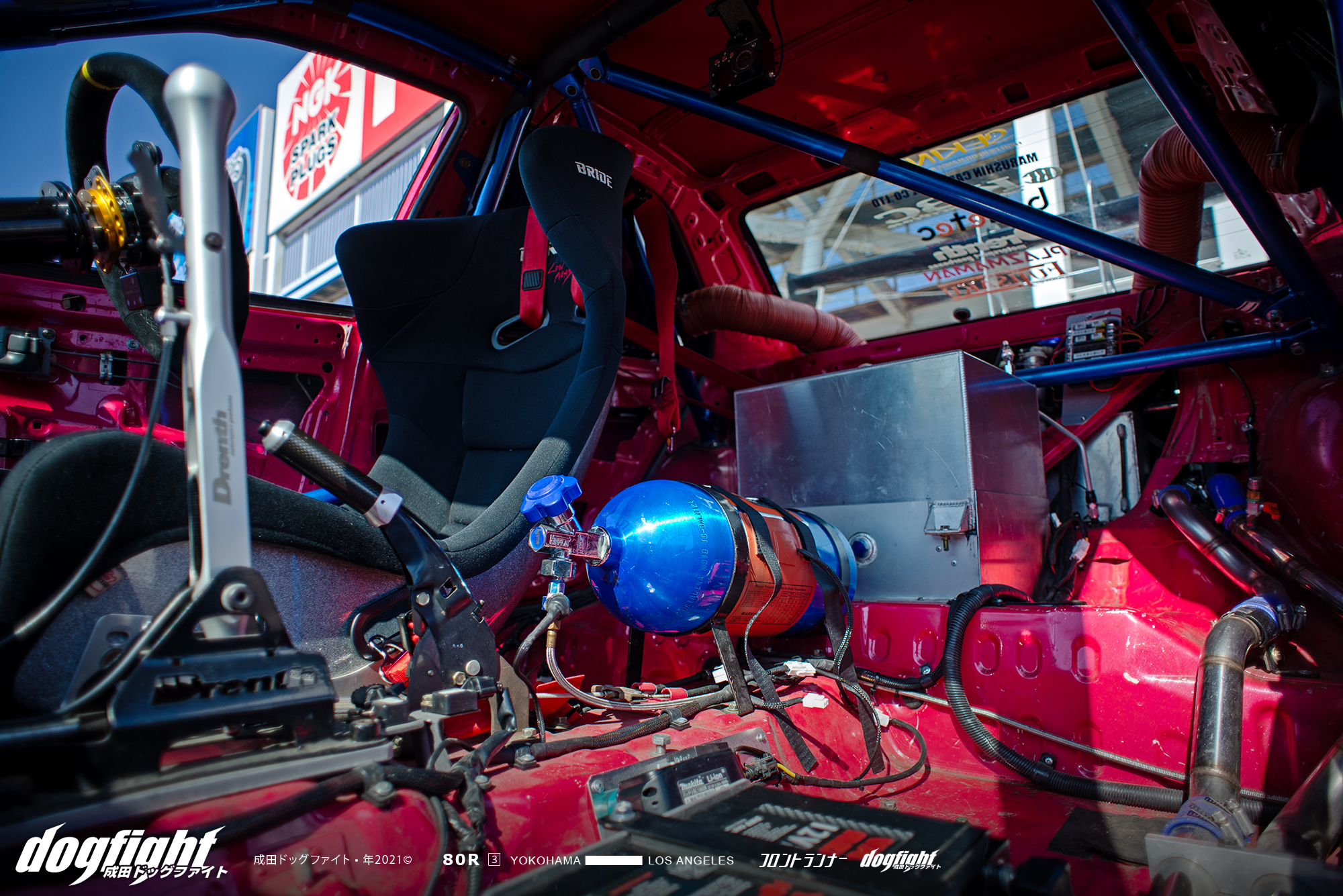 The completely stripped interior is safeguarded by a CUSCO roll cage; a lightweight alternative to a full weld in cage.  Ducted rear windows help channel air to the rear radiator setup.

The center console has been replaced by a nitrous tank, and just behind that is a custom fuel cell. 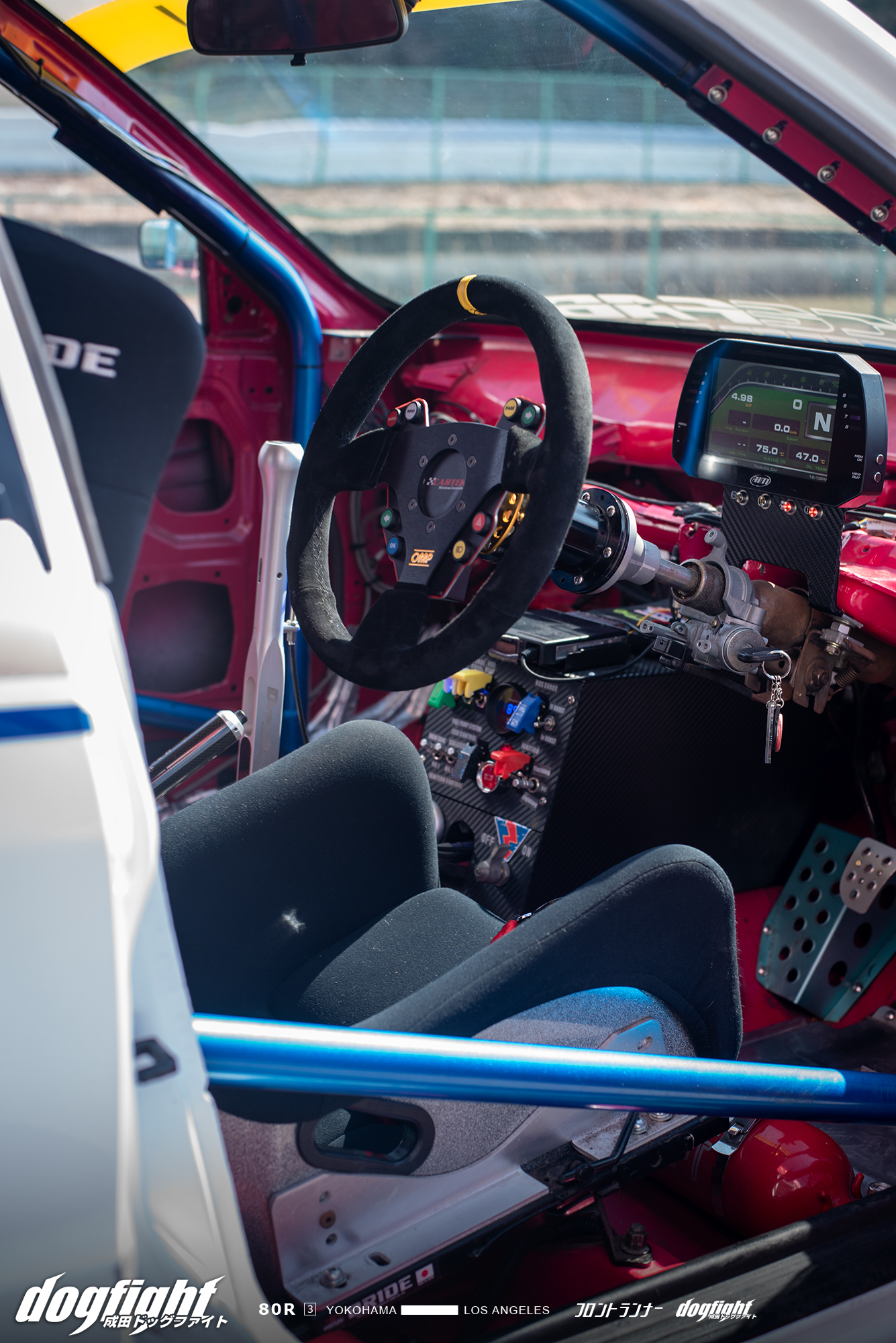 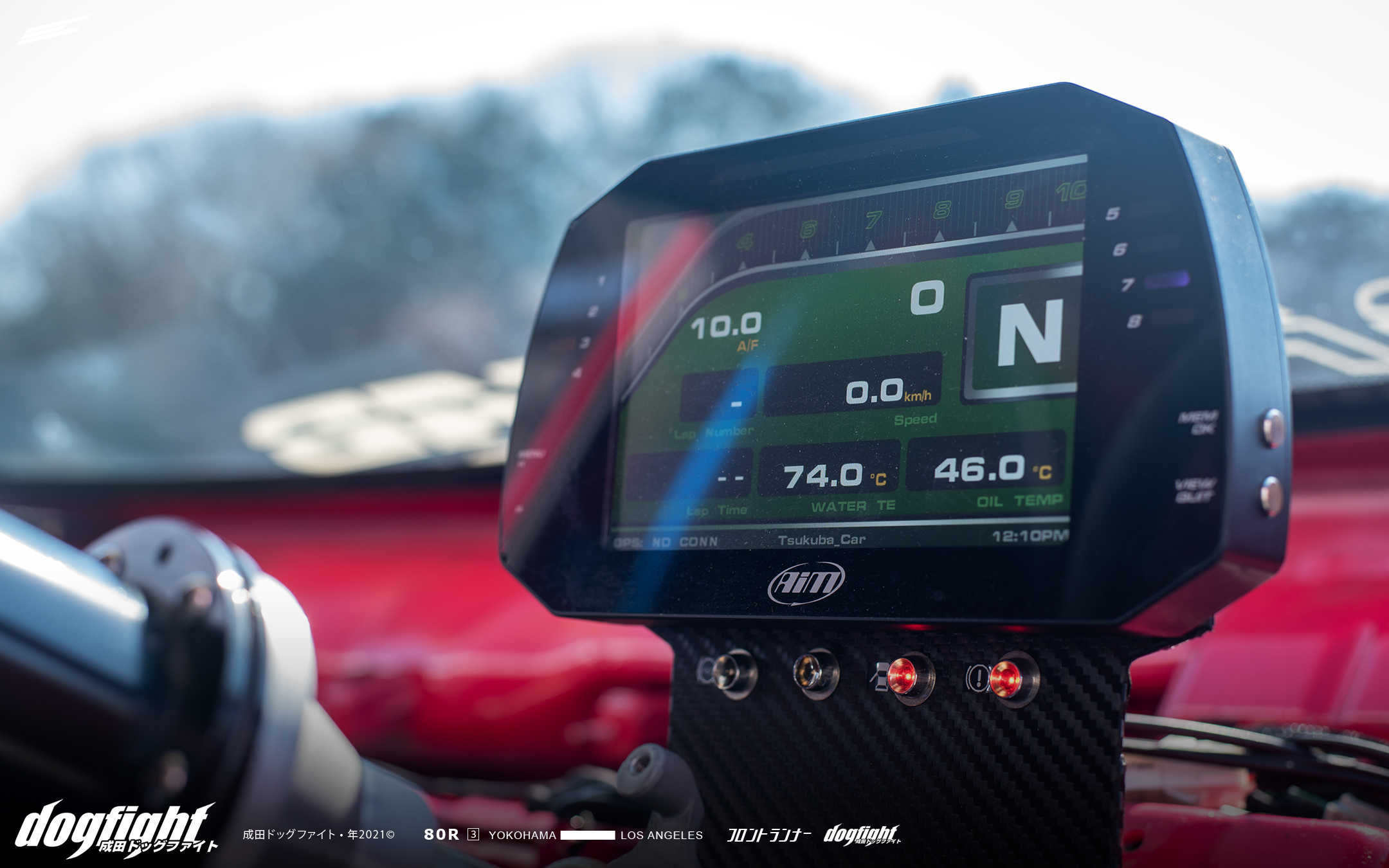 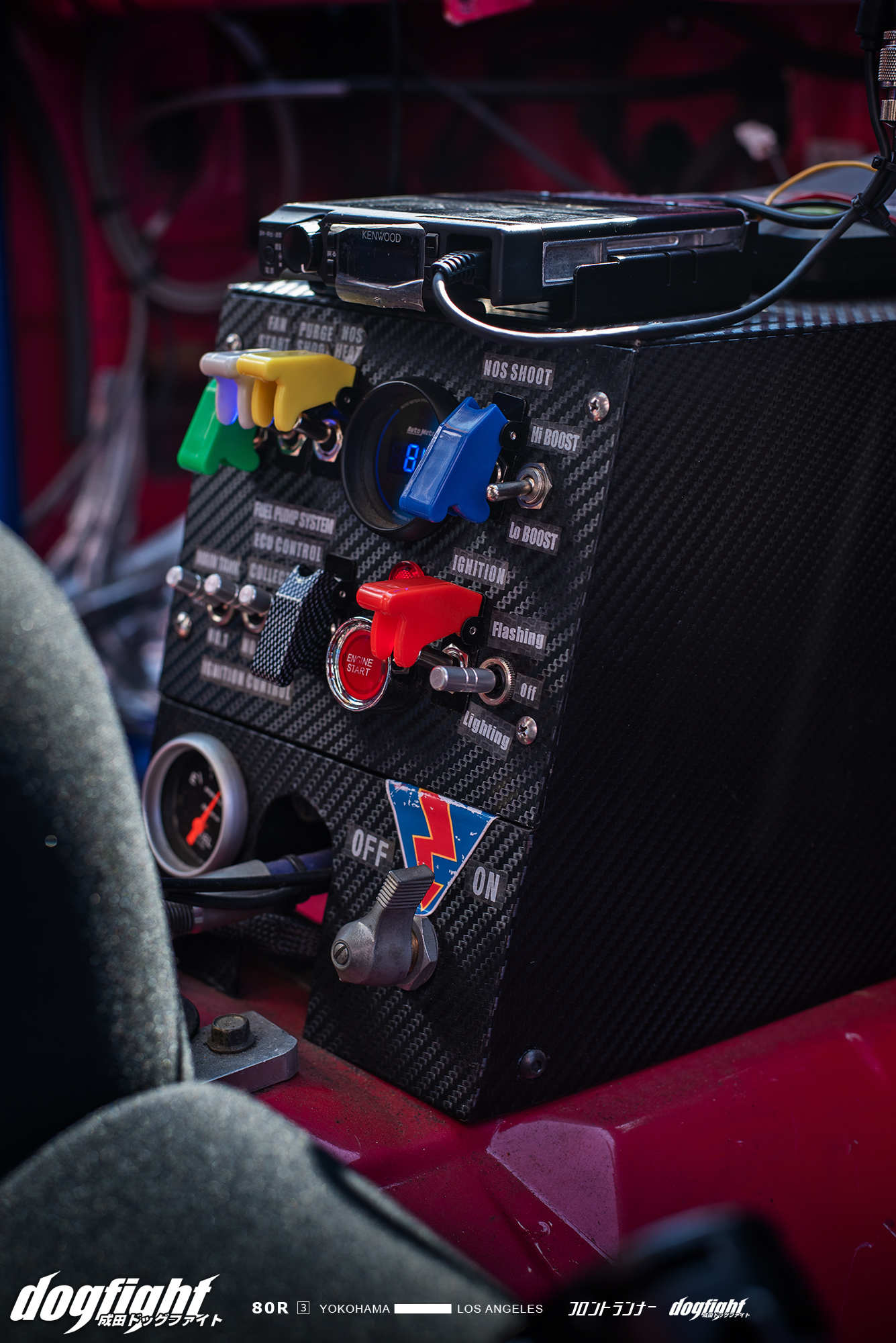 Ignition, ECU and nitrous controls sit in a custom carbon housing at the front of the center console.  A Kenwood radio allows Oya communication to Mr. KBC on track. 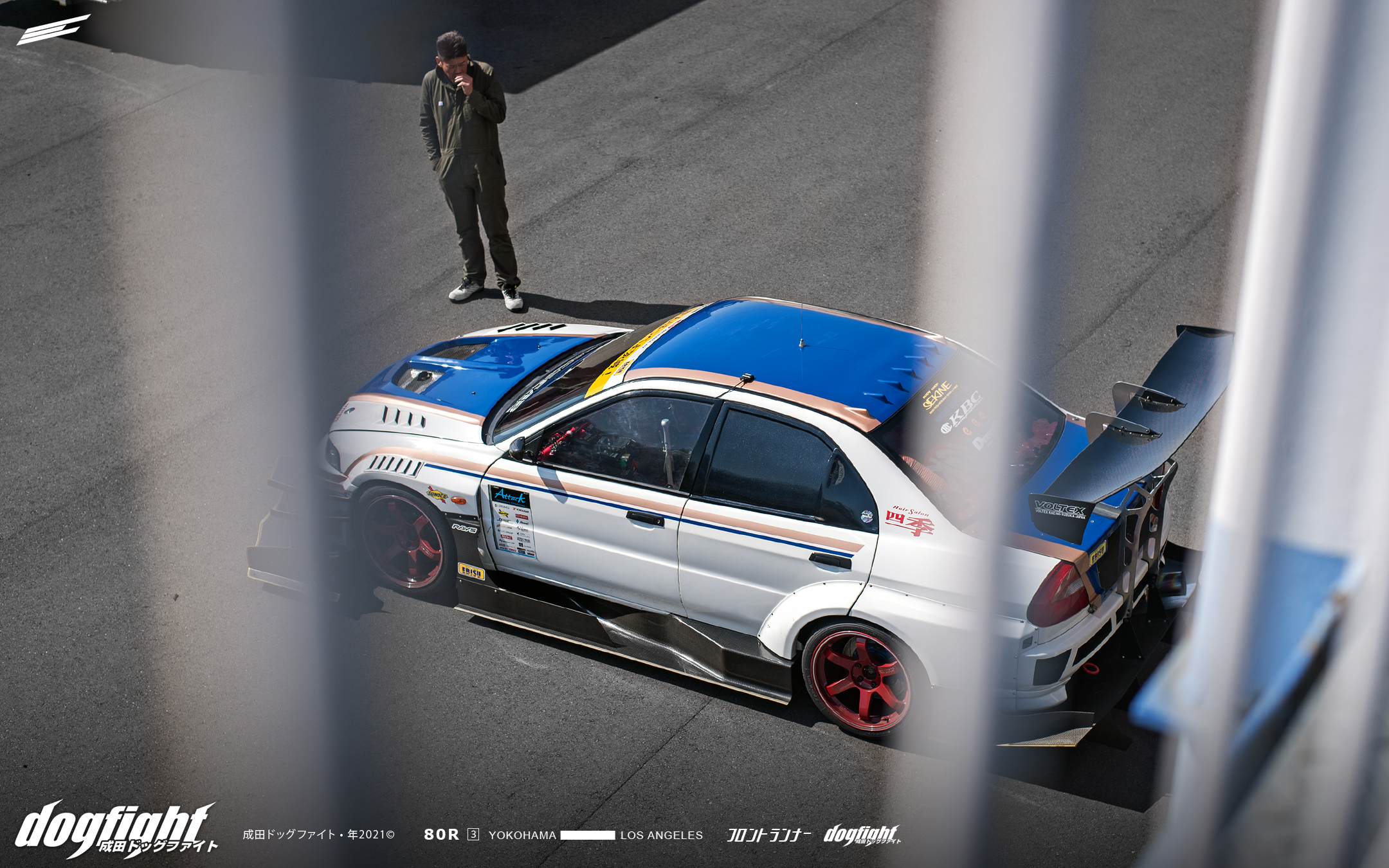 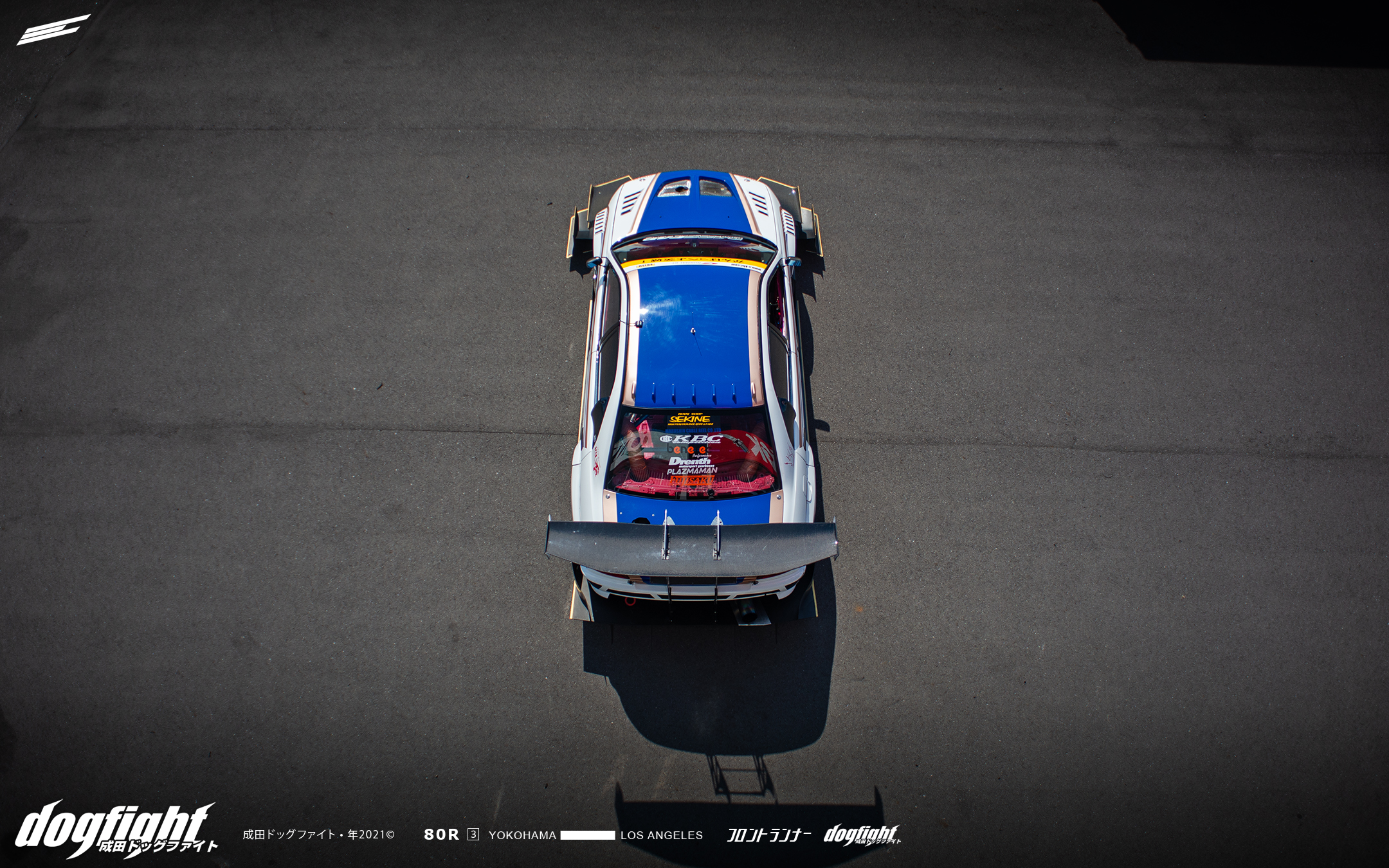 A shot we used to promote Volume 3 of 80R, which unfortunately has ended up being postponed until 2022 due to Japan closures. 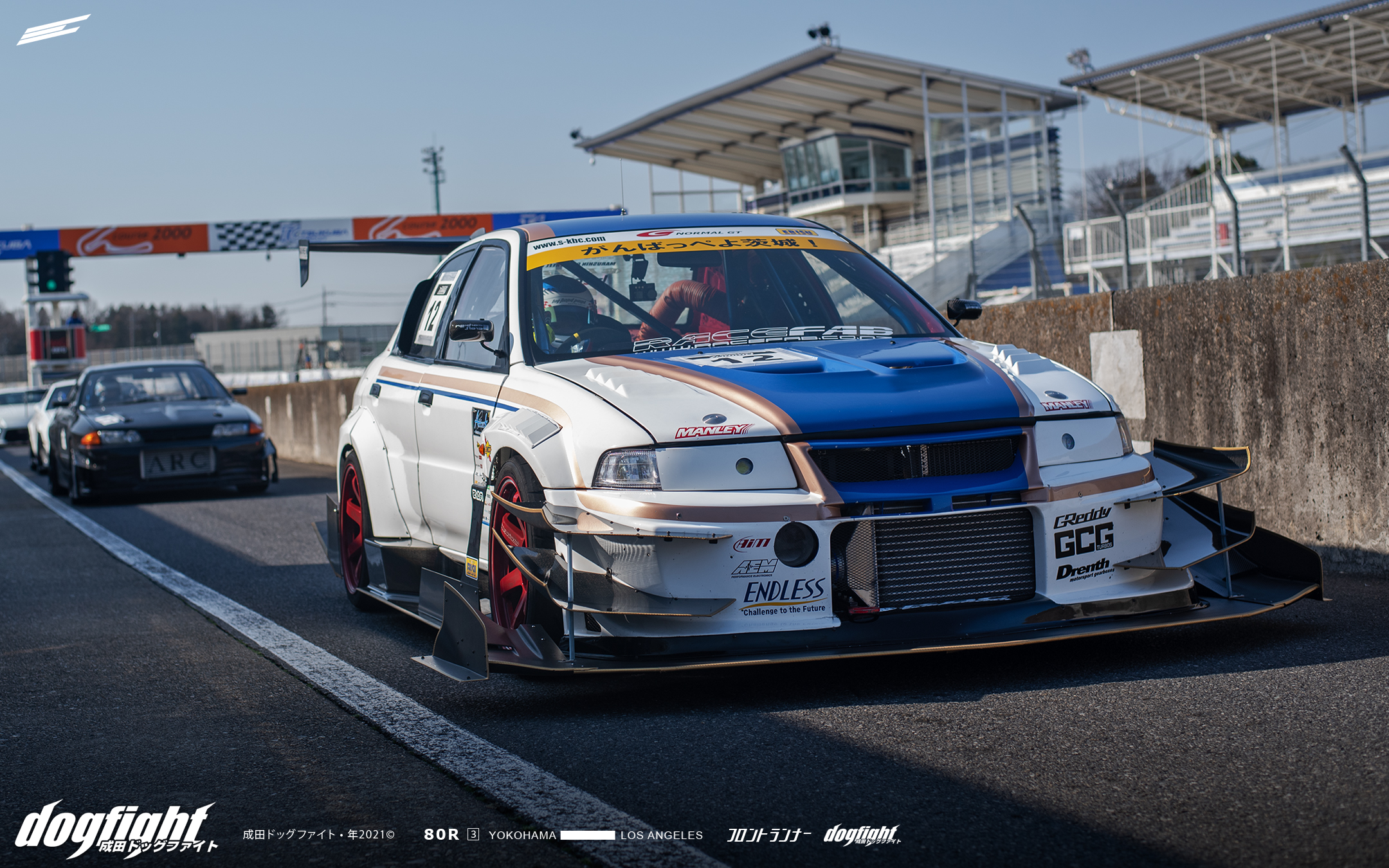 On track, Oya relies on his intuition.  Understanding the car and how it reacts is very important to him.  It’s a combination that results in a smooth and instinctual driving technique. 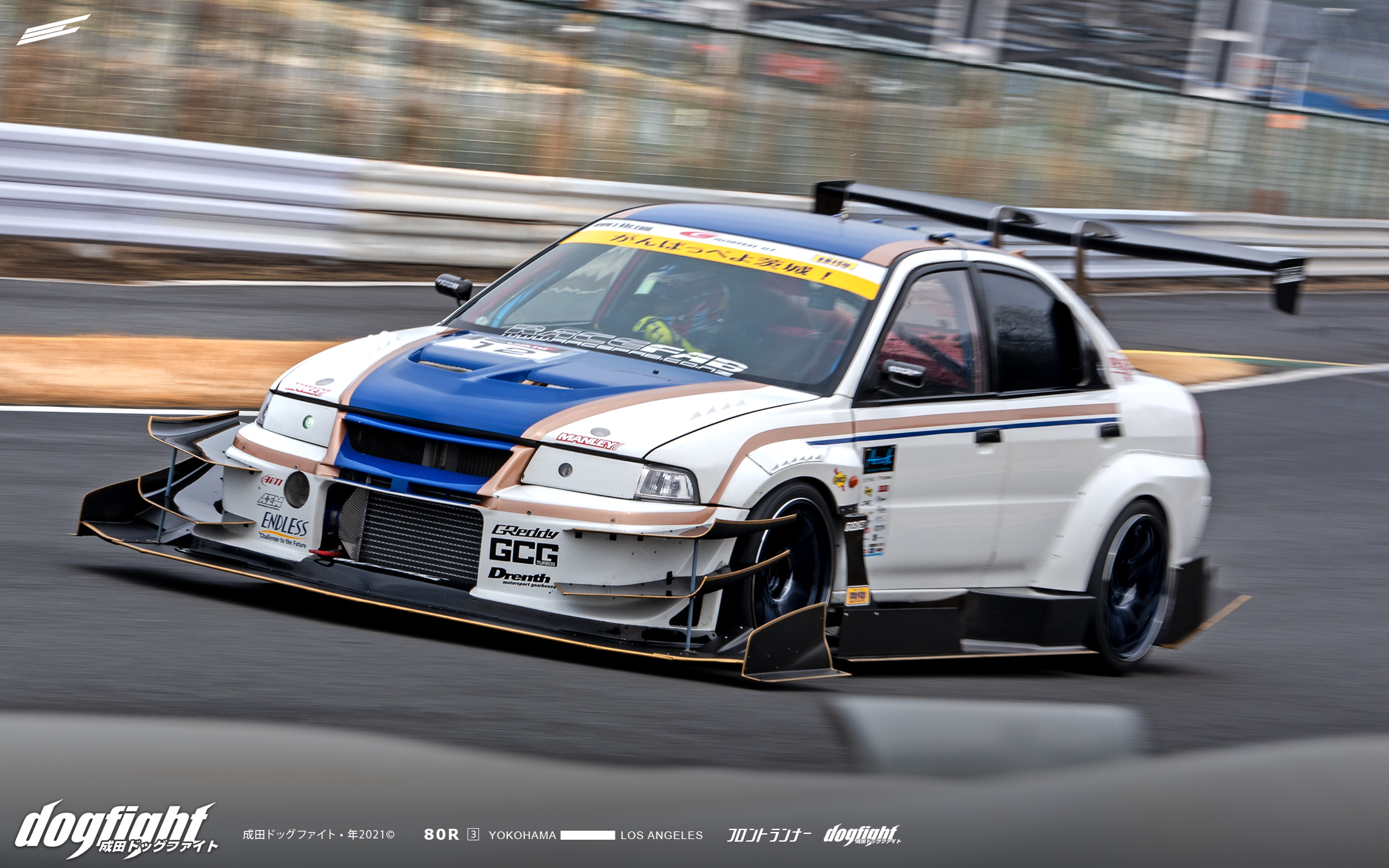 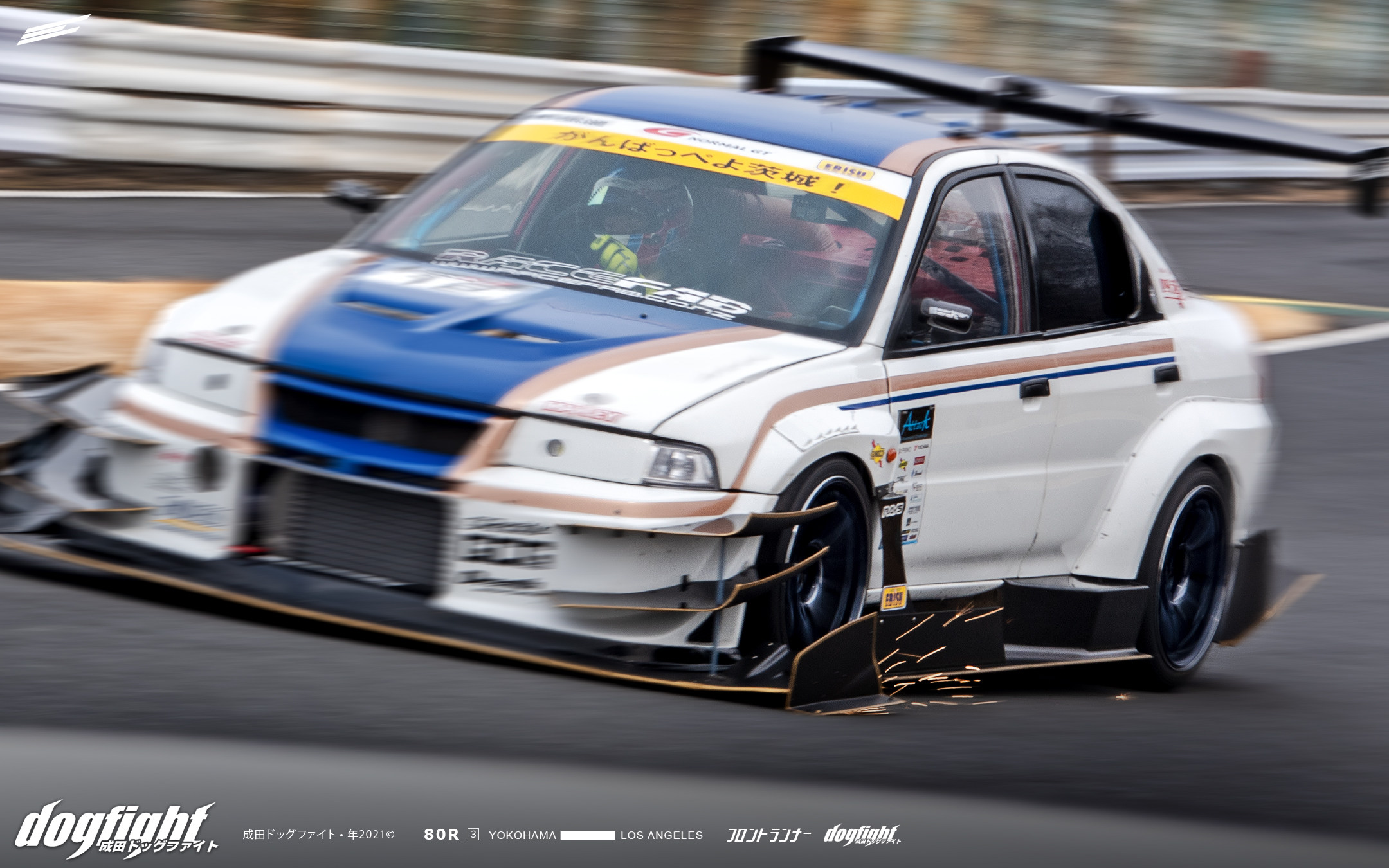 Planted through the final turn of TC2000. 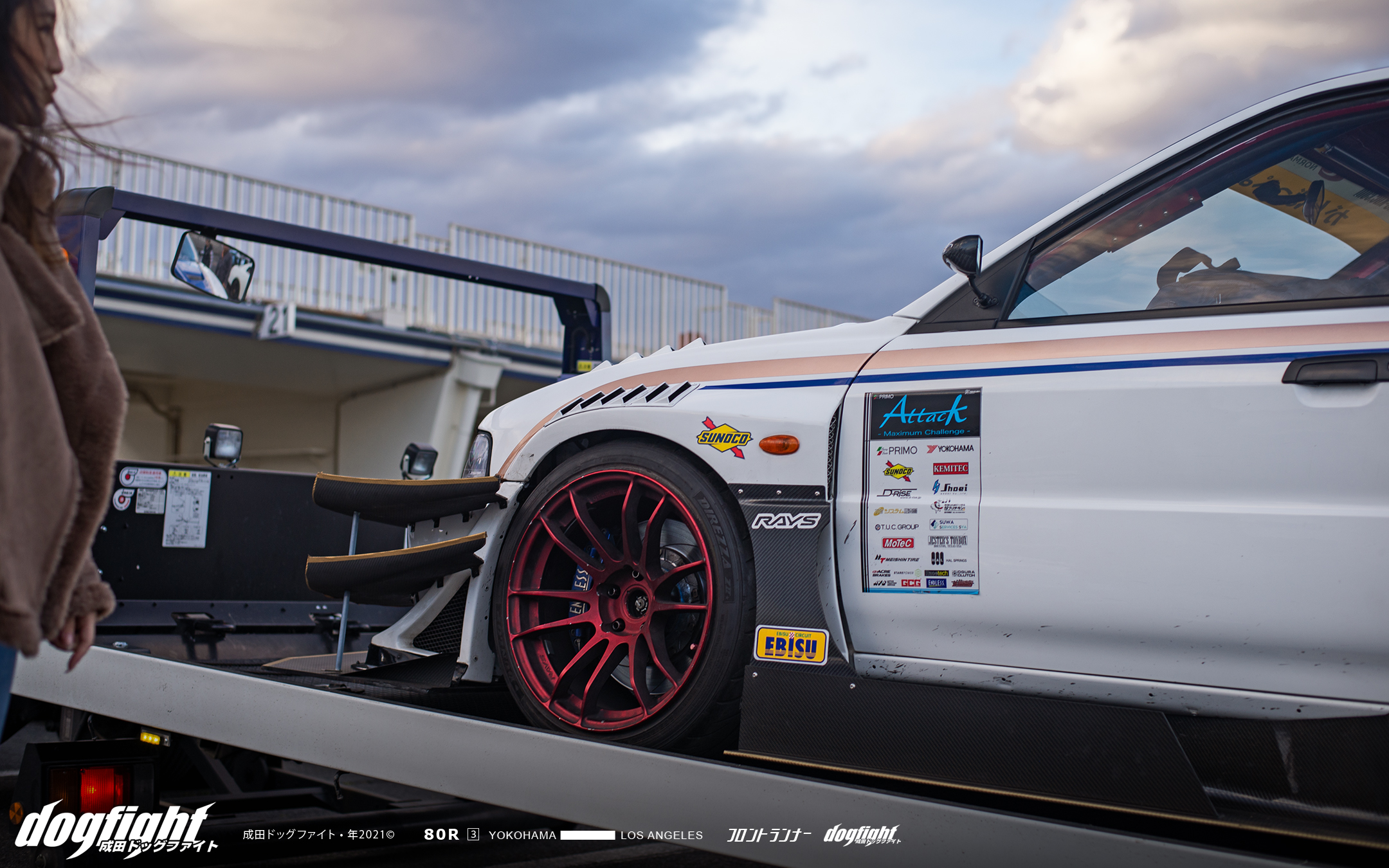 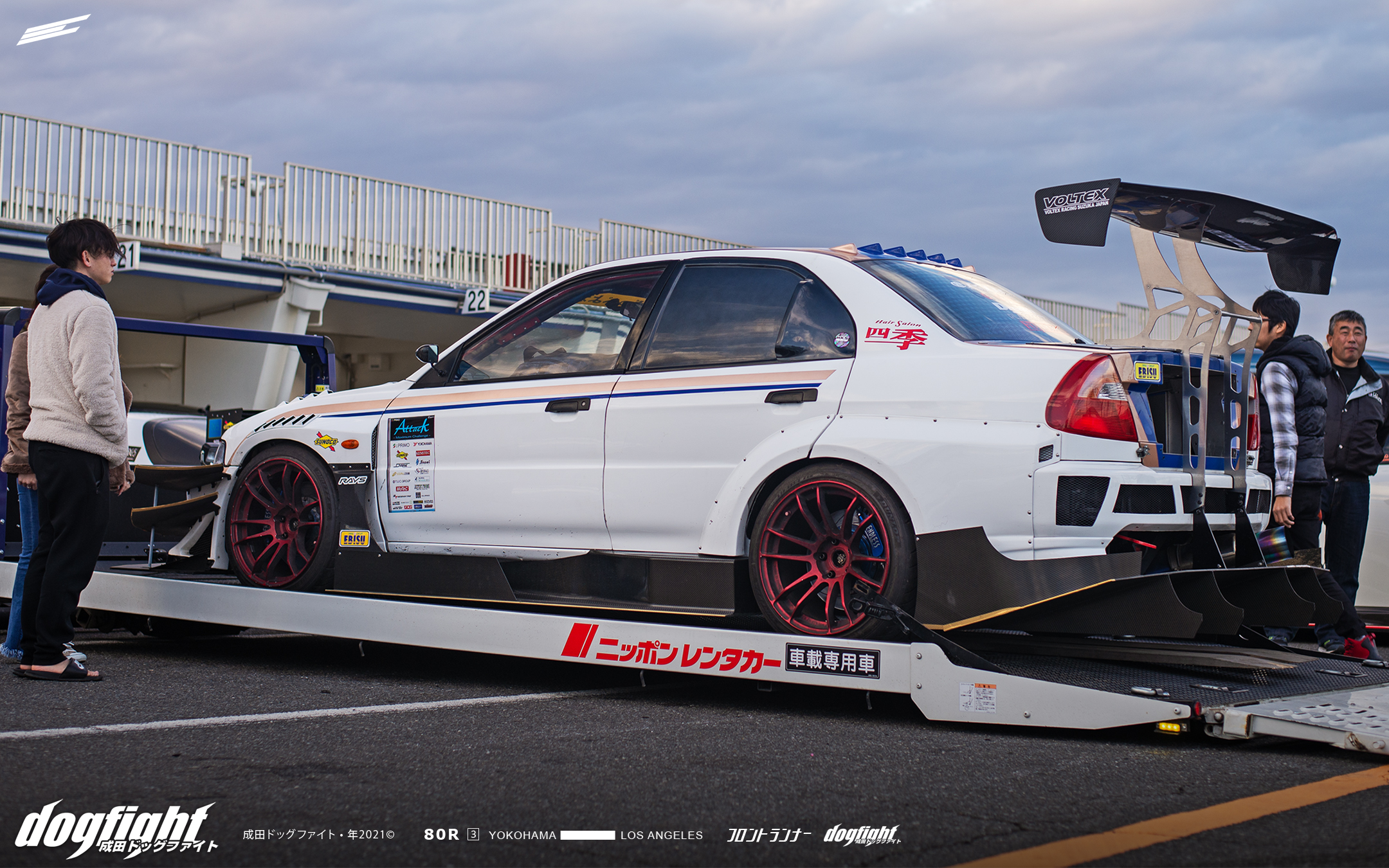 With a best time at Tsukuba of 57’143, and an updated goal time of 55 flat, next season is looking promising for the duo.  Already one of the fastest CP9A’s in Japan, Oya looks to extend his prowess behind the wheel.  Next season will be very exciting to say the least. 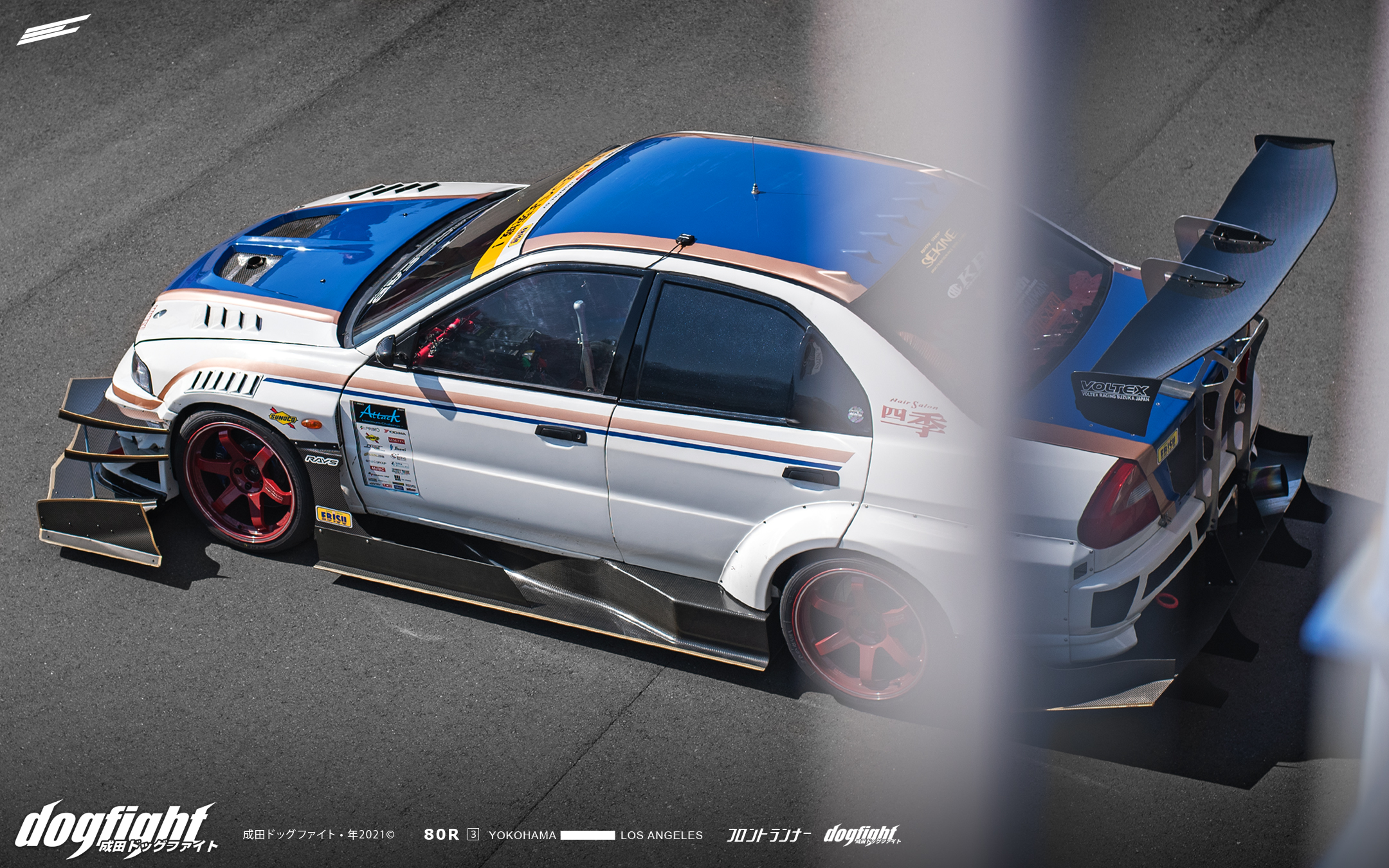 While not at work or working on the Evo, you can find Oya playing a relaxing 18 holes on one of the many golf courses in Ibaraki.  Hoping to revisit this car for another photoshoot early in 2022.

Visit our YouTube channel for a small walkthrough video of the car: