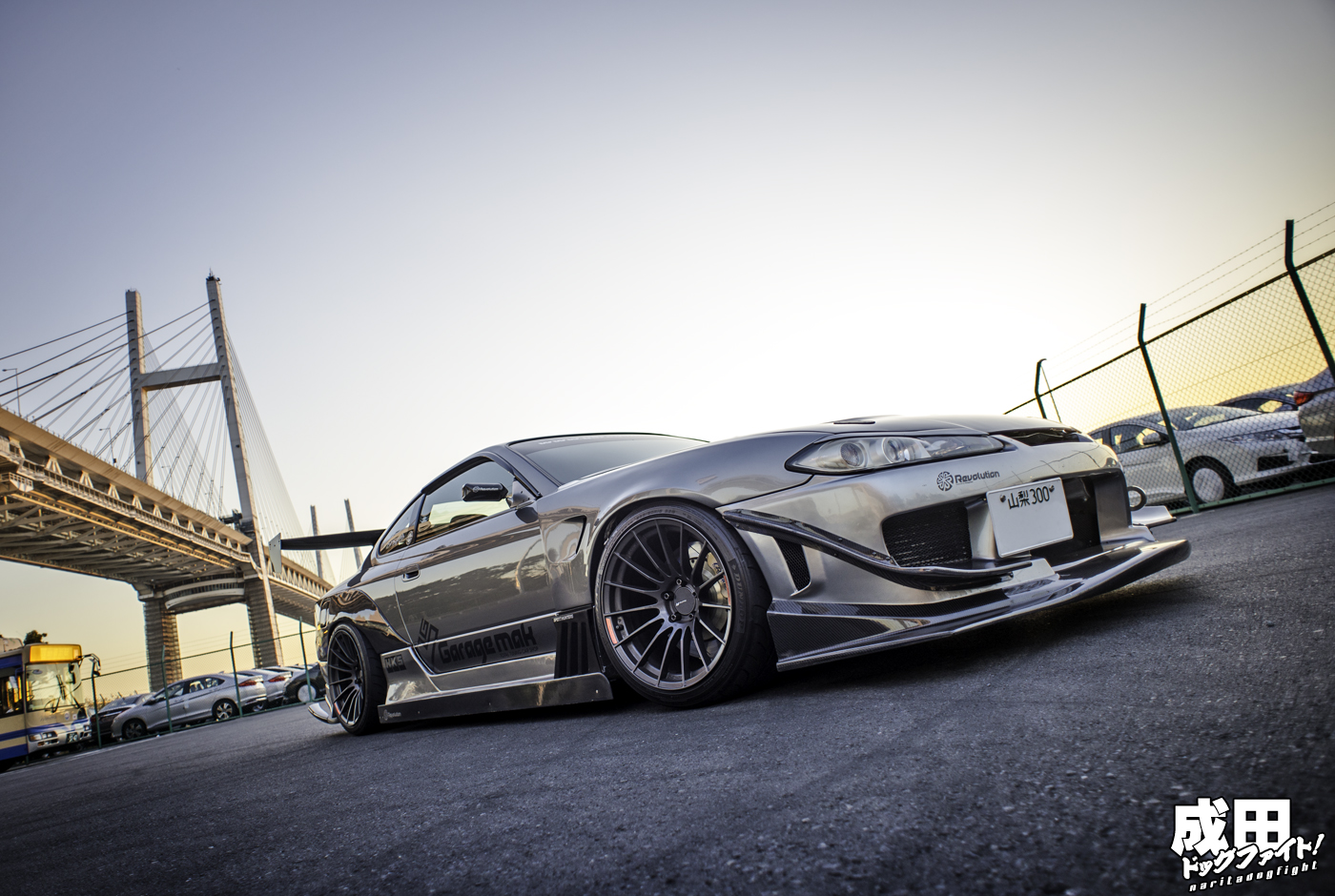 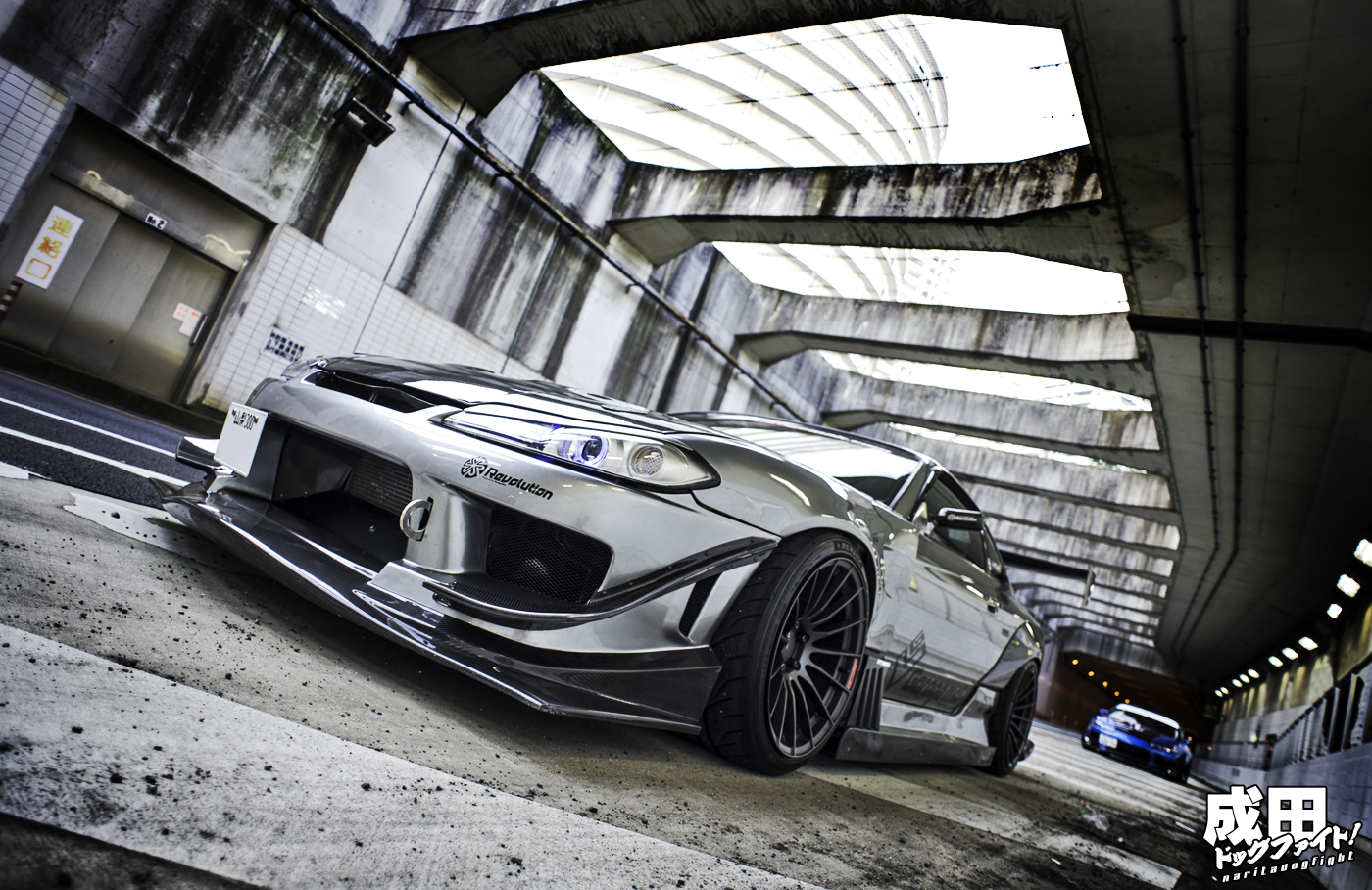 No stranger to magazine interiors, Hiroshi Amemiya’s S15 has been the center of attention for many publications throughout the past year or so including Super Street, Hyper Rev, Option2 (twice!).  In fact, Enkei even brought it on as the poster child for it’s marketing campaign awhile back.  No doubt, if you’ve opened an Option or Option2 this year you’ve seen his car (especially the issue that featured the two Mak S15’s) in their advertisements.  With that being said, I doubt you’ve seen it like this before.

Along with Baki and Seki, Ame-san made the trek to Yokohama to attend Winter Cafe as well – and just like the others, I was able to get an up close look at it. 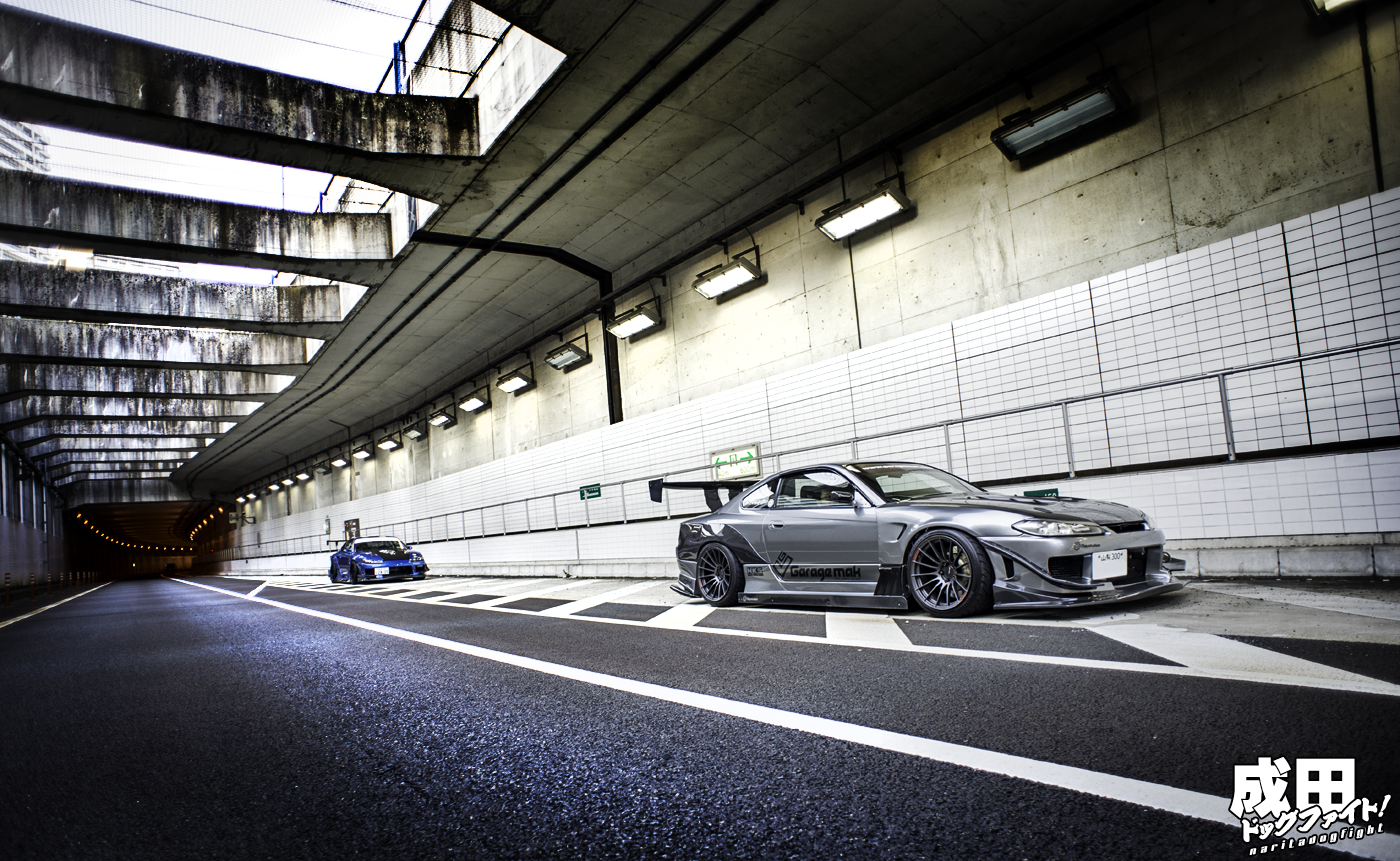 Up until now, on our site anyway, you’ve mainly seen shots of Baki’s S15.  As we’re good friends, I see him more often than the other Mak crew.  Though, comparing the ‘Grey Shark’ to Baki’s blue counterpart, you find yourself with a car built with a completely different mindset.  Where Baki’s S15 is like the younger, ‘hit up the club on the weekends’ type of sibling, Ame’s build would be the mature, older brother who is married with two kids.  They share many outer Garage Mak body components, but utilized a bit differently. 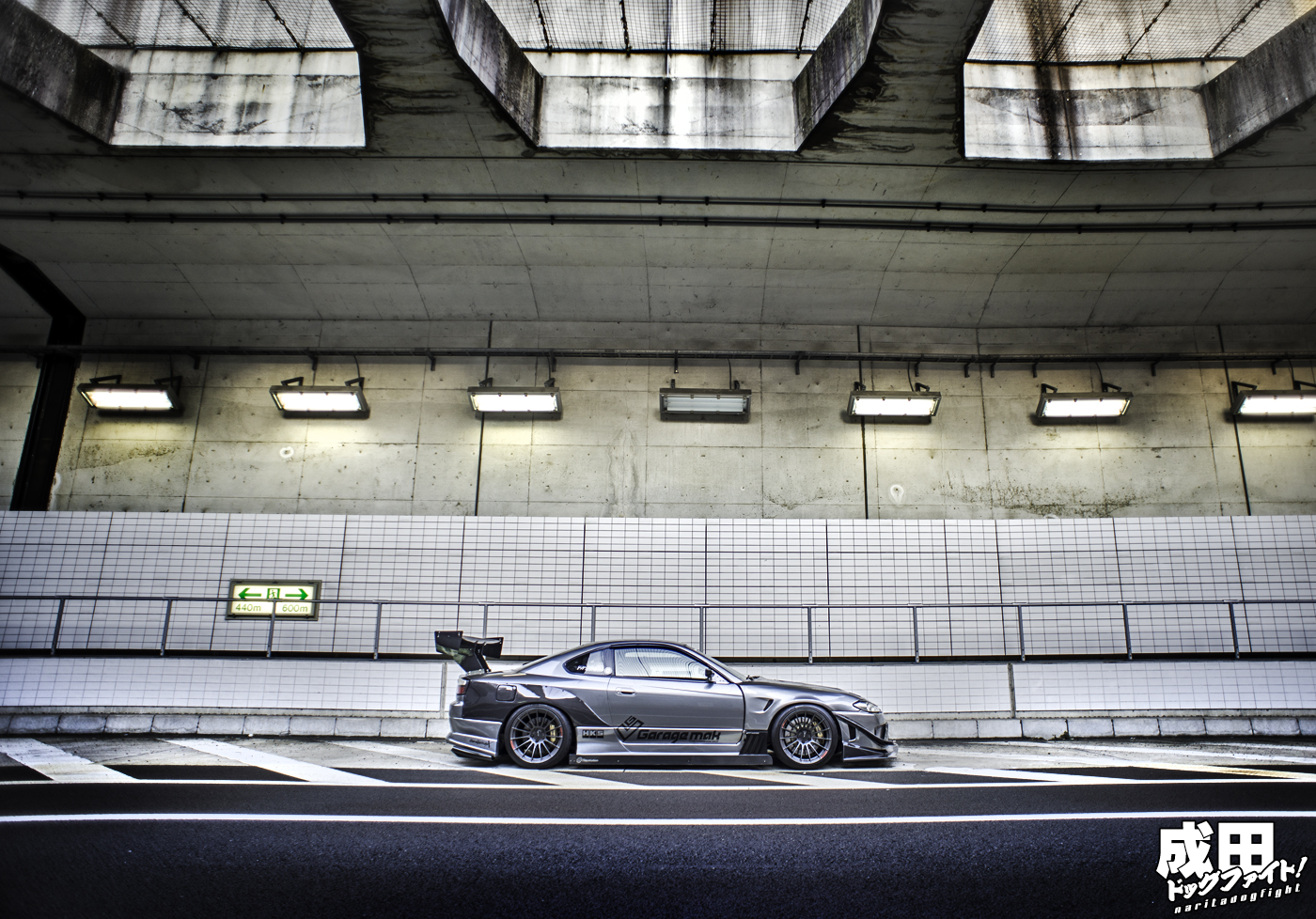 For example, the rear overs left in an unpainted state, exposing the beautiful, black carbon weaves to contrast against the shiny grey of the paint.  He even says, because the aero is so gorgeous, and the color so subdued, that the graphics were a no brainer – black!  Keeping it simple has never been so perfect. 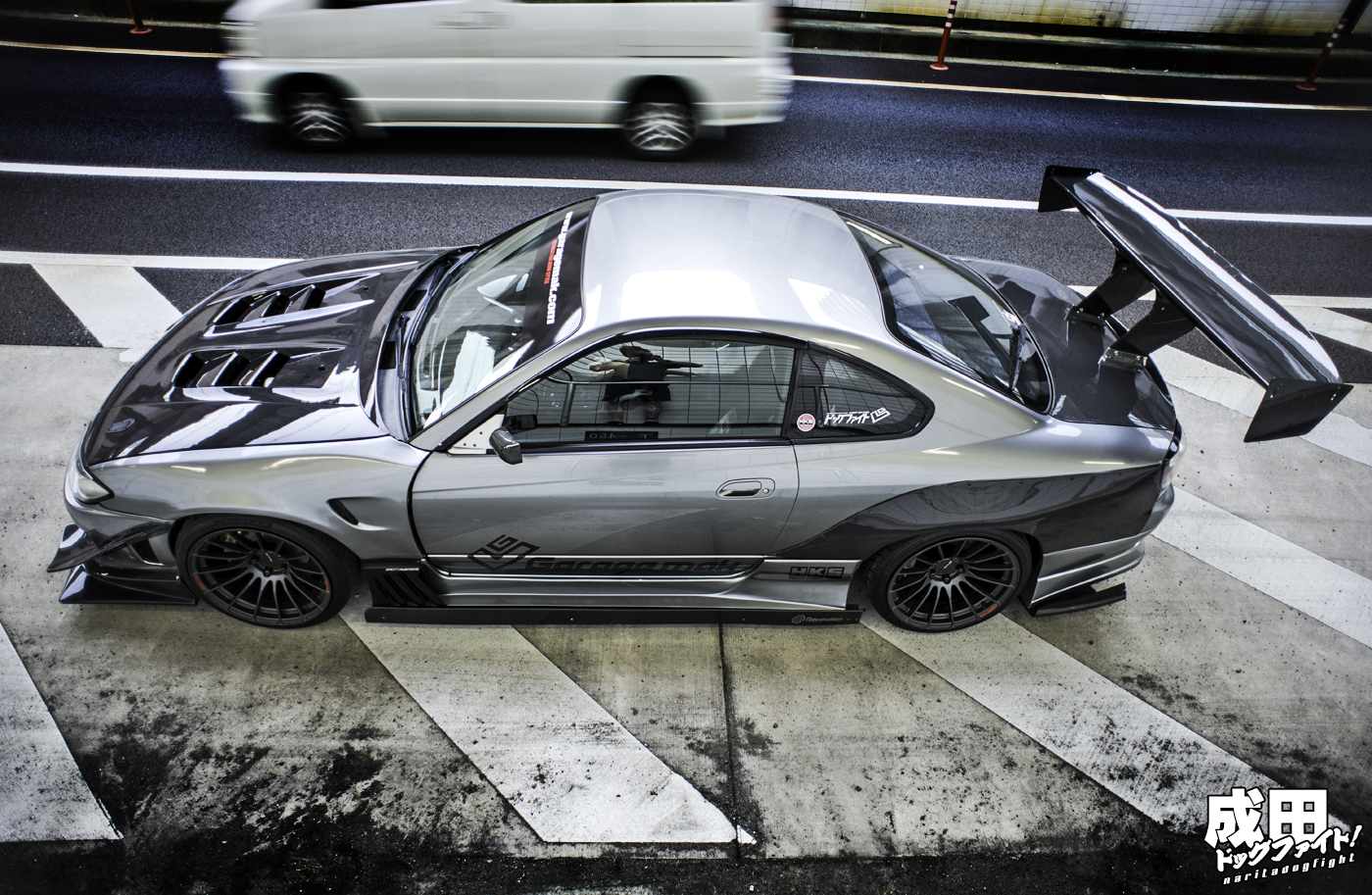 Ame’s car is the perfect combination of street and circuit; an amalgamation of the two if you will.  Where else are you going to find a car with gullwing doors that does a 59 second lap around TC2000 (59.3)?  Oh, you didn’t know?  Well, yeah, NOB piloted this very car around Tsukuba under one minute, and no doubt, with a bit more testing it could be closer to the 58 mark.  Garage Mak, although known for it’s beautifully crafted builds, is also nothing to be passed over on the circuit. 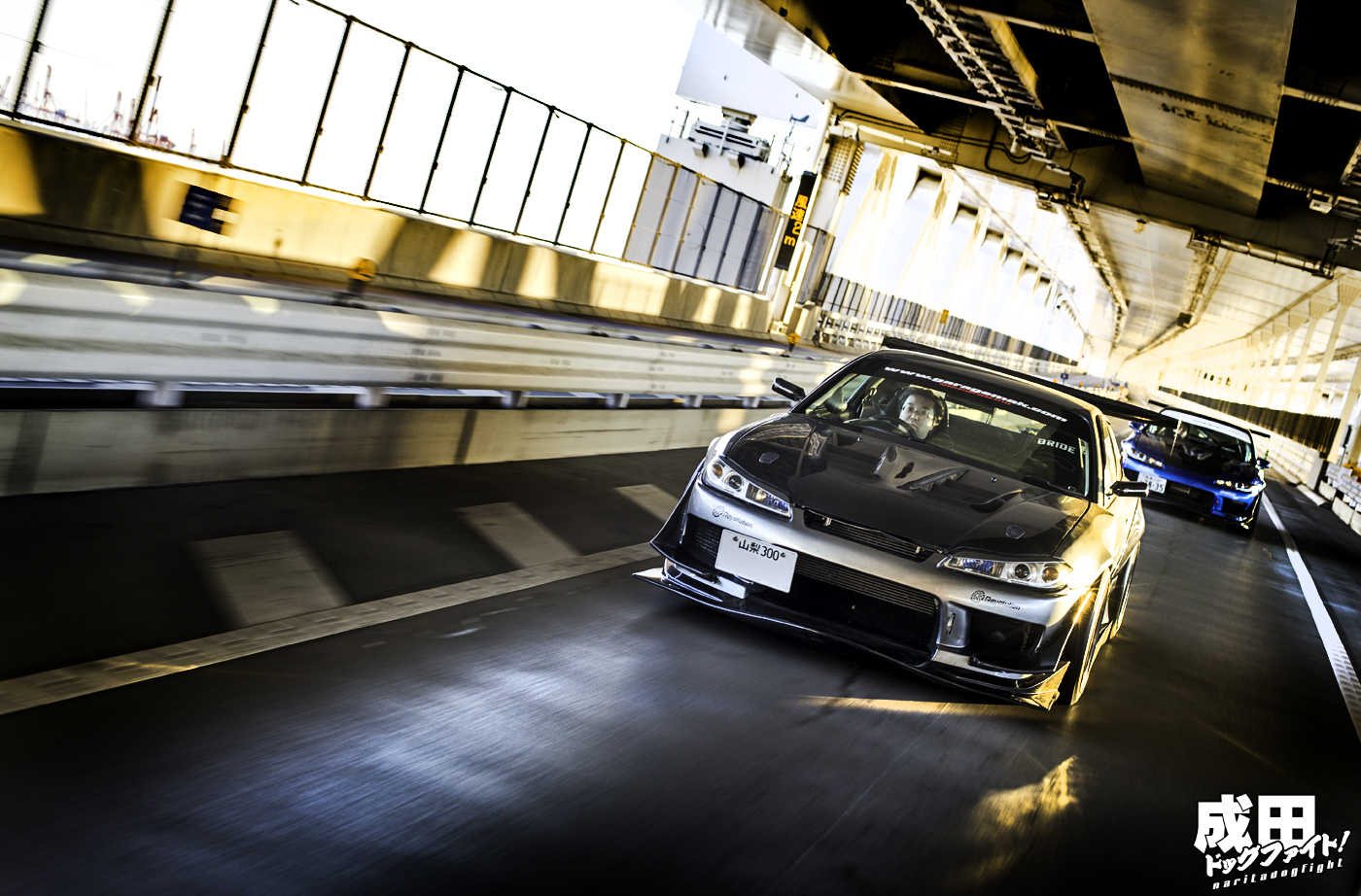 Before reaching the first location we were able to get onto some open road to take a few rolling shots – this one inside the Bay Bridge.  I like how the sunlight shines in through the West side of the bridge. 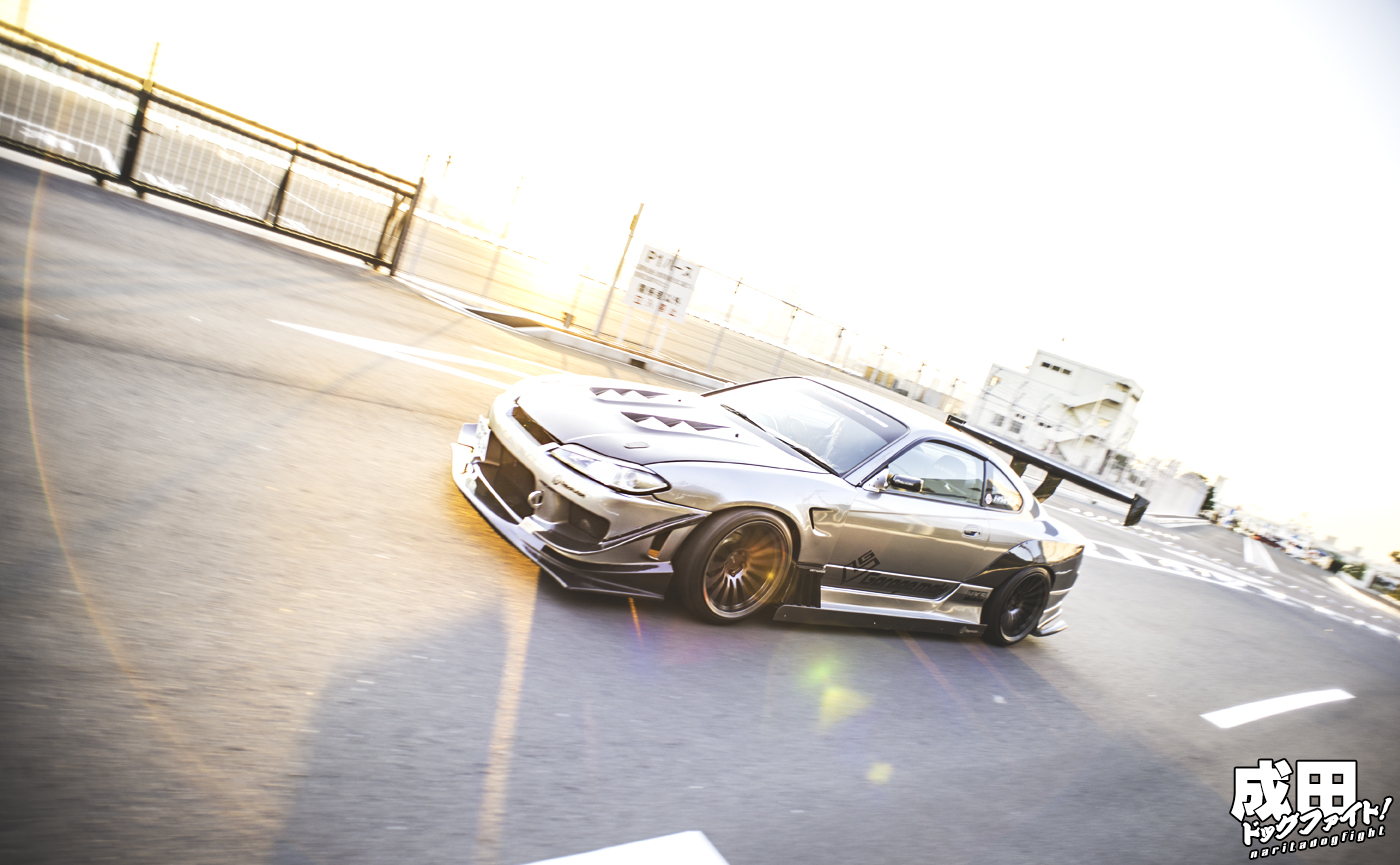 Ame’s car would almost blend into the asphalt if it weren’t for the sunlight accentuating the curvature of the Garage Mak aero. 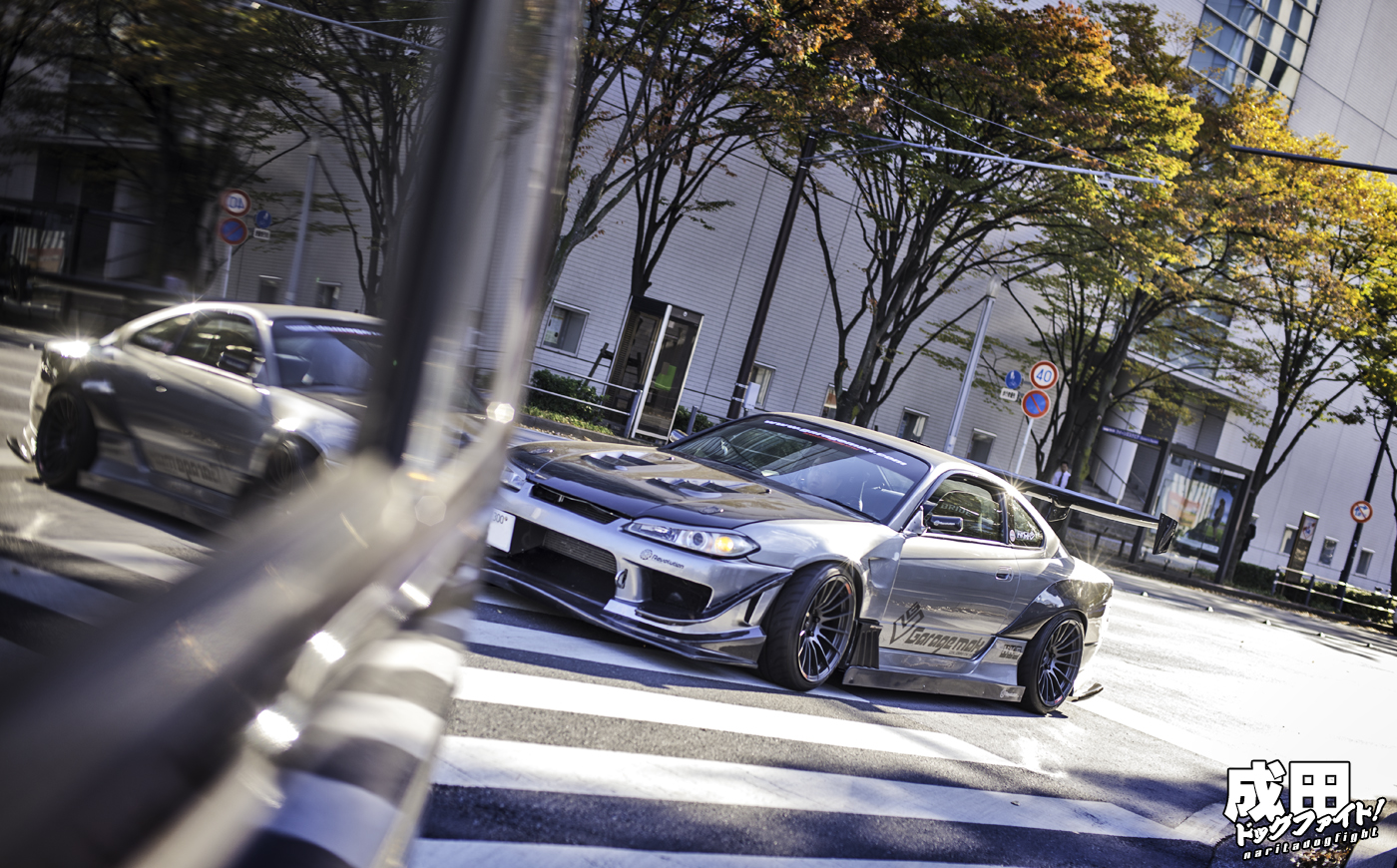 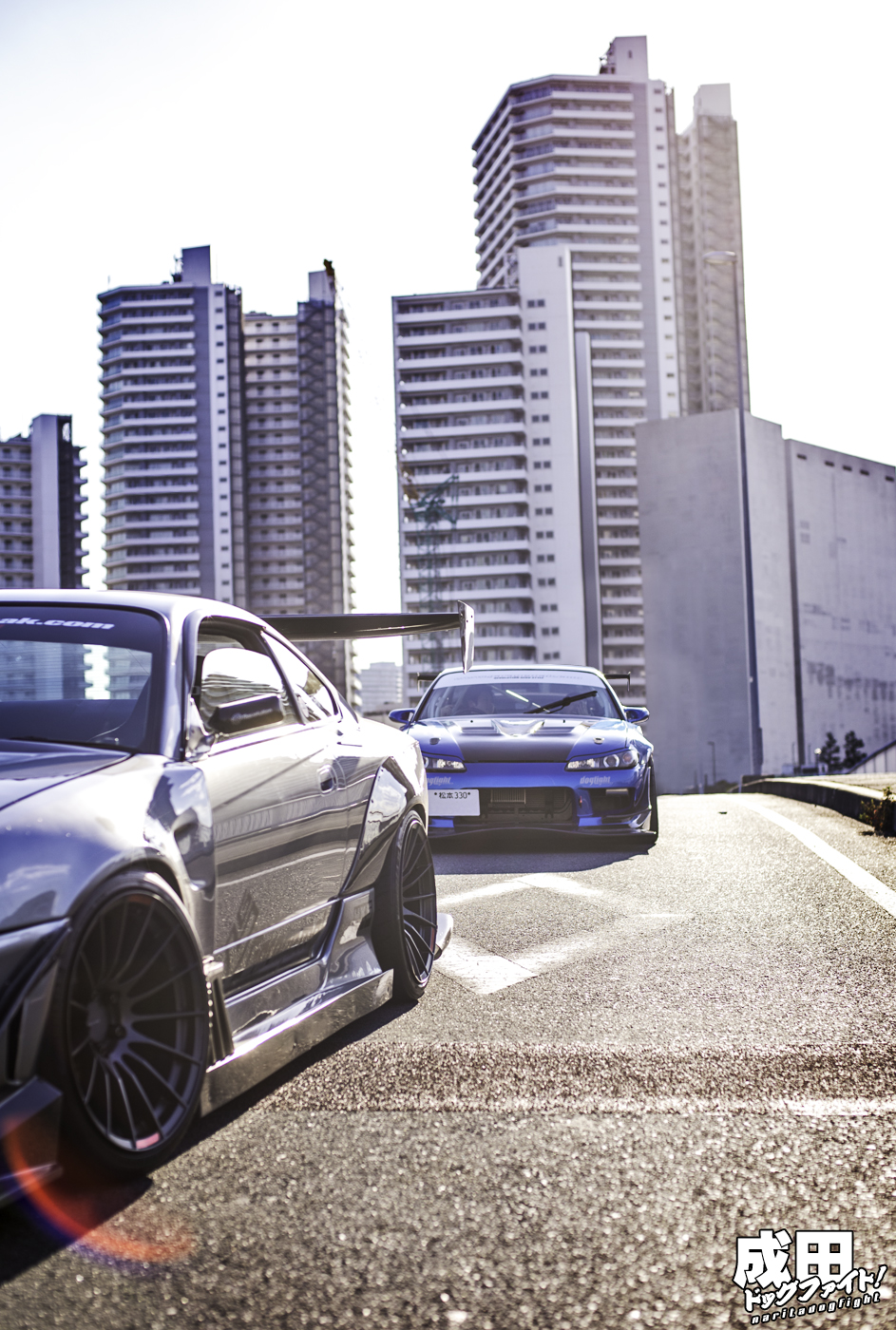 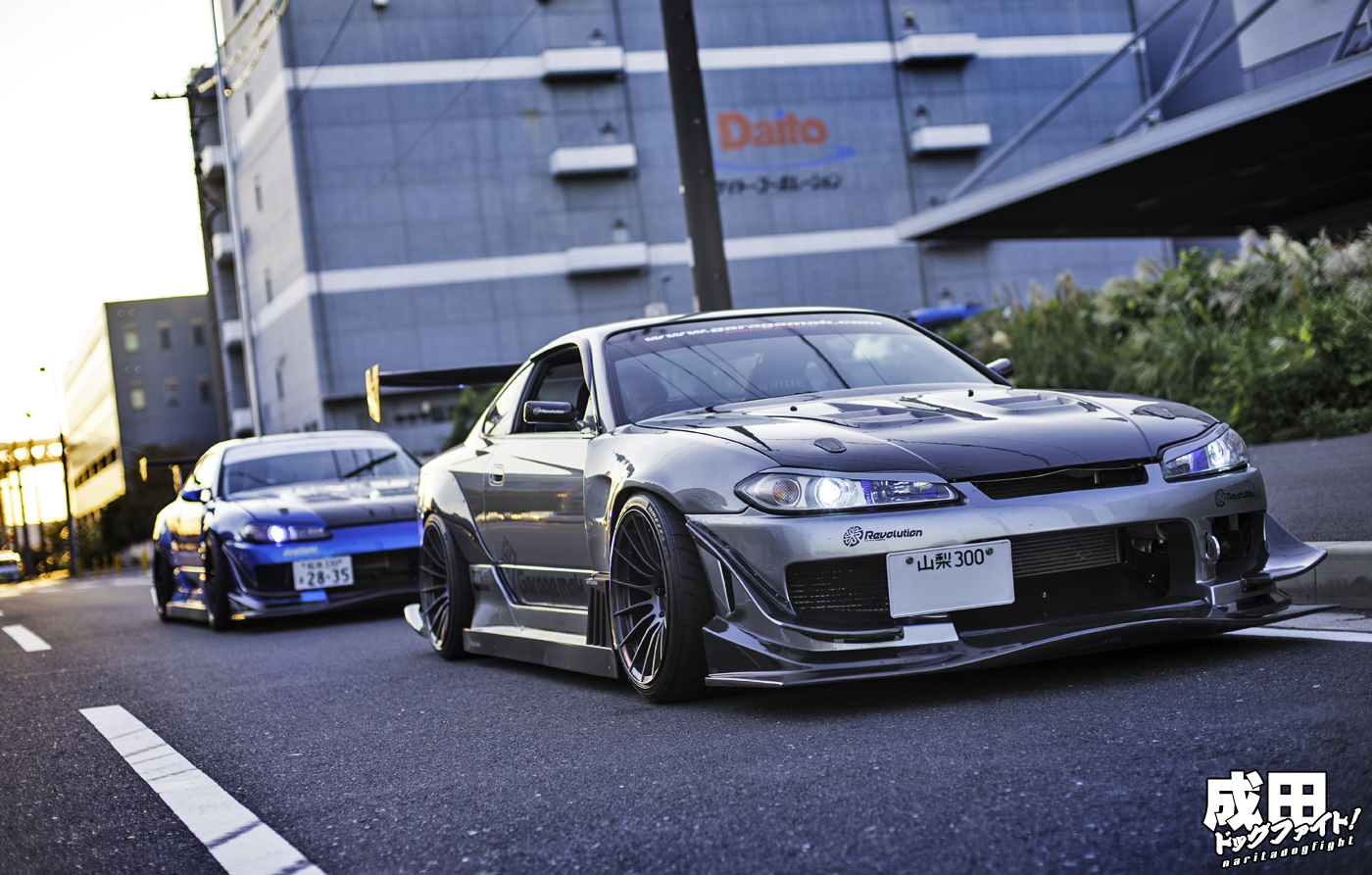 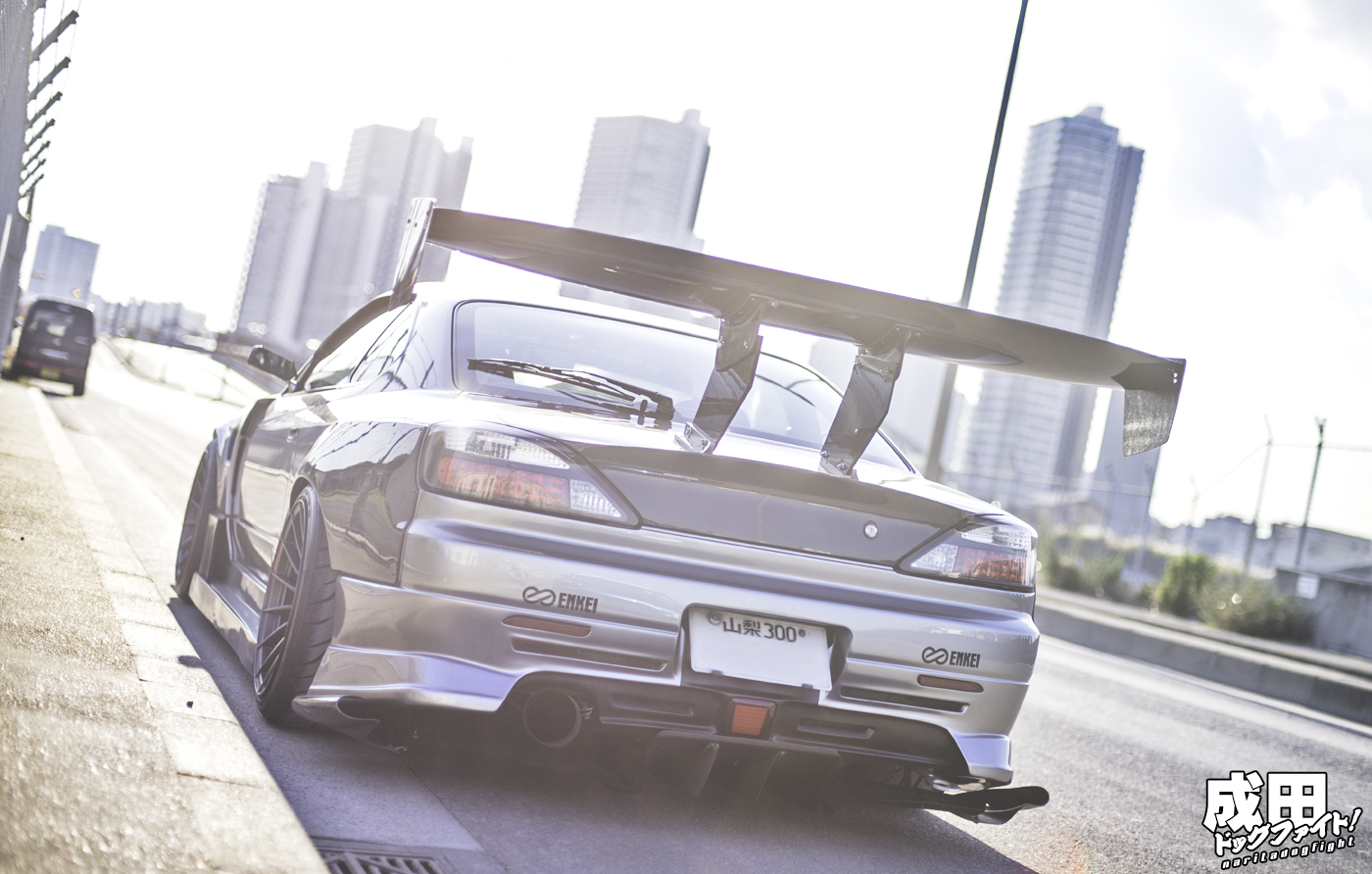 Foregoing the rear canards in favor of an integrated carbon rear diffuser, Ame’s car takes on a bit more of street look from the back; aside from the massive GT Wing atop the trunk. 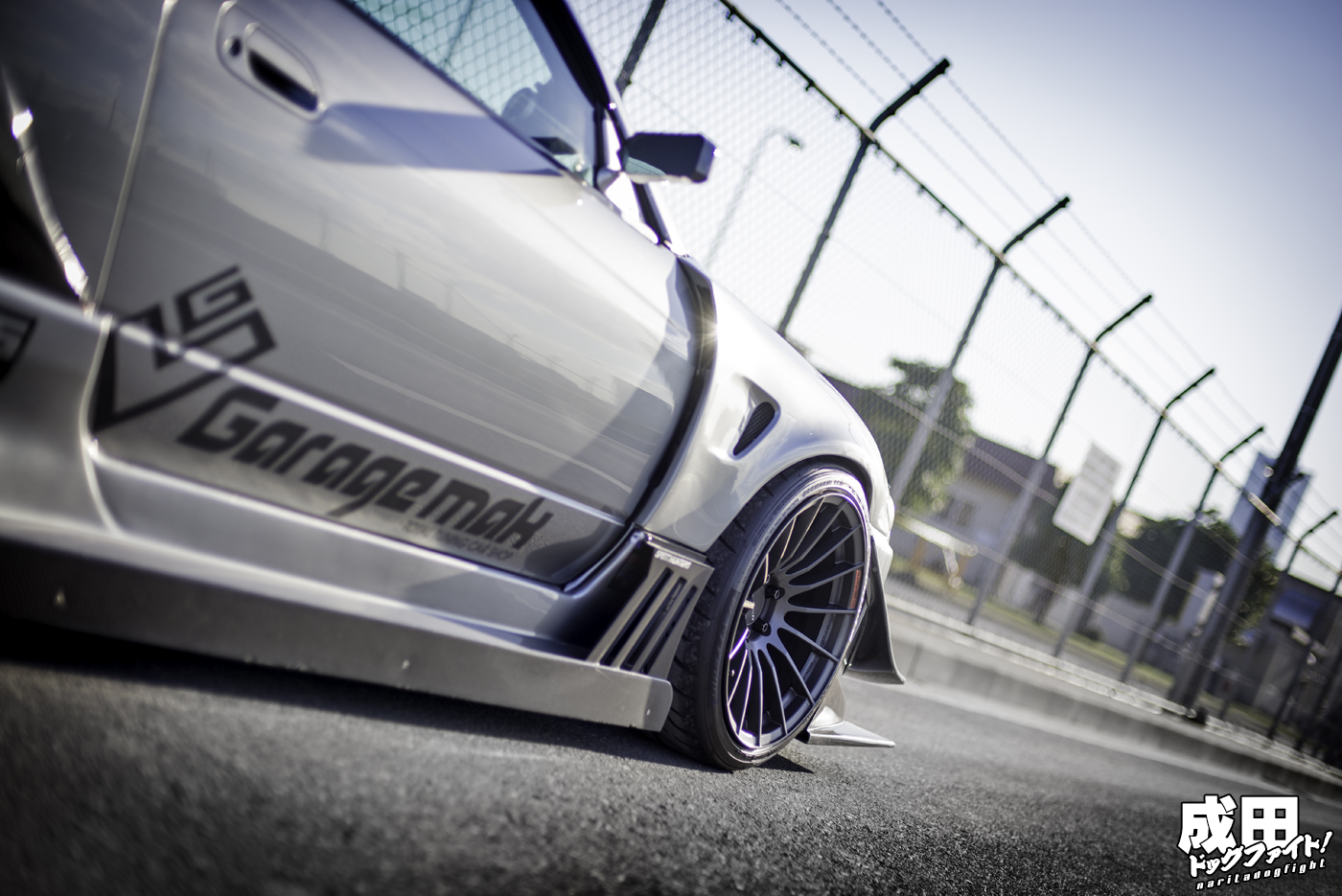 The peak of automotive aesthetic achievement. 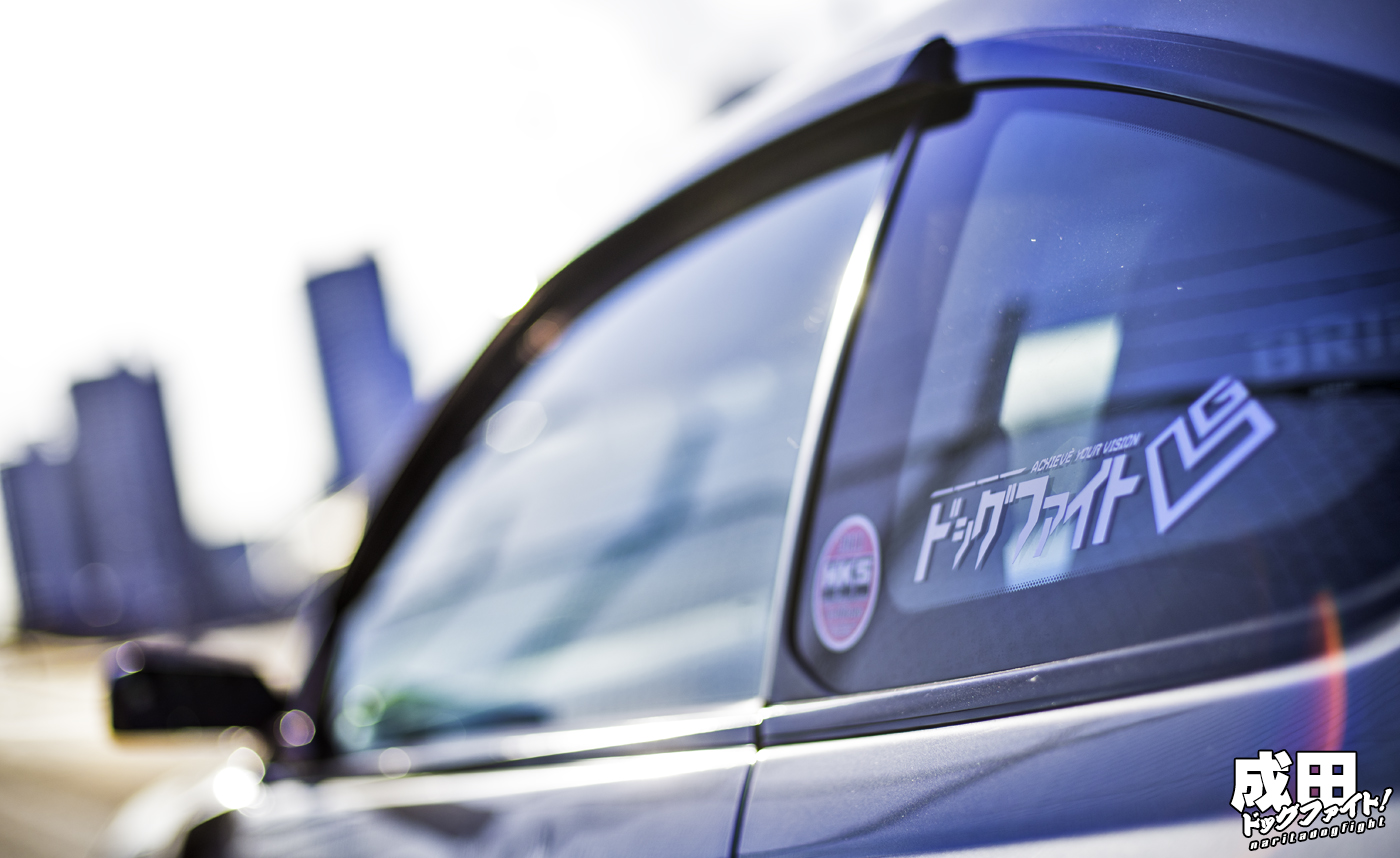 As Baki’s S15 was the flagship for the LINK Series, Ame chose to take on a more subtle approach to representing the collaboration, with smaller ‘Achieve’ type decals on the window… 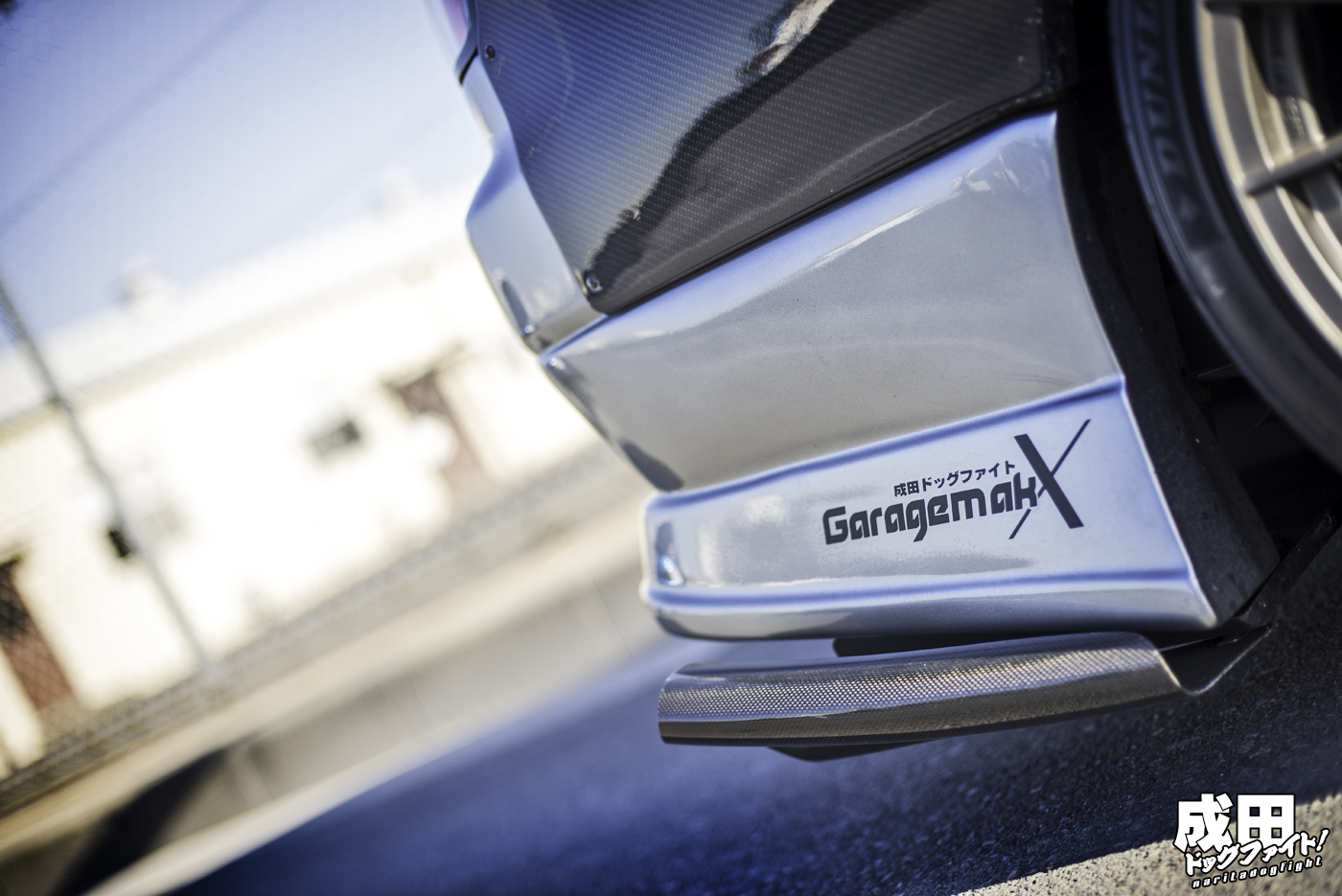 …and the official Total Auto Support Mak LINK decal on the rear bumper. 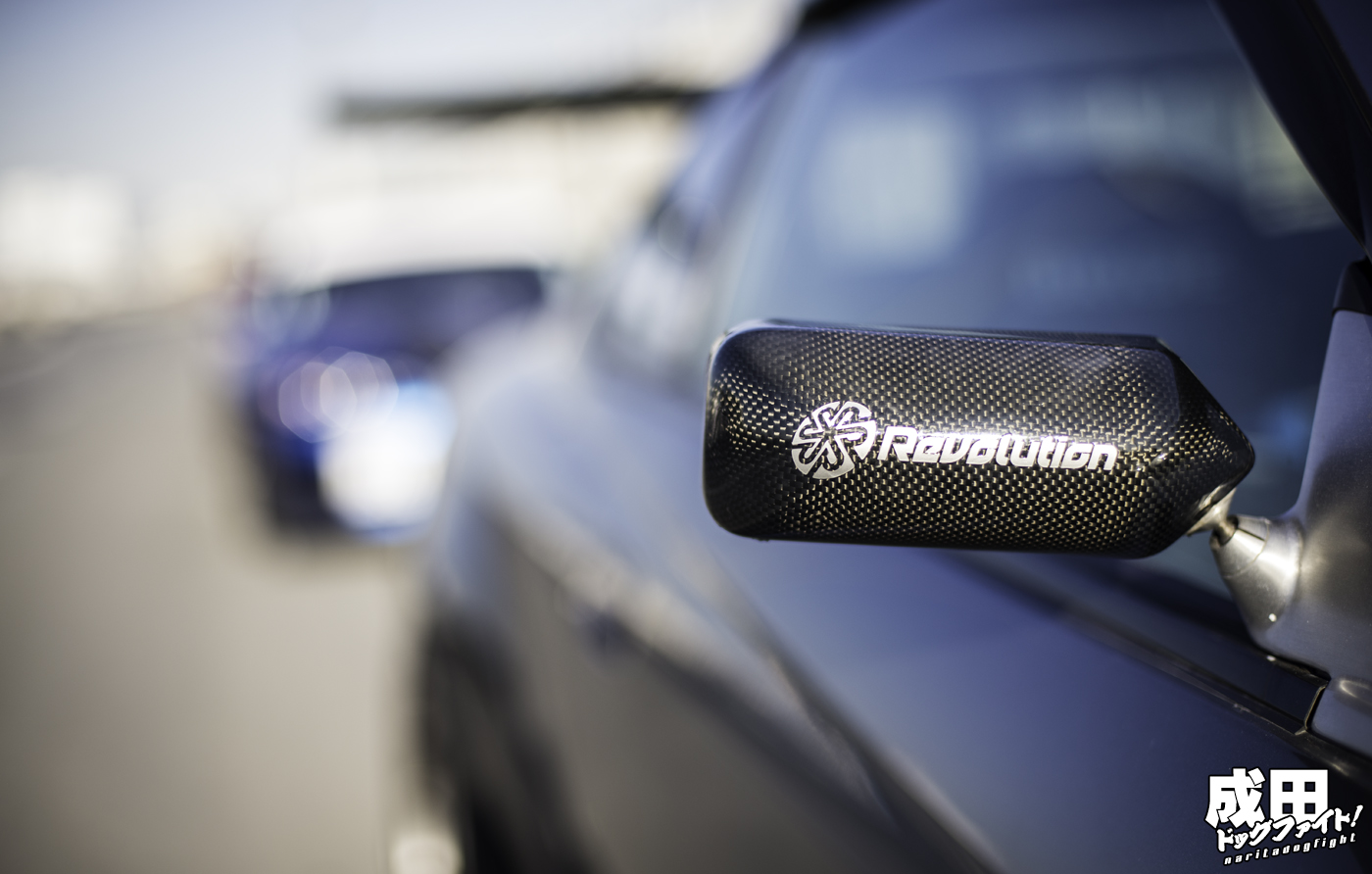 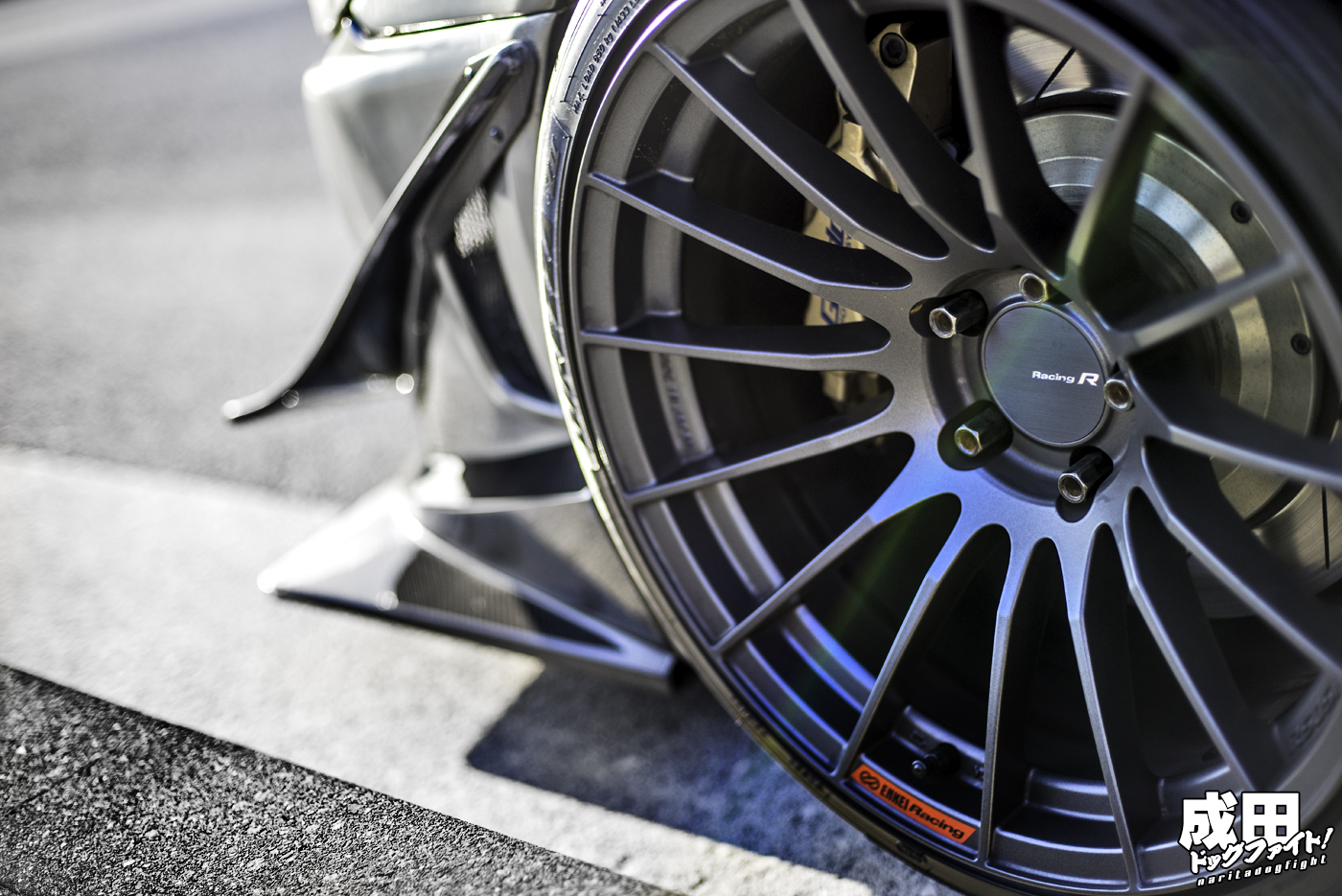 Hiding behind the new RS05RR’s is an upgraded GReddy 6-pot brake system that, no doubt, does a great job at bringing the car to a stop. 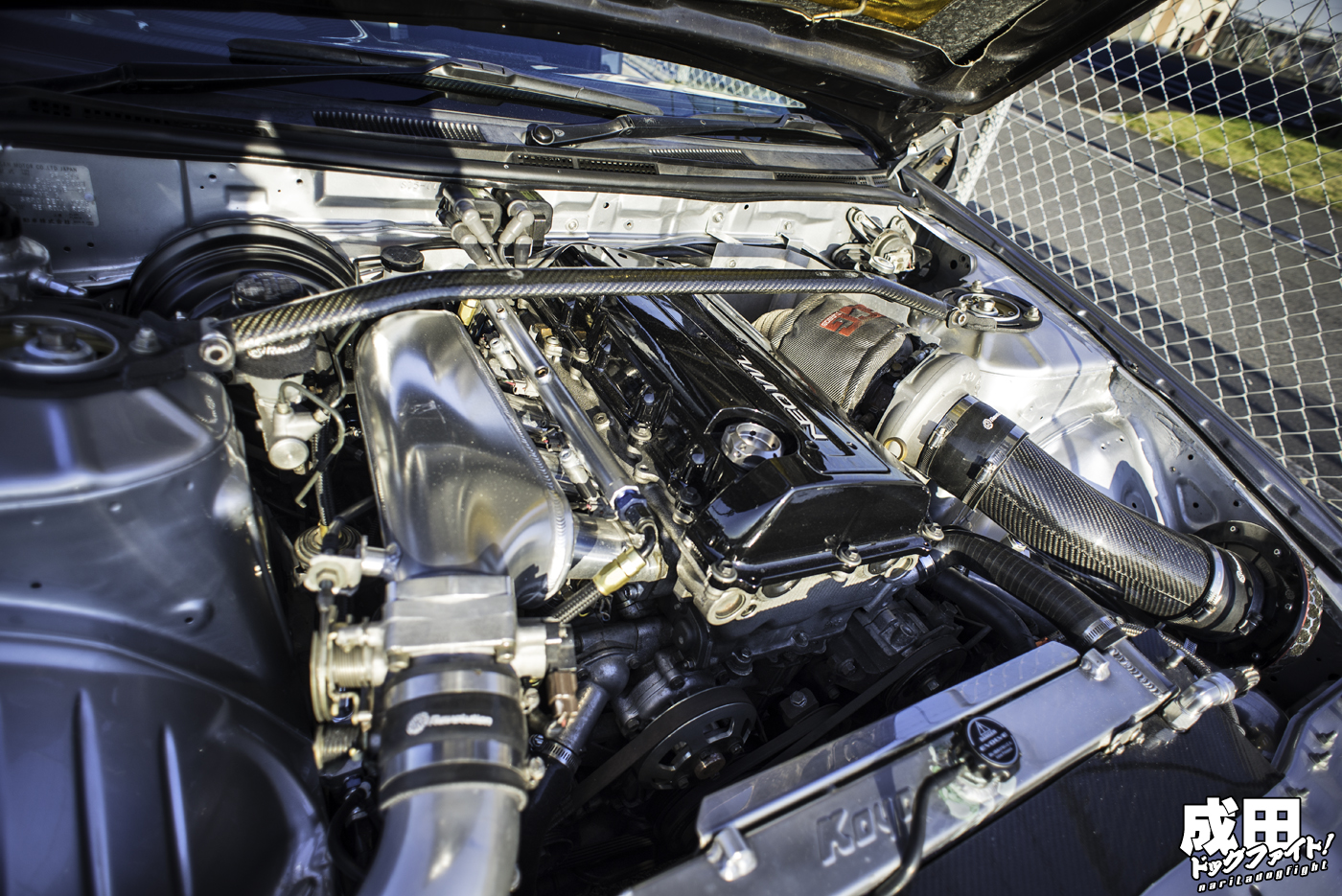 Which is somewhat necessary with the massive power output of the SR underneath the hood.  The engine, now equipped with a VE head, is powered mainly by the GCG GTX3582R turbine, which has been retrofitted to the VE head.  With boost at just about 2 bar, the power tips the scale at just over 730 horsepower.  The HKS 1,000cc injectors working double time to feed the engine enough fuel for the massive amount of boost.

The car has recently been equipped with a HKS 6-speed sequential gearbox! 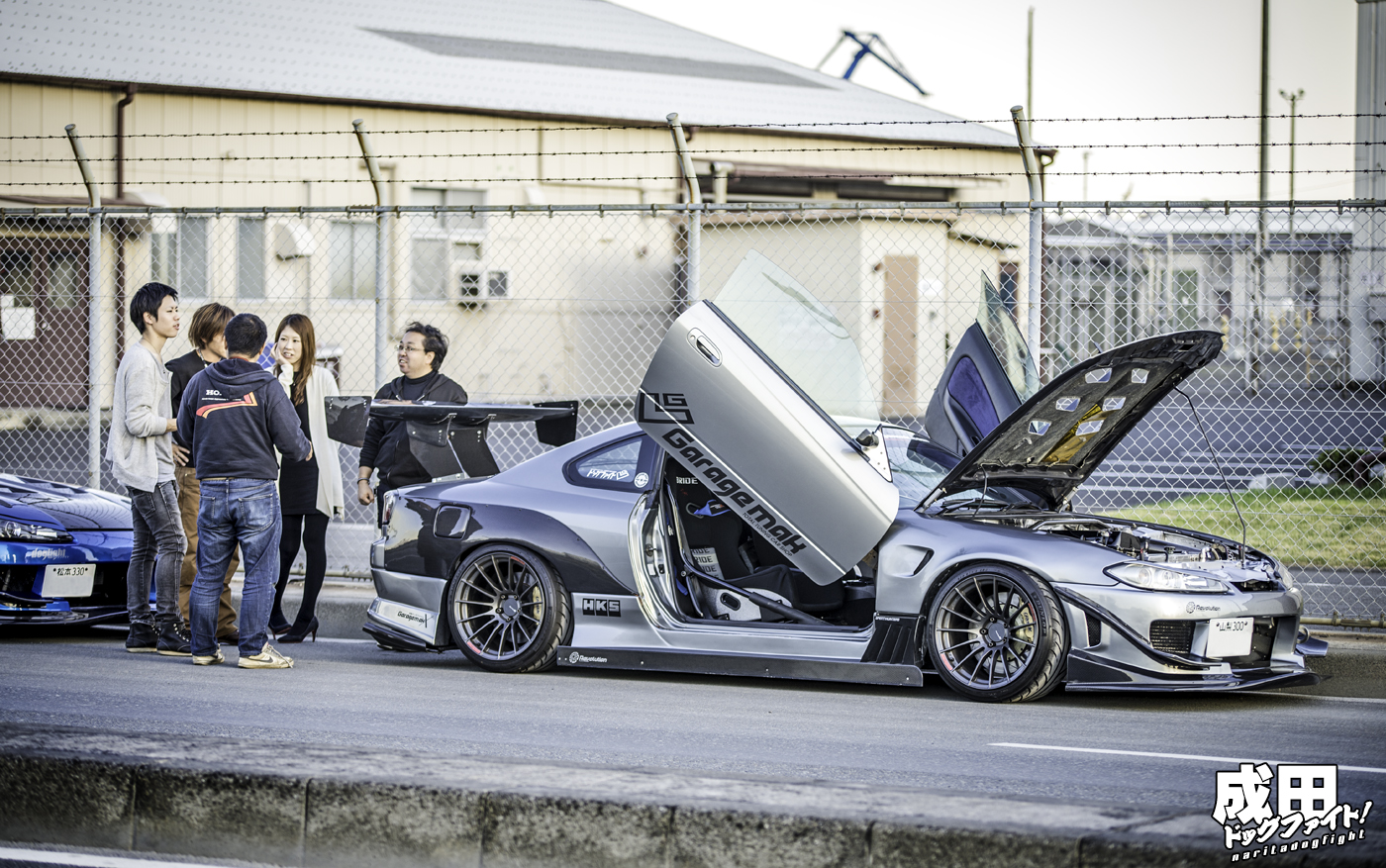 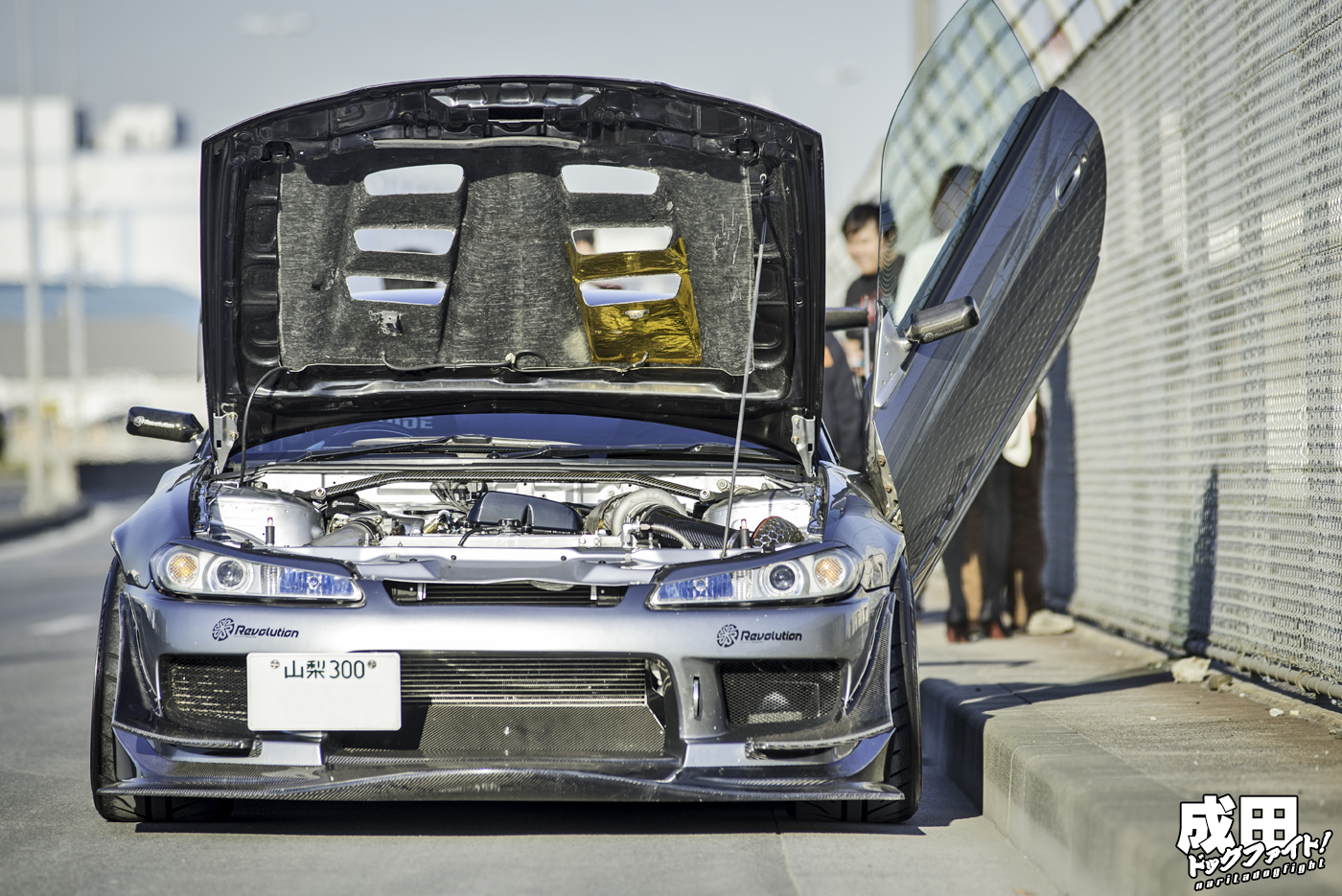 I know what my personal best victory lap around TC2000 would look like…door up. 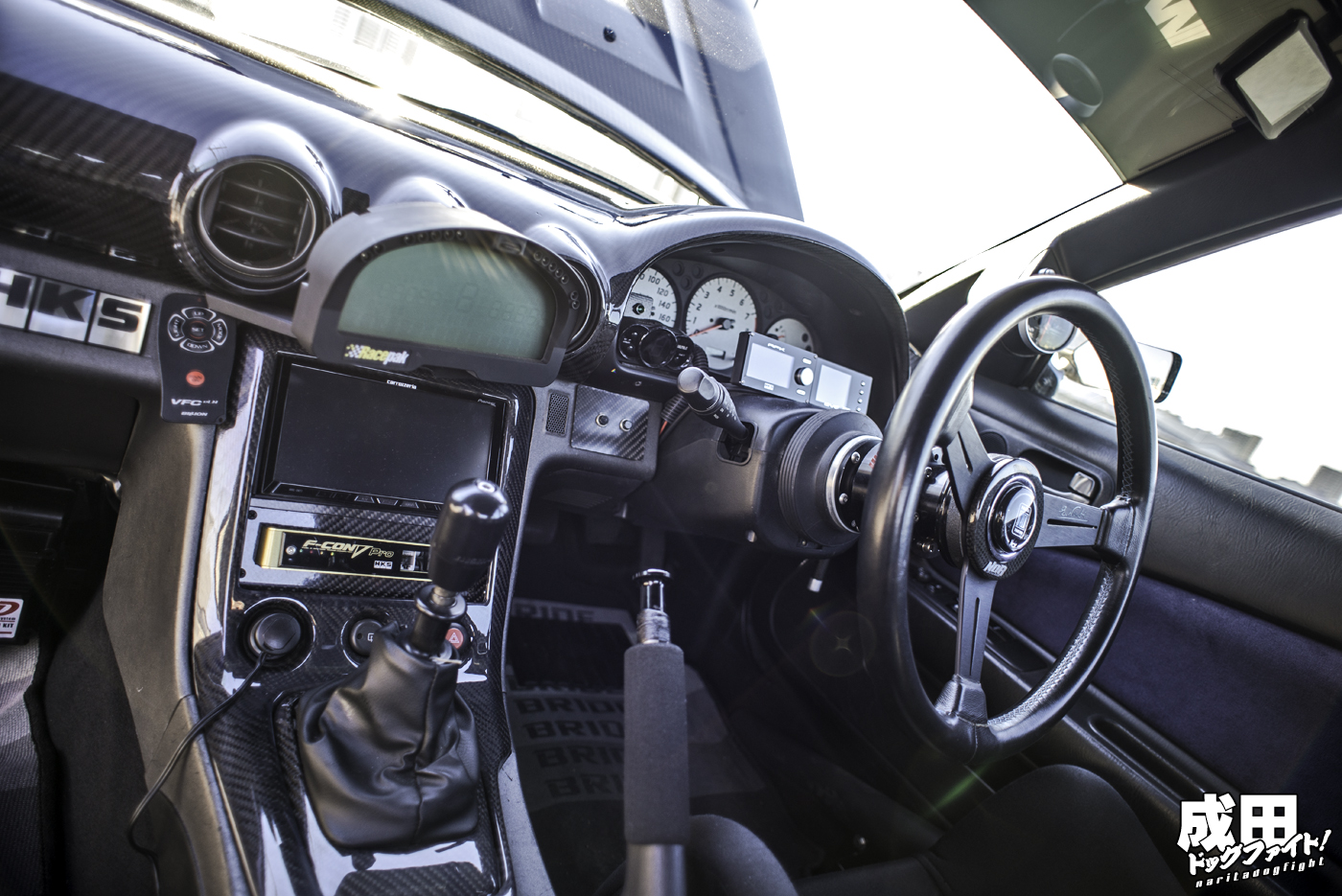 So, you’re probably wondering at this point why I still consider this car more of a street build, and like most cars, the answer can be found on the inside.  We typically look towards the ‘creature comforts’ when dictating the build of a car, and in this case they are all sustained.  Air Con, Stereo/ICE, all power everything, no roll bar, etc…despite the plethora of gauges and monitoring equipment, the car is still very much OEM (as OEM as a carbon dash can get). 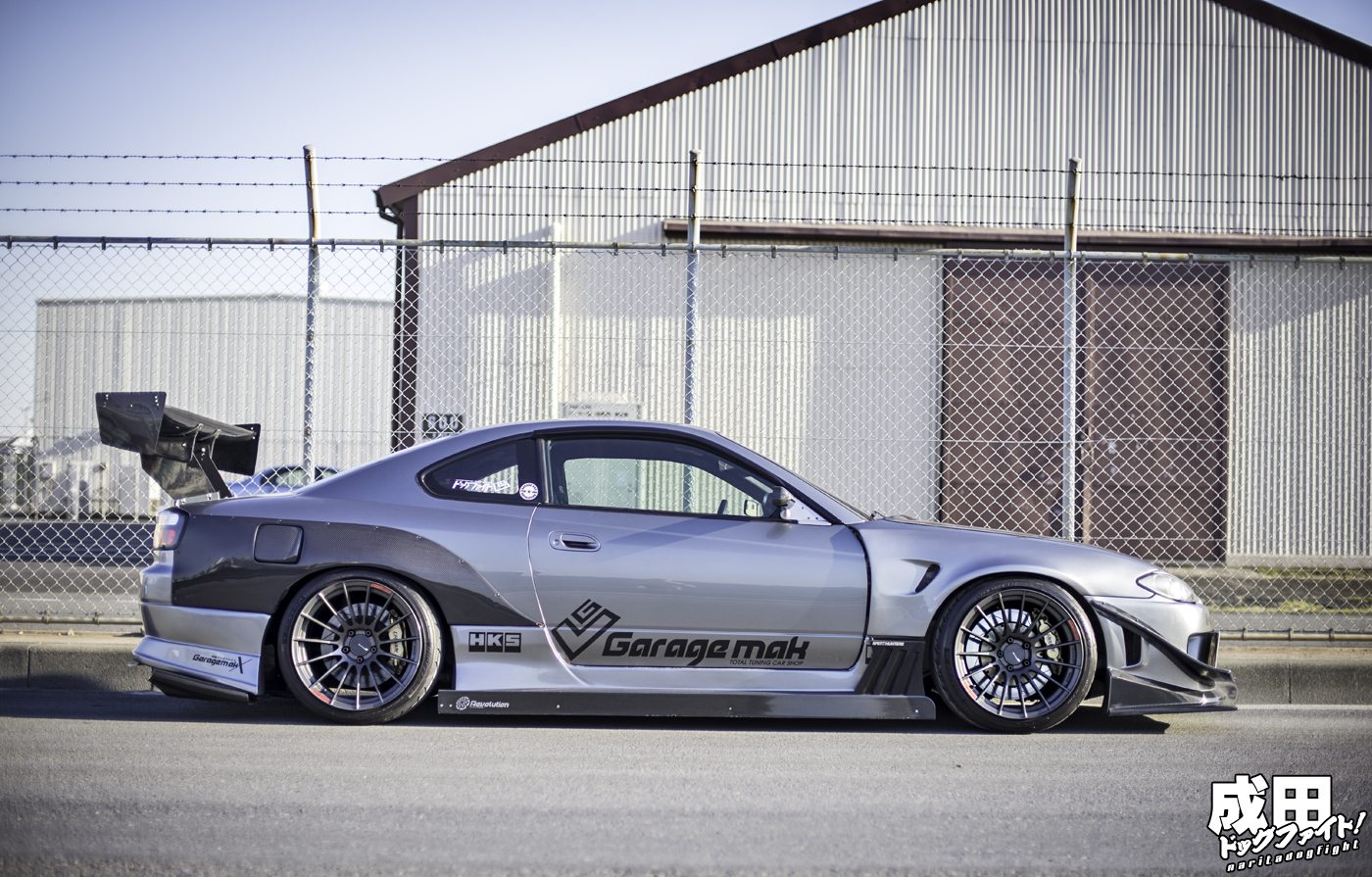 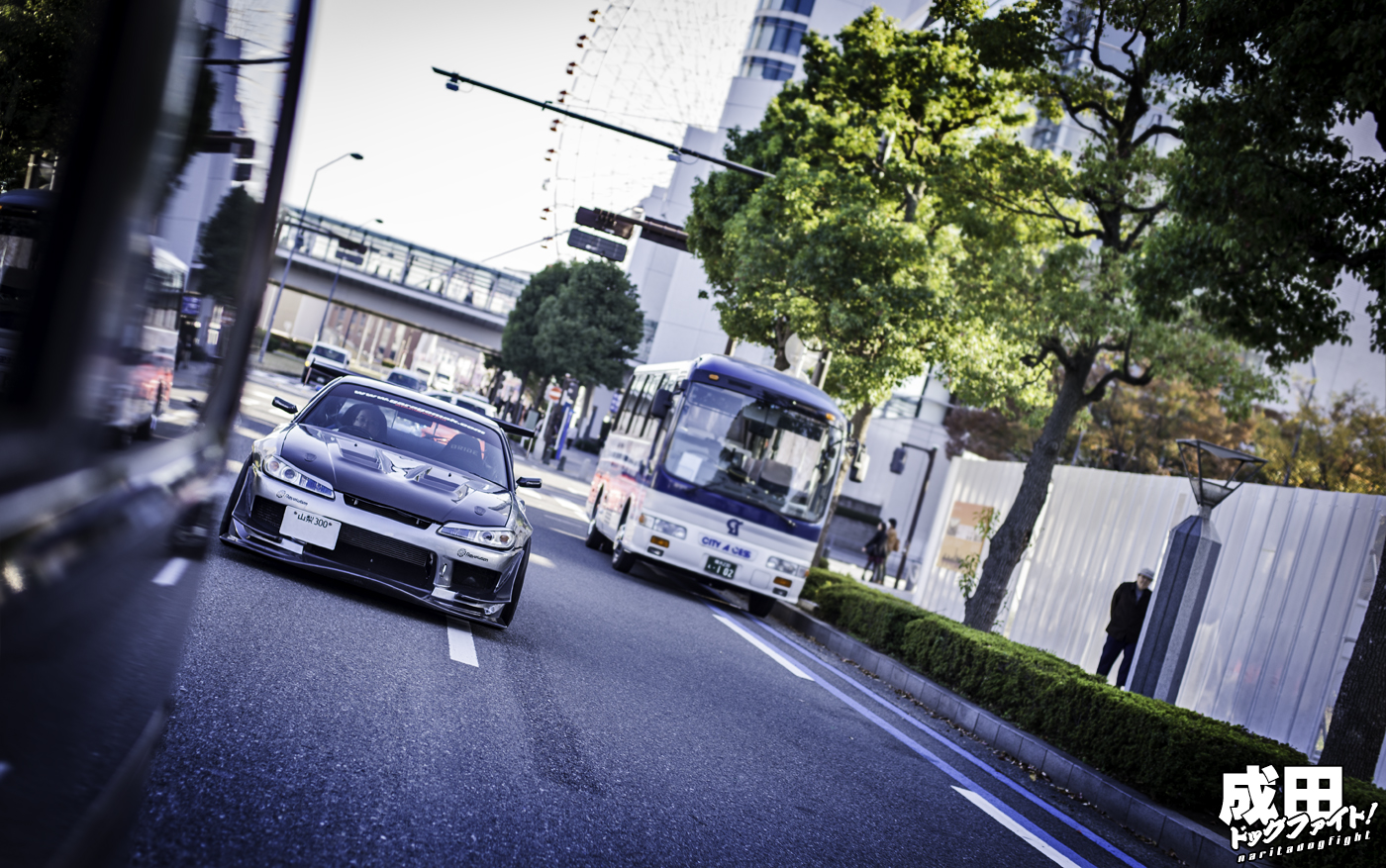 Doesn’t it look like it belongs on the street? 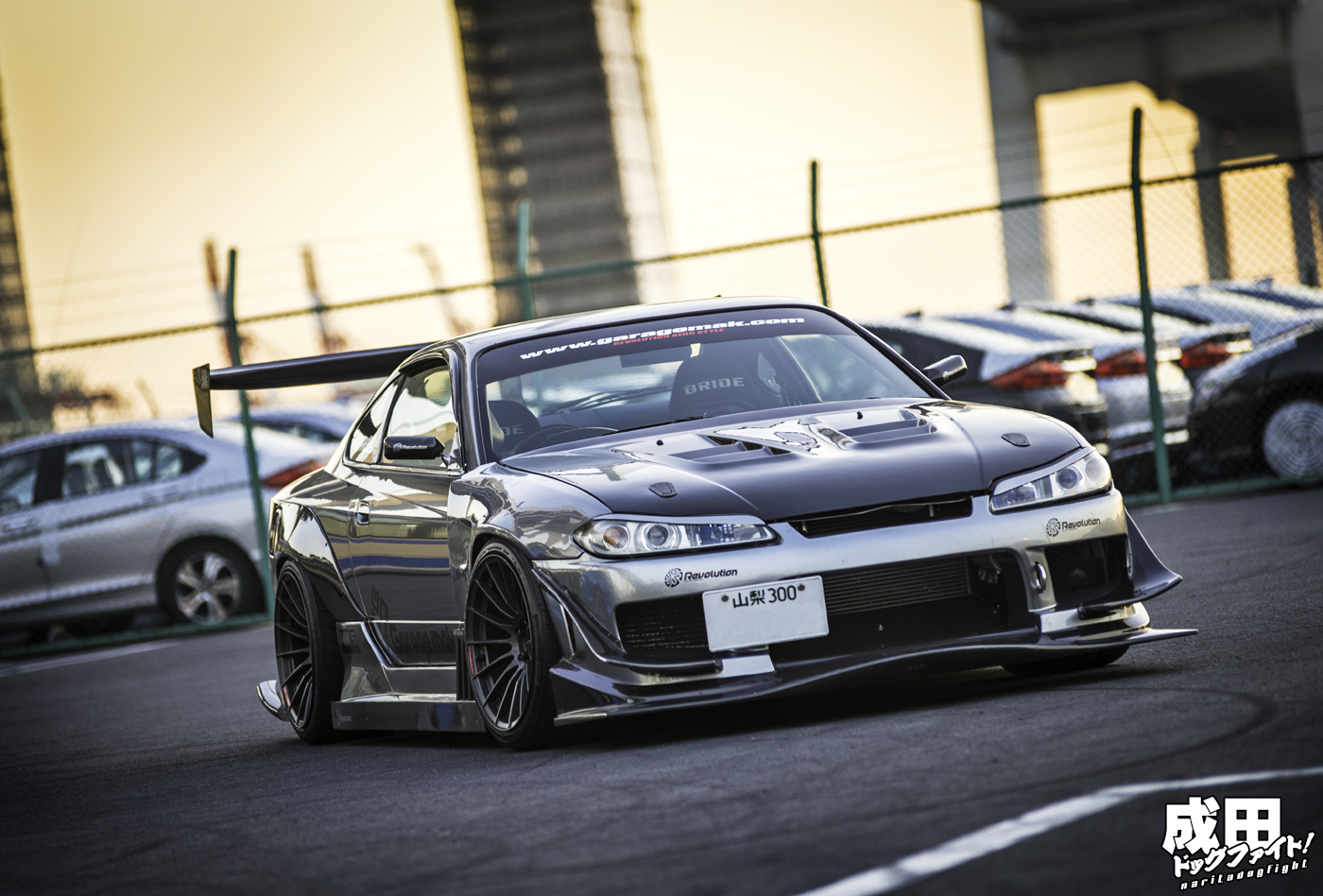 I am ecstatic that I was able to get the opportunity to not just see this car in person, but to get the privilege to shoot it as well.  I experienced the same thrill I did as a photographer as when I got to shoot Baki’s S15 for Import Tuner, except this time for my own website.  It really is a beautiful car, and testament to the work that Garage Mak does.  They are truly a ‘Total Car’ builder, and I will back that in every way.

Big thanks to Ame-san and everyone at Garage Mak for making the trip out to Yokohama.  I am glad, and proud, to call the folks at Garage Mak my good friends.