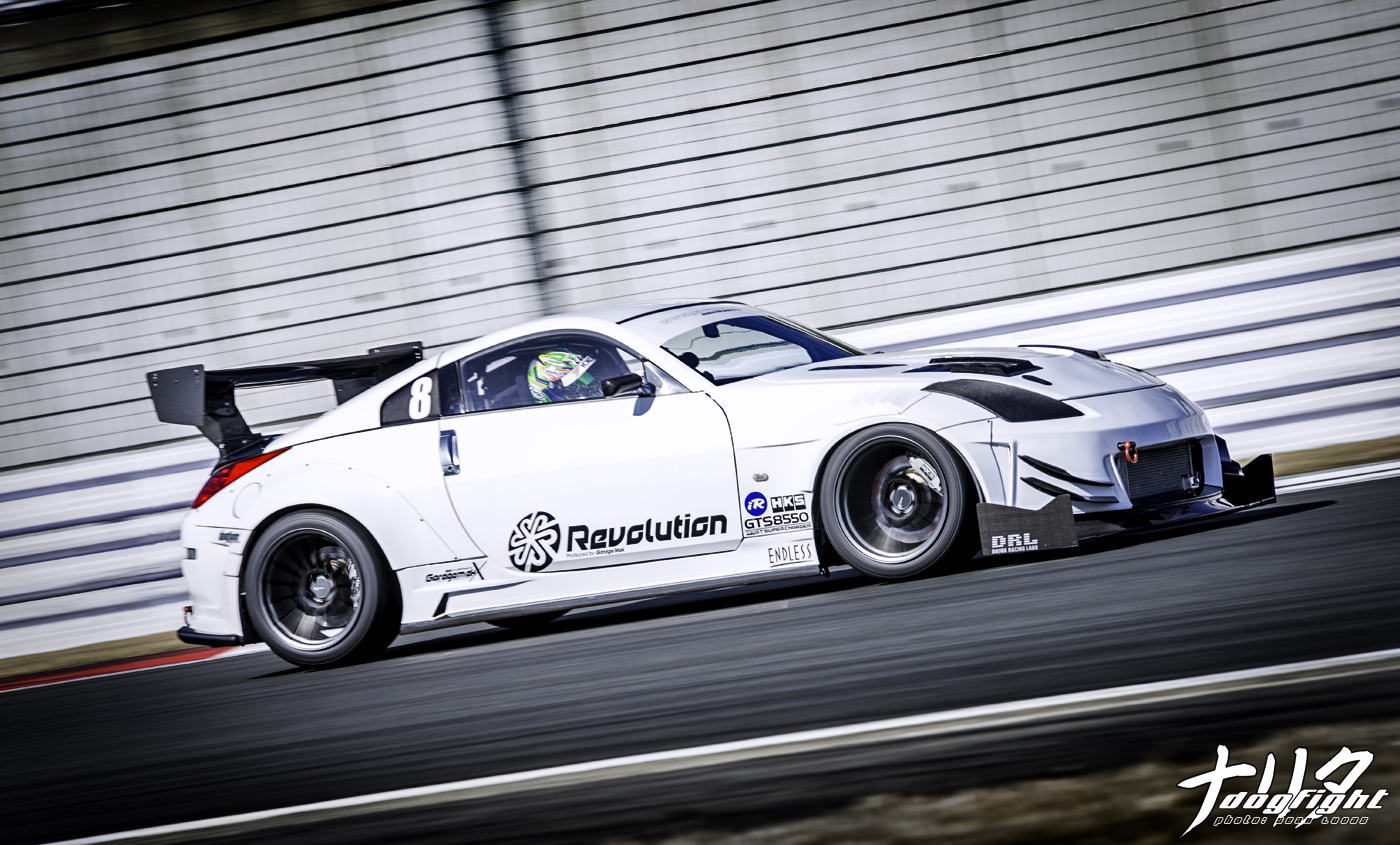 I wonder if it’s acceptable, in the off chance one falls victim to writer’s block, to type freely their thoughts?  I mean, this is a blog after all, and blogs are typically written in an informal or conversational style.  It would be difficult to keep it informational to the topic however, if I were to just start spouting off about a random thought.  In the case of the Garage Mak Z33, I could start typing about Nagano; the hometown of the shop.  Or perhaps about the Miyagawa brothers, the two creative powerhouses behind the brand.  I could always fall back to uncreatively (is that not a word?) listing off the modifications to the Z33.  To be honest though, I’m pretty sure I’ve covered all that basic stuff in prior articles – it seems redundant to keep typing it.  I could talk about how I was naked in a public bath again…does anyone even read this? 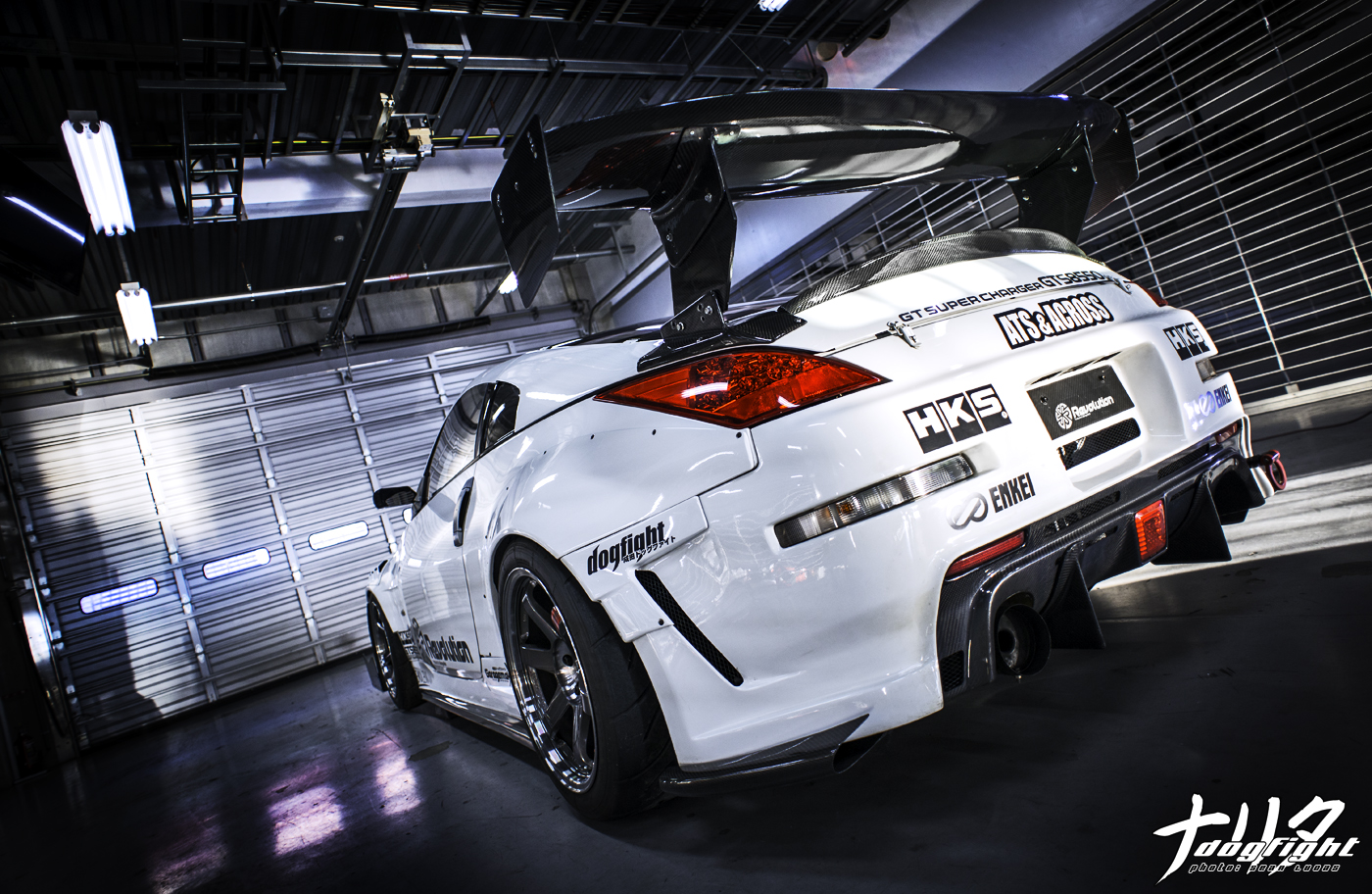 I think I’ll pass on all that stuff, and because I am suffering from what one may call writer’s block, I think I’ll just talk about my day spent with this car, and the Garage Mak team at HKS Premium Day last weekend. 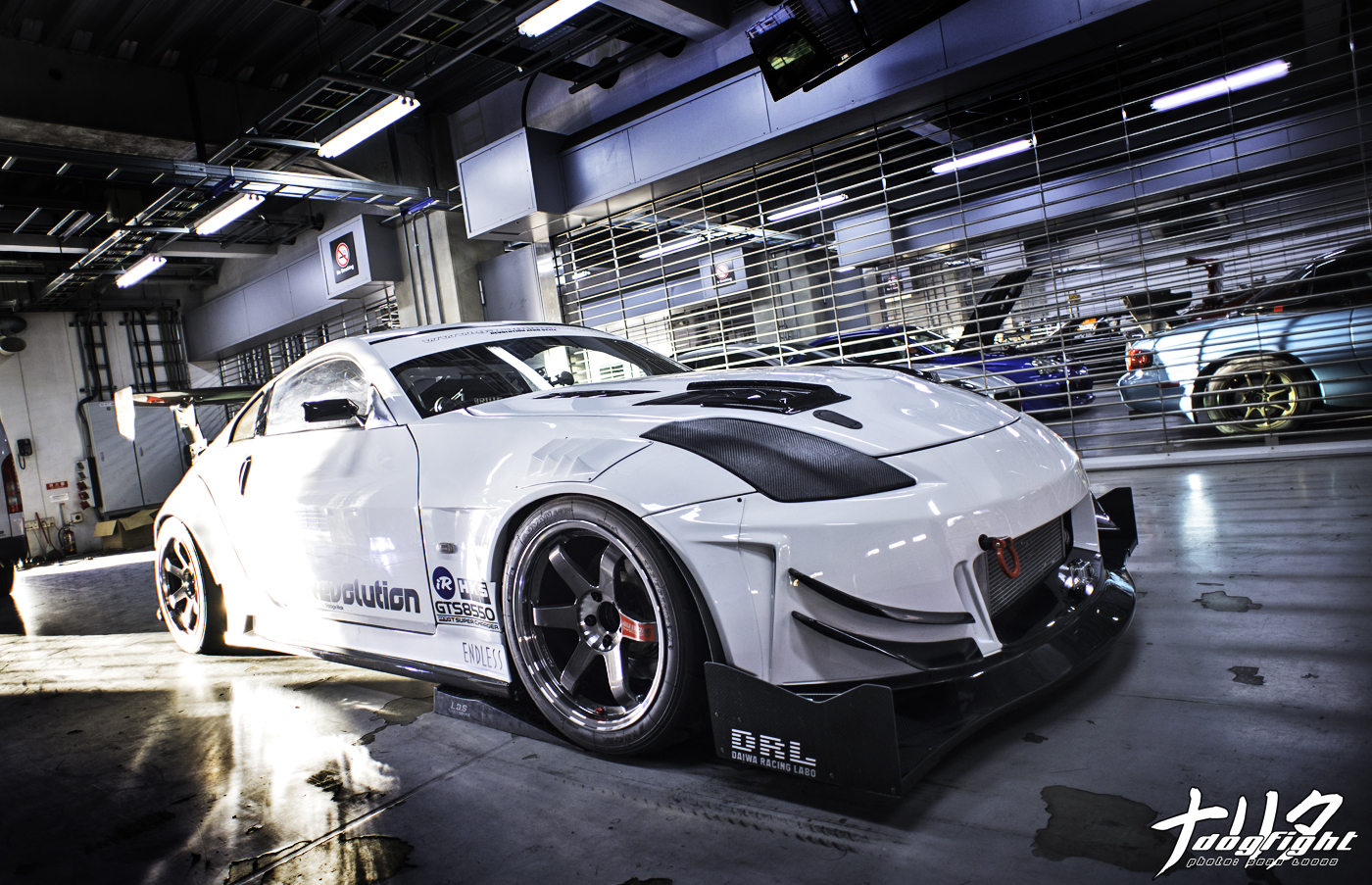 I got a message from Baki a couple days before the event, alerting me to the recent heavy snowfall in Nagano, and how he was concerned about him and Ame not being able to make it out to Fuji.  The Z33 wouldn’t have issues as it was being trailored, but he was going to make the 3.5 hour drive in his S15.  That news put me out of sorts, as I was really looking forward to seeing them again.  Good news came the day I left LA though, the snow had ceased and melted off enough for them to escape Nagano. 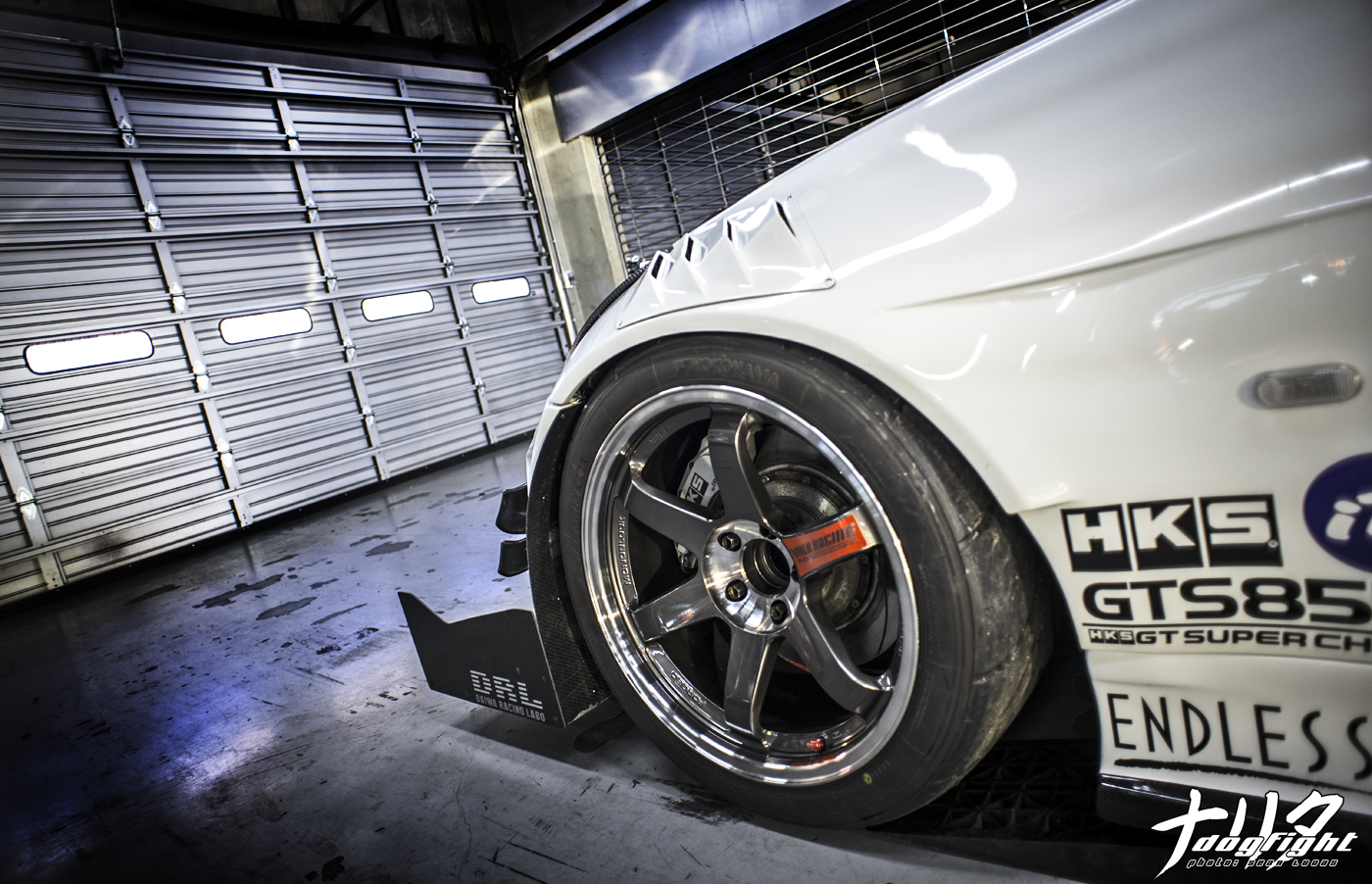 So, good!  The whole team made it.  Kazunori, Tatsuhiro, Baki, Ame, Seki, and a good handful of mutual friends from Nagano were all able to come out to enjoy the event, and cheer on Orido as he drove the car’s flagship Z33 around Fuji – and drive it he did!  The fastest lap of the day for the Z came across at 1’48.820 – a large improvement over last years time of 1’50.122.  Largely in part a tweak in the enging tuning, and also some minor aerodynamic changes and weight savings. 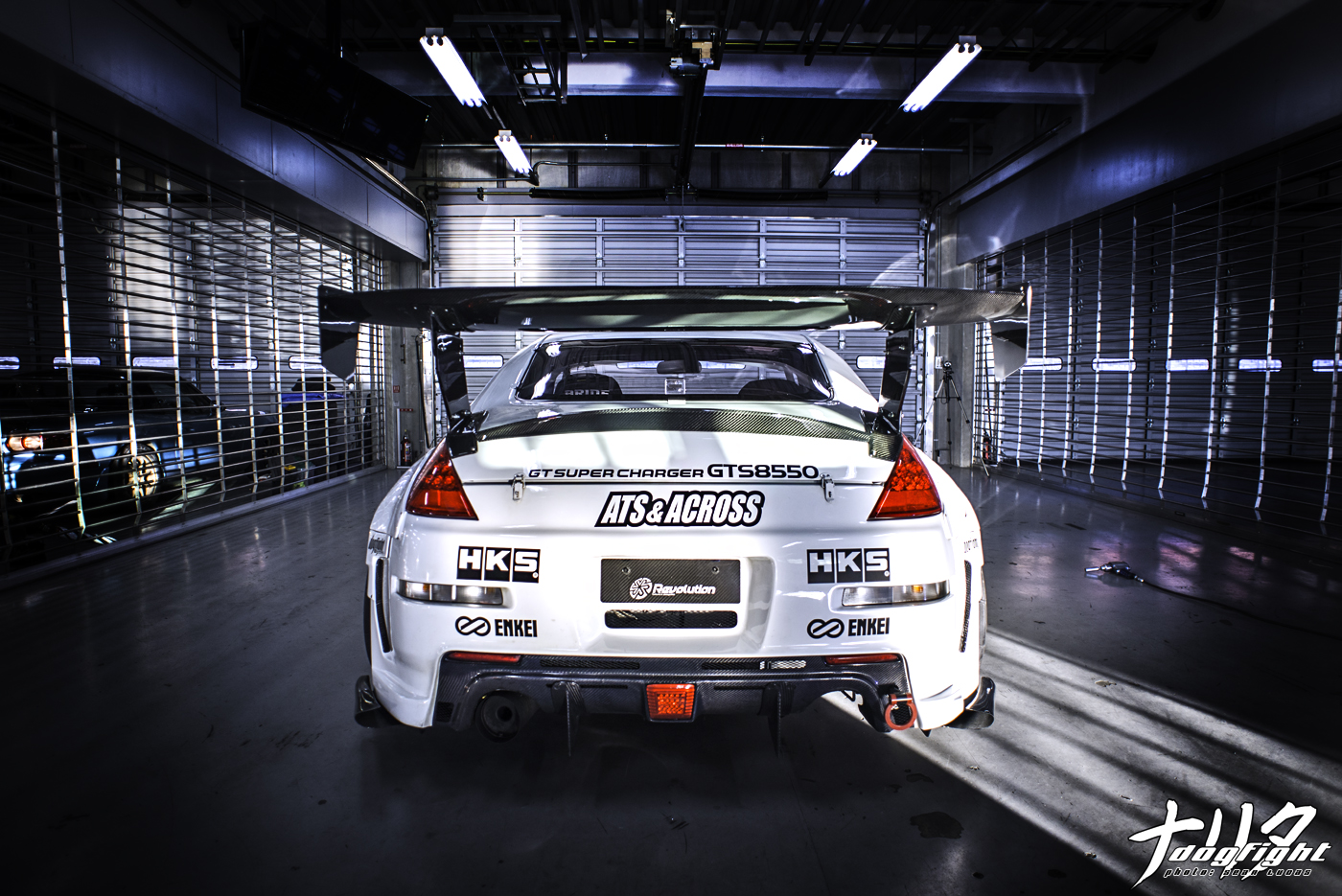 Running the newly developed Type 2 hood, they were able to confirm a large improvement in water temp control.  The Type 2 offers a very stable surface performance as well as improved cooling effects.  They’re actually accepting orders for it already both in carbon and FRP. 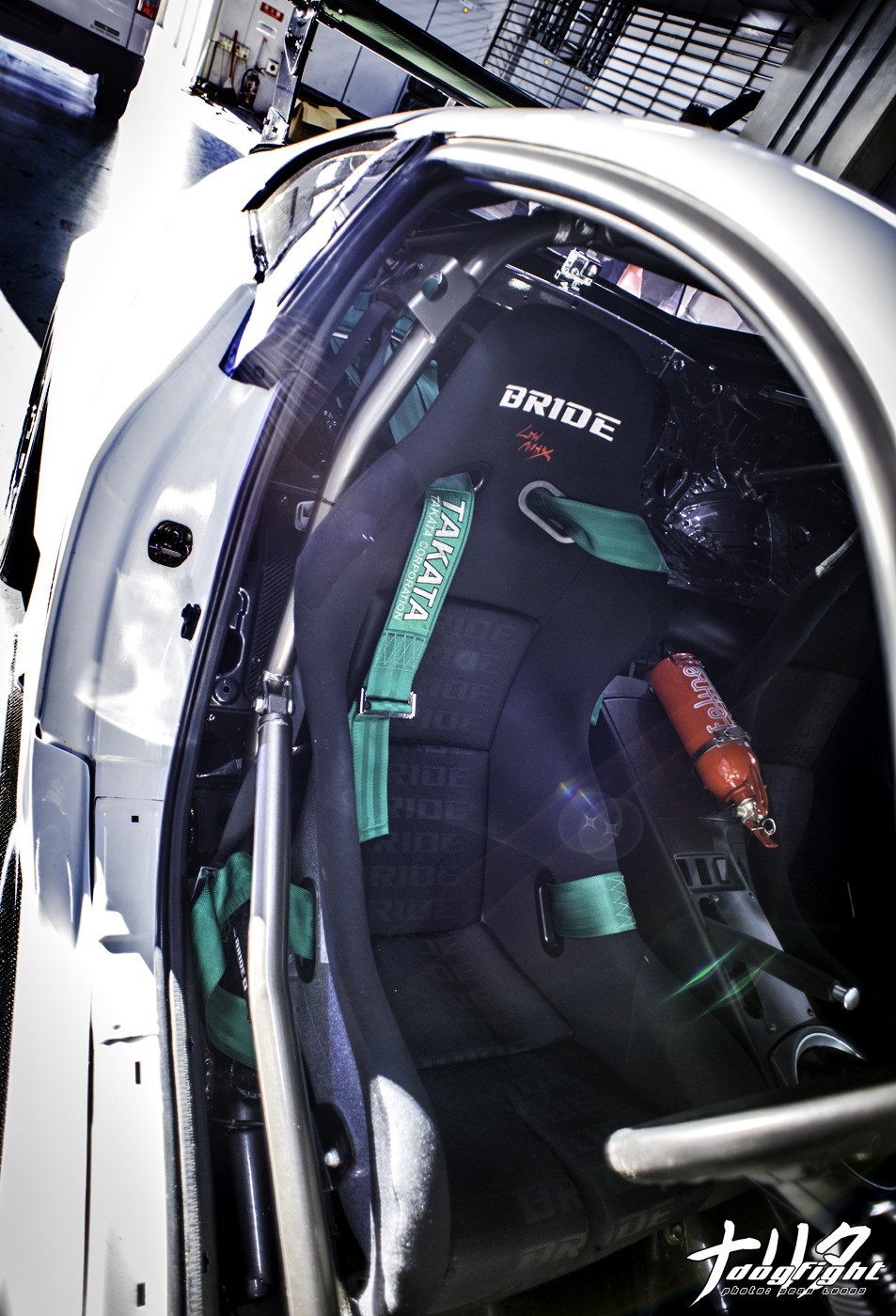 A Bride Low Max and a couple of Takata straps, hold Orido into position as he zips around the track. 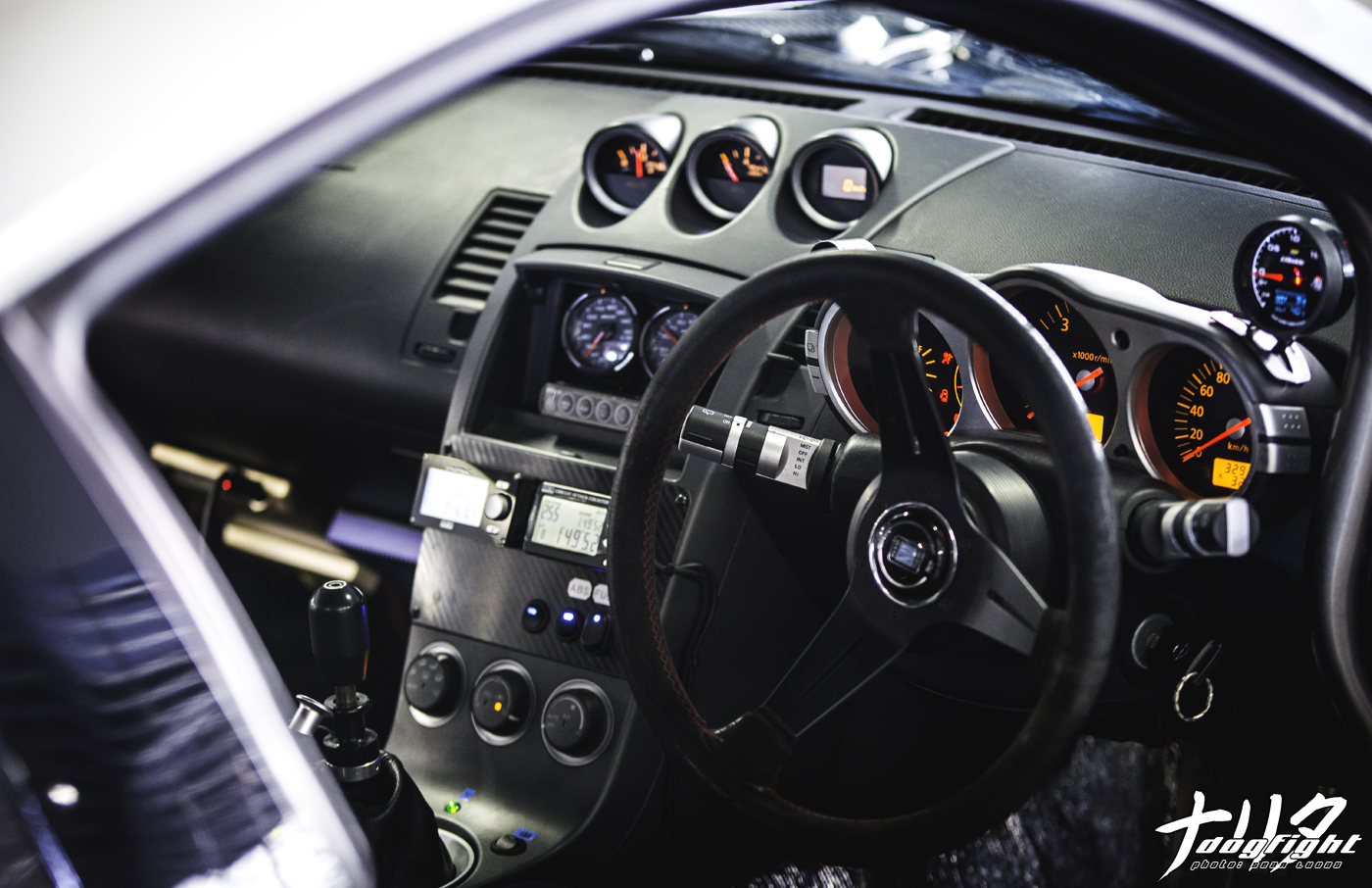 Monitoring the car’s vitals on a variety of gauges.  Note the HKS Circuit Attack Timer – a must for any attack car in Japan.

I’m not sure if I like it better on the TE37 SL’s or on the Enkei’s it ran last year…The TE’s were used for track their first time out, but were changed to the Enkei’s on the second outing. 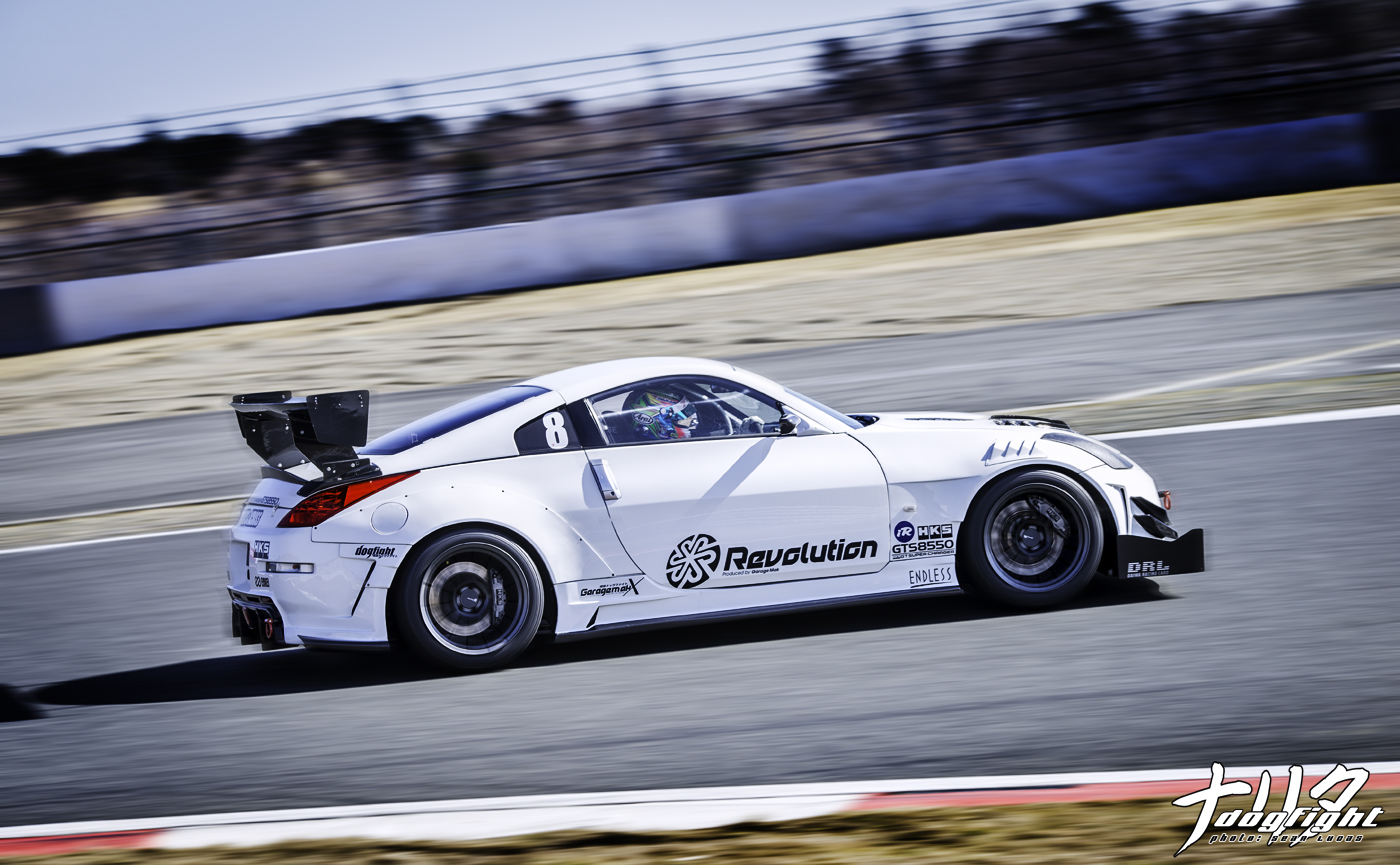 The Z was looking as good as ever with the new aero additions up front. 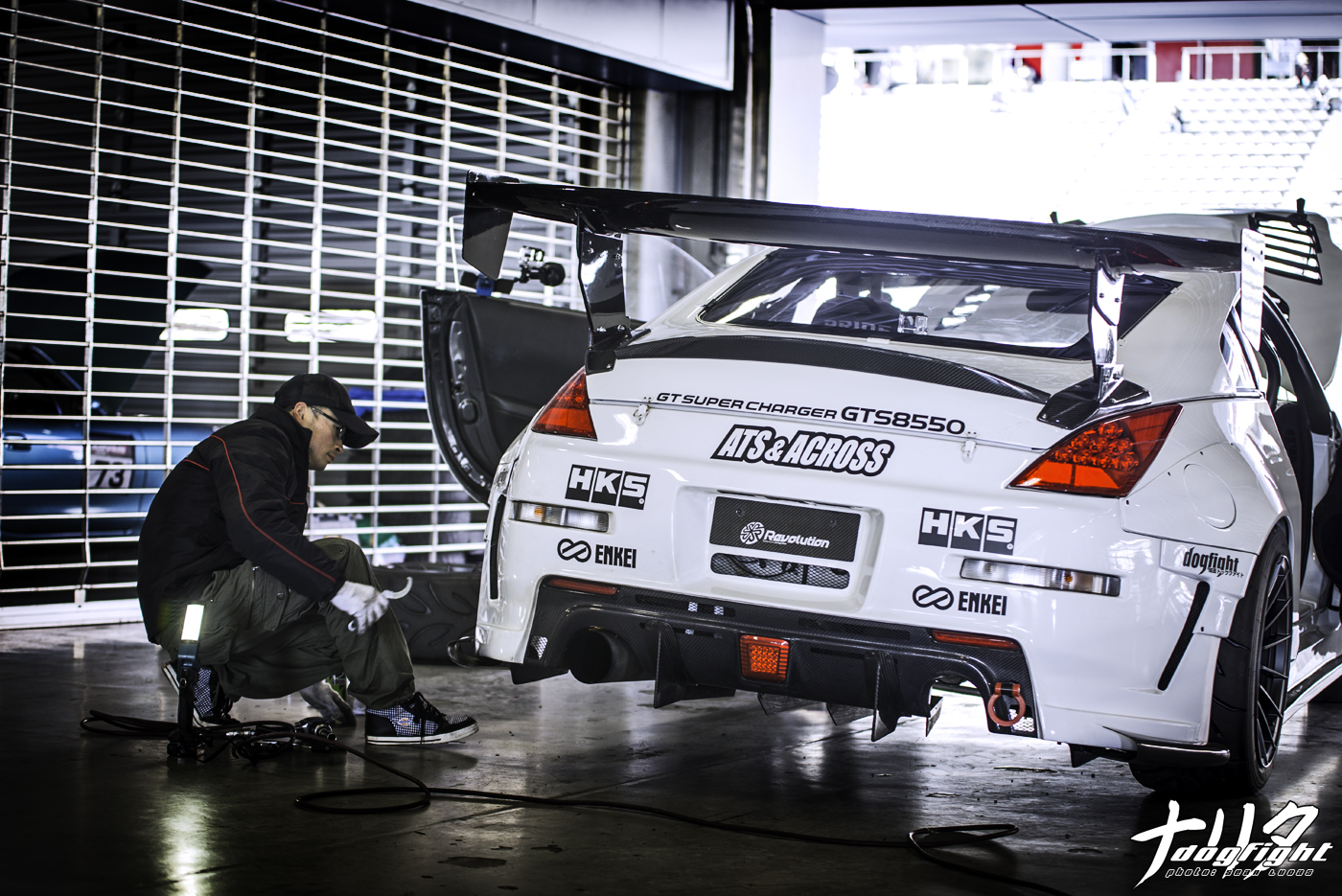 …and back out again to set the personal best. 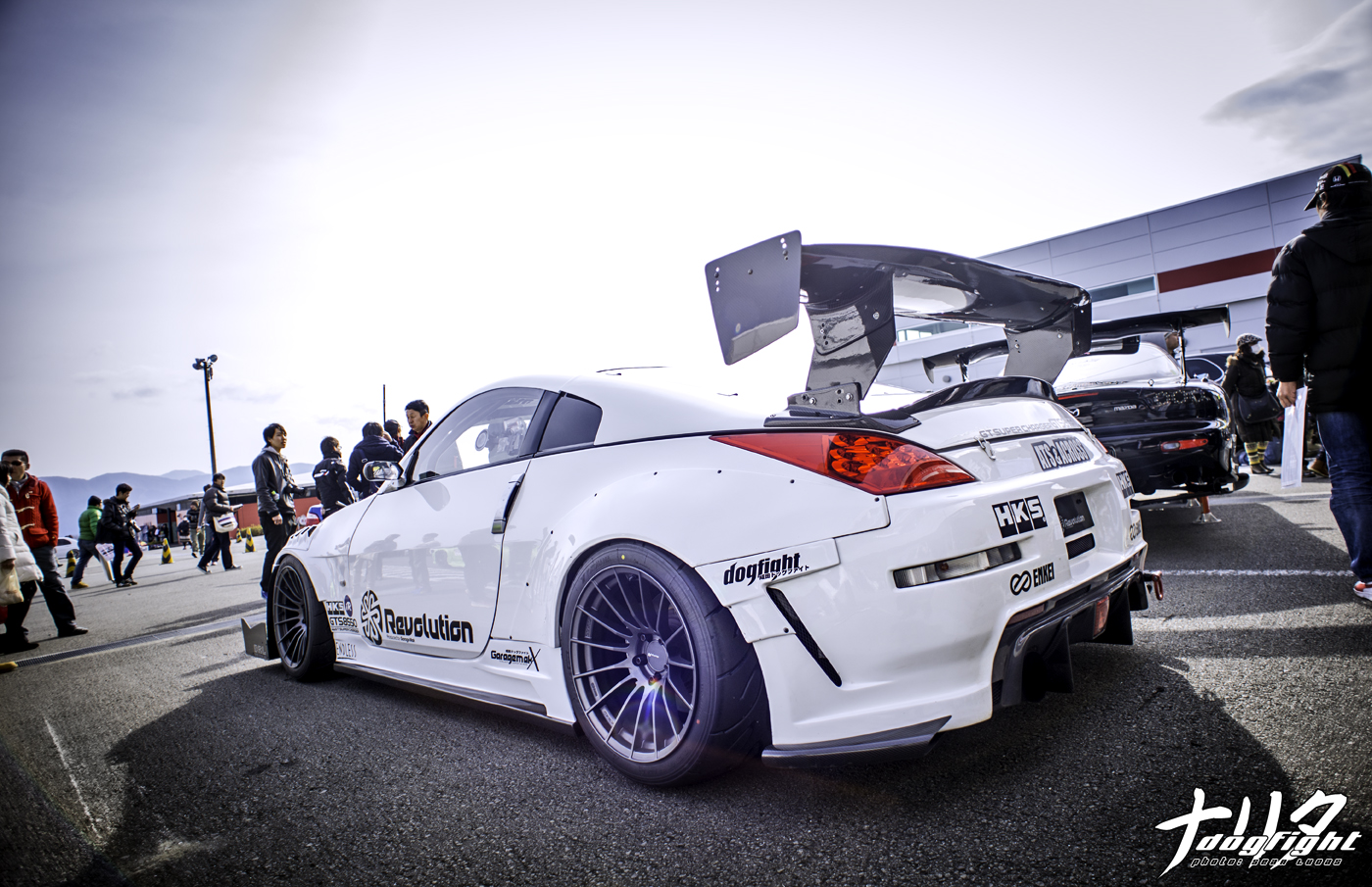 All in all a great day for the team!

And while all that jazz was happening out on circuit, Baki, Ame and Seki were holding down the fort in front of the Garage Mak booth in the paddock.  Actually, Ame was only there for a little bit of the day – he got trapped over on the other side of the track at the car show thing…man was that bad. 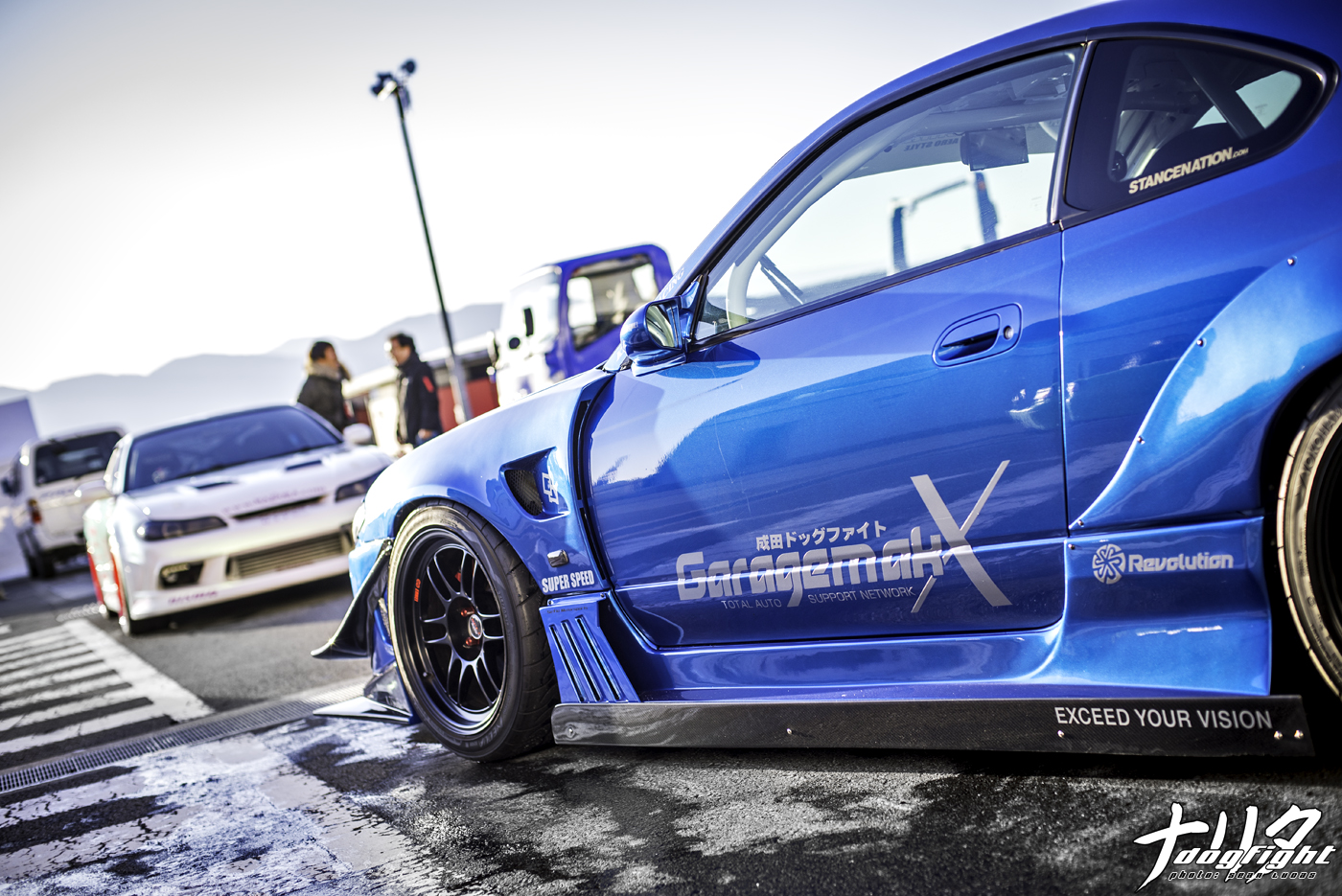 I was able to grab a few shots of them together in the morning though. 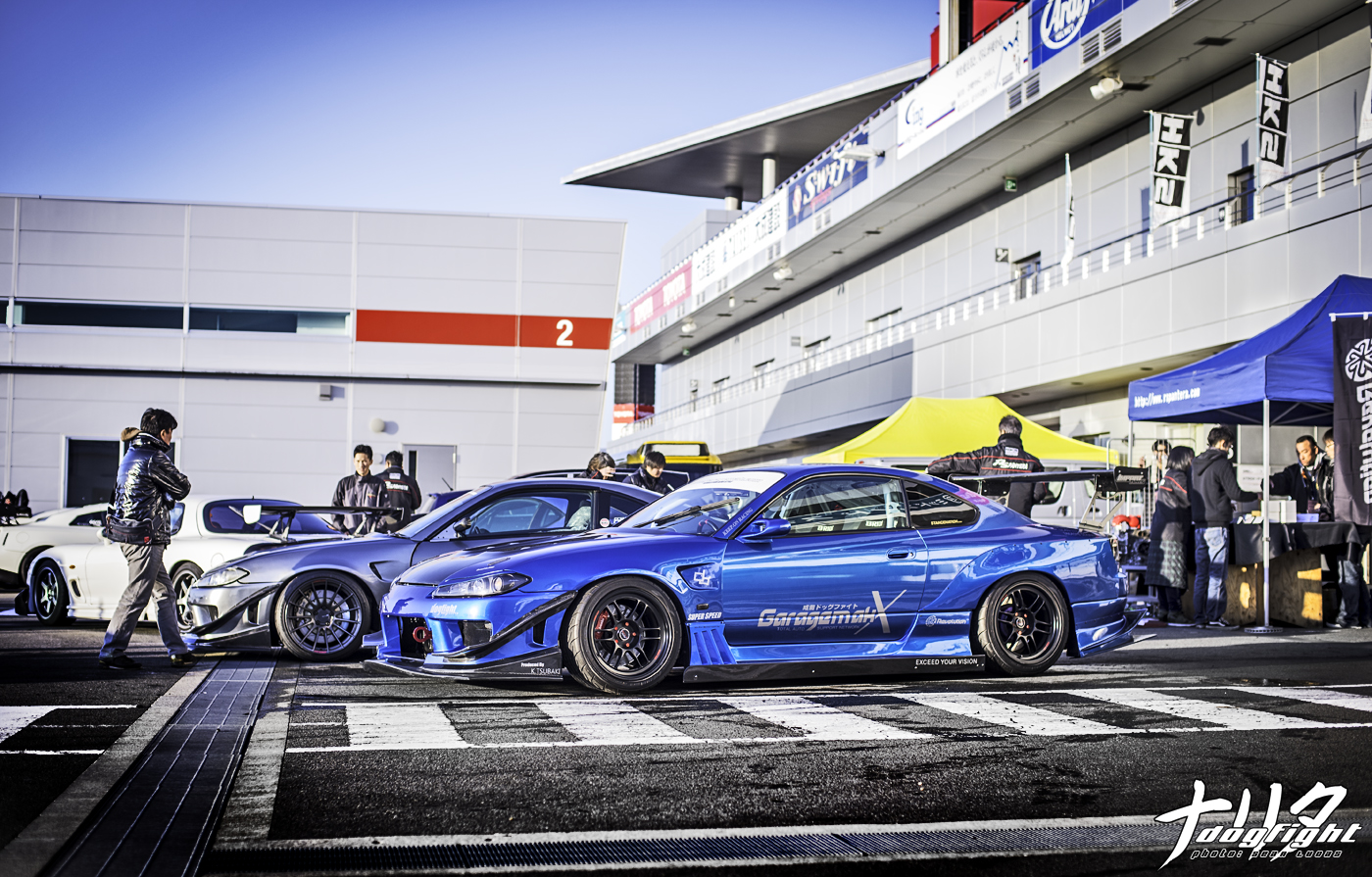 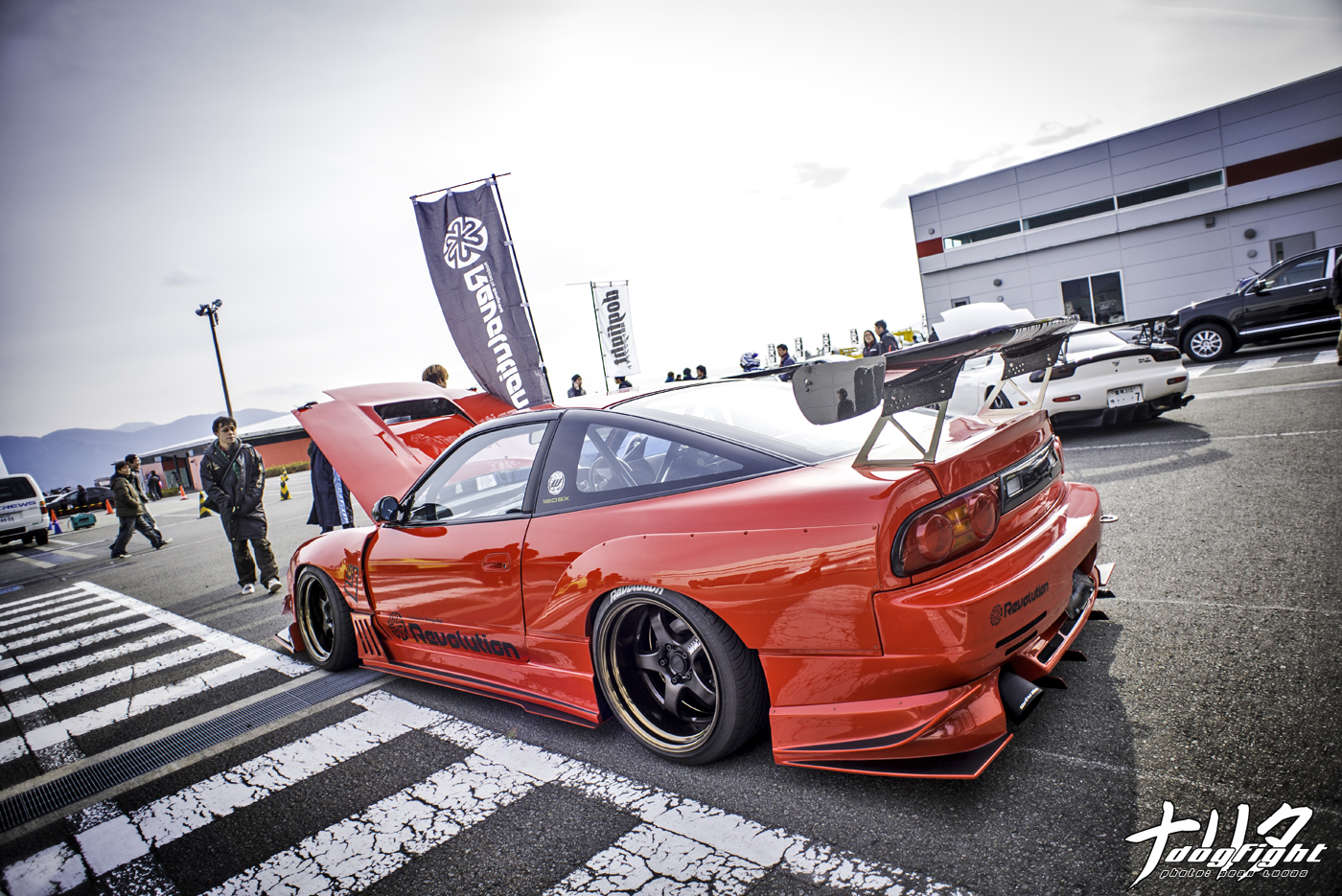 Seki ended up towing his car out from Nagano, not wanting to risk any damage from the snow…his car is a bit lower than the others and has some one-off aero on it.  So Minori-chan sat shotgun in the truck cab with Seki as they comfortably drove to Fuji, ensuring the 240 arrived damage free. 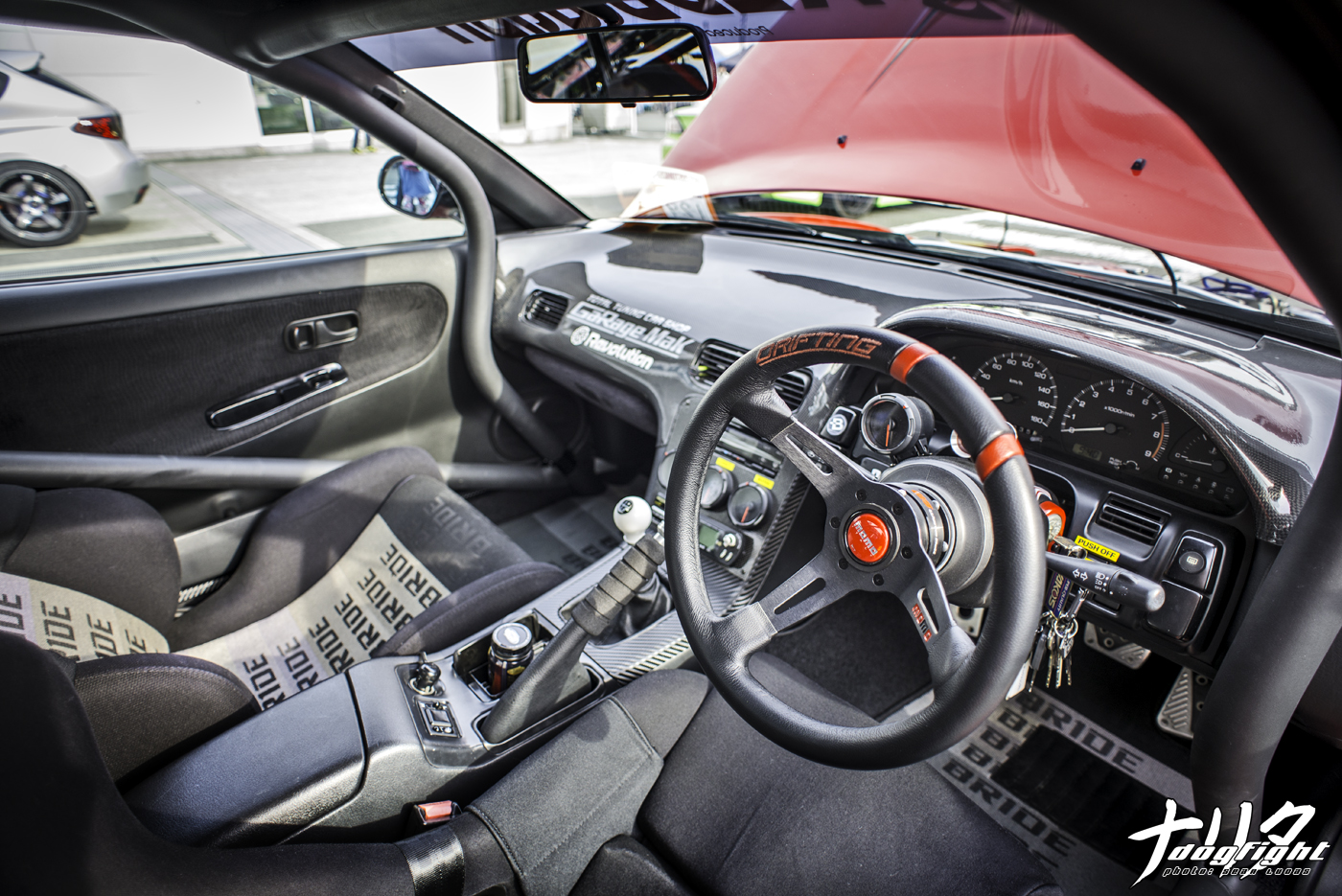 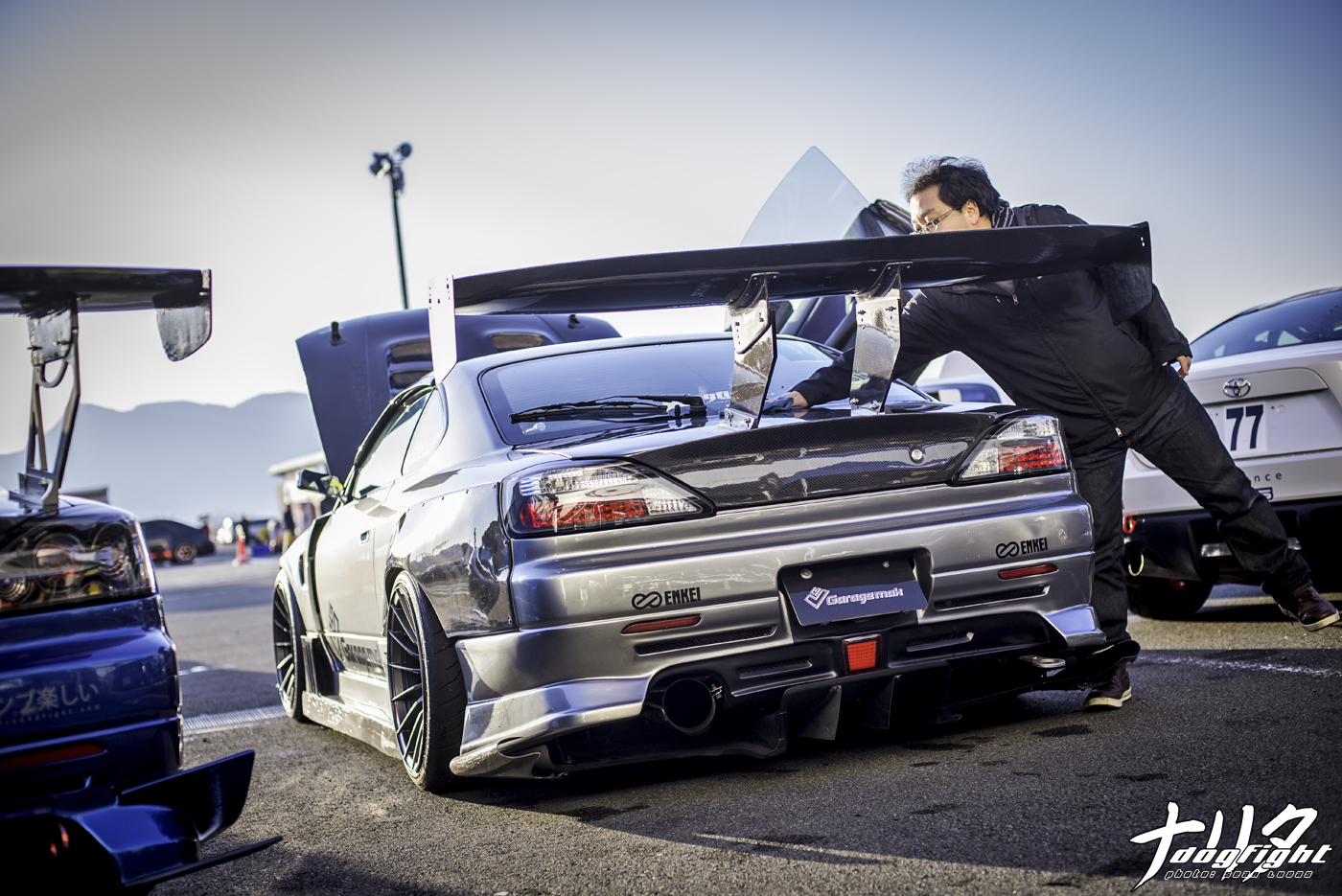 The only shot I got of Ame’s S15!!  Maybe I got one at the car show…I can’t remember.  Anyway, it was looking good as always.  Super glad everything worked out OK and they were all able to make it down to Shizuoka and back safely.  It was definitely a long day for all of them, but a day that was well worthwhile.