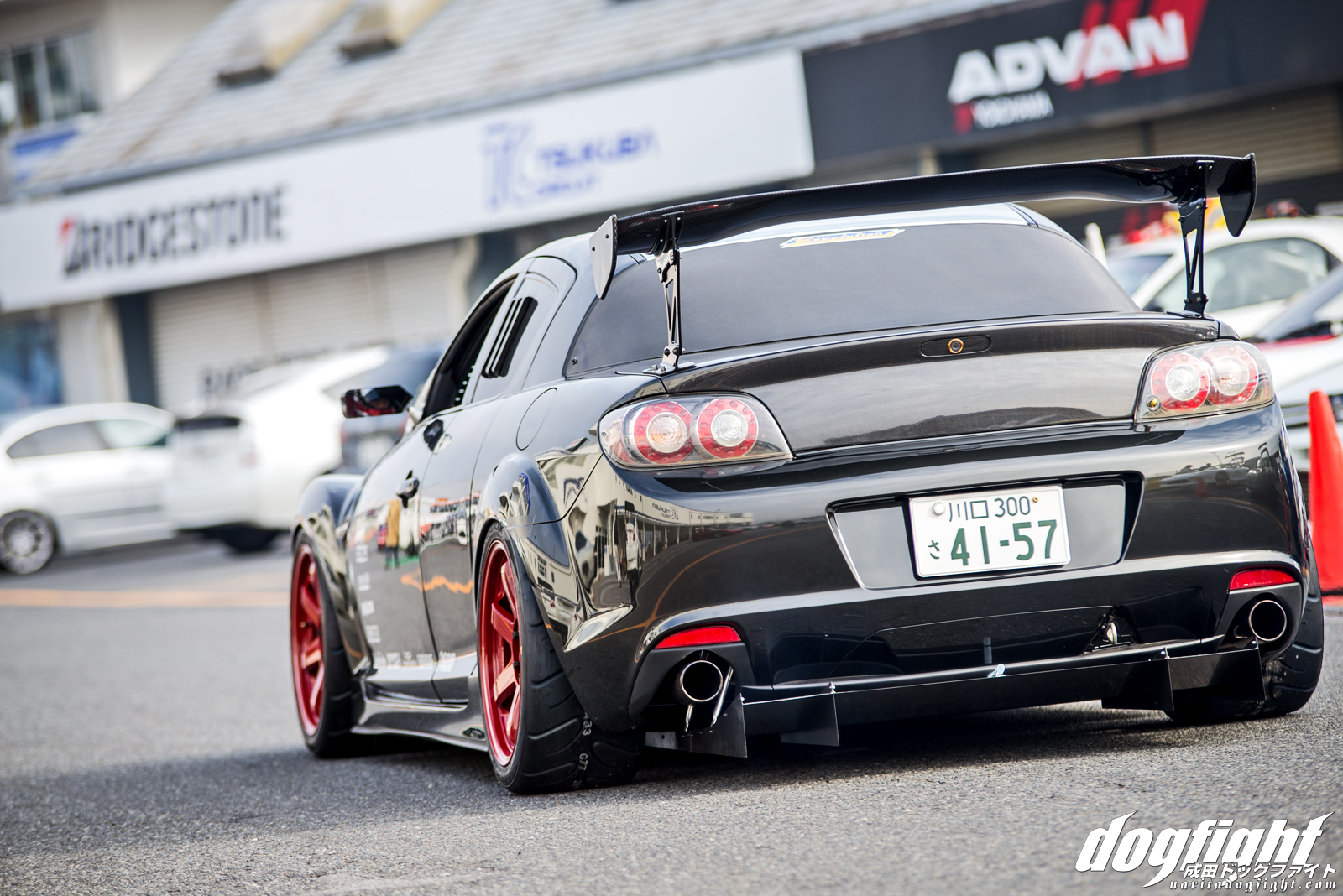 With the seemingly never-ending popularity of Mazda’s 90’s classic, the RX7, it’s not uncommon for it’s successor, the RX-8, to get overlooked.  At the time, the newly introduced Renesis engine, while a great performer at high RPM, lacked torque and overall power; mainly due to the extreme efficiency of the engine to meet strictly enforced emissions laws.  Because of this, the naturally aspirated 1.3 liter rotary seemed to always get passed on for it’s older, turbocharged counterpart.  Wanting to prove the RX-8’s worth, and to help stoke parts development of the chassis, Aoki-san at Revolution took on the task of building the ultimate RX-8.  The first step?  Ditching the Renesis motor for a naturally aspirated 20B.

Now, this car is no stranger to the circuit.  It is, however, not technically Revolution’s demo car anymore.  The car itself was completed by Revolution in 2011 and was immediately recognized by many outlets as an amazing build.  Sometime around the end of 2014 though, Revolution put the car up for sale and it has since been sold to a third party.  You’ll be pleased to hear though, that the car is still being put to use for it’s intended purpose.  At both January and February Battle Evome events, the new owner was present and pushing the refreshed car to it’s limits. 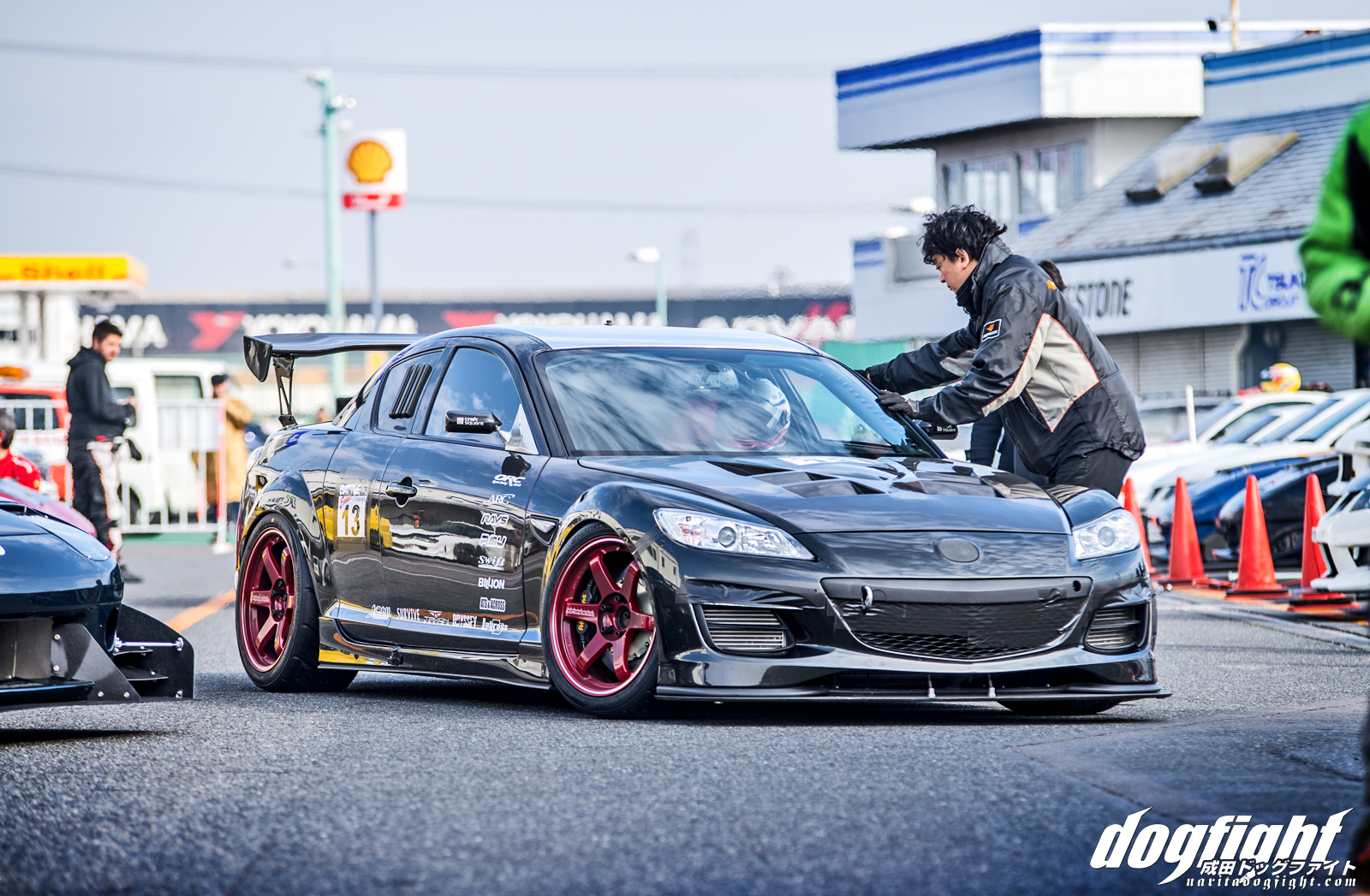 Compared to some of the cars at Evome, the RX-8 takes a more mild approach to aero tuning.  No wild canard and splitter setup here.  Instead, the OE front bumper is equipped with just a carbon splitter to aid in downforce.  The car itself does look quite sporty in it’s own right.  A set of Craft Square mirrors replace the chunky OE counterparts, and a carbon GT wing helps keep the rear planted in corners.  A small selection of parts goes a long way in this case. 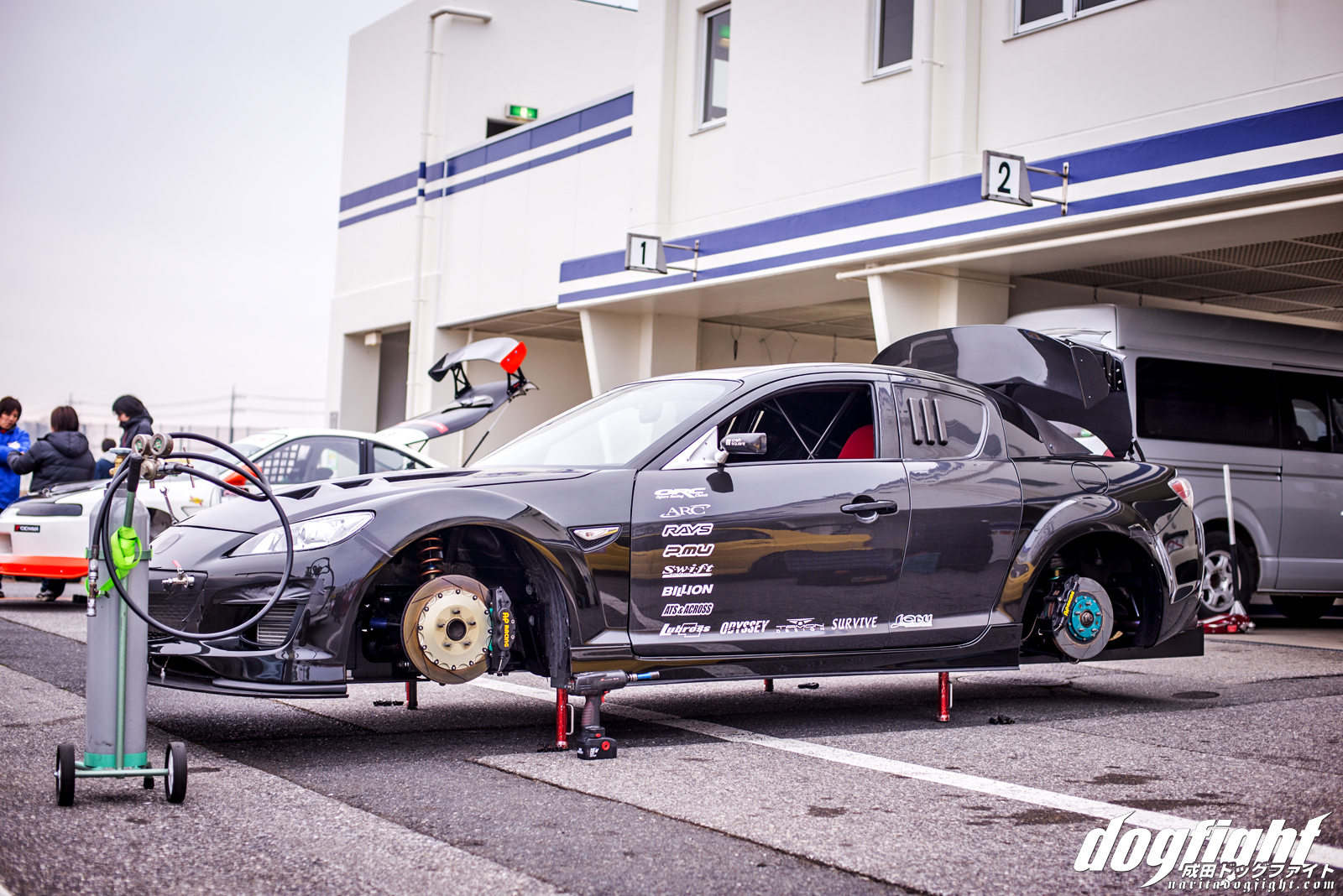 Fabricating reinforcement for the chassis, Aoki and his crew added a custom roll cage, and incorporated air jacks in the design as well. 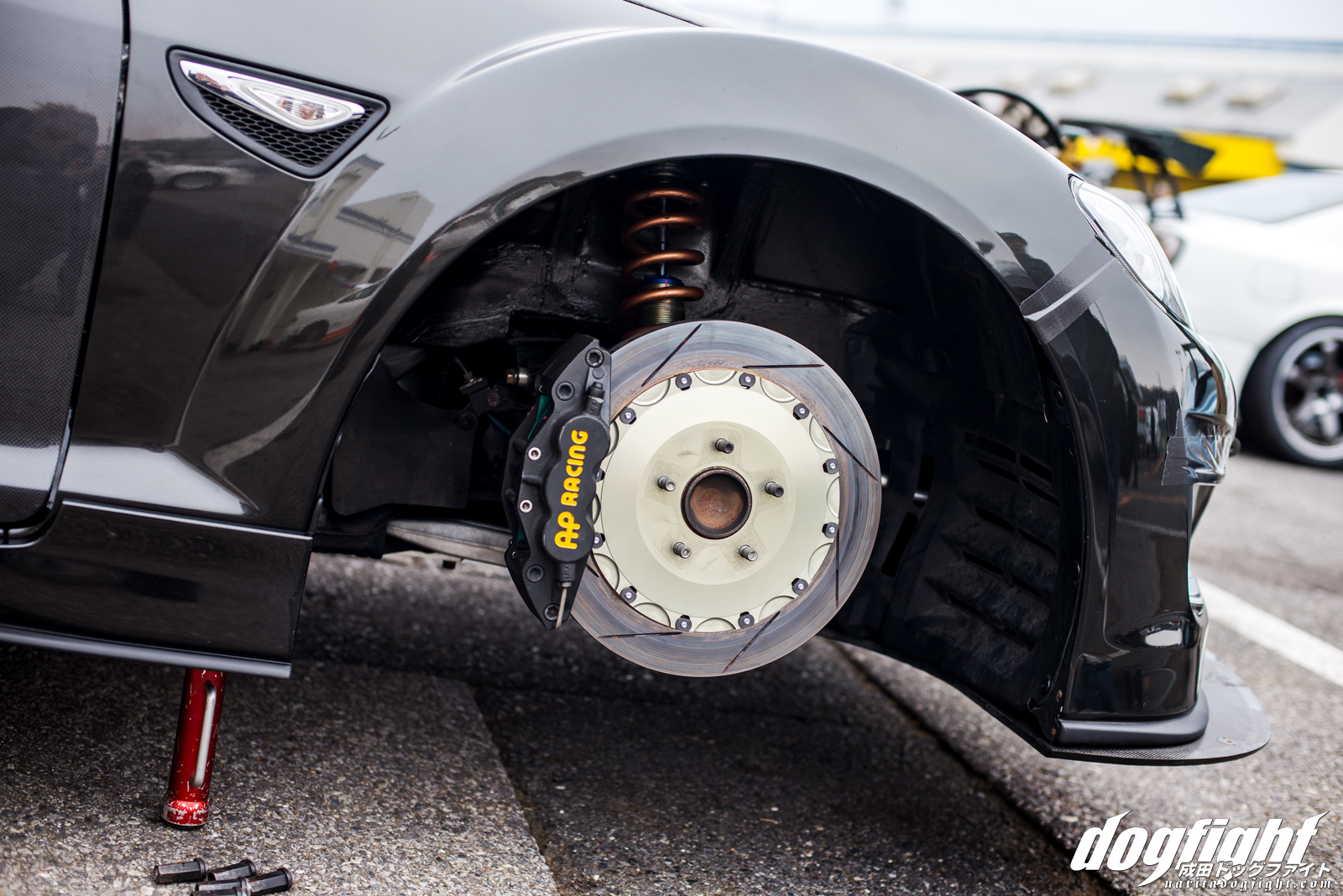 AP Racing calipers reside at all four corners, and Project Mu pads and rotors provide the friction needed to slow the car down. 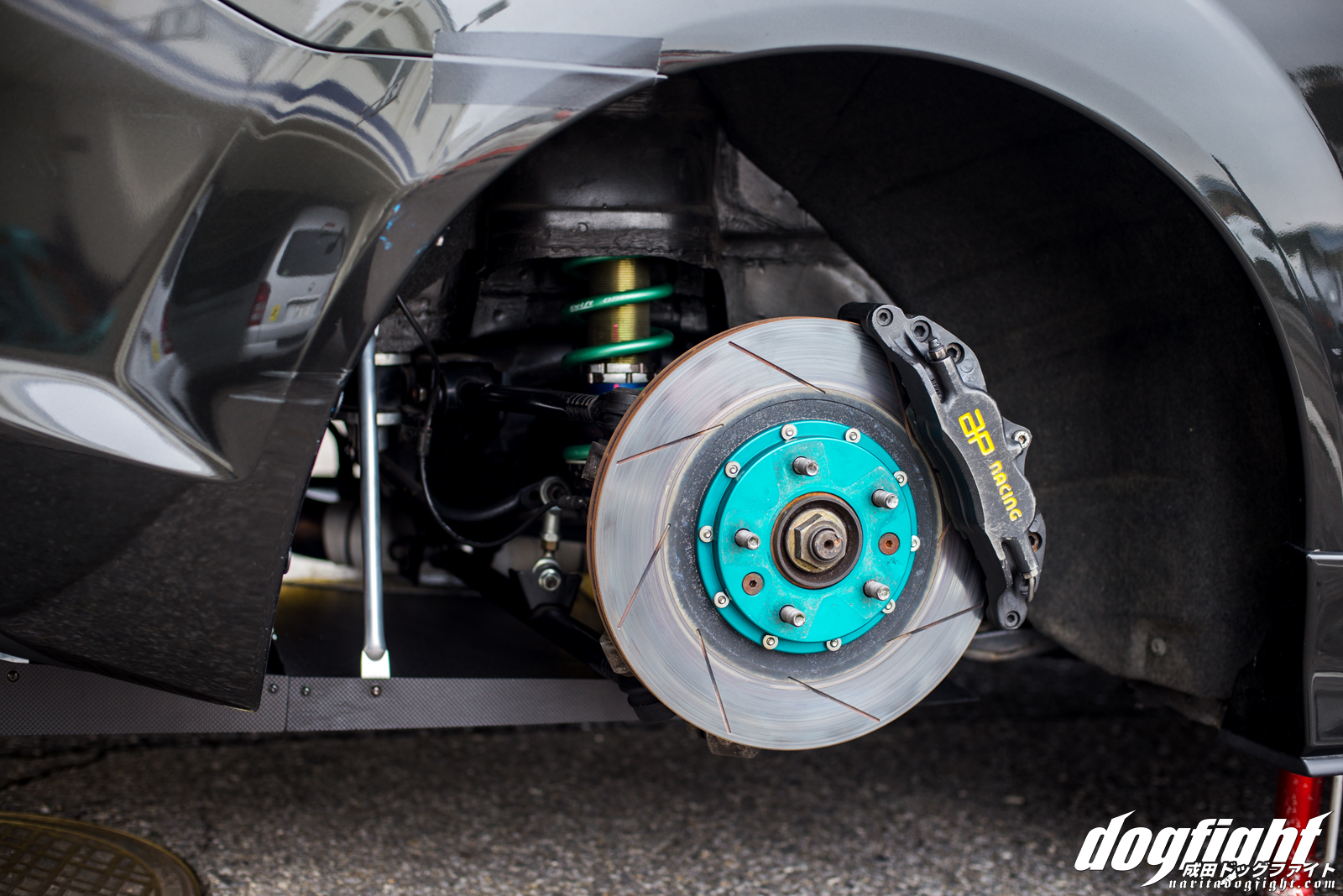 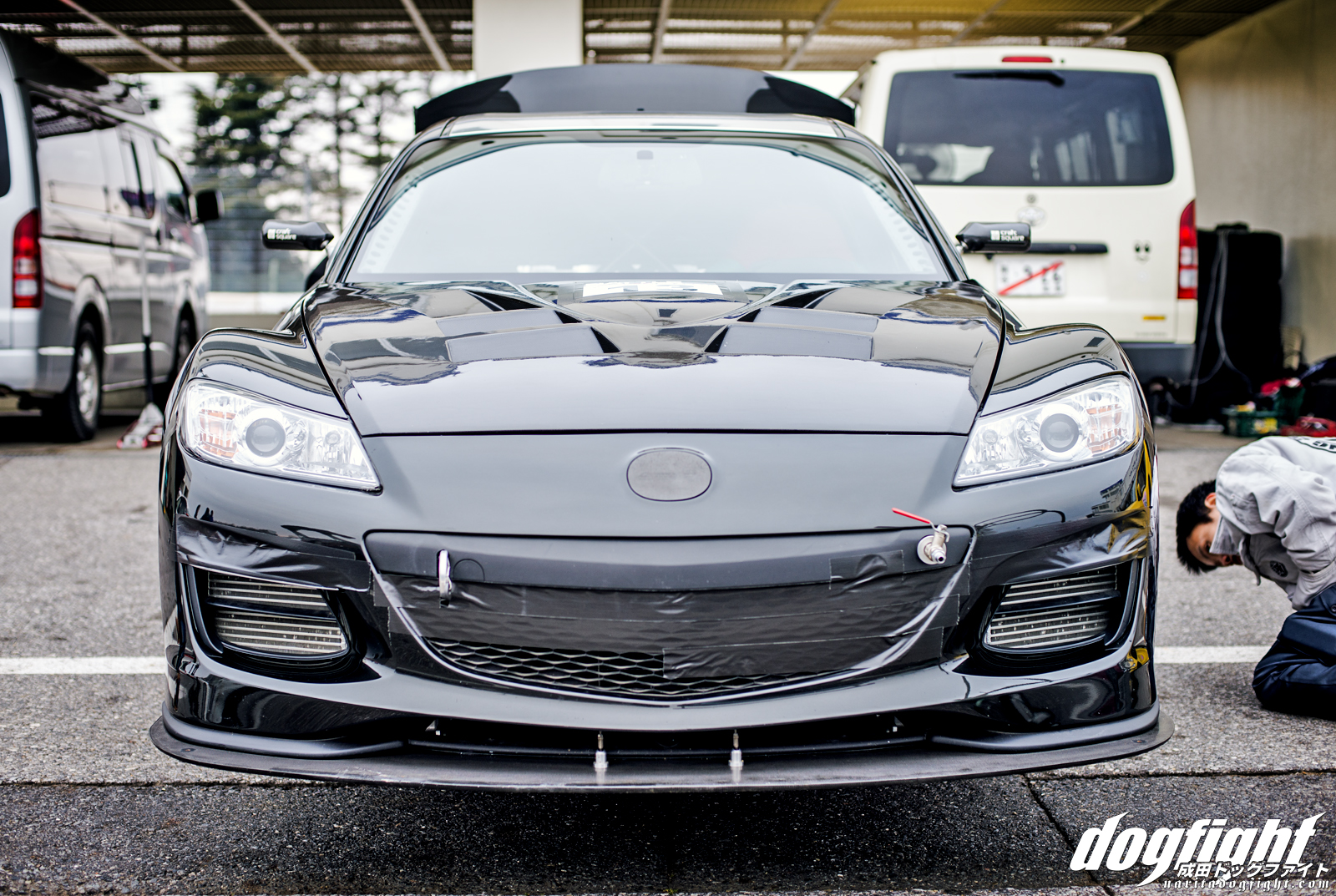 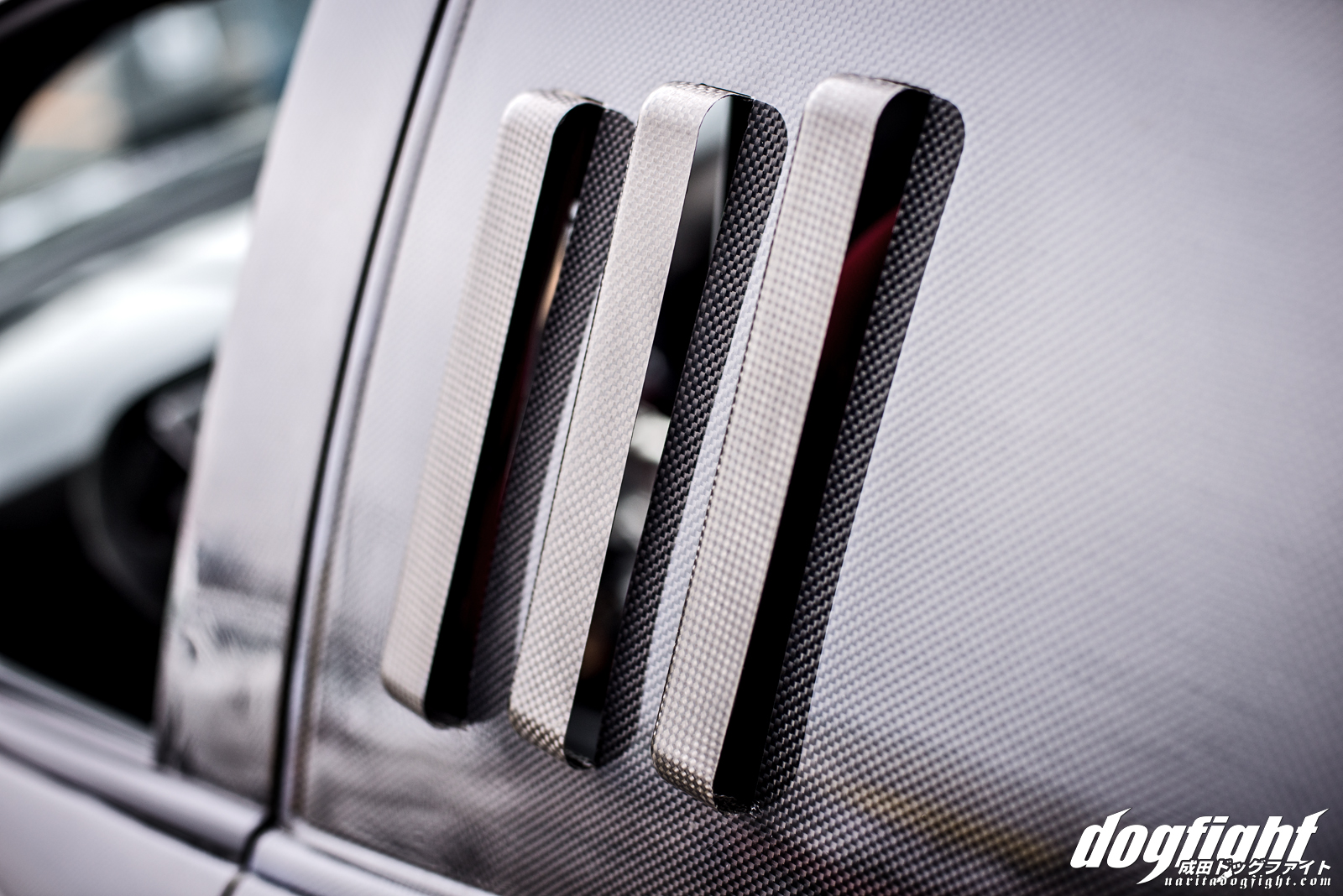 The rear windows feature these vents molded into the carbon, that are actually a part of the full carbon door. 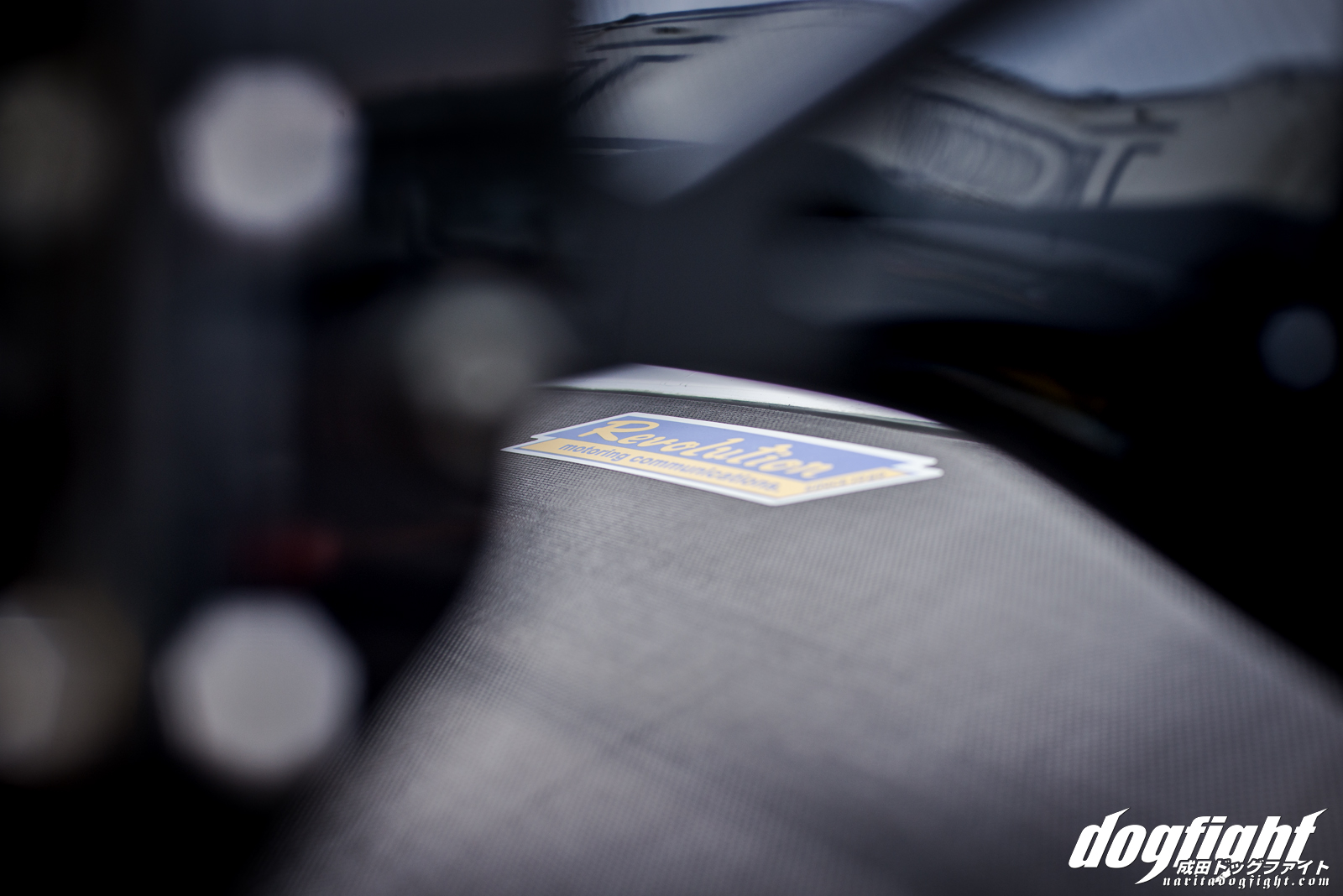 A Revolution decal sits atop the carbon rear window as a subtle tip of the hat to it’s creators.  Many heavy parts on the car have been replaced with carbon fiber to help alleviate some of the weight the 20B has to carry around.  At just over 2500 pounds, they’ve done a good job at just that. 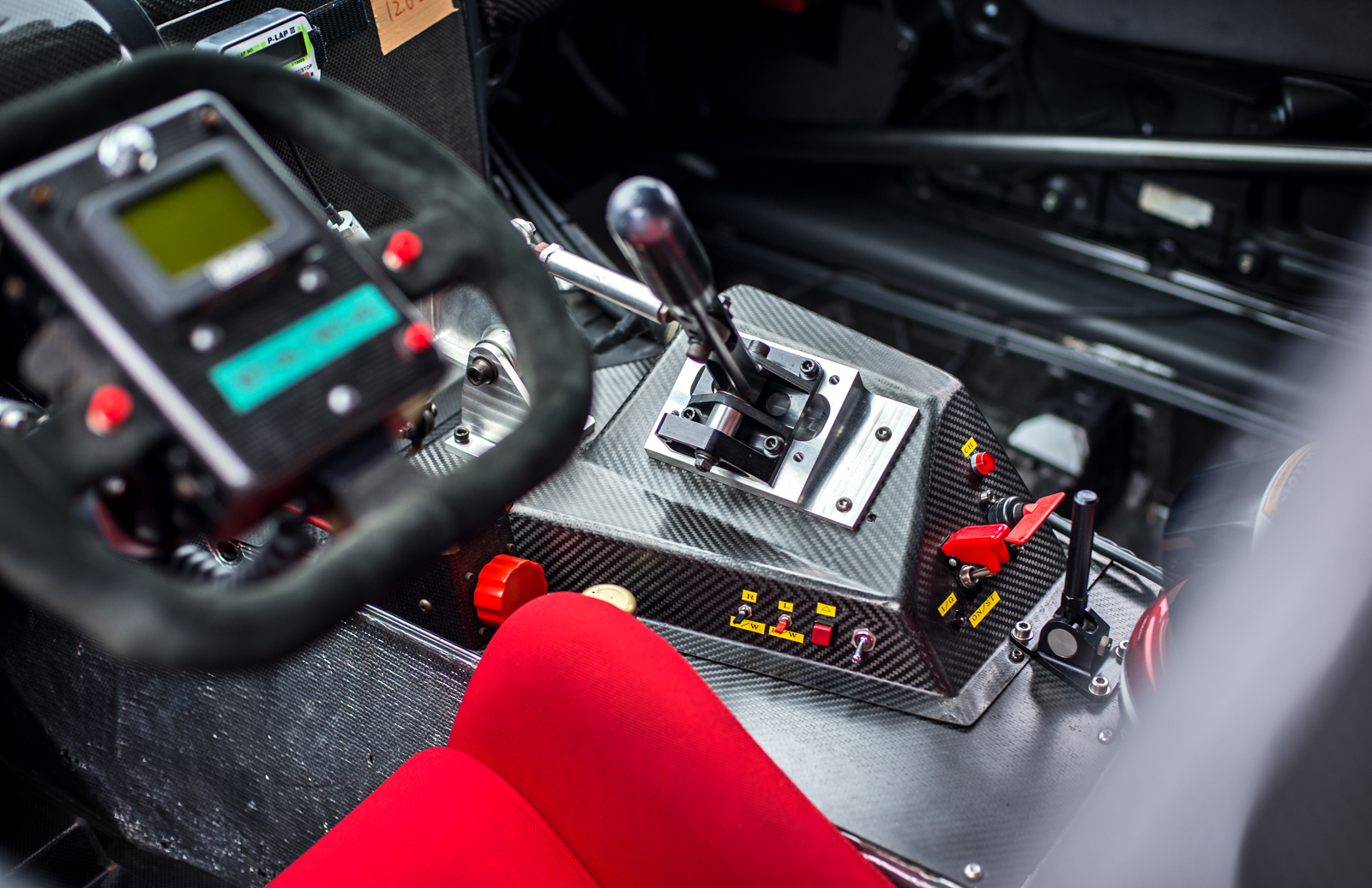 A Hewland Engineering 6-speed sequential transmission with much closer rations resides where the OE unit used to be.  It’s housed in a custom made, carbon tunnel that features a nifty linkage adapter plate that’s tilted towards the driver for a closer range of motion.  Revolution also utilized real estate on the housing for a few switches that control a variety of car functions. 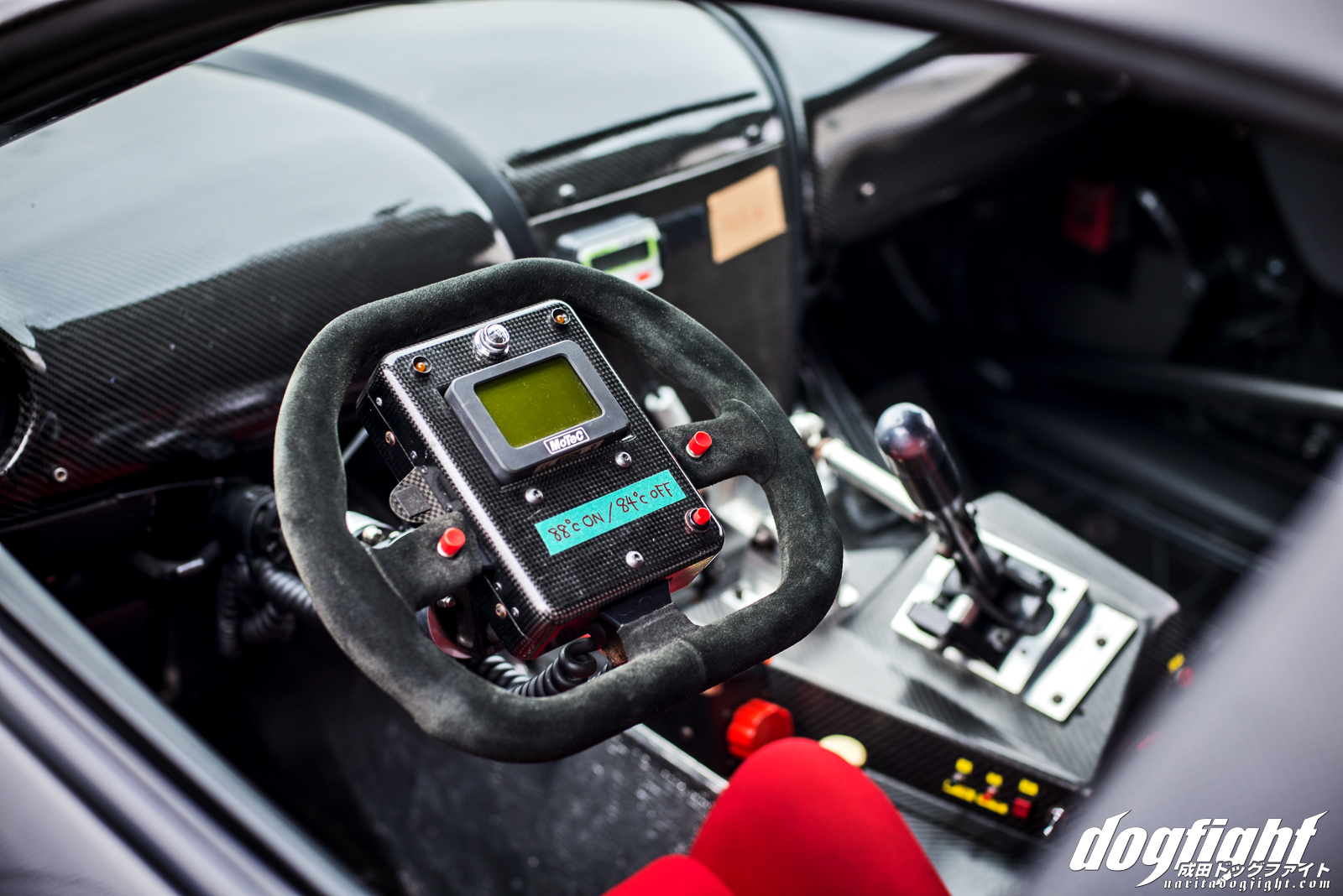 The engine is tuned with a Motec M4 unit with a Motec display united mounted on the steering wheel – very cool.  The carbon dash kind of hides the fact that the steering column has been extended to compensate for the new engine location. 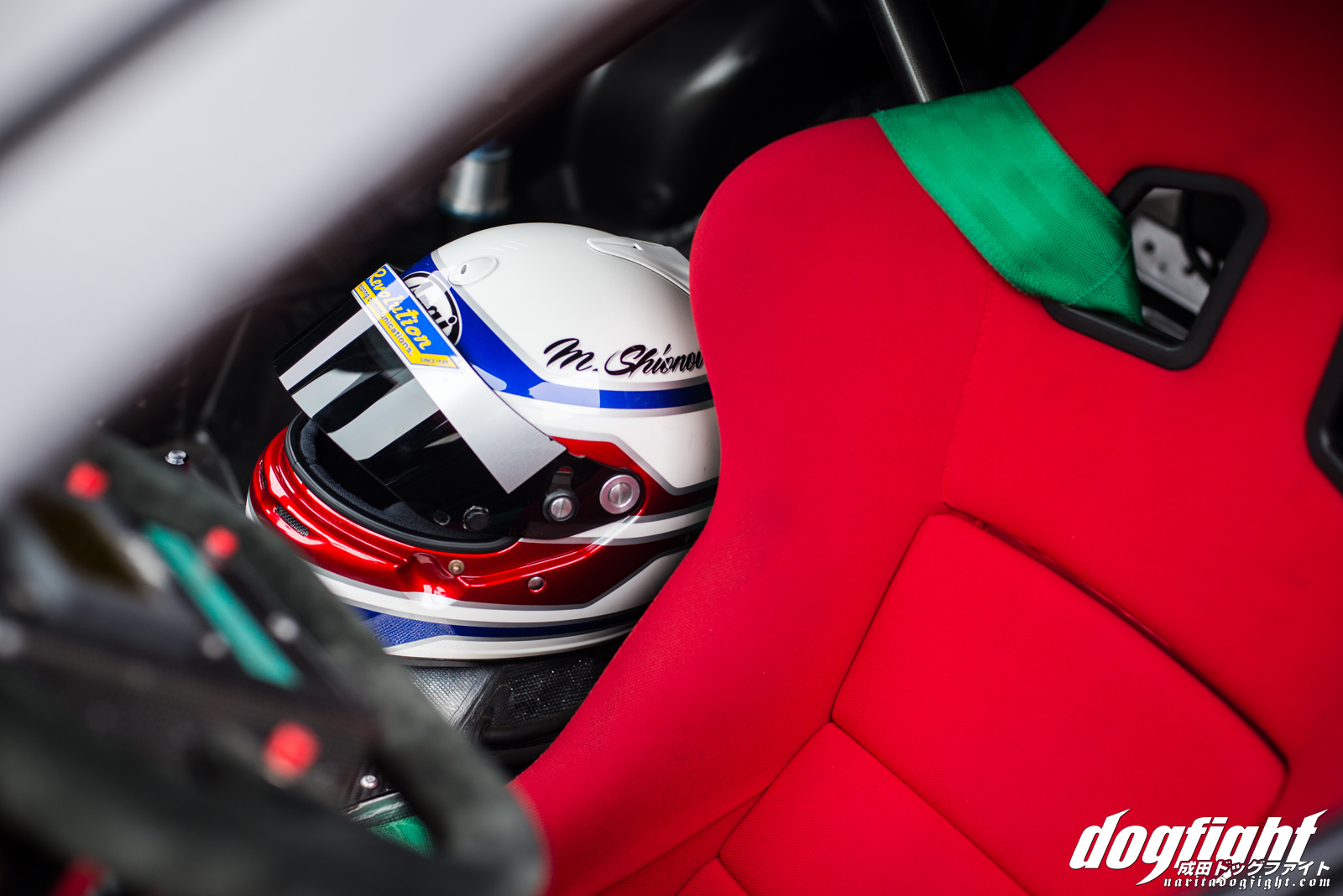 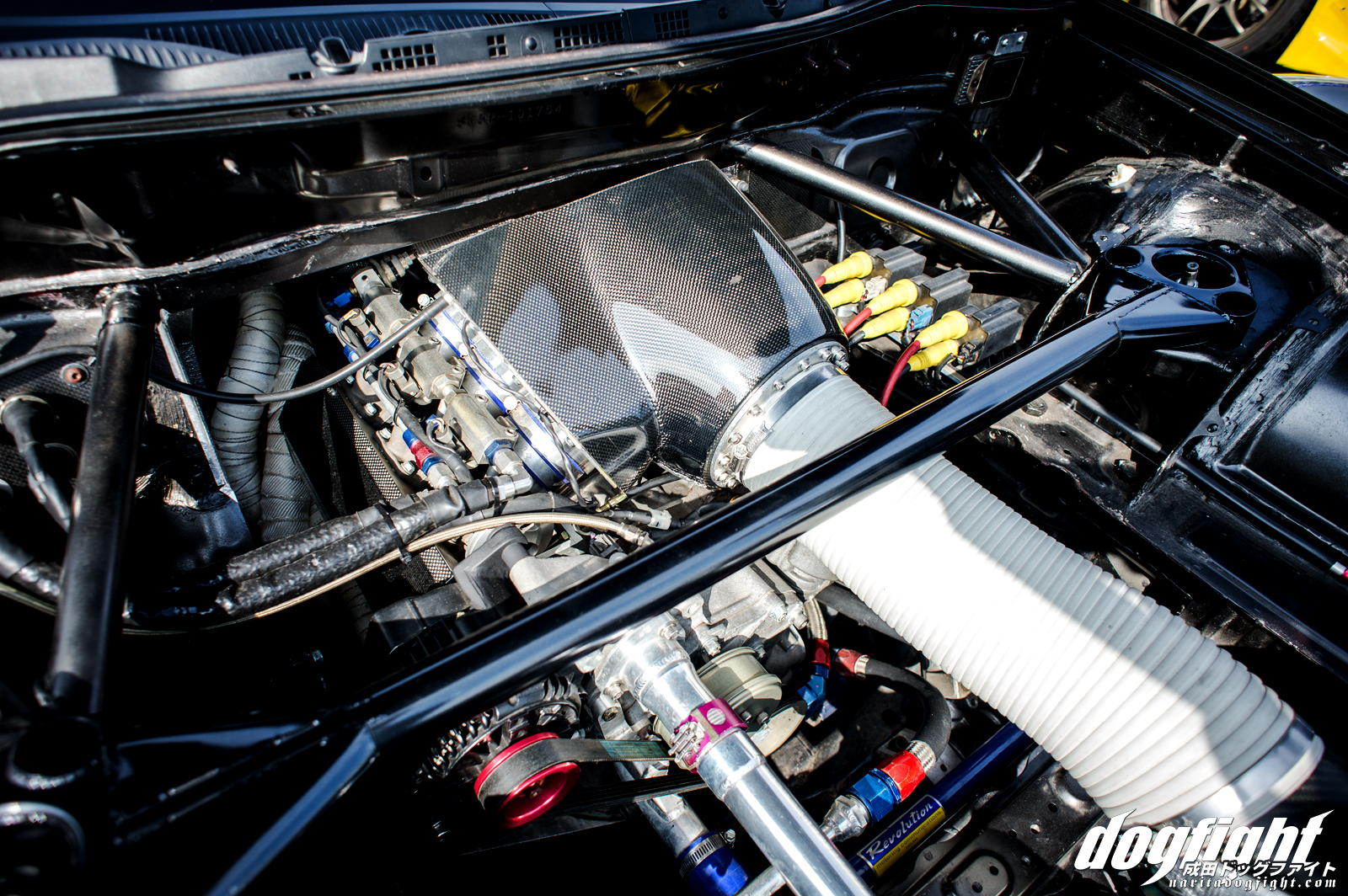 Without a doubt the feature of this build is hidden beneath the Revolution vented carbon hood.  The peripheral ported 20B, built with custom Revolution rotors, makes well over 400 horsepower.  You can see the custom carbon airbox that directs air to the three throttles hidden beneath it.  Setting the engine as low and as far back as they could, Revolution took the steps to plan out the lowest center of gravity possible. 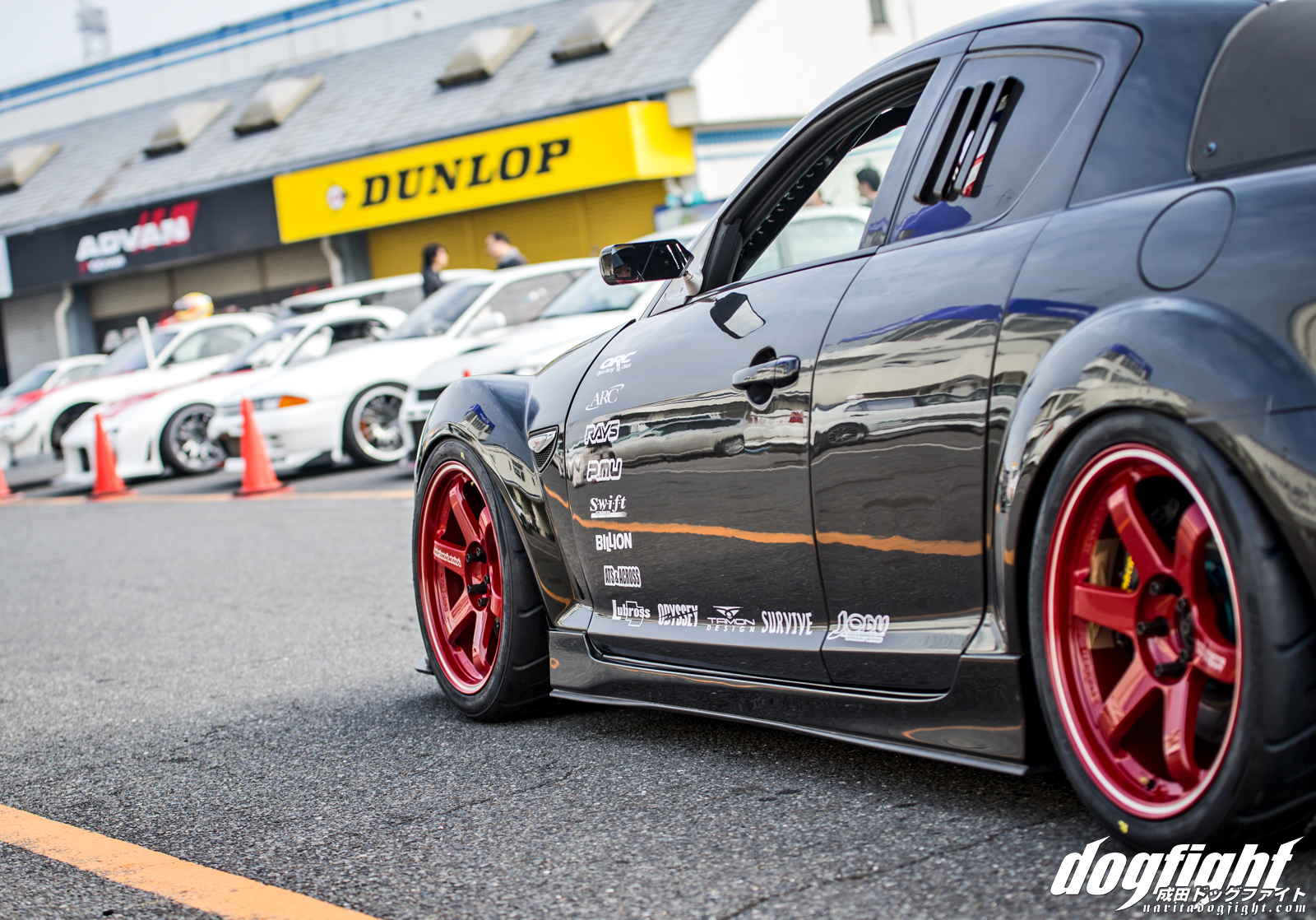 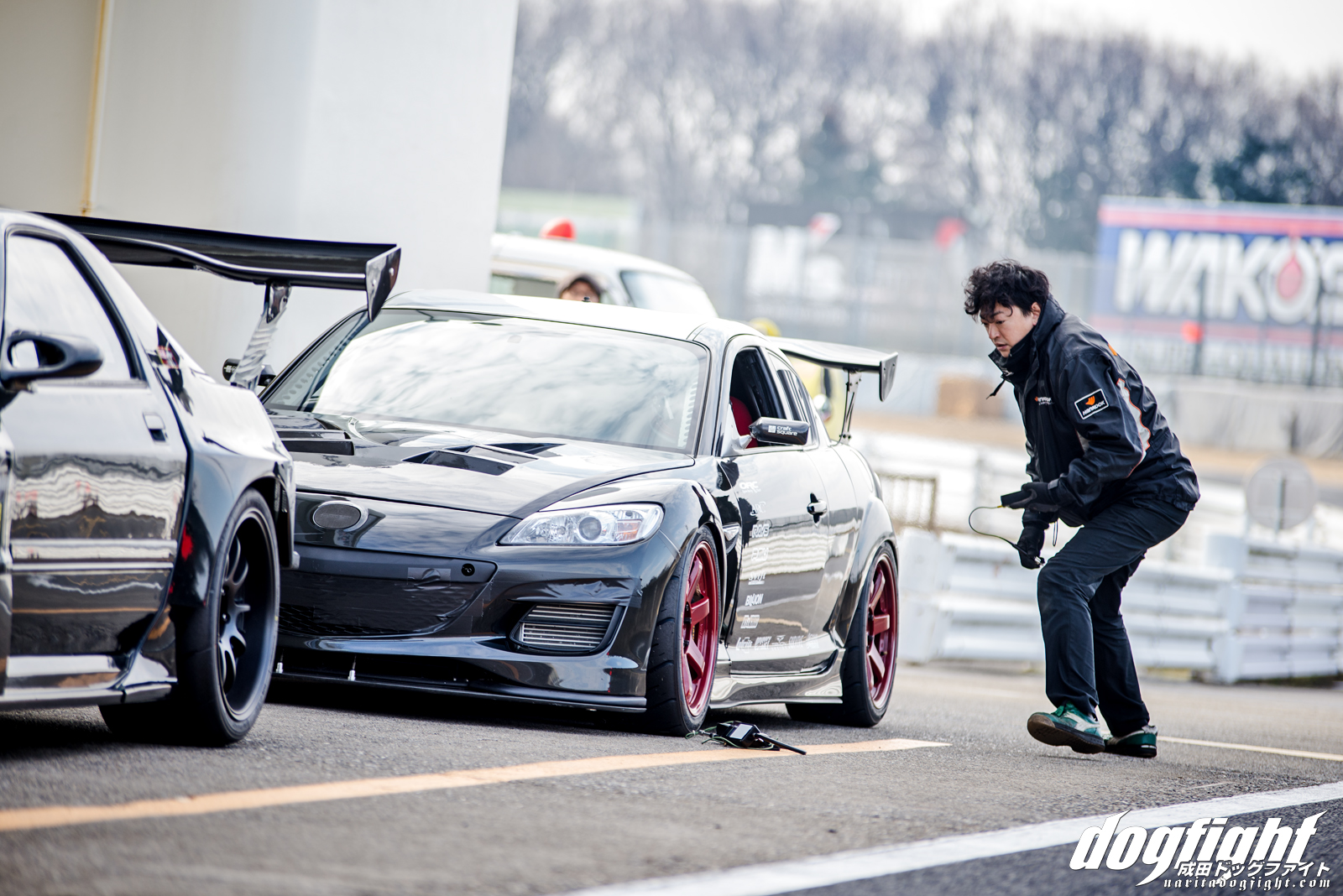 Out on track, the hard work that went into this build sure showed. 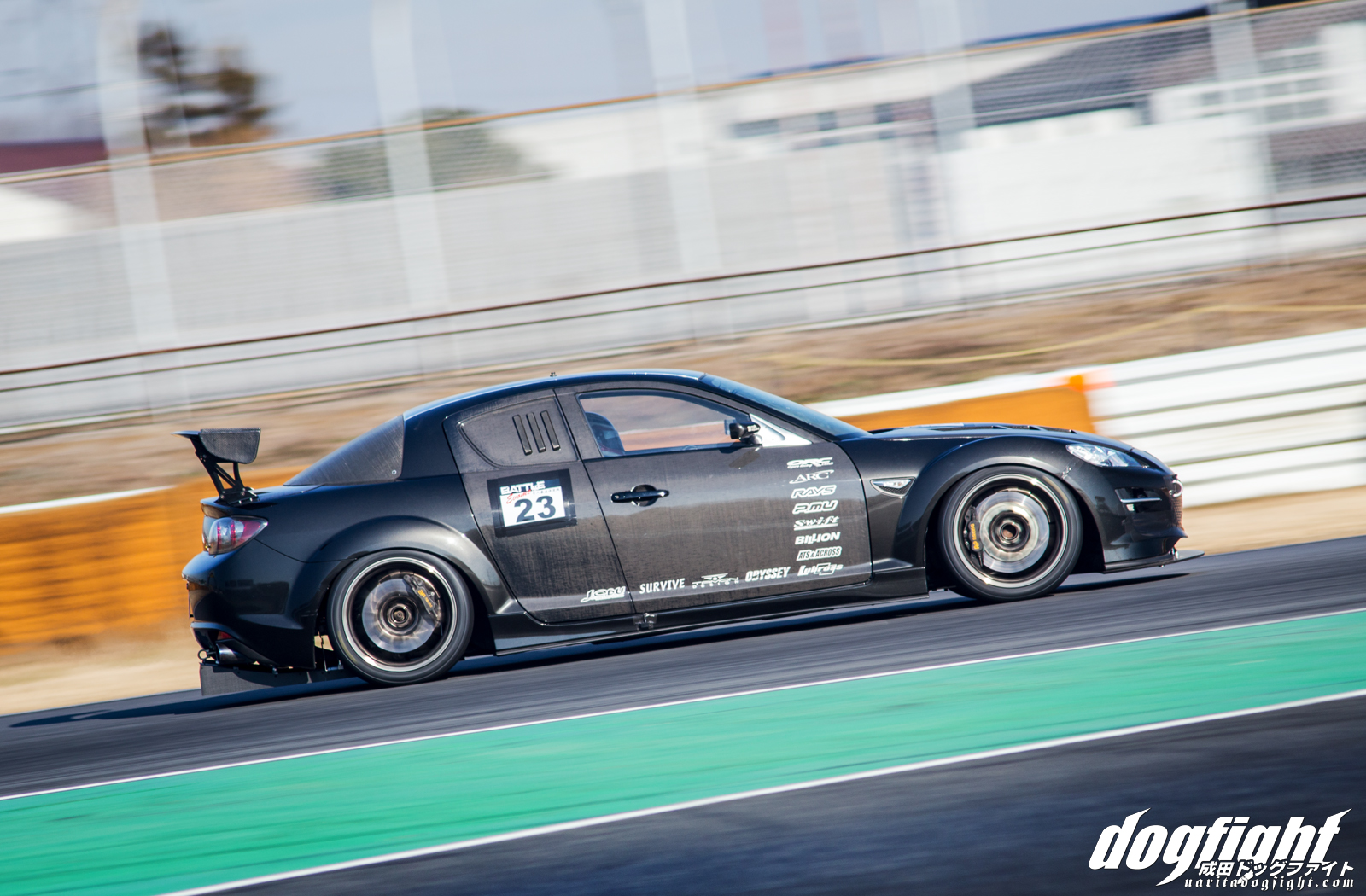 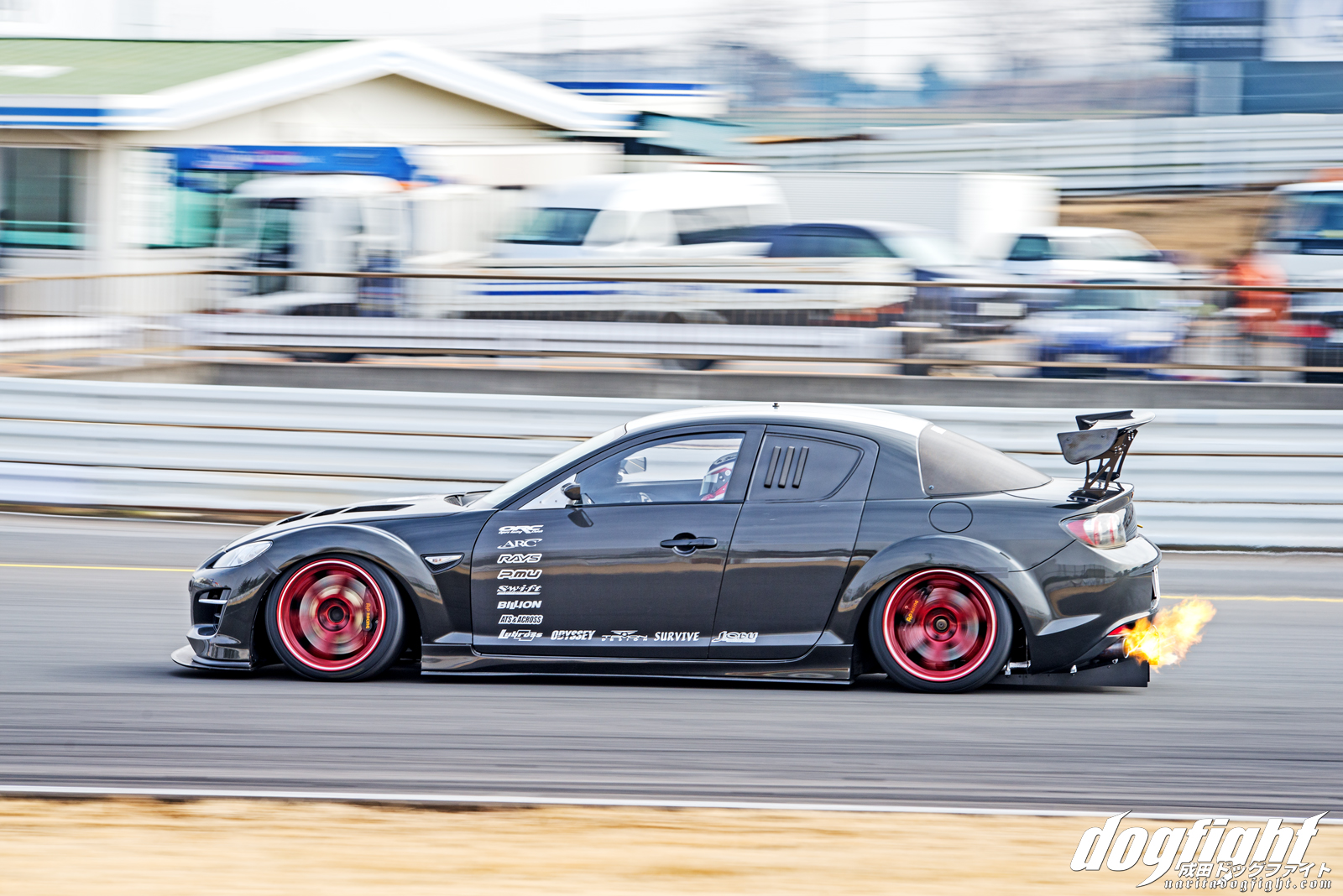 Although it seems the car is no longer in Revolution’s custody, it’s nice to see it still being put through it’s paces.  I would love to see the car developed further and perhaps take on an entirely new look if the owner ends up exploring aerodyamic options to make the car faster on track.  With an engine as unique as it’s current one, and as great a job as Revolution did building it, it’s hard to imagine an improvement in the power department.

Whatever the decisions may be, I’m glad I got the chance to see the car in person, and hope to see it at future events. 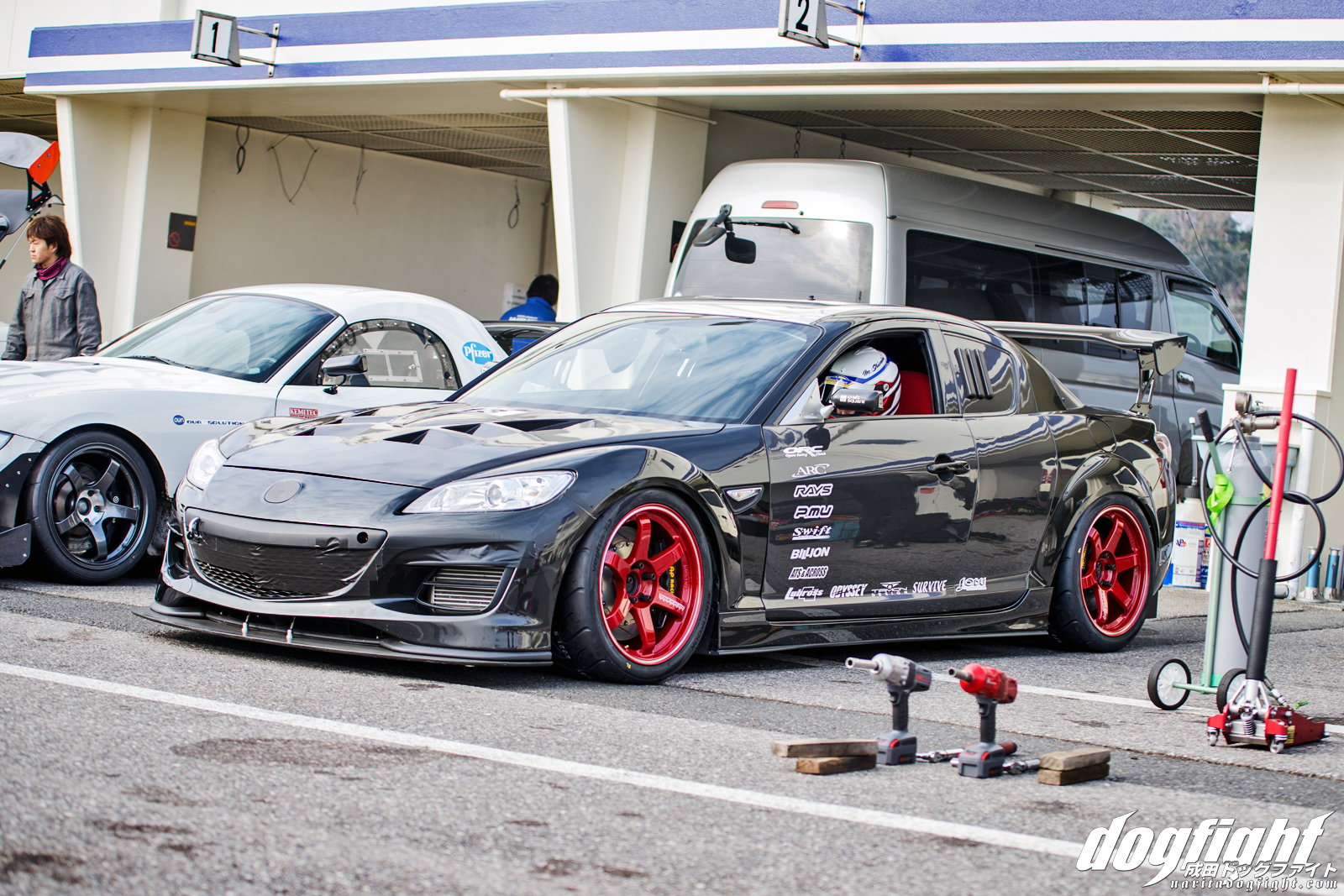