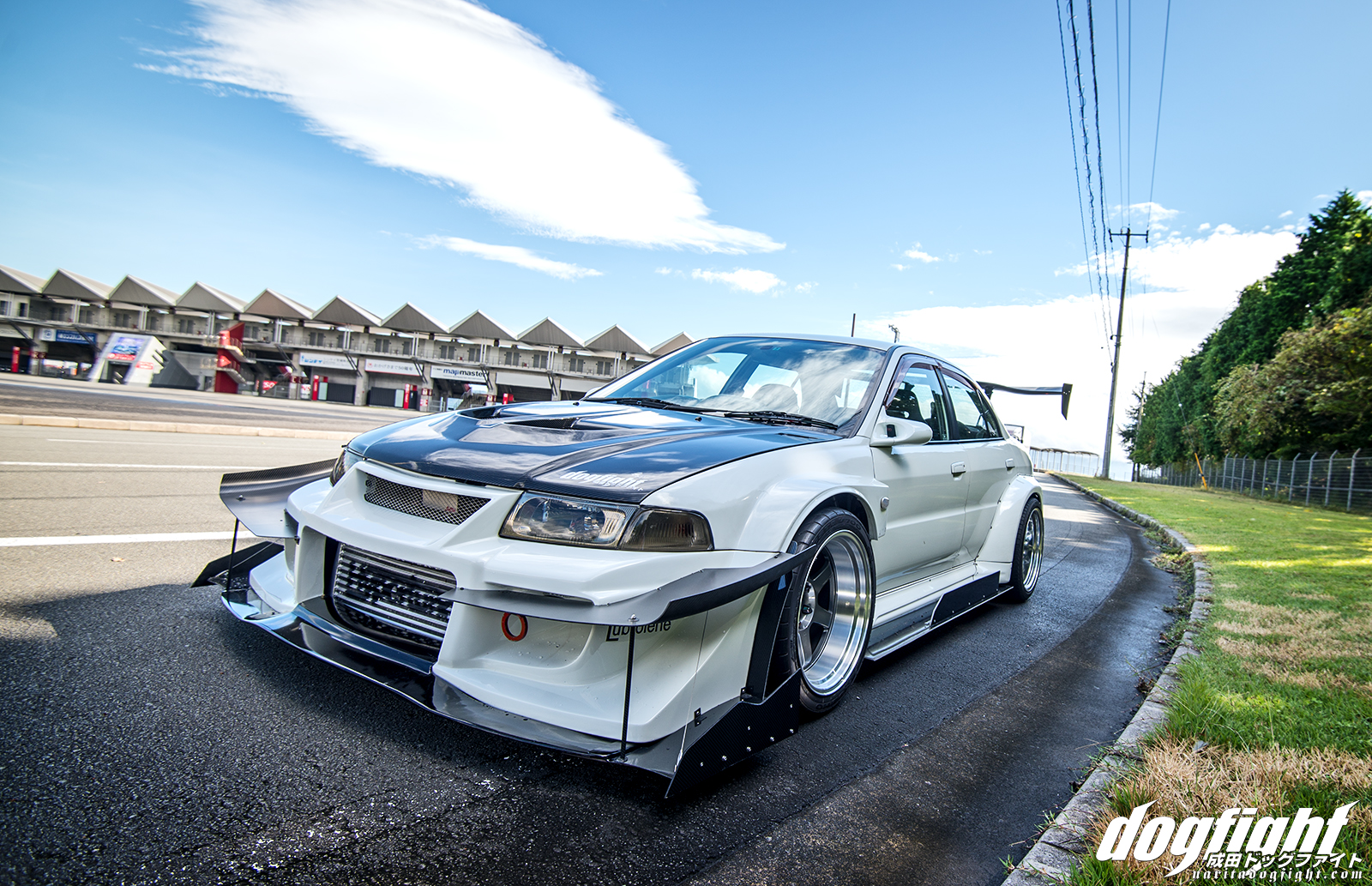 Morita purchased the Tommy Mackinen edition EVO in a fairly mild stage.  It wasn’t until after a few track days that he pulled the trigger on creating one of the most aggressive looking street cars in Japan.  If you want to make a presence with the CP9A chassis, you need not look further than to the Varis ASSO widebody kit.  The time attack focused aero provides additional downforce, increased cooling to the intercooler, and a massive 30+mm to the overall width of the car; perfect for the end product Morita was shooting for. 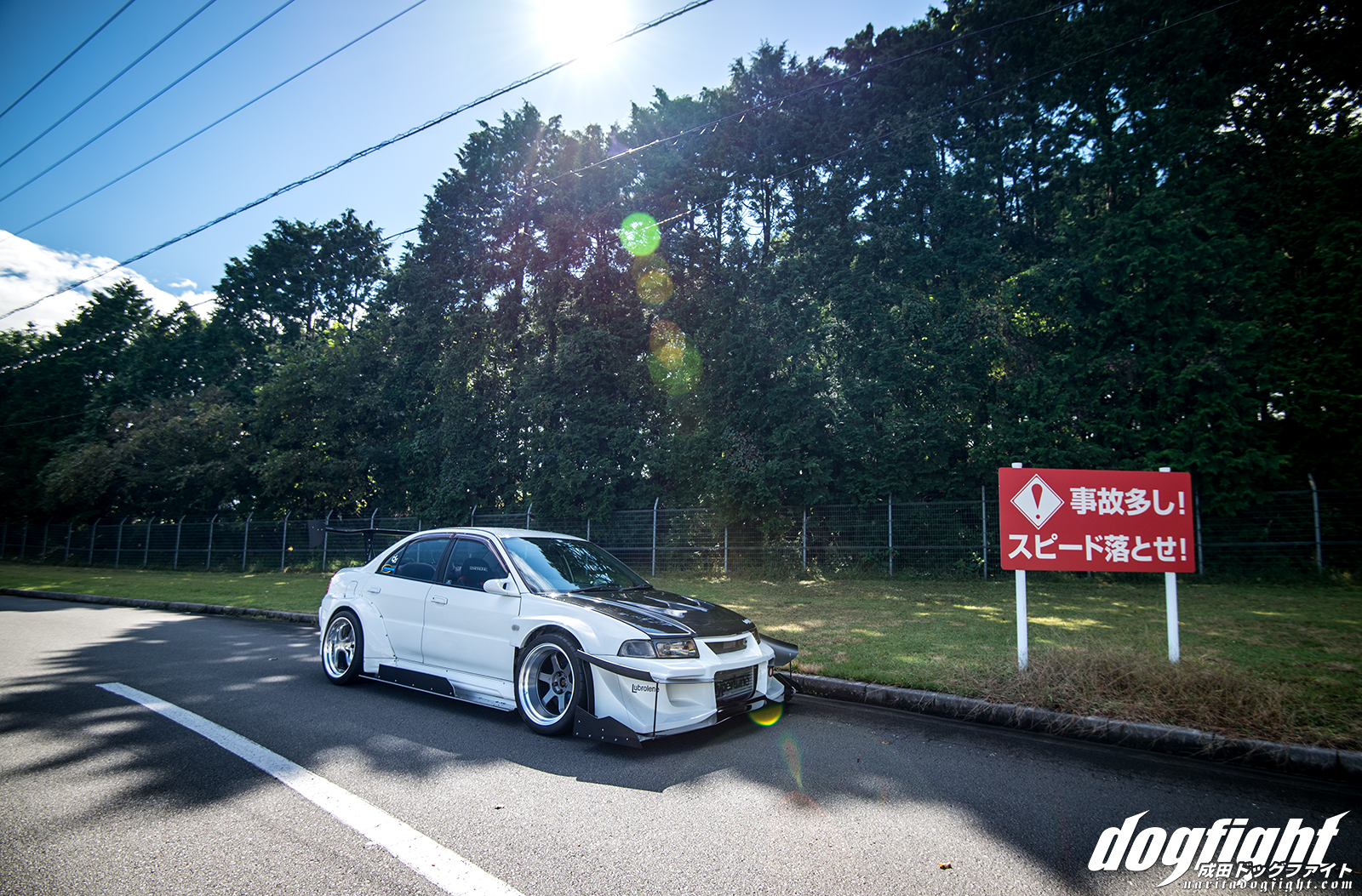 Of all the designs in the Evolution line, none other looks as capable as the CP9A.  It’s stocky, yet agile looking appearance is a working contradiction in itself, proven by its successes in several racing series.  It has racing heritage as a production car, and that’s the exact fate Morita had sought out for his version. 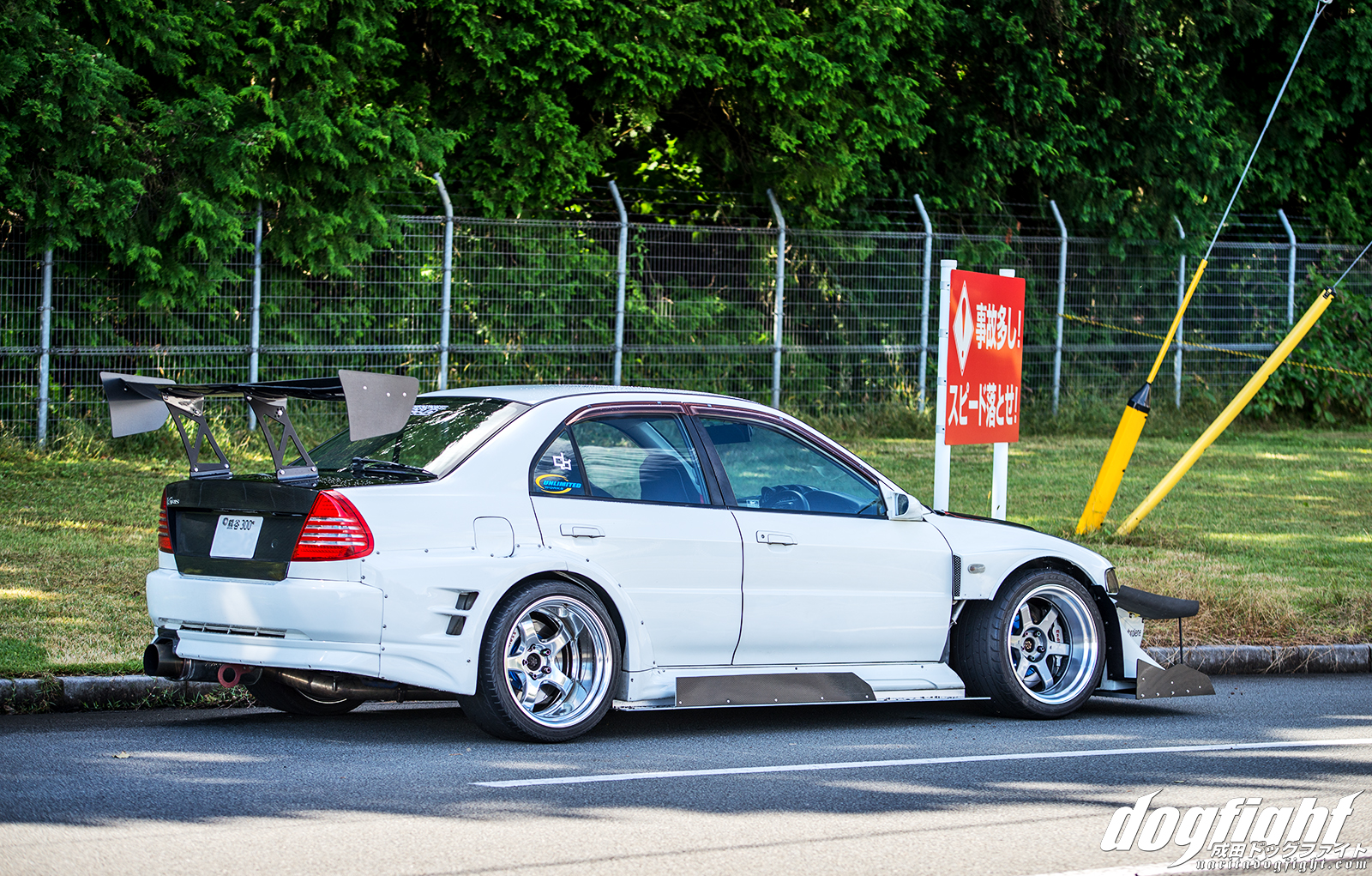 The car was left in the hands of Auto House Solid to have the new body panels fitted and painted to match the bright white exterior of the car.  Ganador side mirrors replaced the OE units to further increase the cars aesthetic appeal. 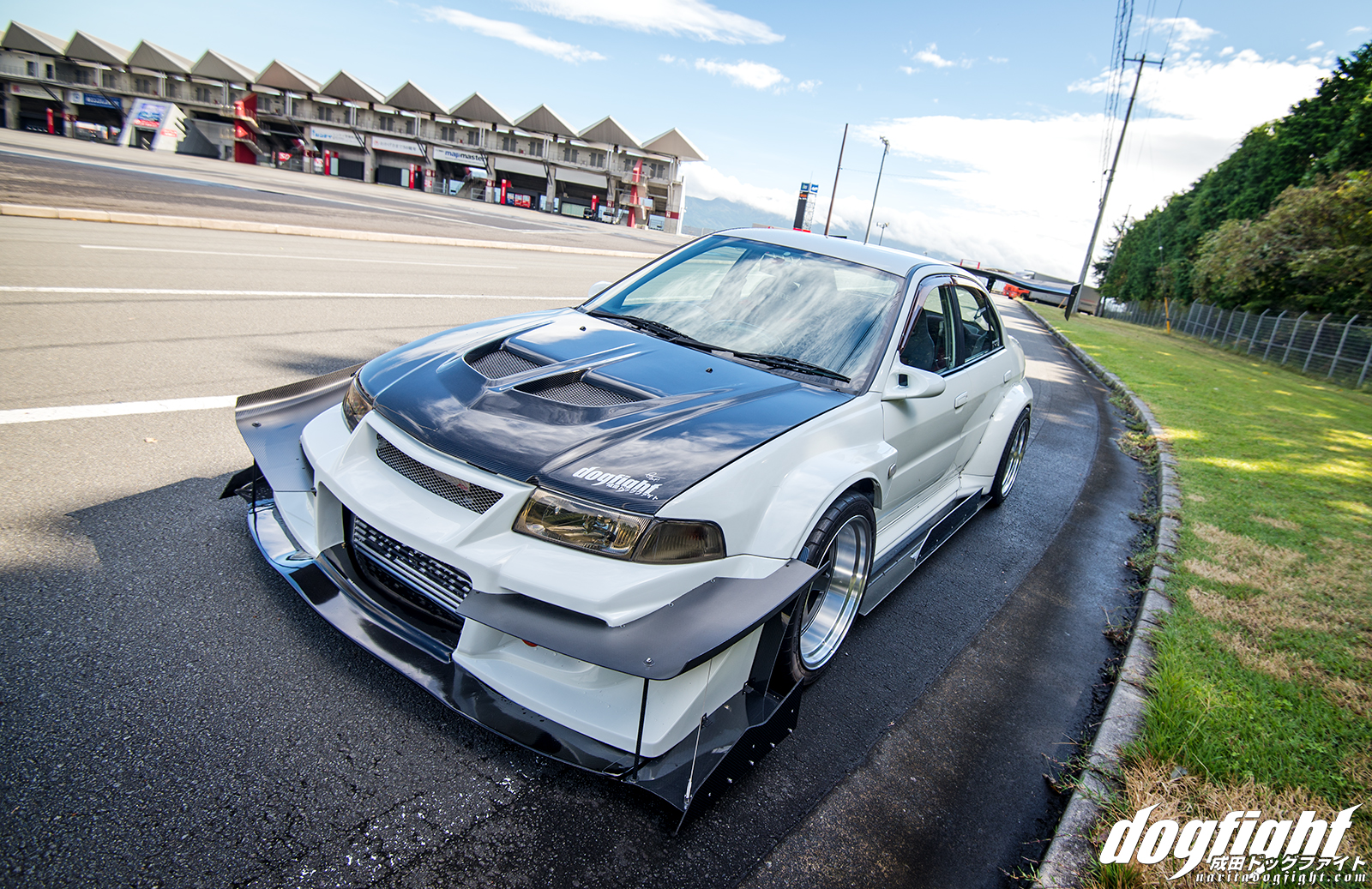 A combination of Voltex, and custom canards fitted were fitted to the front end to assist in aiding front-end downforce, and you know, just in case you weren’t sure how serious this car was. 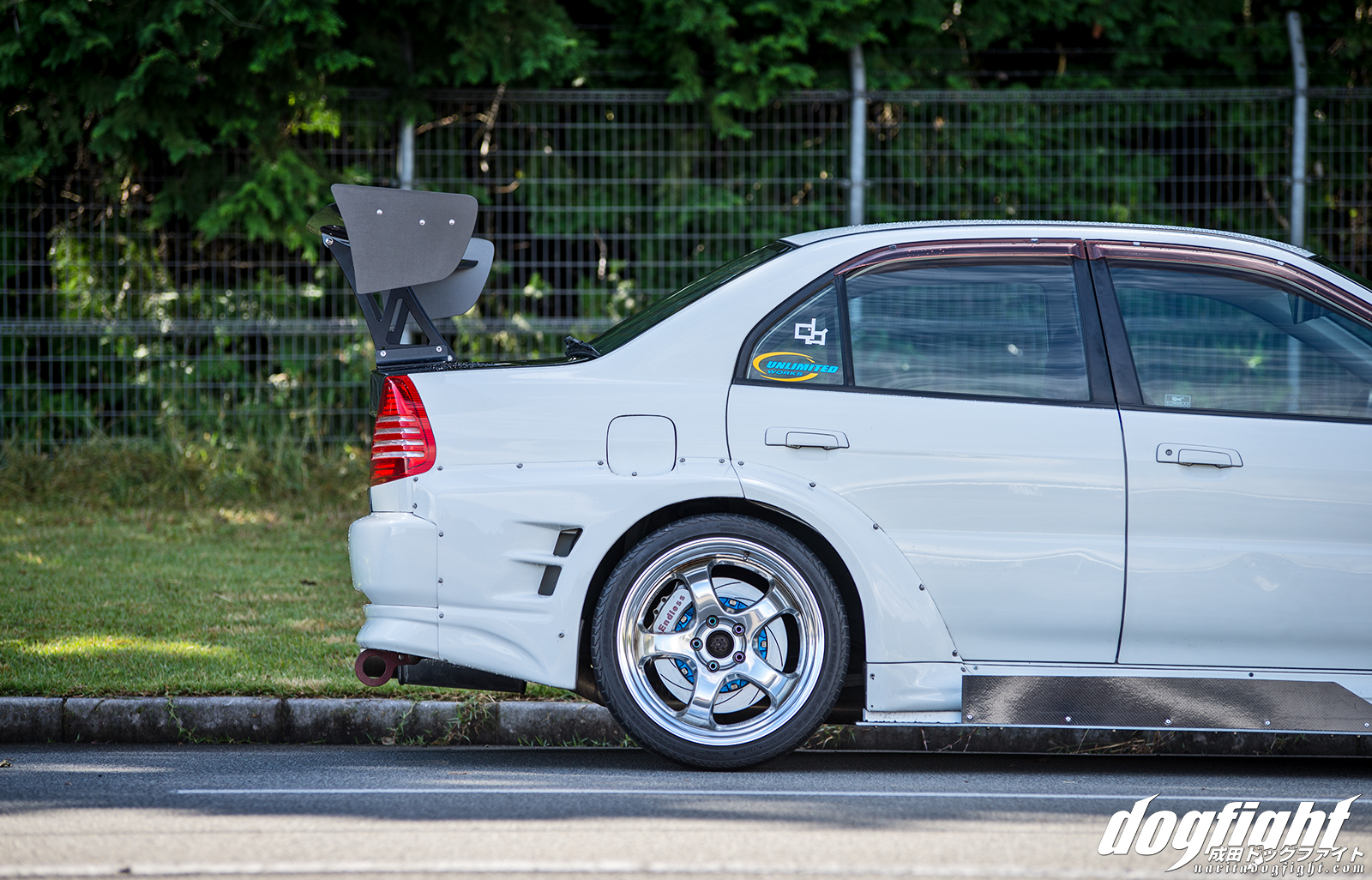 Carbon Voltex side strakes assist in directing air flow across the car and out the rear.  Air moving over the top of the car is met with a rather large SARD GT wing attached to the carbon trunk. 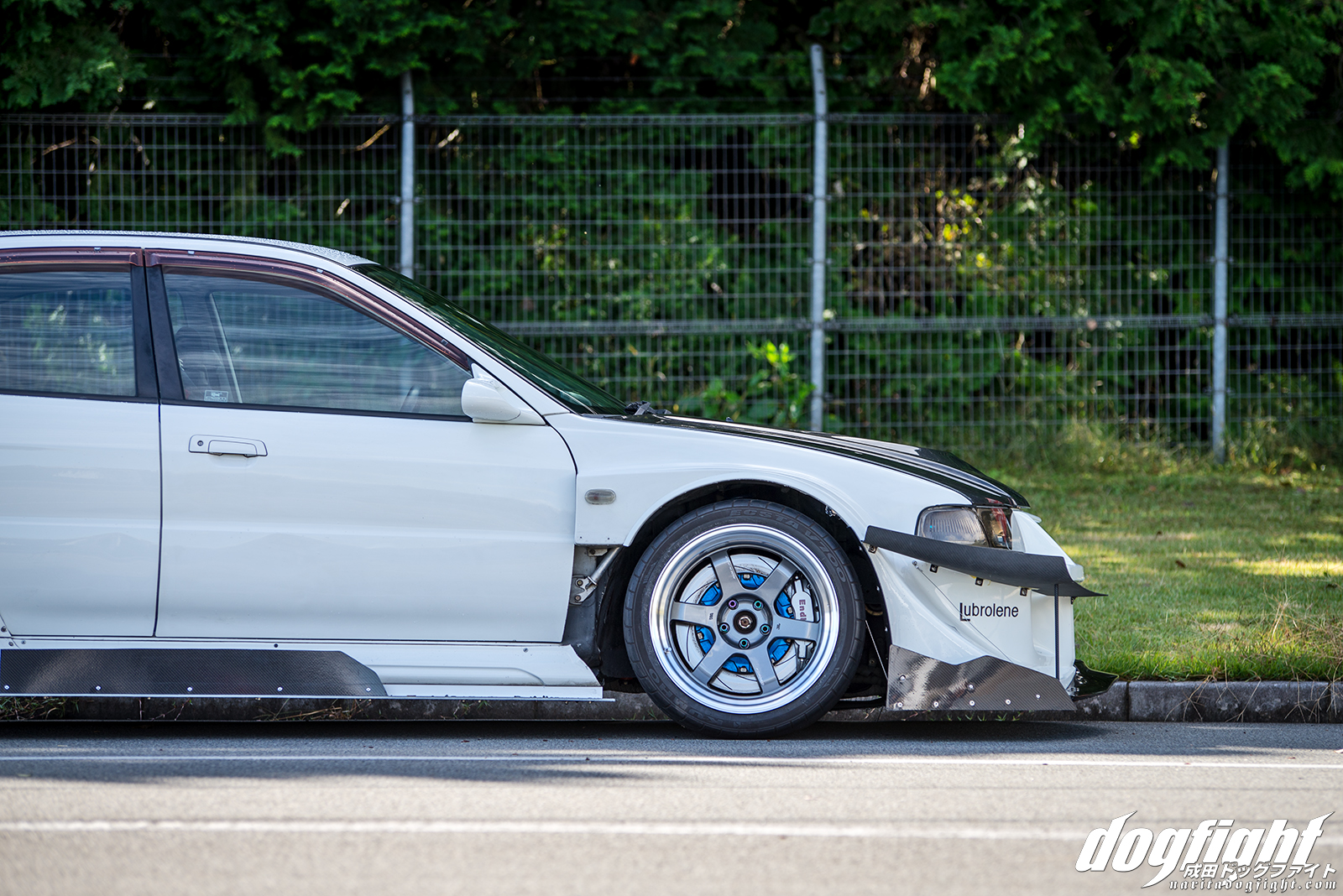 Front and rear brakes have both been upgraded in compliment to Endless.  Large, 4-pot caliper brakes on all corners ensure that the car is always consistent in braking on track. 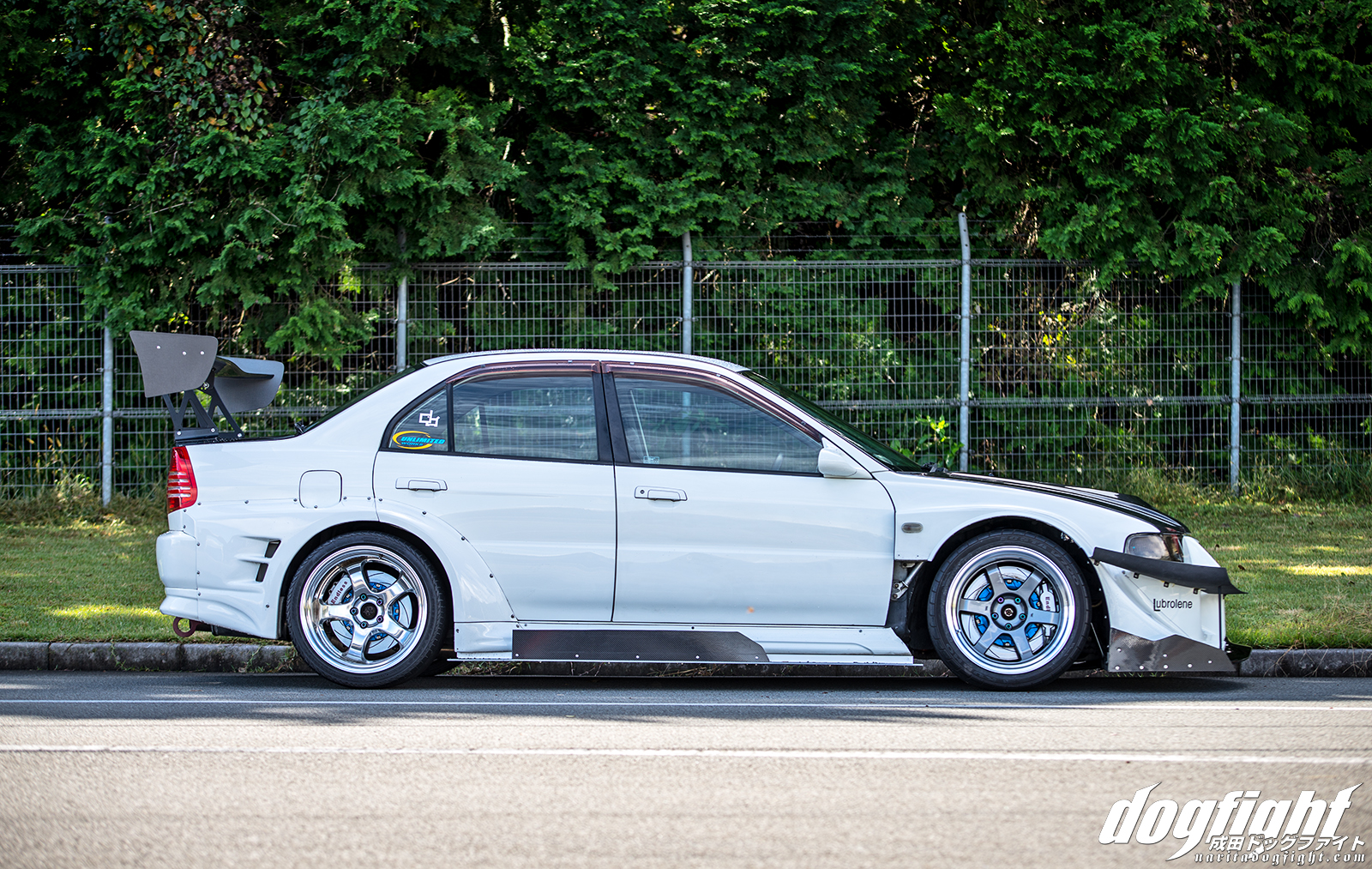 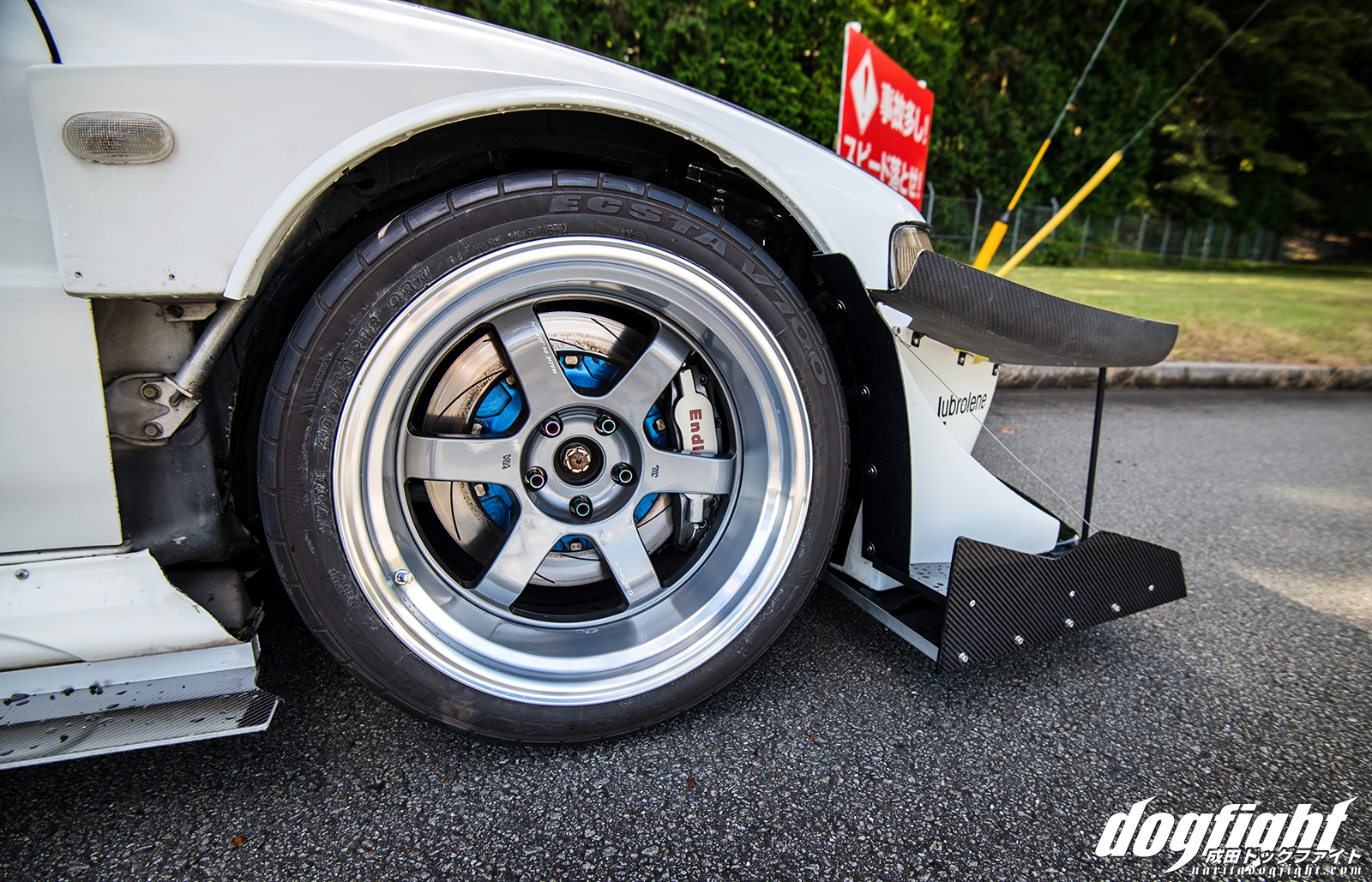 On track, Morita’s go-to tire is the Direzza ZII; a favorable tire among enthusiasts who also street their car.  A couple old pairs of Ecsta’s and Bridgestones were thrown on for today’s outing however.  We were laughing that he had 305’s up front, and 295’s in the back. 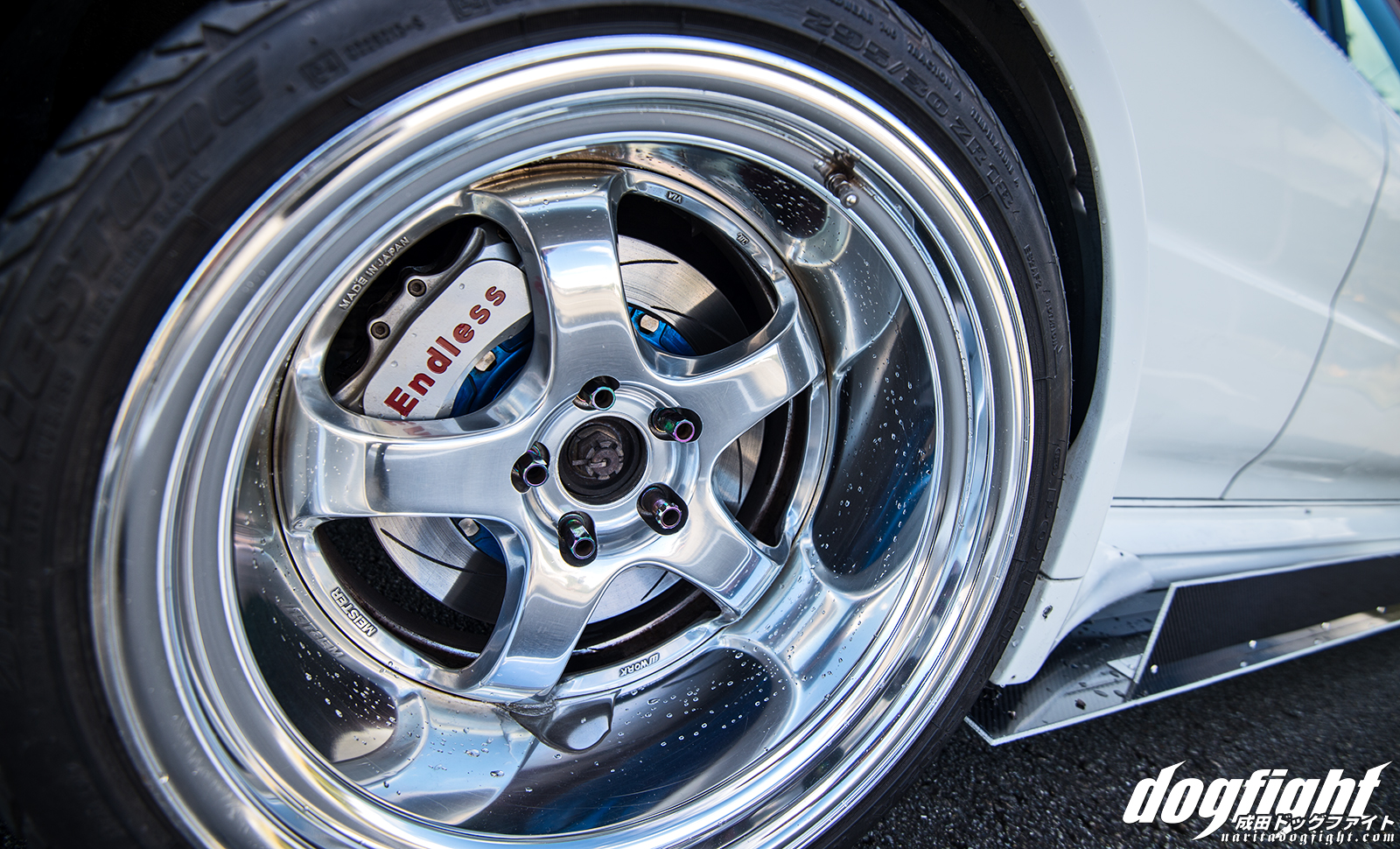 The Varis fenders allow him to fit the massive set of wheels in the front and back.  Both the TE37’s and Work Meisters are 18 inches, with width and offsets of 11″/-30 and 11.5″/-35 respectively.  The huge lips on both the wheel pairs definitely gives the car a unique look, and provides plenty of contact patch. 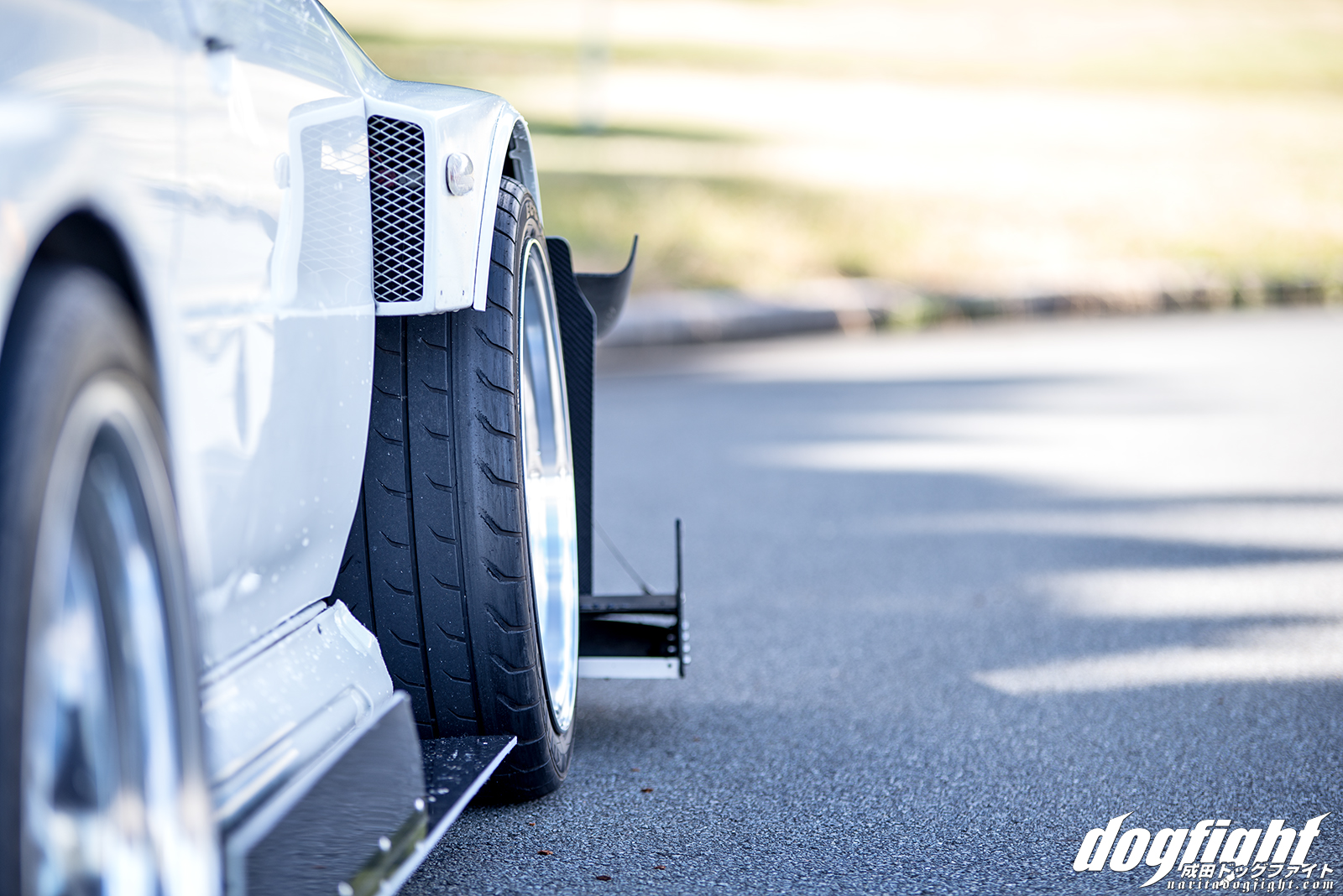 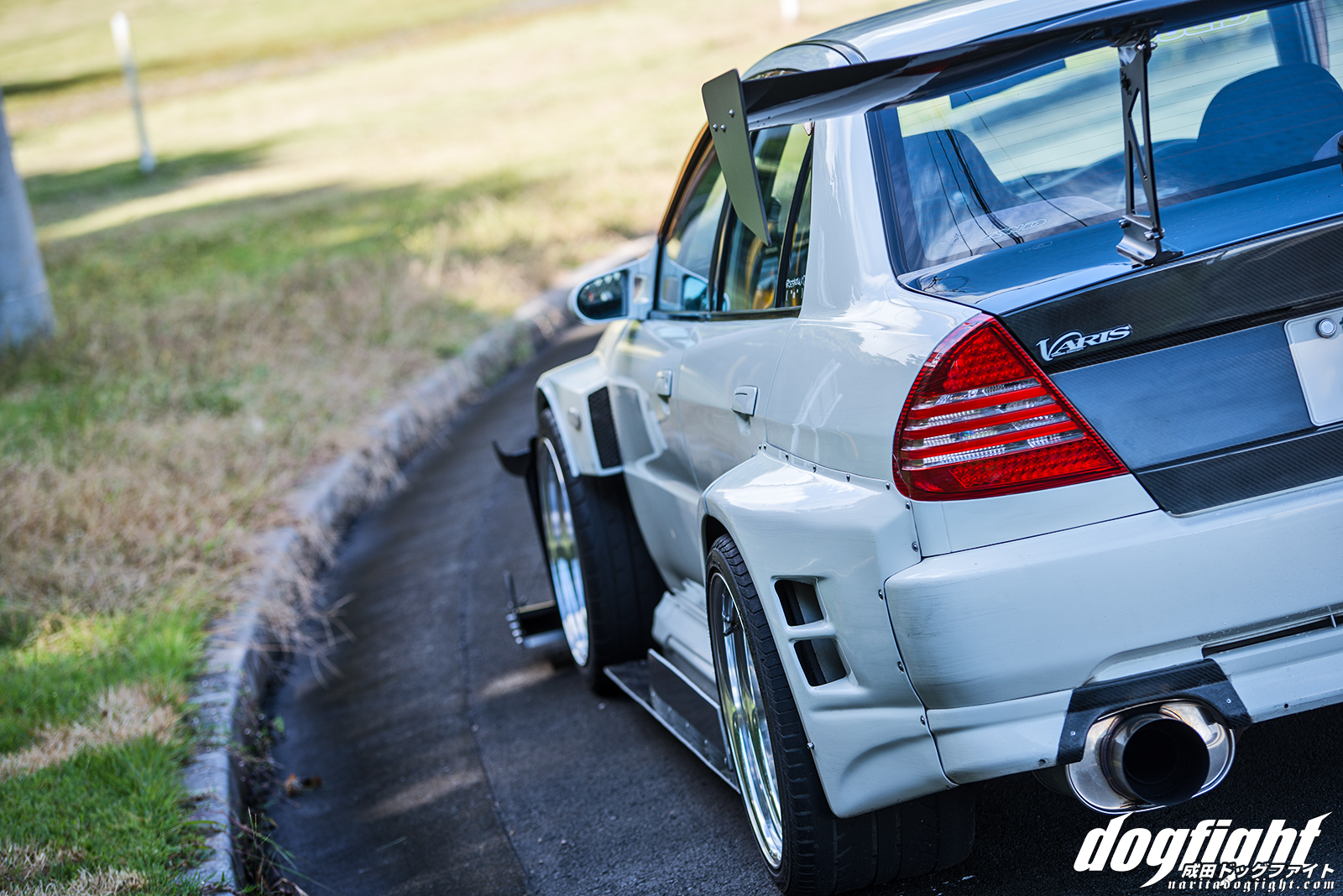 Looking at the car from the back gives you the best idea of just how wide this thing is. 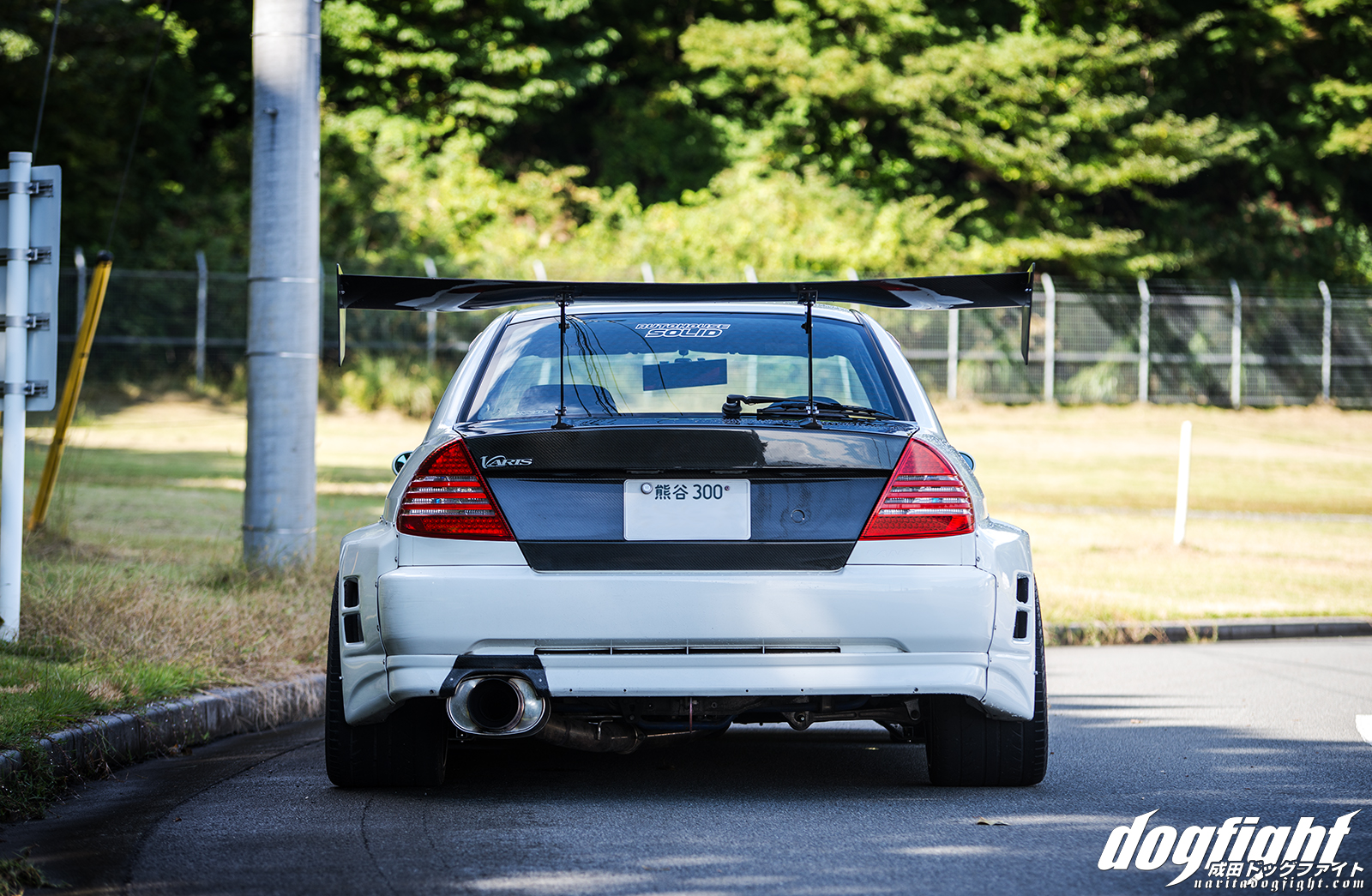 The car rests on a set of custom valved Ohlins coilovers.  Sato-san at Unlimited Works, over the years, has devised the ideal settings for particular EVO’s and was tasked with setting up the cars suspension.  In addition to the Ohlins parts, Morita threw a catalog of Cusco stabilizers underneath the car to assist in keeping the EVO planted. 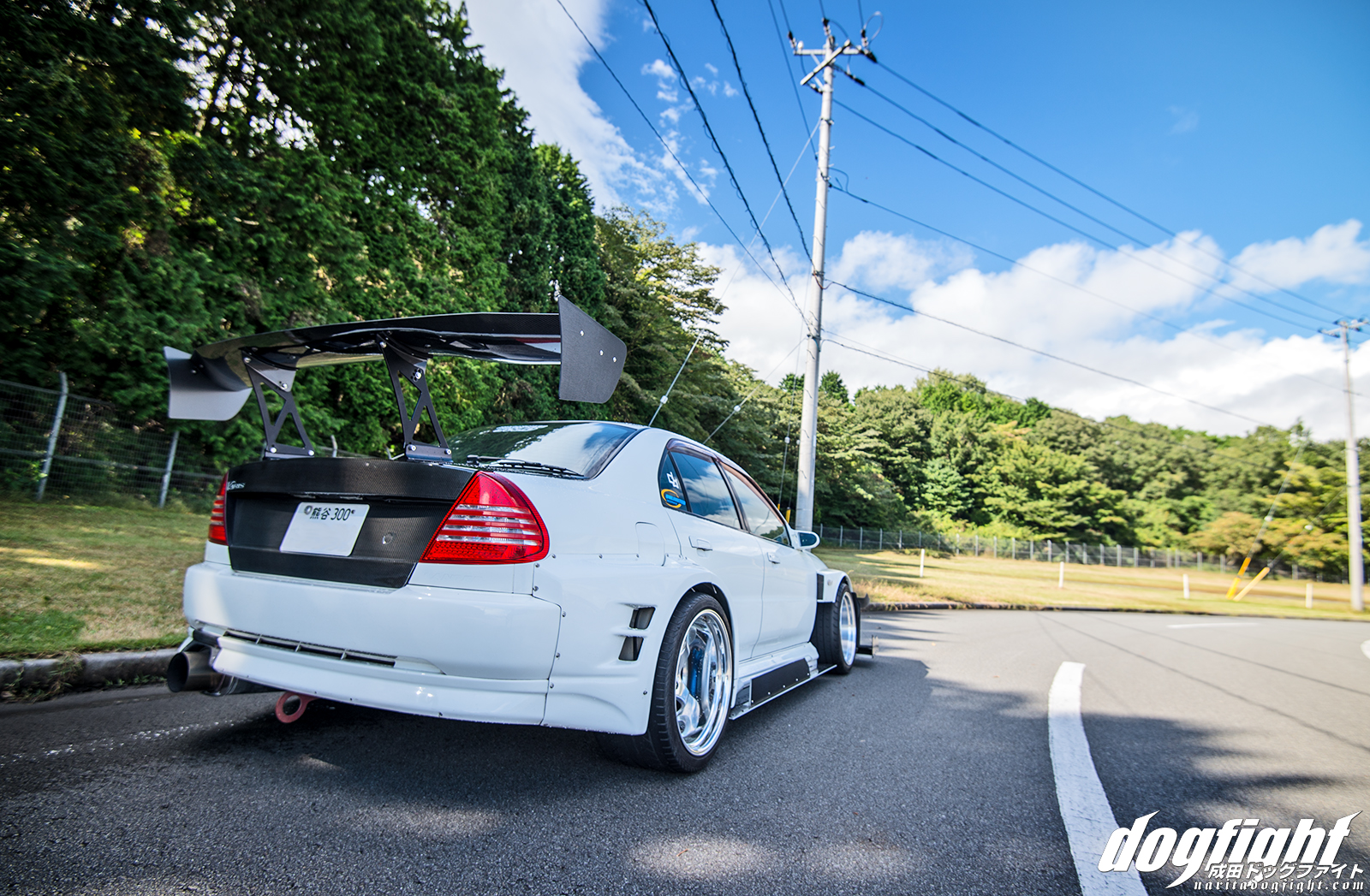 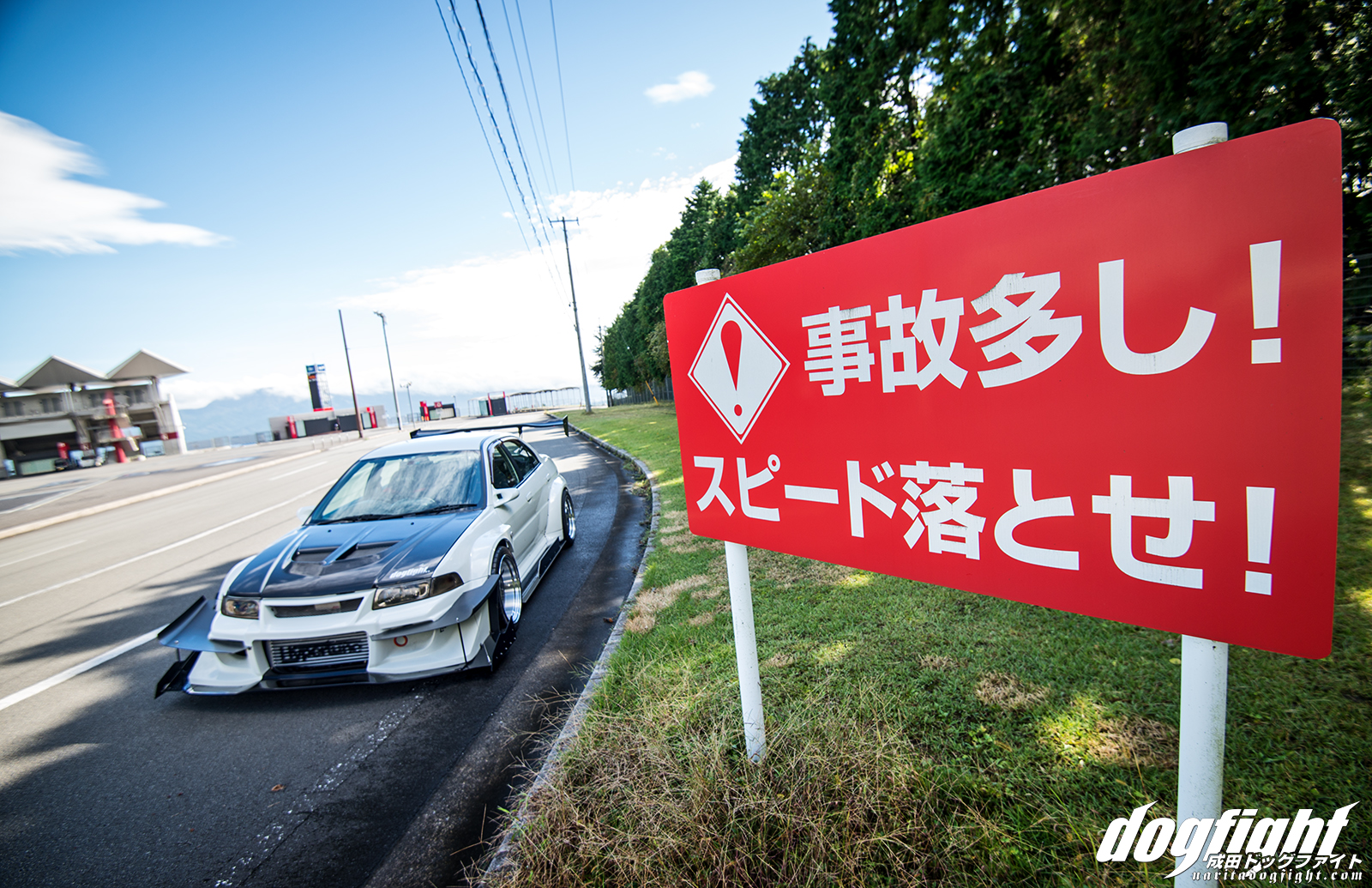 The sign at Fuji reads something along the lines of ‘be mindful of your speed’, around this particular corner. 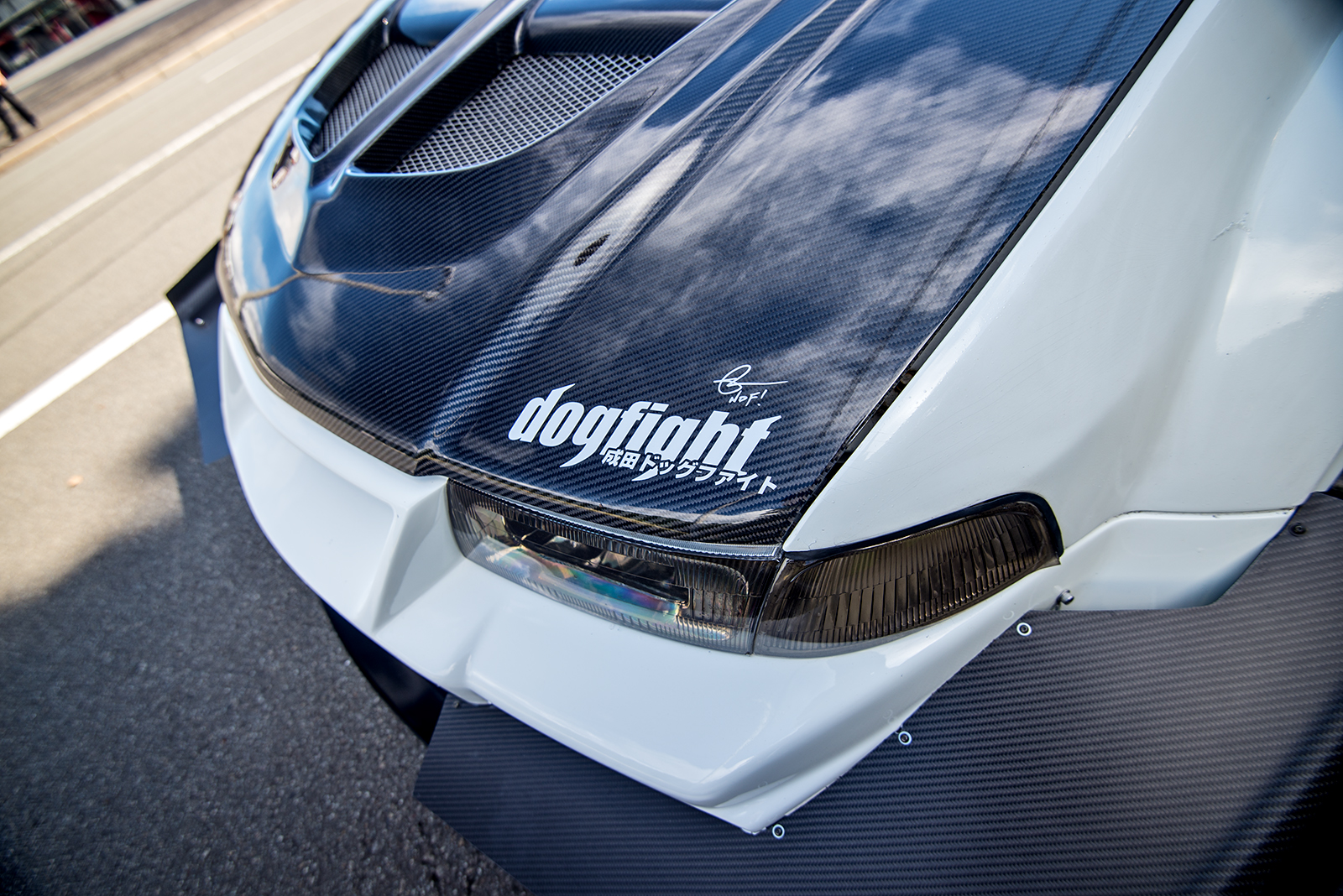 Of all the things I’ve done in my life, I never thought signing cars would be one of them.  It’s become a somewhat routine thing this past year though.  Also, I must say, this is my favorite placement for our logo.  I see a couple cars on Instagram with the decal placed there and it looks good on every car! 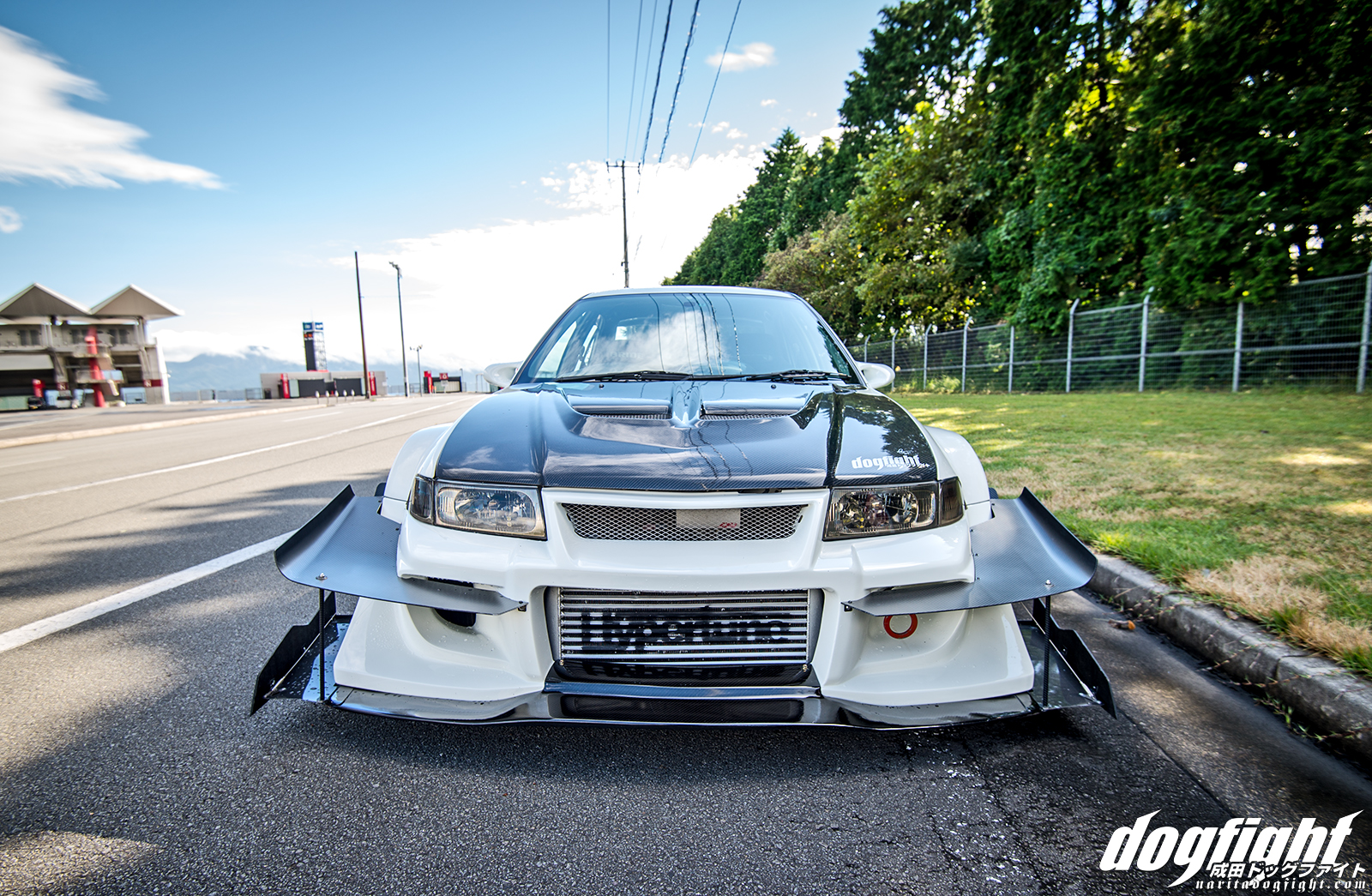 Just as aggressive up front, as it is in the rear.  What are looks good for if you can’t back them up with power, though?  Auto House Solid and Unlimited Works took the reins on building the powerful 4G63 underneath the Varis hood. 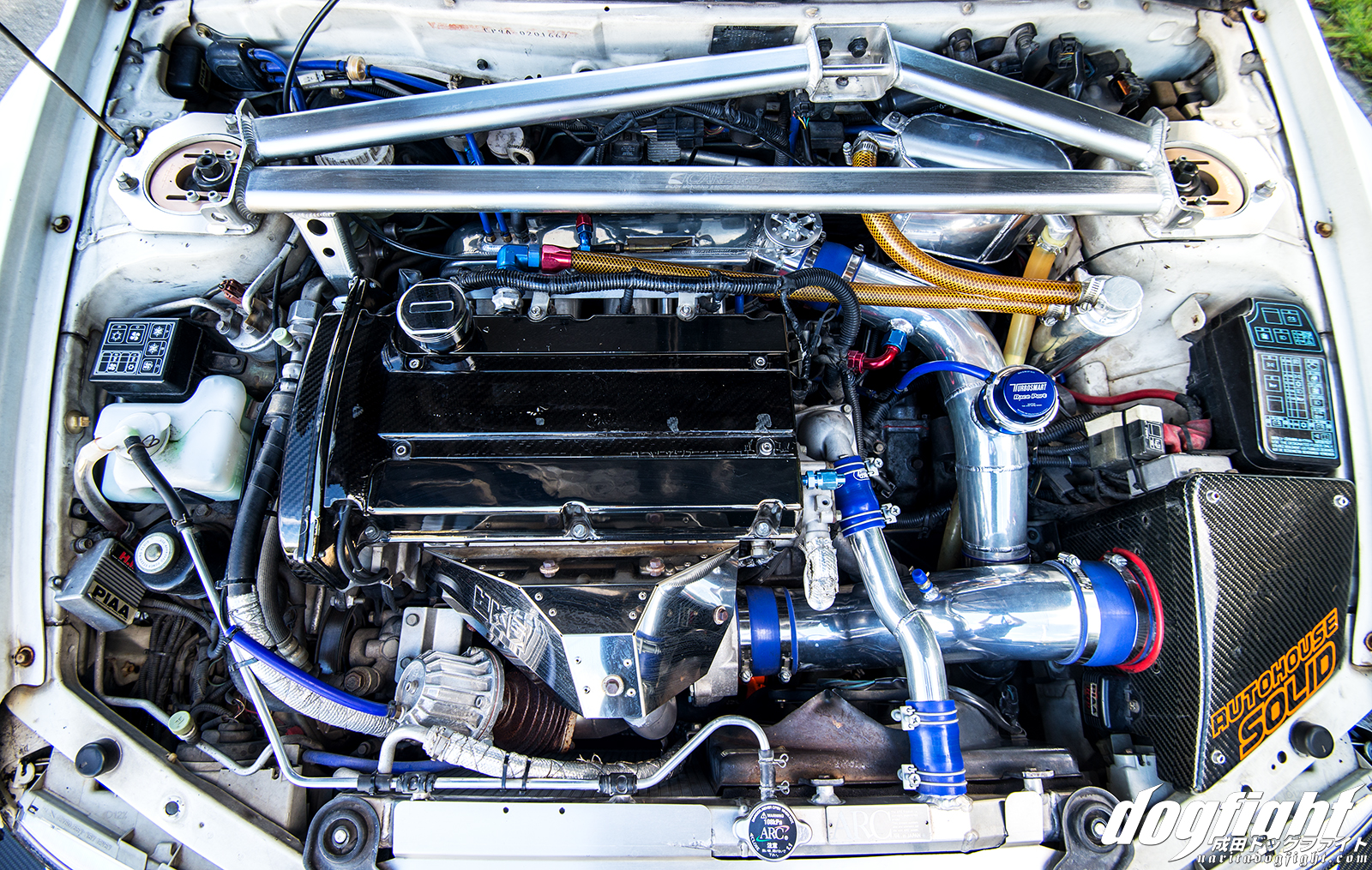 The tired motor has been refreshed with a 2.2 liter, Cosworth stroker kit, significantly bumping up the displacement.  A HKS GT3030 turbo provides the 1.6 bar of boost to get maximum output to the tune of 470whp.  An ARC intercooler and radiator keep the engine temps down to optimal temperatures.  The tune, provided by Unlimited Works, gives the motor plenty of leg room to reach 470hp without reliability being sacrificed. 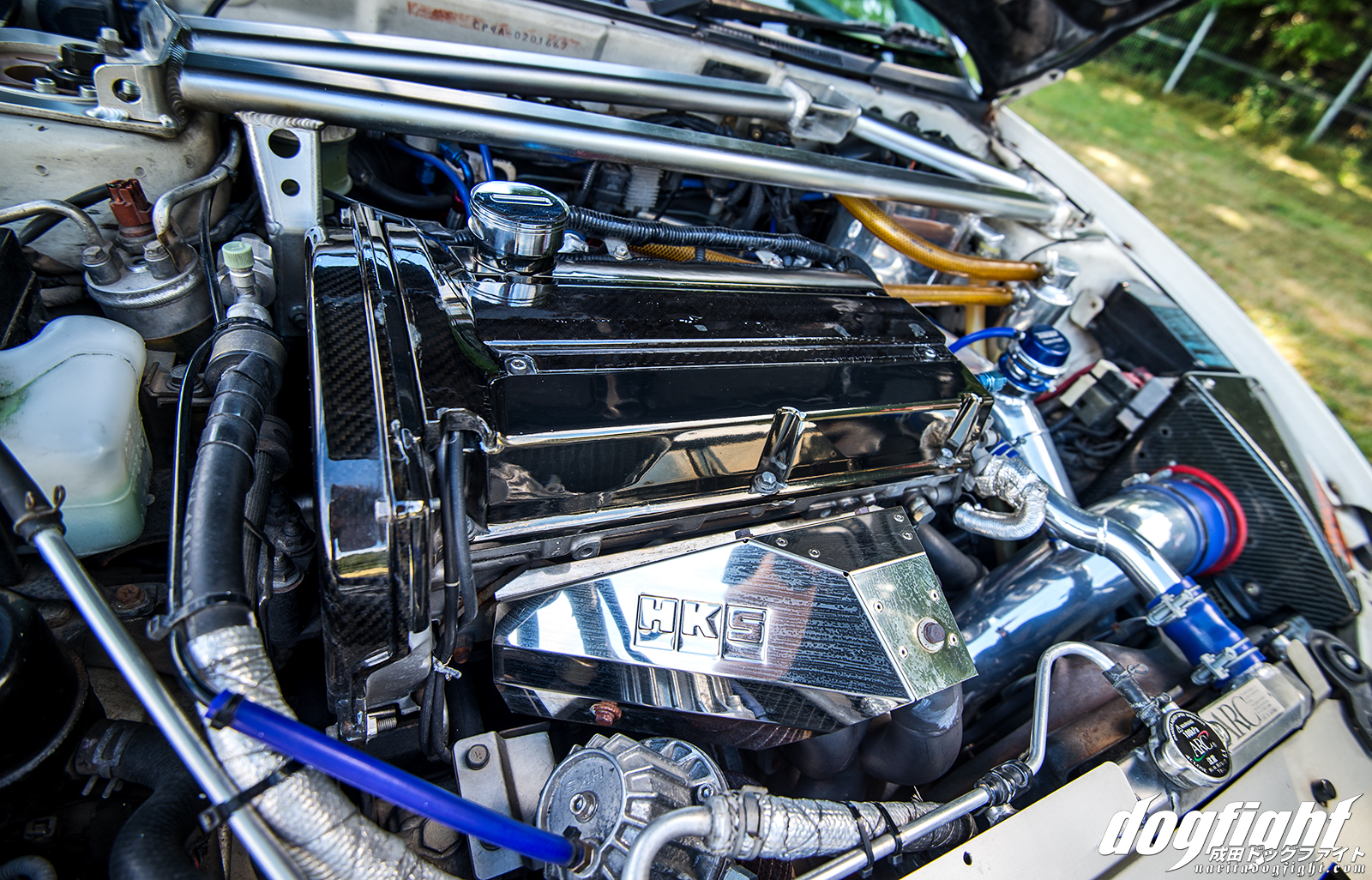 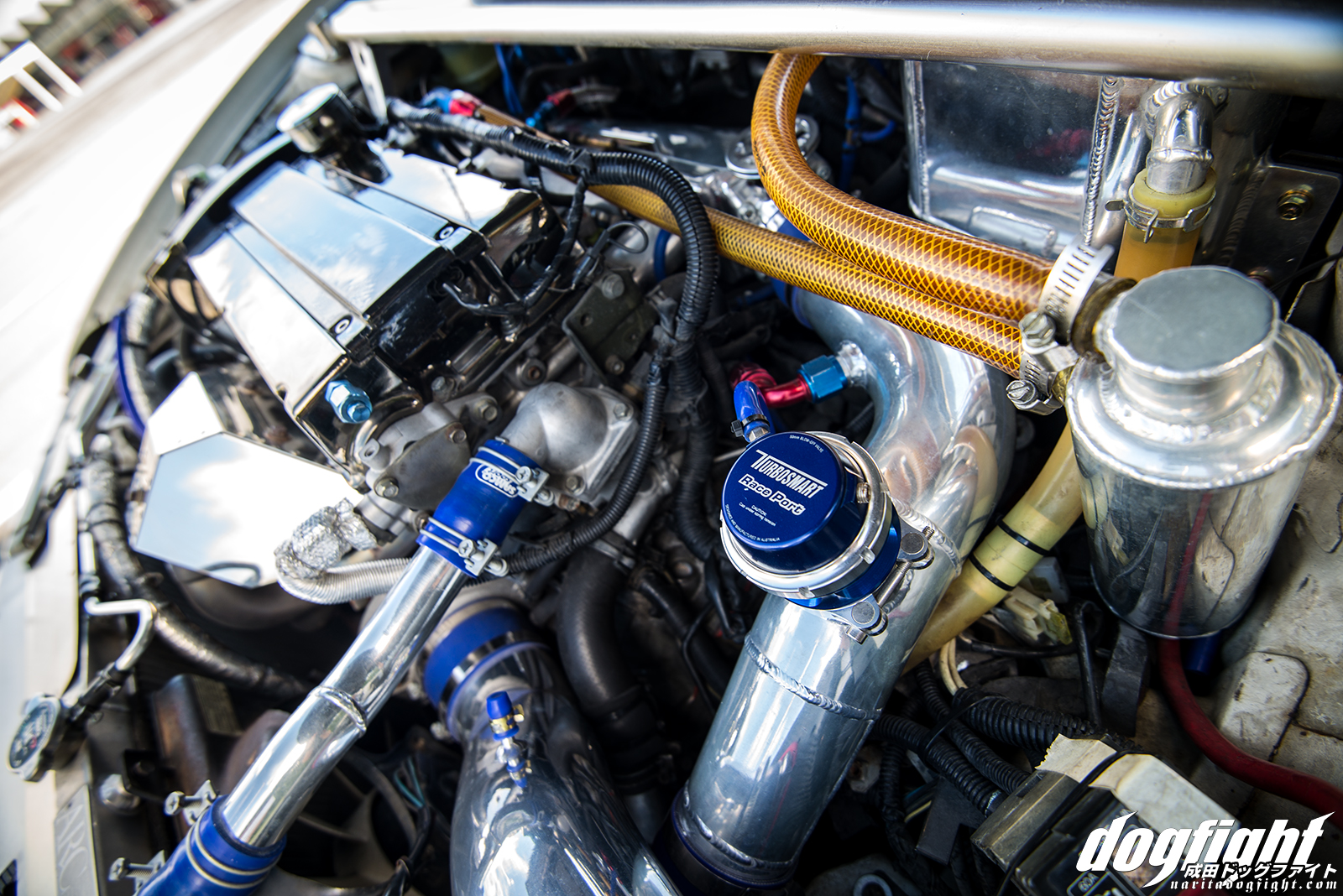 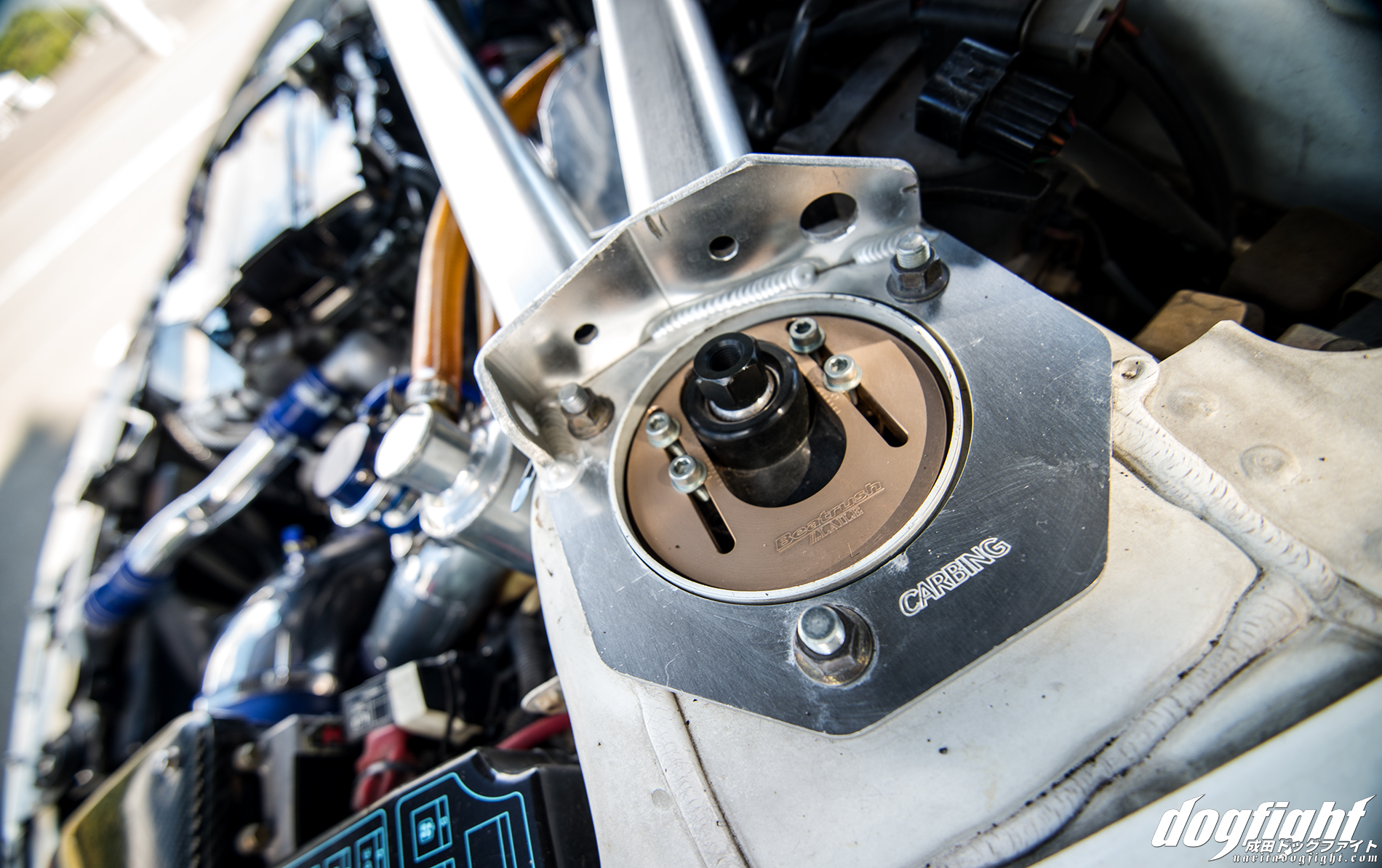 Inside the car, Morita takes a more relaxed approach to tuning. 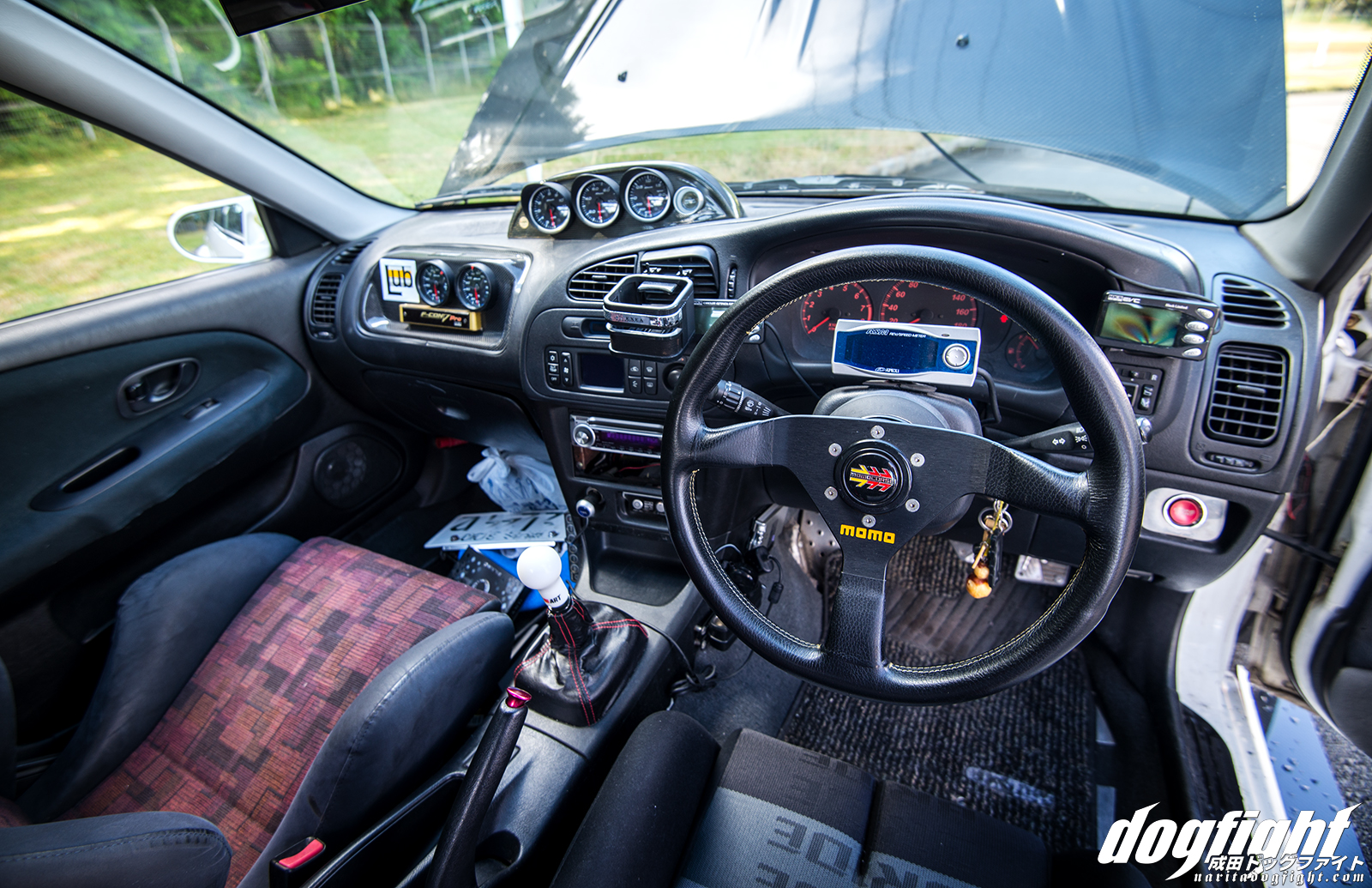 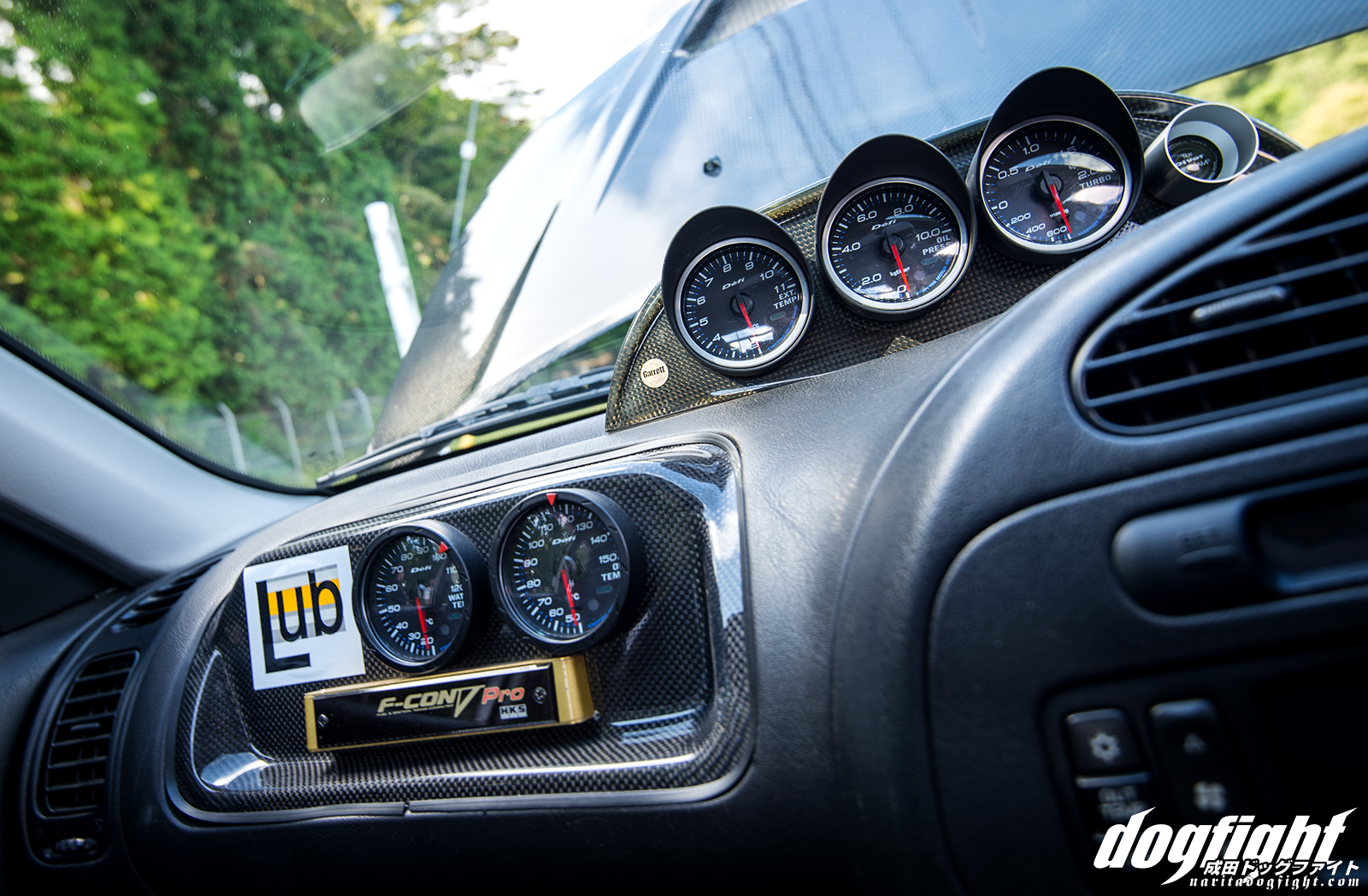 Carbon bezels house a variety of Defi gauges that monitor engine vitals.  The whole package is tuned with HKS  F-ConV Pro; a staple choice for engine management in Japan. 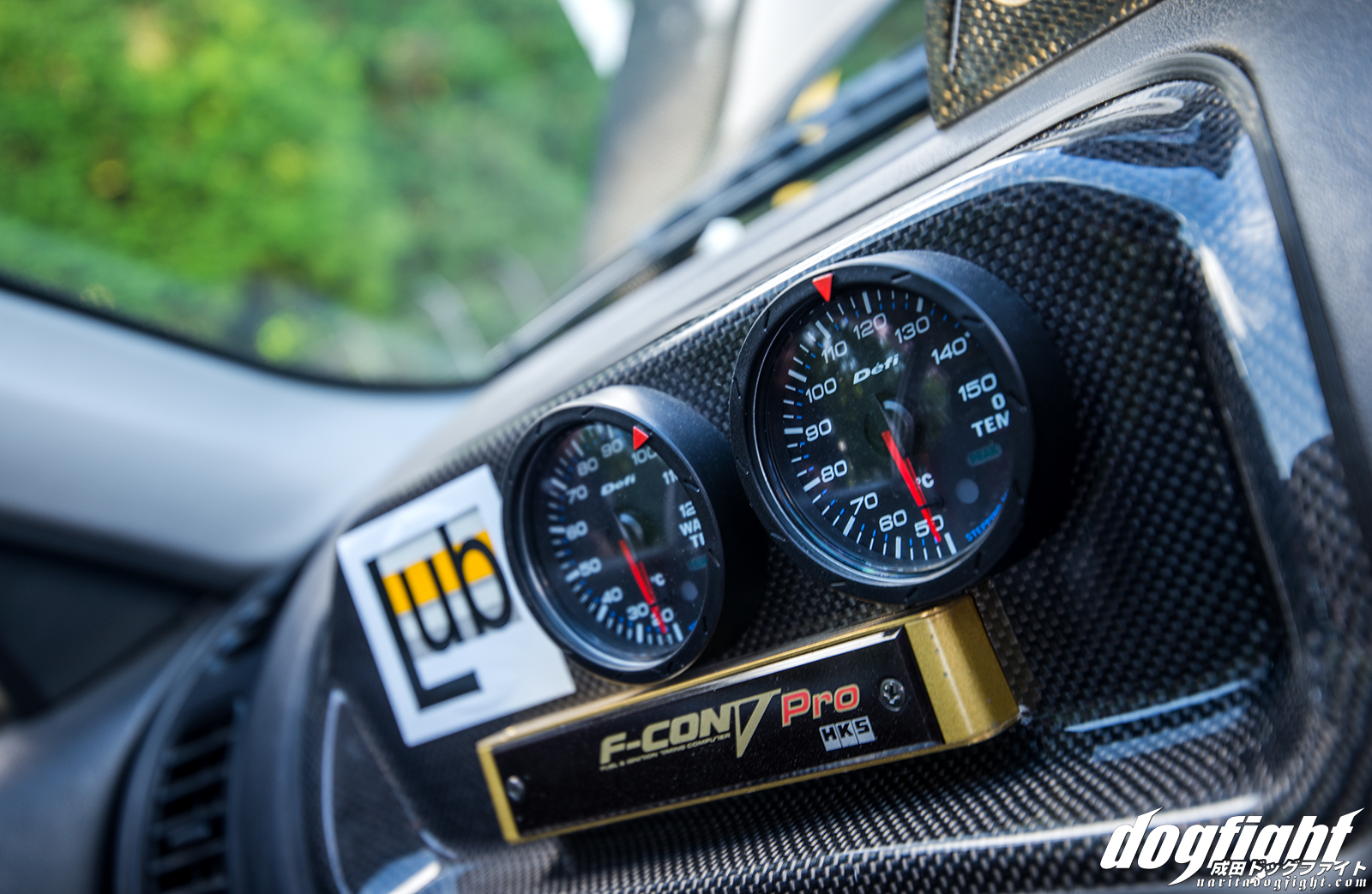 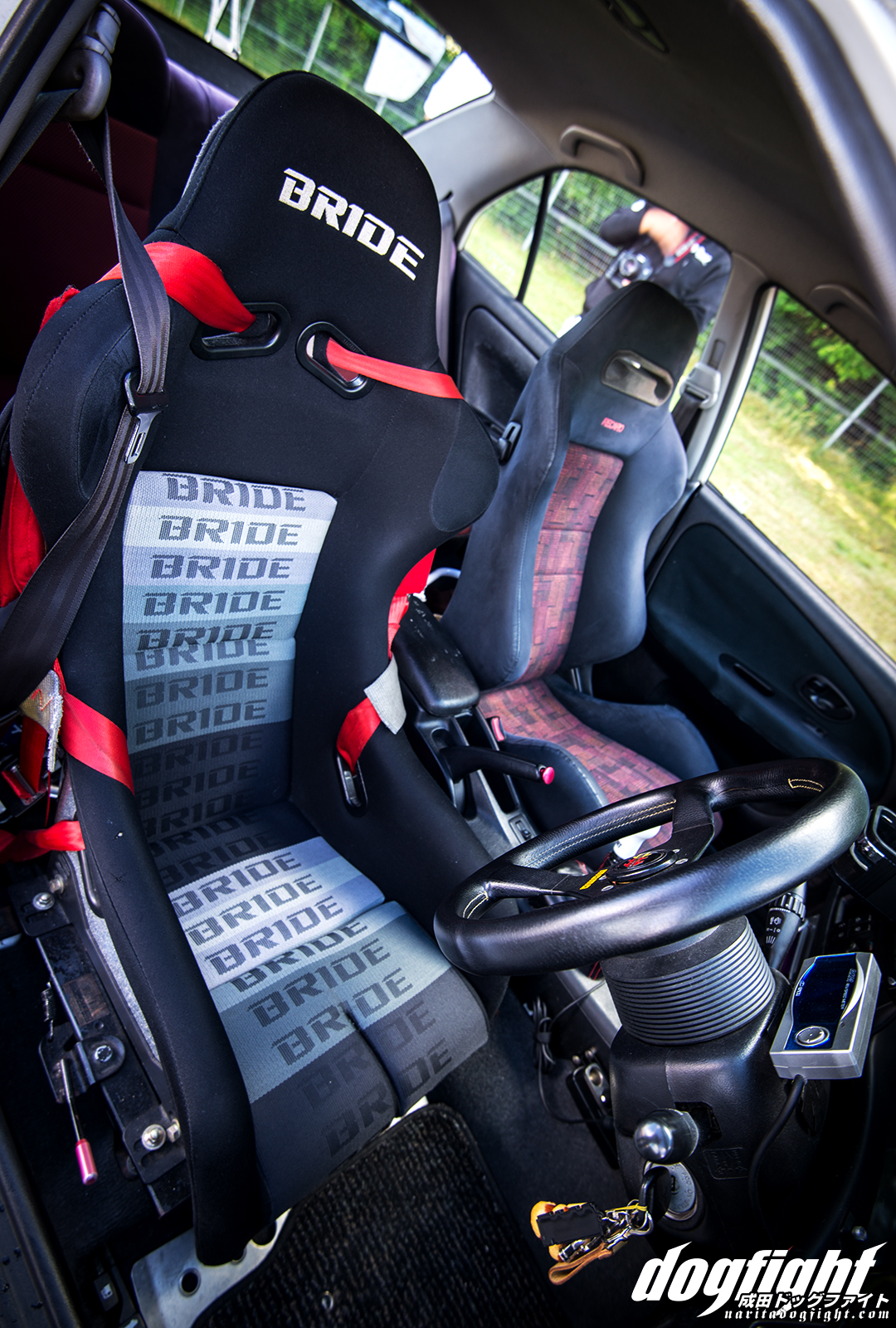 The OEM Recaro resides on the passenger side still, while Morita has replaced his office chair with a BRIDE Zeta III.  Having used a Zeta III myself for years, I can attest the good choice.  The interior of the car is untouched in comparison with the rest of the build; honestly I wish it was stripped, caged, and as minimal as possible.  This is still a dual purpose car though, and not everyone is capable of having means of towing a car to the track in Japan.  Honestly I’m surprised this thing still passes shaken (or does it? :)). 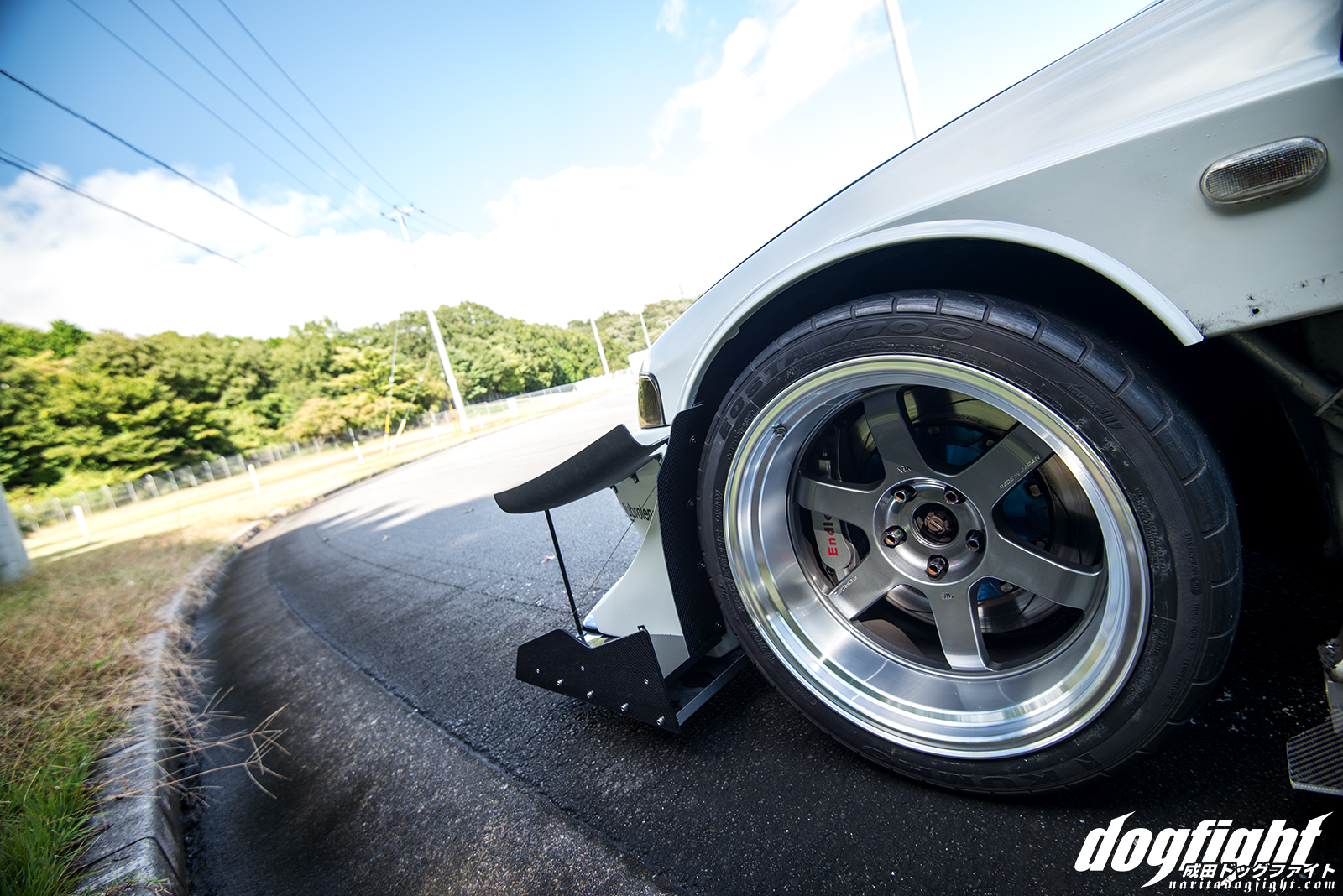 The build, taken in it’s entirety, is still one of my favorite CP9A’s in Japan.  Despite my disapproval for the amount of interior still left on that car, I truly do enjoy the car.  Meeting Morita-san was a lot of fun; he’s a very funny, and nice guy that takes just seconds to befriend. 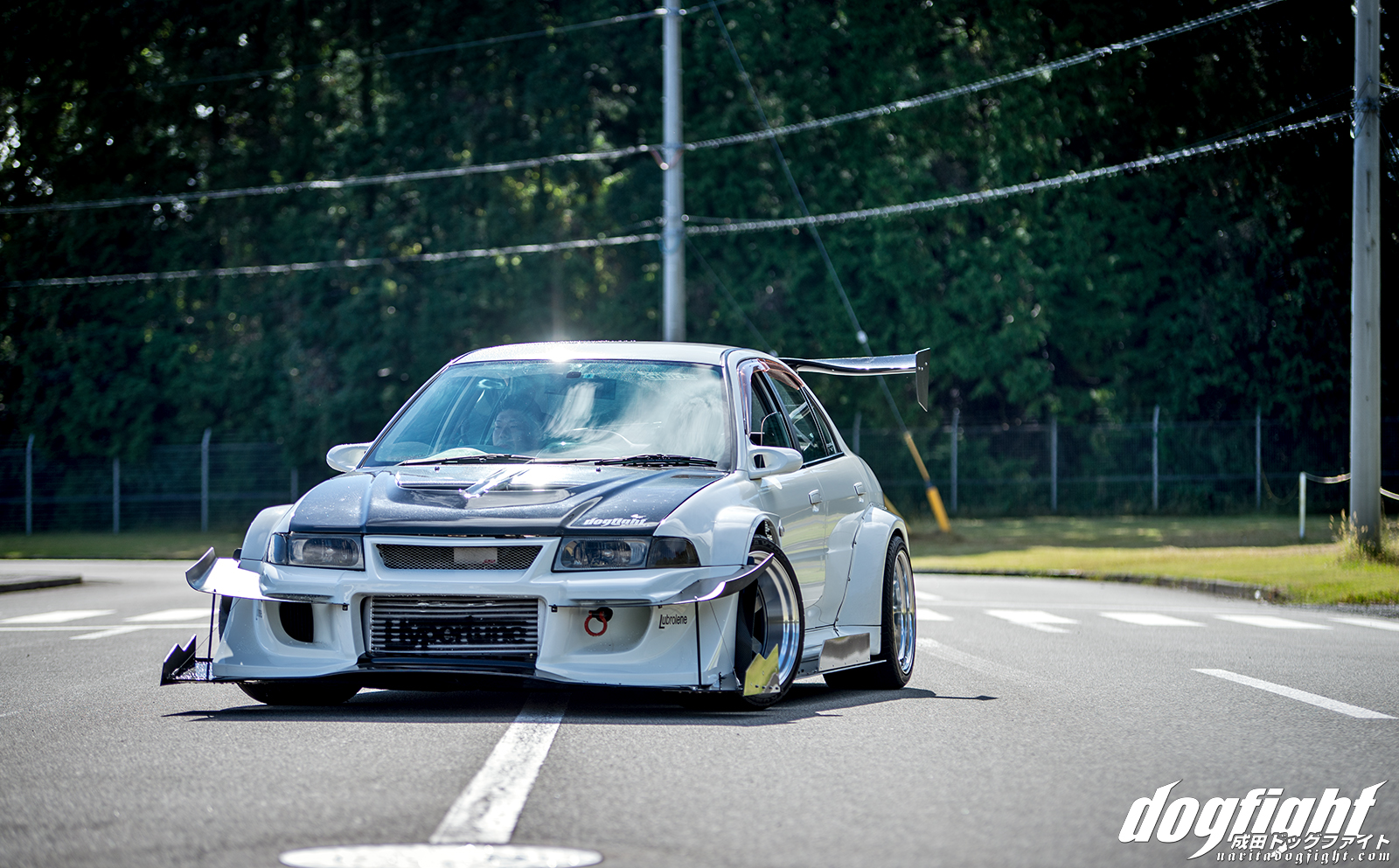 With a best time of 1’00.1 around Tsukuba’s TC2000 proving grounds, he stands on the cusp of joining the under one minute club.  When he does, it’s safe to say I’ll only like the car even more.