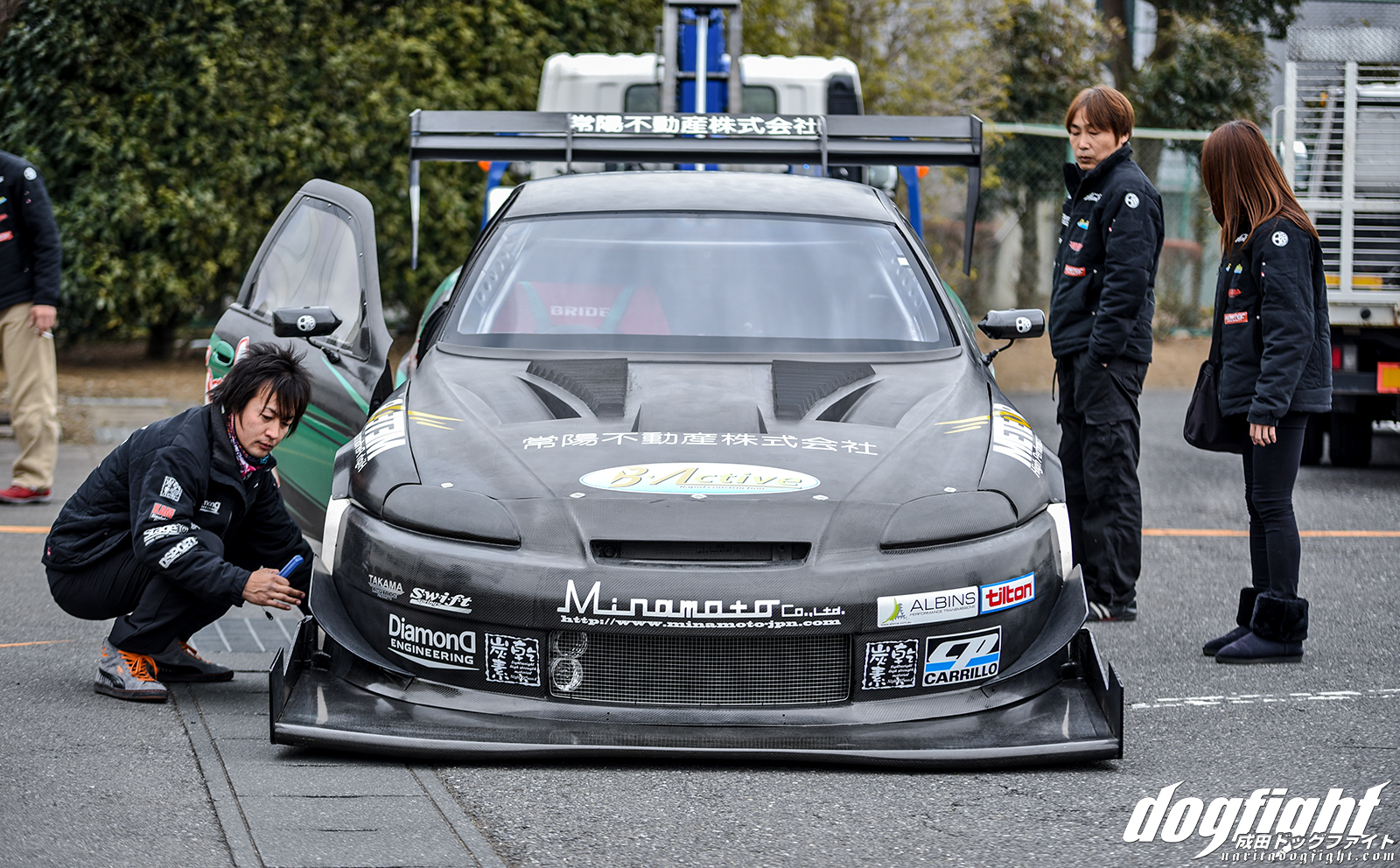 Without a doubt the most interesting thing for me, in following Japanese Time Attack so closely, is getting to see the progression of builds over an extended period of time.  We all know that building a race car isn’t a quick task, and for most people at the grassroots level it’s a trial and error procedure; you find out what works and what doesn’t from your initial base, and head back to the drawing board after each event.  Everyone has their own method of going about this, but the common goal for everyone, however, is to go faster.

I typically see two categories of drivers at events; those that enjoy driving the same build year after year, enjoying the consistency and opting to improve themselves as drivers before delving into a full-on race car build.  These are usually the drivers who own street registered cars that sometimes need to take on daily driving duties.  Then you have the drivers that are fully dedicated to the sport.  These are often your shop owners, employees, and organizers of the events.  People whose lives have been whole-hardheartedly committed to pushing the sport to it’s limit.  These quite frankly, are the one’s whose livelihood depends on their success.  They shelter themselves away in their shops, working tirelessly during the off-season, engineering new ways to improve their lap times for next year.  Their cars generally show up for season testing looking completely different than their previous versions, with different attributes both visible and unseen equipped to propel them into new records.  The events in Japan are very entertaining because of the co-mingling of these two groups, and it’s always exciting to see who has taken the next step in tuning their platforms.

The driver of the AutoBahn JZZ30, Kunihiko Bando, has proven himself to be a member of the latter group; and with a base like the Soarer, you kind of have to be.  While it’s surprisingly aerodynamic shape may seem fit for a race car, keep in mind it was originally built to be a semi-luxury grand tourer and as a result, started out rather hefty.  The AutoBahn group took on the project back in 2009; nearly 8 years ago today.  I could simply say that the car is visually no where near what it used to be, but the modifications to this car go much deeper than simple aesthetics.  AutoBahn, with the help of a select few outfits, have taken this Soarer to heights never before reached with a chassis like this. 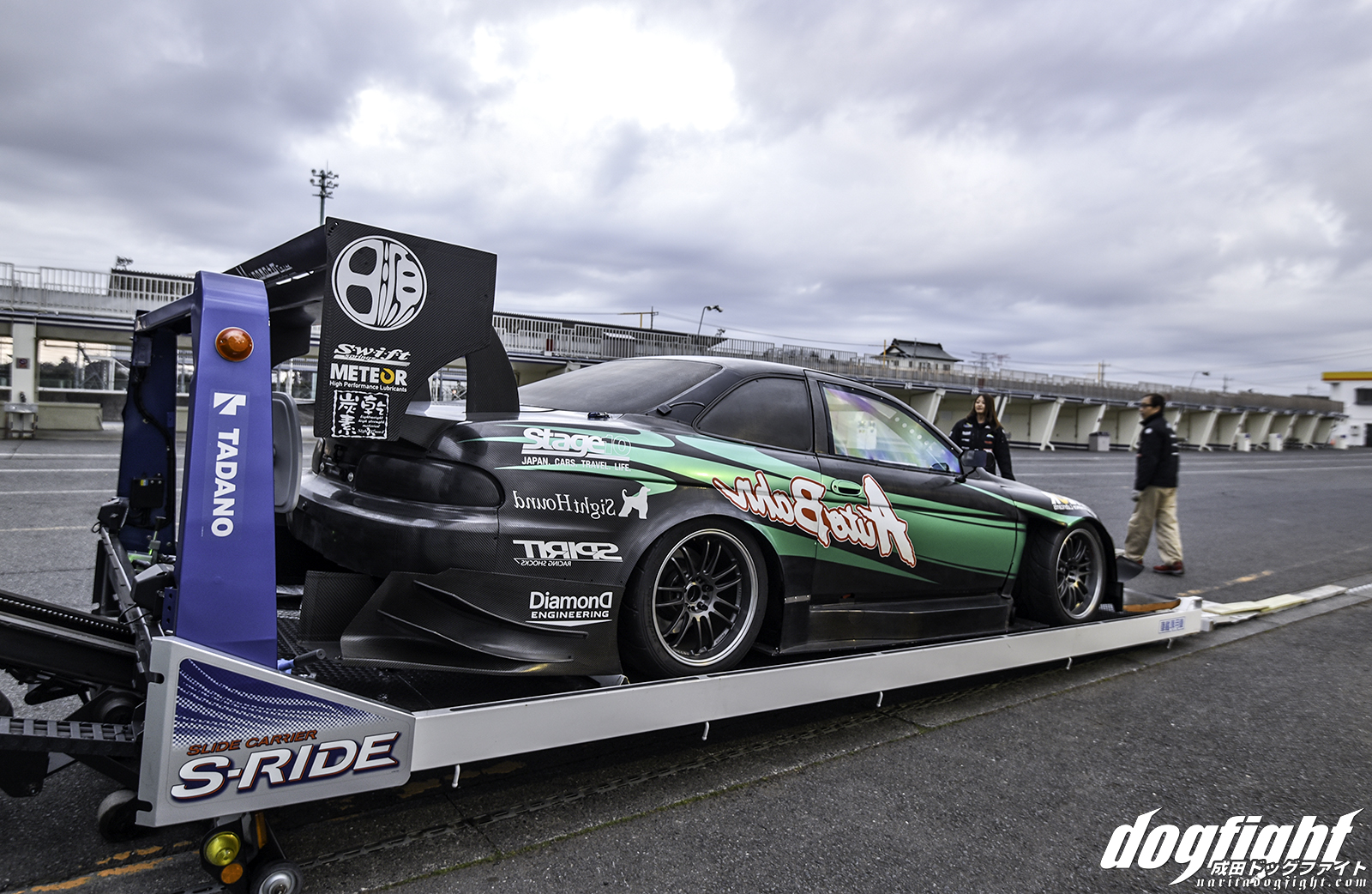 Early morning at Tsukuba, the AutoBahn crew offloads the car and positions it in the paddock to begin the self-tech session. 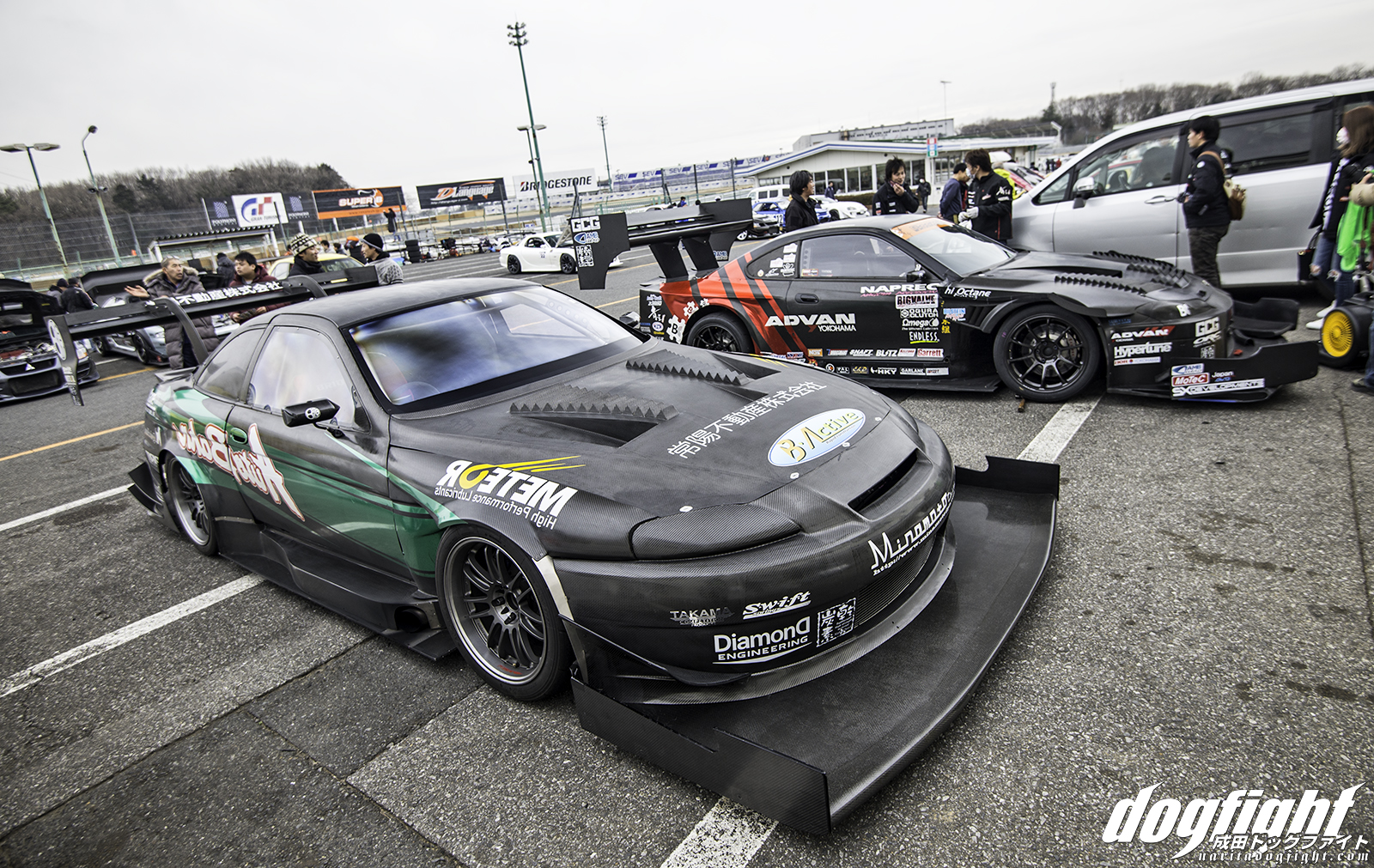 Taking a spot next to Suzuki’s iconic Scorch Racing S15, the two easily steal the show.  AutoBahn, similar to Scorch, enlisted the assistance of Sight Hound; the dry carbon experts that handle Suzuki’s carbon needs exclusively.  The Soarer’s new body panels are made entirely of autoclaved, dry carbon and are a huge part of why the car weighs in at a mere 1180 kilos.  Taking into account the OE curb weight of one of these things is almost 1600 kilos, that’s some impressive weight reduction. 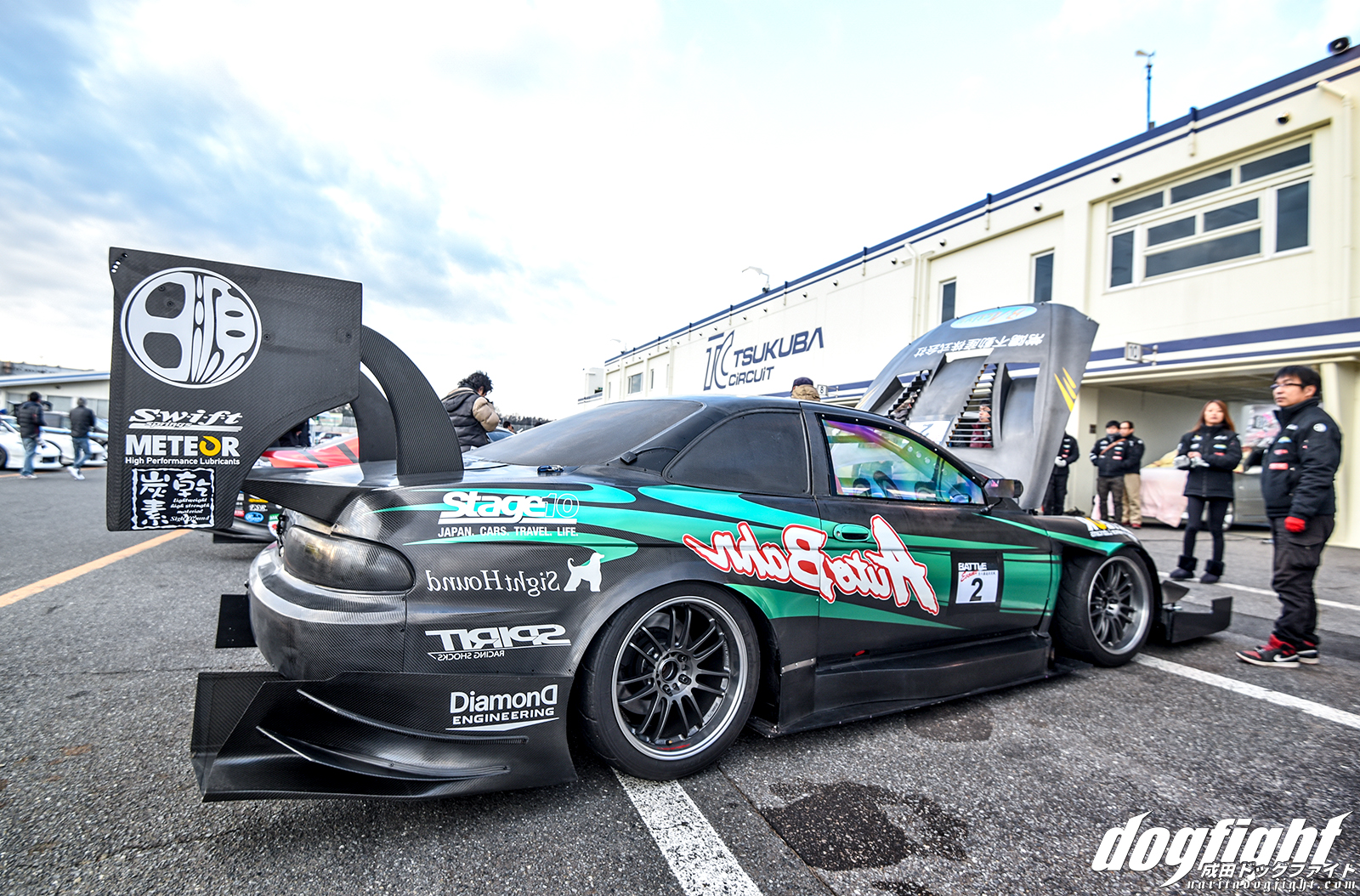 The livery has been redone in a very prominent greenish chrome that stands out on the carbon panels. The widened side skirts have been incorporated to the carbon flat bottom that, in addition to the massive rear diffuser and front splitter, give the coupe an abundance of usable downforce. 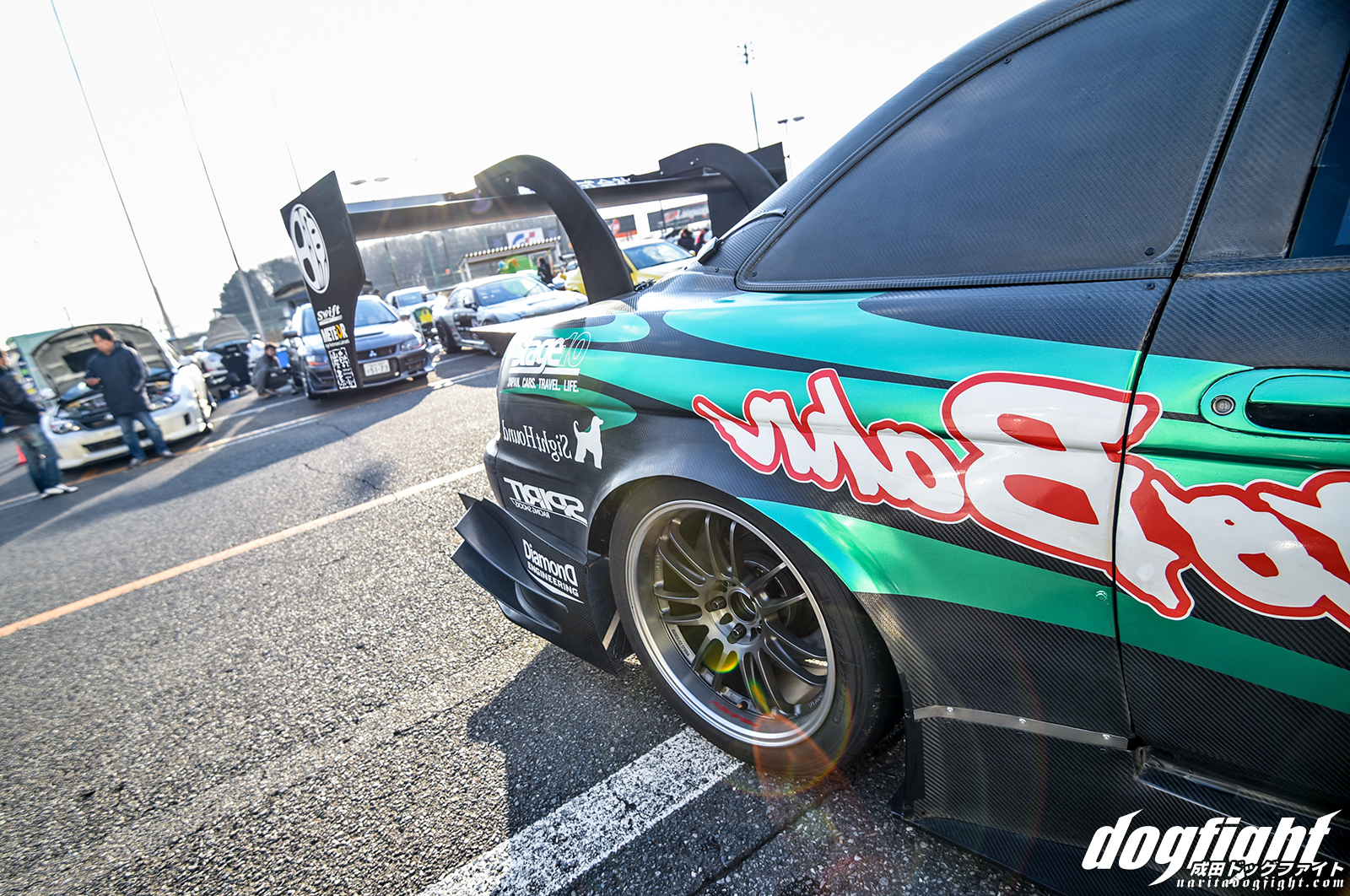 The Soarer is in itself a pretty long car.  The extensions from both front and rear give it a very elongated look from the sides. 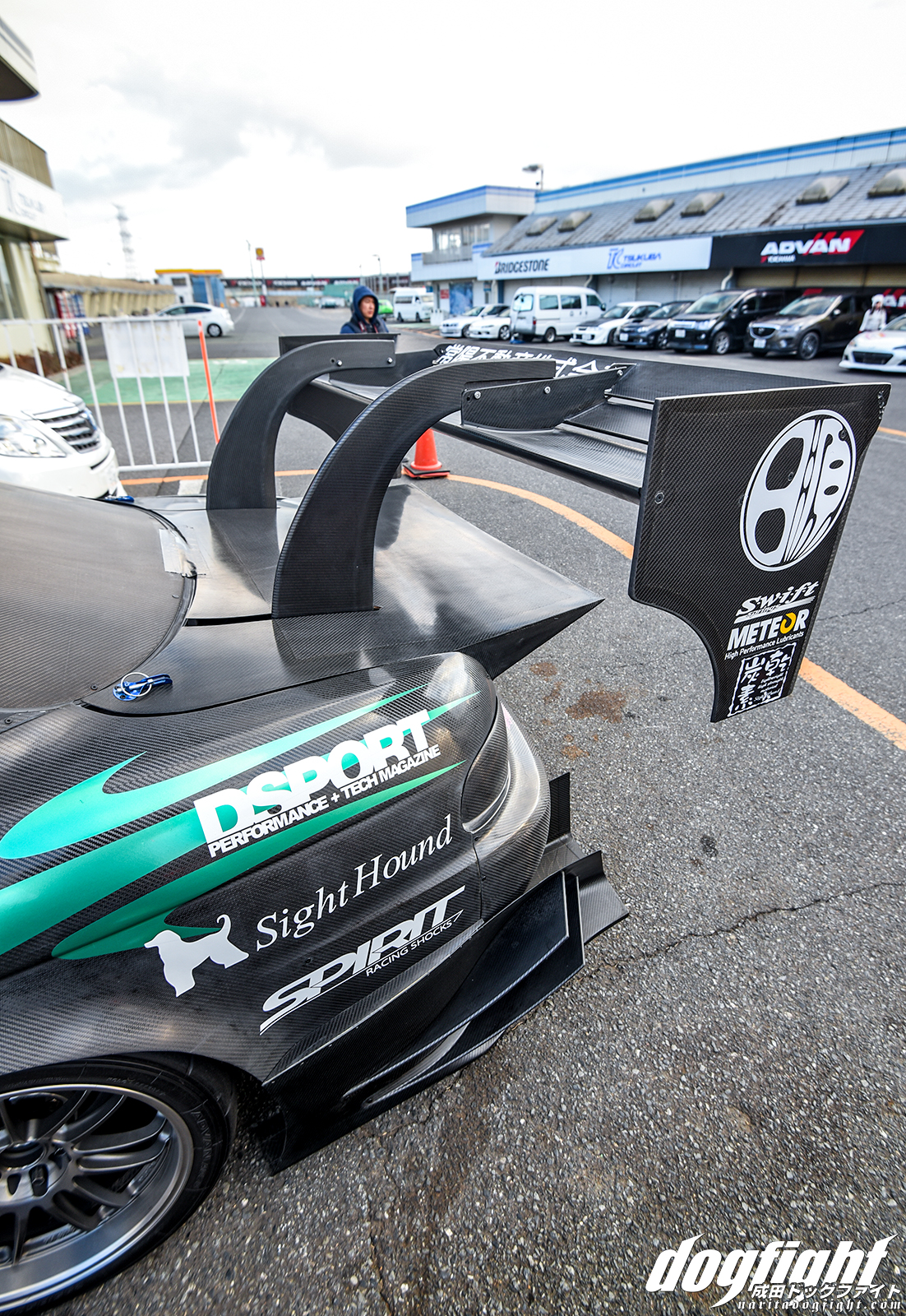 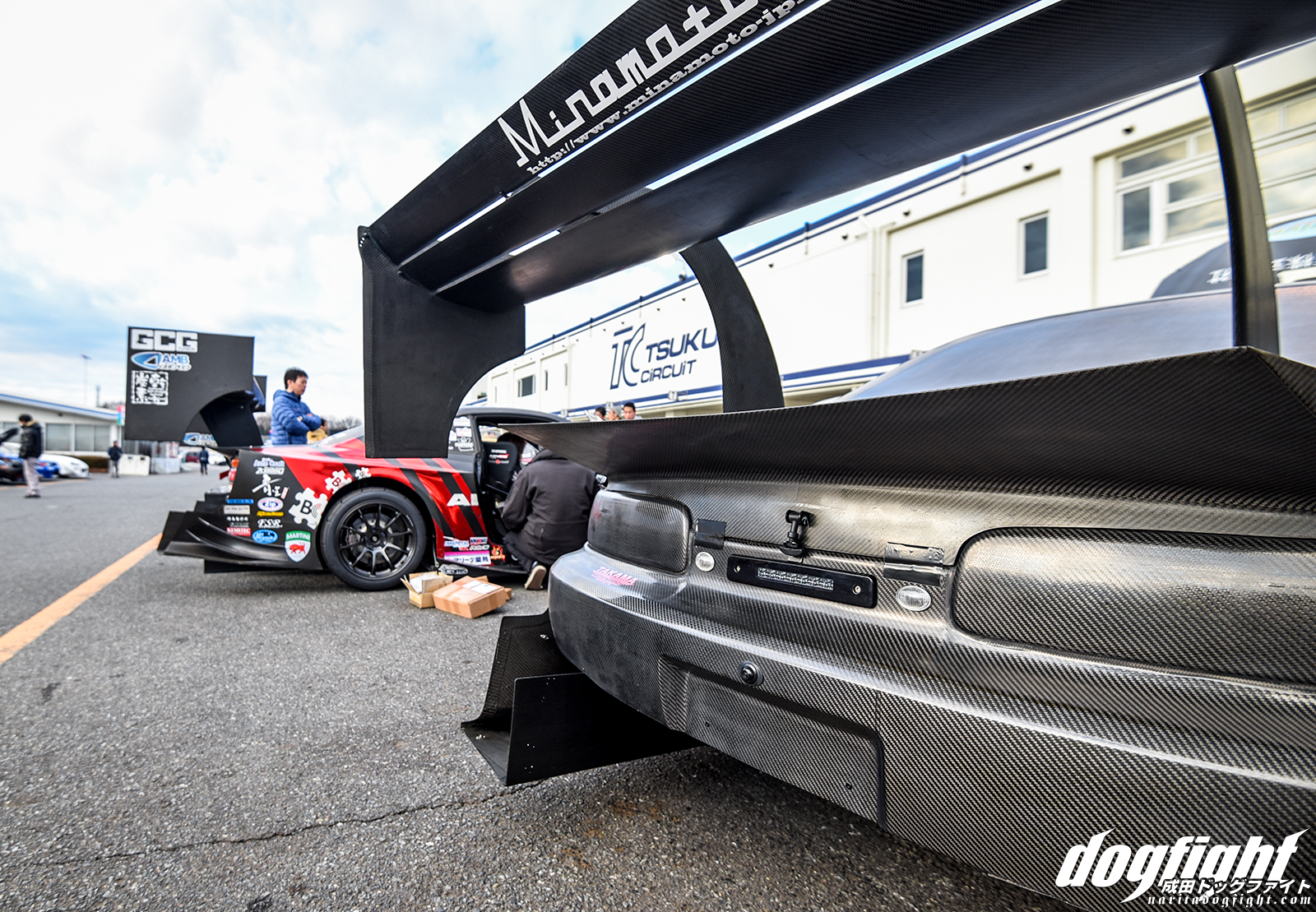 Even the taillights got the carbon treatment, and have been replaced by a single red LED mounted in the center of the rear bumper. A rear camera is mounted just above where the license plate would be to give Kunihiko the visibility he needs. 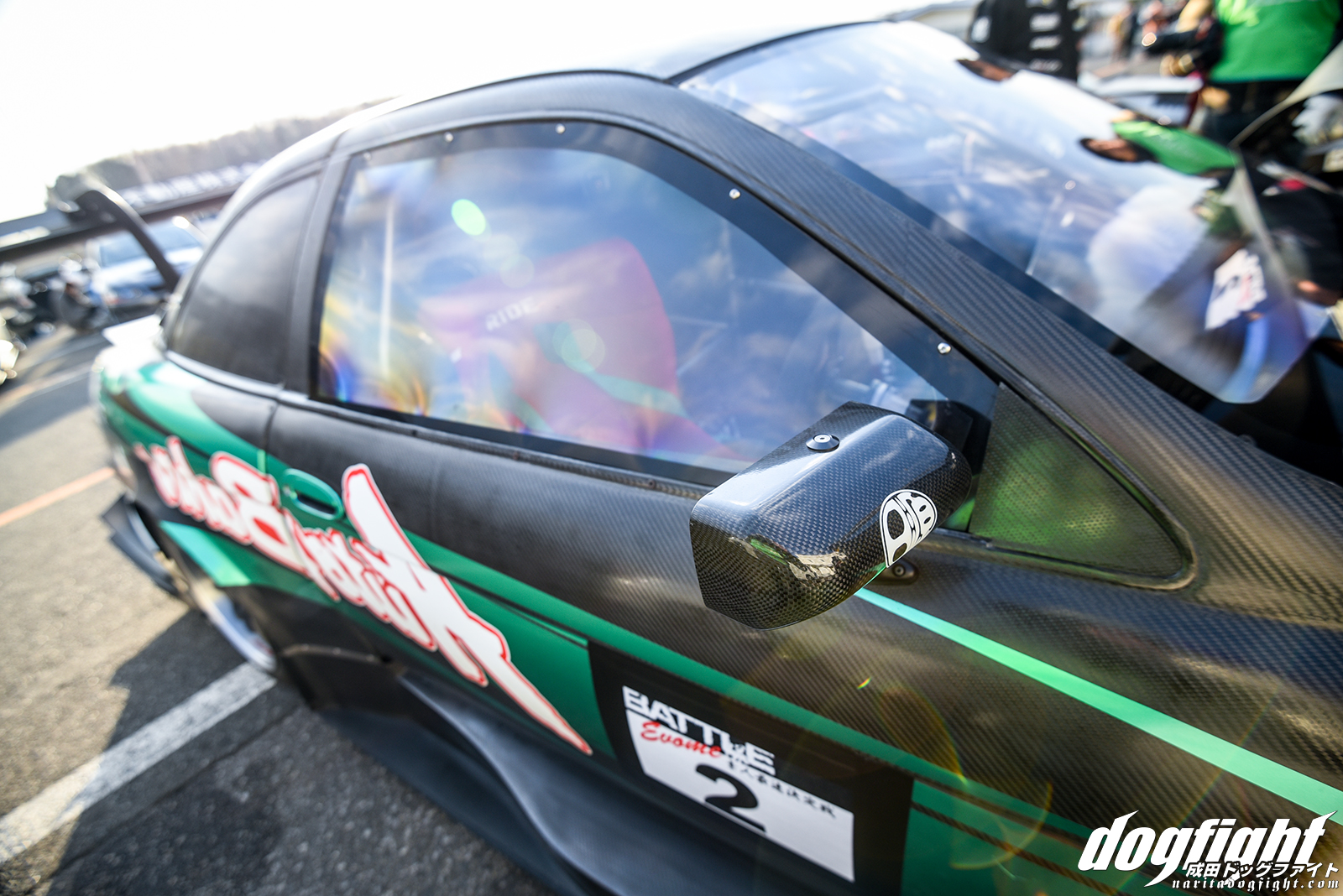 What can’t be replaced with carbon has been swapped out for Lexan (save for the windshield).  Craft square mirrors grant him access to see to the sides of the car on track, and tie in the continuing theme of carbon fiber. 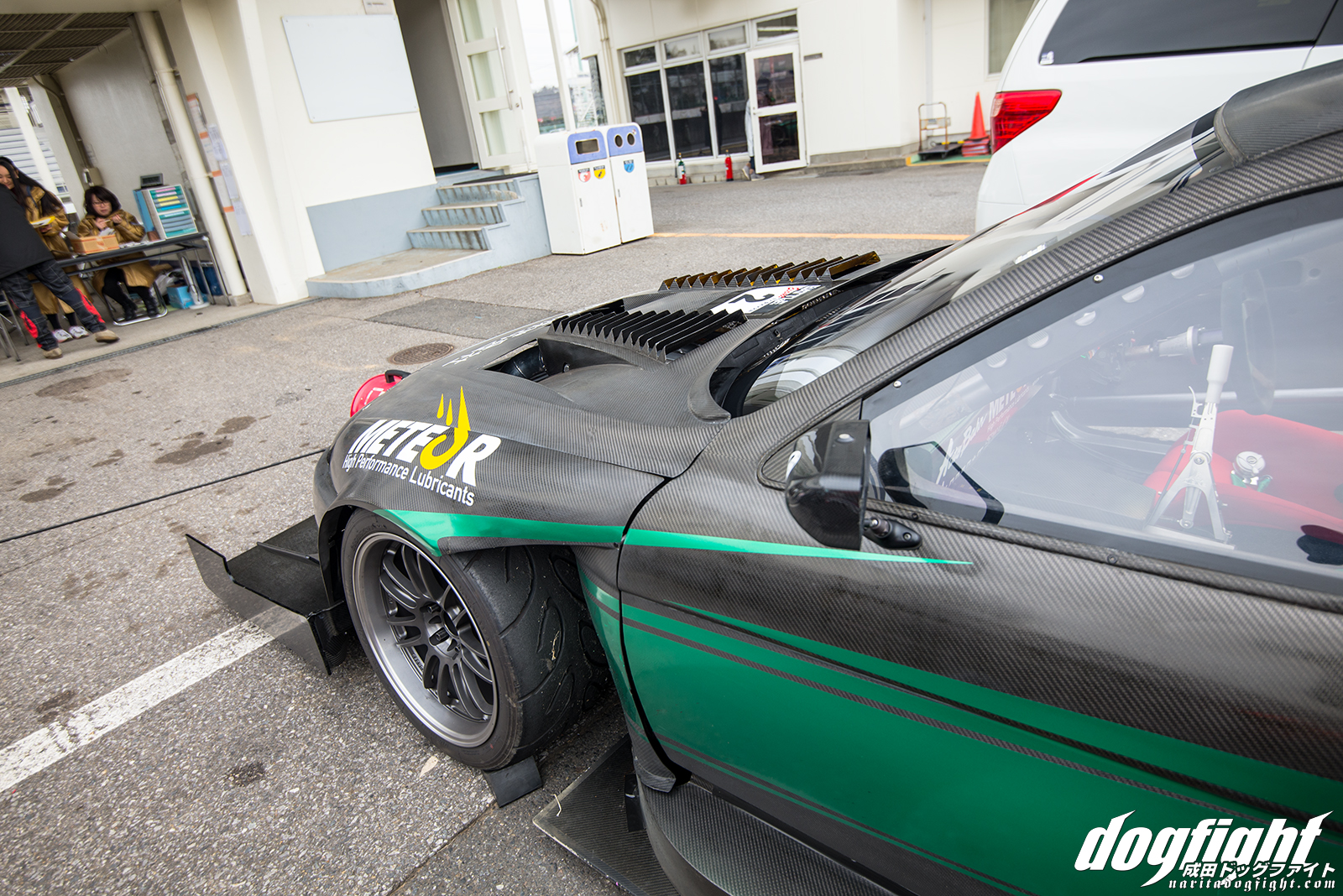 The vented hood helps heat escape from the engine bay, provides an increase in aerodynamics, and looks simply awesome. 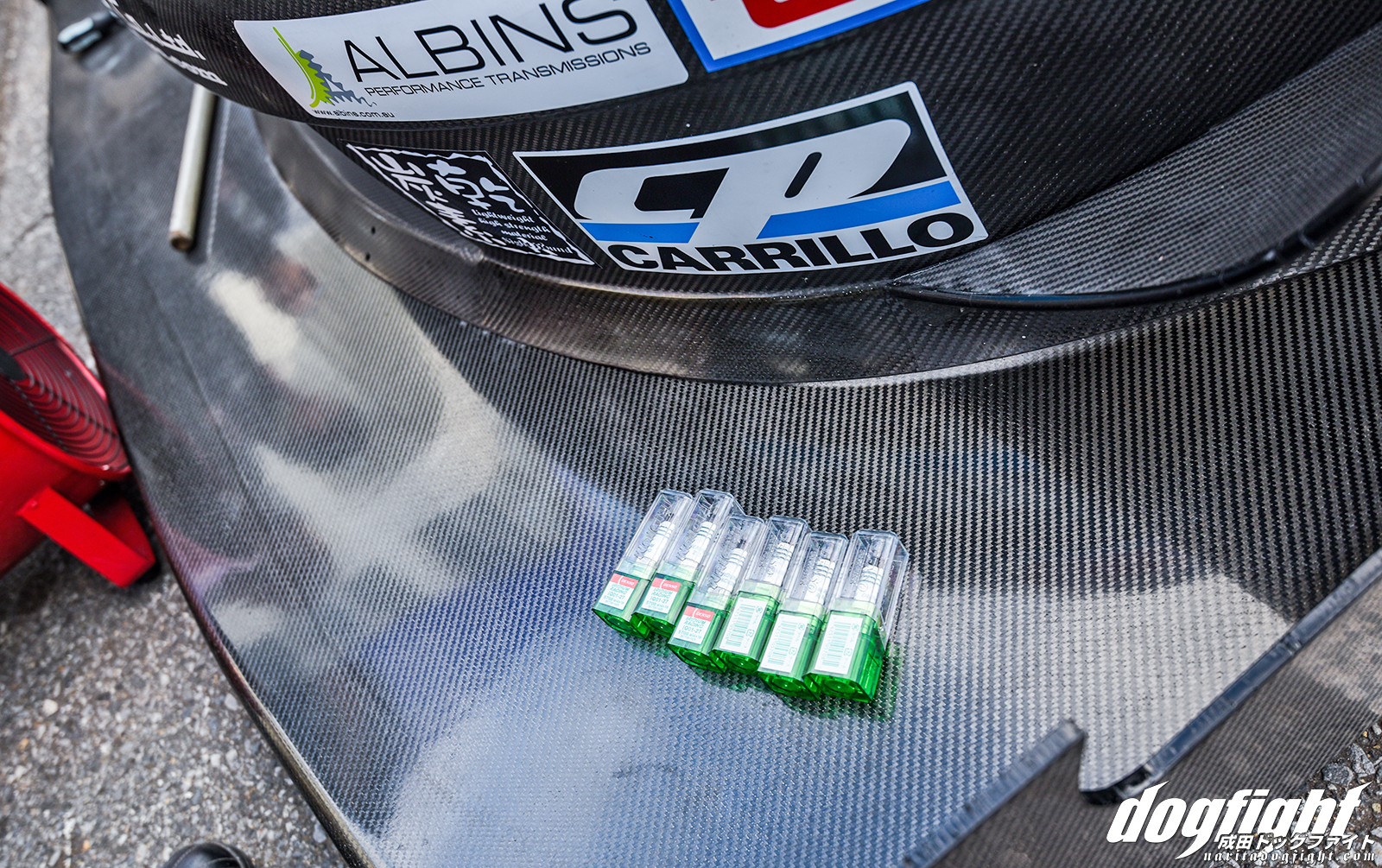 Front splitter doubles as tool tray in the paddock.  The crew had been tackling engine trouble throughout the morning and had this fresh pair of spark plugs laid out to be swapped in. 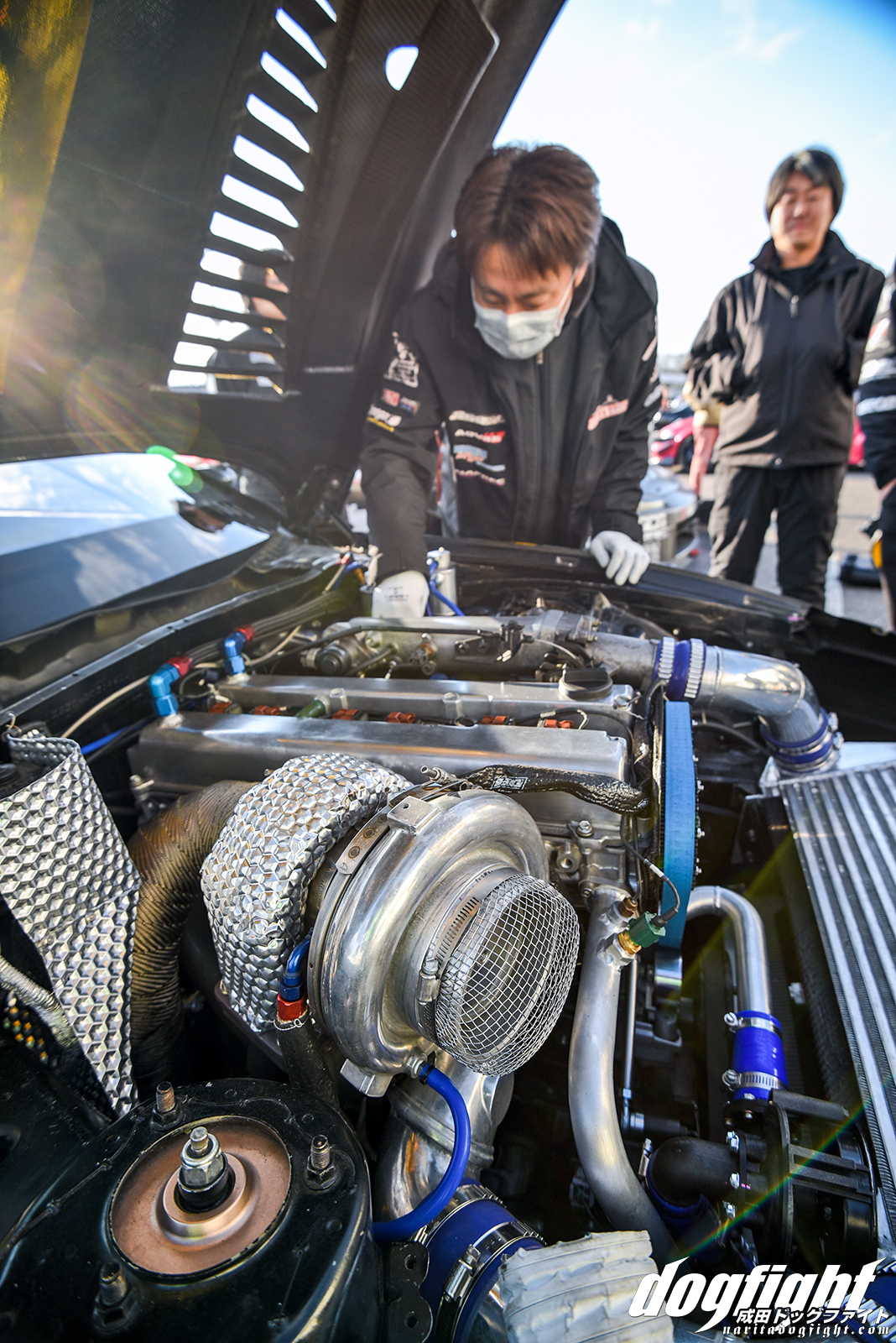 The motor which features a 1JZ head mounted to a 3 liter 2JZ block now pumps out a massive 900ps+ thanks in part to the Garrett GCG Turbine.  Full HKS internals and forged pistons are a necessary ancillary modification to allow the engine to pump out nearly four figure power. 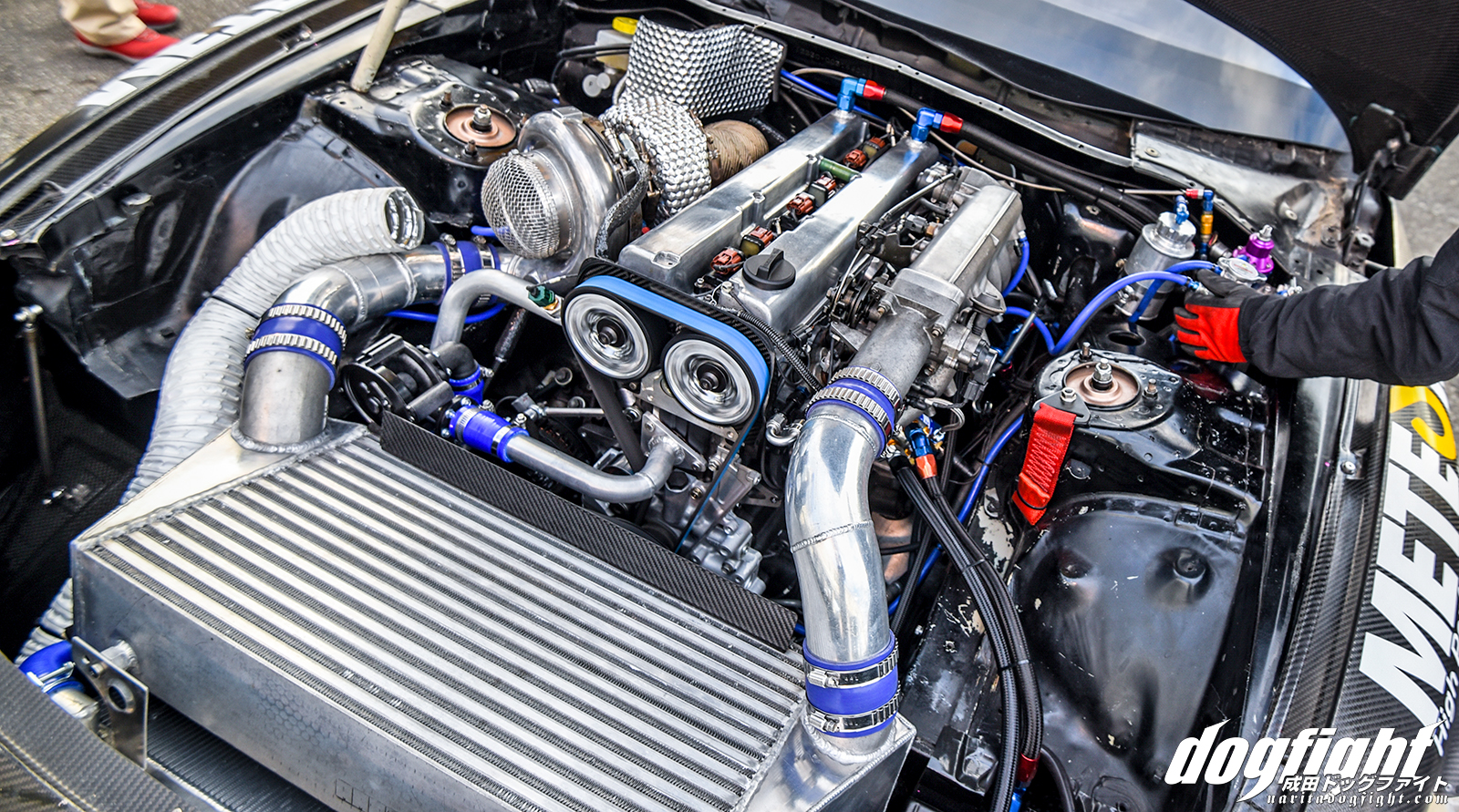 New for this season is the almost horizontally mounted and fully ducted intercooler and radiator setup.  As you can imagine, this engine setup requires a lot more cooling than your average build so new cores had to be made from scratch to accommodate. 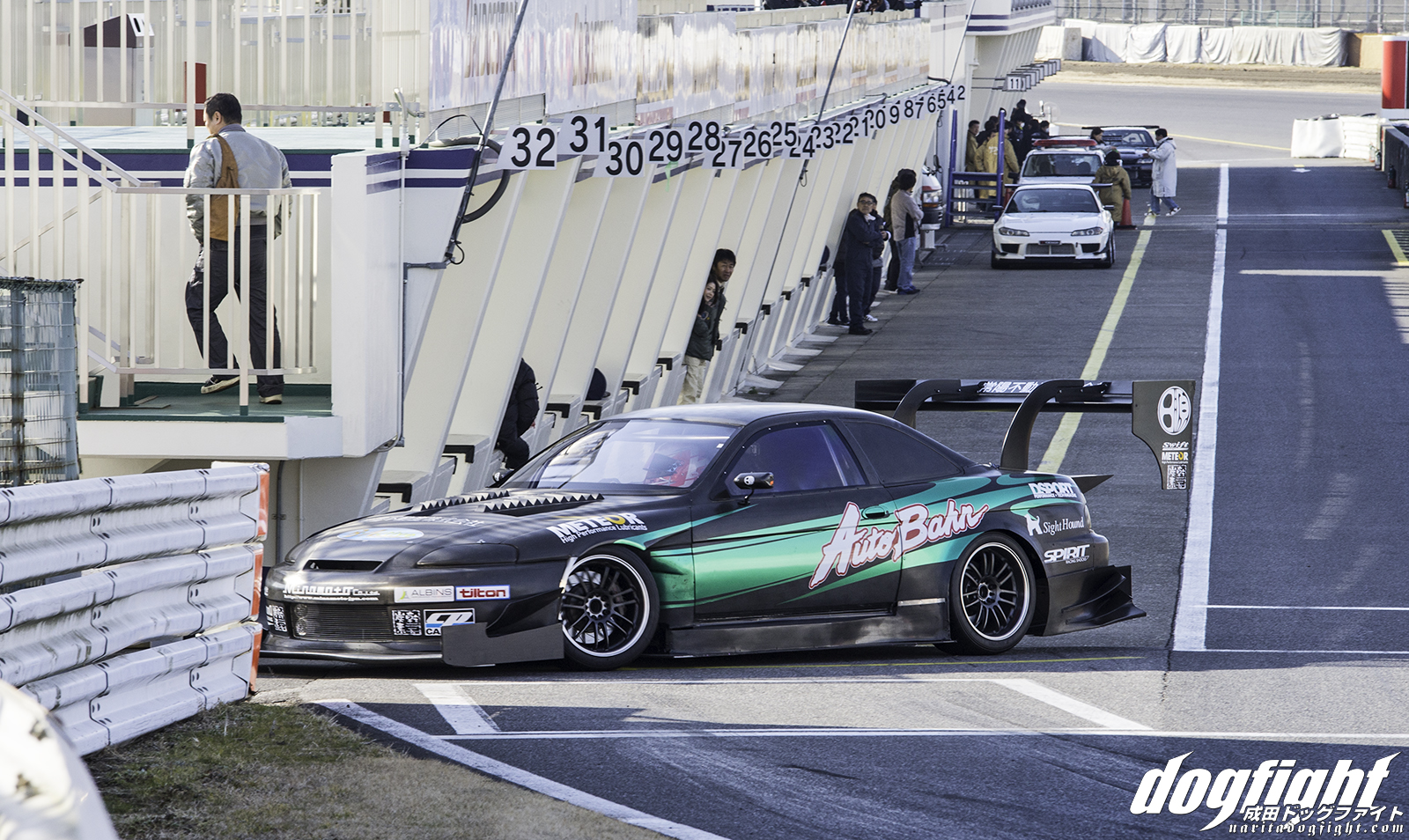 The day was off to a rough start on Kunihiko’s first go, and he immediately returned to the paddock after simply driving down the hot pits. 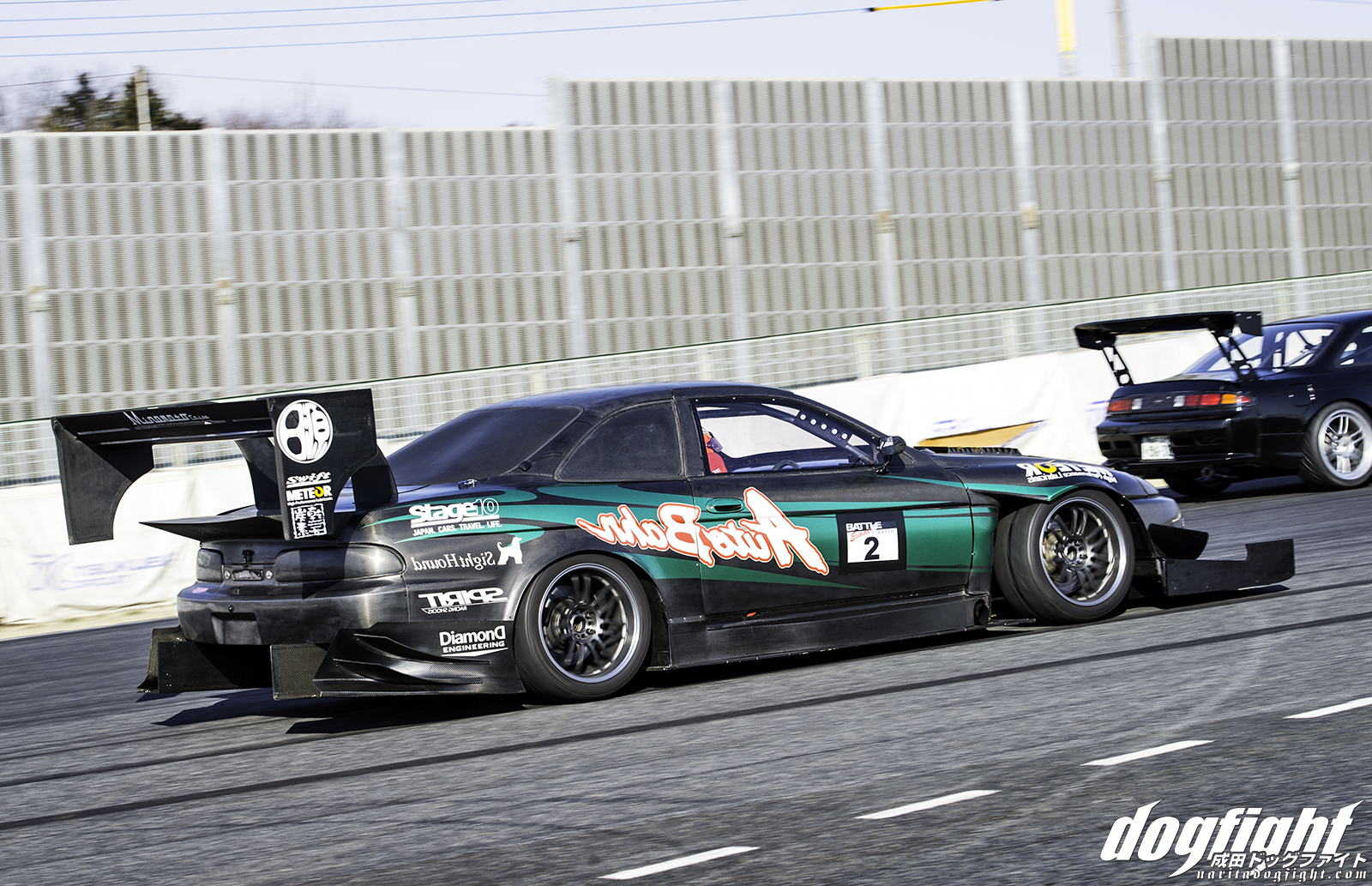 That didn’t stop the team from giving it their all though.  Soon the Soarer was back on track gunning for a new PB. 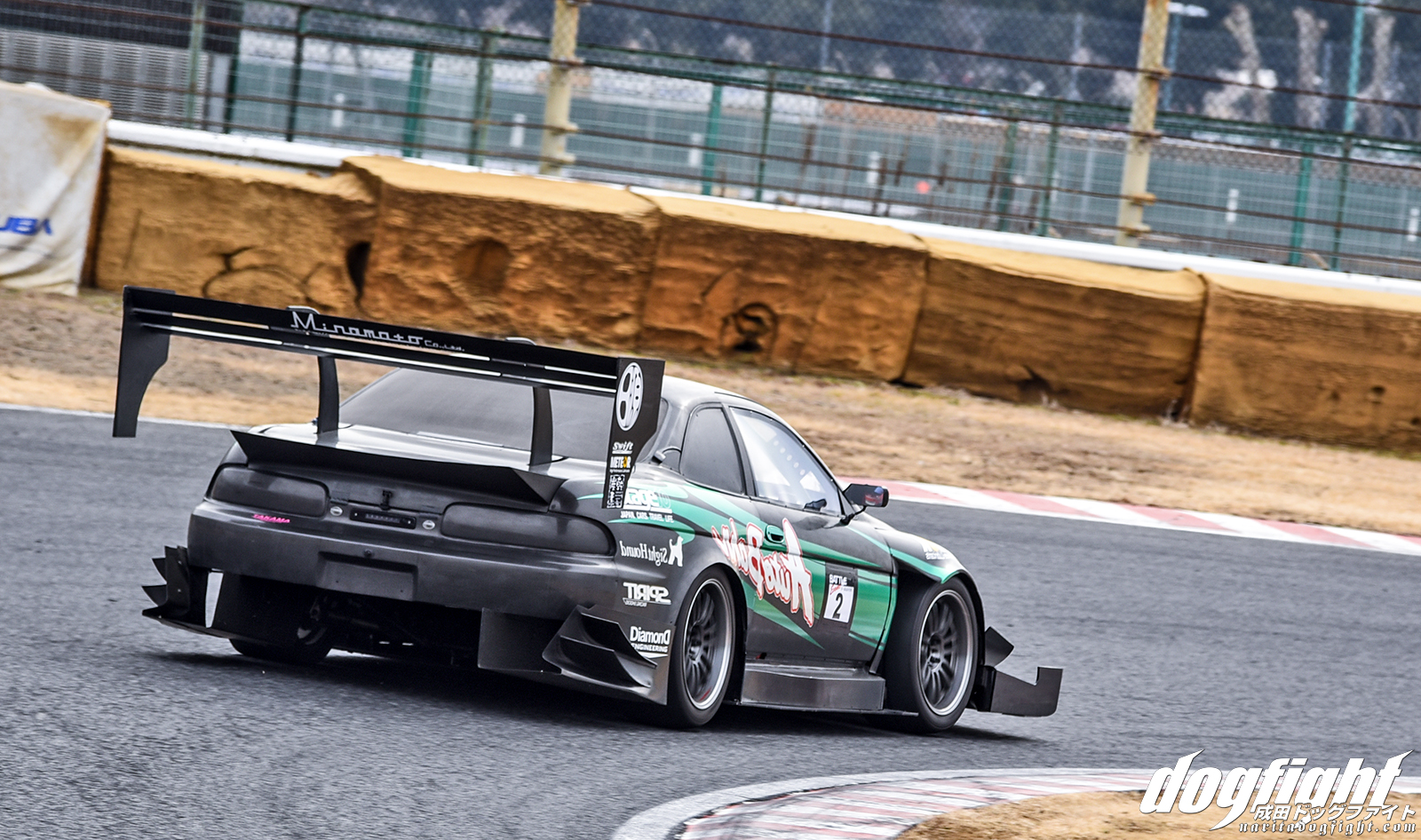 Coming out of turn 1, the car took it’s time getting on full throttle as the rear is very skitchy wide open out of this turn. 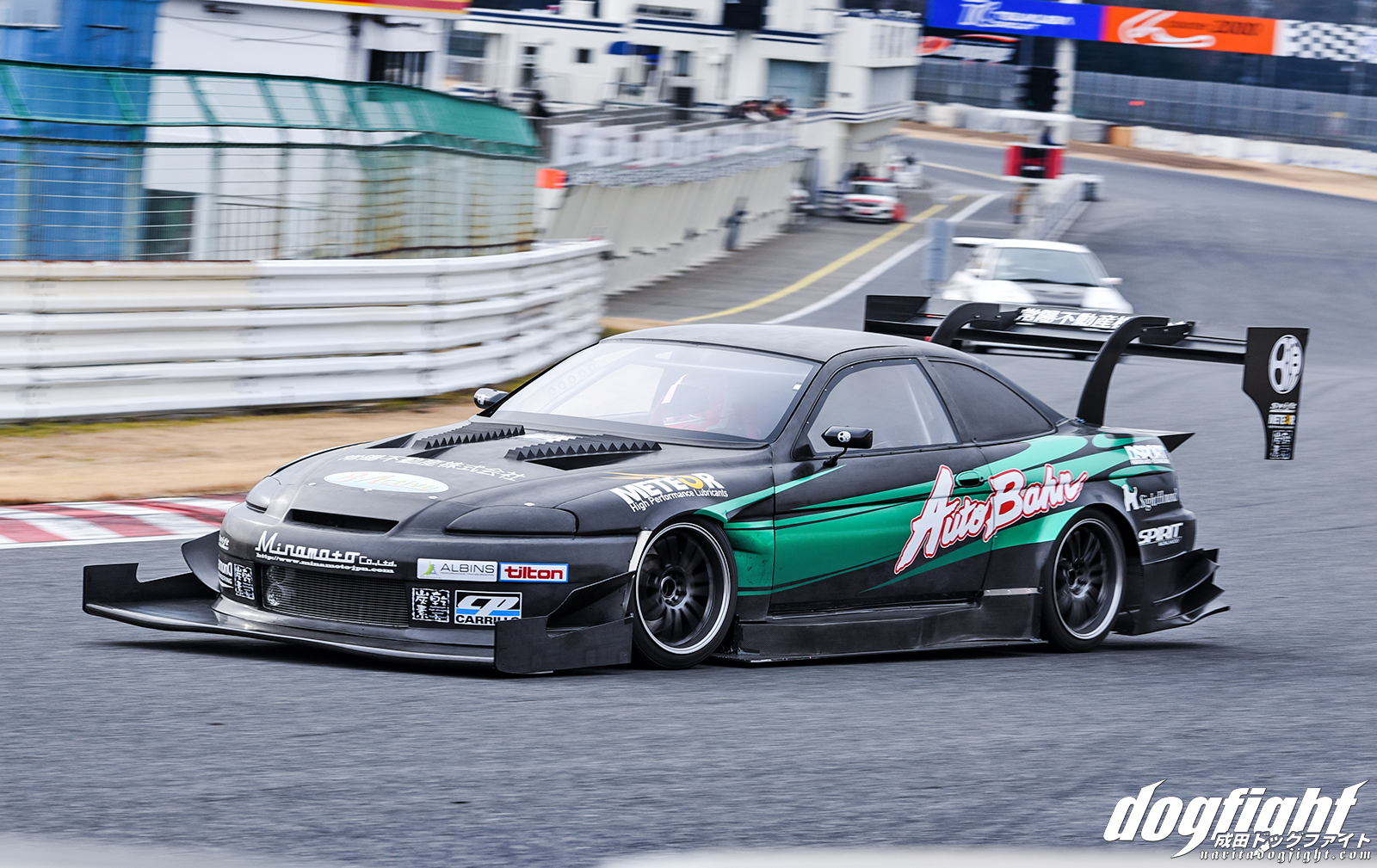 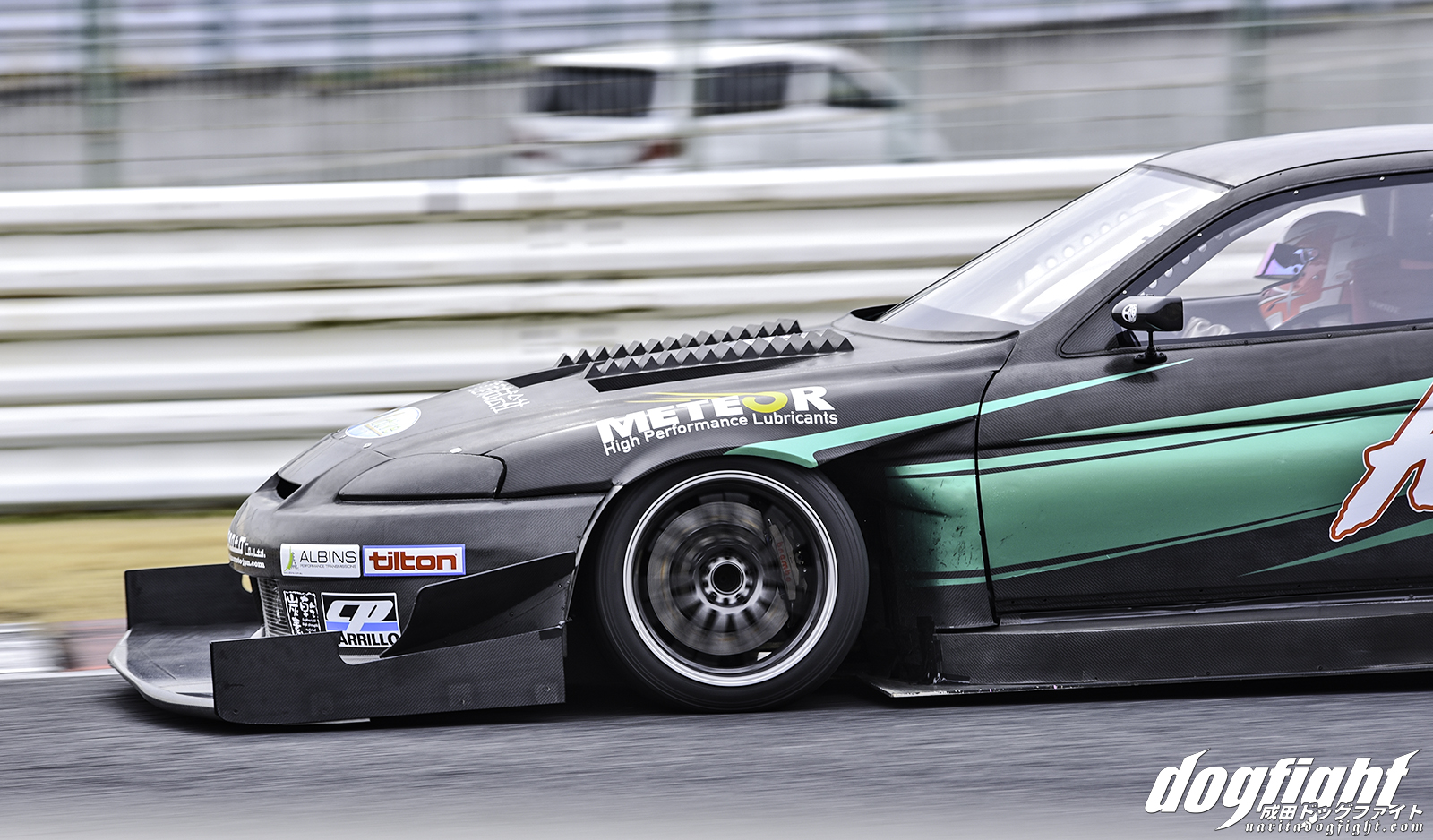 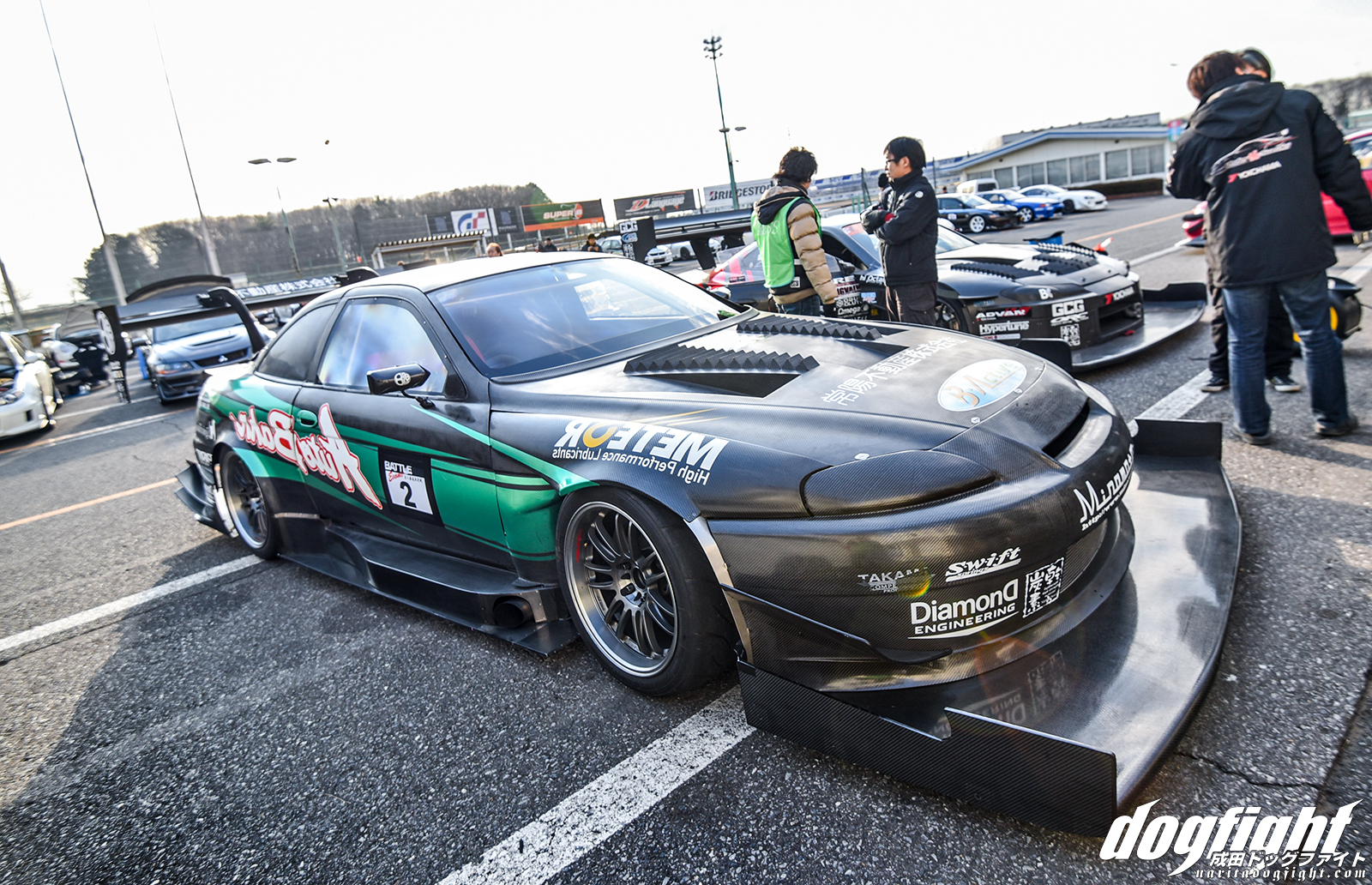 The car demands quite a presence even when static. 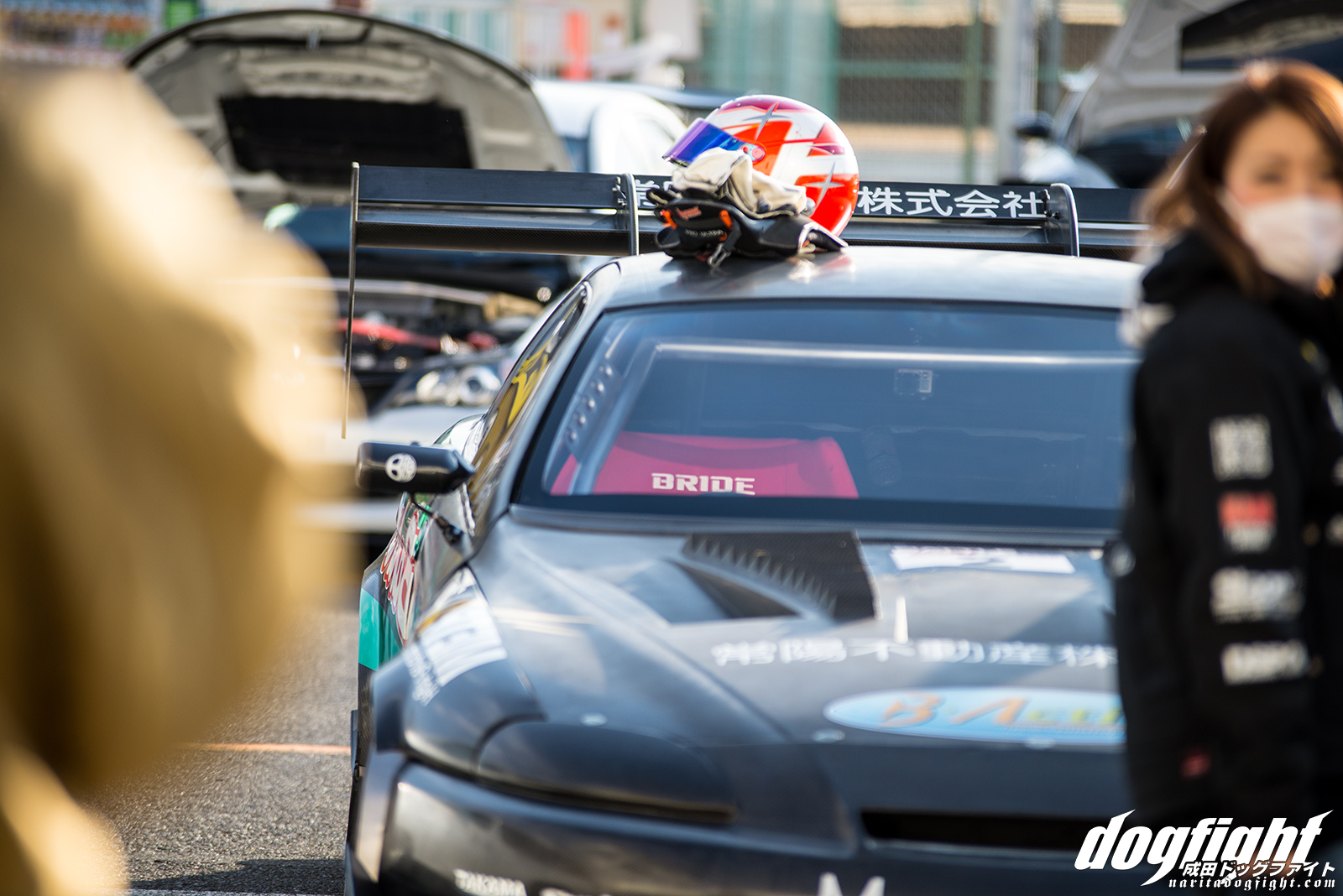 Can we all takea minute to appreciate how low the seating position is for the driver?  The Bride Proface seat is barely visible from outside the car. 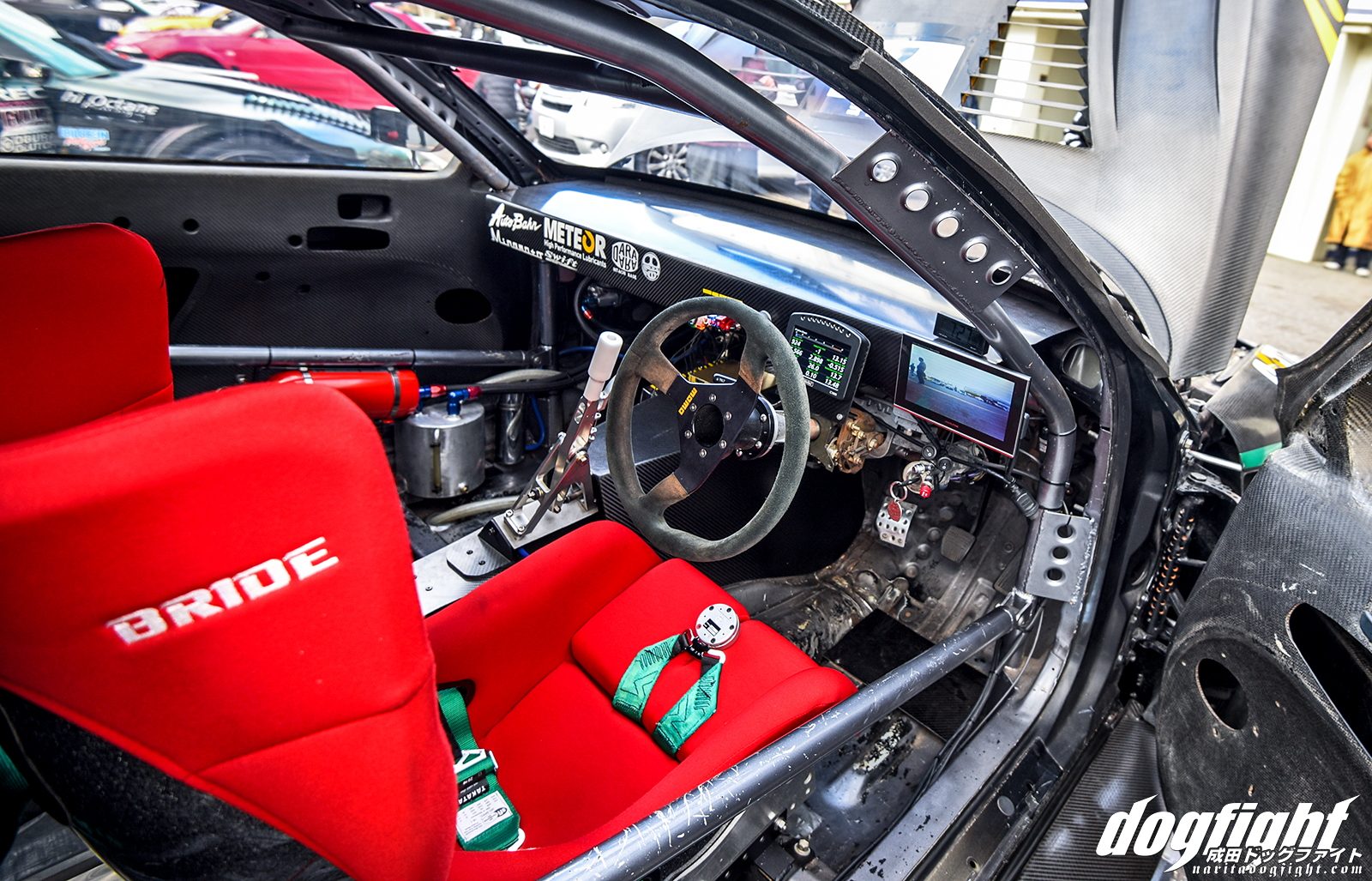 Believe it or not, the interior has gotten a bit of a makeover since I last saw it.  The gussetted roll cage remains the same, as does the tried and true Momo steering wheel.  However, the dash has been replaced with a more minimal carbon piece and the Motec dash display now gives Kunihiko the information he needs around circuit.  A large LCD screen provides him with a rear view now, as opposed to the smaller screen before.  The Albins sequential remains the center piece of the cockpit.

The team left Tsukuba with disaapointing results, but not altogether without value.  They got in yet another day of testing and worked out some bugs that they will be able to prevent in the future; it’s all part of progressing toward becoming faster.  They left with a best time of 56.522, well off their pace. 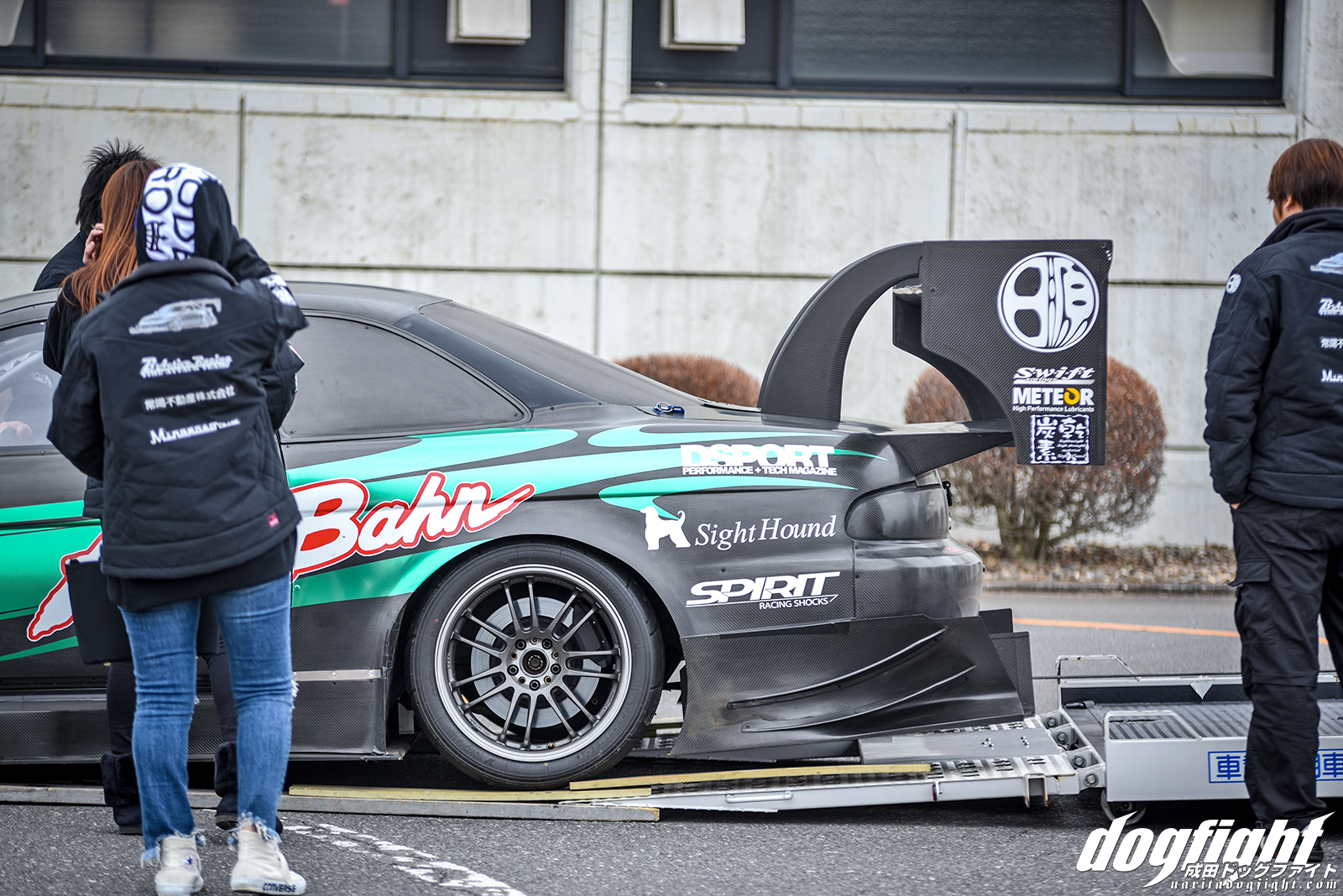 I ran to the other side of the circuit to grab some pictures of them loading it back up onto the carrier.  I said my goodbyes and wished them luck in the future. 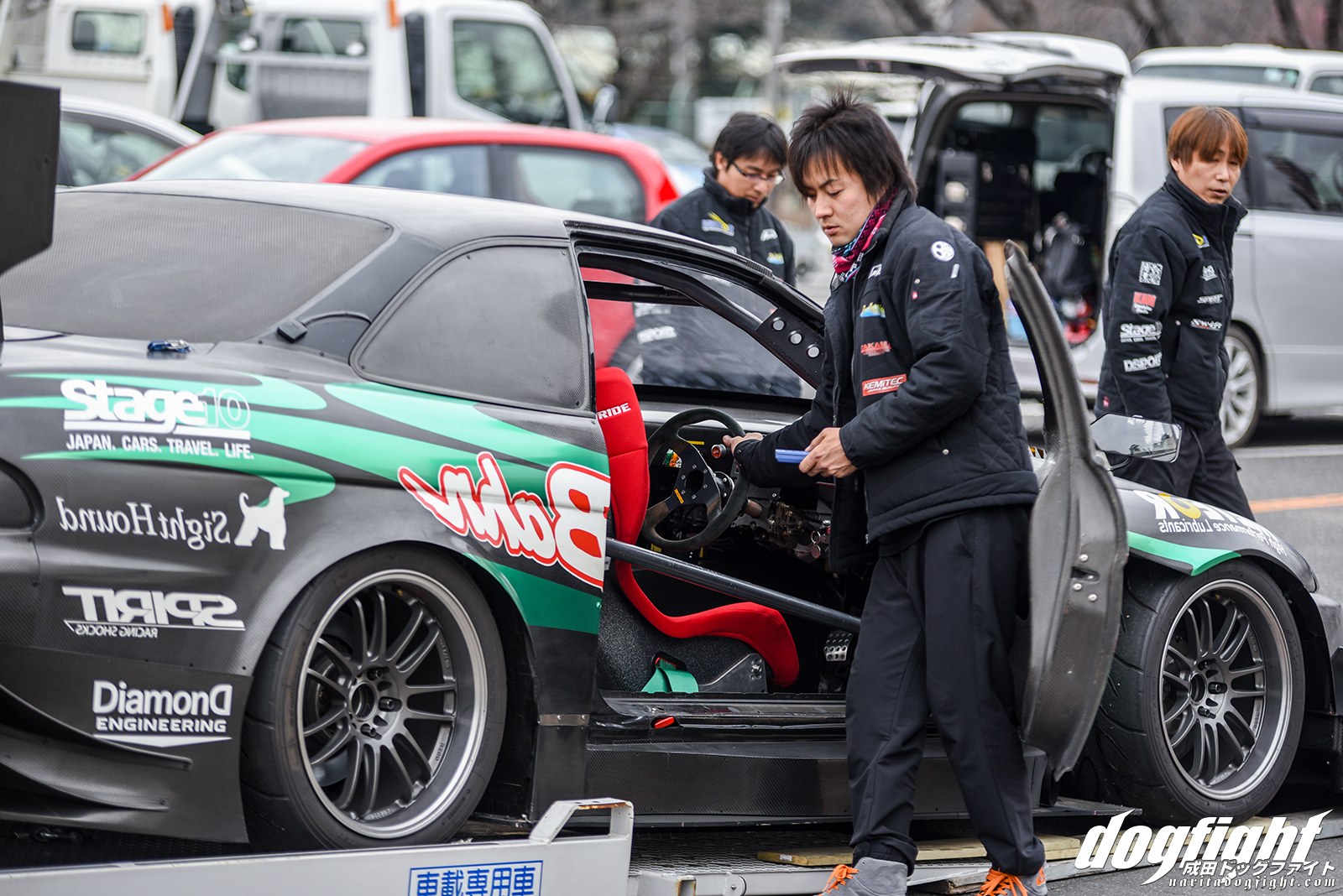 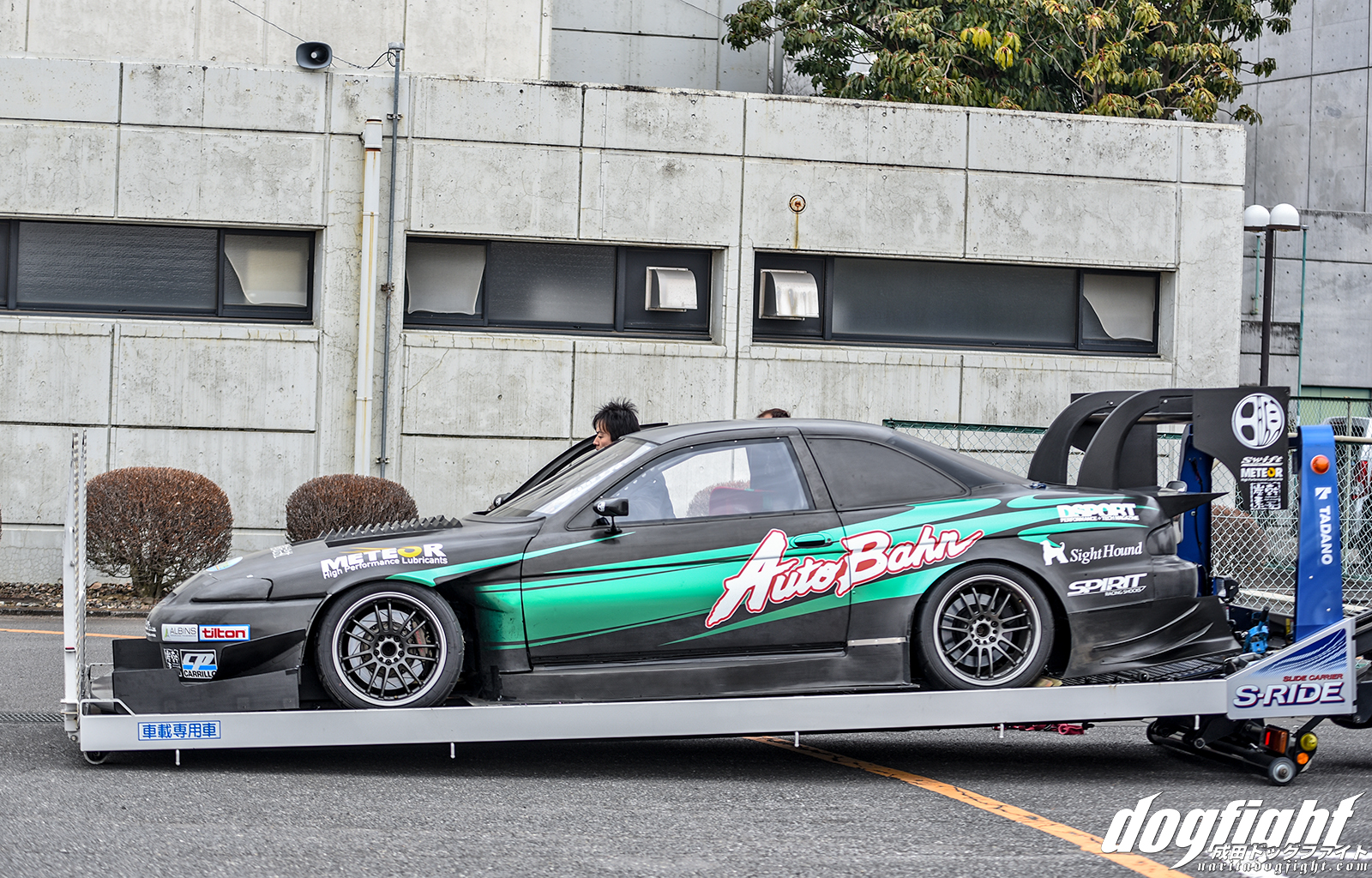 And as luck would have it, not too long after they were able to grab a new personal best of 54.470.  With that under their belt, they quickly set a new goal of 53.4 seconds around TC2000; roughly 1 second faster than the best lap they just set.  A little ambitious some would say, but I’d rather think of it as progress.