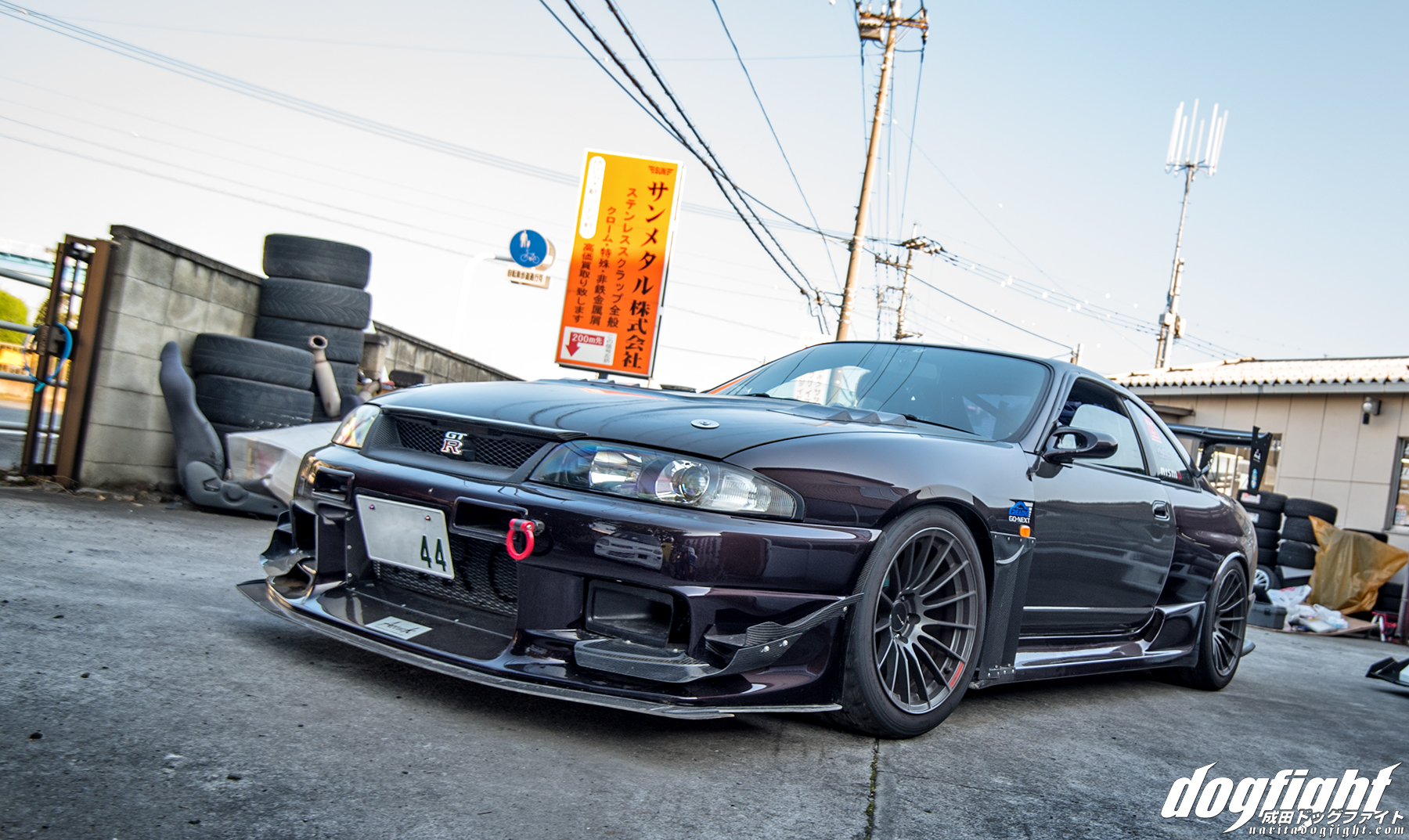 Of all the different types of Nissan chassis’s competing in time attack around the world, it’s fairly rare to see the GTR33 among them.  It’s definitely the lesser of the chosen Skyline models for road racing, and if I’m speaking honestly, I’m not overly sure why.  It is a bit heavier than the 32, but not too far off of the 34.  It’s longer wheelbase leaves it prone to a bit more understeer, and some might say it’s lacking in the looks department (now that I list the reasons, I see why).  Perhaps the R33 was just born to be the middle-child; loved, but not destined to be a favorite.  There are some people, however, that refuse to believe the popular mindset, and work outward from the R33’s positive traits to create something so overtly great, you can’t help but like it.

I didn’t mean to come off exceedingly negative in that introduction.  We should keep in mind, at the time, the R33 was the first production car to run a sub-8 minute lap at the proving grounds of the Nürburgring; even to this day not an easy feat (the current being the Huracán Performante 6’52.XX).  Maybe Nissan intended this particular variation to be built for drag racing, or performance on the ‘Wangan’, where it’s hefty size and diminished handling isn’t an issue.  Be that as it may, the owner of this particular GTR is determined to swim against the current, and build an R33 that can proudly stand amongst it’s siblings.

The R33 is one of the cars that you either hate it, or you love it.  I’ve never really came across anyone who was on the fence about it.   Igarashi Masayuki falls into the latter category, and has built his R33 to reflect both his love for the chassis, and his personal style.  The result is a car that he is happy to call his own, and can back up it’s aggressive looks on track.  The last time we spoke, Igarashi mentioned that after fitting a new set of Advan A052’s he was aiming for a 59 second lap around TC2000, and in doing so join the coveted sub-minute club at the famous circuit.

The rather hefty car sits atop a set of Aragosta coilovers that have been valved specifically for the GTR.  There’s a lot of weight being thrown around with this car on circuit, and having a premium coilover can make all the difference in handling capabilities.  Alignment is dialed-in using a full set of Ikeya Formula arms and Nismo stabilizer bars. 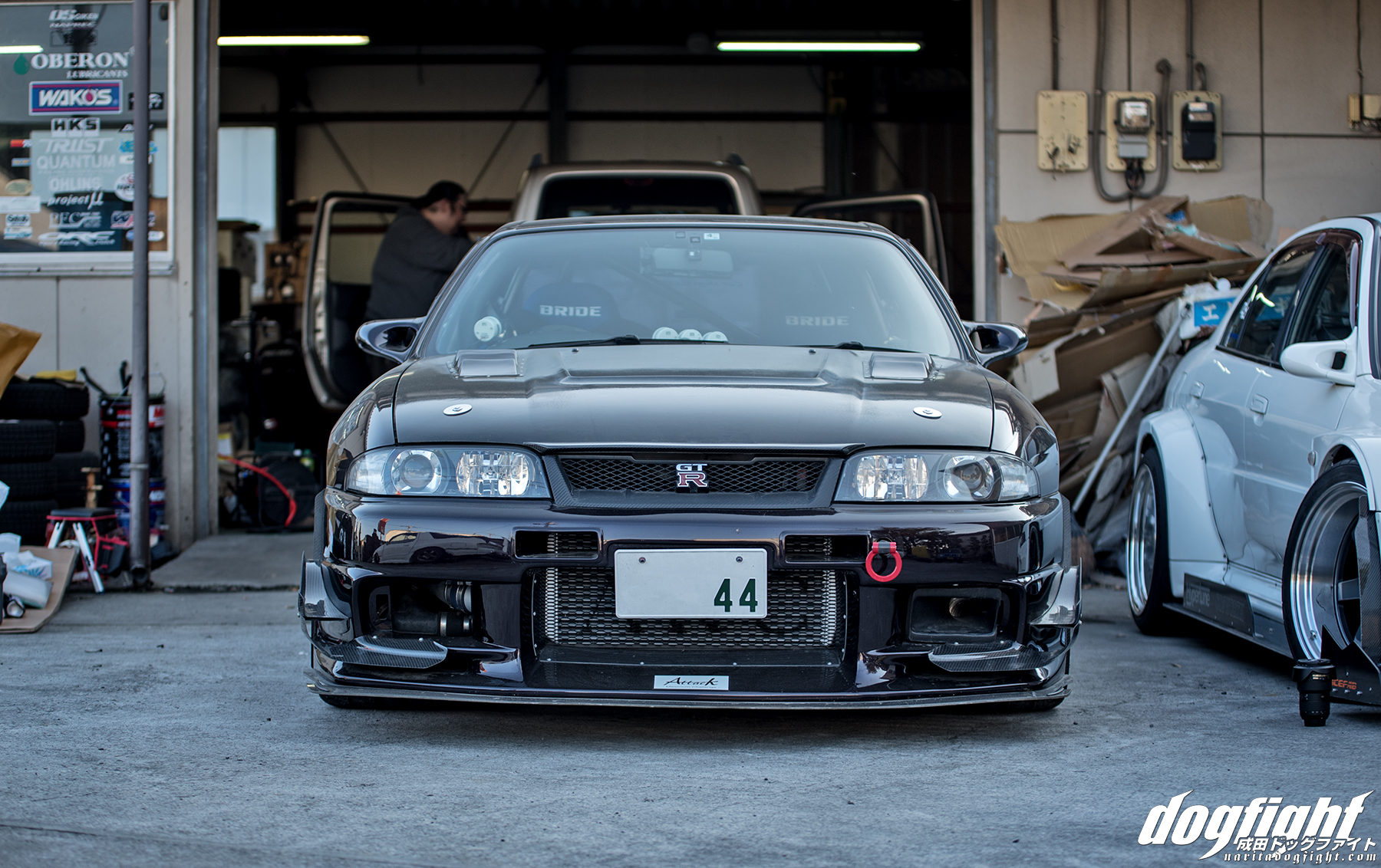 I’m of the same mindset as Igarashi, and enjoy the 33 quite a bit.  Not necessarily in a time attack form, but the car itself to me is very cool.  It’s wide, low, stature has always appealed to me; especially in high power, straight line type of way.  In order to be competitive among colleagues on track, Igarashi decided that the first thing that he needed was reliable power. 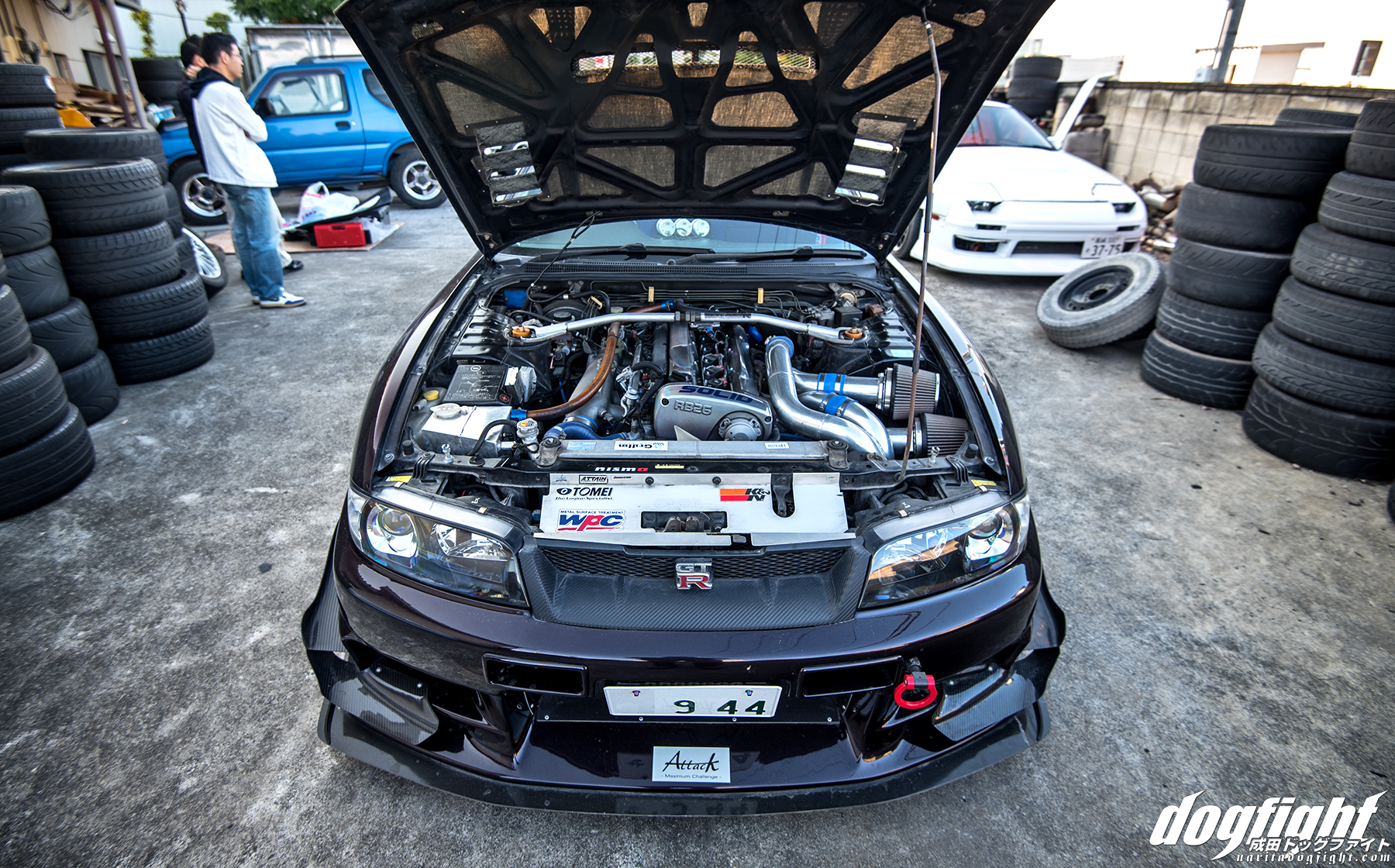 The proven performance of the RB26DETT is something that was established in the Skyline’s third generation; the R32.  Utilizing an almost identical motor for the R33 was an easy decision.  Igarashi enlisted the help of Hayashi-san of Auto House Solid to remove, and rebuild the motor to a spec that would withstand the harsh conditions on track.  Starting with a full rebuild, the RB’s block was prepped with an HKS 2.8 liter stroker kit that is comprised of HKS forged pistons, connecting rods, and a Tomei crankshaft.  The head was upgraded with Tomei Cams and cam gears, and Solid’ custom porting process.  The two were finally mated together using an HKS head gasket. 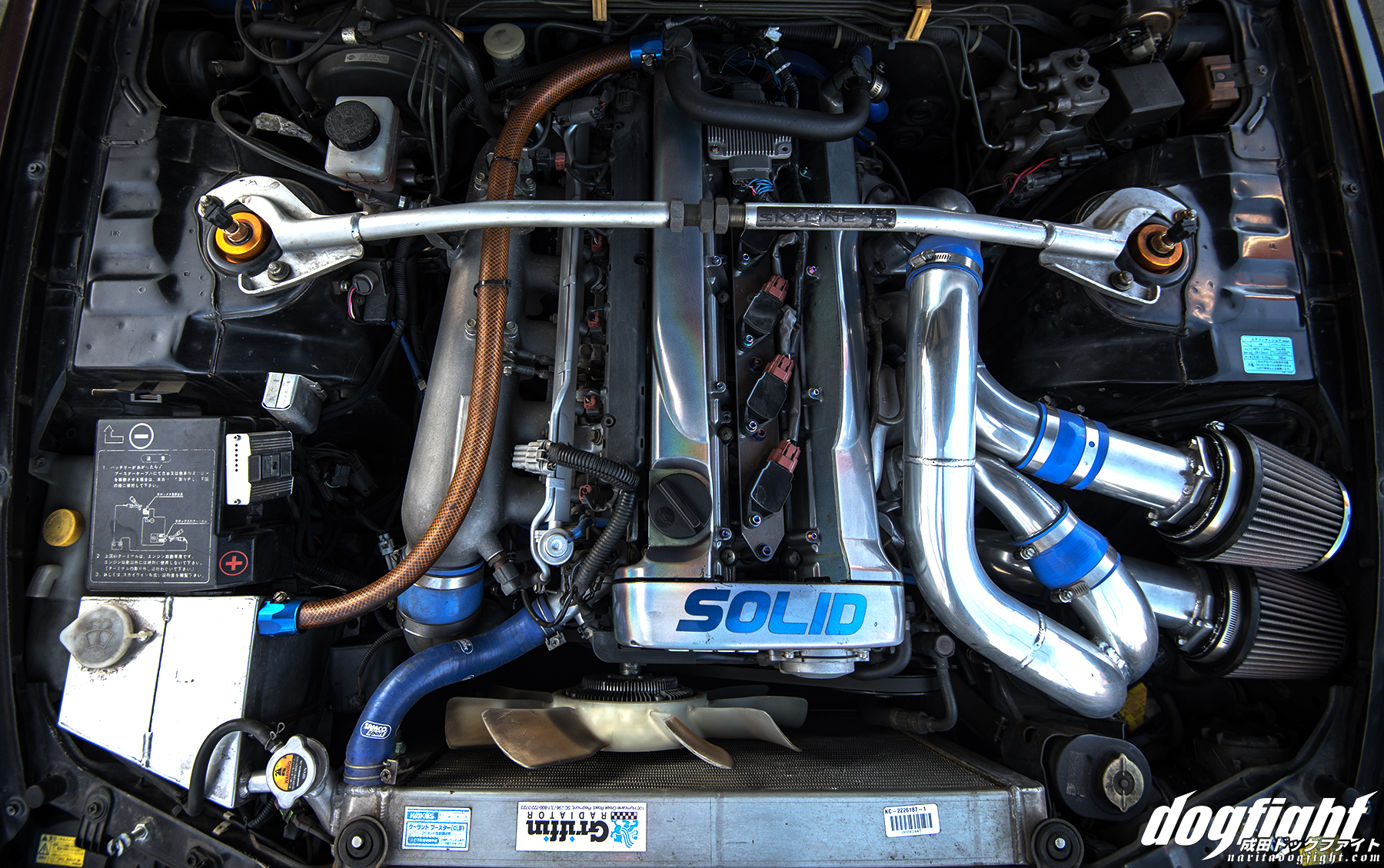 The OE turbines were replaced with a pair of Nismo turbines, ensuring reliability on the circuit as well as during commuting hours.  HKS GTSS piping is used throughout the bay in conjunction with Griffin Radiator, ARC Intercooler, and oil coolers to keep engine temps in check.  A Nismo fuel pump is employed along with Nismo 600cc injectors to deliver fuel whenever the HKS V-Pro ECU tells them to.  The ignition system from a R35GTR upgrades the older RB unit. 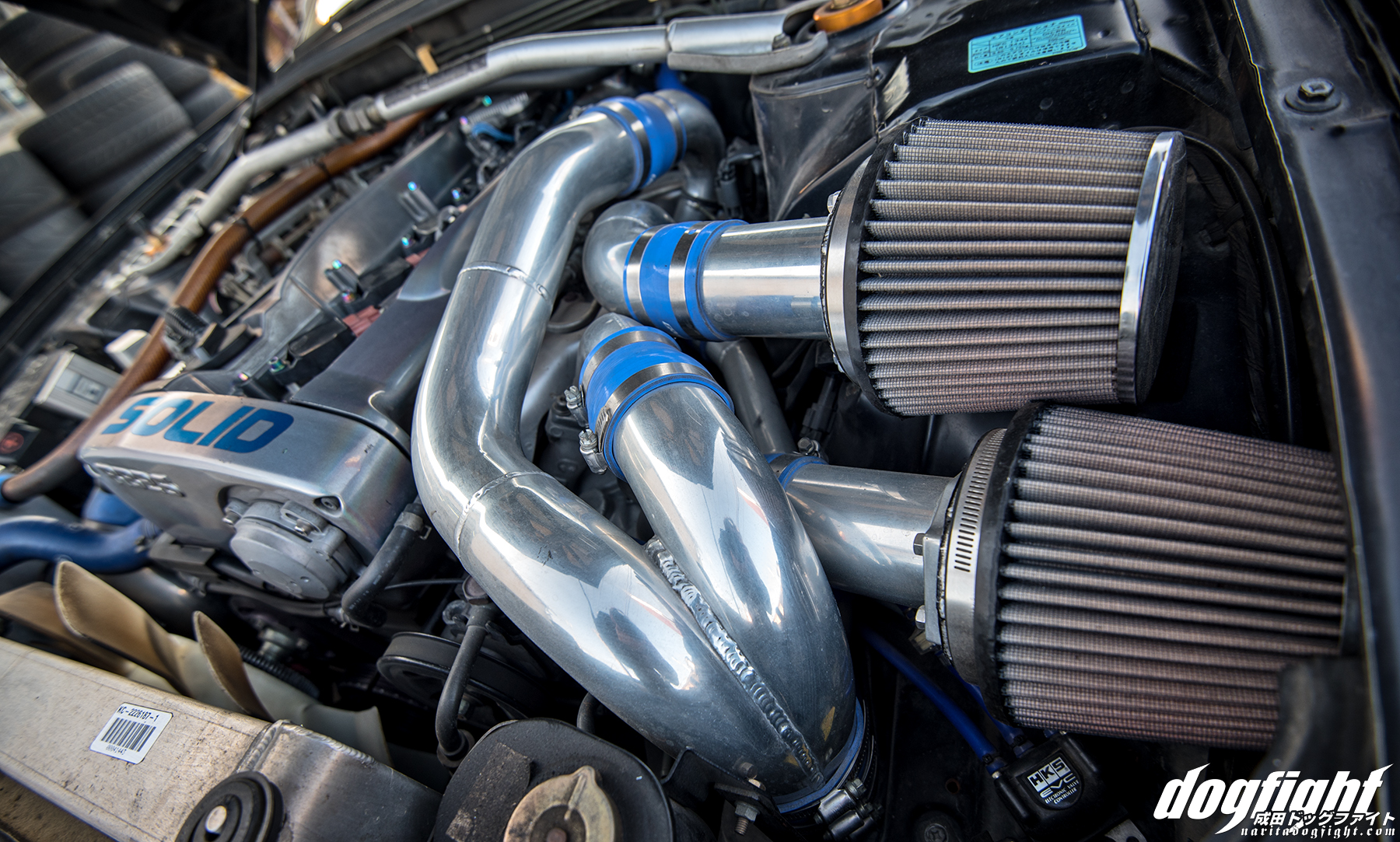 The setup is tuned to effortlessly make well over 550 ps; plenty for a street car, and for the times that Igarashi is shooting for on track.  Hayashi used an ATS carbon twin disk clutch, an AG-Y transfer case, Auto House Solid front differential, and an ATS carbon rear diff to transfer everything to pavement. 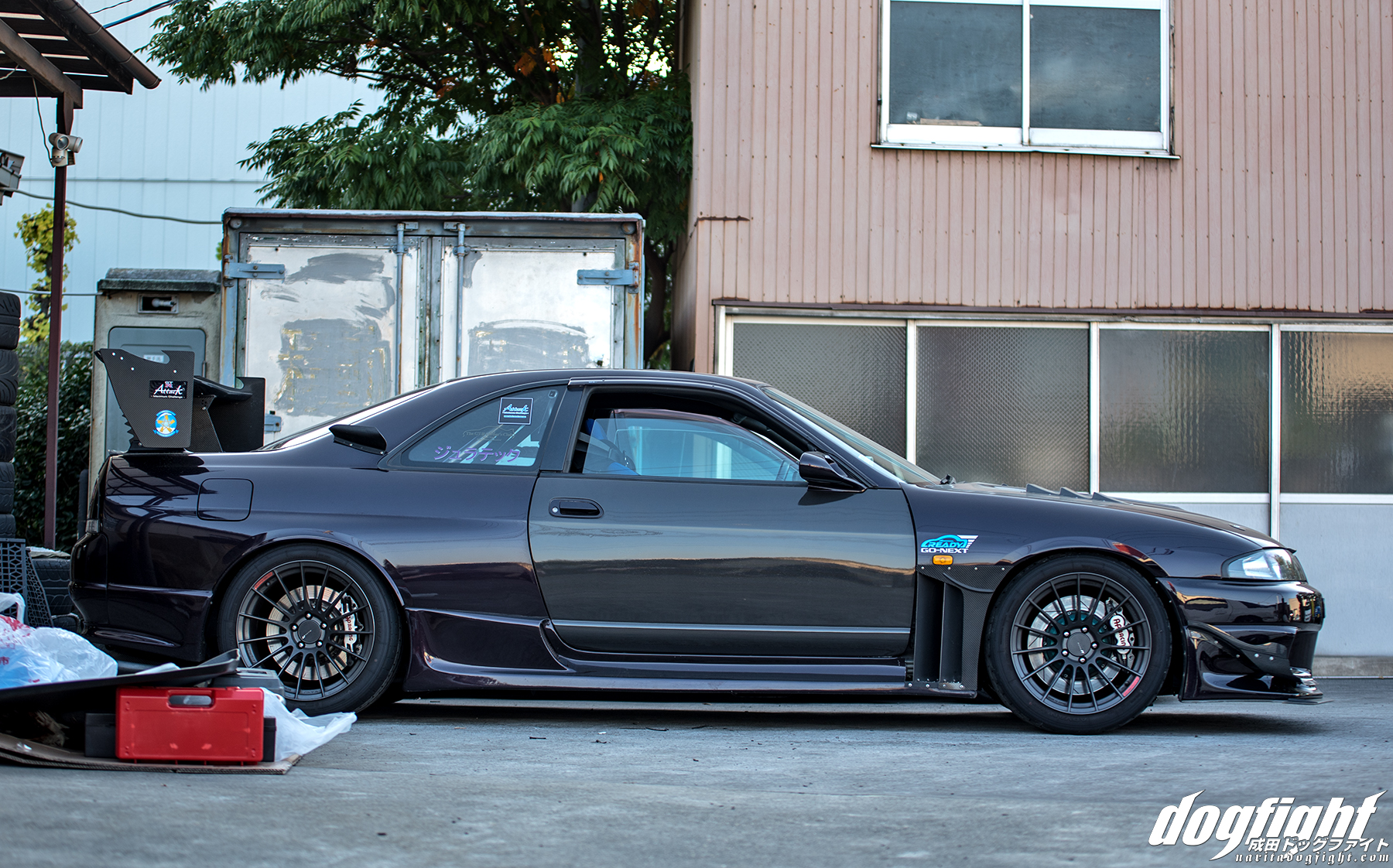 The car’s exterior has been transformed by some choice parts to both assist in aerodynamics, and cut weight. 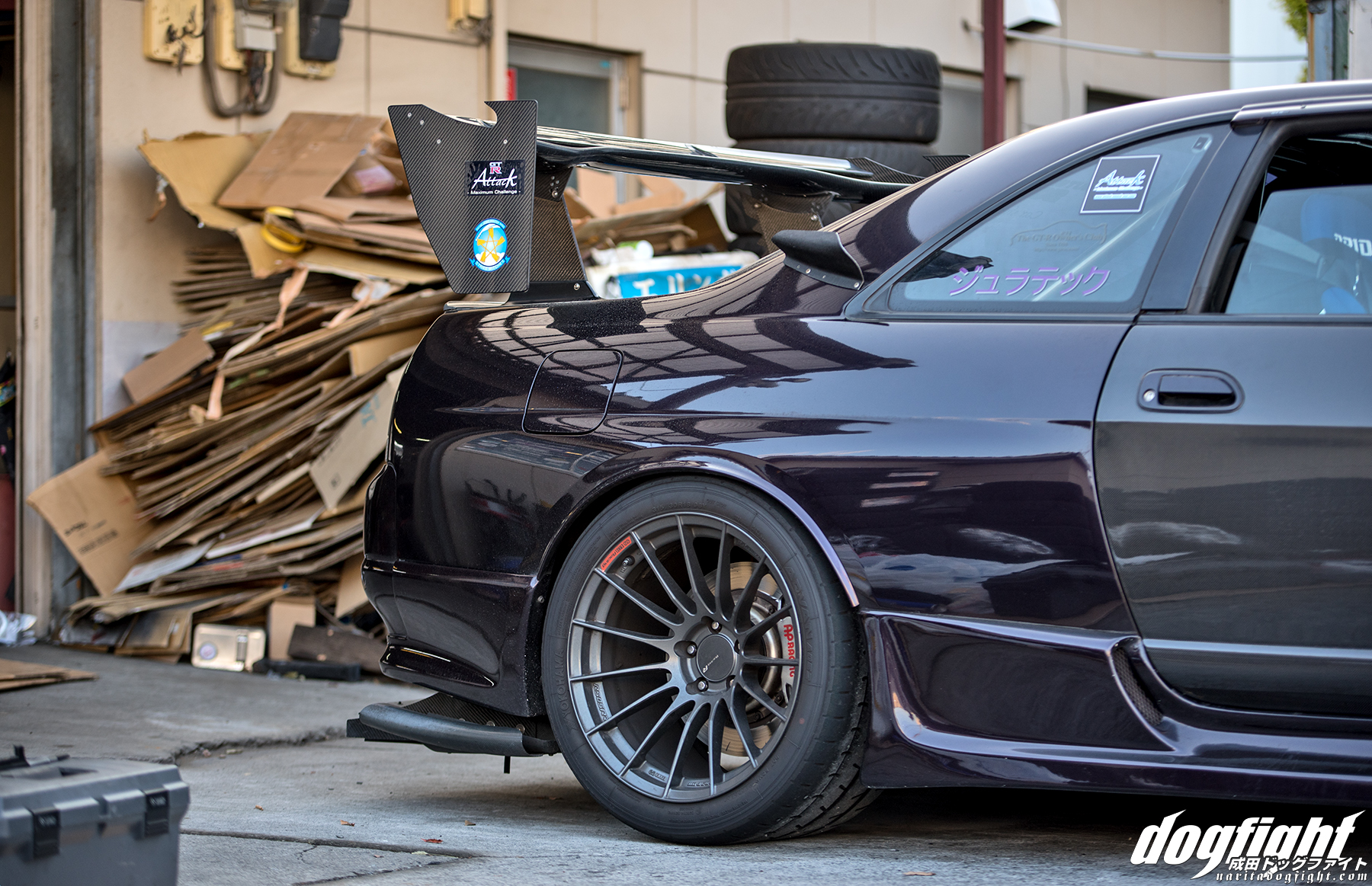 A Top Secret rear diffuser coerces airflow from under the car, while a carbon GT wing (that Hayashi jokes as being rusty) mounted on top of the trunk helps with rear downforce. 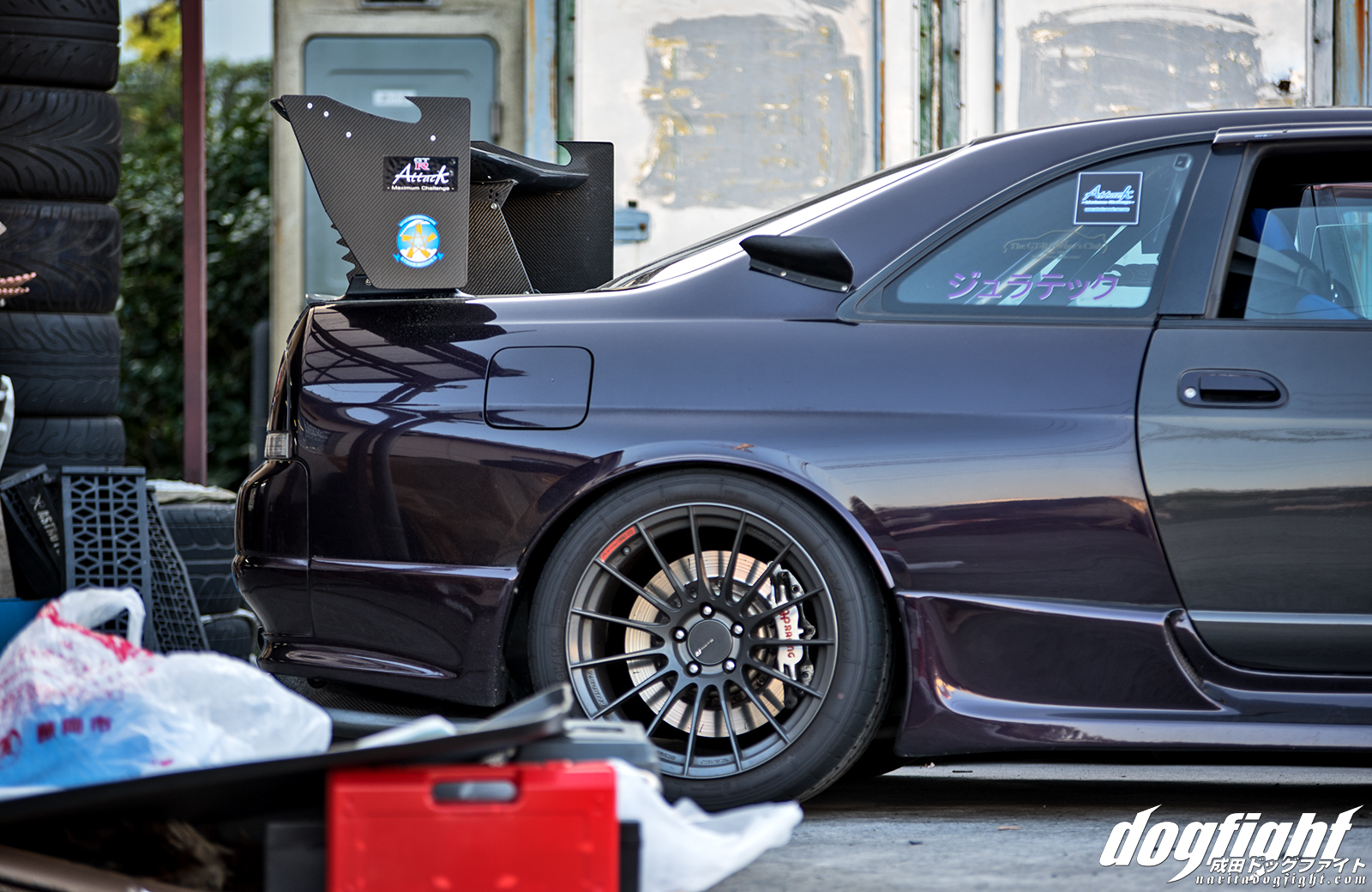 A neat little C-pillar mounted canard, I’m assuming, directs airflow toward the GT-wing.  Regardless of what it does, it still looks pretty cool. 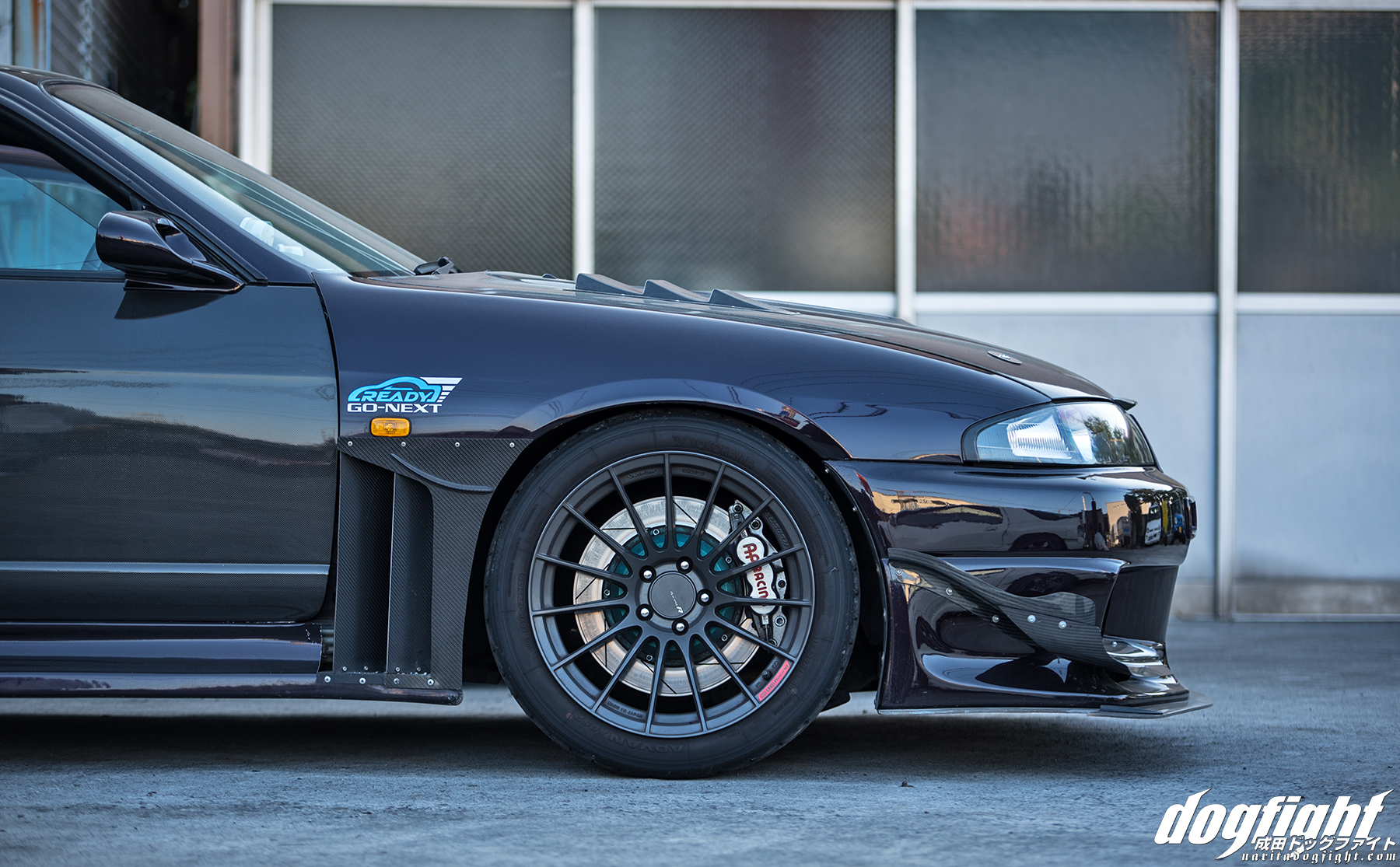 Top Secret side steps and front bumper round out the main aero parts on the car.  Custom carbon fender vents were crafted and mated to the OEM fenders to make more space for the massive tires, and to alleviate pressure buildup.  Small but notable canards and splitter adorn the Top Secret front bumper, adding to the look of the car. 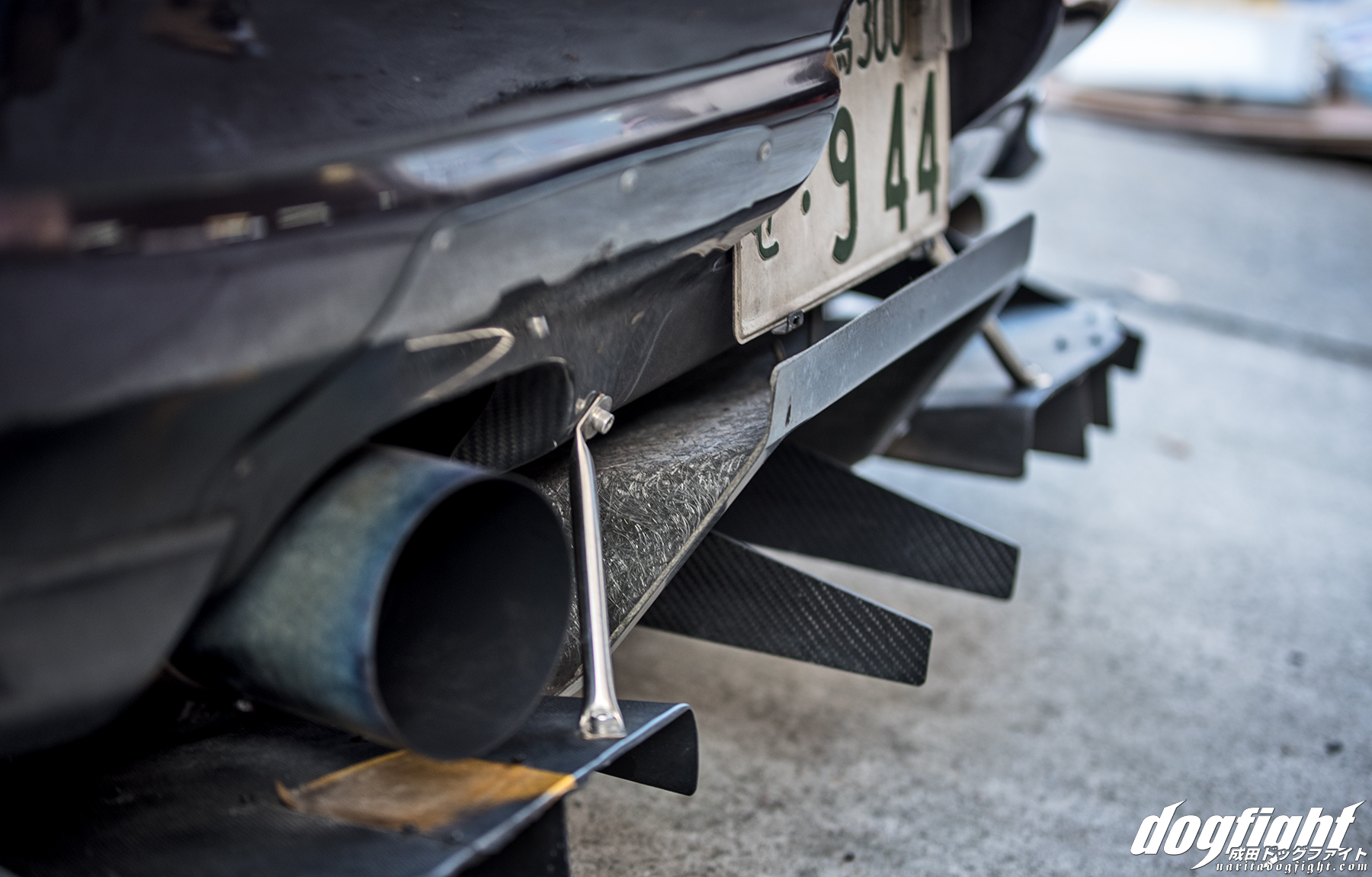 Closer look at the diffuser… 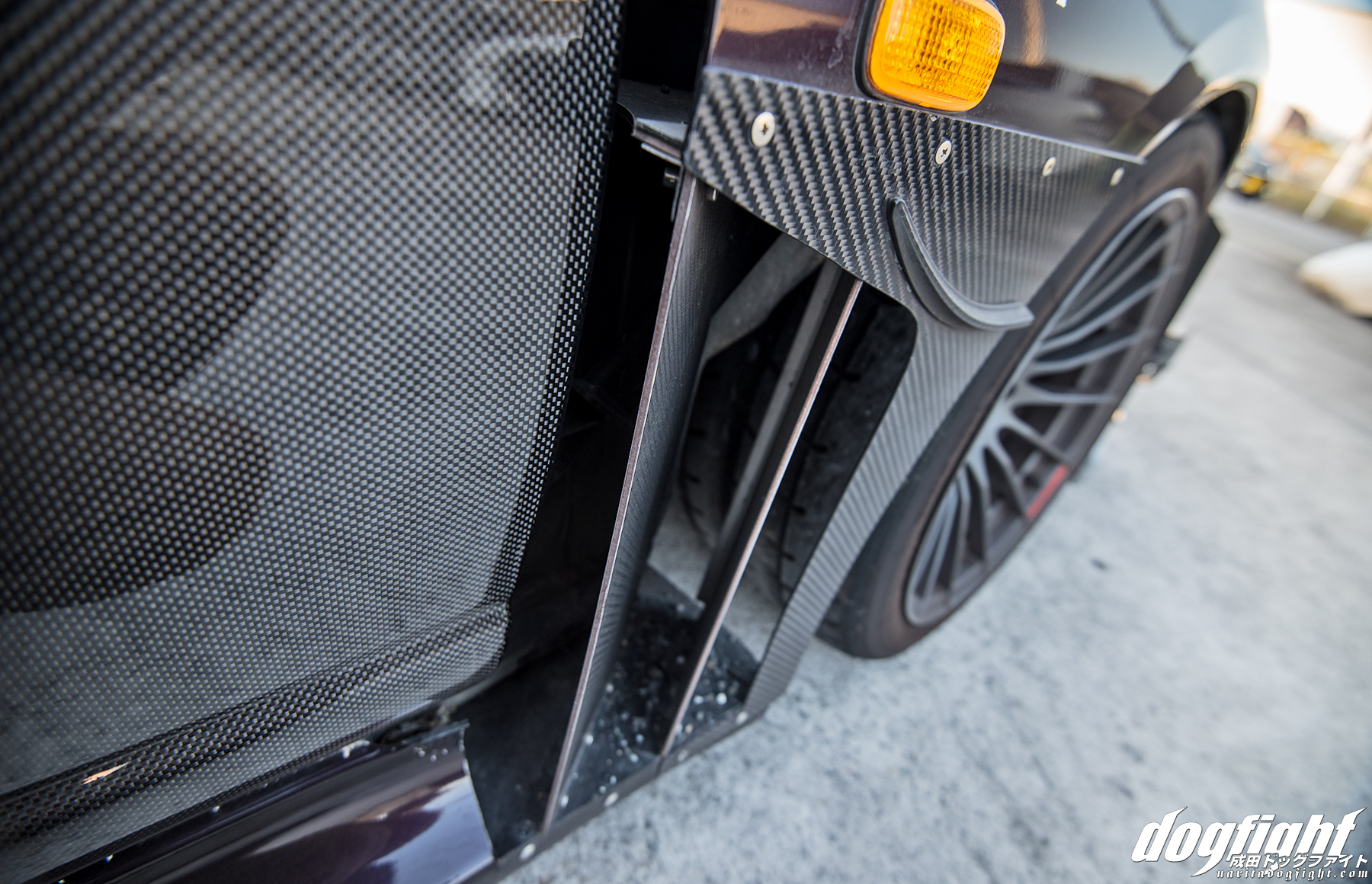 …and the customer fender mounting. 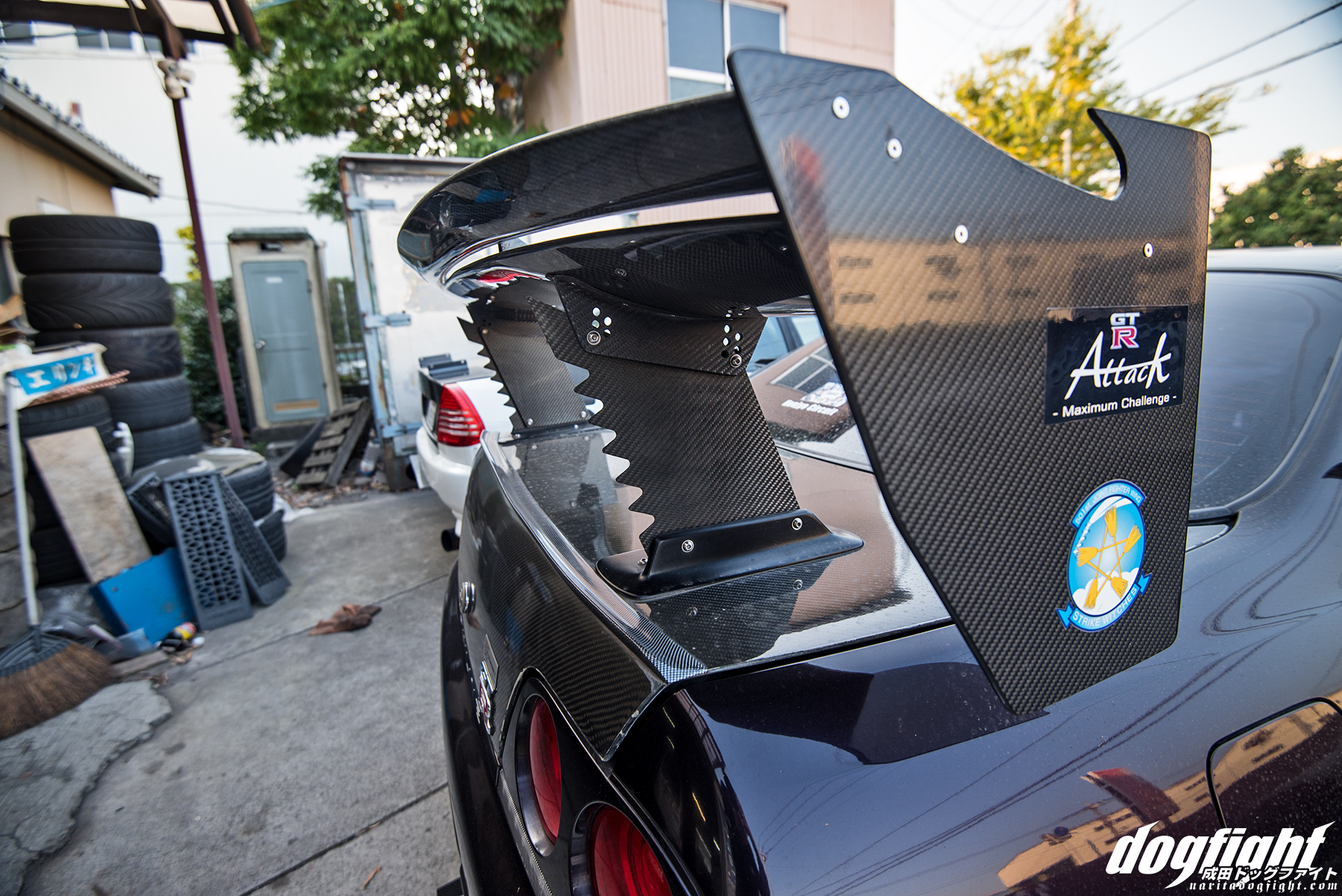 The wing stands for the GT wing have been changed to carbon, and are cut to give the custom end plates a matching look. 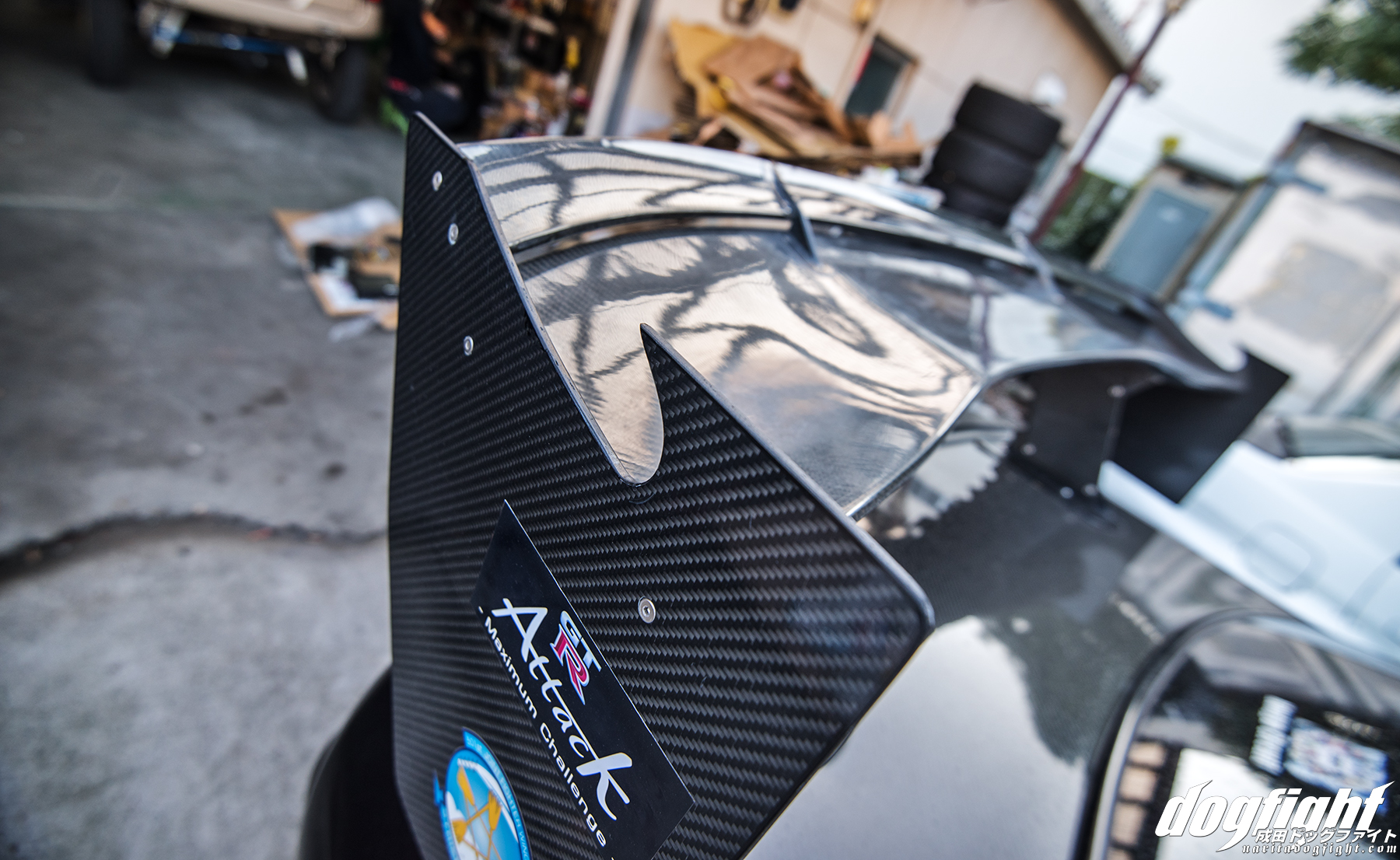 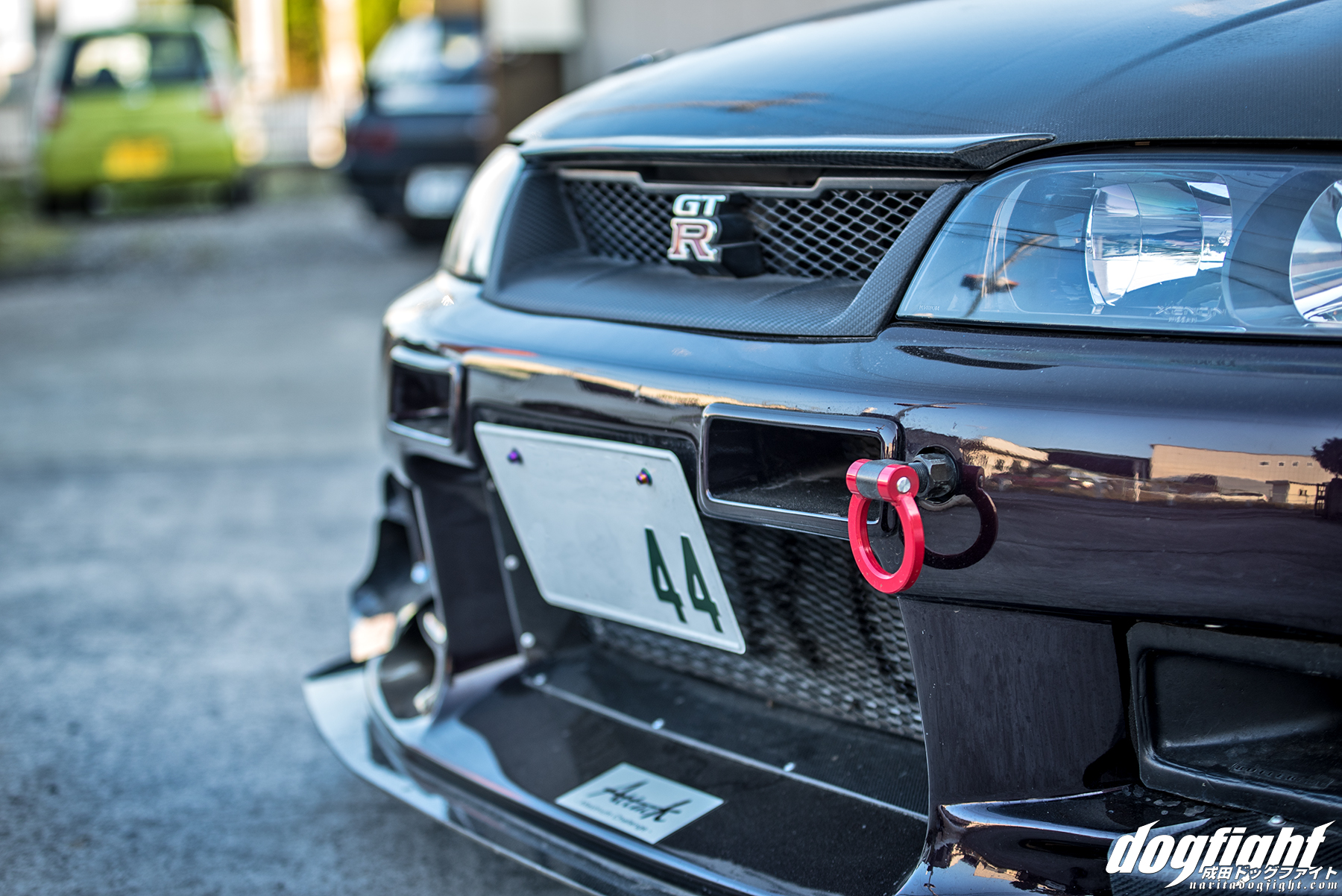 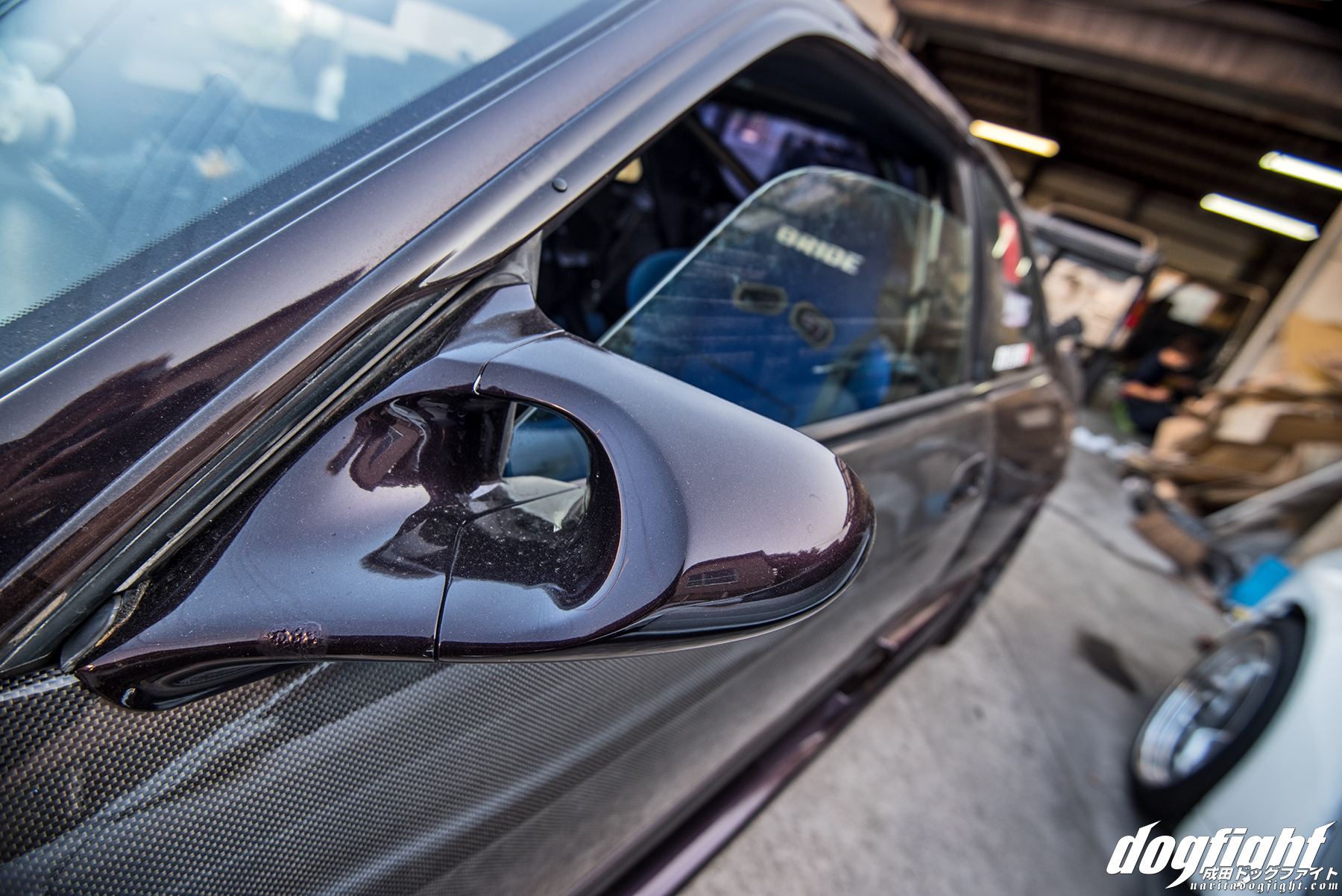 Ganador side mirrors are a perfect fit for the R33. 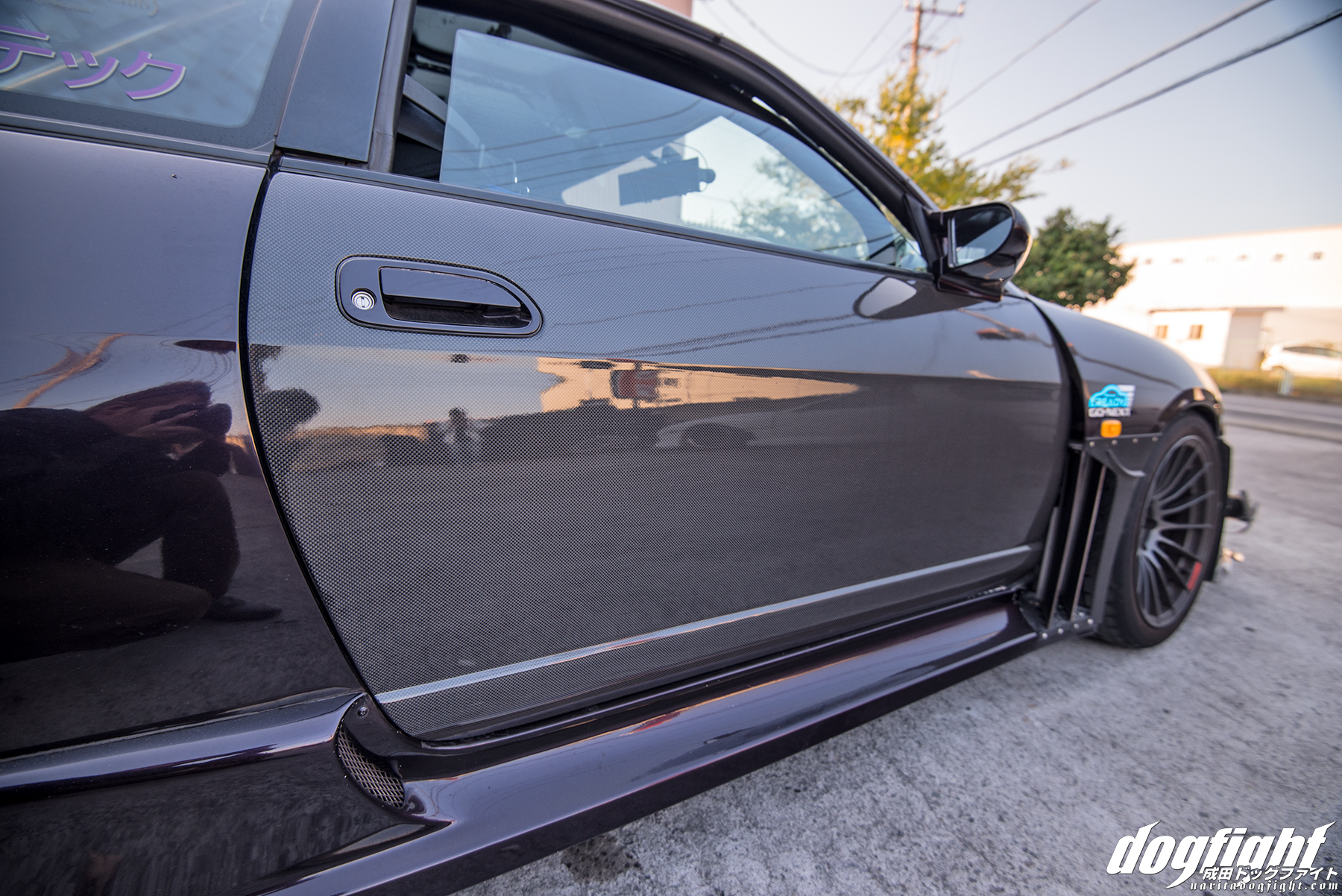 The most recent upgrade that Igarashi has made to the car are the carbon doors.  A huge portion of weight was cut by swapping out the heavy OE doors; a much needed reduction when you take into consideration the curb weight of the car. 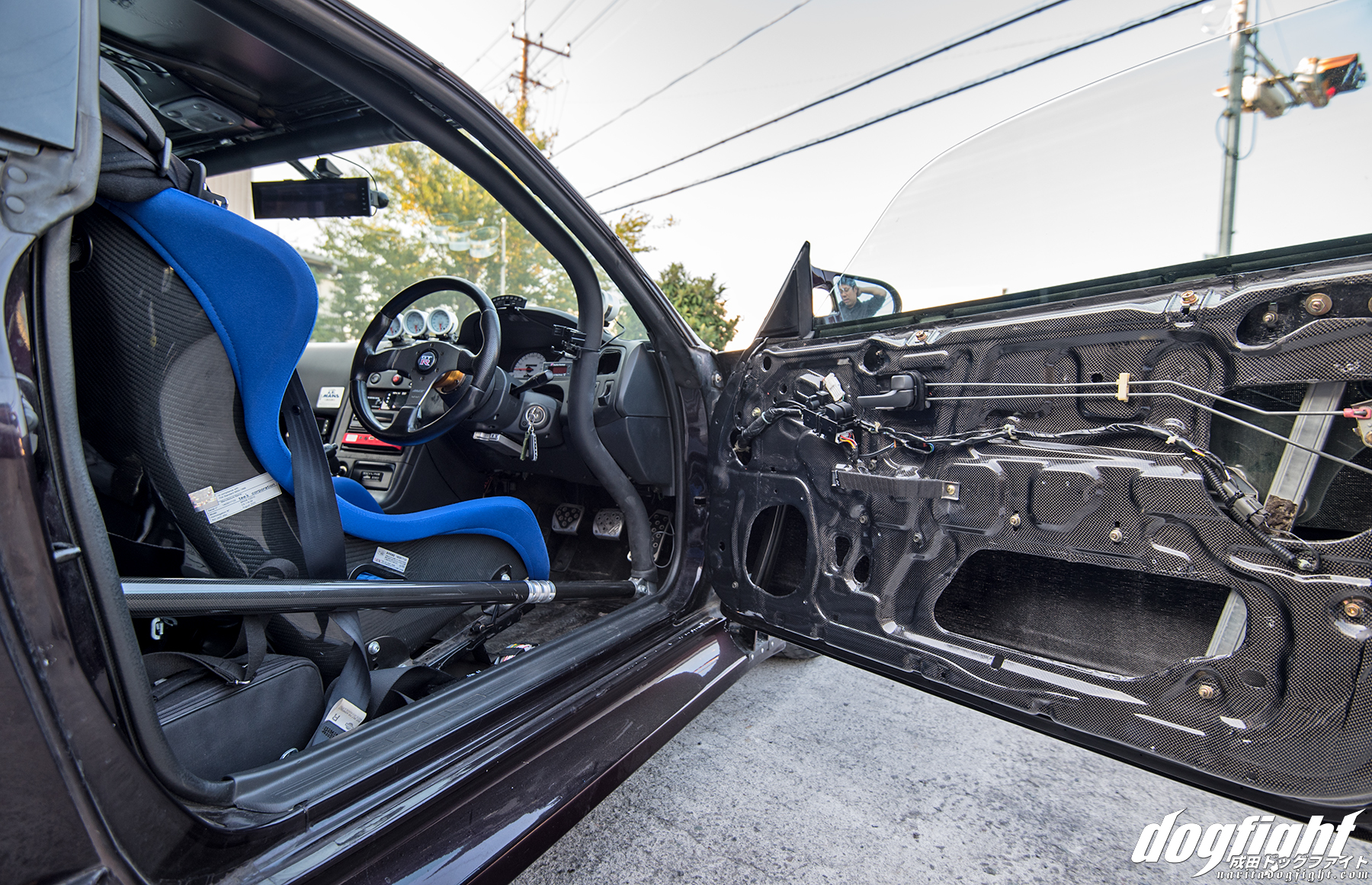 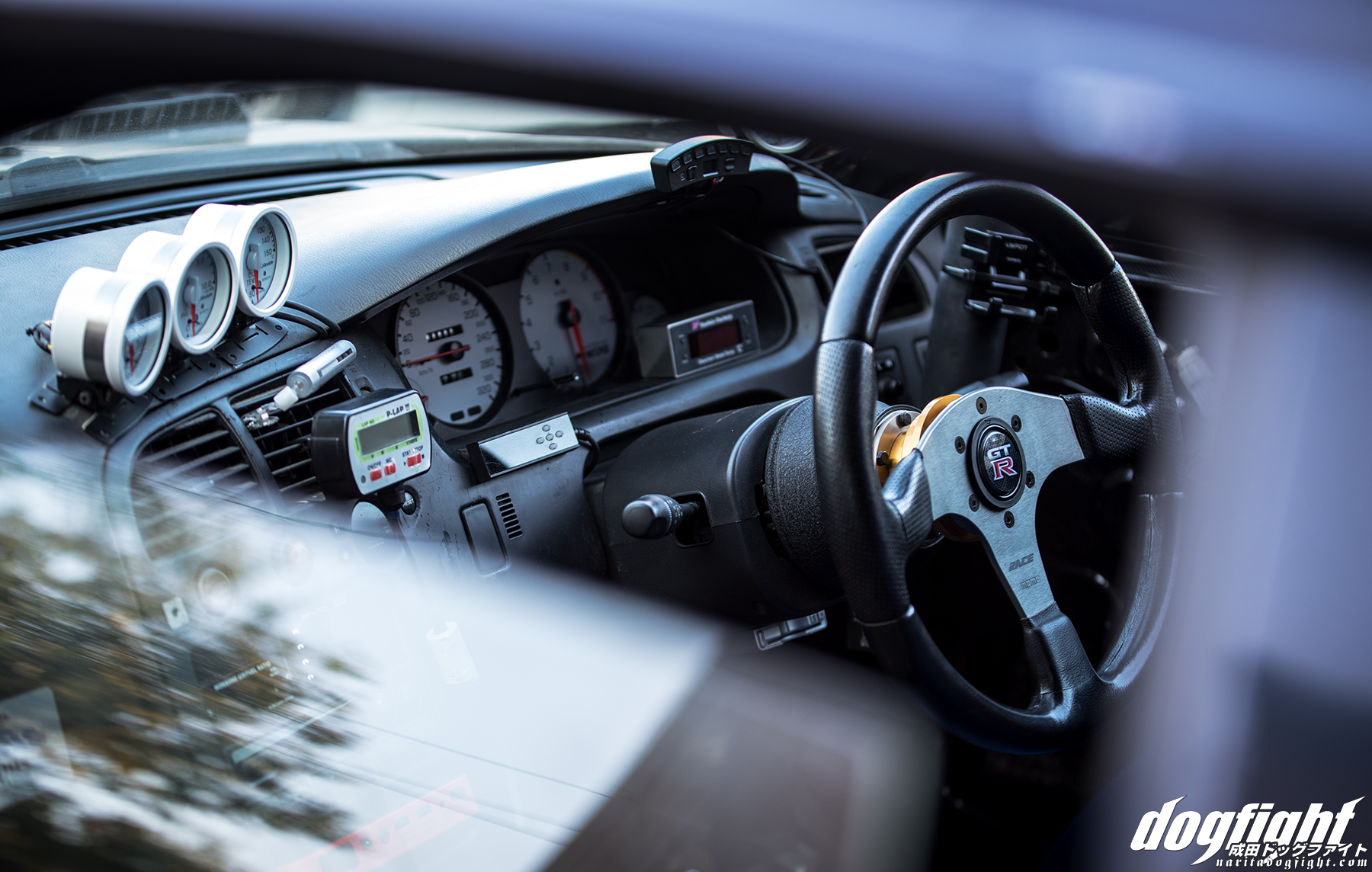 Inside the car is pretty standard street car with a little panache that lets you know this car is tracked.  The MOMO Race steering wheel is front and center, and gets enveloped by a plethora of different GReddy gauges and monitors.  The carpet and rear seats have been abolished and in it’s place is a Saito, 6-point roll cage, a small fire extinguisher, and a pair of blue Bride ZETA III bucket seats. 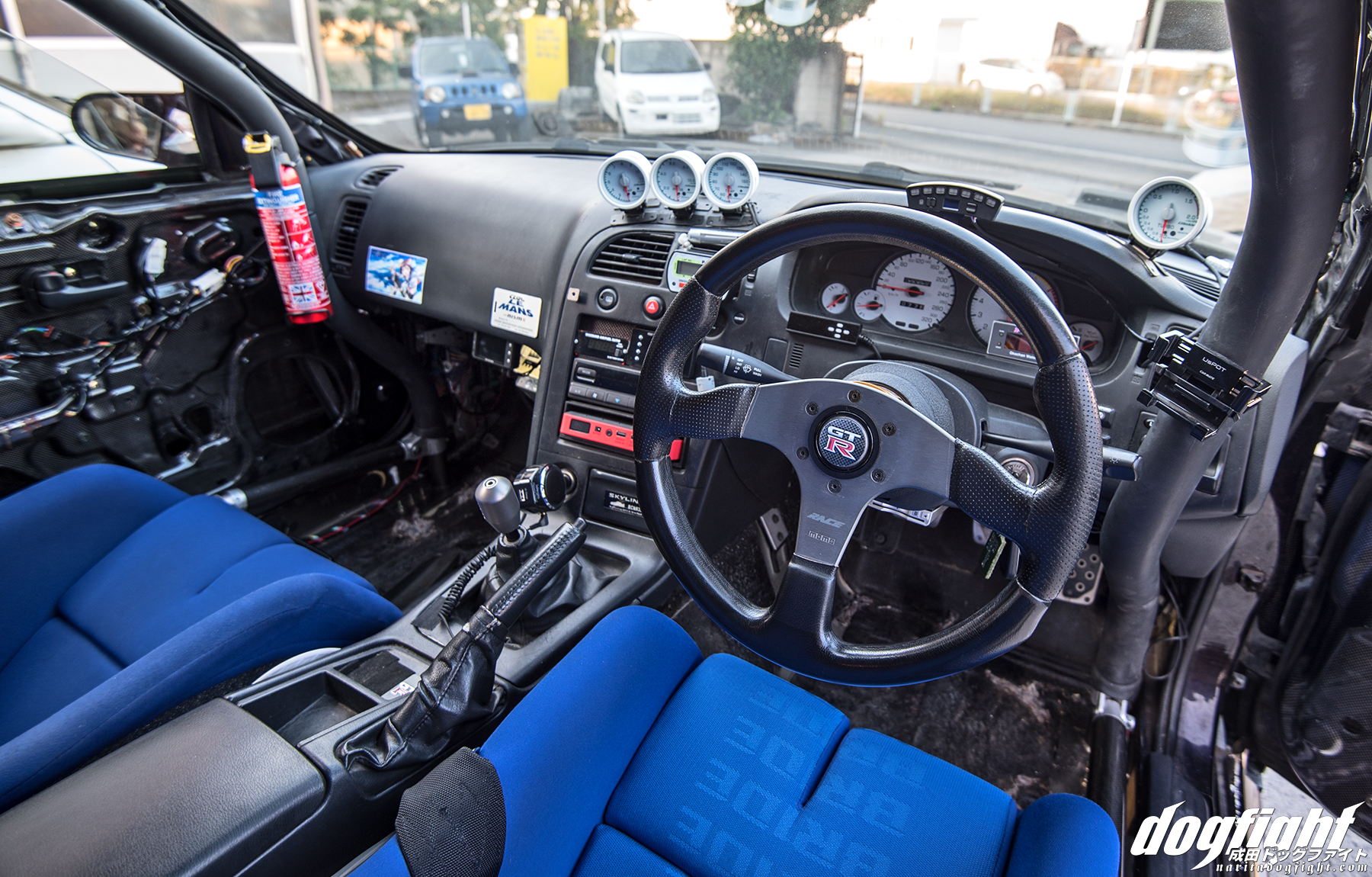 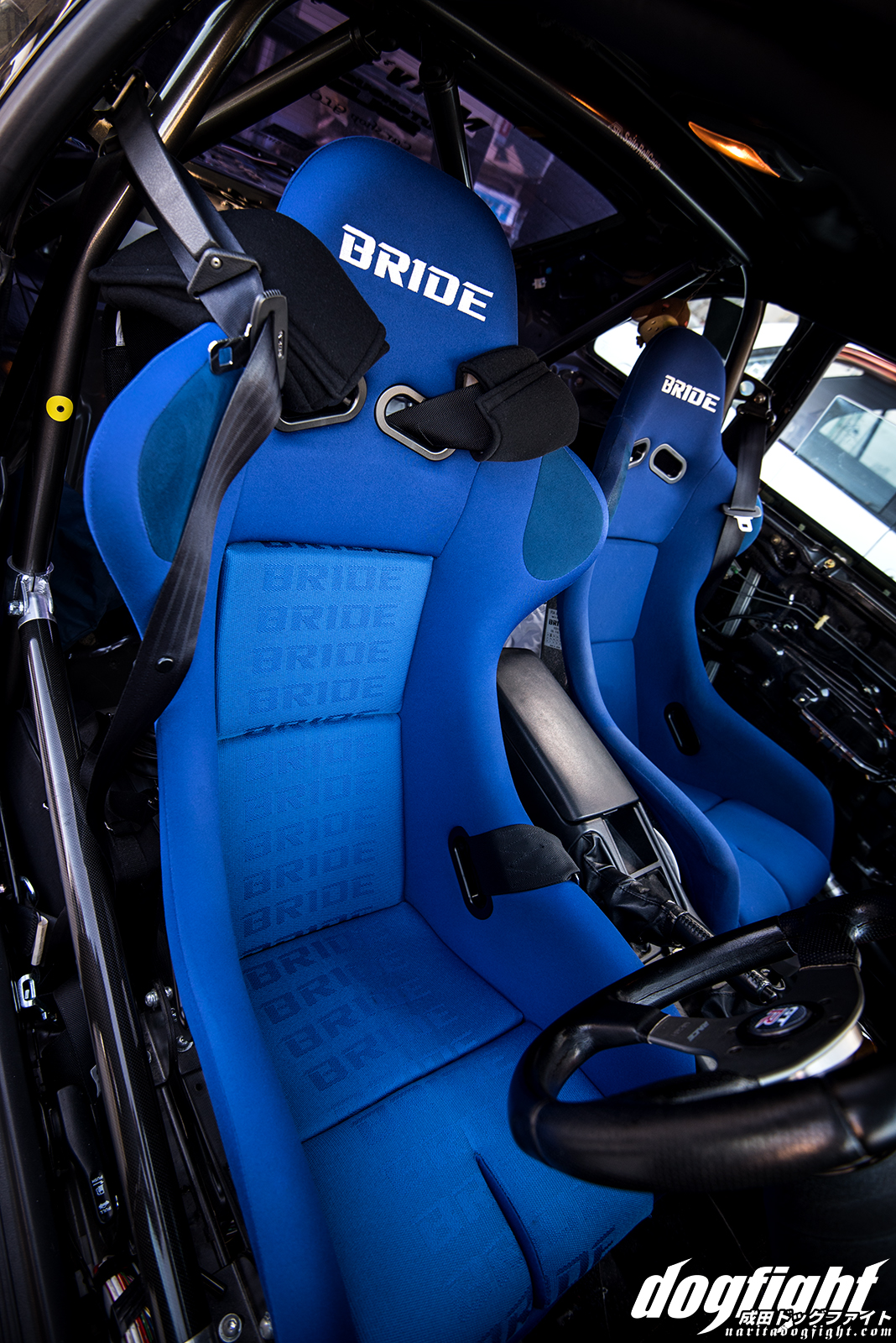 I really like the blue ZETA III’s; would make a cool passenger seat in my Civic…hmmm… 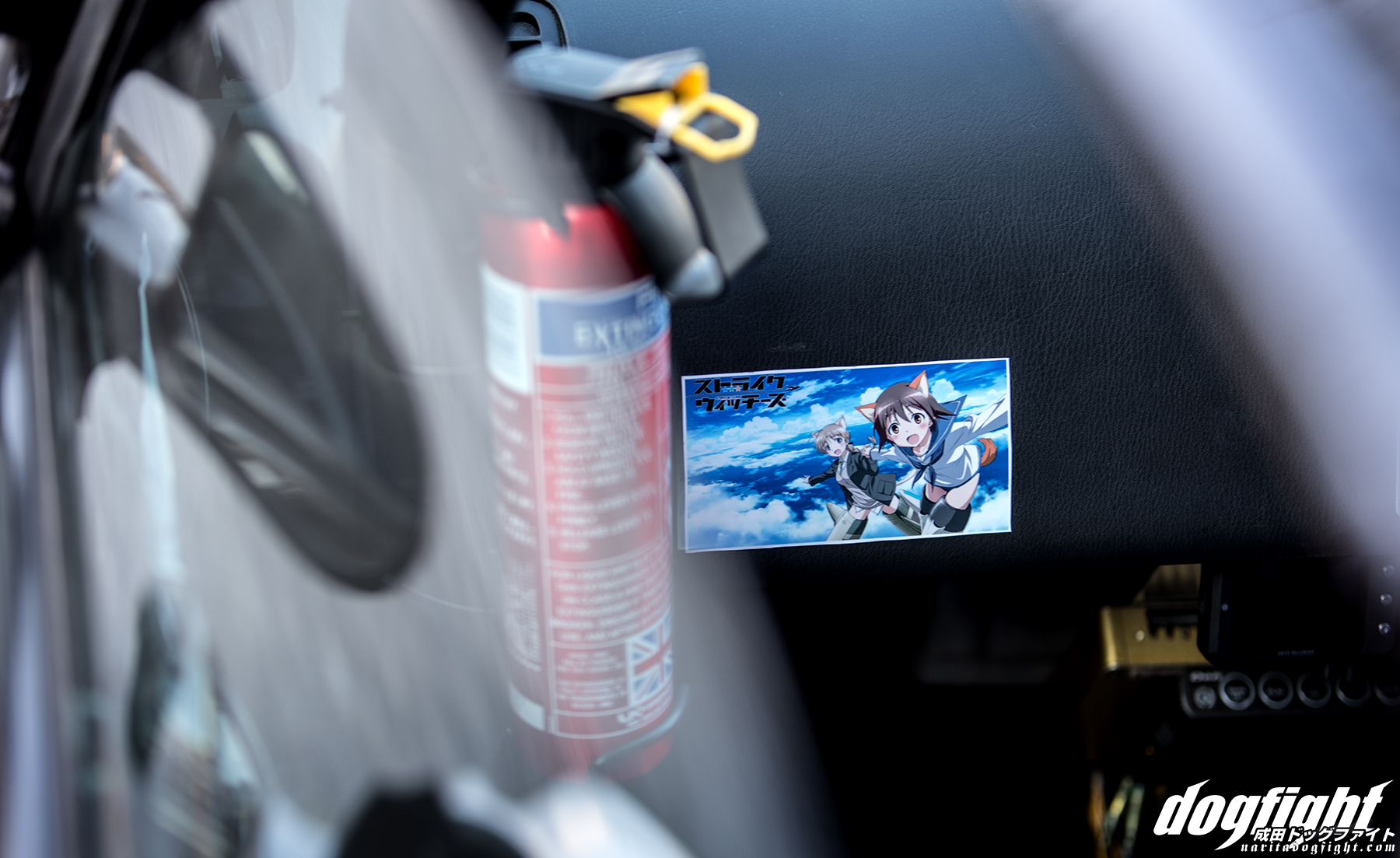 Igarashi is a fan of the anime ‘Strike Witches”. The series revolves around teenage girls who use machines attached to their legs to do aerial combat.  I’ve never seen it, but it sounds very Japanese if you know what I mean. 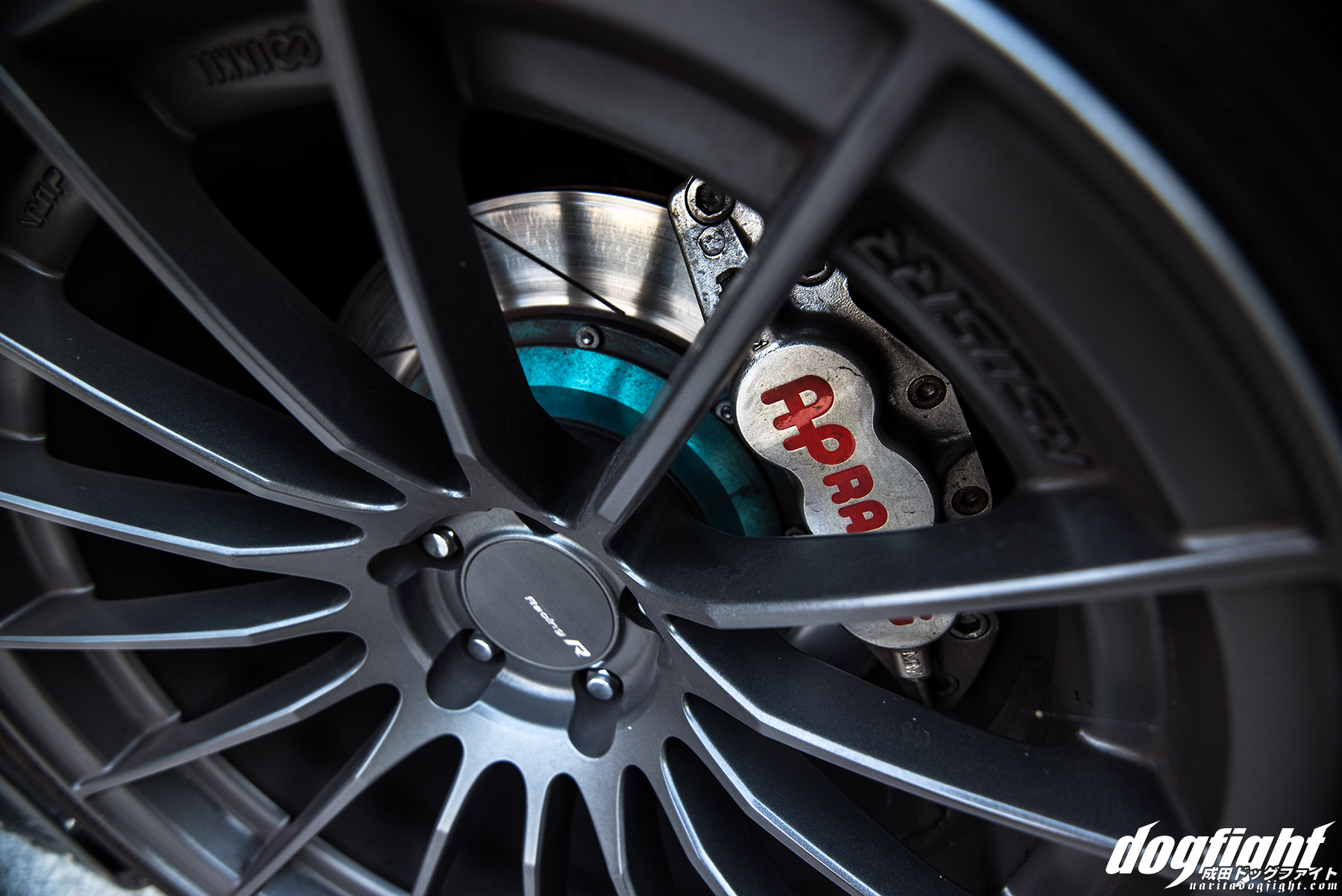 Enkei RS05RR wheels in a gunmetal color are a nice choice for the deep Midnight Purple of the car.  Igarashi likes the compound of the Advan A052, and somehow manages to fit a 315/30/18 in the fender wells of the Skyline.  Front CP 5555 and rear CP 5200 AP Racing brakes, with Project Mu rotors and pads get the job of stopping the car done proficiently. 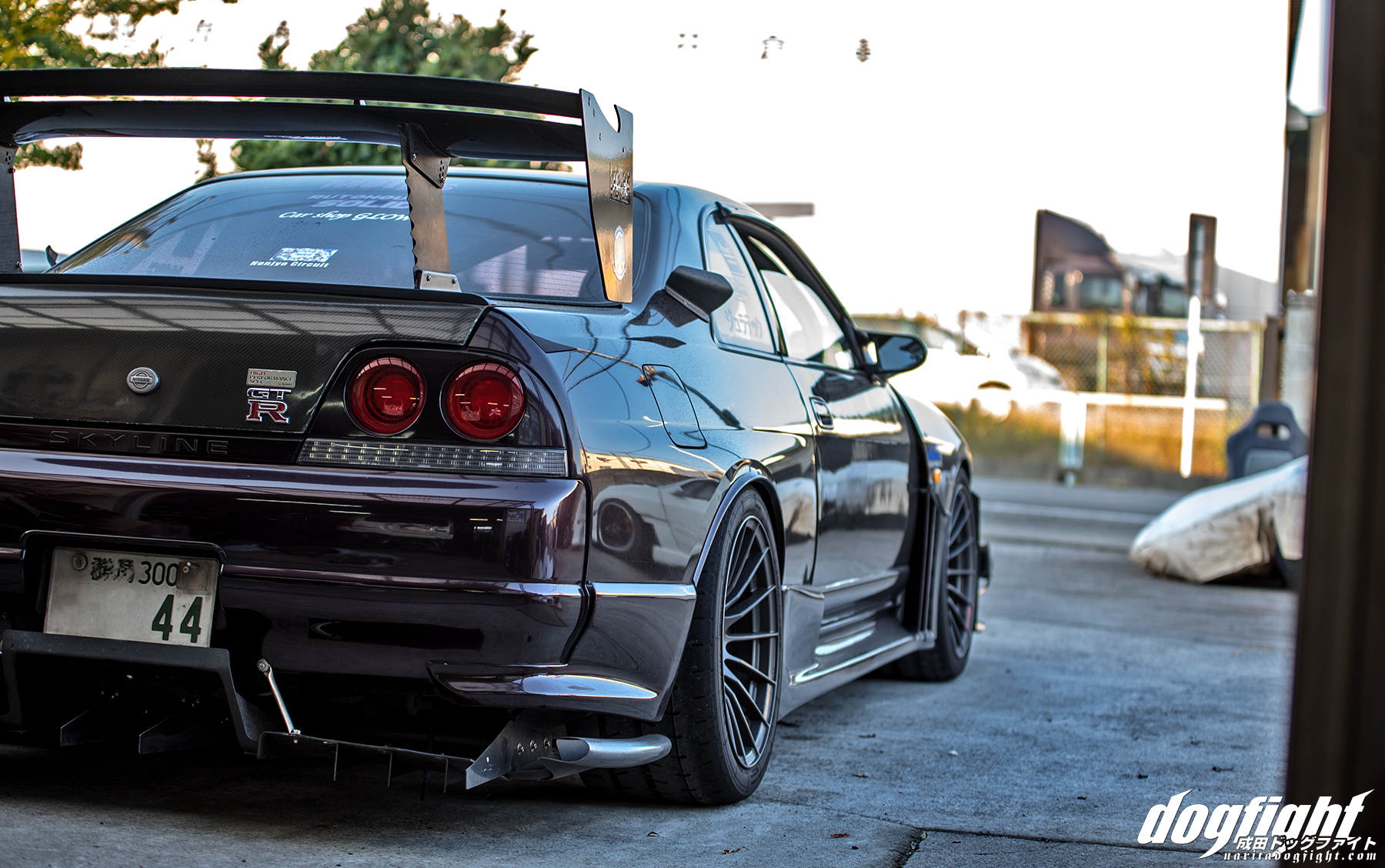 The whole package is a great example showing that you don’t have to submit to popular opinion to build a car all your own.  In fact, if this is the result, I’d encourage it.  Good luck to Igarashi this month in hitting his personal lap goal! 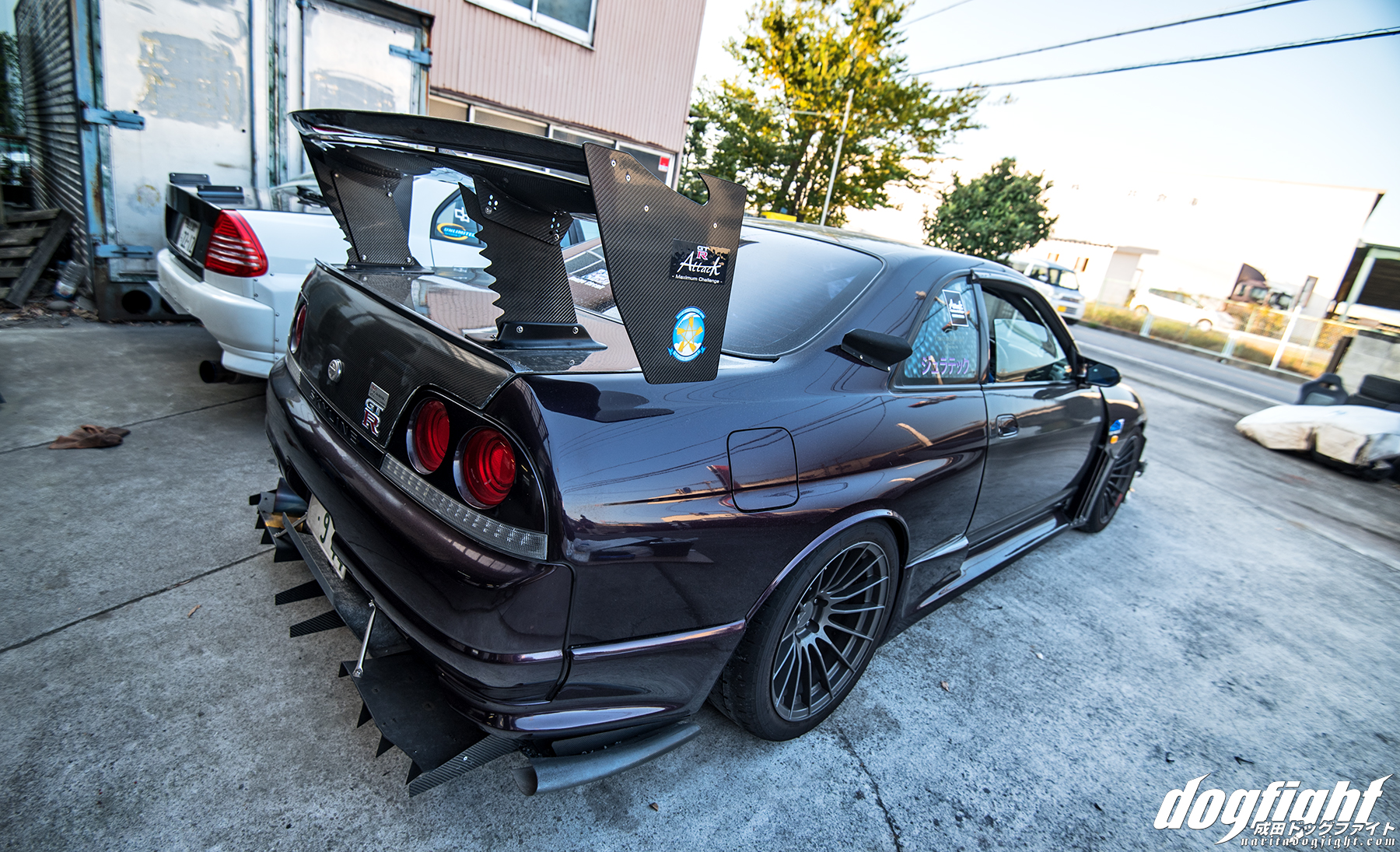