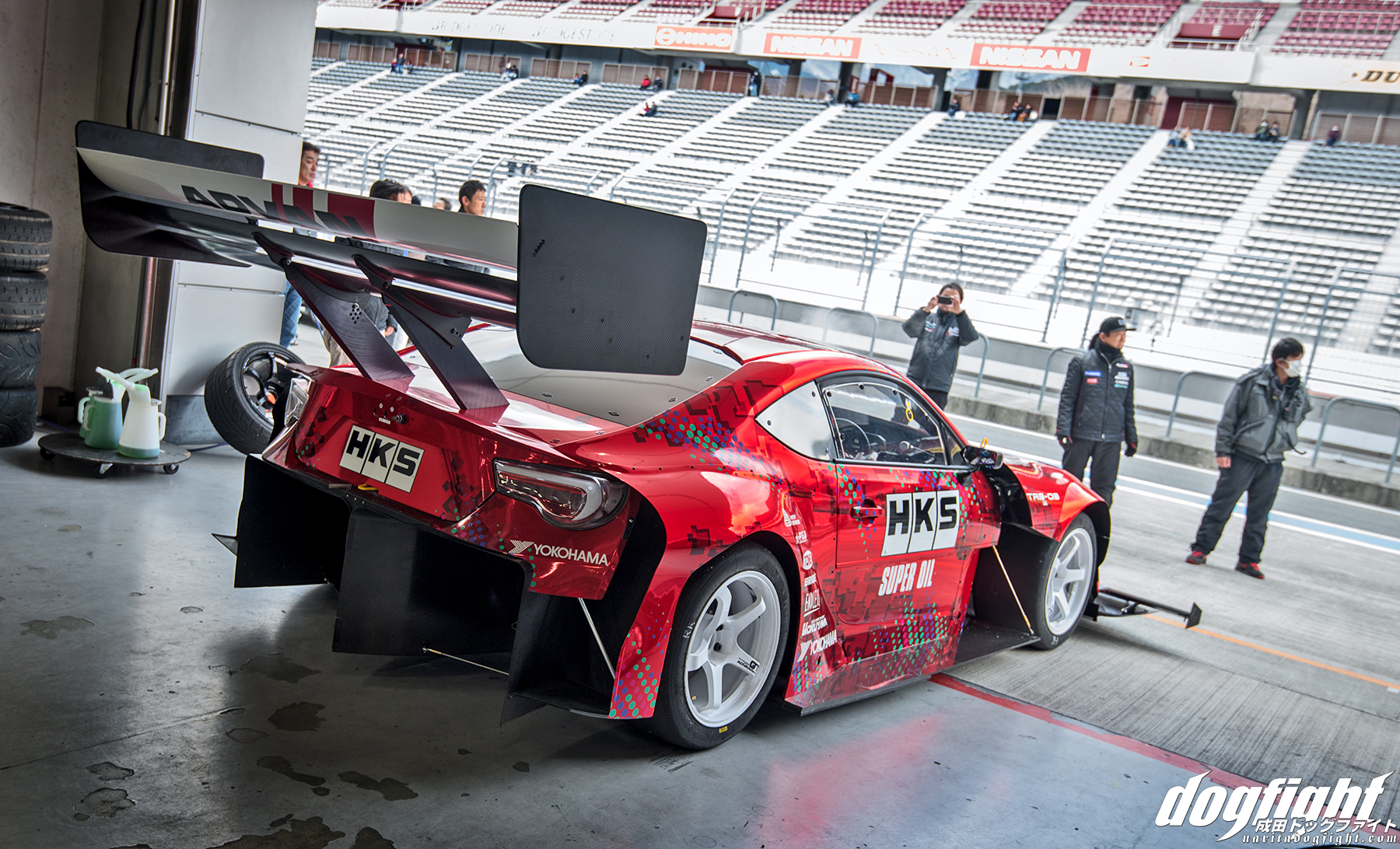 There’s no doubt that, in Japanese motor sport, one name stands out among the rest.  In almost everything they do, they need to be on top.  The fastest, the most advanced.  HKS will stop at nothing to collect these titles, and the TRB-03 has become their newest vessel to achieve them.  The company has enveloped it’s priority in the project with the goal of being nothing less than the fastest around Tsukuba’s TC2000.  It was even re-branded as the ‘Tsukuba Record Breaker’, from it’s original designation as the GTS800; a tip of the hat to it’s capped power level (which is debatable…).  The car has been through extensive testing over the past year, and last weekend at HKS Day, I was able to finally get a closer look at it. 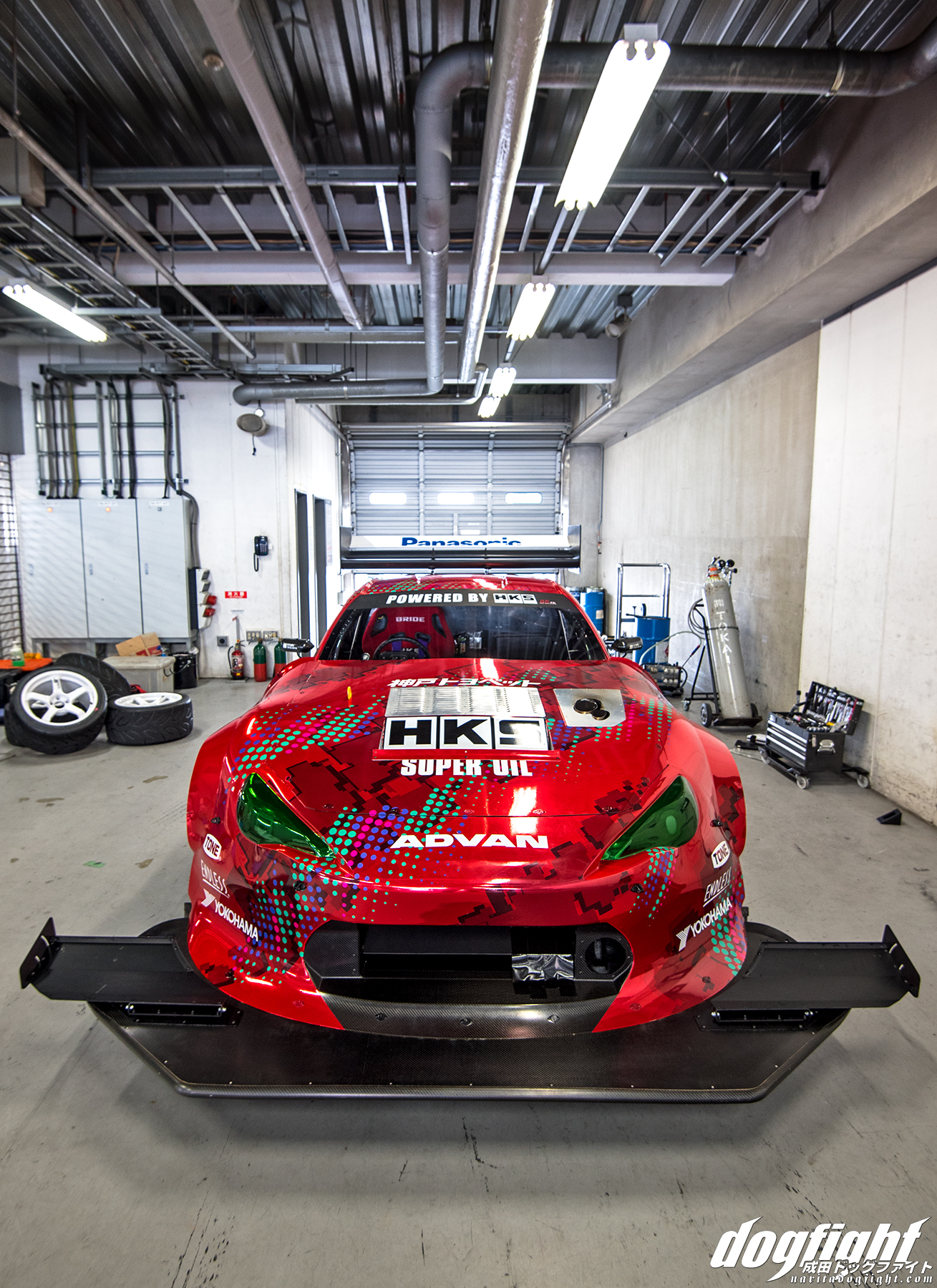 During this year’s HKS Premium Day, HKS gave Taniguchi the reigns to the 86 for a couple exhibition laps around Fuji Speedway.  I was sort of expecting this, as initially it was just to be on static display, but I was pleasantly satisfied that they actually did.  I hovered around the garage area while they were moving the car in from outside and was lucky enough to catch them heading out to track.  This car has been shrouded in a cloud of secrecy since it’s inception, and I was very keen on getting a better look at the details.

I’m a pretty big fan of the underdog when it comes to motor sport.  It even pains me to think that HKS can hit the now coveted 49 mark before Under Suzuki.  I would be naive though, if I didn’t recognize that as a very real possibility.  The simple truth of the matter is that HKS is in a much better financial situation to be funding such a project.  Keep in mind, HKS is much more than a tuning company; they are a global powerhouse in the automotive and transport industry with nearly 140 million USD in business capitol.  They produce ISO9001 quality OEM parts for various manufactures, provide Bi-fuel and CNG solutions for logistics companies, produce LS Aviation prop engines, as well as their world-wide parts distribution.  Not that they’re working with unlimited money, as I’m sure they have a budget too, but to achieve an unofficial lap time of 50.259 in just under a year and very little time on track is a testament of both their mechanical prowess, and their ability to afford the time in which it takes to do so.  With ‘NOB’ Taniguchi behind the wheel, and the most advanced aerodynamics and mechanics in play, it’s no wonder HKS has gotten to where they currently are so fast.

In hindsight, it’s an incredible testament to Under’s driving ability.  His S15, while equal in power (give or take), is sporting somewhat old aero.  While Andrew Brilliant of AMB designed both kits being used, the technology and knowledge of aerodynamics on these types of applications has advanced so quickly that the Silvia’s aero is rather outdated.  Remember it was designed back in late 2015.  The ‘Infinity Wing’, pioneered by Andrew, that is sported on the HKS car is an entirely new step deeper into the field.  For whatever reason, HKS opted to remove the Infinity Wing from the car for the Fuji exhibition laps, opting instead for a rather crude reiteration of side splitters.  When I posted the video on our Instagram, a few users responded by saying that they changed it to better suit the front straight.  Whatever the case, Andrew Brilliant had mentioned that it did more harm than good, and that the car suffered from increased drag, and that Taniguchi mentioned the car was understeering much more than normal. 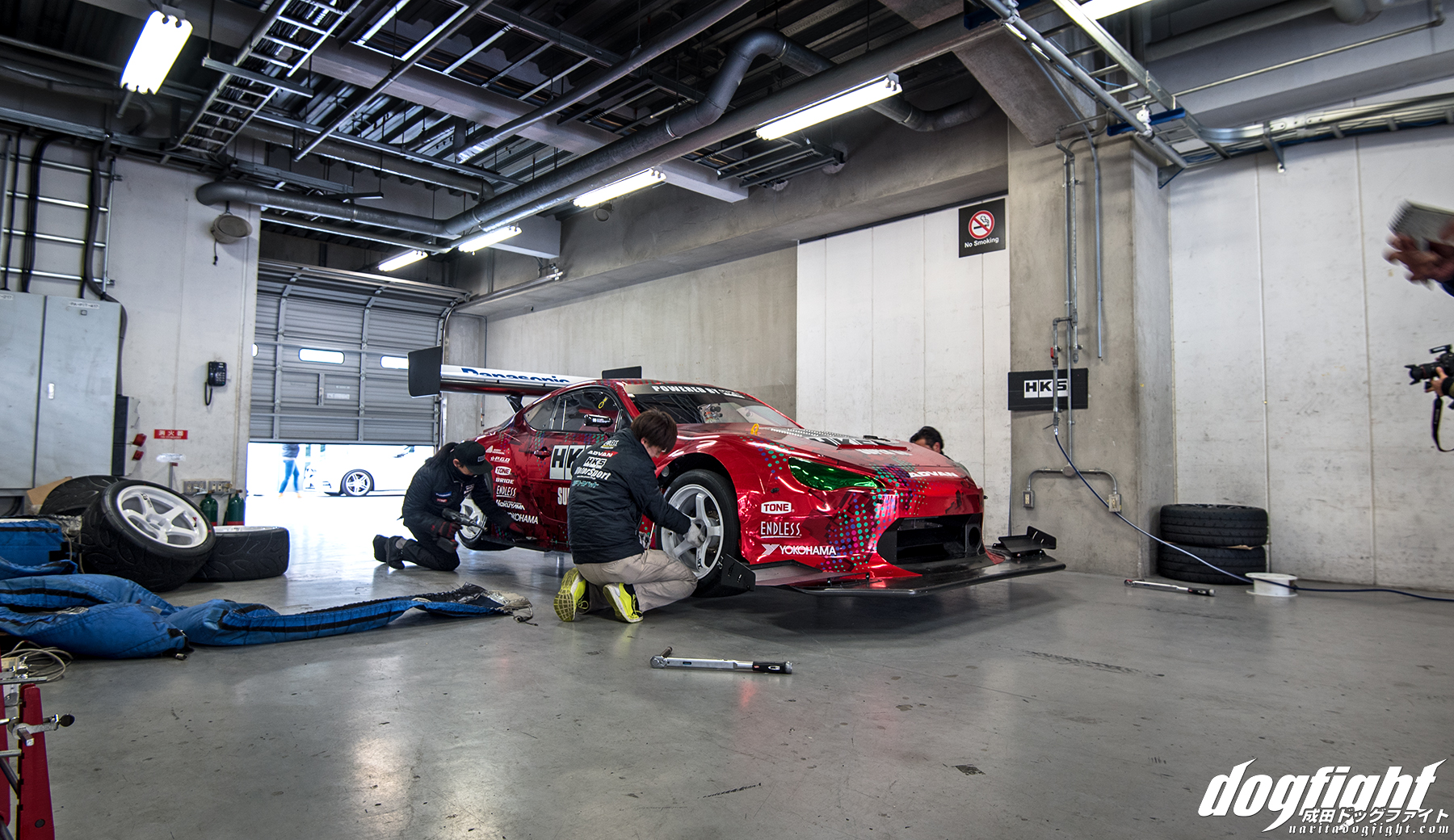 The time they set in December, being almost a hundredth faster than Under’s, was set on Advan A005 tires; which is a slick compound.  This is a huge fact of contention in the community, NDF being no exception, however after speaking with a few people this past weekend, I understand why this may be a little more clearly.  Whether it’s an excuse to use a faster tire, or a legitimate concern is still up for debate.

The intense amount of downforce that these aero kits are making puts a very increased amount of stress on the tires causing much greater deformation than normal conditions.  All of a sudden, vertical and lateral sidewall deflection solely due to aerodynamic grip becomes a factor.  S-type tires weren’t necessarily designed with these stresses in mind, and as you’ll see shortly in our coverage, or may have already seen from other sources, this very topic became an issue for Garage G-Force at HKS Day when they suffered a burst tire towards the end of the main straight.  Initial speculation was that the shear speed the EVO achieved, due in part to Fuji Speedways lengthy front straight, increased the downforce that the Voltex kit made enough to push the body into the tire shredding it.  Some cited too soft of springs, despite them running somewhere in the range of a 38k-42k weight front spring.  What actually seemed to have occurred though, was that the downward force generated at those speeds simply was too much for the tire to withstand.  If that truly was the case, then what HKS had reasoned initially isn’t really up for debate, and actually was great planning on their part.  Tsukuba’s straight is much shorter however, and whether or not the TRB-03 can achieve that kind of downforce at a much lower rate of speed has yet to be seen.

My personal guess?  It’s not an issue at TC2000, and they are simply using a faster tire to hit their mark first.  Although my friend Amemiya disagrees with me…do conspiracy theories in time attack exist? Is this the first?  I suppose while we’re on the topic, I don’t think the engine is capped at 800ps either… 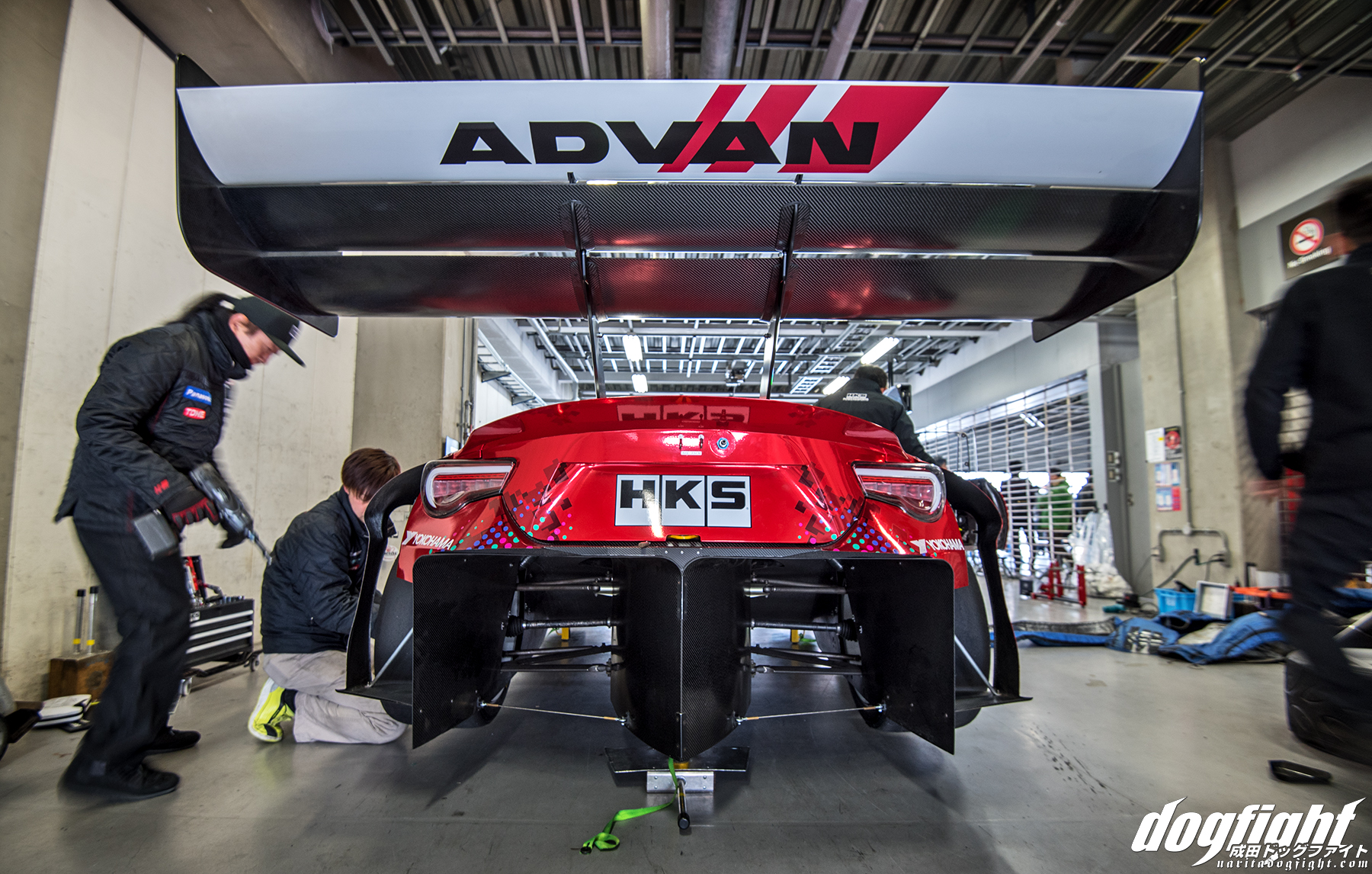 As a result of their 13 months of testing both on and off track, several modifications have been made in order for them to hit this target.  Most notably, however, is their recent change in power delivery.  The stroked, 2.5 liter 4U-GSE Boxer that was equipped with an extensively modified HKS GT Supercharger kit, now features an HKS GTIII-5R turbine; the successor of the wildly popular T51.  A turbine that has no problems generating power well above the 800 mark.  It’s also worth noting that the time they set at Tsukuba, the 50.259, was set with the current engine setup; meaning they realized early on they weren’t going to be as competitive with the supercharger.  During the hot laps, the car was running on alcohol.  When I said HKS is pulling out all the stops, I’m not exaggerating. 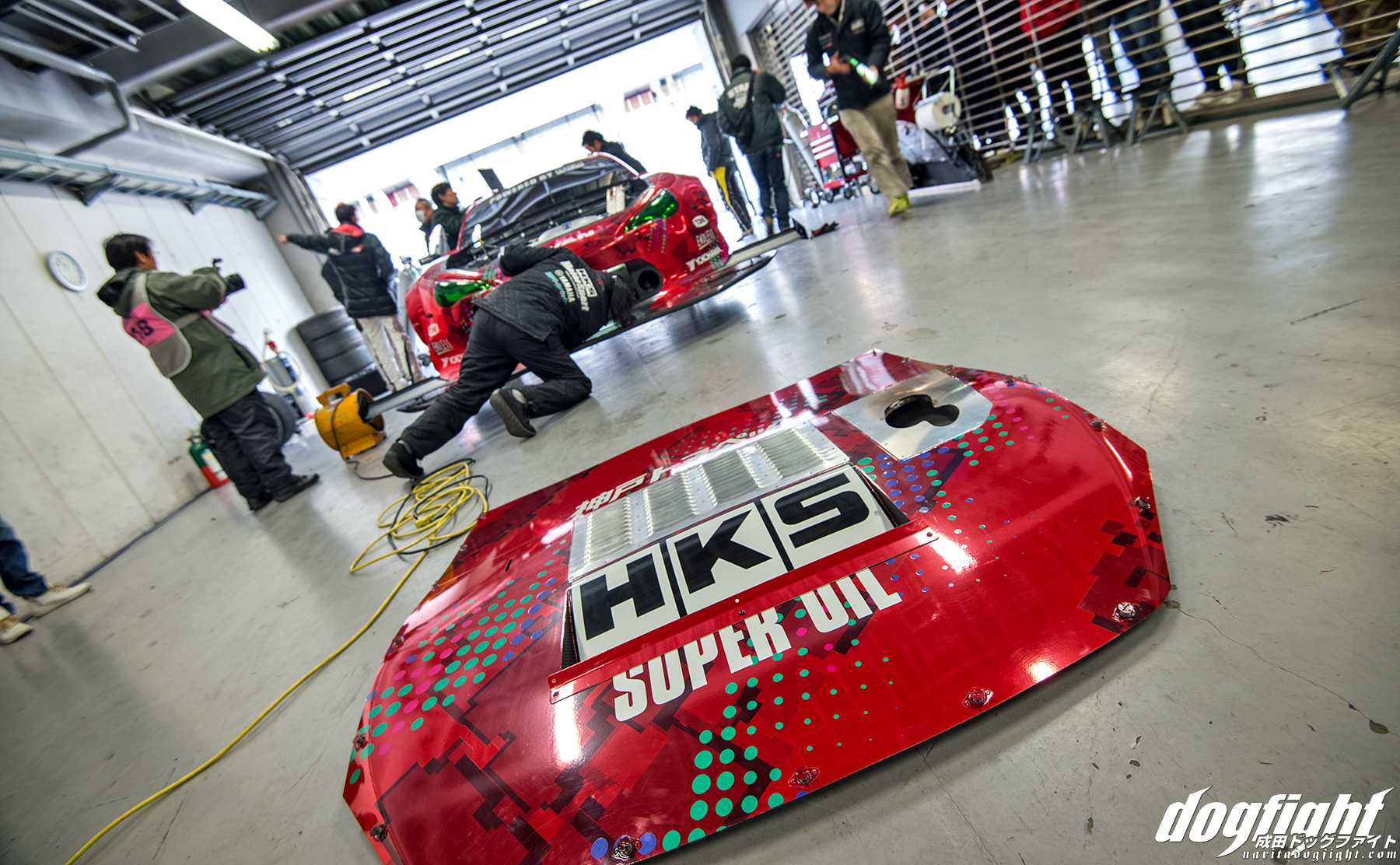 When NOB initially came in from his laps, I believe he completed 2 full, the car was smoking profusely.  I’m not sure what it was from, but the techs from HKS got it in the air extremely fast and began frantically searching for leaks.  I don’t think it was a fluid issue, but perhaps hot brakes or the exhaust burning off something.  I never found out what it was and after about 10 minutes it seemed like it wasn’t a concern anymore. 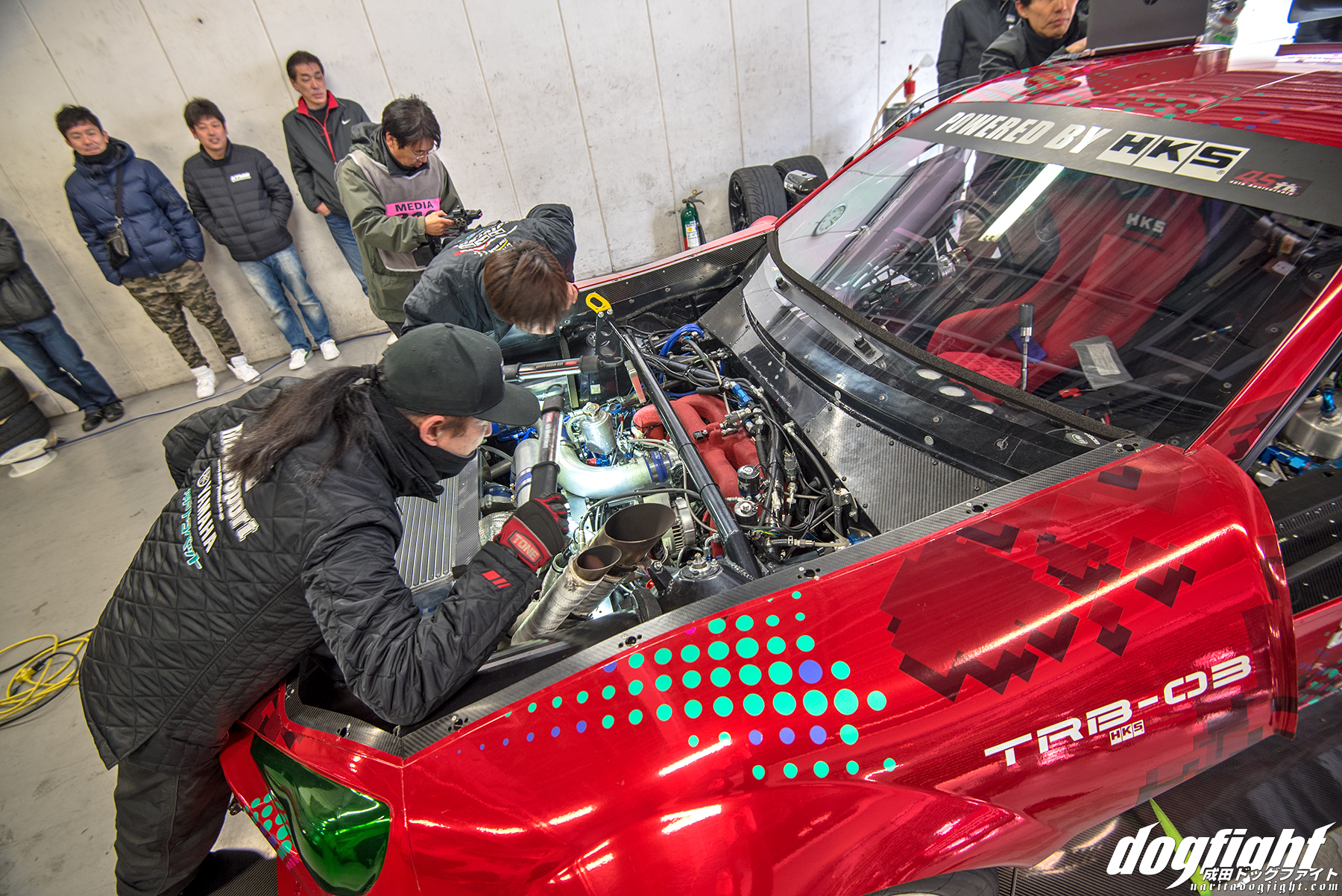 It almost looked like Taniguchi was concerned he broke something.  He had a pretty worried look – or maybe it’s just because he was over worked that day! 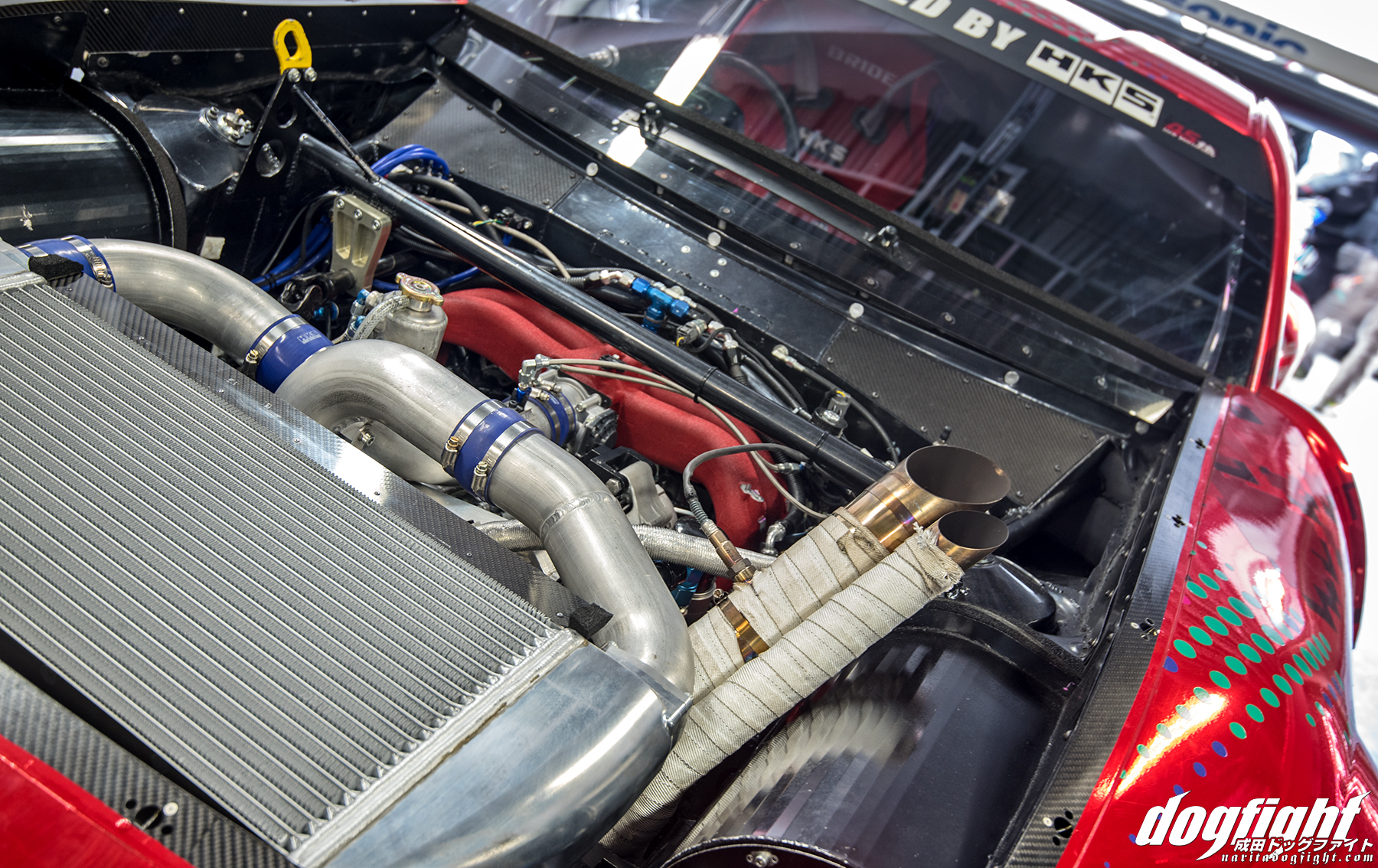 A bit closer look at the turbo piping… 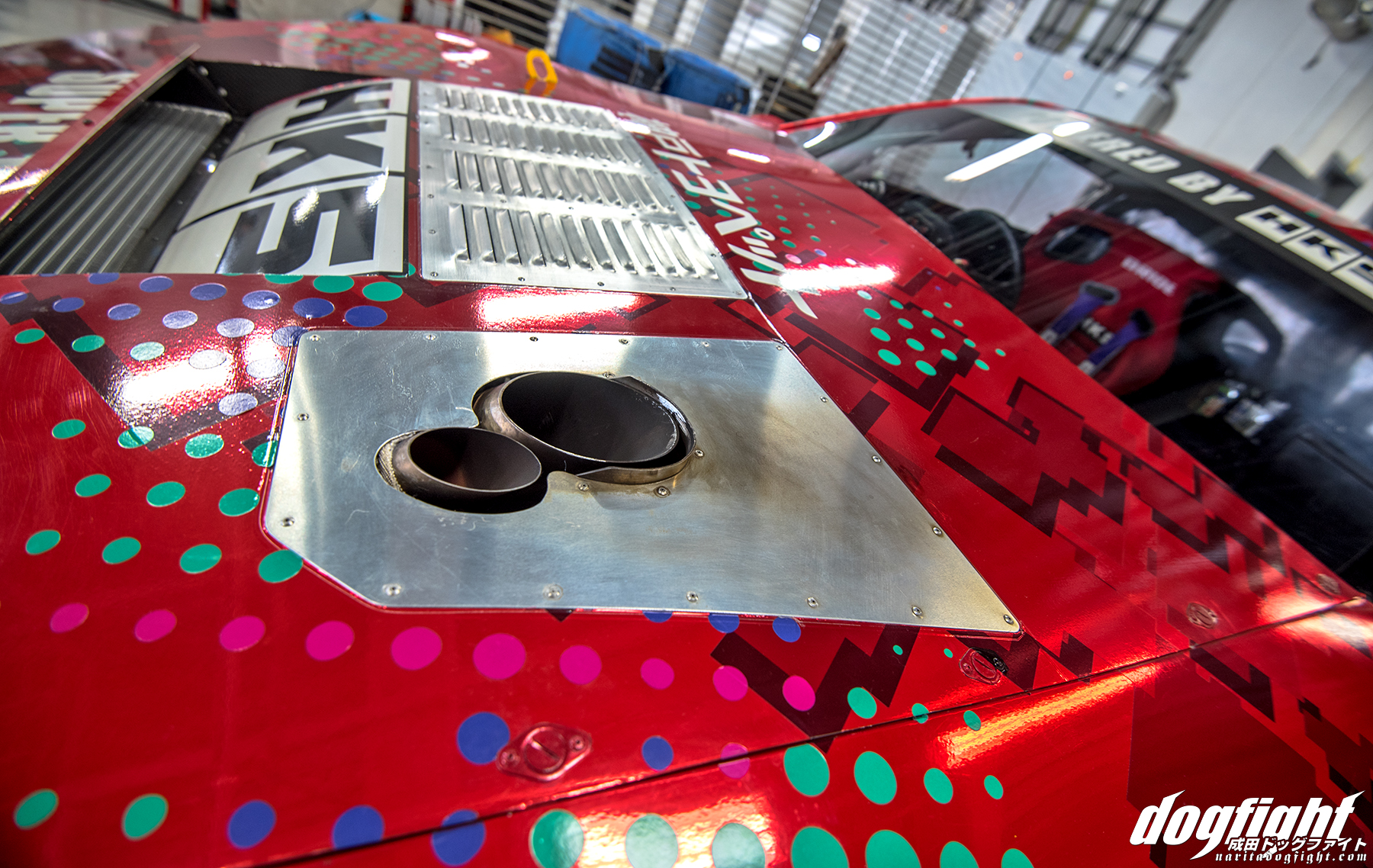 …and the new hood cutout and added cooling louvers. 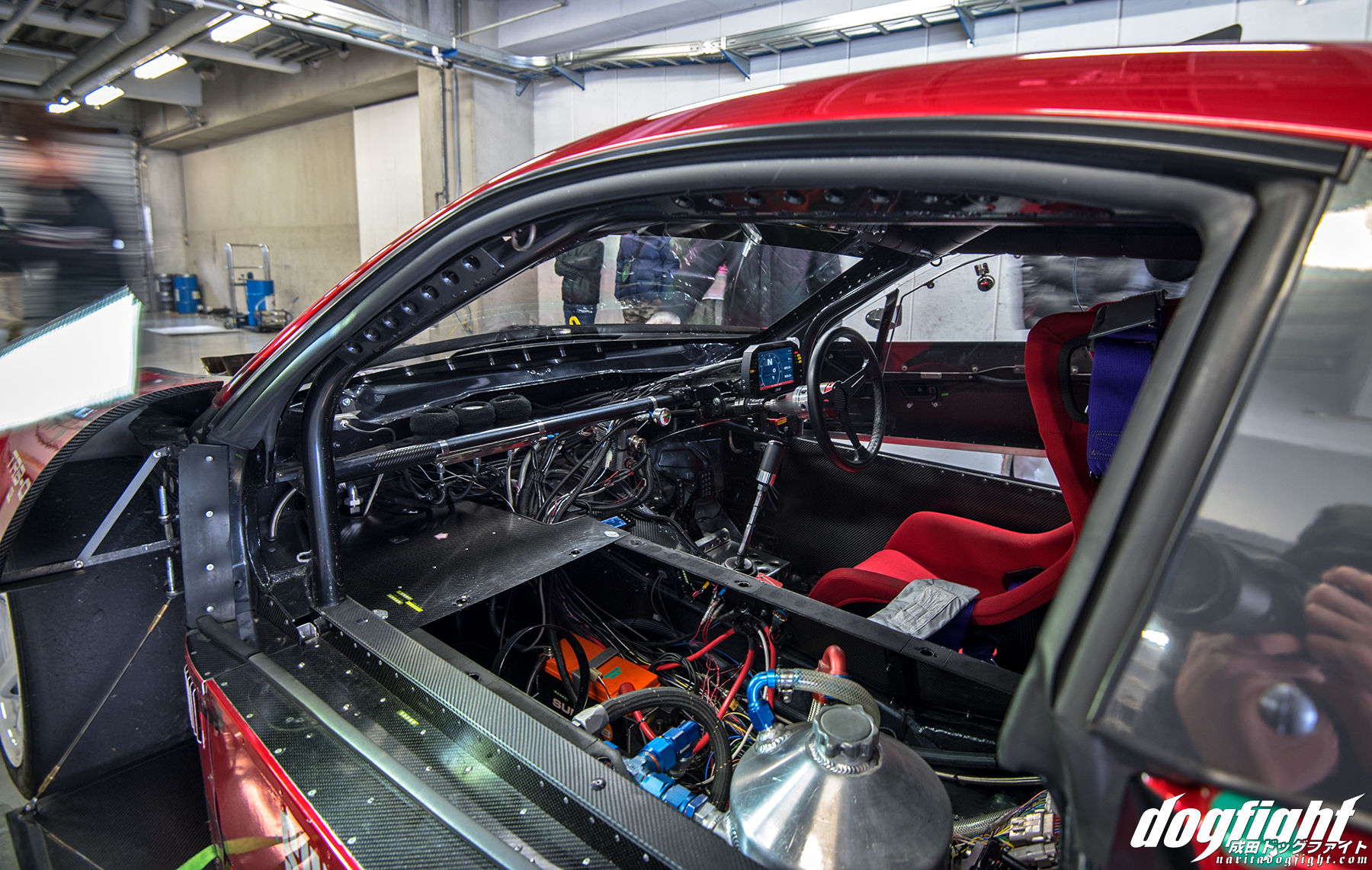 The interior has been relatively unchanged.  There are some really detailed photos of the interior on Speedhunters when it was first unveiled last year if you’re interested.  I didn’t want to get in the way of the techs to grab any. 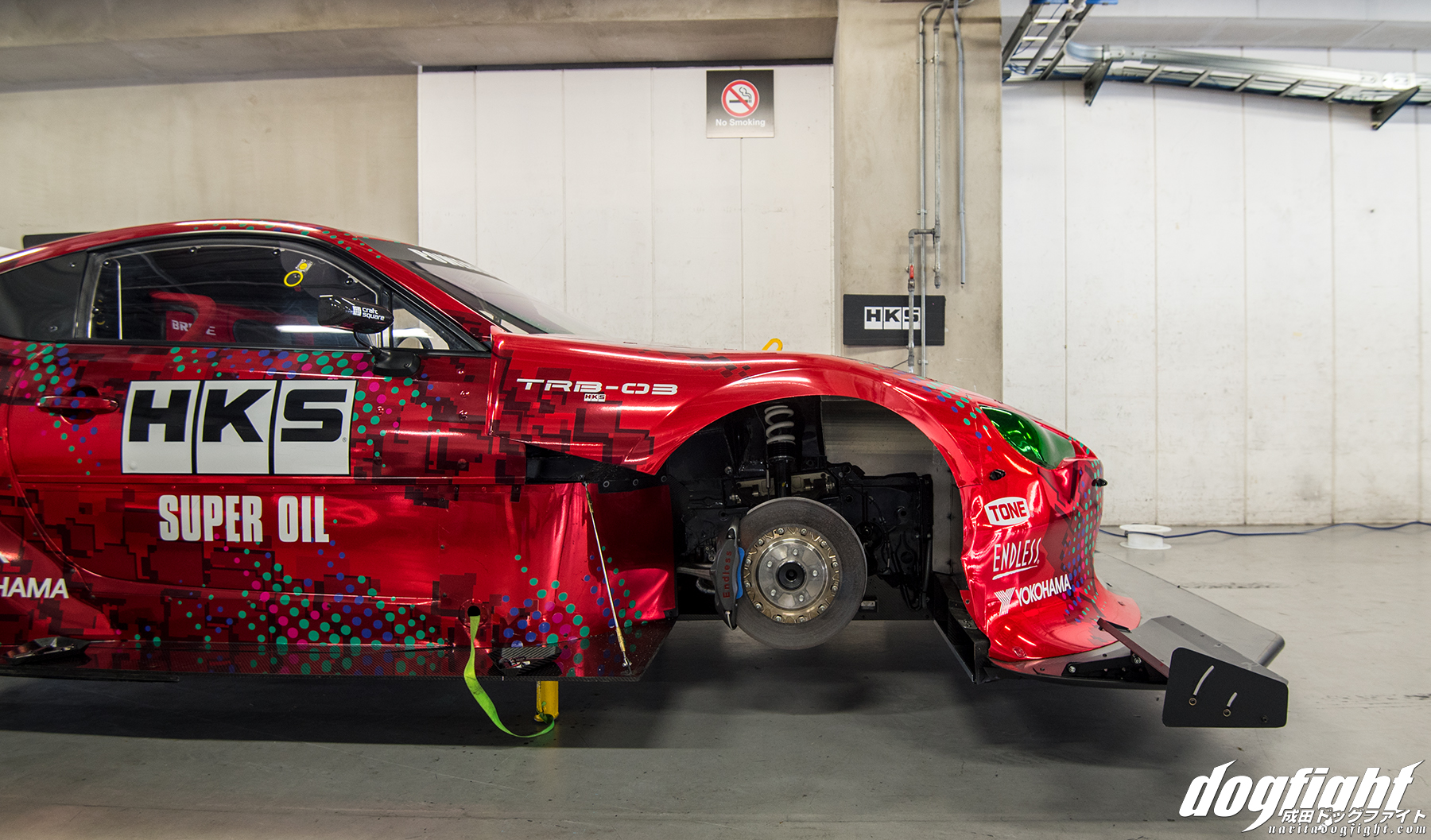 HKS dampers with custom valving and very stiff springs keep the car stable at speed and provide a very careful balance of absorption and support. 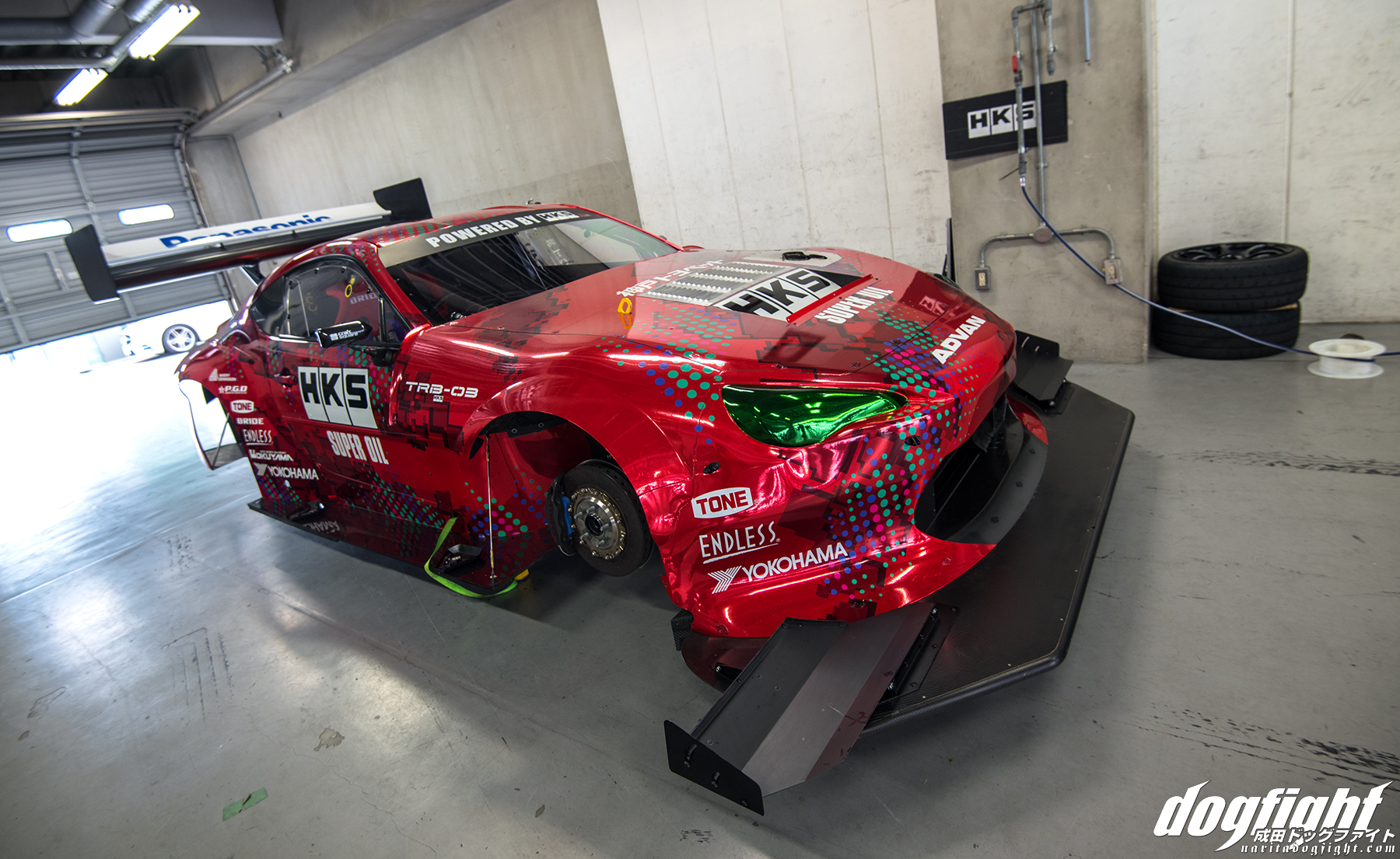 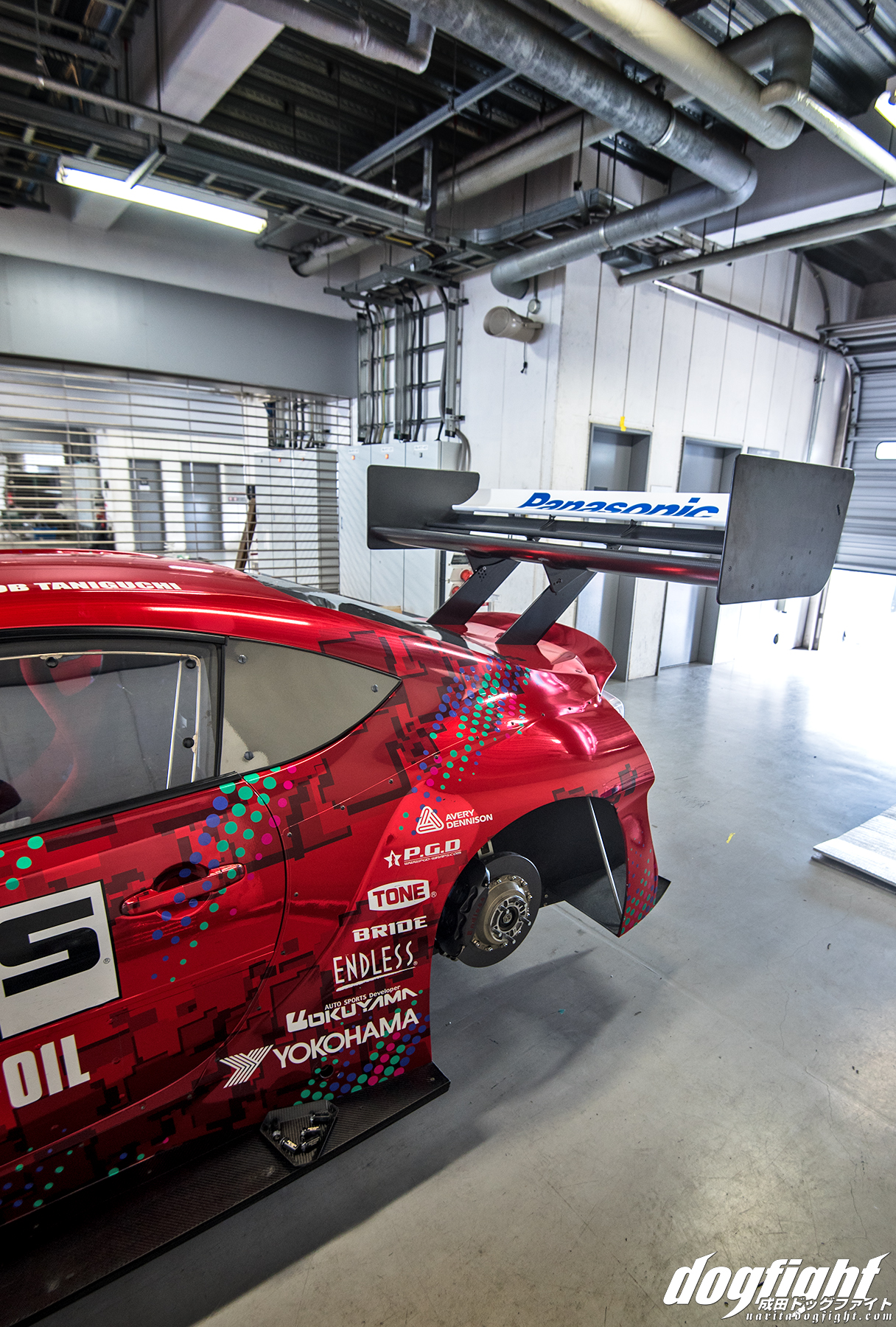 Sweet carbon lug nut tray.  Huge end plates grace either side of the triple bladed GT wing to ensure that all the high pressure it generates stays up top where it belongs. 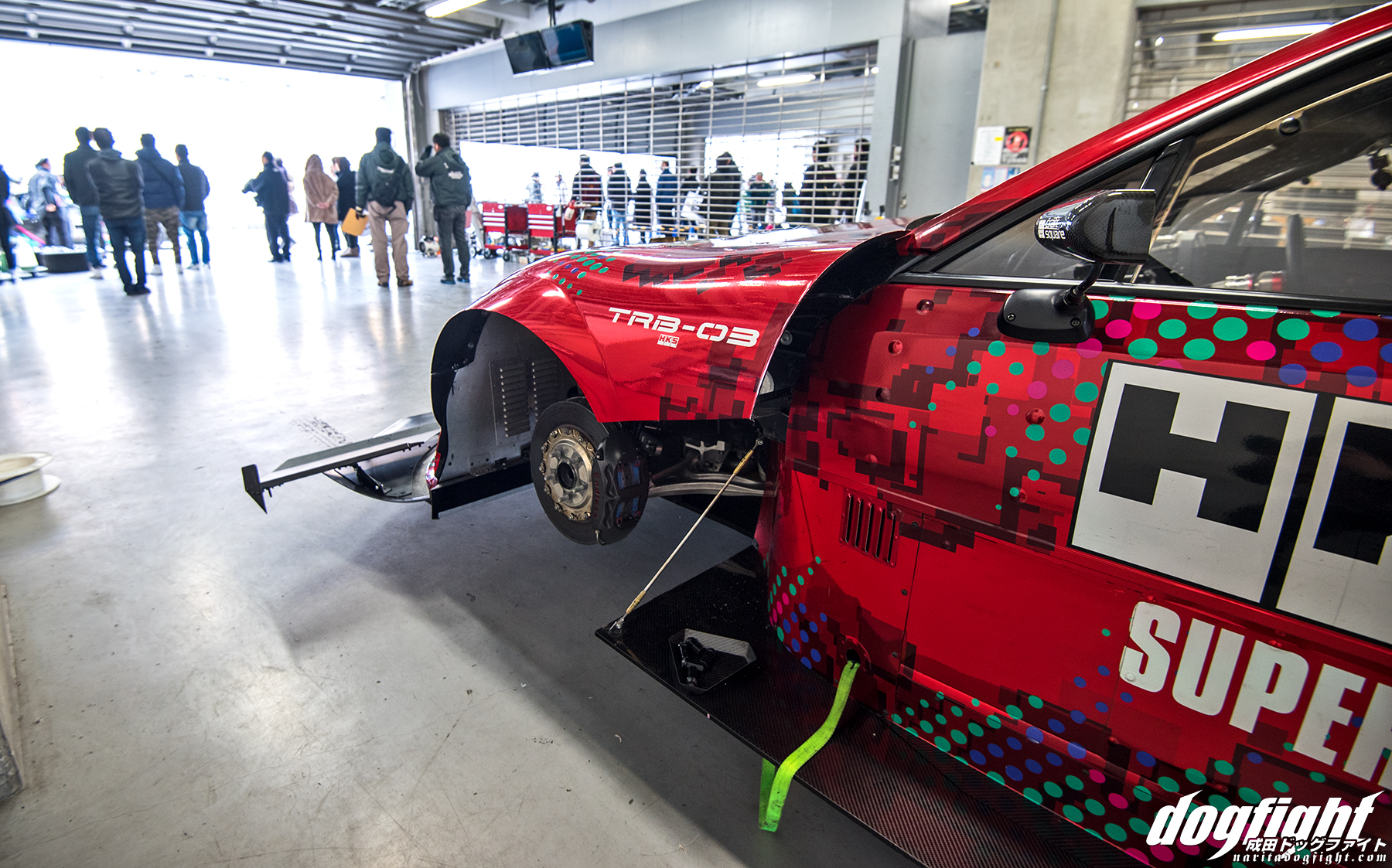 Beautiful looking body panels; individually and as a whole. 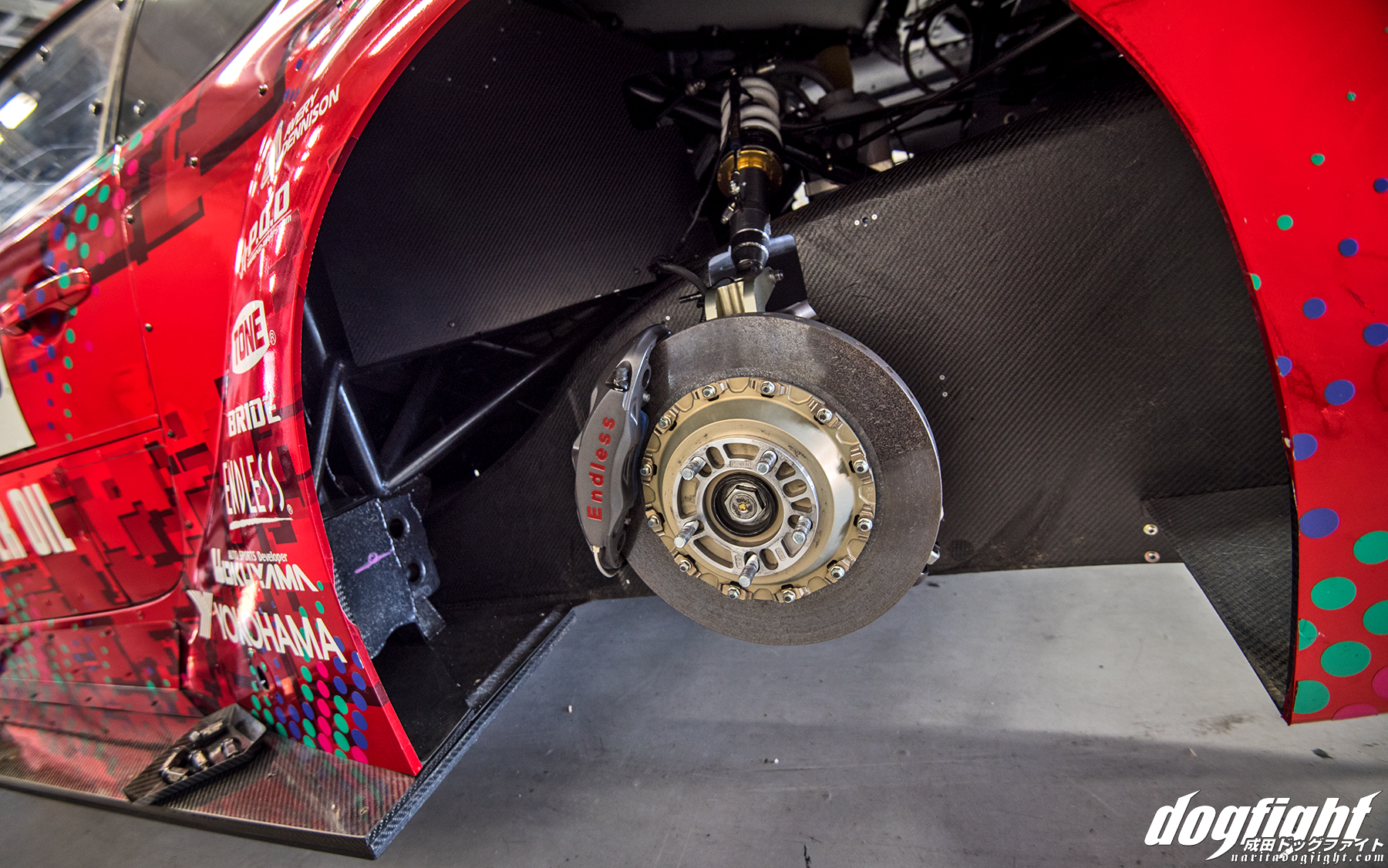 The suspension arms are custom all around, but the rear suspension is not what you’d typically find in the back of an 86, as the chassis has been totally modified to accommodate the aero.  I don’t have specifics, but there are other benefits of having suspensions mounted as such.  I’m not sure if this was the sole reason, or if they are gaining benefits similar to a push/pull rod setup with the strut being away from airflow. 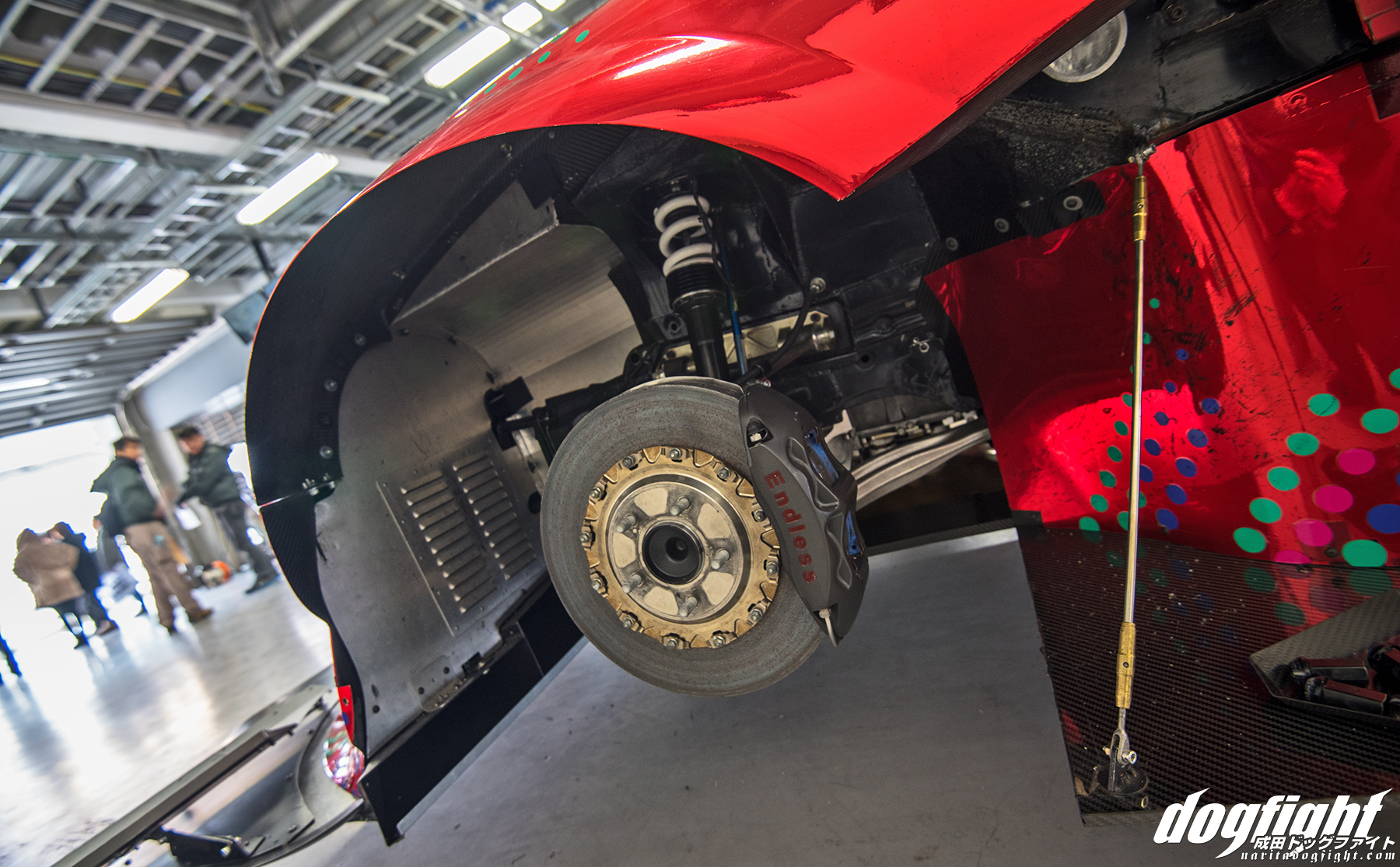 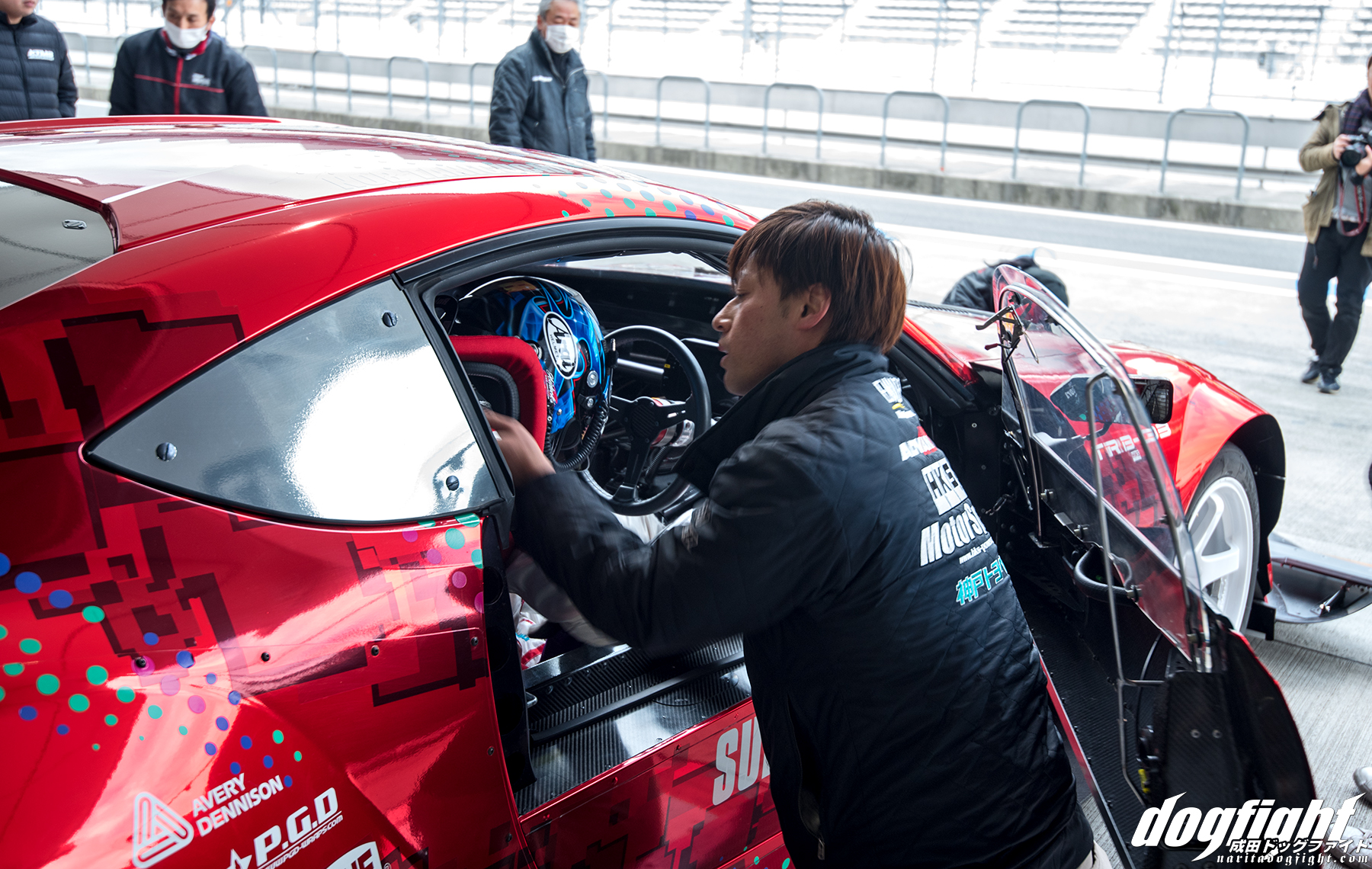 Taniguchi getting strapped in to take the car out for some exhibition laps.  No longer a stranger to the car, he seemed very confident.  Although that’s not saying much as the guy exudes confidence behind the wheel of any vehicle.

I took this shot while simultaneously taking this video.  Check it out to get a feel for how the car sounds with the new exhaust. 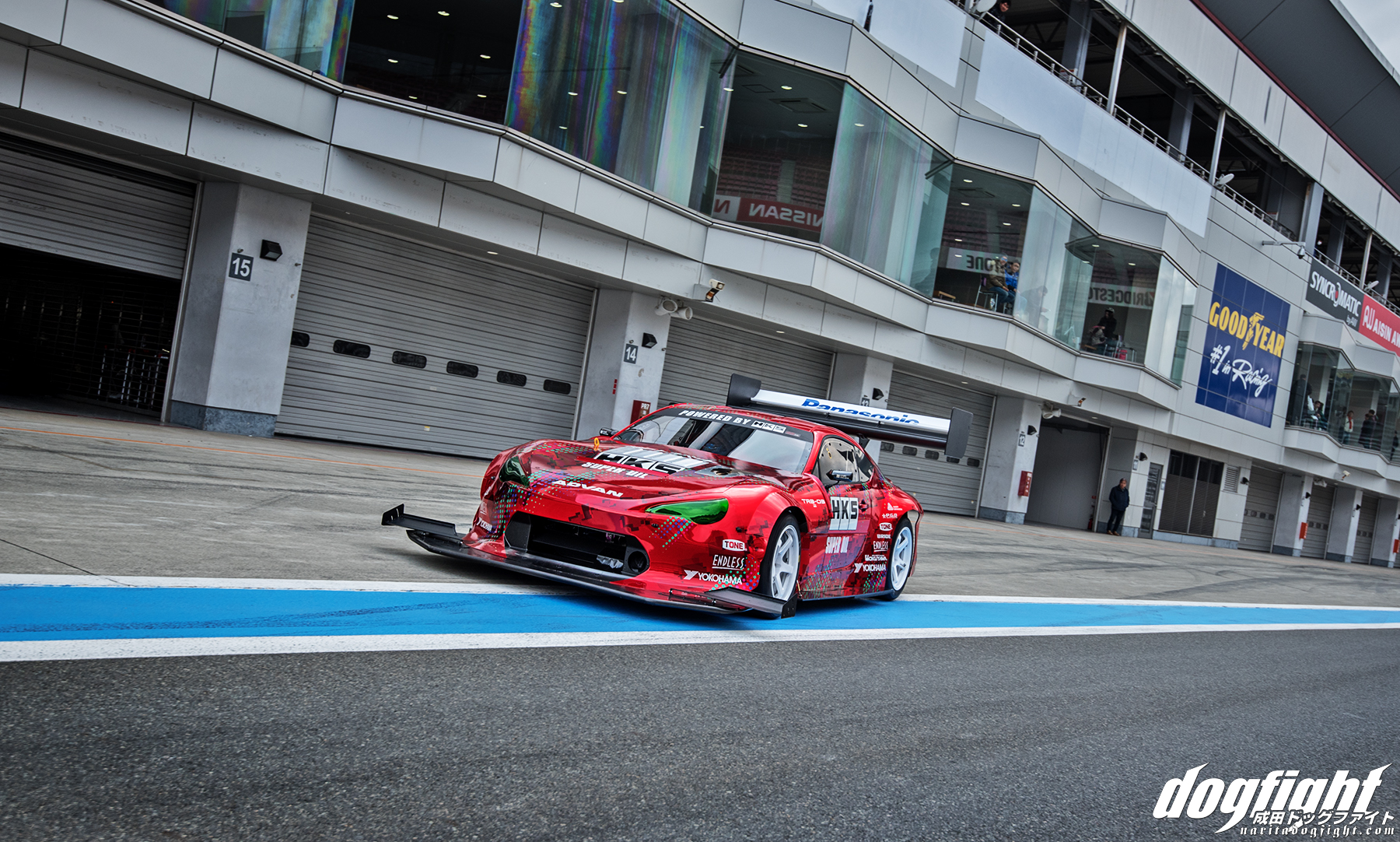 Heading back into the garage. 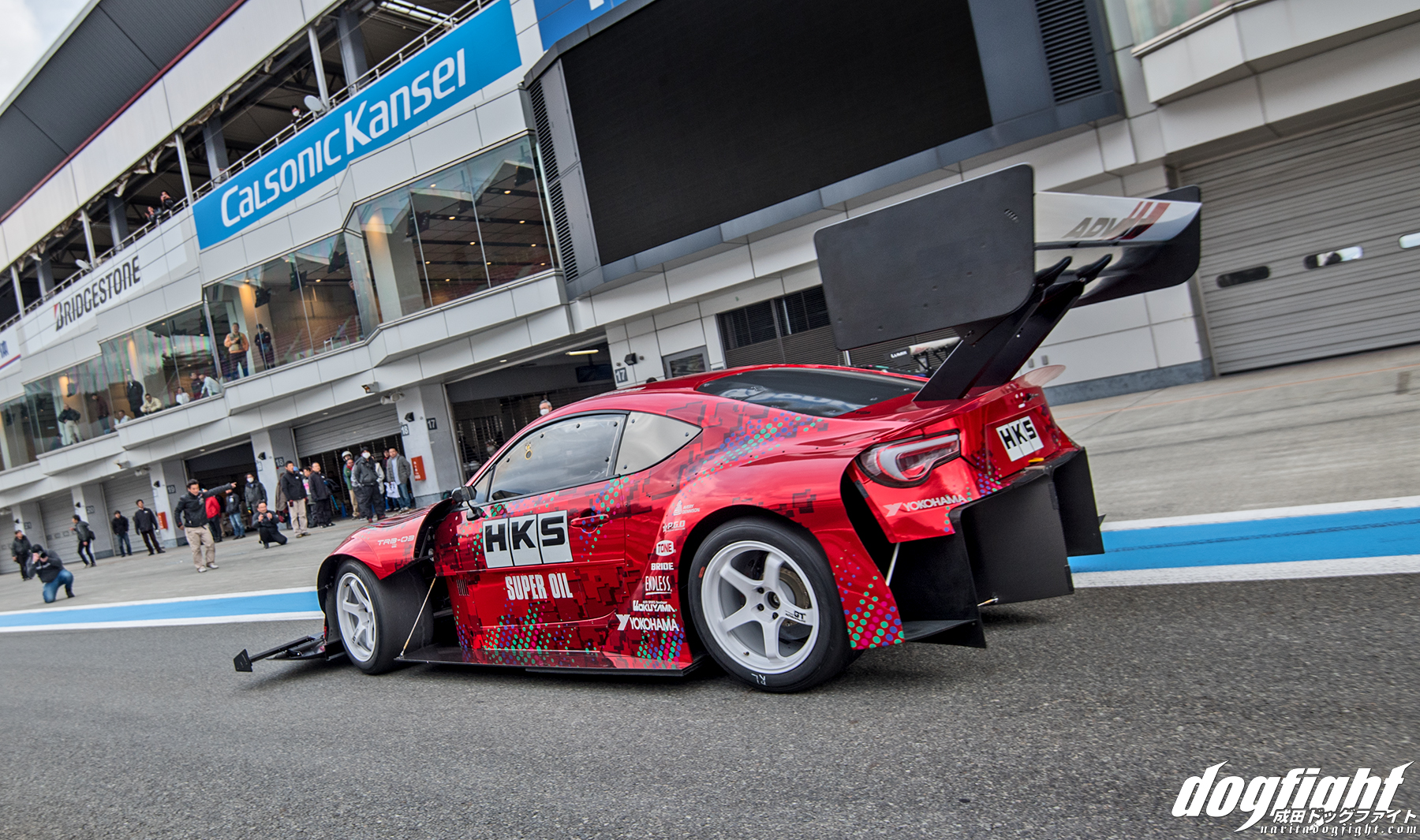 The car sounded amazing, just as it had a Tsukuba in December.  I’m curious to see if they’ll continue to develop it for other tracks after TC2000. 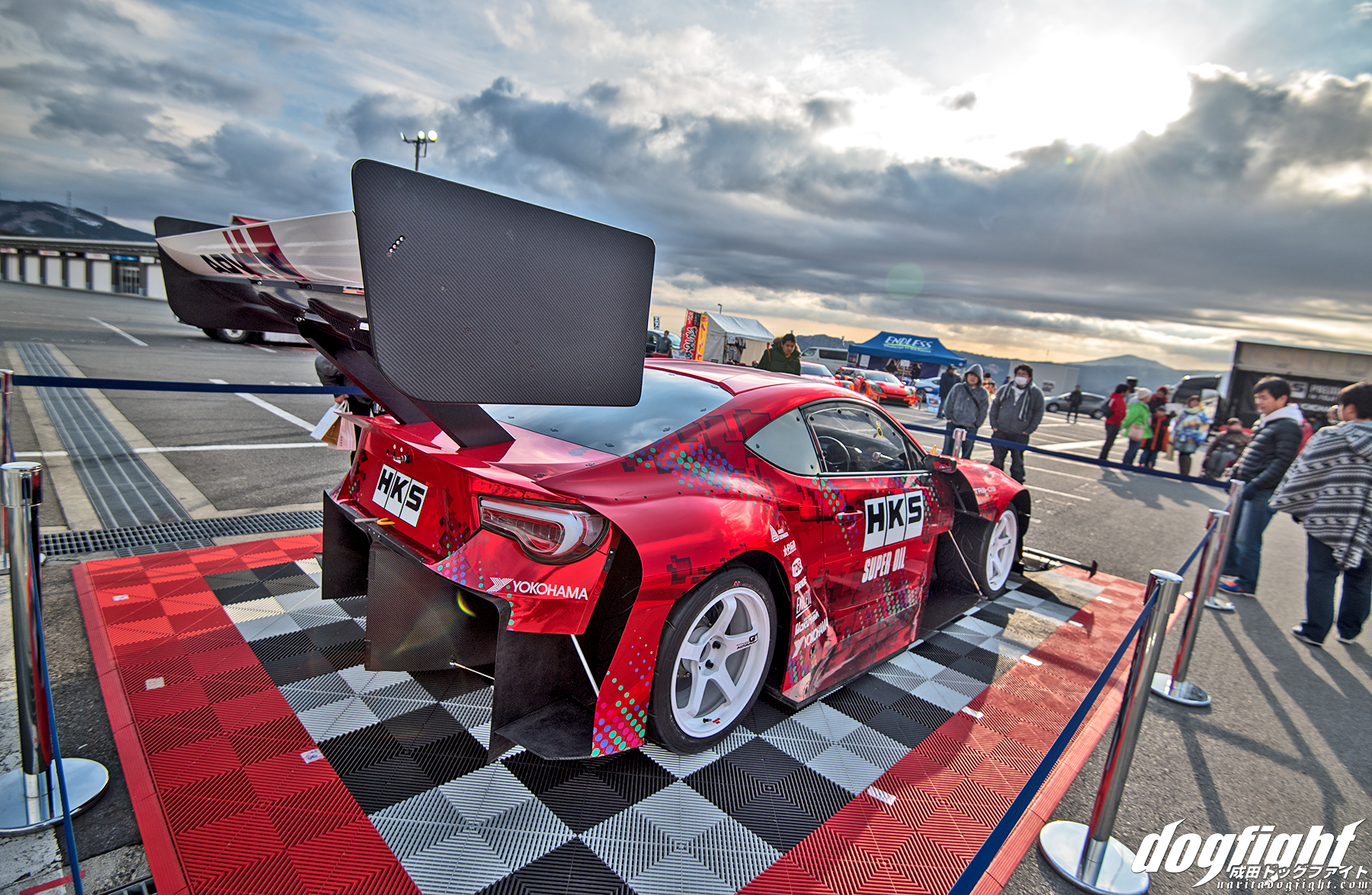 Back outside in the display area.  The car looks a little more subdued when its roped off. 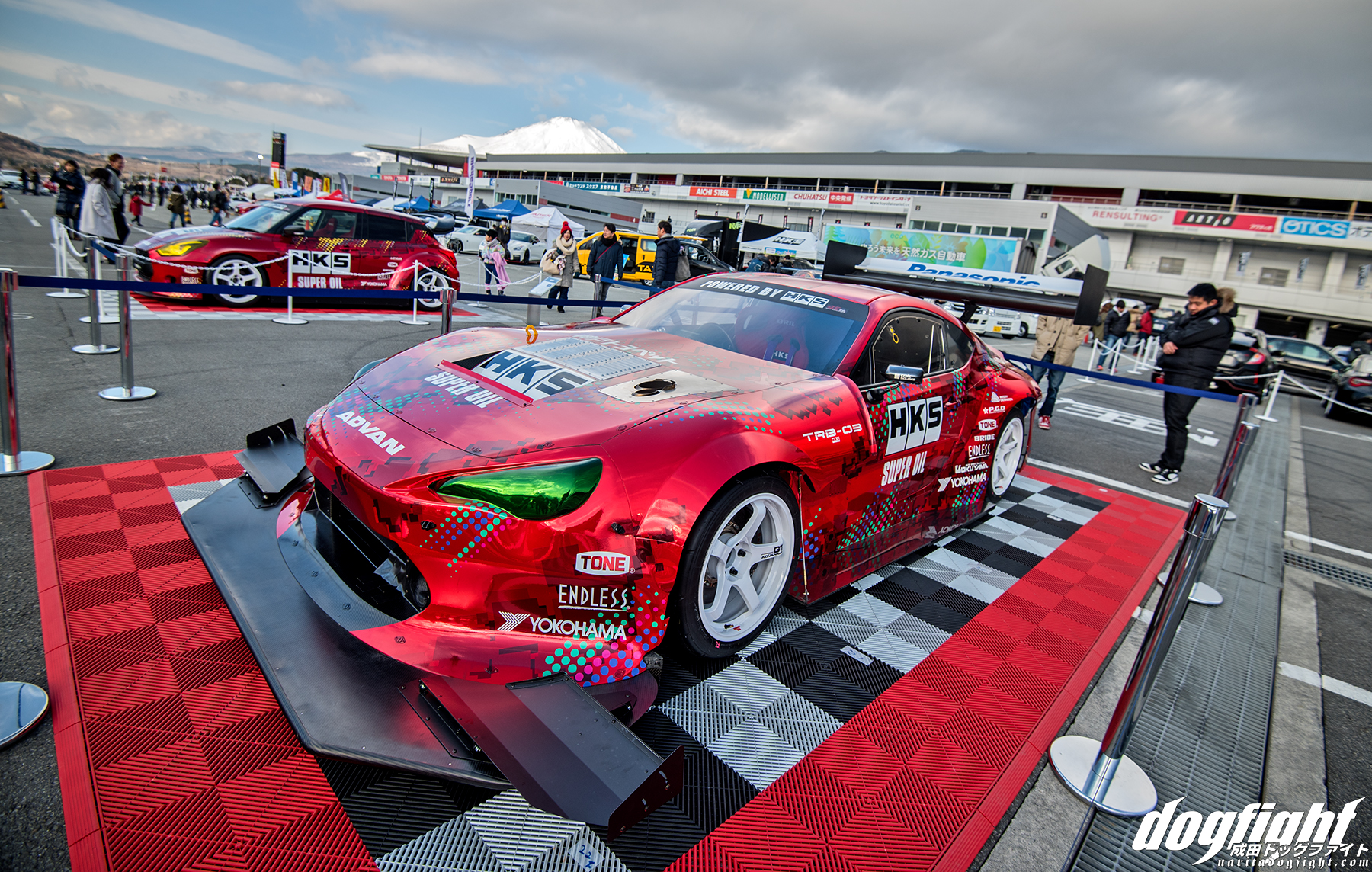 It really is an interesting modification to the front end…I’ll reach out to try and find out more information. 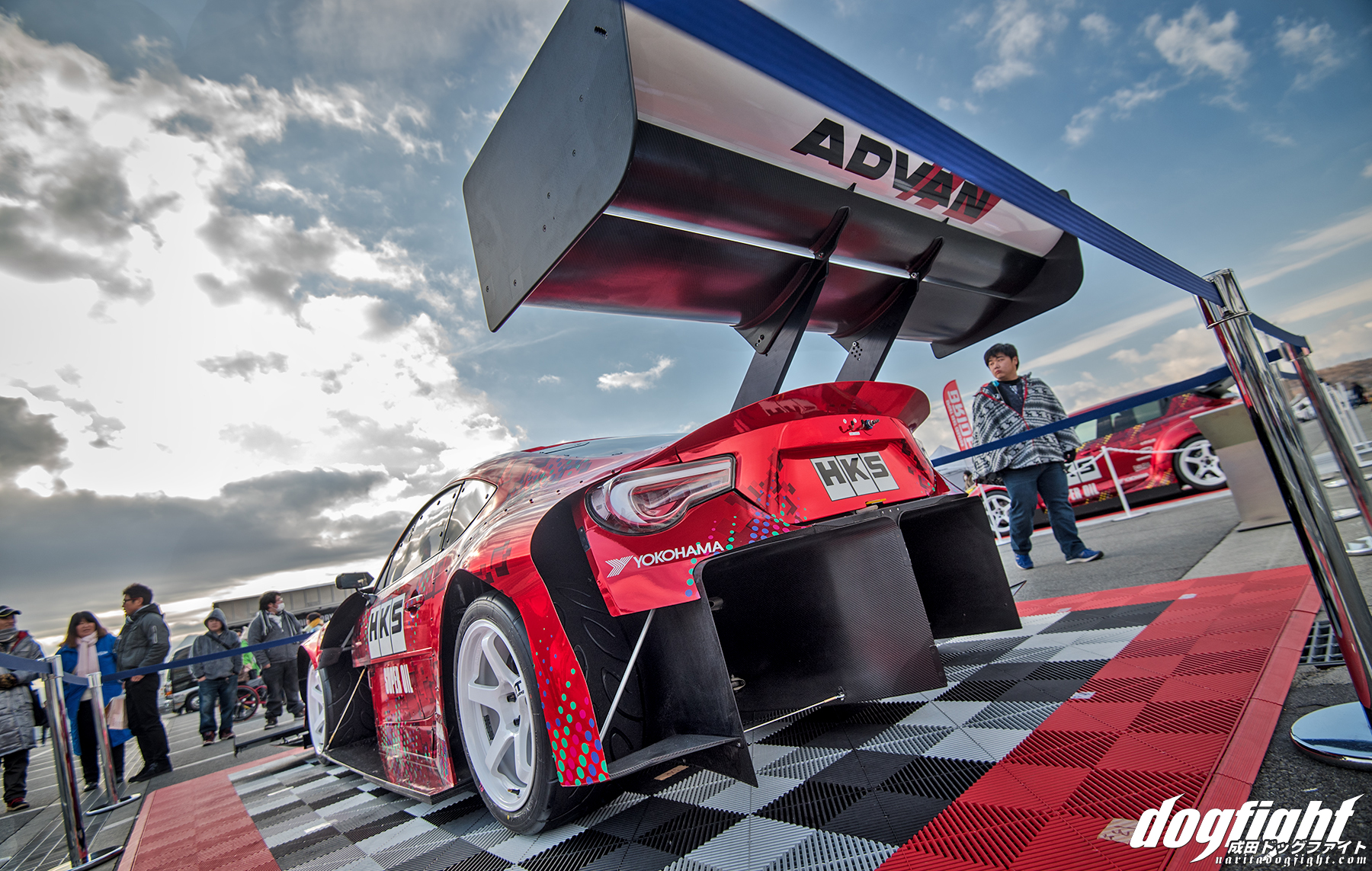 Next month will hold some very interesting events in the sport for sure.  I’d also be curious to see if HKS will consider this car for a WTAC bid in the future as well.  Whatever the case may be, it spells out more excitement in Japanese Time Attack – and that’s something I’m always game for.