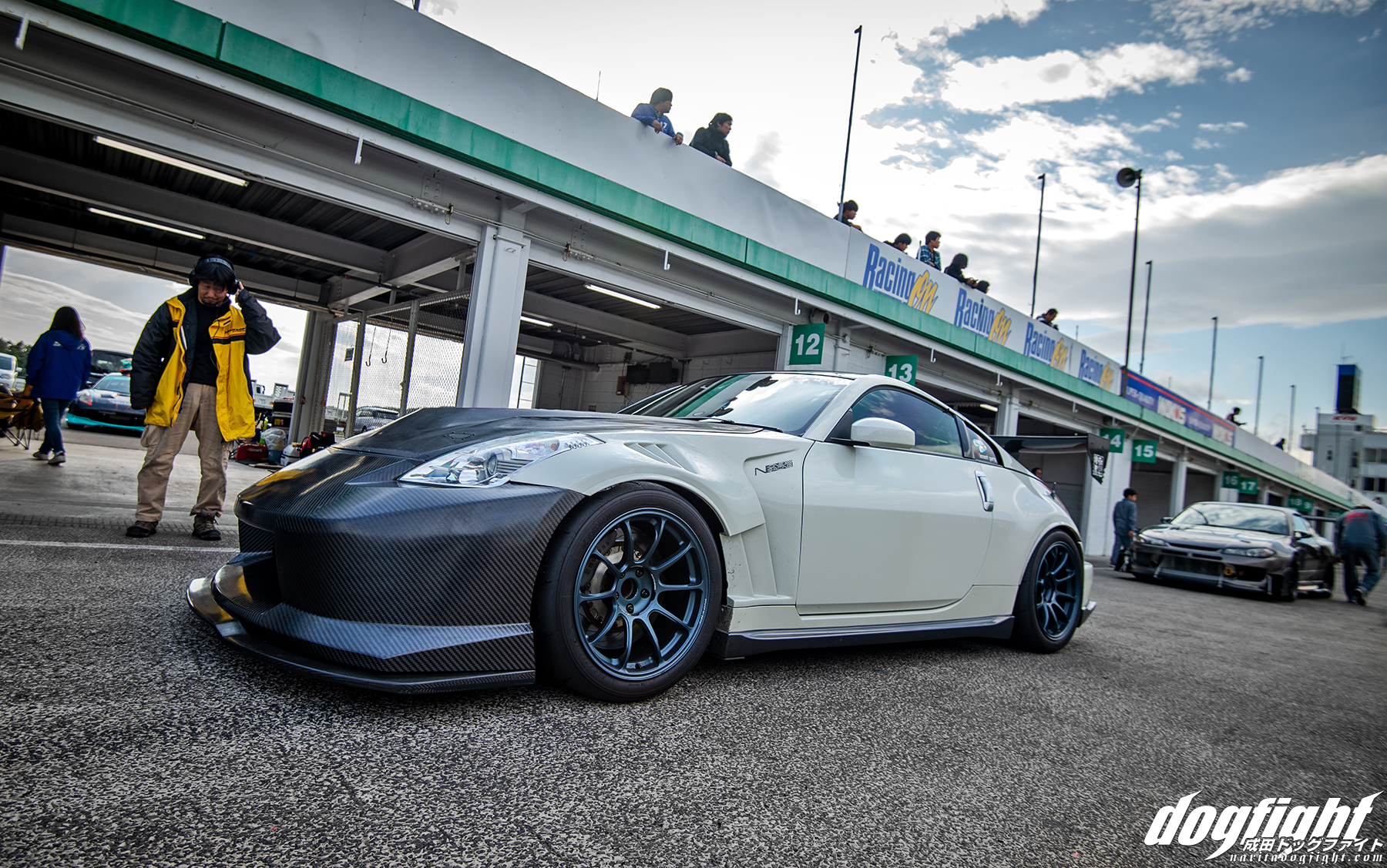 Every so often I like to check in on cars and drivers that we’ve spotlighted in the past to see how the development of their build is going.  Earlier this year I had the opportunity to talk to Tajima Hirotsugu about his Nismo 380RS, but that was months ago and he’s been busy over the off-season.

As I previously wrote in our original article about Tajima and his campaign with the 380RS, his intention to keep the car “comfortable enough on drives through the city, and would be competitive with the likes of Porsche GT3s and BMW M4’s on track…” still holds true today; despite some rather borderline race modifications.

Unveiling the new look at his first event of the new time attack season in Japan, the raw carbon front bumper and custom vented hood based off the MCR unit drew a lot of interested spectators to his garage.  Spending his Summer months in the workshop, the front bumper was completed just in time for the SUGO event with Tajima stating that he was so rushed he didn’t even have time to paint it.  Although truth be told, I actually like the unpainted look of the front end as it ties in with the carbon roof.  The rest of the car has remain unchanged aesthetically, with the exception of the paint matched fenders.  Tajima admits that he used this event as a way to acclimate himself back into driving, and to restore the feeling he gets when behind the wheel – and what a great place to do so at his favorite track. 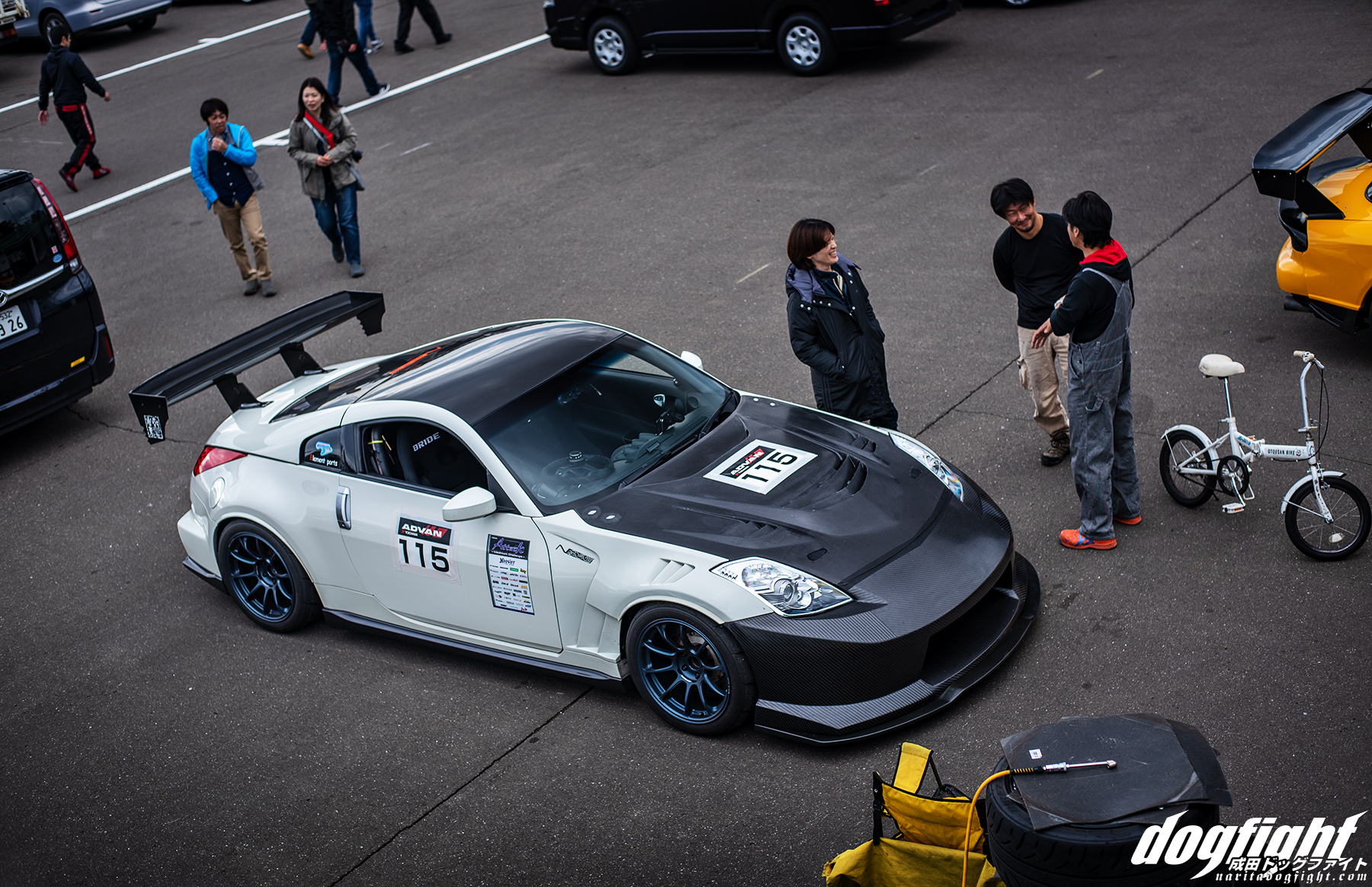 Craft Company’s Masaki chats away with the N-One Racing director in the pit area. 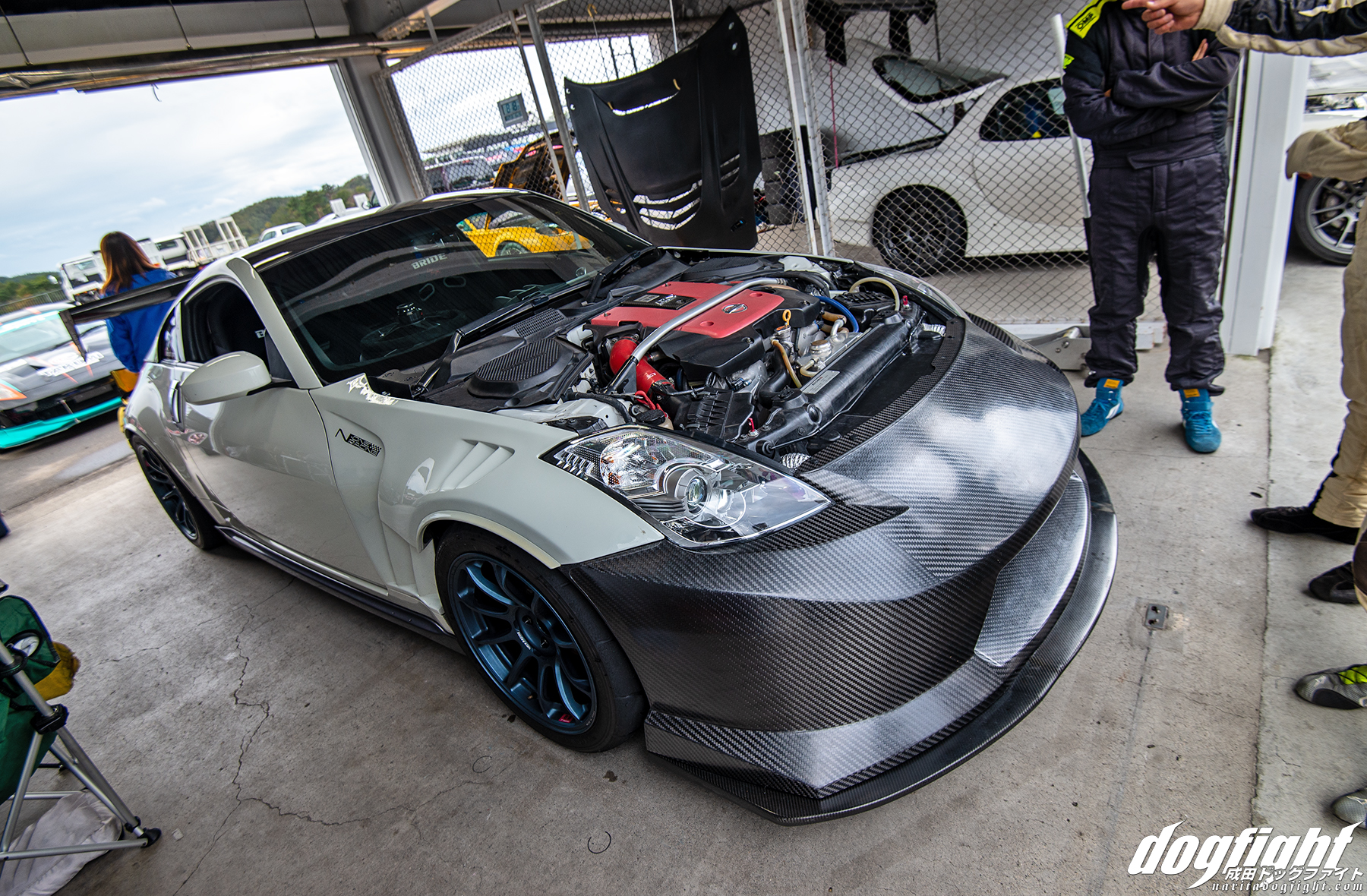 Having the Nismo tuned 380RS motor as a base means that you really don’t need to concentrate your efforts in modifying anything under the hood.  The 3.8 liter, naturally aspirate engine gives Tajima enough power, along with the added reliability of OEM, factory assembled components.  It all equates to a car he won’t have issues with driving to and from the circuit with. 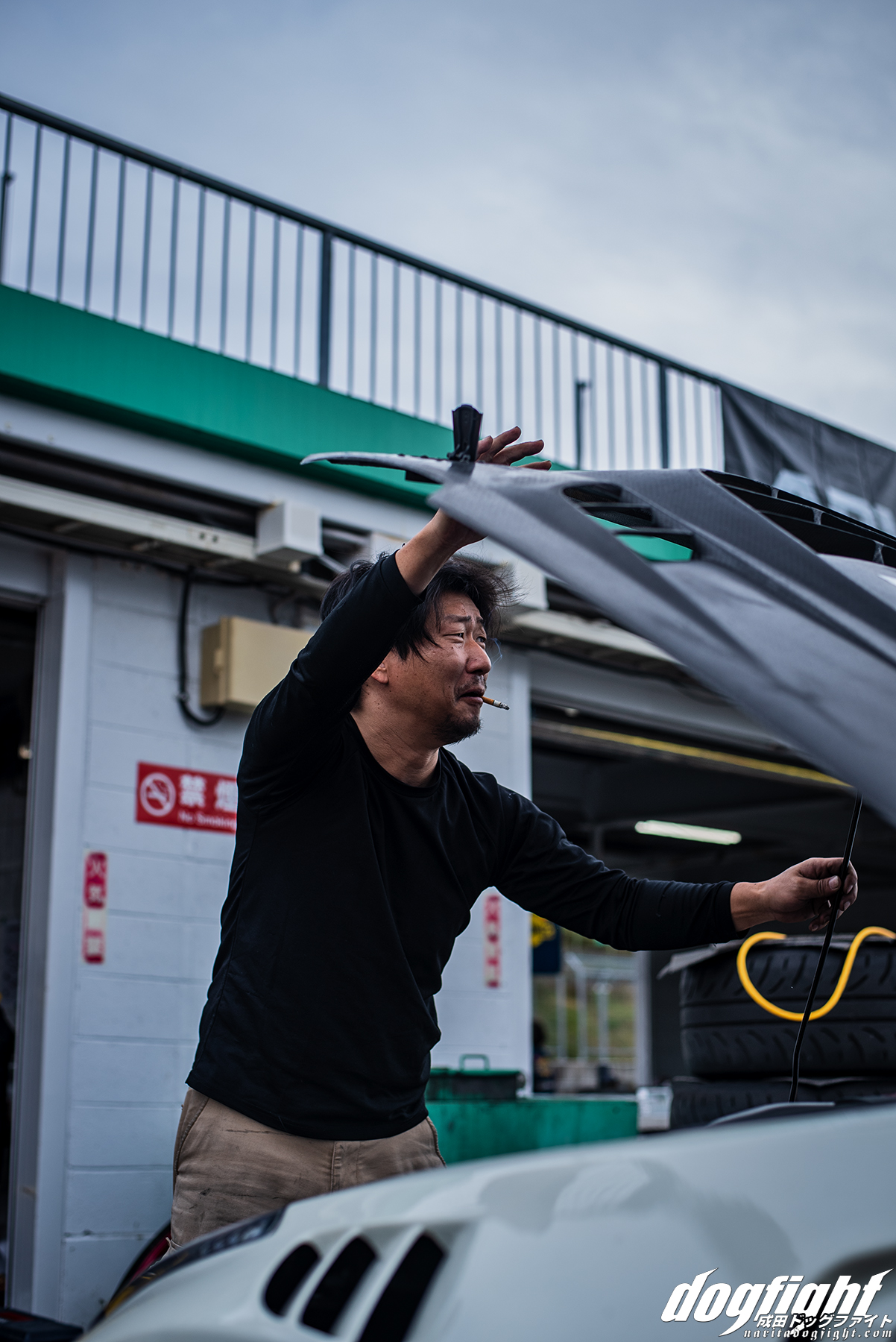 N-One Racing support was on hand during the event to assist. 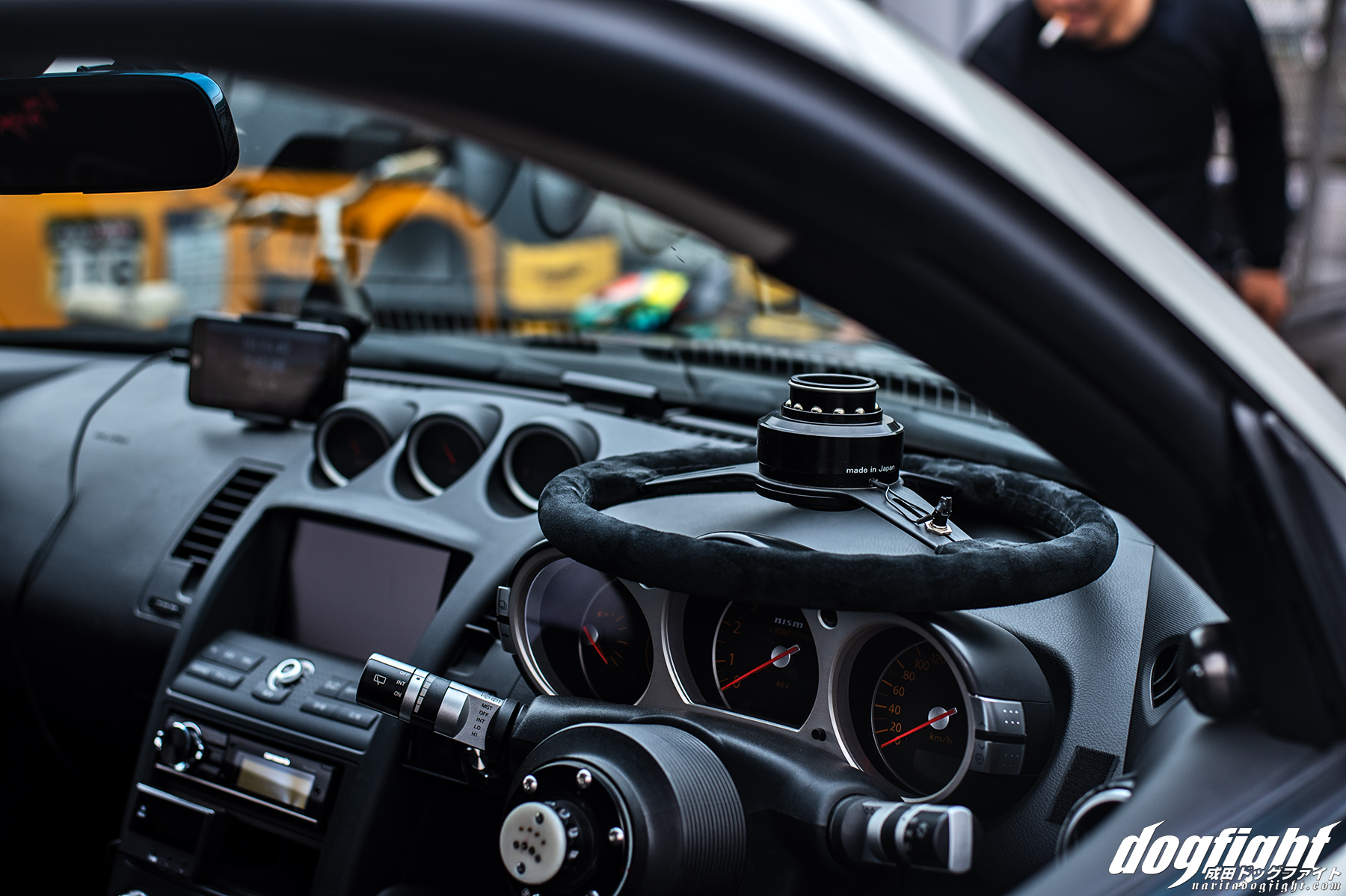 The interior remains the same with full interior and all the amenities of a street car. 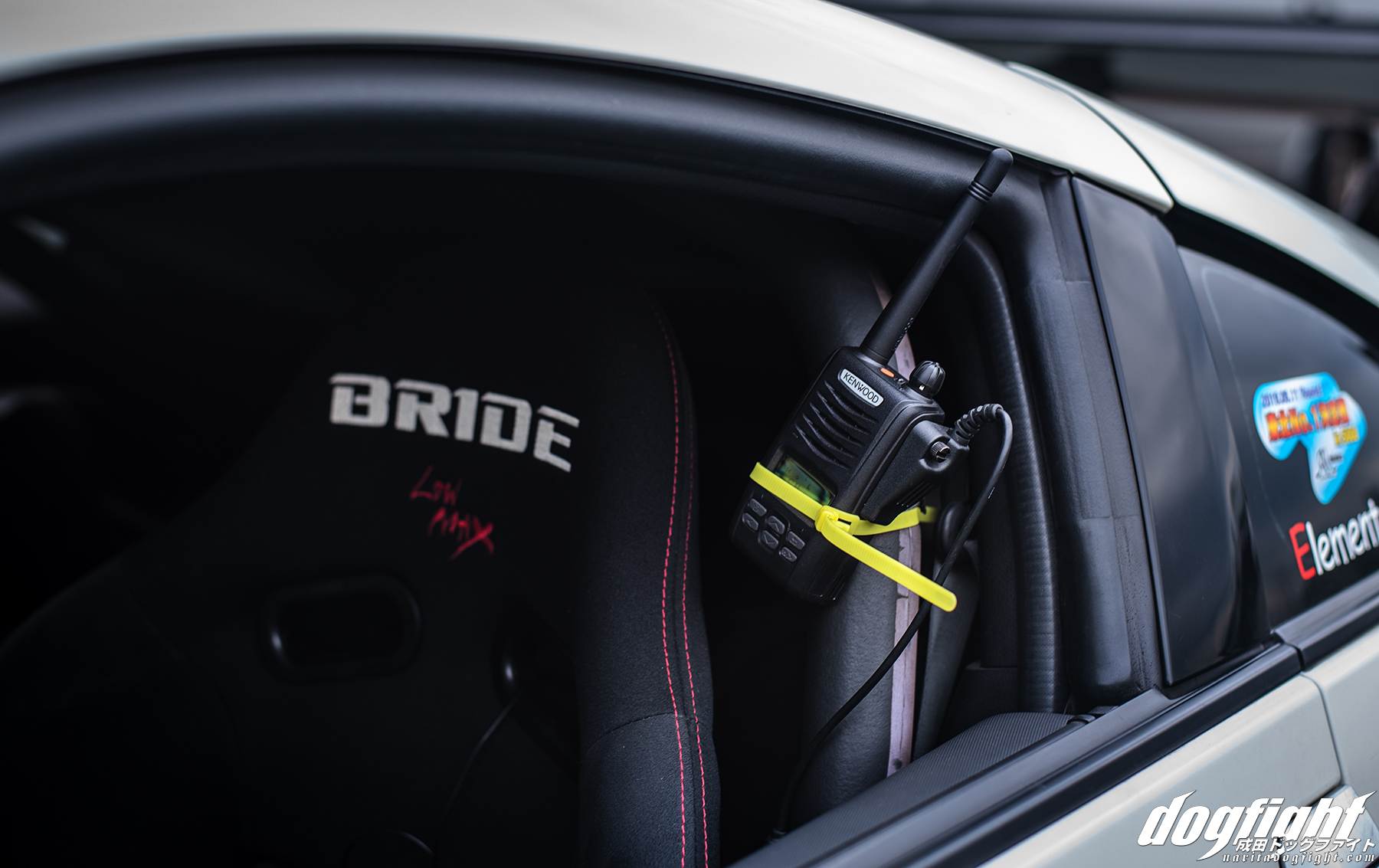 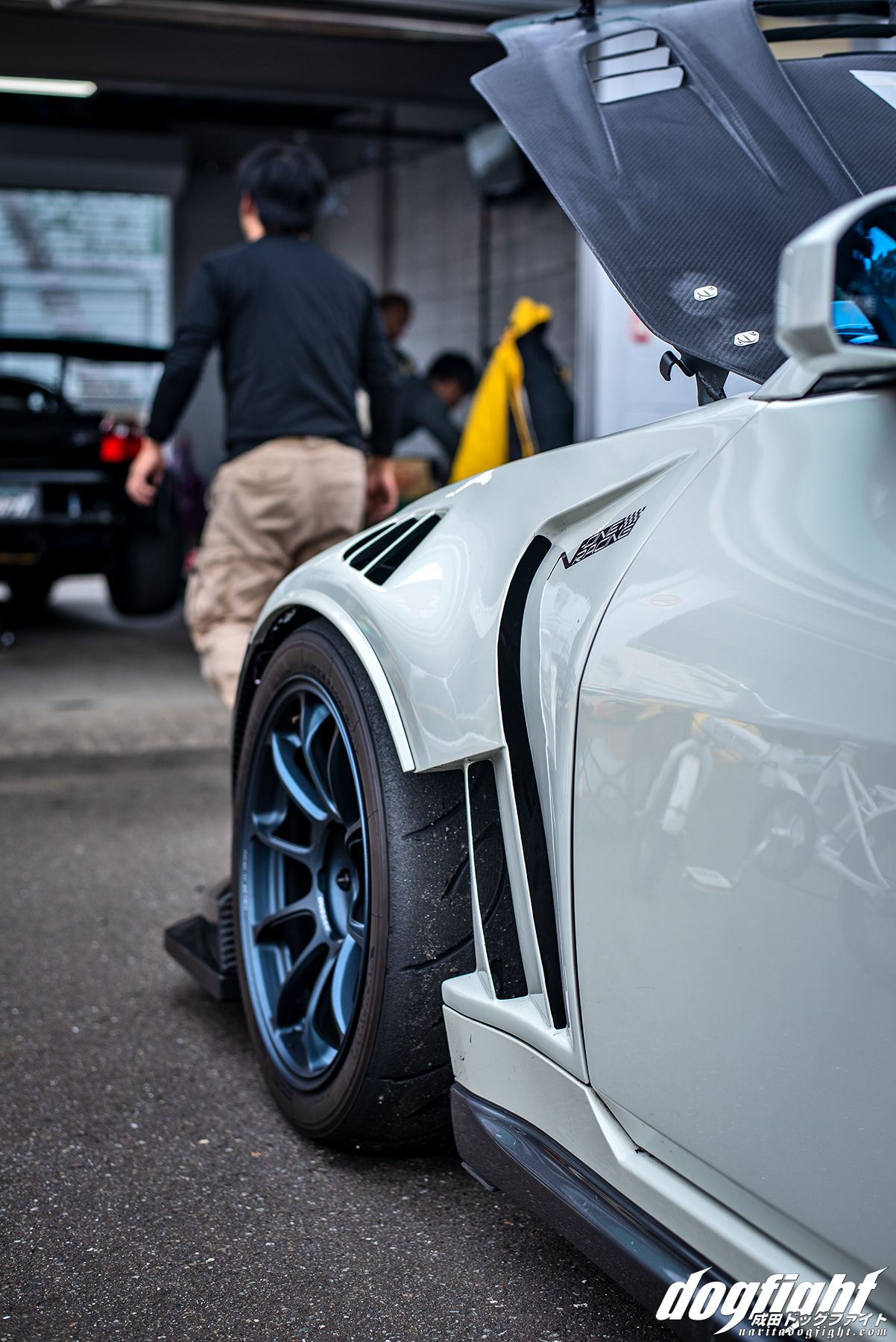 A closer look at the Sundome fenders. 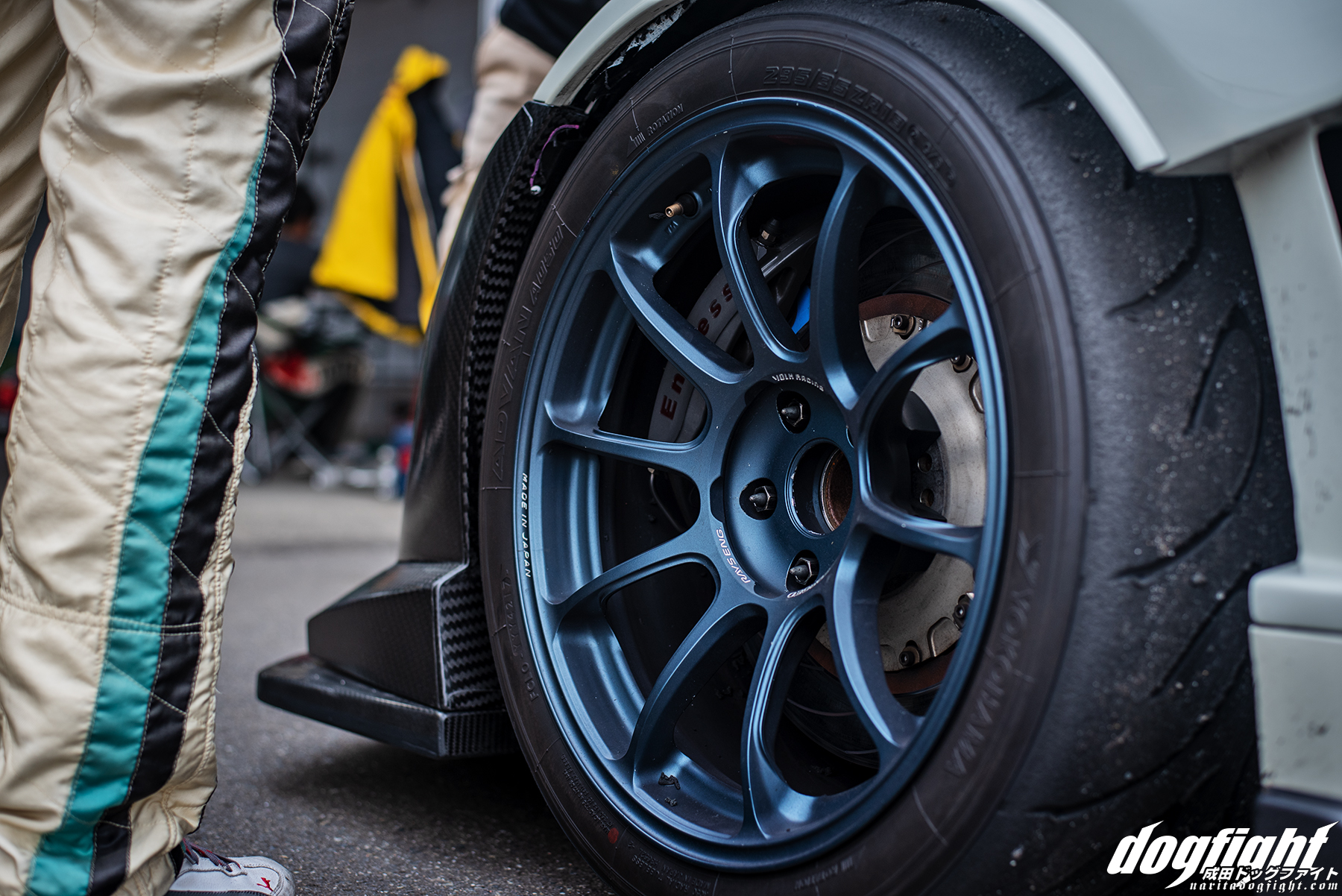 A change of pace with the new matte blue ZE40 wheels from Volk.  Side note, those legs standing next to the wheel belong to Toshio Kumakuro, owner of Techno Pro Spirits.  They were running their shop MRS; more on that later… 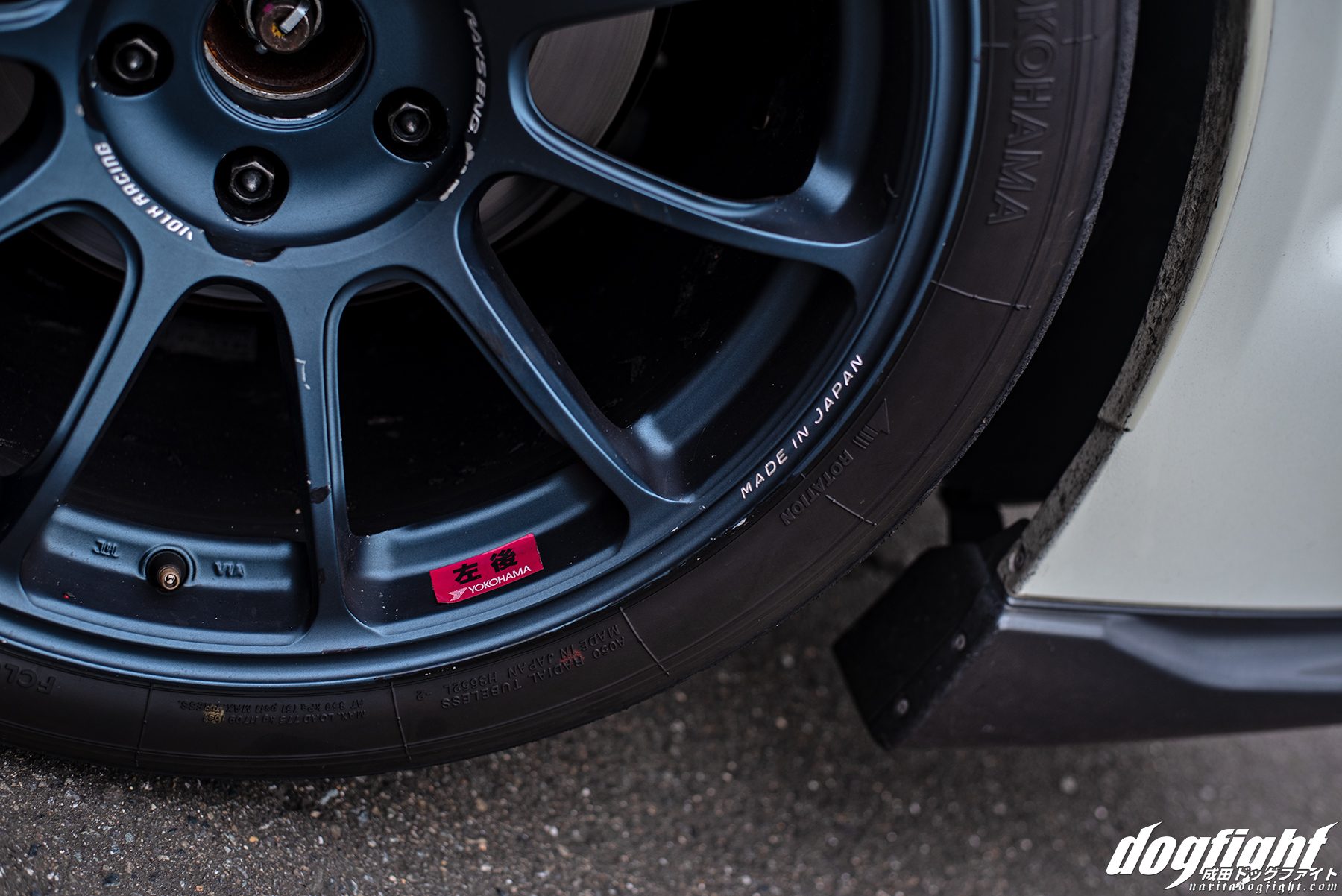 I’ve always thought this to be a beautiful color against a pearl white car.  The color is different, but Tajima retains the same wheel and tire sizing – using a 295/35/18 Advan A050. 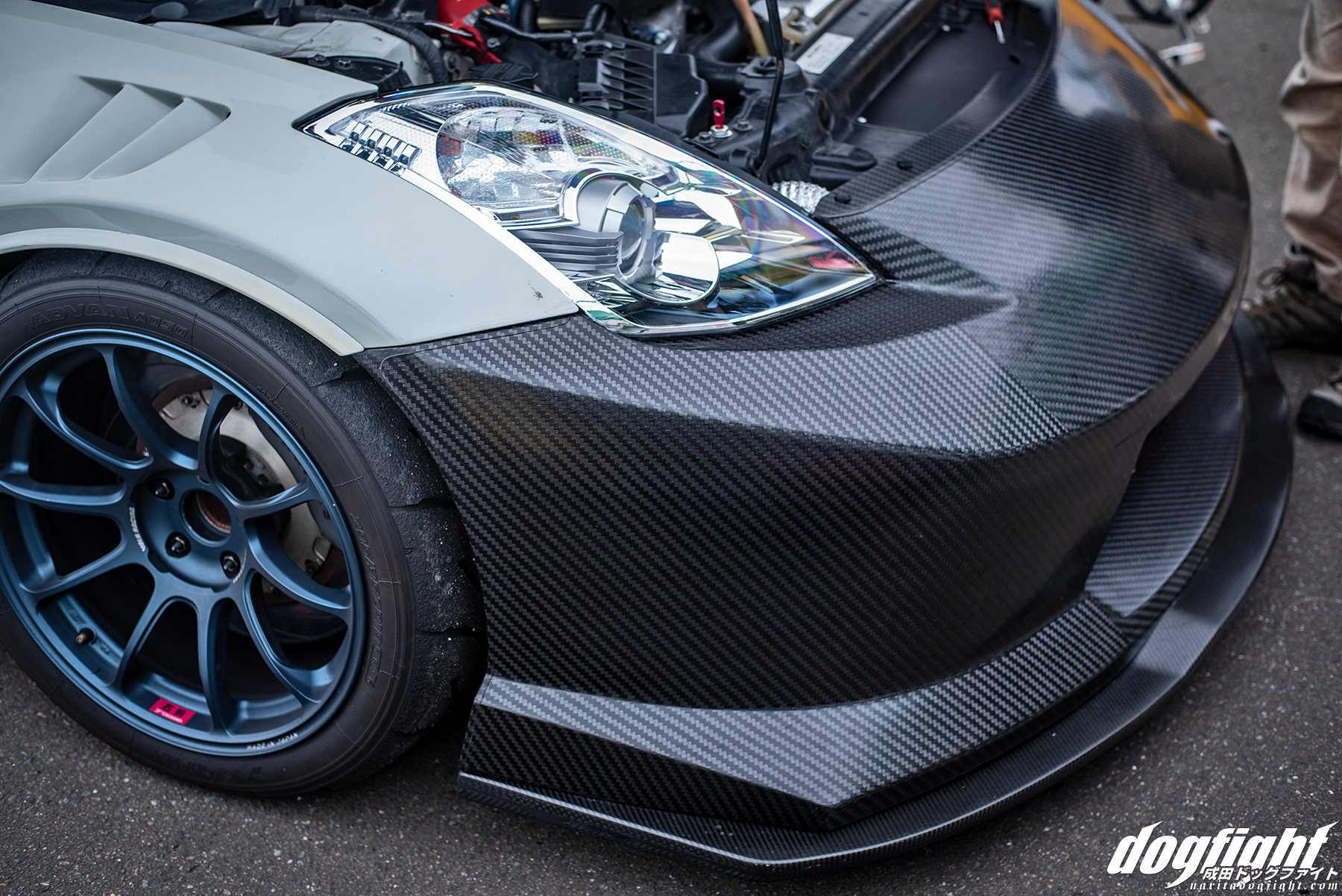 Really nice looking carbon weave; although I have no doubt it will look great paint matched as well, I do enjoy this look. 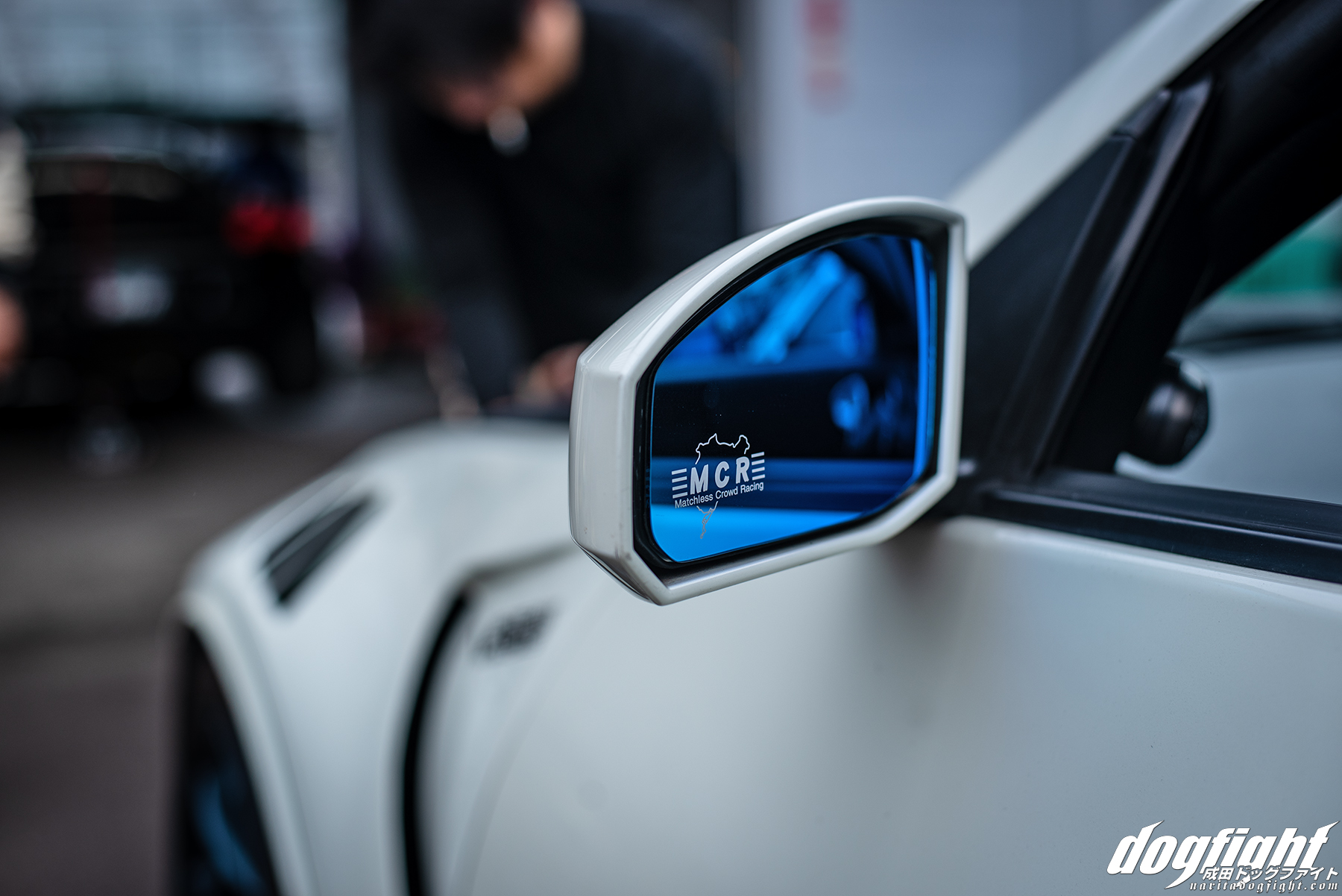 OE mirrors remain but have been supplemented with MCR glass. 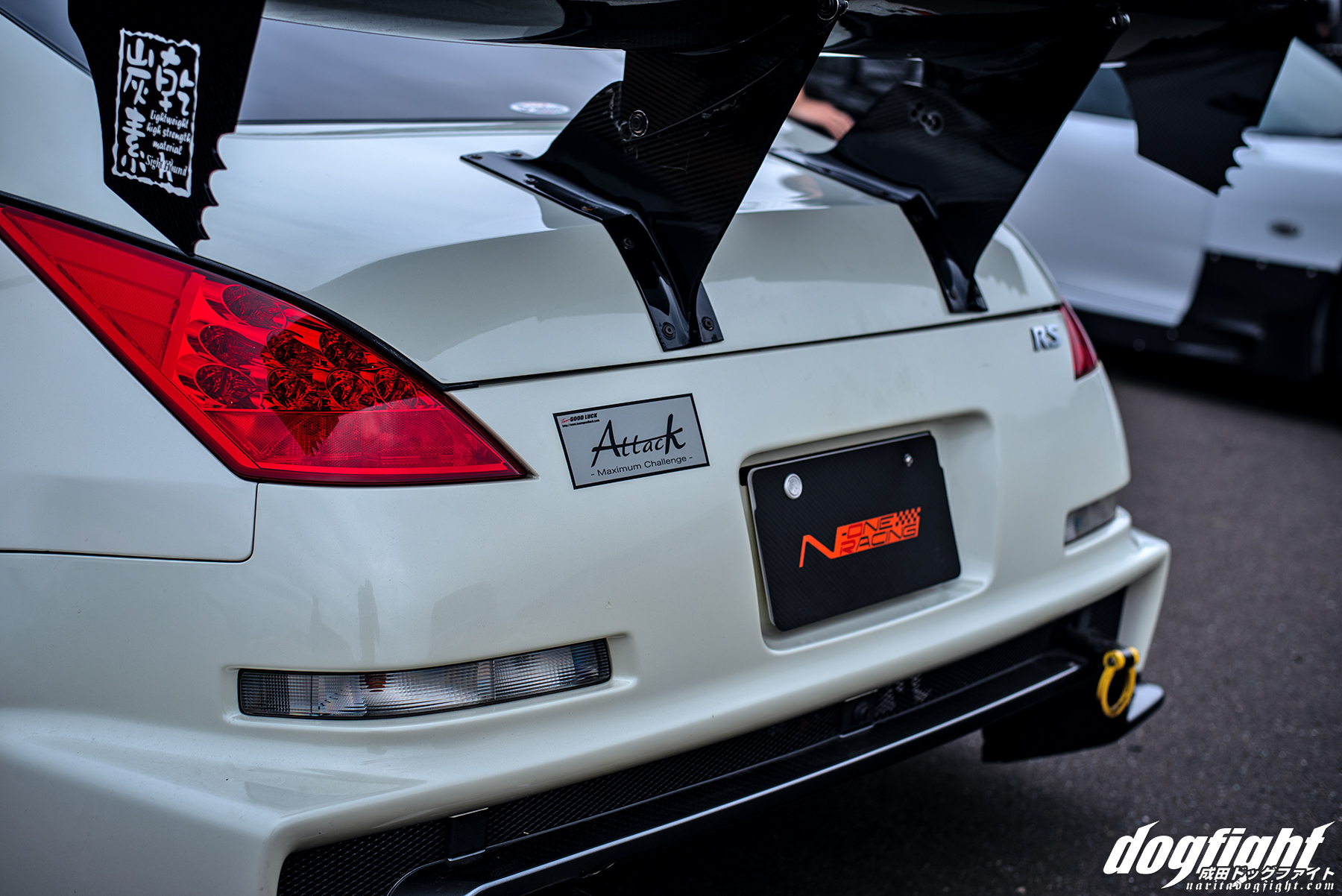 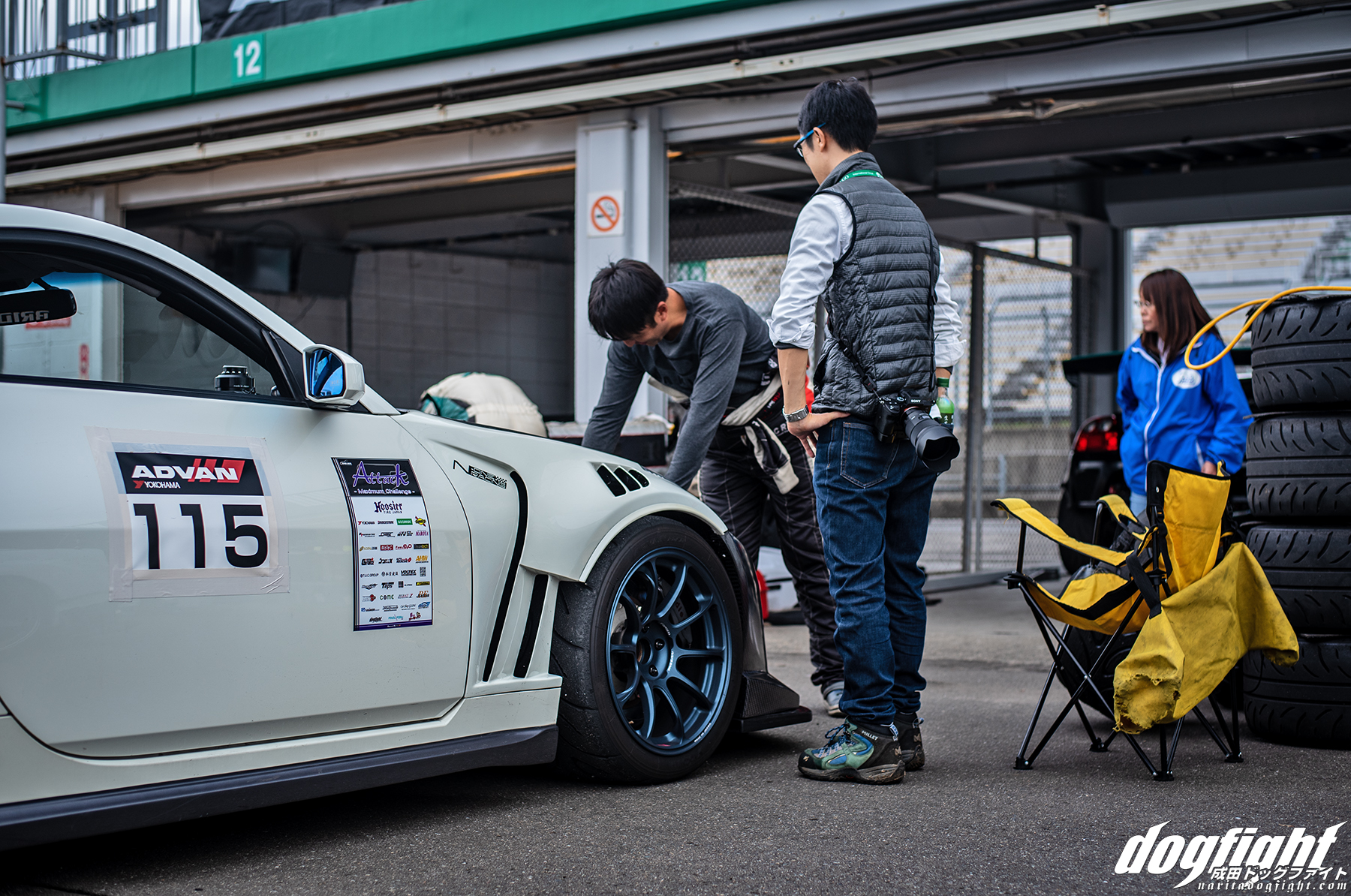 Tajima and Haji chatting about the day’s first run. 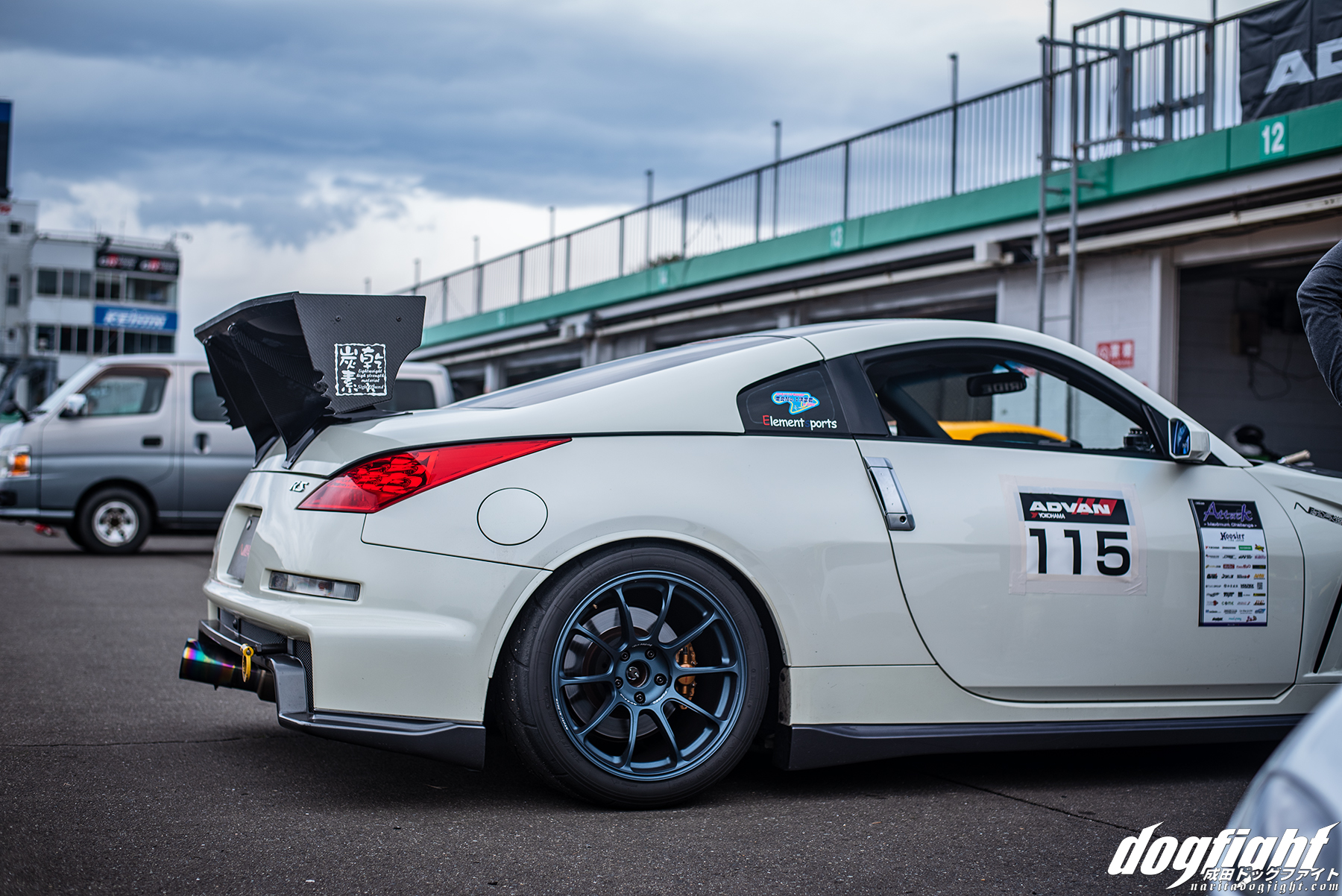 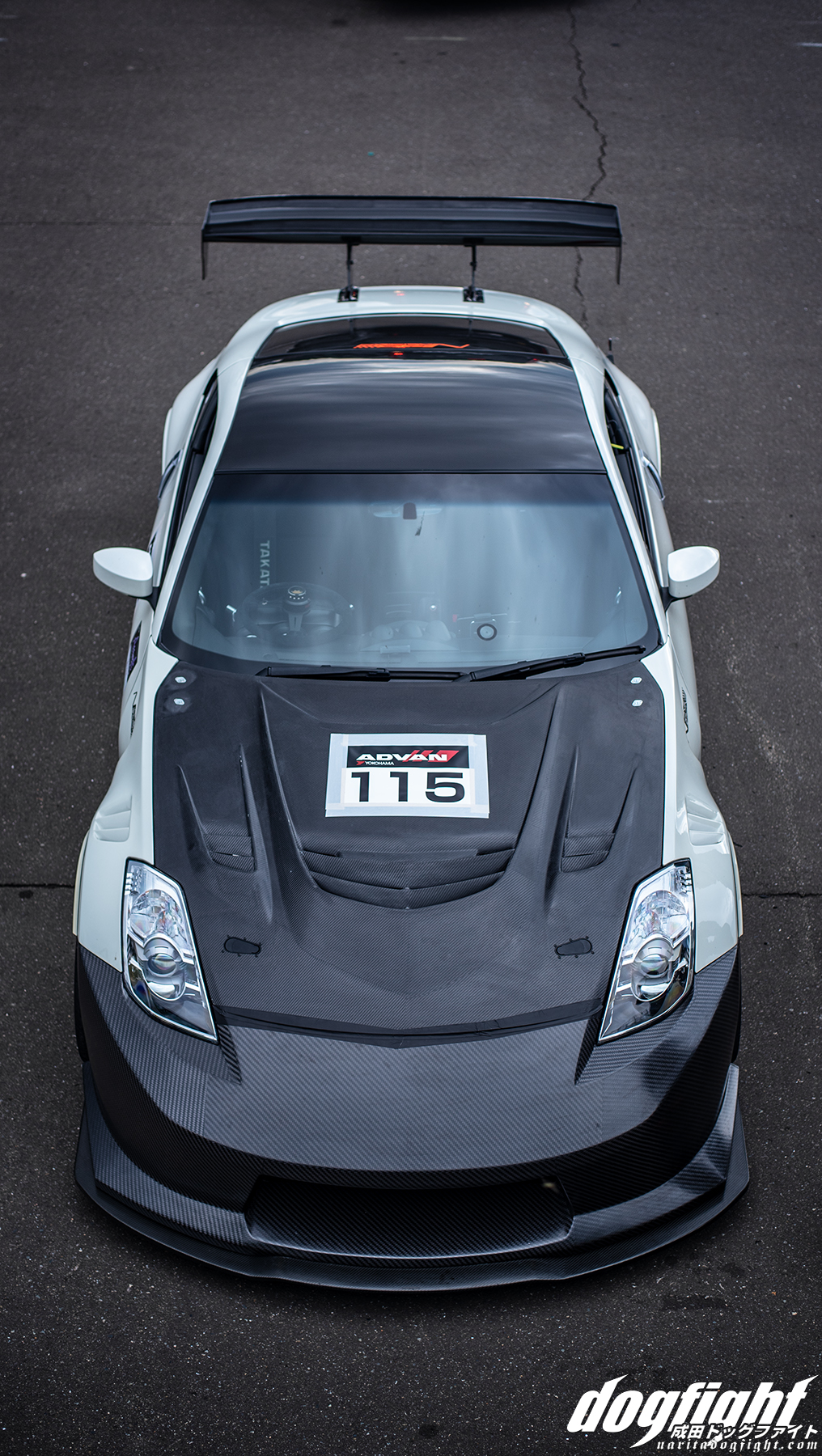 Good look of how they secured the new hood in place – flush aerocatch up front, and 2 quick release fasteners on either side of the back.  Tajima has no plans on selling the hood, as it is based off the MCR one; it is for his personal car only.

Lined up to head out during the second session. 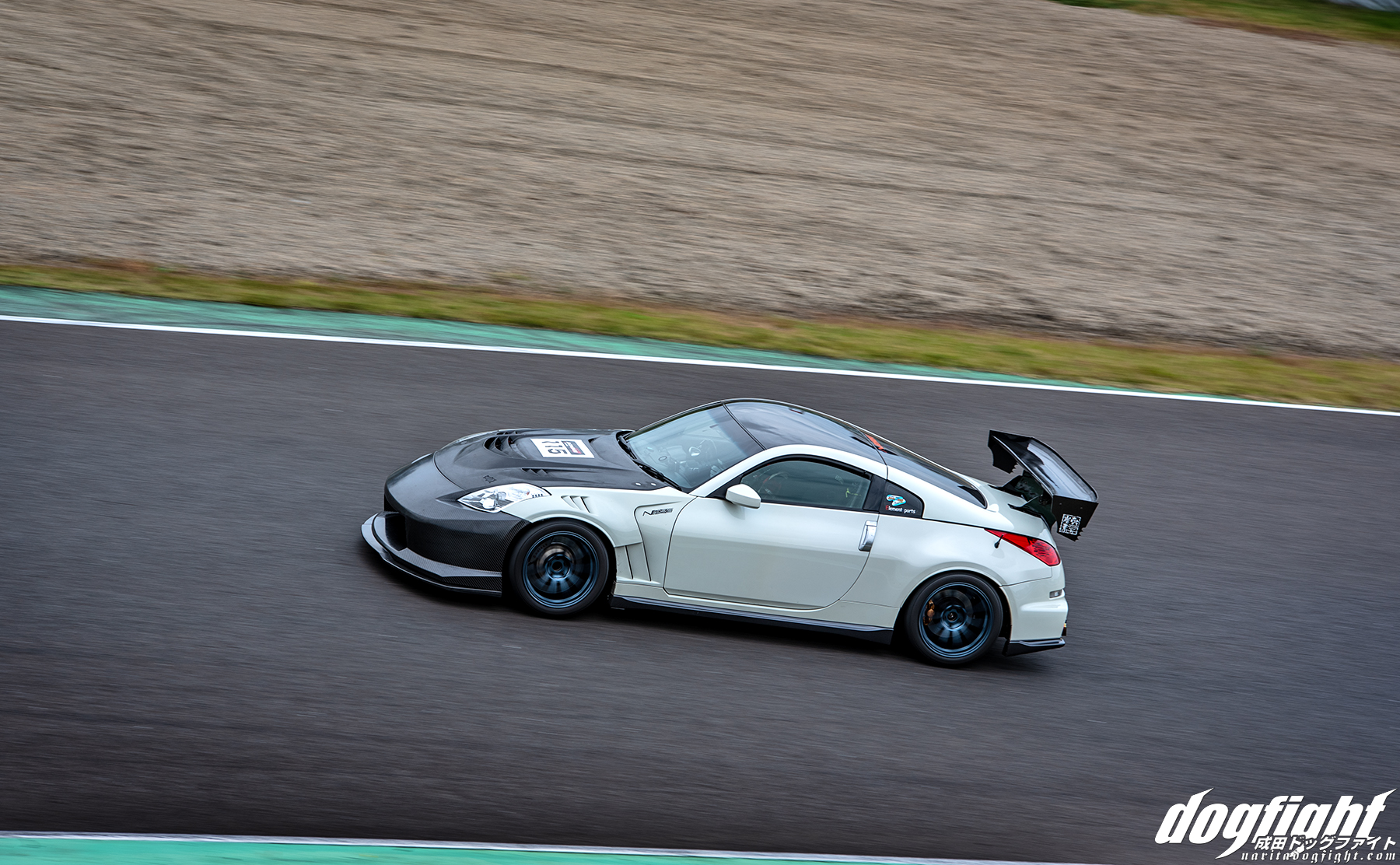 Heading out of turn 1, after a short straight there’s a somewhat wide left turn that heads into the S section of SUGO.  From the inside of the track its interesting to see each of the cars take that left an see how much the cars pitch.  The cars with heavy aero hardly move, but more mildly built cars like this one have a decent amount of body roll – see exhibit A: 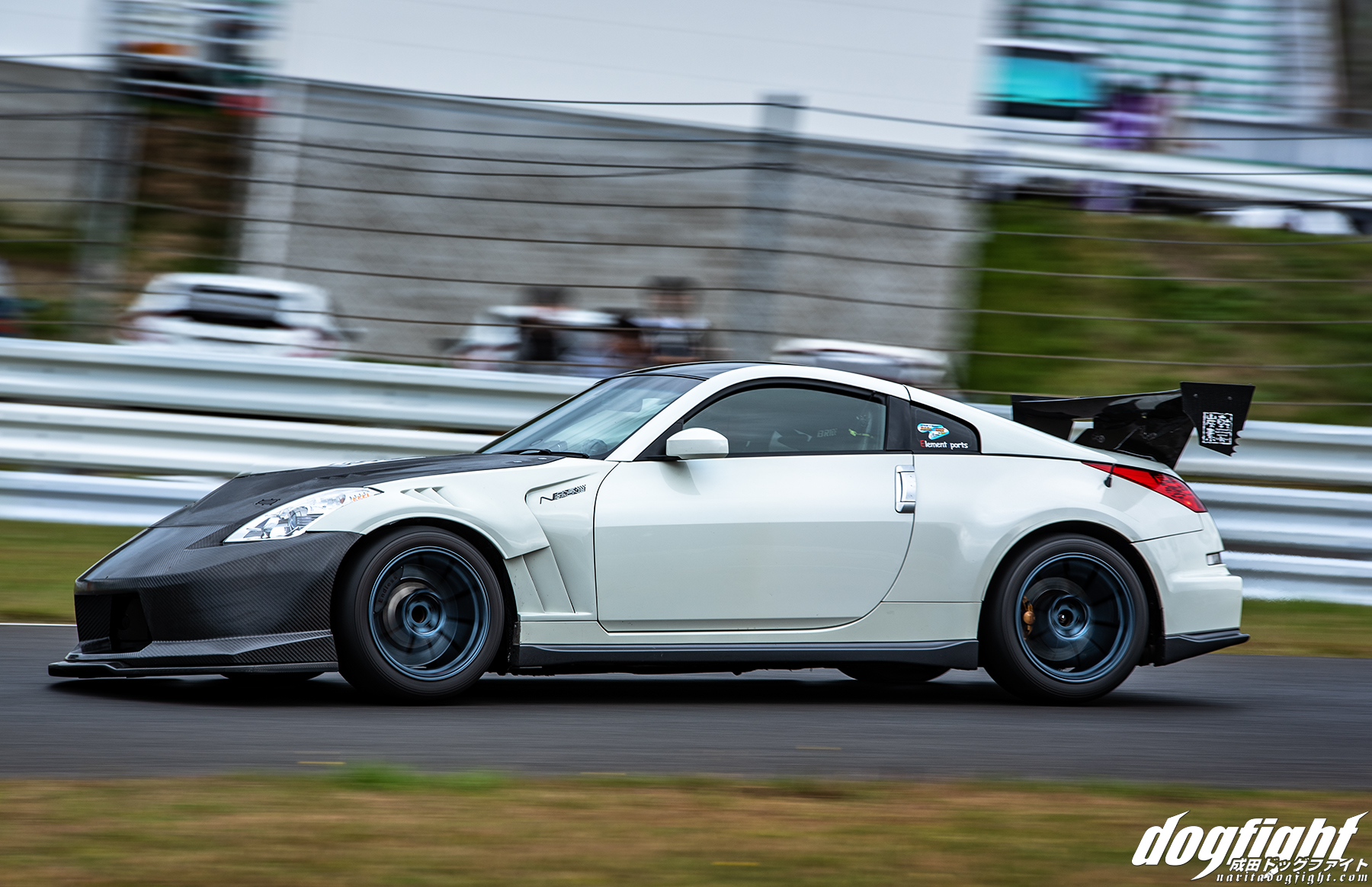 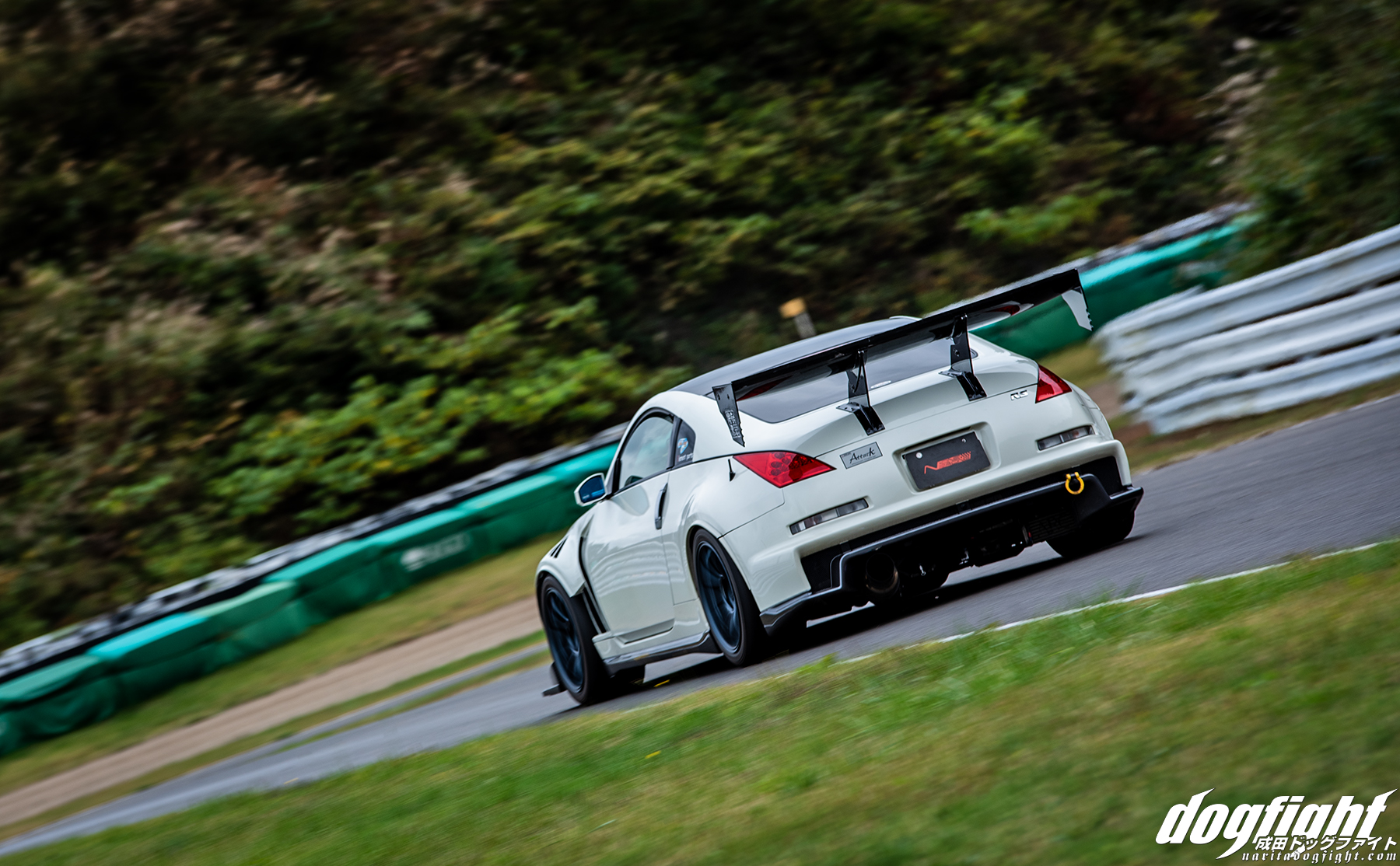 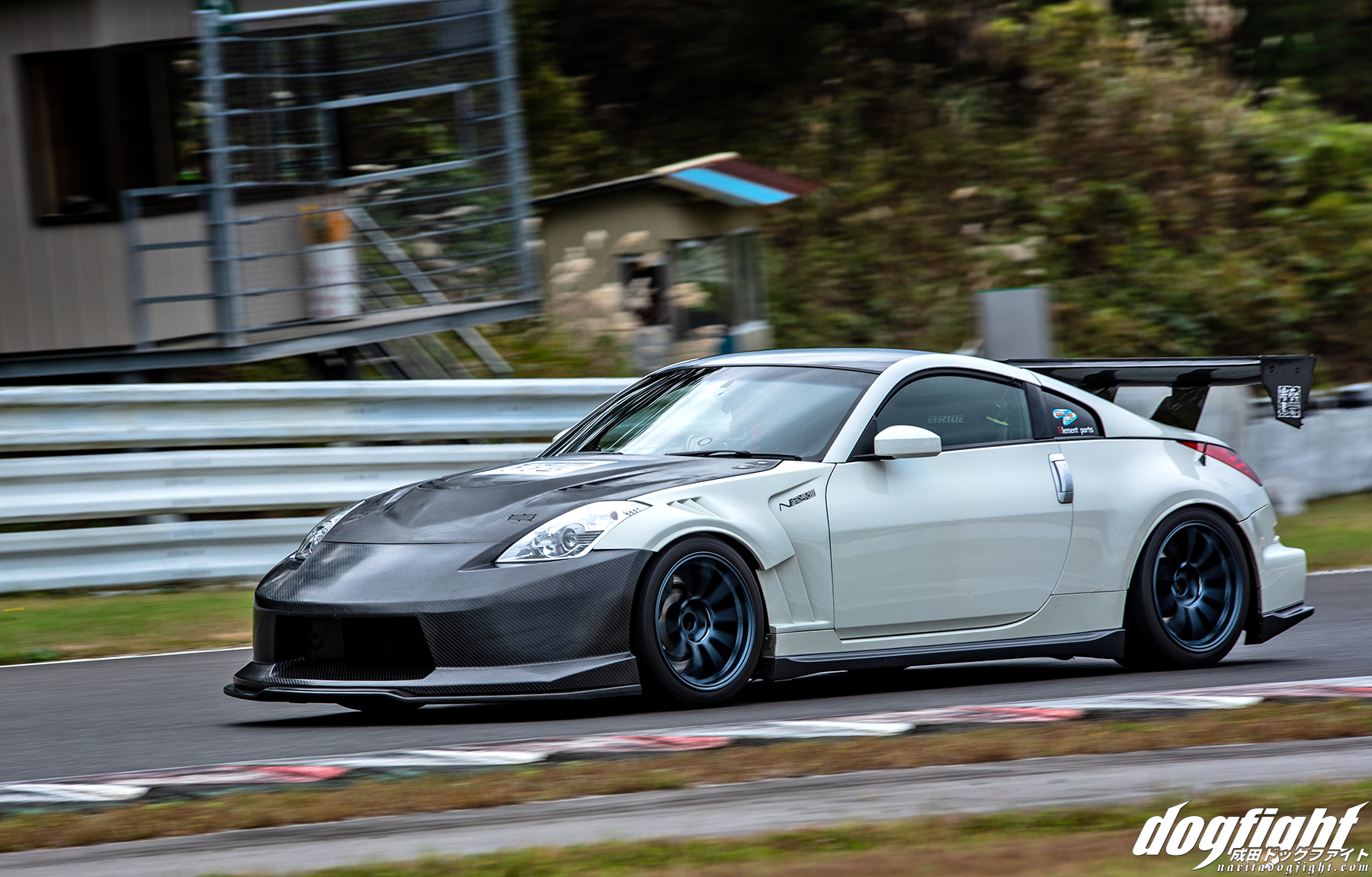 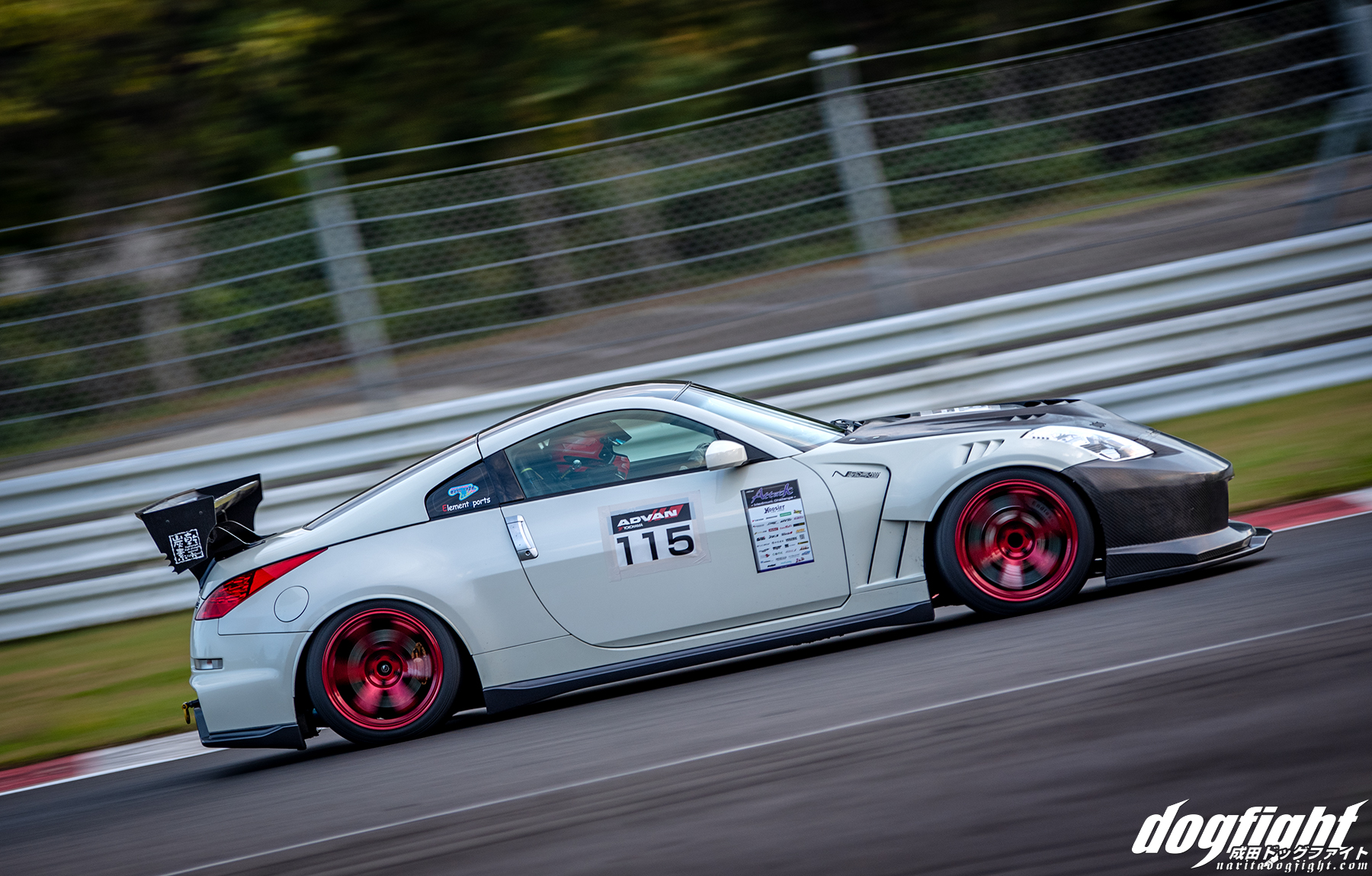 Quick wheel/tire change for the last Superlap session of the day.

Over the past couple weeks we’ve been getting a lot of inquires about posting more of Tajima’s N-One built 380RS.  There is a large Z community worldwide, but unfortunately not many enthusiasts tend to build these specific to time attack; and definitely not to this degree aesthetically.  I think that’s one of the reasons that the N-One Racing Z33 is so sought after.  At any rate, I hope this satisfies the masses for awhile!  Looking forward to seeing more progression through the season.