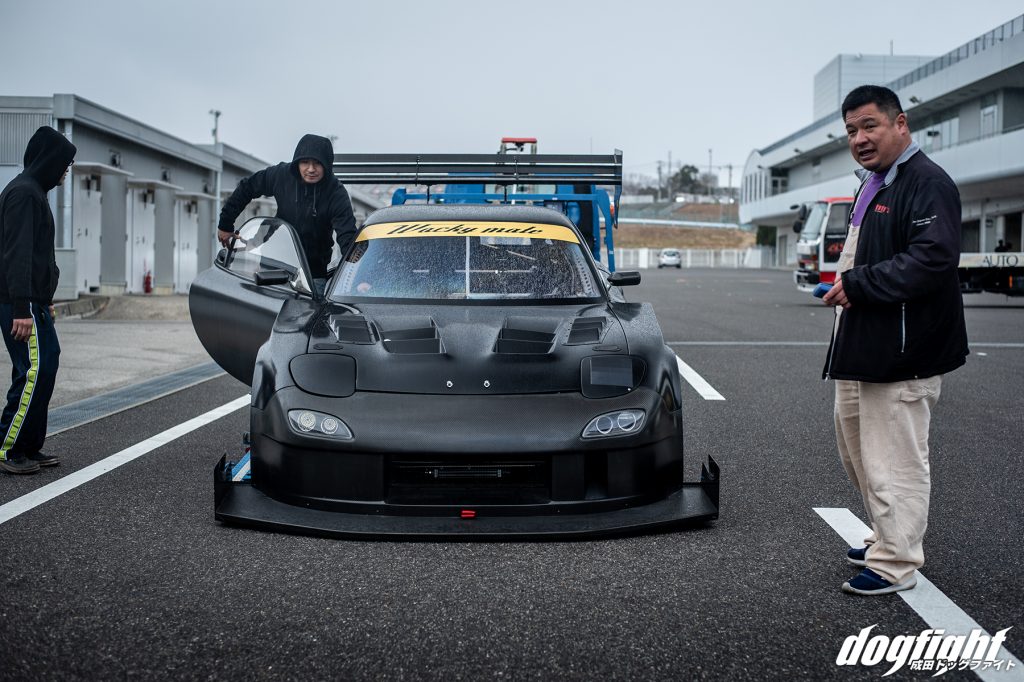 It’s always exciting to see new builds get unveiled each year.  It shows progression of the sport; both in the growth of drivers and the need to increase the performance of their cars.  In the case of Kengo ‘Lock’ Suzuki, it was an interesting combination of both that led to what you see here.

Back in 2014, Kengo Suzuki, purchased a Noble White Mazda FD3S with a very achievable goal in mind; he wanted to build a good looking car that could easily run sub-minute lap times at Tsukuba’s TC2000.  At the time, it was a very common goal amidst time attack drivers.  Chasing that coveted 59 second lap time without a heavily modified engine was a notable goal, even to today’s standards.  It didn’t take long for Kengo to achieve his goal, and about a year later he was able to hit at 58.2 second lap – even faster than he had originally calculated (it’s almost like skill behind the wheel is hereditary in this family).  It wasn’t long after that 58 second lap though, at the start of 2015, that the rotary in the FD finally gave out, and Kengo experience his engine blow on track.  It was an incident that had timed itself in a way with Kengo’s life that essentially ended up retiring the car for some time.

So for the next few years, 2016 through 2018, Kengo took a short hiatus from driving.  This short break allowed him to save up enough funds to dedicate to rebuilding the rotary engine, as well as take the purpose of his driving in a totally different direction; this time with his sights set on Suzuka.

Towards the end of 2018, Kengo approached the Aichi based shop, Wacky Mate, about supporting the new build.  The concept, once again, would be to achieve the fastest possible times utilizing a stock motor.  However, this time  he would be taking advantage of Wacky Mate’s ability to properly build the chassis and maintain mechanical reliability, as well as capitalize on his brother’s experiencing in making aerodynamic parts.  It didn’t take long for the shop to execute the vision and about a year later the once very white FD had been transformed into the matte black, precision build we see here today. 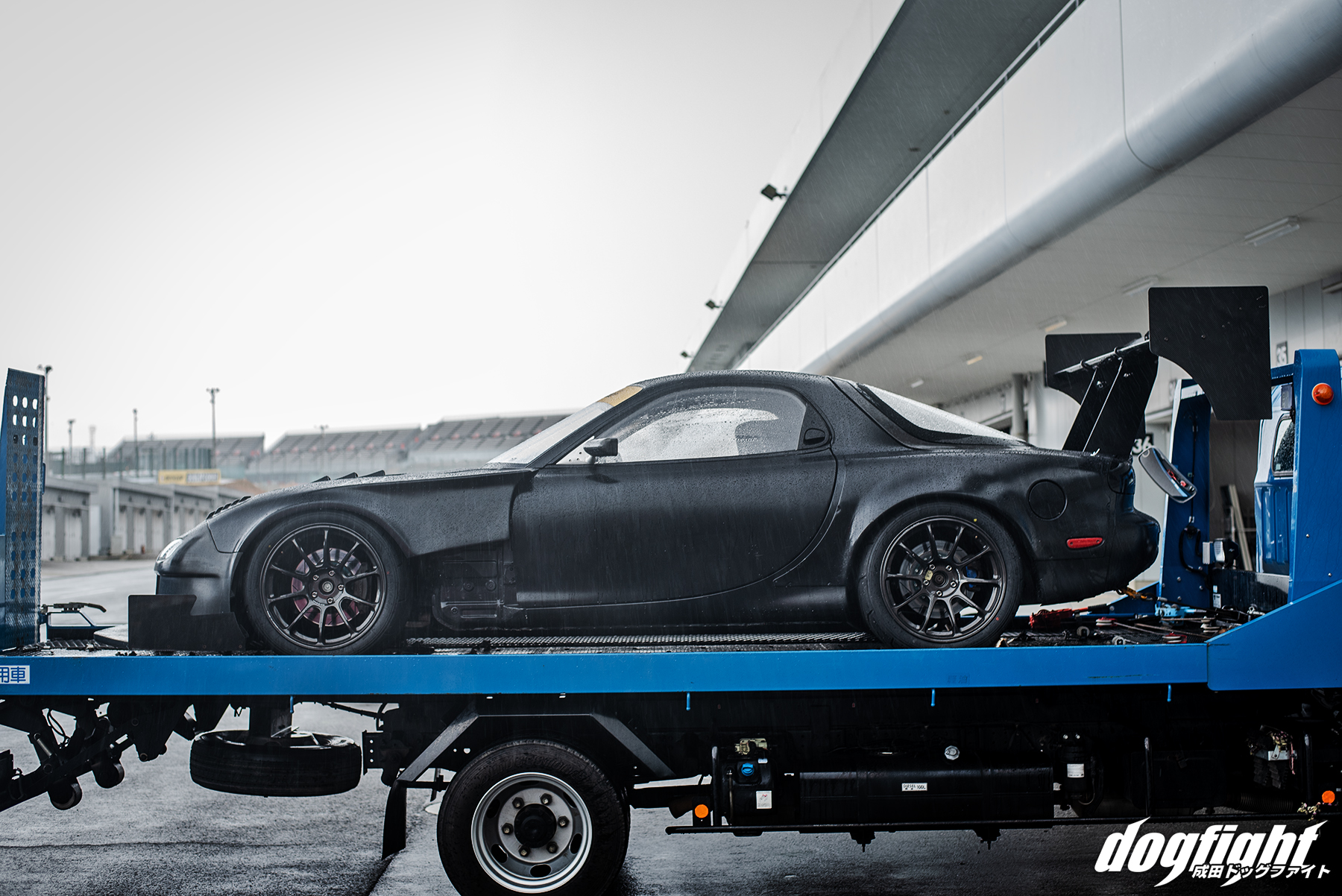 With Under Suzuki on board for the project, the FD’s aerodynamic package has come a long way since 2014.  Under spec front bumper, under panel and rear wing make up the most prominent pieces of the car’s new exterior. 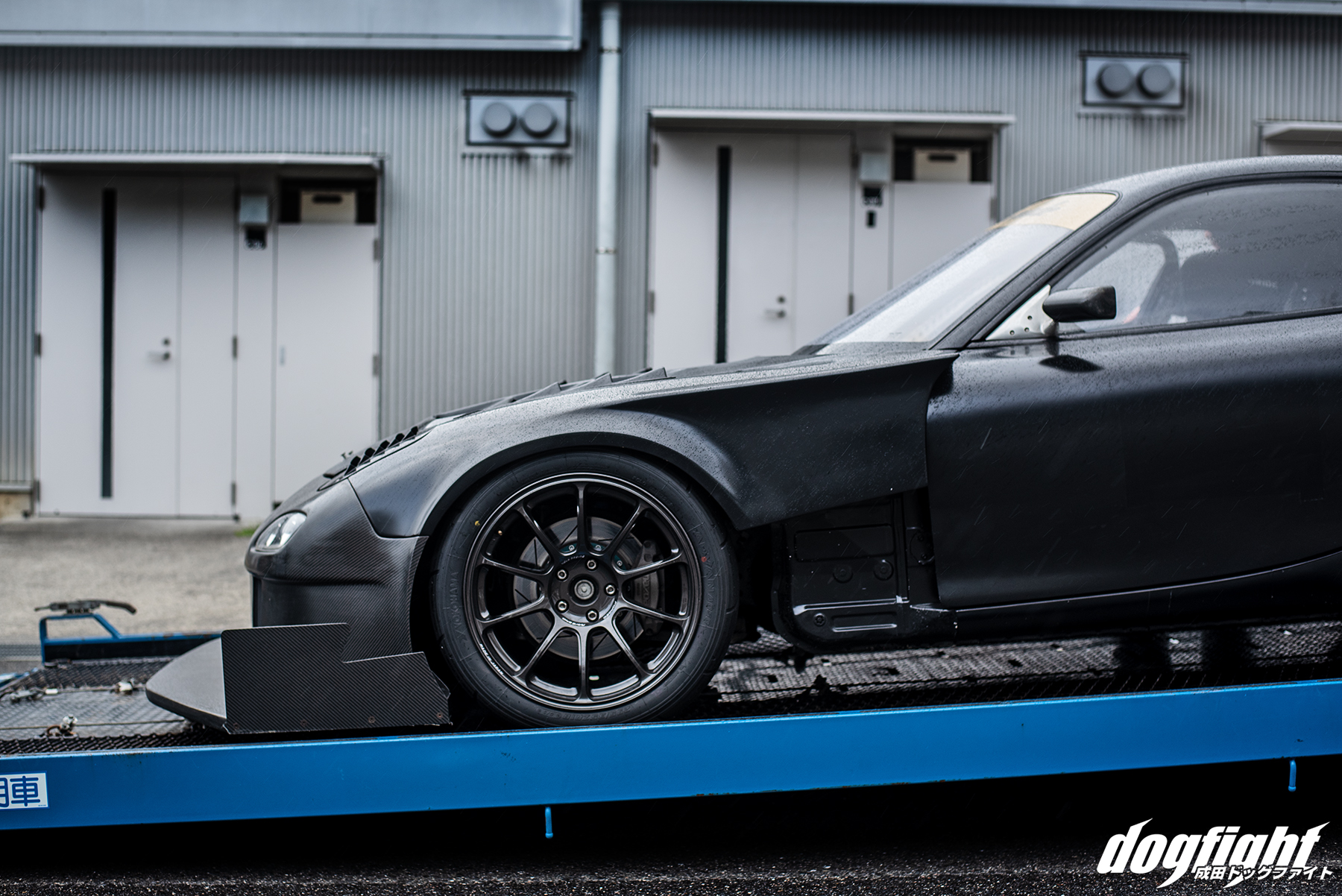 Modified TCP Magic front fenders allow the 295/35/18 Advan A050’s plenty of real estate up front.  A vented hood with additional RGN side vents and a set of carbon Craft Square mirrors rounds out pretty much the entire extent of the exterior modifications.  For now, it seems like Kengo is out to prove to everyone that less truly is more. 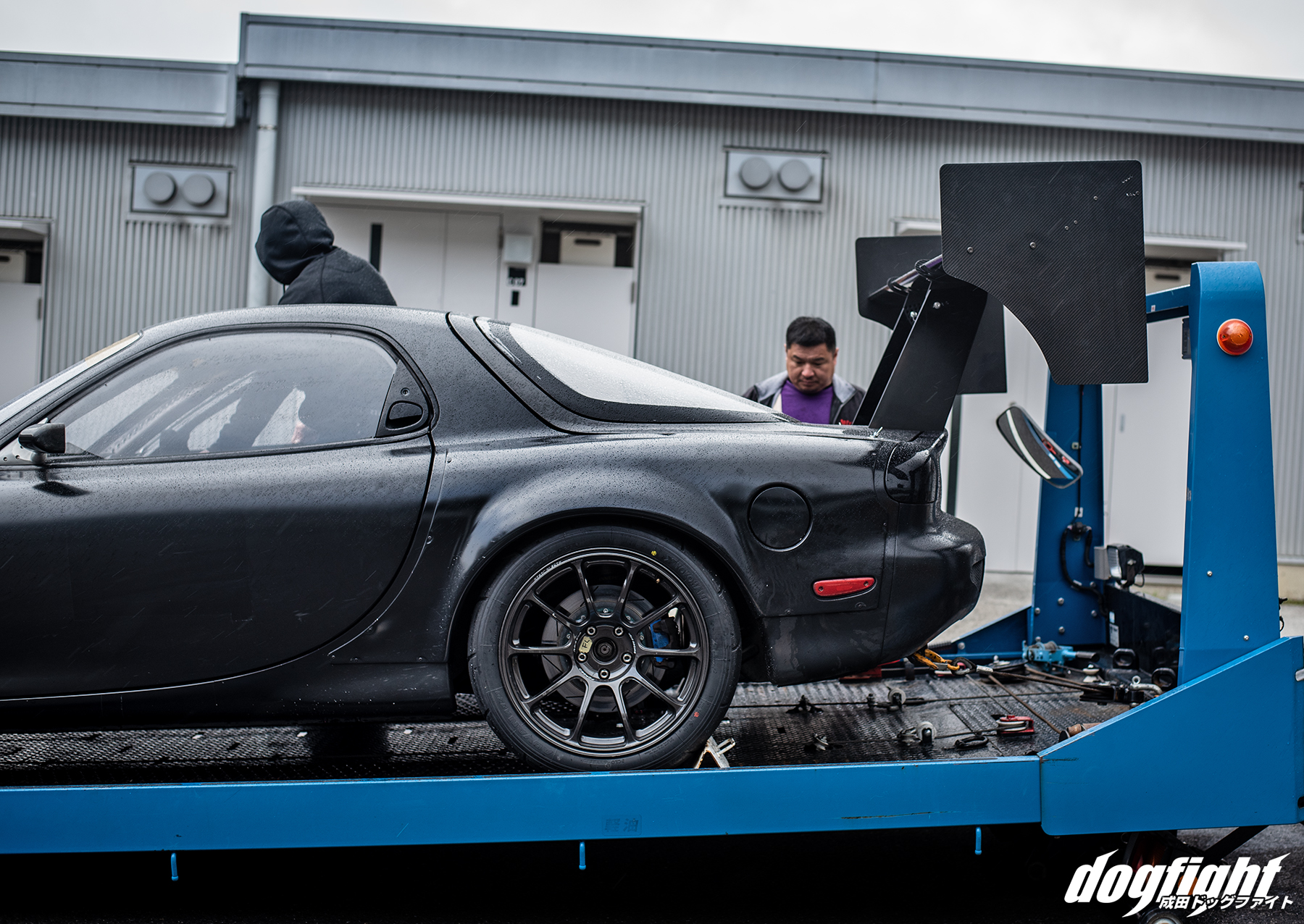 The Under Suzuki carbon wing element – overwhelming, but a proven contender in rear aero. 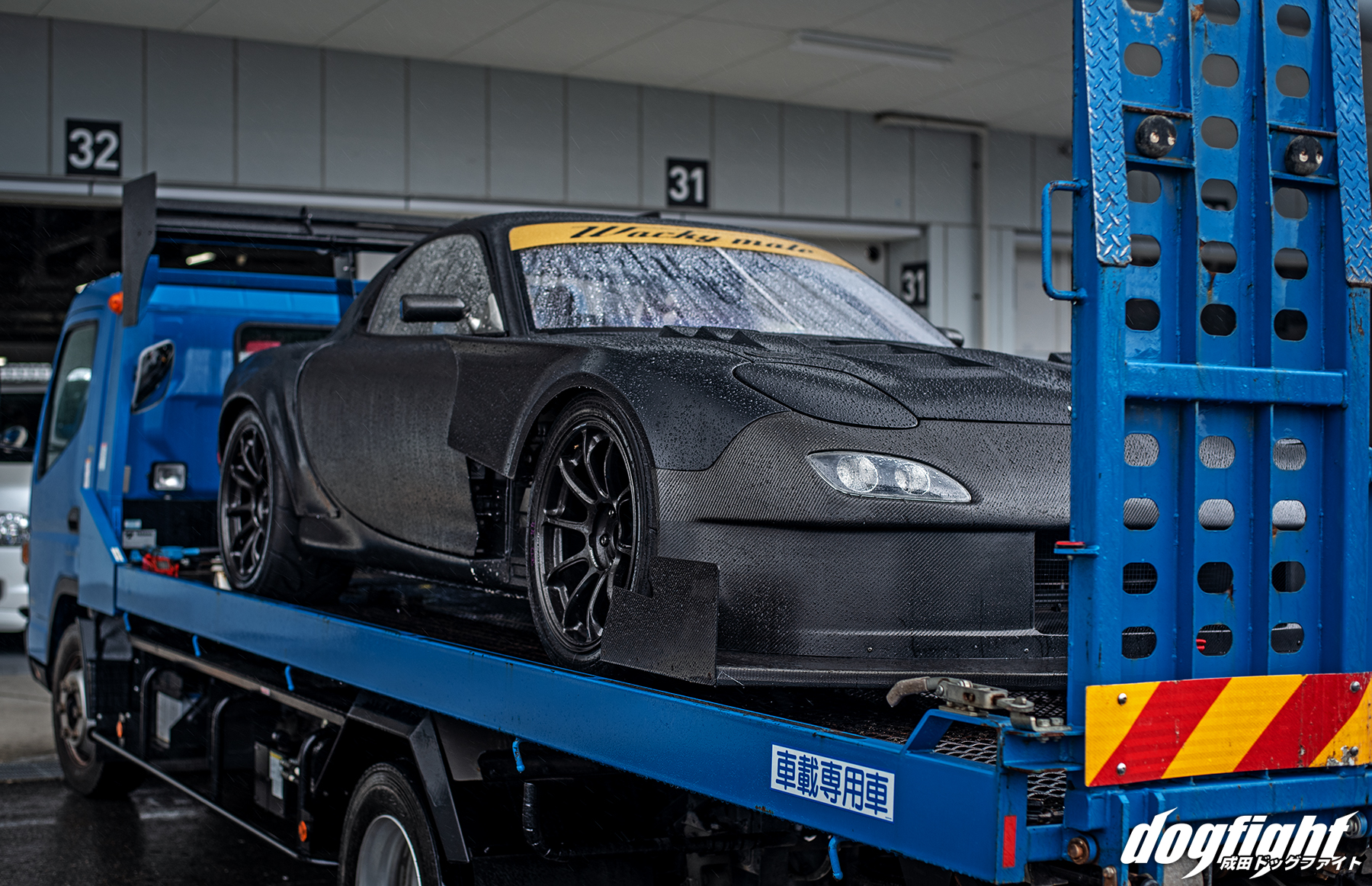 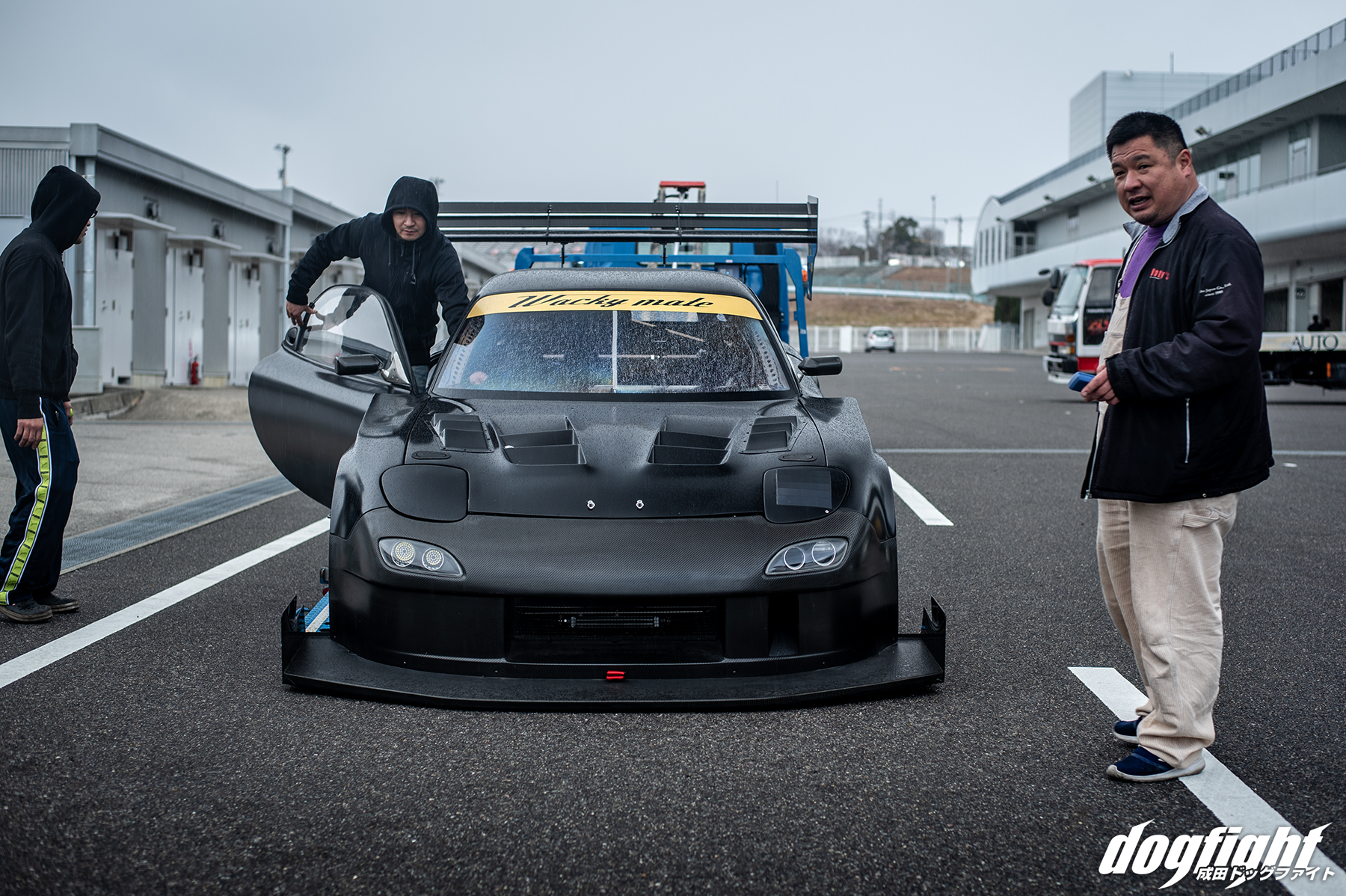 The car is truly a great mix driven by Kengo’s ideals – realized by both Wacky Mate and his brother.  Another notable item that Under also contributed to are the custom rear knuckles which allow the FD a very specific alignment. 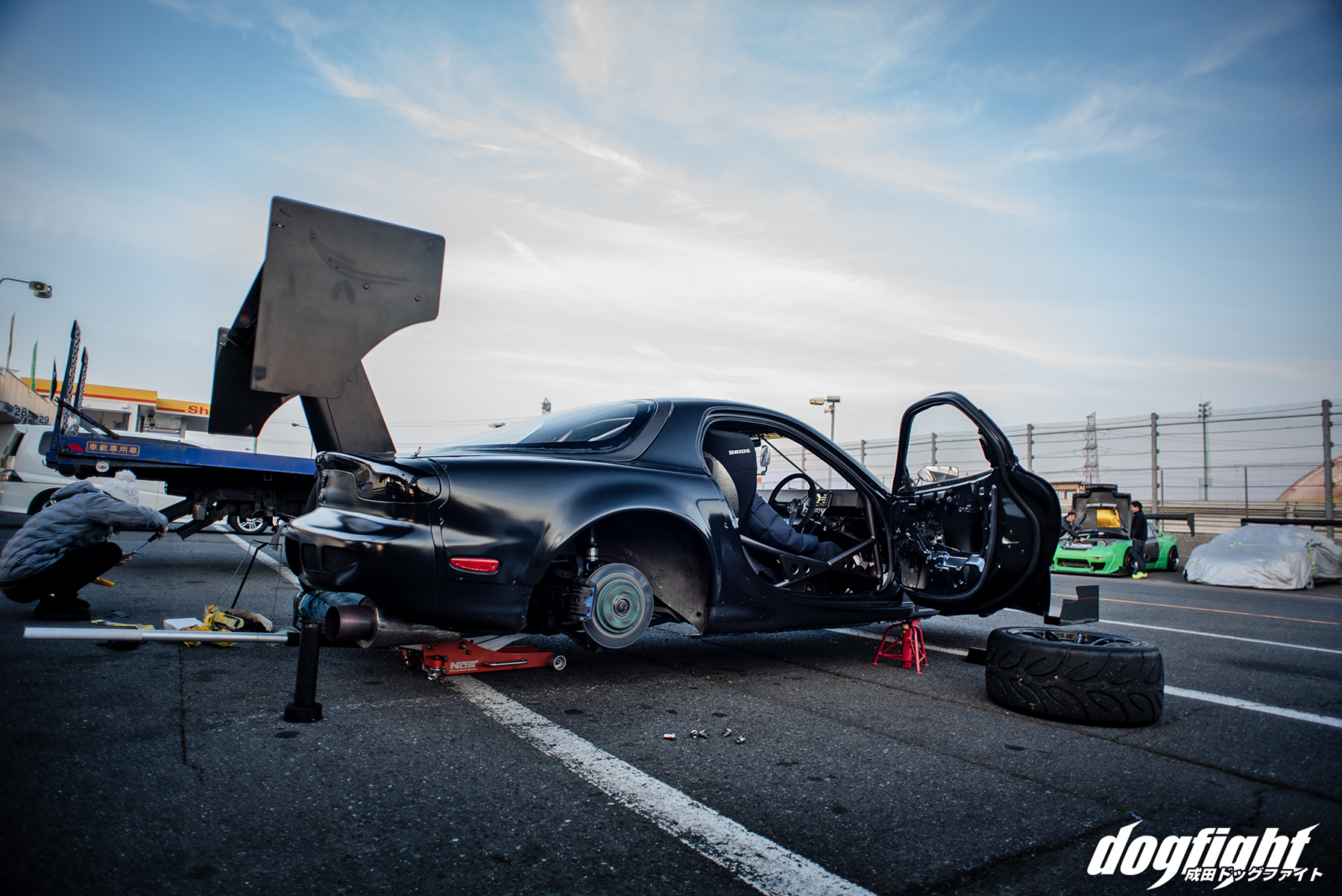 As far as the chassis goes, Wacky Mate went to extremes in reducing the weight while still maintaining a structurally sound and safe platform.  The interior was completely stripped and stitch-welded, and a custom cage with door bars was welded in place.  To help counteract the weight of the cage, plexiglass units have replaced the glass throughout the car, and a fiberglass hatch takes the place of the incredibly heavy stock part.  Their hard work has brought the weight of the car down to around 1,050 kilograms (2300 pounds). 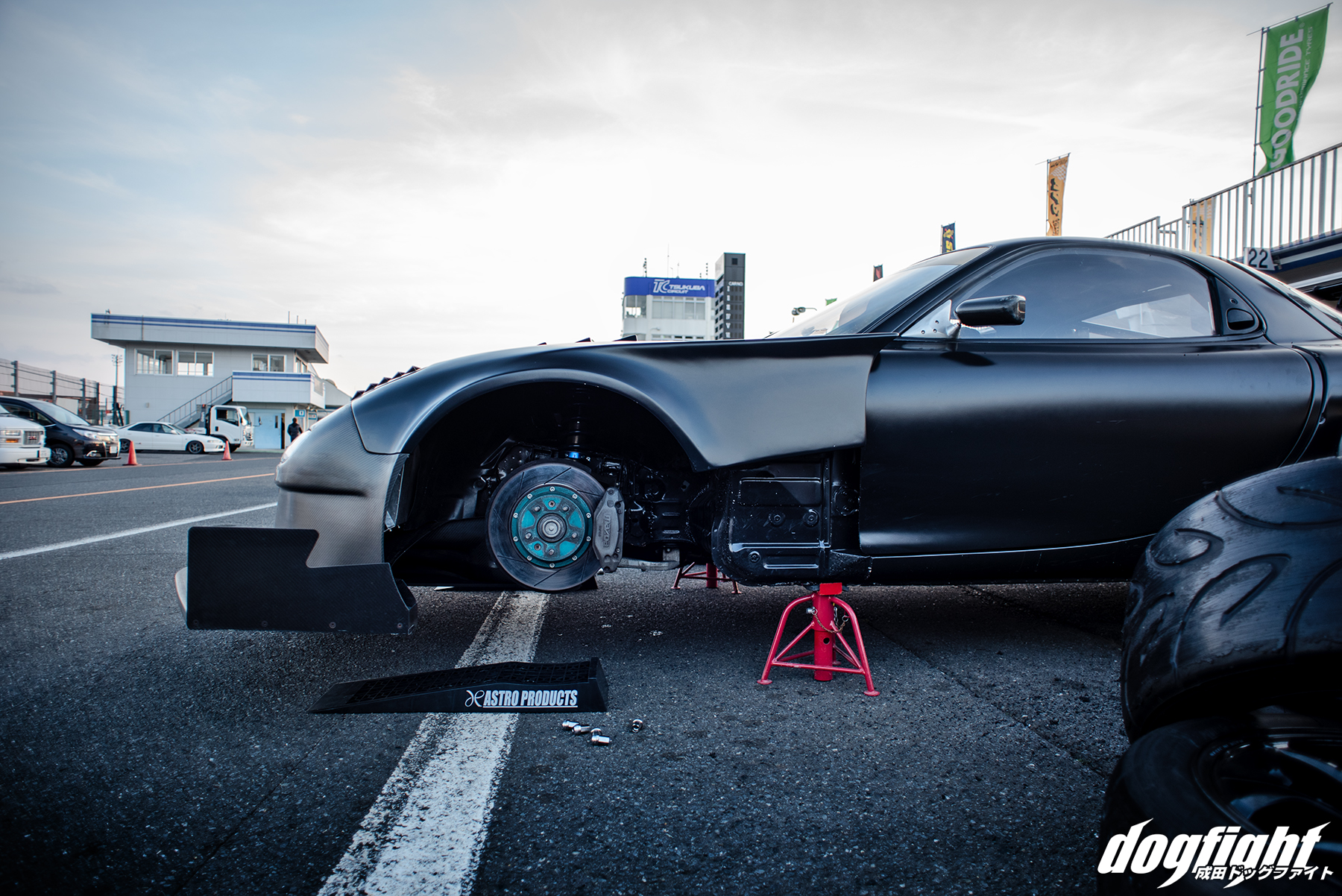 Utilizing a tune with E85 (ethanol fuel) and a Motec M800 unit, the team at WM has been able to capitalize on the rotary’s ability to make power.  With the power levels peaked around 350 horsepower, which is probably the most Wacky Mate was comfortable with boosting up the OE engine, there has yet to be a need to upgrade brakes – for now Kengo says the standard calipers with upgraded rotors and pads are adequate.

A custom fuel tank and collector, both SPL pieces from WM, are mounted in the trunk of the FD. 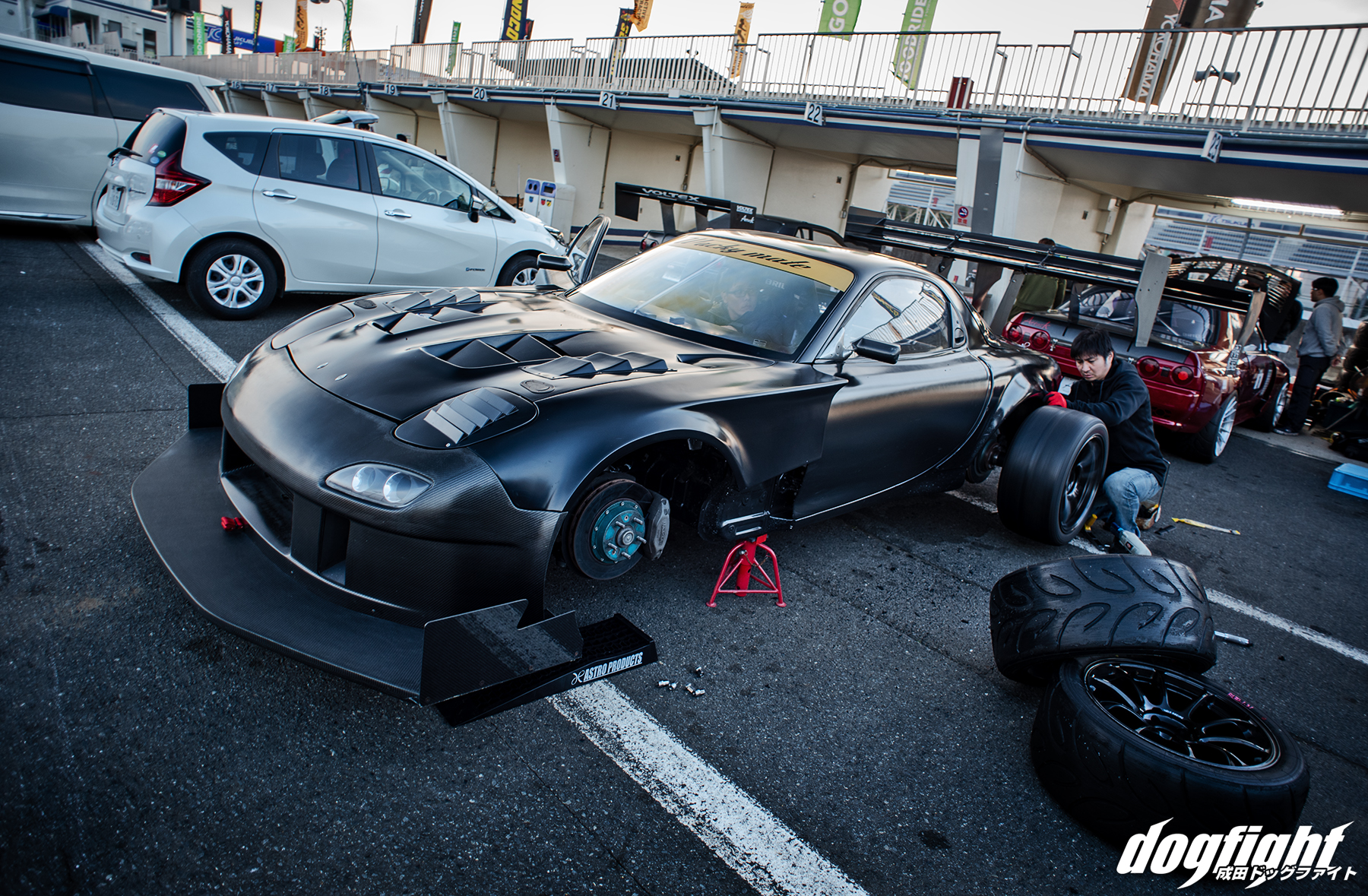 Mated to the 13B is a Holinger sequential transmission; a modification that is quickly becoming the standard in serious Japanese competitors. 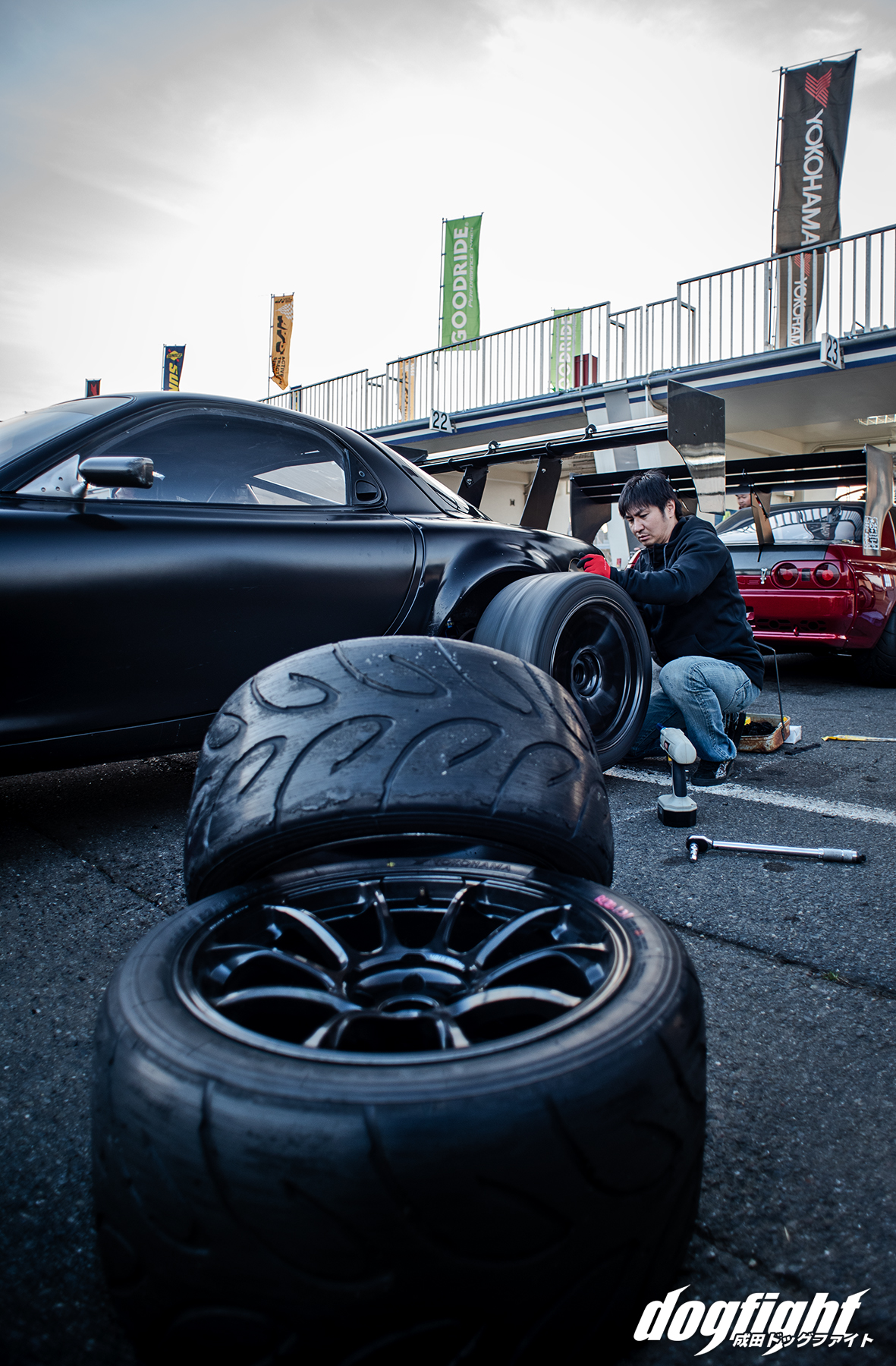 The Rays ZE40’s are a perfect fit for the car (also makes me even more excited to get mine on my car). 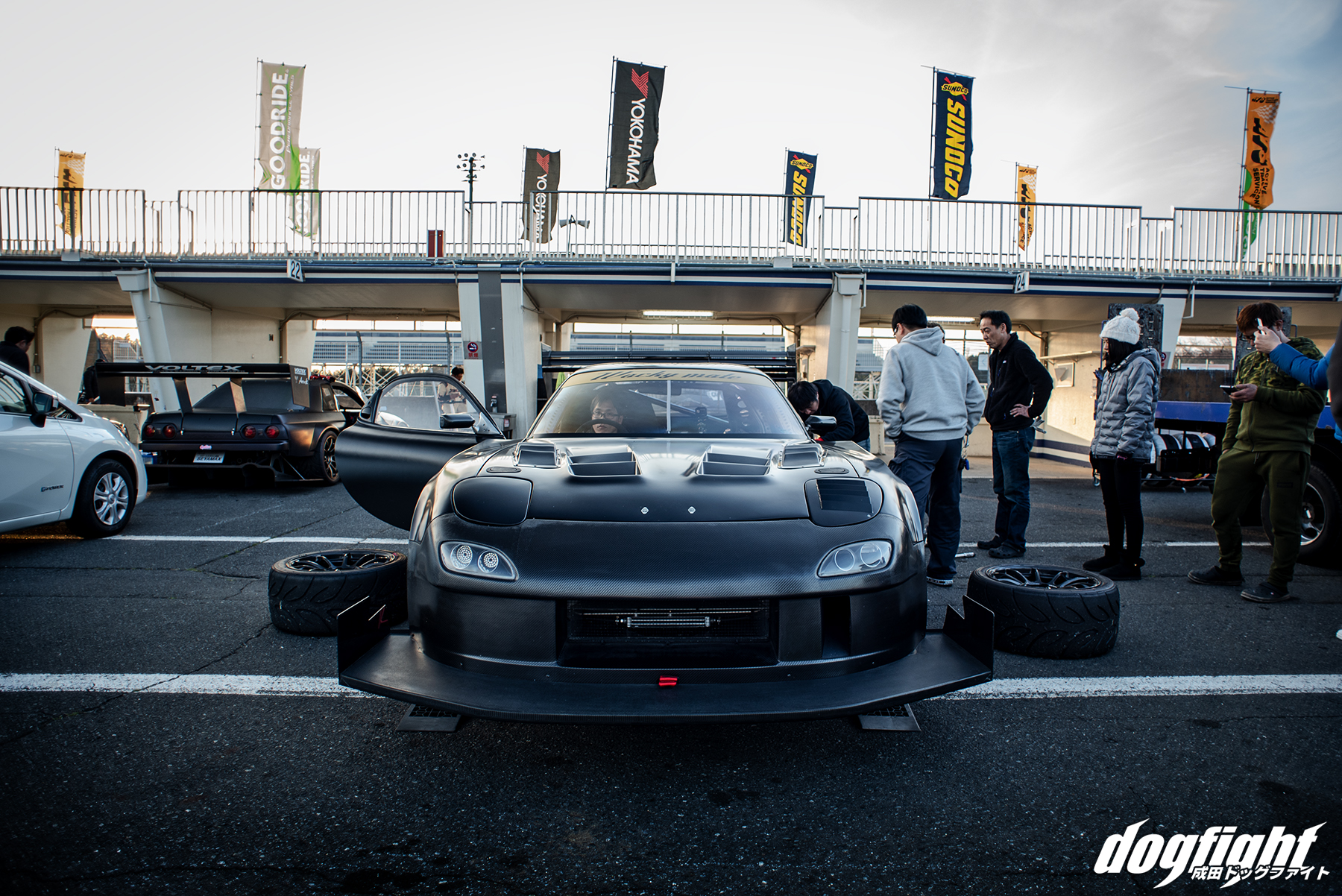 To date the car hasn’t had much testing in it’s current form, as it is a very new build.  A 59.356 is all that Kengo could garner in last month’s event at TC2000.  However, more importantly there have been a few issues that prevented them from putting down a time at the event at Suzuka.  According to Kengo, the team at Wacky Mate has run into a couple issues with the new motor.  He is now left with the decision for 2020 to stay with the 2 rotor, or make the upgrade to a 3 rotor.  He mentions that there is still a lot of factors on the table for deciding which route to take.

One of the factors is Under Suzuki developing more aero for the FD chassis this year, leading into 2021.

Whichever direction the team decides to move in, I know that they’ll be working to do the most with as little as possible.  A task that is both inherently difficult, as well as incredibly rewarding.  Enjoy the gallery 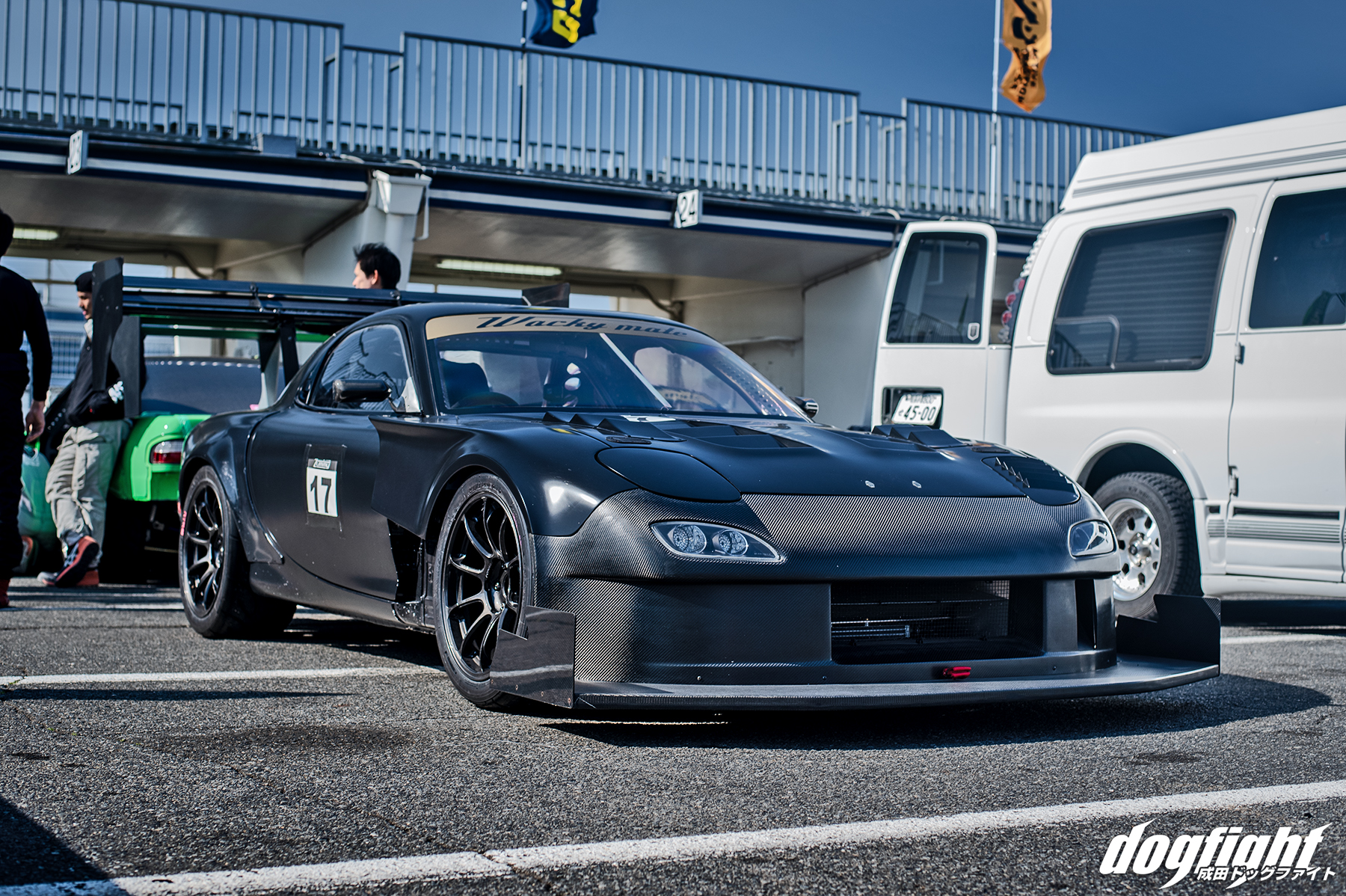 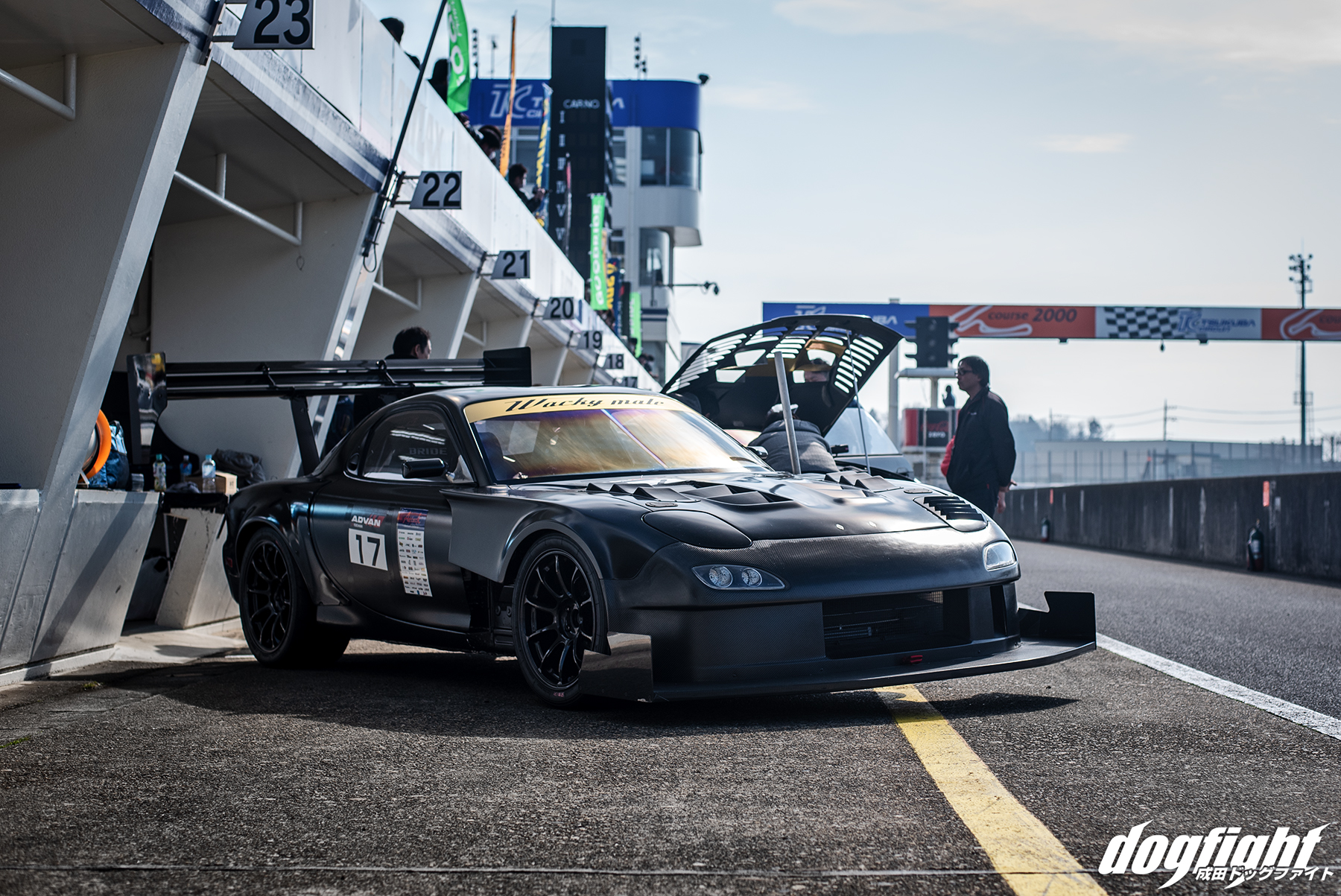 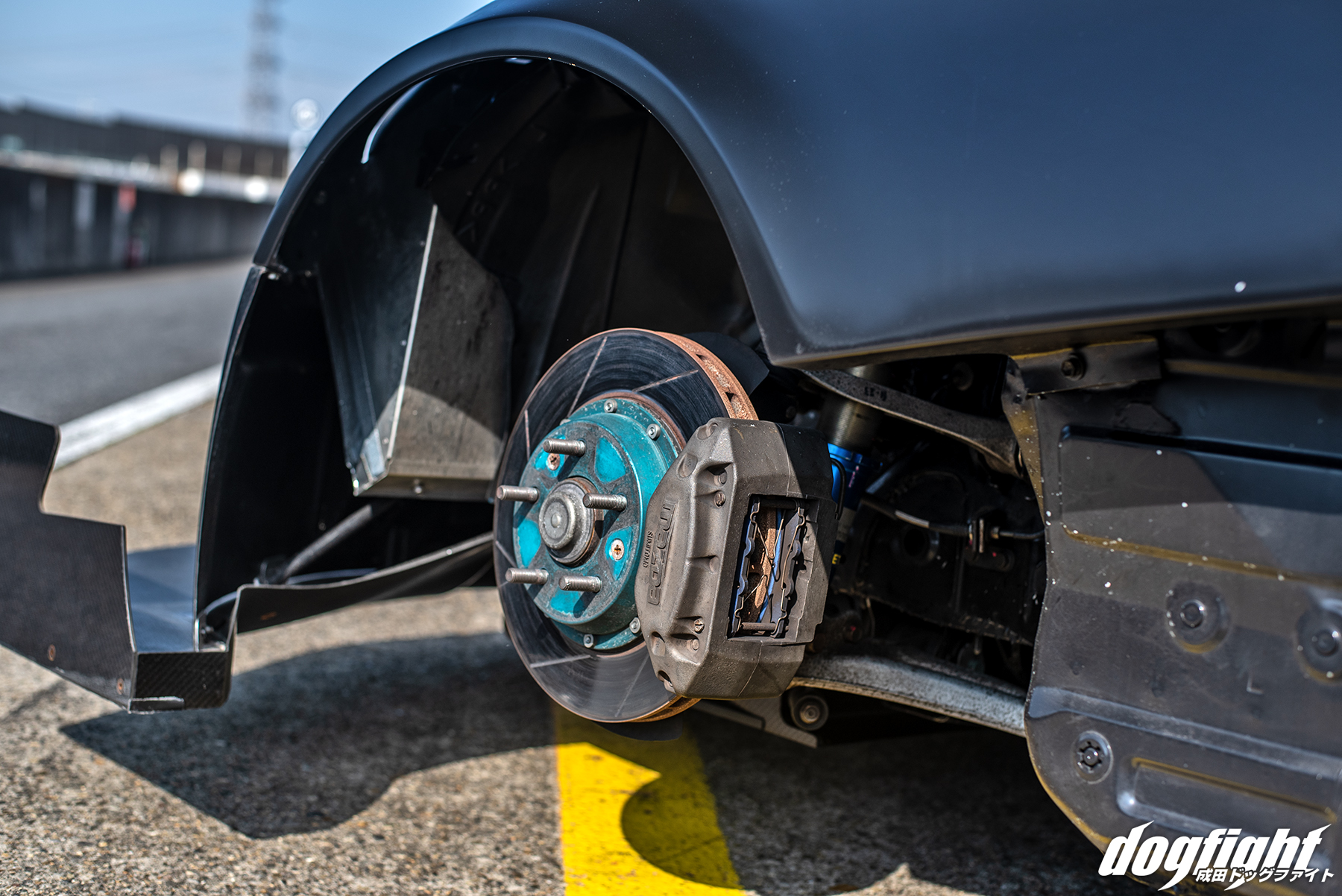 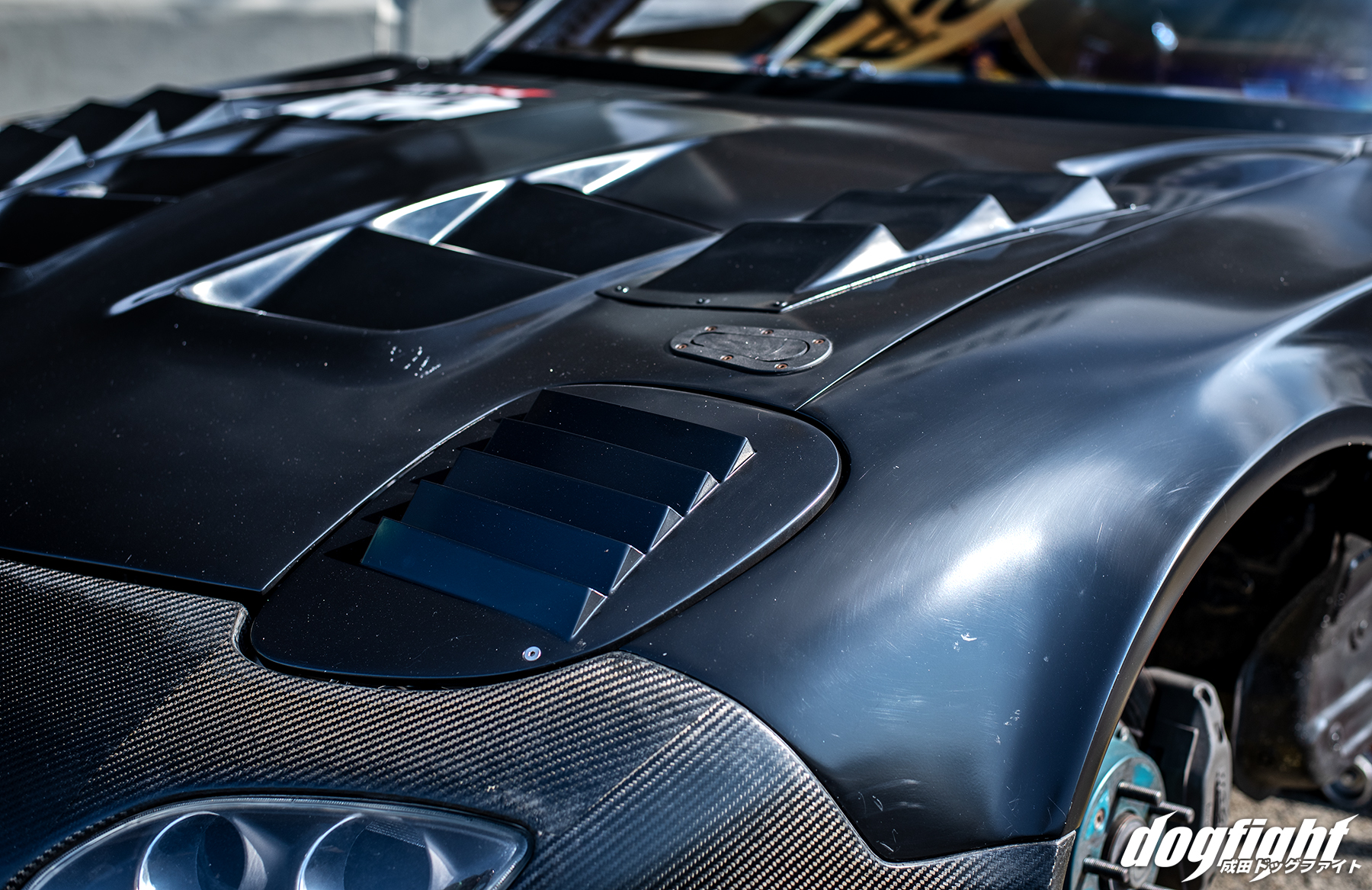 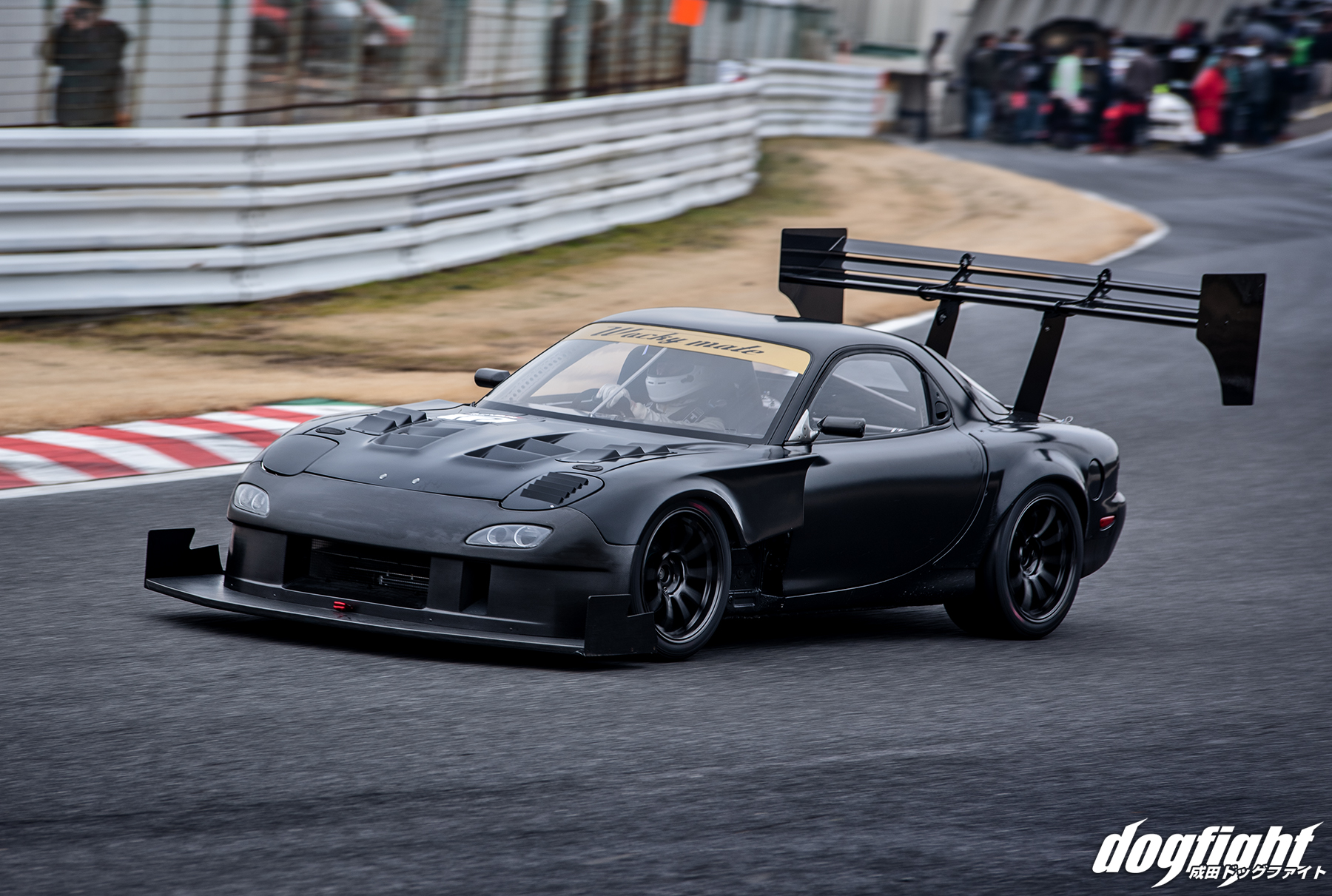 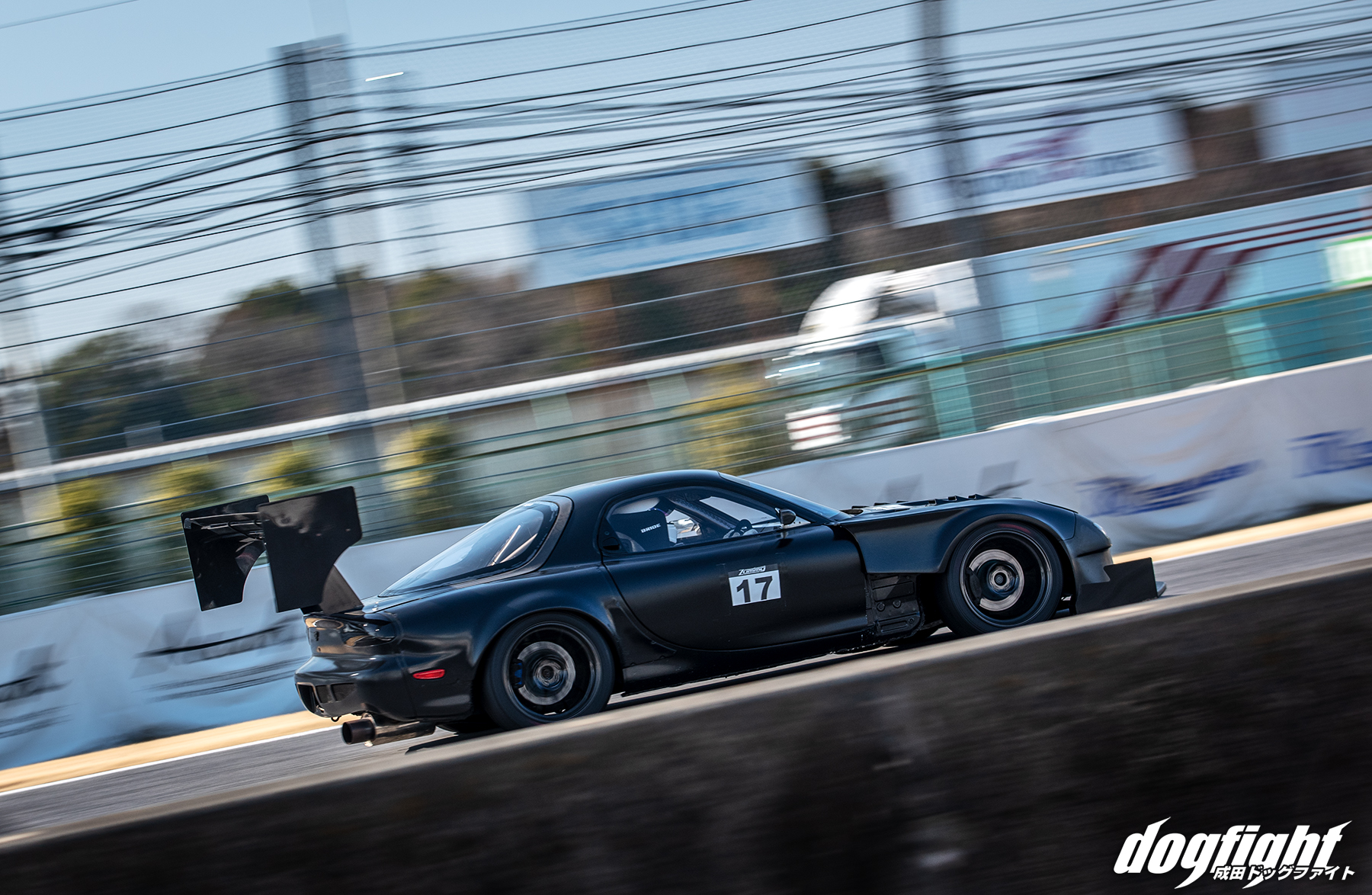 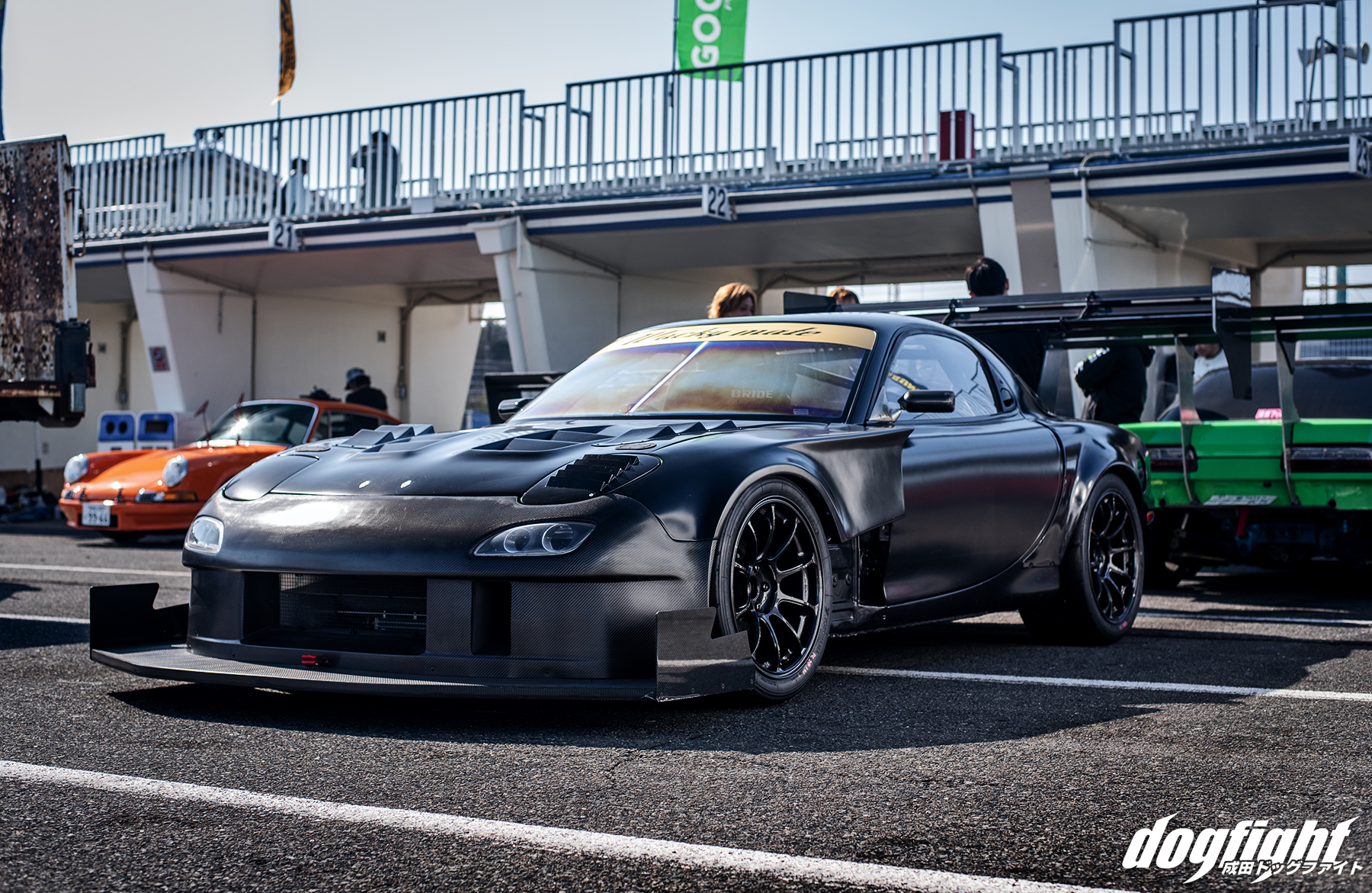 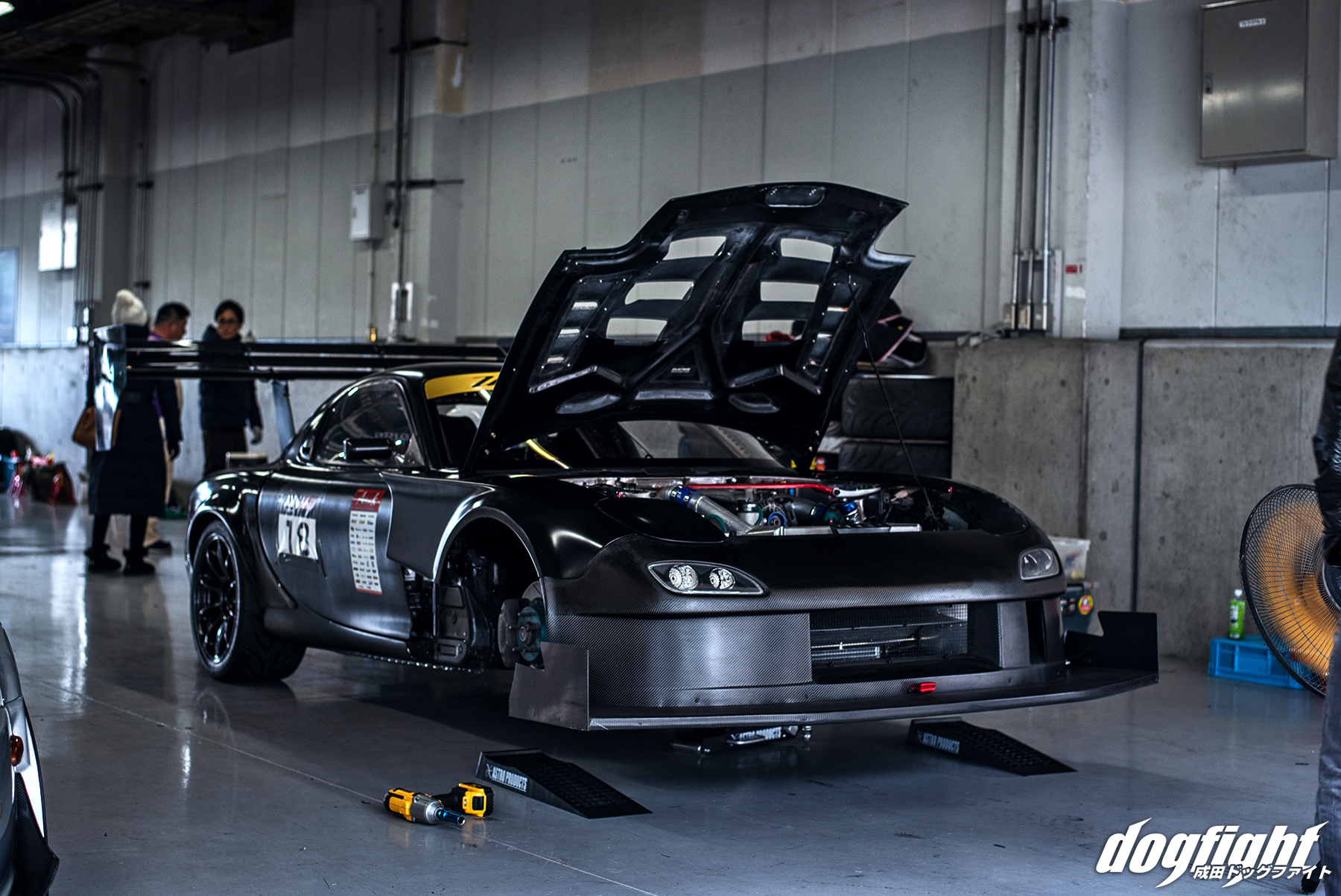 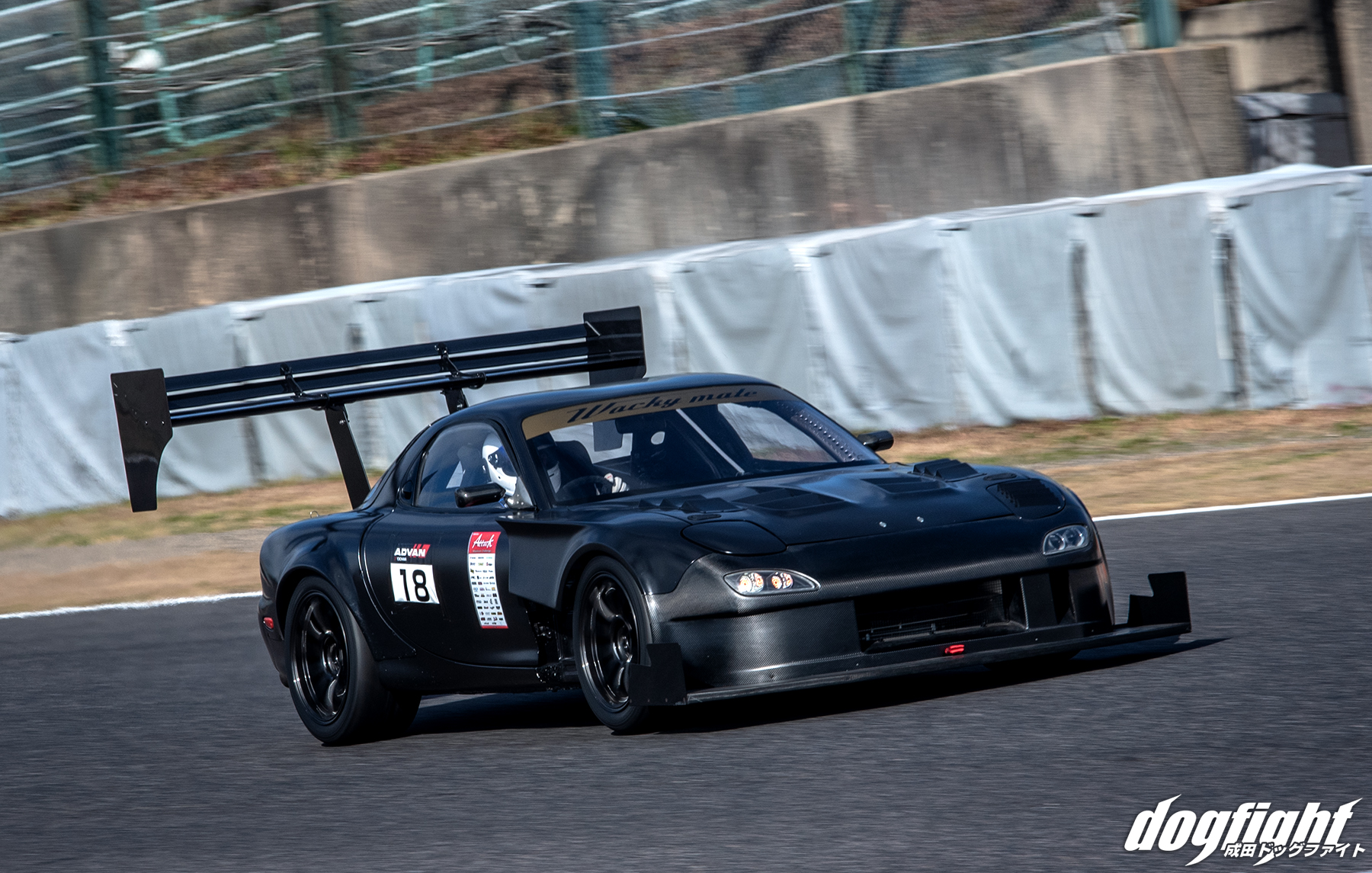 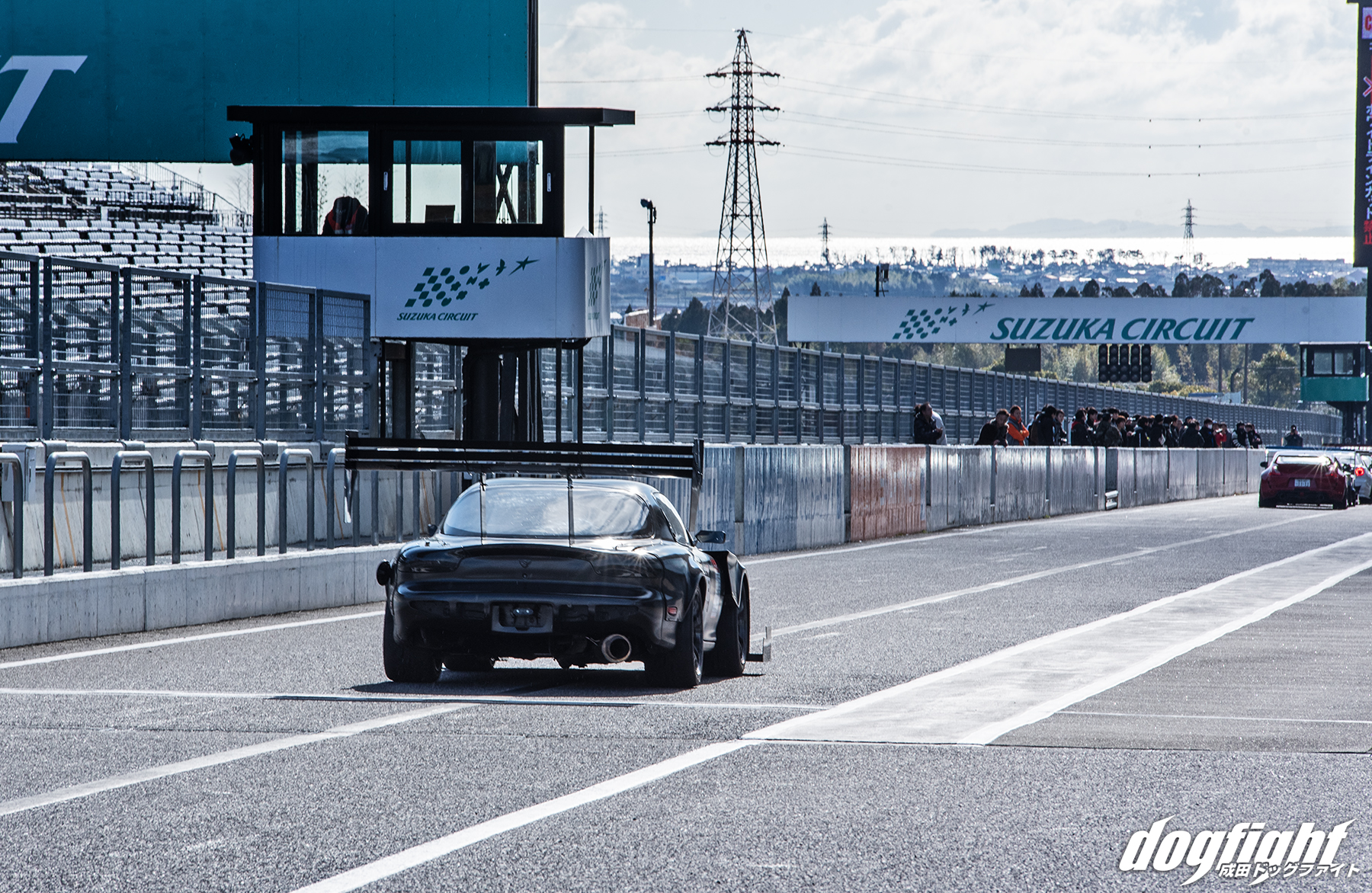