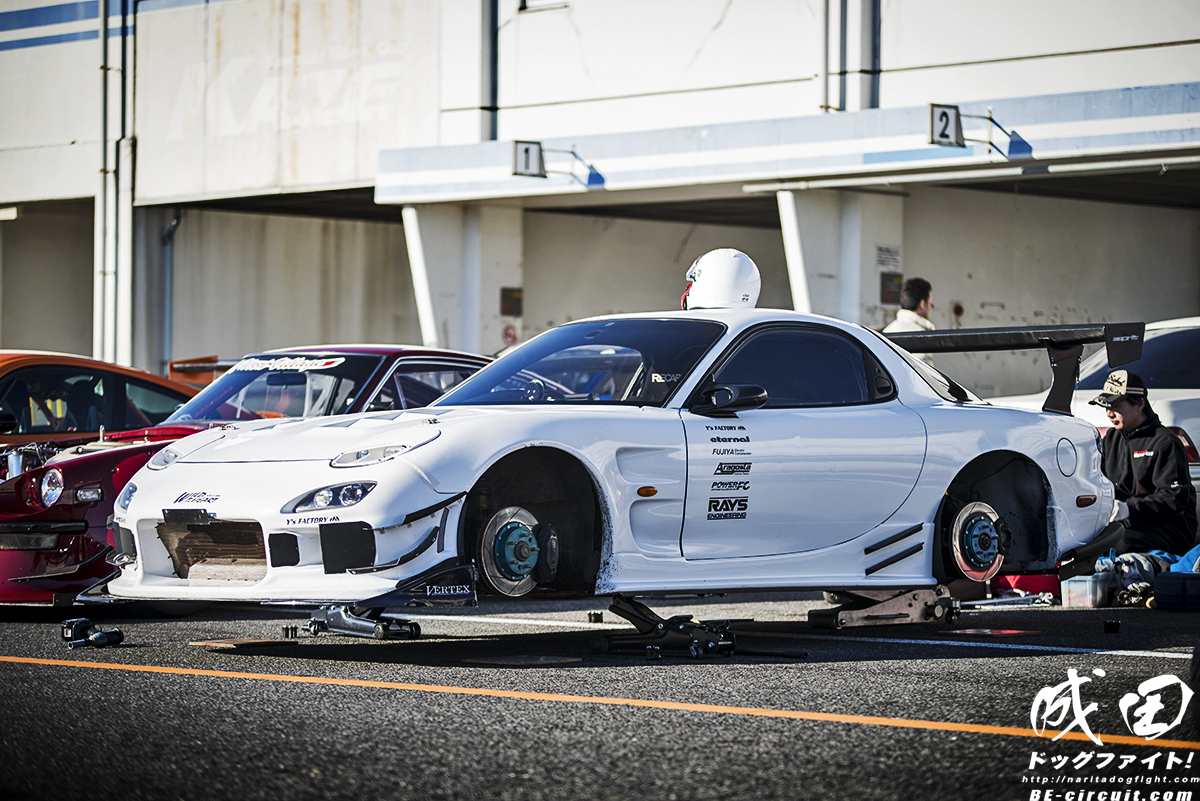 There is a feeling that some have experienced that is as nerve racking as it is exhilarating.  Some may crumble under it,  feed off of it; becoming stronger, faster.  A sort of pressure that brings out the best of us.  Some of us look for it, most avoid it.  A contender to the Evome series that we don’t see too often, on this day, went up against the greatest.  Throwing himself into a field of heavy hitters and veterans of Battle Evome, ‘Tommy’ feels this pressure, and uses it to push himself, and his FD, to the limit of attack. Although he is no stranger to Tsukuba, he has only entered in the Evome series a handful of times in the past, and for some reason get’s little exposure (which is beyond me).  As he combed over the many factors that must be taken in to account and not over looked before heading out to track, you could feel a sort of tension in the paddock, akin to a toned down F1 race.  Wheel and tire selection, pressure, checking the brakes, making sure engine fluids are proper, etc.  Clockwork to the veterans… As the morning sun shines on the line up of attack machines, we get a glimpse at the individuality of each machine.  Tommy, choosing a modified variation of Y’s Factory aero, with a variety of Vertex canards to make up the front end.  For mirrors, contrasted Super Ganadors, a staple of any FD.  R-Magic headlights providing an even more menacing look to the car.

As the contenders talk amongst themselves, the tension that was so prevalent upon arrival, begins to fade with friendly chit chat. Raised on three jacks, the FD looking more like a fighter jet than an automobile.  Here we get a good view of the Esprit rear wing handling the rear downforce for the RX7.  Even minimal gains in downforce are ideal, so side canards are utilized to gain just a bit more wherever he can.

But, as the time of attack nears, the pressure begins to build again… That familiar feeling comes into focus as they pull out of the hot pit and onto the proving grounds of TC2000.  In that moment, their senses embrace them, heightened beyond the usual capacity. Everything becomes so clear; every sight, every sound, every movement.  The fibers from the fabric in their gloves, pressing in to the ridges of the steering wheel; from there, a connection with the car forms, becoming focused solely on one thing… …the chance of personal greatness.  To achieve the fastest time possible.

As the Aragosta suspension floats through each corner, the air flowing over the body panels, the seconds tick by.

All conditions are no less than perfect, and from here the war wages within oneself.  The Aragosta suspension floats the FD seamlessly through each corner, as the 13B screamed Tommy to a fast lap of 59.311 seconds. An improvement on the last time around, but not yet the maximum.

While, up to a point, modifying the car for improvement is somewhat easy; it is finding the inner drive that allows us to reach the limit of what can be done on circuit.  I’m excited to see what changes he makes for the events in the future to compete against the heavy hitter FD’s that are more familiar in the series.